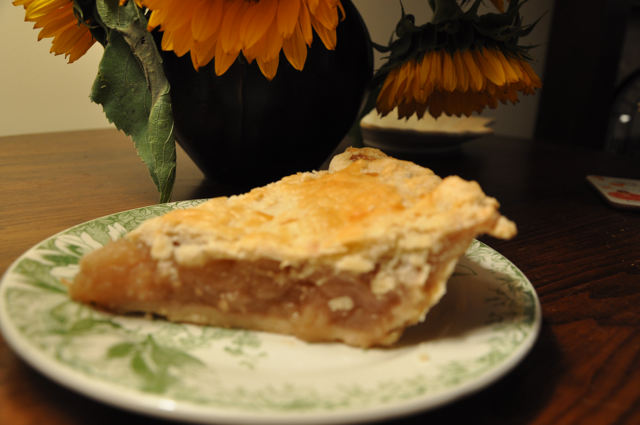 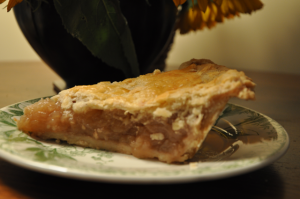 Contrary to popular belief, making pastry is neither difficult or complicated but it is messy, so consider making enough for several pies while you’re at it, and freezing some for later use. The freezing process actually makes the pastry even flakier when baked, a definite advantage.

Here is the recipe I got from a dear friend about a million years ago, and I believe it originally came from the back of the Crisco box.

In a large bowl, combine the flour, salt and brown sugar.  Cut the shortening into cubes before adding it to the flour.  Blend the flour and shortening, using your fingers or a pastry cutter, until the mixture is a crumbly texture with the largest lump being about the size of a pea.

In a medium bowl, whisk the egg, add the water, then the vinegar.  Make a well in the middle of the dry ingredients, and drizzle the liquids, lightly combining the mixture with your fingers or a fork until it comes together in a soft ball.  Sprinkle a little more water as needed to moisten the whole.  The ball should stay together when lightly squeezed.   Try not to over-handle it, but don’t be scared of it, either.

Chill the pastry for about 30 minutes before rolling it out as desired.  (I have skipped this step in a pinch, with no dire consequences). Flour the rolling surface and the rolling pin generously. Using a cold surface, like granite, keeps the pastry colder, which makes it easier to handle. Lift and rotate the pastry from time to time between rolls to get an even thickness and shape, and dust lightly with flour if it gets sticky.  When you’ve reached your desired shape & thickness, fold the crust in half lightly to facilitate its transport to the pie plate.  Crimp the edges of the crust between the thumb of one hand and the index finger of your other hand to get a nice curly edge to the crust.

You should have enough pastry for double crusts for two shallow 9” pie plates, or one double-crust deep-dish 11” ceramic pie plate plus one 9” open tart with a lattice top.

Tip:  Choose your pie plate & fruit based on the type of pie you want to make: