We are settled in Bath now for about a week, and have begun visiting some of the splendid country house estates with which England is so richly endowed.  Famous for its breathtaking gardens, Stourhead was our first destination.

The Palladian mansion was built in 1717 by Henry Hoare I, son of Richard Hoare, who was a wealthy banker. Hoare’s bank is the only privately owned bank still in operation in England today. 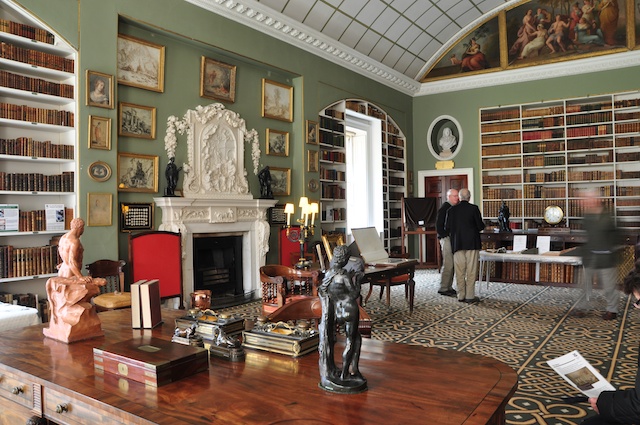 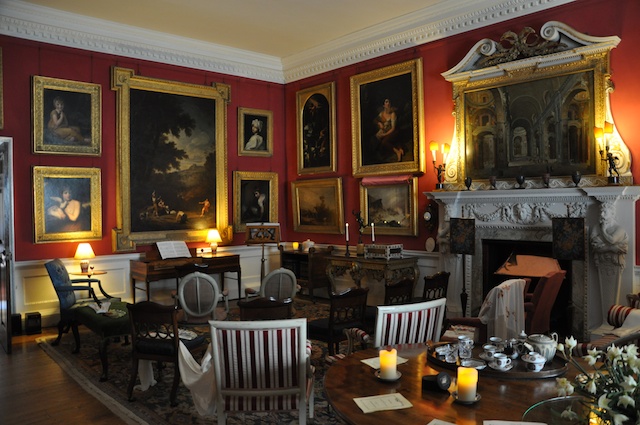 The numerous National Trust volunteers were, as always, friendly and informative.  We toured the main floor, which is decorated in the sumptuous rich colours of the Regency period.  The two wings of the house, comprising the library and the picture gallery, were added at a later period.  The music room is arranged as it would have been for a musical evening. 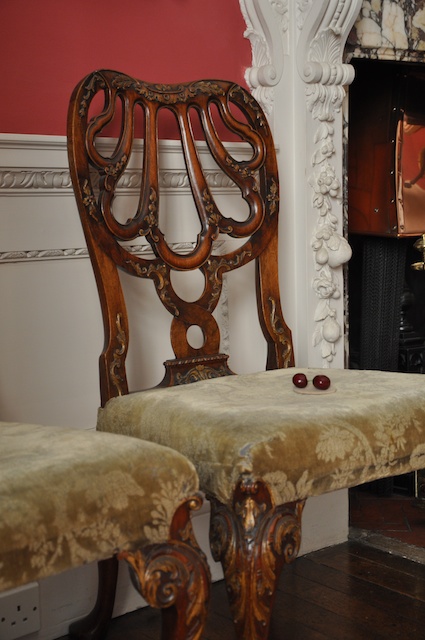 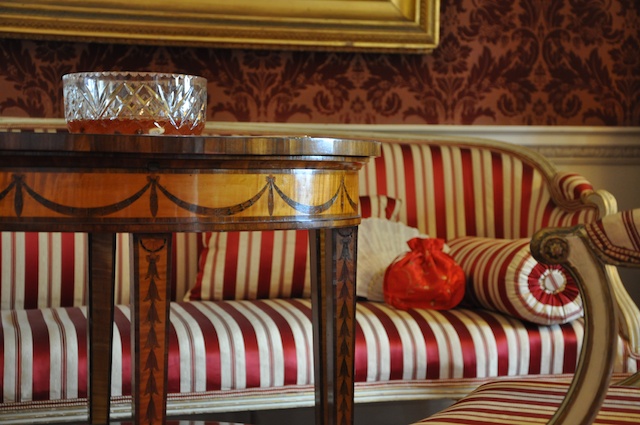 A lot of the furniture was commissioned specifically for the house, including many Chippendale chairs,  tables, and jardinieres, at very considerable expense for the time.  The dining room chairs, of which there are ten side chairs and two carvers, were from an earlier period, and probably originally gilded.  I particularly loved the marquetry work on these two half-moon tables. 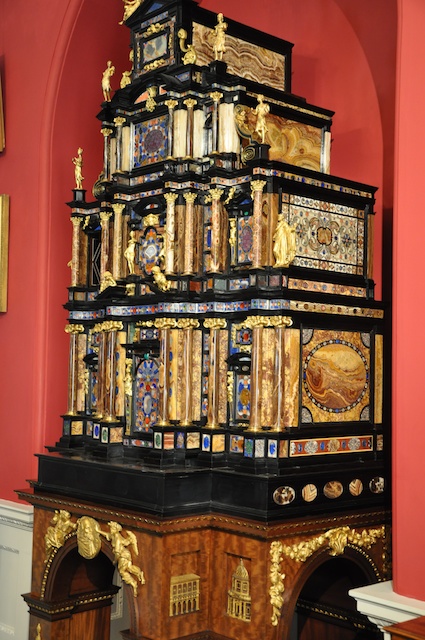 Typical of the time, the Hoare family were great collectors. The Pope’s cabinet, recently restored, was built for a 16th century pope, and is covered with marble, alabaster and semi-precious stones such as lapis lazuli.  Behind the many doors are hundreds of little compartments, some of them so secret that they were found to contain forgotten objects when the cabinet was disassembled for restoration. 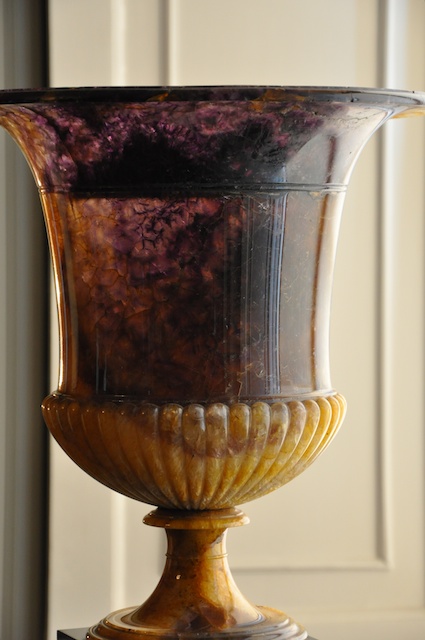 This beautiful urn, made of Derbyshire Blue John sits in a window in the Picture Gallery.  The name is likely a corruption of bleu-jaune, meaning ‘blue-yellow’.  It’s a semi-precious mineral whose translucent qualities are revealed when it is carved and polished. 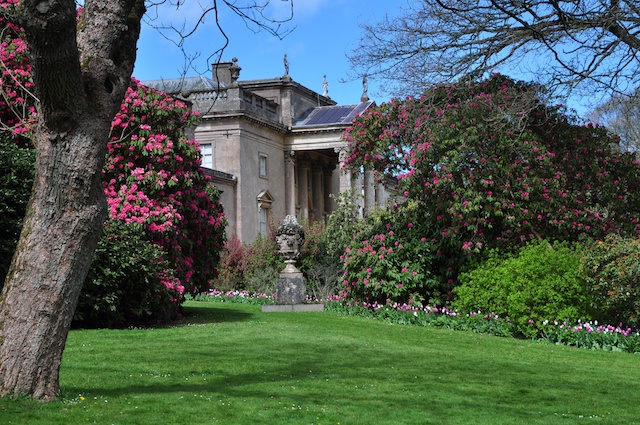 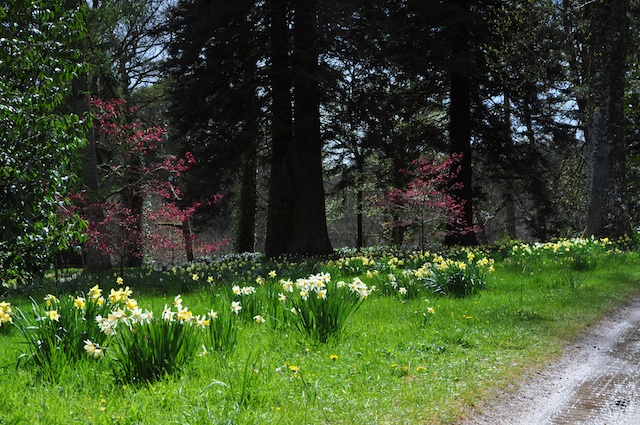 The weather, which had started out very promisingly that morning, rapidly turned.  Showers greeted us when we left the house to begin touring the gardens.  We had (very stupidly) neglected to bring an umbrella, so a quick trip to the National Trust shop rectified that omission.  Showers and sunshine came and went in rapid succession as we took the two-mile walk through the extensive gardens. 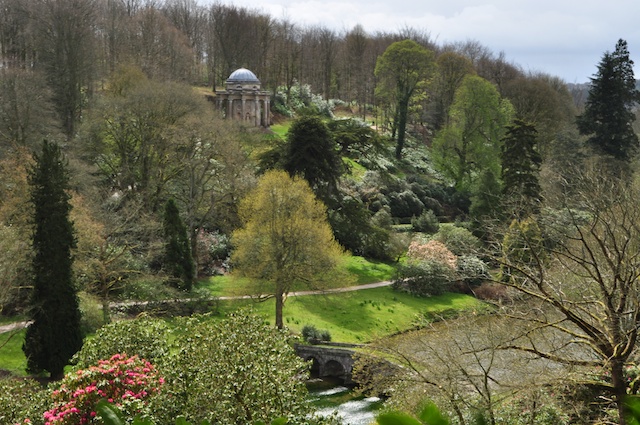 Stourhead’s gardens contain many ornamental buildings to draw the eye.  The Temple of Apollo and the Palladian bridge are both visible from this vantage point. 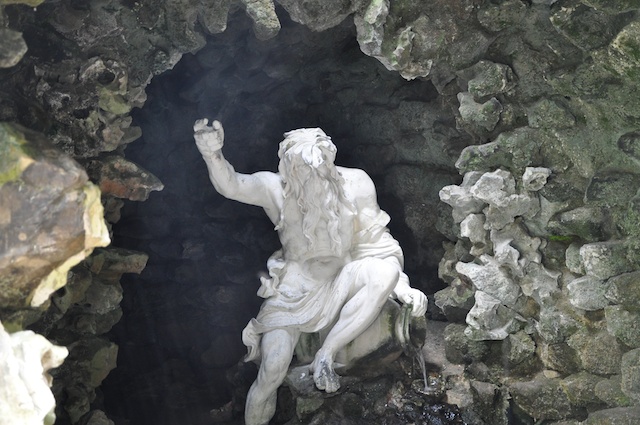 We took refuge in one of the grottos during a particularly heavy downpour and were delighted to find Neptune waving a welcome. 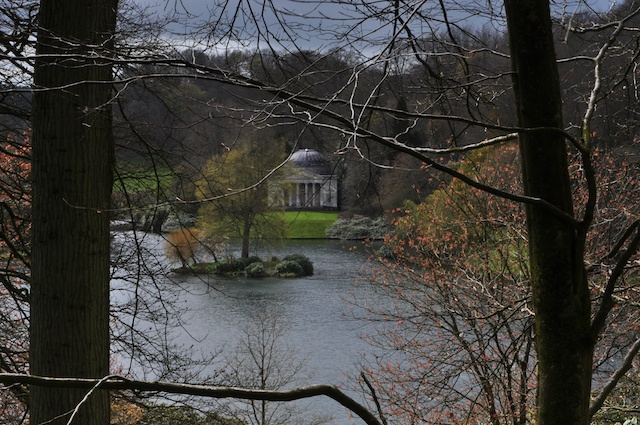 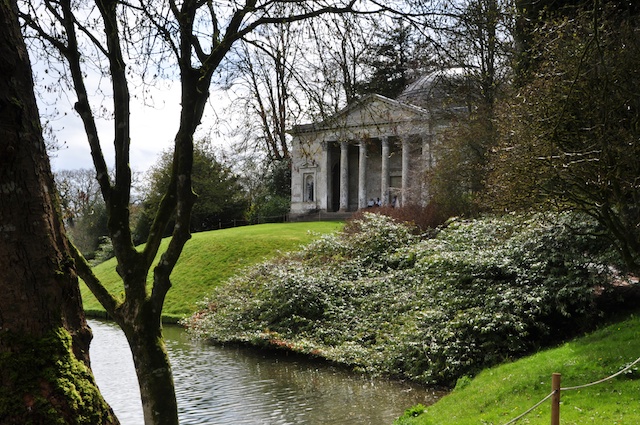 The Pantheon beckoned from a distance, and proved incredibly beautiful when we got closer. 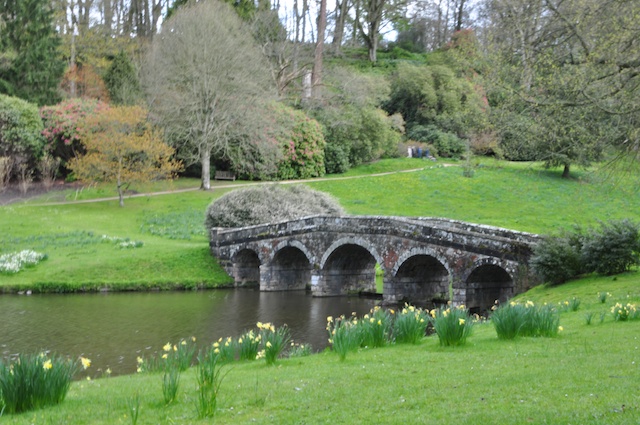 Rain was threatening once more as we took a last, lingering look at the Palladian bridge, packed up the camera gear and headed for a warming cup of tea at the Spread Eagle Inn, in the valley of the garden, before heading for Salisbury Cathedral.