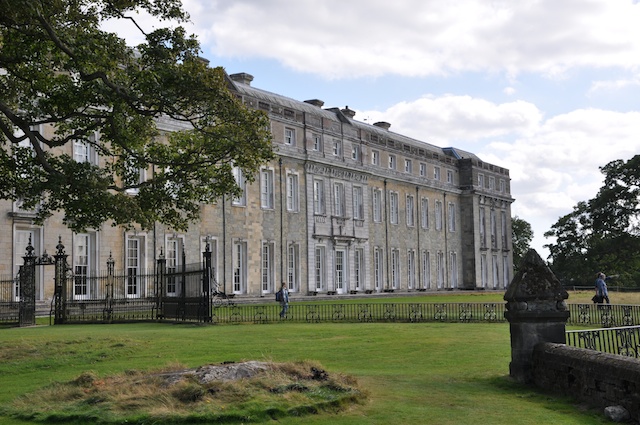 Petworth House in West Sussex,  England. is a late 17th century mansion on a site previously occupied by a fortified manor house. The original estate was a royal gift from the widow of Henry I to her brother Jocelin de Louvain, who soon after married into the Percy family of northern England. Petworth was originally intended for occasional use, however it became  a permanent home to the Percys in the late 1500’s after Elizabeth I grew suspicious of their allegiance to Mary, Queen of Scots and confined the family to the south. 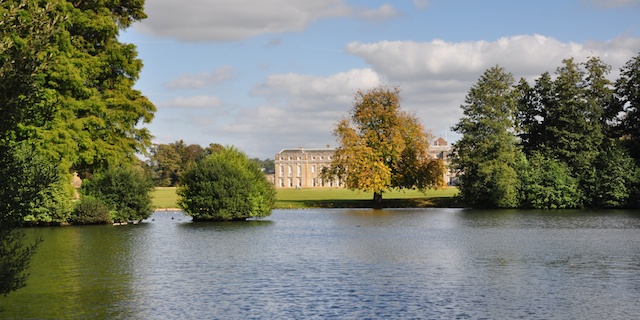 It stands in Petworth Park, a huge landscaped park (about 700 acres) designed by Sir Lancelot ‘Capability’ Brown. Petworth Park is one of the more famous parks in England, largely because it was frequently painted by Turner. 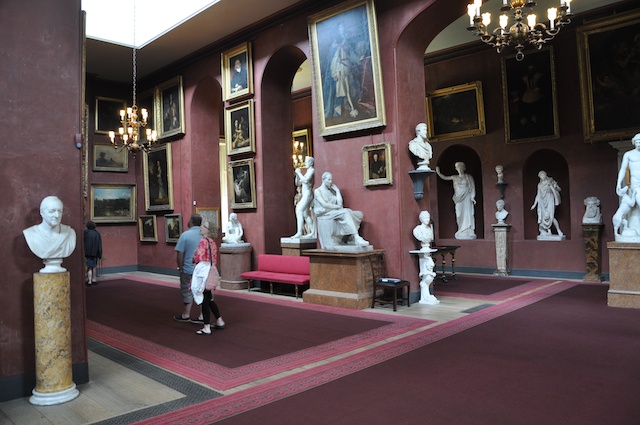 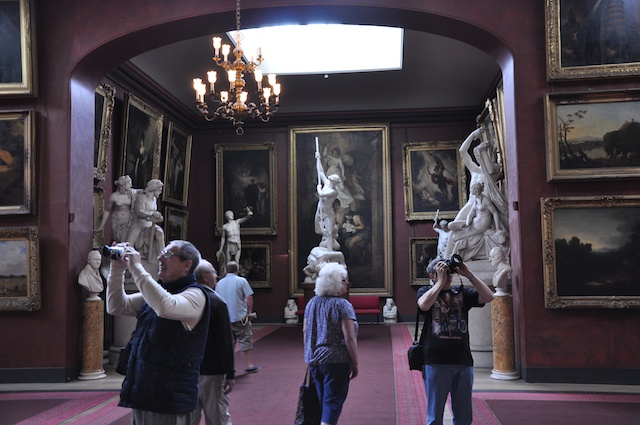 The orientation of the house is on a north/south axis, rendering it somewhat dark and cold. I suspect this was due to its original purpose of fortification, perhaps at the expense of graciousness.  The North Galleries were tacked on to the north end of the house in two stages, and house an large and important collection of paintings and sculptures, including 19 oil paintings by J. M. W. Turner (some owned by the family, some by Tate Britain), who was a regular visitor to Petworth and  paintings by Van Dyck.  The galleries are lit by two rather awkward skylights. 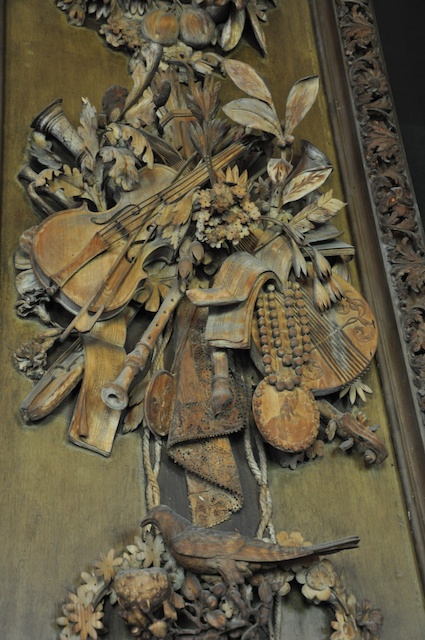 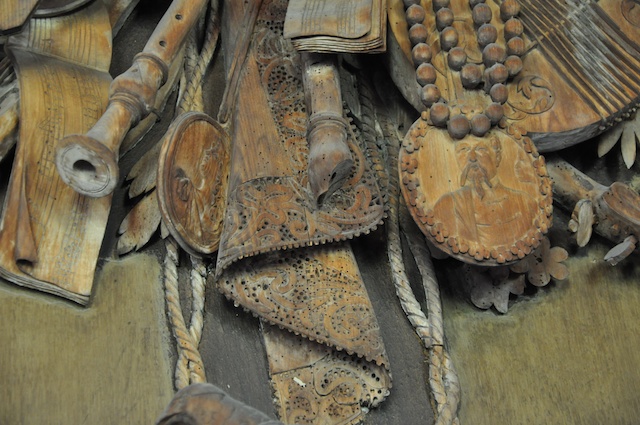 The Oak room is extensively covered in delicate limewood carvings by Grinling Gibbons. Originally, these carvings would have been a silvery white, contrasting beautifully with the dark oak panelling beneath. Gibbons’ work is renowned for the lifelike quality of the flora & fauna and lacework as shown in this example. 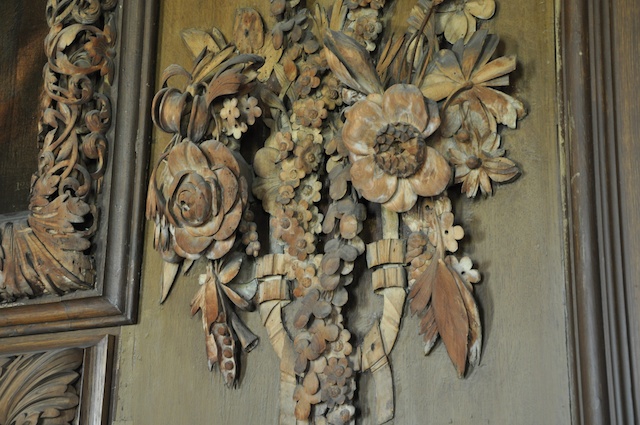 Legend has it that Grinling Gibbons always included a couple of pea pods somewhere in his carvings for private commissions. If he had been paid, the pods were open, showing a row of plump peas.  If he was not paid, the pea pods were closed.  You will be happy to note the open pea pods shown in the pictures above. 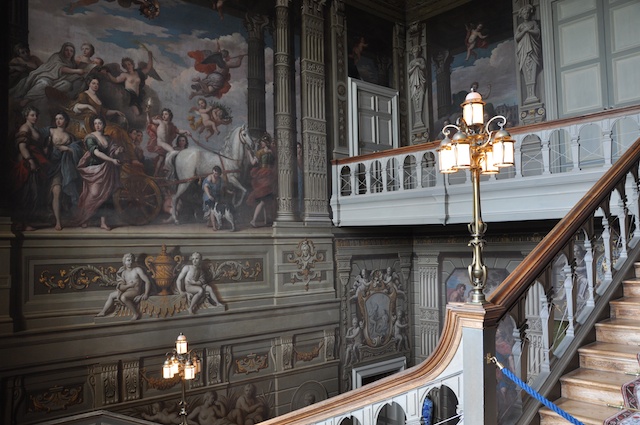 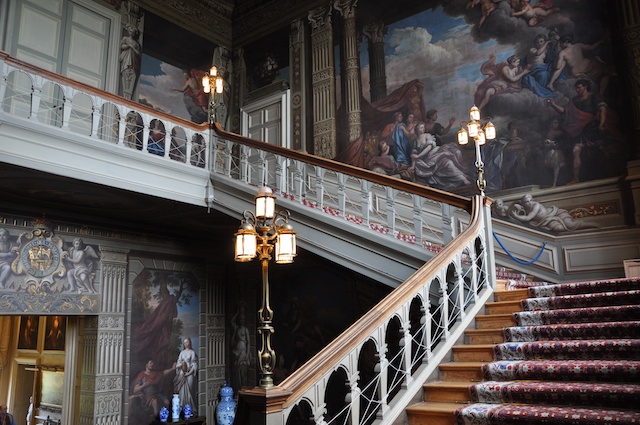 In 1682 heiress Elizabeth Percy, who at 16 had already been twice widowed, married Charles Seymour the 6th Duke of Somerset, a union that created one of the wealthiest couples in England. Due to his arrogance, Charles was known as the  “Proud Duke” and he was the driving force behind the rebuilding of Petworth in the grand Baroque style evident today, as illustrated by the grand staircase. 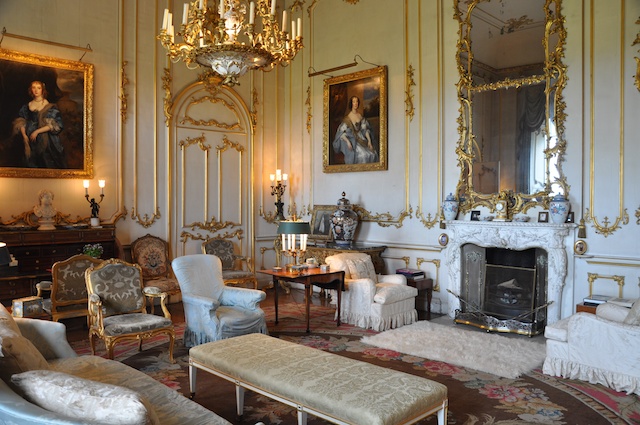 The house has a number of beautiful rooms, such as the white drawing room shown here. 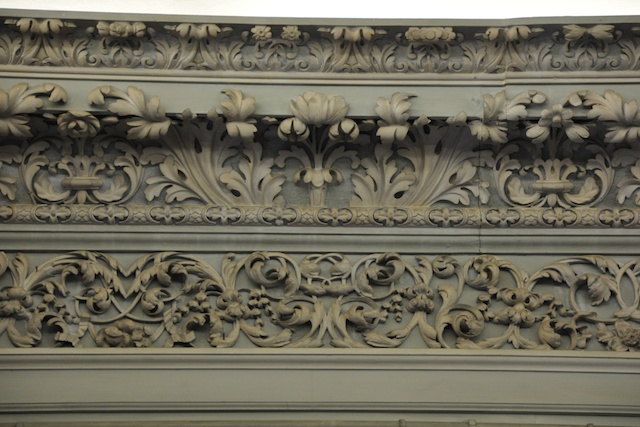 The detail in the carved stone crown moldings is incredible. They are often taken for cast plaster, but no! 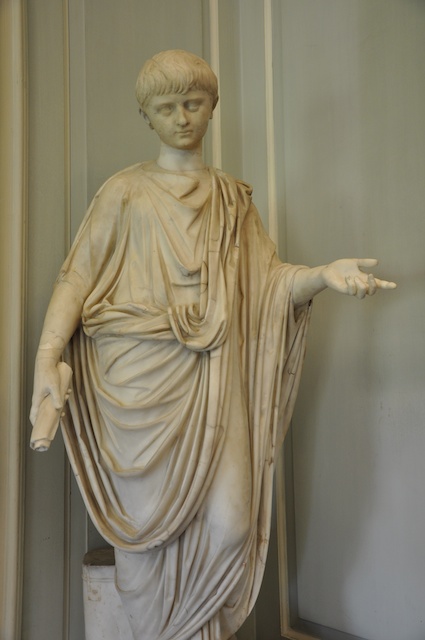 The art collection includes an ancient Roman statue of bad old Nero as a boy.  This statue is a rare find as most of the statues of Nero were destroyed after his popularity waned, so to speak. 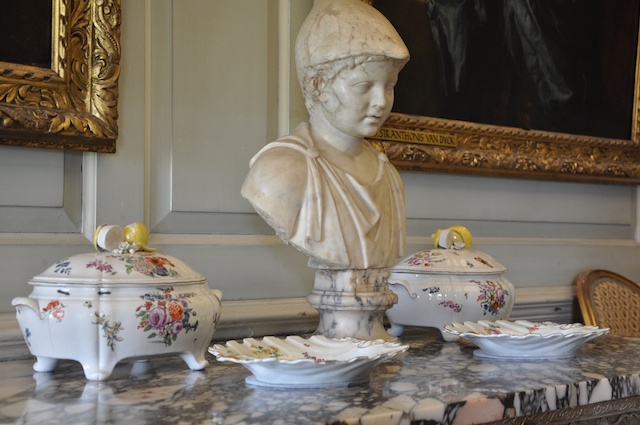 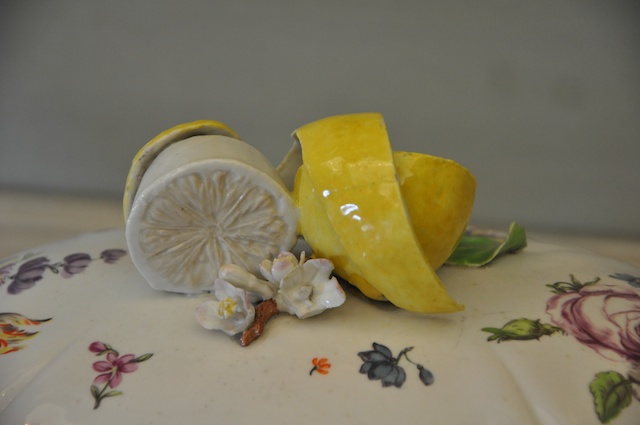 The china collection includes some beautiful Meissen pieces including this soup tureen with the lemon finial handle on the tureen. 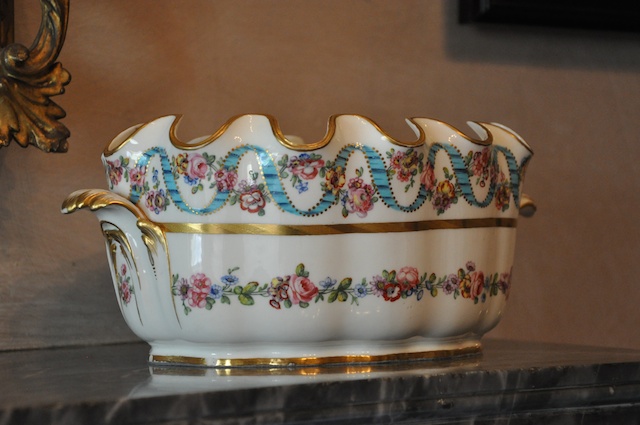 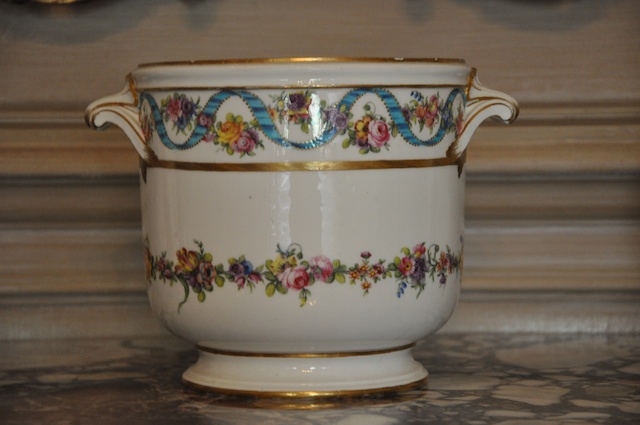 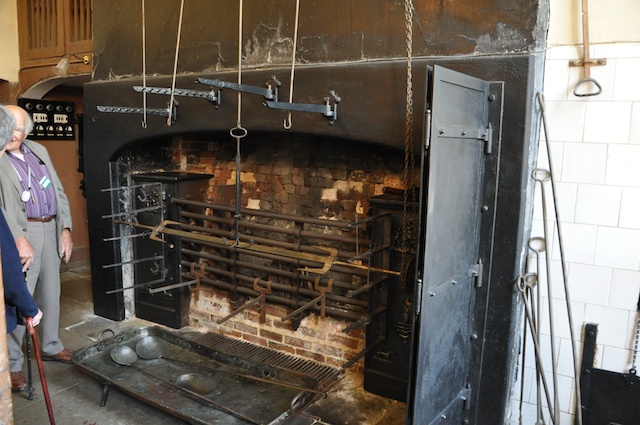 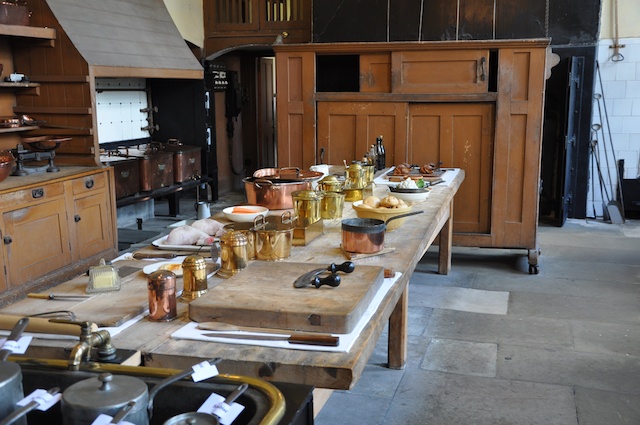 While the glamorous “upstairs” exhibits are very appealing, I’m always delighted when these manor houses pay equal attention to what went on behind the scenes to make it all happen.  At Petworth, the “below stairs” exhibits are exceptionally well done, including the kitchen with its open fireplace and spit, and the more modern “closed stove”. 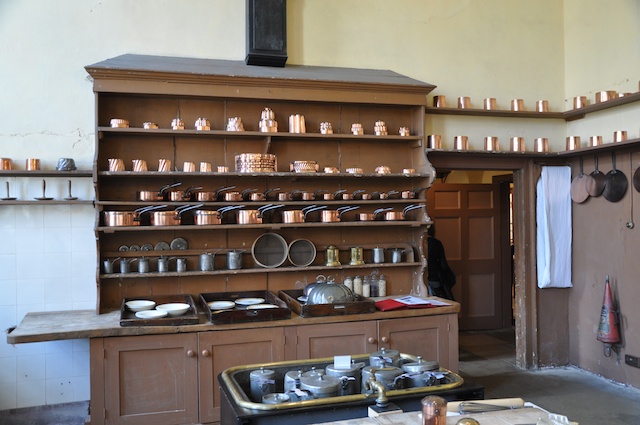 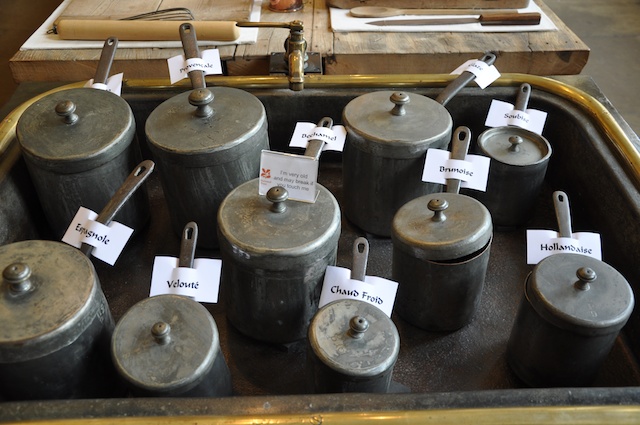 The house boasts an enormous collection of copper pots, saute pans, and tanks for heating water, and an entire set of lidded pans for various sauces. 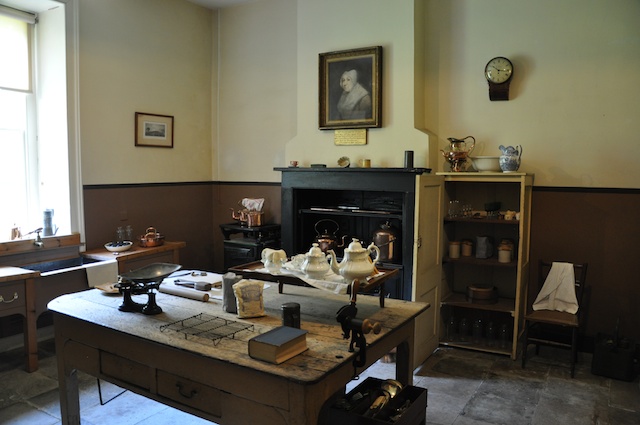 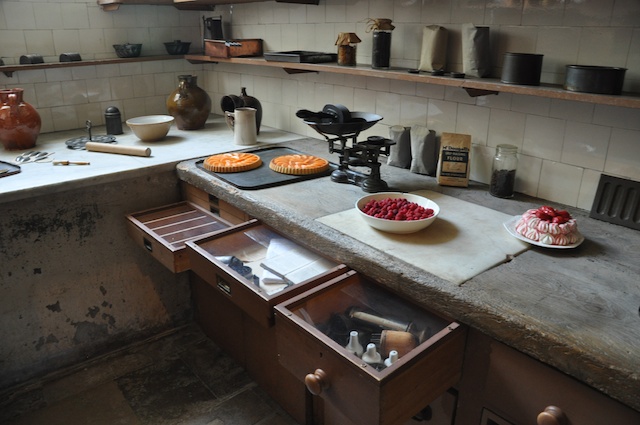 The still room and the pastry & jelly preparation rooms.

For the past 250 years the house and the estate have been in the hands of the Wyndham family.  In 1947 the 3rd Lord Leconfield gave Petworth to the National Trust in the face of heavy death duties, a path taken by the owners of so many of England’s great country houses. His nephew John Wynham, created 1st Lord Egremont, negotiated the gift of part of Petworth’s art collection to the National Trust. The current Lord and Lady Egremont continue to live in part of the house, and The Leconfield Estates continue to own much of Petworth and the surrounding area.