Full confession:  I’m not very keen on Madrid. Maybe it was the weather (cold, blustery and rainy), maybe it was the recovery from jet lag (it was our first stop), and maybe it was simply not what I expected (lots of modern buildings, graffiti everywhere). Whatever the reason, it doesn’t rank in my top 10 European cities. 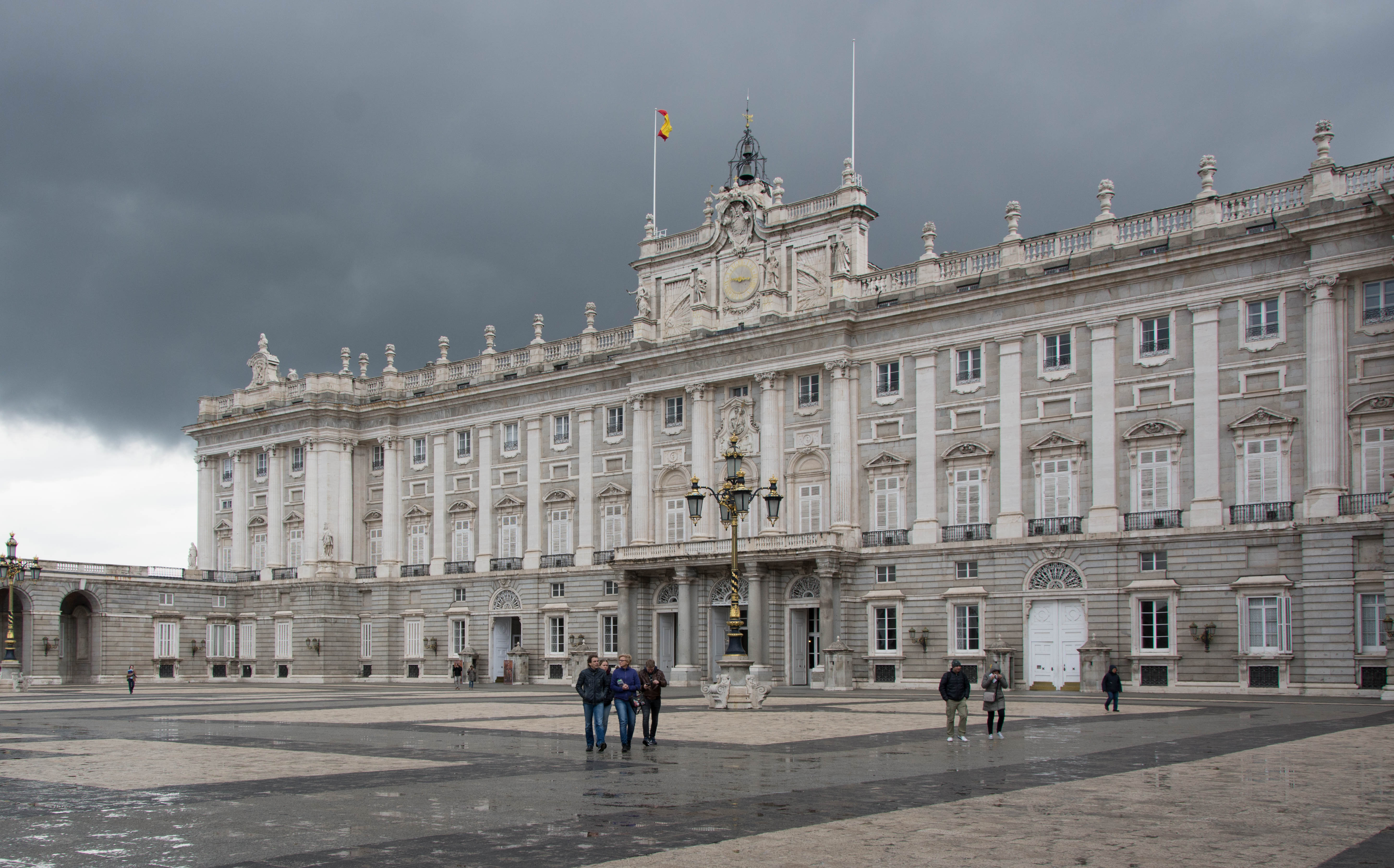 Now that we’ve got that out of the way, the Royal Palace was gorgeous. After setting off from our hotel at a brisk pace, we walked in entirely the wrong direction for about 20 minutes, battling an umbrella that was doing its best to turn inside out. We finally discovered our mistake, but realized we were going to miss the start of our guided tour.  Glenn, ever pragmatic, hailed a cab, and we arrived in the nick of time, soaked and chilled.

It was worth all the trouble to get there! We soon dried off, but did not warm up. Those stone palaces were NOT built for comfort. 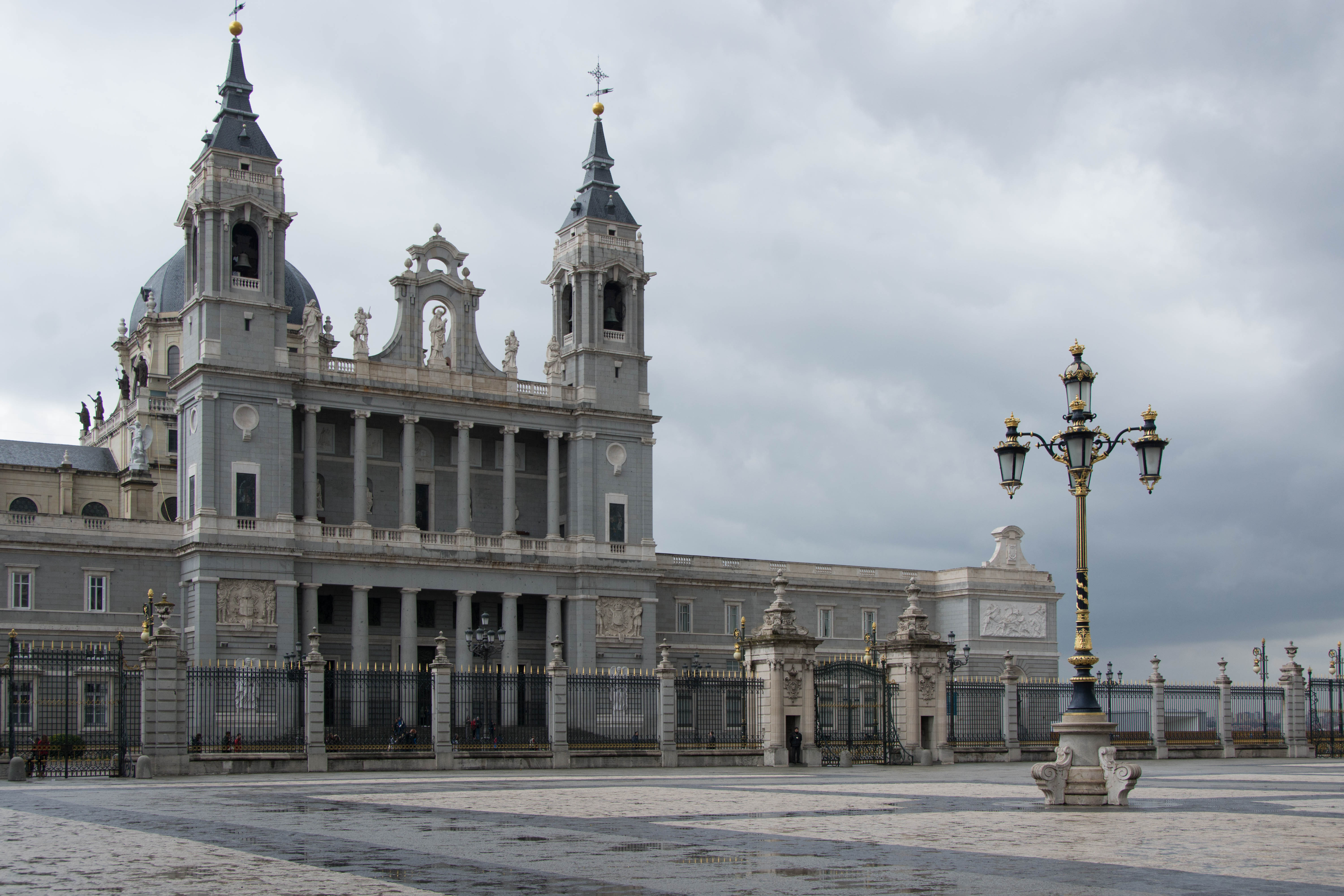 Palacio Real de Madrid, as its known in its native language, is the official residence of the Royal Family in Spain, and officially, it’s used only for state ceremonies. Our guide told us, however, that King Felipe IV is there quite often, working in his office on one of the lower floors. The family lives in another, smaller palace, just outside Madrid.

King Felipe ascended to the throne quite recently, after the abdication of his Father, Juan Carlos in June of 2014. Every family has its issues, and the Spanish Royal family is no exception. Apparently there were some controversial business dealings involving the husband of his daughter, Infanta Cristina, and King Juan Carlos opted to step gracefully to one side. King Felipe and his wife, Queen Letizia are very popular, providing a fresh and modern face to the monarchy, in the manner of the Duke and Duchess of Cambridge in England. 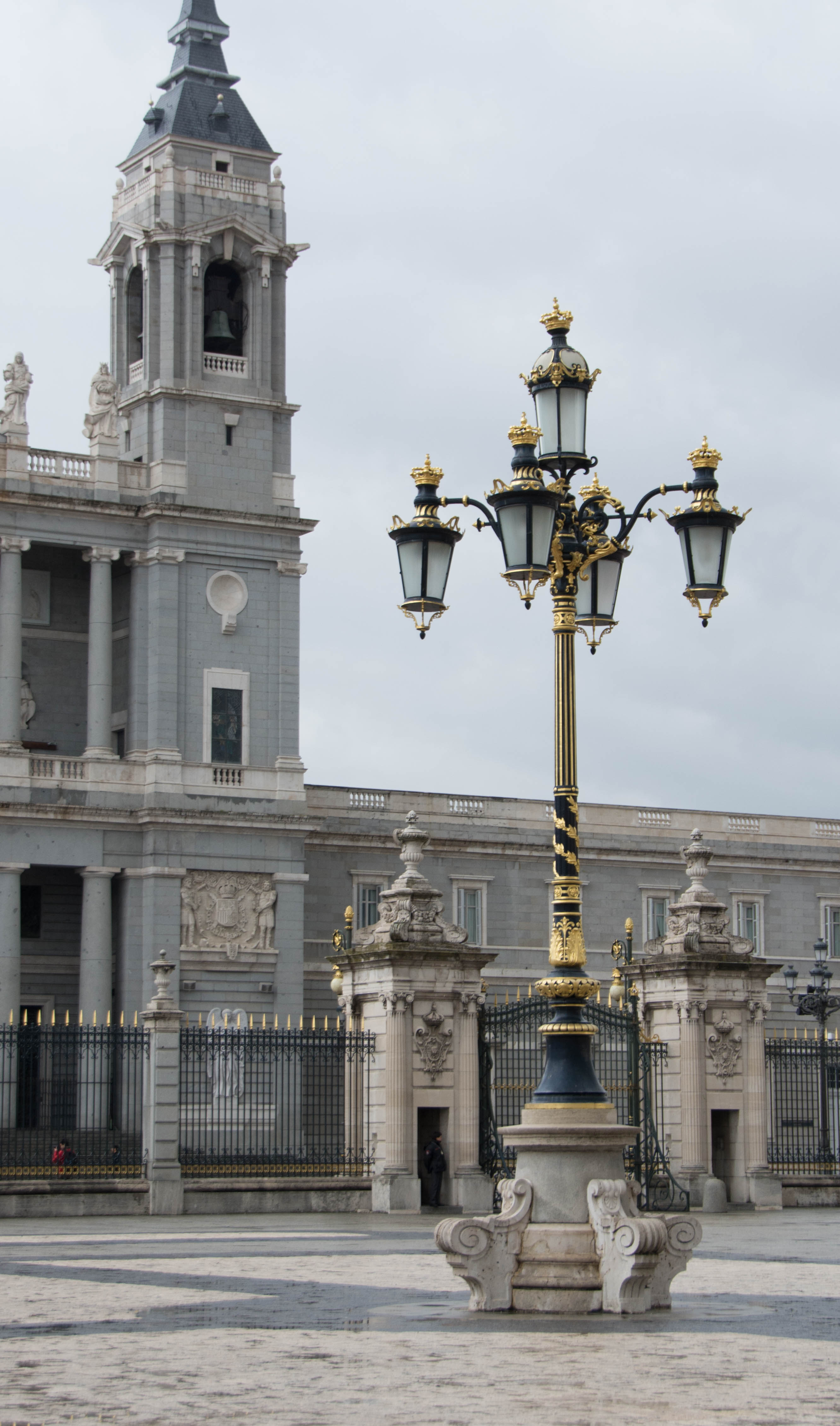 The palace is enormous. All 1,450,000 square feet and 3418 rooms. It’s the largest  European Royal Palace, even bigger than Versailles, and that’s saying something! 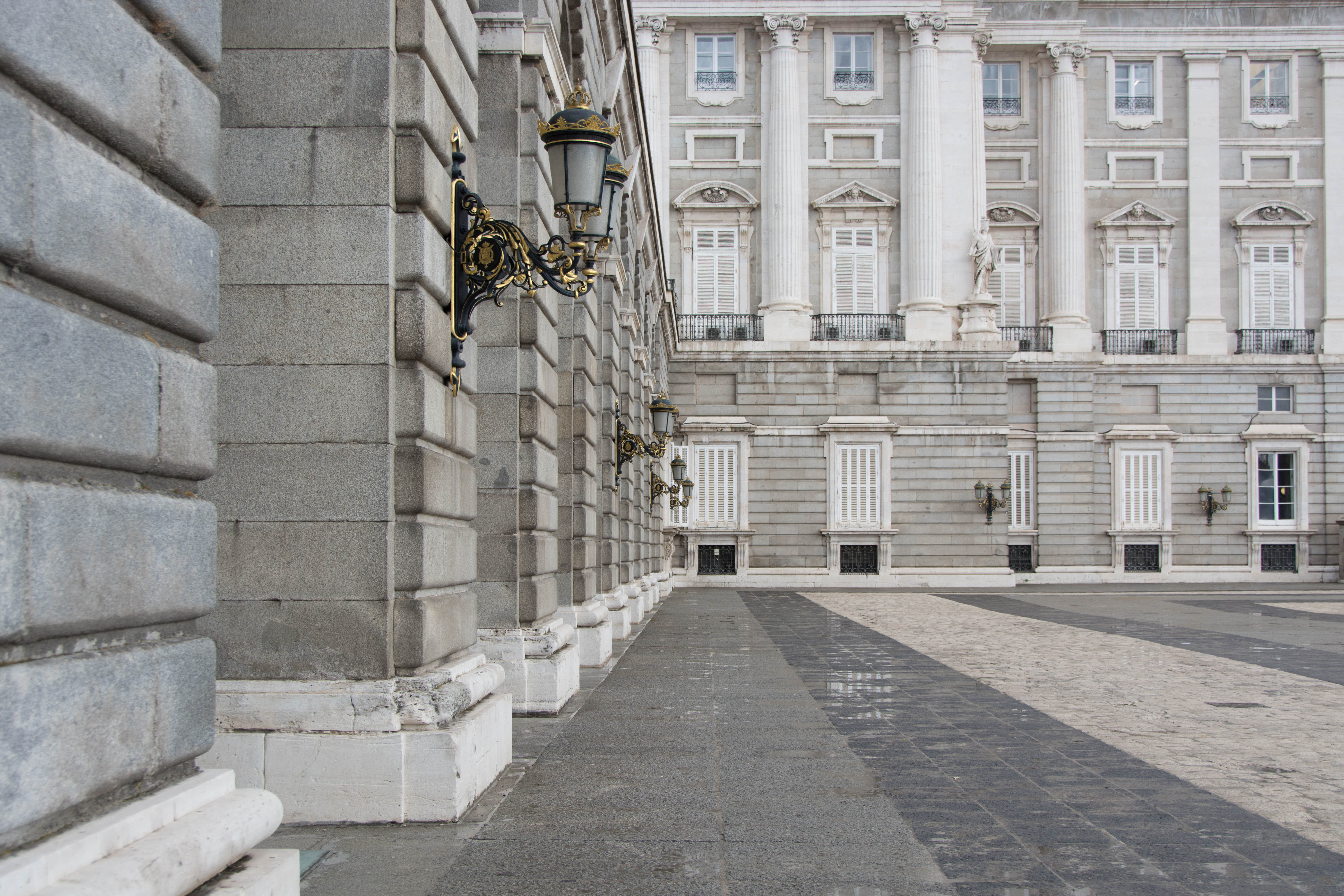 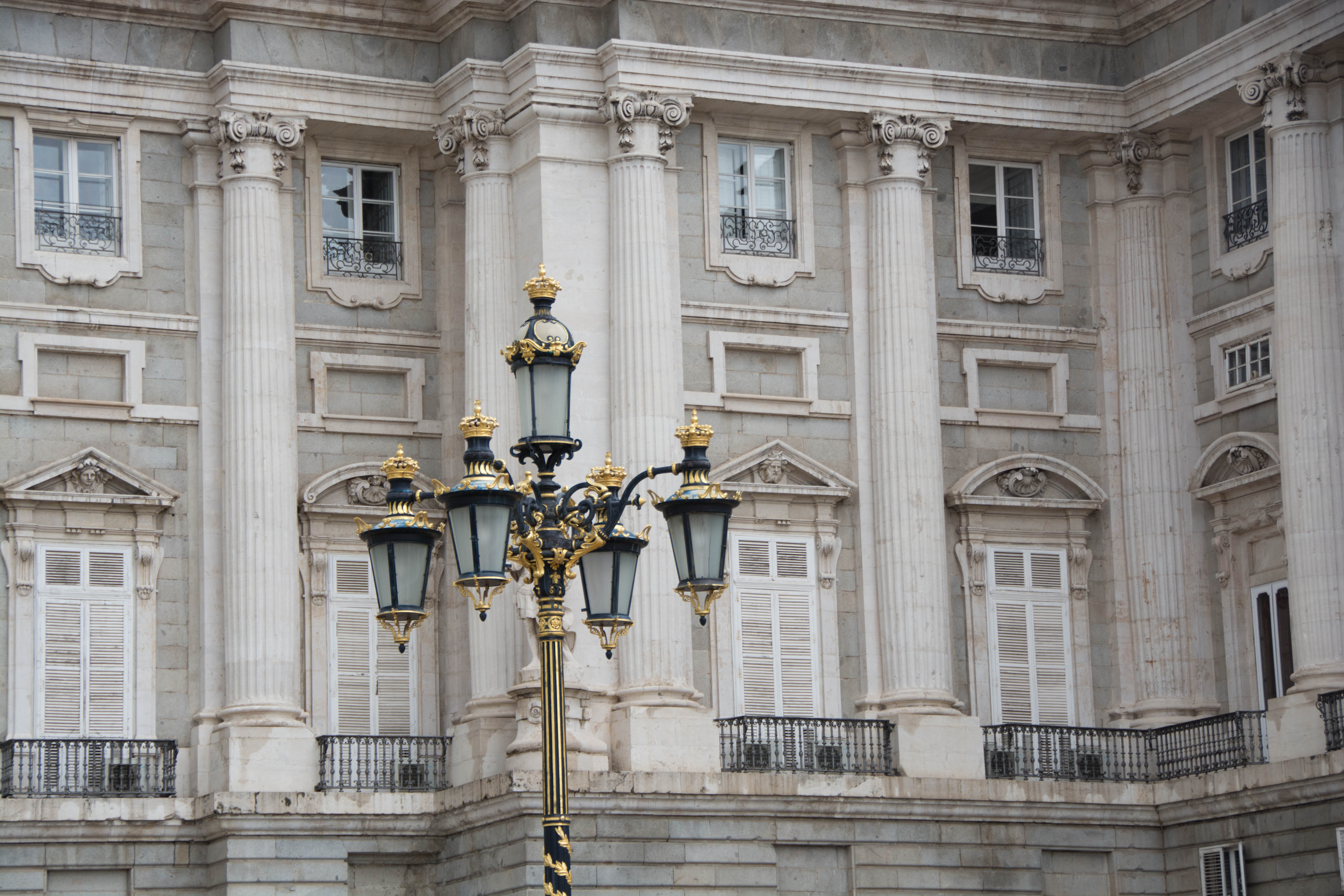 The current palace is only about 300 years old, but it’s built on the site of an 8th century Alcazar (Muslim-era-Fortress), so it’s location was selected with an eye to defence. It overlooks a huge valley, and many of the 3418 rooms are located on floors beneath the level of the courtyard you see in the above pictures. Those rooms housed the staff required to run such a large facility. 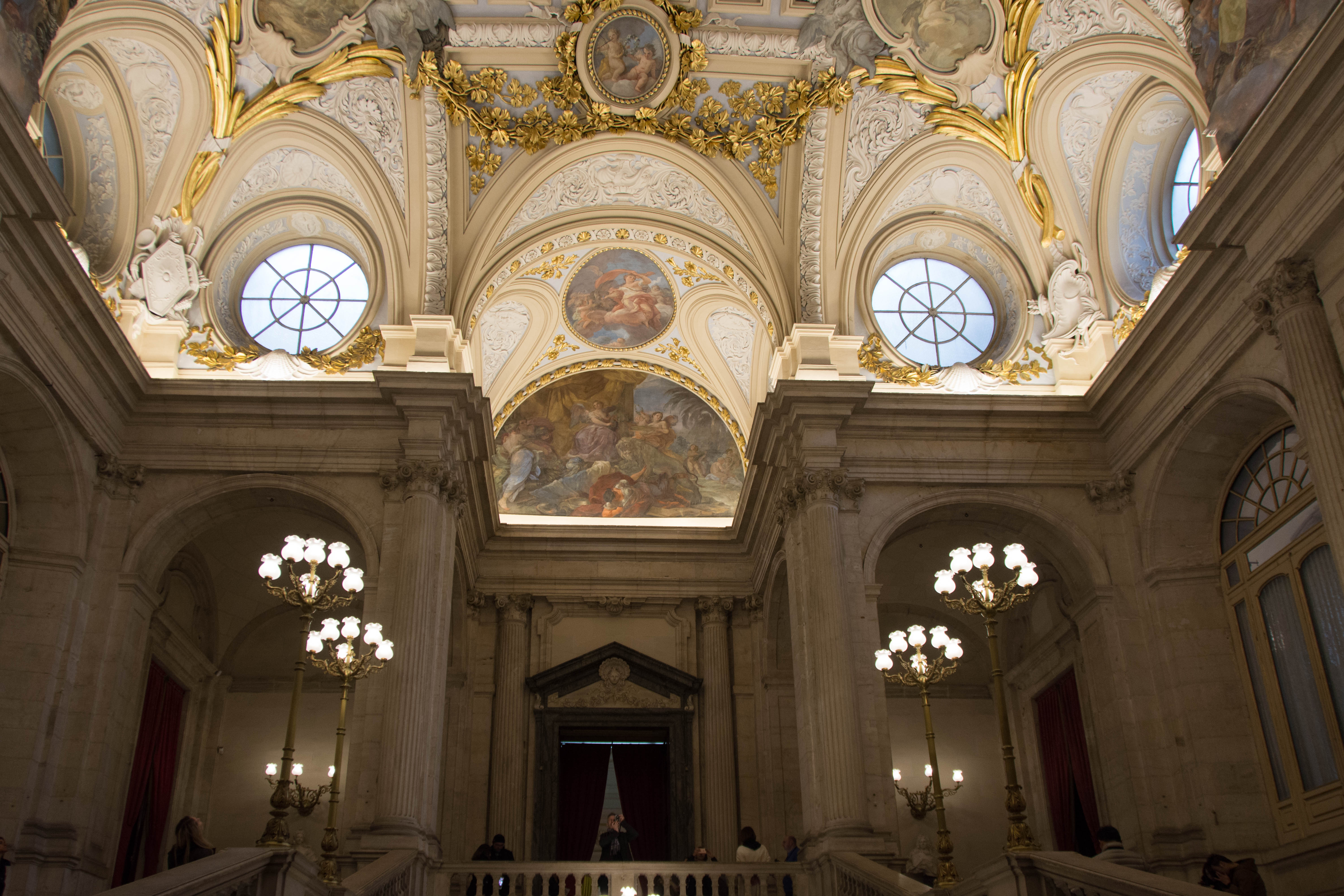 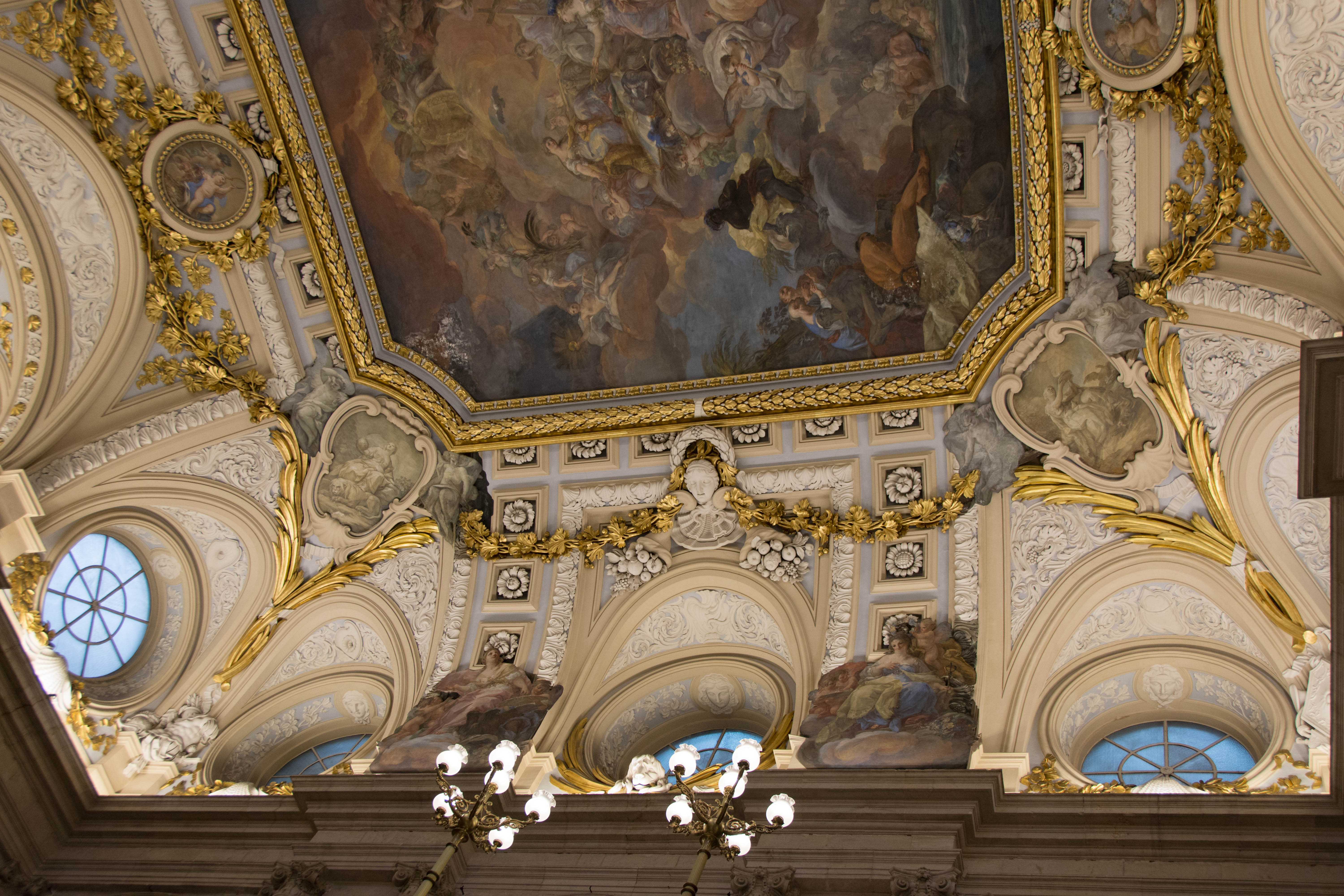 Interior pictures were allowed only as far as the main staircase, but it should give a flavour of what was on offer. 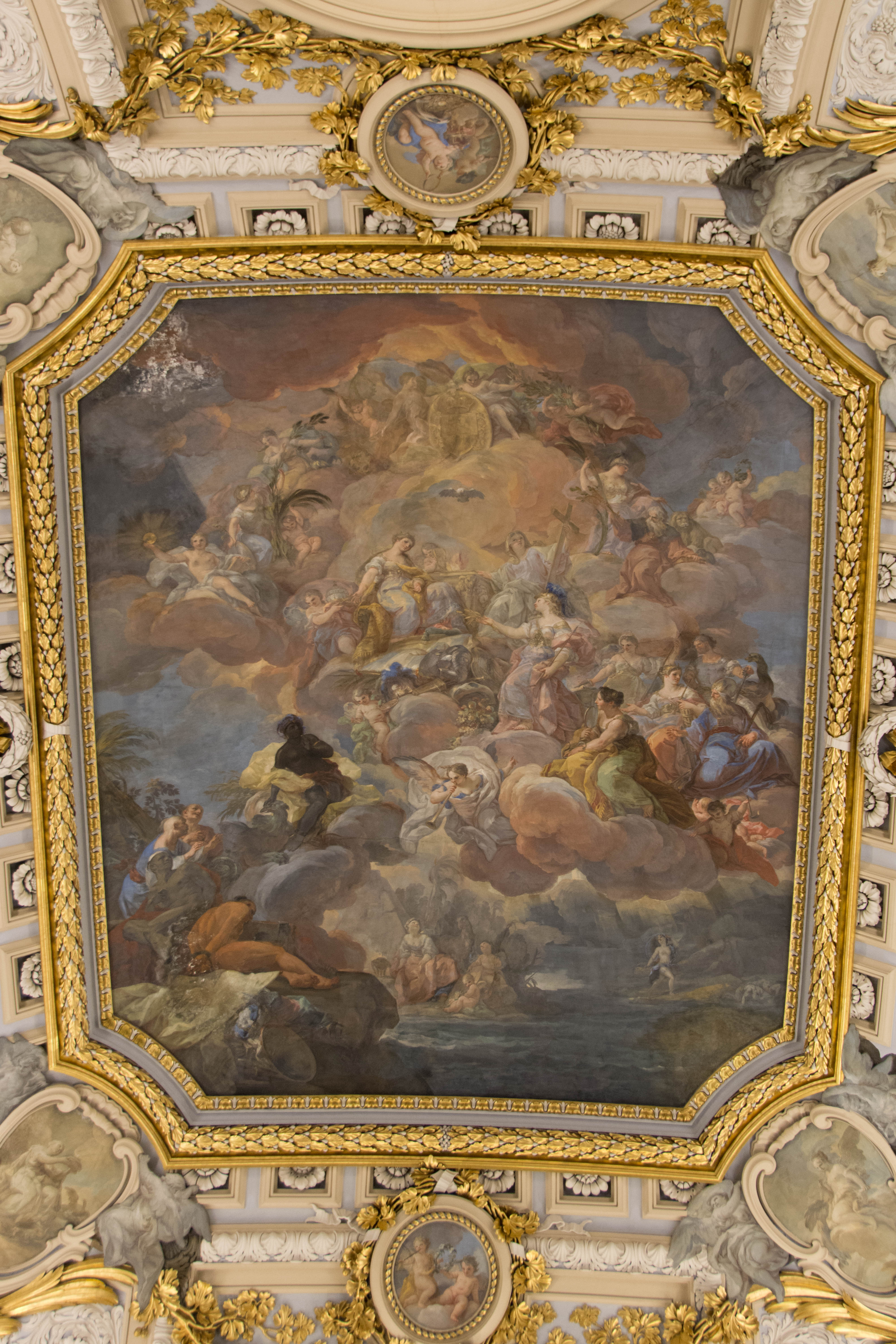 The fresco in the ceiling is stunning. 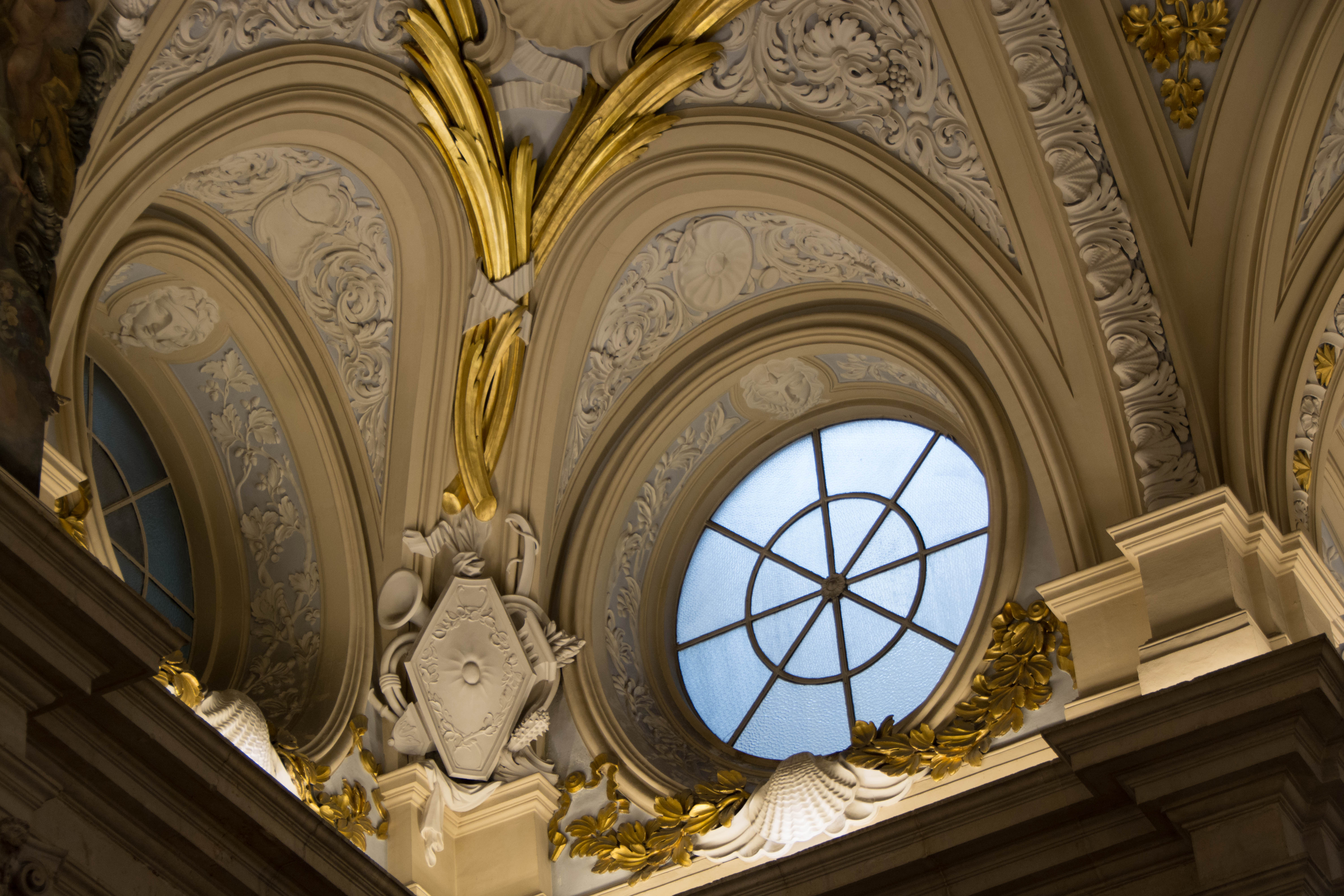 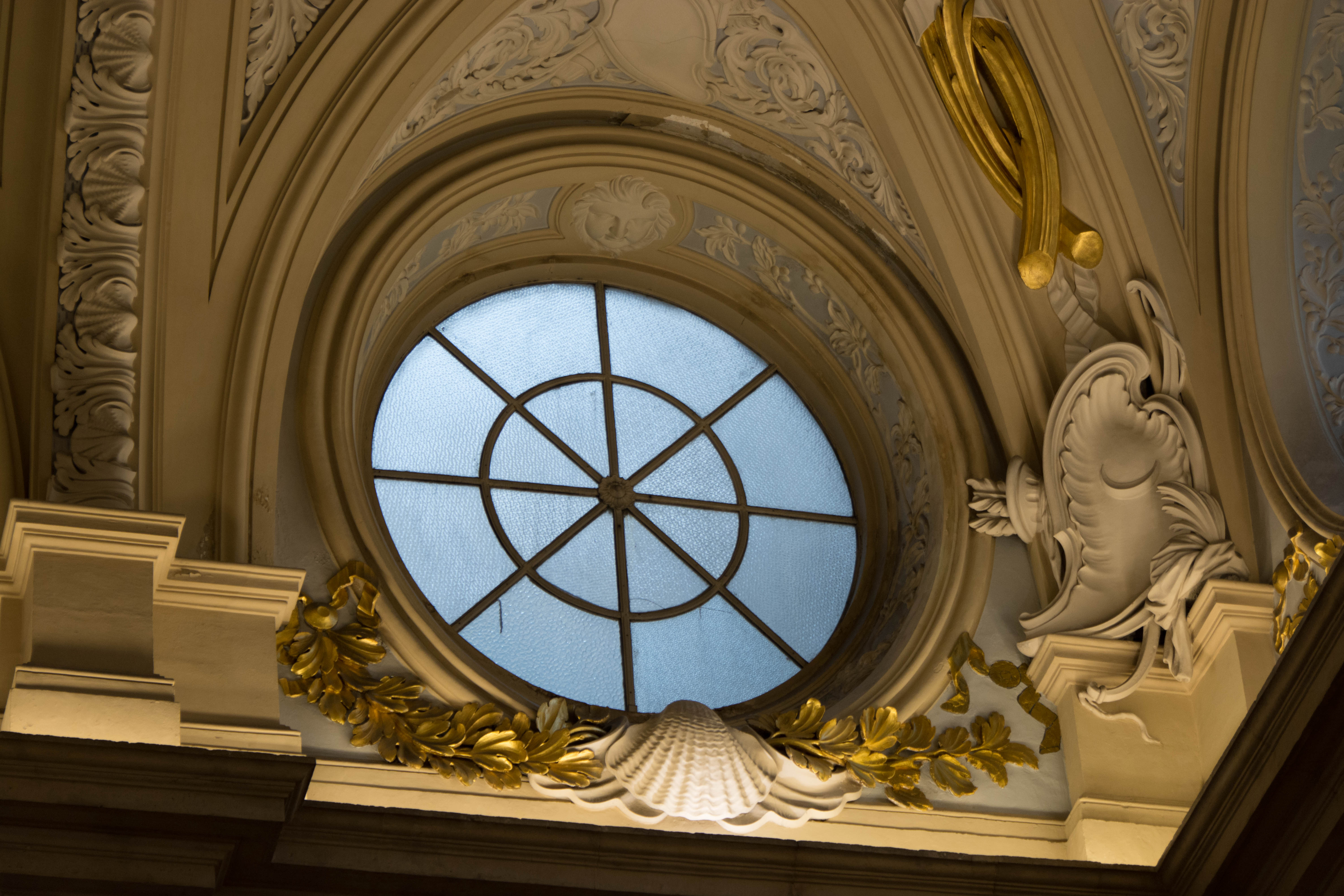 The round window enclosures are surrounded with gilded carving. 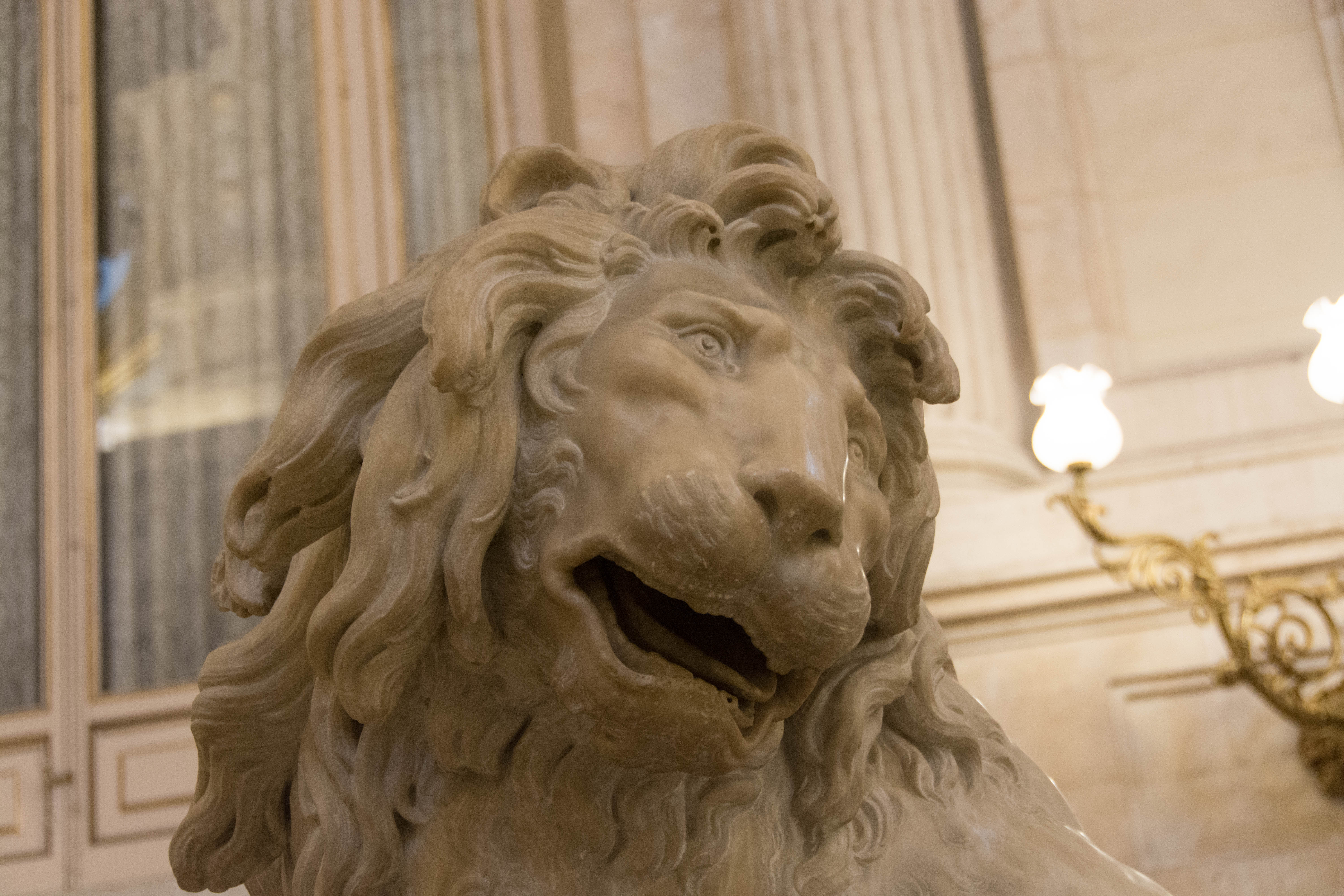 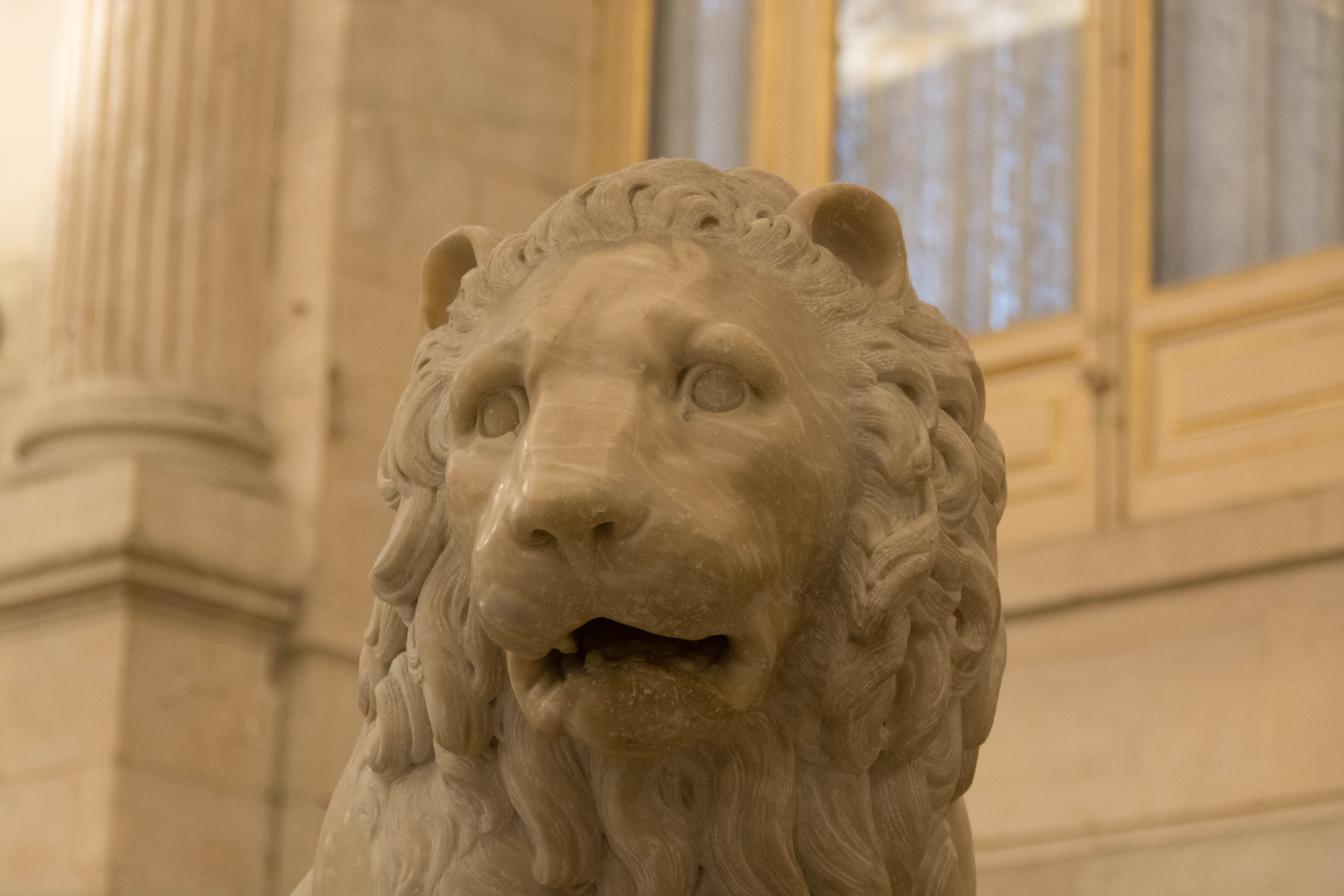 Here is a website with pictures of the interior. I was particularly taken with the moulded ceramic in the shape of fruits and flowers in two rooms. The first picture is a dining room and the second is a bathroom, believe it or not. The ceramic pieces are individually attached to the wall or ceiling with tiny screws. Apparently it took nine years to complete the dining room. It was breathtaking. Suffice to say, minimalism wasn’t the look they were going for. 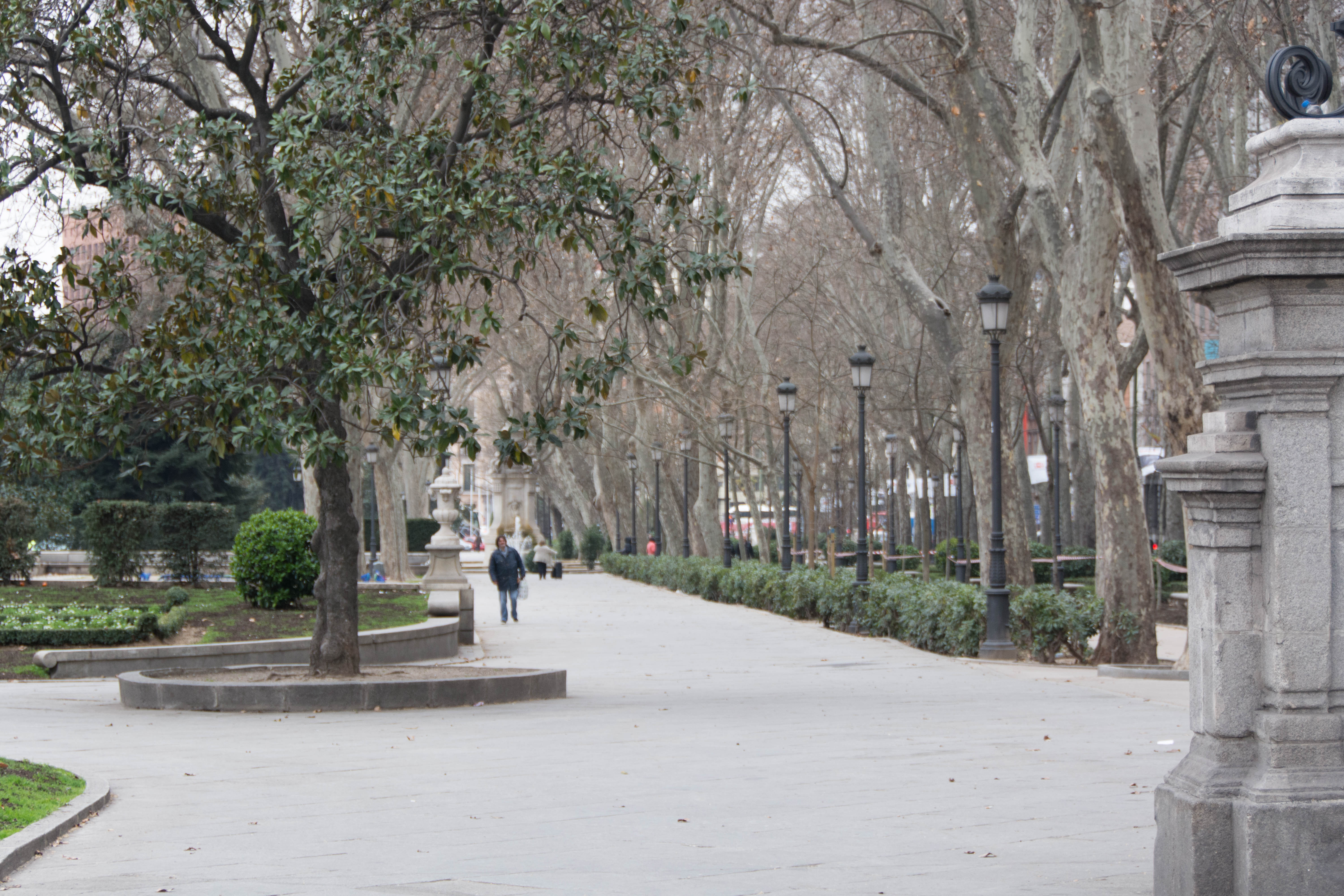 It was still bucketing down with rain when our tour ended, and worked our way over to the Opera tube station to hail a taxi back to the hotel.  The next day it had stopped raining, but was still cold.   Madrid is a good walking city, and has some pockets of very attractive parks and walkways. The pedestrian walkway outside the Prada museum runs down the centre of a large boulevard, with traffic on either side. 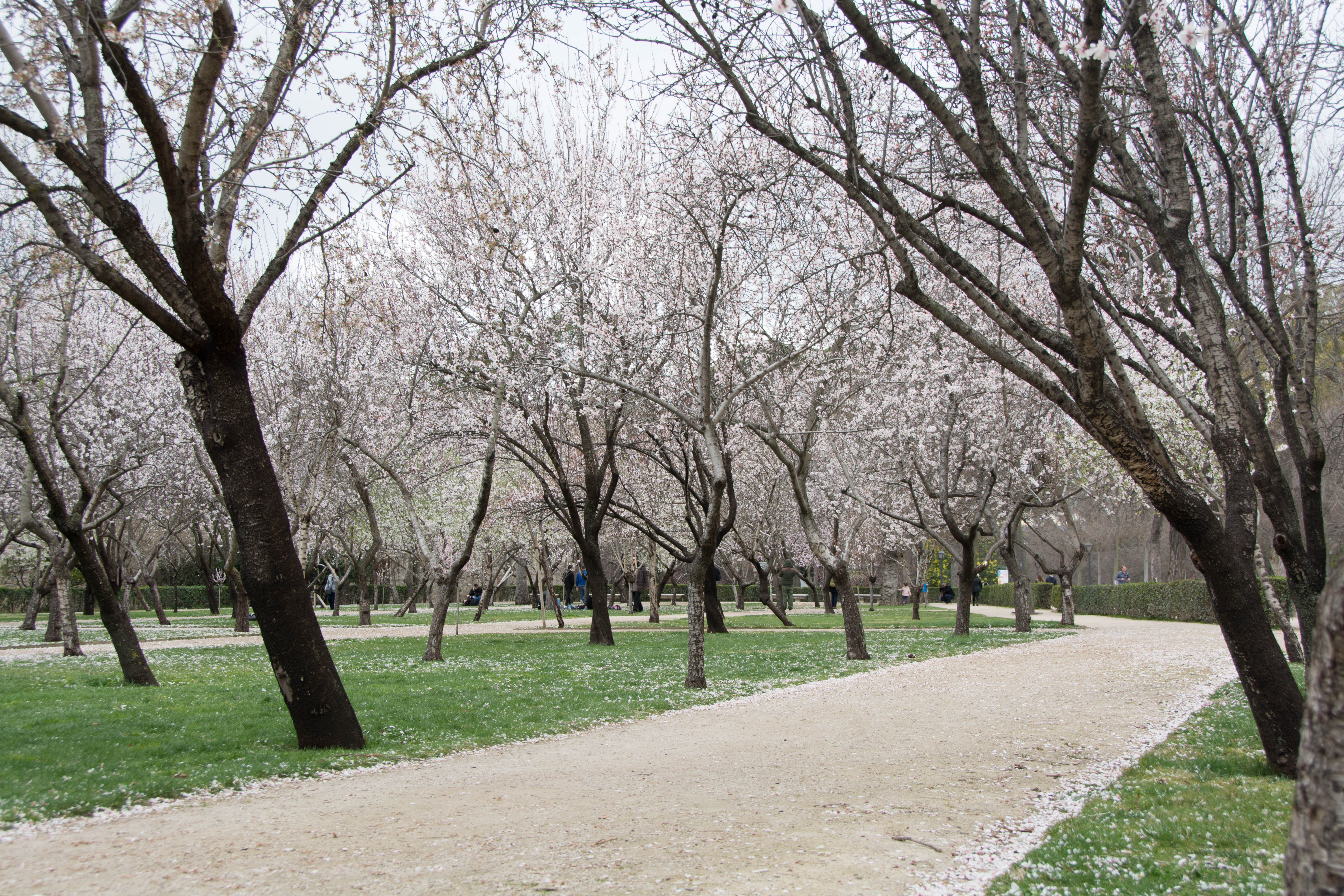 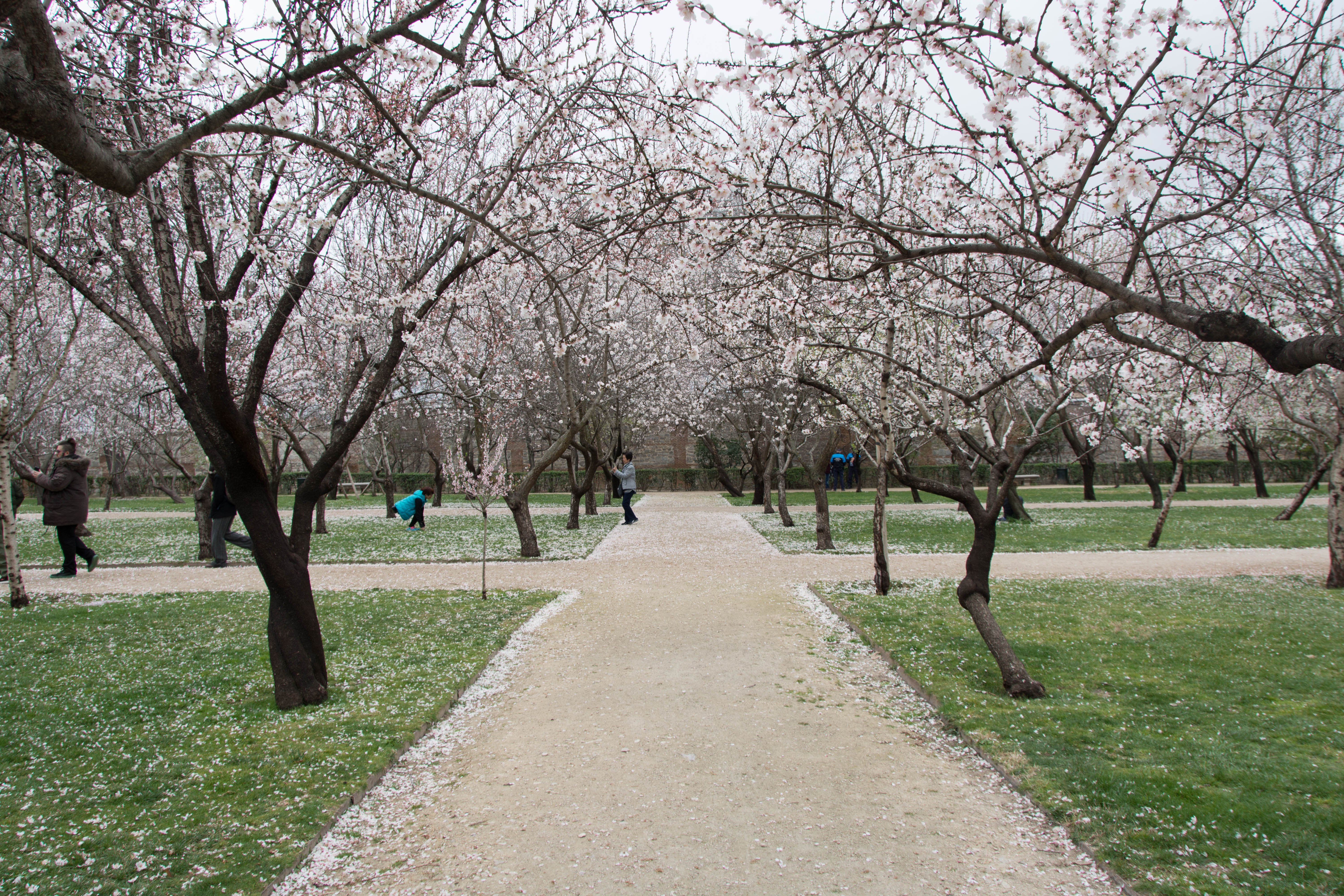 The blossoms were starting to appear in Retiro Park. 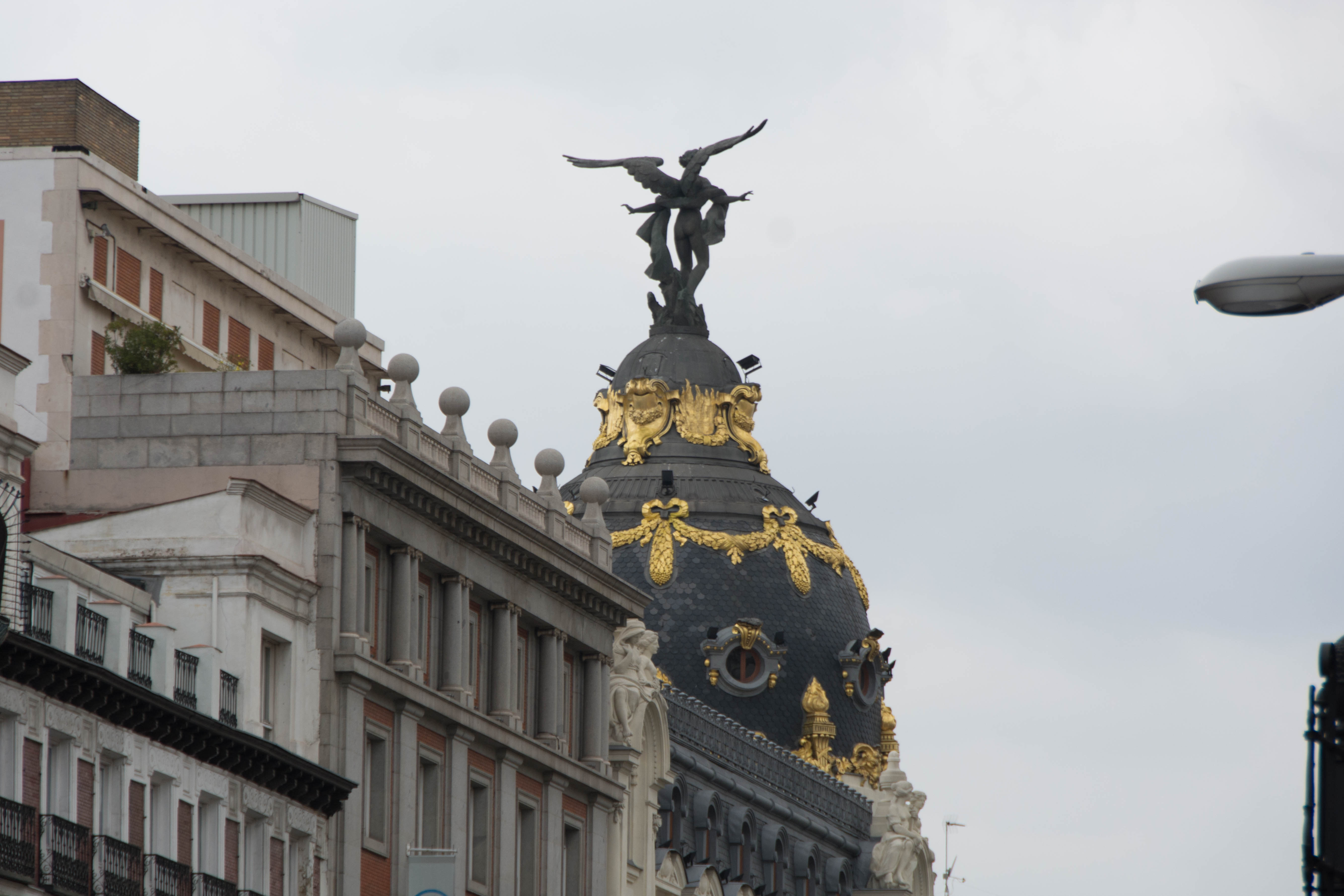 I was intrigued by the gilded dome on this building we saw on our way to the Royal Palace. 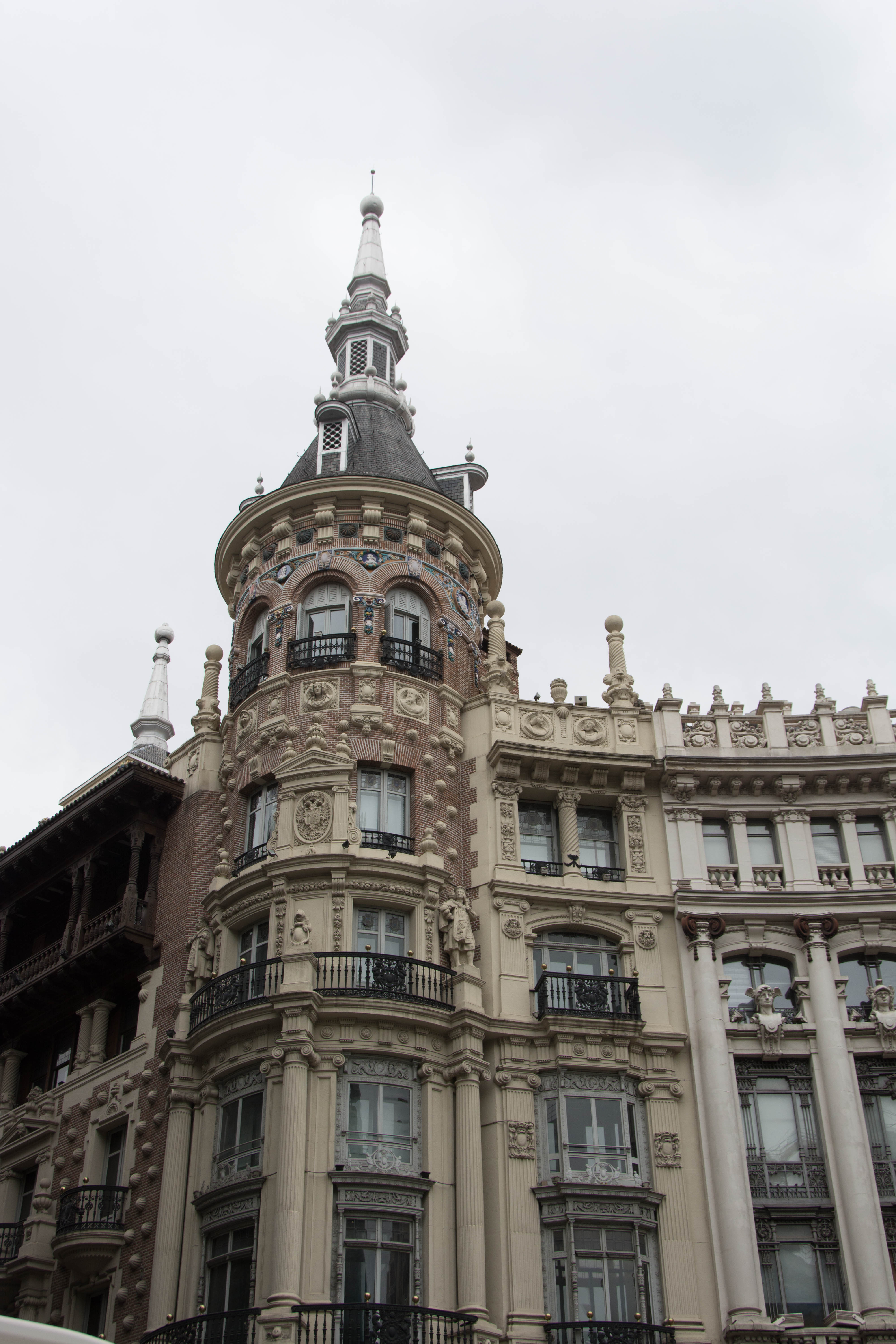 This is the building next door to the Westin Palace Hotel, where we stayed. It looked wonderful all lit up at night,  but I didn’t have my camera or tripod with me when we went out to dinner, so you’ll have to imagine it. 🙂

From Madrid we drove down to Toledo on our way to Granada. Next up: the Cathedral at Toledo, which is incredible.

I’m sharing this post with Between Naps On The Porch.