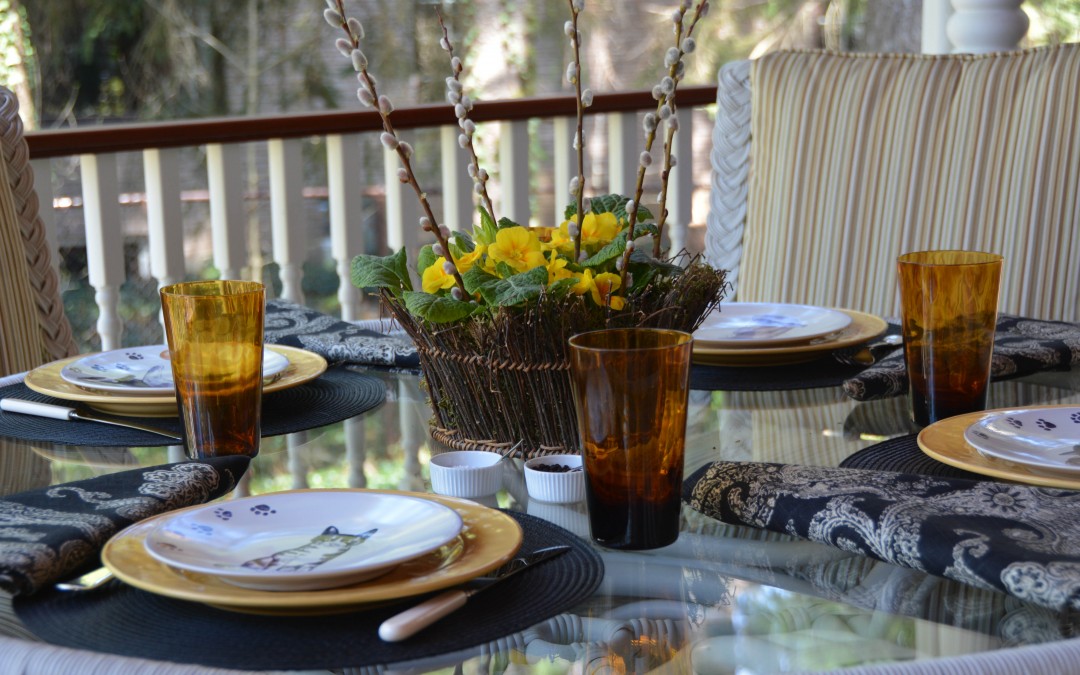 Once in a while, I come across a set of plates that just makes me laugh, and Casa Moda’s Paw Prints fit the bill. An e-Bay find, they popped up one day when I was looking for something else. I was only able to snag one set of four, but after I set this table I went online again and found another set, so now we have eight.  A good thing, as I have five granddaughters and four plates would never have done. As it is, we’ll have inevitable arguments about favourites! 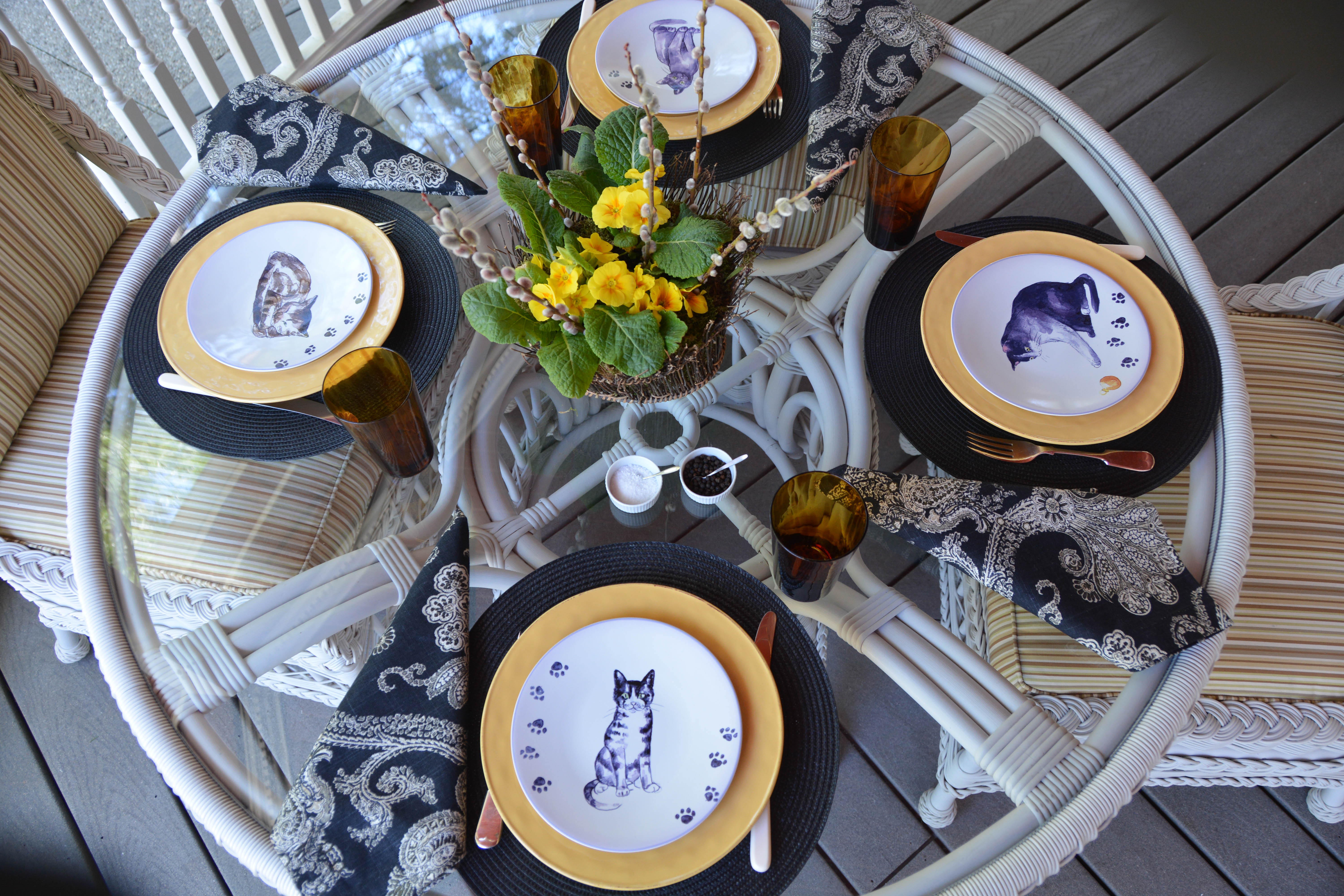 It had warmed up enough this week to risk setting the table outside, I’m so happy to be able to use the porch again. 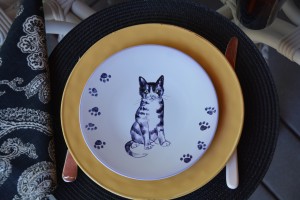 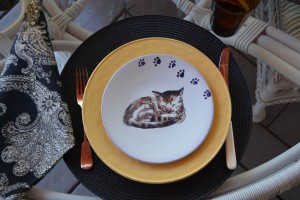 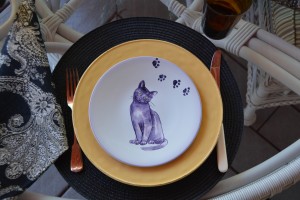 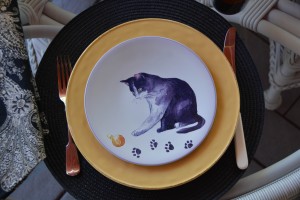 In styling the table, I looked for a hint of colour among the mainly black and white palate. One of the plates features a cat batting a small yellow ball, so I went with yellow dinner plates, yellow primroses and, of course, pussy willows! 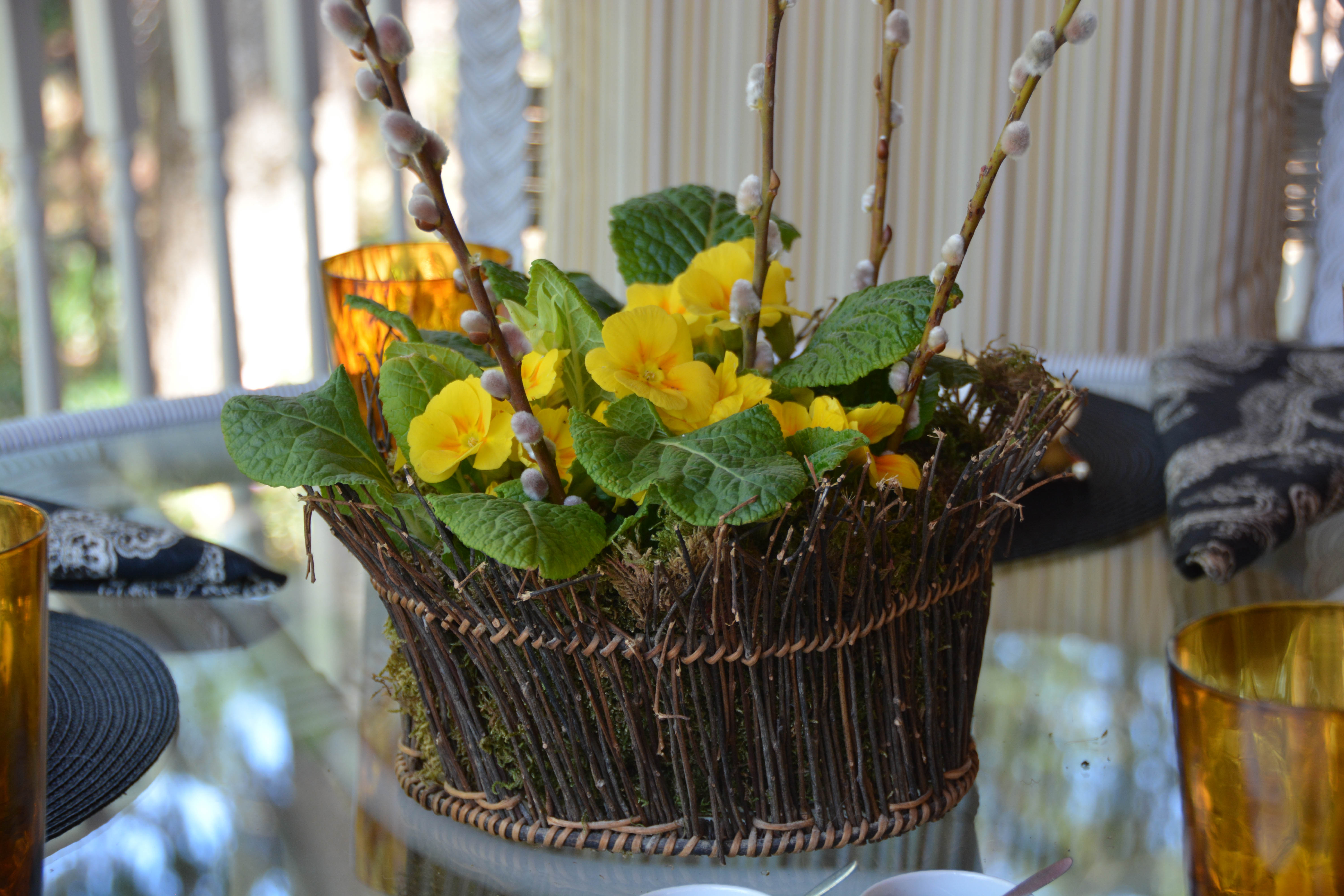 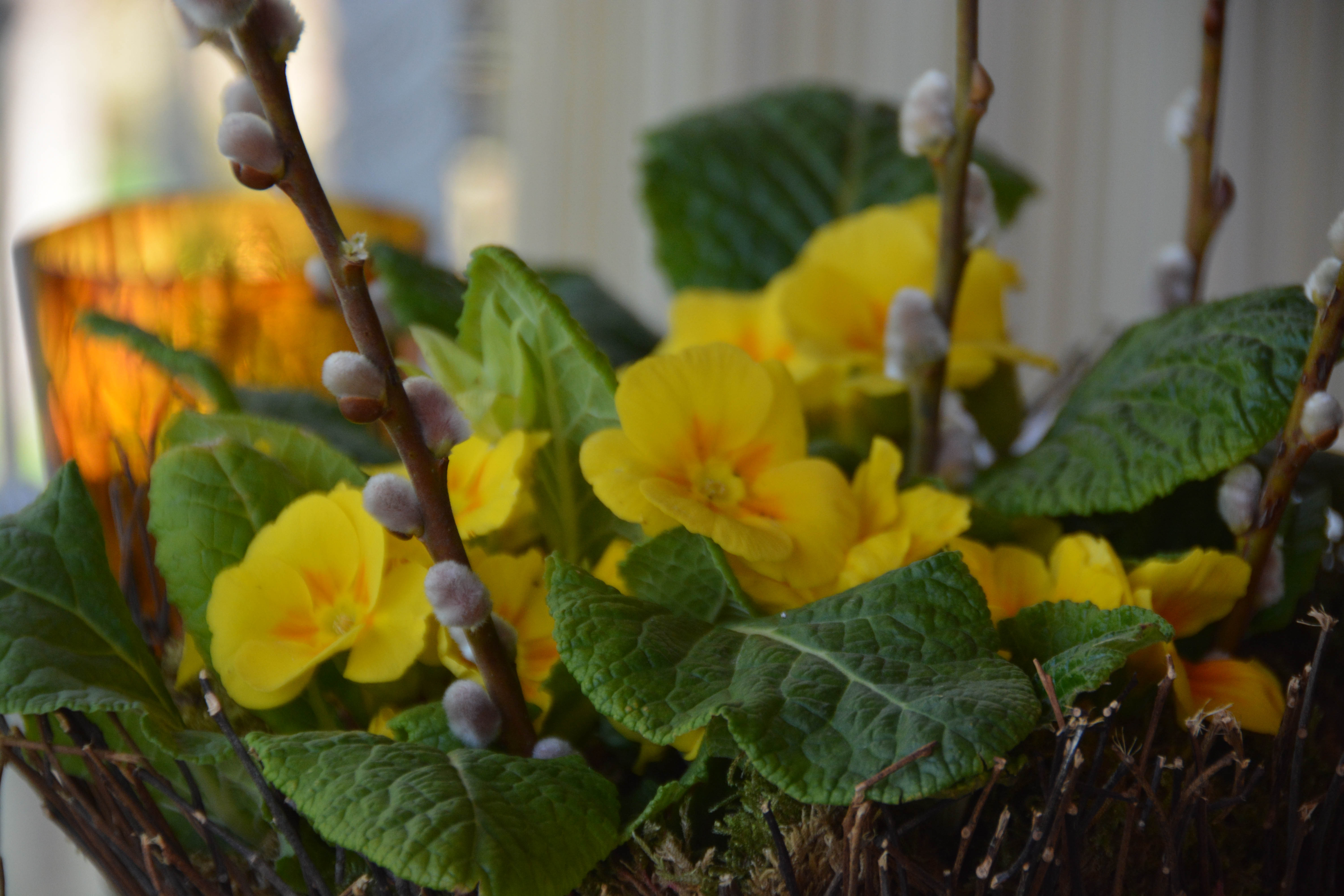 I’ve been busy in the garden this week trimming and fertilizing hydrangeas, planting herbs and adding to the perennials, which can take a beating over the winter. The local nursery had a lovely selection of primroses, and these little beauties will join their brethren in the garden after doing their stint at the table. 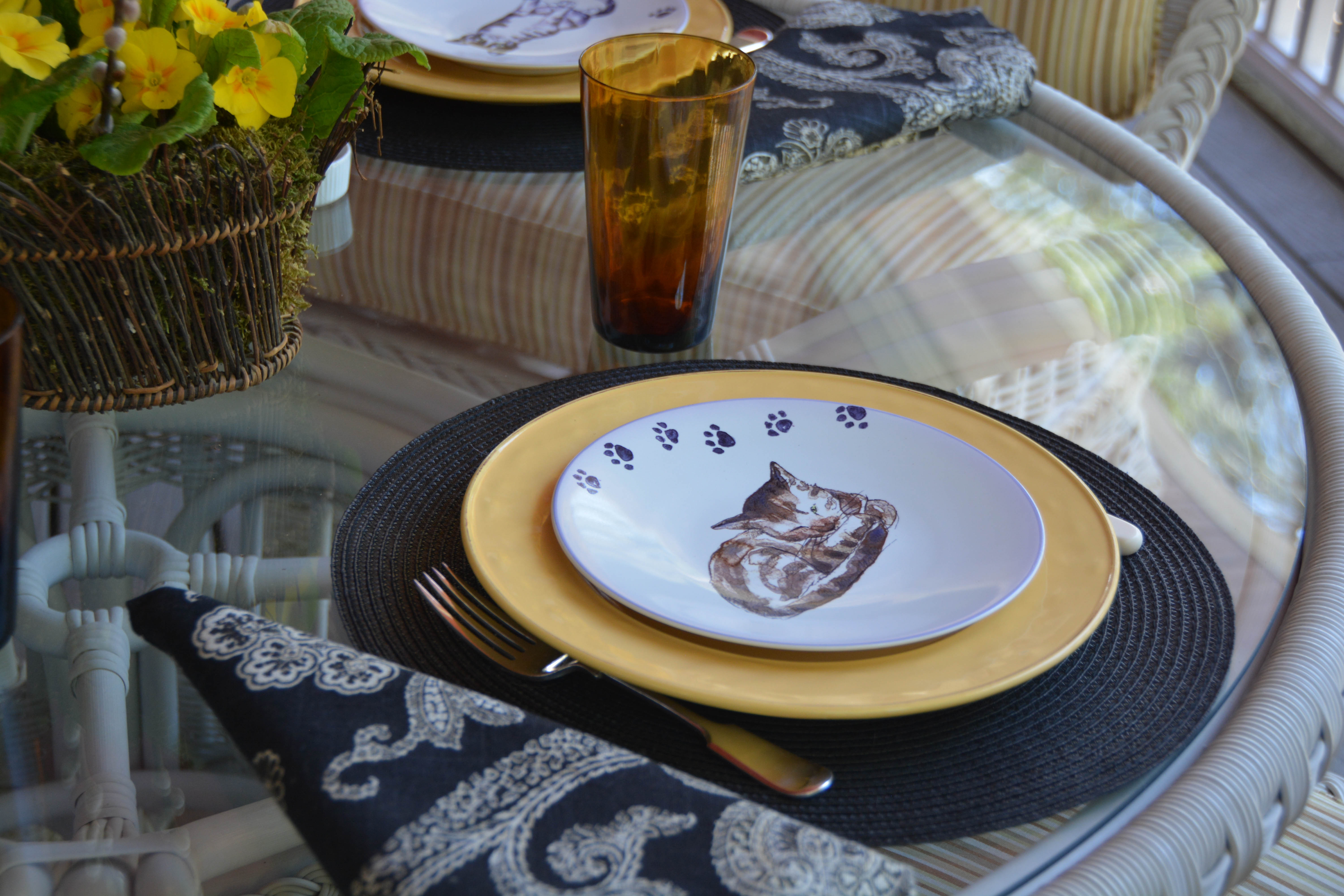 If I’m allowed a favourite among the plates, it’s this little calico, who reminds me so much of our “permanent kitten”, Ronnie. She was a feral kitten who came to live with us when daughter Lauren was taking riding lessons (she’s the last one, Mummy, and she will be all alooooone if we don’t give her a home), which is how we ended up with six cats at one point…  Ronnie, short for Veronica, is now around twelve, and still weighs only four pounds or so. 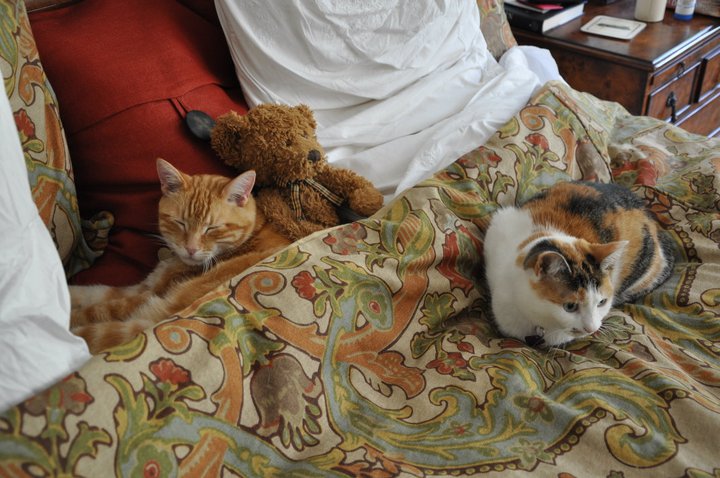 Here she is, reluctantly sharing the bed with Tigger and Teddy, who you may have met in previous posts 🙂 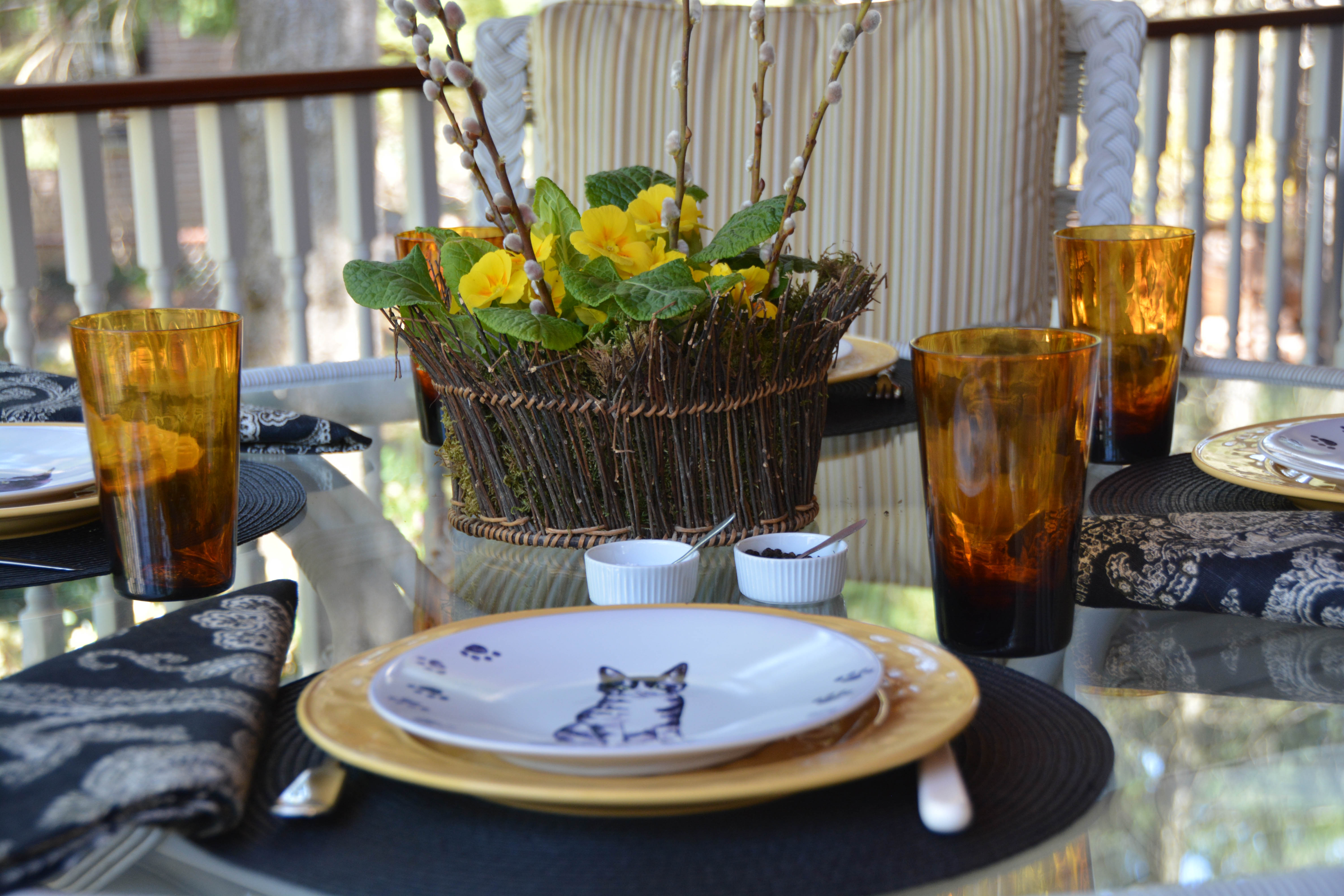 The tortoiseshell glasses, the yellow plates and black placemats are all from Pier 1 a couple of years ago. The napkins were custom made from Chintz & Co. in Victoria, B.C. about ten years ago.

Looking forward to more meals on the porch!