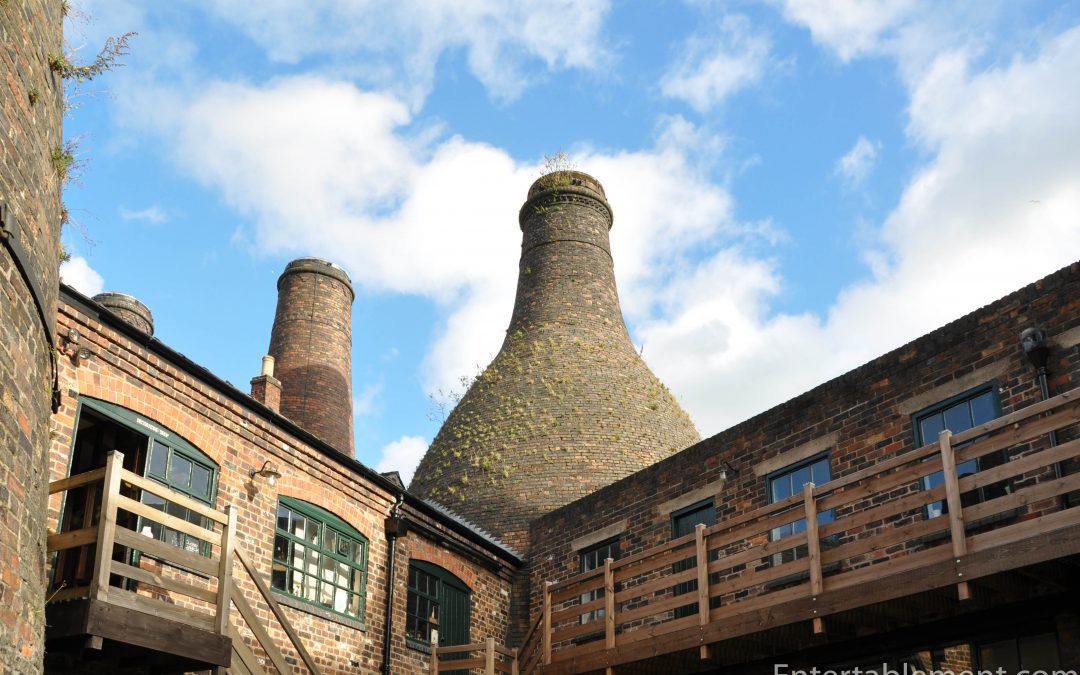 Stoke-on-Trent, in Staffordshire, is home to the original factories for ceramic production in England, and was on my “must see” list for years. By dint of marital negotiation, I got my ceramic museums and Glenn got the Morgan Factory (subject of another post, still to come).

We started at the Wedgwood factory, which was all very clean and modern. We were surprised to find that the actual processes in producing china have not really changed, just automated. A lot of the district’s manufacturing has been sent off to Indonesia and India, to the disgust of the locals. Wedgwood has acquired Royal Doulton, Waterford and a few other well-known lines in the last few years and had just celebrated their 250 year anniversary at the time of our visit. 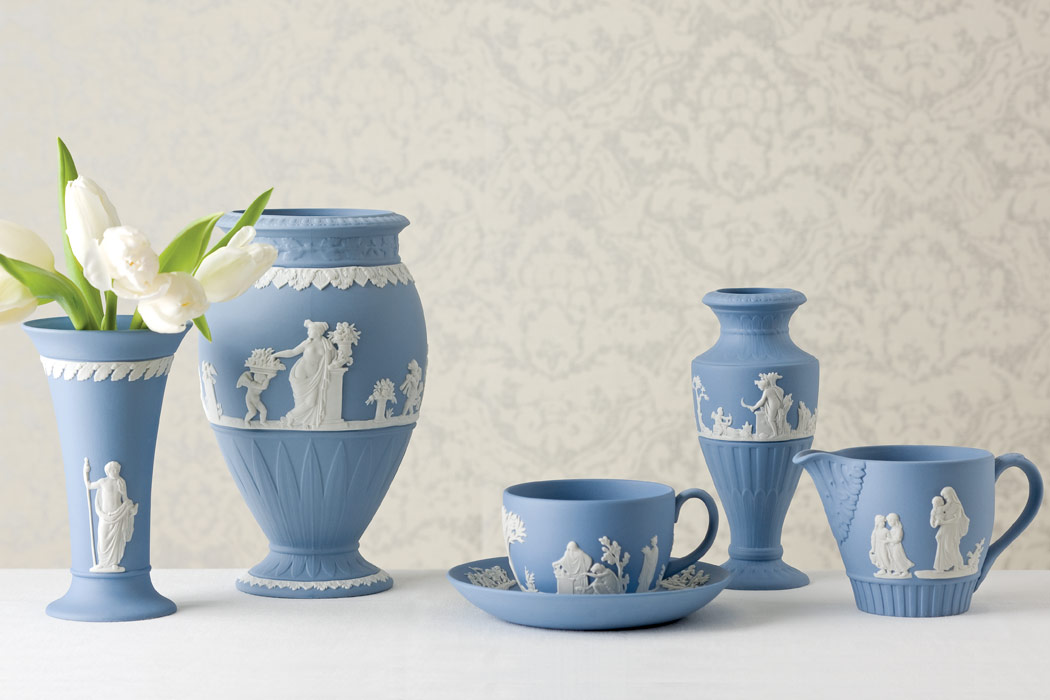 Victoria Magazine did an article on 250 years of Wedgwood History and have sent out a link to it in their most recent newsletter.

The founder, Josiah Wedgwood, was a fascinating man. He came from a family of potters and was the youngest of twelve children. A real visionary, he was always experimenting, testing and designing. He invented and perfected “creamware”, which was later commissioned by the Royal Family, and became known as Queen’s Ware. 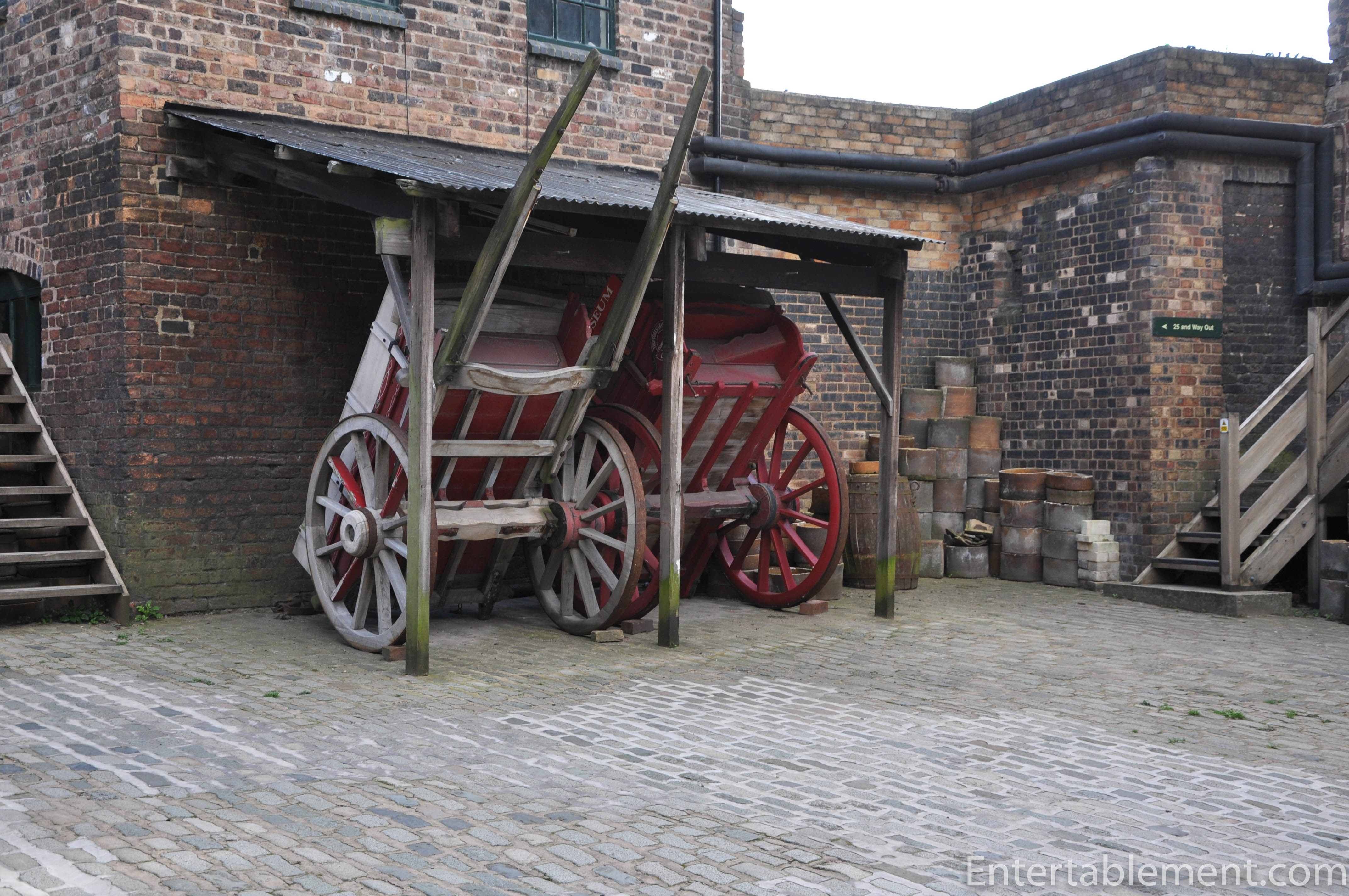 Josiah Wedgwood was responsible for bringing the canal to Staffordshire in the late eighteenth century, which allowed production to really take. Before that, all the raw materials – coal, clay, stone and water – were brought in, and the finished product  taken out, by packhorse on wagons like you can see above (can you imagine?). 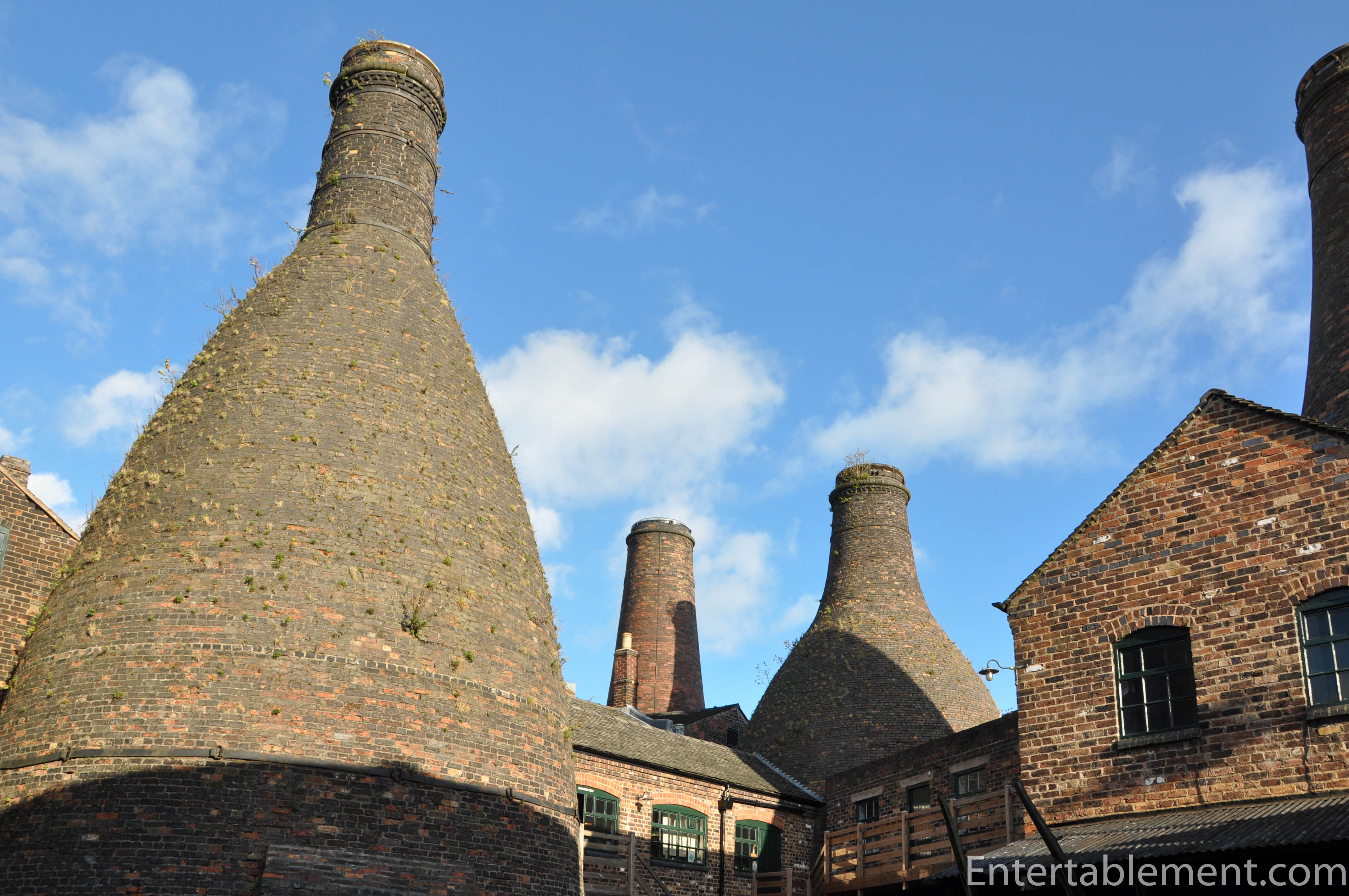 Our next stop was the Gladstone Pottery Museum, an intact, working museum with  five bottle ovens, some of the very few preserved today.  As late as the 1960s, there were 2000 of these bottle ovens spewing heaven knows how much pollution into the atmosphere. The clean air act of 1956 put a stop to it, finally, and the smoke-fillsd skyline of Staffordshire changed forever. 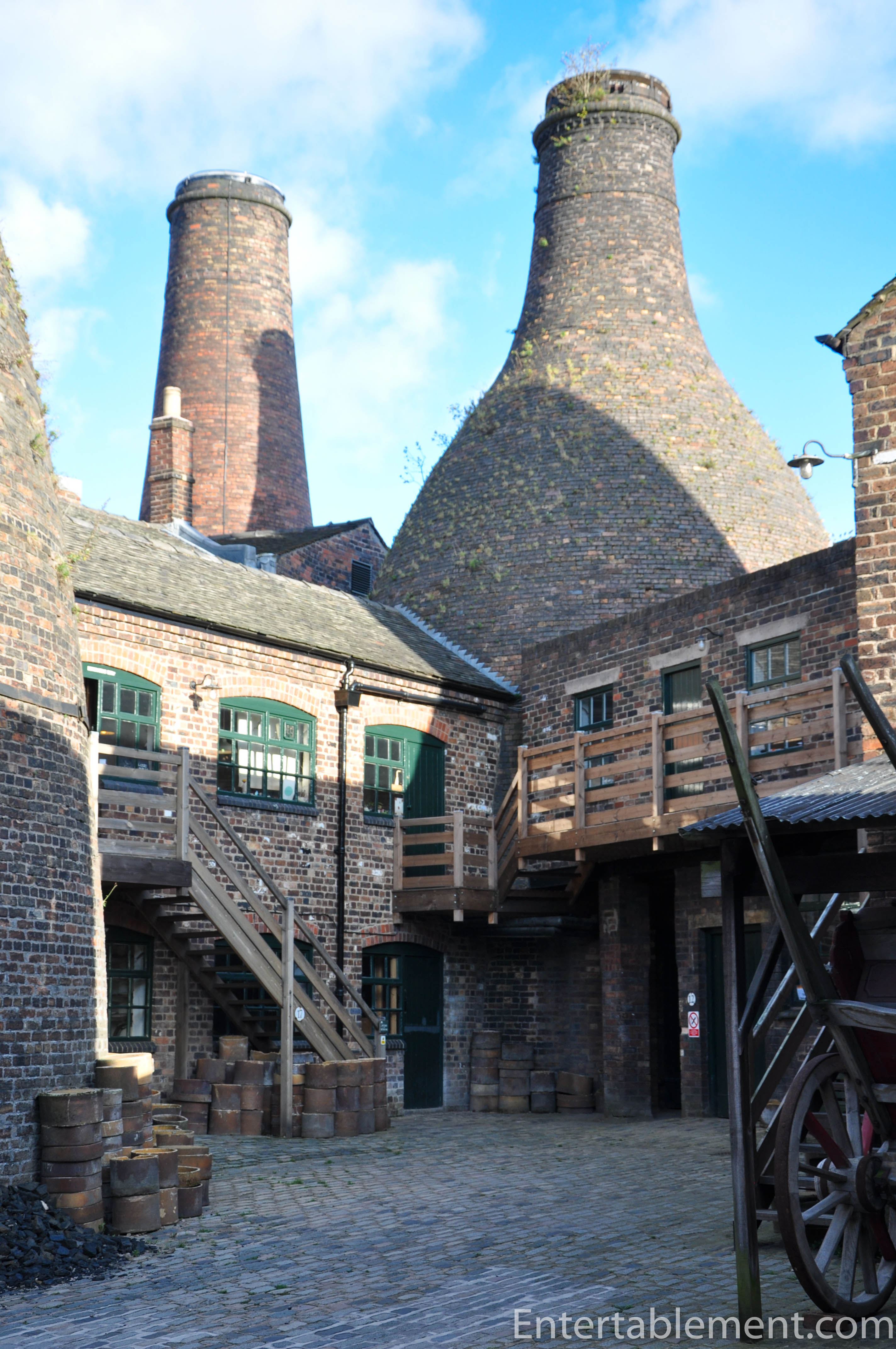 The working conditions of an old pottery were not to be believed. In 1861 there were 4065 children under ten years of age working in the potteries, and 593 of them were five years old, turning wheels, fetching and carrying. Apprenticeships were seven years for many positions, and often when the apprentice got to the end of the seven years they were sacked and had to start over, which keep labour very cheap and job security very low. Women were paid less than men for the same position, although widely acknowledged to do better work. My cynical side says some things haven’t changed, apparently. 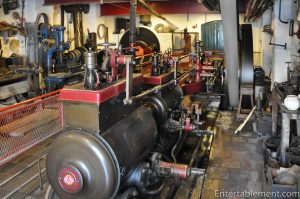 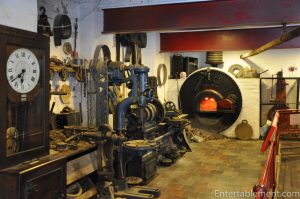 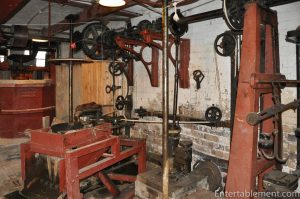 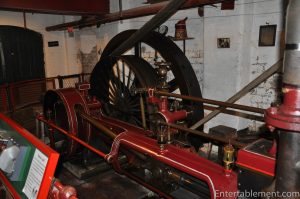 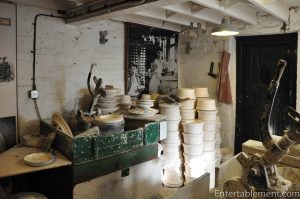 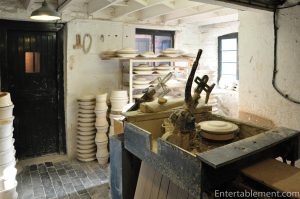 This is some of the machinery that worked the raw materials into the clay that was used to make the end products. 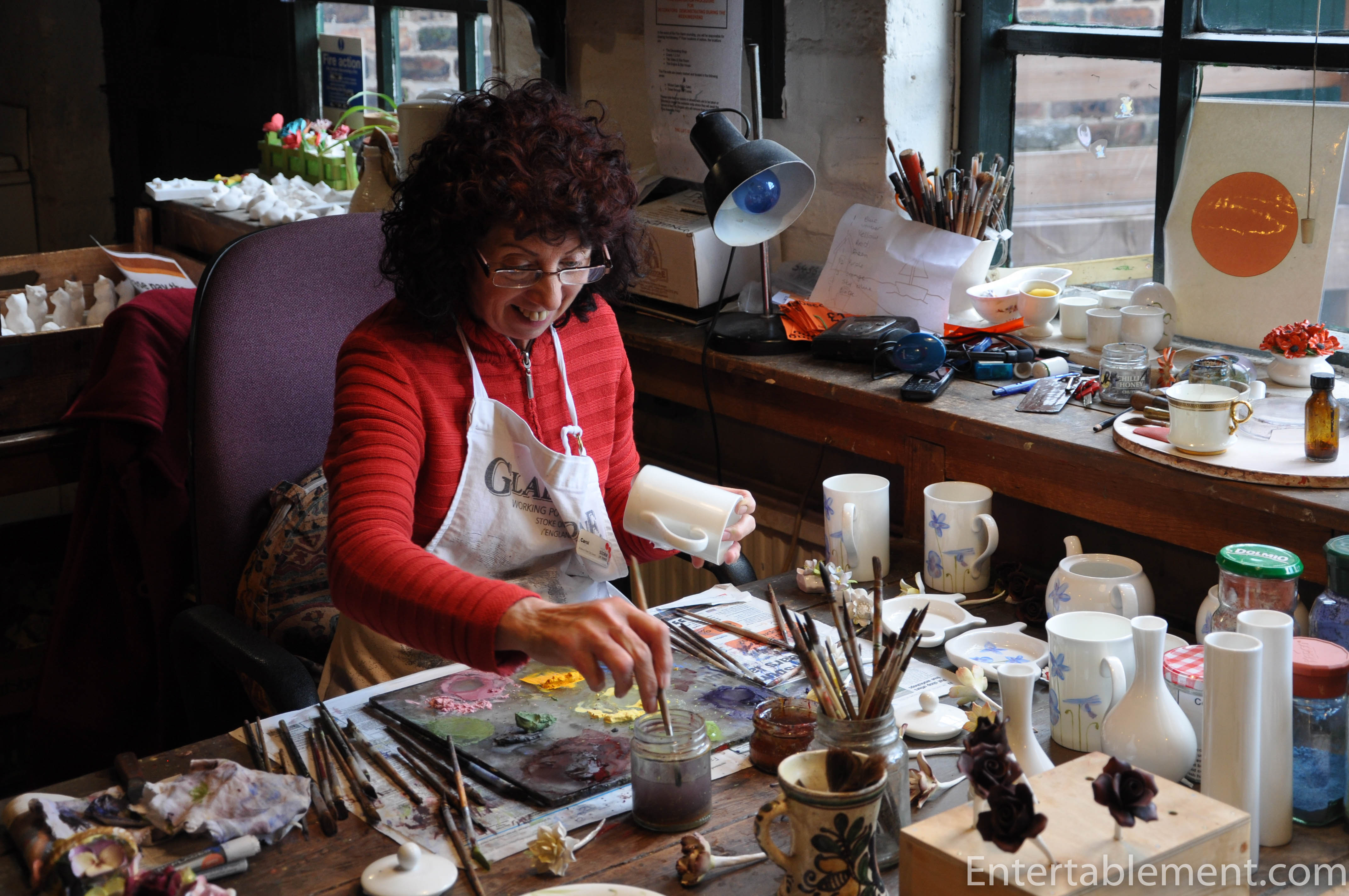 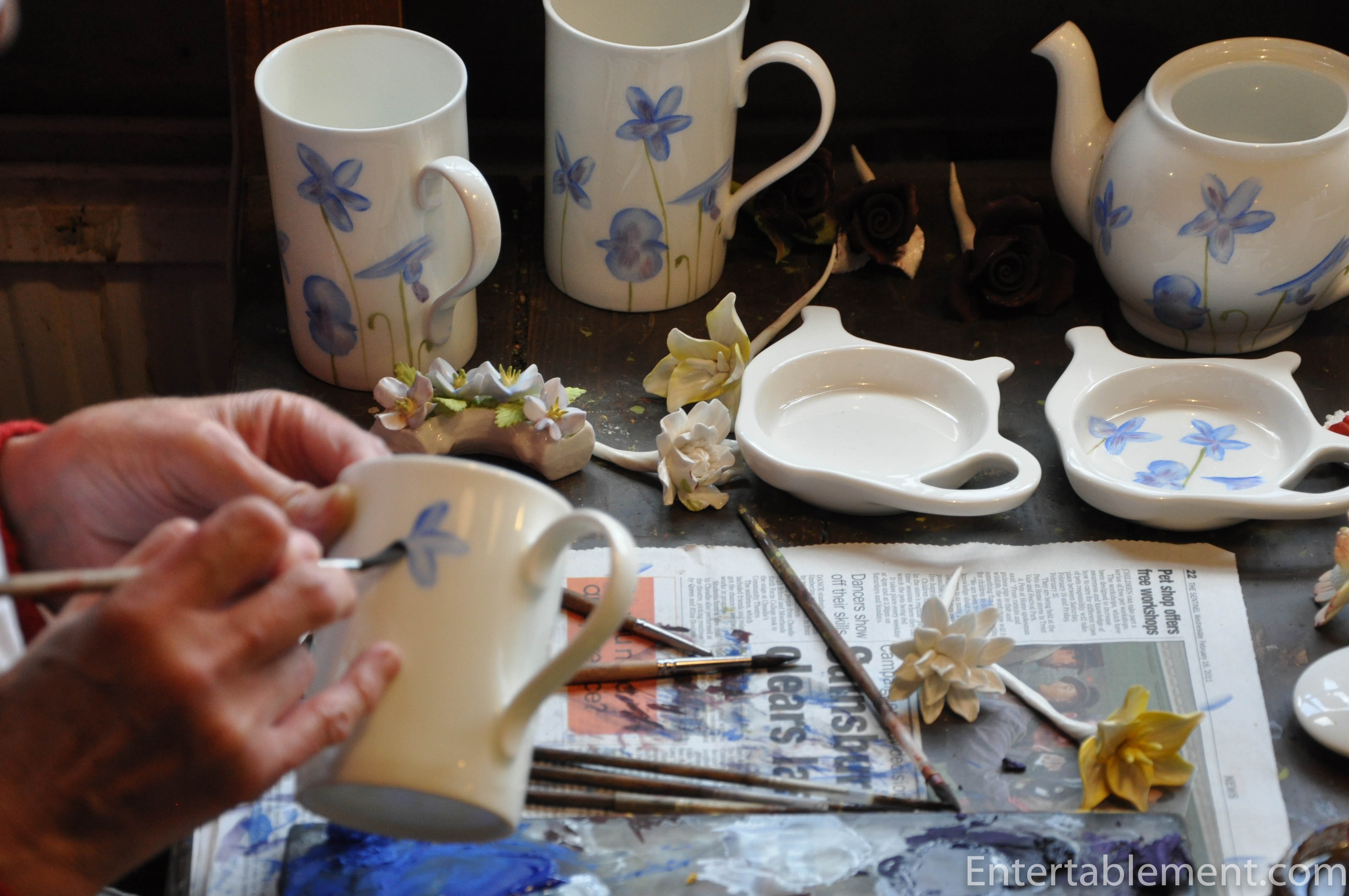 Then we saw the glazing, decorating, and gilding. The painters and gilders had the best jobs, working in warm, well-lit studios at the top of the buildings. Hours were long, but the most skilled were relatively well-paid. The work they turned out was incredible for its exquisite detail. This lady was giving a demonstration of the painting techniques on modern wares.

The main downside of the glazer’s job in historical times was exposure to lead and other chemicals in the glazes, which often caused facial damage as their nasal tissues succumbed to the poisons over time. Manufacturers were resistant to change, as many of the bright colours in the glazes proved difficult to duplicate without the deadly toxins. It took a lot of persuasion and chemical advances to make glazes safe for workers and consumers. 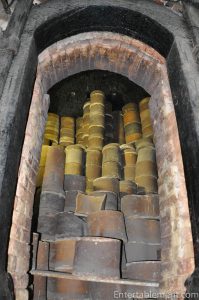 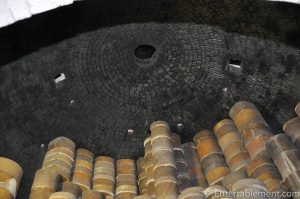 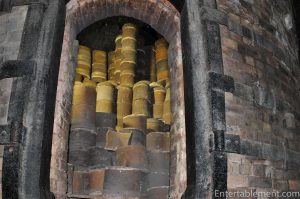 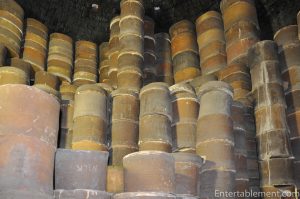 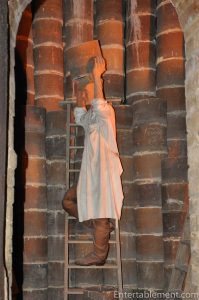 Removing the saggars was a hot and dangerous job

The worst job of the lot was emptying the bottle ovens after a firing. Filled with saggars (the clay containers in which the cups, plates, etc were placed for firing) from top to bottom, the emptying process began as soon as the three-day, coal-fed 1200° C firing had finished, while the oven was still blistering hot. Cooling time was downtime, and nobody got paid for downtime, so the workers wrapped wet sheets around their heads, tried to shield their eyes and lungs, and in they went. The ovens had to be emptied from the top, naturally, which was the hottest place. It took about 5 hours, and no sooner was it emptied, but it was filled for the next firing. The saggars weigh about 25 kilos when loaded, and were carried on the top of the head, up and down the ladders.

In addition to the dangers of heat, a condition called “Potter’s Rot” or Silicosis as it’s now known, was prevalent. Earthenware and stoneware pottery has a high silica content, and when the pots were scraped prior to glazing, a lot of free silica was released and breathed deeply into the lungs of the workers, causing shortness of breath, coughs, fevers and cyanosis.

All in it was a riveting and sobering day; the films of the processes were fascinating. I have an entirely new level of appreciation for how difficult the industrial revolution was for our forebears. Farming was hard, and clearly many people voted with their feet to take up industrialization, leaving the agrarian life behind. What they got was a different kind of hard, it seems. We have a lot to be thankful for.