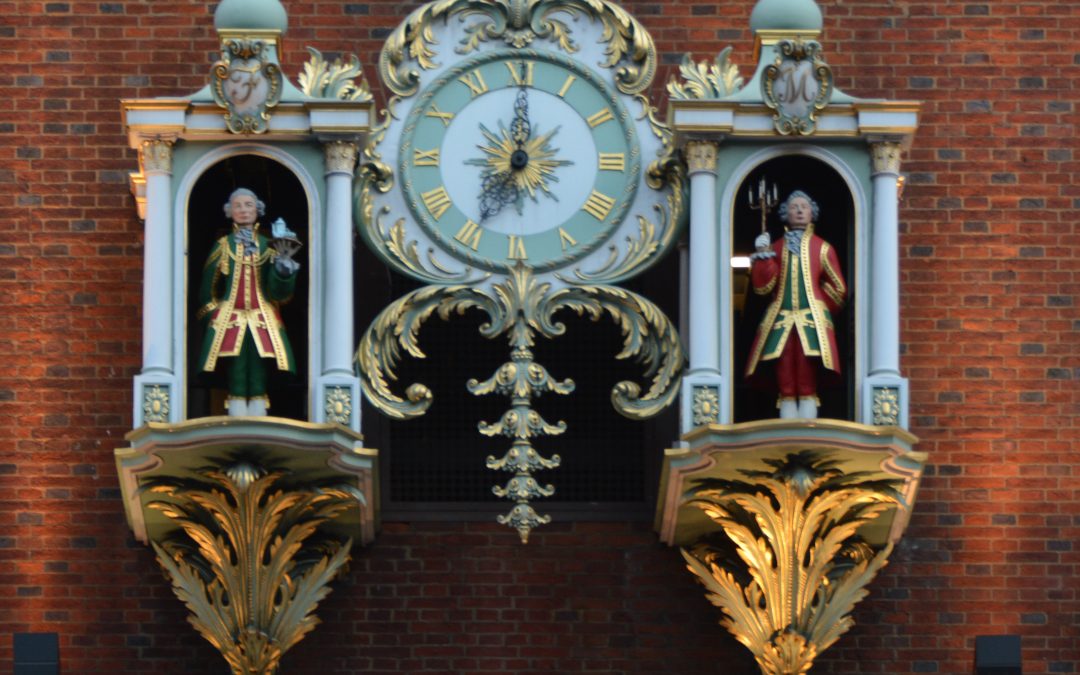 A trip to Fortnum & Mason is always high on my list of priorities soon after we arrive in London. While Fortnums are probably best known for their luxury hampers, the entire store overflows with tempting goods, from teas to liquors; spices to biscuits; scarves to cufflinks. There is something for everyone!

Situated along Piccadilly, the shop’s windows are always a delight to the eye. 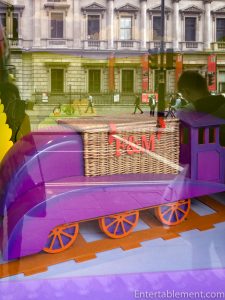 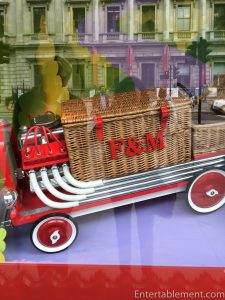 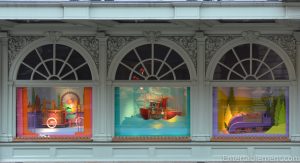 The front windows this time were devoted to their famous hampers incorporated in various vehicles including a train, a fire truck, an airplane, a submarine, and a rocket ship.

The windows around the corner were dazzling with luxury goods in deep fall colours. 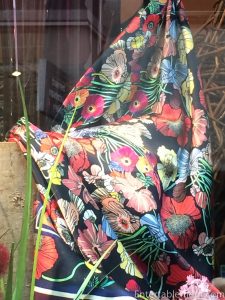 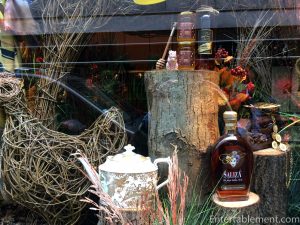 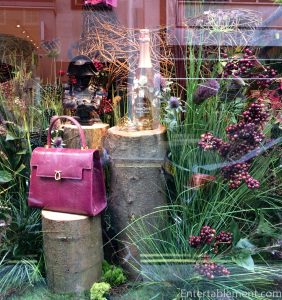 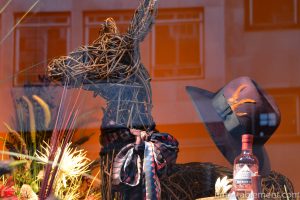 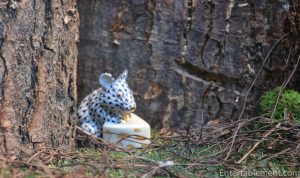 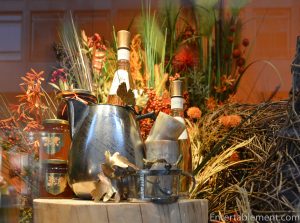 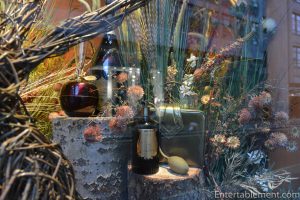 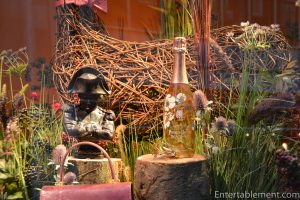 I was doing my best to get photos without glare, and that involves putting the camera lens right up to the window. I was sure the security guard was giving me the hairy eyeball, but he’s probably used to zany tourists taking photos…

Similar figures (in differently coloured apparel) appear in the four-ton clock over the main entrance on Piccadilly, which was commissioned in 1964 by Canadian businessman, W. Garfield Weston, who had acquired the store in April 1951. 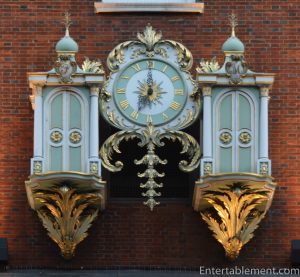 On the hour the doors open 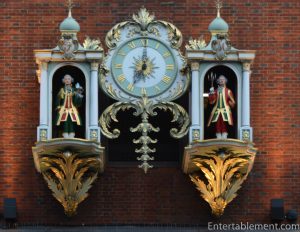 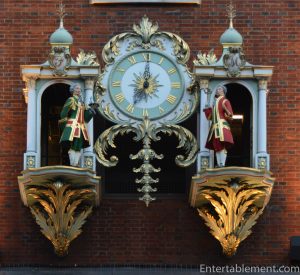 Bow tower one another 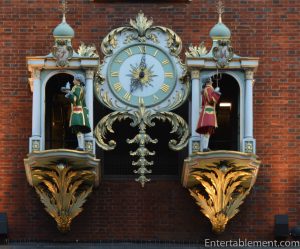 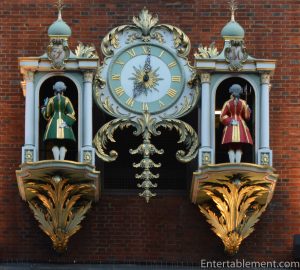 Move back to the doors 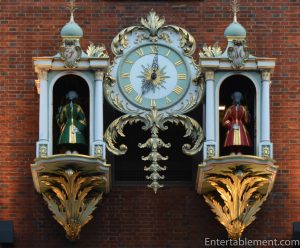 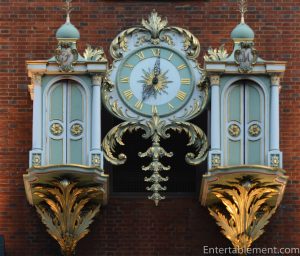 And the doors close once more

Every hour, the 4-foot-high models of William Fortnum (who was a footman in the Royal Household of Queen Anne) and Hugh Mason (with whom he went into business) emerge and bow to each other. I know it’s every hour on the hour, because, misinformed, I set off in time to get photos at a quarter to the hour. The clock chimes on the quarter hour, but no figures emerge. So I hung around outside the shop, camera in hand, and was treated to a diatribe from a street person who took exception to my encroachment on their space. Sigh. Precisely on the hour, the figures come out to the accompaniment of chimes and 18th century music. It’s really delightful, and was well worth the wait.

The first store opened in 1707 in St. James’s Market. The whole thing began because the Royal Household of Queen Anne insisted on using brand new candles each day and not relighting old ones – a massive extravagance. Footman William Fortnum resold the half-used ones for a nice profit, and also had a sideline business as a grocer. I can just envision the enterprising nature of Mr. Fortnum, who also talked his landlord, Hugh Mason, into a partnership. Probably needed the capital, because he had nerve enough for both of them… Well, it apparently worked out well for both of them!

Aren’t these confectionary gorgeous? I’m not a fan of marzipan, but the sheer beauty of them is enticing. It makes me want to bake a Christmas cake and decorate it with them.

Speaking of Christmas, they had already put out their display of advent calendars.

We have very similar ones in our family. I bought each of the “households” one for the grandchildren and fill them every year with chocolates, Playmobil Christmas toys, hair clips, etc. for the little girls.

The calendar are wooden, about 2″ deep and each door is about 2″ wide, so you can get a good variety of objects inside. It’s one of my favourite Christmas preparation activities, and I start looking early in the year for new things to put inside. Some of the calendars have identically sized doors and others have doors of various sizes, so it gives a lot of scope. My final stop is the Lindt outlet for truffles. Mmmmmmm.

The spice display on the bottom floor really caught my eye. The top row is salts, the second row is peppers, then all the various spices in brightly coloured tins.

They have regular events at the store, as well. (Sorry for this poor quality shot.) I was trying to capture the chalk board announcing Hugh Bonneville from Downton Abbey as an auctioneer at one of the upcoming events – a honey auction! Now that would be fun! 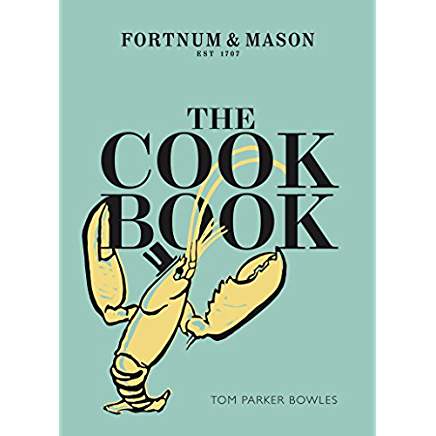 On a recommendation from the Globe & Mail, Glenn bought me the Fortnum & Mason cookbook for a surprise gift. I read it cover to cover. It’s a marvellous book, engagingly written and filled with recipes from their restaurant. 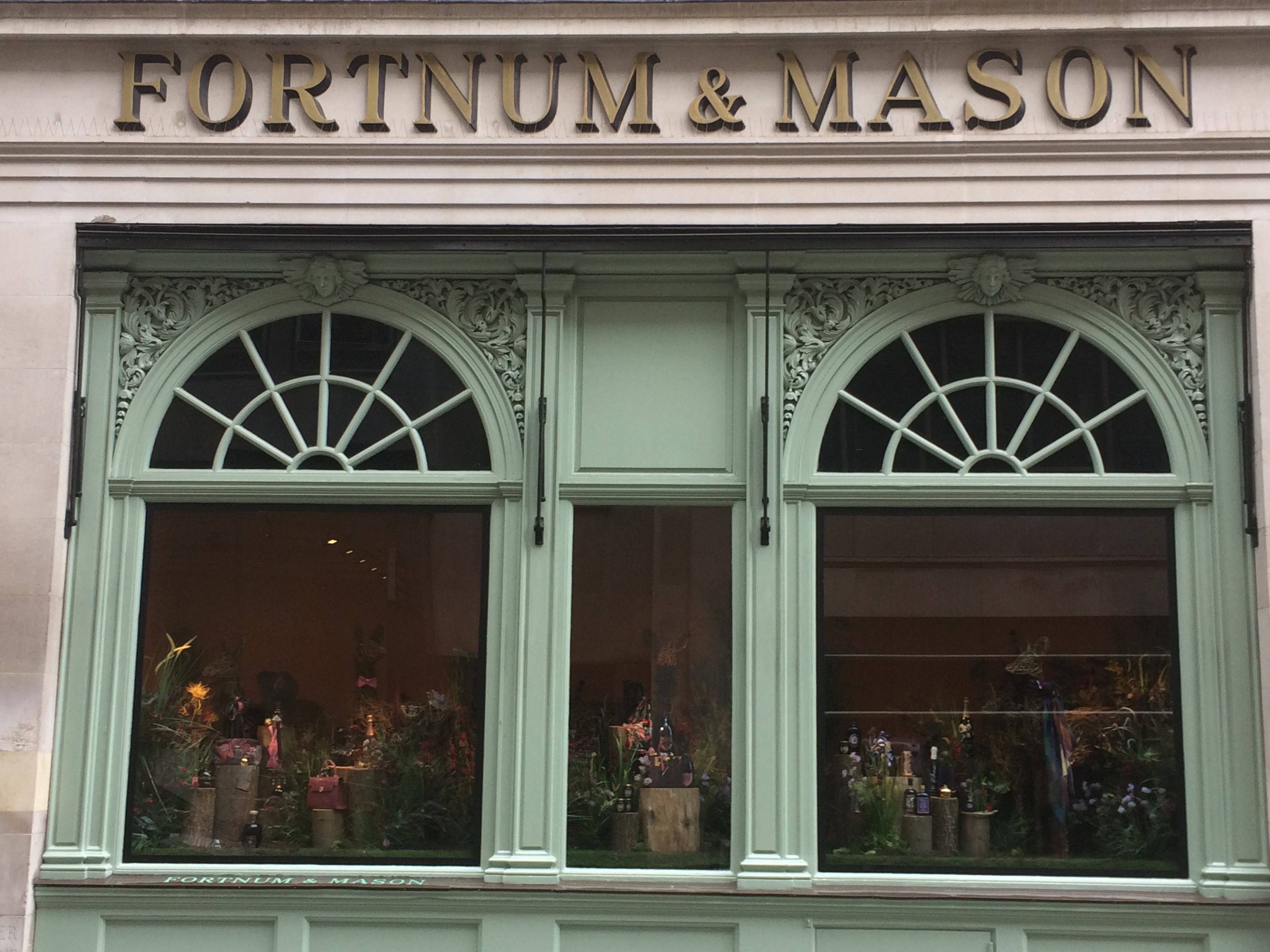 If you’re ever in London, be sure to stop by. The restaurant offers tea, which comes highly recommended. Next time!  Can’t cram everything in, no matter how hard I try.

i’m sharing this post with Between Naps on the Porch.