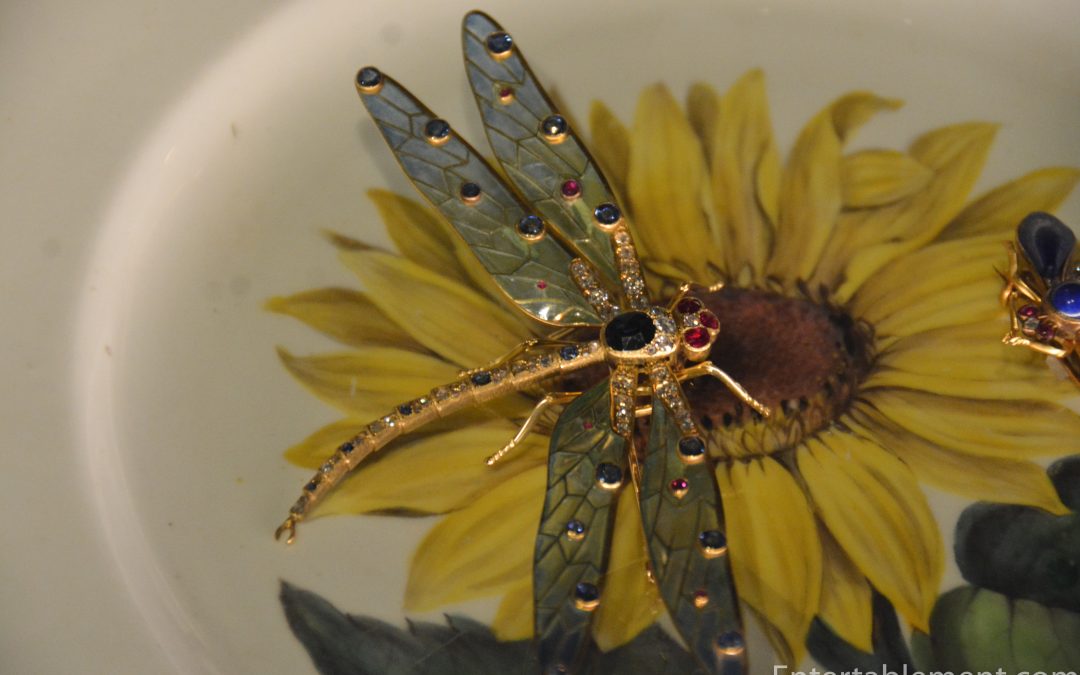 “Debo”, the late Dowager Duchess of Devonshire, collected insect brooches, among other quirky things such as Elvis memorabilia. Really. Elvis... 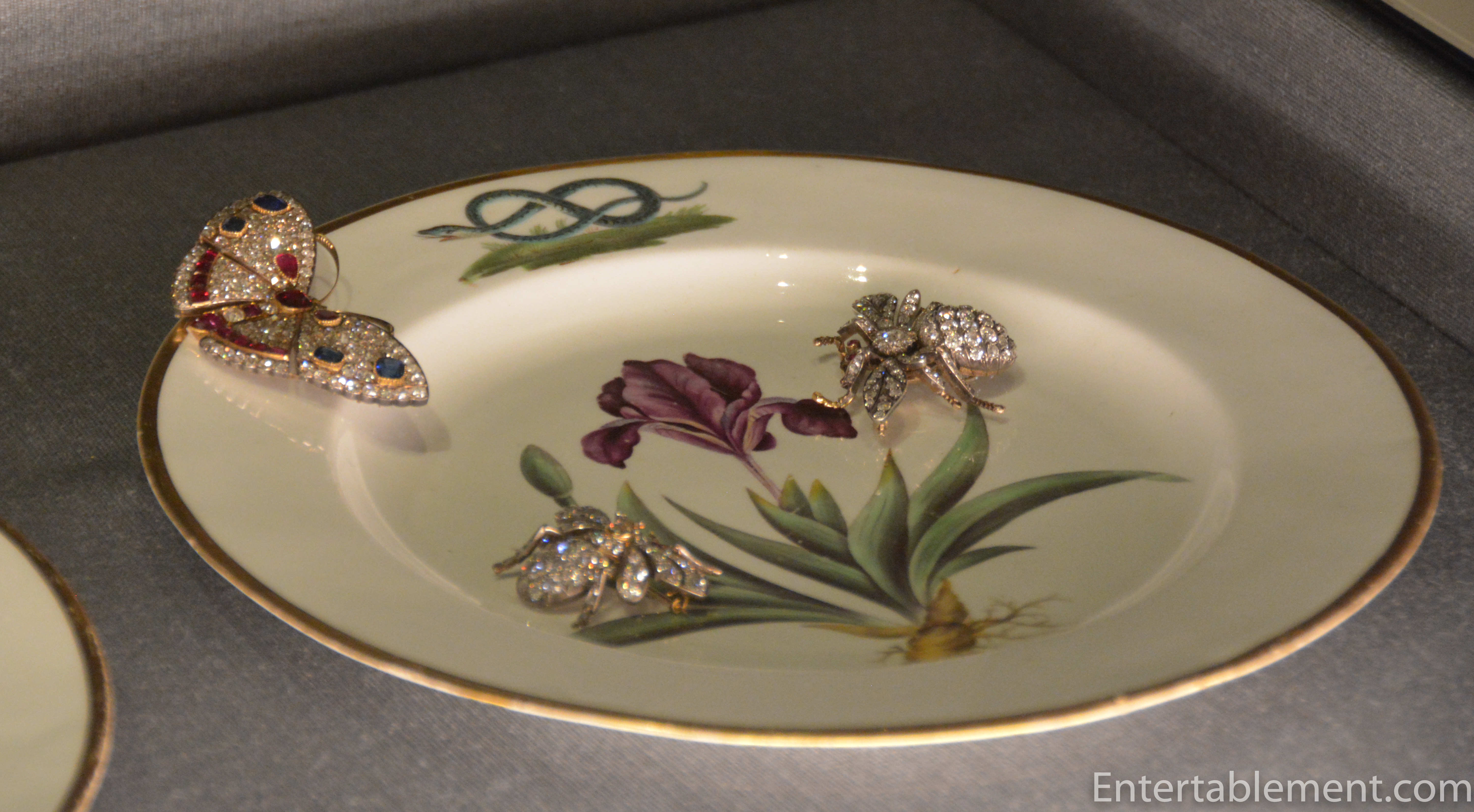 As part of the House Style exhibit we saw on our recent tour of Chatsworth, a number of the brooches were imaginatively arranged on botanical-themed porcelain — insects lighting on the flowers on the plates. 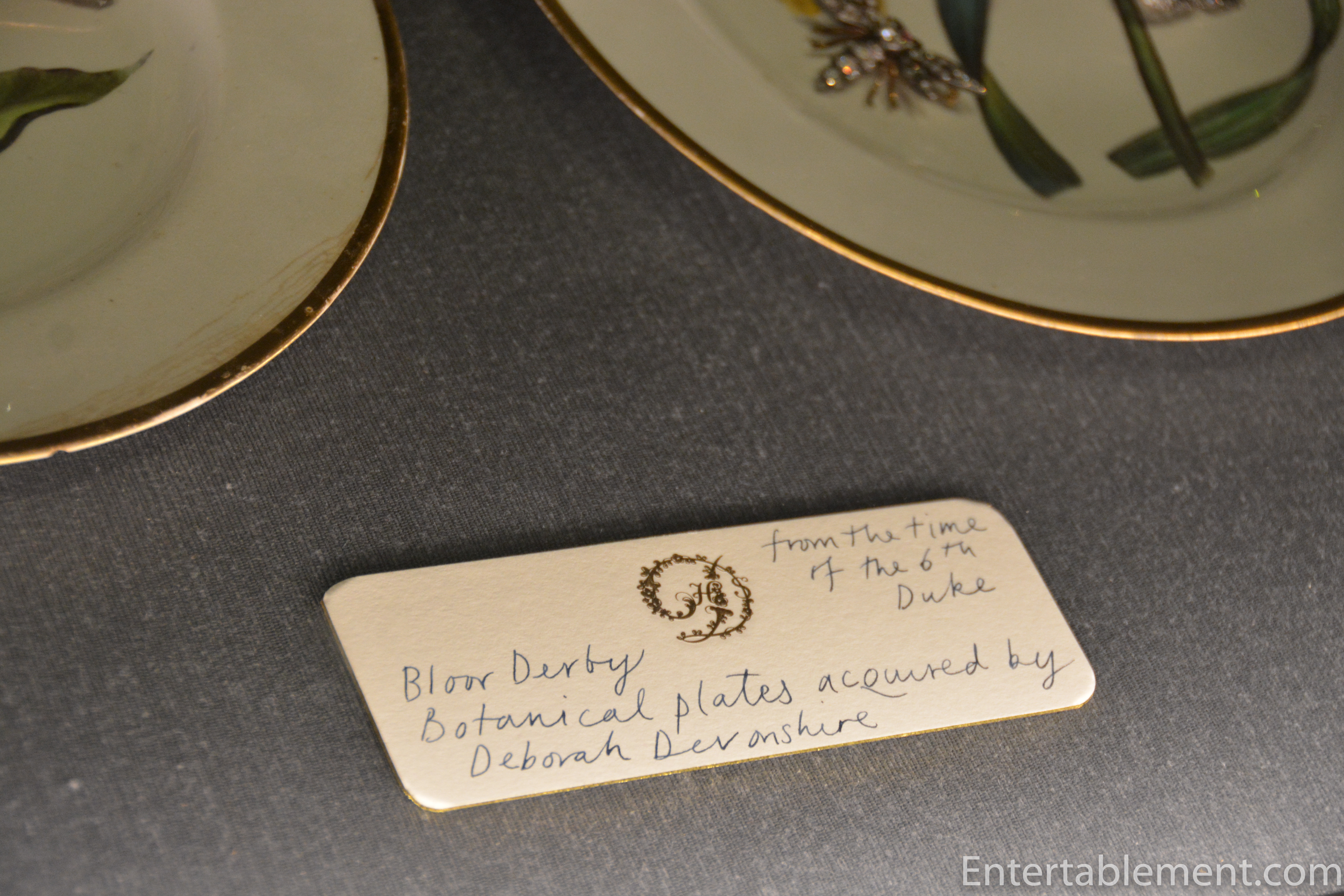 According to the little explanatory card in the case, the plates are Bloor Derby and date from the time of the 6th Duke, so that would have been mid-nineteenth century. The Bachelor Duke, as the 6th Duke was known, was a great collector, and acquired many of the treasures at Chatsworth. 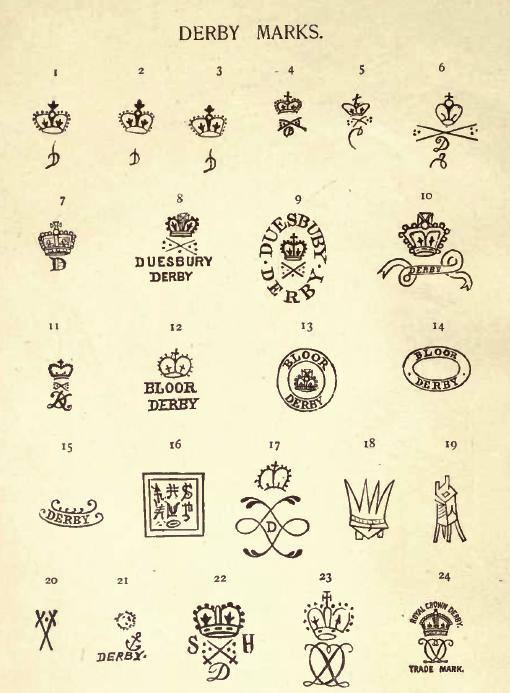 Wikipedia has a handy summary of Derby marks; Bloor Derby was produced between 1811 and 1849. 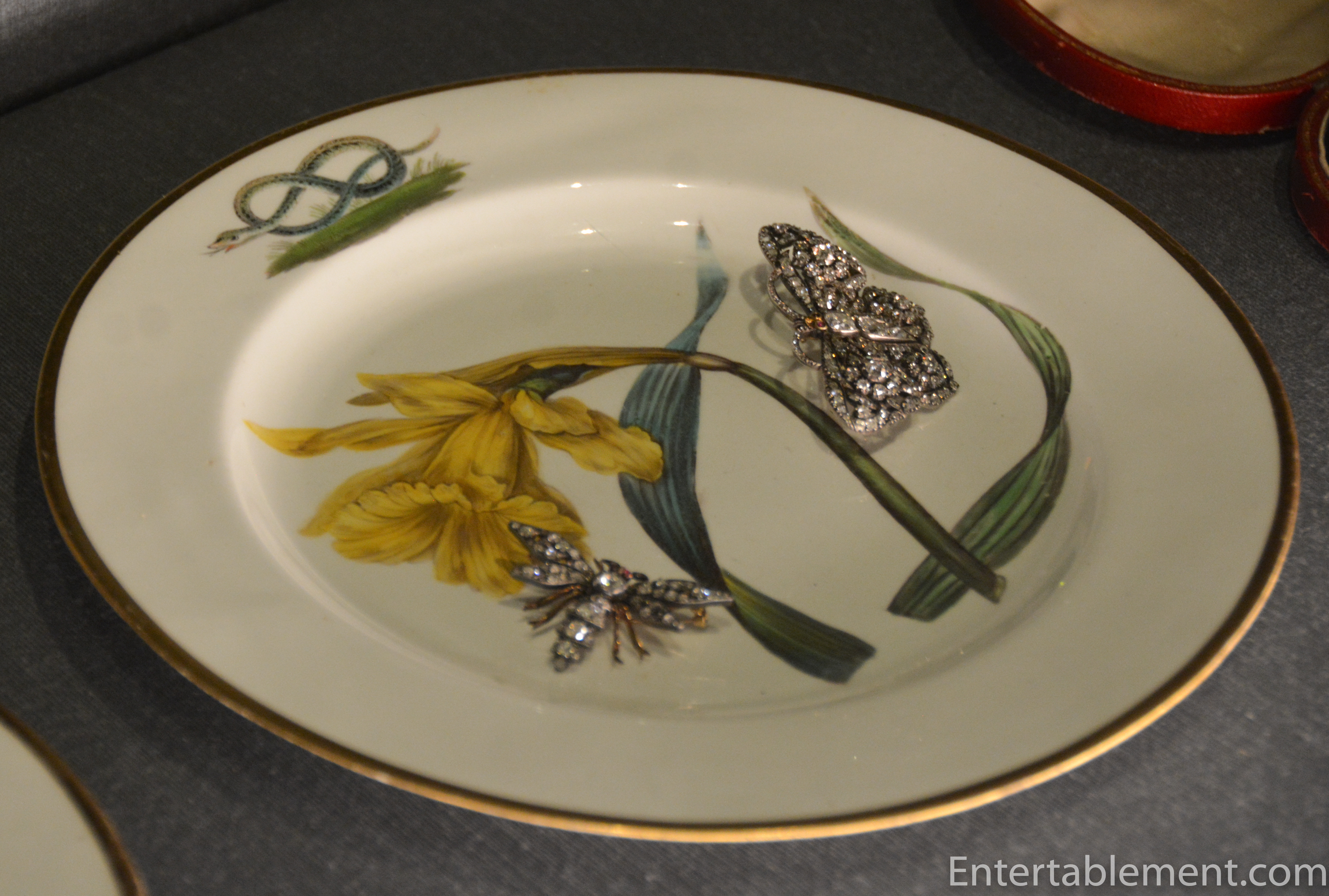 The plates-with-brooches were in a fairly dimly lighted room, so a steady hand on the camera was required. Between jostling crowds and gimlet-eyed docents, this was no small feat. Risking glares and sharp elbows, I pressed my camera lens as close to the display cases as I could manage. Happily, no mishaps ensued. 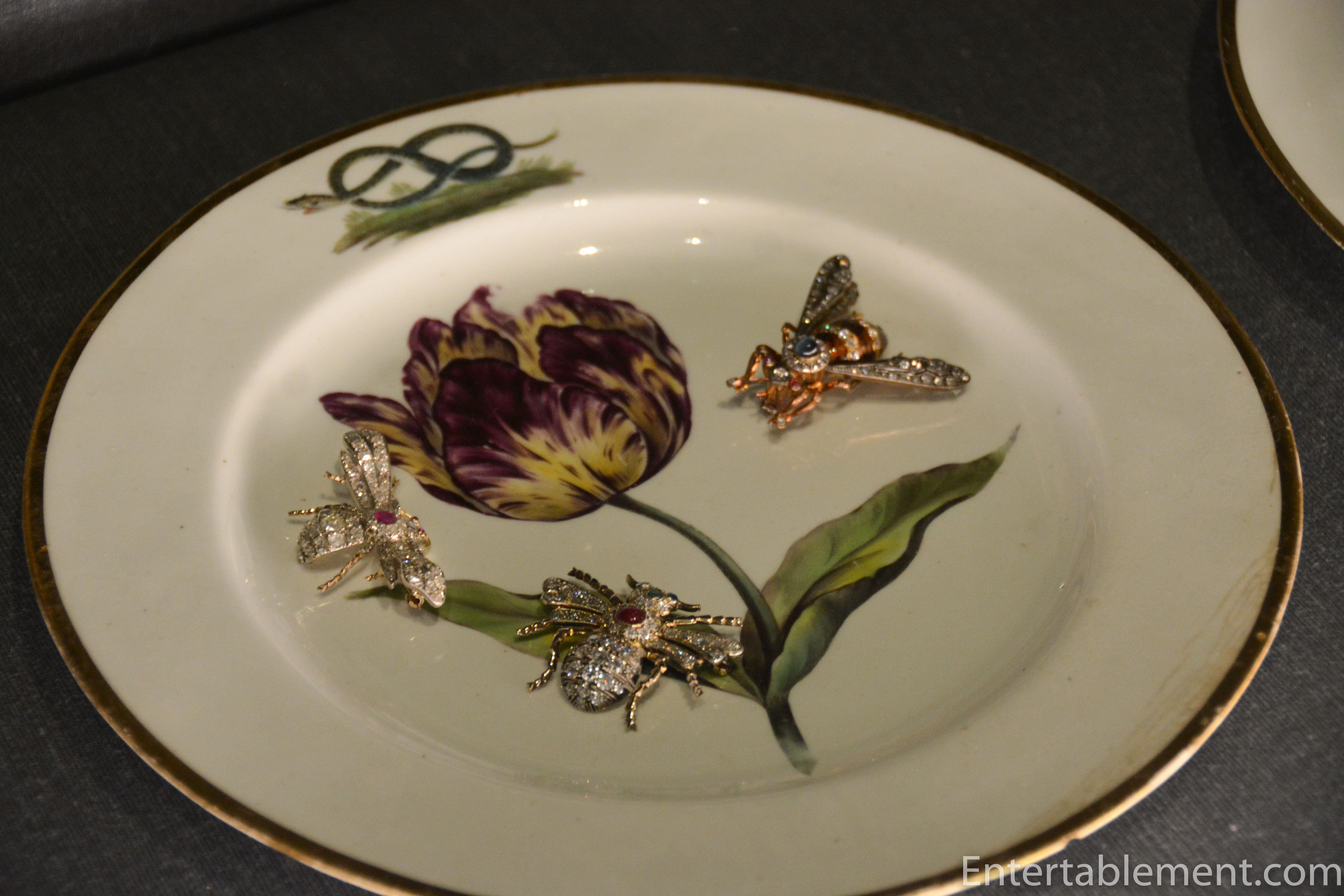 I love the deep purple parrot tulips touched with yellow, depicted on the plate. The brooches are pretty, too! 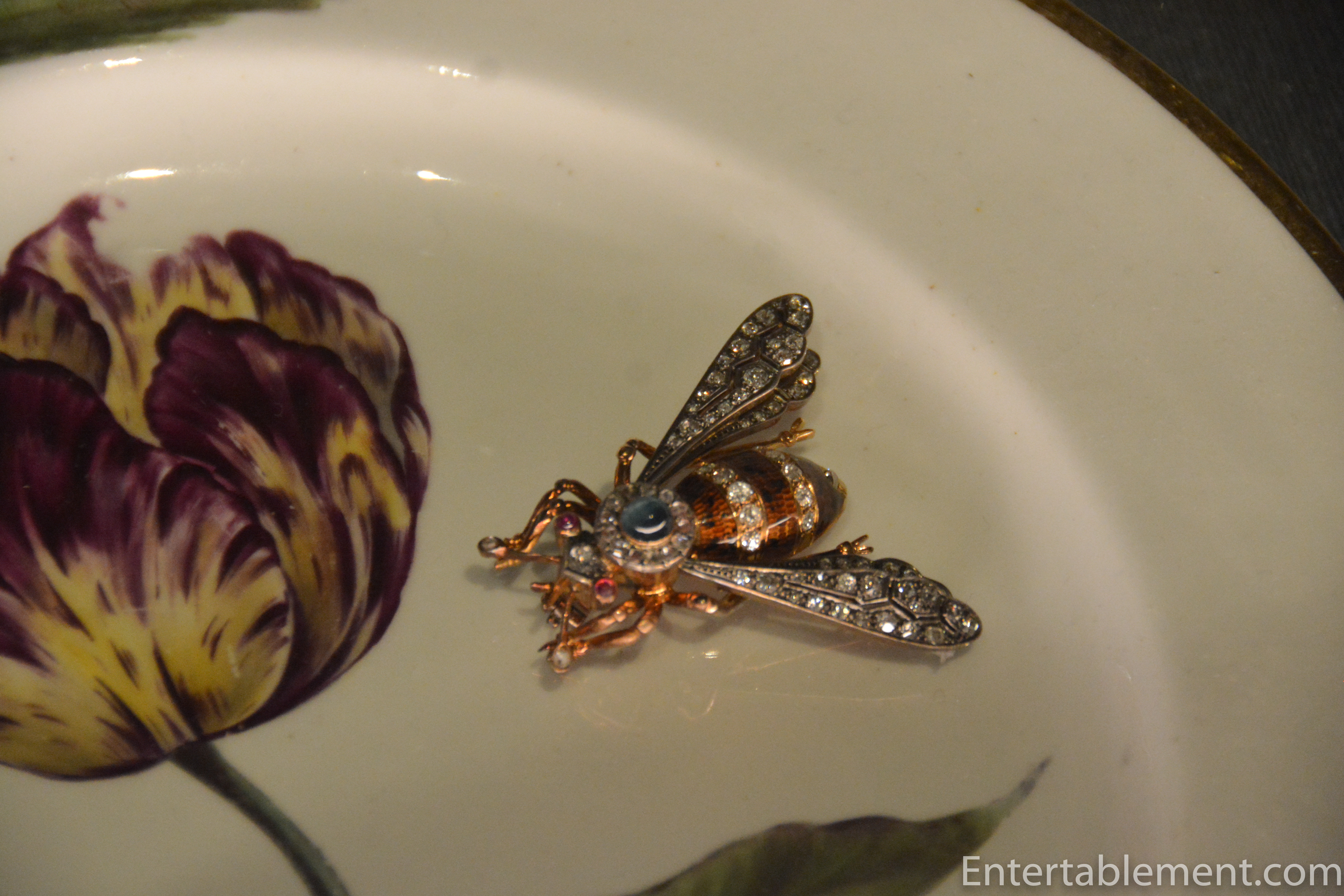 A close-up of one of the brooches. I’m not an insect expert, so not sure what this bug is 🙂 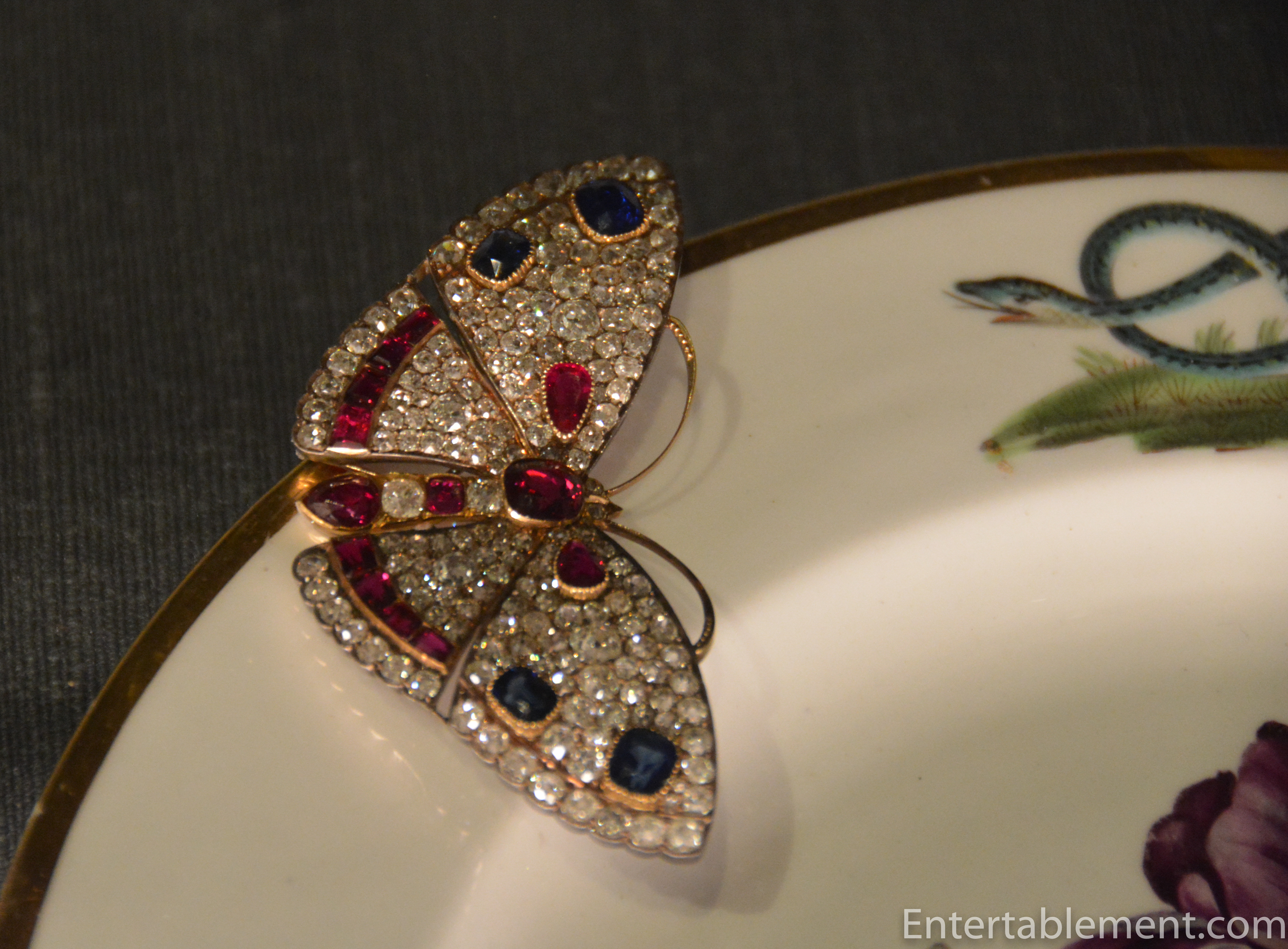 But can be reasonably confident that this one is a butterfly. 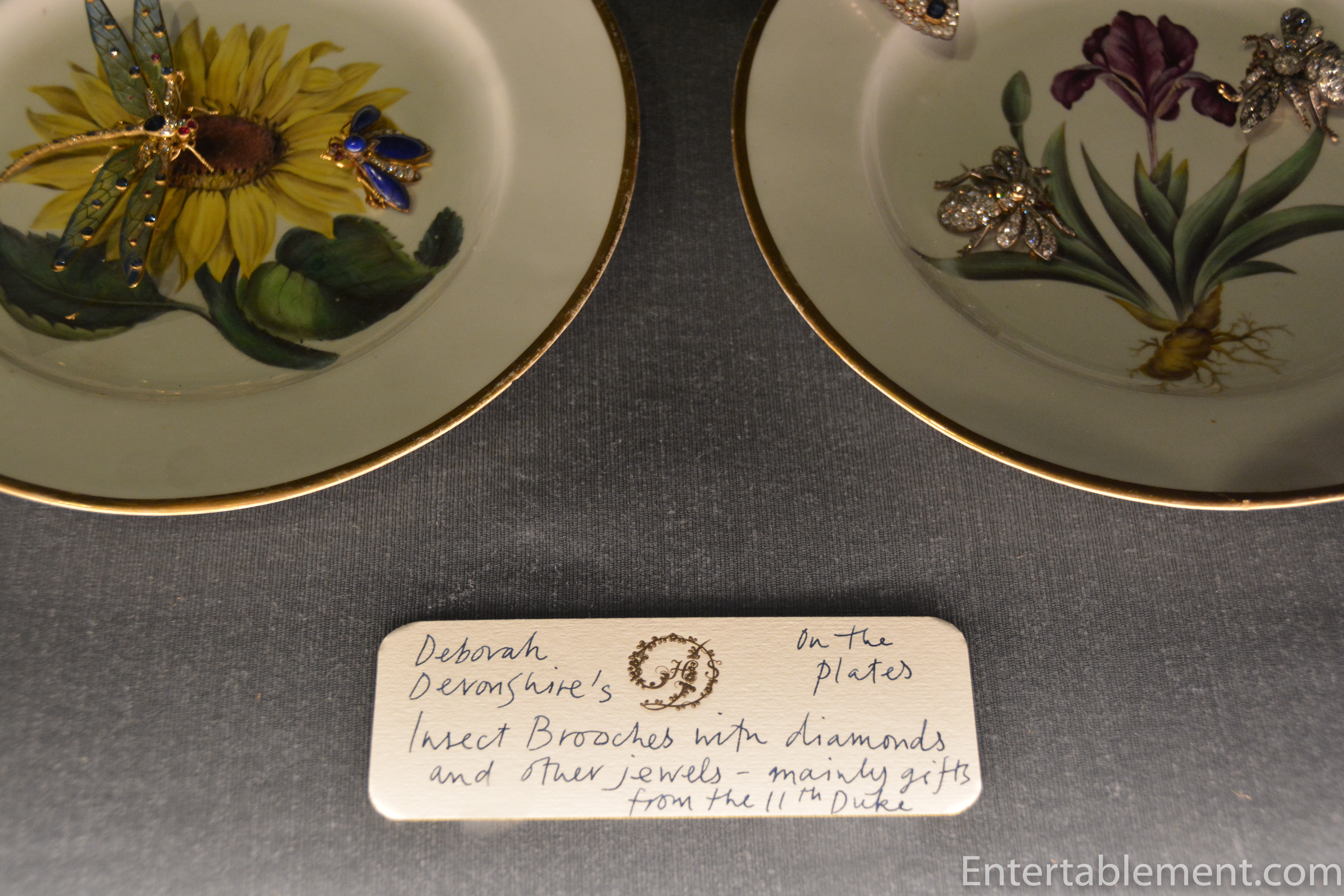 Apparently many of the brooches were gifts from her husband, Andrew, the 11th Duke of Devonshire. 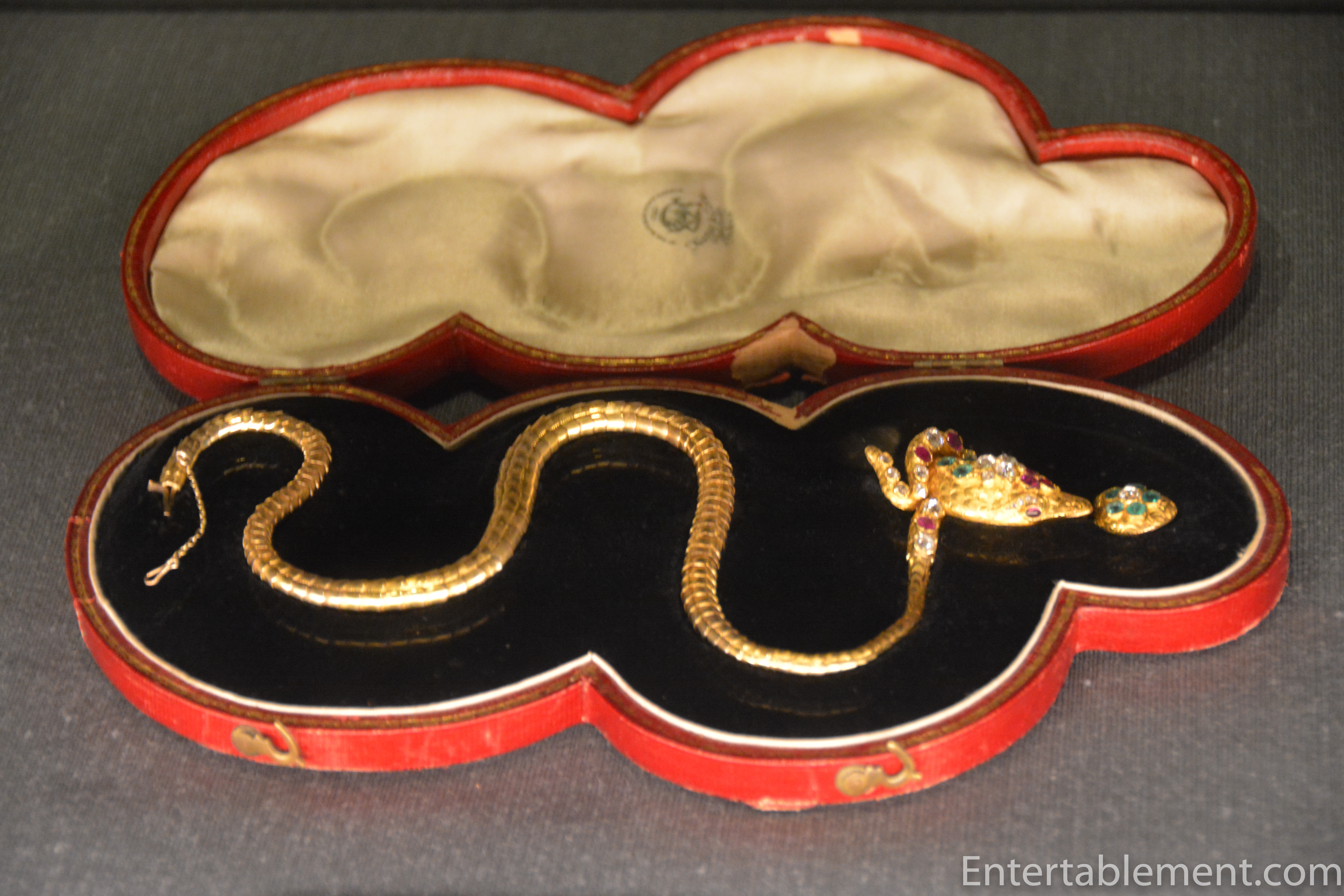 There was also a serpent piece (shudder – I detest snakes). 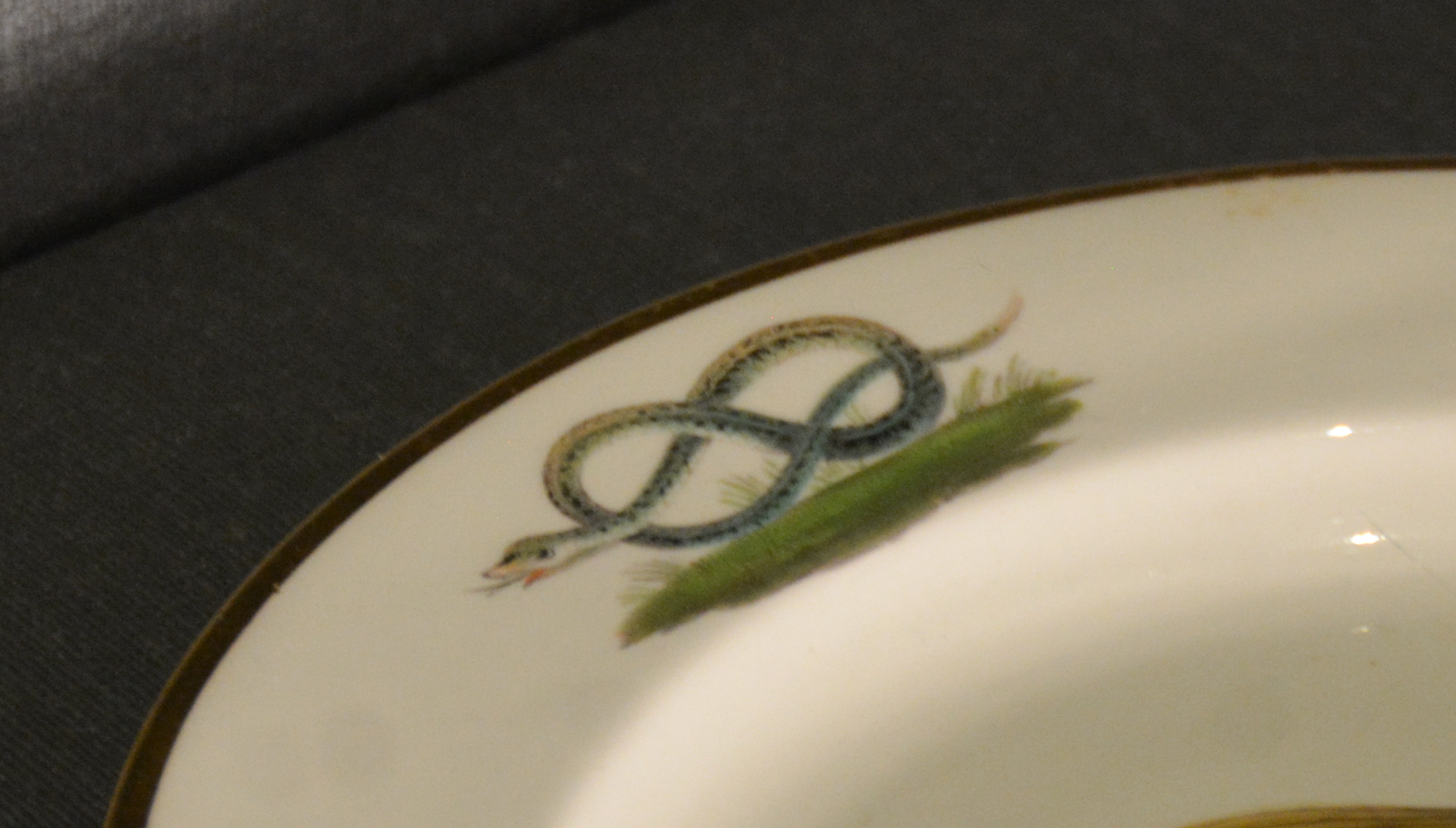 Serpents are one of the symbols of the Devonshires, and are included in the family crest. This is a closeup of the serpent on the plates, so I take it the plates were custom made for the 6th Duke.

More of the brooches were displayed on a gown in the “Shall We Go Through” exhibit in the Dining Room at Chatsworth. 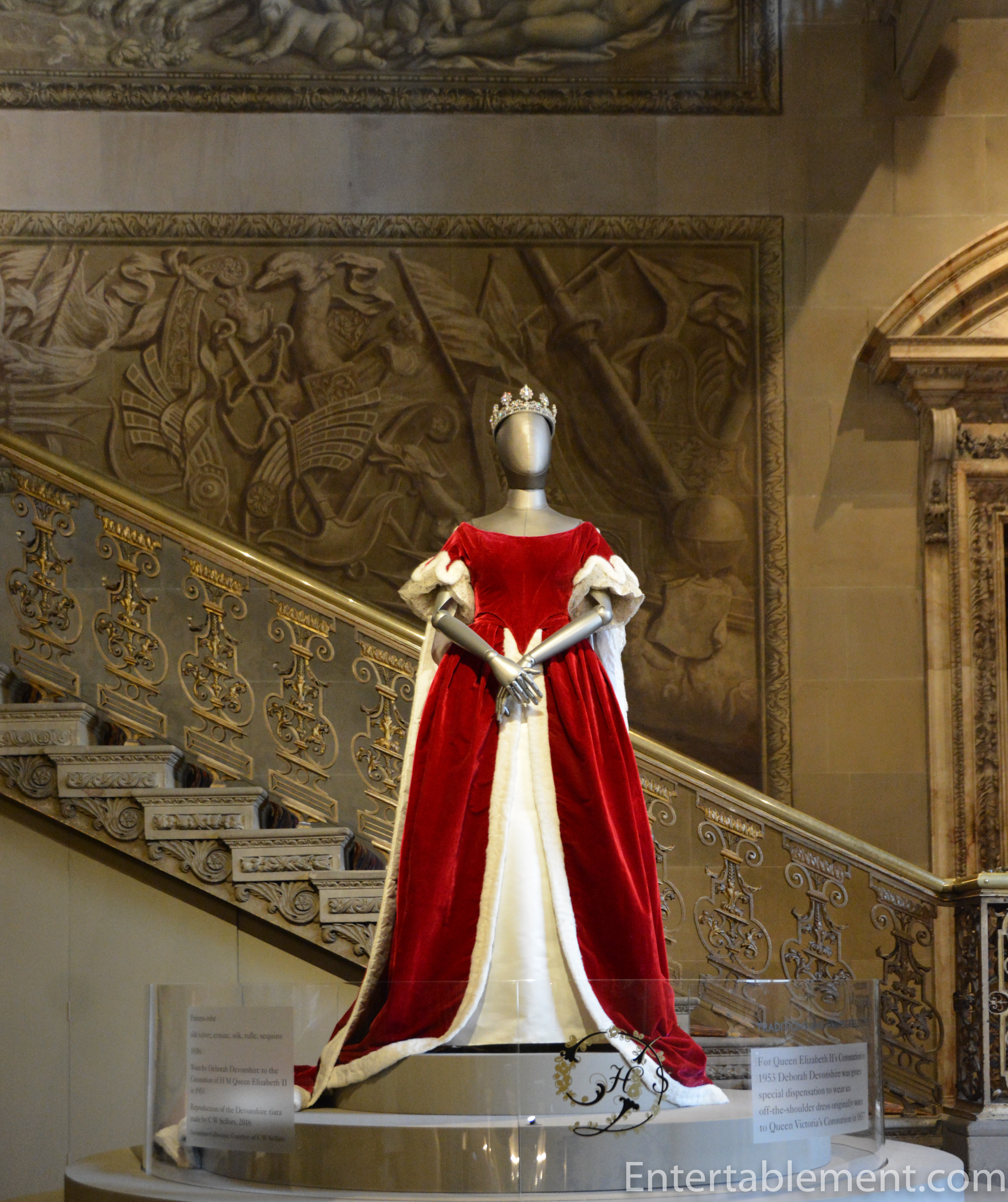 I have one more post to do on the Fashions we saw at Chatsworth, including the gown  and tiara the late Dowager Duchess wore to Queen Elizabeth II’s Coronation in the mid 1950s. The same gown was worn by one of the earlier Duchesses to the coronation of Queen Victoria. Between the high quality silk velvet and the ermine trimmings, these gowns are very pricey, and are preserved for decades. 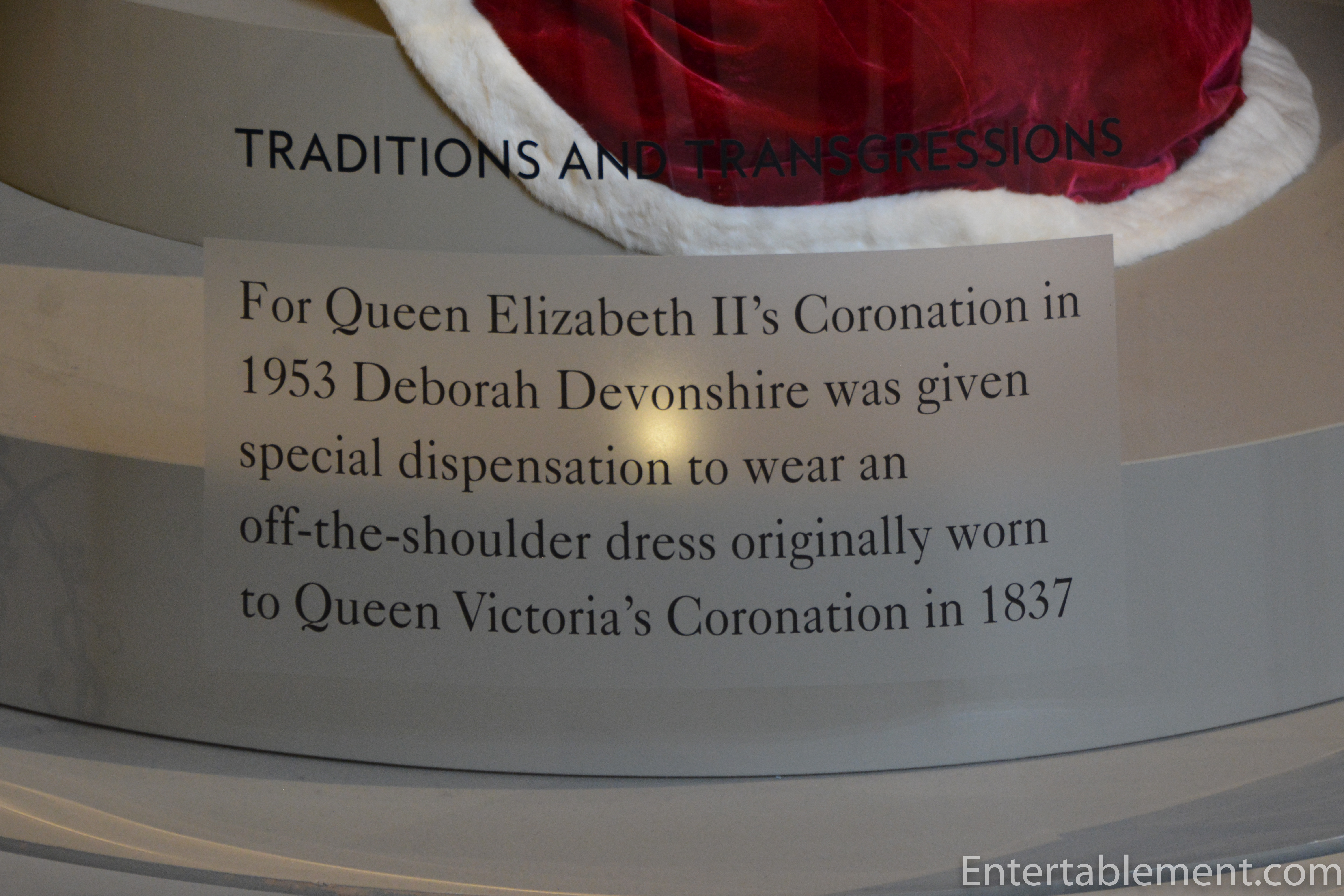 She had to get special permission to wear this particular gown, as it was off the shoulder, and contravened the then-current dress code for Queen Elizabeth II’s Coronation. Permission was granted, and off she went, regally attired in crimson velvet and ermine. 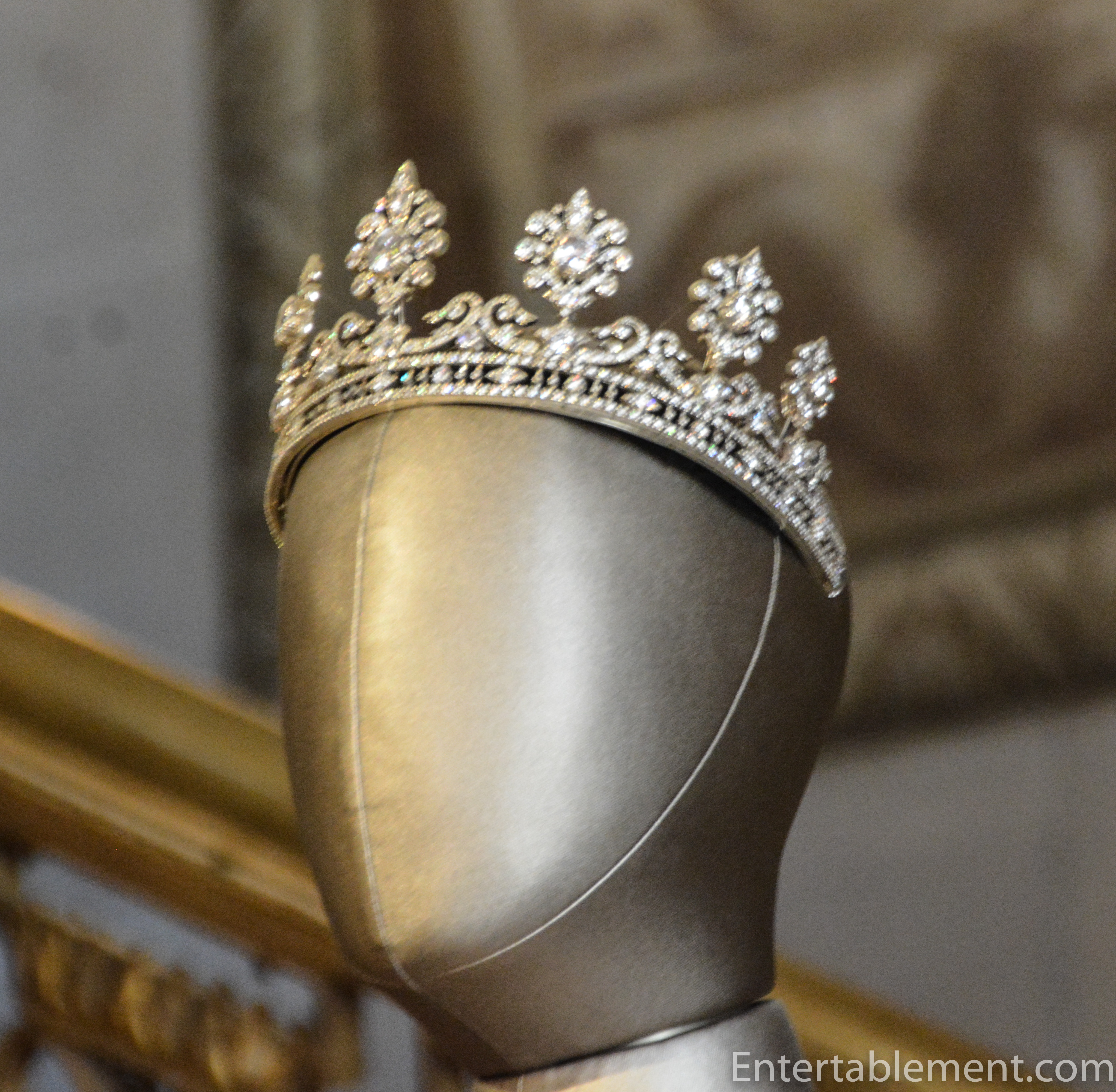 The tiara that went with the gown. I suspect this is a replica, but you get the idea.

In the meantime, if you want to know more about the fascinating Deborah Devonshire, Amazon describes her memoir, Wait For Me “is written with intense warmth, charm, and perception. A unique portrait of an age of tumult, splendor, and change, it is also an unprecedented look at the rhythms of life inside one of the great aristocratic families of England. With its razor-sharp portraits of the Duchess’s many friends and cohorts—politicians, writers, artists, sportsmen—it is truly irresistible reading, and will join the shelf of Mitford classics to delight readers for years to come.”   It’s well worth a read. And for more on what was involved in bringing the estate back to life after WWII, Chatsworth,The House, is also excellent. 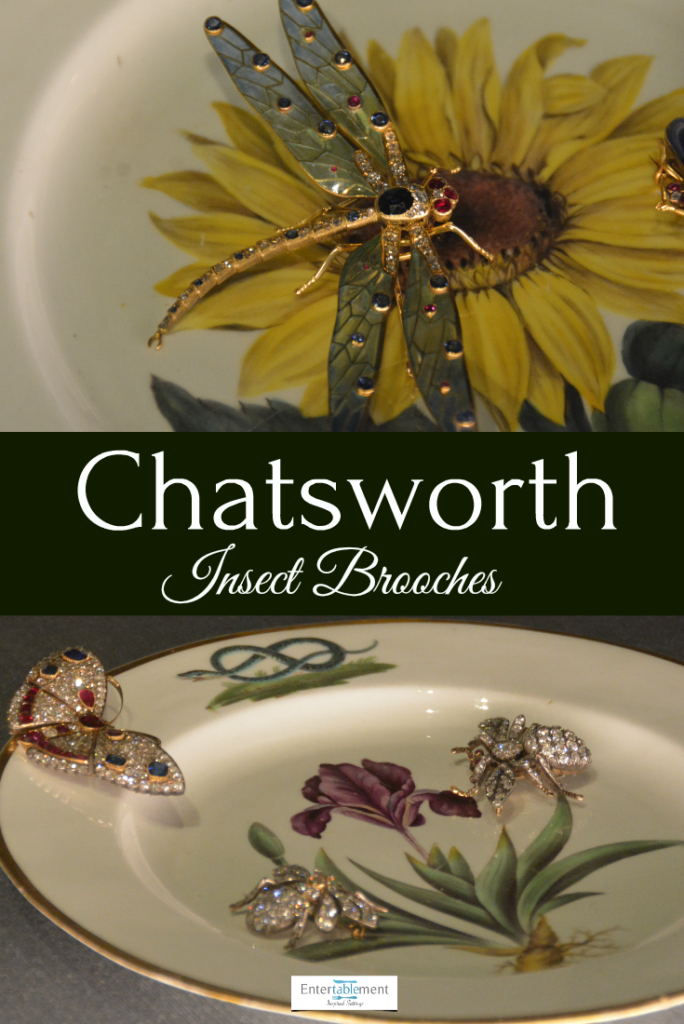 Have a great weekend, everyone.