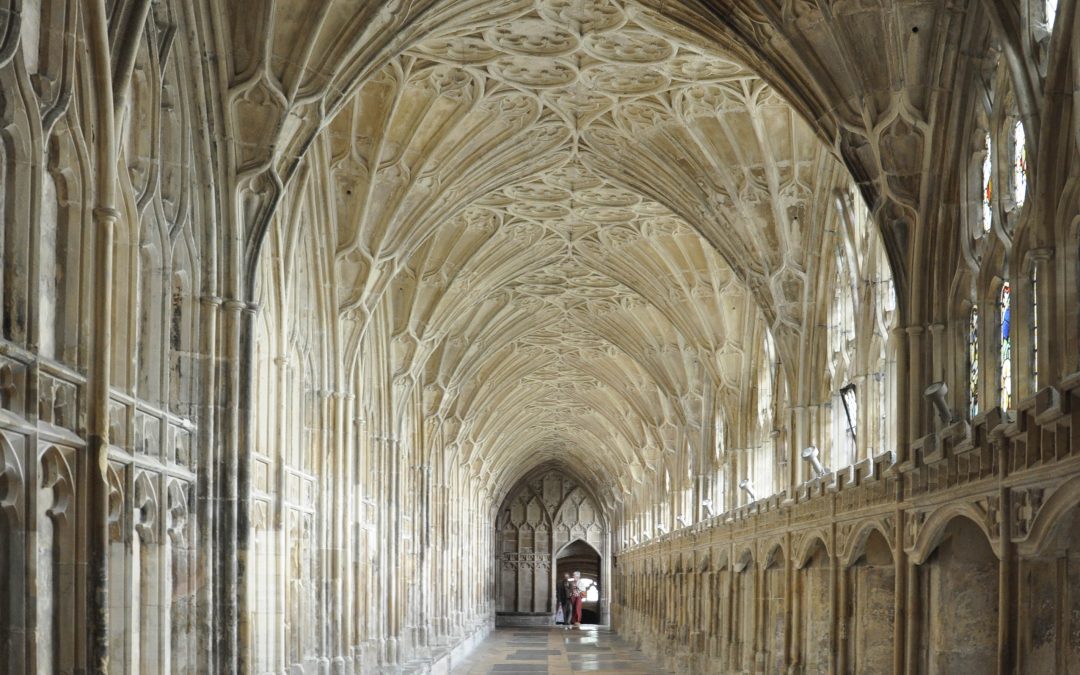 When on holiday, some people do pub crawls. I tend more to Cathedral marathons, and Gloucester Cathedral is one of my all time favourites, largely due to the cloisters, the quadrangle of ancillary buildings to the Cathedral proper.

Aren’t they gorgeous? They were built to house the monks, providing space for them to work, live, and meditate. The sections you see are carrels, or niches, which would have held desks for the monks to study. 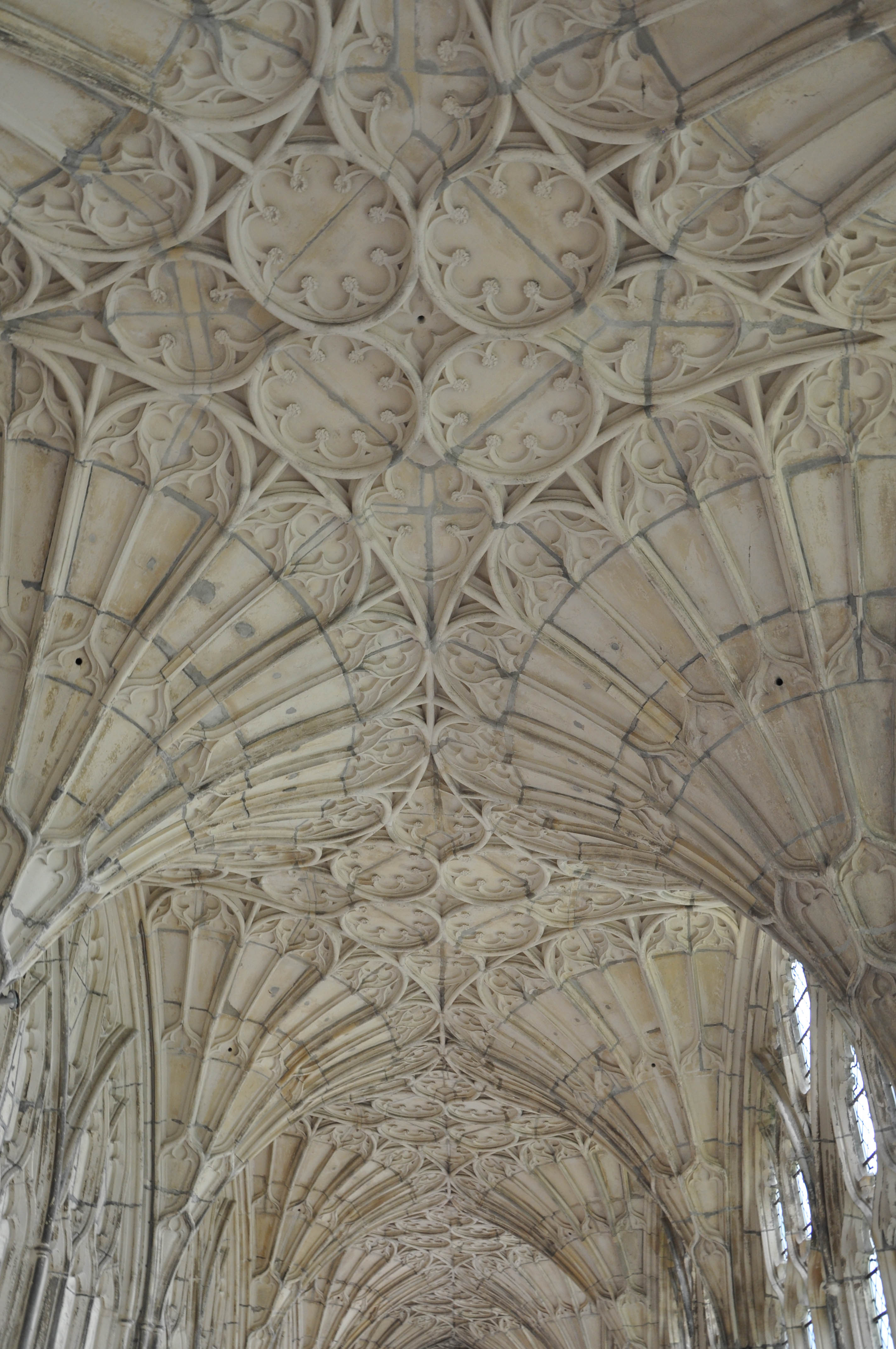 According to the Cathedral’s website, the fan vaulting is among the earliest examples in England. 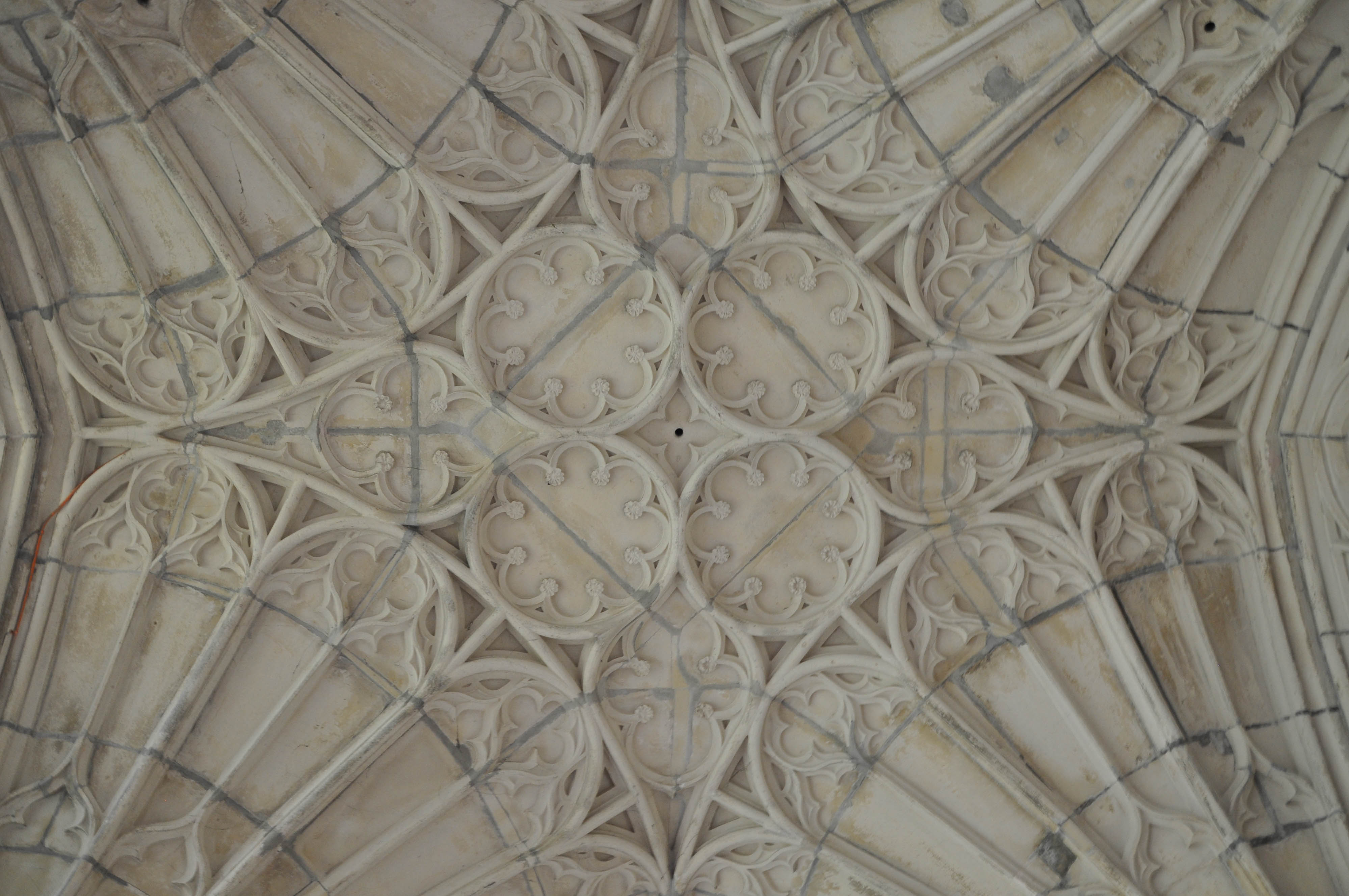 You may recognize the space from several Harry Potter films. 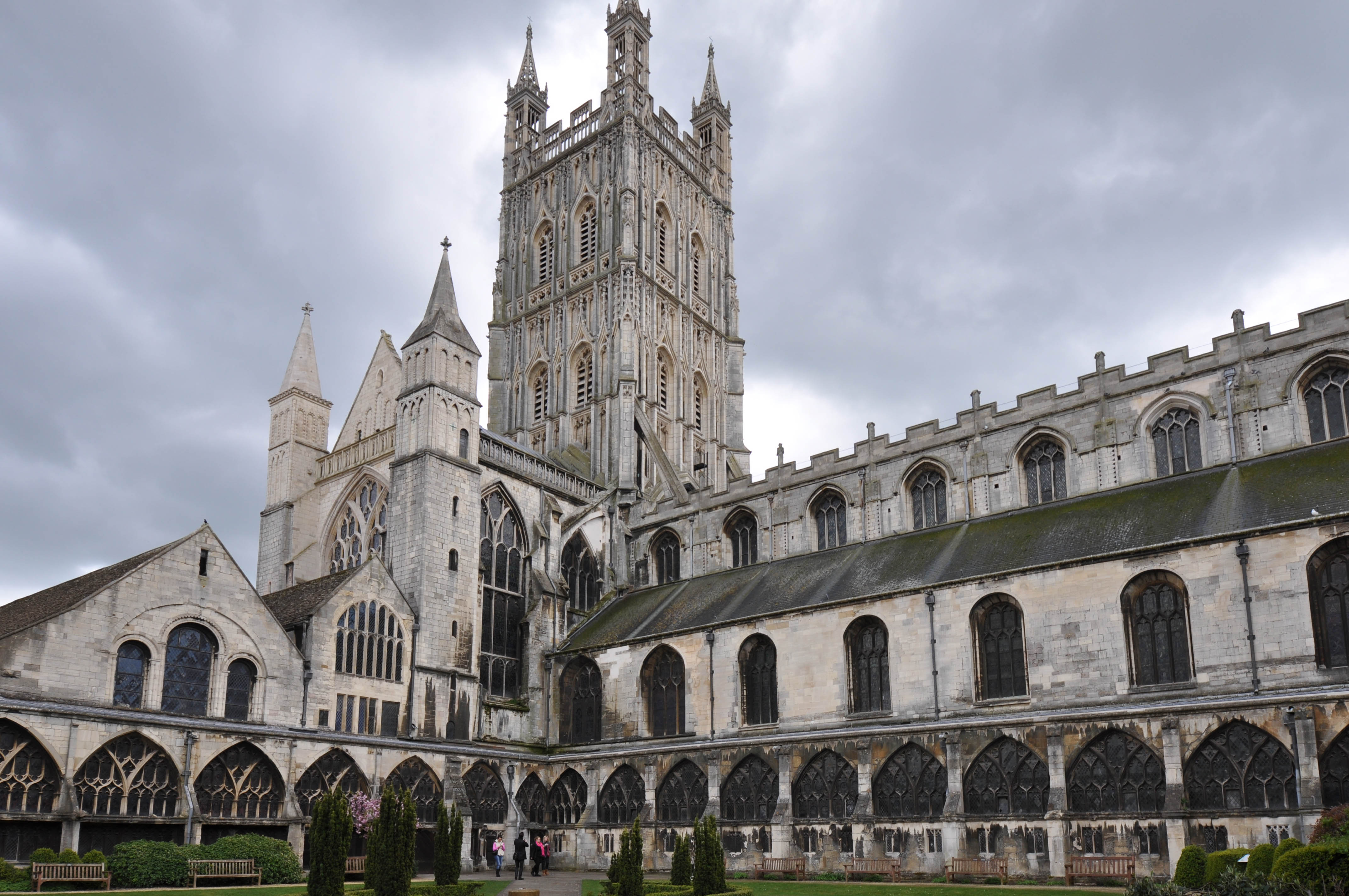 Here you can see the cloisters from the outside. They’re built on the north side of the Abbey, which is unusual; normally they are clustered around the south in order to gain the maximum amount of light.

The Garth, in the centre of the cloister’s quadrangle is a lovely place to sit and gather yourself, as well as get a fabulous view of the tower.

The current Cathedral was begun in 1089, though the site itself has been used as place of worship since 678 AD. After the Norman Conquest in 1066, King William I brought in Serlo, a monk from Mont St. Michel in Normandy to be the Abbot of the Abbey of St. Peter’s, as it was known then. If you’ve ever visited Mont St. Michel, you’ll appreciate how much those monks knew about building cathedrals under trying circumstances, and Serlo apparently knew how to get things done. A brief aside: Mont St. Michel is located on the peak of an island off the coast of Brittany, accessible by causeway at low tide. The tide in Brittany goes out for miles, and in the colder months the coast is windswept, desolate and freezingly cold. I’ve visited Mont St. Michel twice, and took lots of pictures, but still have to write that one up. It took a couple of days for my hand to thaw and resume its normal shape after clutching the camera for hours in frigid conditions.)

The Abbey of St. Peter’s had significant royal associations. Henry III was crowned here in 1216 and Edward II was buried here in 1327, having died under suspicious and gruesome circumstances at nearby Berkeley Castle. 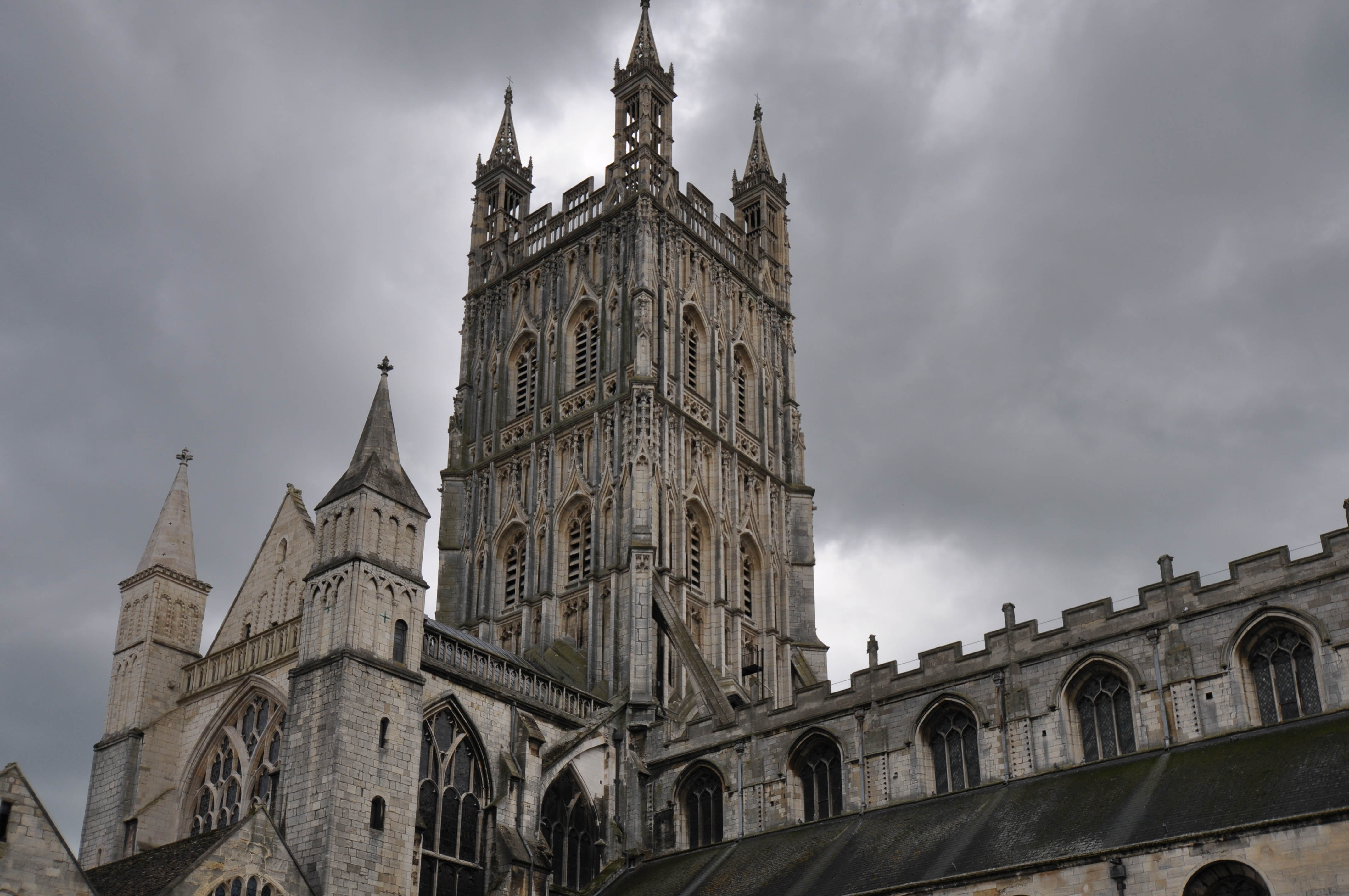 Work continued for many years, and the Lady Chapel and New Tower were completed in the 13th century. 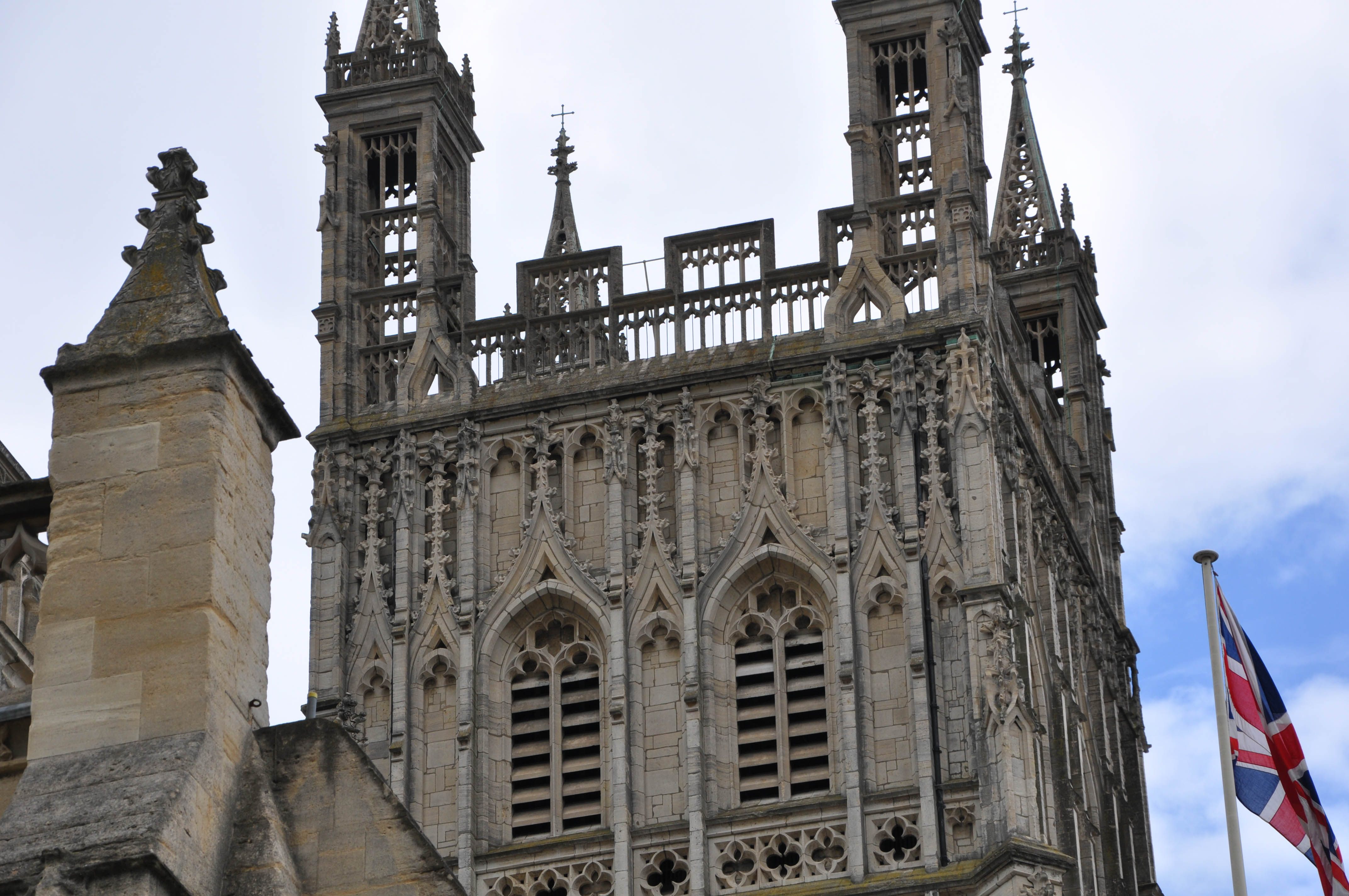 The tower you see here was completed in the 15th century, just in time for Henry VIII to order Dissolution of the Monasteries. The buildings became Gloucester Cathedral, and the seat of the Bishop of Gloucester. Other gruesome tidbits of its history include Bishop Hooper being burned at the stake here in 1555 on the orders of Henry’s second successor, his eldest daughter, Catholic Queen Mary. That family seemed to go in for a lot of violence! Oliver Cromwell tried unsuccessfully to have the cathedral demolished during the Commonwealth period, as was his wont. With the restoration of the monarchy in 1660, the Cathedral entered a period of relative peace and calm.

A great deal of the stained glass in the Cathedral is Victorian, much of the Medieval glass having been lost during earlier turbulent times.

The Lady Chapel was one of the last pieces of the Cathedral to be built in the medieval period, and it retains a lot of stained glass from that time, a panel of which is shown below. 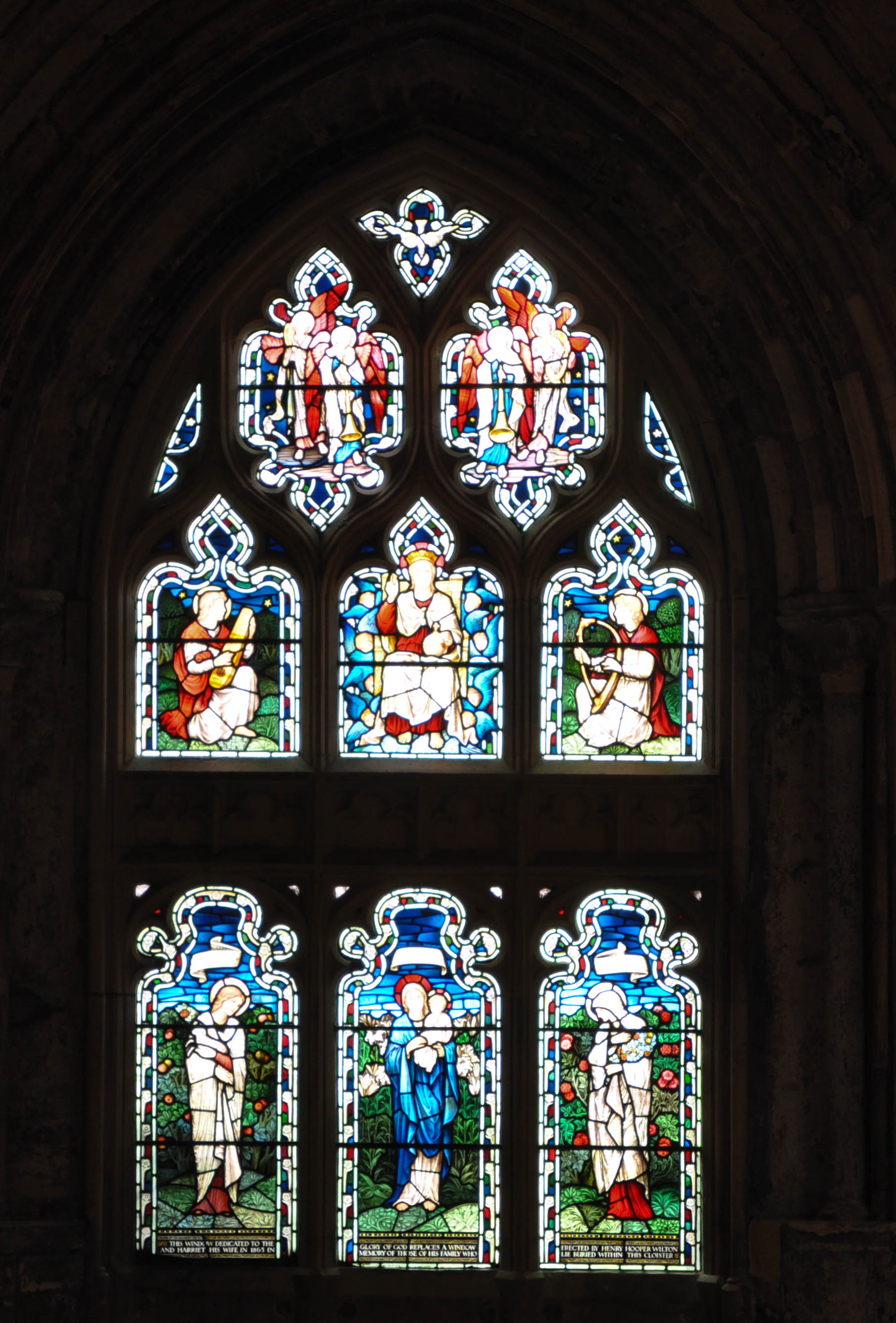 Here is a view through the choir towards the altar, just under the eastern windows, which are unfortunately washed out in the light. 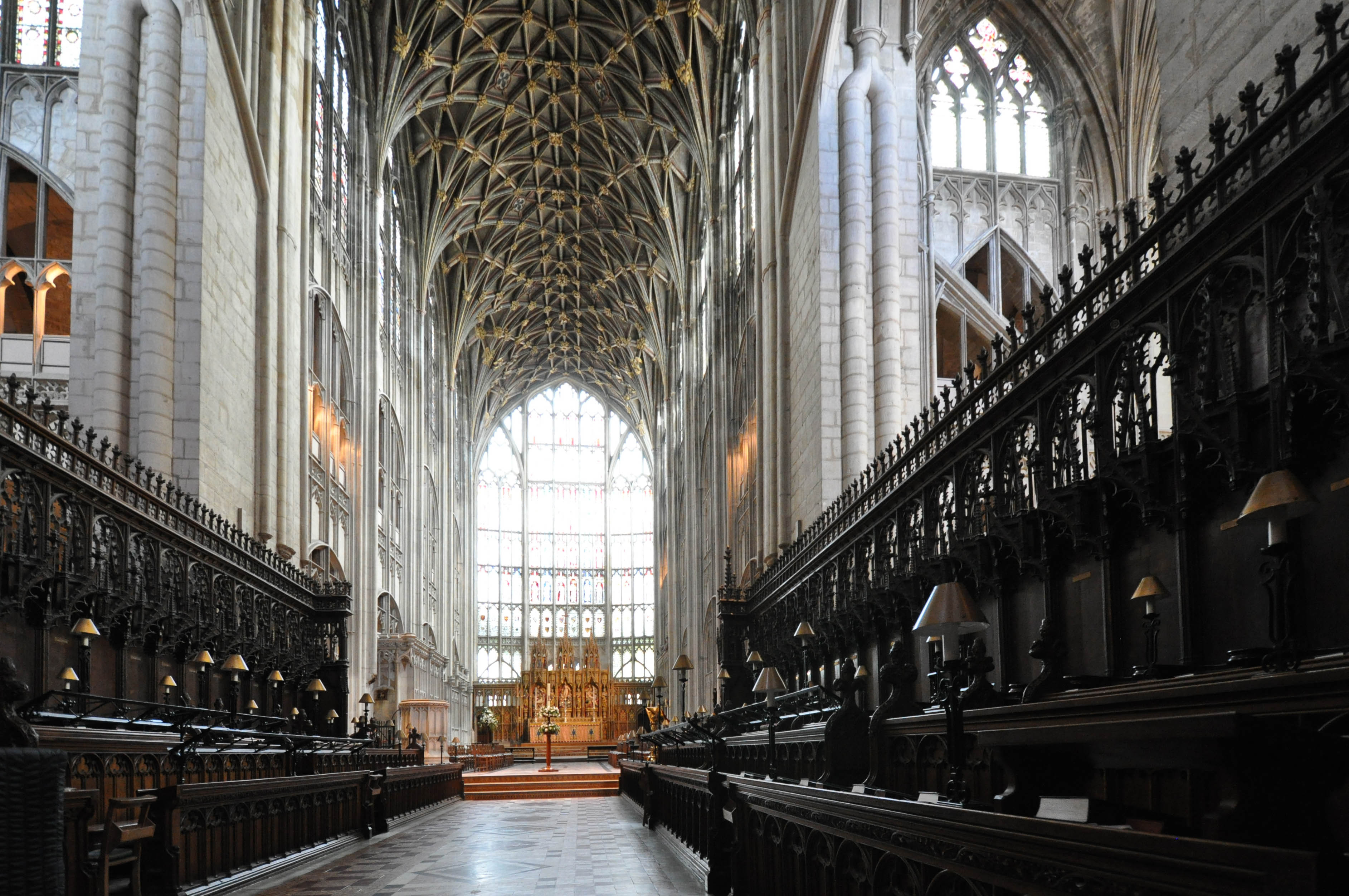 And a close up of the altar itself.

I find photographing in Cathedrals to be a bit of a challenge, often dealing with low interior light, wandering tourists getting into the shots, and my general reluctance to be too intrusive in a place of worship. 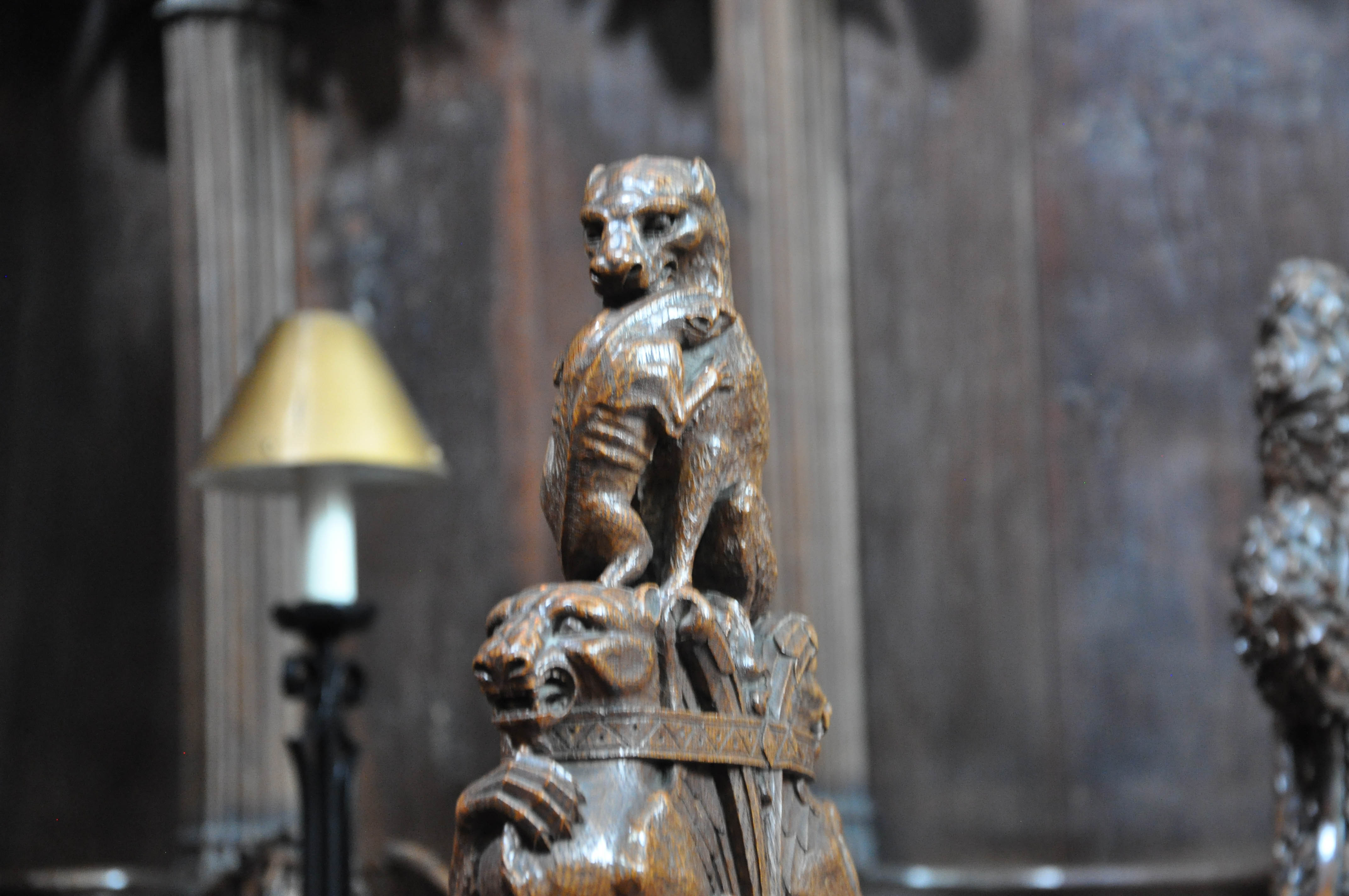 So I bob and weave, trying to line up shots quickly, which doesn’t always produce the highest quality photos as this close-up of one of the carved figures in the quire attests. But you get the idea!

This is the choir (or quire) where the clergy or choir sat. It’s located just to the west of the chancery, between the nave and the sanctuary, which houses the altar and Church tabernacle.

Here is a view looking towards the choir and the altar, so from the very back of the cathedral, where the entrance door is situated. I learned that churches are usually built on an east/west axis with the altar being located at the eastern-most part and the great entrance doors in the west.

Edward II’s tomb (the king who was gruesomely done in at Berkeley Castle, according to legend).

There are many others tombs, some of them with quite detailed carving, such as the ruff on the lady. Can you imagine wearing something like that? How uncomfortable it would be! 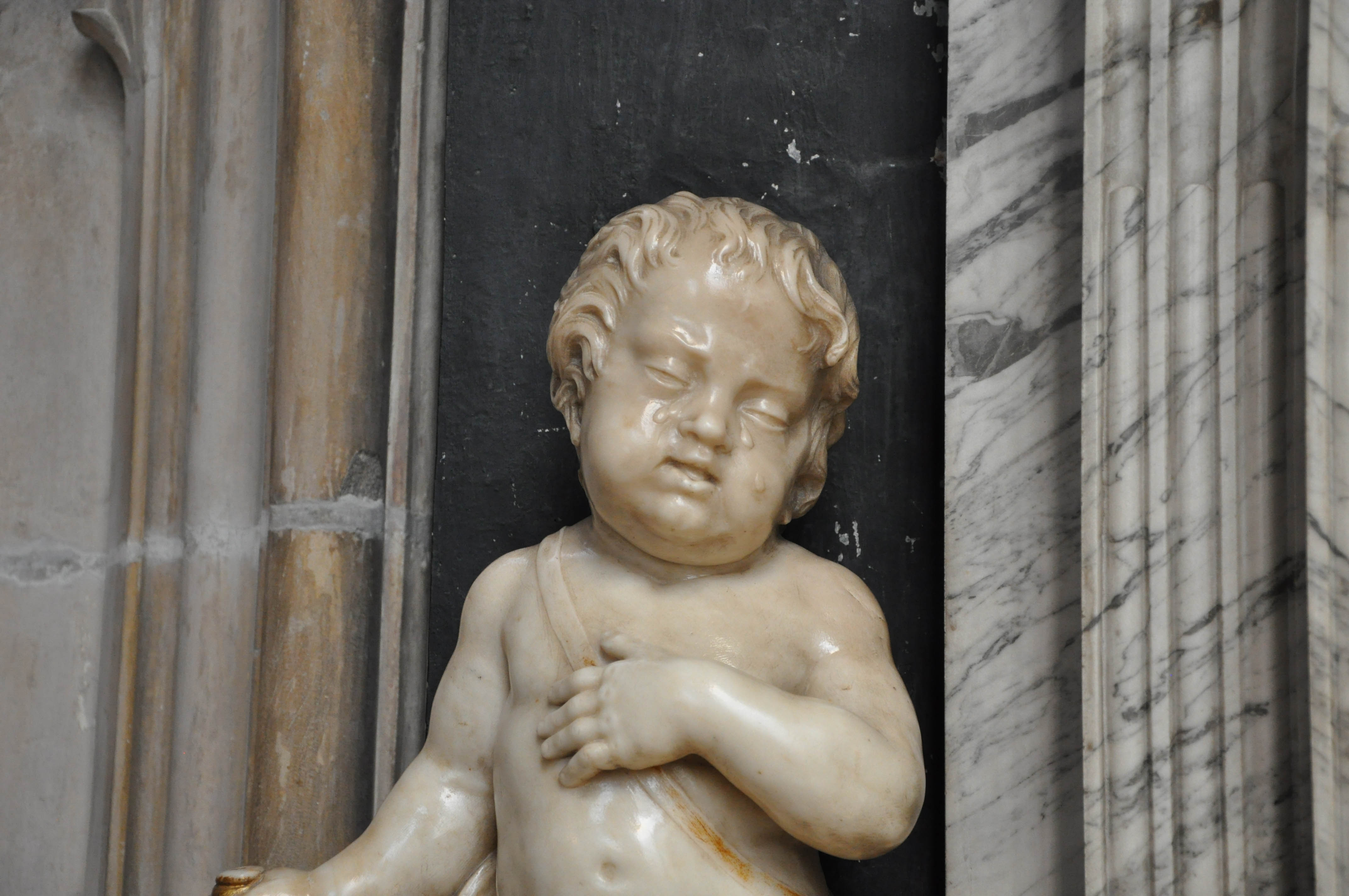 And the tears on the face of the cherub… 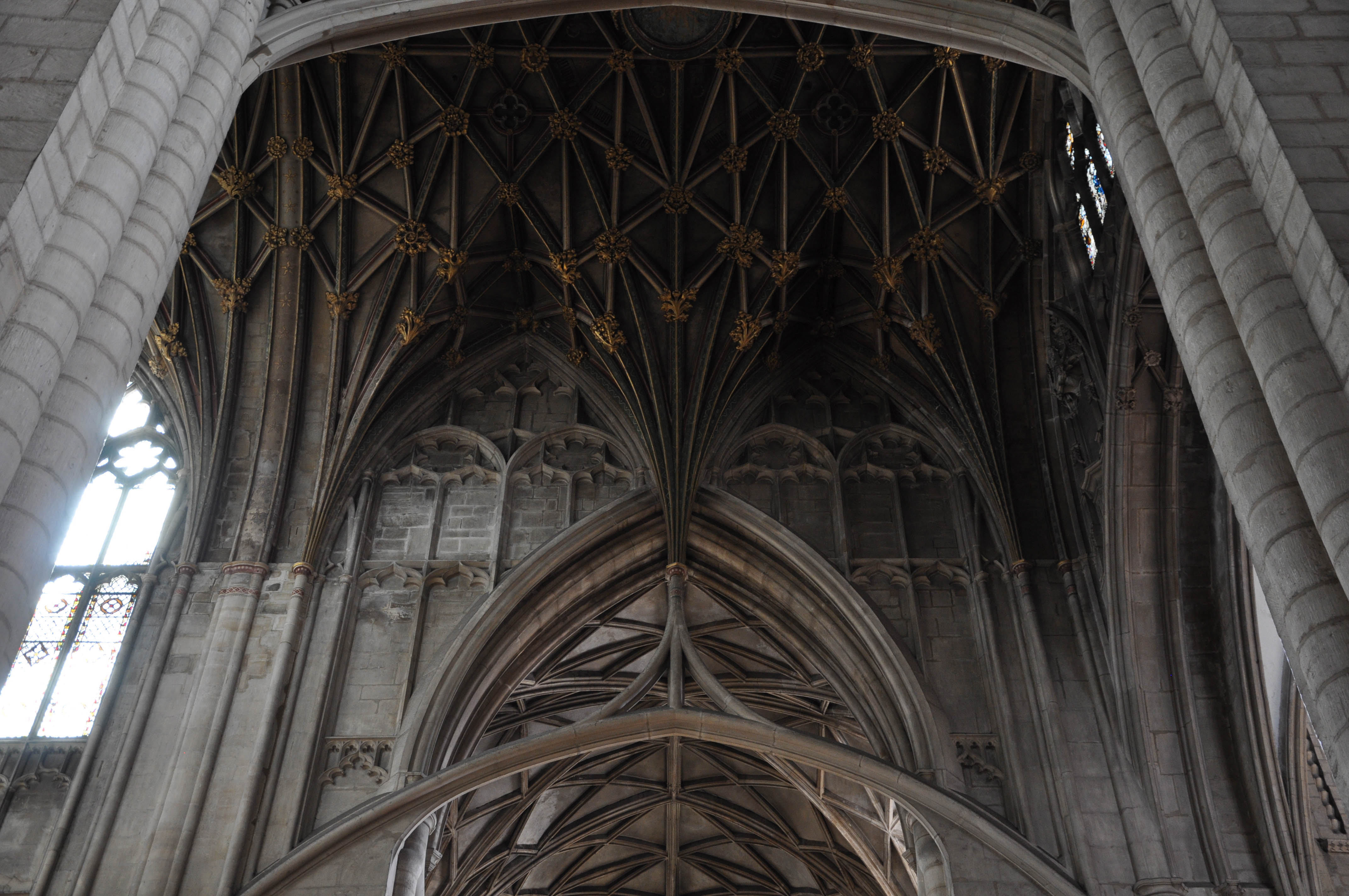 The fan vaulted ceilings in the nave are gilded.

Back outside, the day had become much sunnier and warmer. The weather in England is very unpredictable, so you take your pictures when you can, never knowing when you’re going to be facing a downpour. 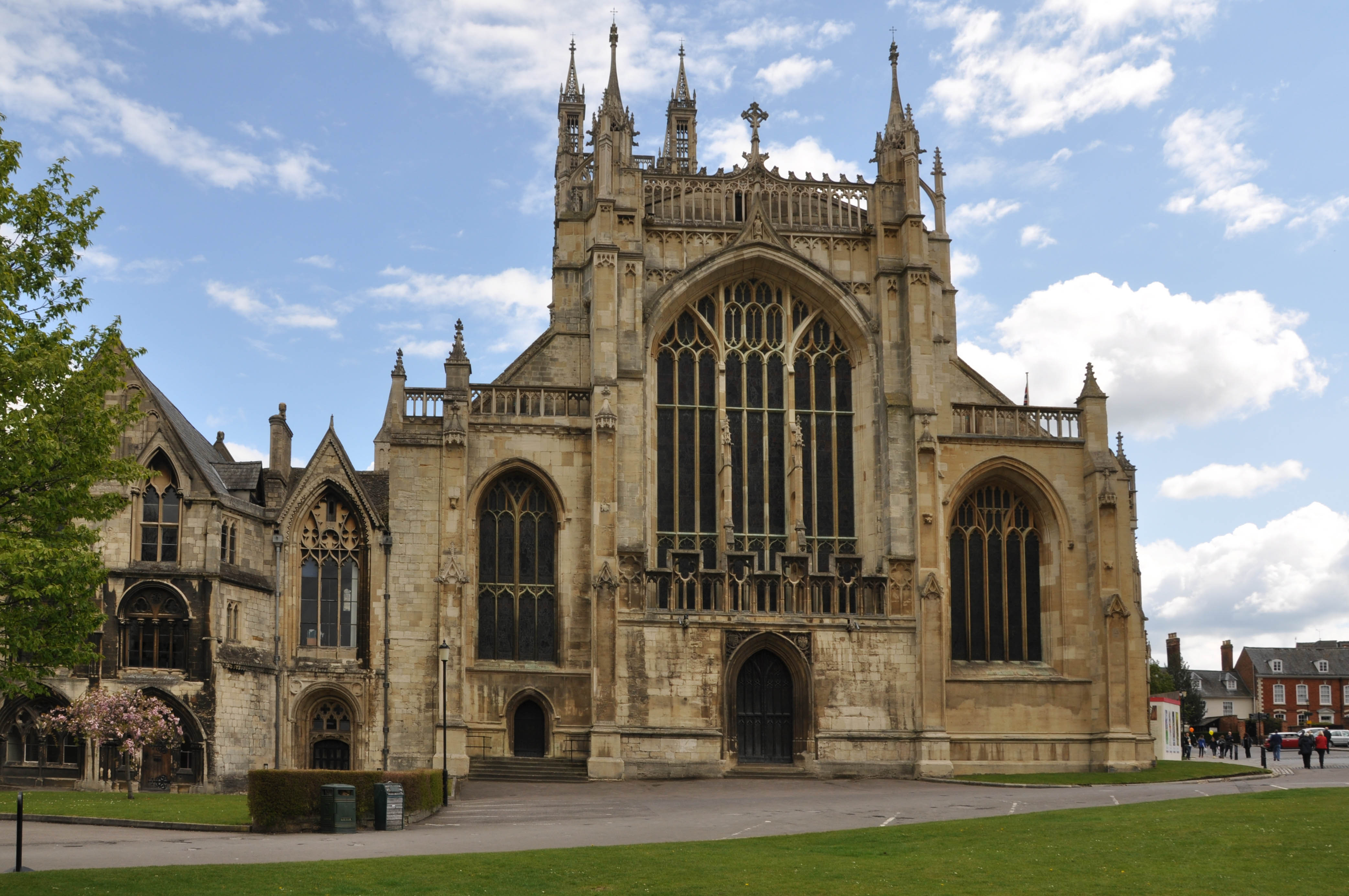 Of course, I had to meet the Cathedral Cat.  He was not as friendly as Louis from Wells Cathedral.  Quite standoffish, in fact, refusing to even look at us!

I will leave you with a shot of where we began – The Cloisters.

I hope you have enjoyed the tour! 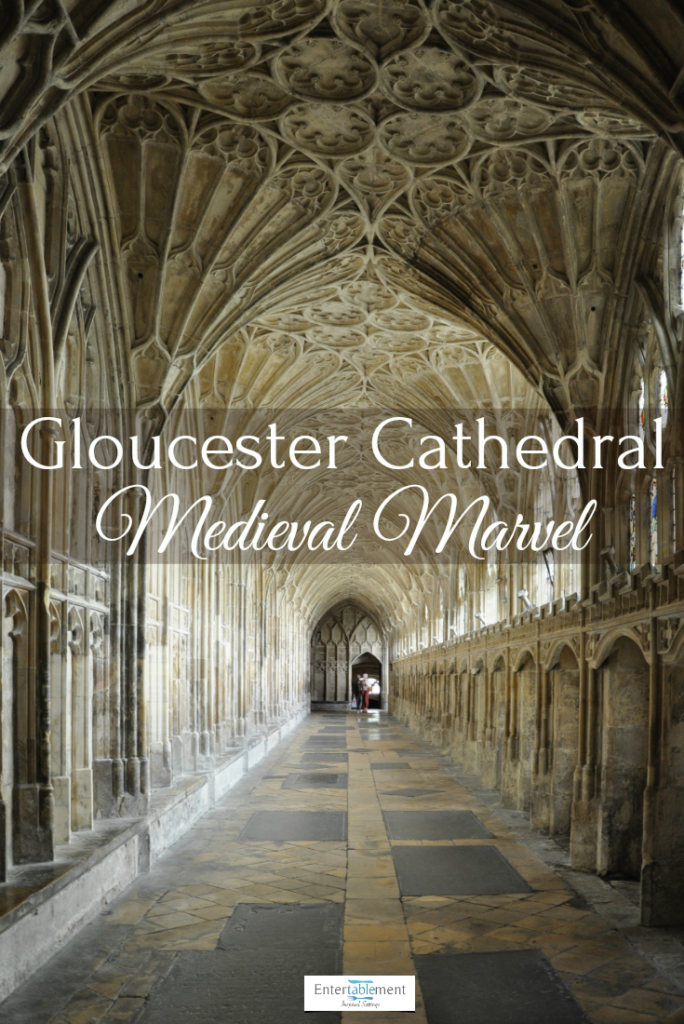