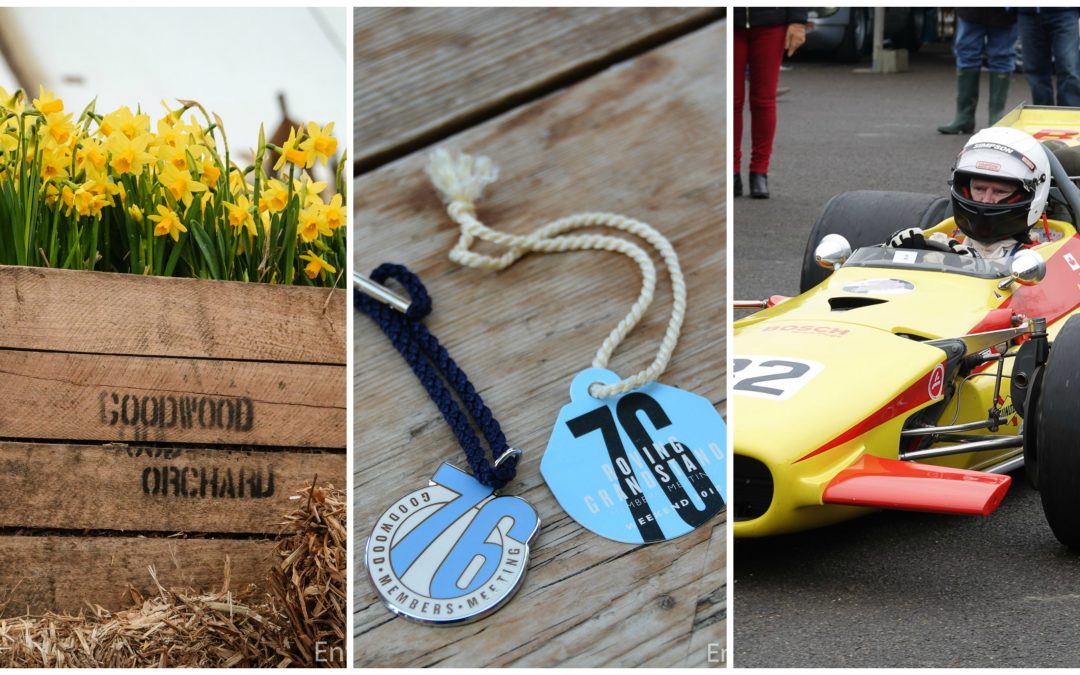 We’ve been in England for about a week now and spent our few first days in London getting recombobulated before heading to Chichester to attend the 76th Goodwood Members’ Meeting. 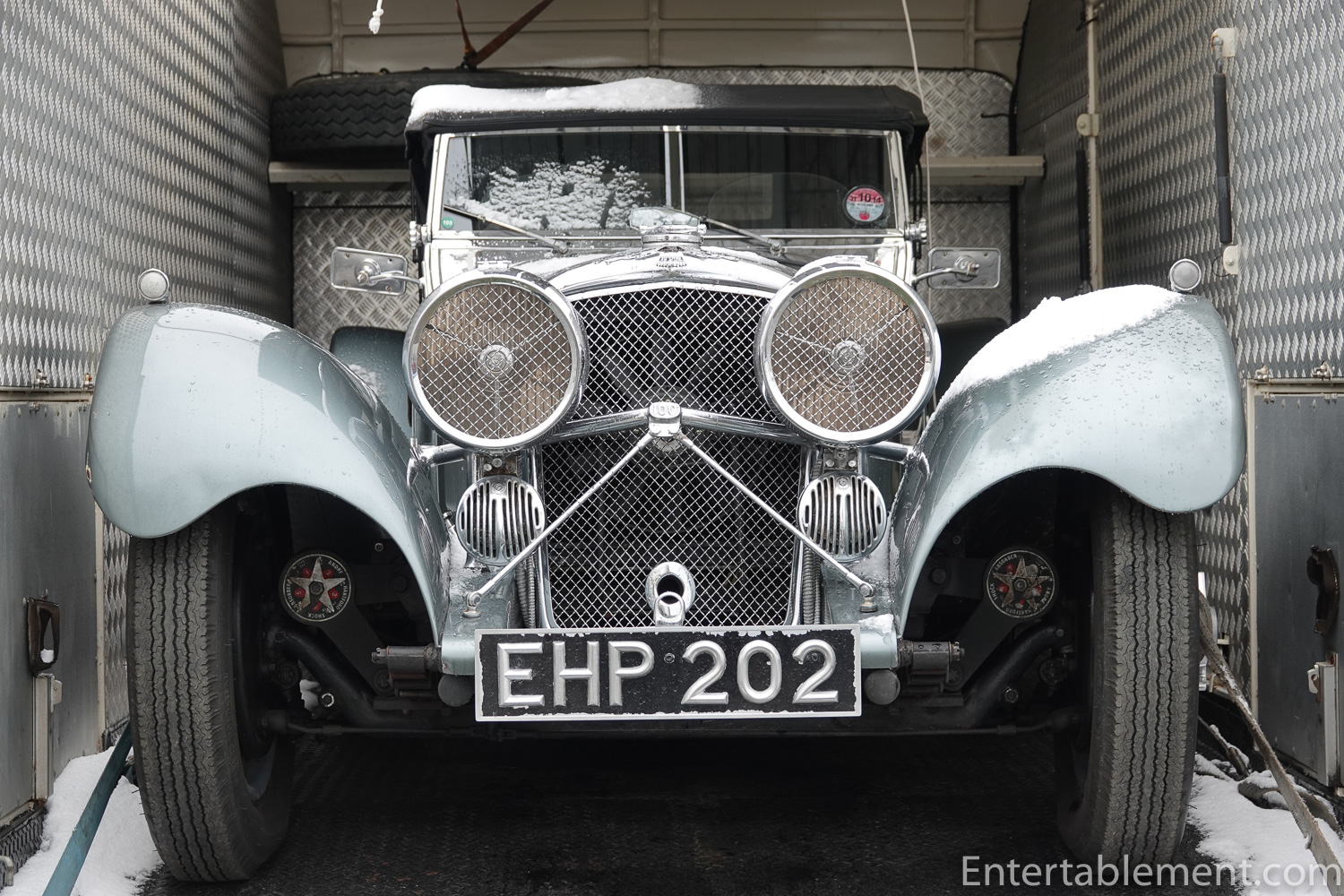 My husband, Glenn, as some of you may know, is a car guy, and his particular enthusiasm is vintage racing. Thus, once or twice a year we find ourselves at Goodwood,  where one of the first and most fashionable hunts was held in the 1690s, and where golf, cricket, horse racing, motor racing and flying continue to be celebrated today. 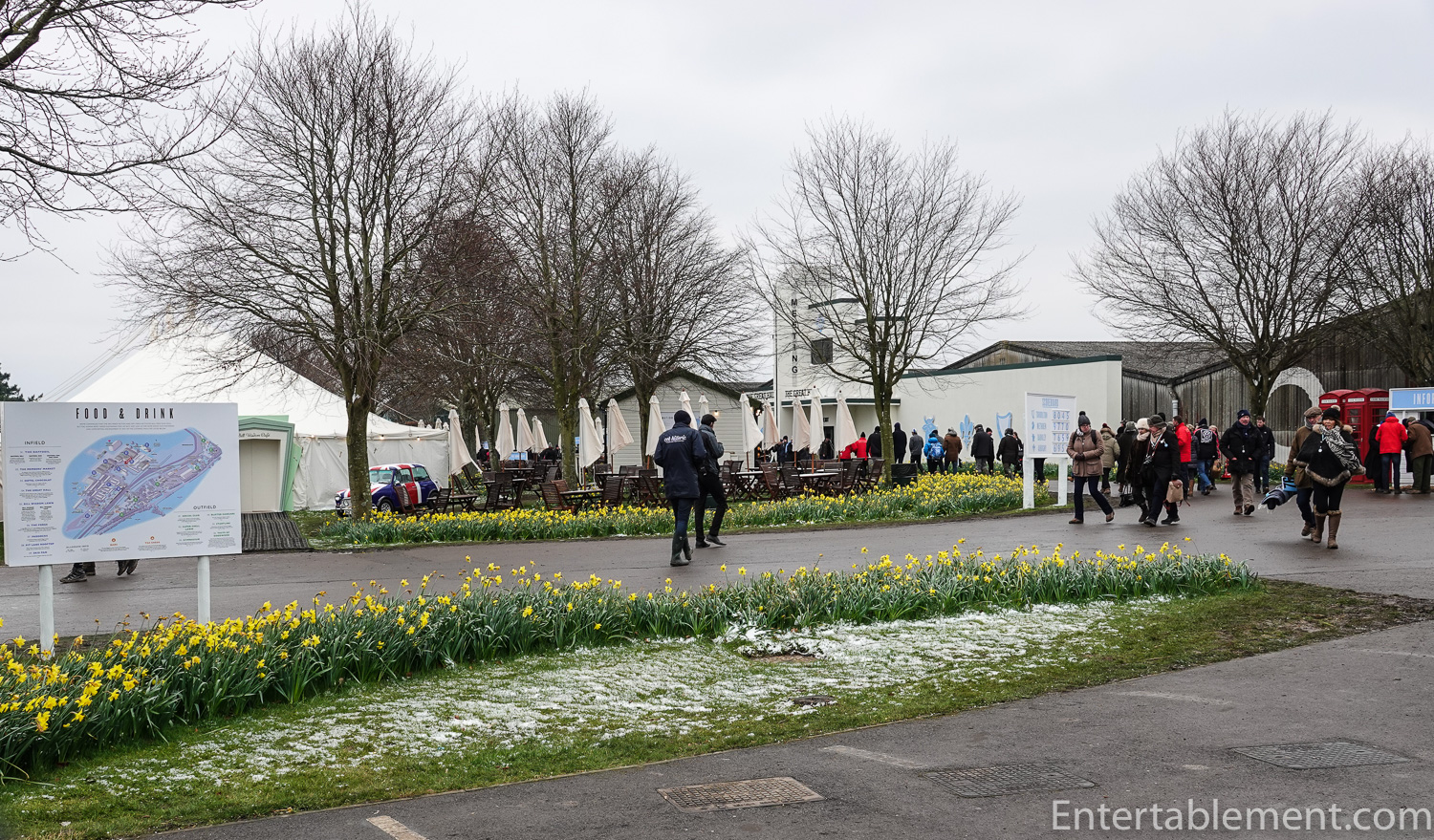 The Members’ Meeting is held in March, and usually one looks forward to spring-like temperatures and gorgeous daffodils, for which the estate is renowned. Daffodils we had in abundance, and they were spectacular. The weather, however, was less than salubrious. England has been hit with several “Beasts from the East” and this weekend was most unfortunately smack in the middle of one. 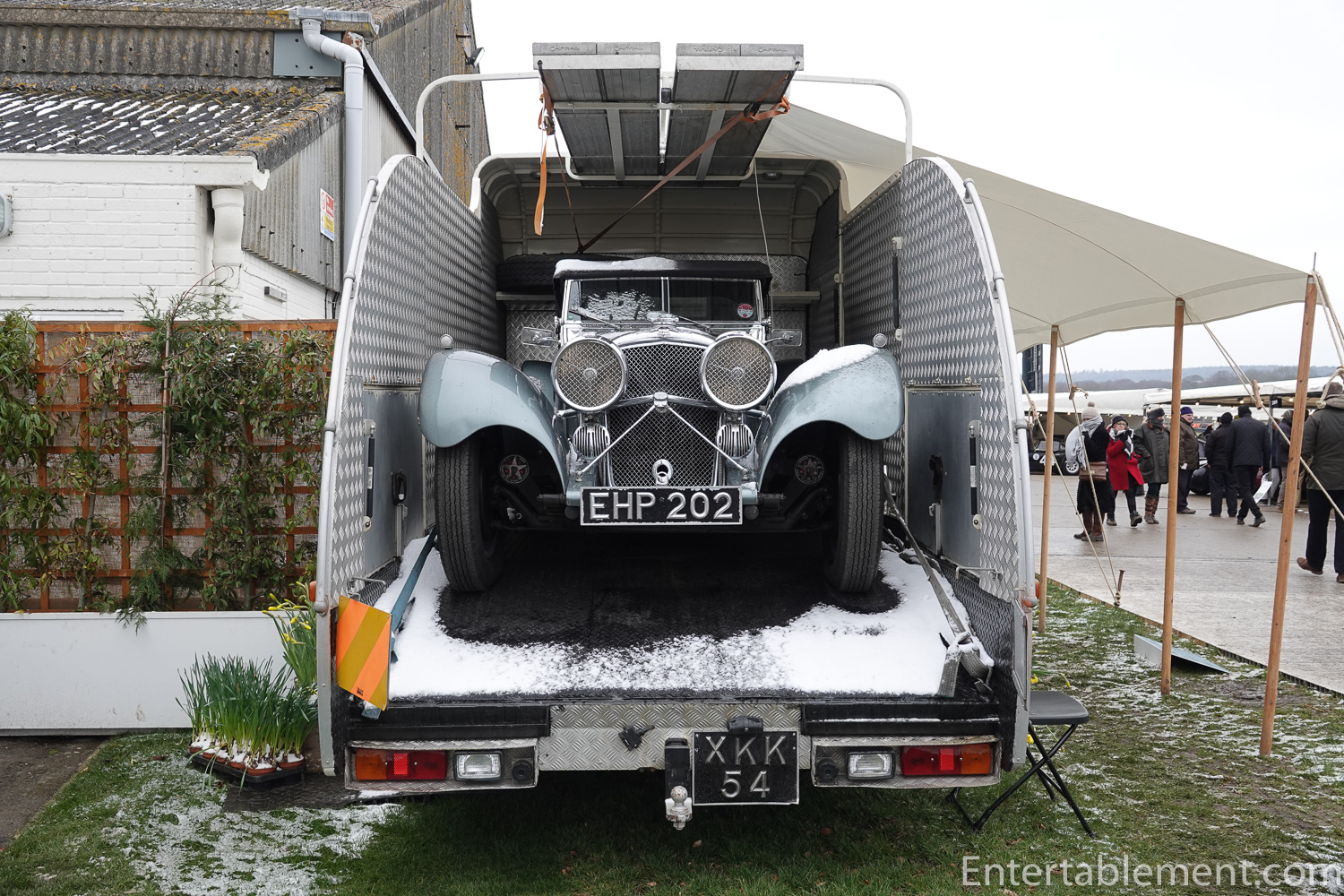 Snow!!! Frigid temperatures and gusty winds buffeted contestants and spectators alike. It didn’t dampen the enthusiasm, however. People bundled up as best they could, adding caps, scarves and layers of clothing and blankets. 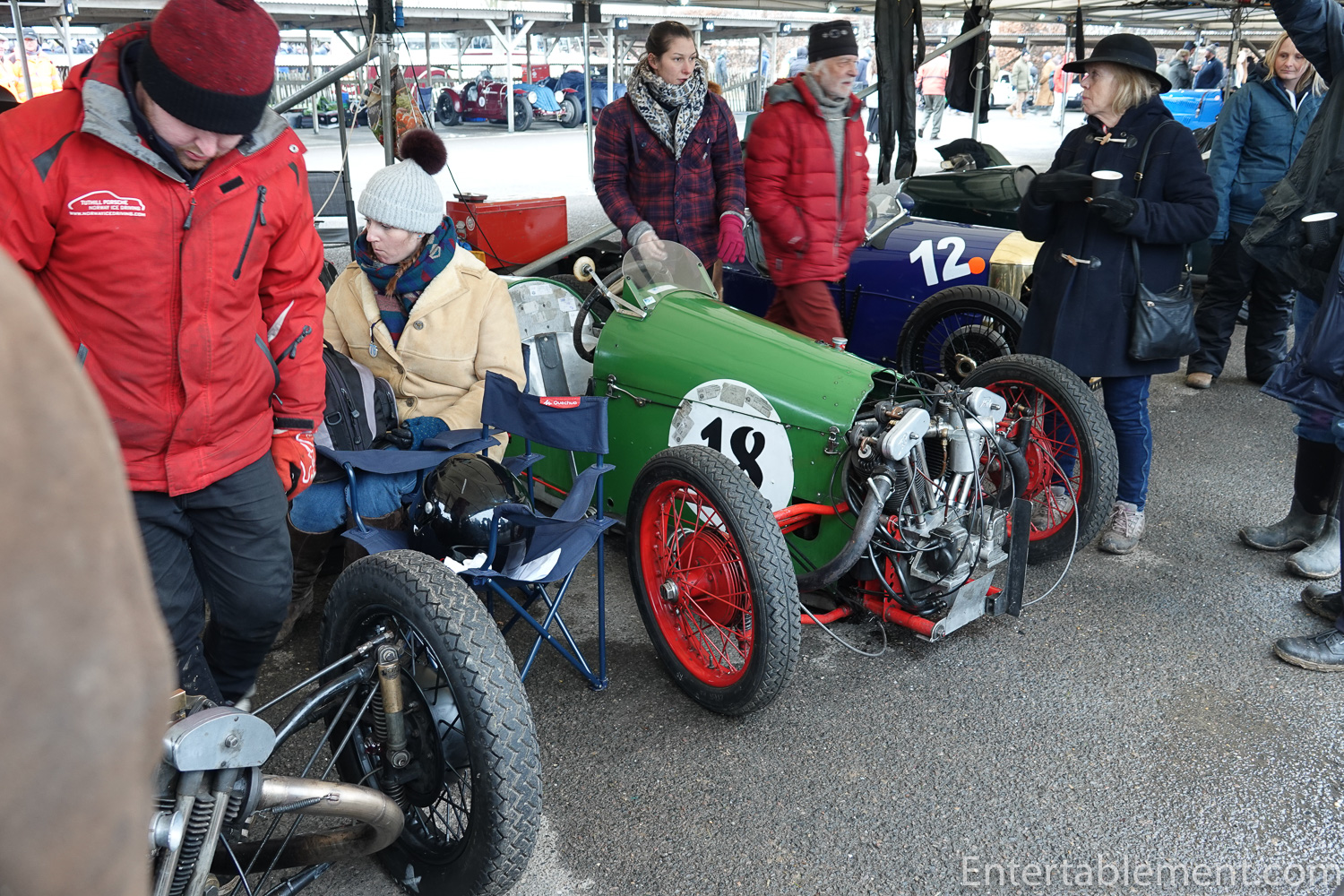 I took frequent refuge in the Daffodil Tent, which had been set up with “benches” of straw bales. 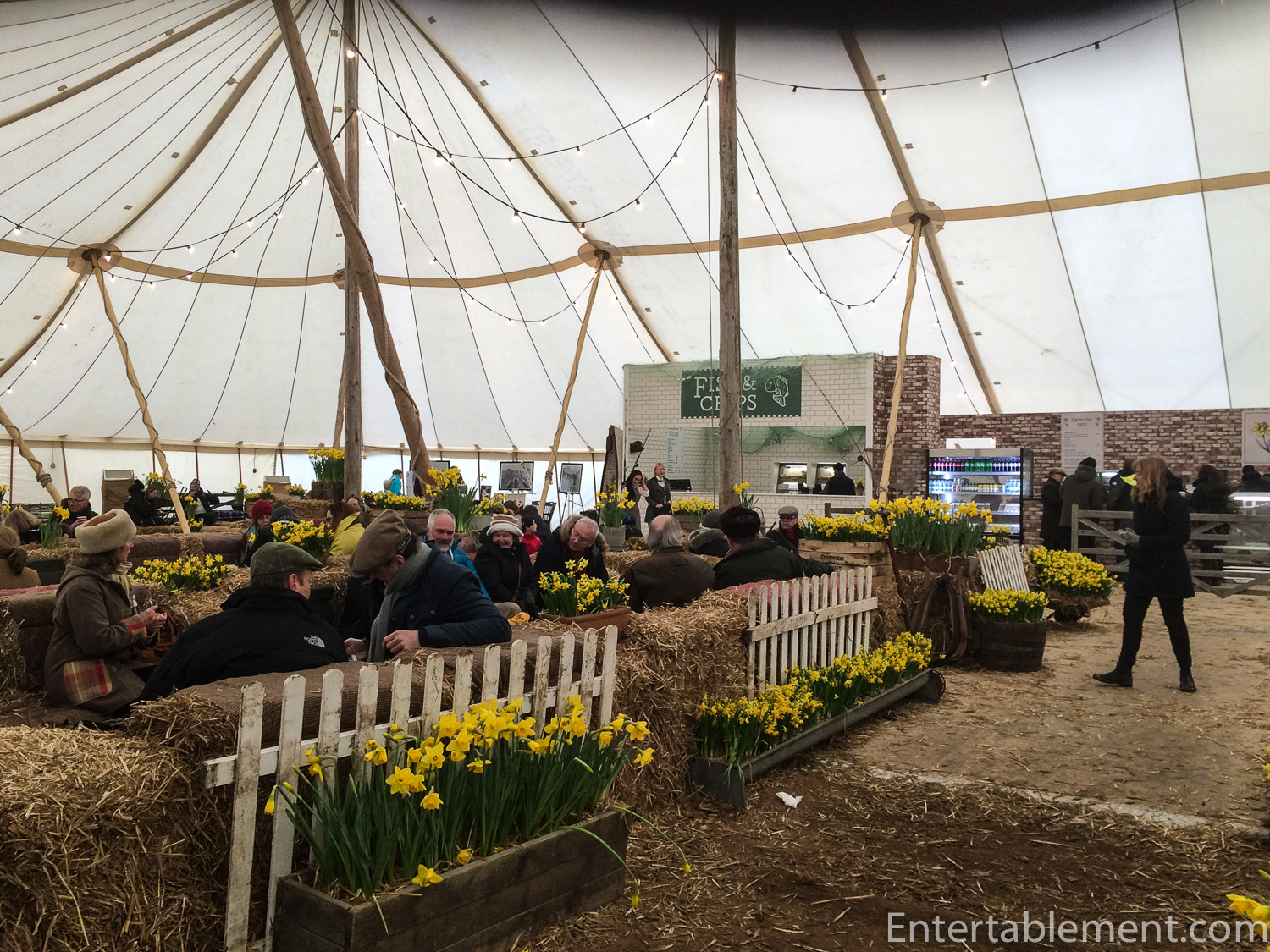 The organizers had arranged for refreshments to be served all day, and they did a land-office business in hot coffee. Beer, not so much! It was too cold! 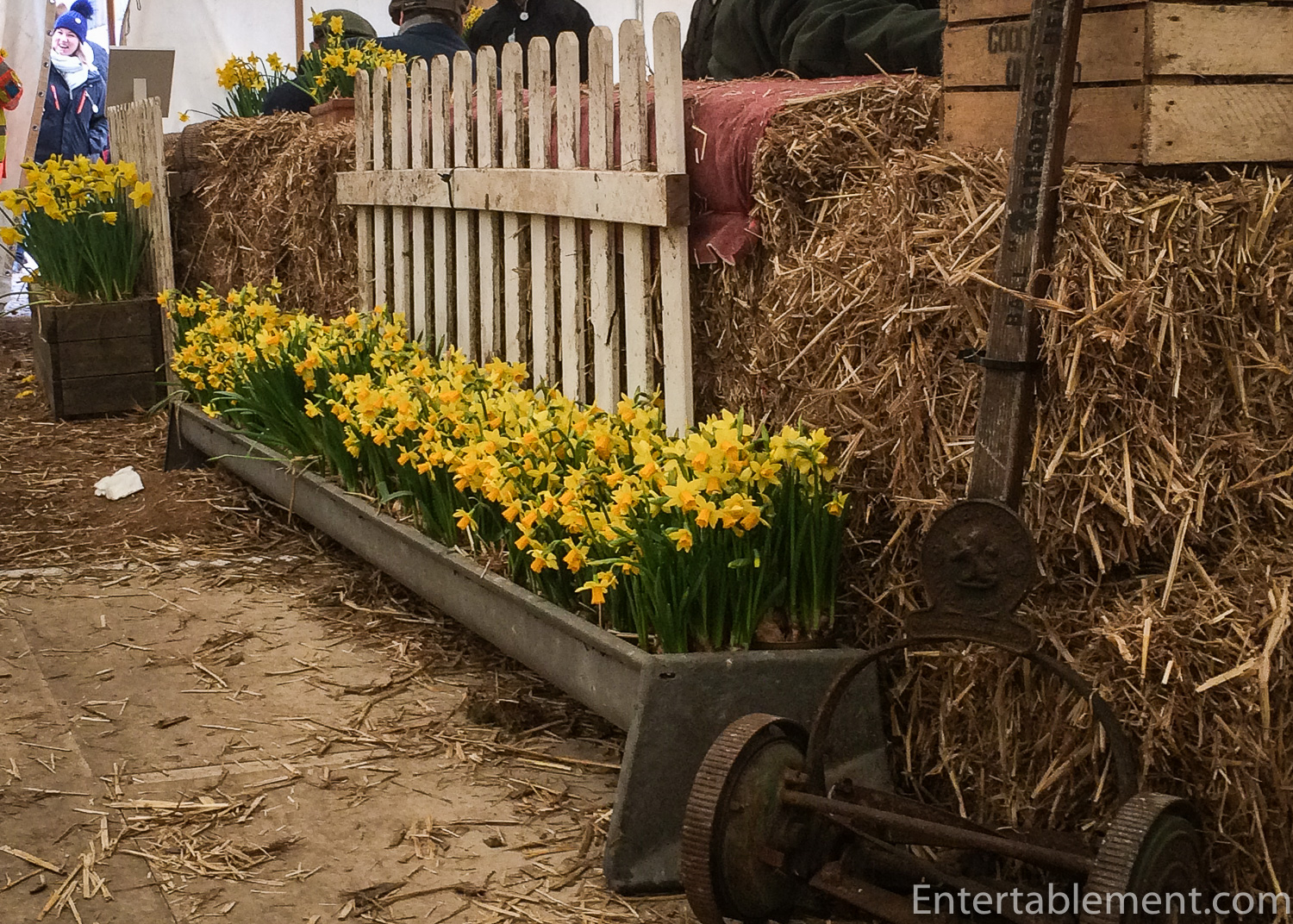 The two days of racing included demonstrations, practice sessions and twelve races. I emerged from my snug swaddling in the Daffodil Tent to watch my favourite driver, David Coulthard, compete in a 1955 Mercedes Benz 300 SL Gullwing. 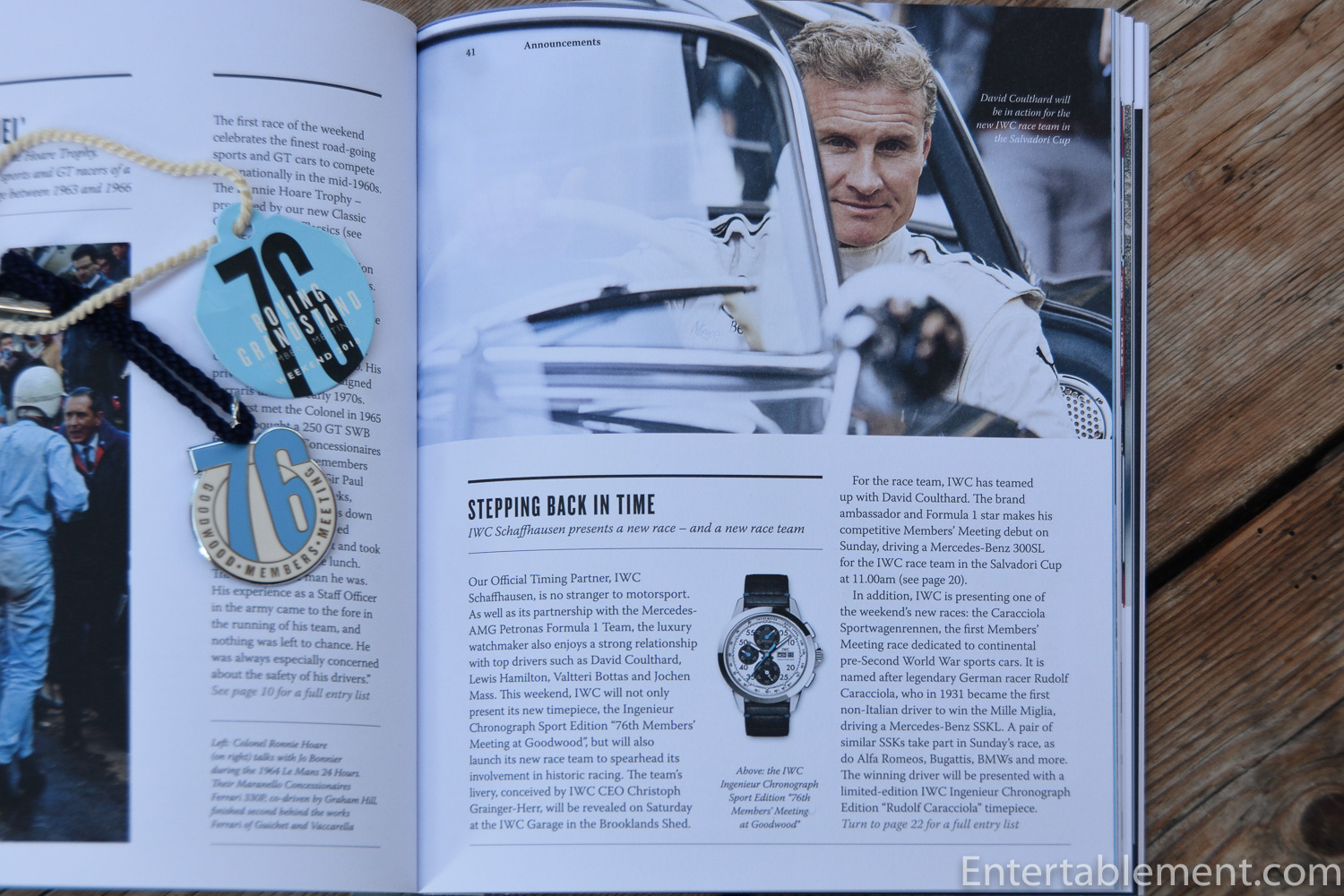 Gorgeous car, and exciting race. The snow made for tricky conditions and drivers were all over the place. 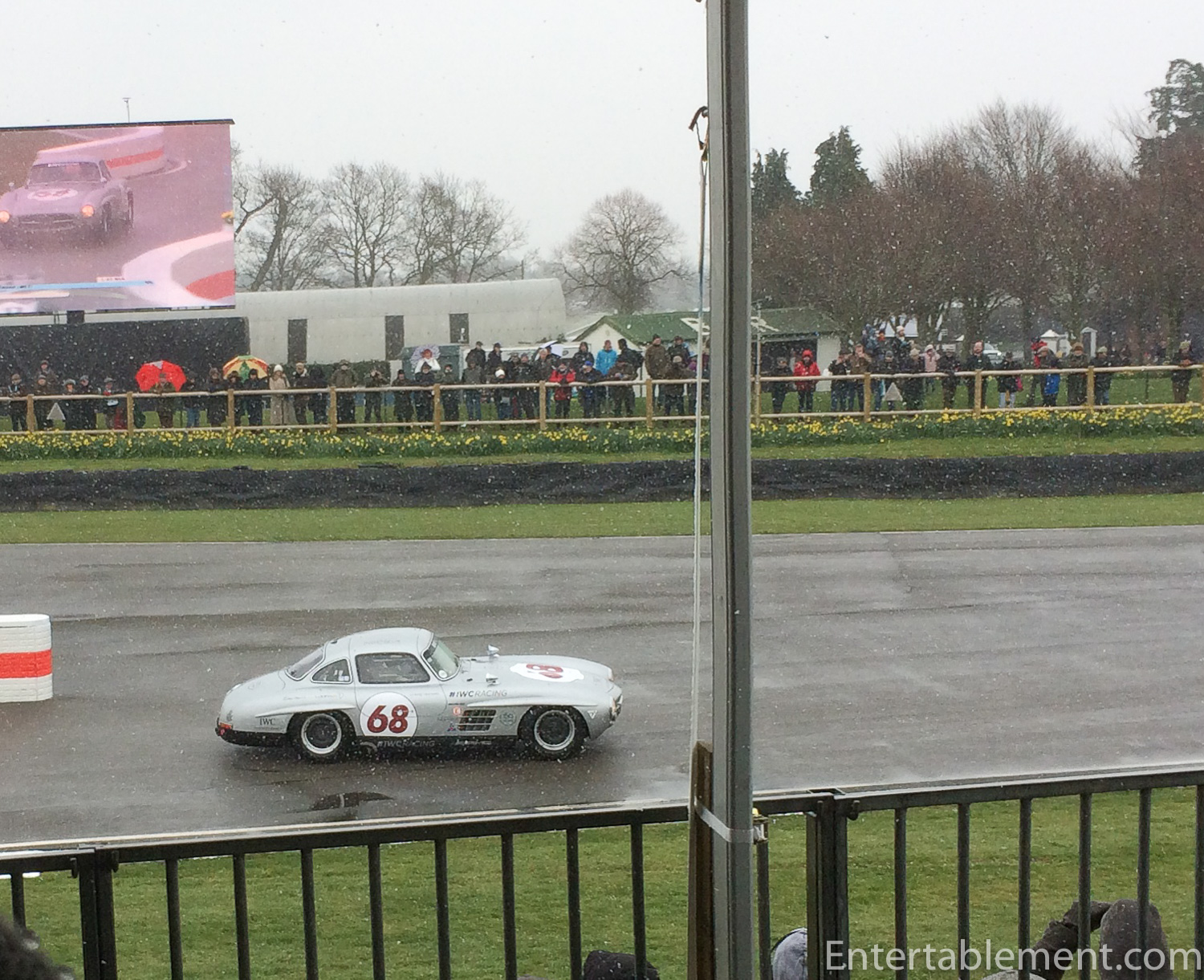 Race #6 was The Salvatori Cup, a 20 minute race for “World Championship Sports Racing Cars of a type that raced between 1955 and 1960″. Absolutely stunning cars, and I always get a kick out of names like the Jaguar ‘Knobbly”, the Maserati “Birdcage” and the Cooper-Climax “Bobtail”. 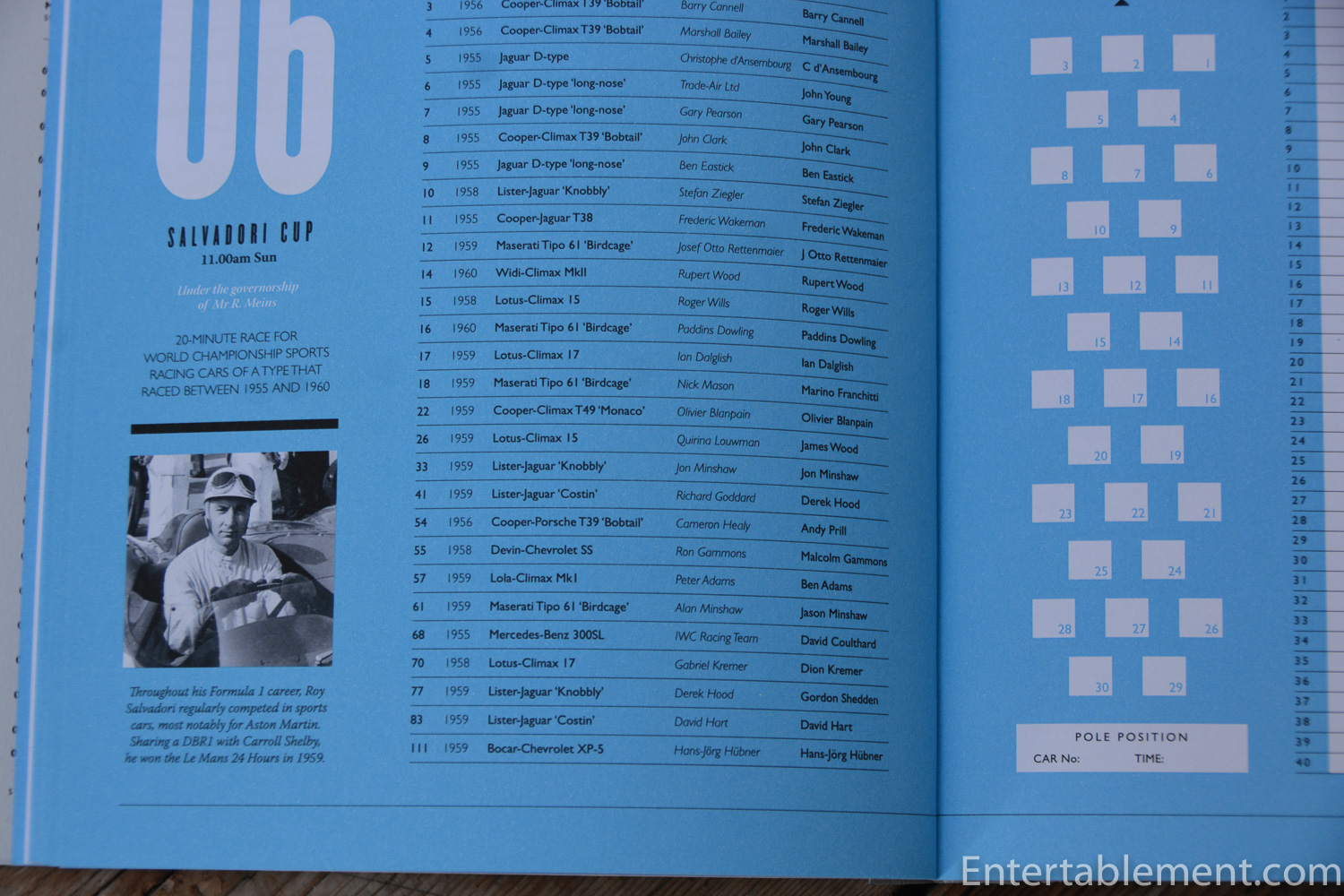 David Coulthard drove as a member of the IWC team; he has always been one of my favourite Formula 1 drivers, well known for being an excellent brand ambassador and a real gentleman.

Unfortunately, he didn’t win the race, but spun off onto the grass. The conditions were very challenging; everyone was on their best behaviour, though, and no one was hurt. 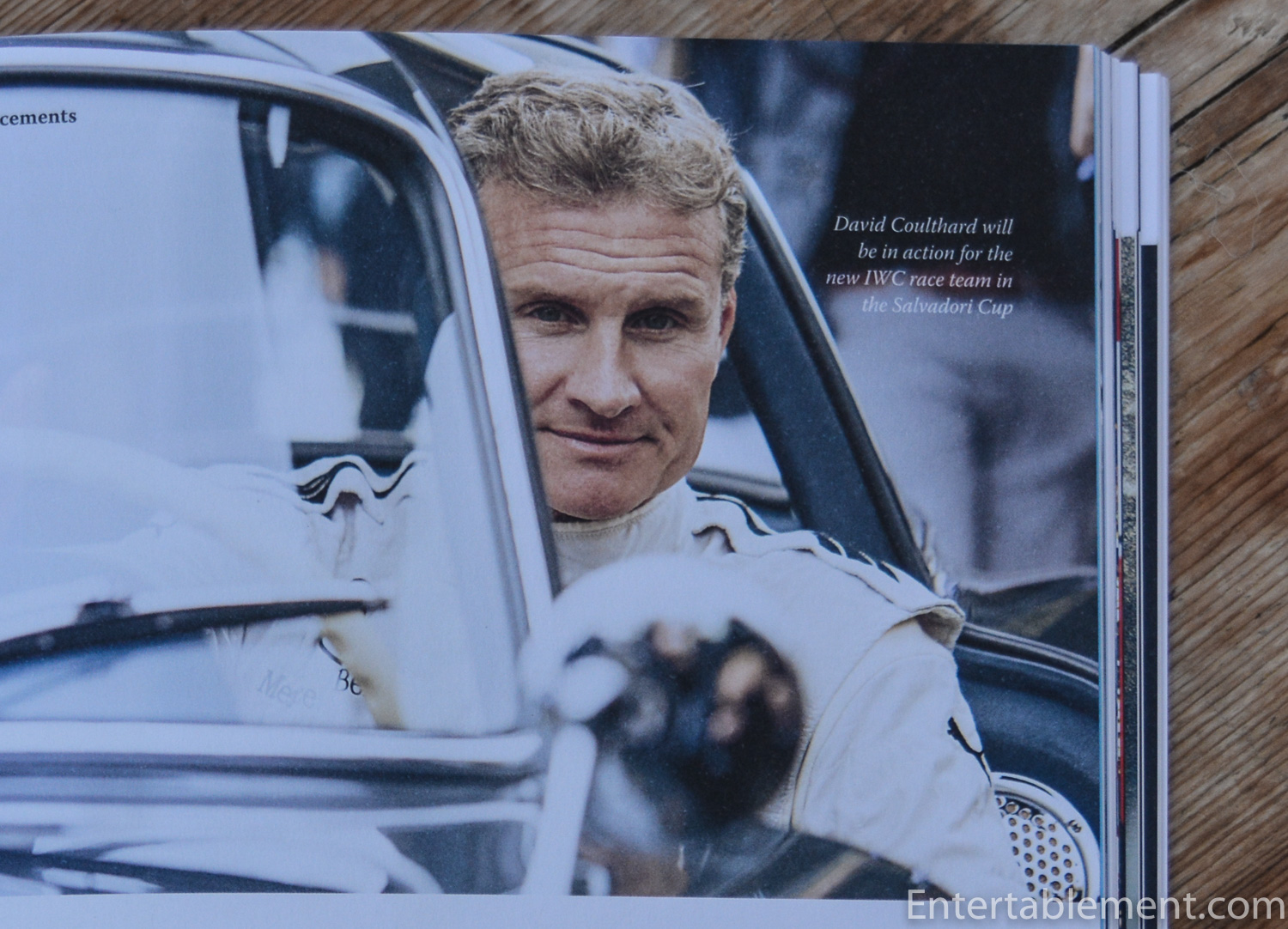 Then it was back to the Daffodil tent for me. Glenn braved the elements much longer than I did, coming back between races to warm up, then to wander around the paddocks to see the cars, their teams and drivers up close and personal. 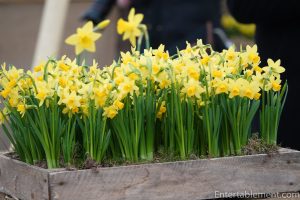 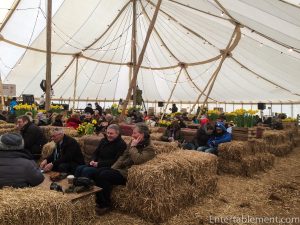 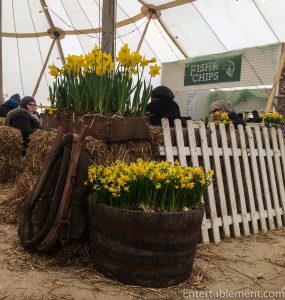 The  pre and post war modified sports cars compete as vigorously and enthusiastically as modern day counterparts. It’s utterly enthralling to see the drivers whip around in quite extraordinary vehicles. 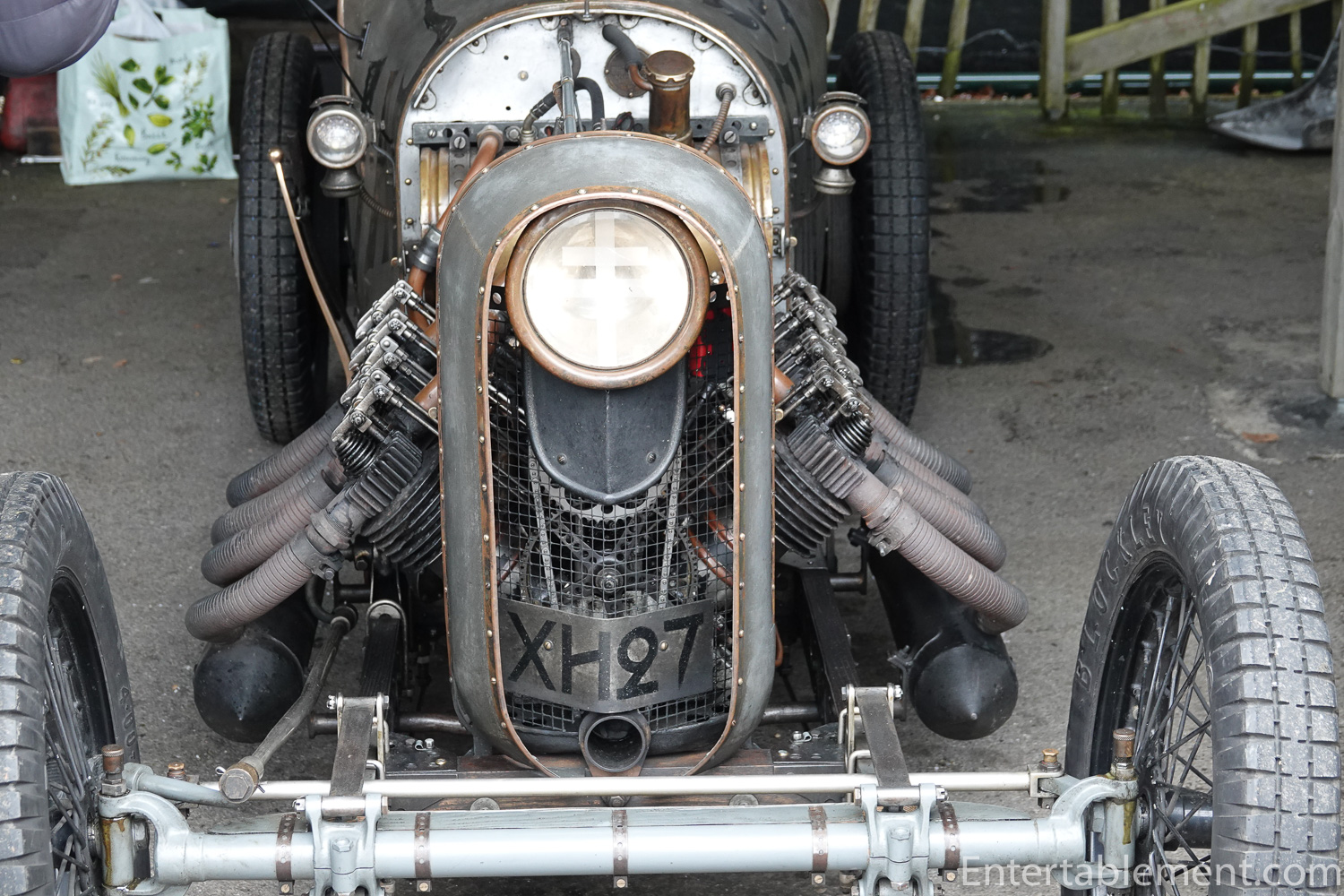 Would you hurtle around a track in that thing? 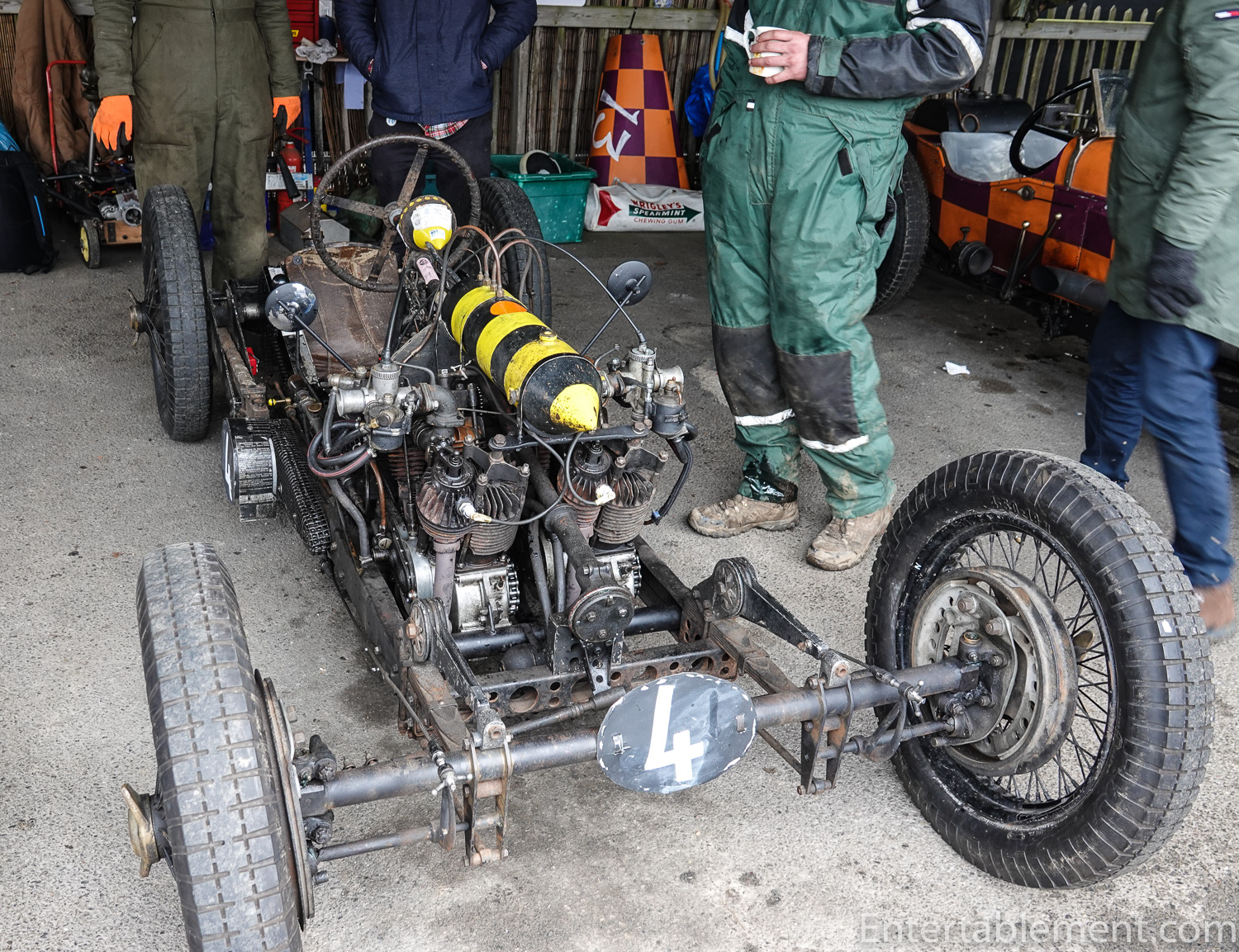 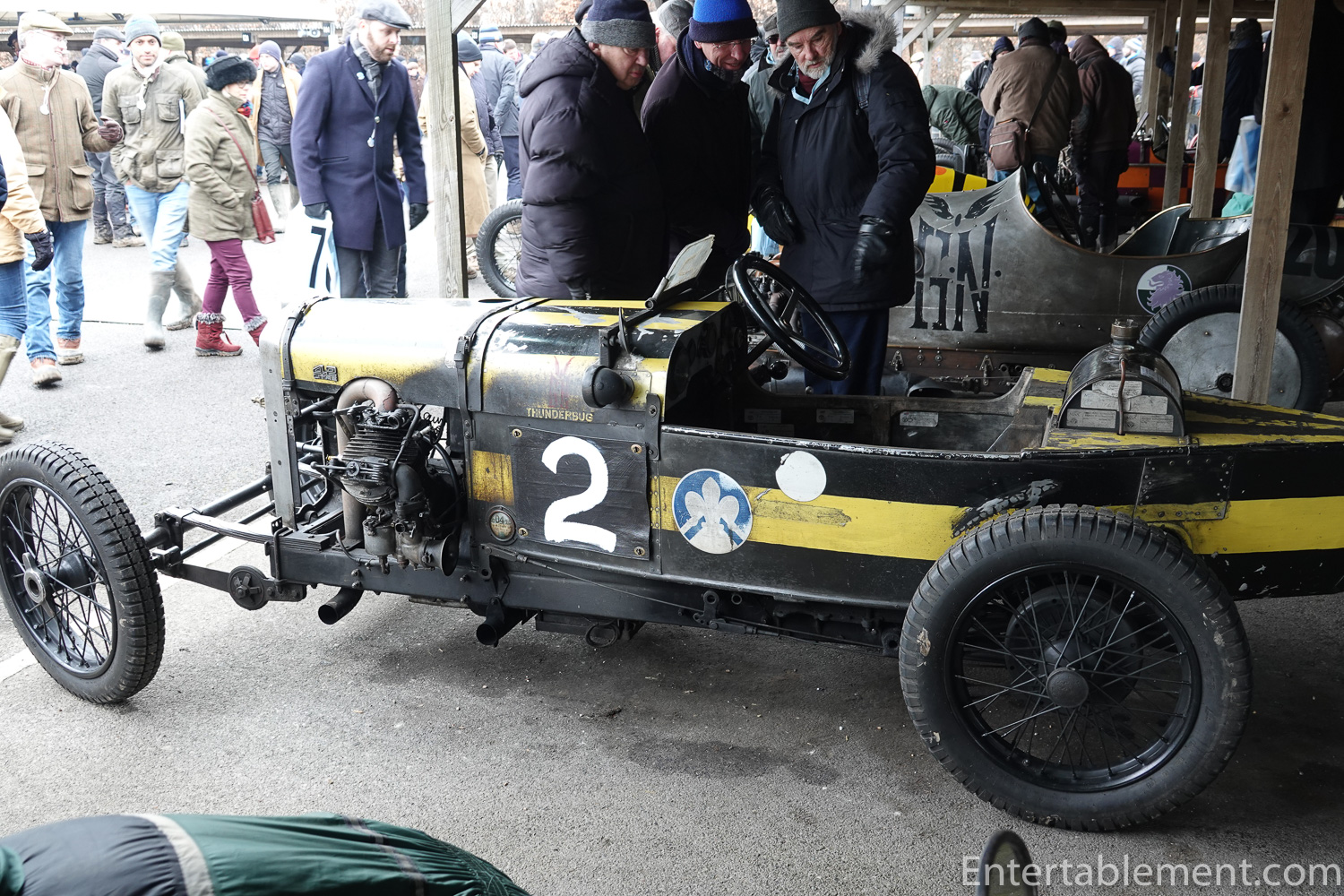 It’s an amazing event, allowing close proximity to the action. It’s so much fun to see the drivers setting out or coming back in after their races. 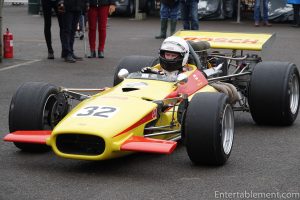 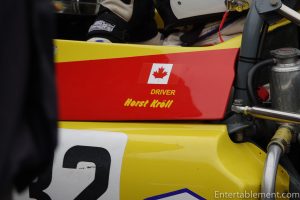 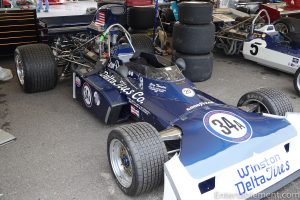 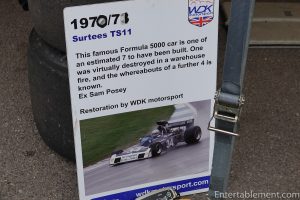 The Revival is Goodwood’s biggest event of the year and it’s held in September. At that event, most people are dressed in vintage apparel or are in uniform. Glenn and I dressed up for the 2017 Revival, me in a dress from the 1940s an Glenn in his trilby, which we call his “Foyle” hat. Even in September it can be cold, though; I’m holding my trusty Goodwood blanket behind my purse. It’s fleece on one side and a waterproof material on the other.

It got pressed into service once more at The Members’ Meeting, let me tell you. Yes, we’re from Canada and do have suitable clothing, but we didn’t bring it with us. (Not the brightest move…but there is only so much room in one’s suitcase…) My parka and furry boots are in the front hall cupboard at home. I made do with jeans, several layers of sweaters, all topped with a Barbour jacket complete with liner. I did have a hat and gloves, fortunately. Between events, I  snuggled in to watch the live entertainment. 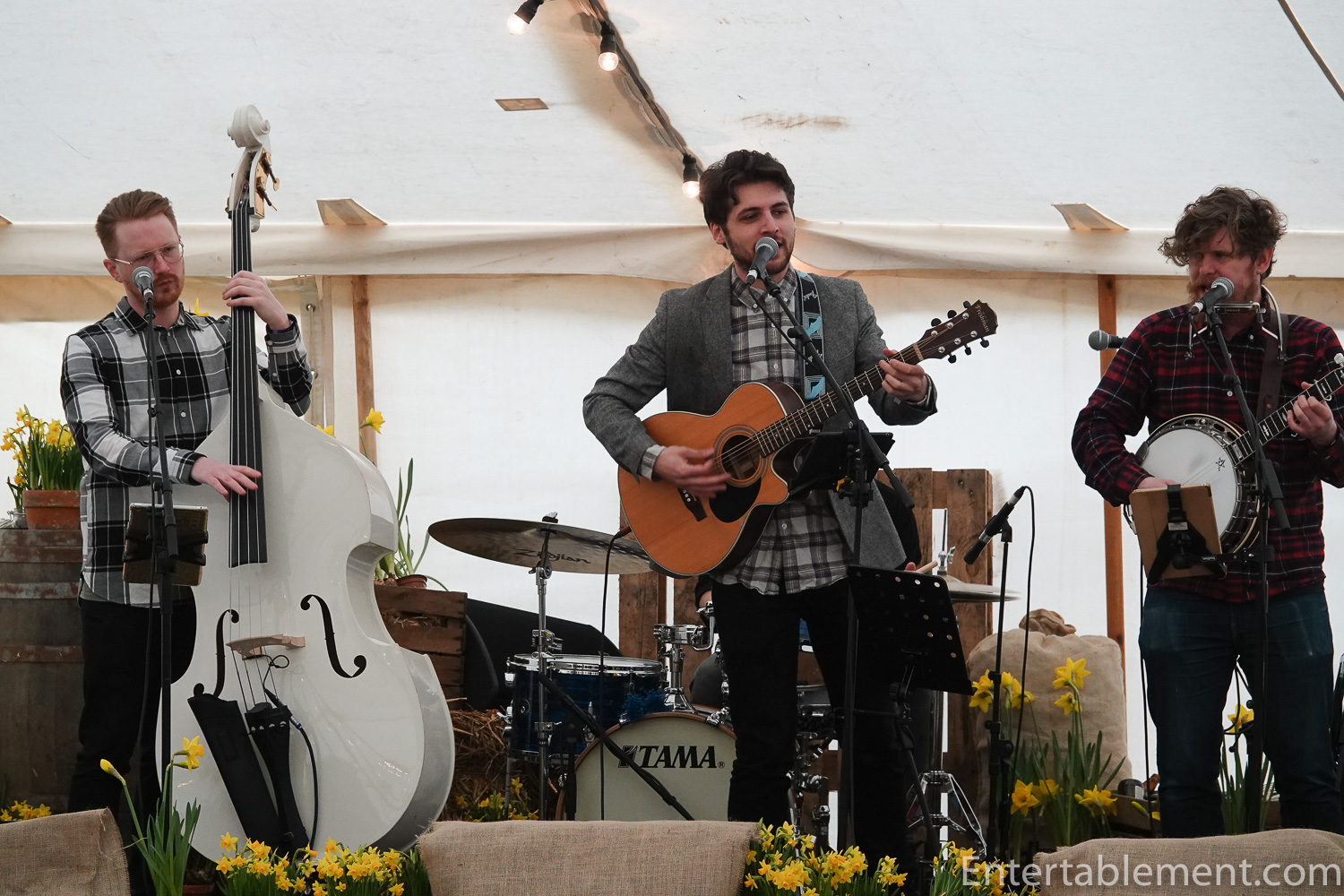 The Members’ Marketplace next door to the Daffodil Tent continued the “country theme” with strings of lights, loads of flowers, fruits and vegetables. 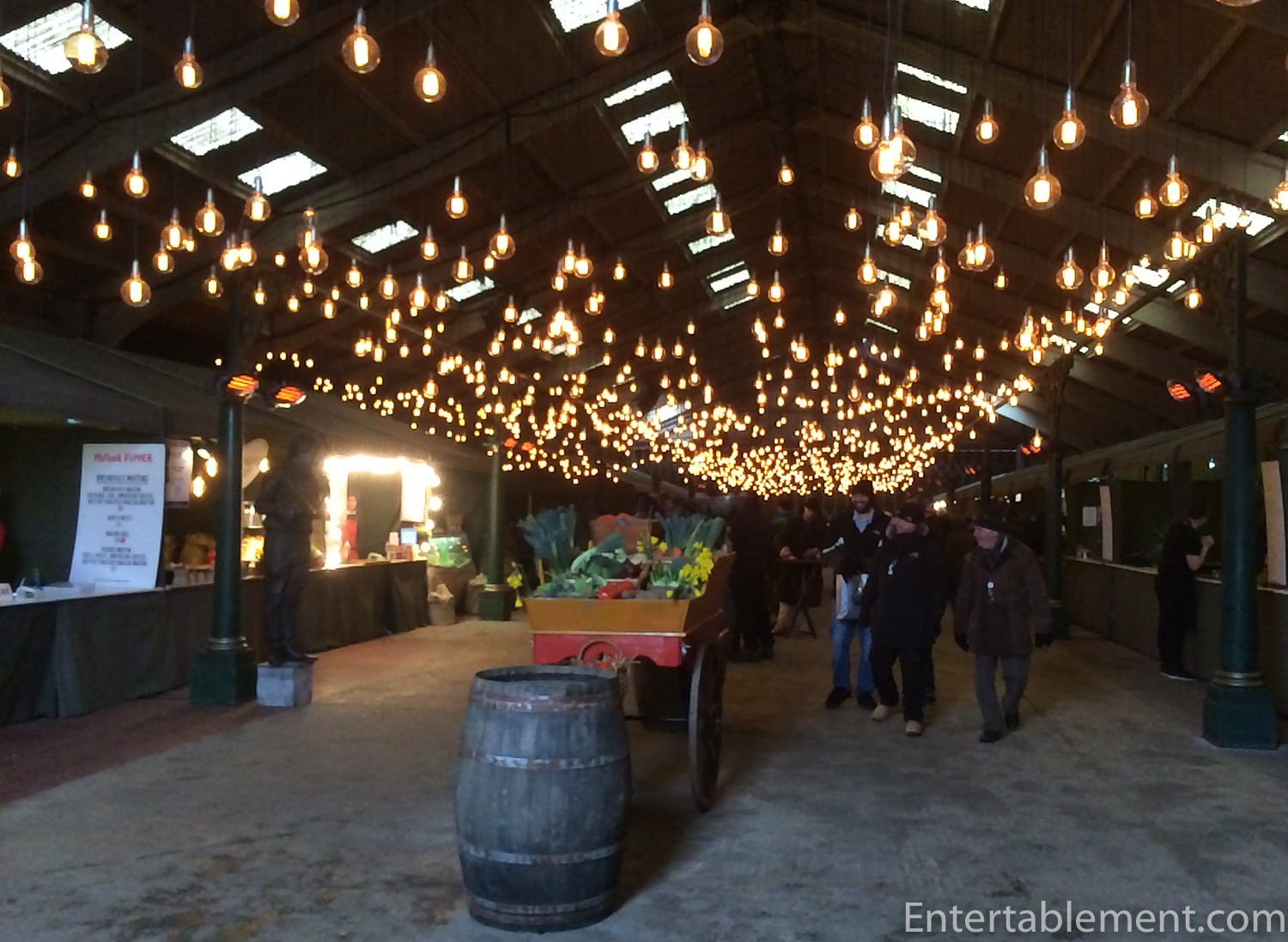 Food and beverages were available all day, along with some comfortable seating. 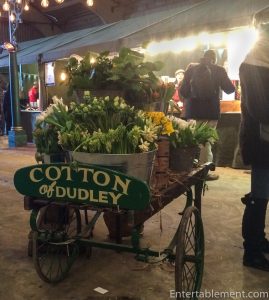 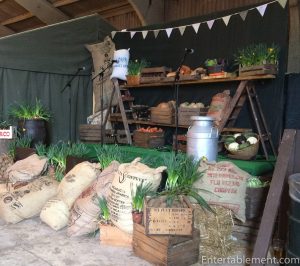 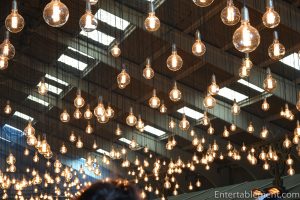 Despite the weather, it was a really fun event and I look forward to our next visit to Goodwood for its sense of fun and adventure… 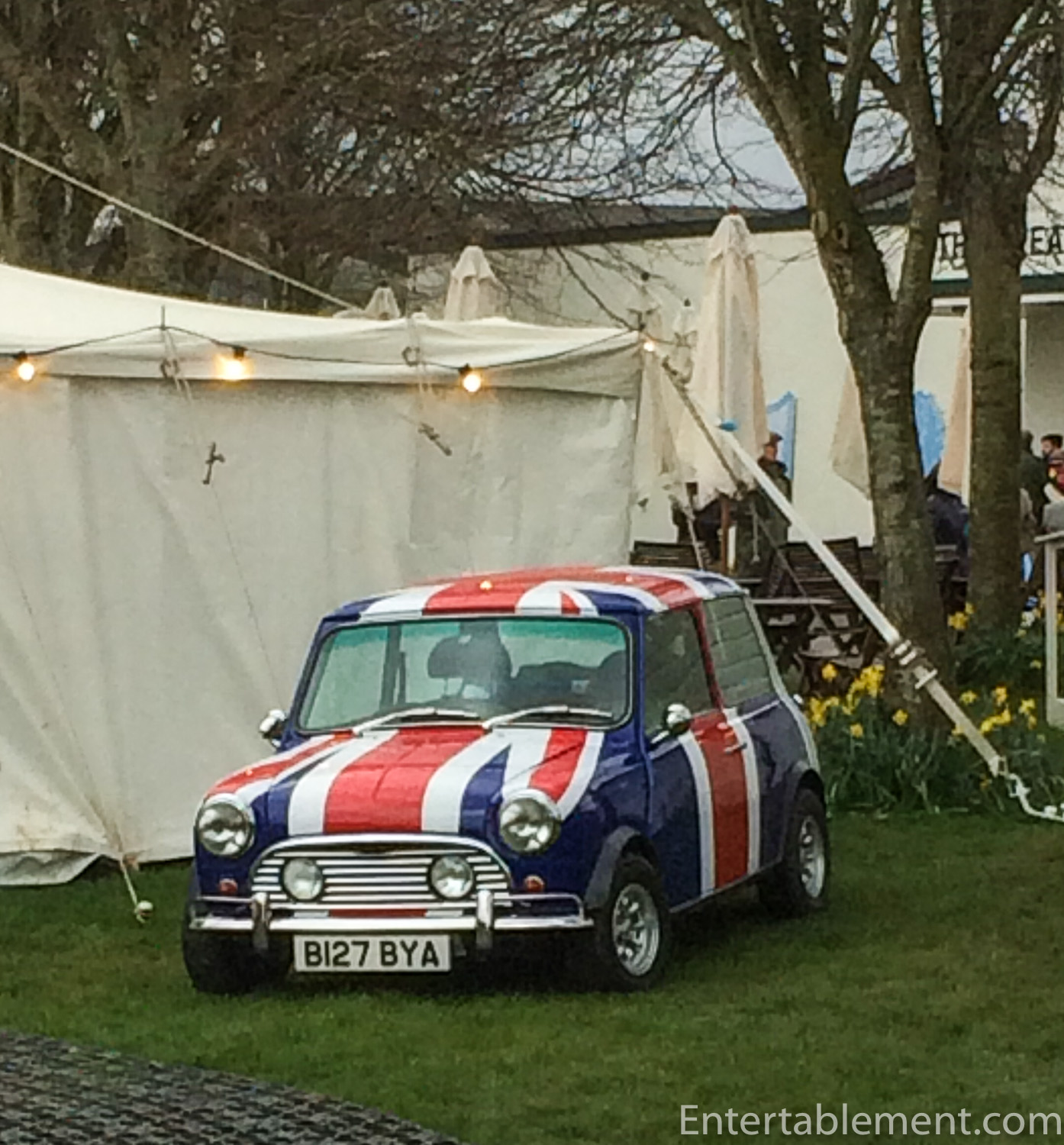 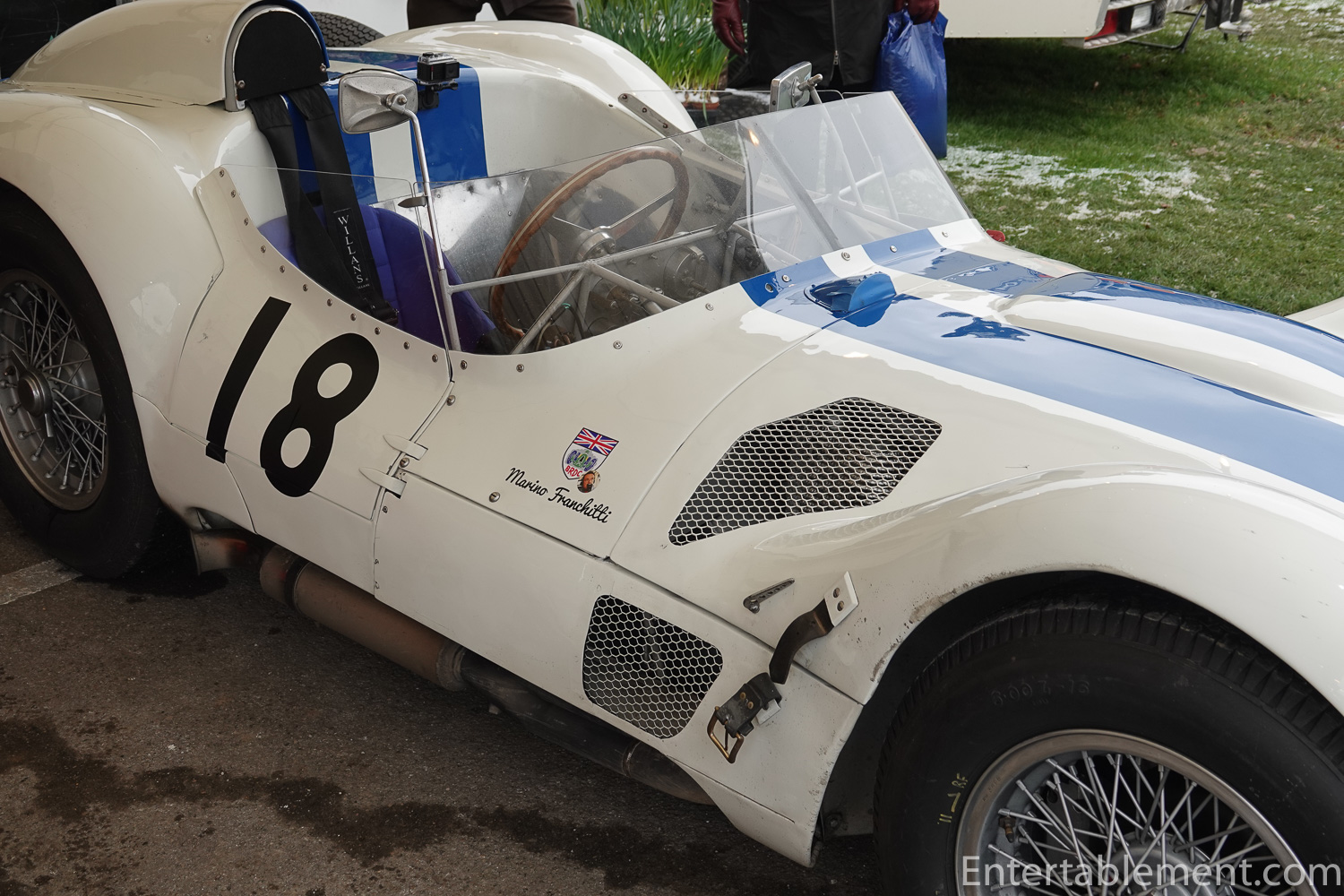 We’re now settled in Wiltshire, at a self-catering place called Valentina’s Lost Orangery. I kid you not! It’s located on the grounds of a larger estate out in the country, accessible by the typical English one-car-width country road with a posted speed limit of 60 miles an hour. I’ll fill you in on the next post!