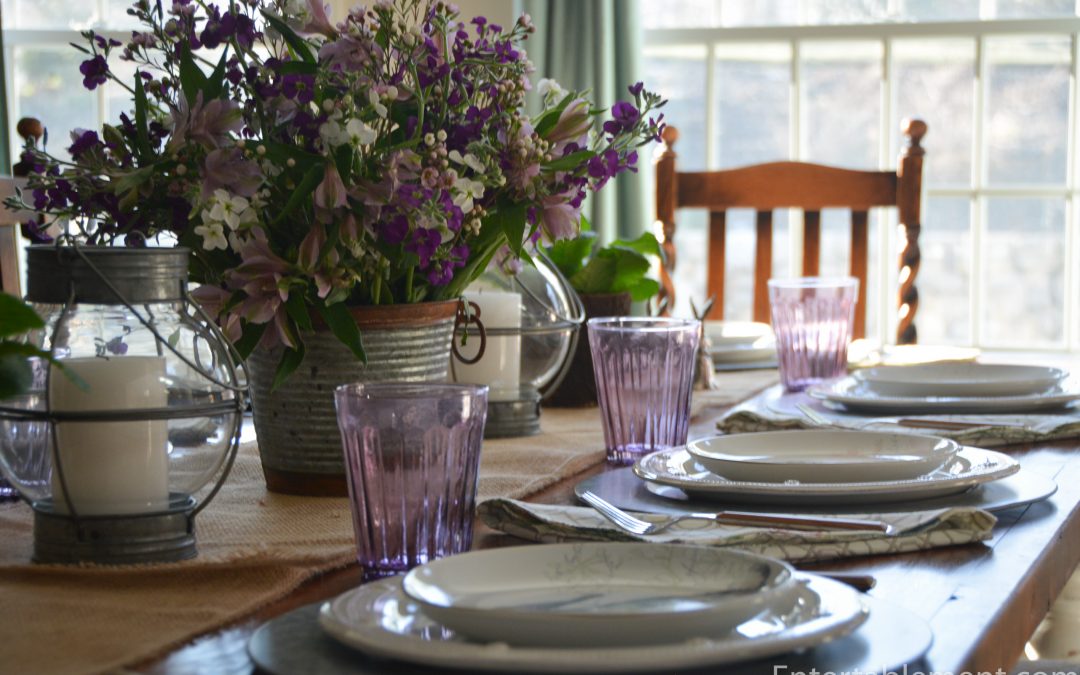 These whimsical rabbit plates by Pier 1 reminded me forcibly of Twix, a miniature Rex bunny belonging to daughter Lauren she was little. While I am the enthusiastic staff of dogs and cats, the parade of rodents that seemed to follow Lauren everywhere proved a challenging phase in motherhood. Her small furry friends ran the gamut from quite lovely hamsters each named Cuddly (I through IV), one rather aggressive brute called Arnold Schwarzenhamster, a few gerbils whose rapid movements drove the cats nuts and thus usually met a bad end, through to Ralph, the African Pygmy Hedgehog. Somewhat ironically, she now has a rather massive German Shepherd, called Rabbit The Dog. Go figure!

This guy in particular looks very much like Twix with his diminutive and chubby person. 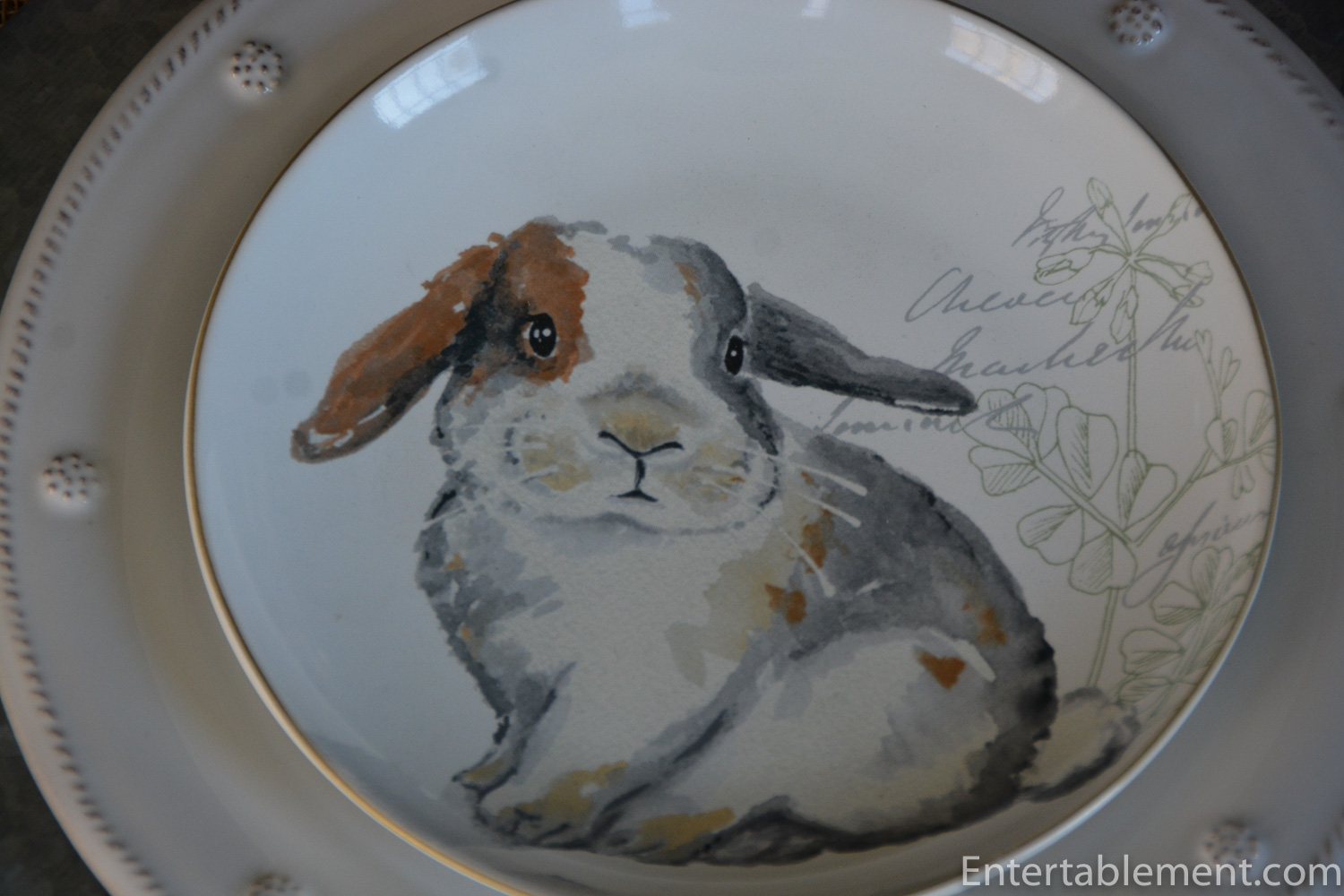 Typical of Pier 1’s salad plate offerings, there are four different illustrations, all in soft shades of grey and brown, with touches of pink and pale blue. 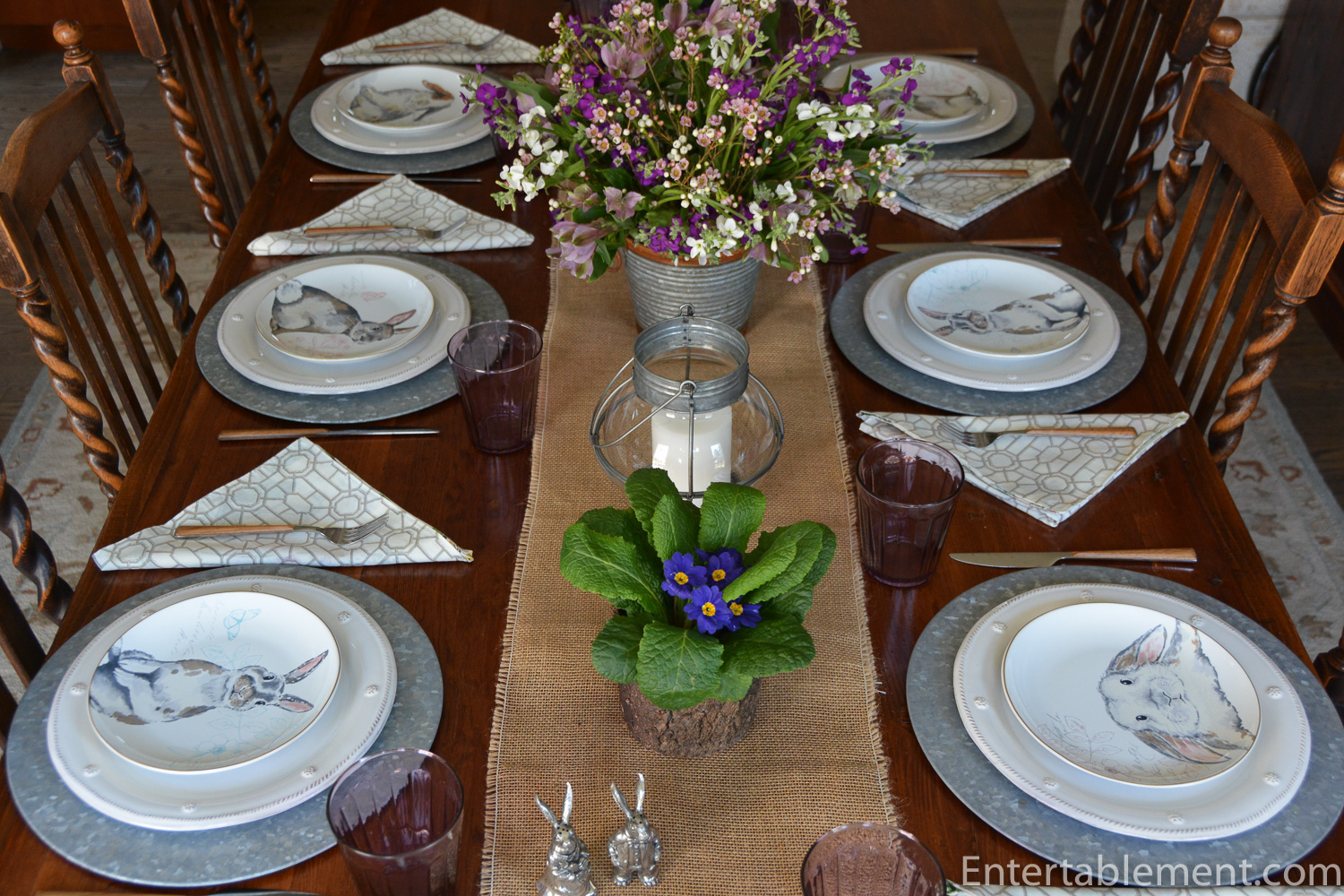 This upright bunny with touches of pink and soft blue seems to be saying “Who me???” 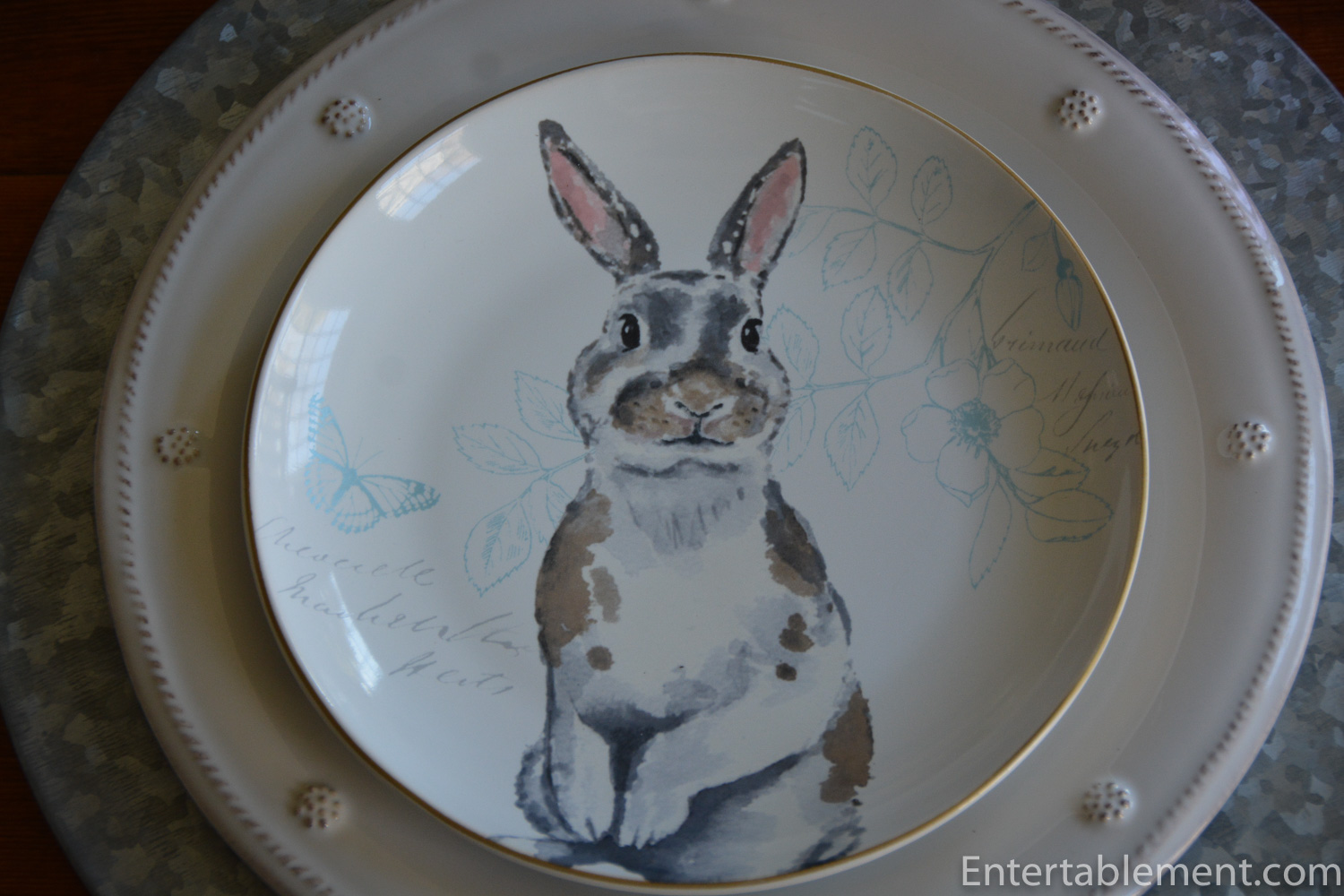 Then we have a wary bunny, with his ears lowered appeasingly. 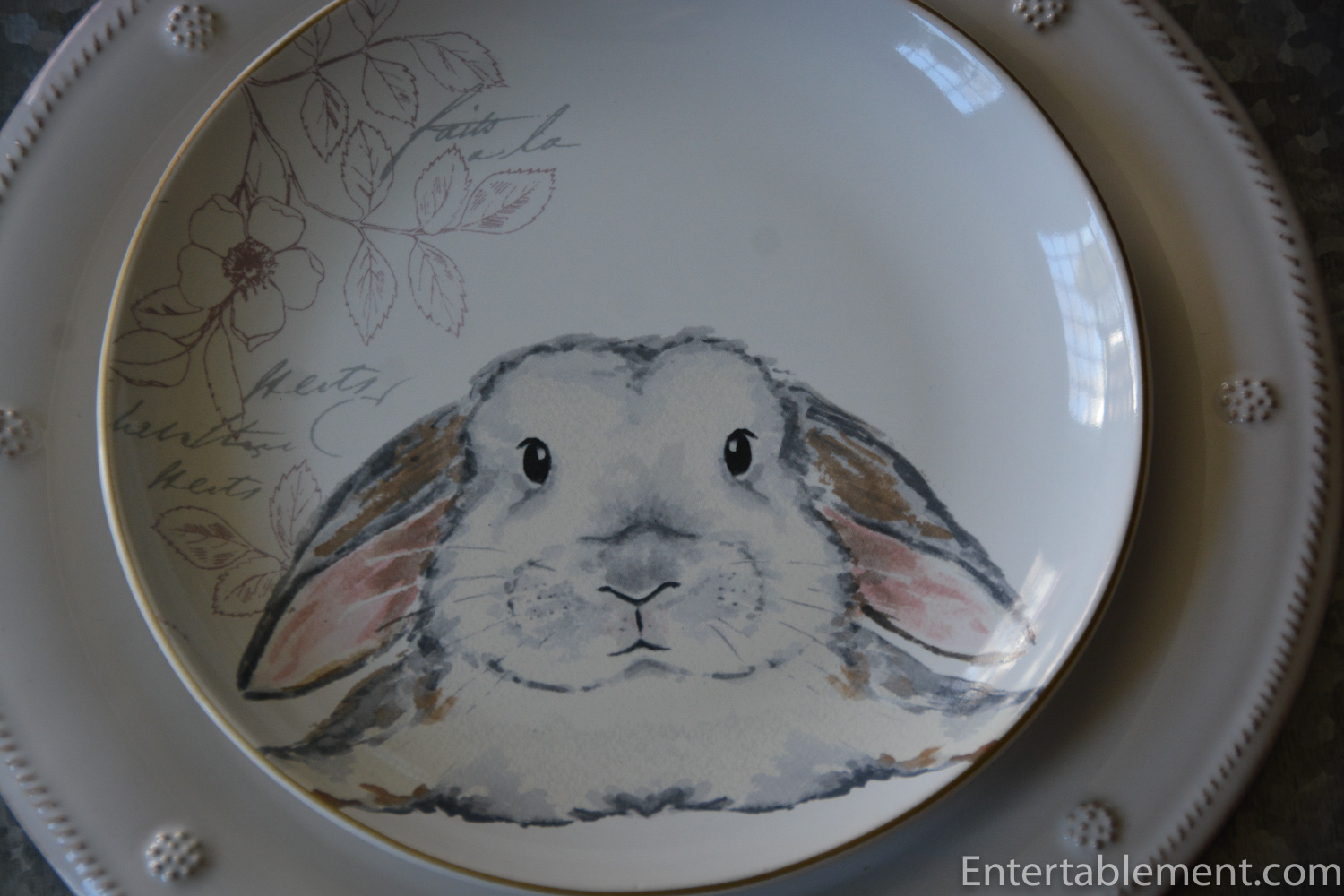 The last one is also upright, turned to look coyly over its shoulder. The artist has captured beautifully the slightly anxious and somewhat harried look rabbits always seem to sport. 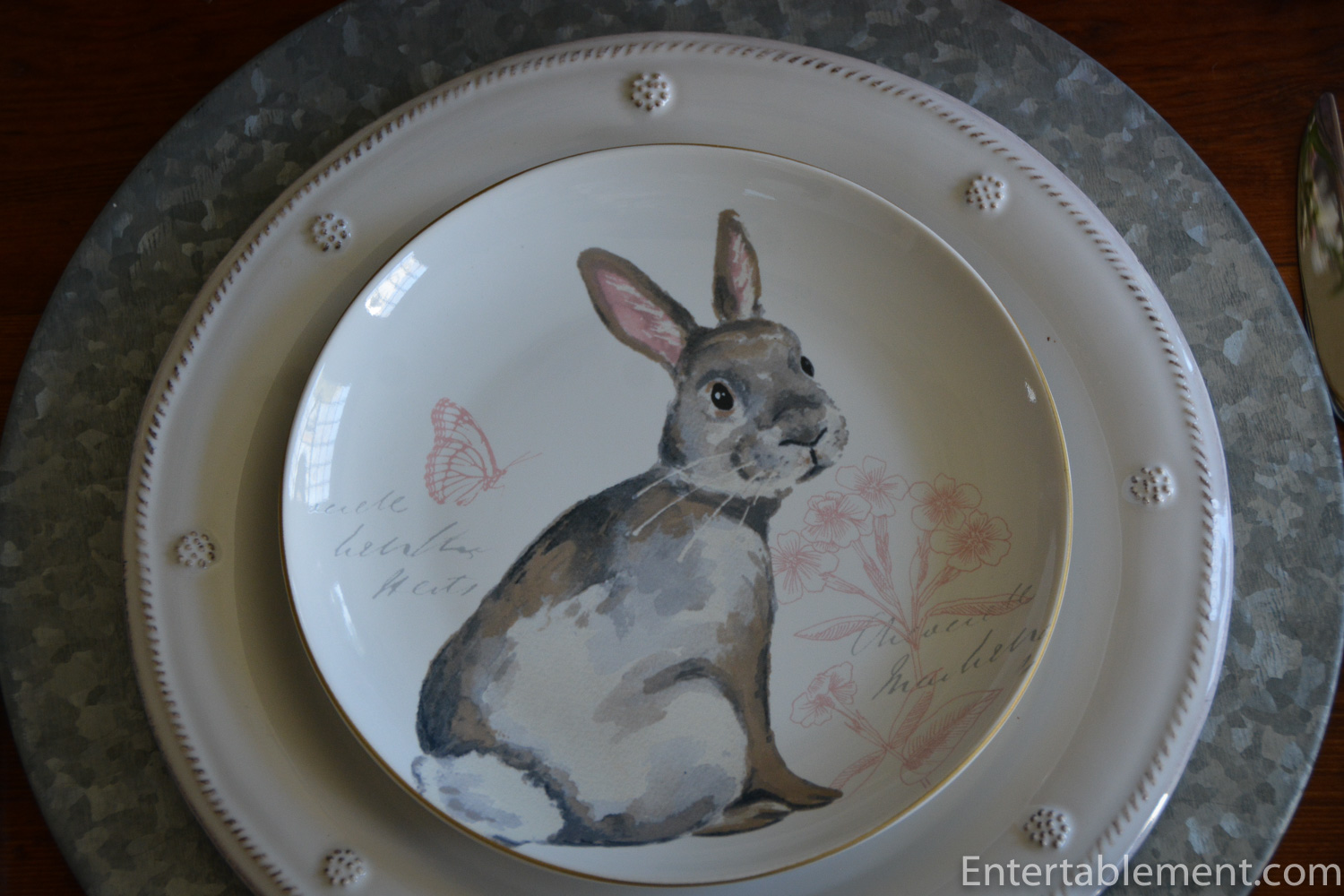 I stuck with natural/rustic theme for the table with galvanized chargers, wooden handled cutlery and a burlap runner. The napkins are the reverse side of a chinoiserie pattern I picked up a couple of years ago from Wayfair. The dinner plate is Berry and Thread by Juliska. 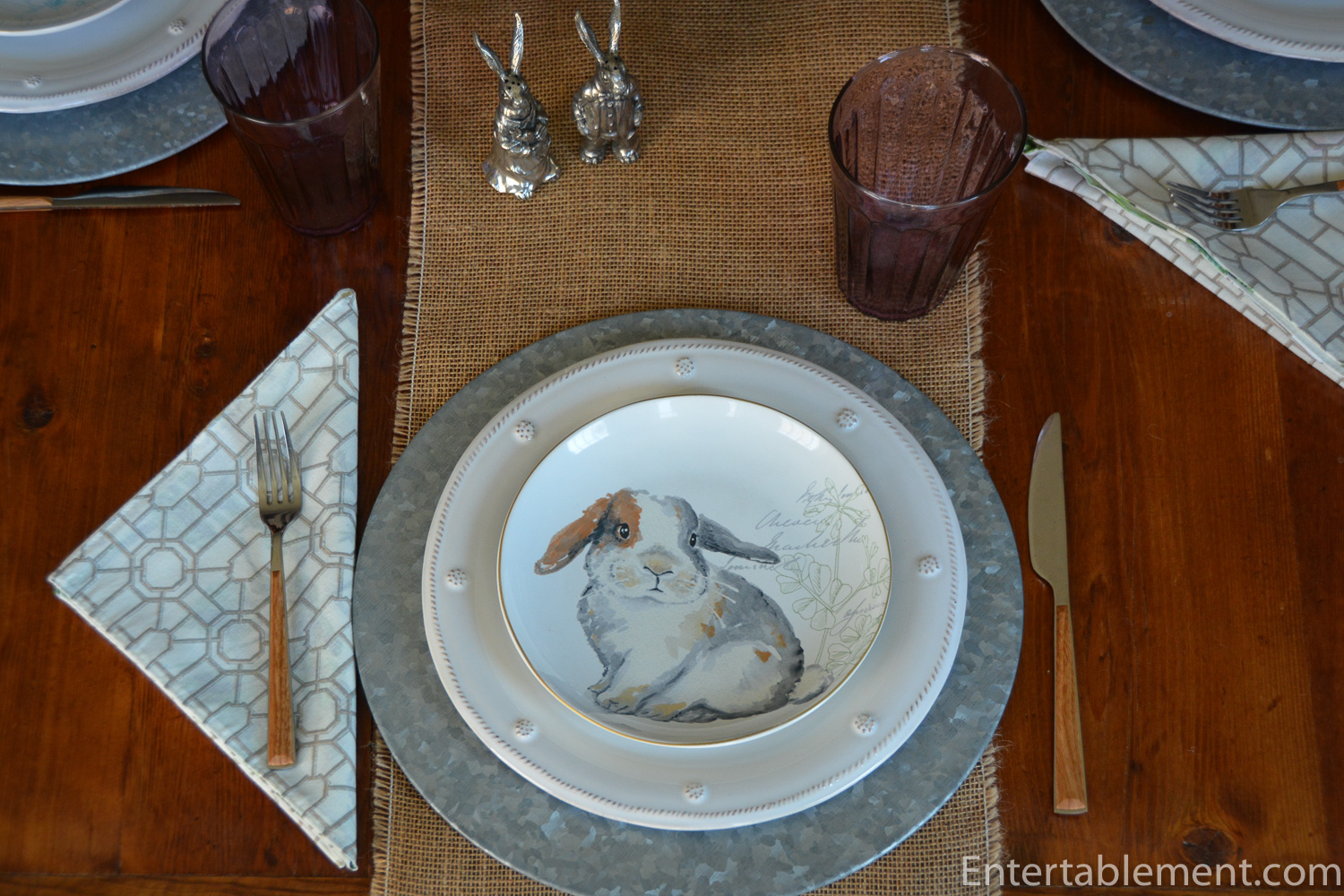 A galvanized container for a collection of wax flowers, stock and alstroemeria from Trader Joe’s and tin lanterns from Harvest of Barnstable continued the rustic metal theme. 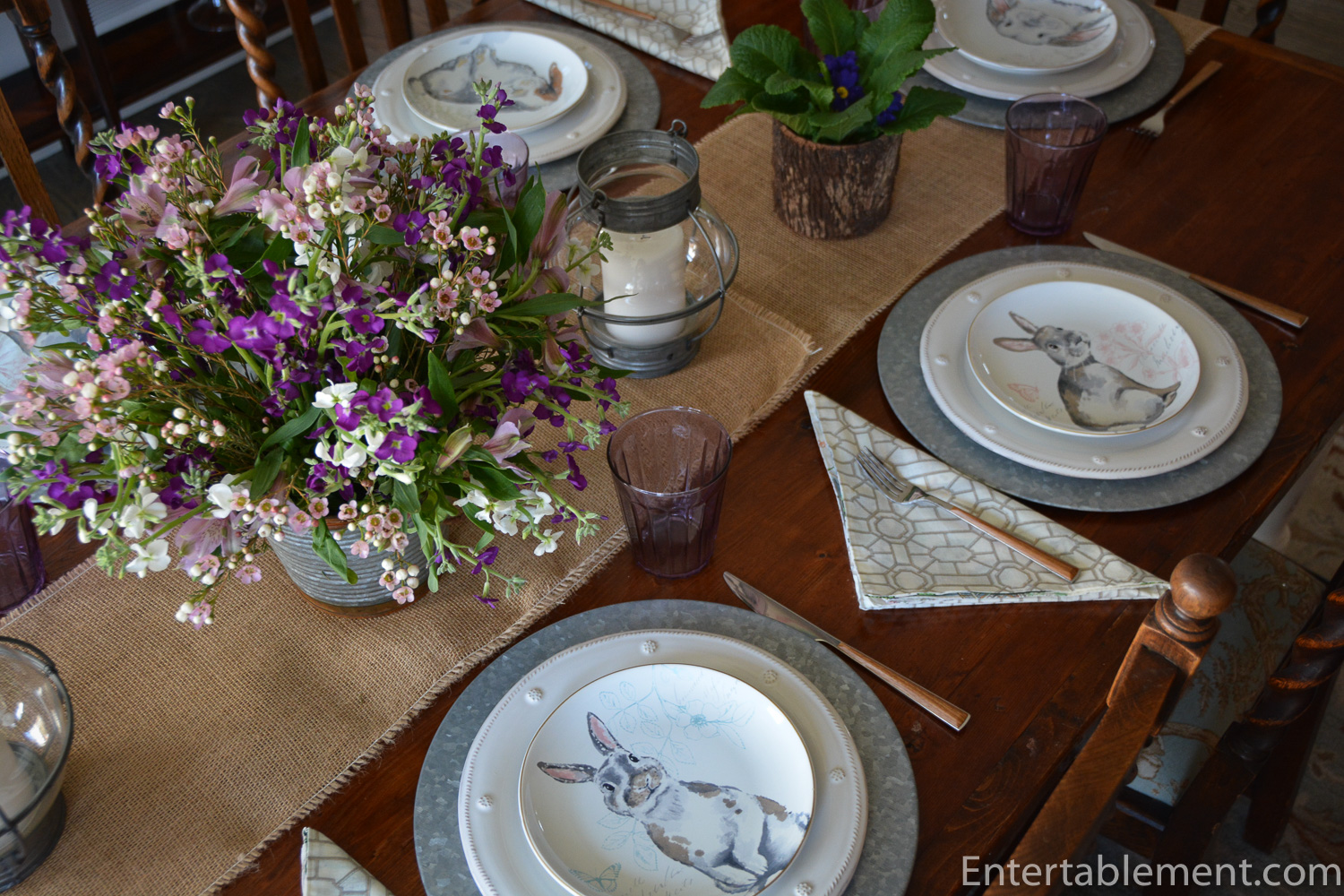 The amethyst tumblers are from Pottery Barn a couple of years ago. 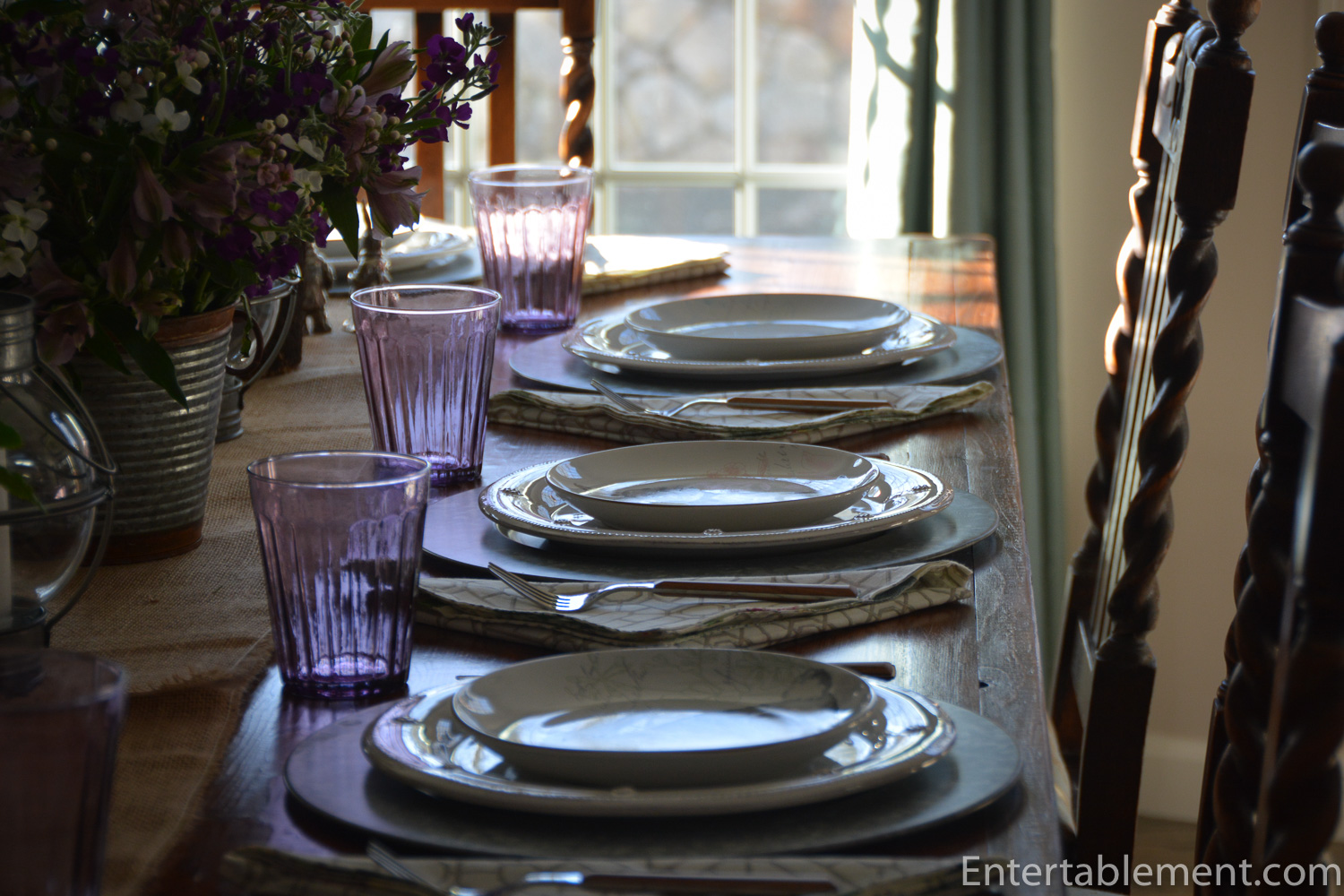 They’re generously sized and very practical. I really like the shade of lavender, which provides a touch of subtle oomph to the table. 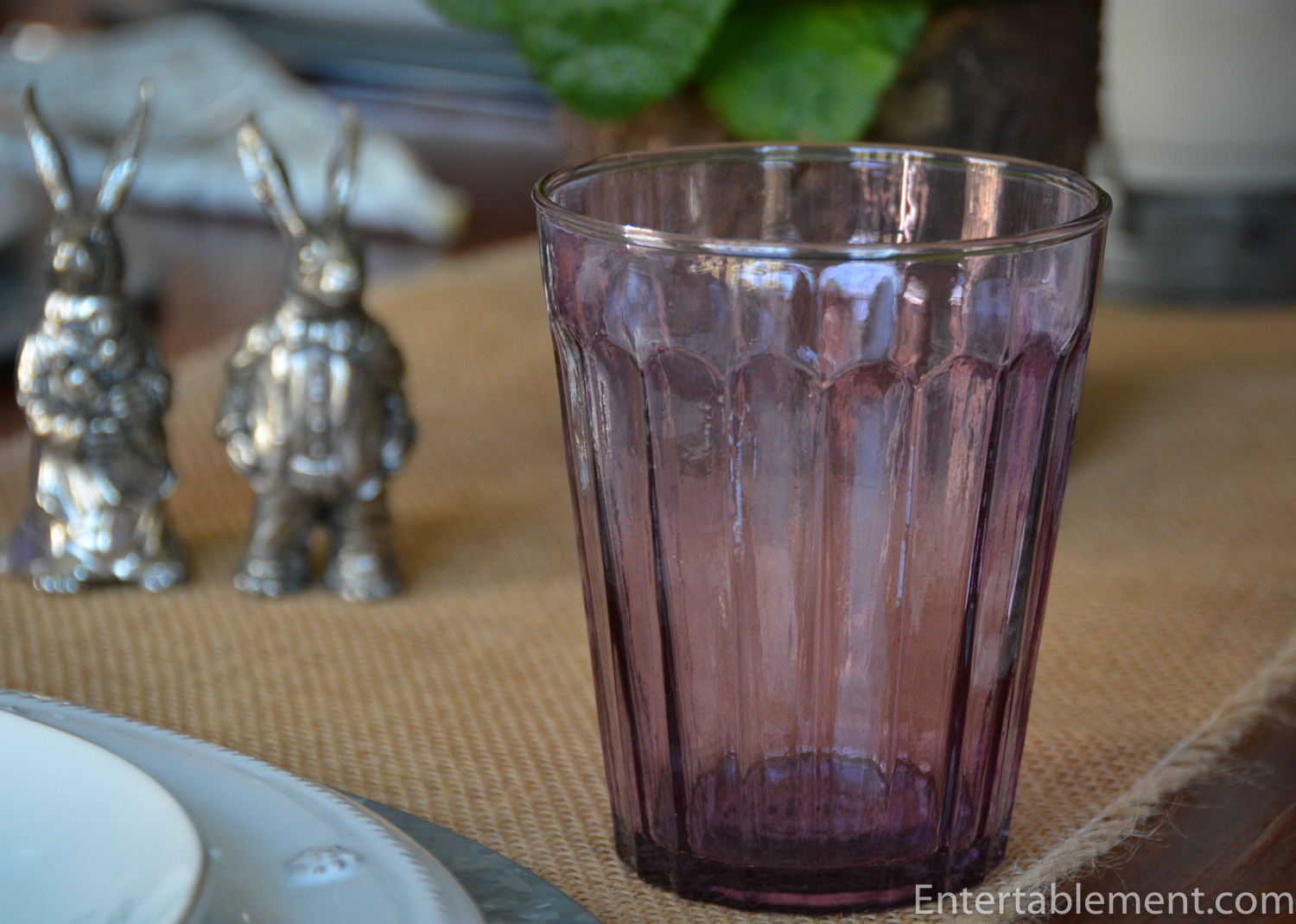 The “Dressed Rabbits” salt and pepper shakers are from Vagabond House. They add touch of formality and raise the tone, don’t you think? 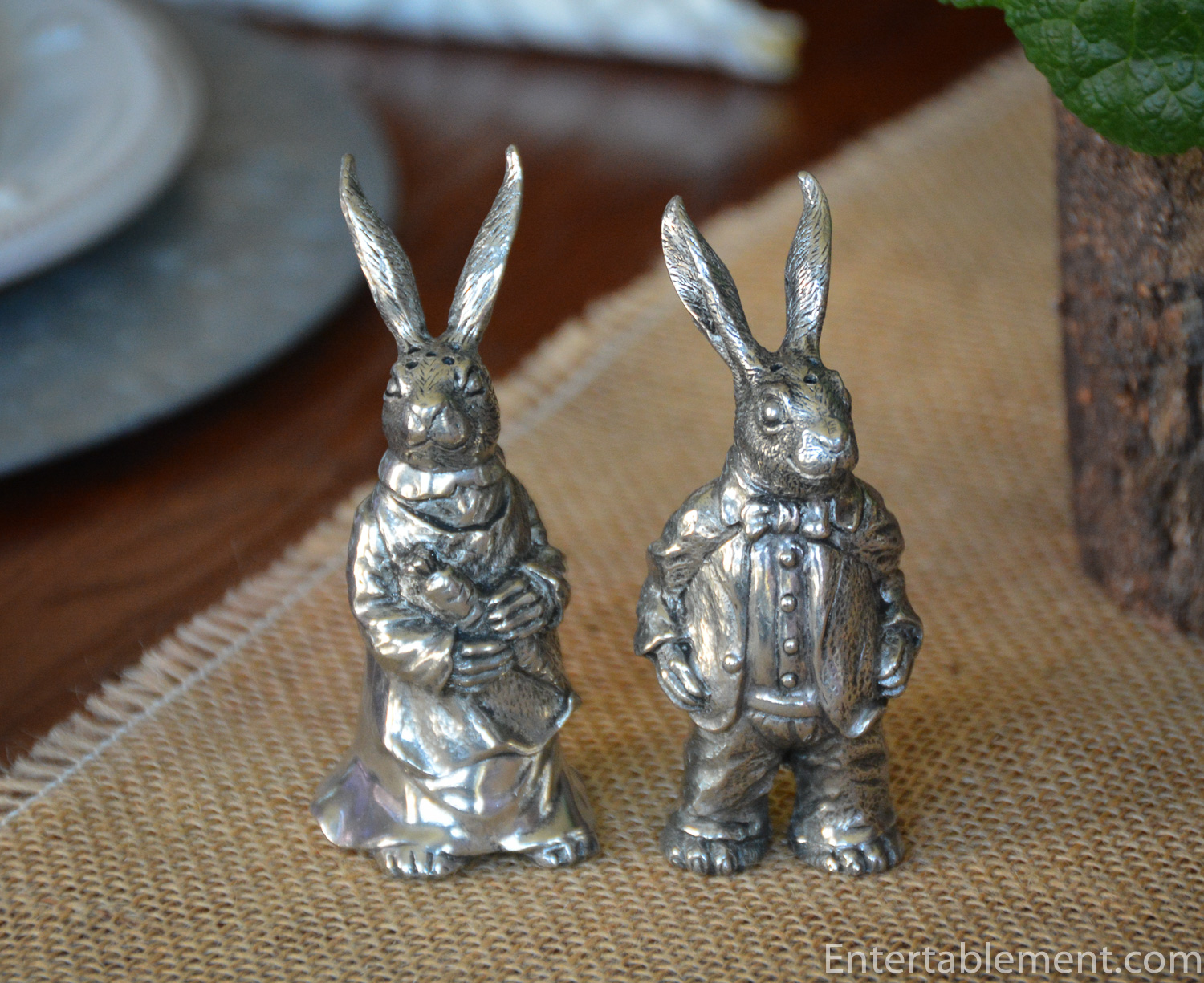 While the plates do not actually have lavender in them, I think the colour tones nicely with the pink and blue, and creates an aura of spring. 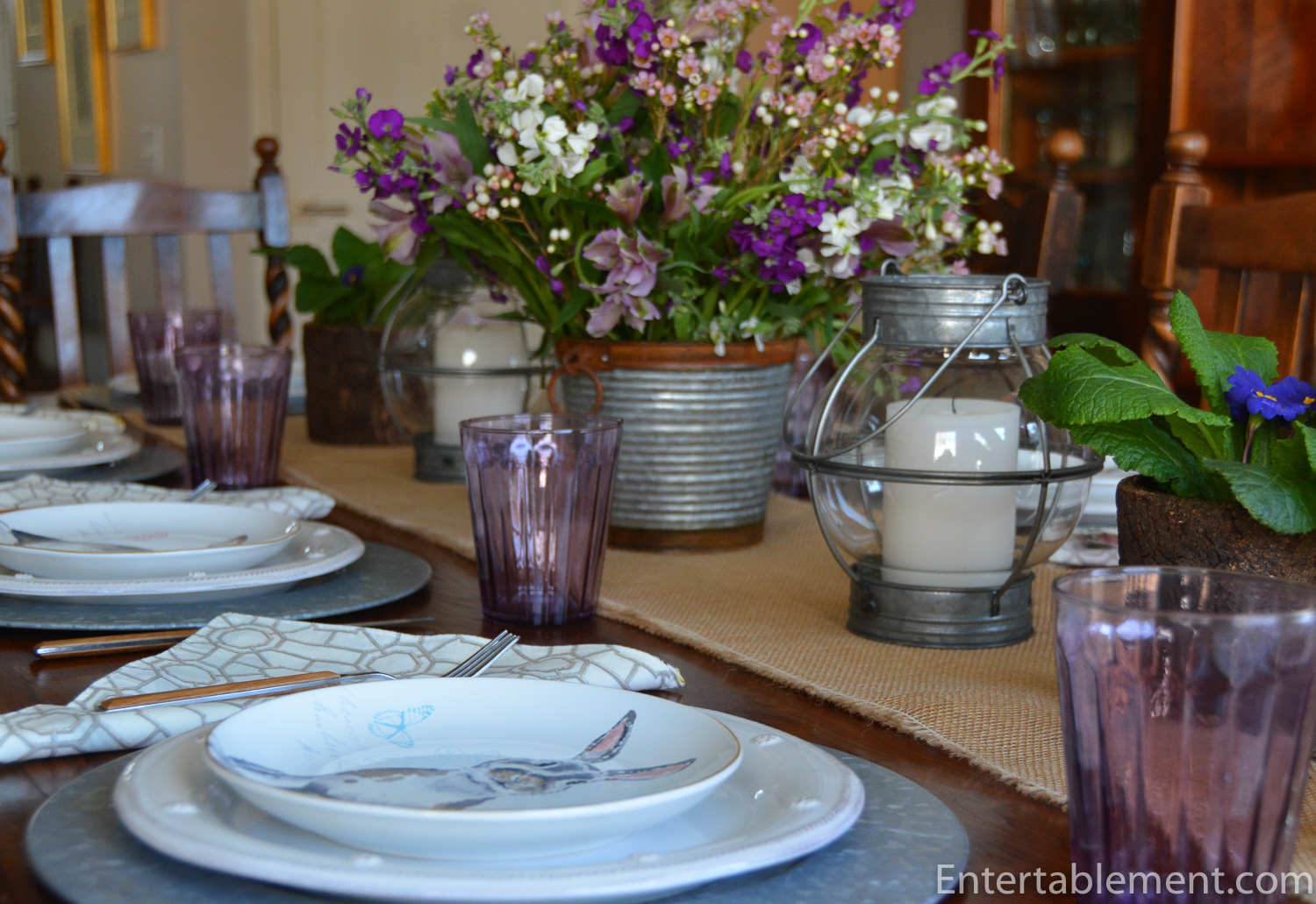 Bye the by, the rabbit plates are on clearance at Pier 1 as we speak. This is the second year they have had the pattern, and there is also a very cute dinner plate. 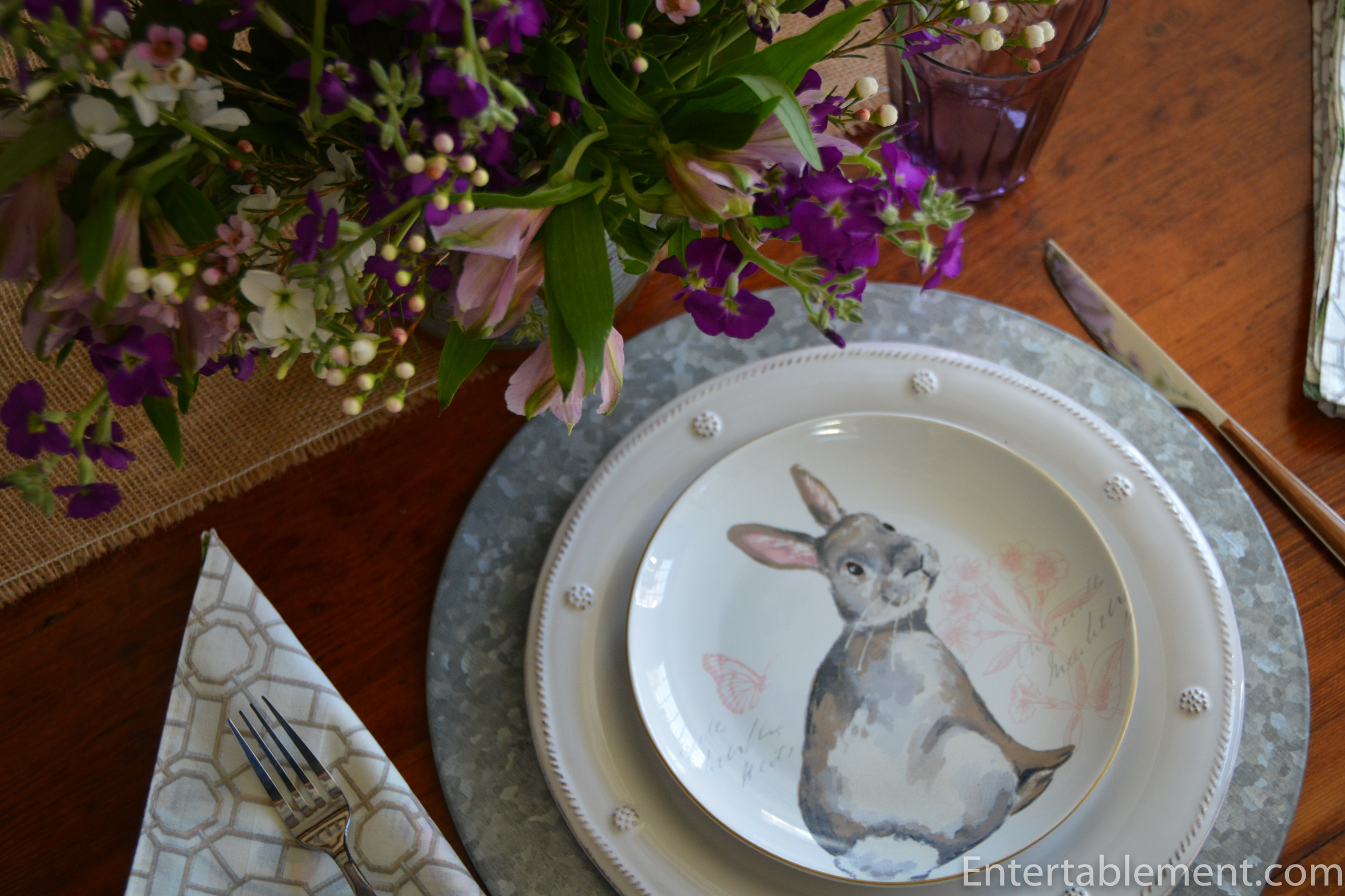