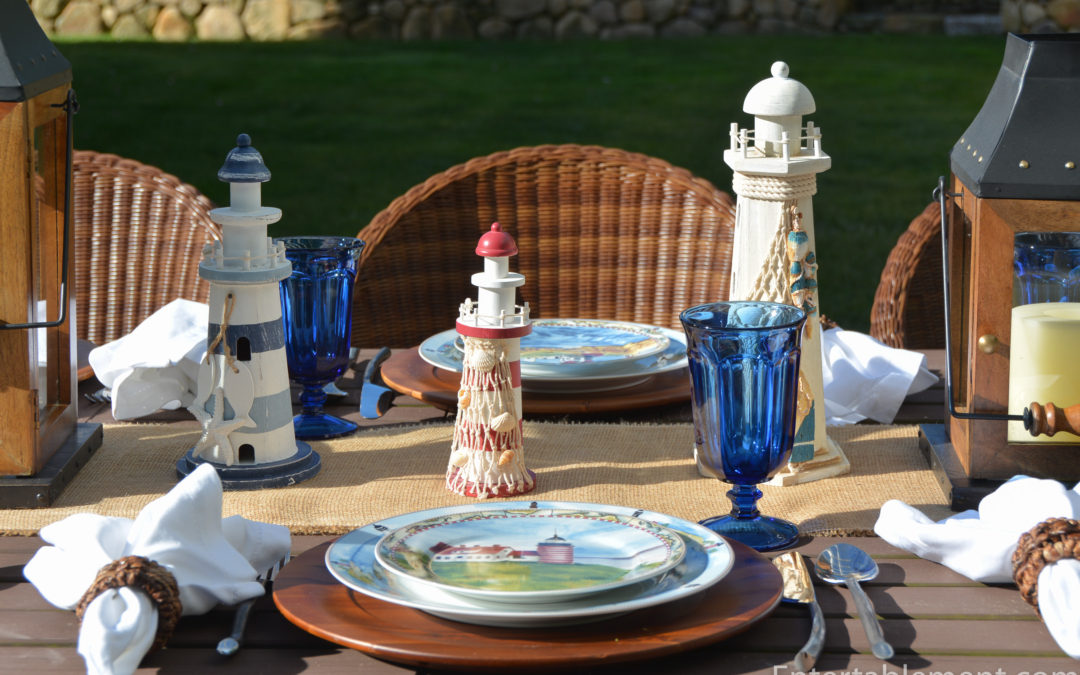 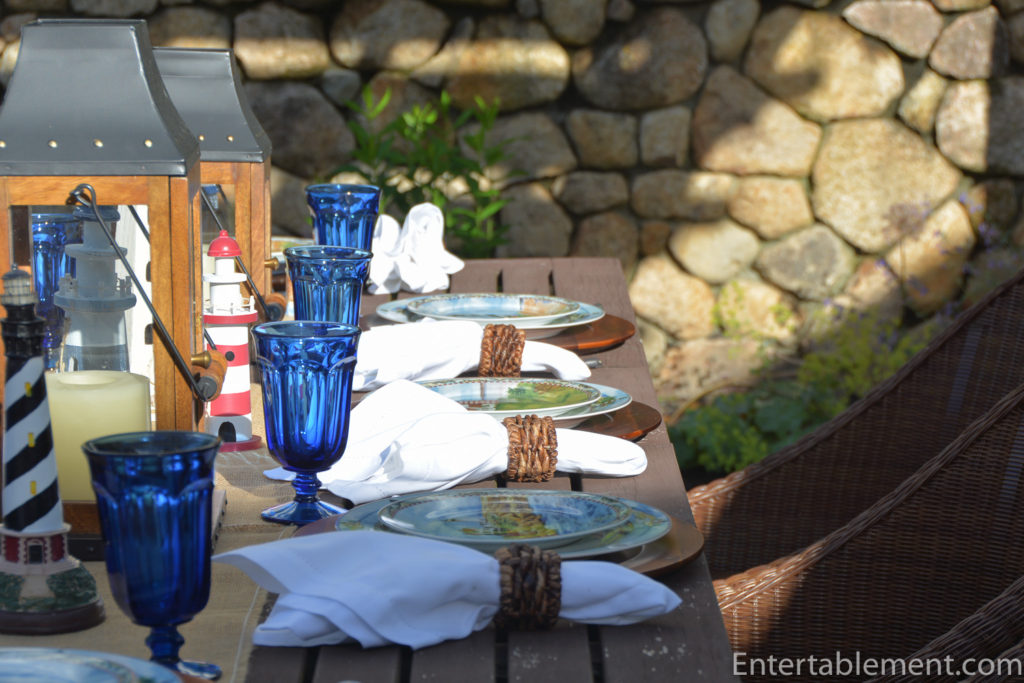 Where better to start than with Signals by American Atelier? A thoroughly seafaring pattern, you can smell the salt air just looking at it. 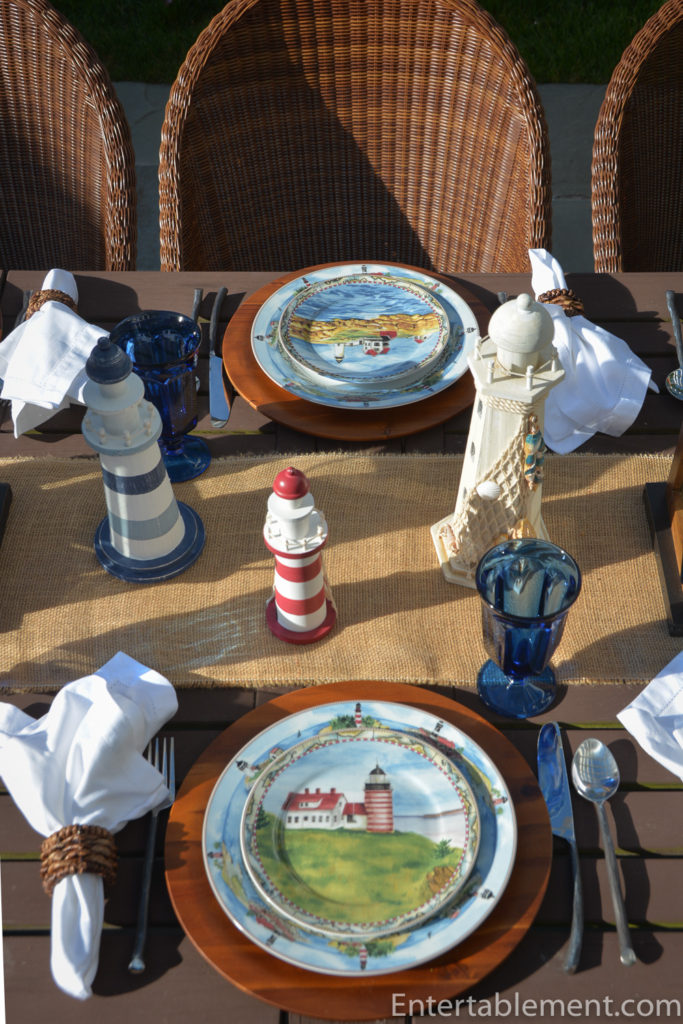 The pattern was produced between 2000 and 2006 and is well-priced and available on eBay. 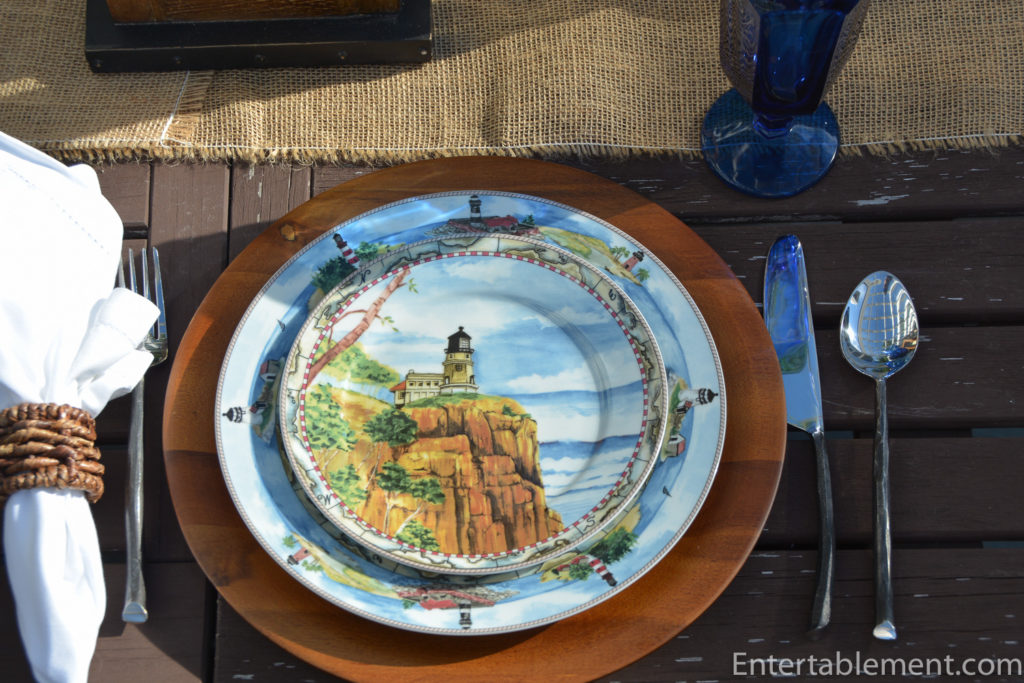 Unusually for me, I didn’t stop with the four different salad plates but also purchased the dinner plates, complete with lighthouses all around the rim. The plain white centre makes them very food-friendly, too. 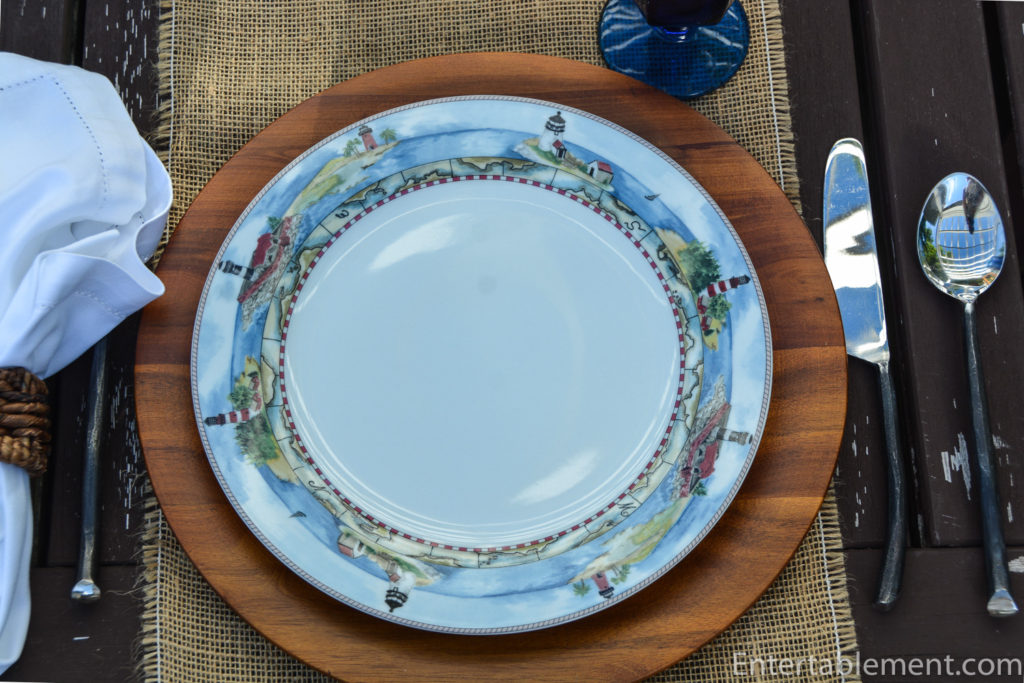 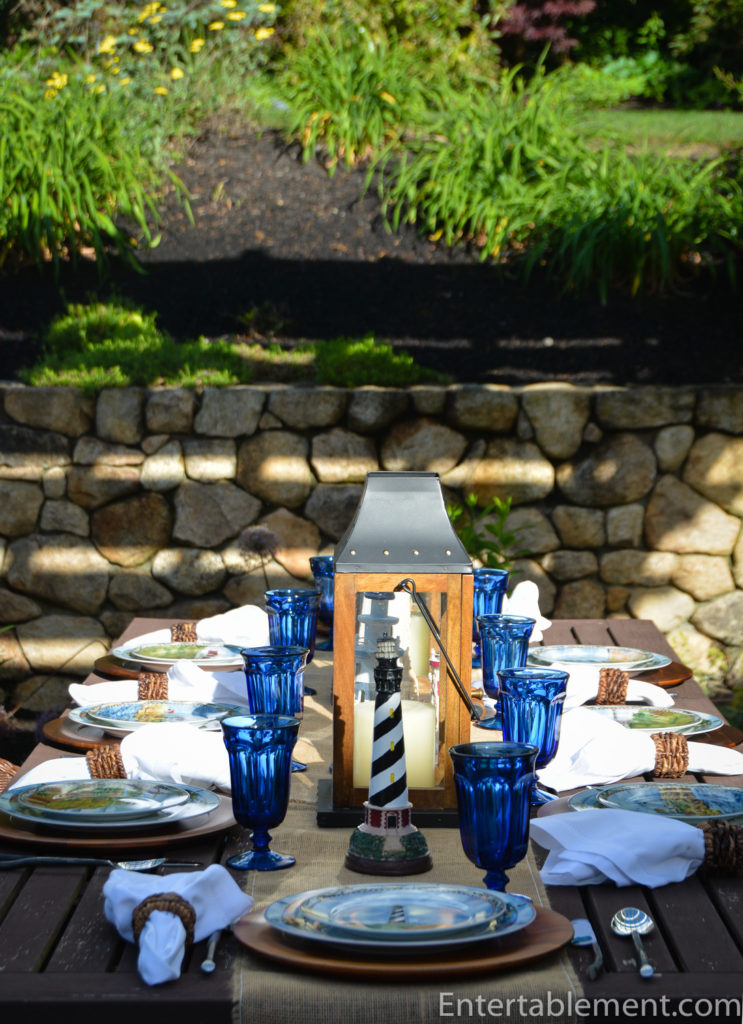 The four different salad plates feature famous lighthouses in New England and around the Great Lakes. This one is in Cape Neddick, York Beach, Maine.  Built in 1879, it’s commonly called “The Nubble”. 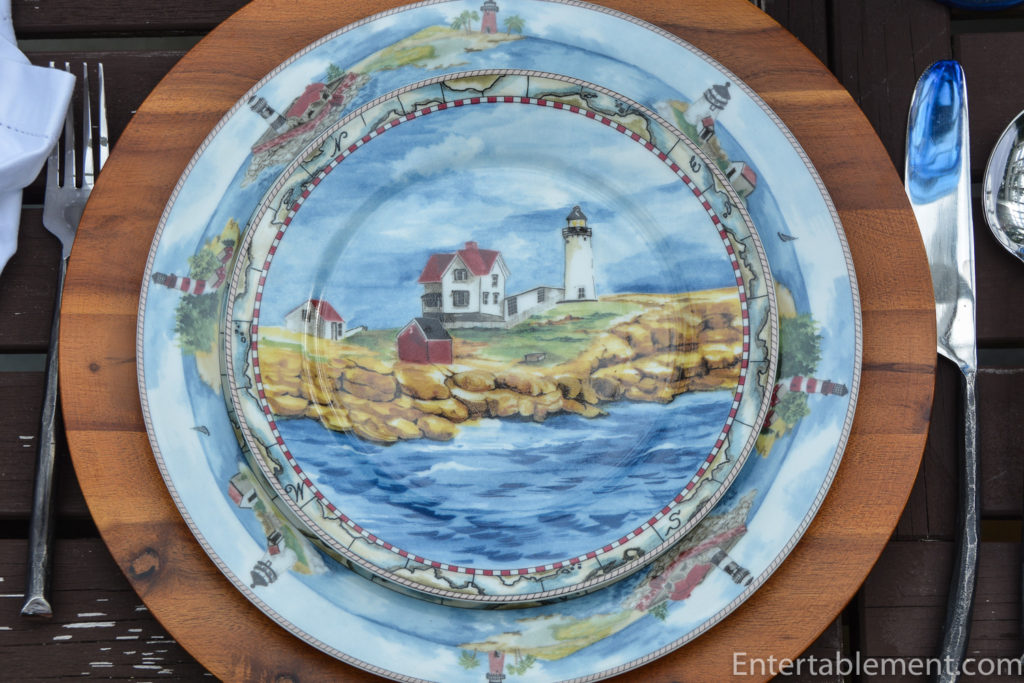 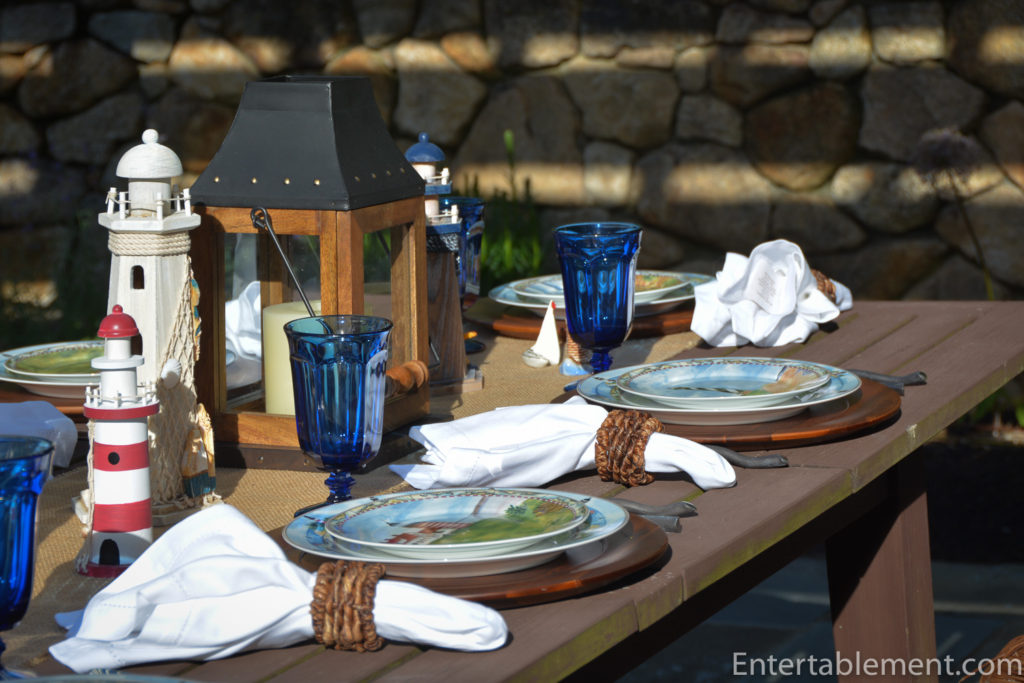 Split Rock (named for obvious reasons) is located on the North Shore of Lake Superior in Silver Bay, Minnesota;  it was built in response to a great storm in 1905 in which 29 ships were lost. 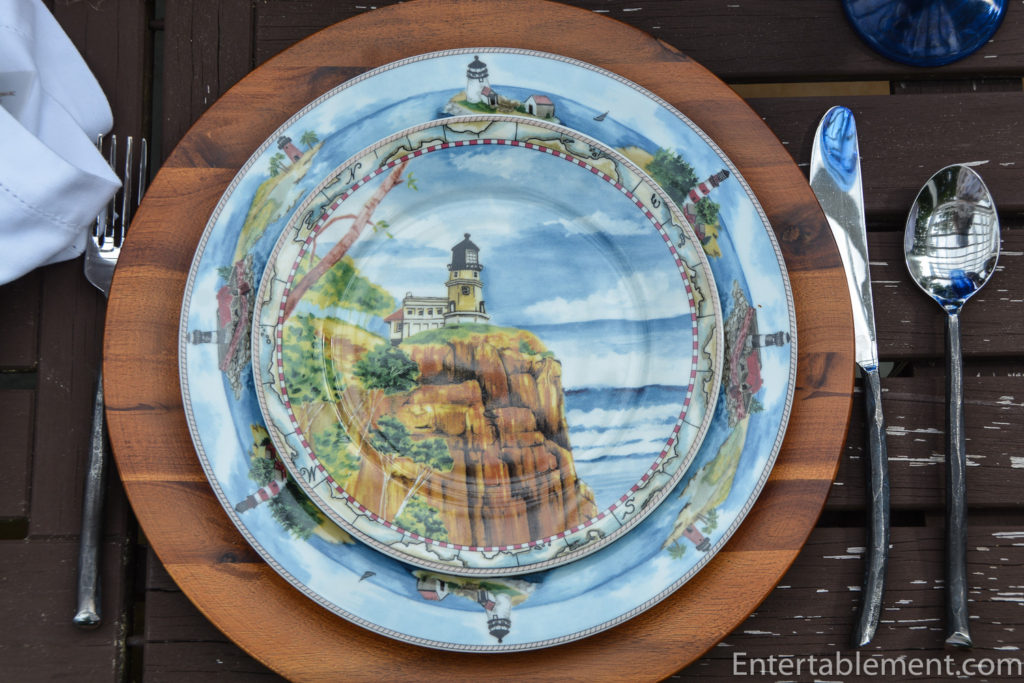 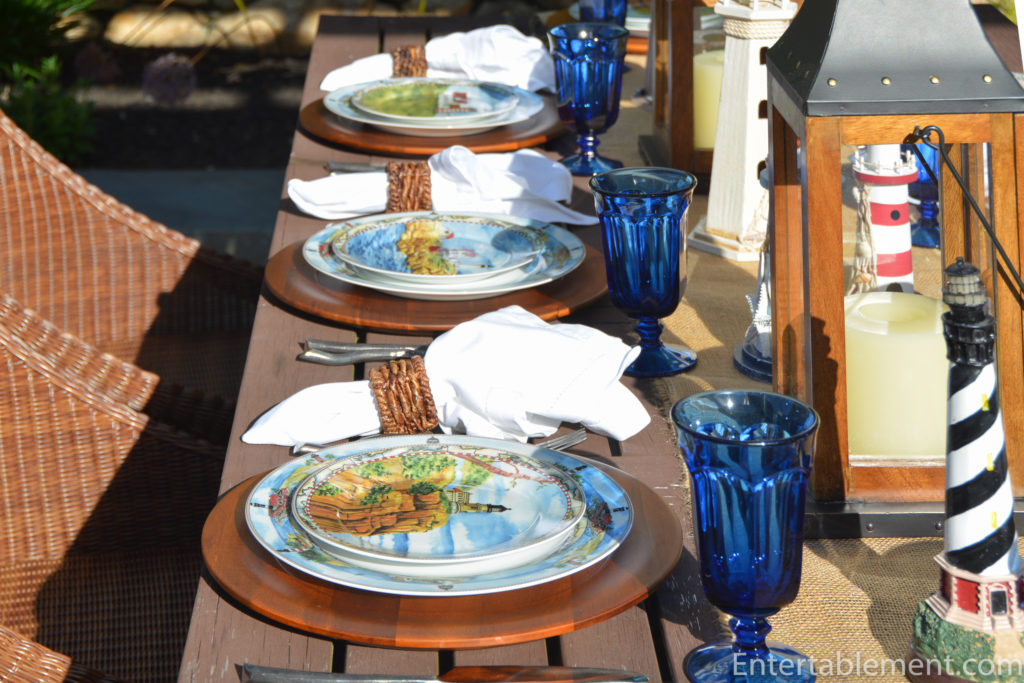 West Quoddy Head Light is in Lubec, Maine. The distinctive red and white striped lighthouse you see depicted below was built in 1858, though there have been lighthouses on that spot since 1808. Apparently, it’s the easternmost part of the United States. 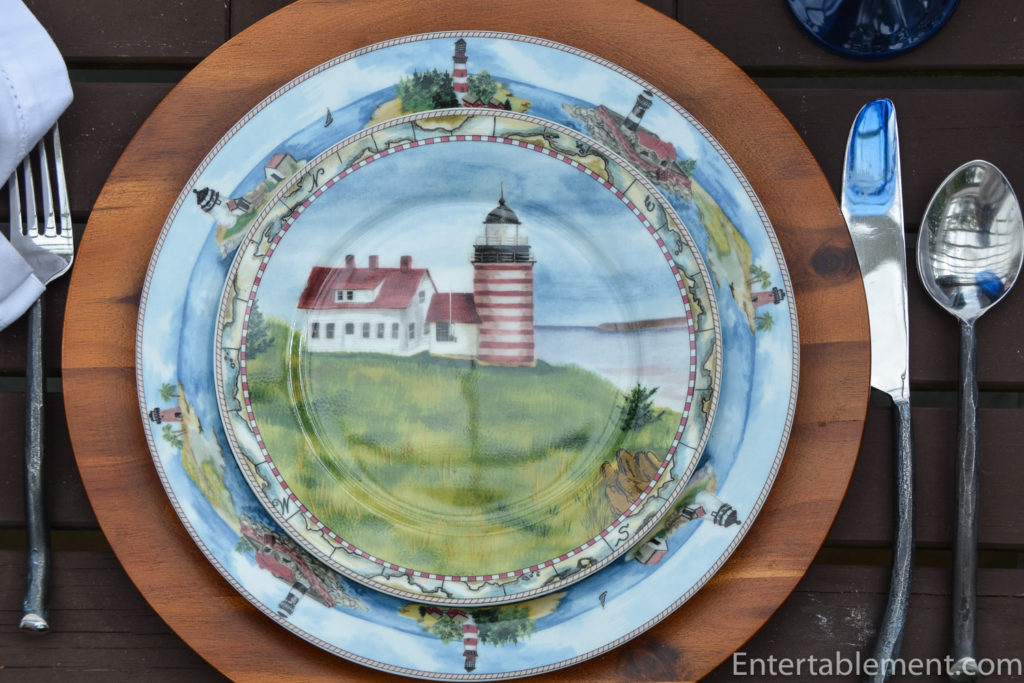 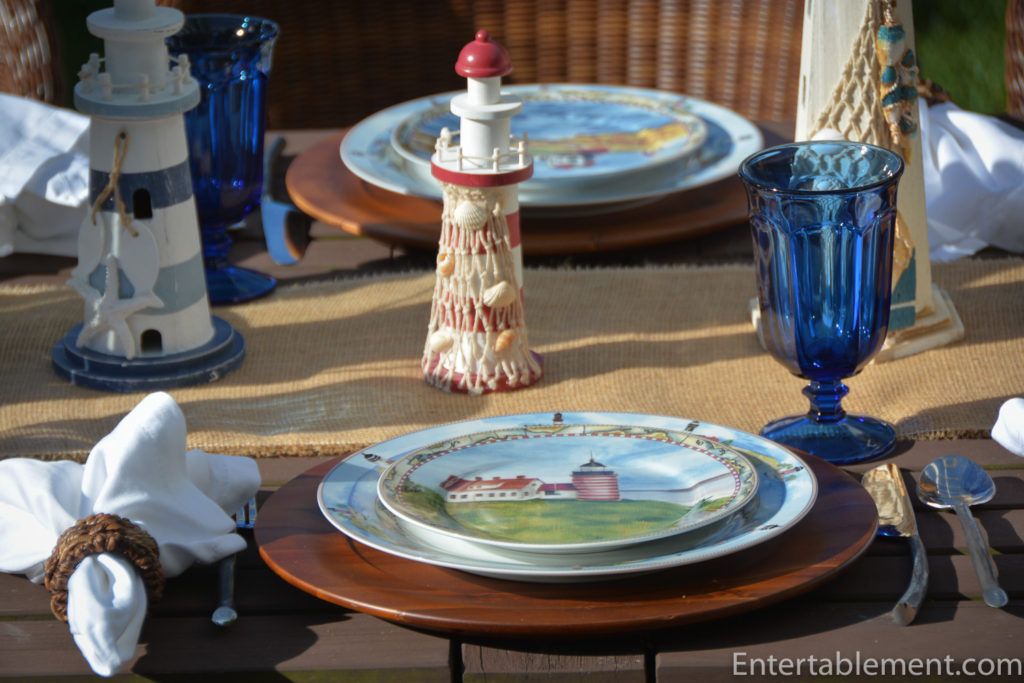 Cape Hatteras Lighthouse, famous for its black and white stripes, is on the Outer Banks of North Carolina in the town of Buxton. The original lighthouse, constructed in 1802, was apparently next to useless; the light simply was not bright enough to guide ships safely through the shoals. The replacement depicted below was built in 1871 and was the tallest lighthouse in the world at the time. It was fitted with more up to date technology, affording a much brighter light. 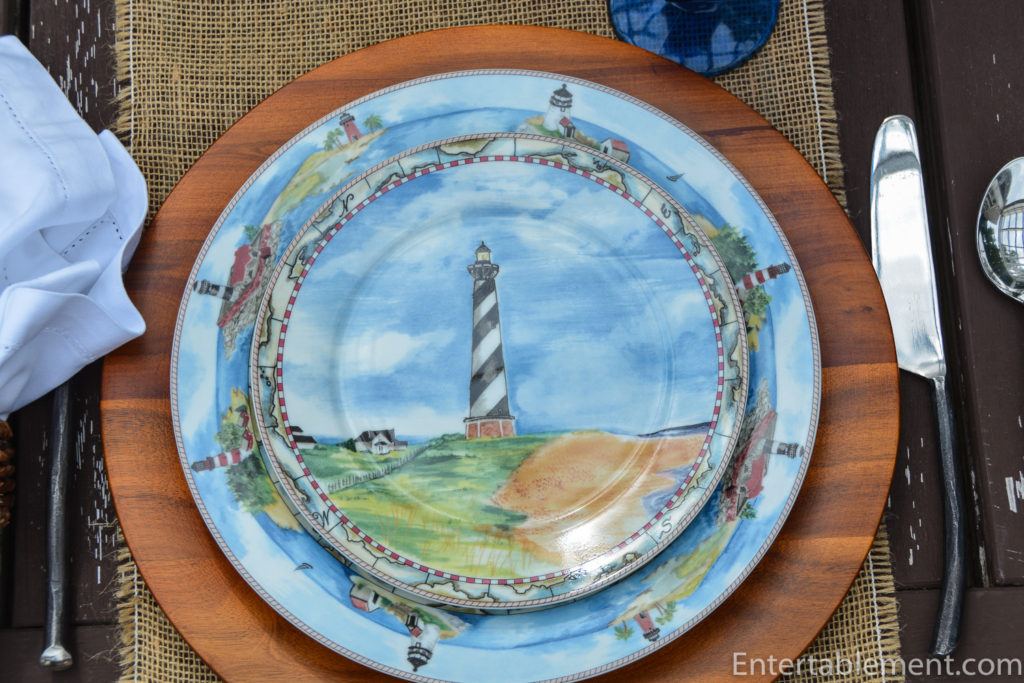 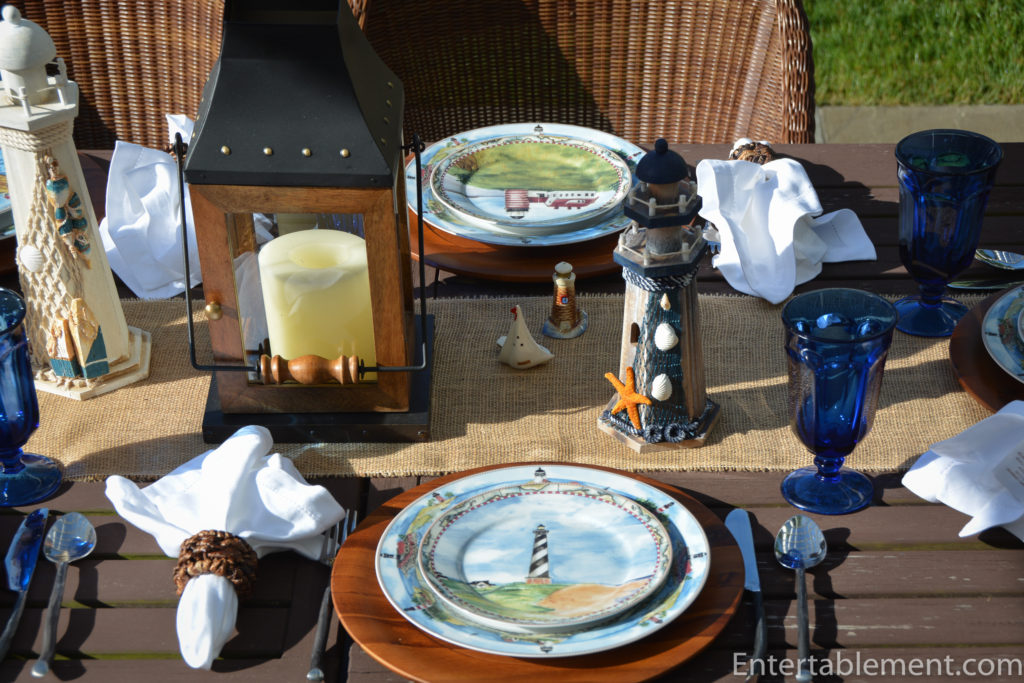 Though lighthouses have largely been decommissioned due to modern GPS technology, they remain as stark reminders of the dangers our naval forebears faced on the seas. 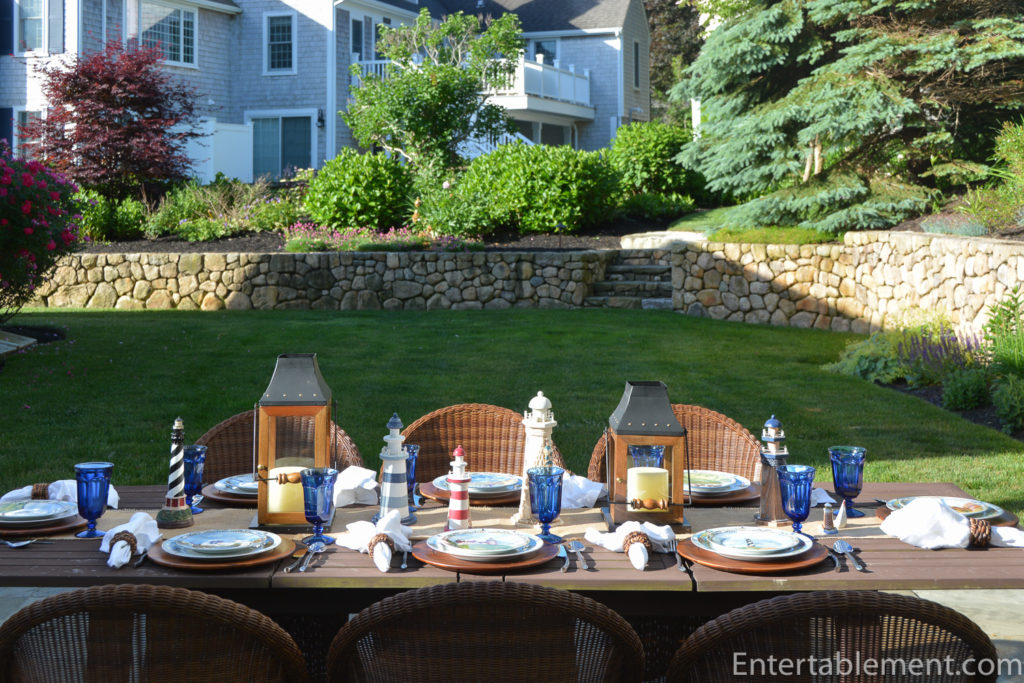 In outfitting the table, I went looking for some lighthouse accoutrement and was lucky enough to track down five wooden ones between Amazon and PartySwizzle.com. 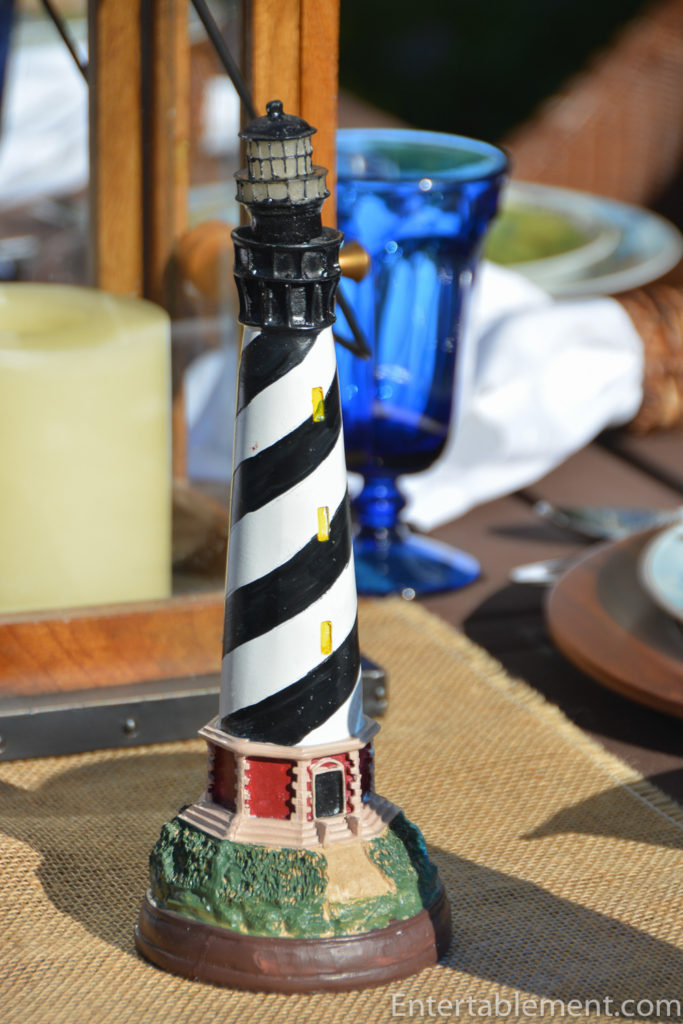 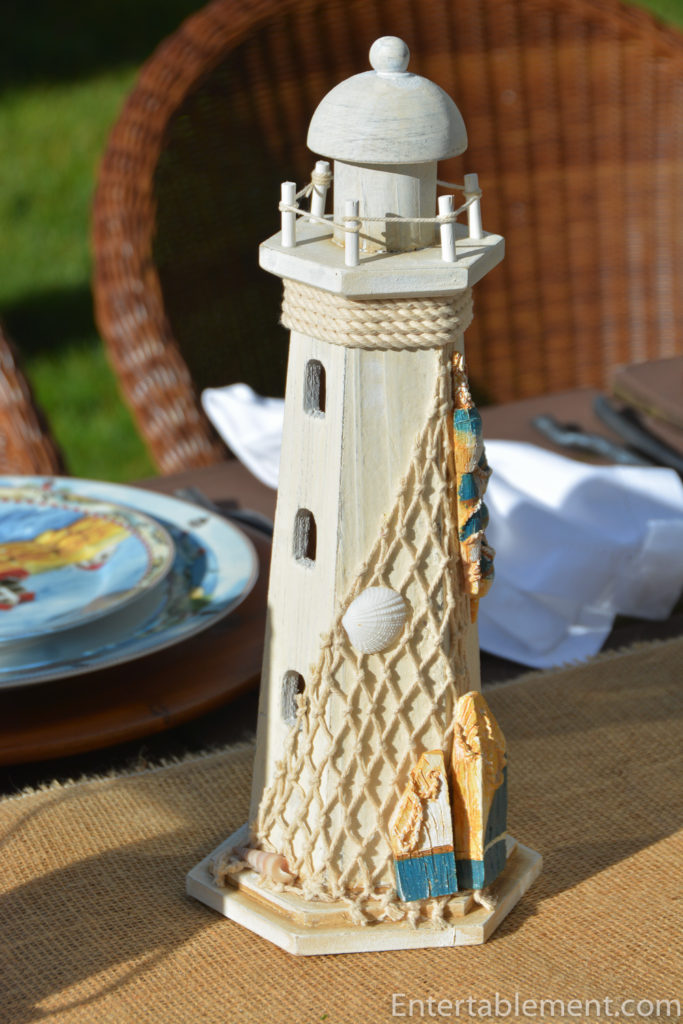 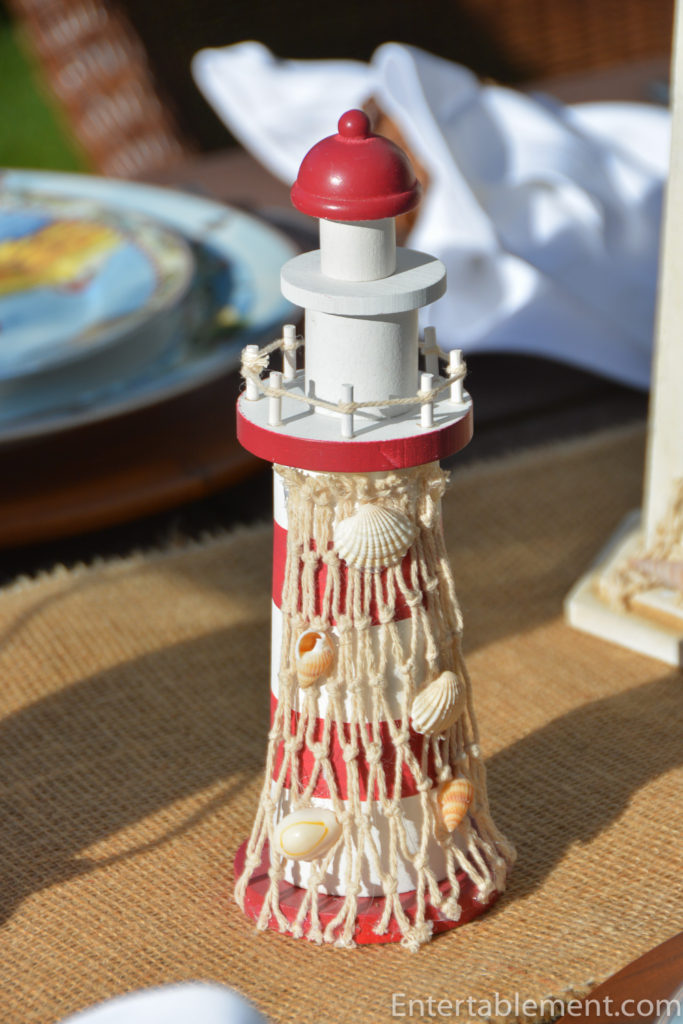 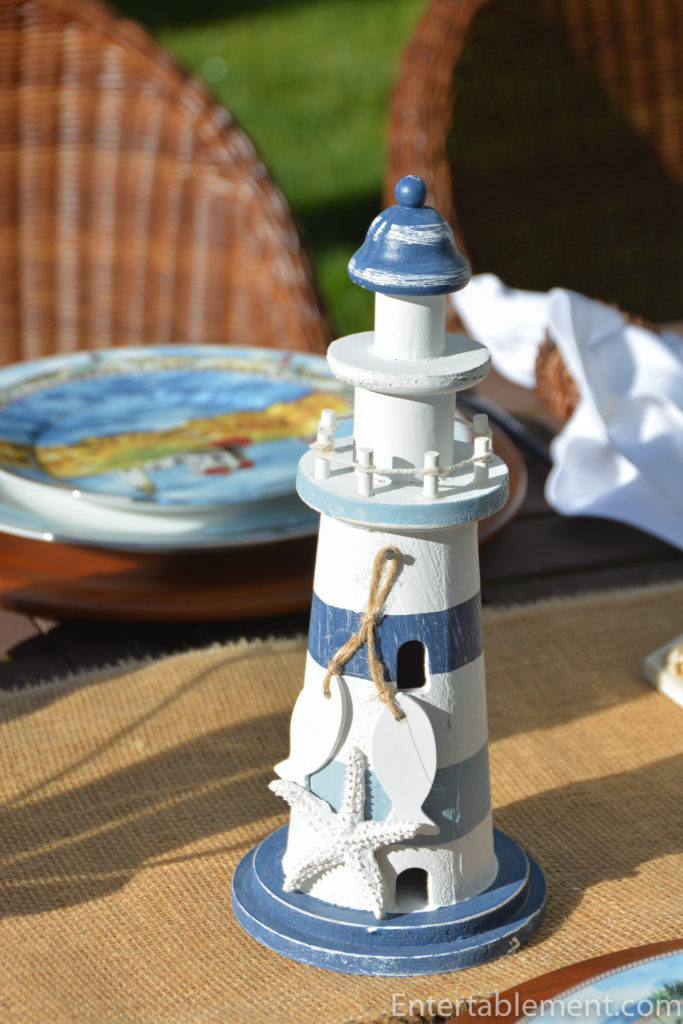 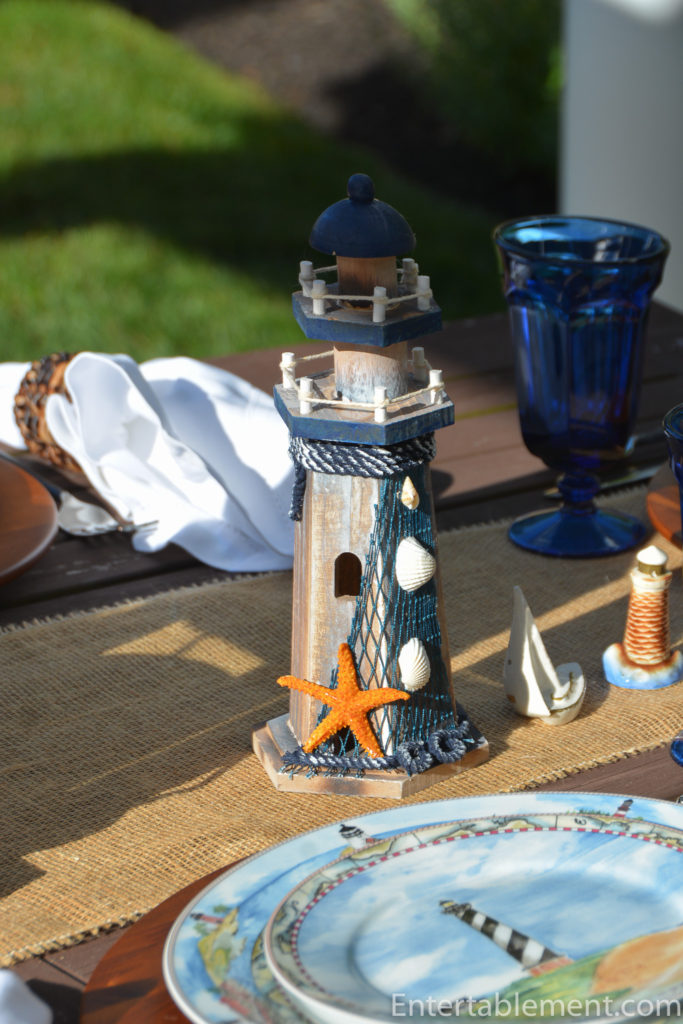 Having almost fully exhausted the lighthouse theme, I switched to a combination sailboat and small lighthouse for the salt and pepper shakers. 🙂 They were an eBay find. 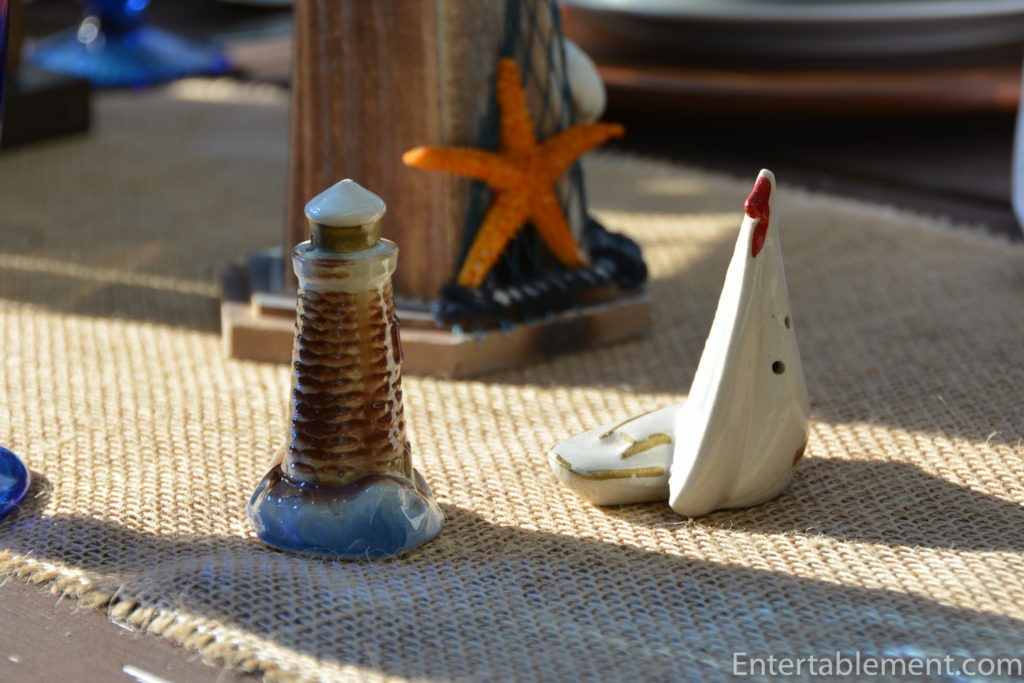 Napkin rings from World Market and Acacia Wood chargers from Amazon.com echoed the natural colours in the plates. 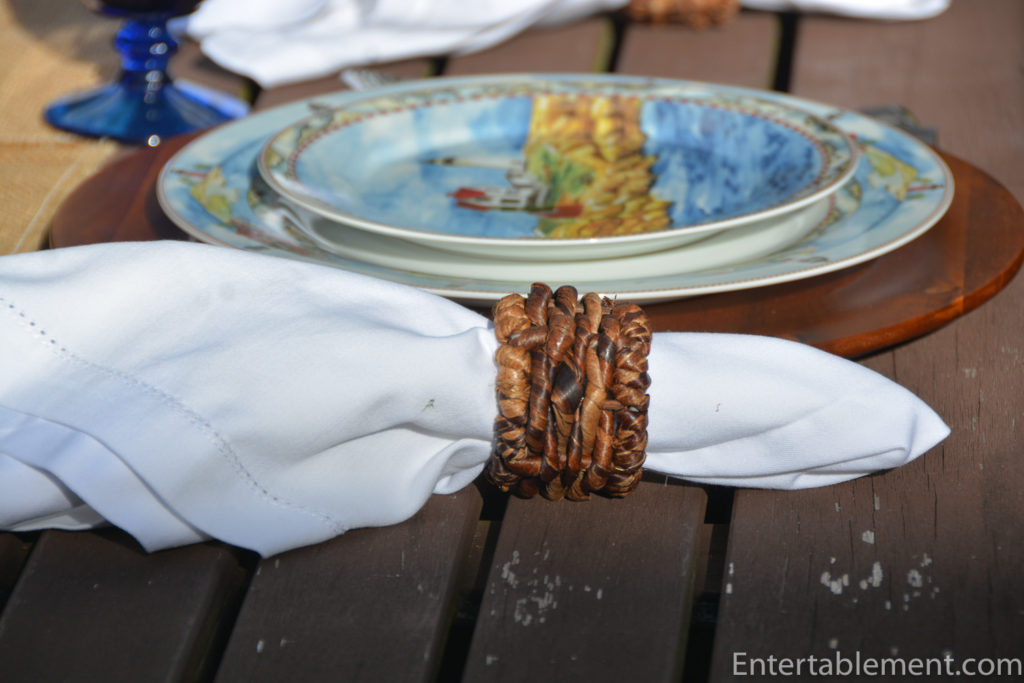 Everyone will be pleased to know that Tigger has resumed his duties as Chief Director of Table Setting. 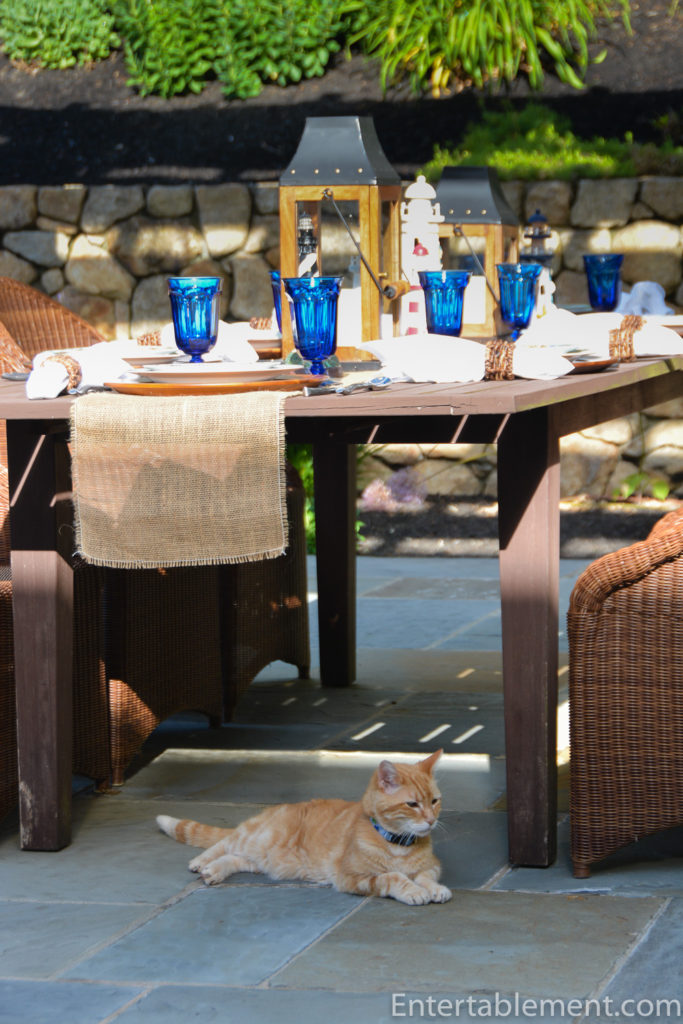 He’s in fine form after a long, lazy winter, though he doesn’t stray too far from home these days, returning quickly after short forays into the garden. At 17, he’s entitled to slow down a bit; his appetite, however, remains unimpaired. 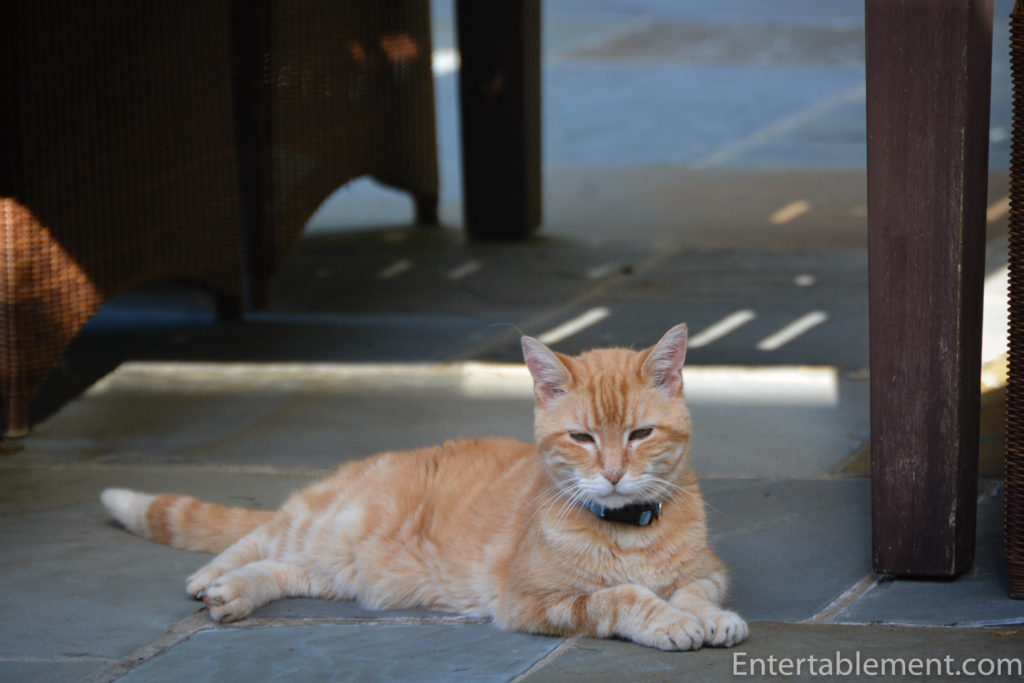 The glasses are Old Williamsburg Deep Blue Ultra iced tea glasses by Ohio Glass company, made in the 1970s. 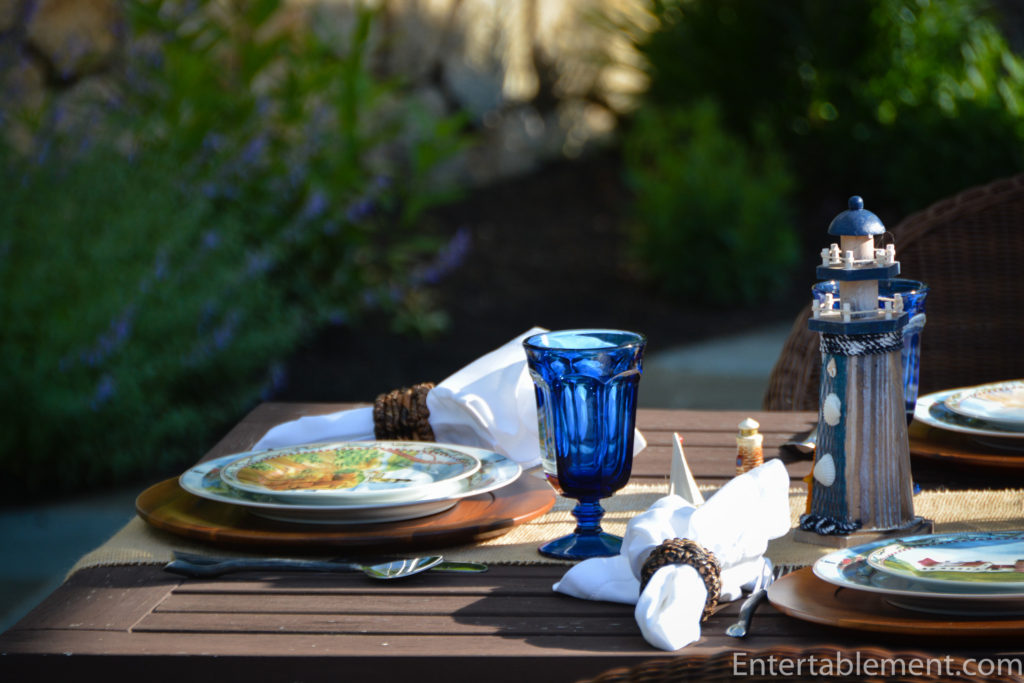 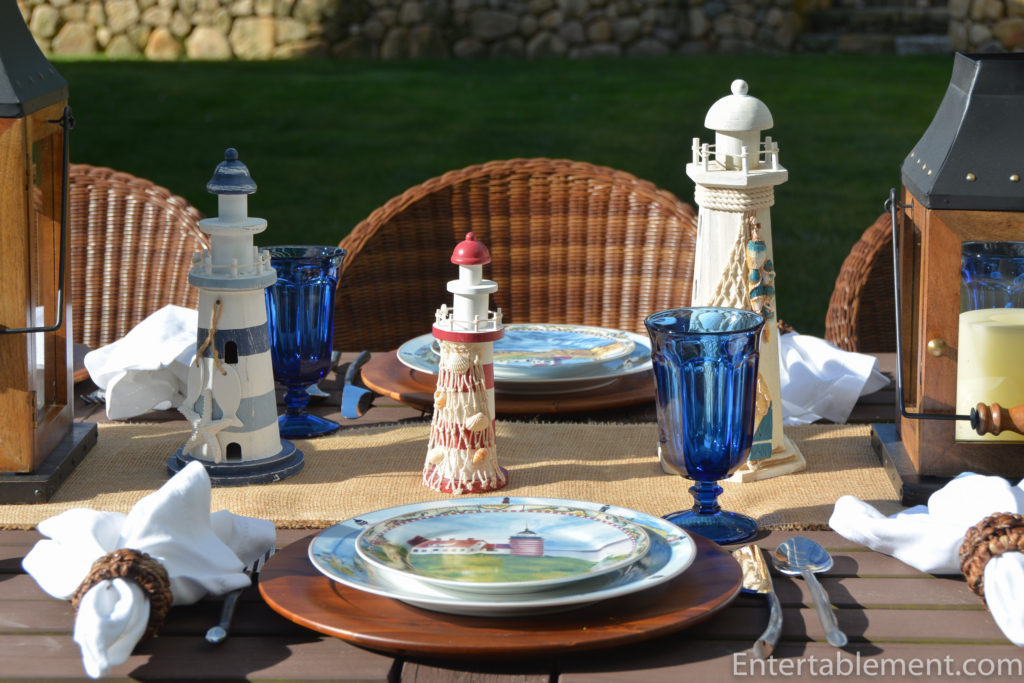 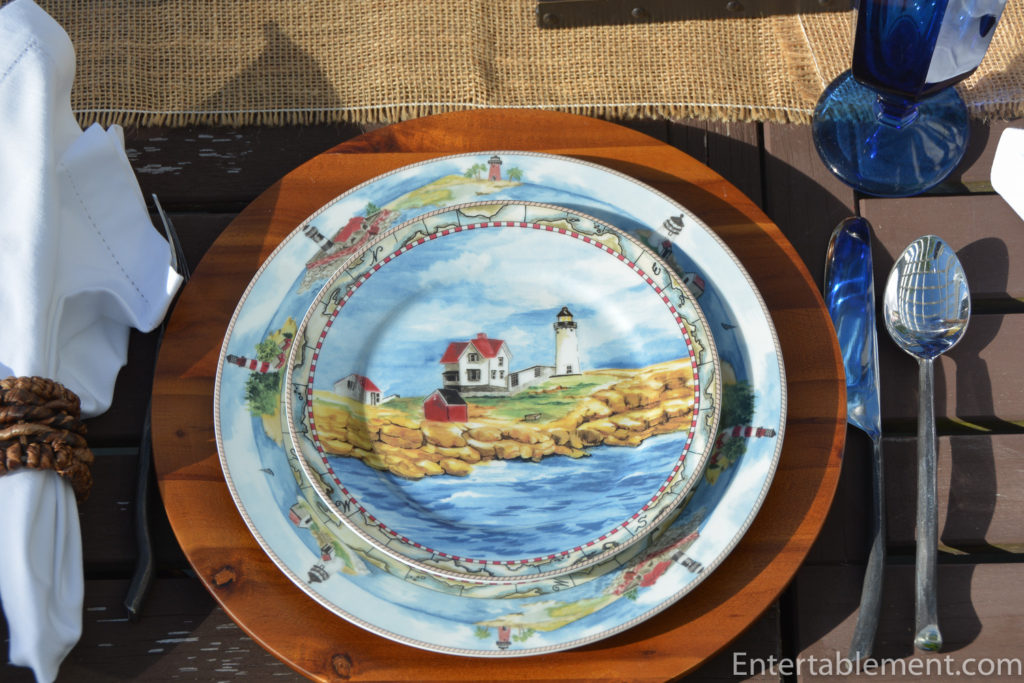 Thank you for joining me on this tour of our Seaside Nautical Table. 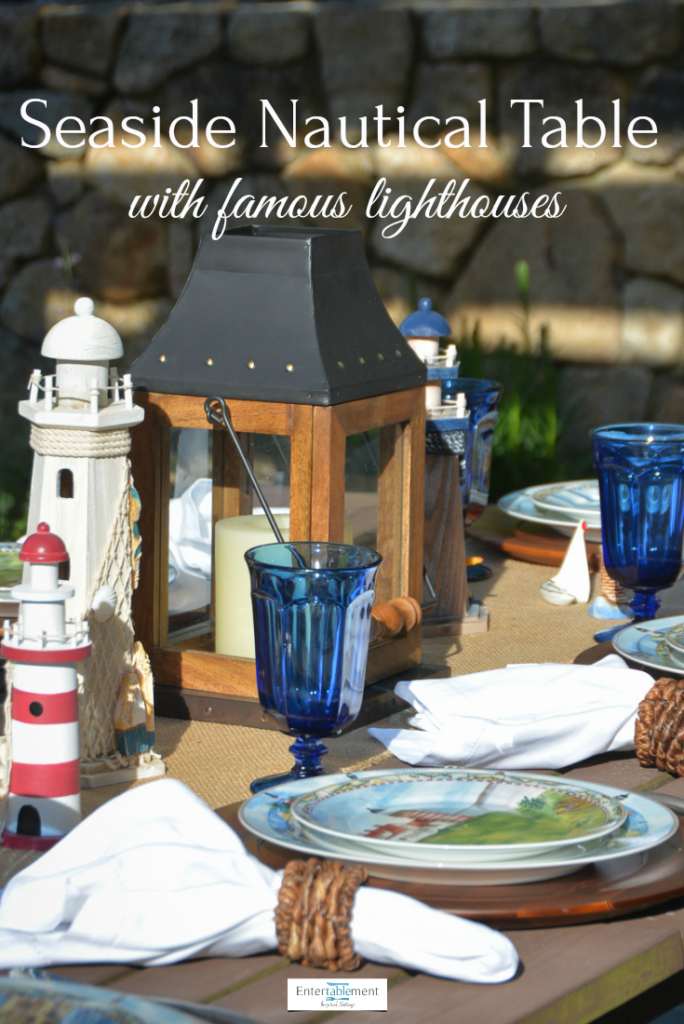