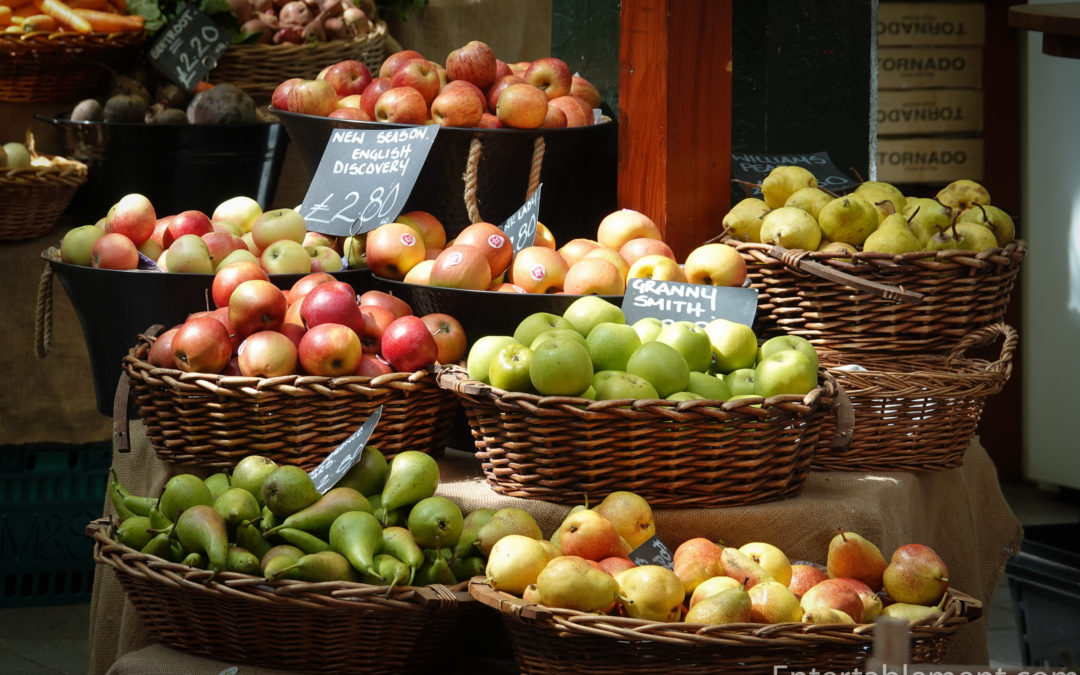 How many food markets have enjoyed their own millennial celebration? As in, one for their thousand-year history? 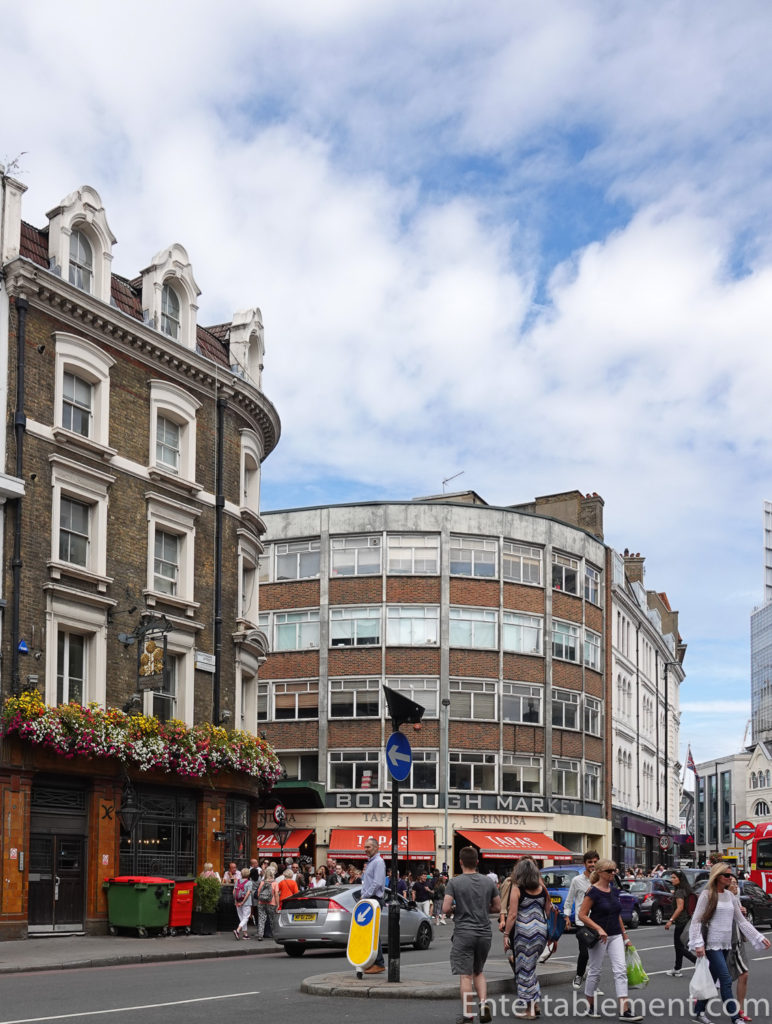 Back in the day, when the Danes were enthusiastically sacking England, the Anglo-Saxon King Ethelred the Unready still had a few tricks up his sleeve. He hired a bunch of Viking mercenaries of his own, including an ultra-violent fellow called Olaf Haraldsson (who later became king of Norway). Apparently Olaf, in a stroke of genius, slung strong cables around the legs of London Bridge and used the force of the Thames’ current to pull it down—a decisive moment in Ethelred’s victorious campaign. As told in the Heimskringla by Snorri Sturluson, one of the greats of medieval Scandinavian literature:

“First they made their way to London, and so up into the Thames, but the Danes held the city. On the other side of the river is a great market town called Southwark…”

That, folks, was in 1014. Hence the 1,000-year history of Borough Market. London Bridge may have fallen down, but the people ate well. 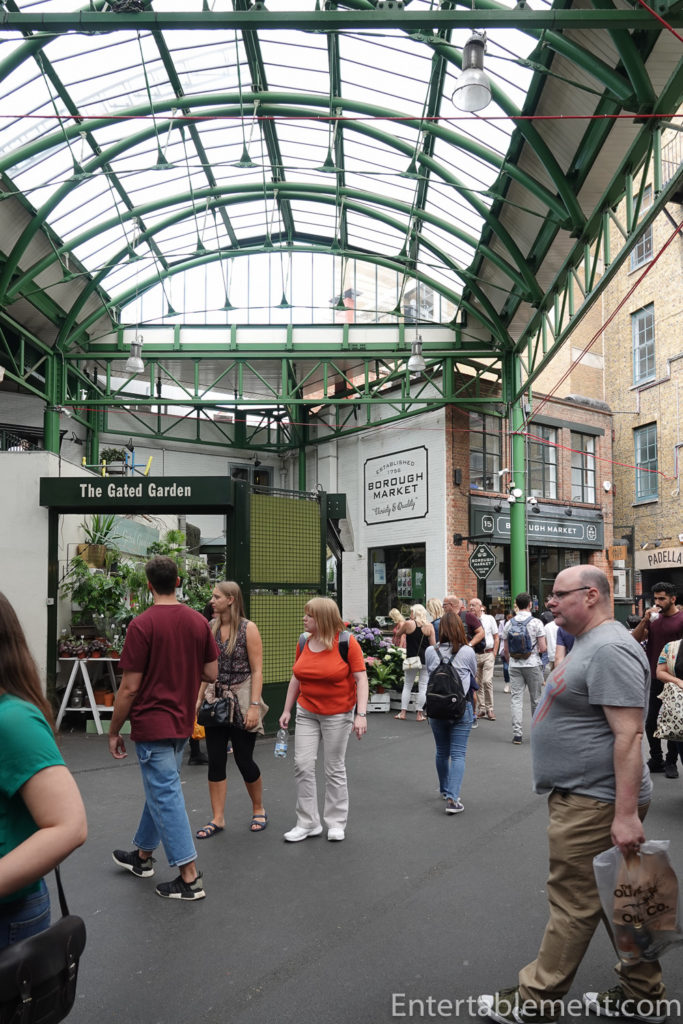 Borough Market continues to be a true paradise for foodies. It offers a breathtaking array of produce, cheeses, meats, baked goods and speciality comestibles, as well as cooked food for takeaway or on-the-spot consumption. 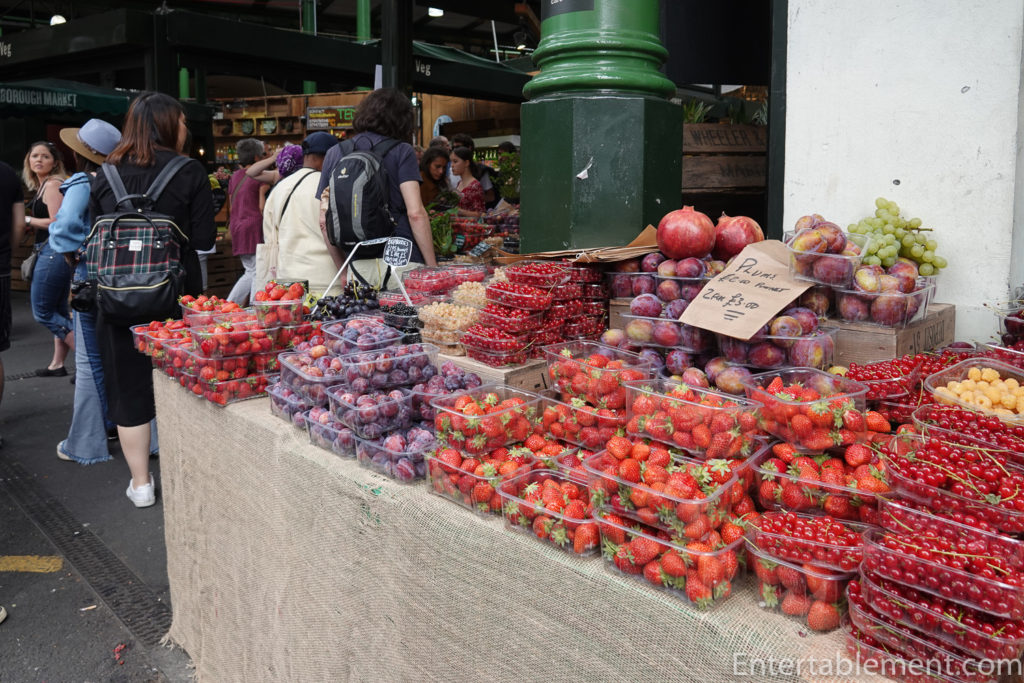 The mushroom display stopped me in my tracks all by itself. 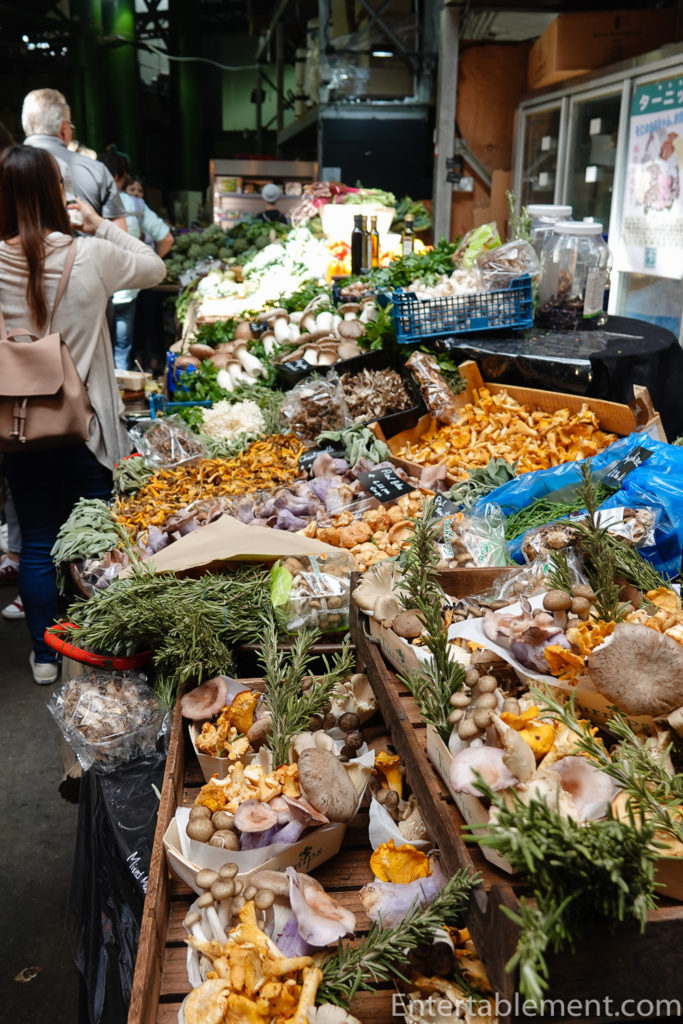 A delectable assortment of wild mushrooms with a sprig or two of rosemary, all nestled in their own wooden boxes for convenient transport. We are staying in a hotel, not a self-catering place, or they would have made their way home with us. 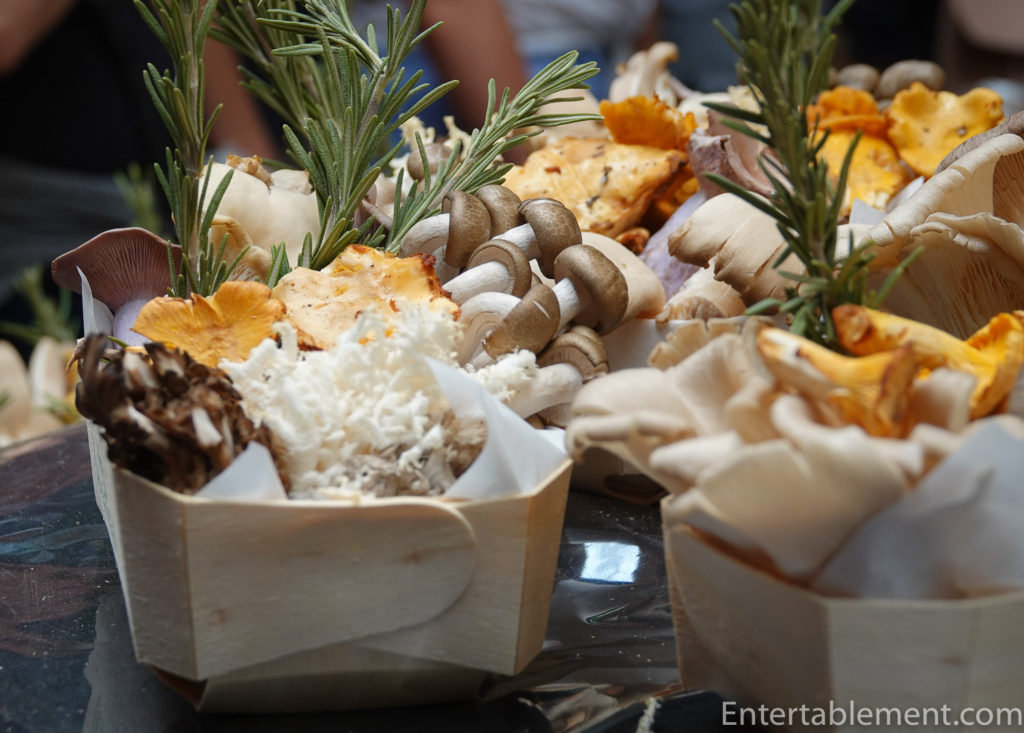 Nearby, an attendant stirred a giant sizzling pan of chopped mushrooms, browning them thoroughly before adding them to a risotto. Heavenly. 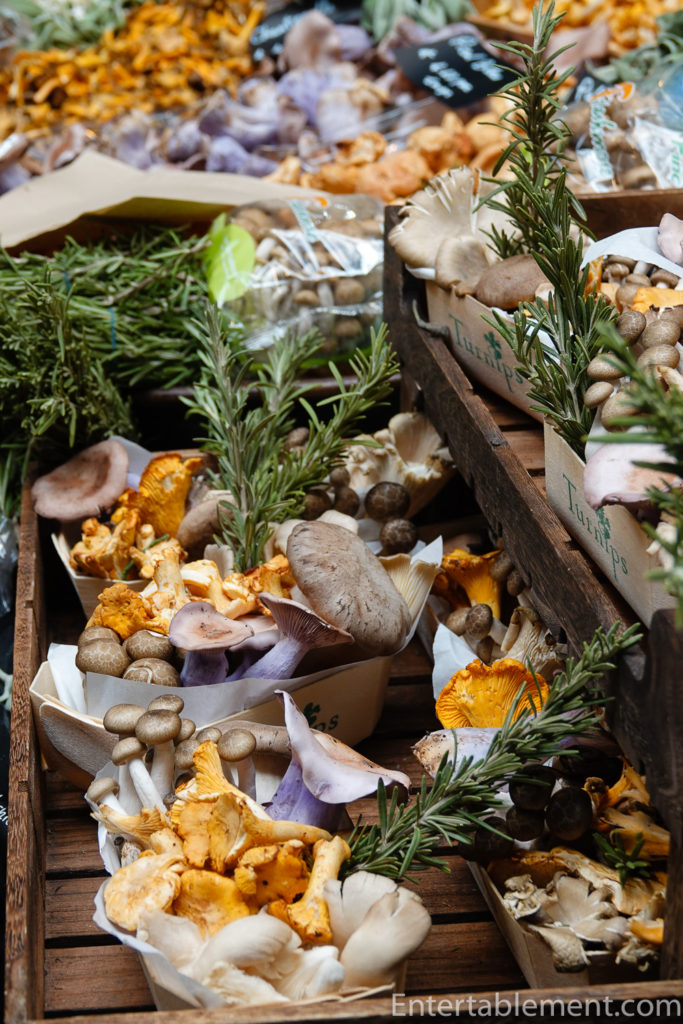 A shop specializing in all things canard was just down the way. 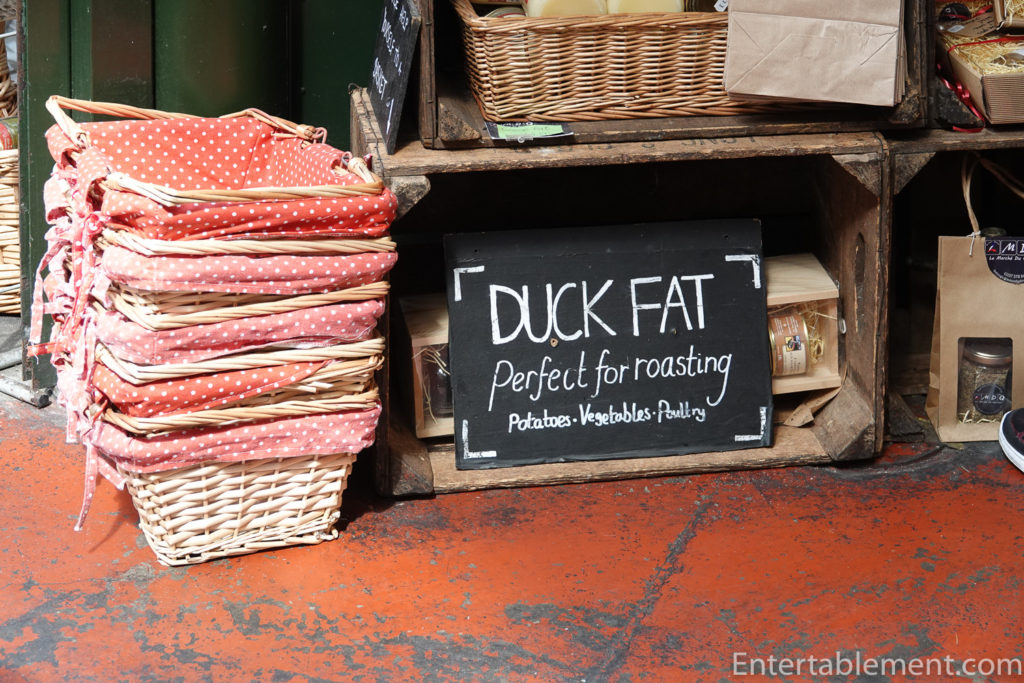 Note to readers: on this trip to England, we’ve got some of the kids and grandkids along, so Glenn has several partners in crime while I ply the camera. The competitive camera-ing may heat up again in a few days when we make our way to Kent… 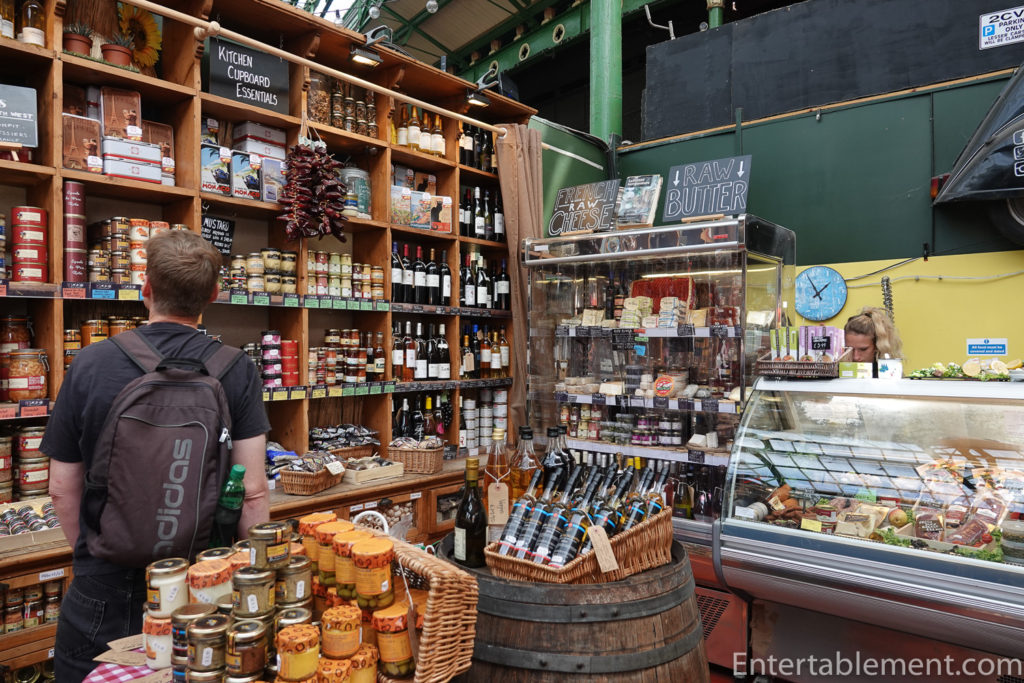 Lauren and Glenn went off in search of a paella, so I joined the line for Duck Confit on a Bun and was offered samples of sangria, white and red, while I waited. I settled on the white, with chunks of peaches floating in the icy beverage. Perfect with the hot, salty duck. 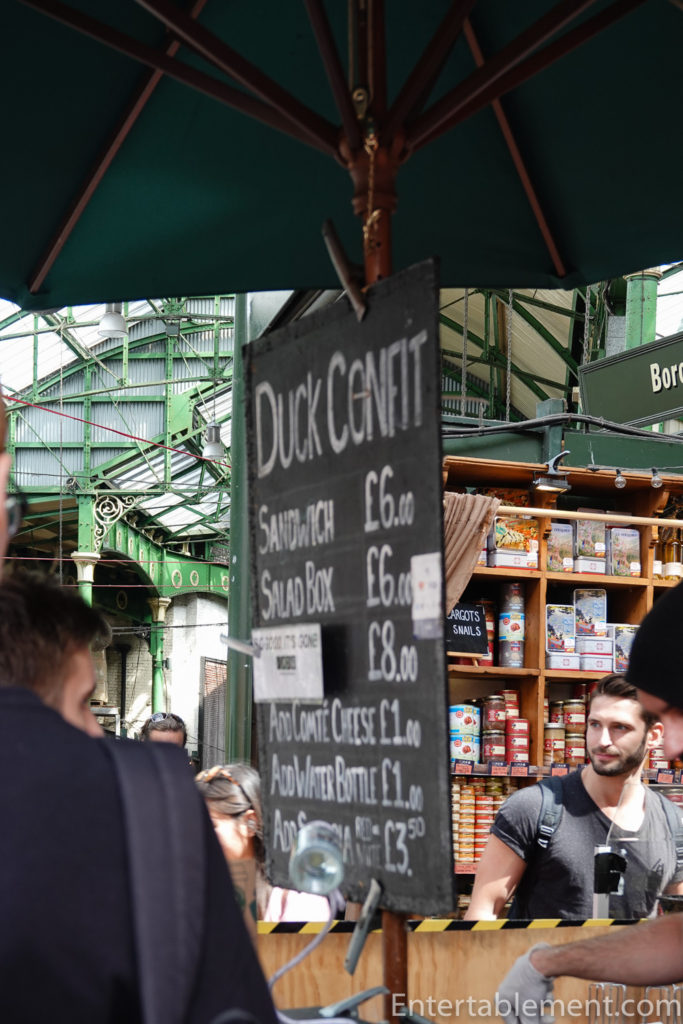 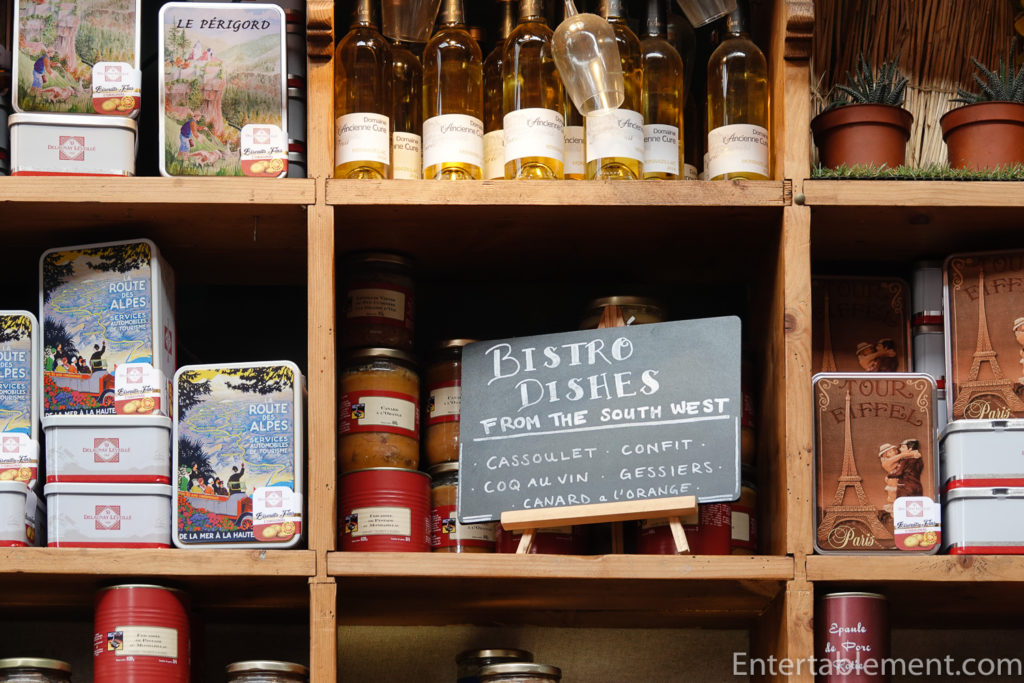 With typical French directness, this part of the market unabashedly celebrates on-the-hoof (or webbed-foot) protein. 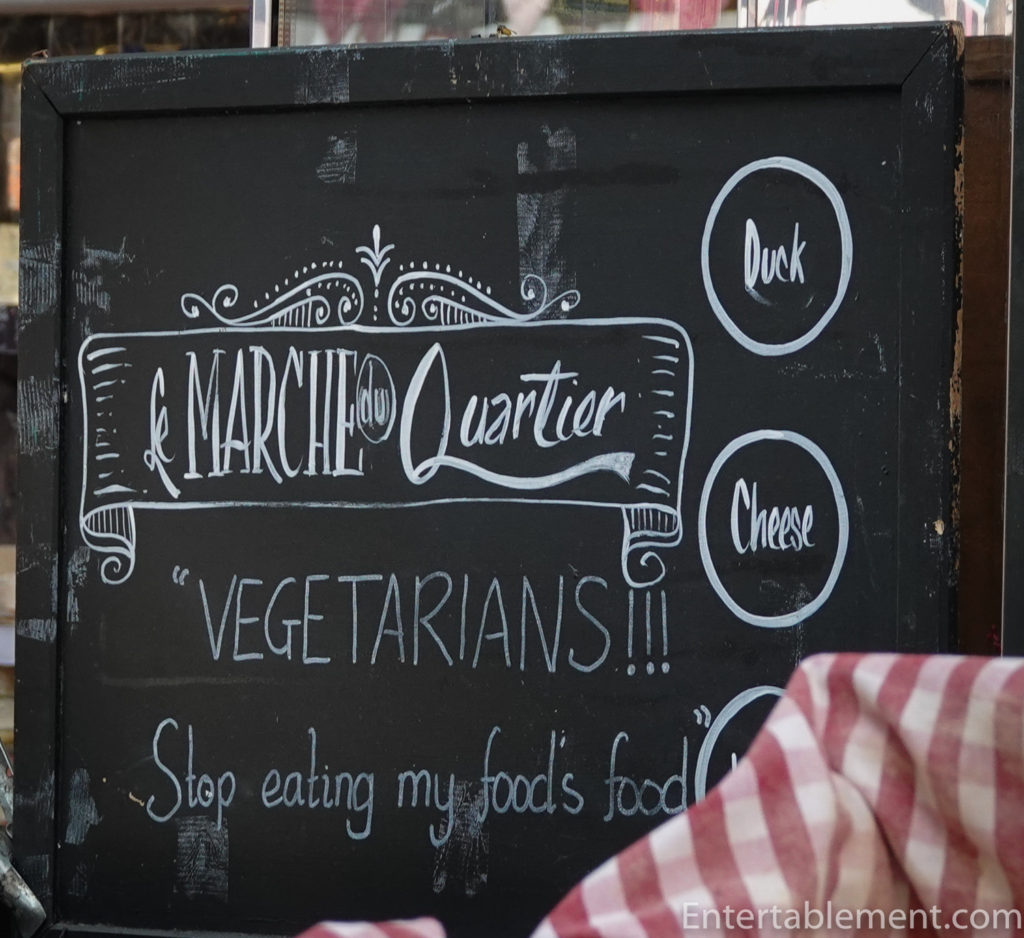 Rejoined by Glenn and Lauren, we found a place to perch to consume our paella and duck confit. Crowded and jostled, we nonetheless enjoyed every bite.

The large structure that encloses the market has high ceilings and abundant windows, adding lots of light and providing an airy feeling, despite the crowds. 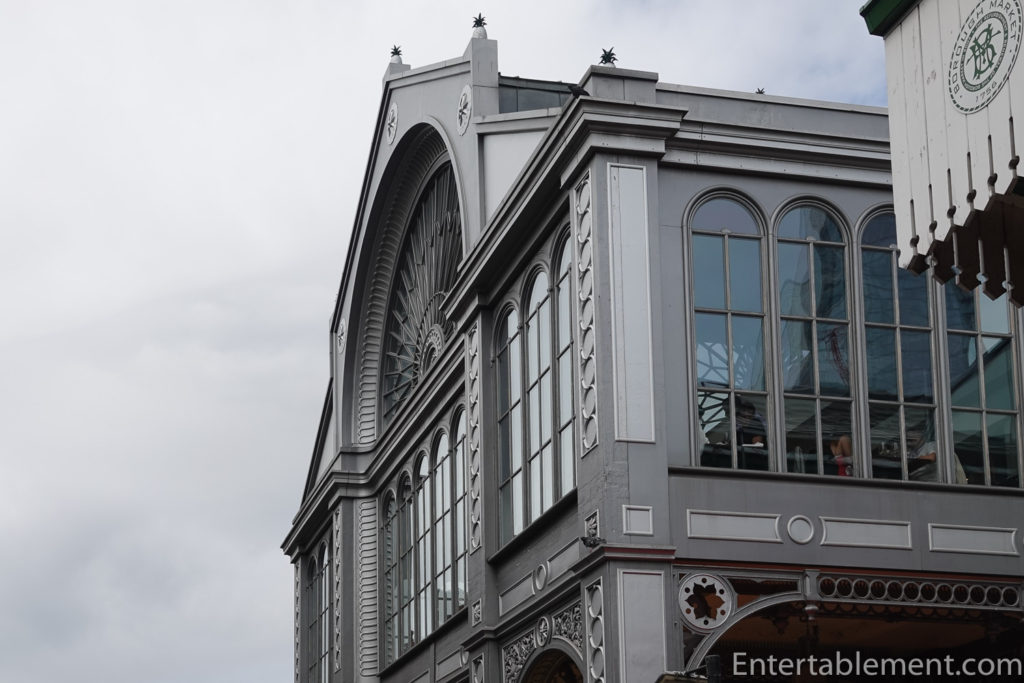 The market is open six days a week, and the online reviews offer lots of grumbling about a recent decision to close the market at 5 pm during the week. I gather office workers find this to be quite irksome, as they were accustomed to stopping by on the way home to pick up their evening meal. We visited the market on a Saturday and it was particularly crowded. 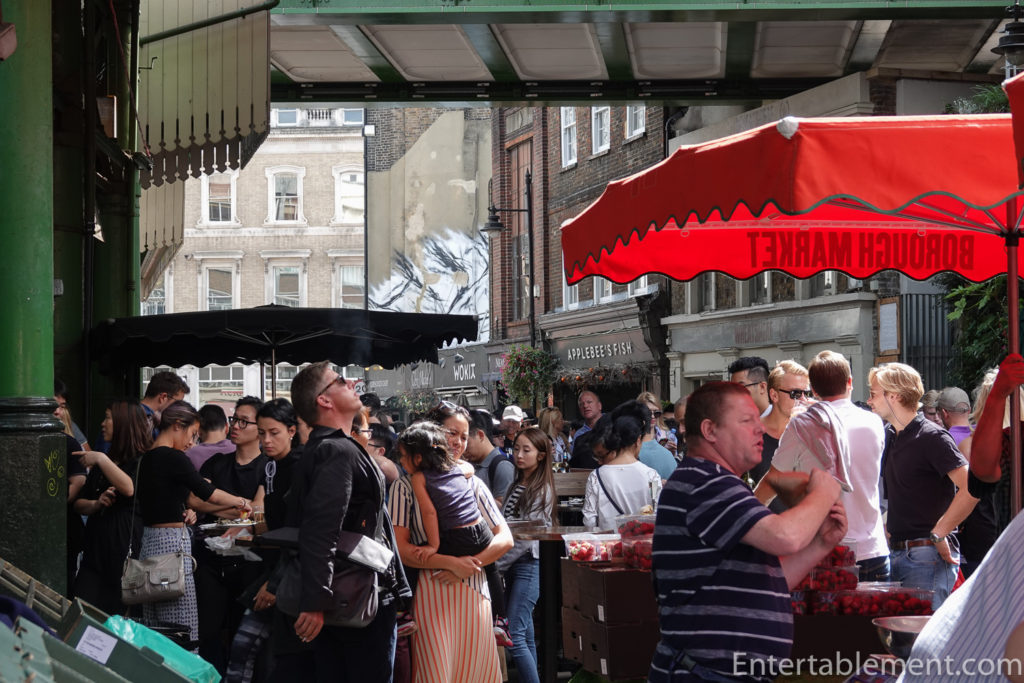 Inconvenient opening hours notwithstanding, the produce is spectacular. My next stop was Southwark Cathedral, and I didn’t think traipsing through with bags of fresh apples and pears would be looked upon favourably. It took a lot of effort to restrain myself, though. 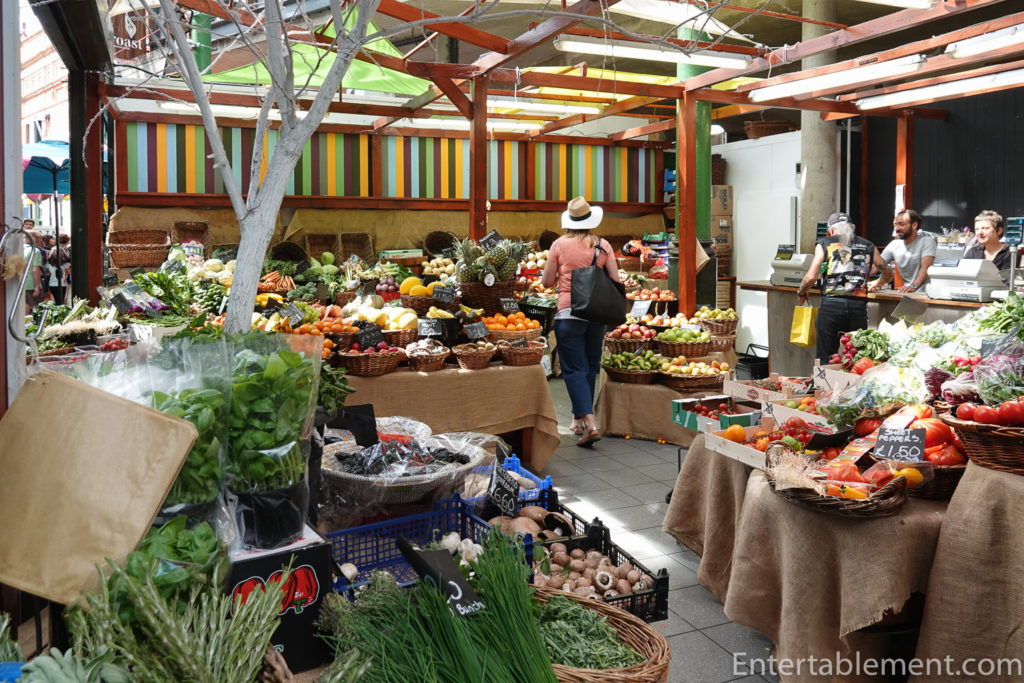 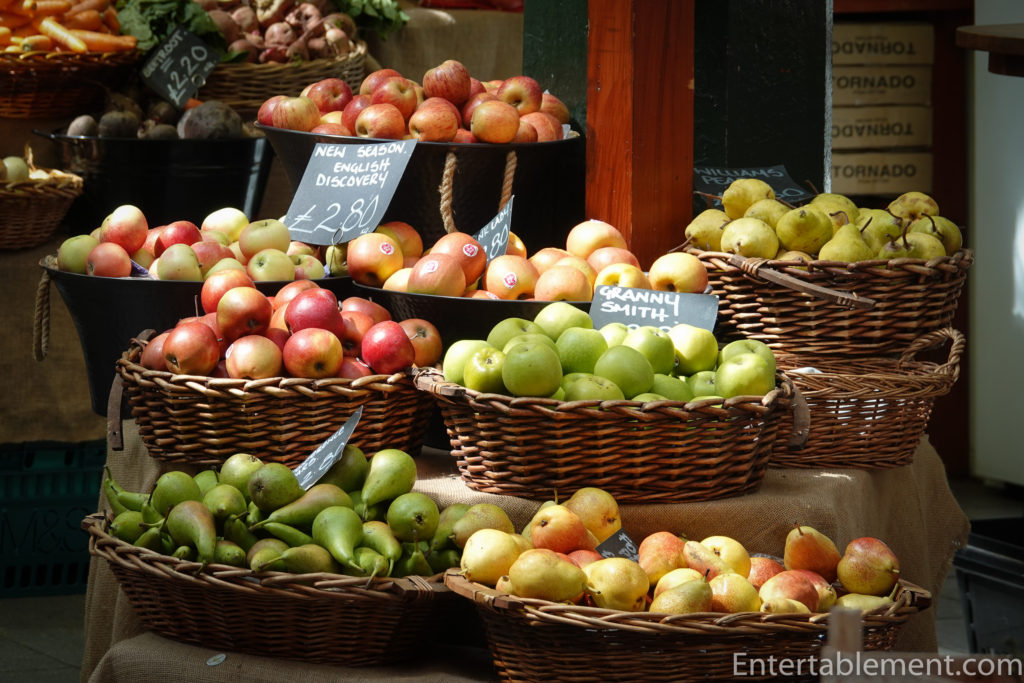 A final look round and we were on our way. Hmm, perhaps a bottle of wine to go? No, better not. 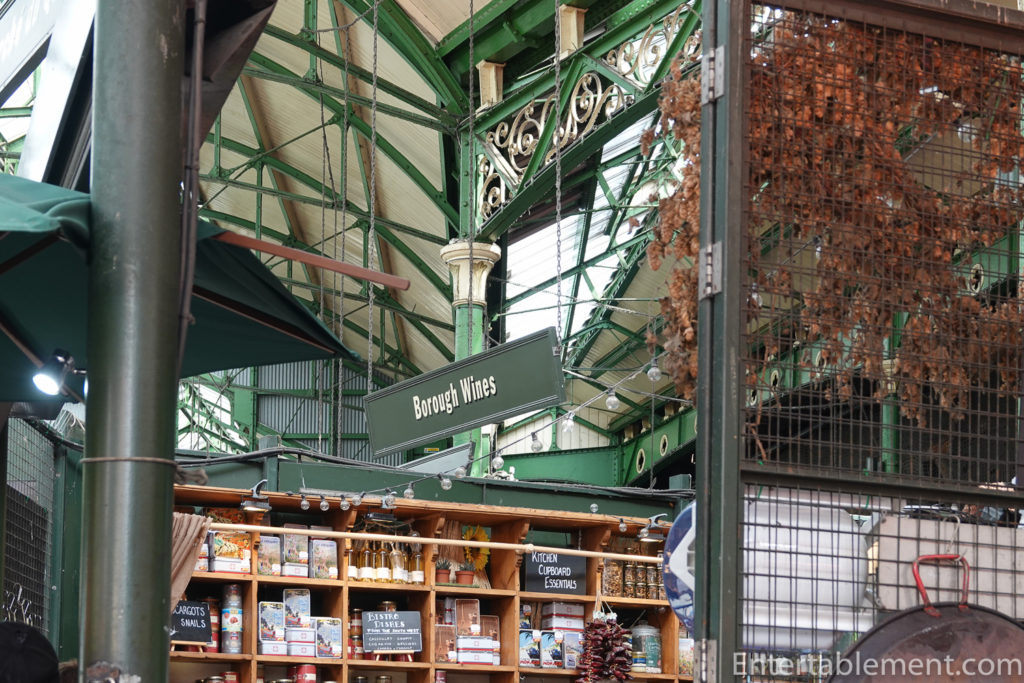 We exited the market and went off in search of Southwark Cathedral. My erstwhile companions were delighted to discover The Mudlark, right beside the Cathedral. So they went to refresh their palates while I did my Cathedral-thing. 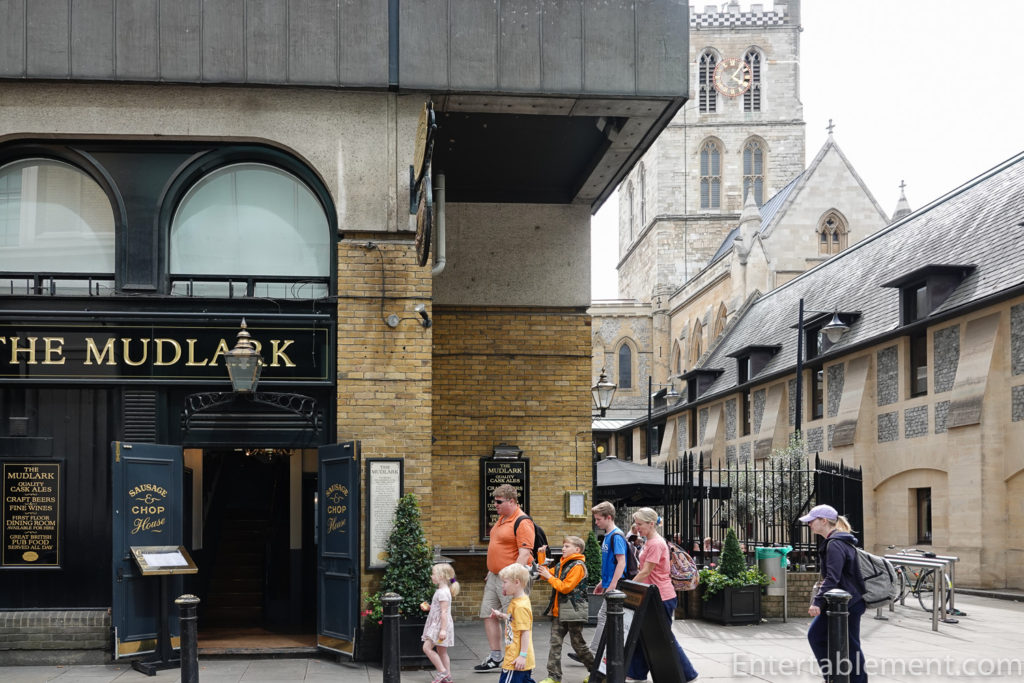 We’re off to the Tower of London this morning; the grandkids are beside themselves with excitement. 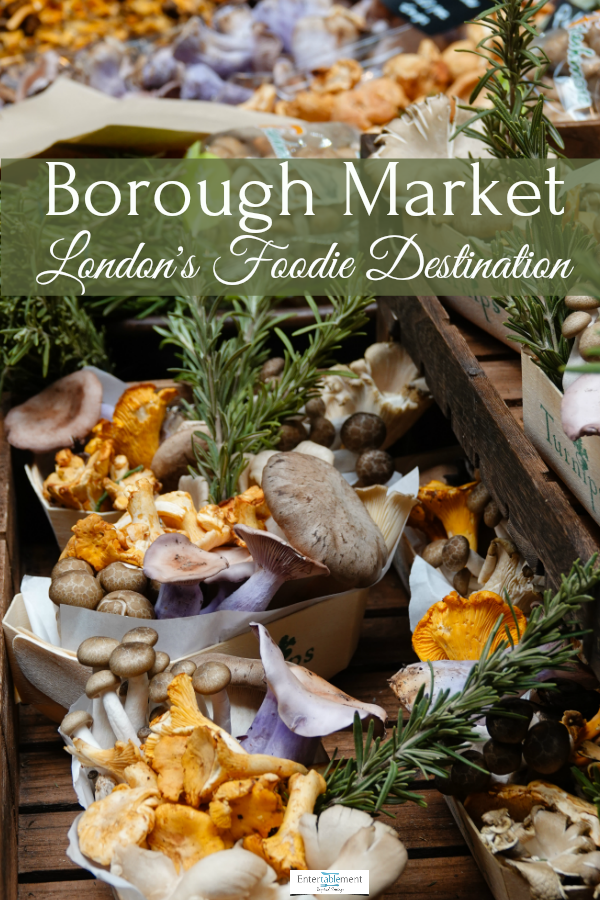