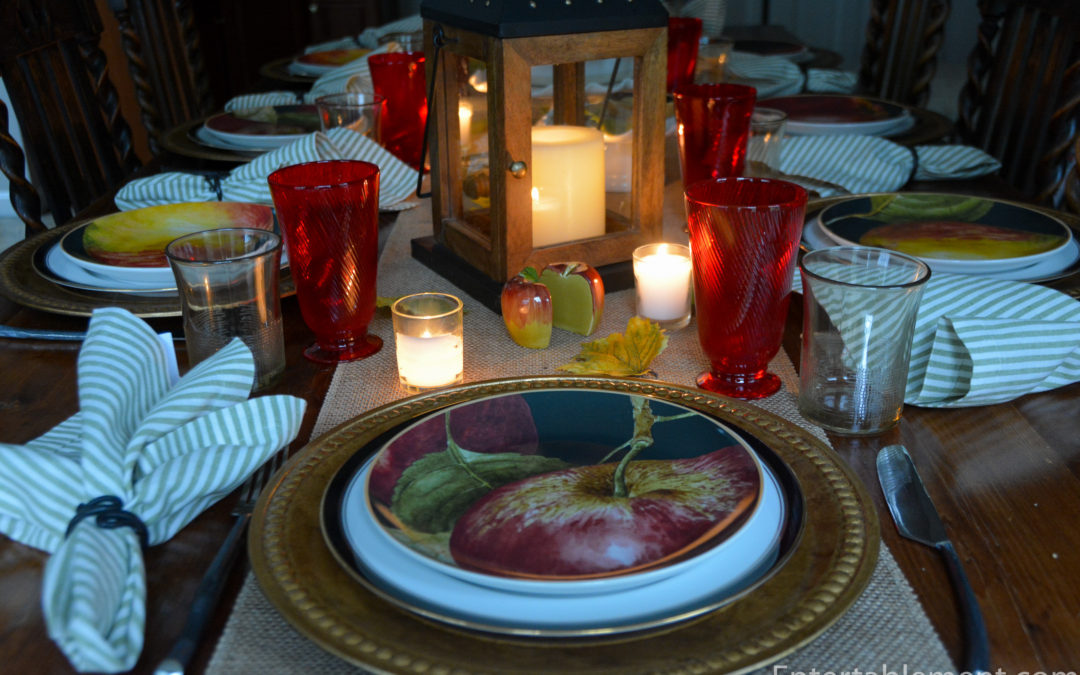 We purchased Braeburns at our local apple orchard this past week. They’re the last of the heirloom varieties to be picked, so that’s it for apple season. Finito! 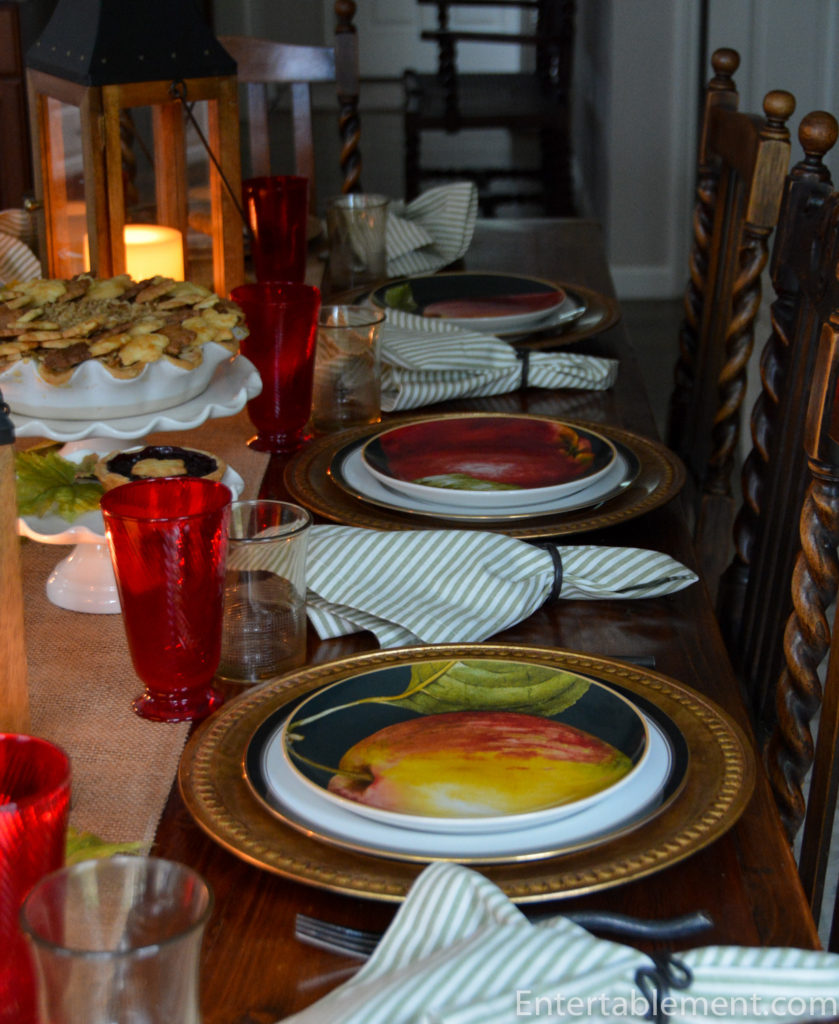 Clearly, the solution to any sadness that might invoke is an apple pie! It was also Glenn’s birthday yesterday, so we indulged in a “Black and Appleberry Pie”,  a slightly modified version of the Apple Pie with Oatmeal-Almond Crumble I baked while we were in the Cape. 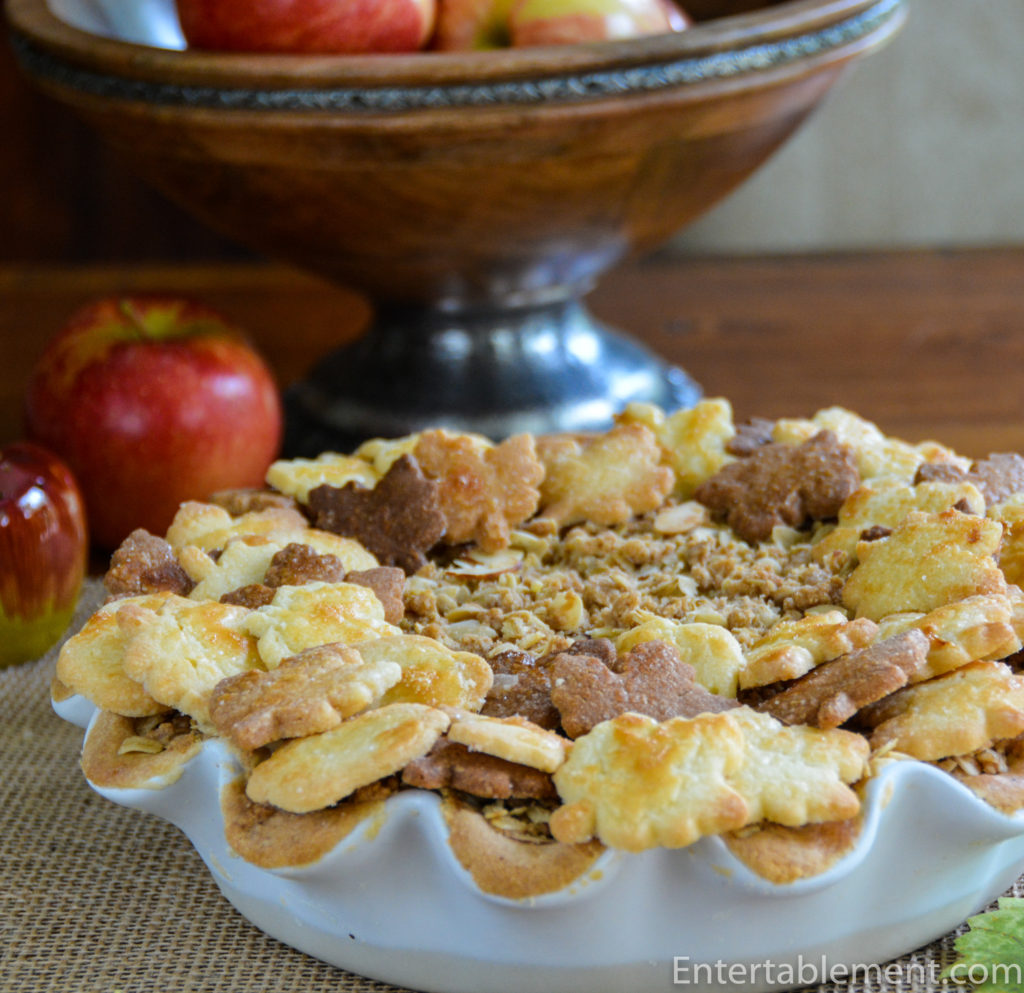 Apple plates help extend the season, too! With the black background and rich colours reminiscent of a Dutch Masters painting, this set of salad plates sets the mood for a warm, candlelit dinner. 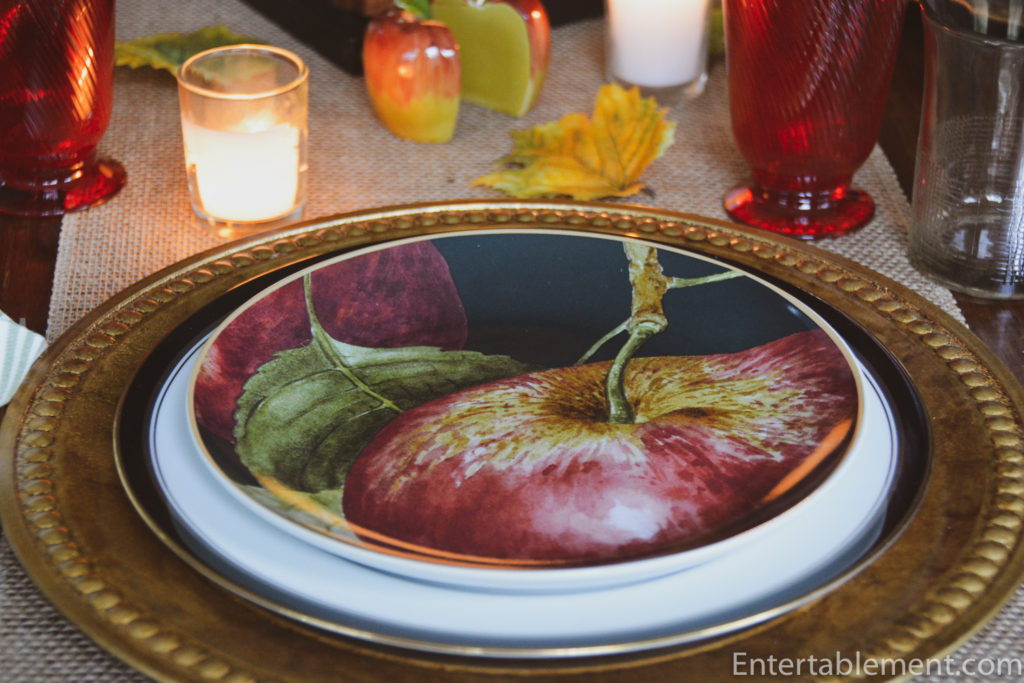 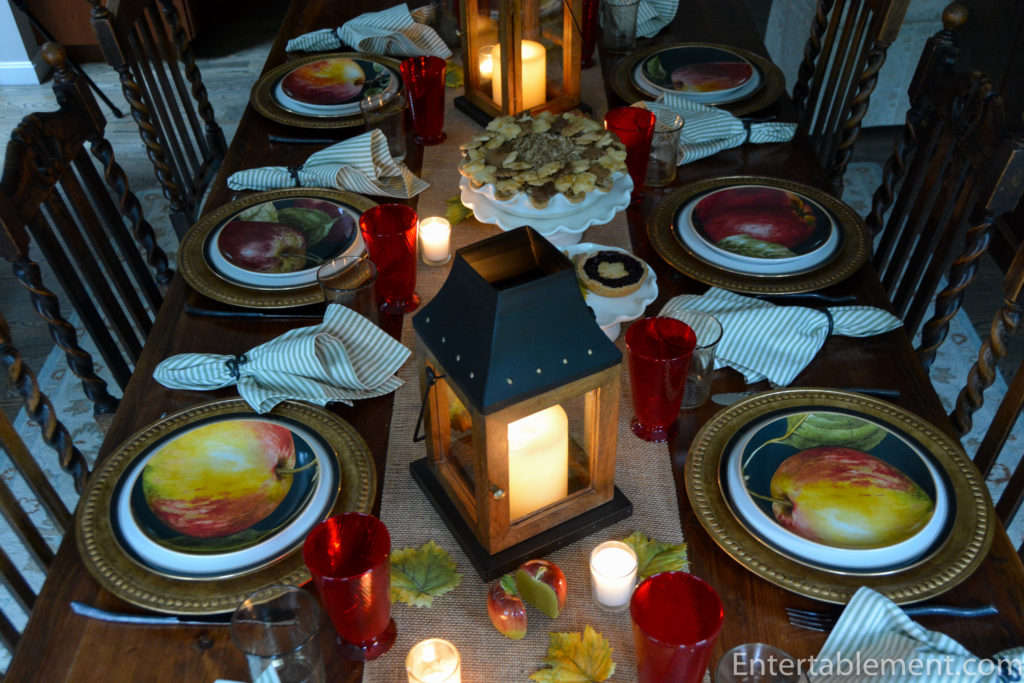 Taking the cue from the black background and gold rim on the apple plates, I set a base with gilded chargers and black-rimmed rimmed dinner plates, Nocturne by Royal Prestige. Both the salad plates and dinner plates were eBay finds. The chargers came from Pottery Barn aeons ago. 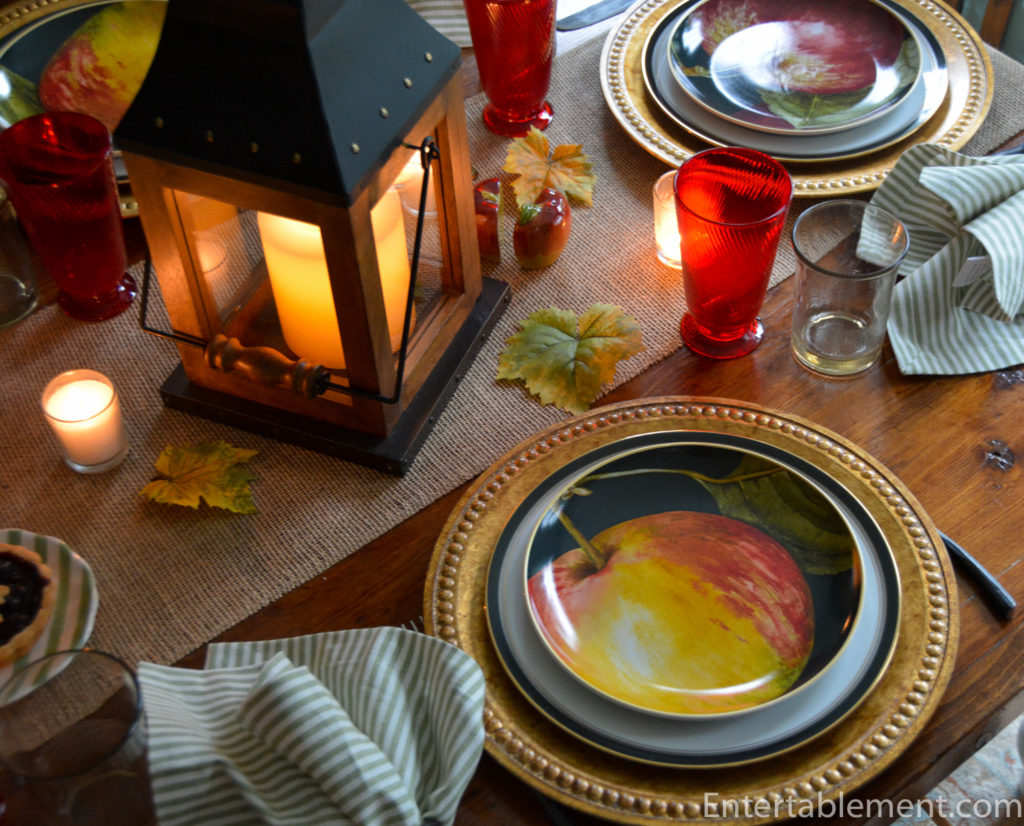 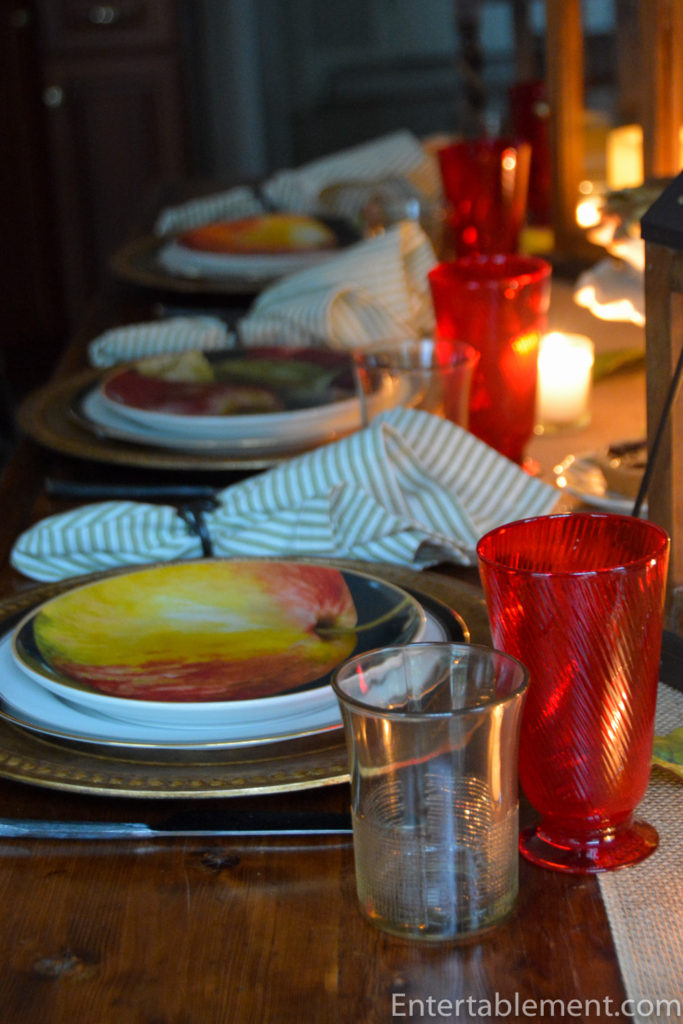 The glasses are a relatively recent purchase. One of our readers tipped me off to a marvellous sale at Juliska a few months ago, and I indulged in these Ruby Arabella Highball glasses. They’re being discontinued, and the sale is still going on if anyone is interested in stocking up for the winter season. Won’t these work well for Christmas tables? The small gold tumbler is an online item from Pier 1, the Yute tumbler, which reminded me forcibly of the scene in My Cousin Vinny with Joe Pesci and Fred Gwynne, “What is a Yute?” 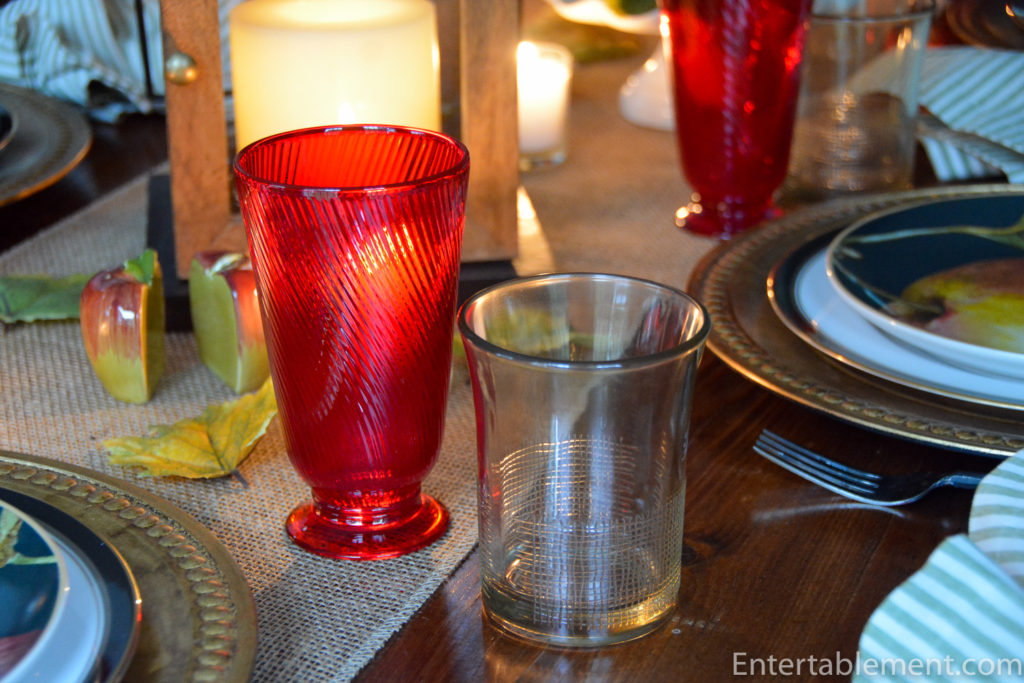 But back to the table! 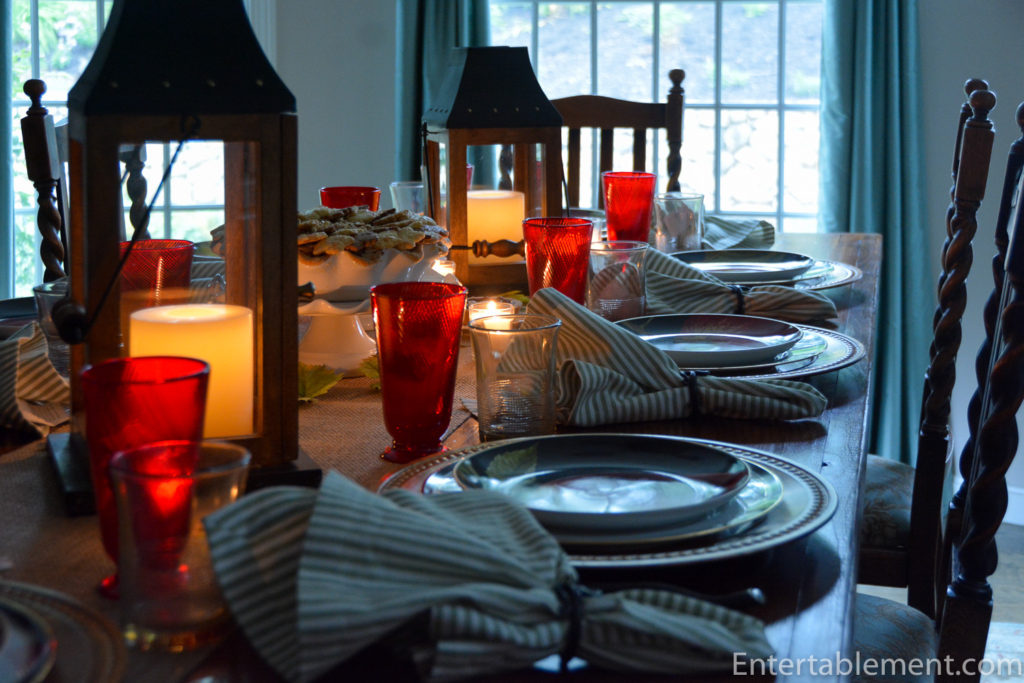 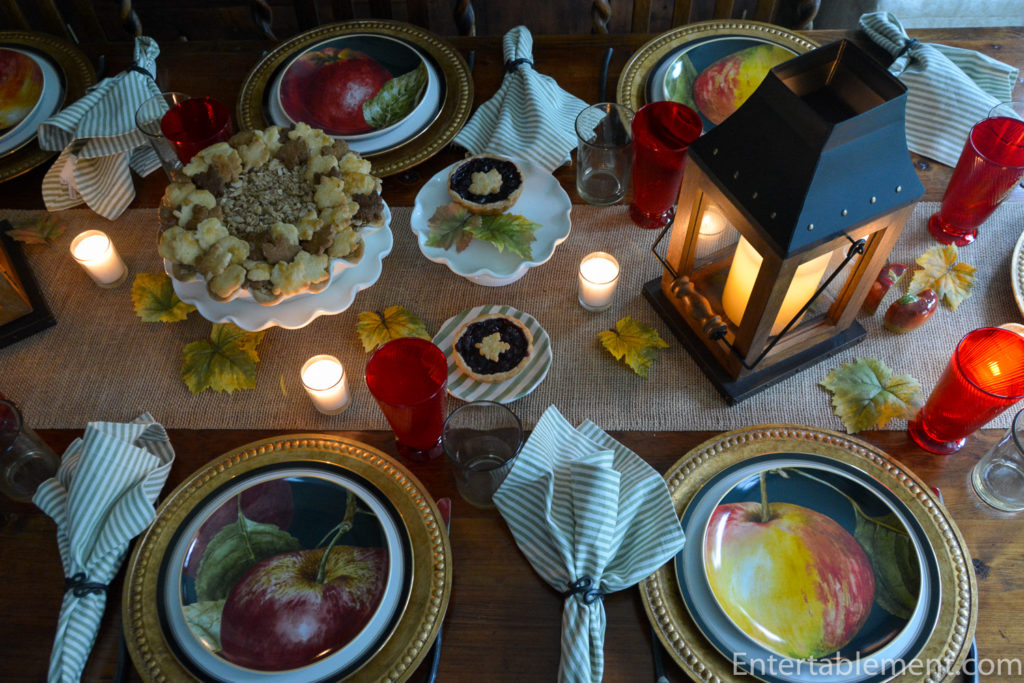 Four different apples grace the plates, two primarily red and two with more yellow tones. The quality of the artist’s renditions is really outstanding, particularly the veining of the leaves and the slight tension you can sense from the taut stem. 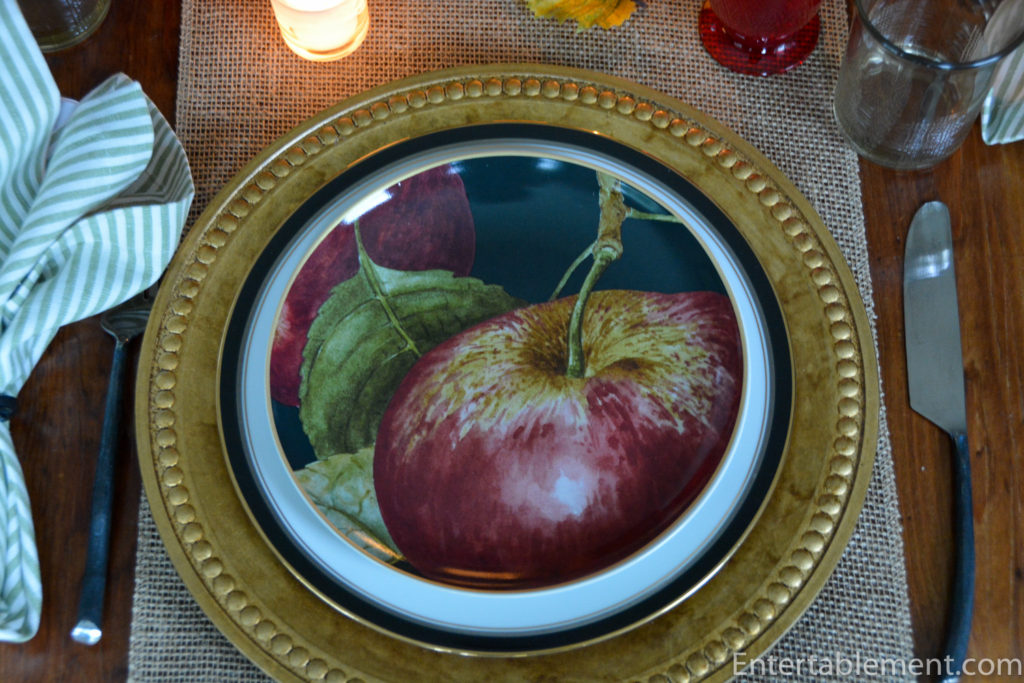 I’m sure an apple specialist could tell us more about the particular varieties, but these look like the kind of wild apples we would have found growing on farmers’ trees when I was a kid. 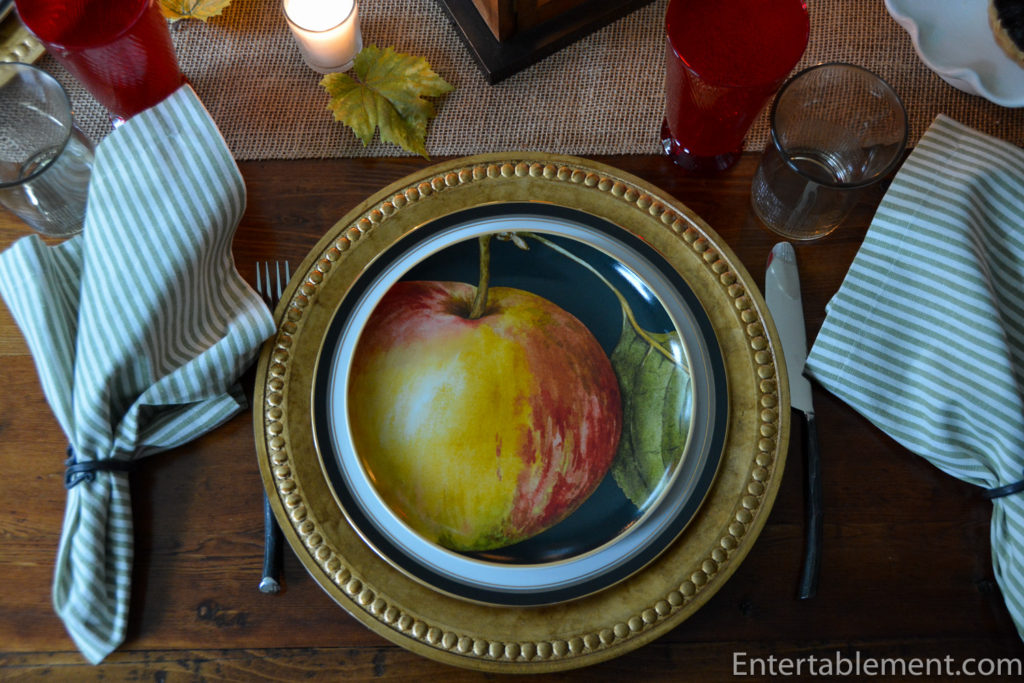 The yellow ones are really similar. In both cases, the apple is aligned to the left of the plate with a green leaf on the right. The only distinguishing aspect is the size of the leaf. I don’t seem to have a shot of the second one on its own, but you can see the difference in the photo below. 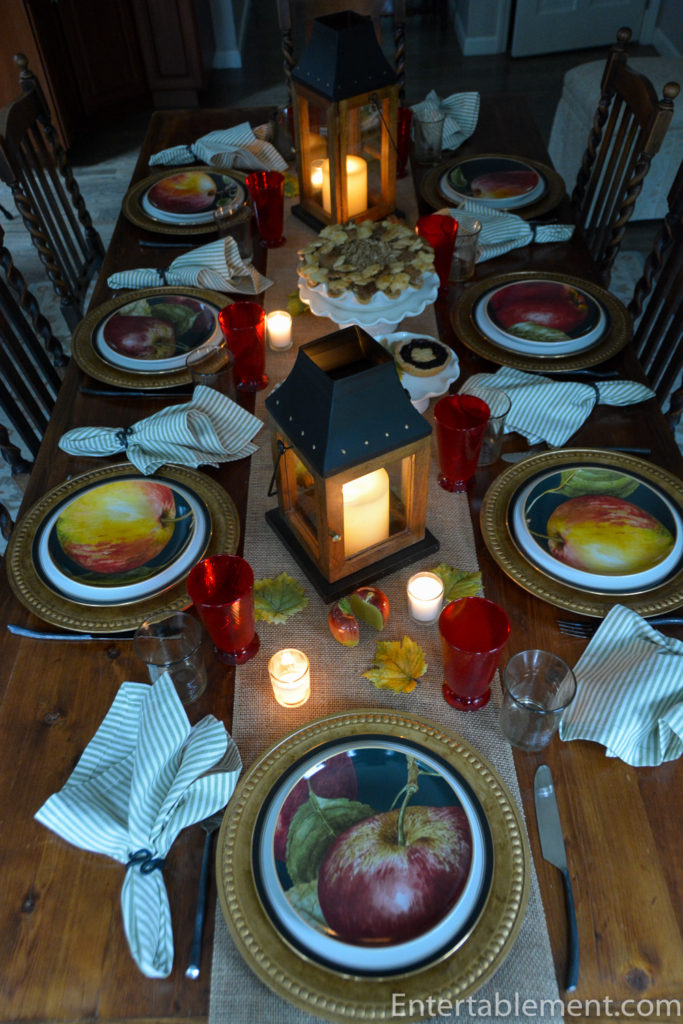 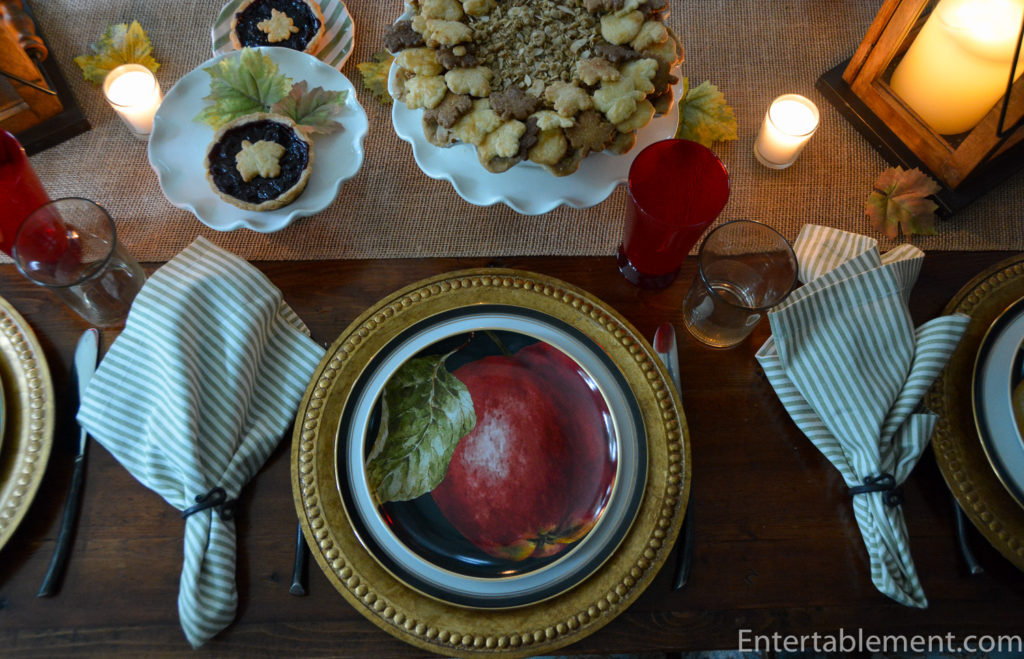 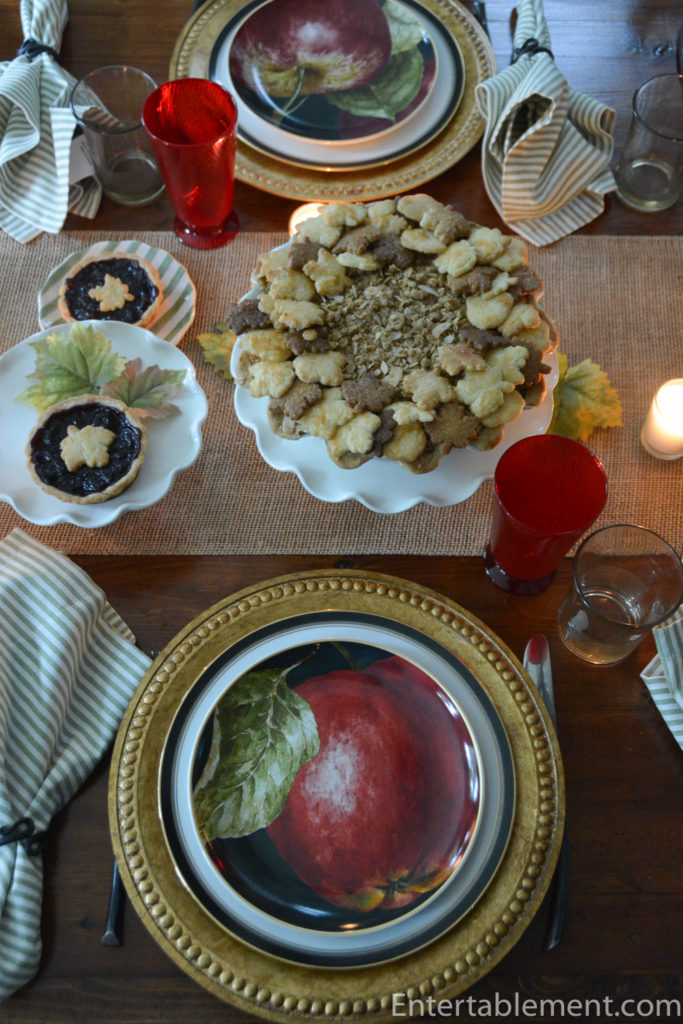 An apple salt & pepper set (an eBay find)  snuggled up to the candles. 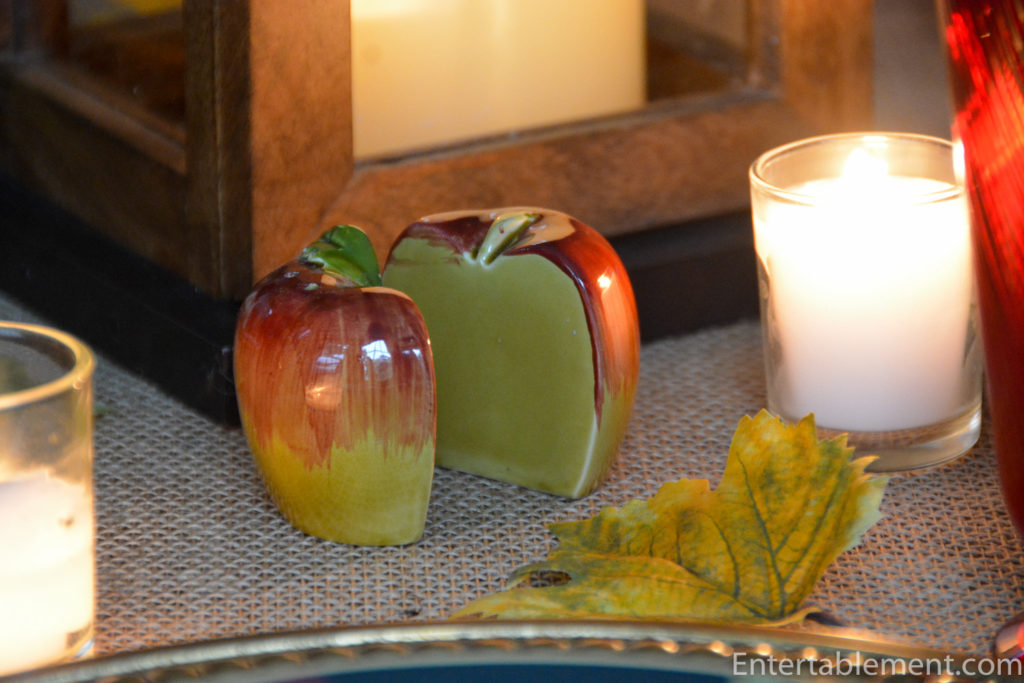 Thanksgiving for us Crazy Canucks is long gone, Halloween is over and with the final hurrah for Apple season behind us, it’s time to start Christmas preparations. I’ve been reluctant to invoke any more turmoil in our household with the renovations limping to their conclusion, but this week will see the kitchen china switch as I start preparing to snap Christmas tables. Speaking of the renovation, we await glass for the shower stall and the marble top for the island in the walk-in closet, which I am assured will come this week. The prints I ordered are being held hostage in the Canada Post labour dispute, so heaven knows when they will appear. Grrrr.

Dundee has entered the Diabolical Stage. He is fast becoming a household menace (though a very cute one). He flies from one end of the room to the other, climbing screens, caroming off furniture and chasing the other two cats mercilessly, batting them with his paws and tearing off before finally collapsing into deep sleep. He most often turns to Taylor, one of our Golden Oldies (she’s 12) for a naptime cuddle. She licks him, soothes his hurts and no doubt gives him wise counsel about tempering his mischievousness. We’ve noticed that he is particularly boisterous if his stomach is empty, so we are very attentive to keeping the food bowl full. There is never a dull moment with that scamp around! He looks deceptively innocent in that particular shot. Do not be deceived! 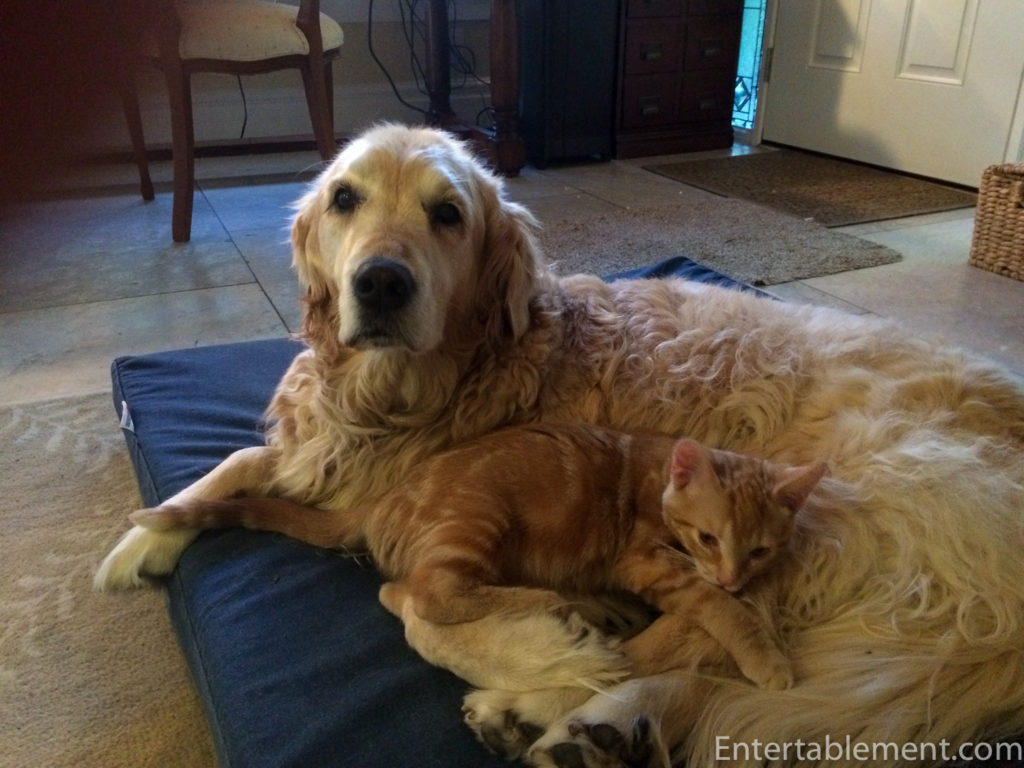 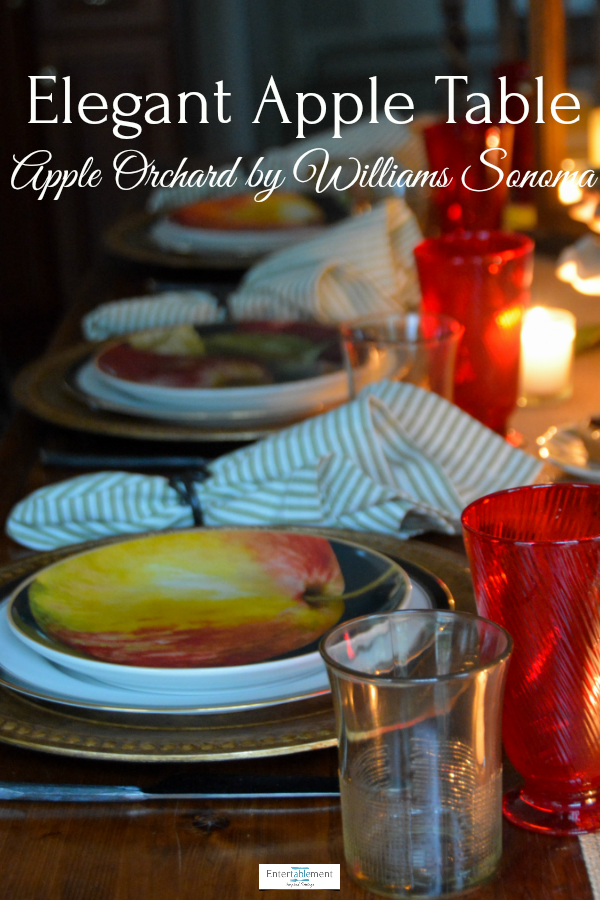