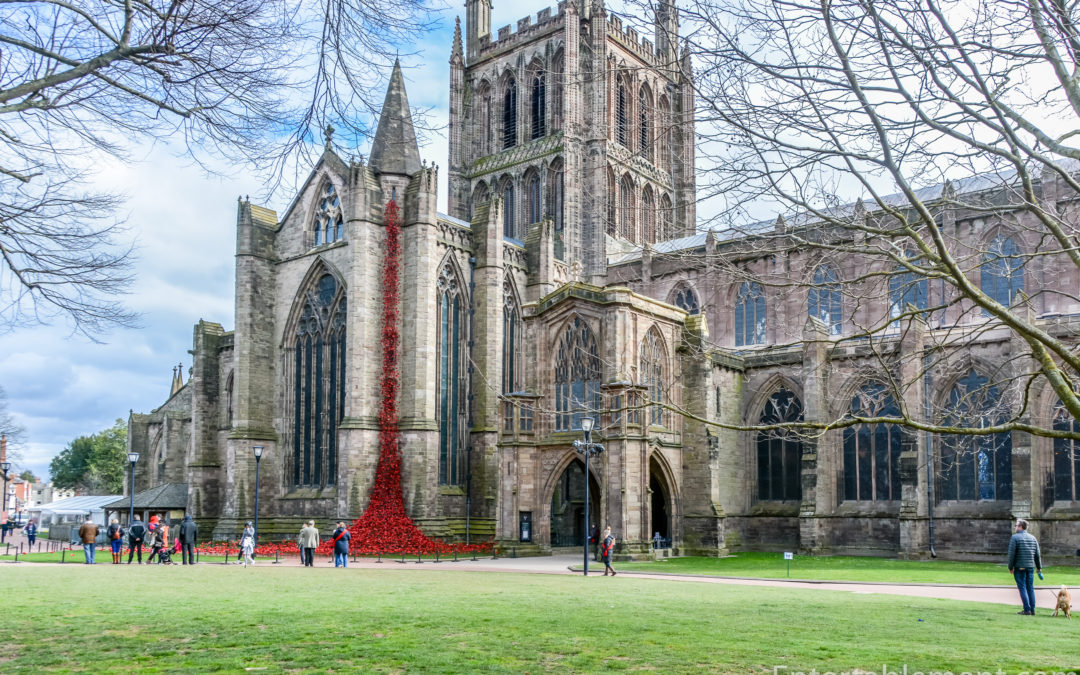 On this most poignant of Remembrance days, the centenary of Armistice Day of WWI, let’s have a look at the display of ceramic poppies which has been making its way around the UK since August 2014. 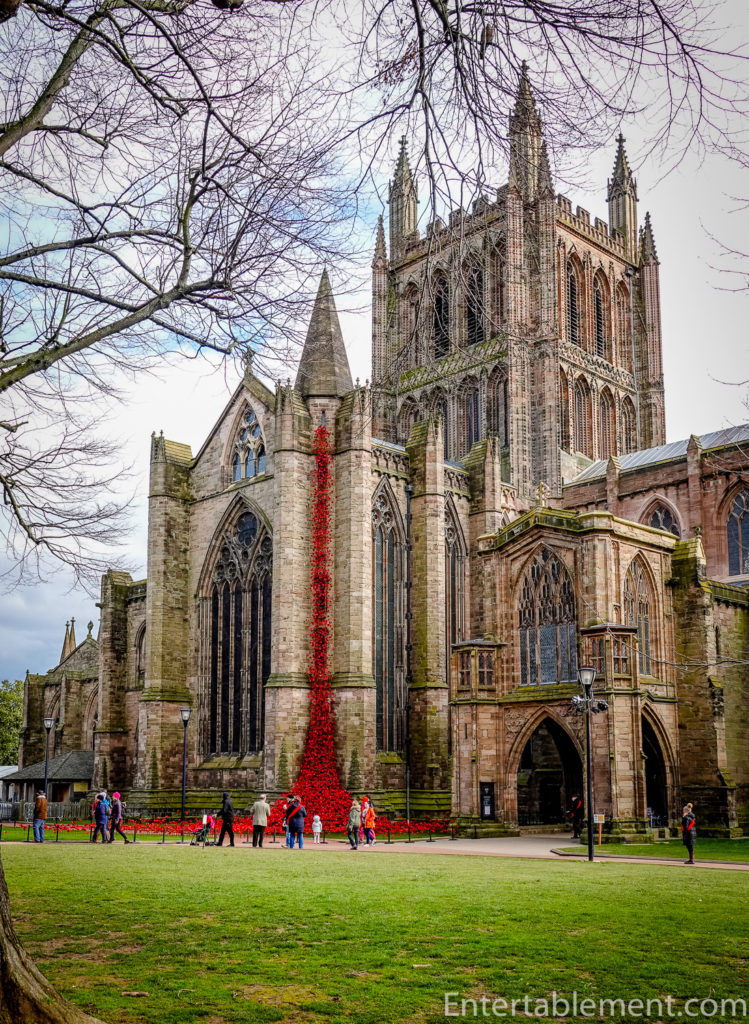 We visited the Weeping Window display at Hereford Cathedral this past spring. 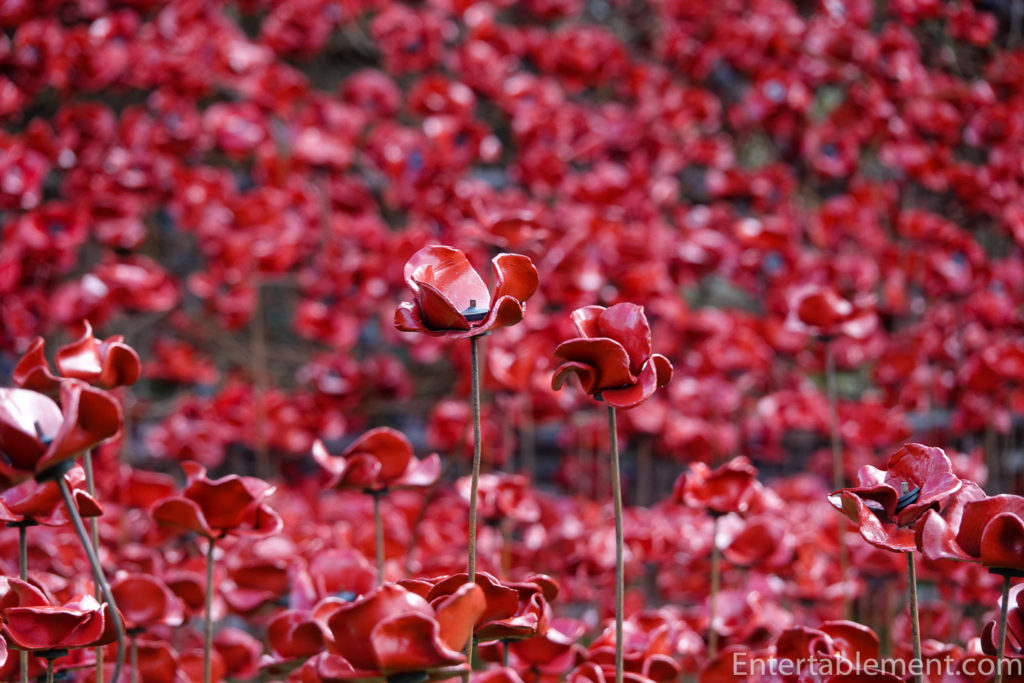 I’ll do a more fulsome write-up on the Cathedral at a later date, as it has many other features worth mentioning, but for now, let’s just pause and see the poppies. 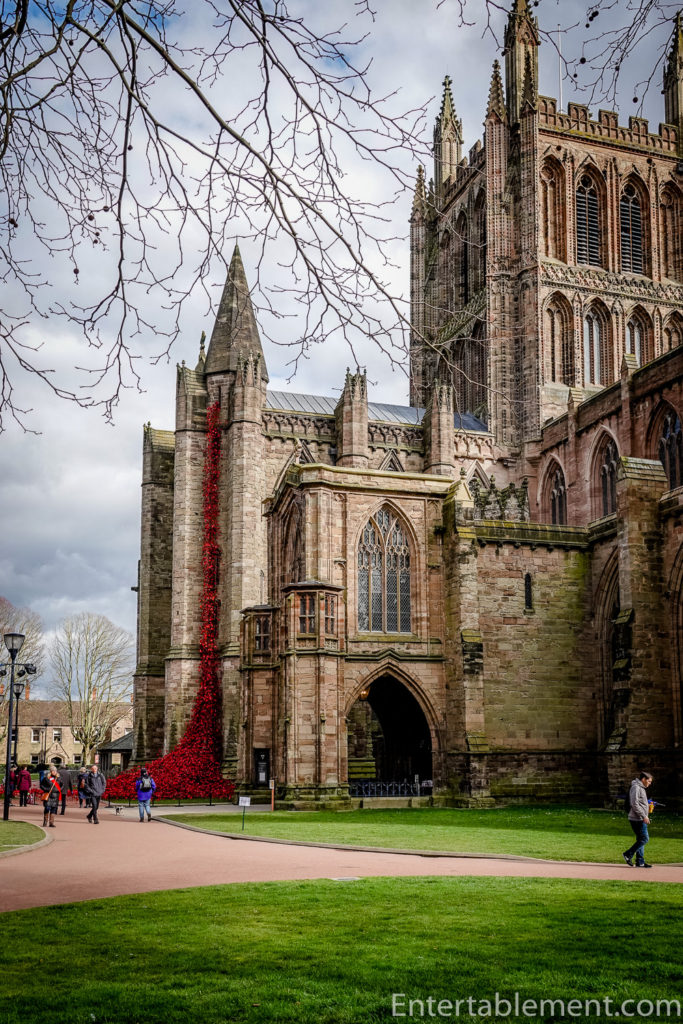 “Weeping Window is from the installation ‘Blood Swept Lands and Seas of Red’ – poppies and original concept by artist Paul Cummins and installation designed by Tom Piper – by Paul Cummins Ceramics Limited in conjunction with Historic Royal Palaces. The installation was originally at HM Tower of London from August to November 2014, where 888,246 poppies were displayed, one for every British or Colonial life lost at the Front during the First World War. Together, the sculptures Wave and Weeping Window are made of over 11,000 poppies.” 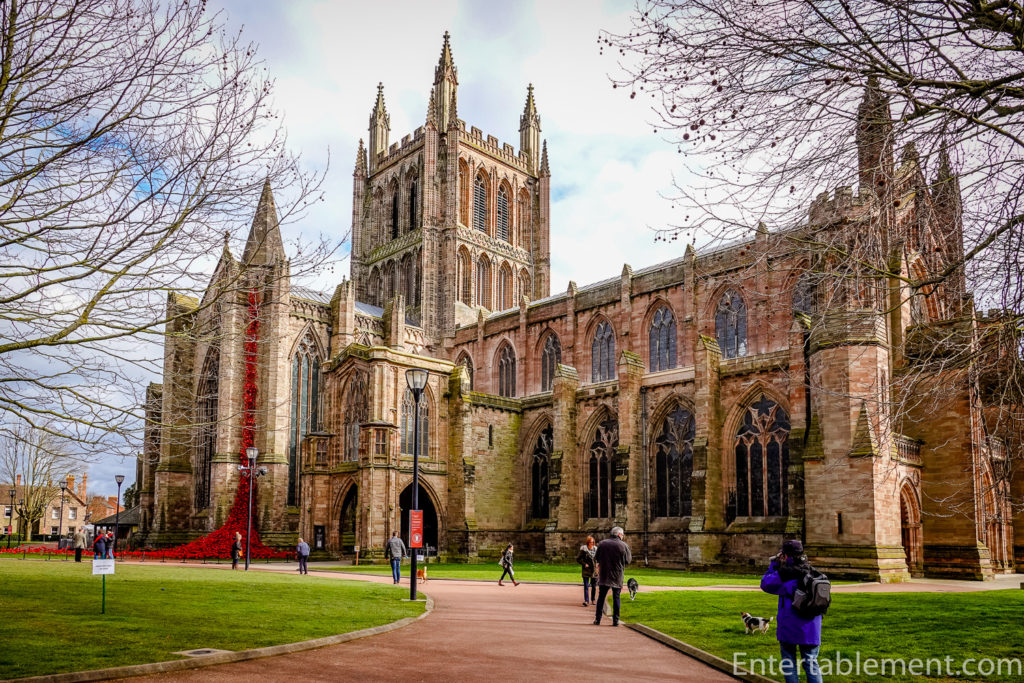 Over 196,000 people visited Poppies: Weeping Window, whilst it was displayed at Hereford Cathedral between 14 March and 29 April of this year. 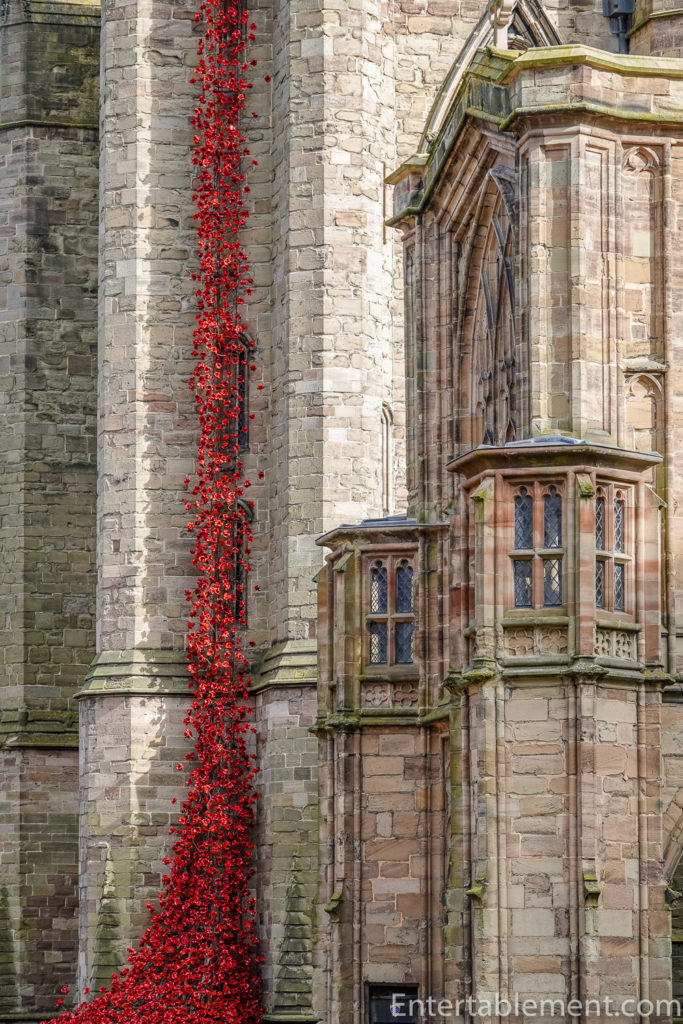 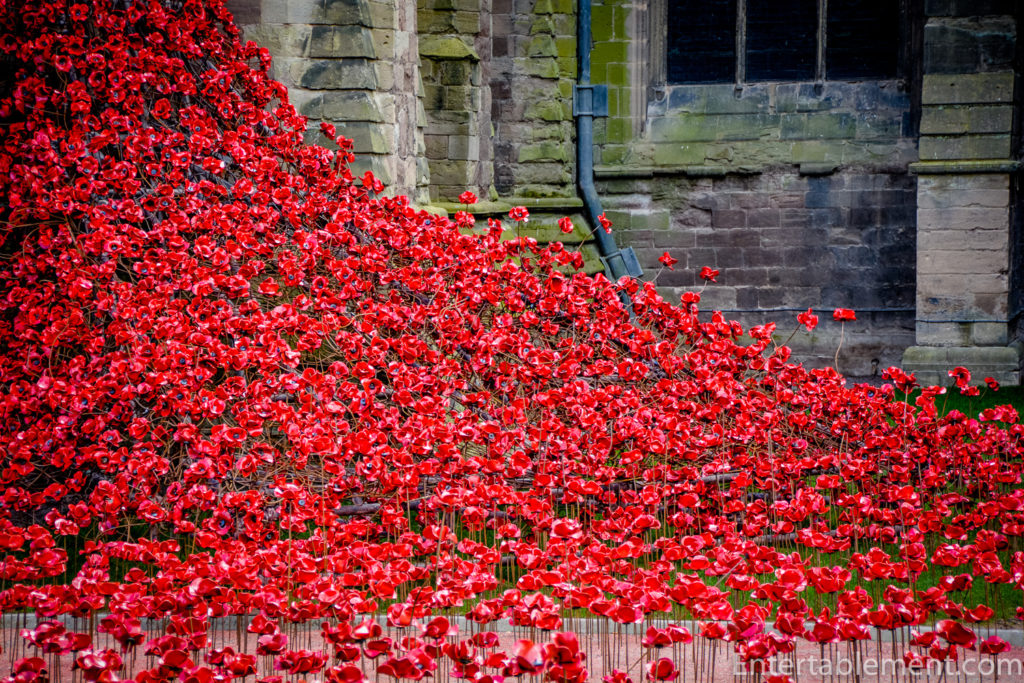 From what I could gather, when Bloodswept Lands and Seas of Red was dismantled in London in the fall of 2014, scaled down versions of the display went around the UK and remained at each site for six weeks to three months, Here is a link to where it went. What a marvellous way to keep it fresh for the four-year remembrance period of WWI. 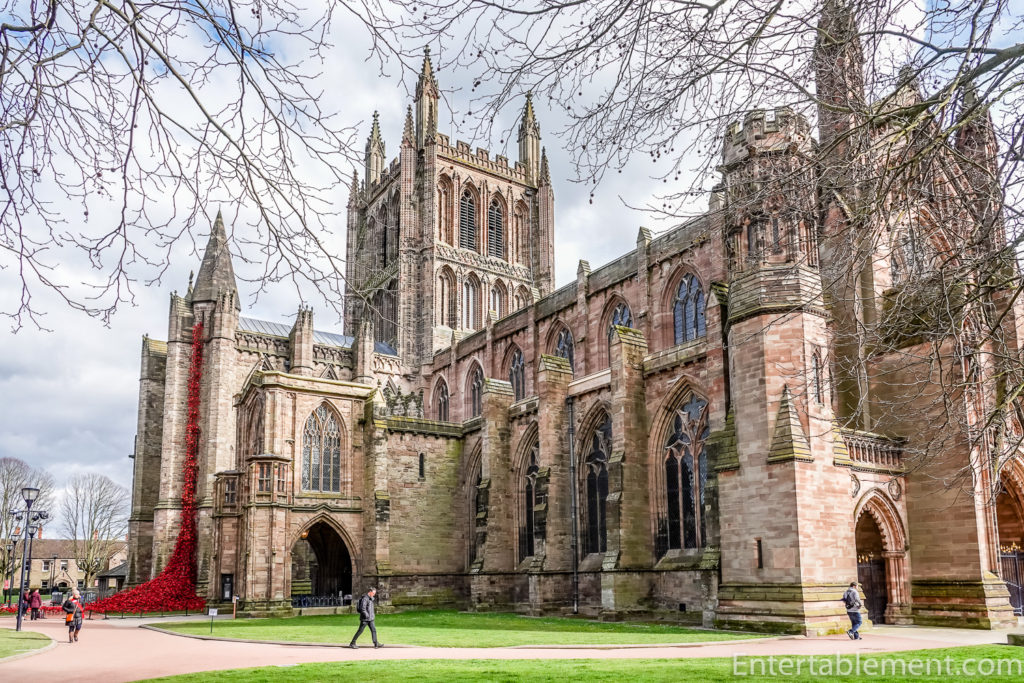 By the time it left Hereford, it had been seen by over 3.75 million people and was on its way to Carlisle Castle, where it stayed from 23 May to 8 July, before heading to its next location. 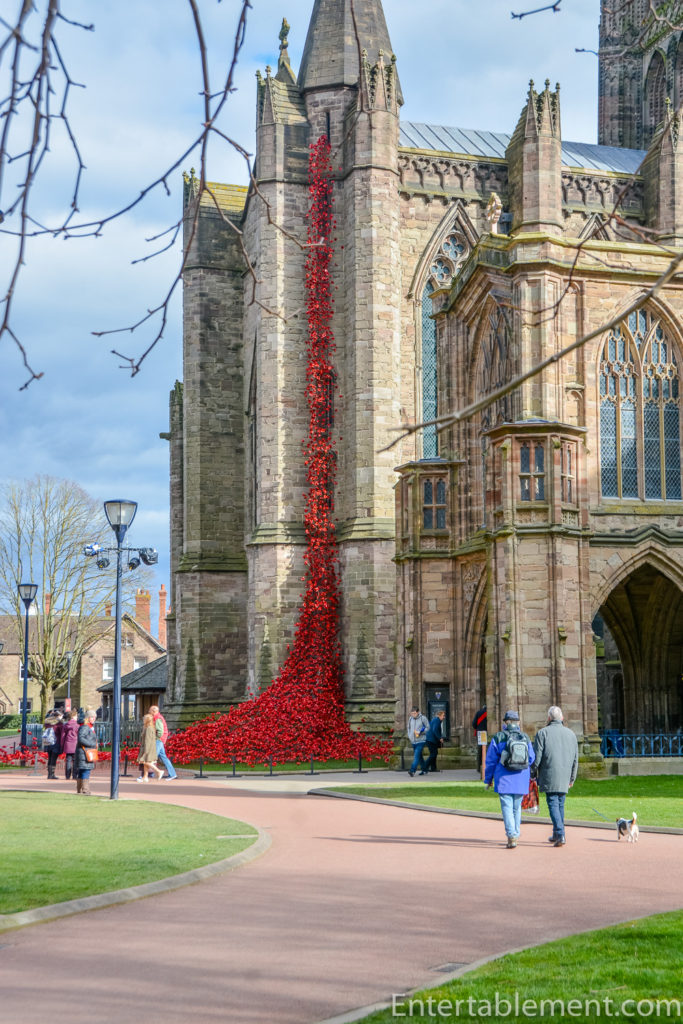 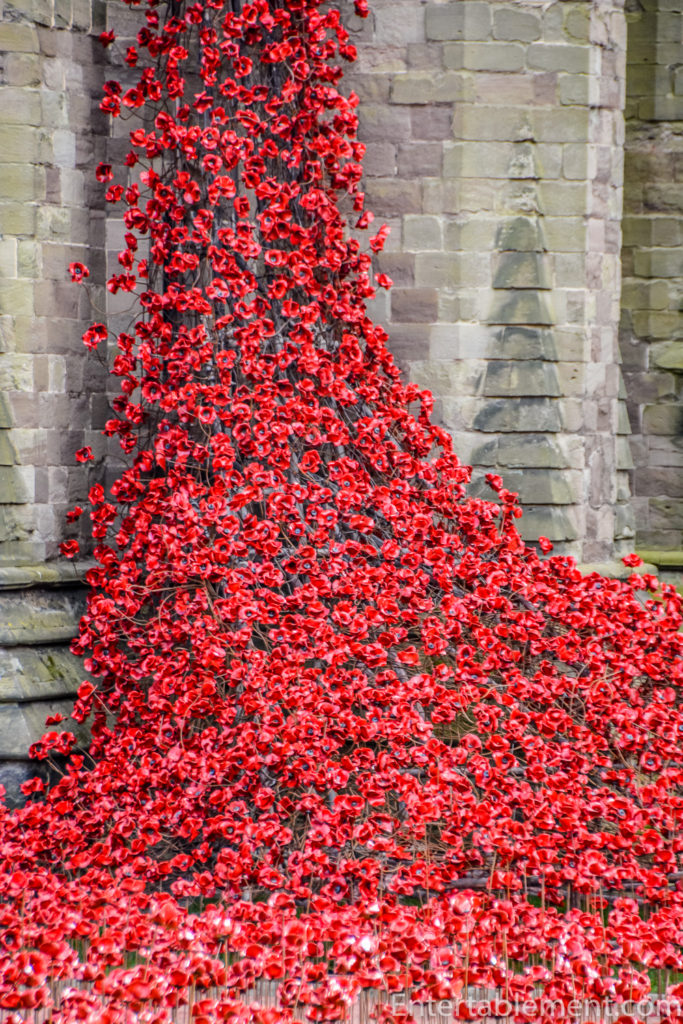 We were lucky enough to see the original display, Bloodswept Lands and Seas of Red, at the Tower of London in September 2014. 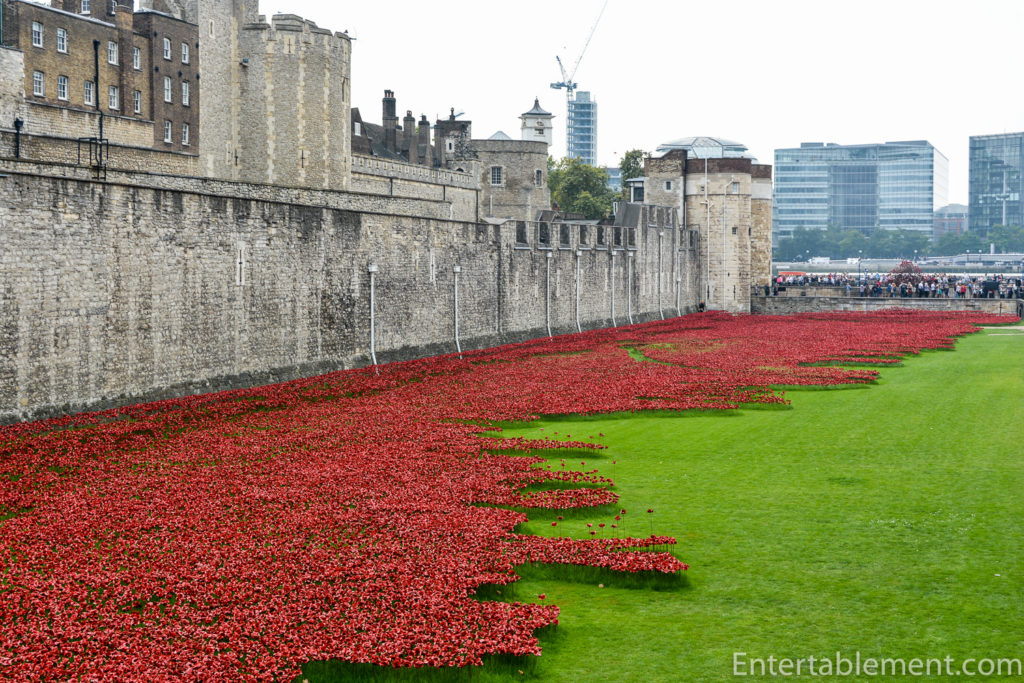 The Weeping Window portion displayed at Hereford originally cascaded down the Tower wall. The Wave display comprises the undulating wash of poppies in the floor of the Tower’s moat. 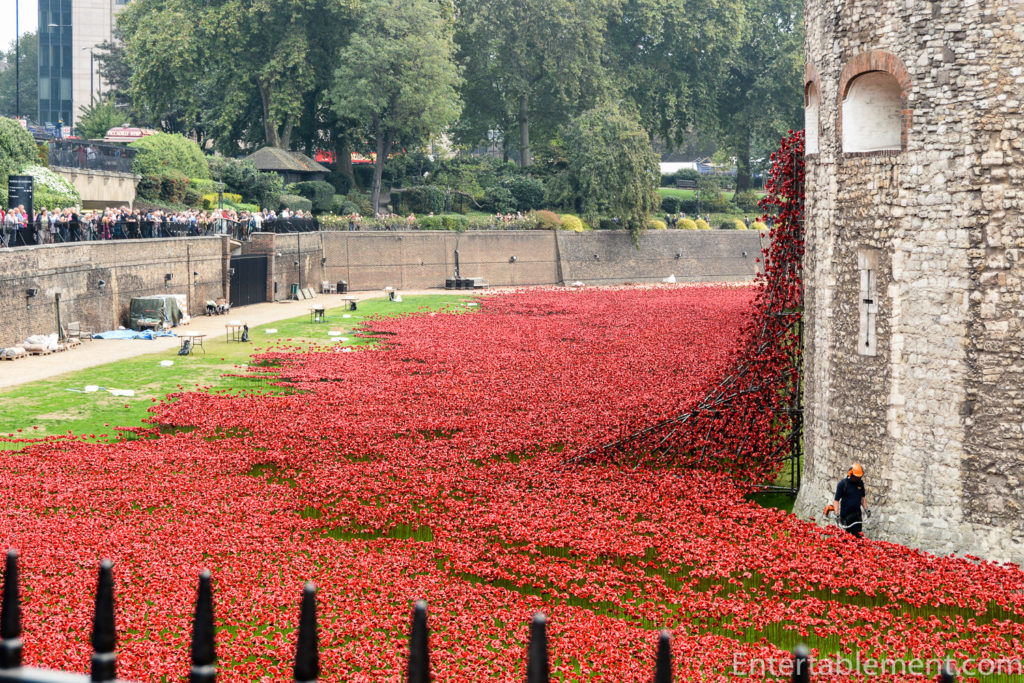 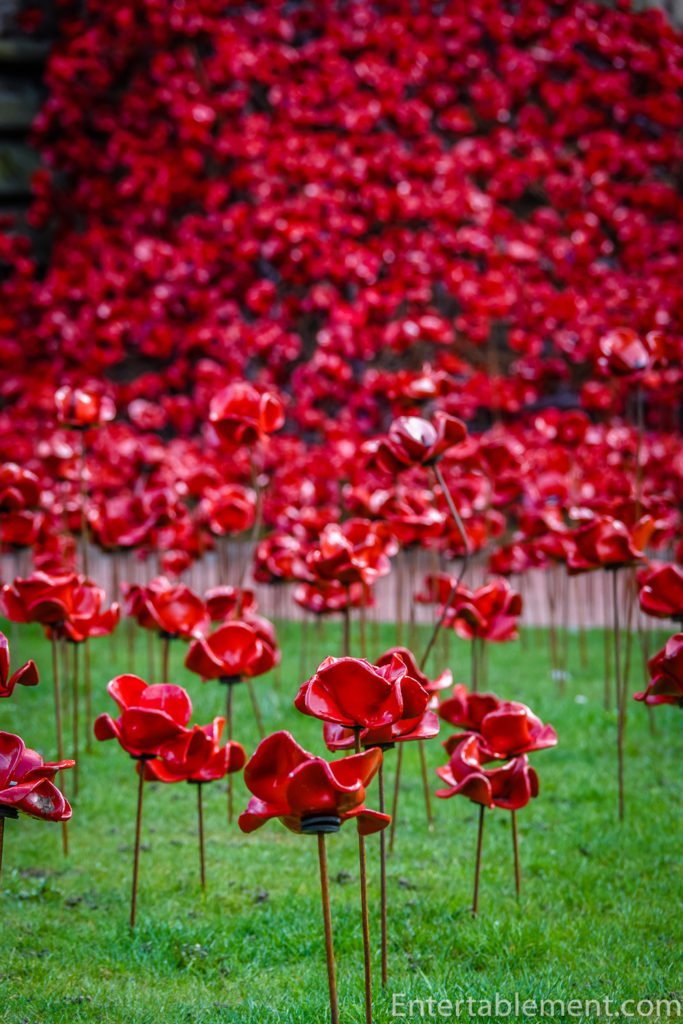 A total of 888,246 poppies were installed, each one comprising a set of red ceramic petals placed carefully on a steel “stem”, and then a central black ceramic piece was screwed on top to keep the petals in place. 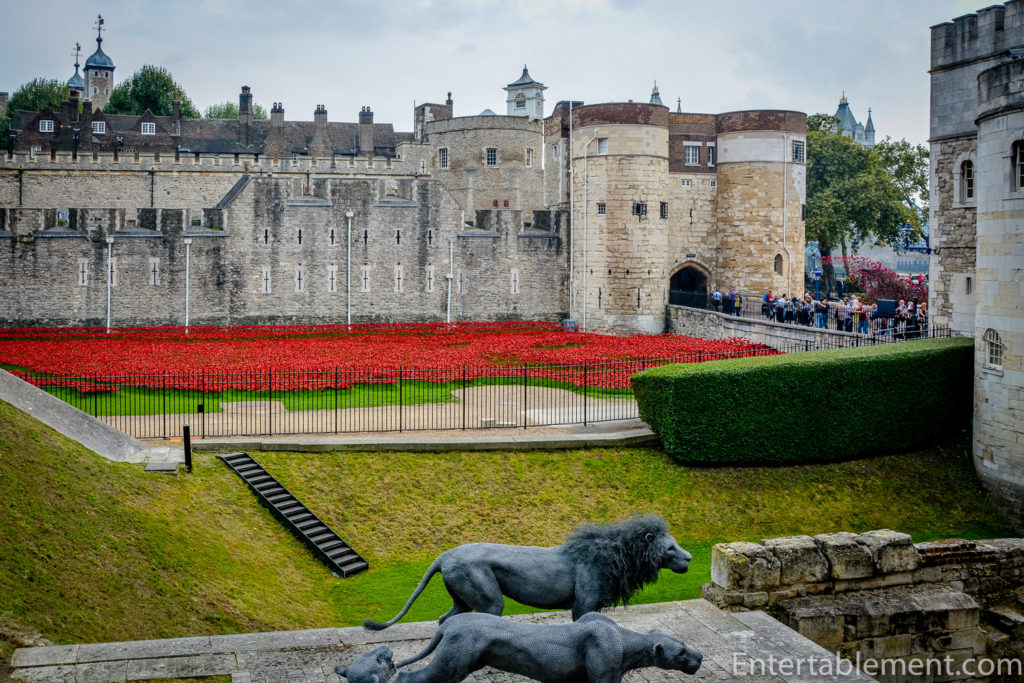 The poppies were installed by volunteers, each at a rate of about 500 per day. What an undertaking, but how worthwhile! It was incredibly moving. All of us were snivelling away, swallowing hard, dabbing eyes and blowing noses surreptitiously. 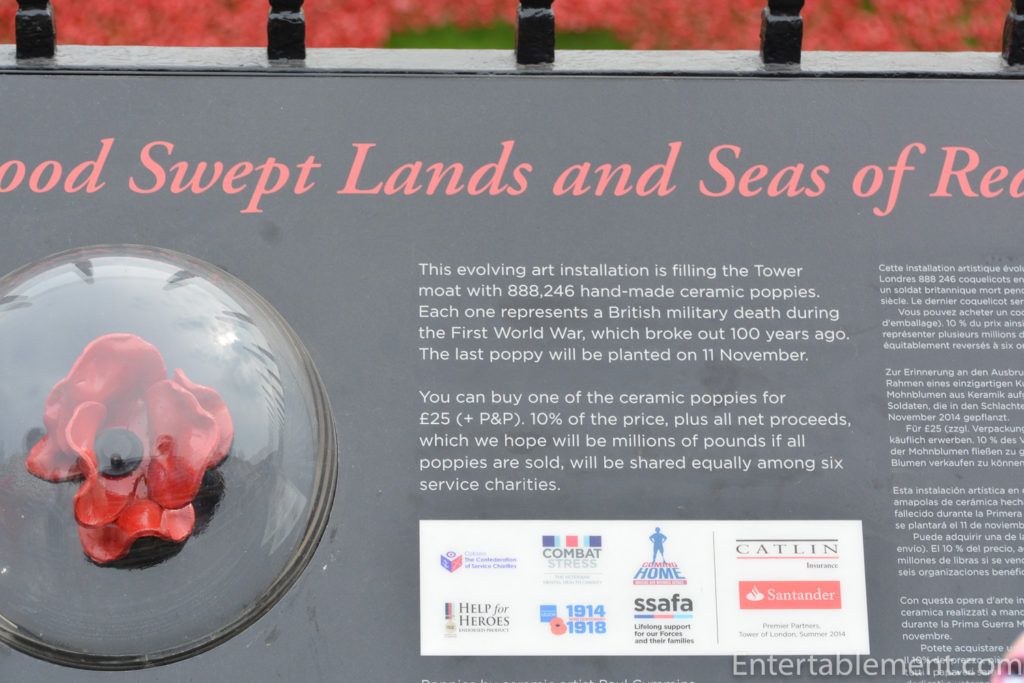 As The Very Reverend Michael Tavinor, the Dean of Hereford Cathedral described it

“Many thousands came to visit, young and old, from all over the country. Their reactions were as varied as the locations they travelled from, but a common experience seems to be one of remembrance, thanksgiving, regret and beauty and our wonderful volunteers (who were present in all weathers) engaged in many deep and profound conversations with our visitors.” 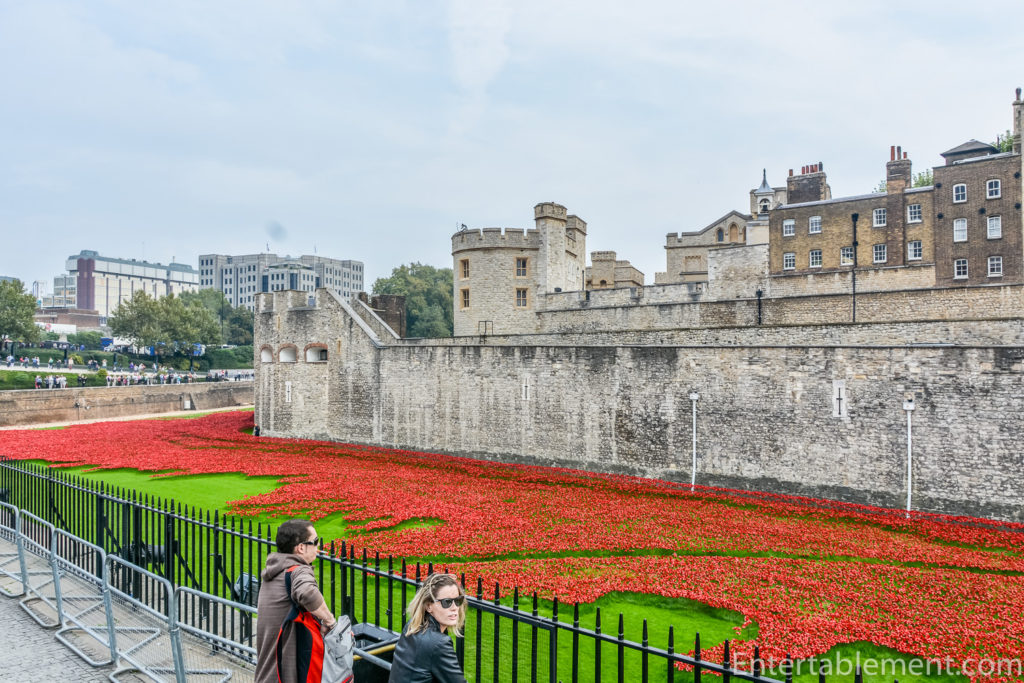 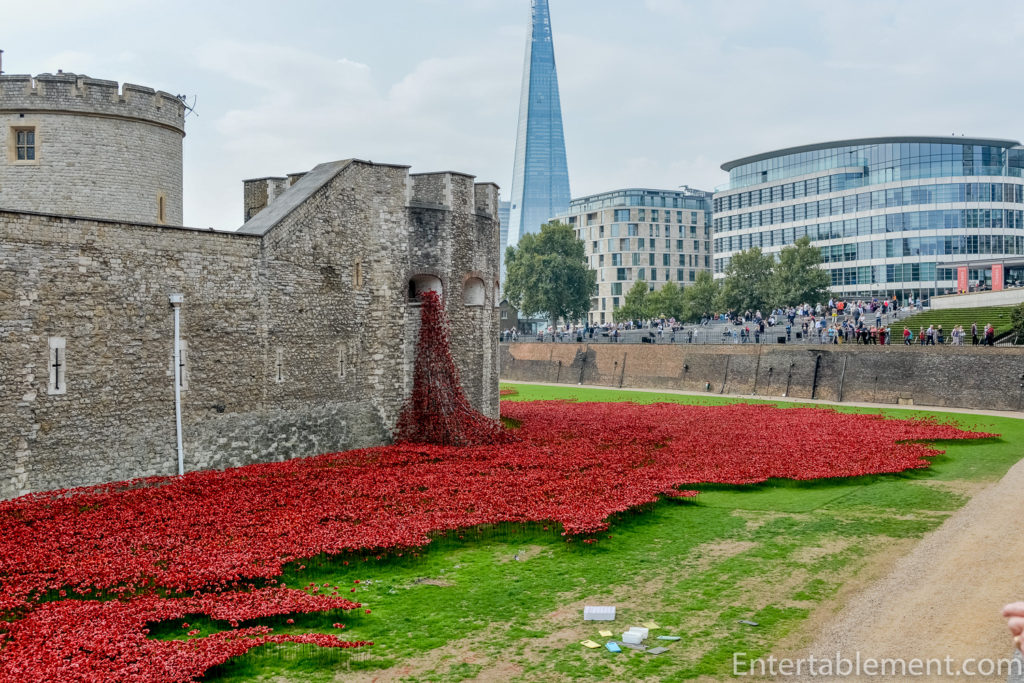