A Cheerful Country Table and a Book Recommendation 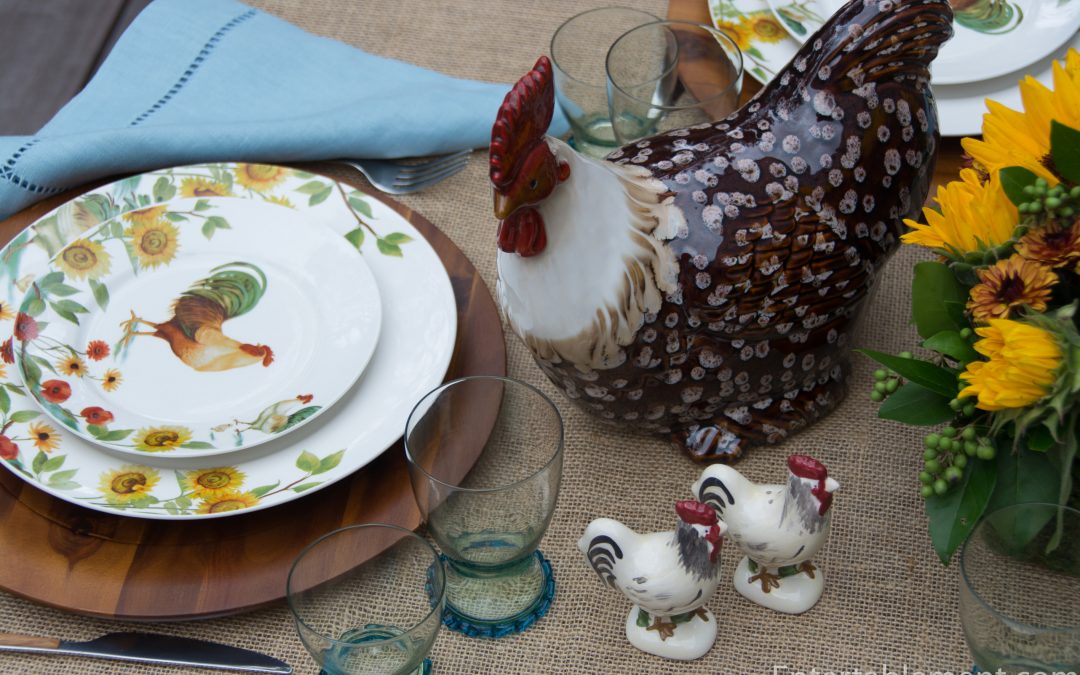 It’s time for a change of tableware, I think. 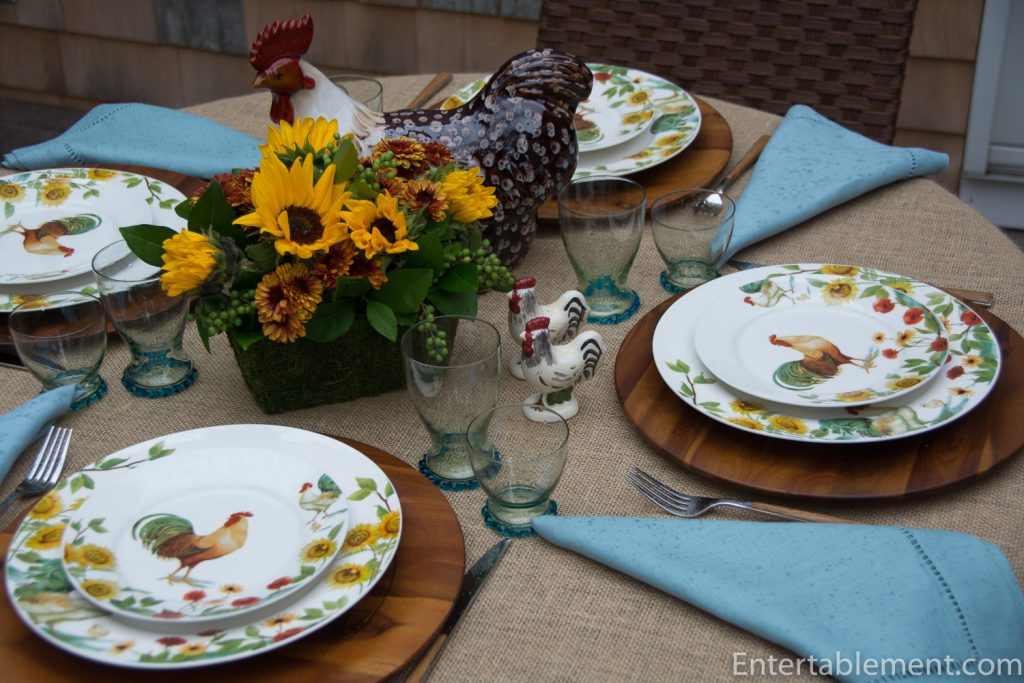 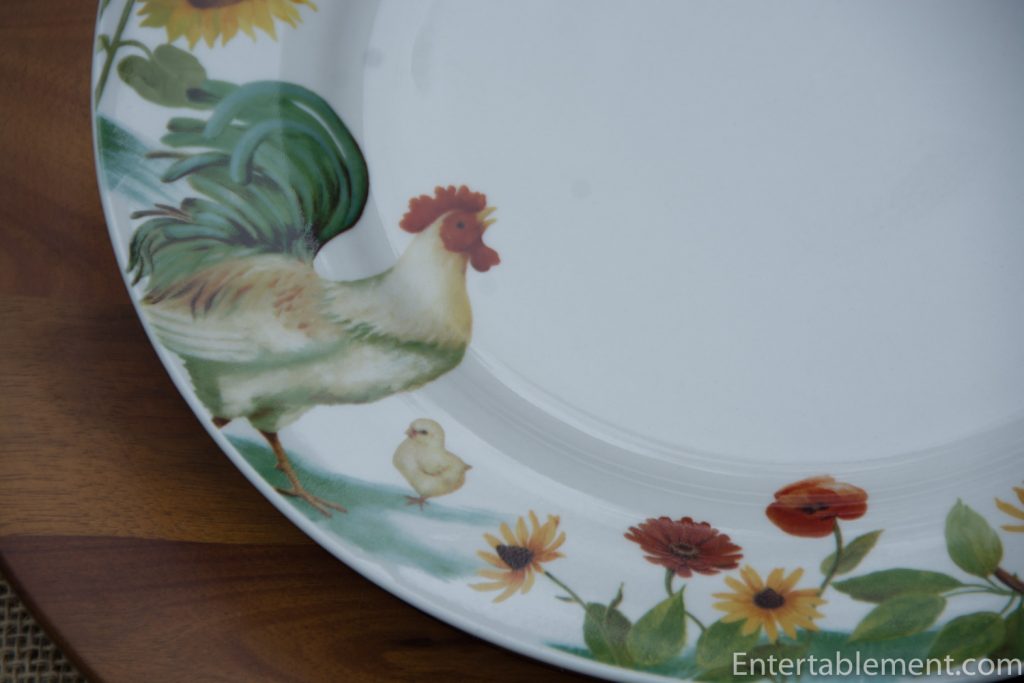 Rooster Meadow is one of those timeless patterns that warms the heart, without putting a strain on the pocketbook. This colourful rooster struts across the salad plate, his turquoise tail feathers fluffed and luxuriant. 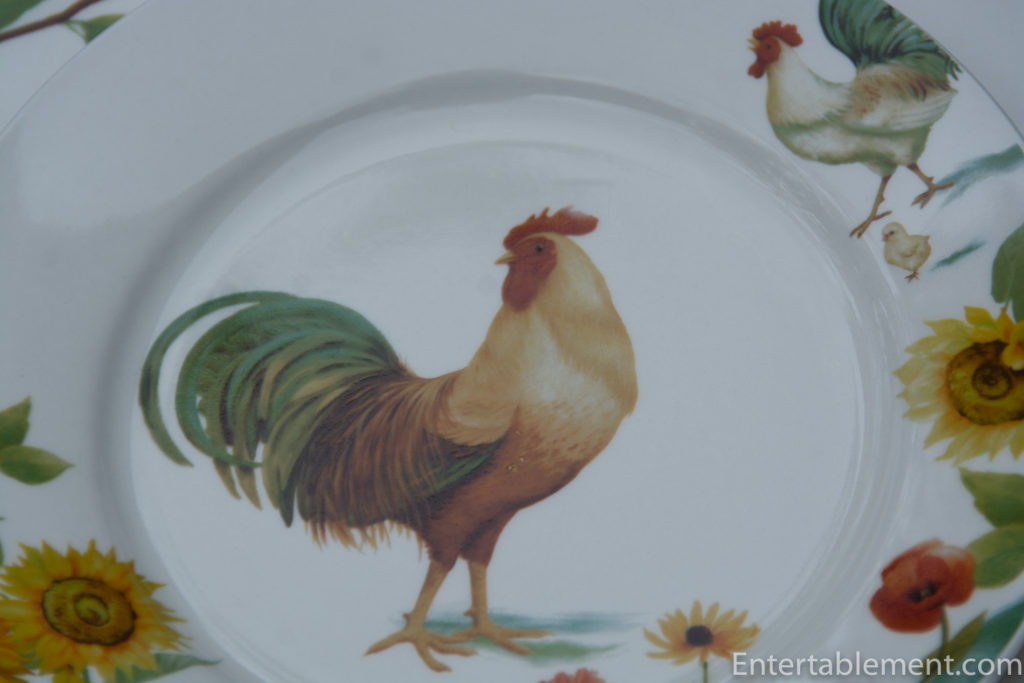 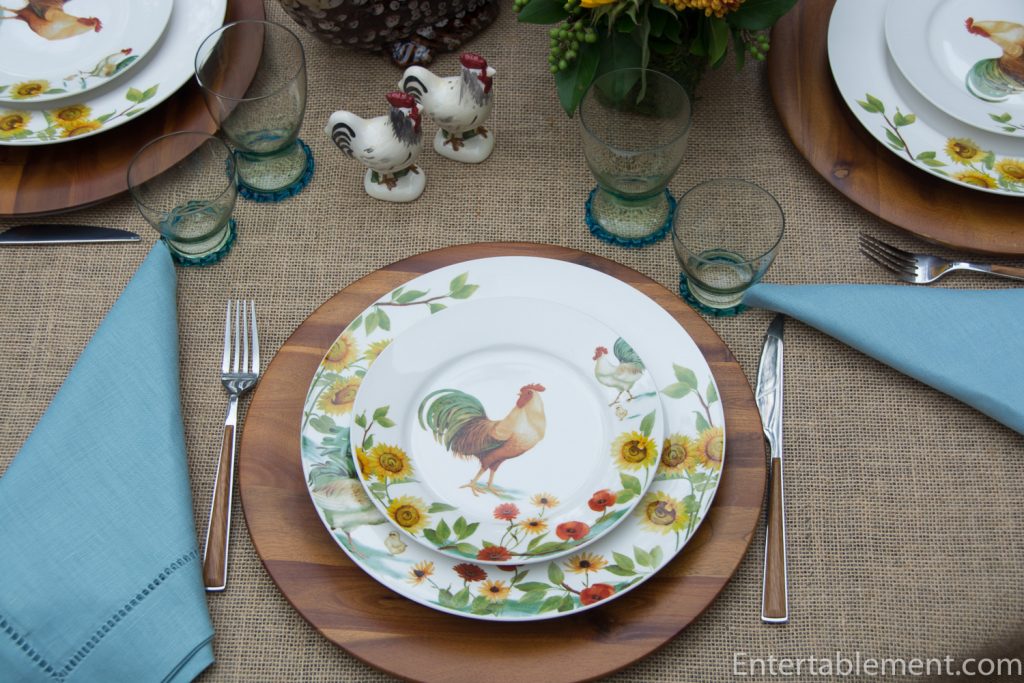 It seems to me that sunflowers are available any time of year now; chrysanthemums have been forever. Why not gather some up for a sunny-side-up table in the dank months of winter? 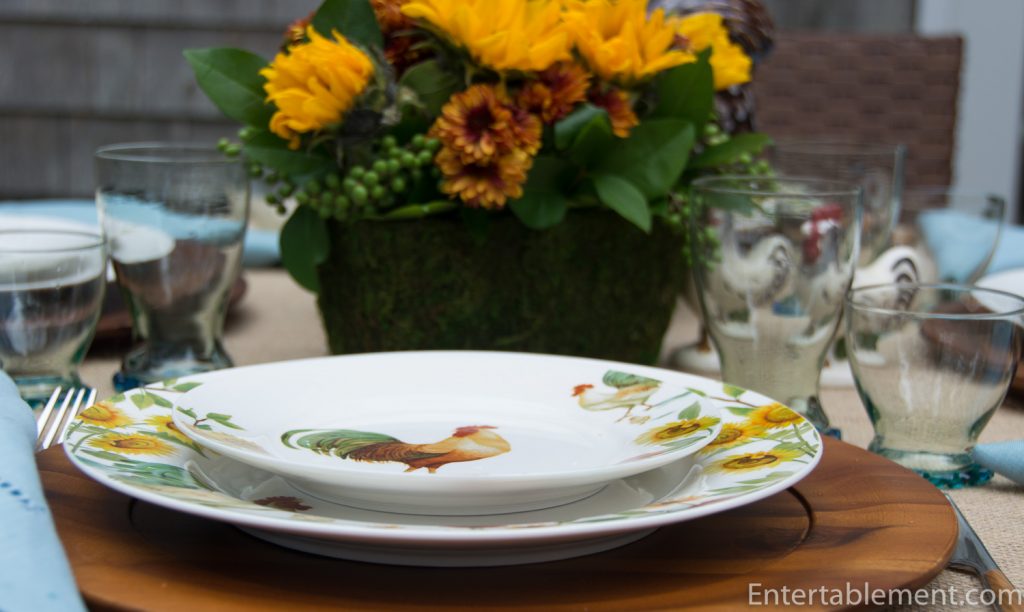 They climb up the sides of the dinner plate, heads bobbing cheerfully. 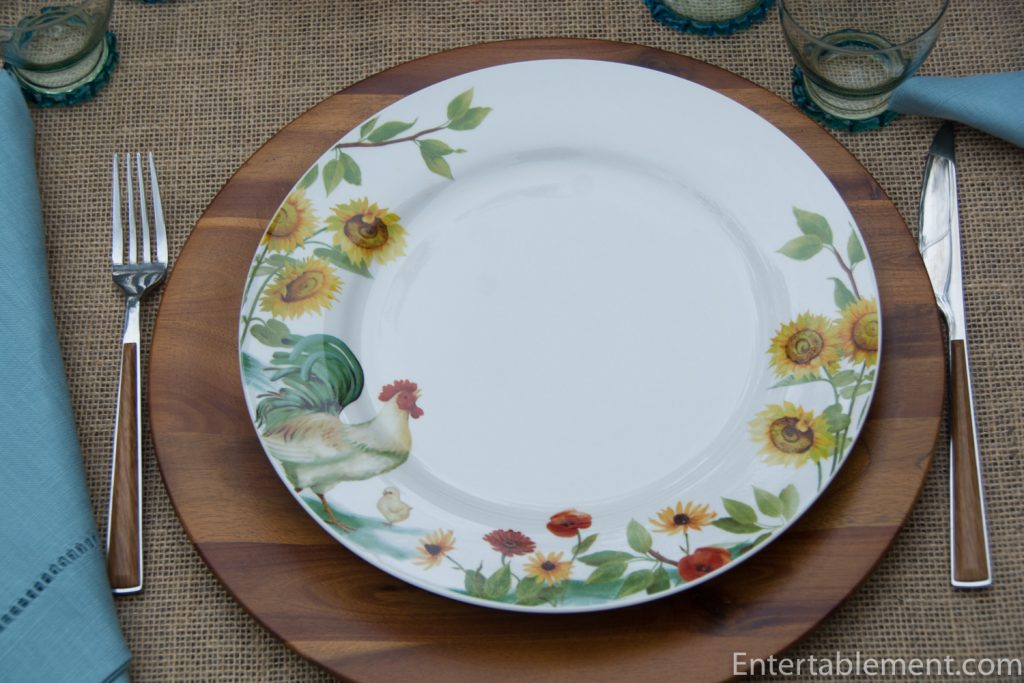 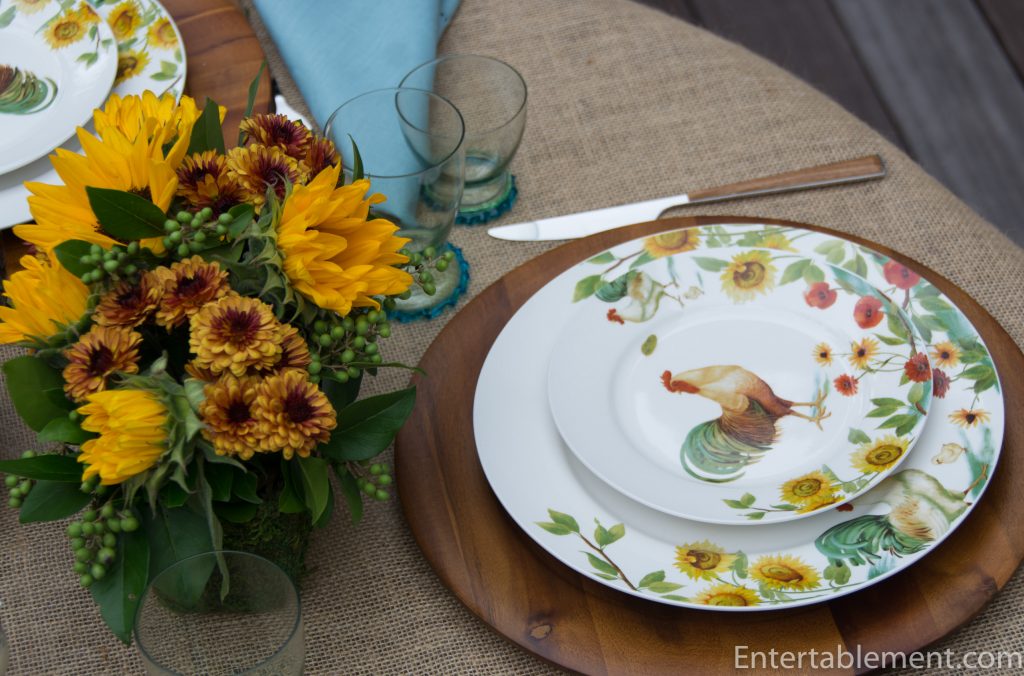 Turquoise Venetian juice glasses picked up the similarly coloured elements on the plates along with “Blue Smoke” hemstitched napkins from Pottery Barn (long discontinued, but they now have a casual cotton offering in the same colour). 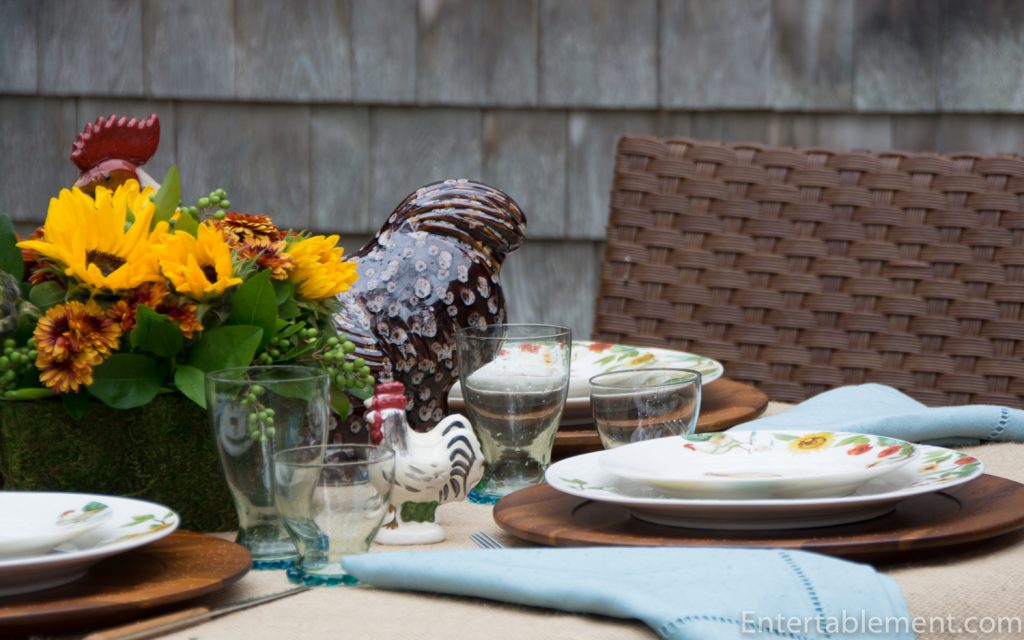 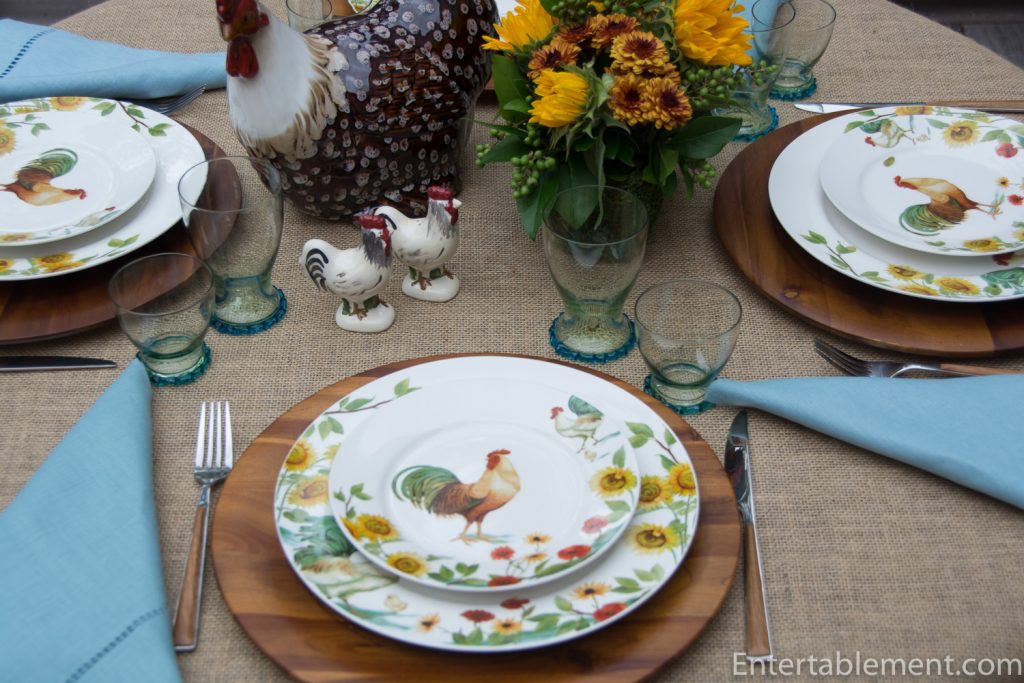 A sitting hen from Homesense joined a couple of rooster salt and pepper shakers. 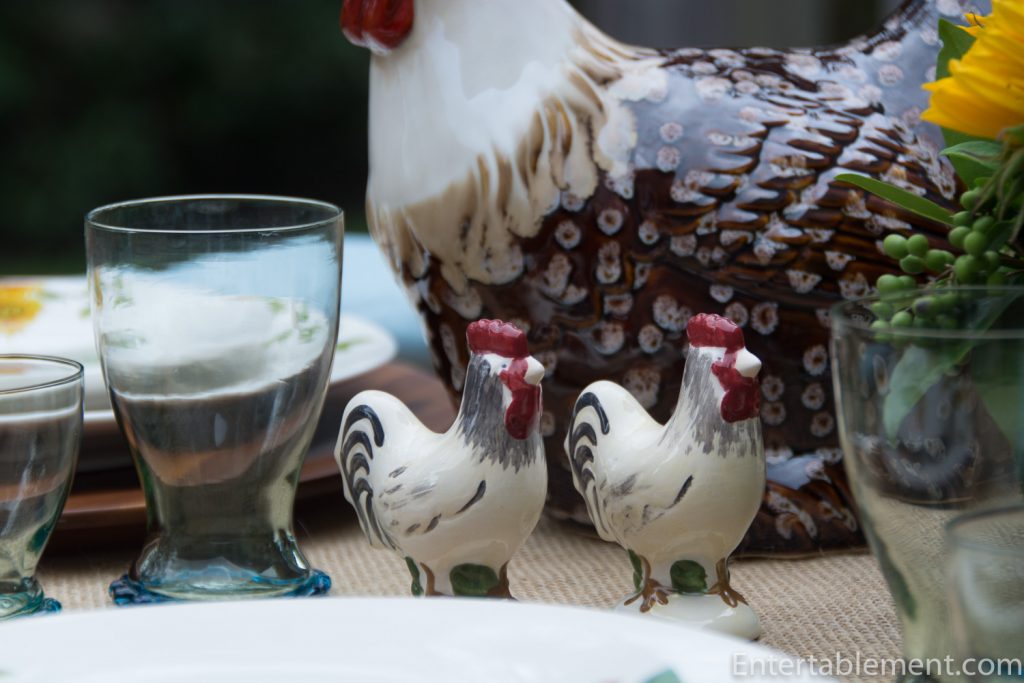 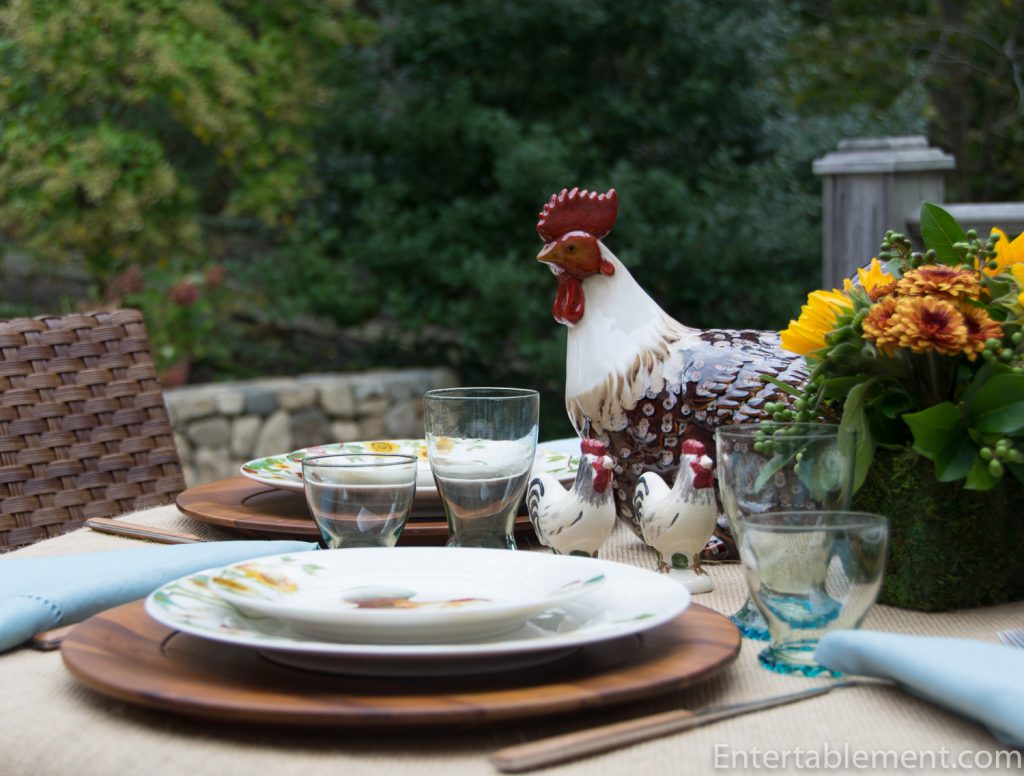 The flatware is Sawyer by World Market. The Acacia Wood chargers were from Amazon. The ones I got seem to be unavailable, but these look close. 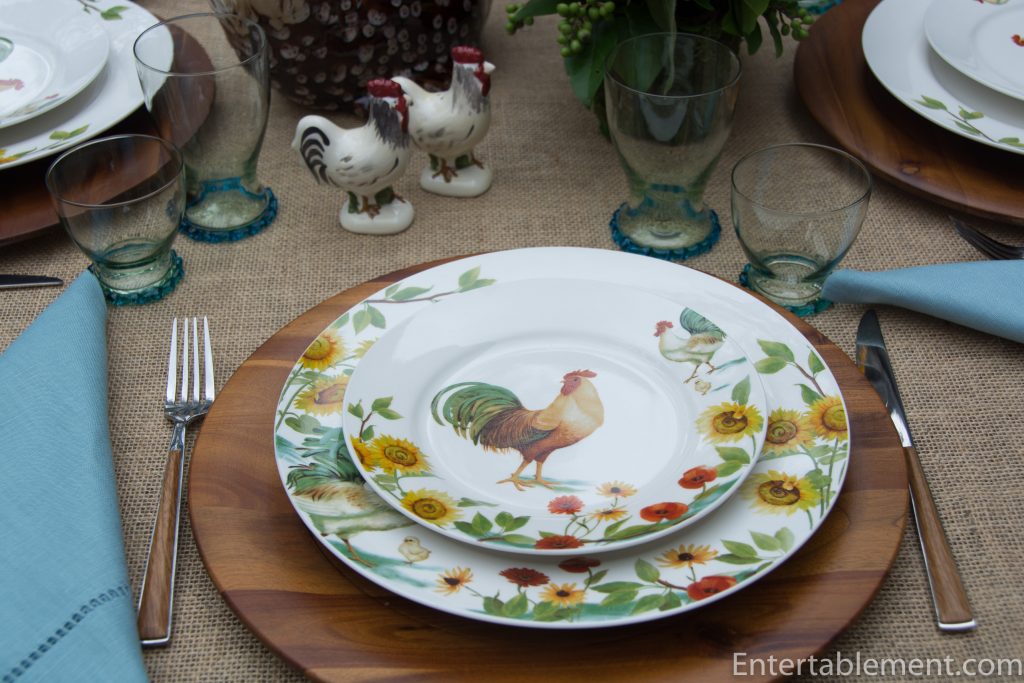 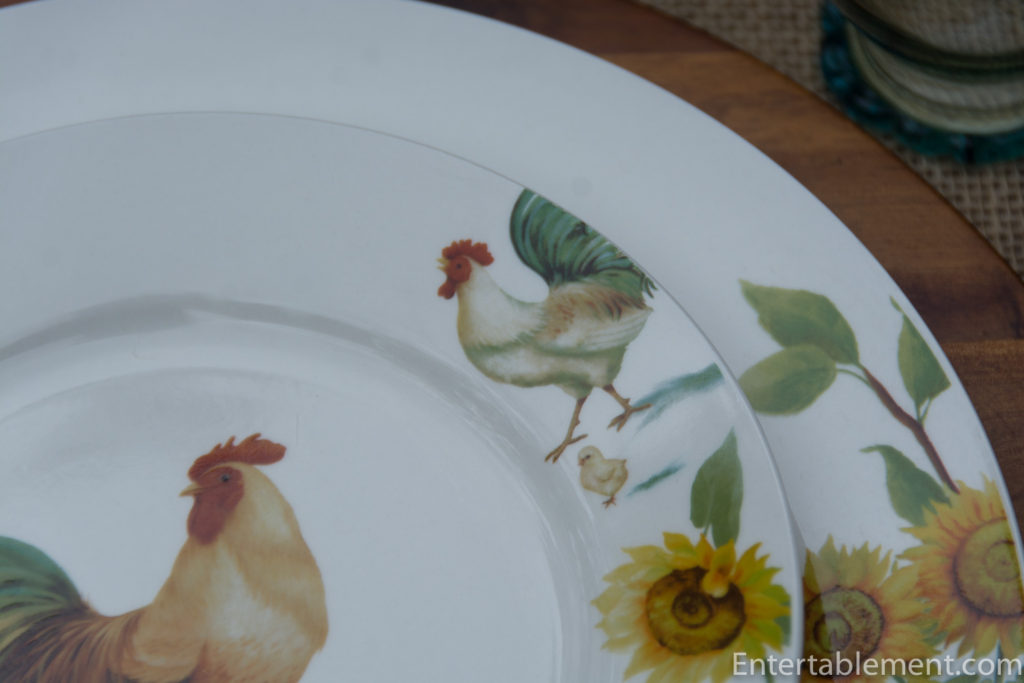 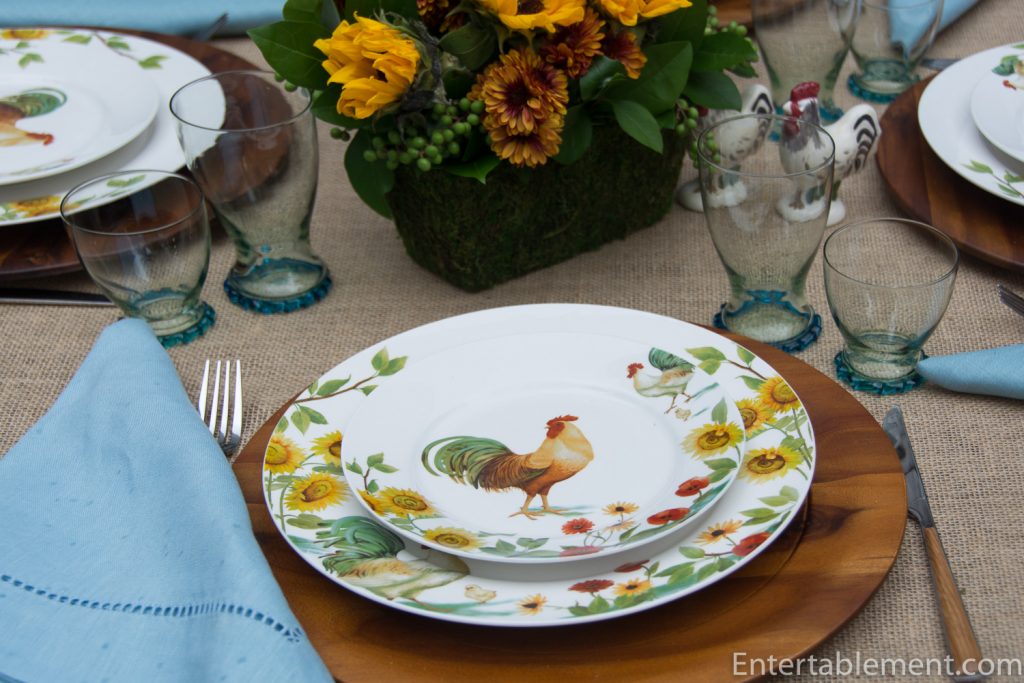 I’m striving to maintain my cheerfulness as we batten down for the second day of an ice storm. All the trees are coated with a thick layer of ice and walking outside is taking your life in your hands, It’s pretty, but also pretty treacherous. “Freezing drizzle” is how it’s been described. Yuck, I say. Time for homemade soup, a good book and snoozing dogs by the fire.

Speaking of good books, I just finished reading a book I received for Christmas:  Great English Interiors by David Mlinaric and Derry Moore. 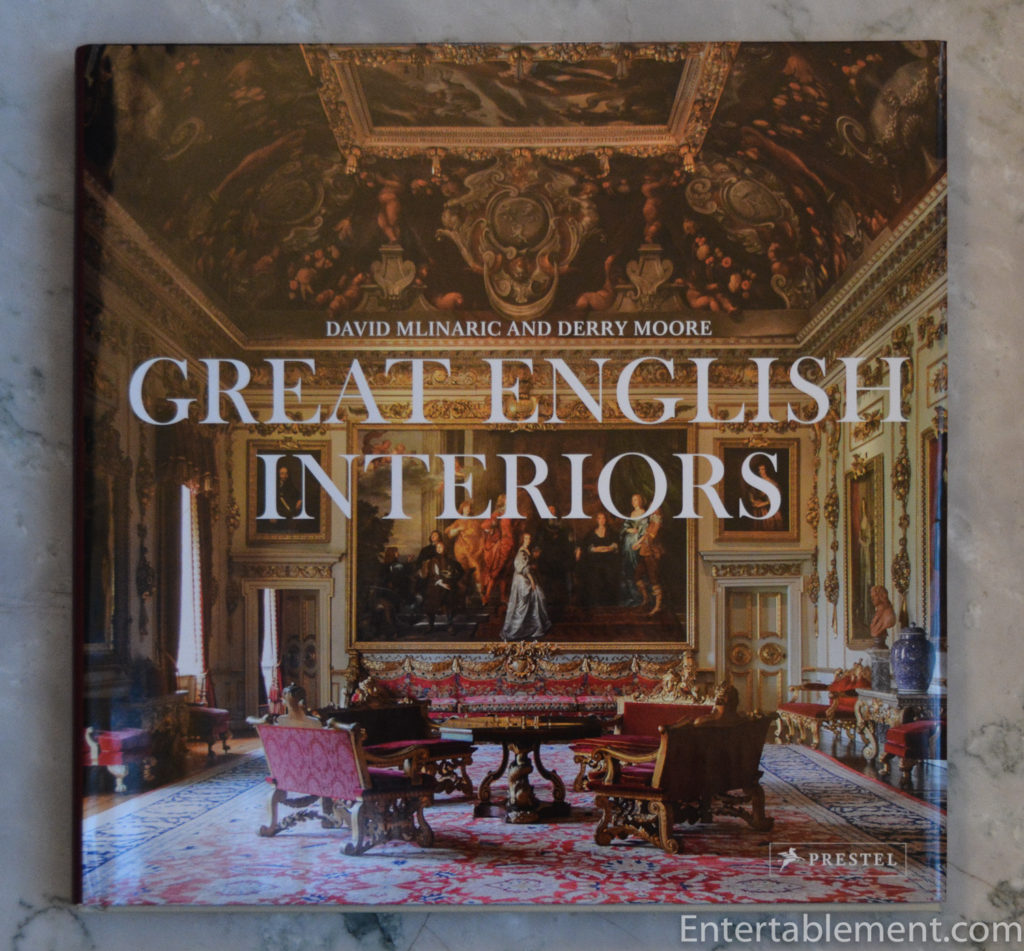 It’s absolutely scrumptious, with stunning pictures and a short history of some of the finest houses from the 15th century onwards. I’d never really appreciated how house styles changed as the need for fortification diminished with the advent of gunpowder. Fortified manor houses used to have plain blank walls facing outward, and any light was gained from the rooms open to internal courtyards. That makes sense. Starting in the 15th century, however, houses like Haddon Hall, began showing expanses of glass on the outward facing windows.

You might remember me commenting on the oddly constructed windows with the rippling glass. The authors give an explanation of those in the book. 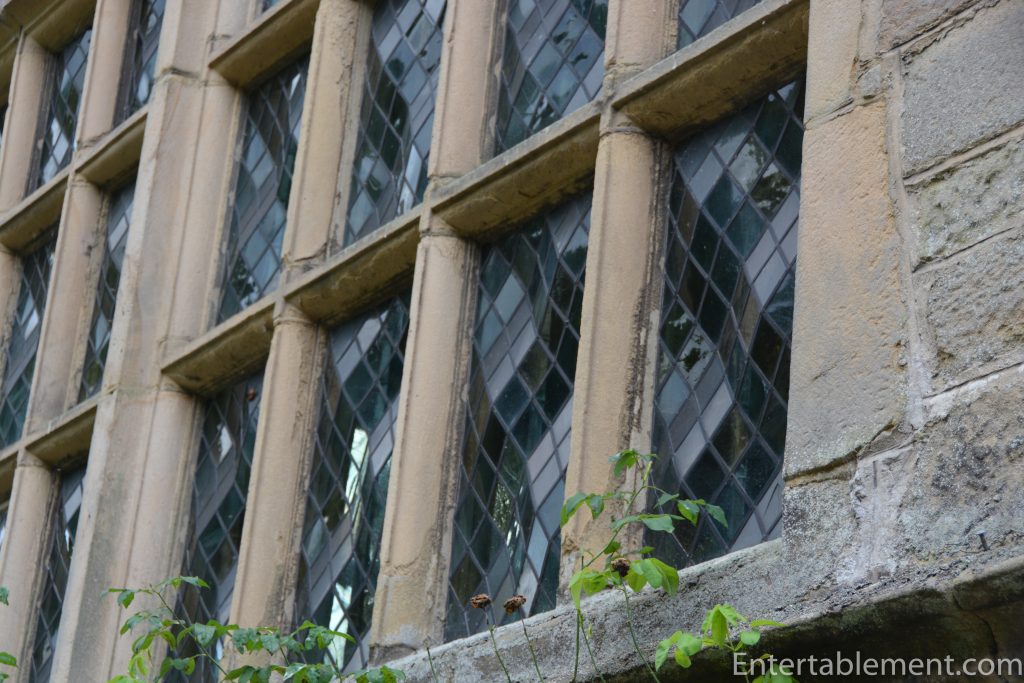 Other properties photographed in the book include Chatsworth, West Wycombe. Waddesdon, and several I haven’t seen, some of which are private homes, such as Heveningham Hall, below. Isn’t that plasterwork to die for? (the actual picture in the book is much better). 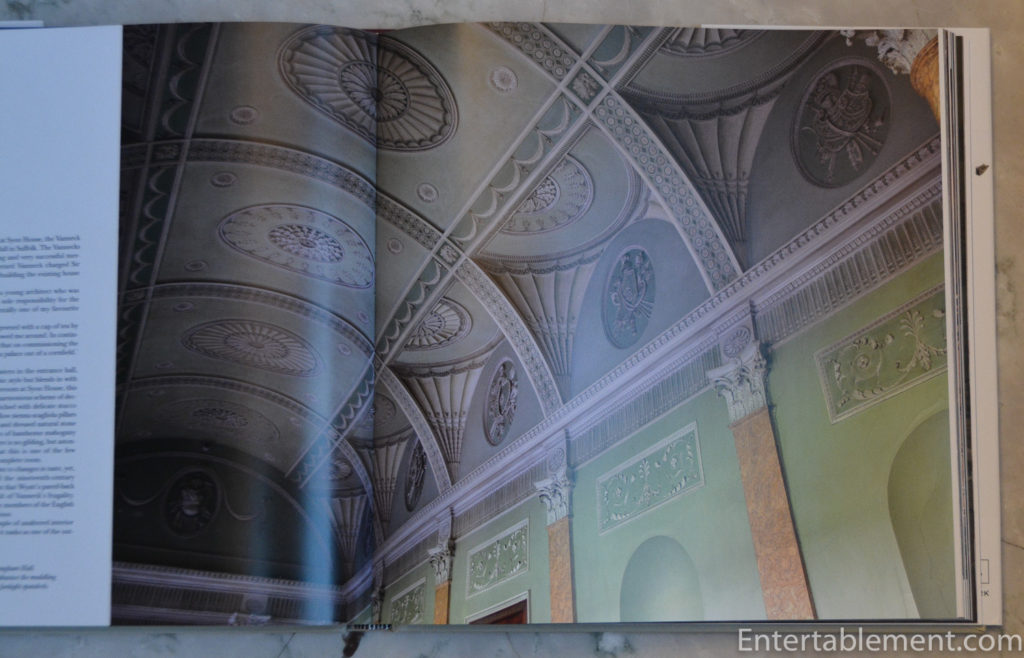 New Wardour Castle has been turned into a block of flats.  Flat 1A, now owned by Jasper Conrad, includes the staircase shown below. 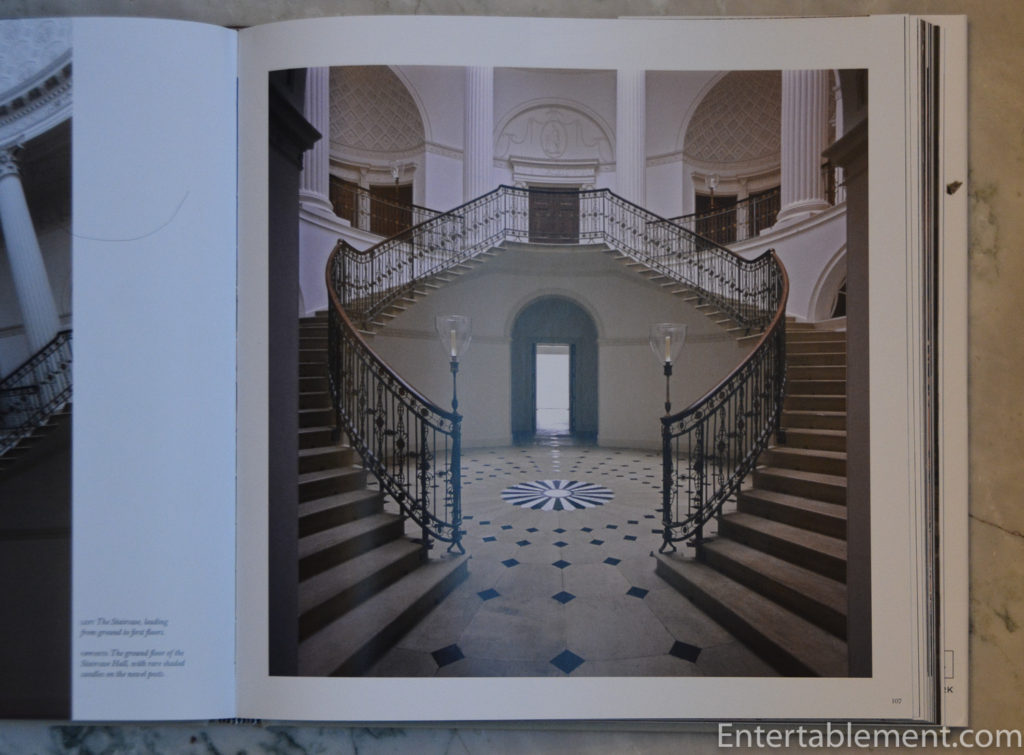 Some of the other houses are open only a few days a year, such as Wilton House and Stratfield Saye (the country house of Admiral Nelson). And those few days just happen to coincide with our upcoming trip in April. Seeing them may well invoke some delicate marital negotiation as neither of them is conveniently located relative to our plans, and I’m already trespassing upon the driver’s good graces with some inconveniently situated cathedrals. Ahem…  Wish me luck!