Managing the Overblown Ego of the Parrot Tulip 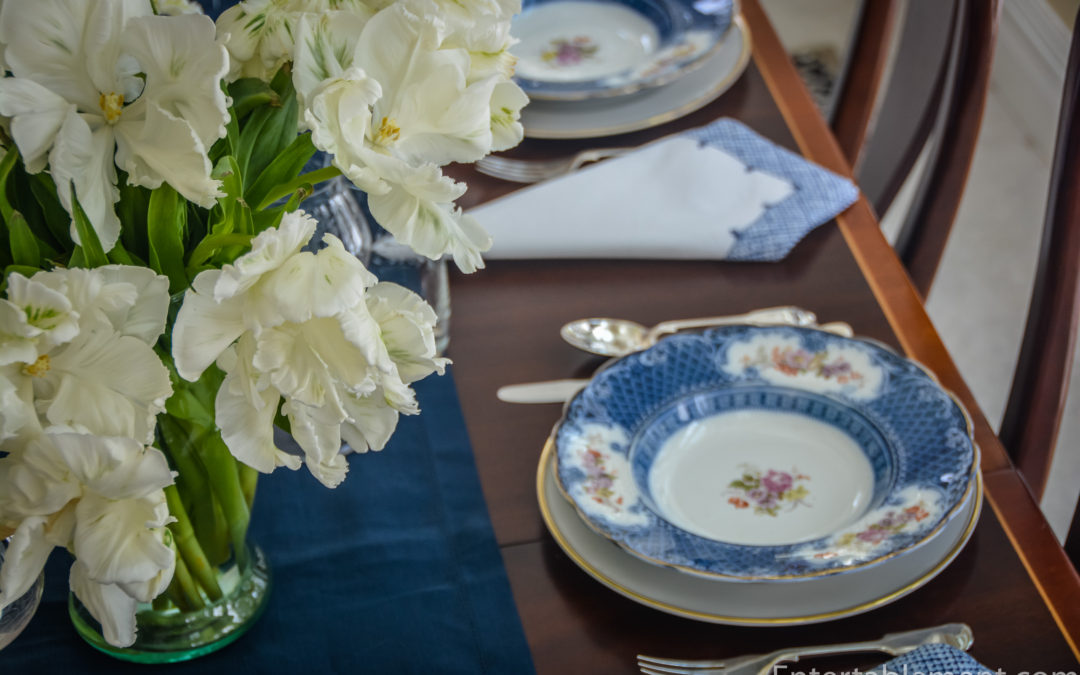 The bouquet of icy white parrot tulips had exploded into a mass of crinoline-like blooms, tossing their elegant heads like a woman emerging from a high-end hair salon. 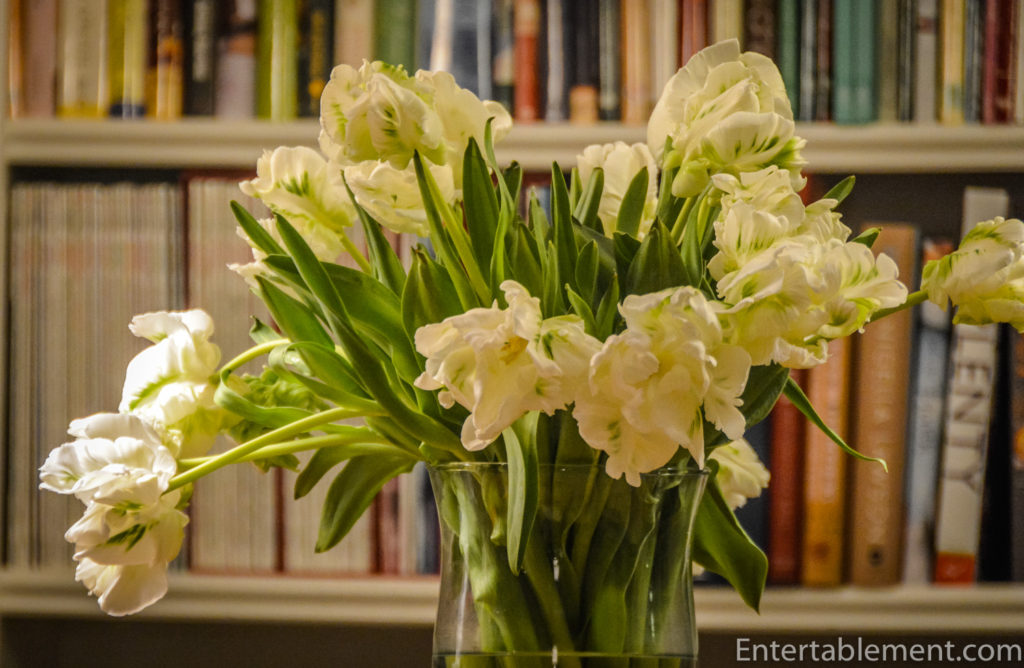 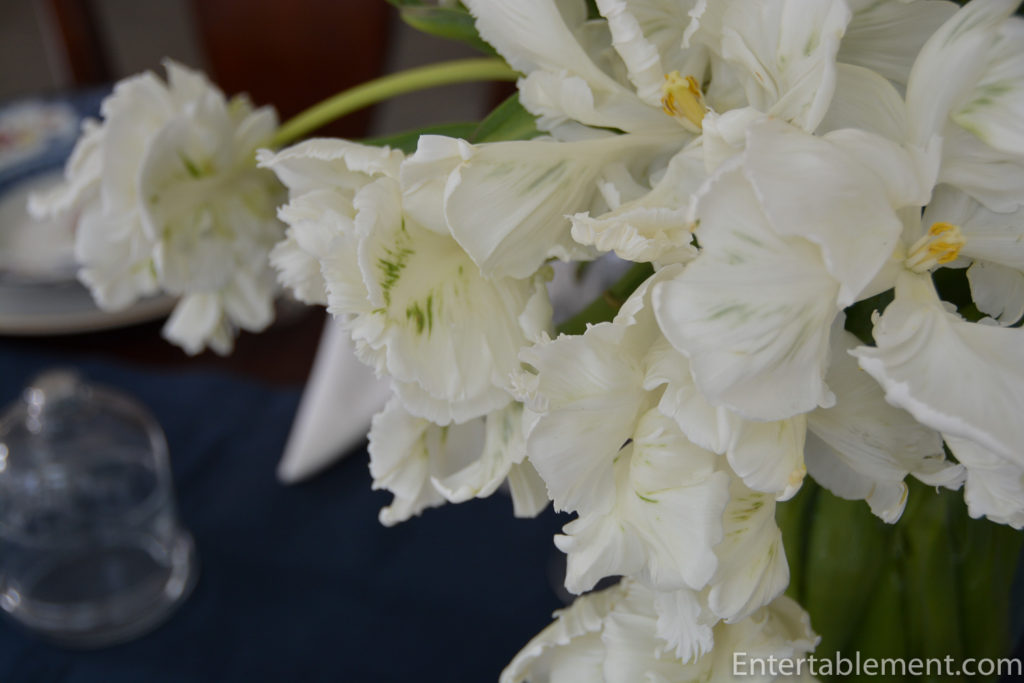 Something had to be done. 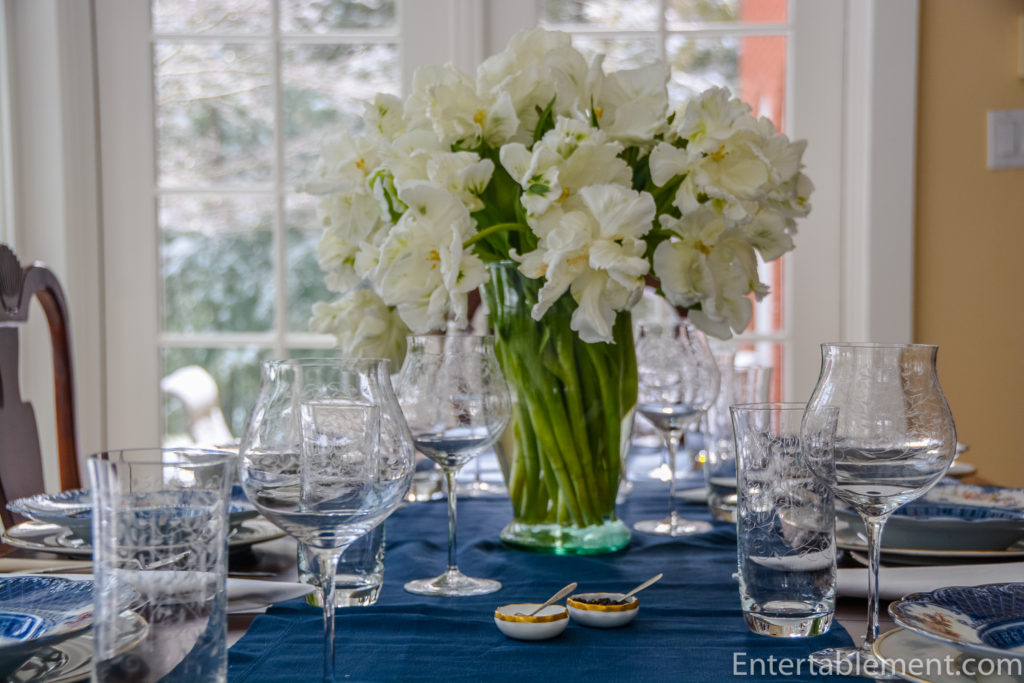 The solution was clearly to surround them with other lovely objects. A table had to be set. Immediately! To heck with Valentine’s Day and its requisite pink and red roses. 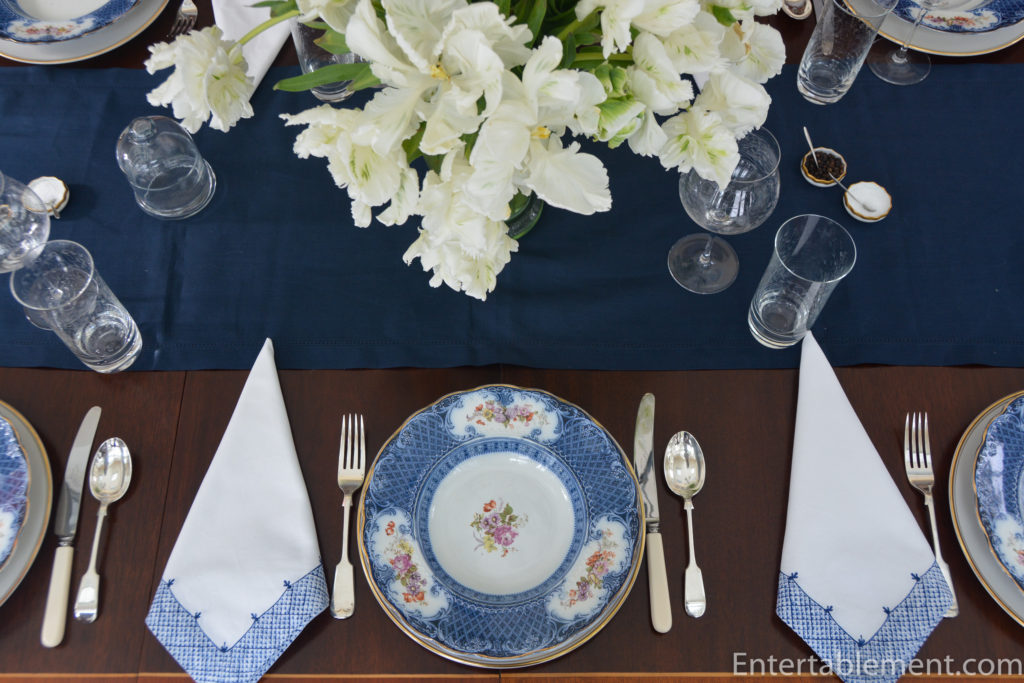 The tulips were not going to be upstaged; their companions had to be equally confident, prepared to stand on their own merits without shouting “look at me”. Strong colours, then. And some subtle pattern. What tableware was up to the task? 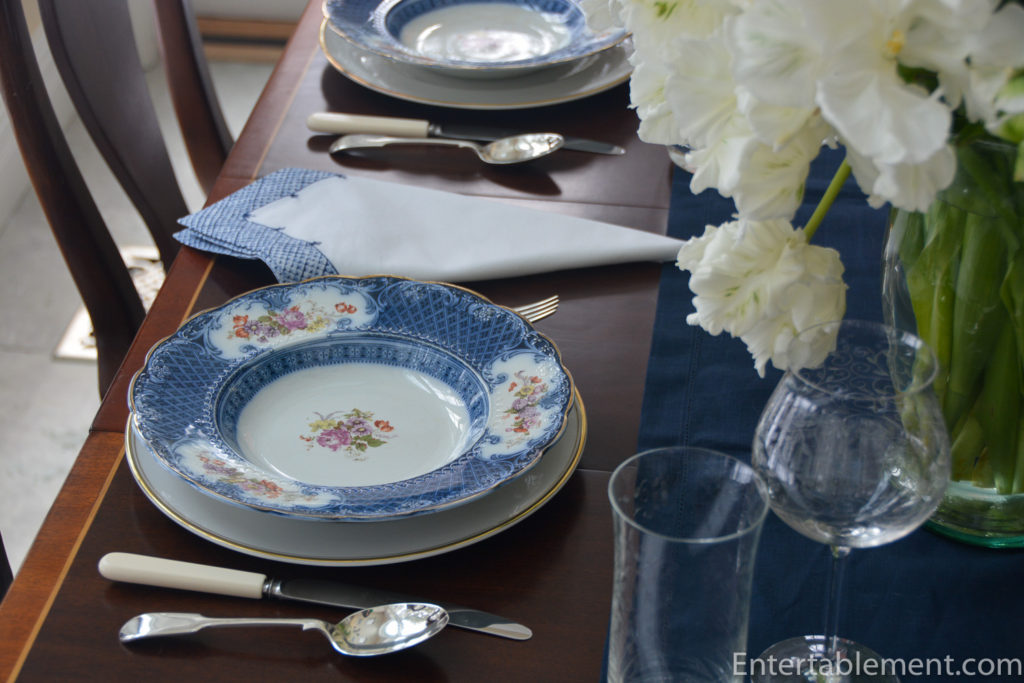 Some vintage soup plates tickled the back of my memory. Where were they? Ah yes, I remember now. There were six of them. 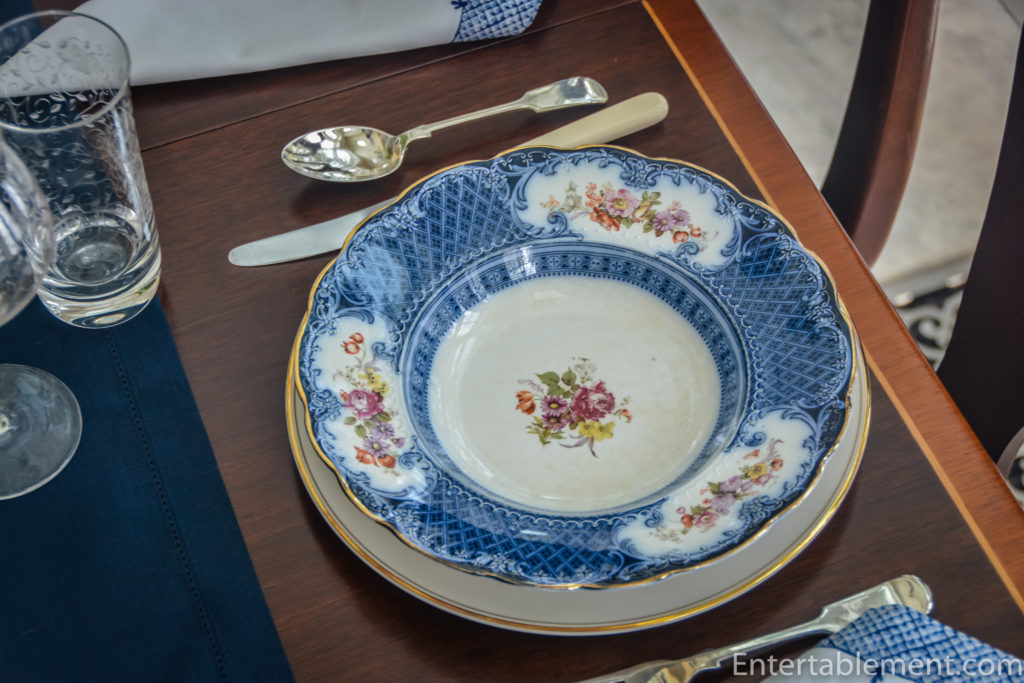 Not very valuable, really rather a poor example of transferware that was almost flow-blue, but somehow, they were just the thing to stand up to those verging-on-overbearing tulips. 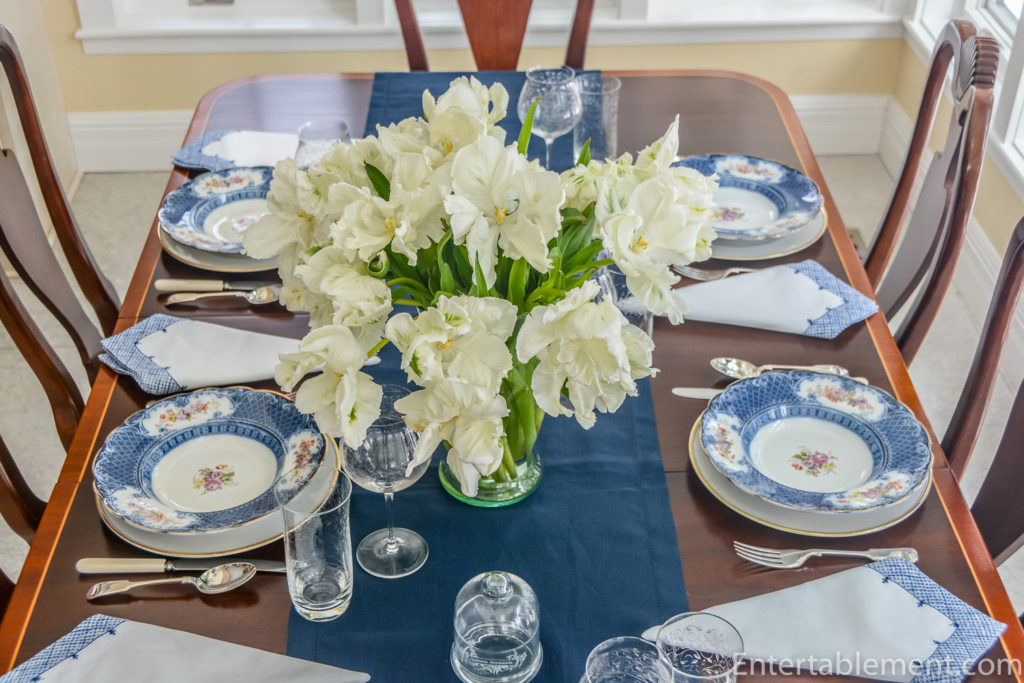 The soup plates were vintage Sevres semi-porcelain; their manufacturer had made a bold attempt to capitalize on the famous name of far-superior wares. 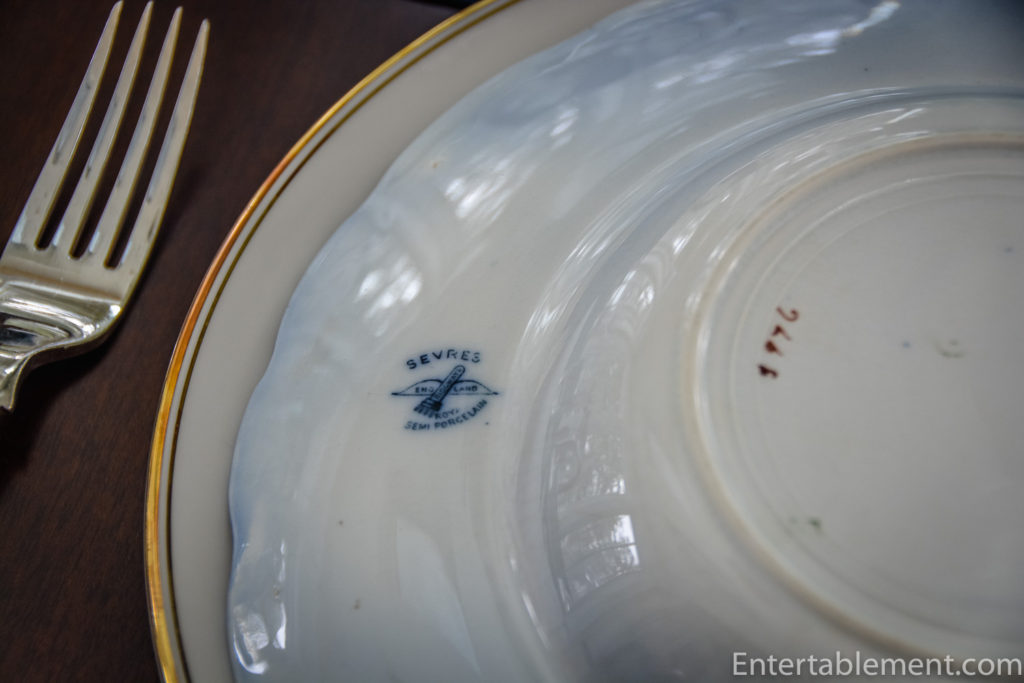 Perhaps this unsubtly false claim to fame is from whence they derived their confidence? 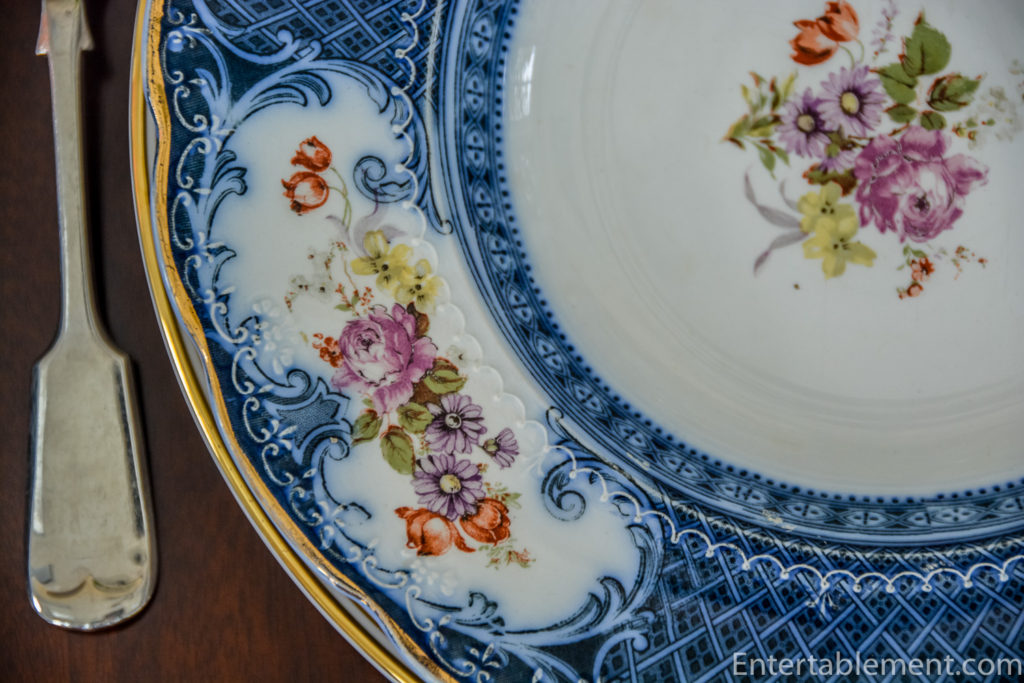 Or was it their appearance? I had not been fooled by the name. But I liked their style. 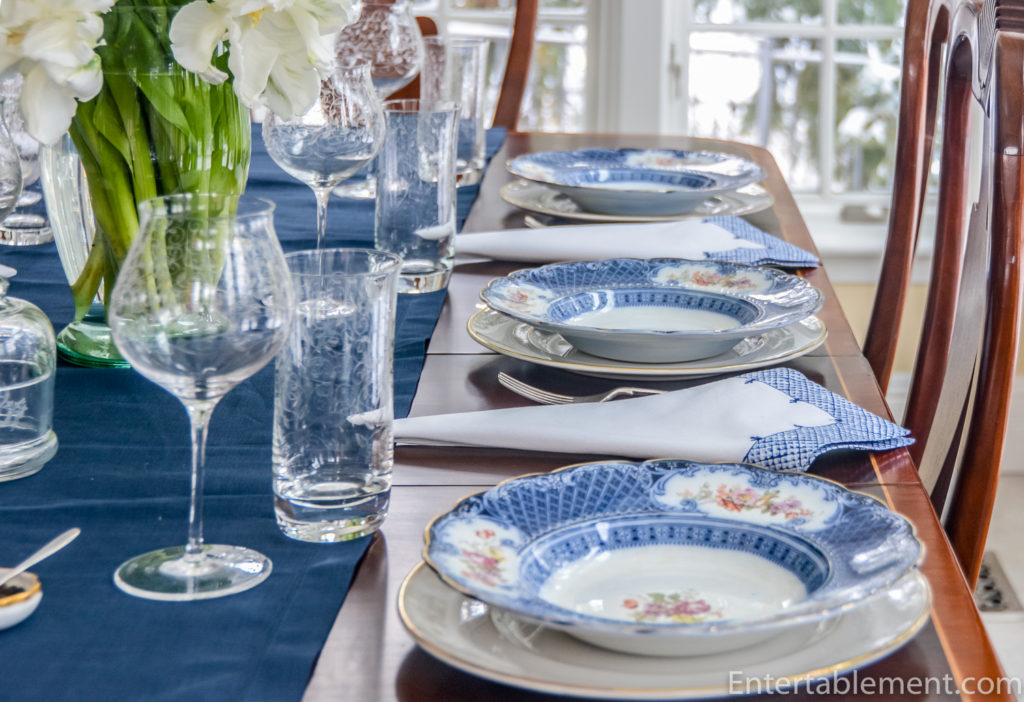 The colours of the flowers were a curious combination – orange, lilac and yellow – adding some subtle oomph without being too bold. And the diamond pattern provided visual texture. 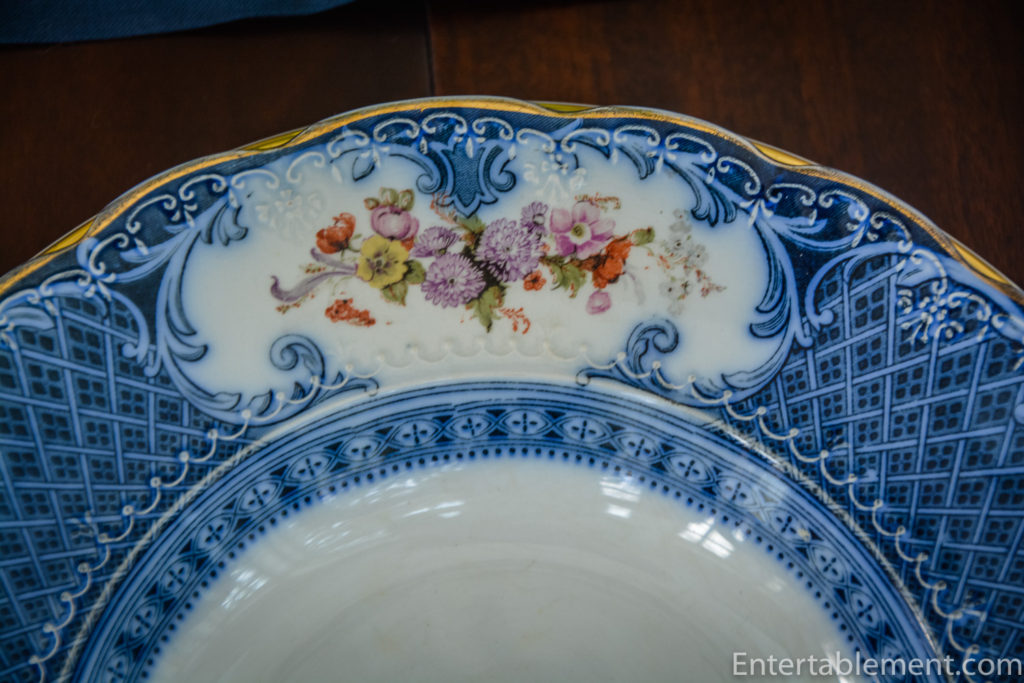 The soup plates glided onto modest dinner plates – Oxford Gold by Royal Doulton; there was already enough ego on this table. 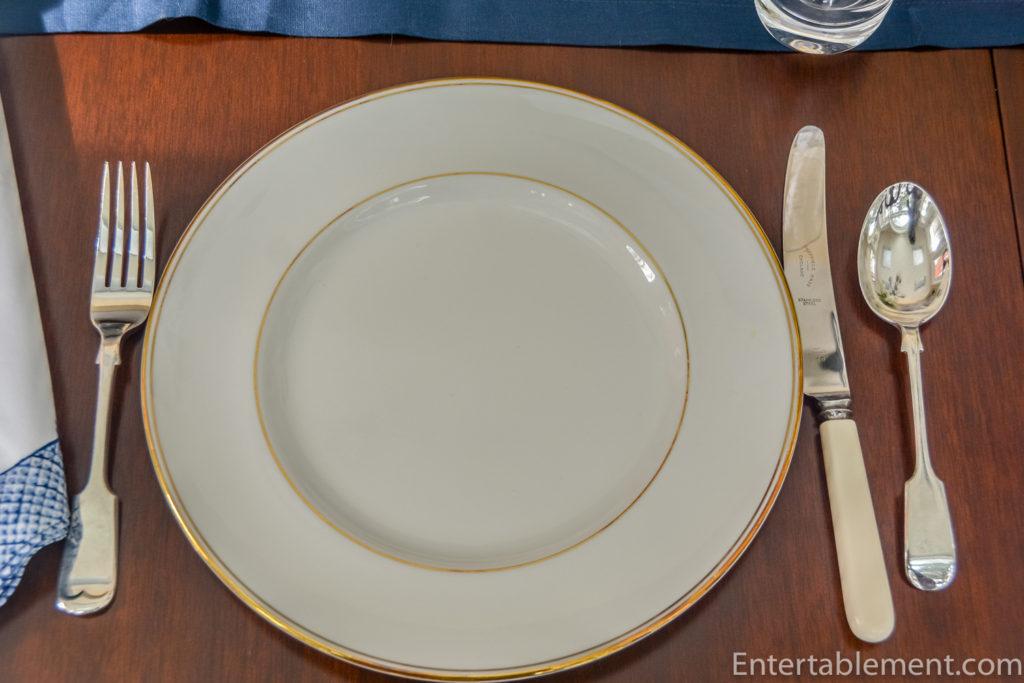 Napkins from Williams Sonoma a few years ago echoed the diamond pattern of the soup plates in happy harmony. 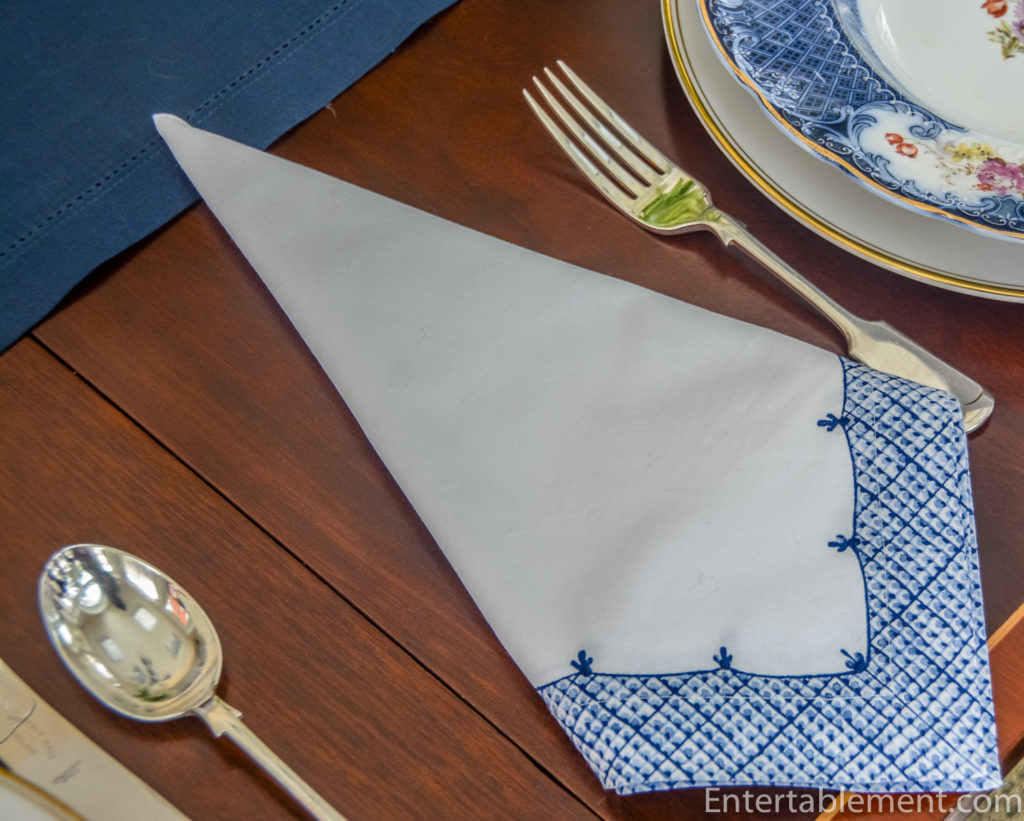 They got along well together – no snubs were issued, no umbrage taken. 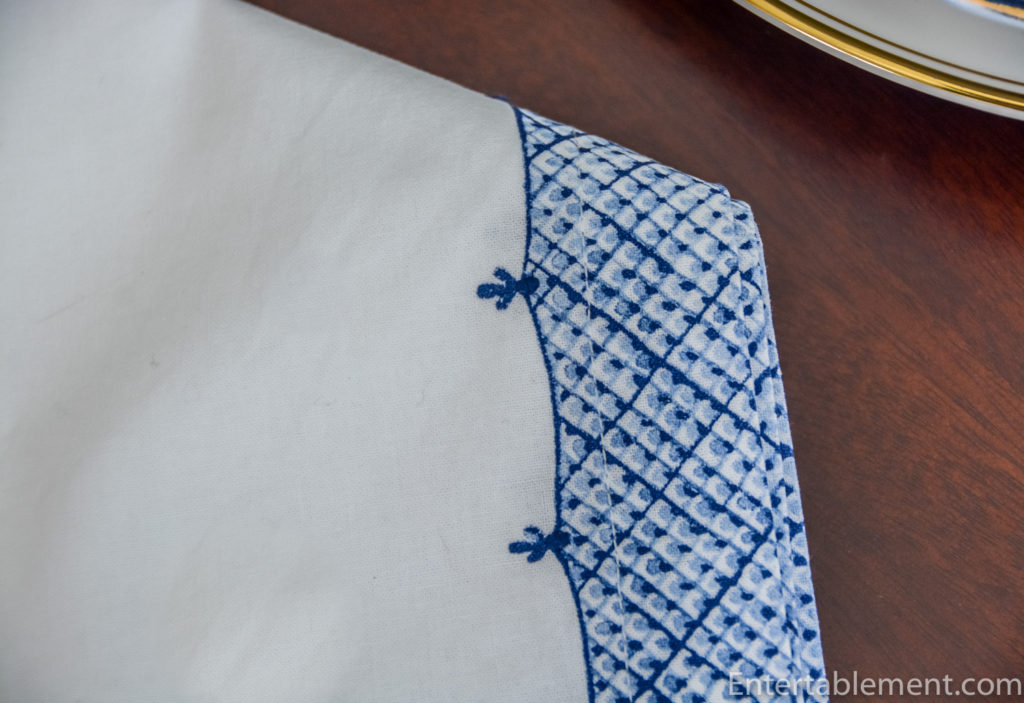 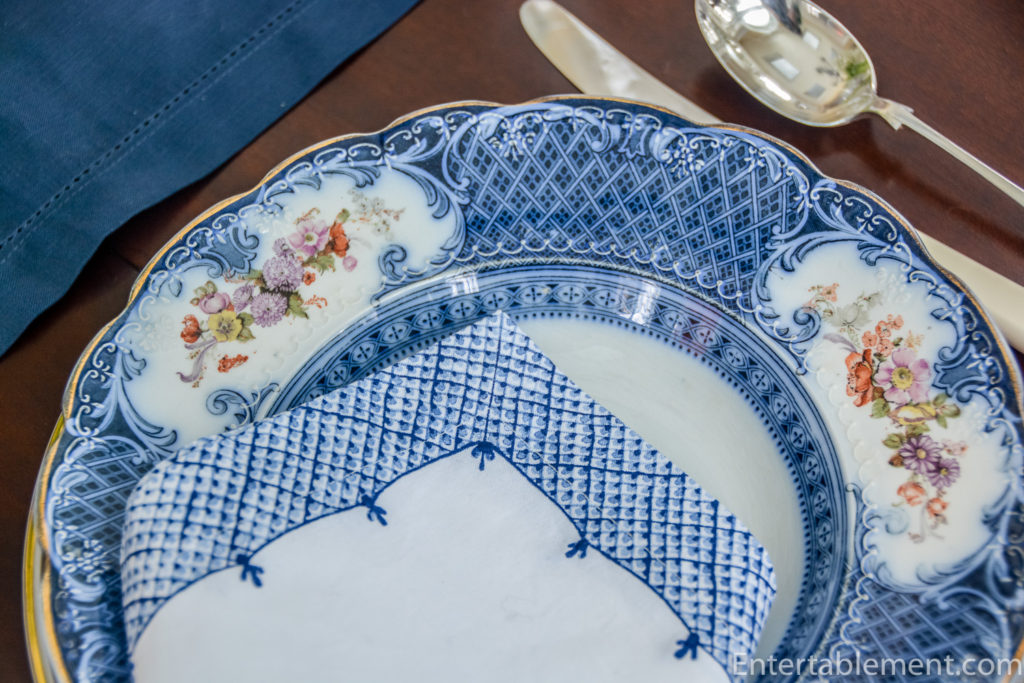 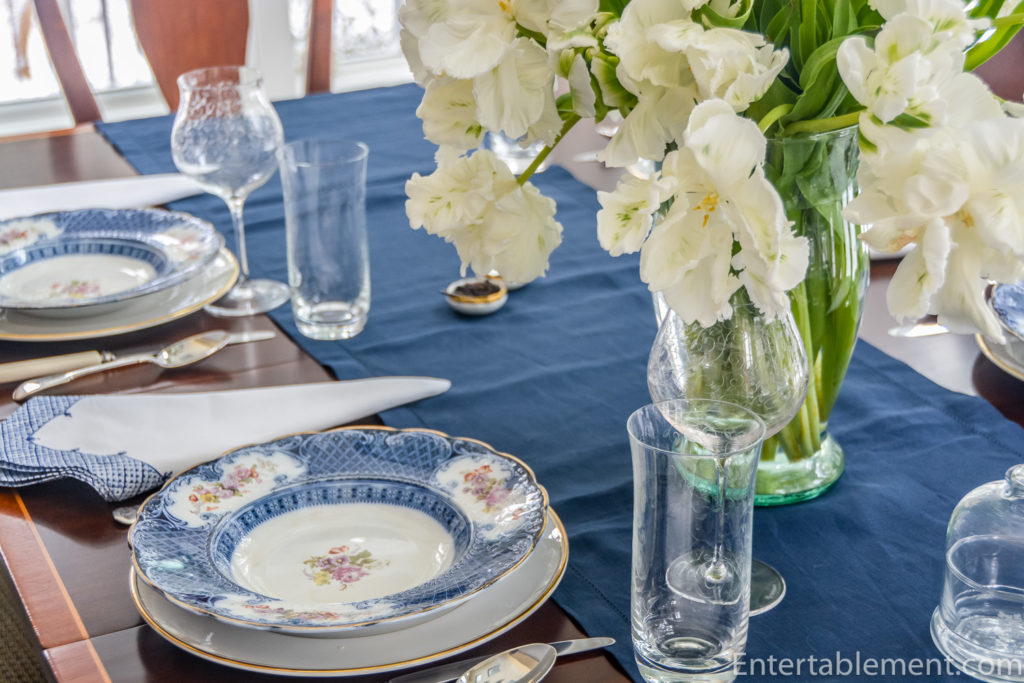 Red Wine and Water Glasses in the Belle Epoque pattern by Nachtmann struck up a conversation with an etched glass covered butter dish and vintage gold-rimmed open salts. 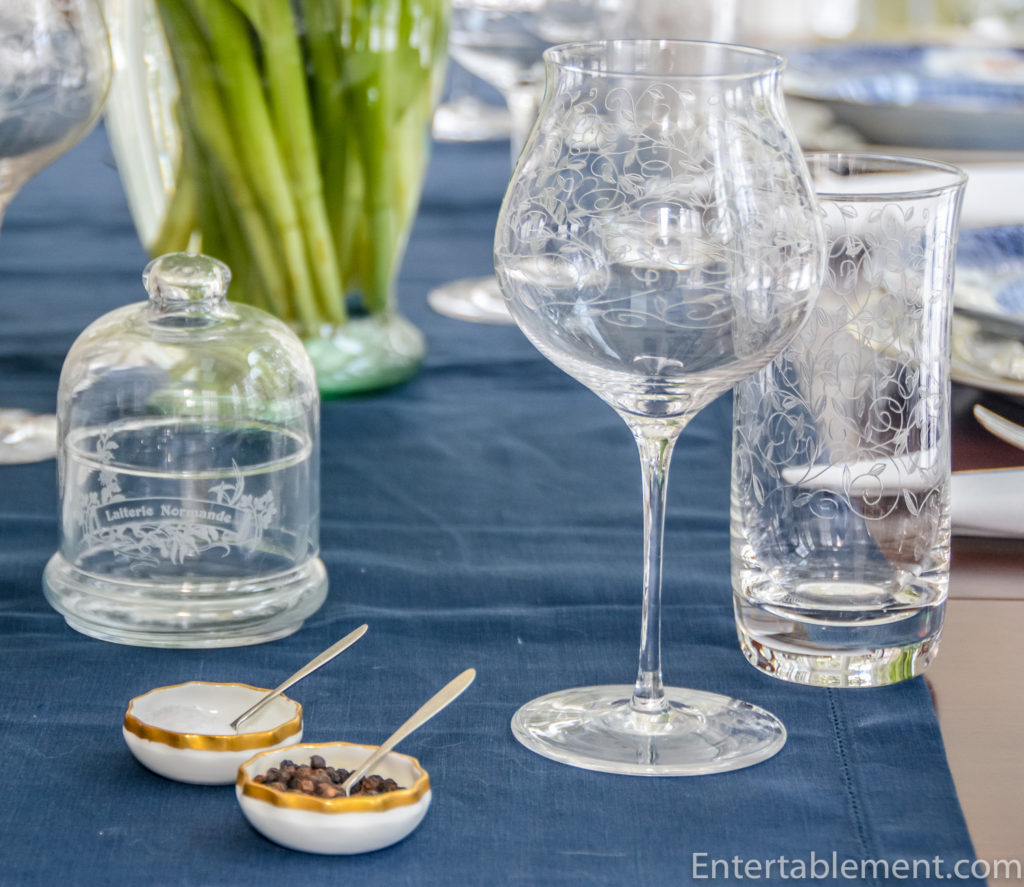 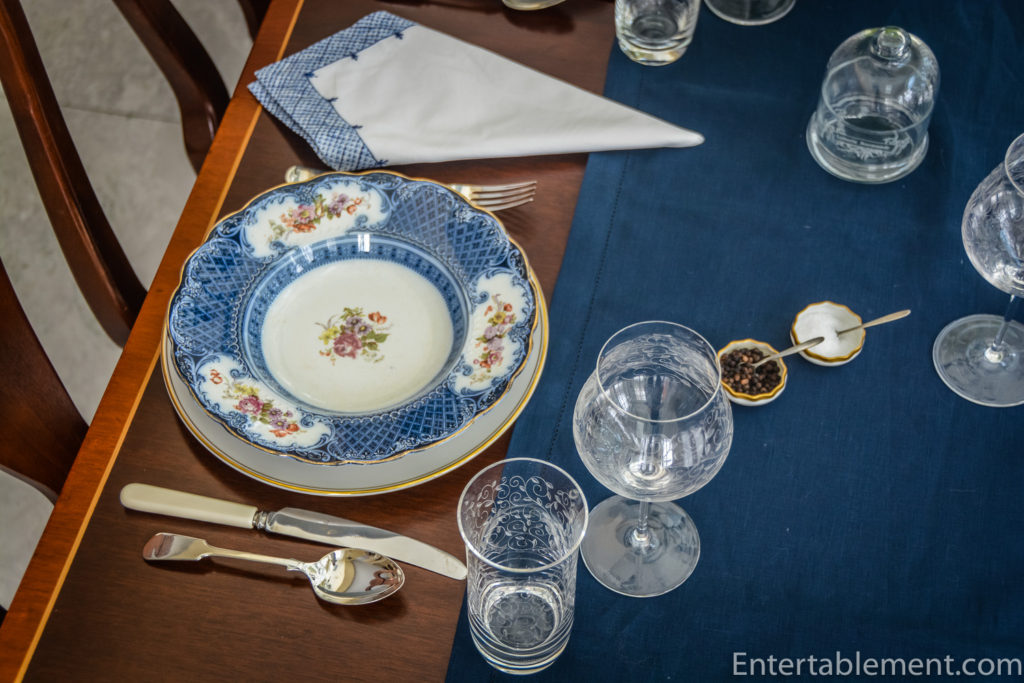 I left all the players to their own devices and got busy with the camera, immortalizing this clash of the Titans in their one-act tableware play. 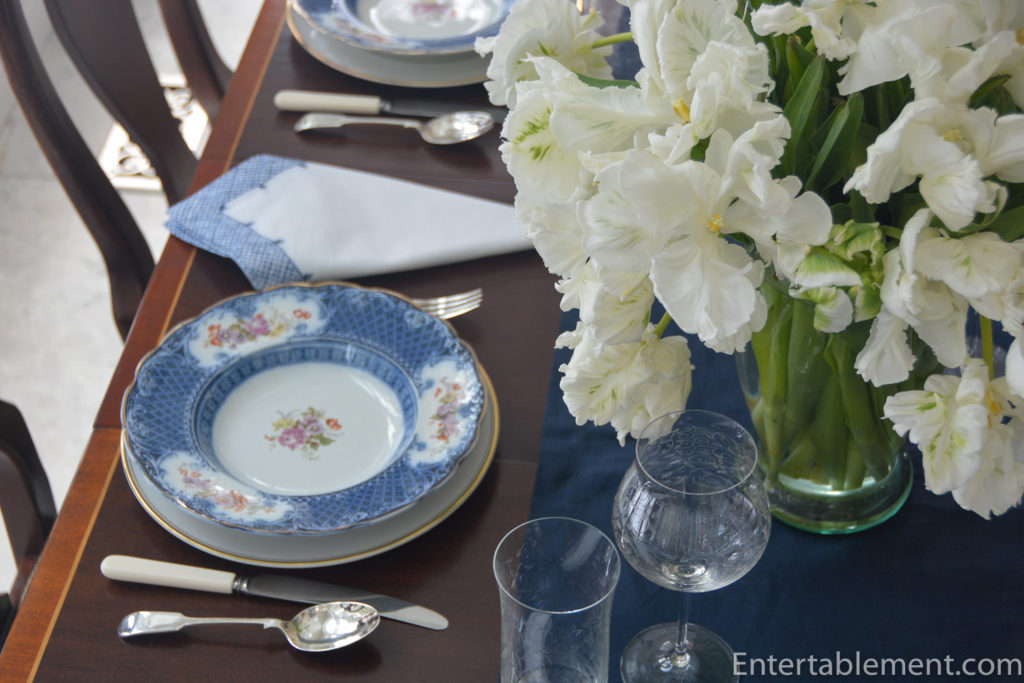 Time to take your final bow, everyone. 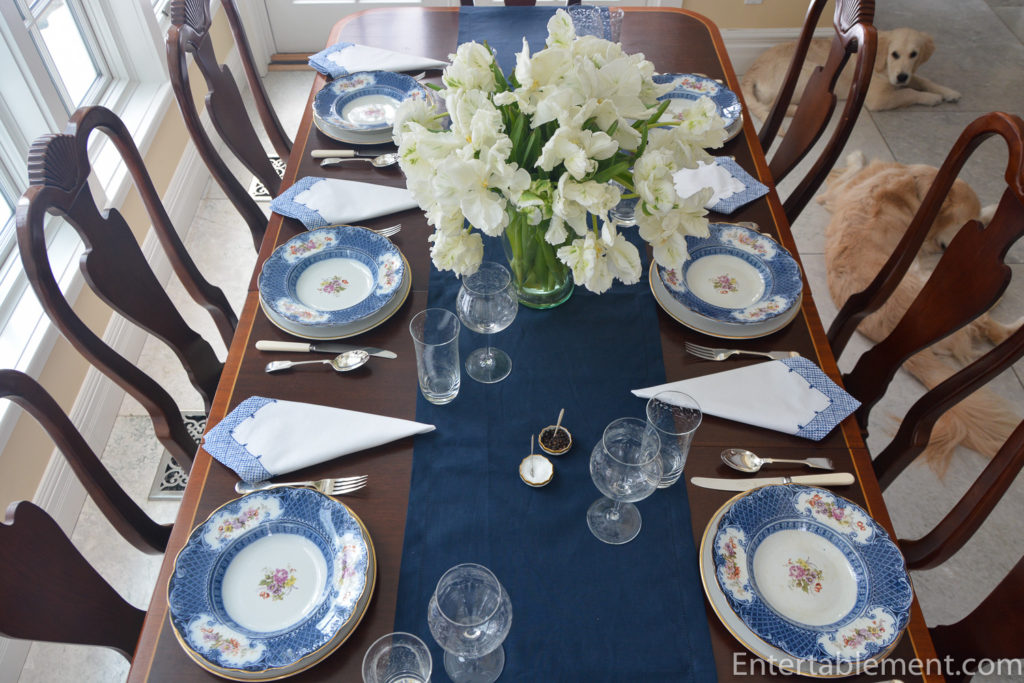 We finish back where we started, with the stunning beauty of the full-blown parrot tulip. 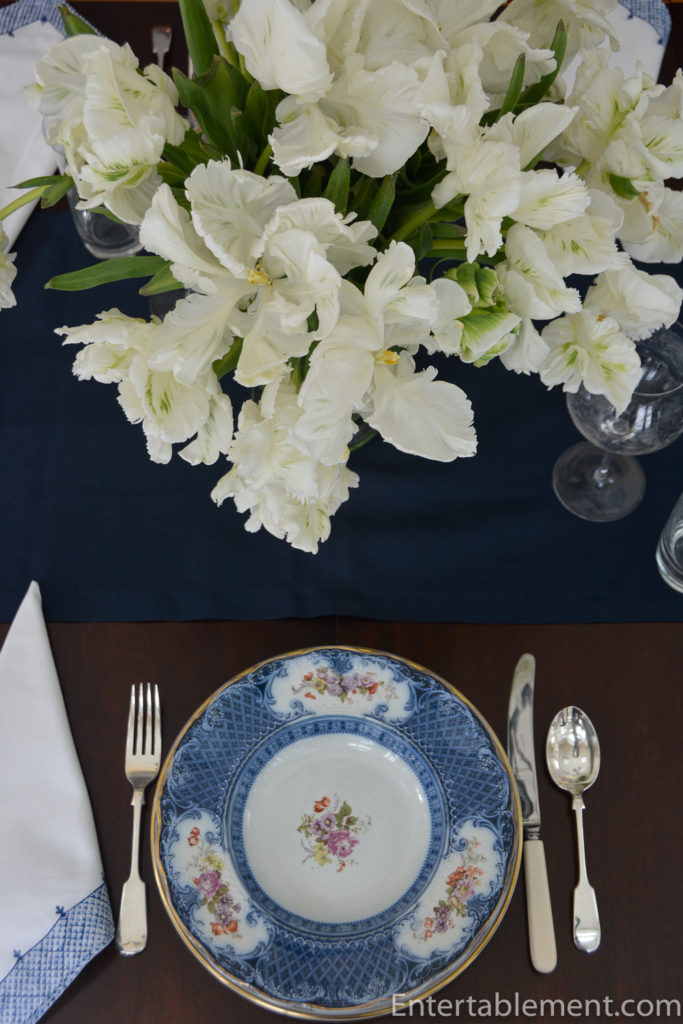 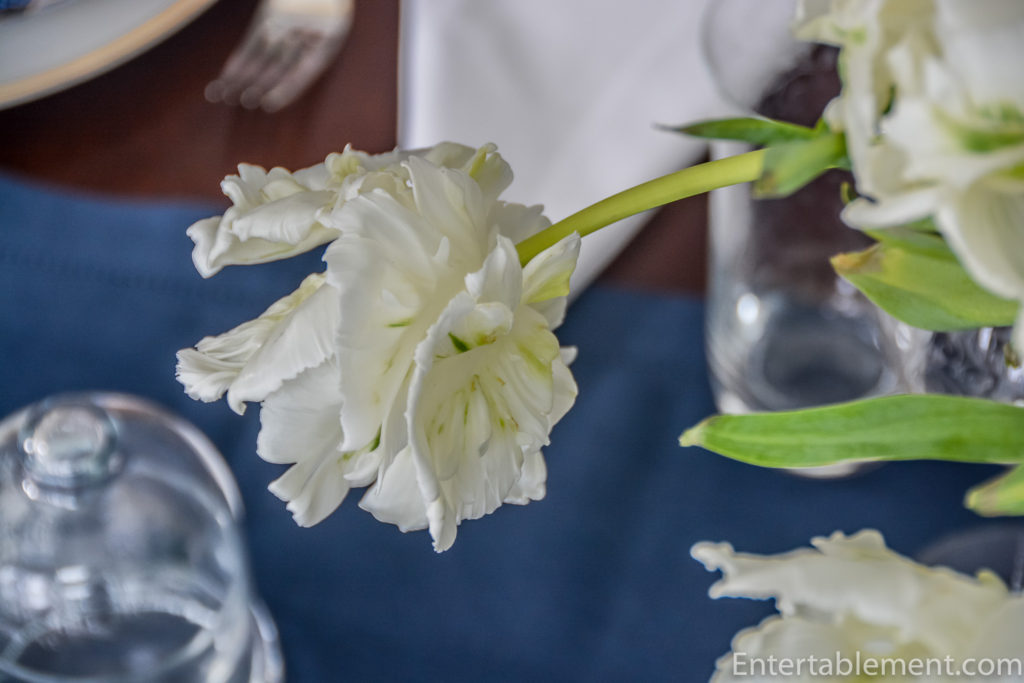