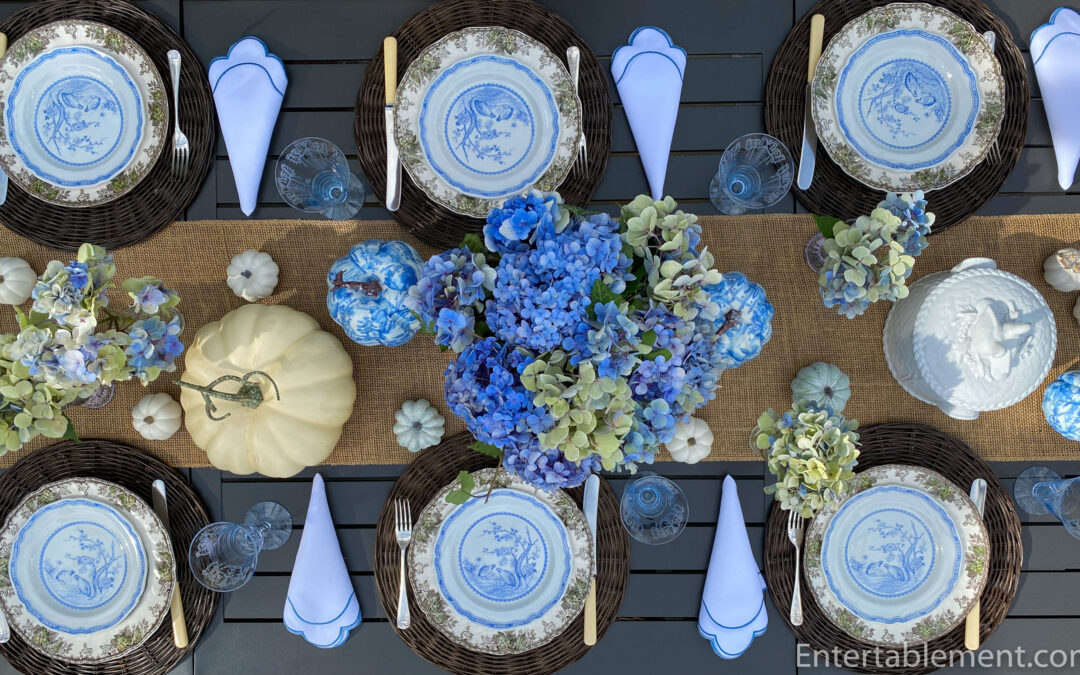 The beguilingly days of fall are with us, with just a touch of crispness in the air. 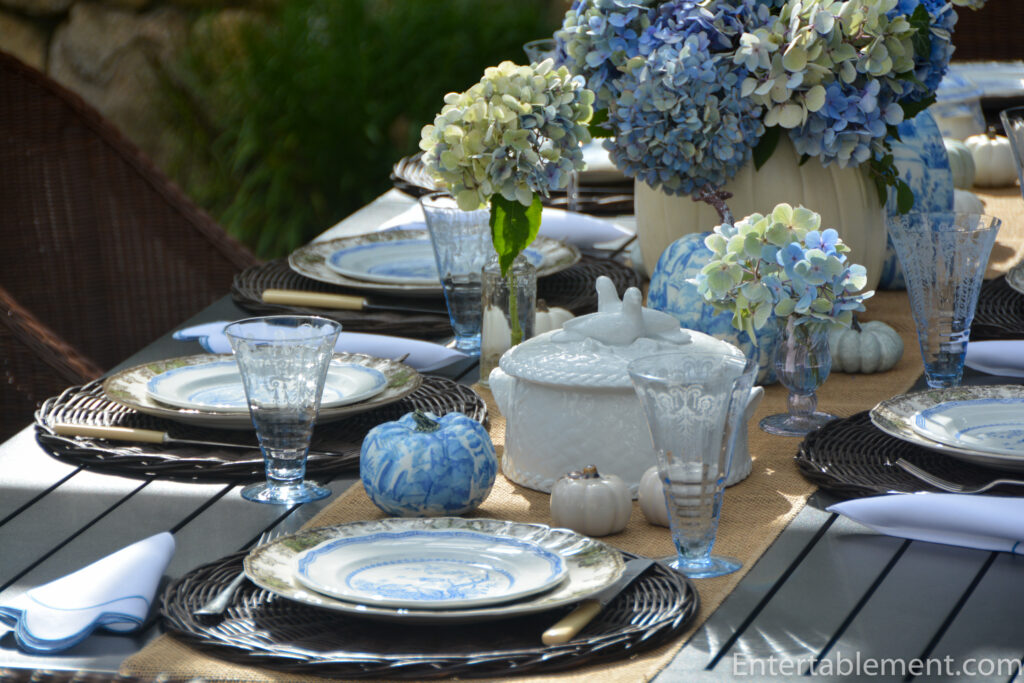 I’m not quite ready to go the complete fall Monty, though. I still have a foot in the summery shades of blue and white, but some brown and white transferware helps bridge the transition. 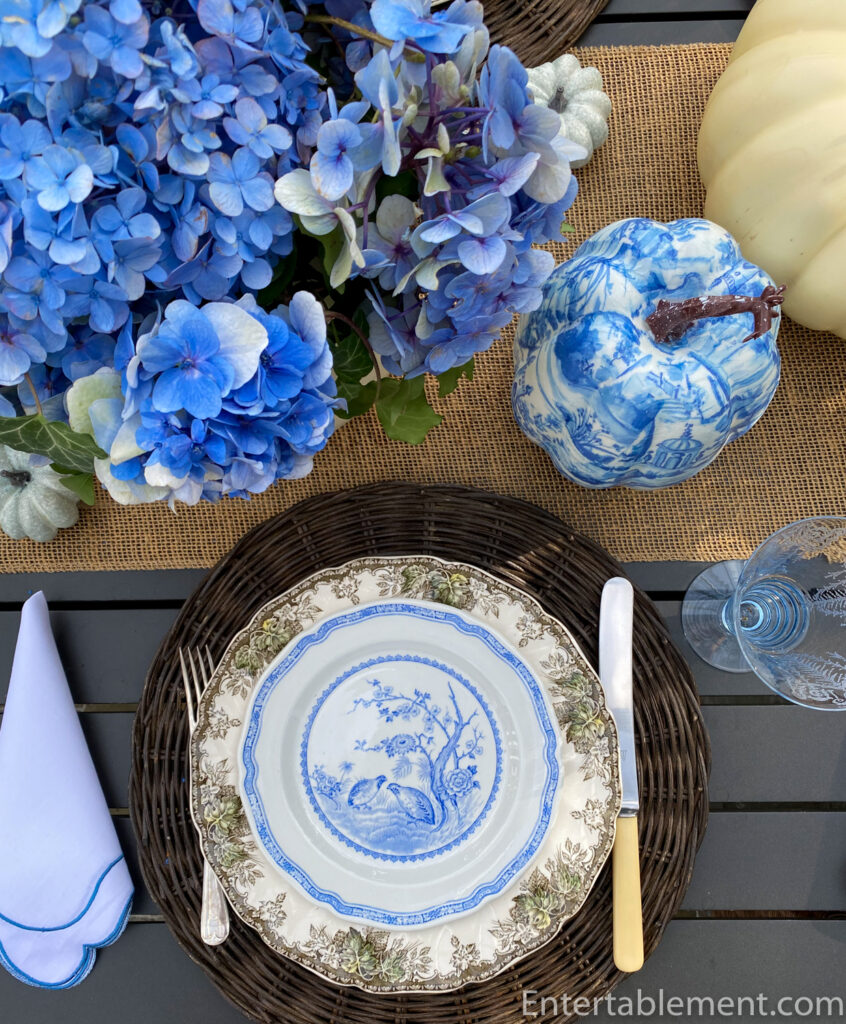 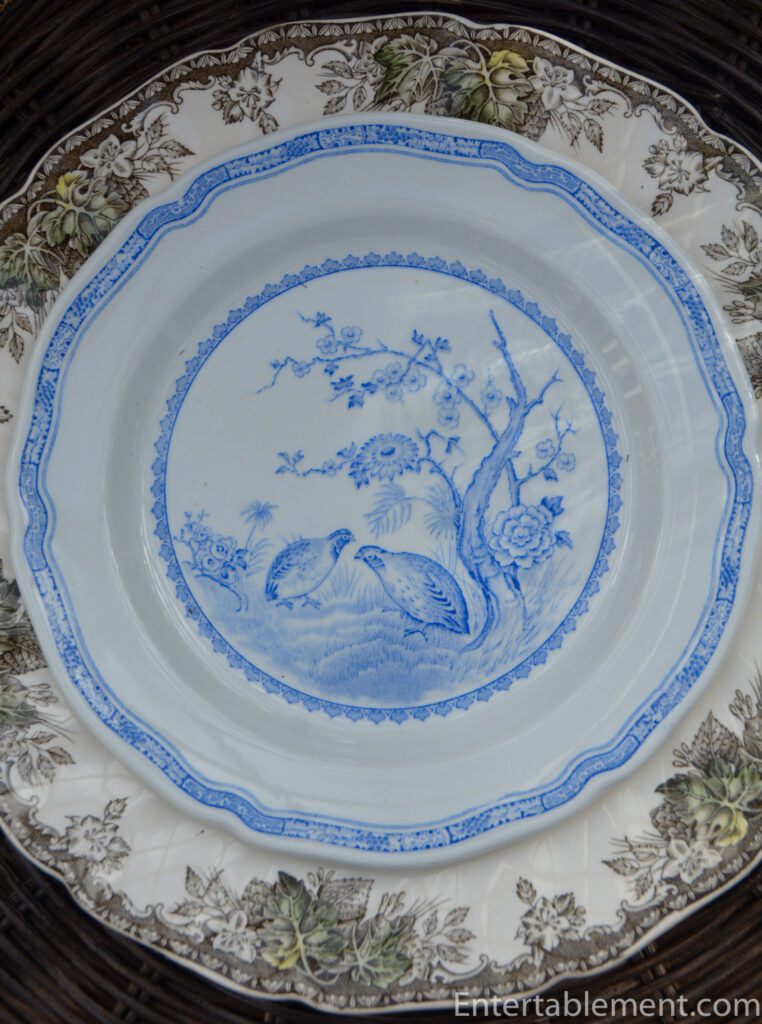 Nikko Blue Hydrangeas have donned their fall attire; their now papery petals are perfect for drying. 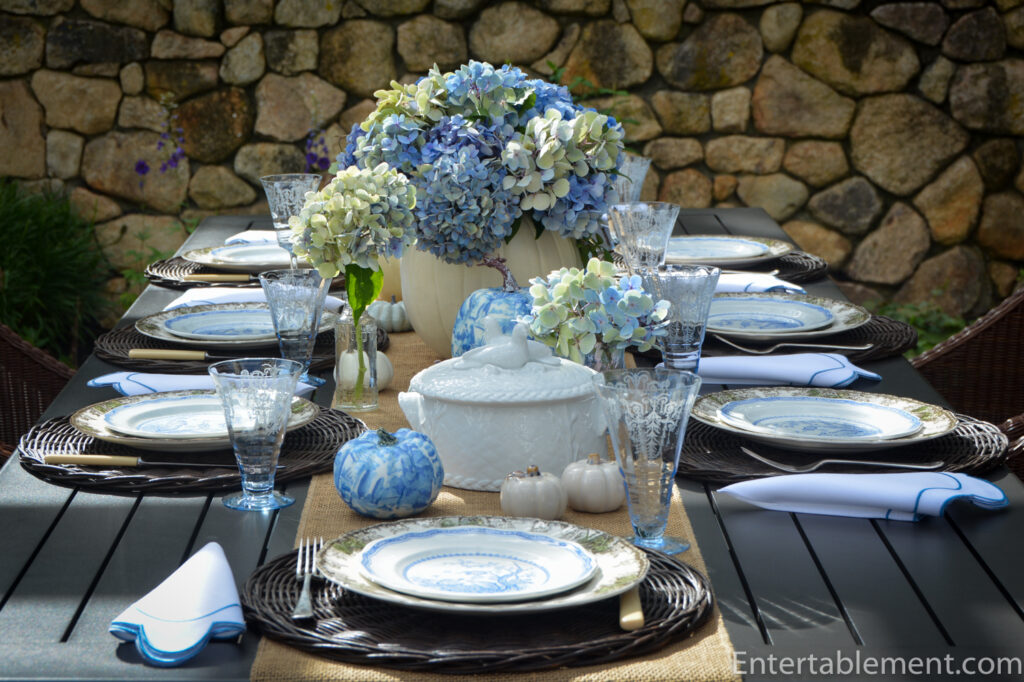 White pumpkins from Joann make stellar centrepieces. The one filled with flowers is an Artificial Carveable Pumpkin (who knew?), currently on sale. I cut out the top as you would with a regular pumpkin, and voila, instant vase. No messing about with a bunch of slimy strands and seeds and no fear of rot setting in. I dropped a cylindrical clear glass vase into the opening to hold the hydrangea stems in place. 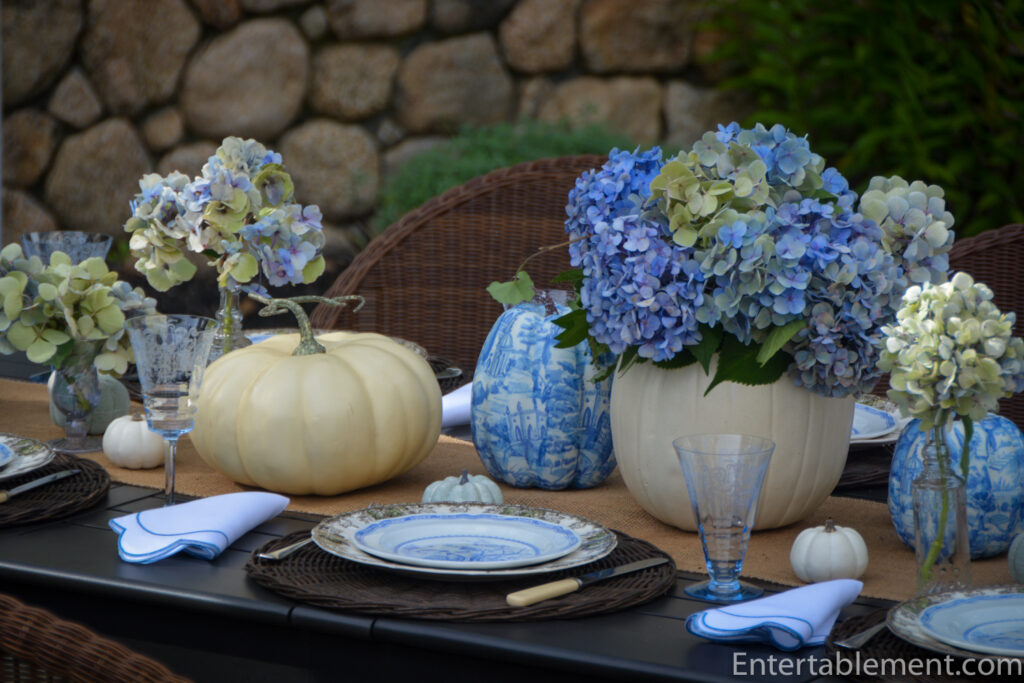 The shorter pumpkin with the handle-shaped stem is the Bloom Room Autumn Fall Harvest Extra Large Pumpkin. I also scattered some Baby Boo white pumpkins from Factory Direct Crafts with some pale blue small pumpkins from Pier 1 a few years ago. 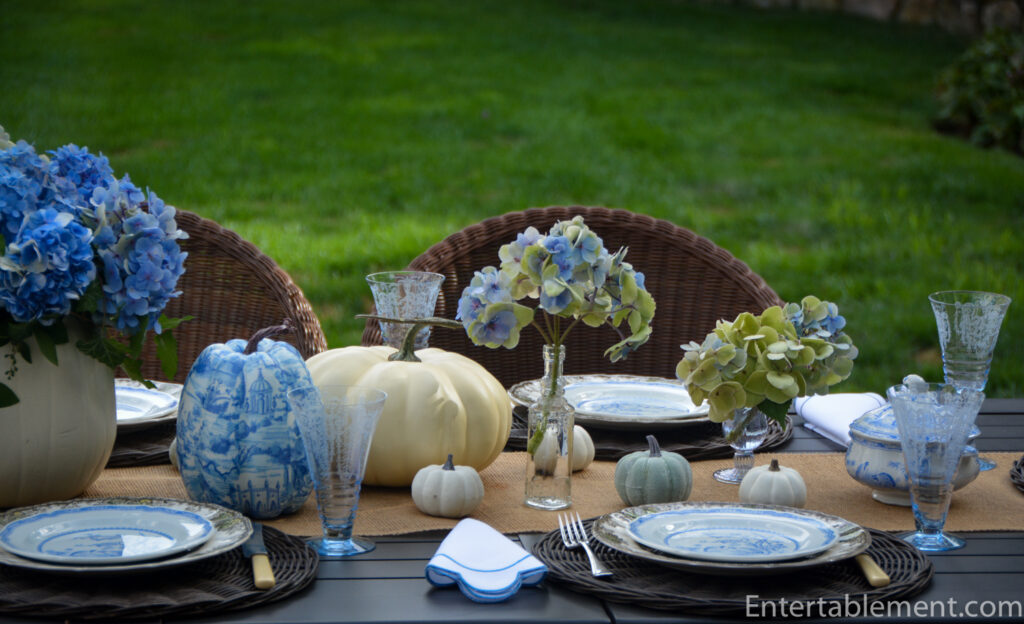 The entire table was inspired by the blue & white chinoiserie pumpkins from Etsy. Unfortunately, the set I bought is sold out, but there are many gorgeous options from which to choose offered by vendors on Etsy.

Update: I bought another pumpkin from the same vendor, Deirdre, from tinybirdvintagecraft, and had a lovely email exchange with Deirdre. The second one is in more traditional colours, and I’ll see what inspiration it brings for later this season, or perhaps next fall. Deirdre tells me the blue pumpkins have been so popular she can’t keep them in stock. But keep checking if you’re interested in either. She’s replenishing stock all the time. 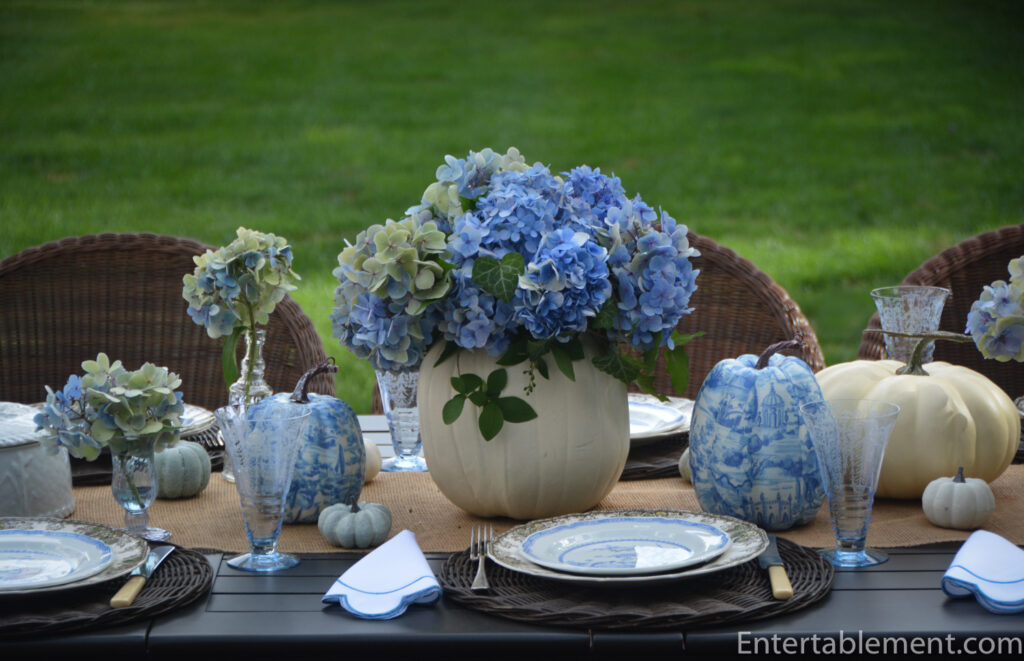 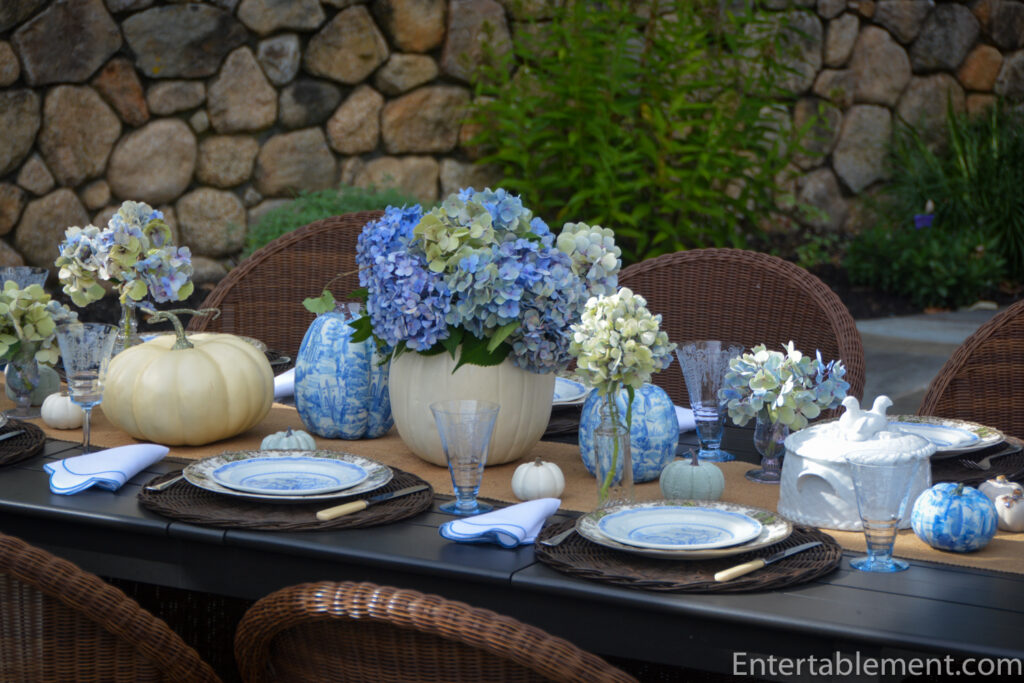 I can never resist a good tureen, either. Since we already had some quail present on Mason’s salad plates, I reached for Royal Worcester’s Gourmet round covered casserole dish. The pattern is from the ’80s and comprises many different serving pieces, as well as embossed plates. 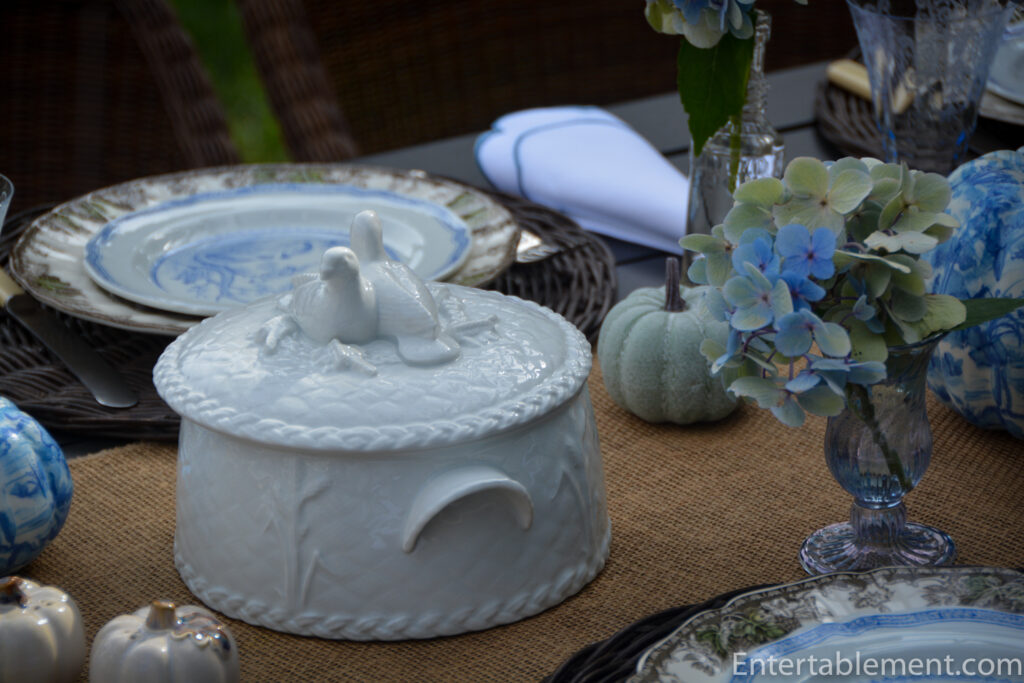 The small lidded compote in Mason’s Quail Blue has a sweet little acorn finial. It’s actually a gravy boat. Unfortunately, mine is missing both the ladle and the underplate, but I love it anyway. 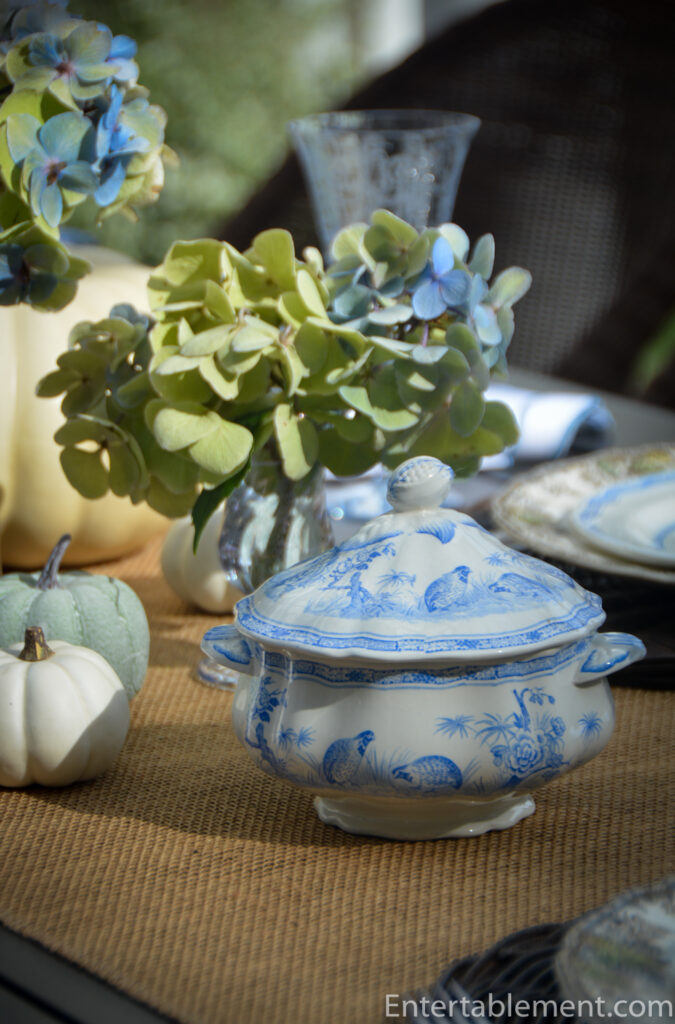 I was eager to use my Cleo Blue Depression glass by Cambridge. 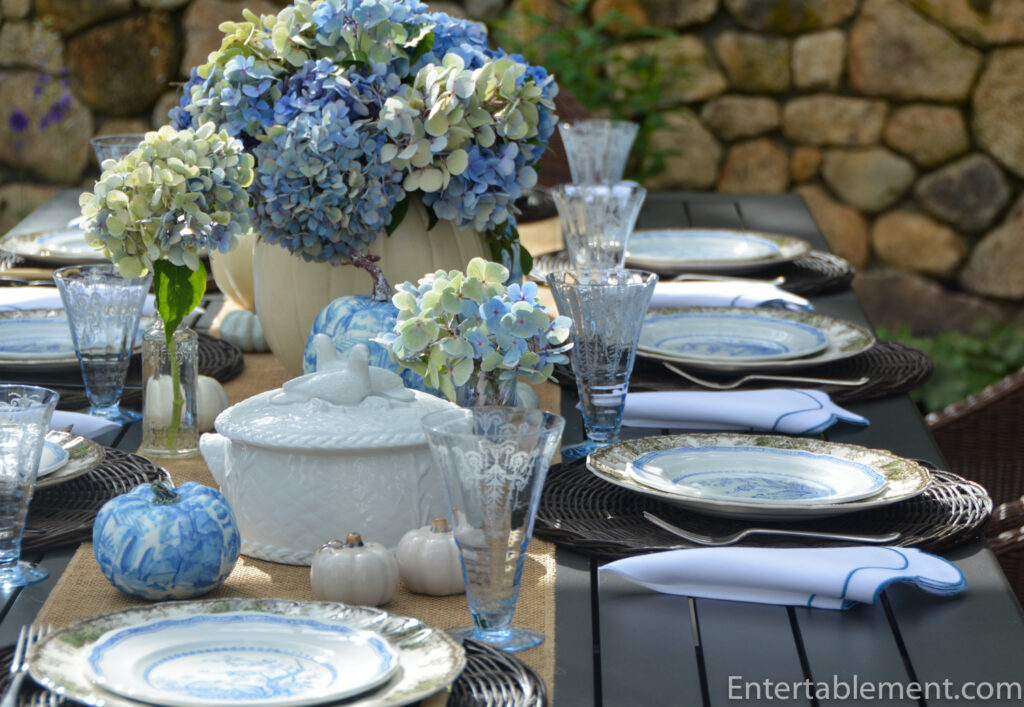 I had to do some mixing and matching, as I have only five of the 8oz footed tumblers, but I have a few of the smaller 4 oz ones and some stemmed water goblets, too. Enough to put together a slightly mismatched table, but it all seemed to work. 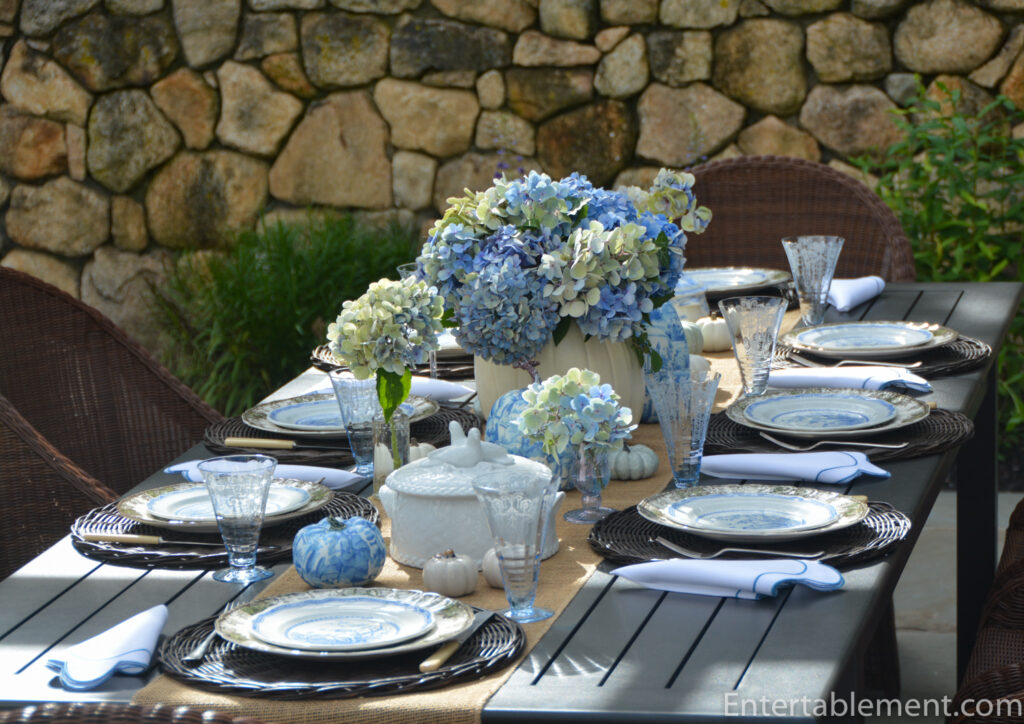 What do you think? Summery-fallish? 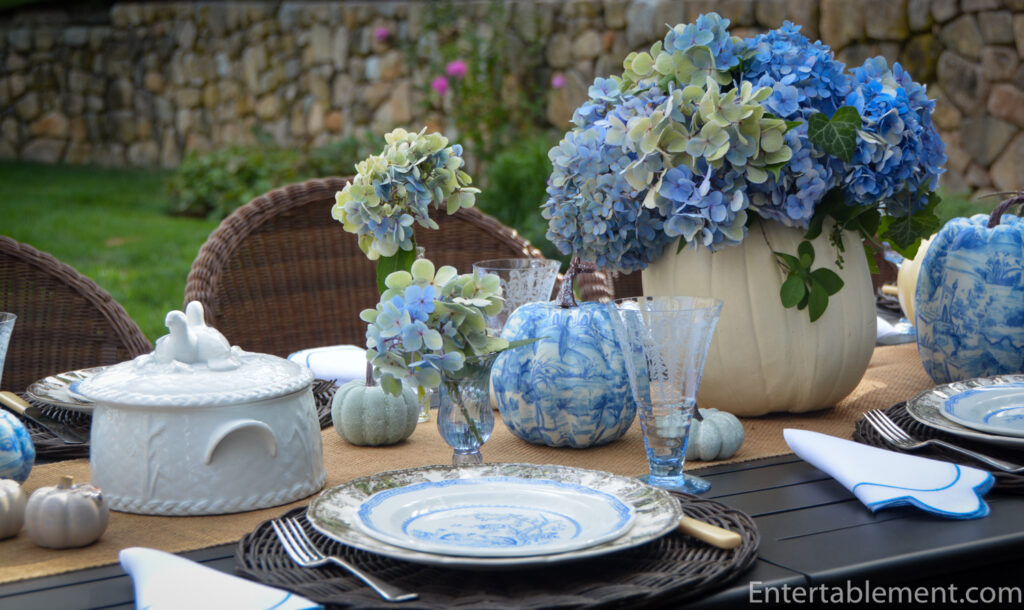 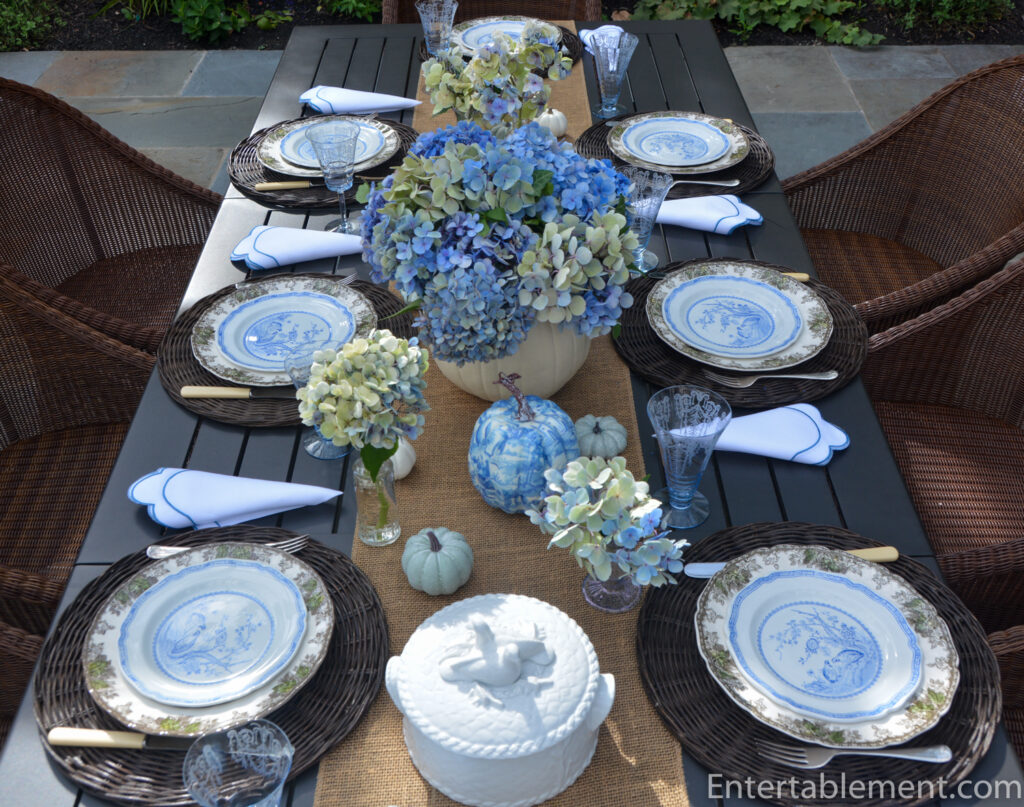 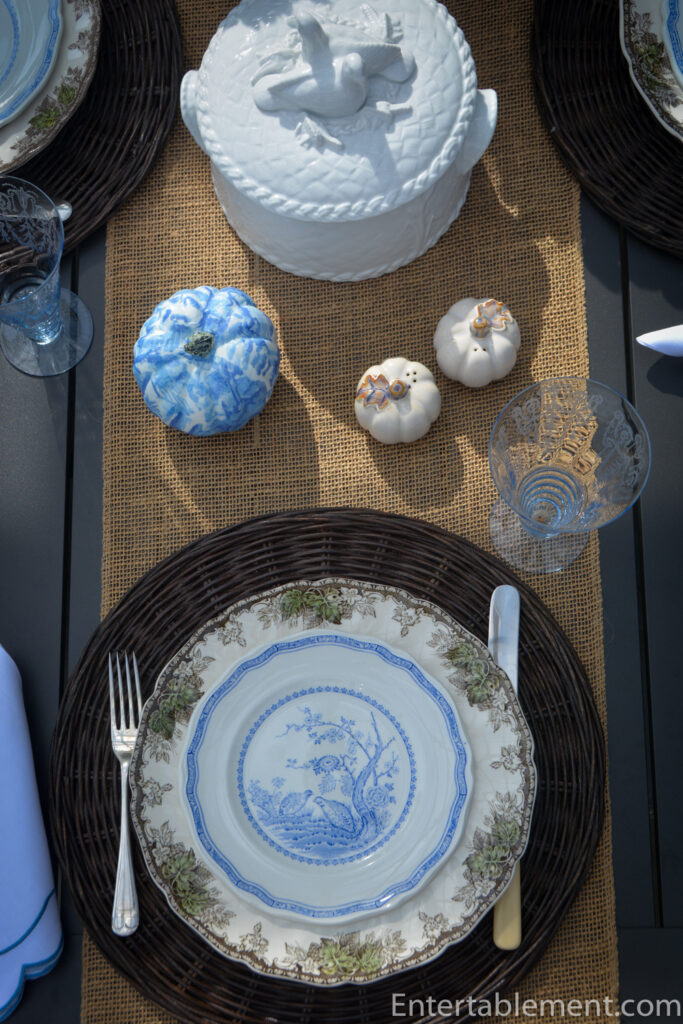 We are now back in Canada. And more or less settled. I’ve dug out my fall sweaters, and the house has been switched to fall decor. The kids have had their final romps in the pool before it gets put to bed next week; to general disgust, Glenn has deflated all the floaties, from mermaids and swans to the inflatable tank daughter Lauren acquired this season. There have been many water battles fought these last few months, and we are all sad to see the fun come to an end–the pool has been a godsend for the kids and grandkids, with limited travel these last months. 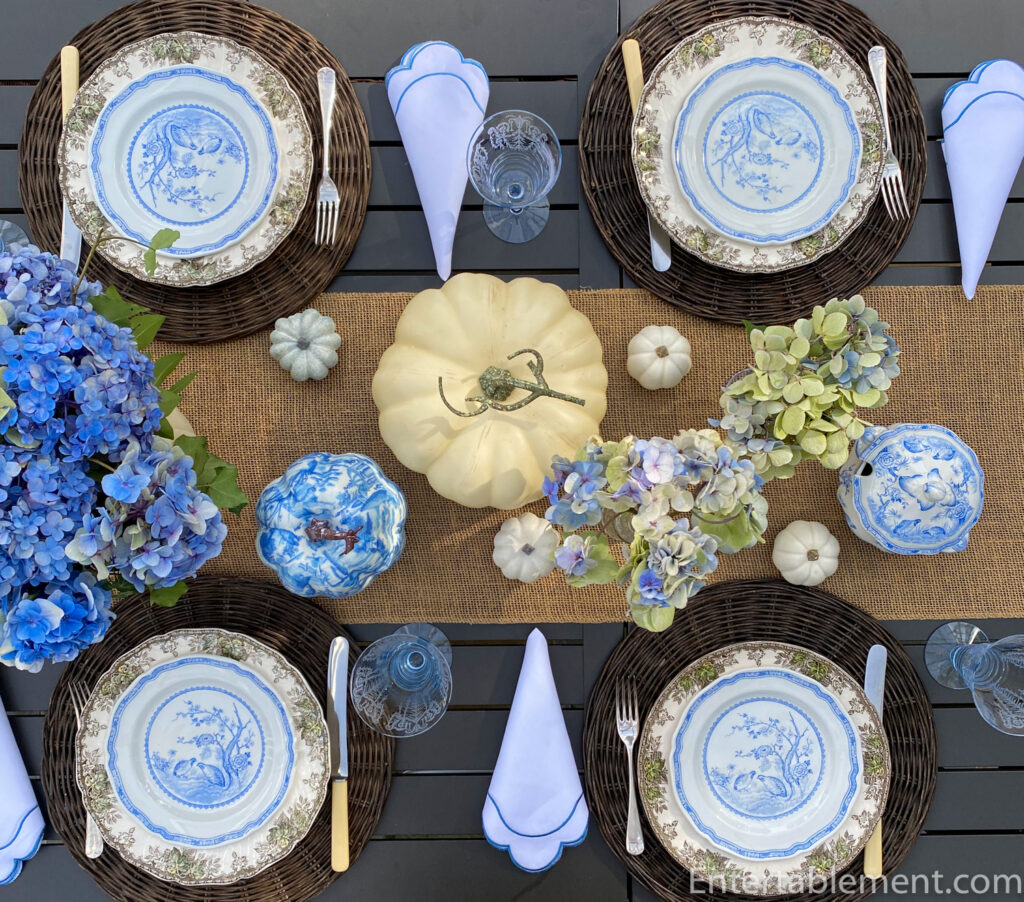 We are planning our Thanksgiving Dinner for next weekend, one week ahead of the official Canadian Thanksgiving. It will also be a combined birthday celebration for the  September/October birthdays, of which there are many in our family. So a mammoth session of Stuffing and cranberry chutney making is on the menu for this coming week. Here’s hoping we have a less adventurous time than last year when the garburetor came loose from its moorings, resulting in Glenn hauling in a car jack from the garage to reattach it. We shall also draw a veil over the soaking I inadvertently gave him…

One last look at the table, and everyone can get back to their day. 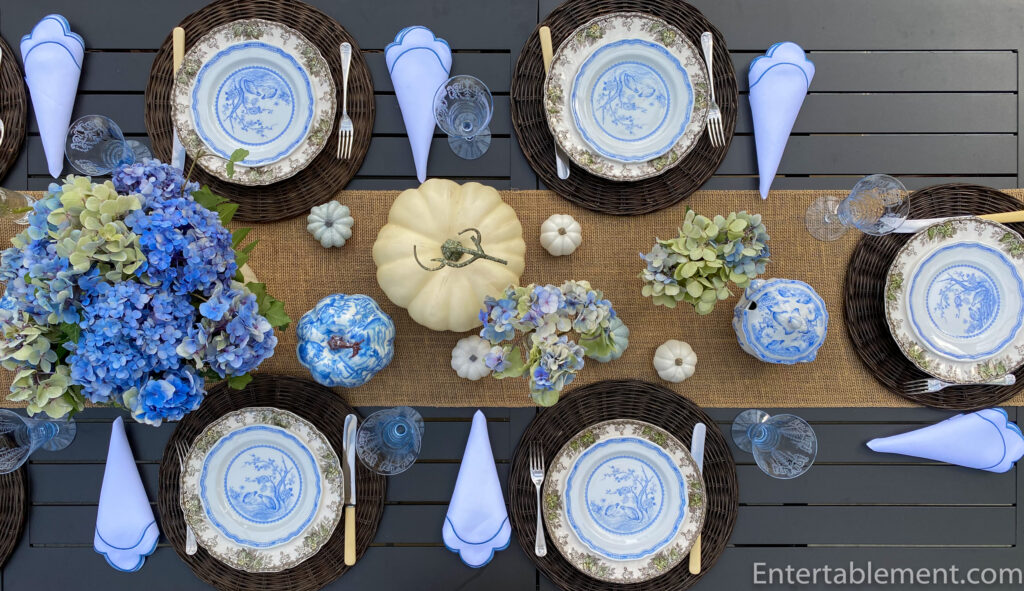 Have a good weekend, all!