Entertablement Abroad: The Family Trip to England and Scotland 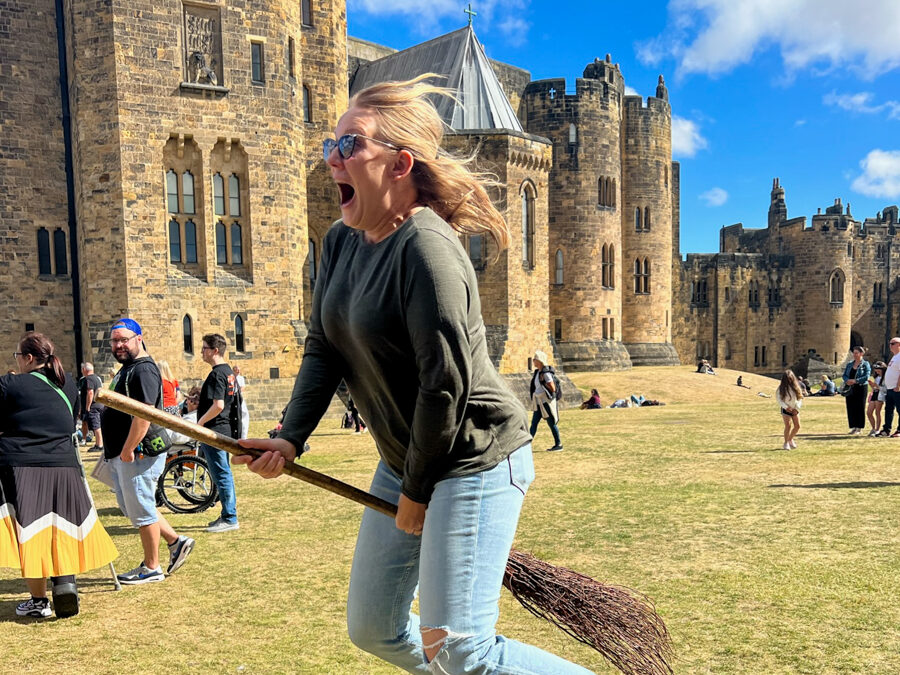 The Big Family Trip has been long in the planning. Originally on the docket for 2020 (sigh), it was pushed out to 2022 so as not to overlap with the Clans and Castles train journey Glenn, and I had booked for 2021 to celebrate our respective significant birthdays (you know, the kind ending with a 0). 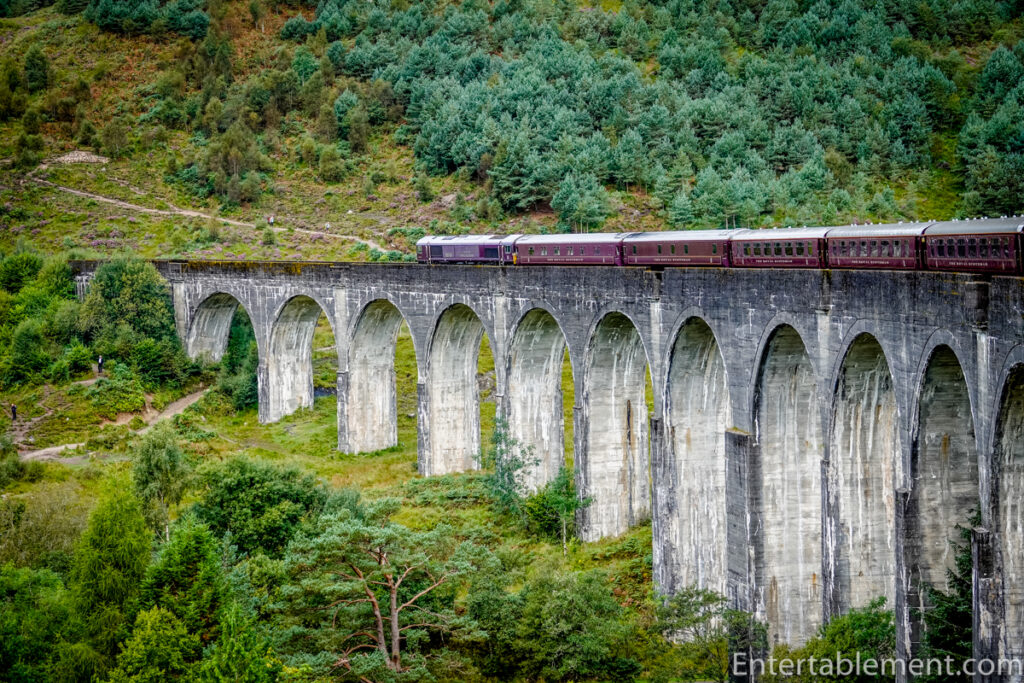 But the best-laid plans gang aft agley, as Robbie Burns said. The 2021 plans didn’t come off, and we ended up combining the two trips—Clans and Castles got tacked onto the end of the family trip—a splendid way to finish up an extra-long time in the British Isles. 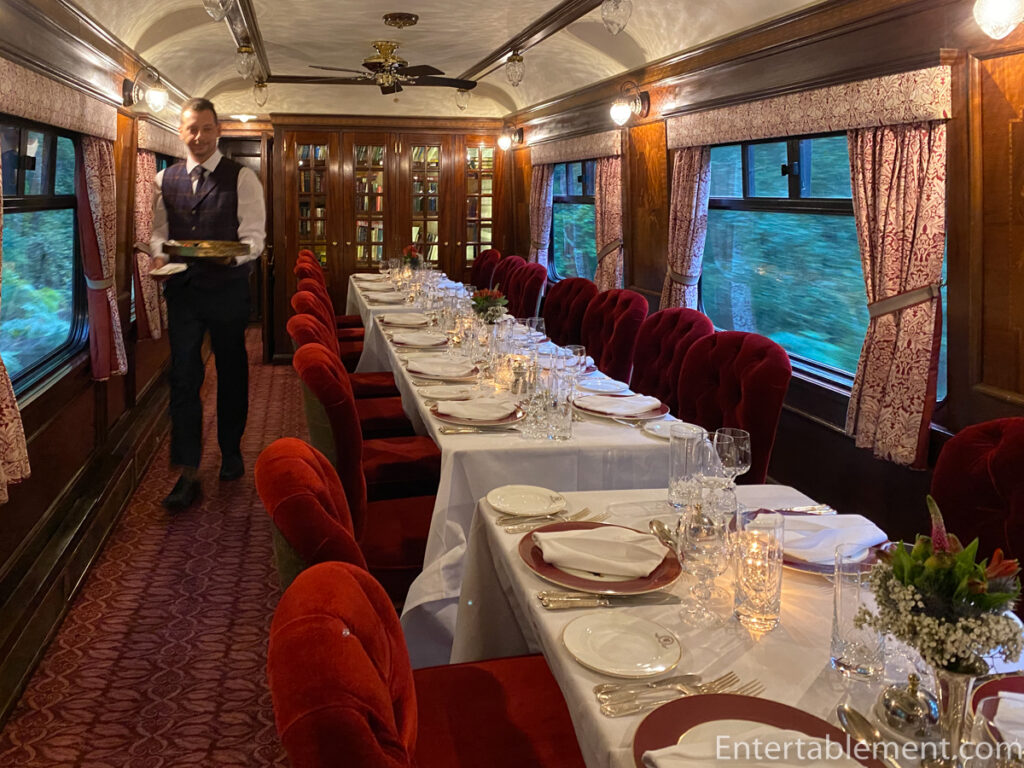 To begin at the beginning, we all met up in London for one partial and two full days together, and we made the most of it. A group of twelve was somewhat unwieldy to move en masse, so we split up for some excursions, prioritizing destinations not yet seen by the various participants, including The Tower of London, Borough Market, the Churchill War Rooms and the Imperial War Museum. Everyone but the oldies went up in the London Eye. The ladies had tea at The Goring while the guys visited The Red Lion pub just off St James’s Street. 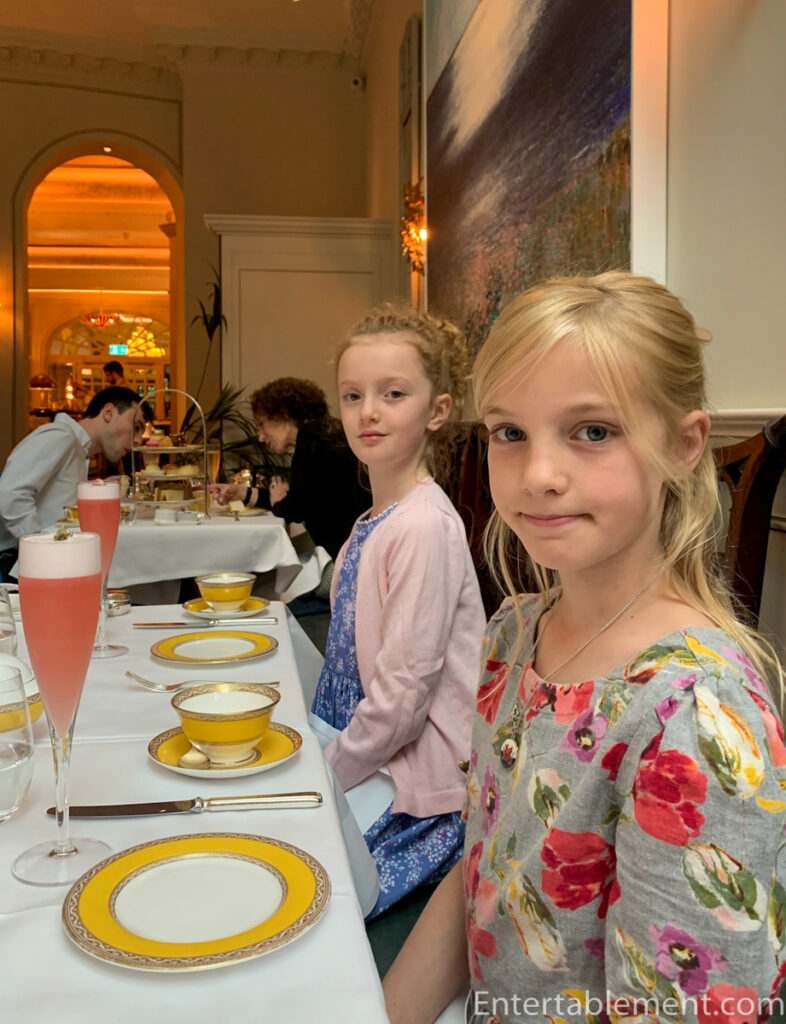 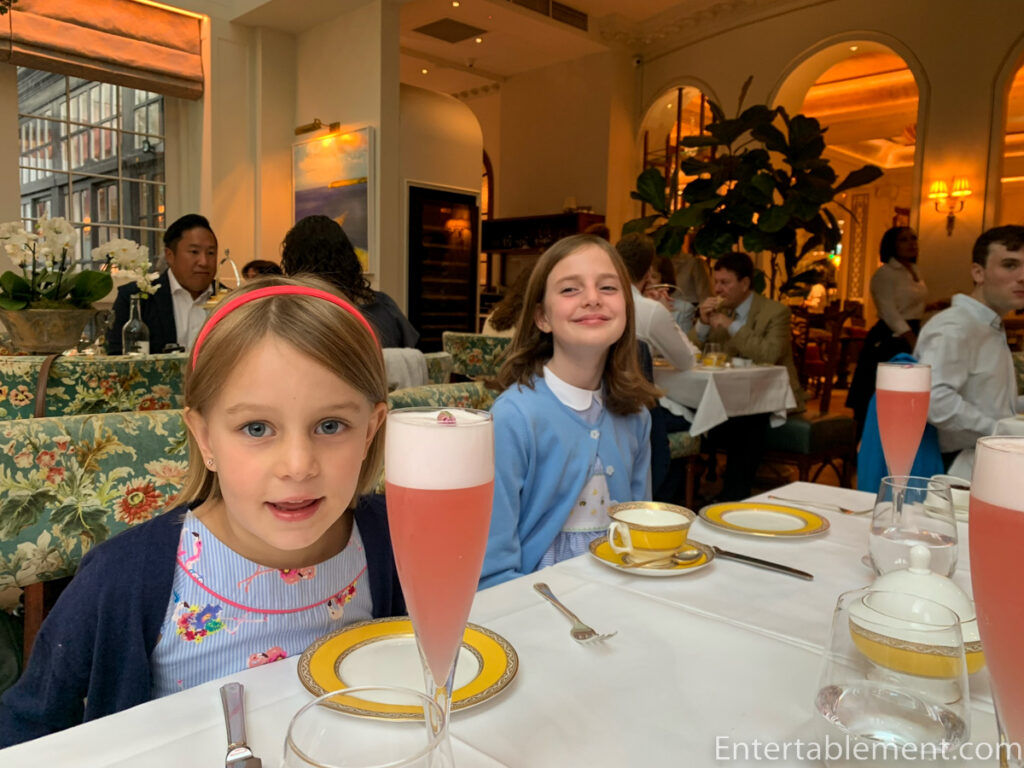 We all went to Warner Brother’s Studio to see the Harry Potter film set. 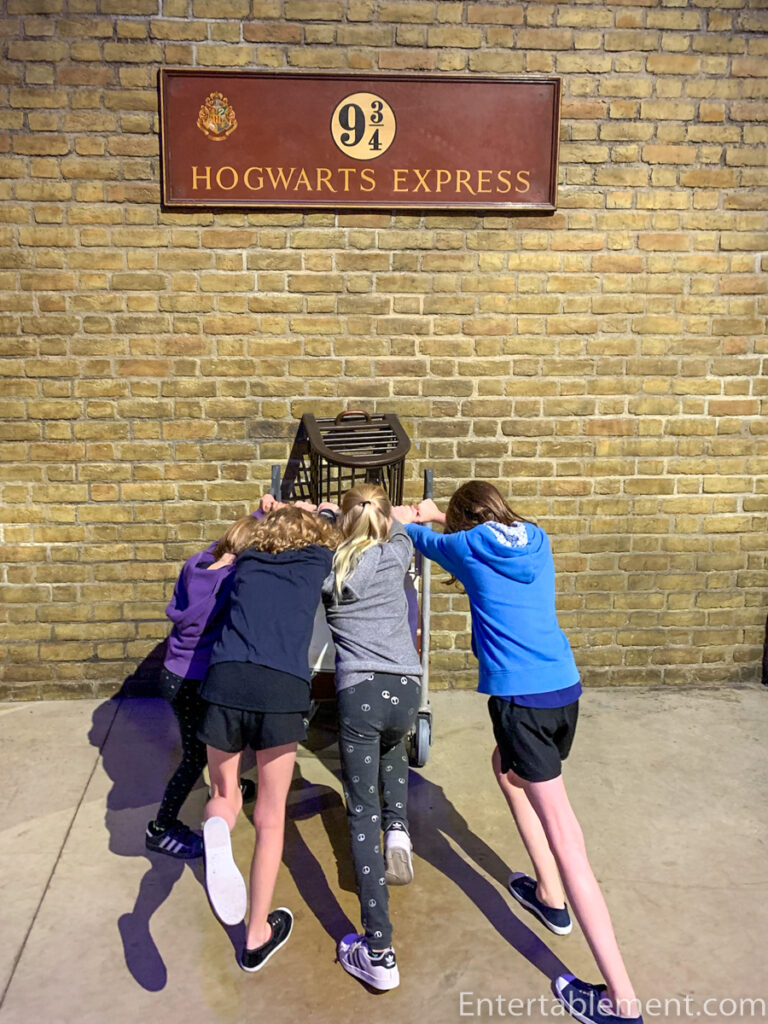 Our first evening together was at Chiccetti on Piccadilly, a favourite spot for dinner. Maddie and Juliana introduced their cousins Hannah and Riley to the delights of Venetian-style tapas, finishing with the enormous Chiccetti gelato sundae. 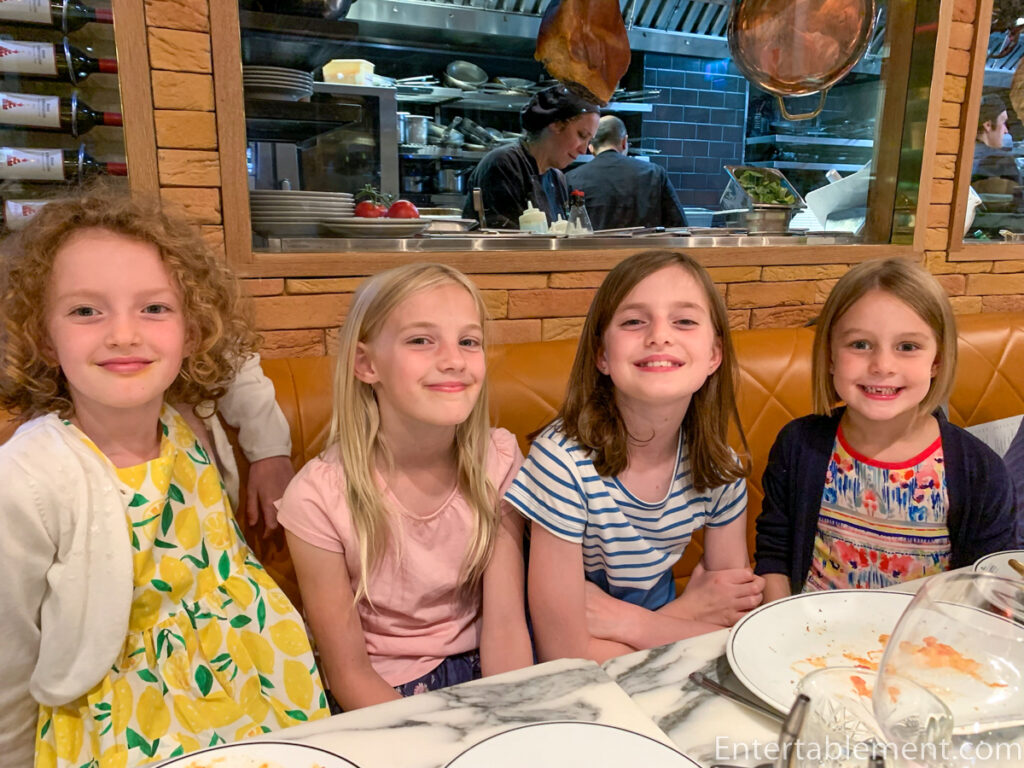 Earlier that day, we had squeezed in a visit to Westminster Cathedral (now allowing photos!). Riley was fascinated, paying rapt attention to the audioguide, much to my surprise. It seems you can’t start them too early! 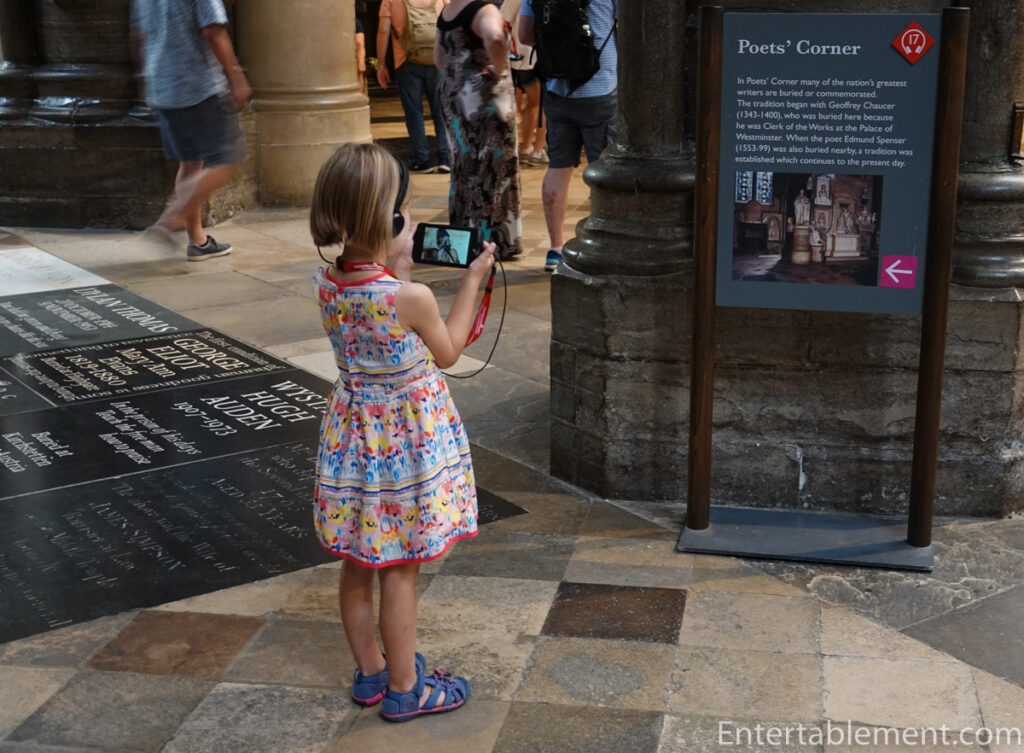 Our stay at The Goring was made particularly enjoyable by the sense of humour displayed by the staff. The Goring is famous for its sheep “stuffies”—large ones are scattered around the hotel, and small ones adorn each bed. Guests are encouraged to take the small ones home with them. As described on the hotel website:

The Goring sheep have become as iconic as the hotel itself. Here is a little history on how they came to be…

Guests used to remark to the late George Goring that they did not feel as if they were in London when they stayed at The Goring, but rather it had the peace and calm of a country hotel – due to the beautiful garden and the very quiet location in Belgravia.

So one day, when he was driving through Devon, Mr Goring came across the workshop of a gentleman who made the most engaging wooden sheep with real sheepskin fur. He bought one and took it back to The Goring, as he thought it really brought the country feel of the hotel to life. The guests loved it – and he subsequently commissioned him to make more and more.

When guests visit The Goring today, they will be able to see some of these famous sheep dotted about the hotel and on each bed, ready to welcome guests to The Goring.

The little sheep are never in the same place twice. The first morning, we returned to find our sheep greeting us from the end of the bed. 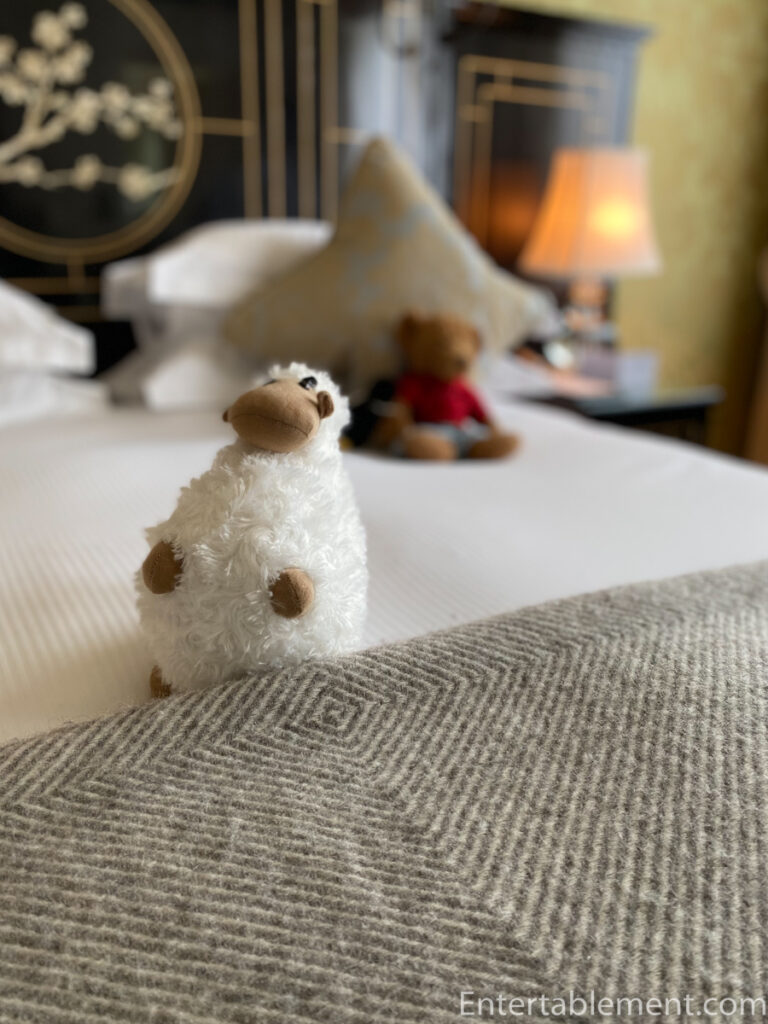 That evening, he was tucked up watching TV with Teddy and Gustus. 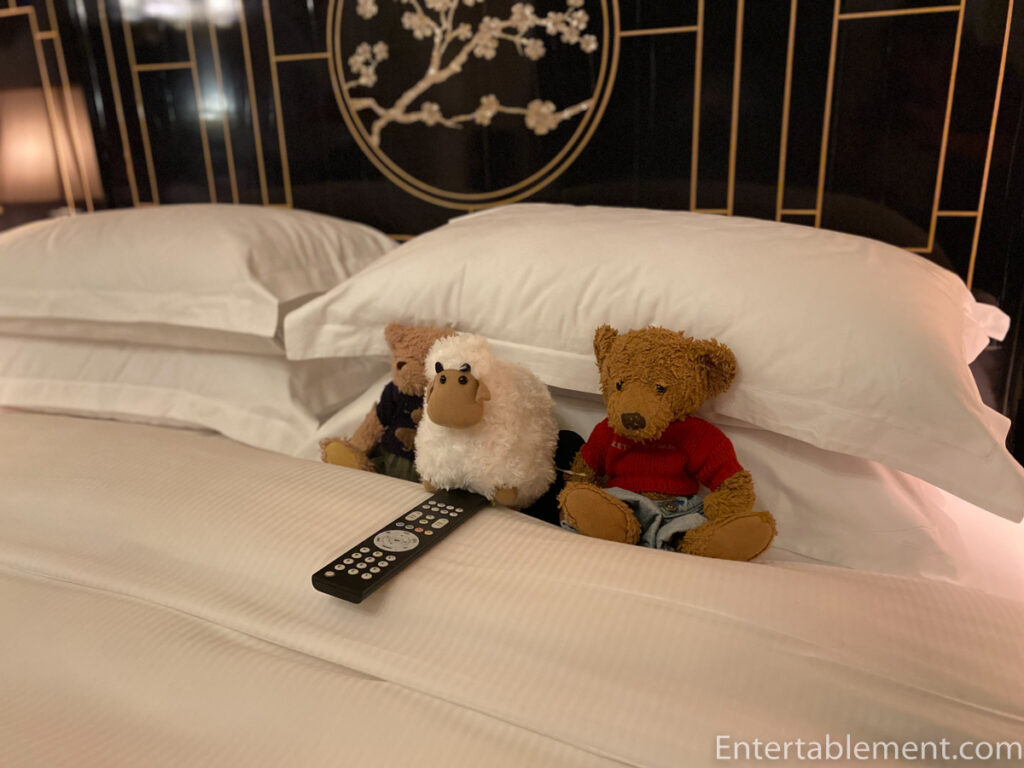 The kids entered into the spirit of the game, leaving their sheep wearing headphones or in pyramids with their other stuffies to come back and find the arrangements wholly changed. 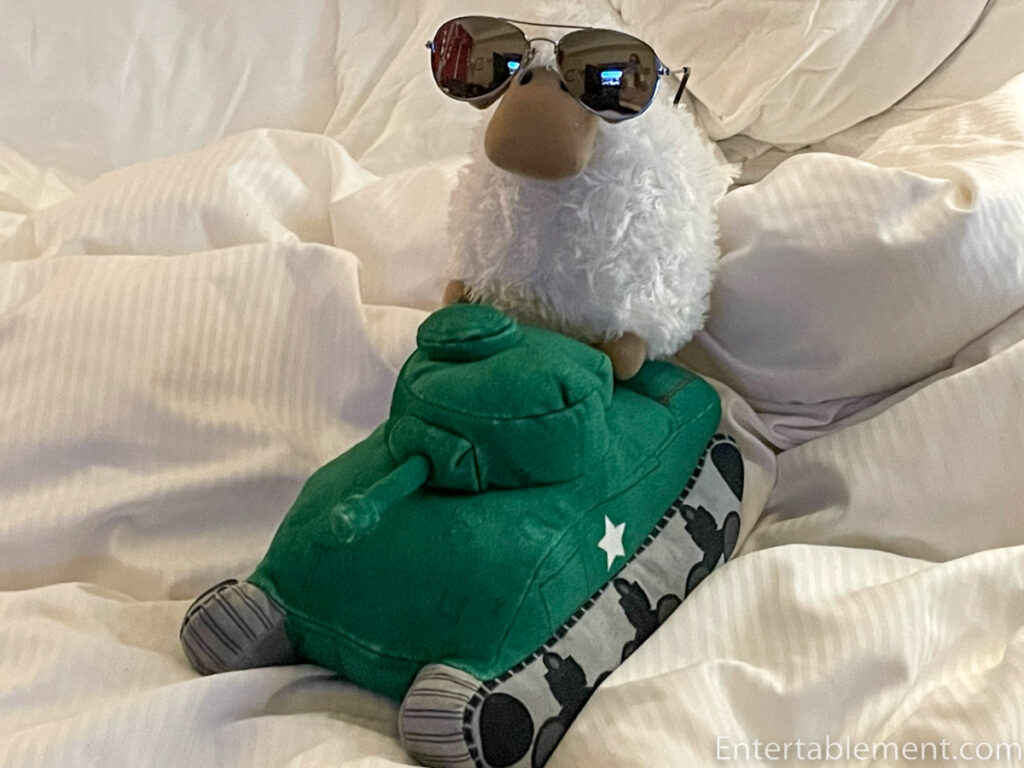 Riley celebrated her 6th birthday whilst in London and arrived back at the hotel to find her room transformed with not only sheep but balloons. She was enchanted. 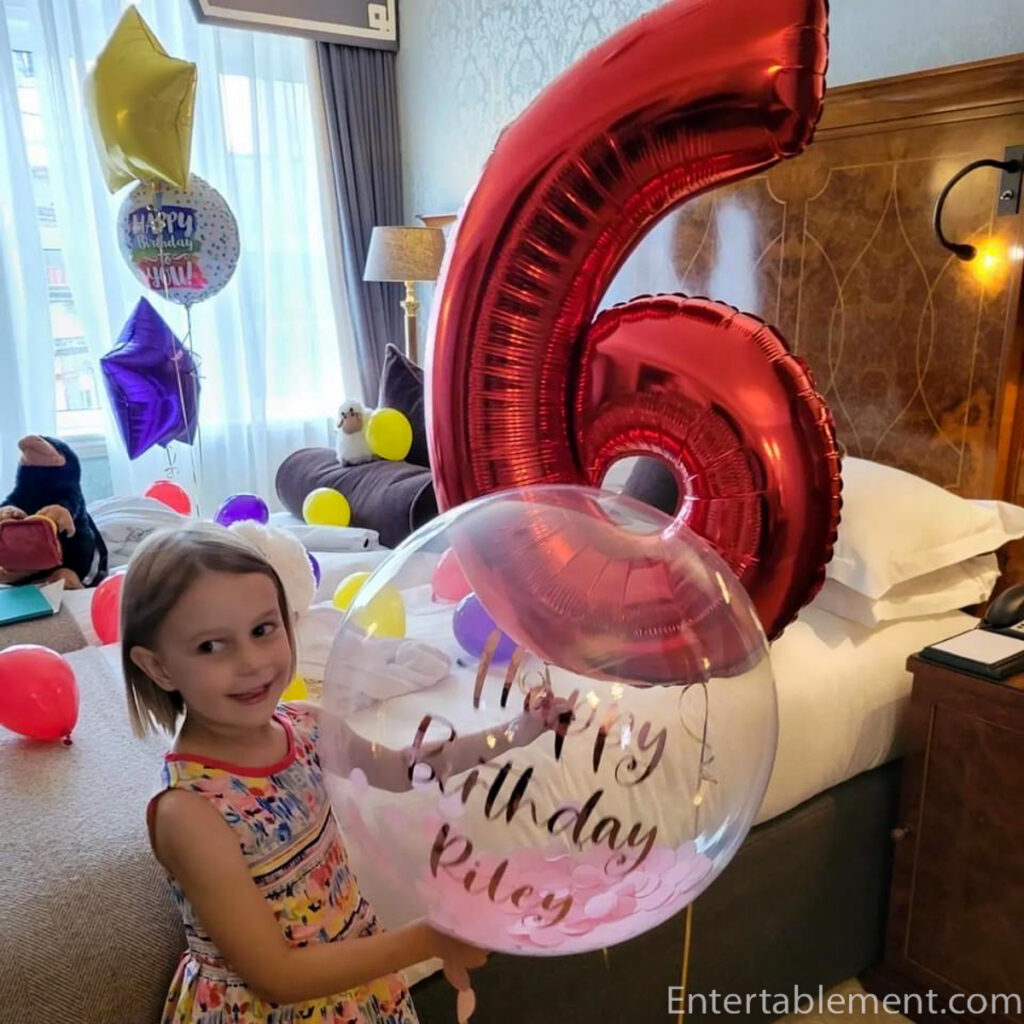 On the final day in London, we picked up the rental cars and headed for Hever Castle so Maddie and J could show their cousins the enormous playground where they had spent so many happy hours during their trip with us four years ago. 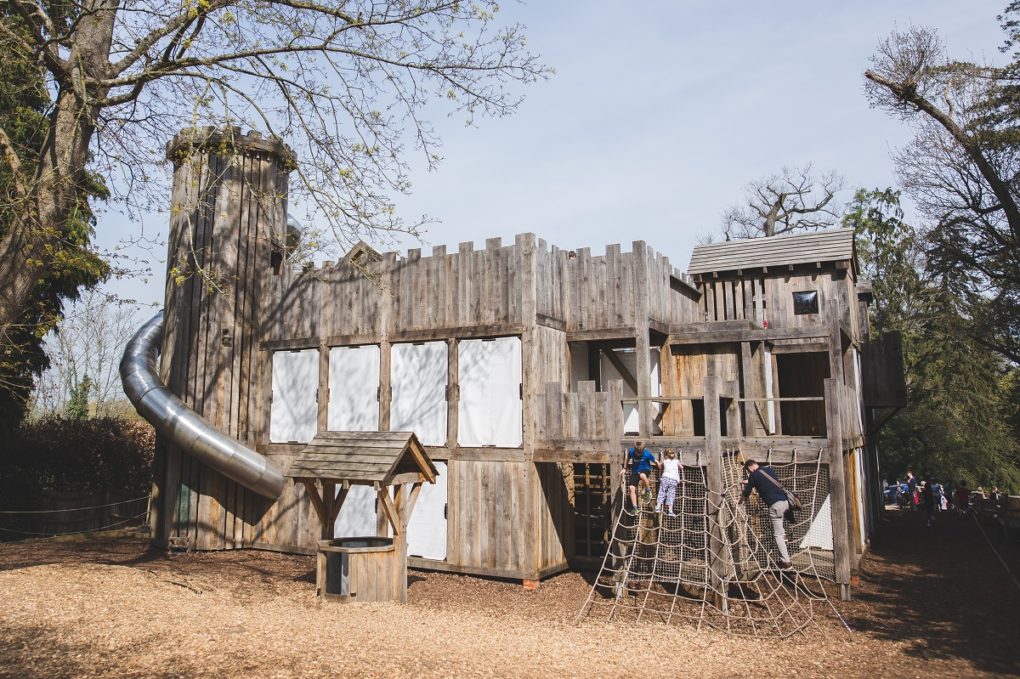 The stop was more or less on the way to the Wool Merchant’s House in Somerset, which we had rented for a week. It was ideal, with sufficient room for everyone to hang out together and get some quieter time. 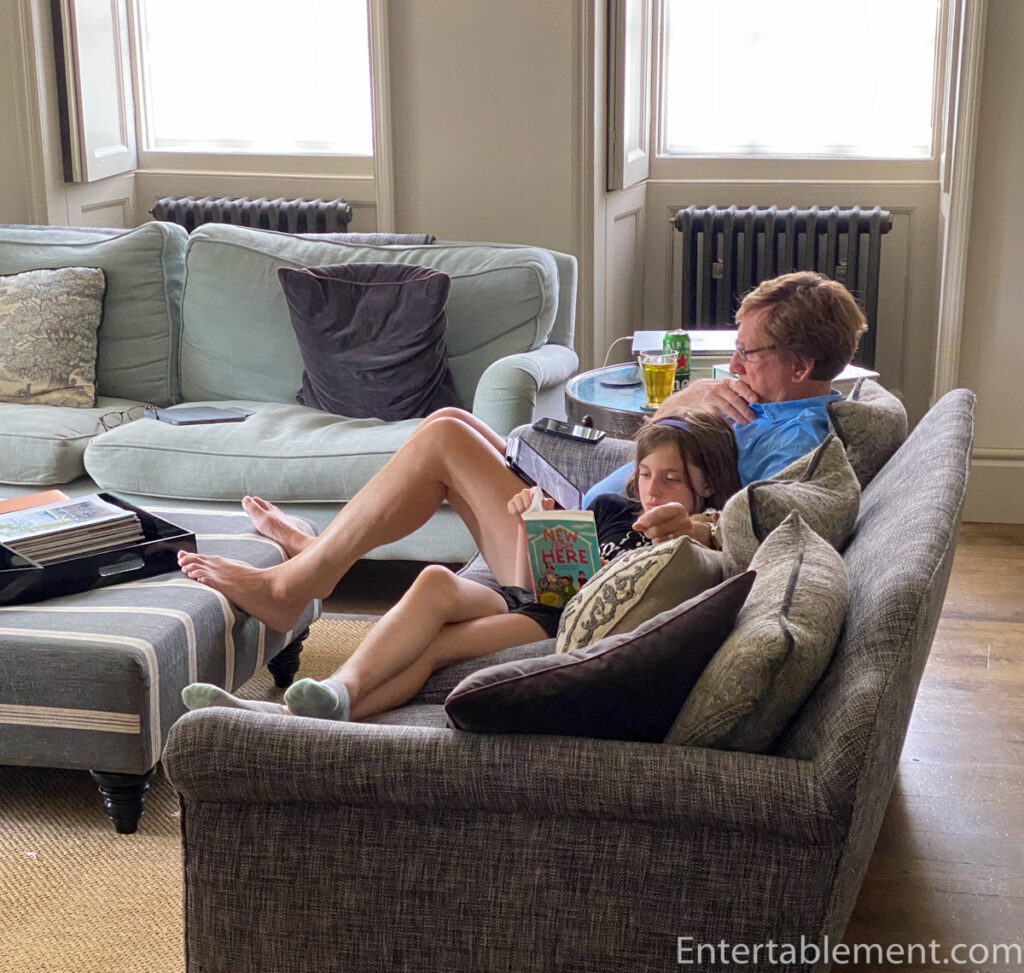 The cooking facilities were excellent, and we took full advantage of them, spending some evenings at home… 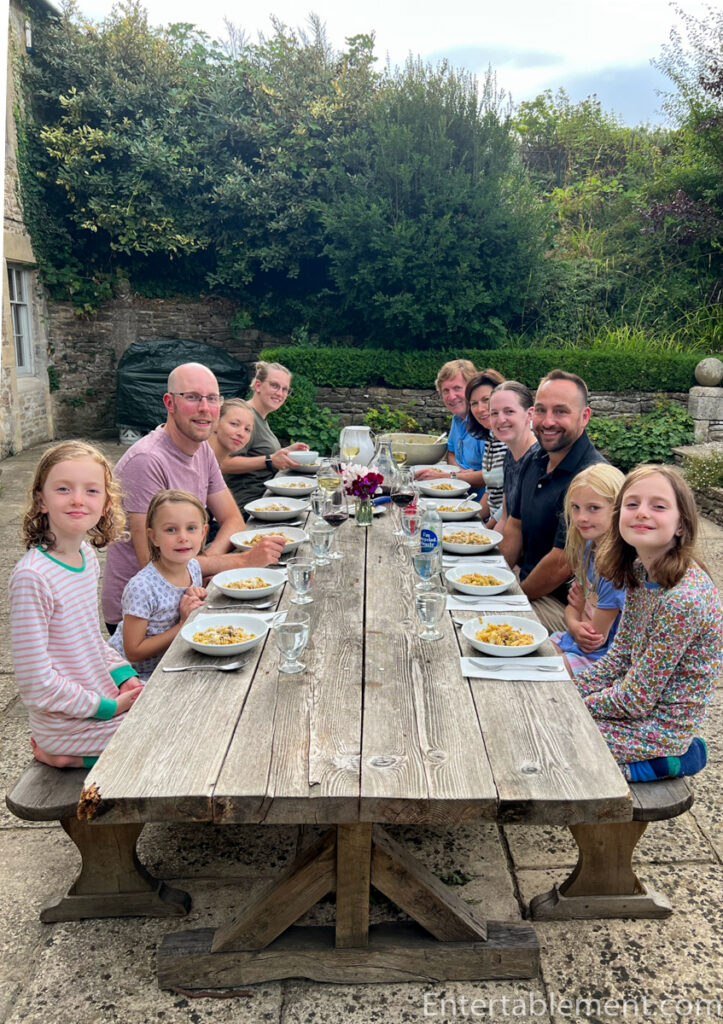 …and others in the local pubs. Where else but in England can you get a view like this ‘down the pub’? 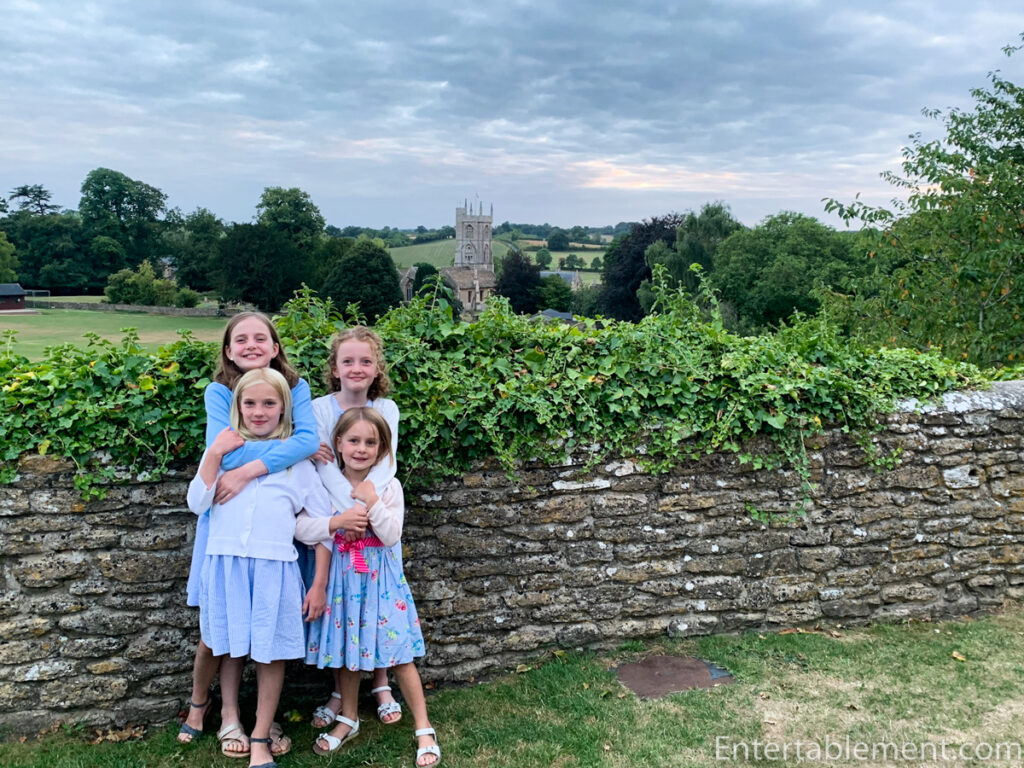 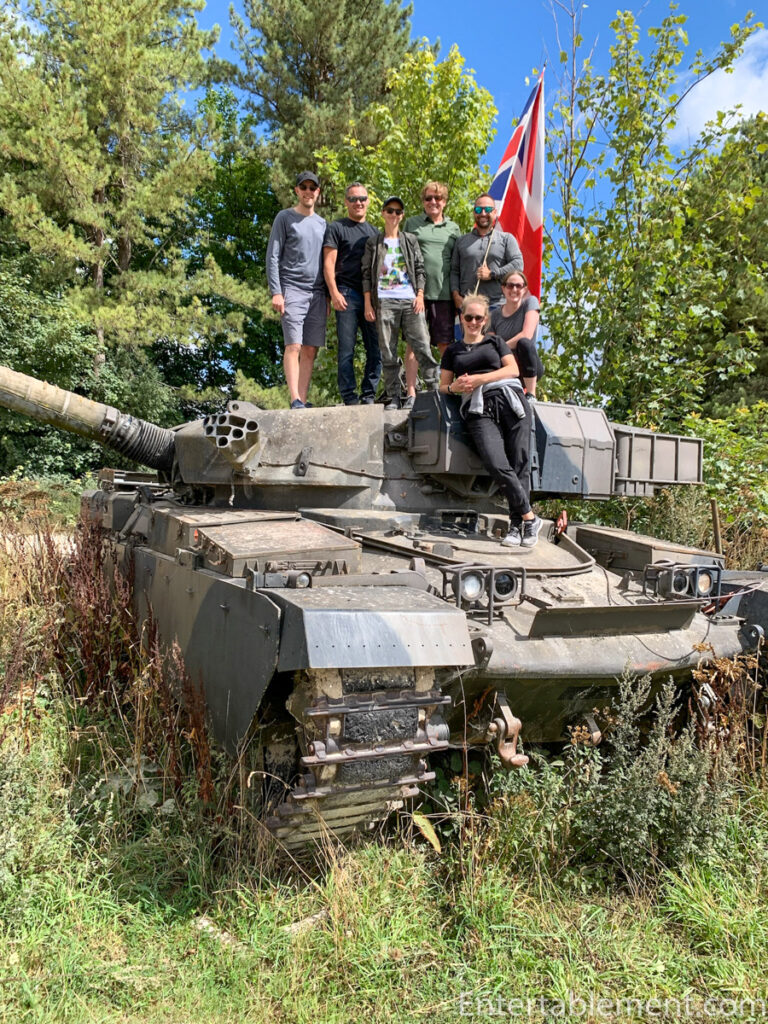 …to visiting Wells Cathedral and the gardens surrounding the Bishop’s Palace. 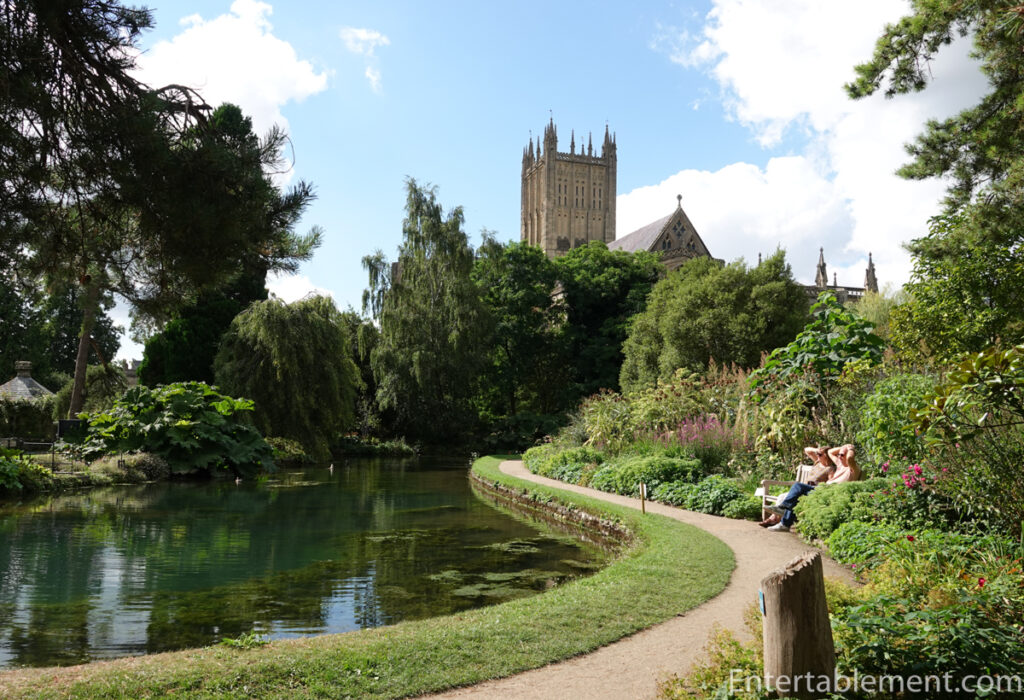 We also took in Bath, The Morgan Motor Company Factory Tour and Blenheim Palace. One family got up at dawn to visit the inner circle at Stonehenge whilst another went clay pigeon shooting. So there was something for everyone! 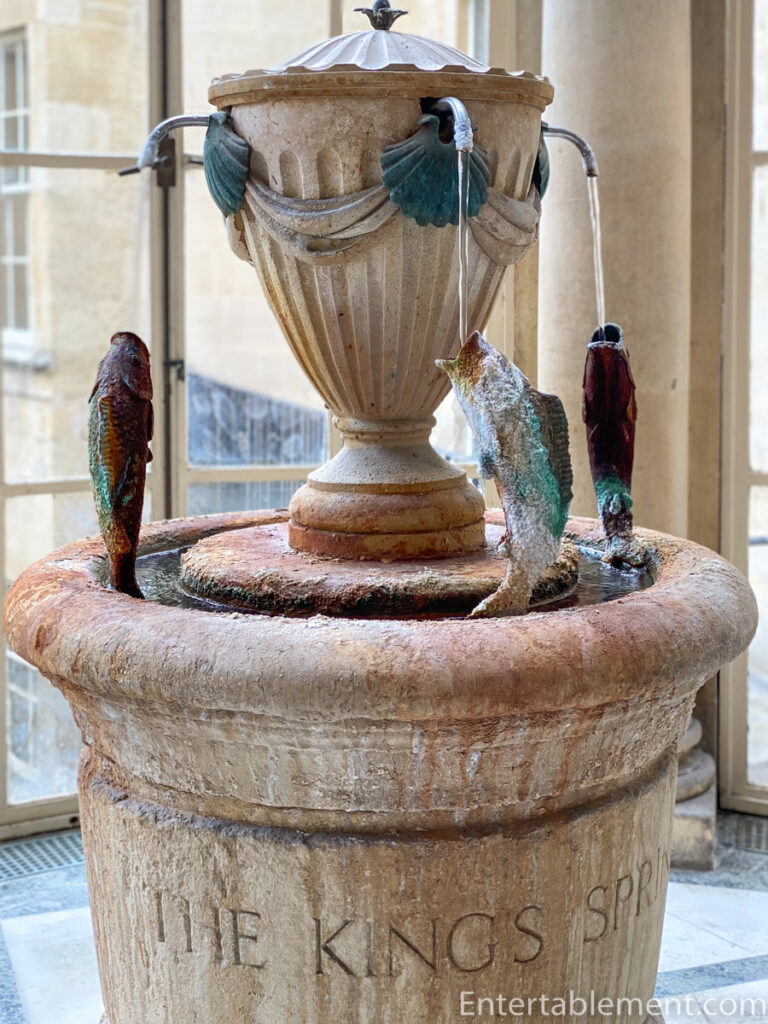 The Pump Room in Bath.

Then off to Warwick Castle for two nights. Suffice it to say that Warwick Castle ain’t what it used to be. Our previous experience had been a child-friendly, beautifully restored castle; it’s now a theme park within the walls of a castle. The kids loved it; I was aghast. We stayed two nights at The Knight’s Village (Maddie kept giggling at the very idea of Nana camping). The little ones adored the campground, which included enormous trees for climbing. 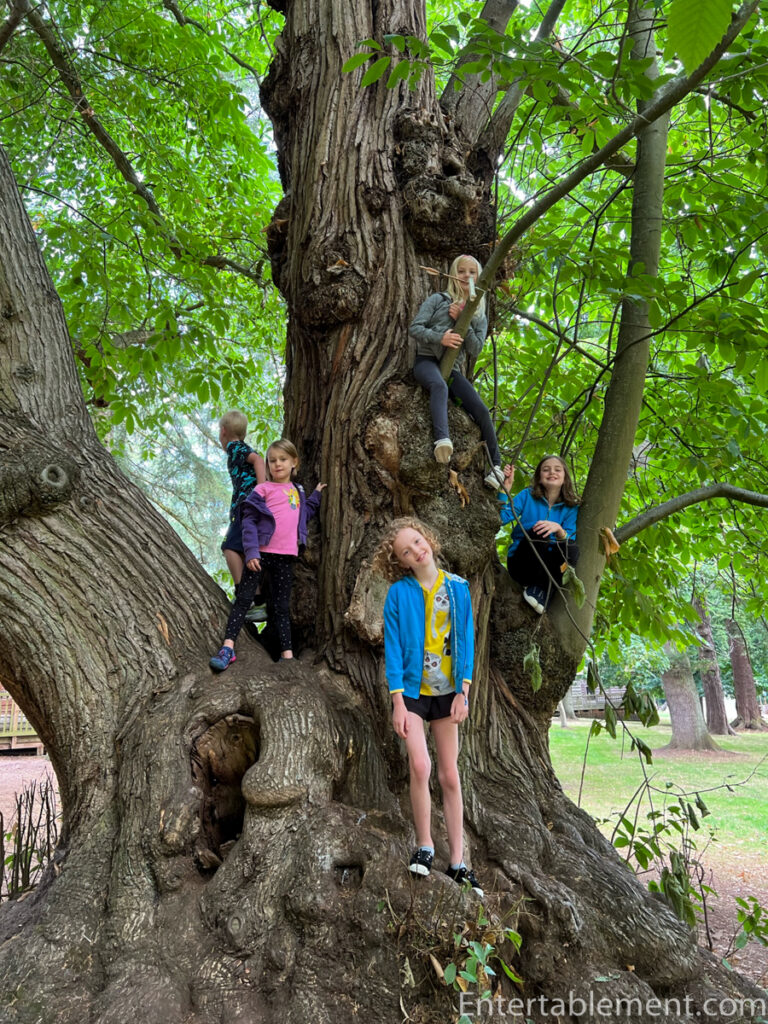 At this stage, one of the couples and two granddaughters branched off to finish their holiday in France. So eight of us carried on into North Yorkshire to stay at a Stank House Farm (awful name, heavenly location), one of the Devonshire properties in Bolton Abbey, for three nights. This is the view early one morning from the sitting room window. It looks like a Turner landscape, doesn’t it? 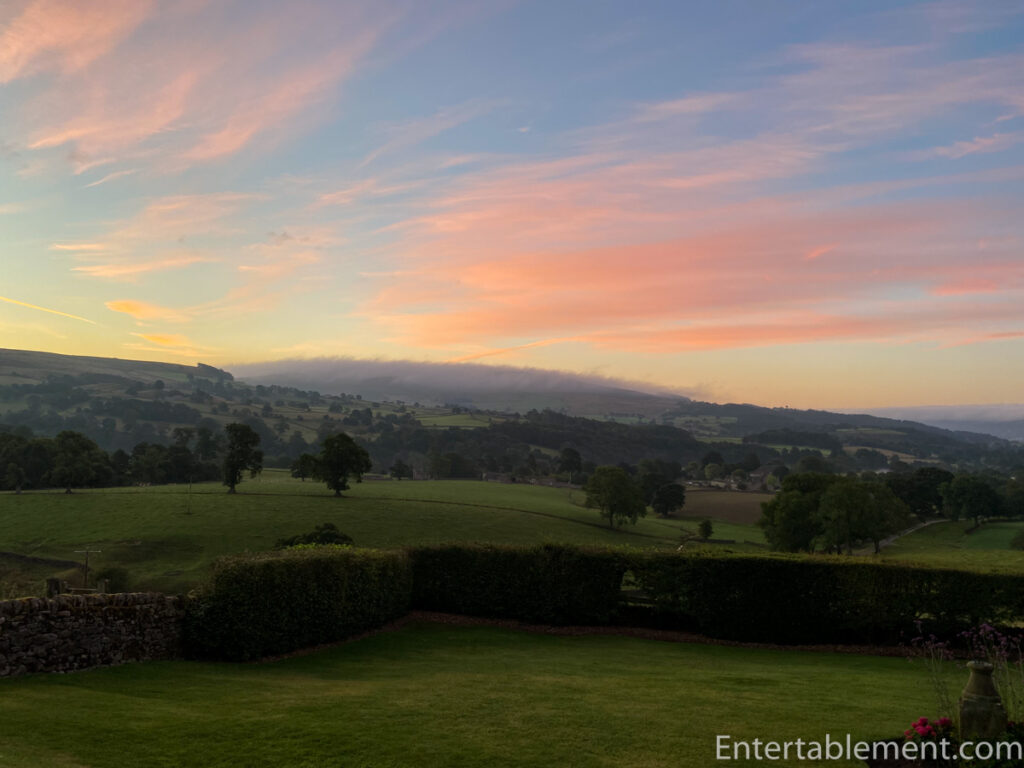 The kids enjoyed the challenge of crossing the 60 stepping stones at Bolton Priory, formerly the crossing point for the lay workers at the Priory. 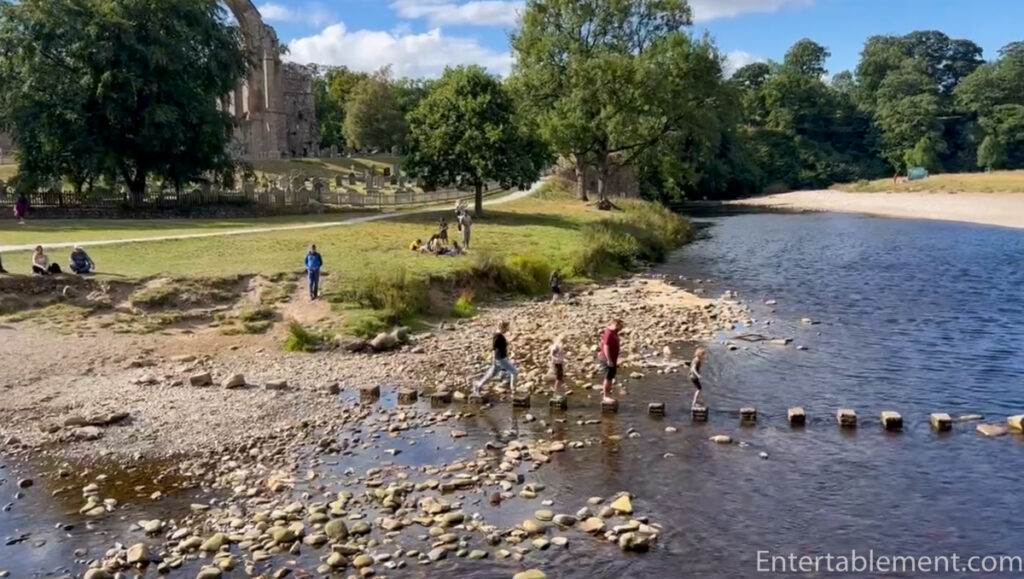 Nana photographed Bradford Cathedral (#41) on our way to the town of York, where we spent the day. We also took in Fountains Abbey and the Studley Royal Water Garden before journeying north to Alnwick. 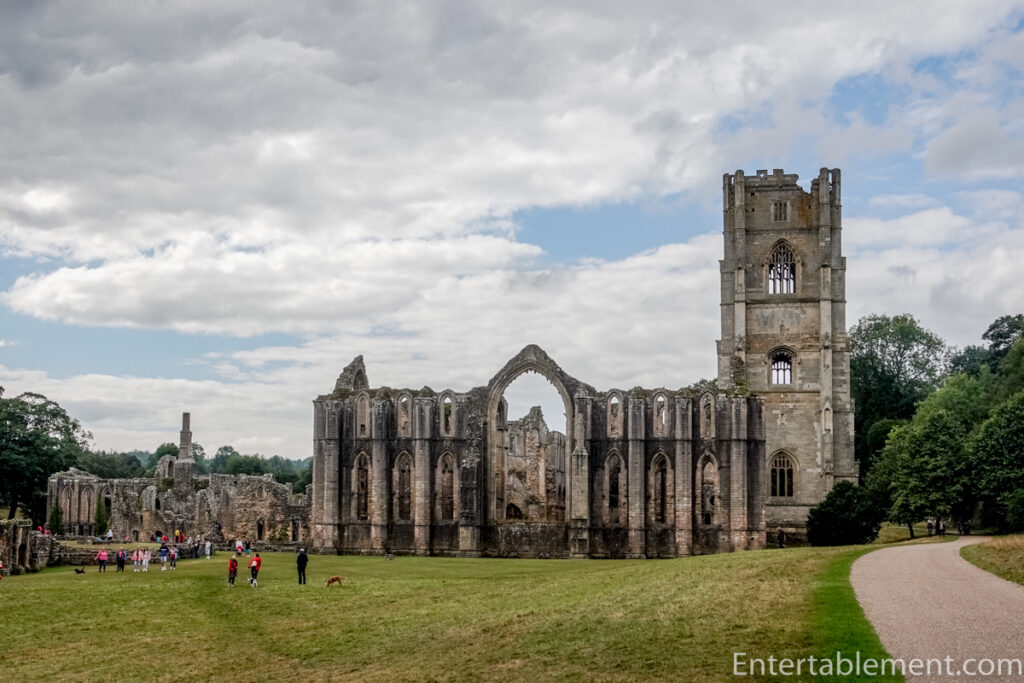 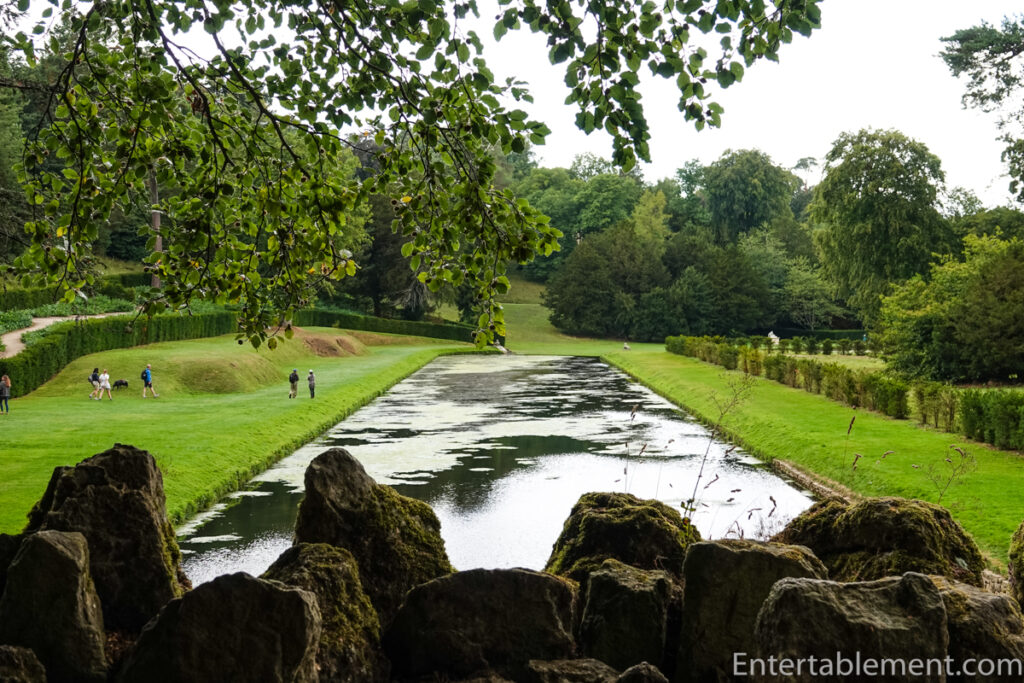 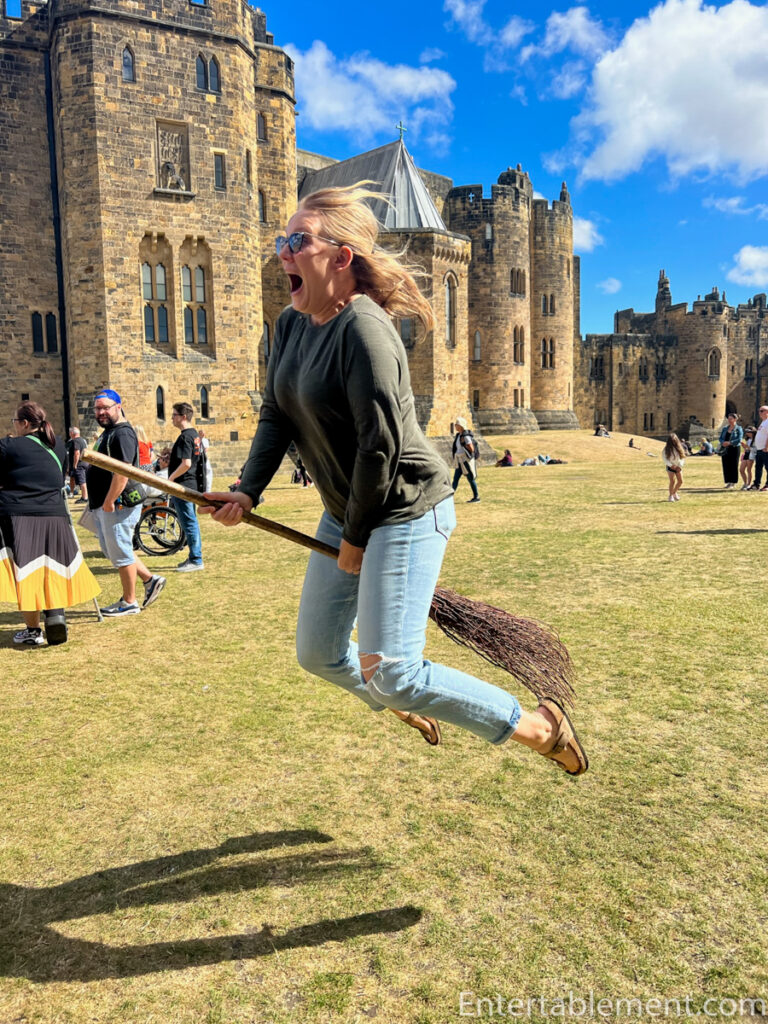 Nana visited Newcastle Cathedral (#42) on the way up. The cool thing about Newcastle is how the tower has shifted, such that the cover of the baptismal font no longer lines up with the base. But I digress…  The big news is The Cathedral Quest is Complete! Alleluia!! Now it’s a simple matter of gathering all the material and photos into a coherent format. That should only take another year or so (snort). 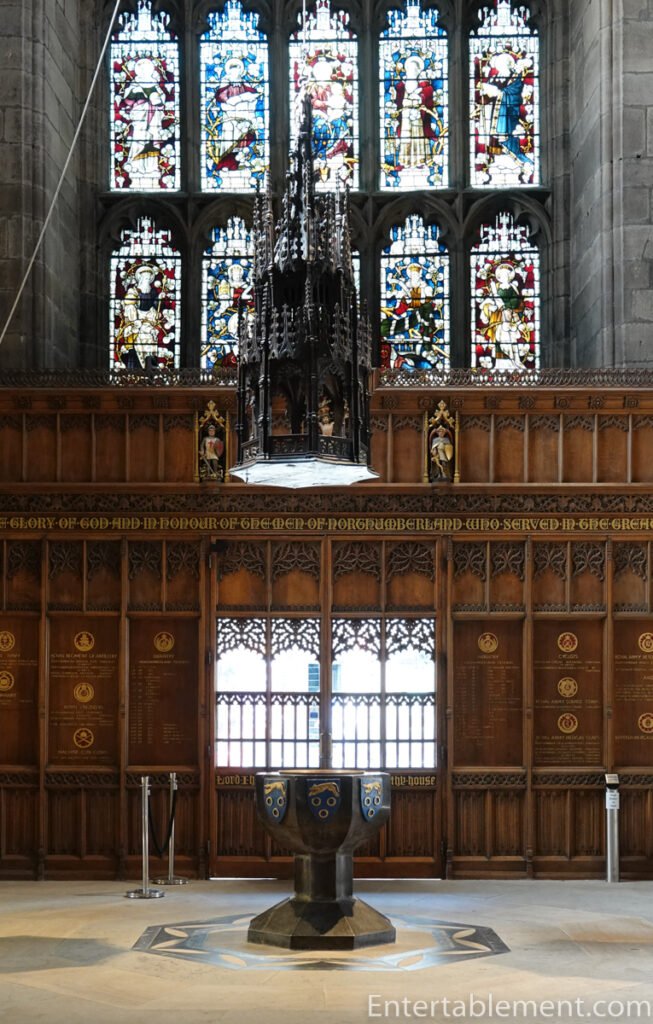 After spending one night at The Cookie Jar, we stopped at Bamburgh Castle on the way up to Edinburgh. My maiden name is Bambrough, and Dad’s family was from that area, so it’s always had a special place in my heart. We were incredibly lucky with the weather, and the kids enjoyed a romp on the beach before we returned to the cars to arrive at our final destination, Edinburgh. 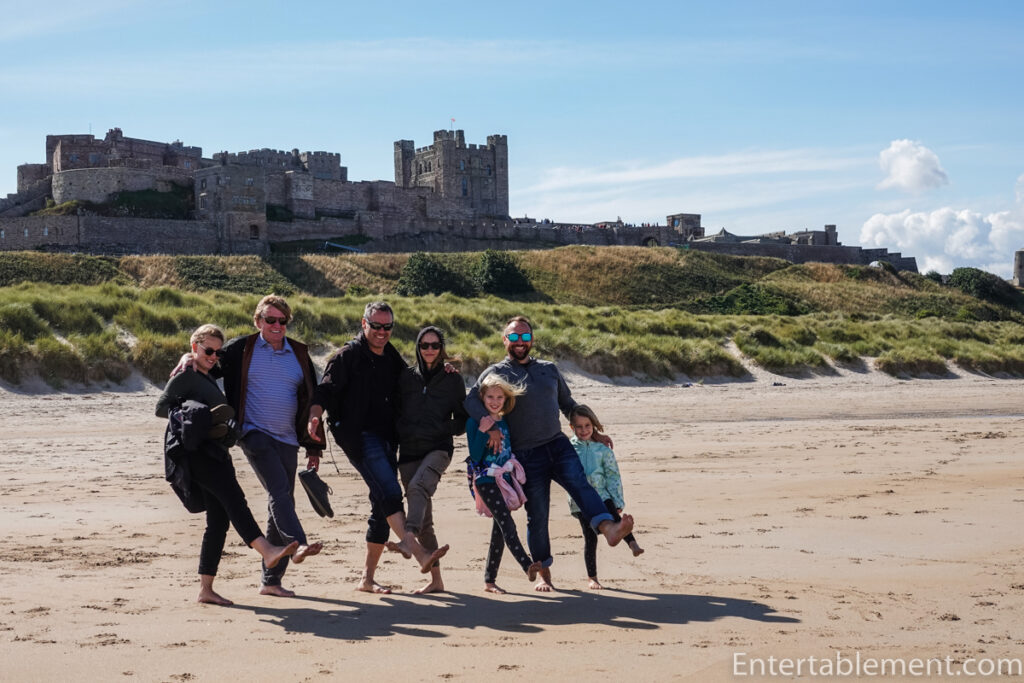 Driving in Edinburgh is not for the faint of heart, and we were glad to finally arrive at our hotel, Kimpton Charlotte Square in New Town. The cars did not leave the car park for the next two days, as we enjoyed the city on foot. Everyone was castled out by then, so we eschewed an Edinburgh Castle tour but walked up to watch the crews dismantling the enormous spectator stands erected in the courtyard for the Edinburgh Tattoo, which finished a few days before.

To the delight of Riley and Hannah, a local falconry had brought in a couple of owls for visitors to handle, donations going to the falconry. Riley was able to pet Einstein, a miniature owl. Unfortunately, I didn’t get a picture of Hannah and her owl, a gorgeous mottled bird 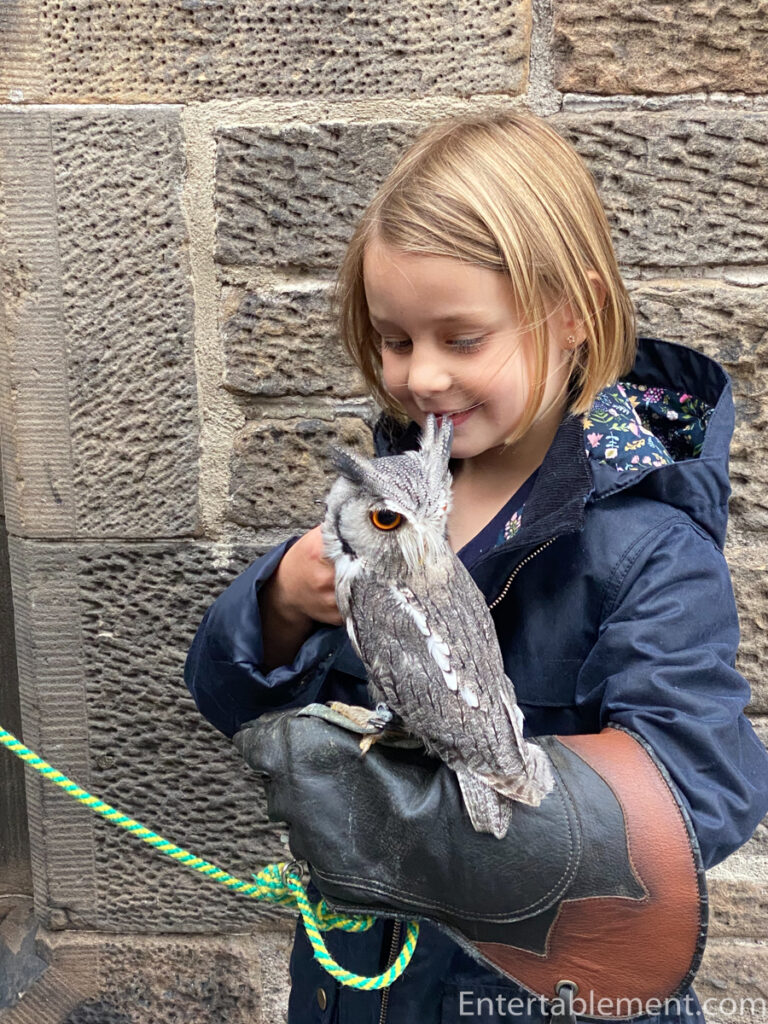 After two delightful days in Edinburgh together, the two remaining families headed home to Canada so the grandkids could begin school. Glenn and I met up with our good friends Bill and Maura to board The Royal Scotsman and take in the Clans and Castles tour by Belmond. 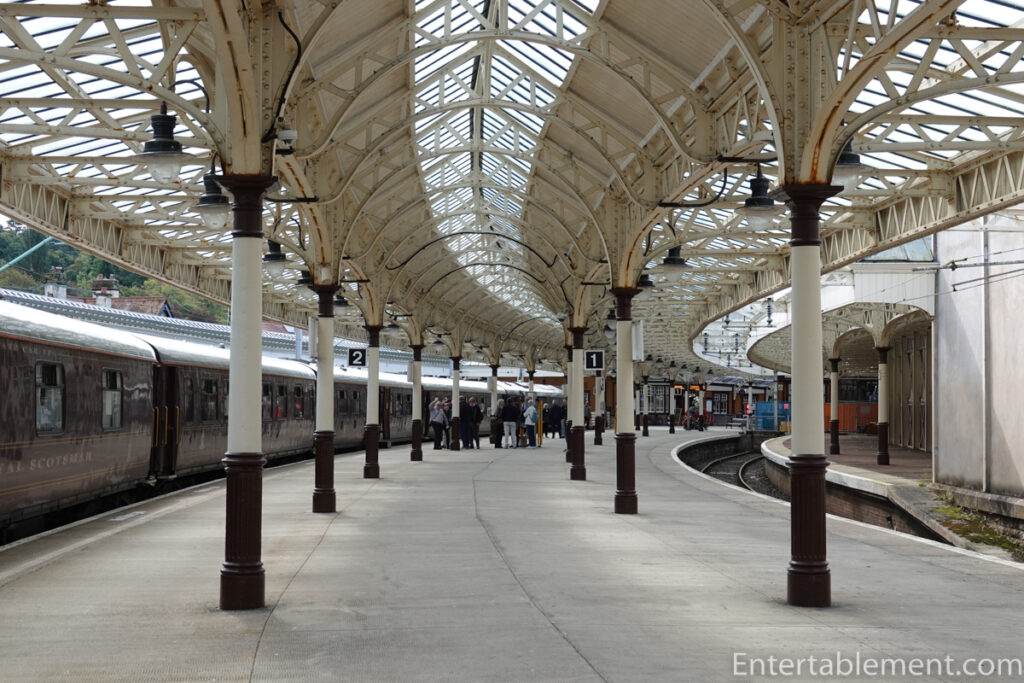 We were on the train when we learned the sad news about The Queen’s passing and were in Edinburgh on the day her coffin was making its way from Holyrood Palace to St. Giles’ Cathedral. I was very moved by the quiet atmosphere in Edinburgh, usually a bustling city. While it was a sober end to a once-in-a-lifetime trip, in some ways, it made it even more memorable.

So that’s a whirlwind overview of more than four weeks in the UK. The trip was an enormous success, with everyone having had a wonderful time. The new drivers to the UK paired up with valiant navigators and managed successfully on “the wrong side of the road”; they coped admirably with the roundabouts. The cousins were ecstatic at spending so much time together, particularly after the social isolation of the last few years (Canadian schools were closed for the better part of two years during Covid, and we have just now shaken off the last of the restrictions).

As you can imagine, there is more than enough material here for several more posts, so I’ll stop here for now. It’s fitting to end with a motto of the Scots: Haste Ye Back. We shall! 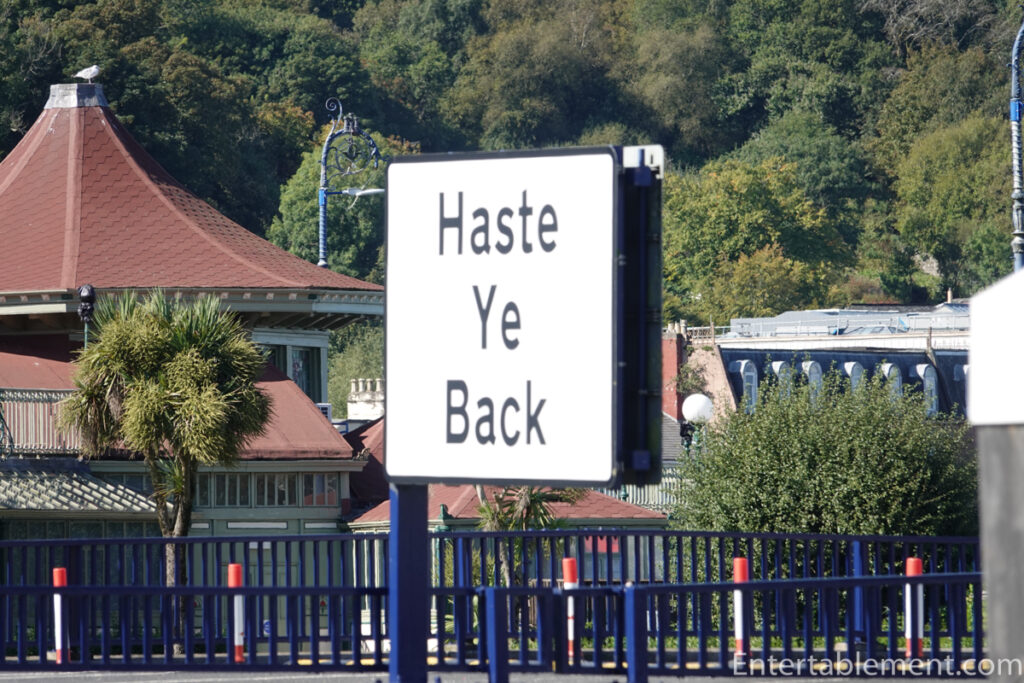