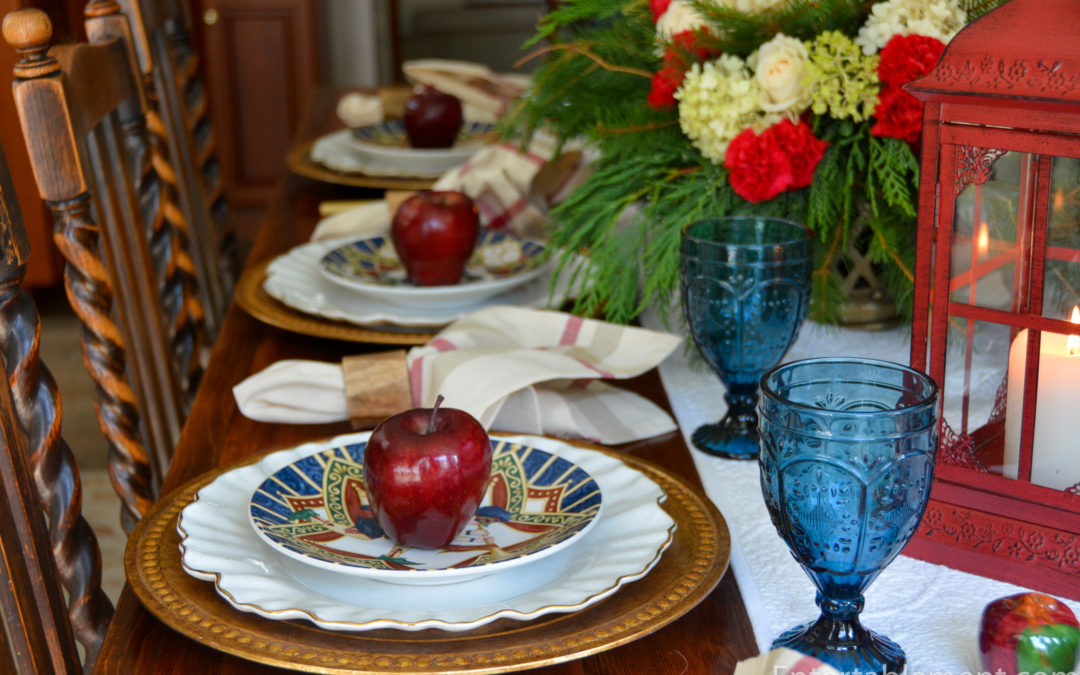 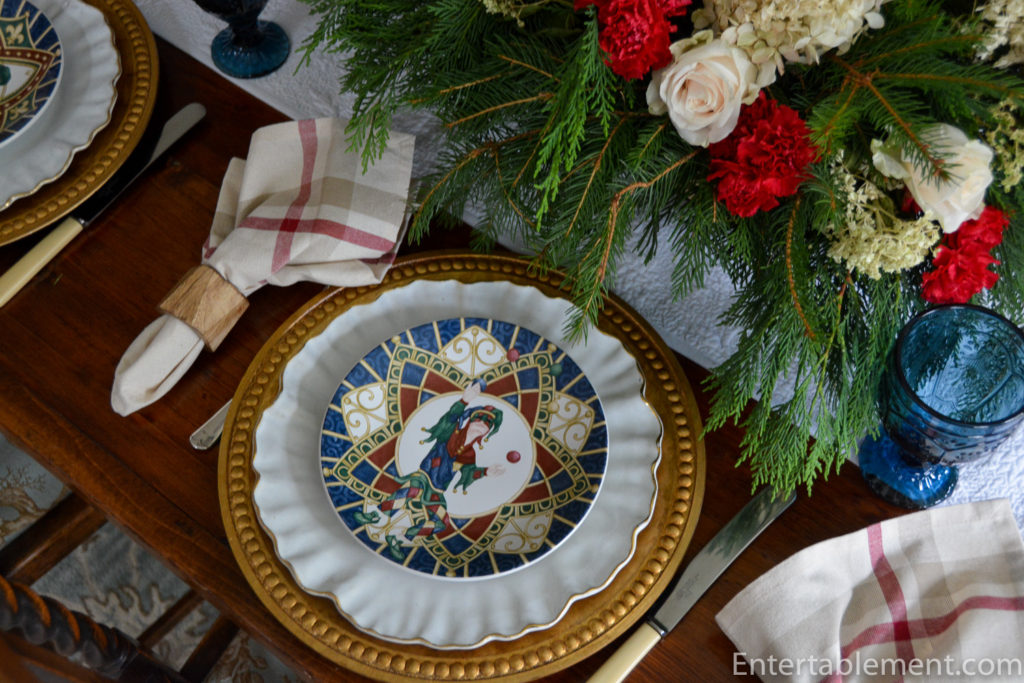 Harlequin figures are among my favourites, so it’s no wonder these appealed to me. The Comedia dell Arte theme was prevalent at the Christmas display at Waddesdon Manor. It’s a happy coincidence that I picked up these plates a couple of years ago and set a table with them this season. Royal Holiday was produced by Pfaltzgraff in 2001-2002 and is occasionally available on eBay or through Replacements. 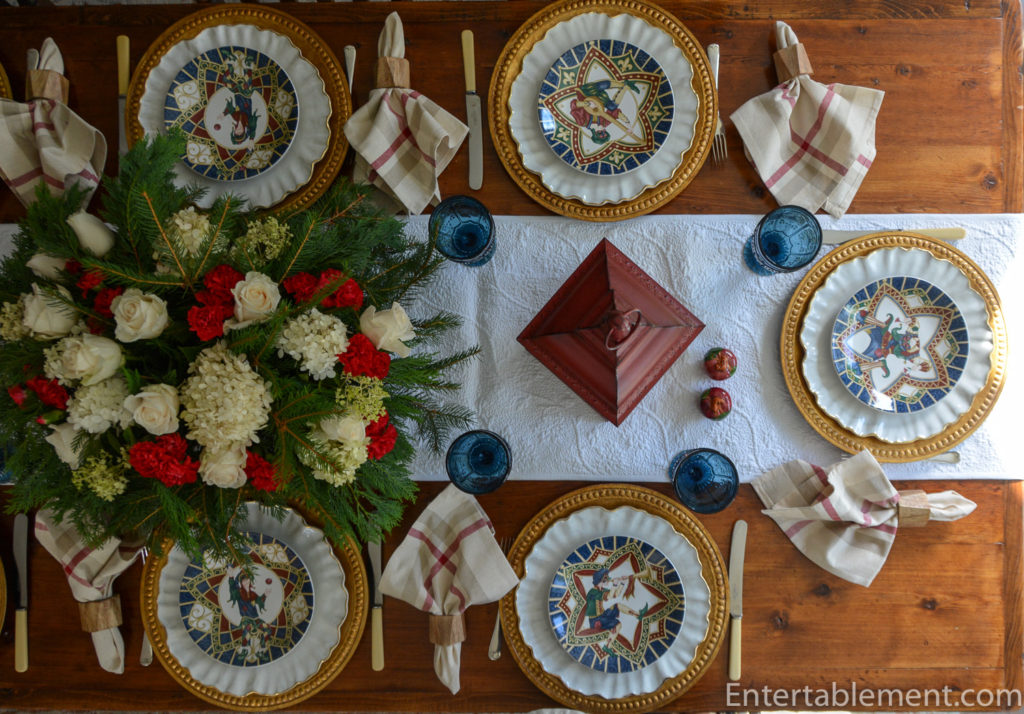 Not only does each plate feature a different figure, but the foundation pattern is different, too. This one has a tracery fleur-de-lis in the medallions around the rim. 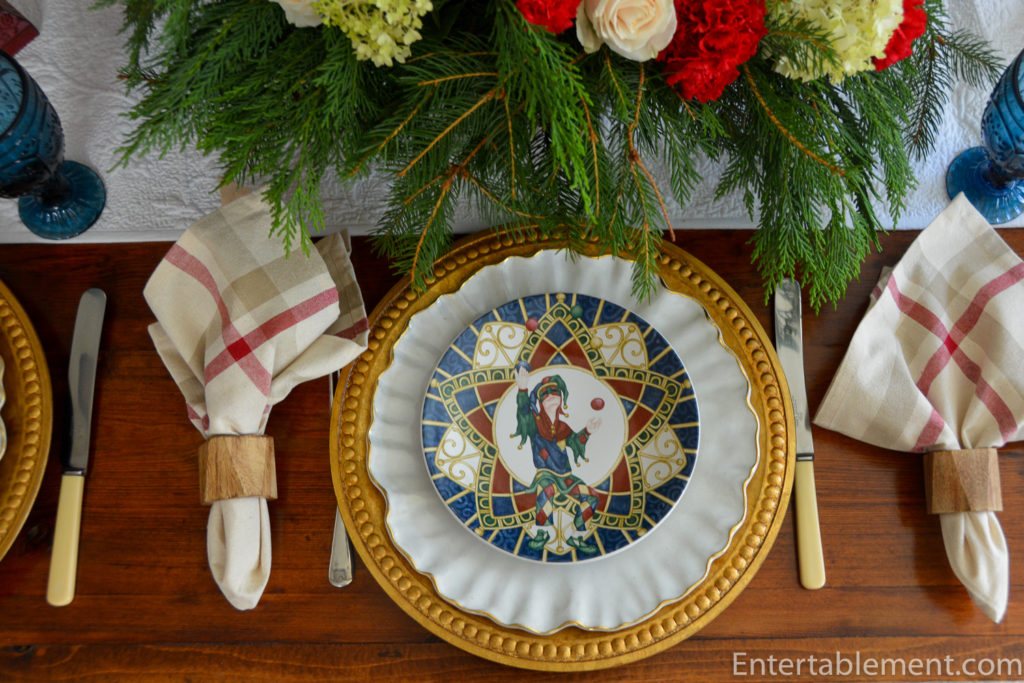 Where the no-doubt-ballad-singing lyre player’s plate has solid fleur-de-lis in a smaller diamond pattern. 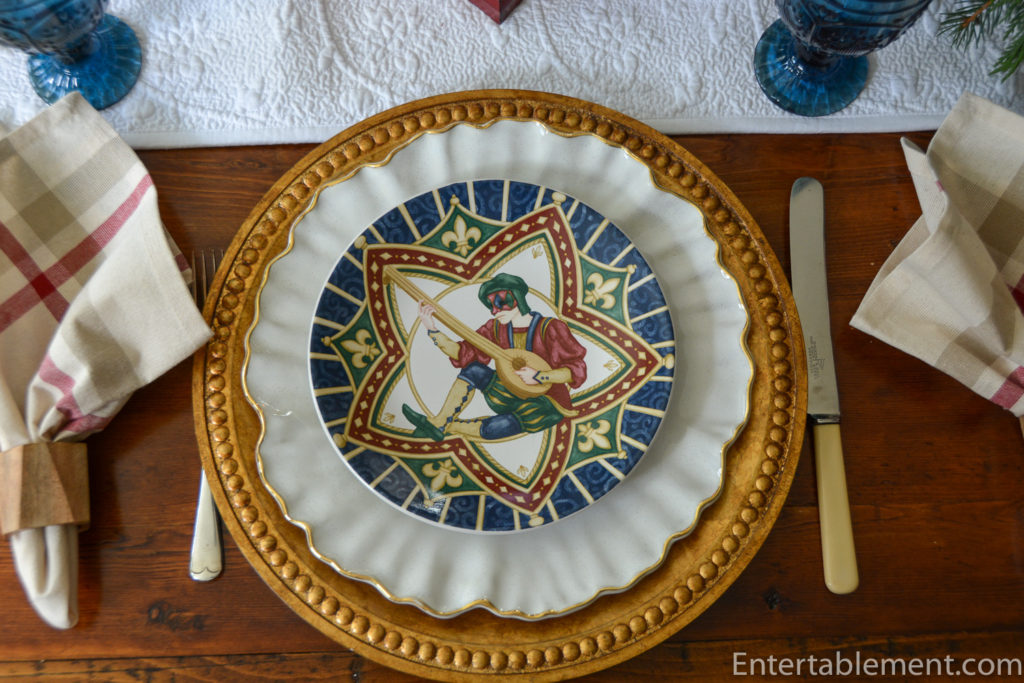 Scrolls and dots only on the horn blower. 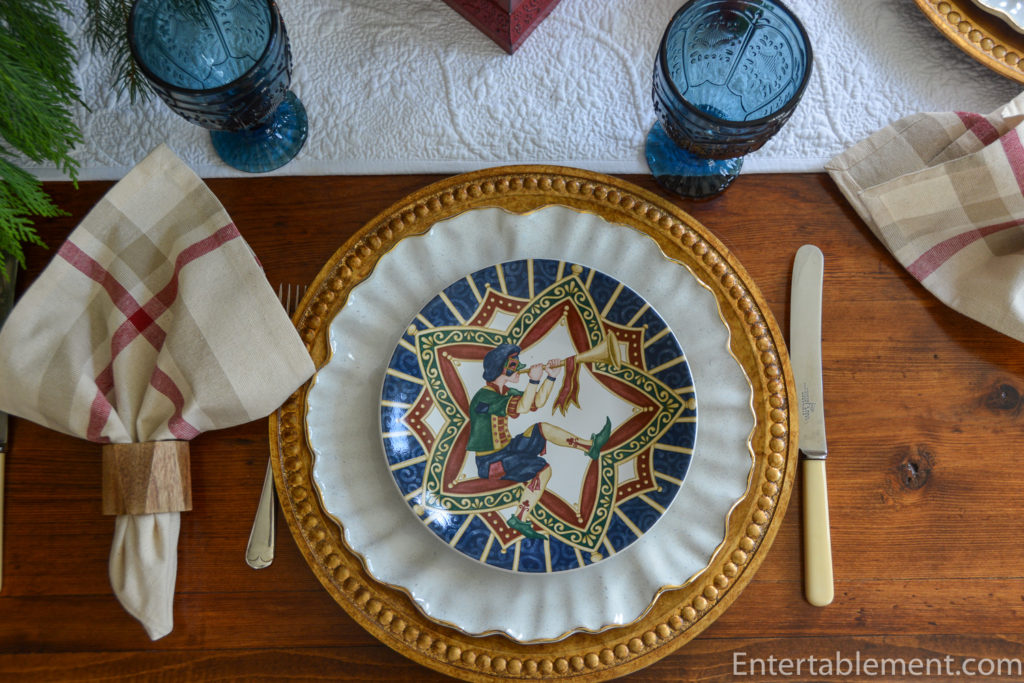 Which is similar, but not quite the same as my favourite, the goof-ball acrobatic jester. 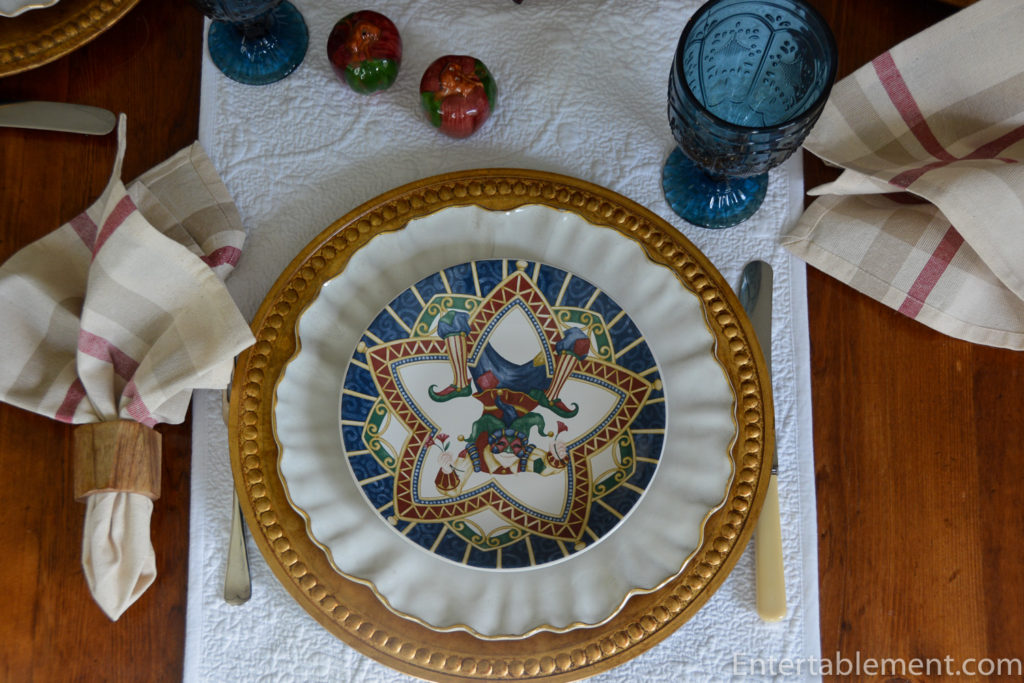 Styling the plates proved to be a bigger challenge than I anticipated. The blue really jumped out, but the red and green deserved attention, too, as it’s Christmas. 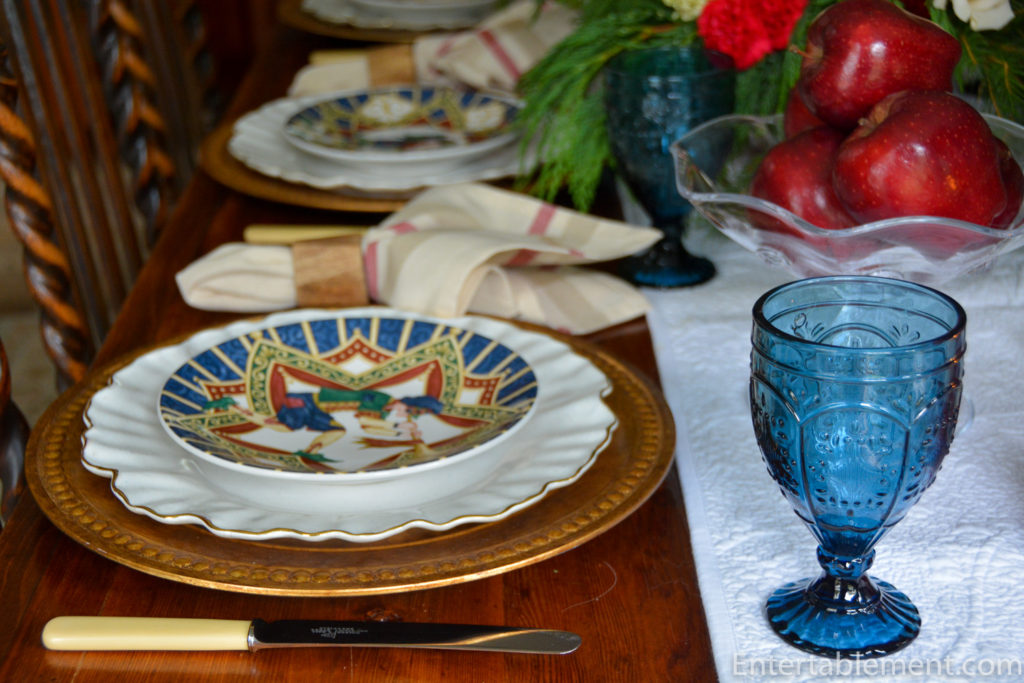 I used Fitz & Floyd Trestle glasses in Indigo for the blue. The chunky weight and the flowing patterns echoed the scroll work on the plates. 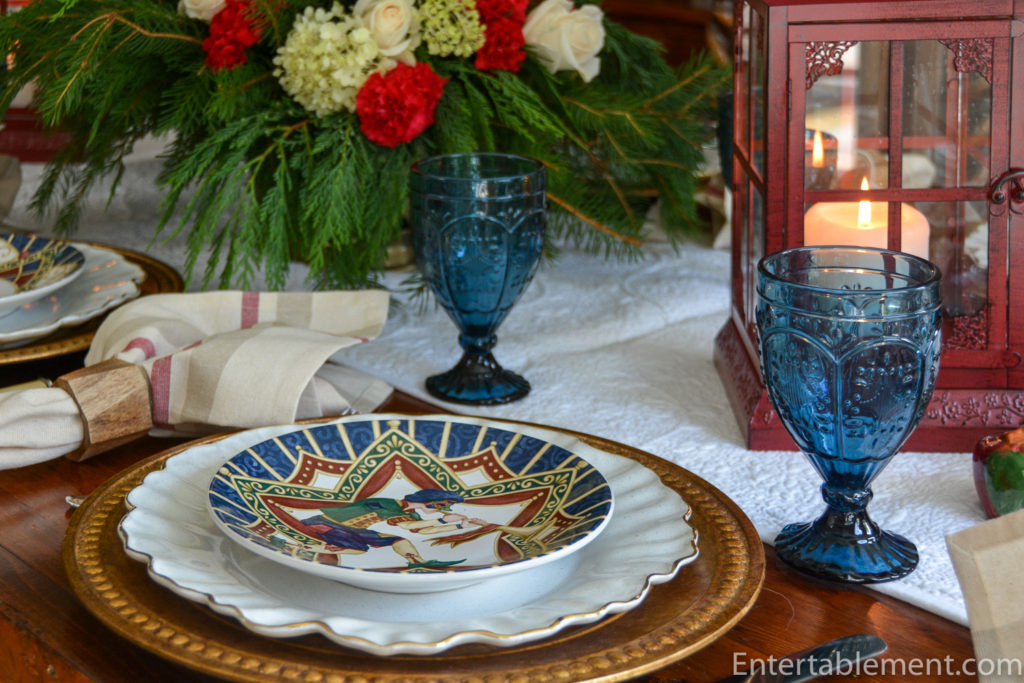 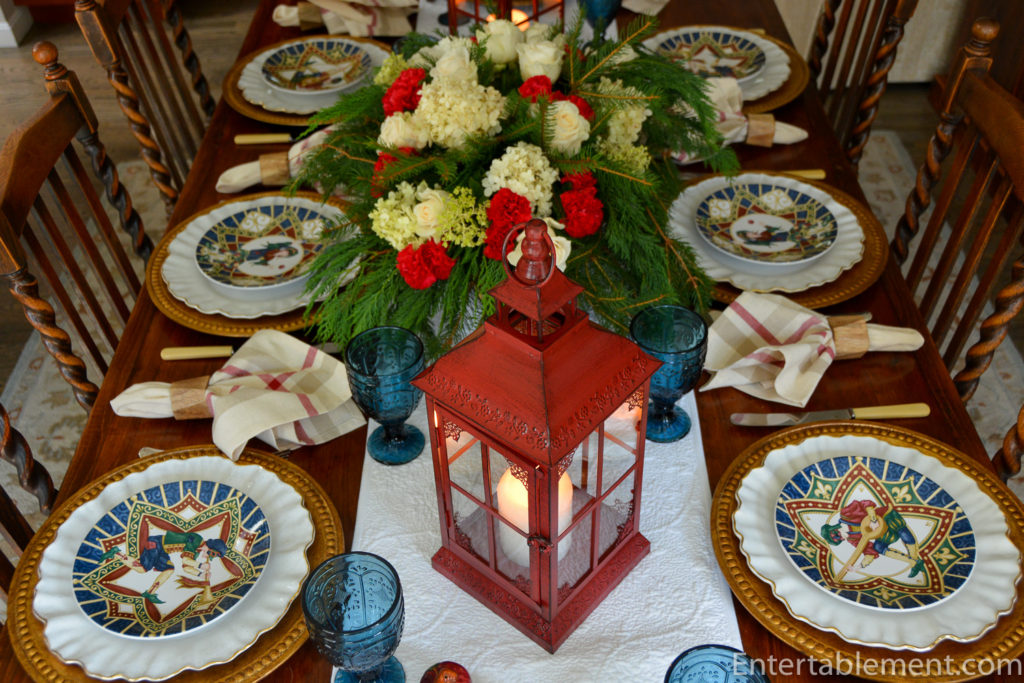 …along with the patterned napkins from Wayfair and the carnations in the centrepiece. I always think of carnations as winter flowers – don’t know why. Perhaps because my mother had them for her bridal bouquet and they got married in very late December. 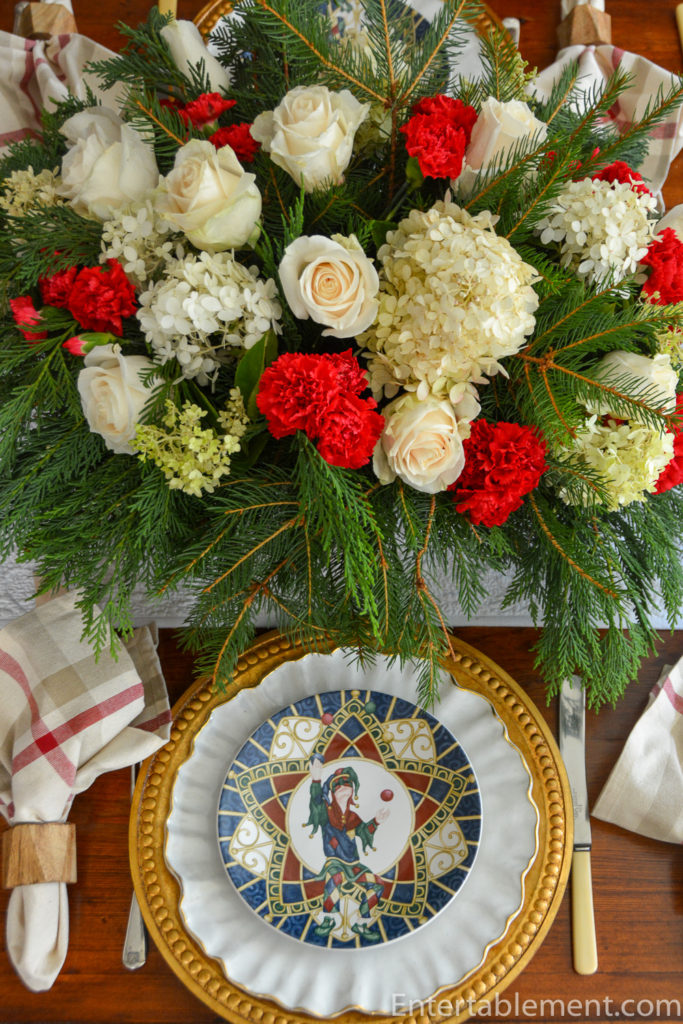 Williams Sonoma came out with these ruffled plates this year. They’ve got a grainy texture similar to a stoneware plate, but the bit of gold on the edge of the ruffle provides a touch of luxe. 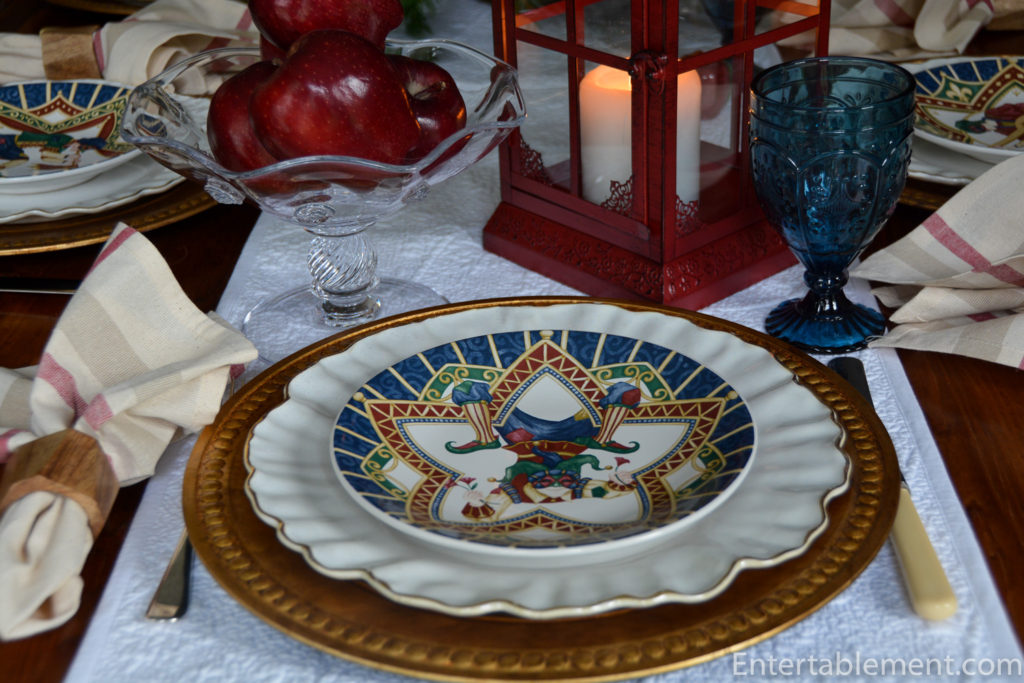 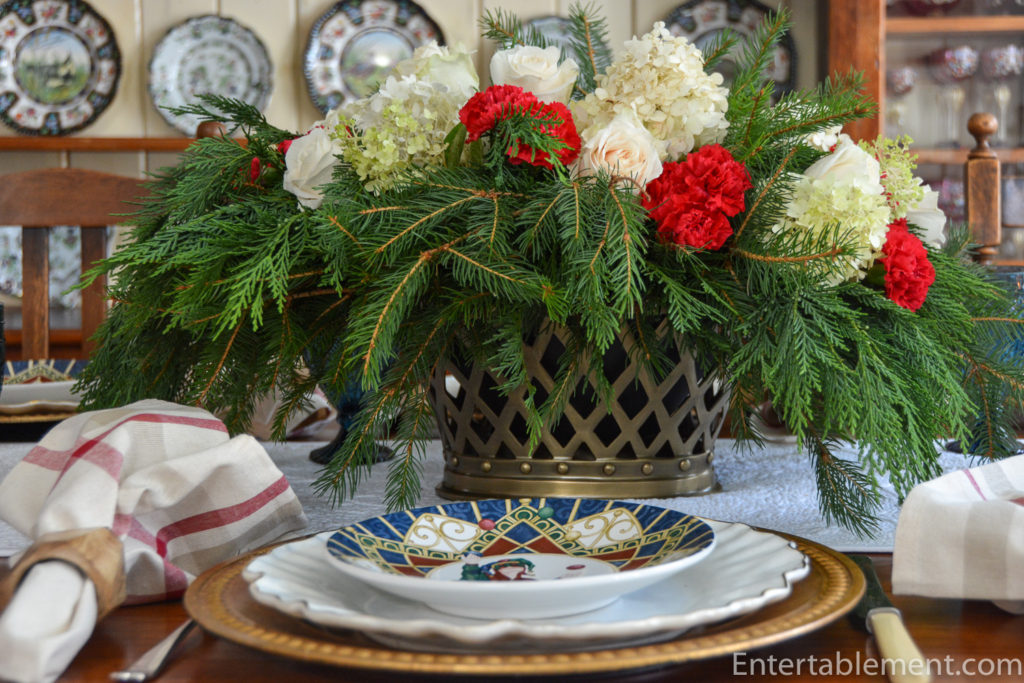 Just for fun, I added in some apples. They seemed an appropriate Royal Holiday accoutrement. The salt and peppers are part of the Apple pattern by Franciscan. 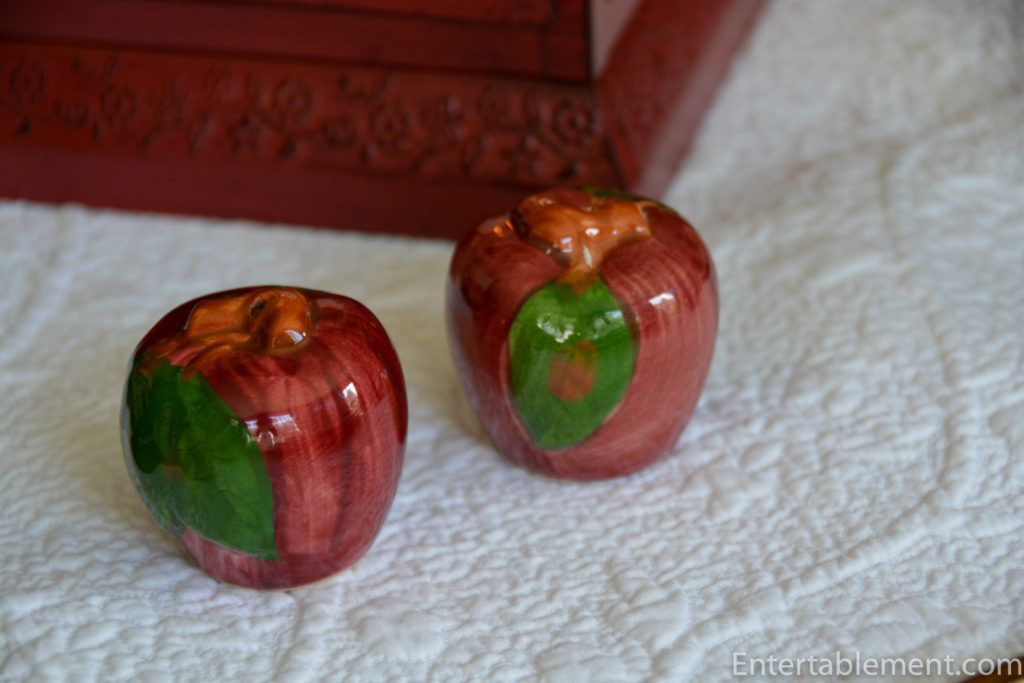 I liked the look on the plates, too. 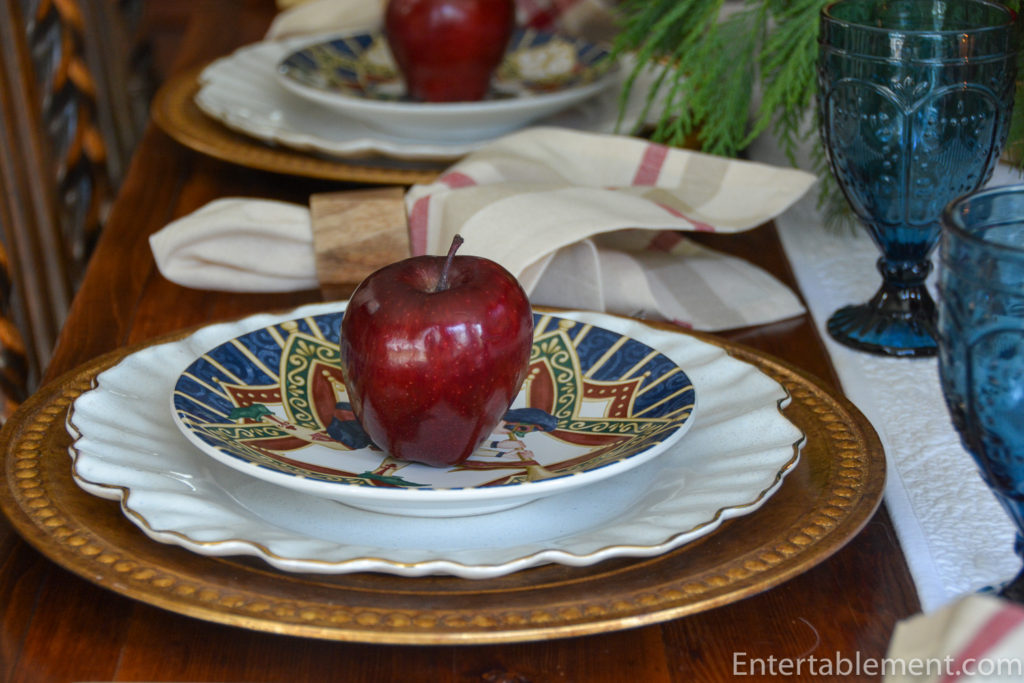 What do you think of our Court Jesters?  Wouldn’t they be great entertainers at your next holiday soiree? 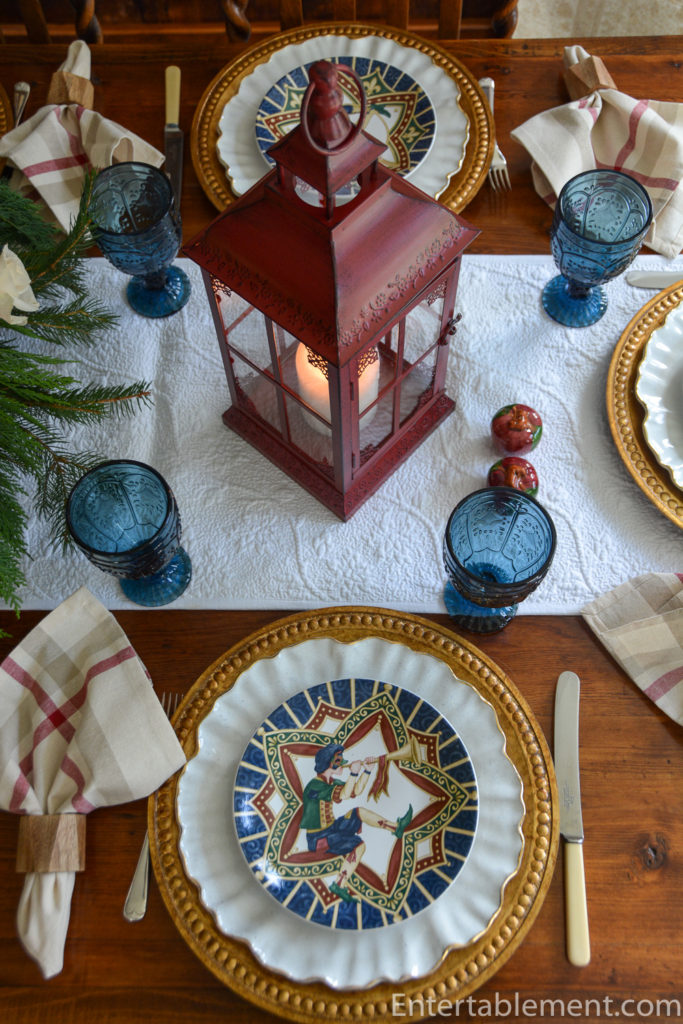 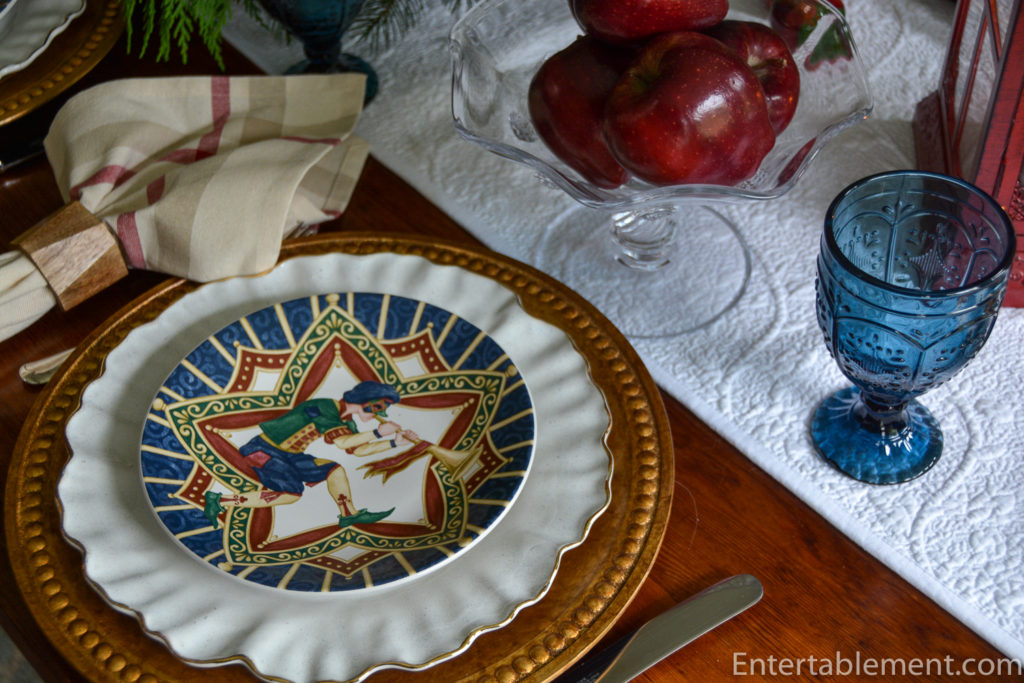 Happy Thursday, everyone. Only a couple of days left in November and then we’re into full holiday preparation mode. We did a lot of decorating before we left for England, but I decided against putting up the trees, knowing full well that the combined efforts of Clementine and Dundee would outstrip the pet-sitter’s desire to continually replace ornaments. Can you imagine? It’s going to be a challenge when we get back.