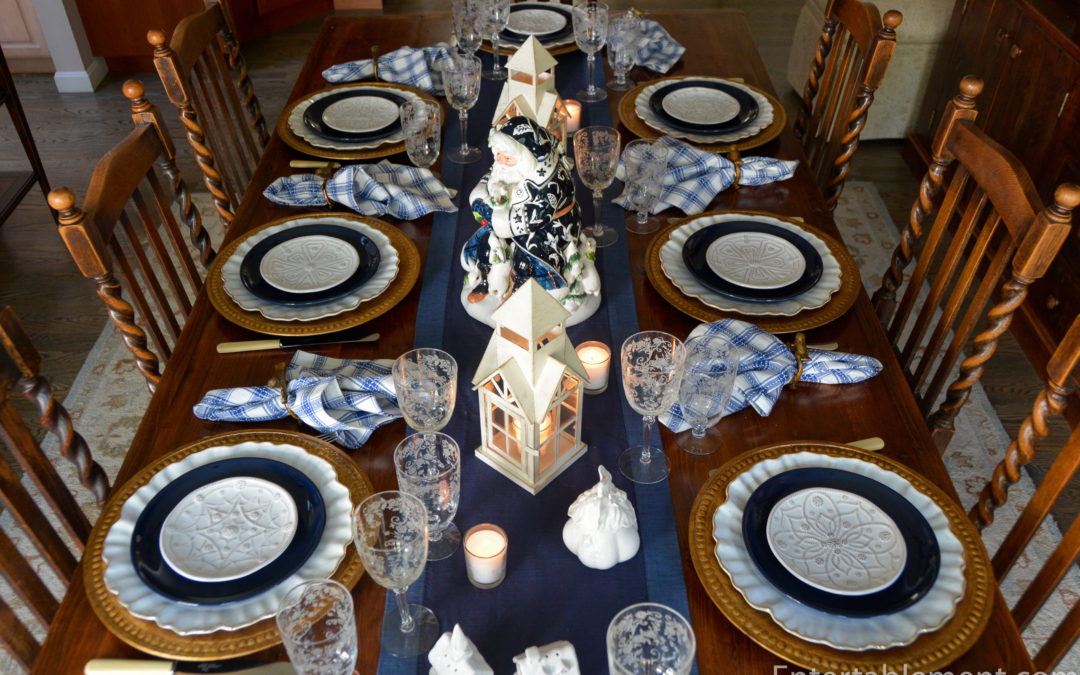 Tablescape inspiration comes in all shapes and sizes, including a jolly old elf. Especially when he’s cuddling adorable woodland creatures. 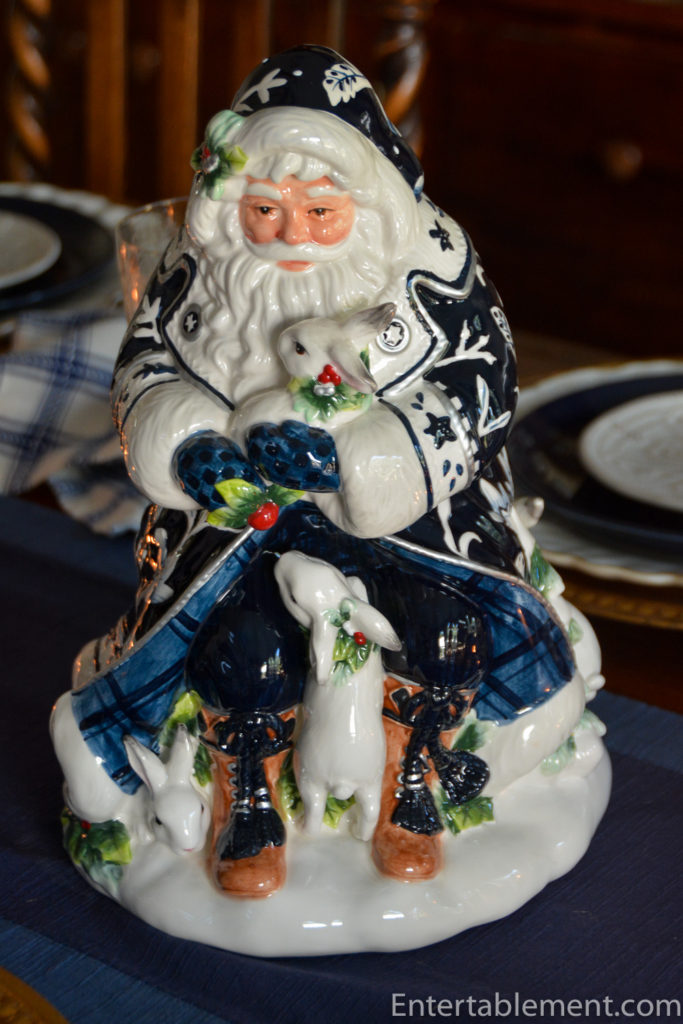 Bristol by Fitz and Floyd is still an active pattern. though it’s getting harder to find the pieces in the retail market. I already had some of the creamy white serving pieces which I had used in an earlier table with Wedgwood Shell Edged plates. Here is the water jug. 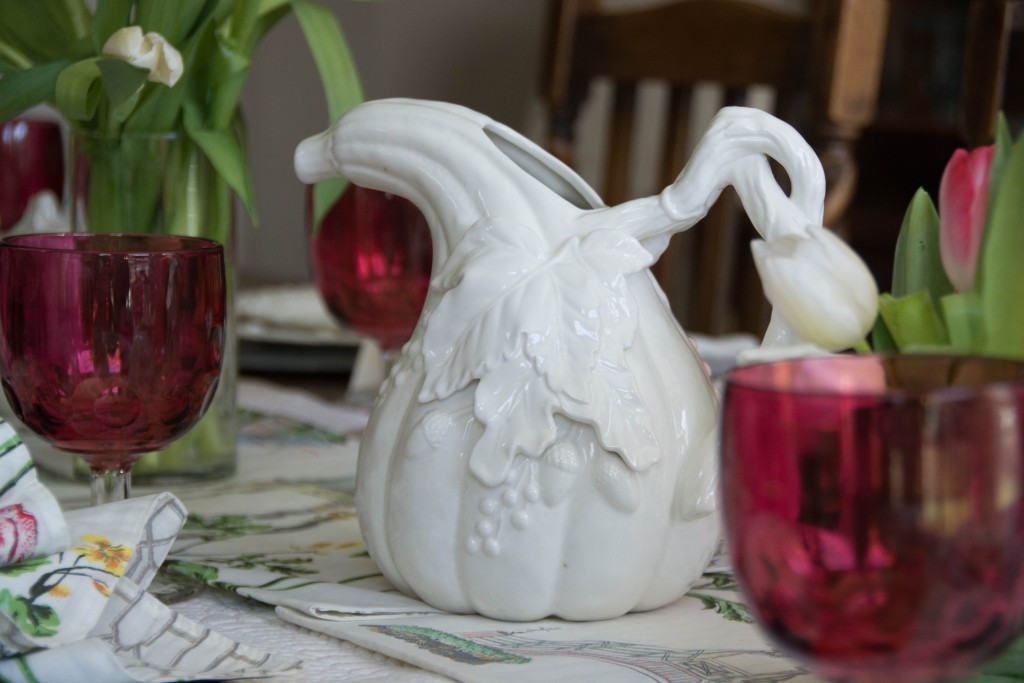 And the individual soup tureens. They’re very reasonably priced and useful in so many different tables. 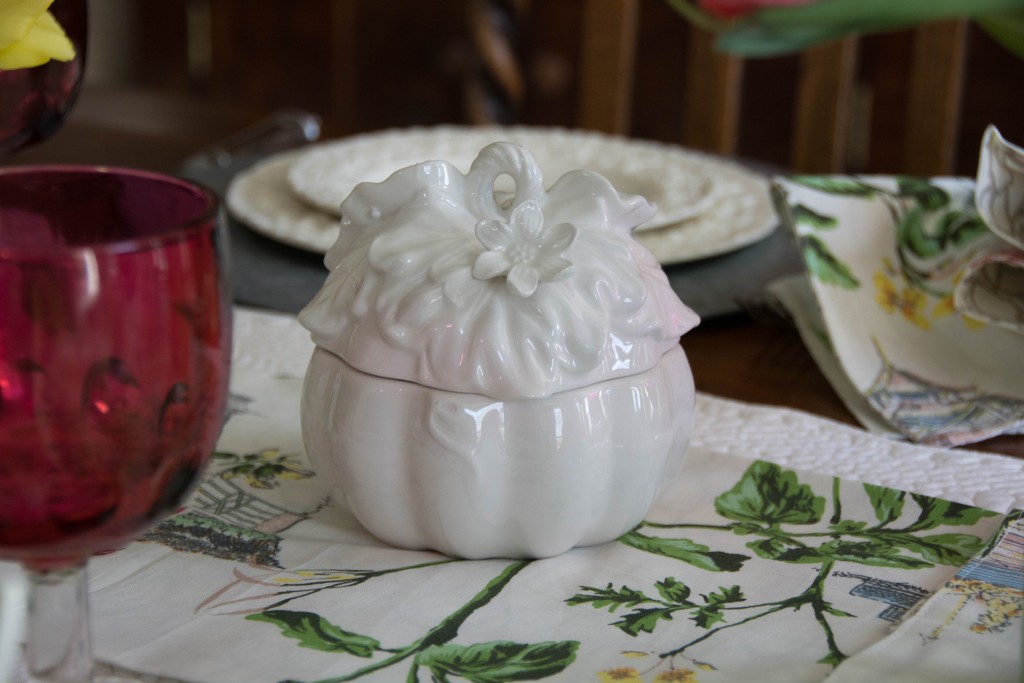 But the cobalt blue aspect of Bristol was a new discovery. There are several Santa and Reindeer options; I confined myself to the cookie jar, and employed cobalt blue and cream pieces I already had from other patterns. 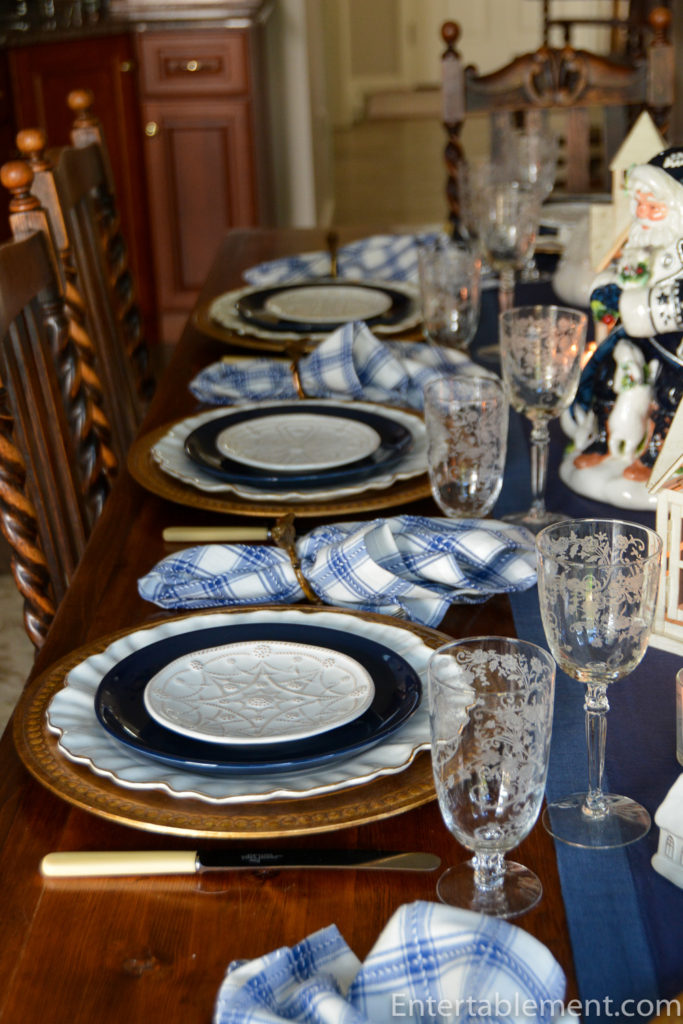 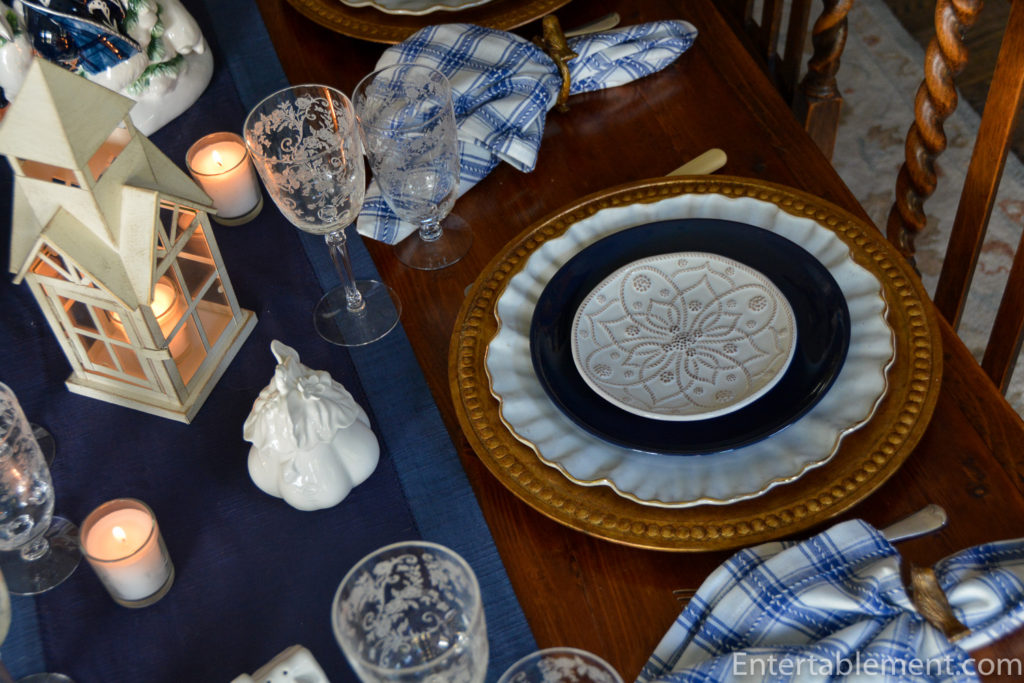 The top plate is one of four different cocktail plates in Jardins du Monde from Juliska. The plates are no longer offered by Juliska but can be had from various stockists. 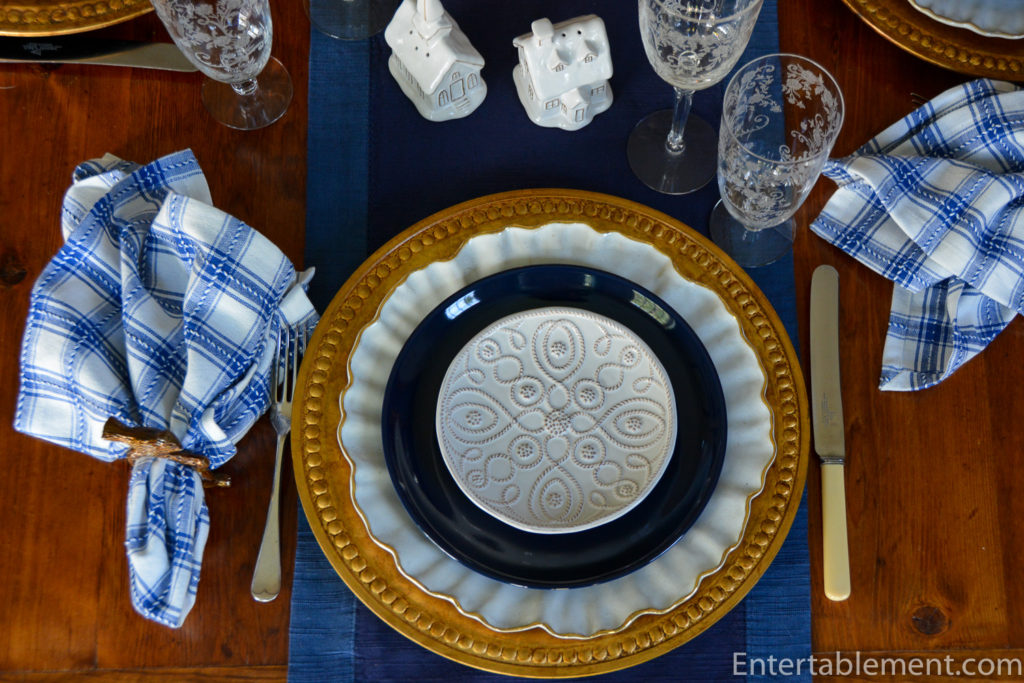 Back to Santa. He’s surrounded with squirrels, foxes and rabbits. I knew my “blue” daughter, Kirsten would love him and her two little girls would be enchanted by the animals, so after his starring role in this table setting he moved to her house. 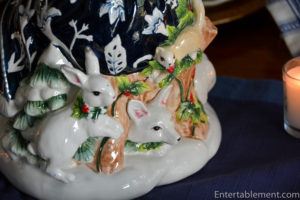 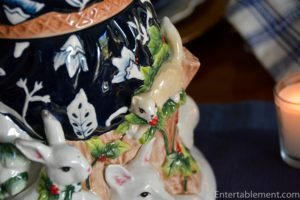 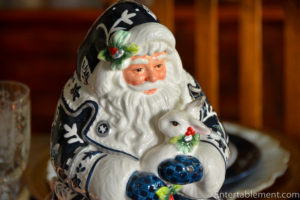 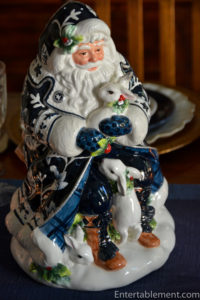 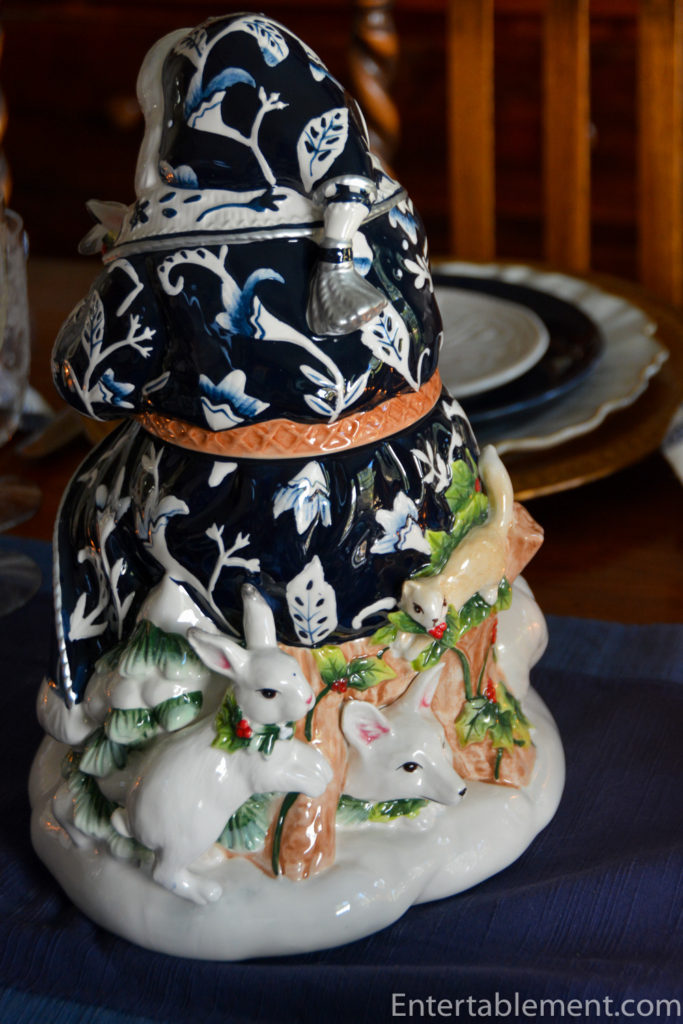 I was intrigued by the attention to detail, right down to the checkered pattern on his mitts and the inside of his coat,

During his sojourn in Cape Cod, he rubbed shoulders with other Bristol pieces and Pier 1 house lanterns from a couple of years ago. 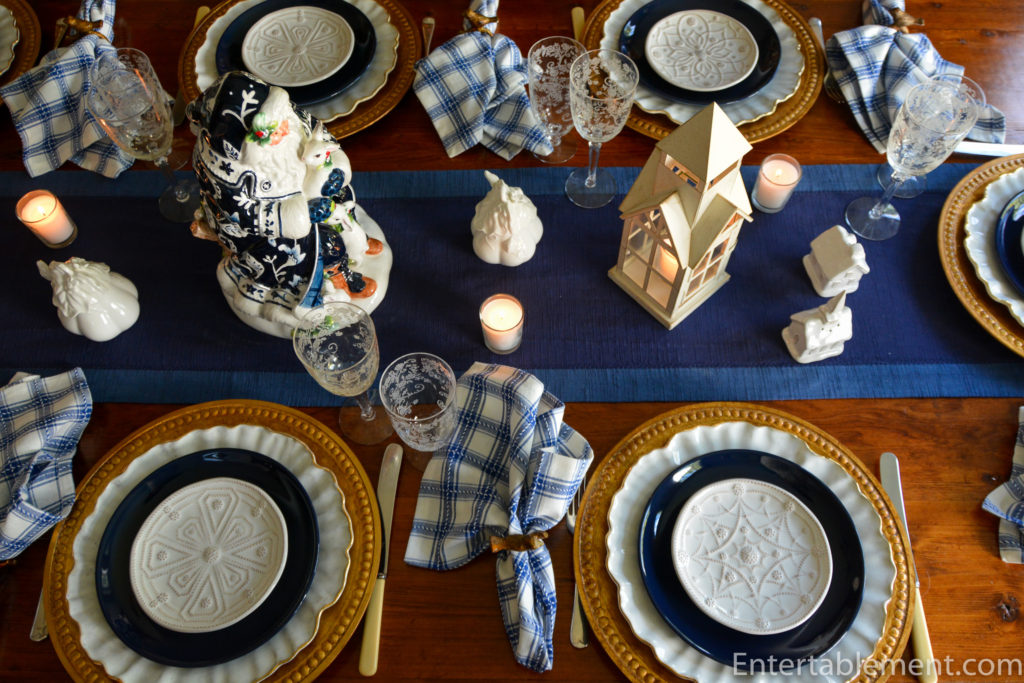 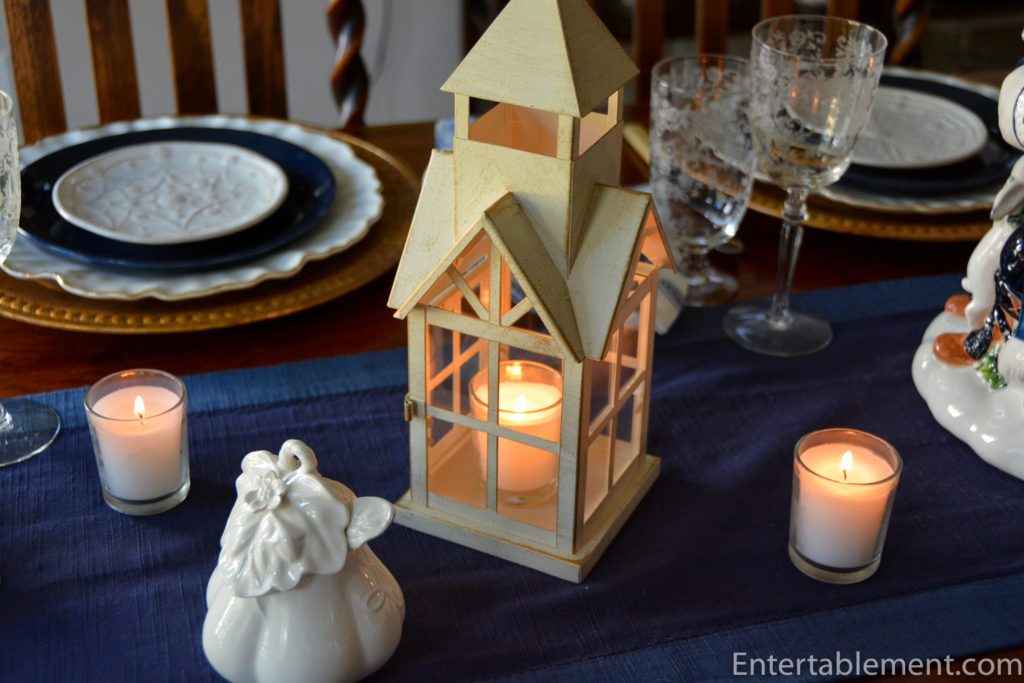 Some church and house salt and pepper shakers (e-Bay) tied in well with the other creamy bits. 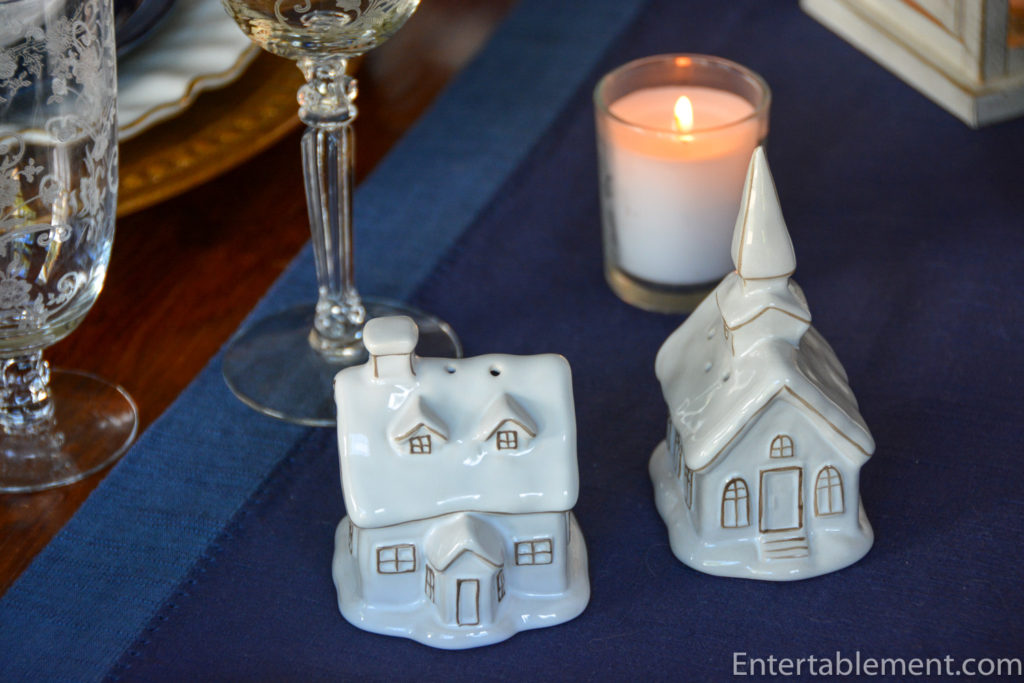 The gold-rimmed chargers coordinated with songbird napkin rings for a touch of warmth. I debated the napkins for a while. 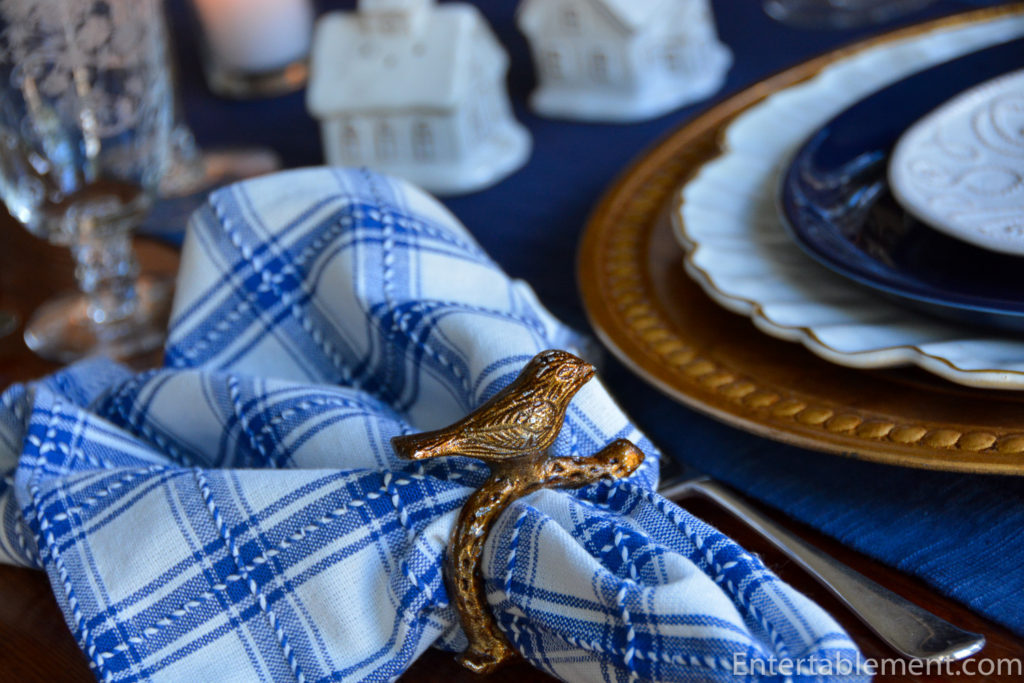 These blue and white ones seemed a bit nautical, but I decided to include them. I think they go. What do you think? 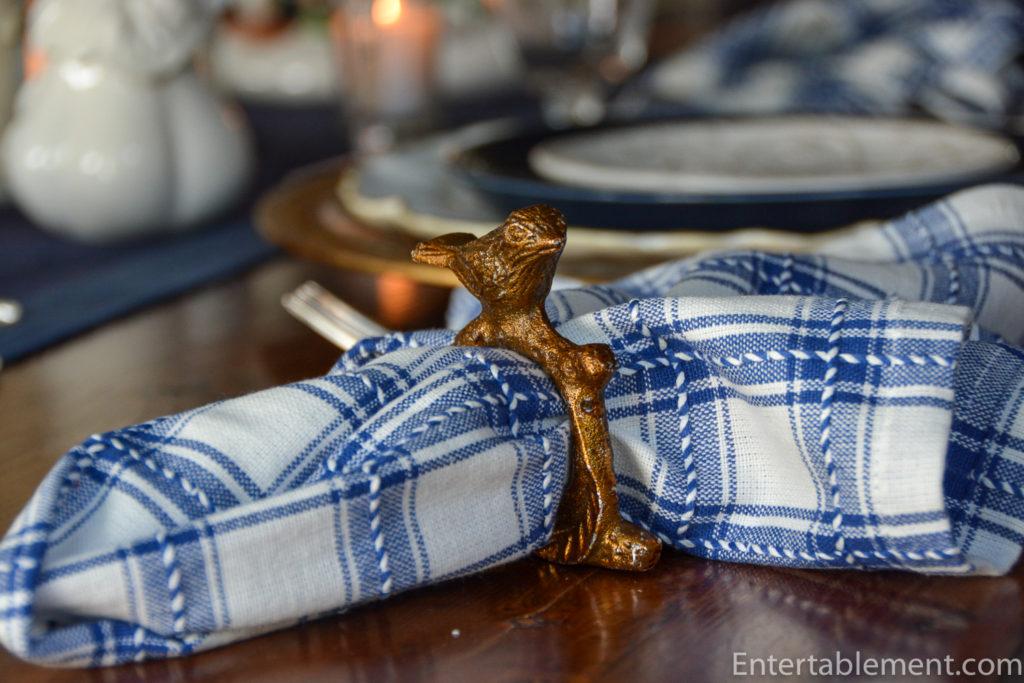 The Depression glassware is Buttercup by Fostoria. It was actually produced between 1942 and 1959, but it fits the “Depression Glass” genre. These two are the water glass and the iced tea glass. It’s one of my very favourite patterns for regular use, as the wine glass is just so darned comfortable in the hand. It holds a nice quantity of wine without being excessive, and the glass is well balanced. Just love it. 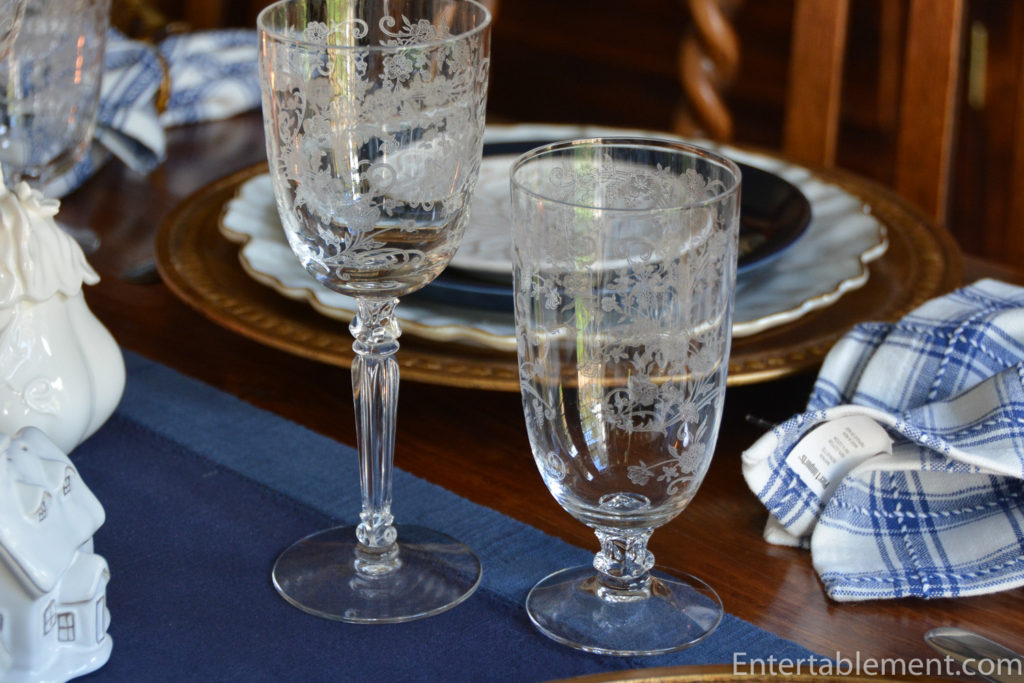 Such a happy table! 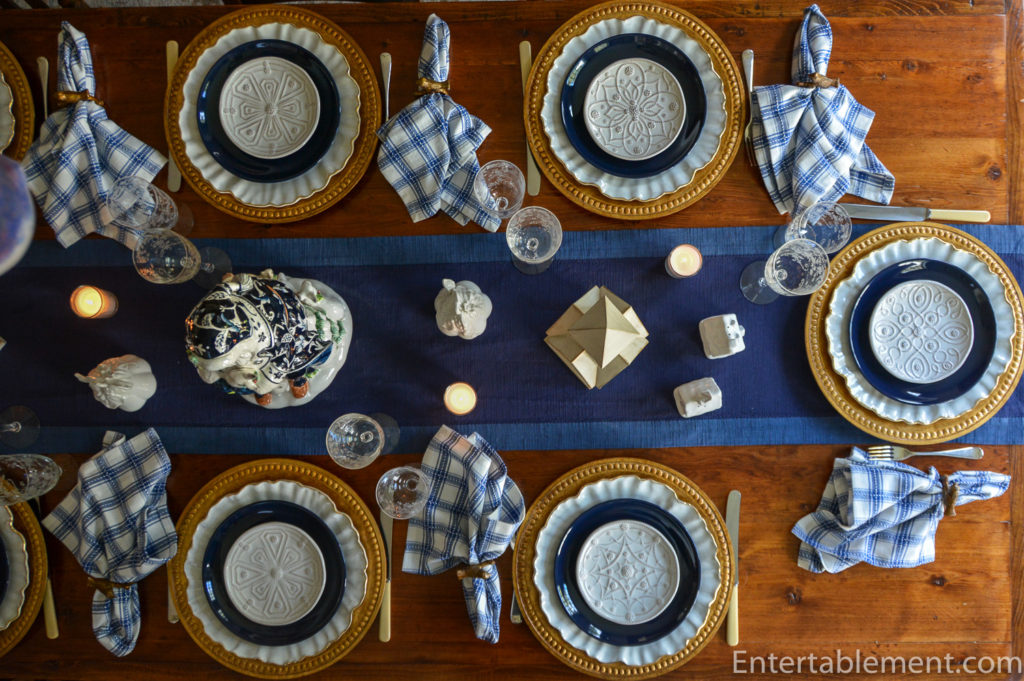 Thanks for visiting, Santa. I know you’ll love it at Kirsten’s house, where you’ll be very much loved. 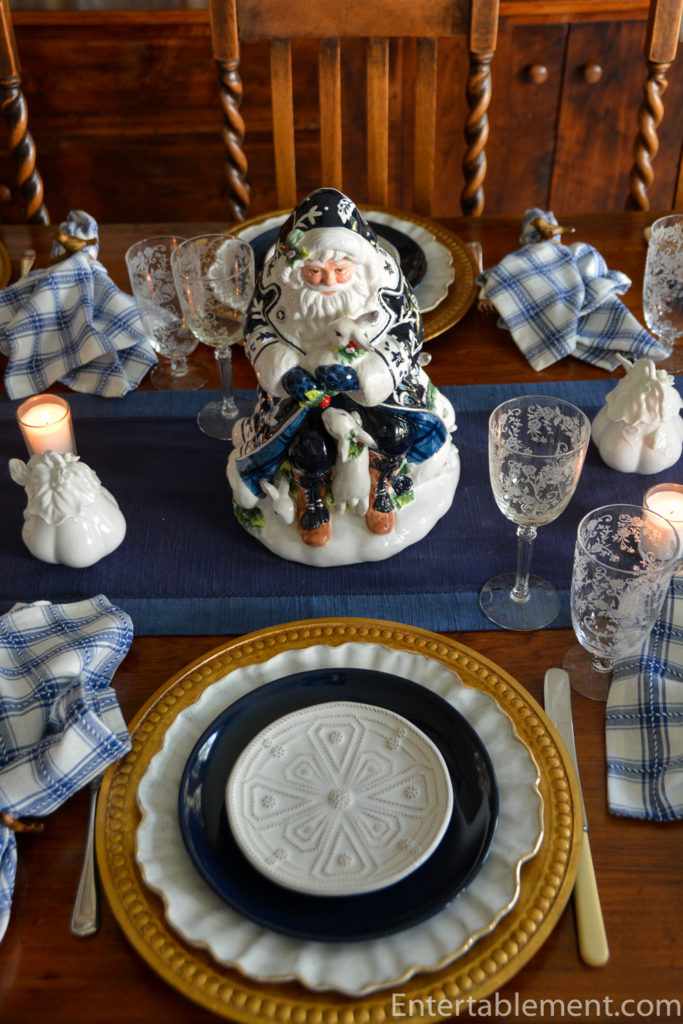 How is everyone’s preparation for Christmas going? Under control or feelings of mild panic? It doesn’t seem to matter how much one plans in advance, there are always last minute changes that come up, and it takes some mental bobbing and weaving to fit it all in. We have the added chaos of two fur-babies this year, Dundee and Clementine, both determined to join in ALL the fun. As well, we get a lot of dust and dirt tracked in from the frequent trips outside as Clementine grasps the finer points of housebreaking. Enough said! As I write, she is galloping through the house at top speed, leaping over the snoozing older dogs, chewy toys flying in all directions. Dundee, who was wrestling with her earlier, has fled downstairs out of the way of the thundering and increasingly enormous paws. Nuts, I tell you. Nuts. It’s wonderful chaos, though. 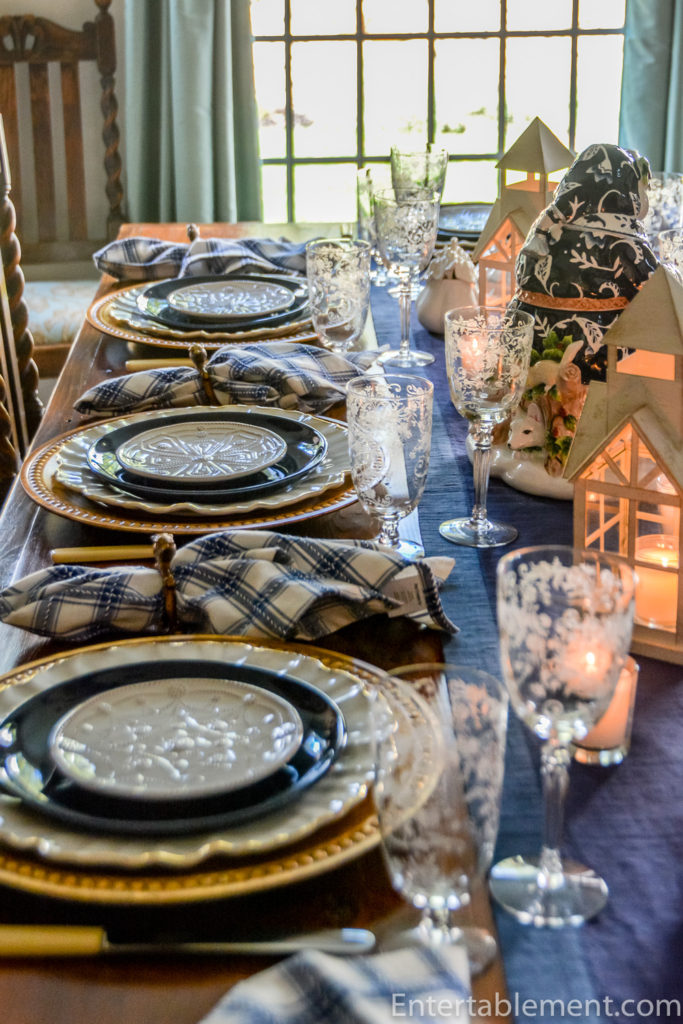 Enjoy the final weekend before Christmas, everyone.