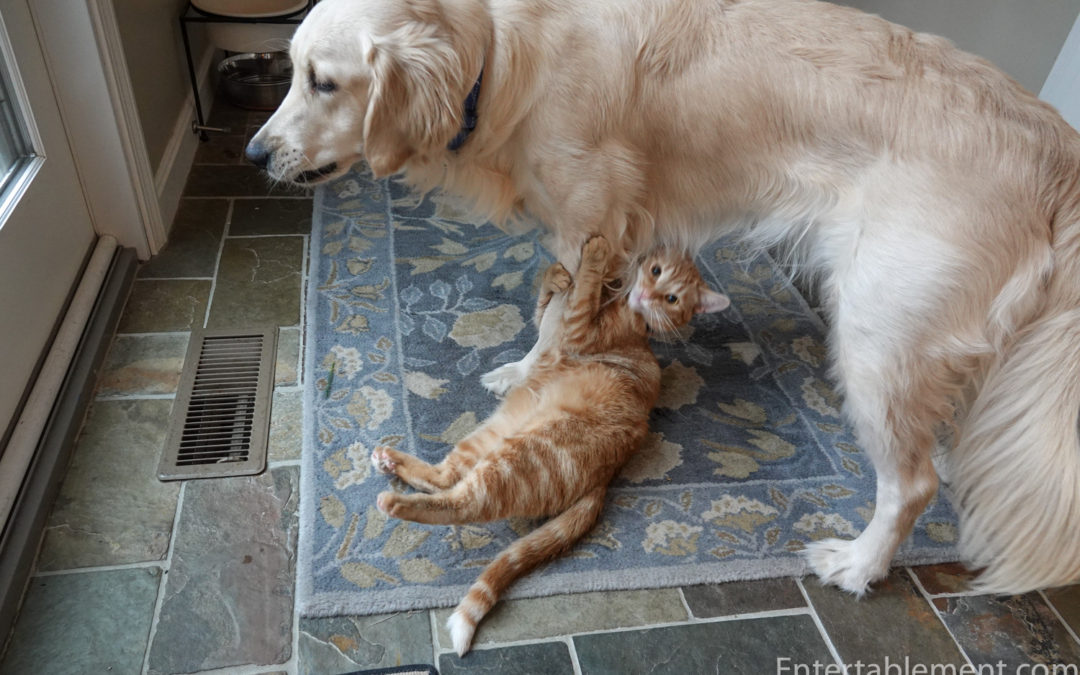 She’s a lively, little imp, our Clementine. Though she’s over a year now, her energy is still boundless. There is a whirl of activity most mornings as she wrestles with  Churchill. 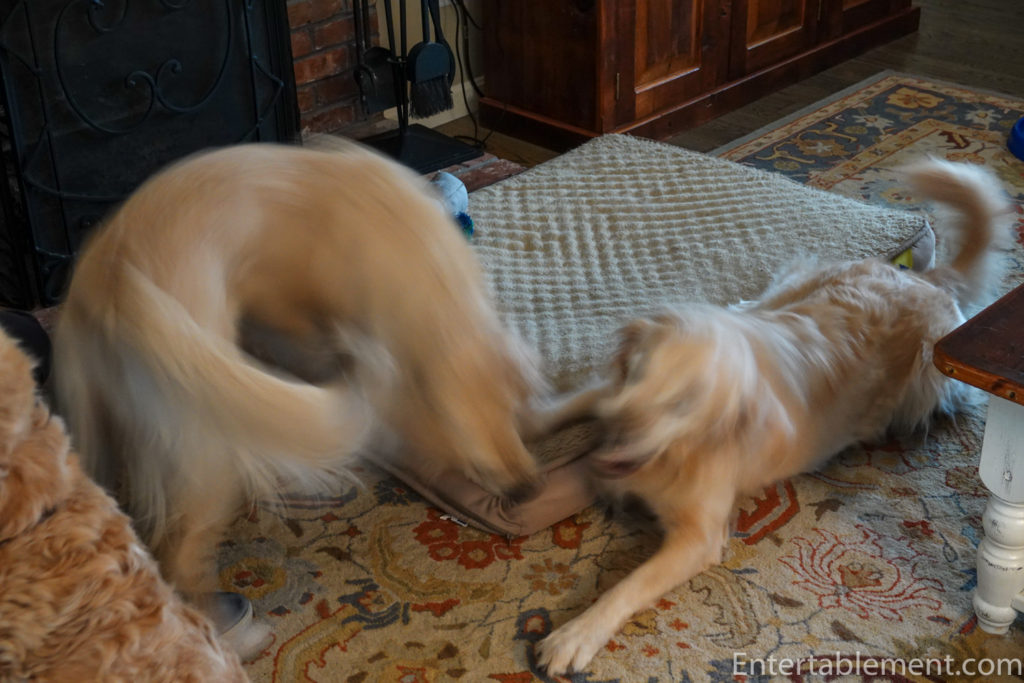 Her walking on the leash is much improved and she’s graduated to the gentle leader. She’s still pretty distractable, though, particularly if she senses there might be FOOD lurking anywhere.

Wait, wait. I think I smell something to eat!! 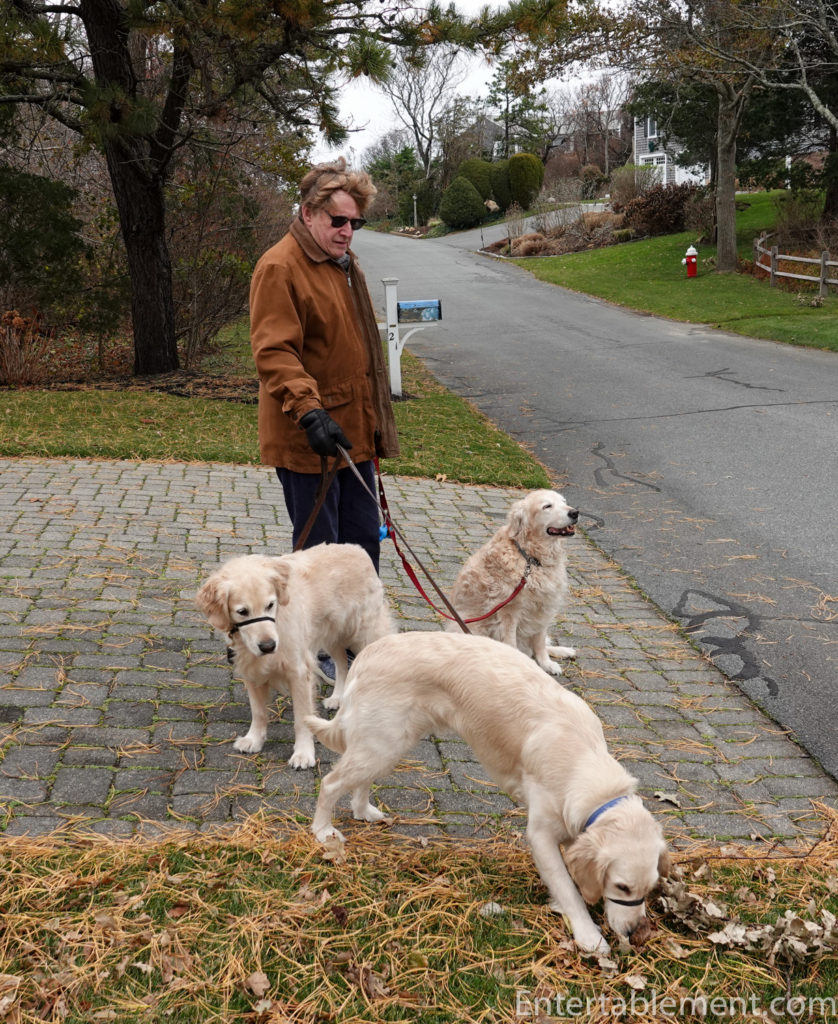 She walks calmly, leaning in to chat with Churchill from time to time. 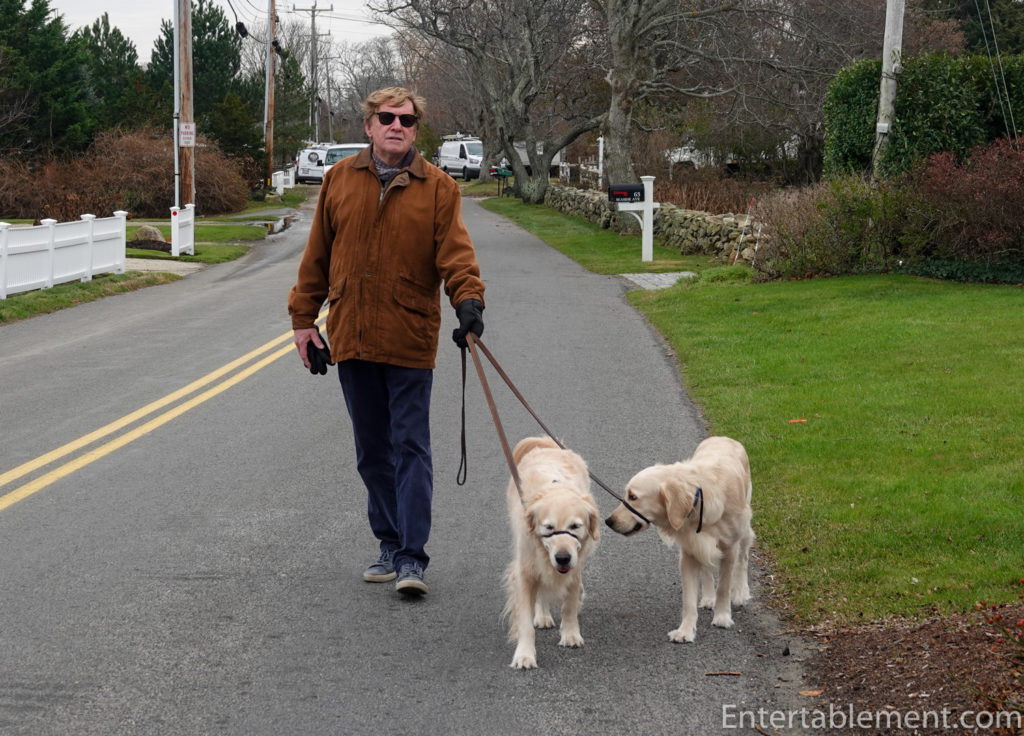 Our biggest challenge with Clemmie, however, is the food bowl. She attacks it with almost crazed vigour. I’ve never seen anything like it. The rest of our goldens have always had hearty appetites. As a breed, they’re very food-motivated. A good thing, too, as you can distract them from hurling themselves at other dogs to say hello. Just step to one side, hold out a treat and you have their unblinking focus.

While her dinner is being prepared, Clemmie sits, eyes riveted on the action, front feet dancing with excitement. Once the bowl hits the ground, she hurls herself at it like she’s never seen food before. Something had to be done.

Here is a video:   Clementine Attacks Her Food Video

A bit of research online revealed that this was not an uncommon problem. Hearing other pet owners describe the frantic eating of their pets and the resulting issues made me laugh until I cried. The solution? A maze bowl, oddly enough. The dog has to work at getting the food out of all the little crevices and that slows down the pace of inhalation. I’d have thought it would frustrate the life out of Clementine, but no. She loves it. 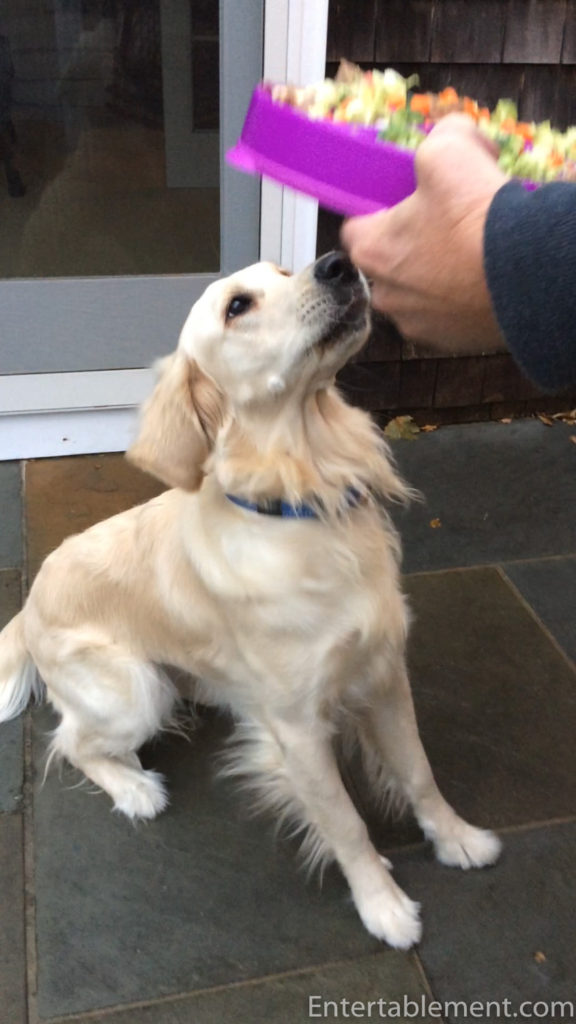 This one is the wangstar Pet Slow Feeder Bowl, Bloat Stop Dog Puzzle Bowl Maze, Interactive Fun Feeder Slow Bowl with Anti-Skid Design” (Do you think they have enough keywords in the description? Good grief.) 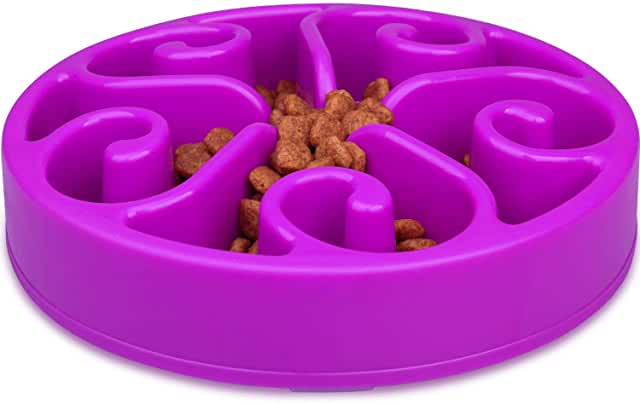 There was a dizzying number of options on offer, and this one had excellent reviews. For the princely sum of $8.99, it’s very sturdy and the plastic is both thick and tough. The skid-proof bottom lives up to its name. And despite its contorted appearance, it cleans fairly easily. A hearty sloshing with soapy hot water and a J-cloth, followed by extended rinsing in scalding hot water and we’re done. I toss it into the dishwasher every couple of days, too.

Here it is, with the first layer of food added. We feed our guys the raw diet and put the broken up meat patty on the bottom. Not exactly steak tartare, but they seem to love it. 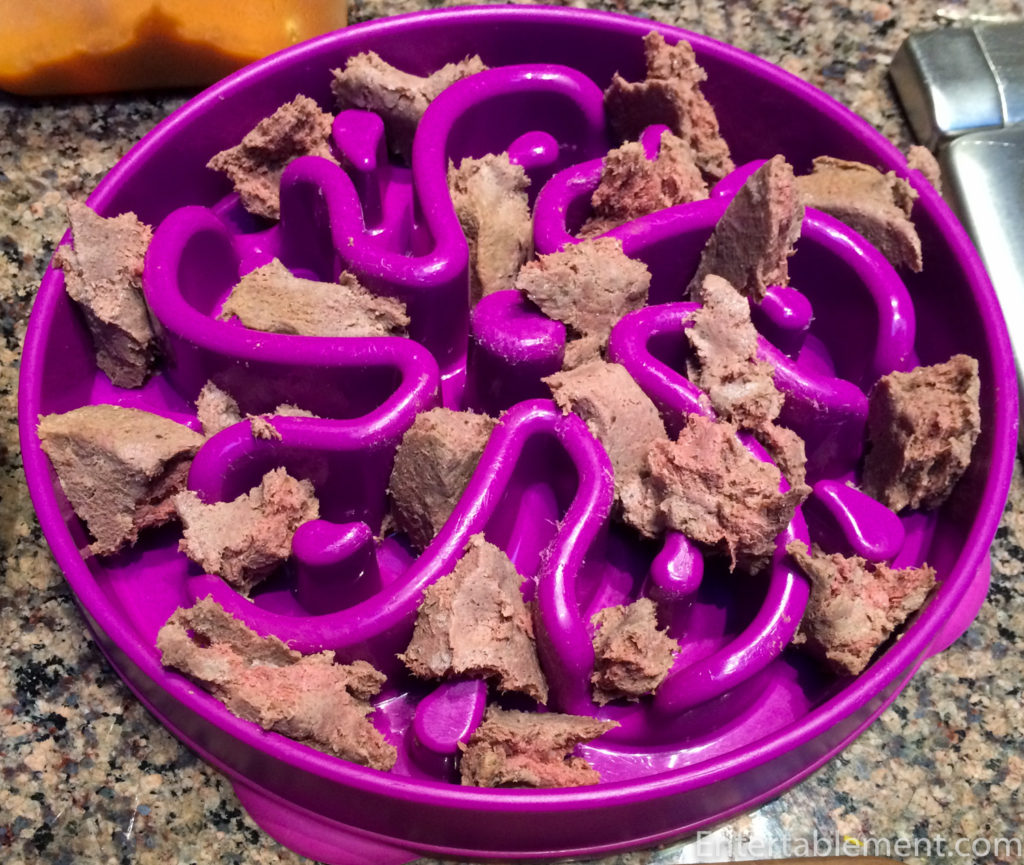 We then add the chopped up carrots, apple, and broccoli. It doesn’t really matter what order we put it in, it all goes down the hatch, but I like to think Clemmie has to work harder at getting the meat out of all the crevices than she does the broccoli. Makes sense! 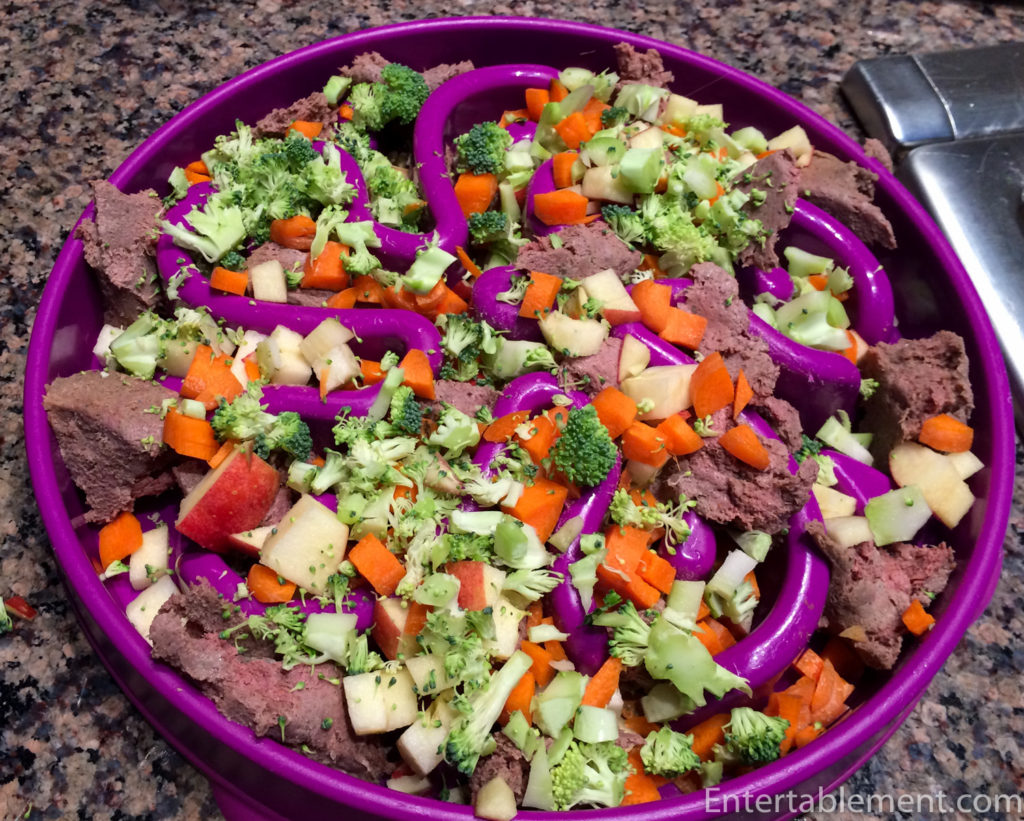 It takes her about 5 minutes now to eat her meal, compared to the approximately 20 seconds it used to take. We have to feed her separately from the other dogs. as it takes them about 2 minutes to finish their meals, and Churchill is not above helping himself to Clemmie’s, while she’s slurping her way through the maze. That doesn’t seem fair – slow her down and have Churchill pinch her food. 🙂

I’ve had a few inquiries about Diabolical Dundee.  He’s grown a bit! 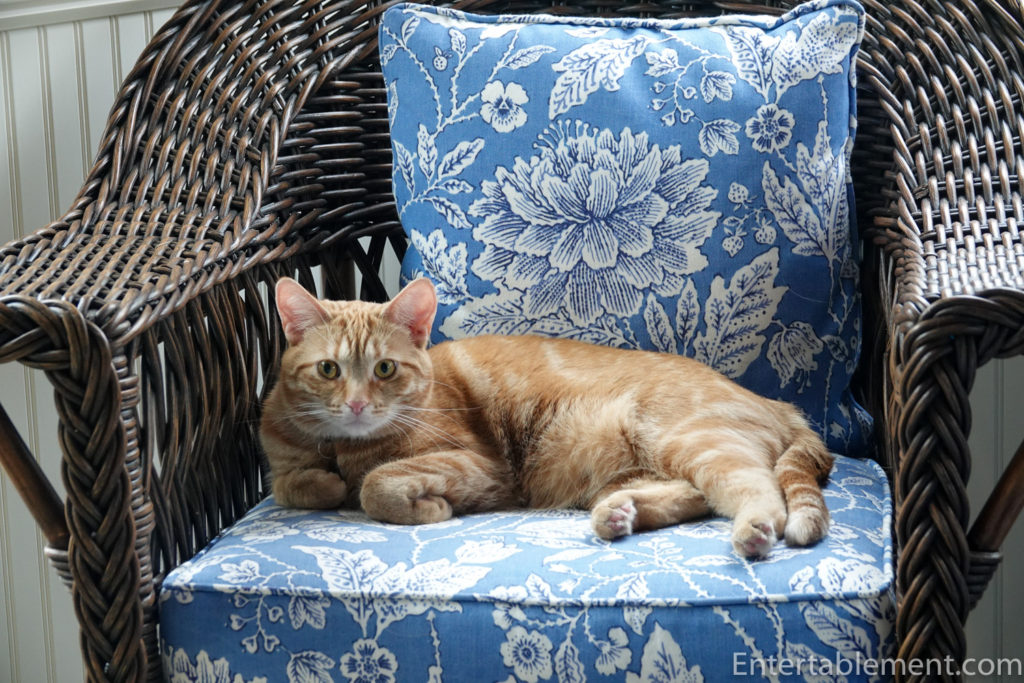 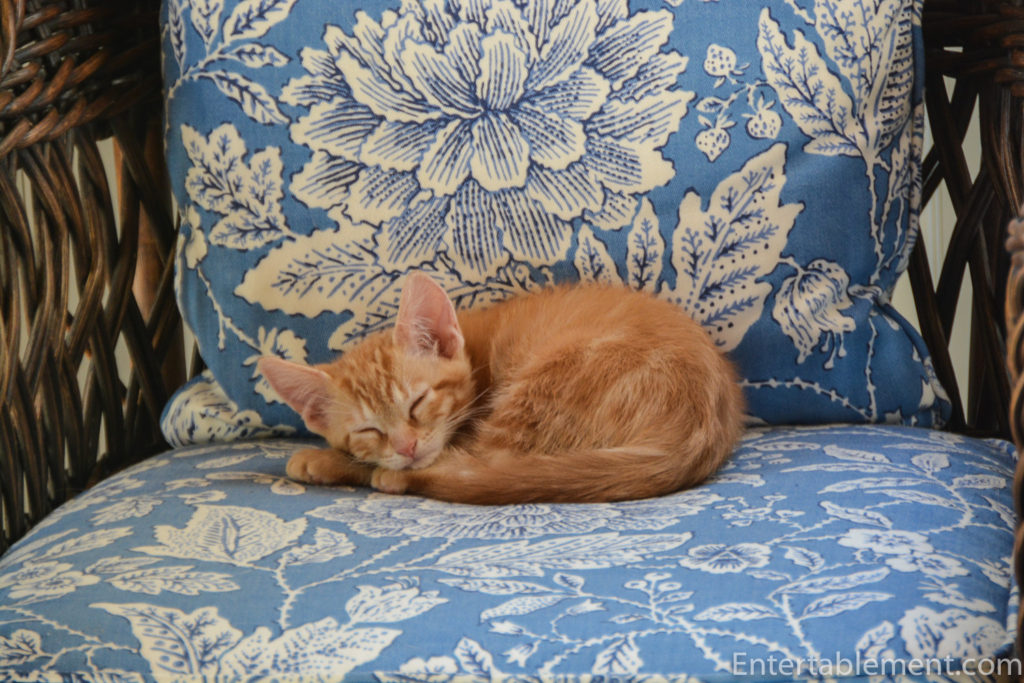 He and Clementine still play together. It’s less frequent, but still fun to watch. Clementine is always up for a wrestle, but Dundee has a bit more dignity these days. And he’s lazier.

What? She started it. I’m just going along for the ride. 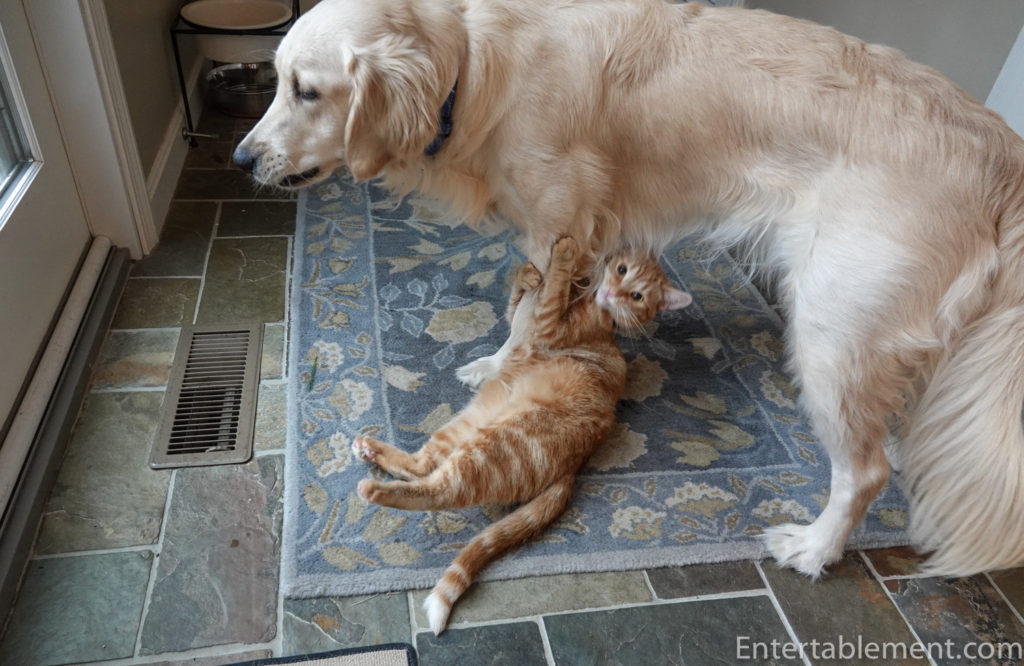 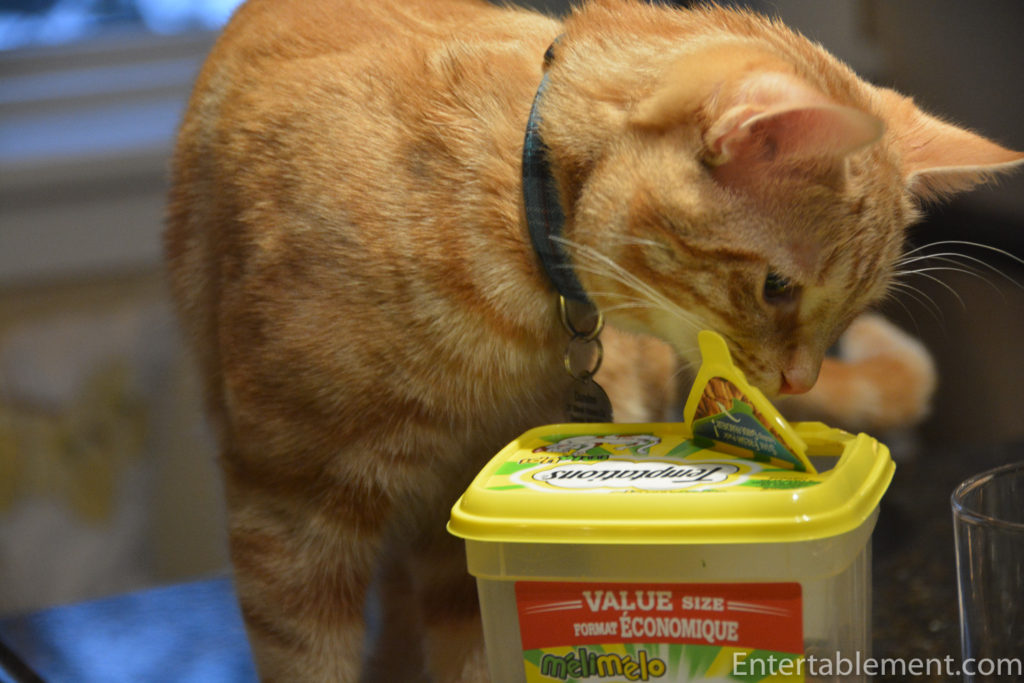 He’s not an outdoor cat, and thus doesn’t get a lot of exercise. And (like Clemmie) his appetite is robust.  Look at those cheeks. 🙂 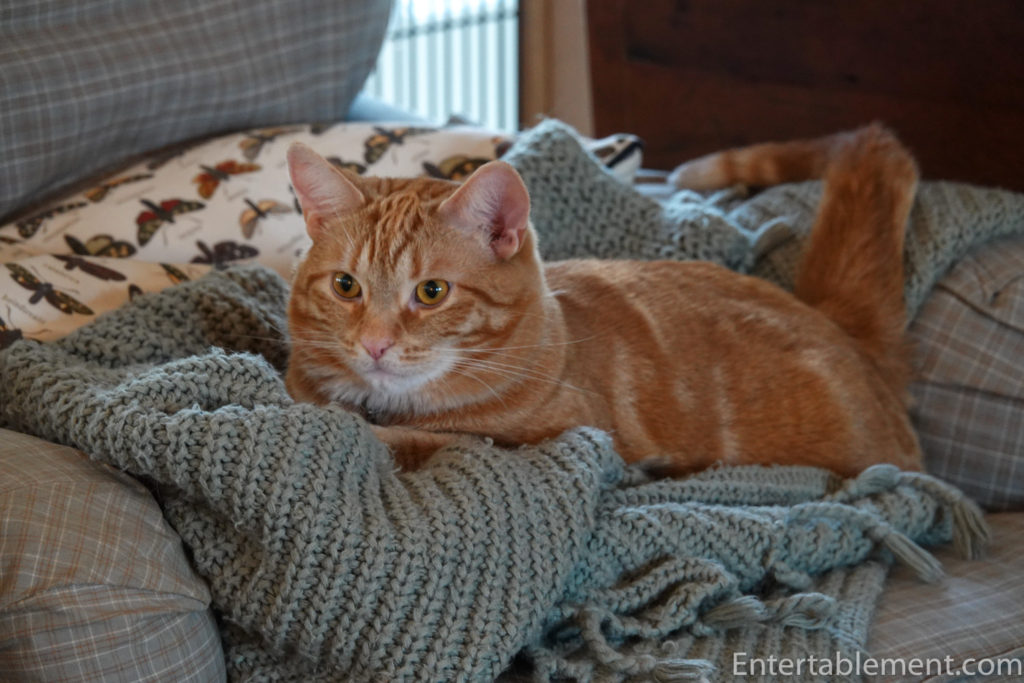 We love ’em all. Until next time. 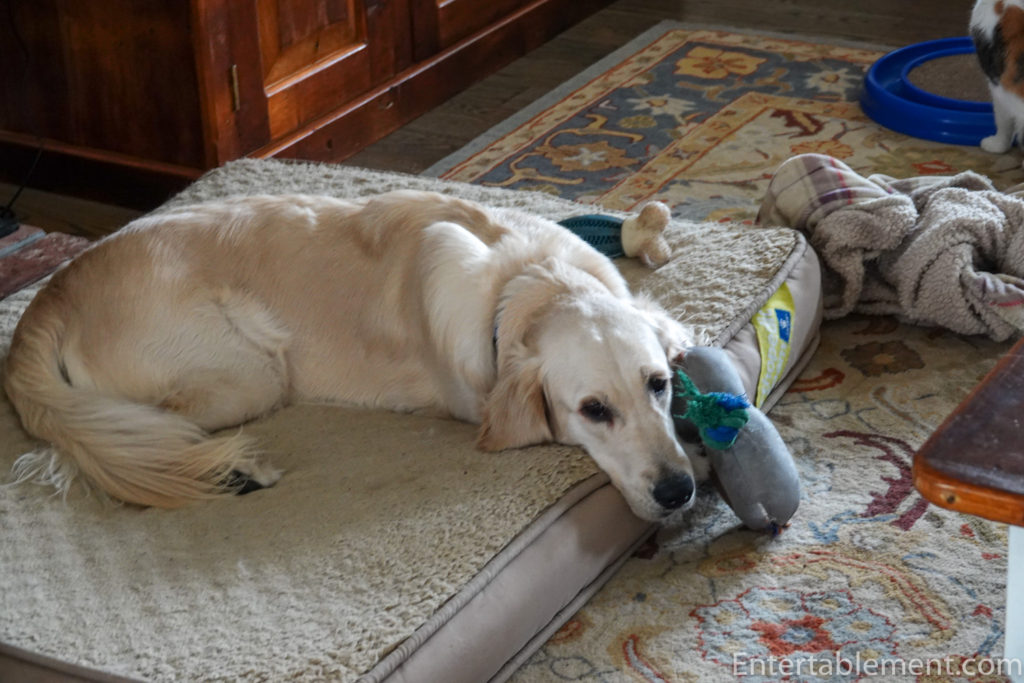 Goodbye, from Clementine and Dundee. 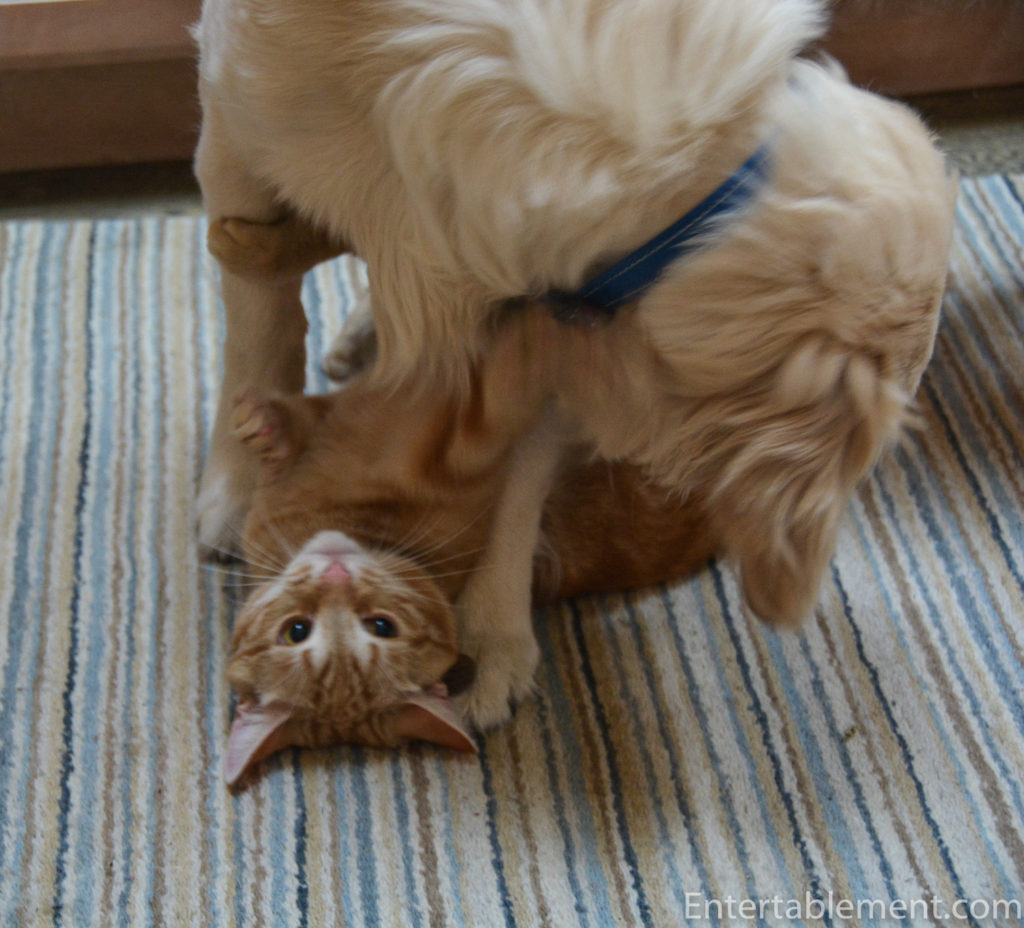 I”m sharing this post with Between Naps on the Porch,