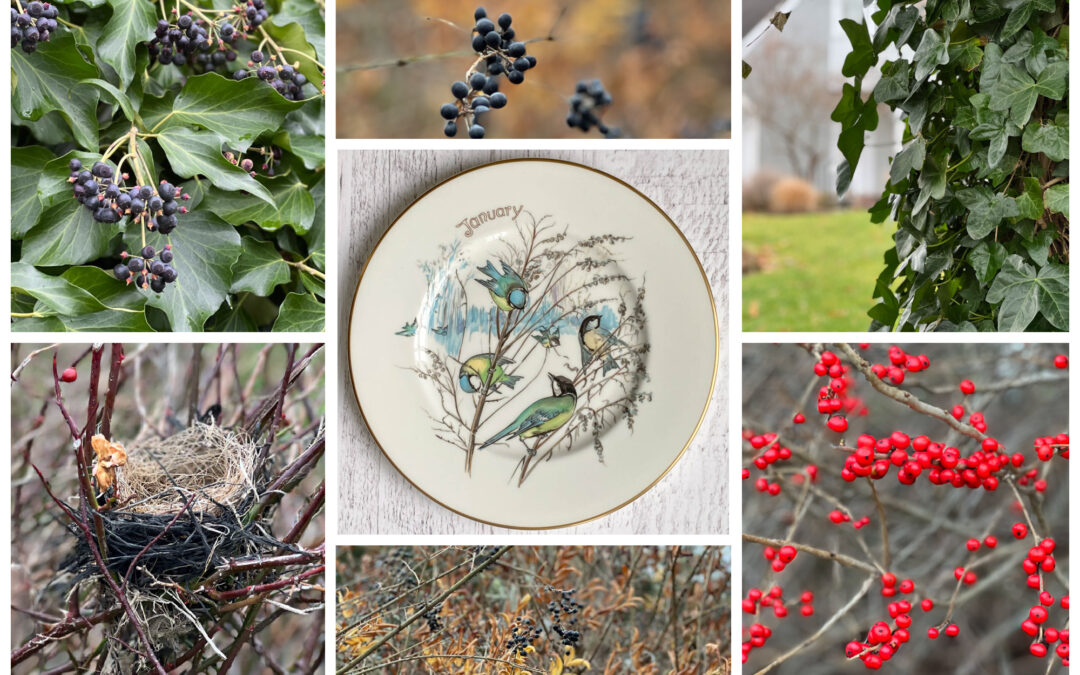 Best known in her own time as an illustrator of children’s books, Edith Holden was a keen observer of nature in all its beauty. The publication Nature Notes of an Edwardian Lady is Edith Holden’s journal for 1905. 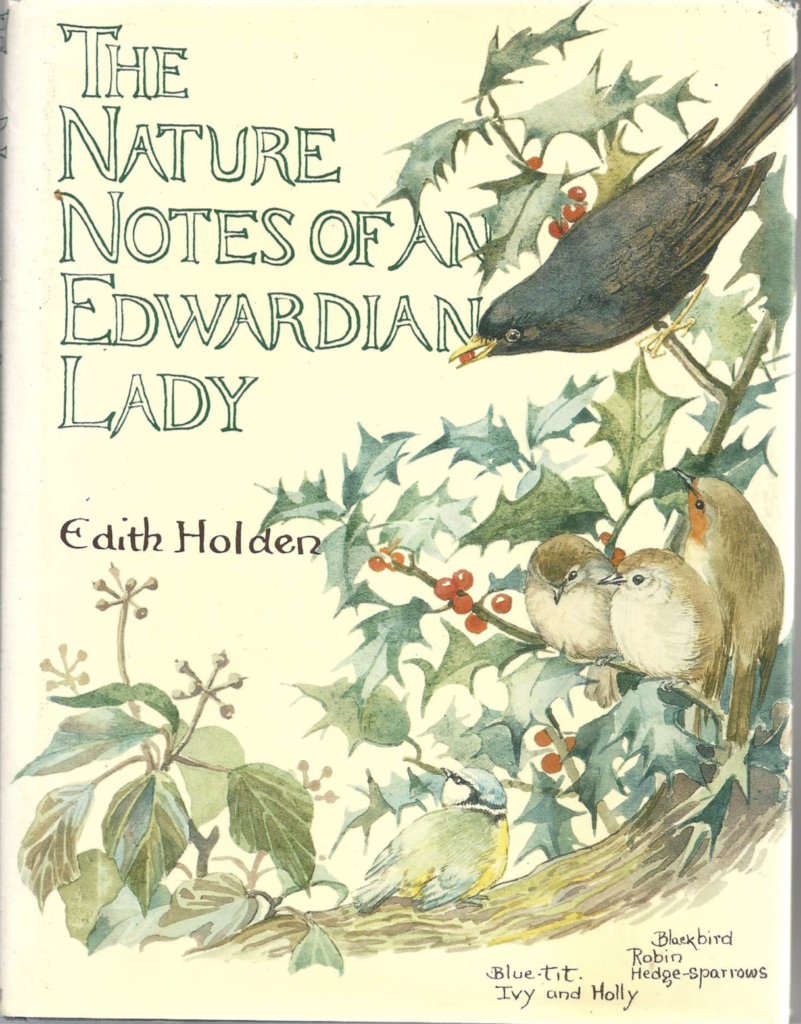 Throughout the year, she jotted down her thoughts and quoted poetry, creating lovely watercolour illustrations of birds, animals, plants and insects from her native Midlands and visits to Devon, UK. 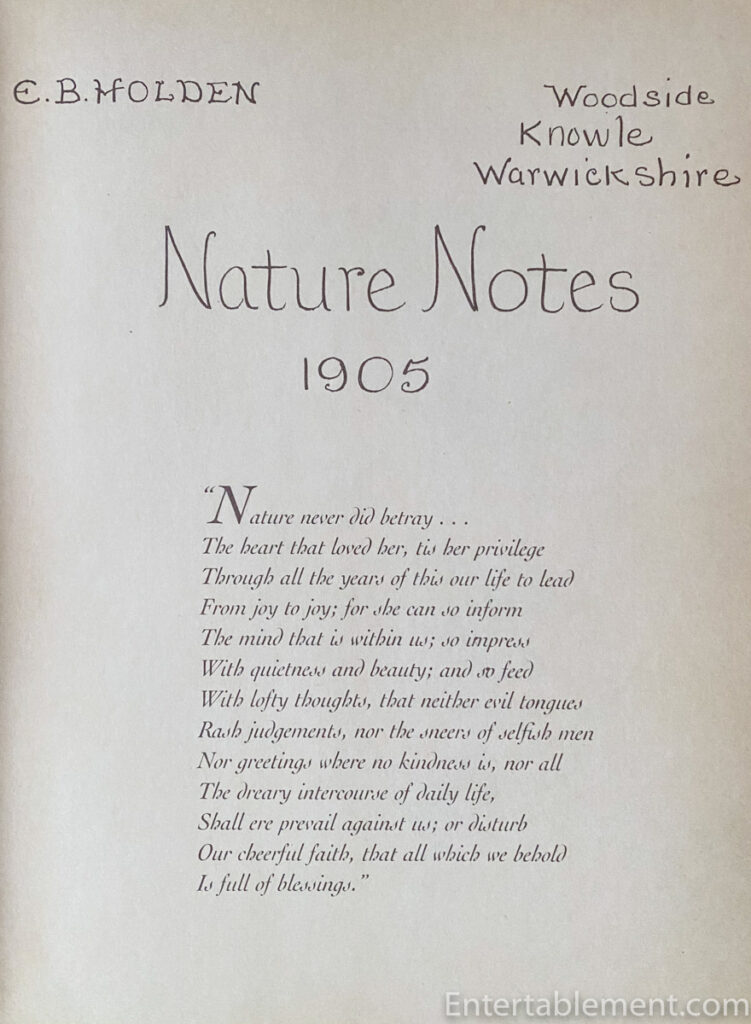 One can’t help but be captivated by the exquisite illustrations. 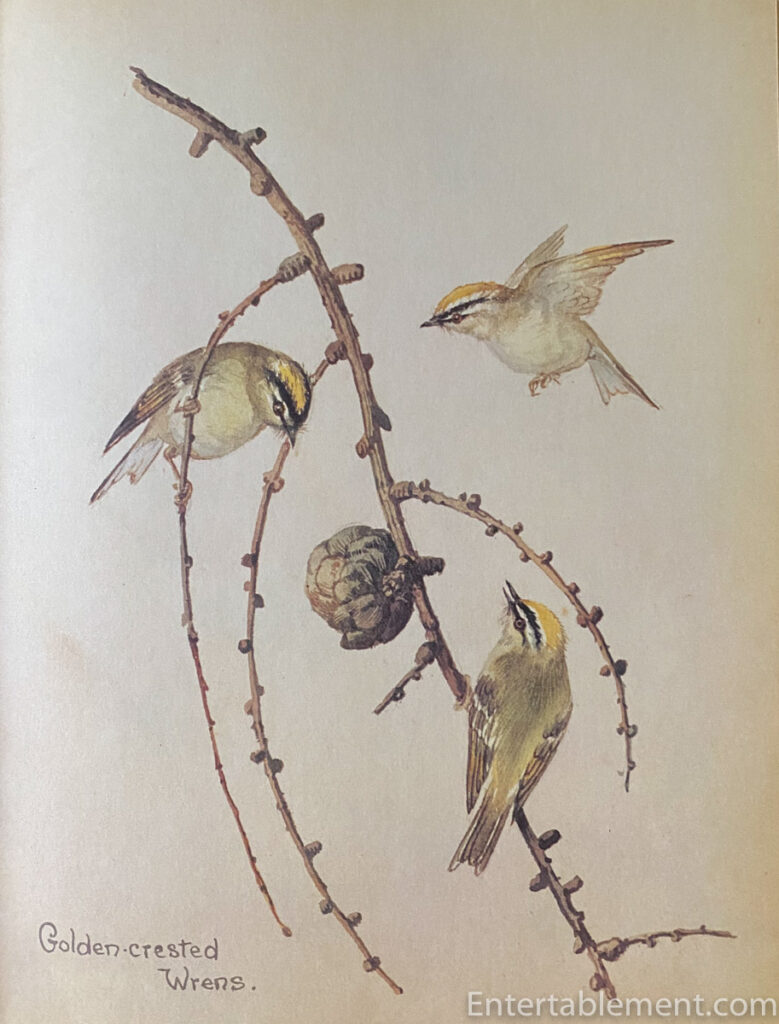 But the first of her Nature Notes to be published was for the following year, 1906, and is known as The Country Diary of an Edwardian Lady. It lay dormant until 1977, long after Edith’s death, but became an instant, worldwide bestseller. 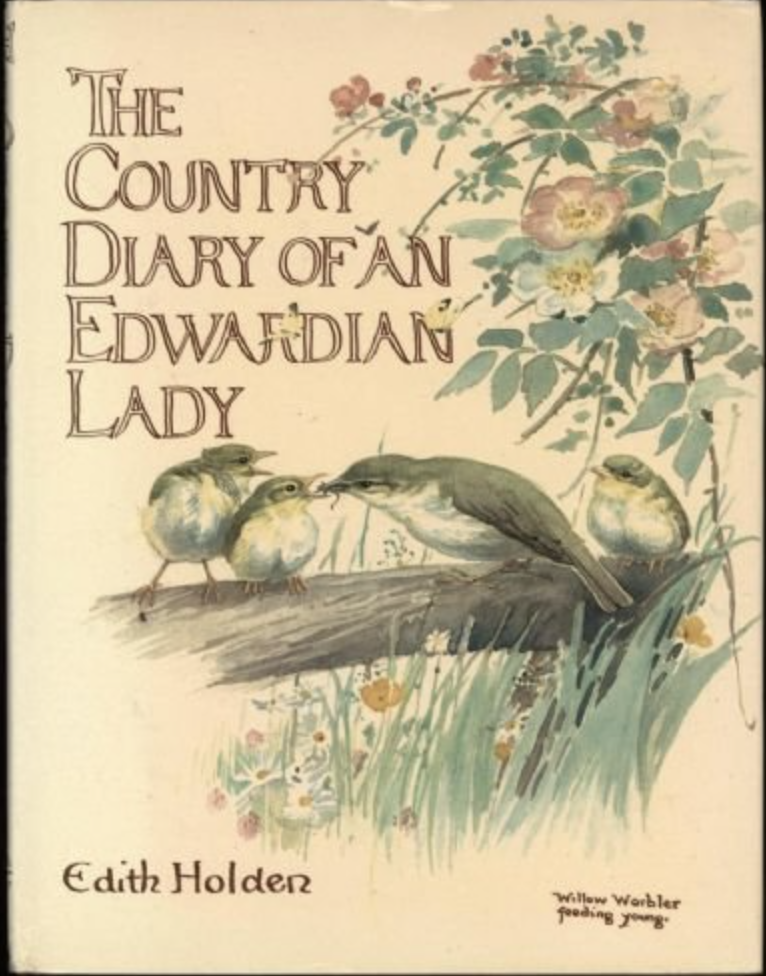 On the face of it, there is nothing unusual about what became her most famous work. Most Victorian and Edwardian ladies kept journals, and the majority of middle-class young ladies were taught to paint watercolours and sketch flowers. Perhaps it was the timing of the release of what had been a treasured family heirloom—the 1970s were a tumultuous period, economically, socially and politically. Whatever the reason, the journals captured the public’s imagination. 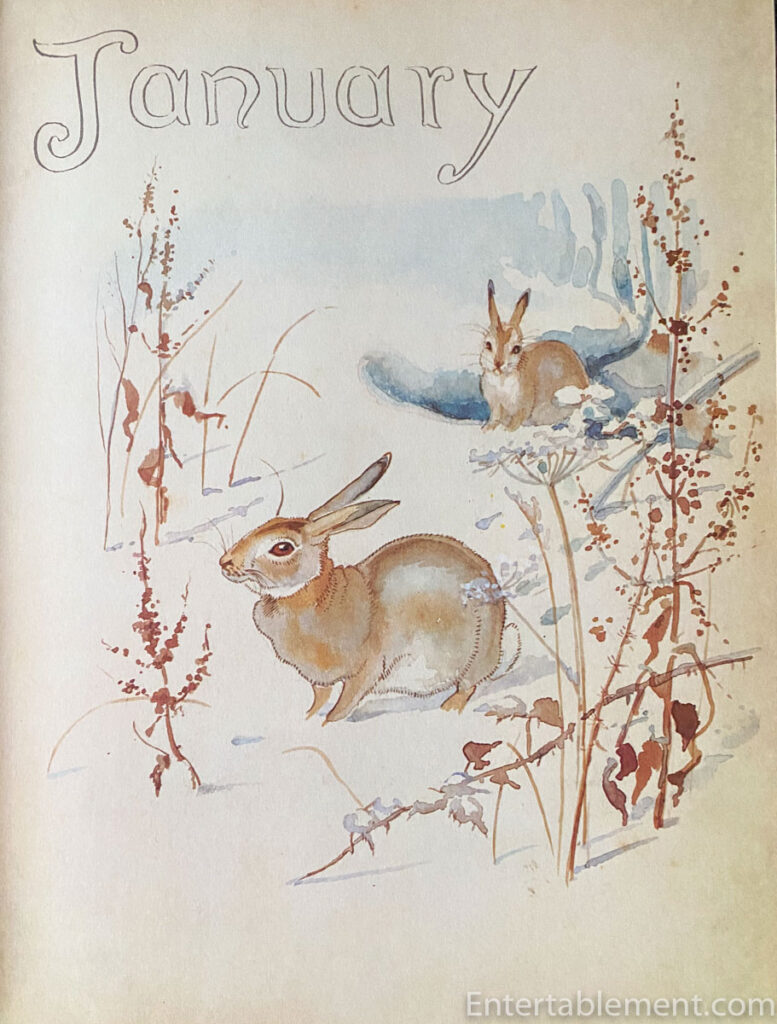 I stumbled across Nature Notes a few years ago when reading a blog from Home is Where the Boat Is. Intrigued, I tracked down a used copy of the book, read it with interest, and promptly forgot about it. But planning for Easter blogs this year, I remembered the gorgeous illustration of the rabbits at the beginning of April. 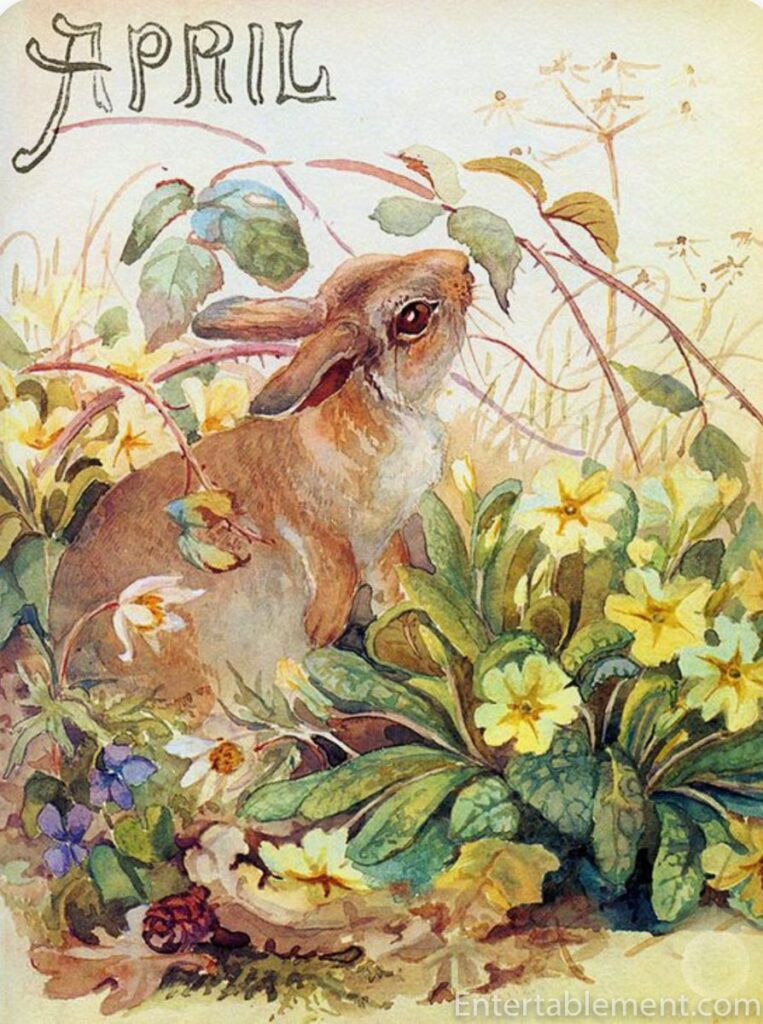 Well, that prompted a trip down another internet rabbit hole. And guess what I found? 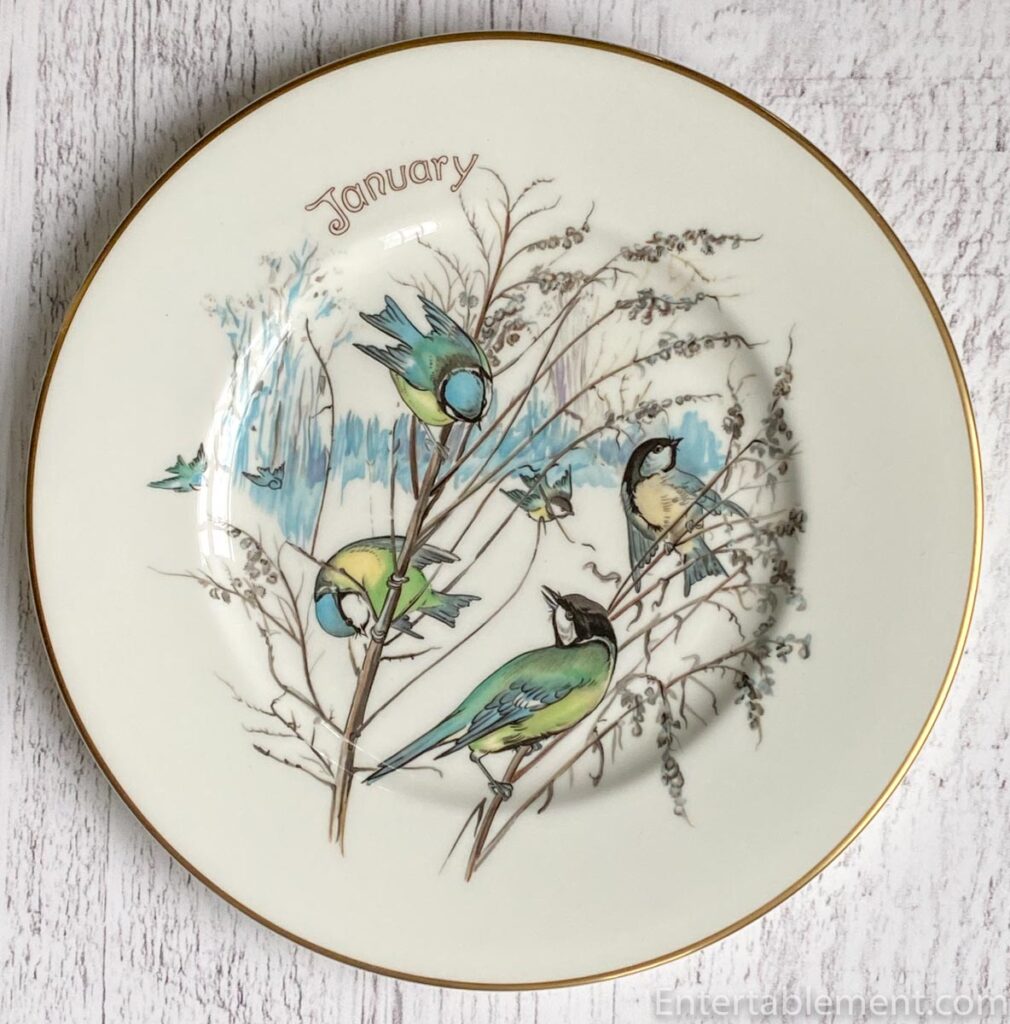 Yes, dear reader. plates. Not only plates but matching cups and saucers, too. 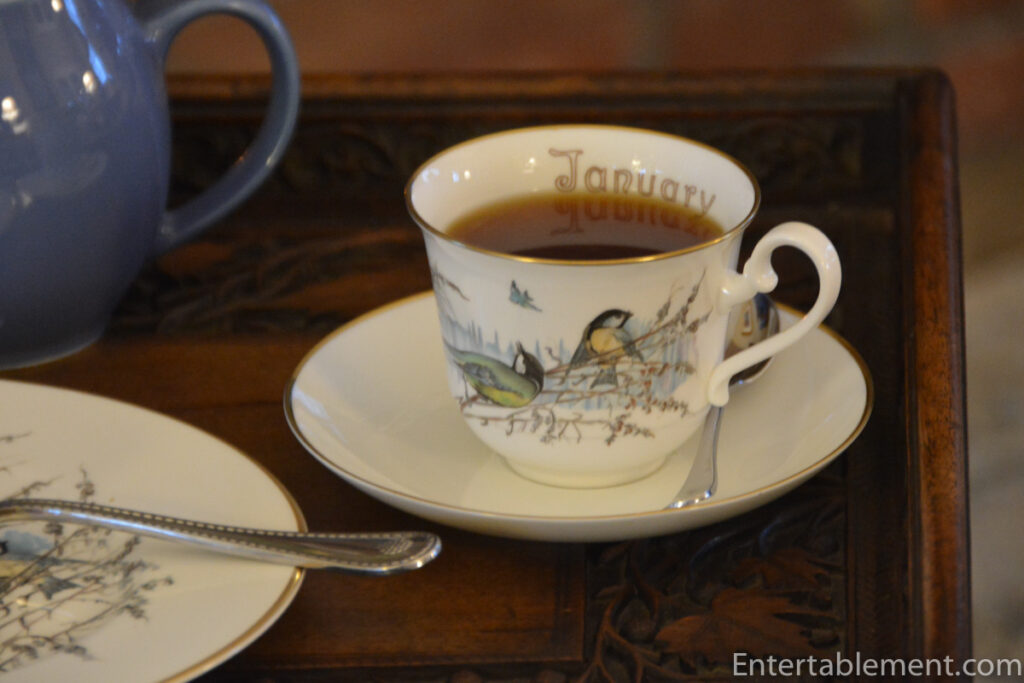 Made by Heinrich H&C (now part of Villeroy & Boch), the set comprises a plate, cup and saucer for each month of the year and features illustrations from The Country Diary of an Edwardian Lady. At least, the complete set does. The set I picked up on Etsy has two Februaries and no August, but let’s not quibble. Improvisation is the spice of life. 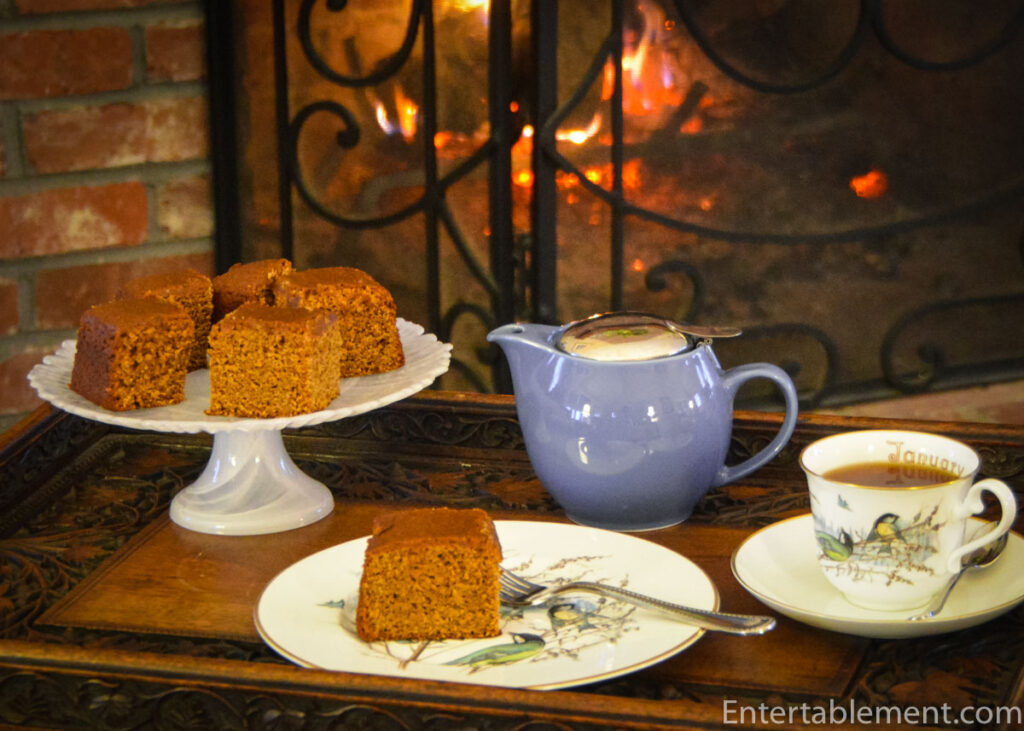 A germ of an idea took root. What if we were to join Edith on her travels through both years’ of Nature Notes and see what we could find each month? Her observations and illustrations took place in England, but there could surely be some similarities (and differences) between her journals and what we could find today in England and New England.

I devoured January for Nature Notes (1905) and The Country Diary (1906) and set off with curiosity and a camera. So let’s see, privet hips and haws, and what look like rose hips. 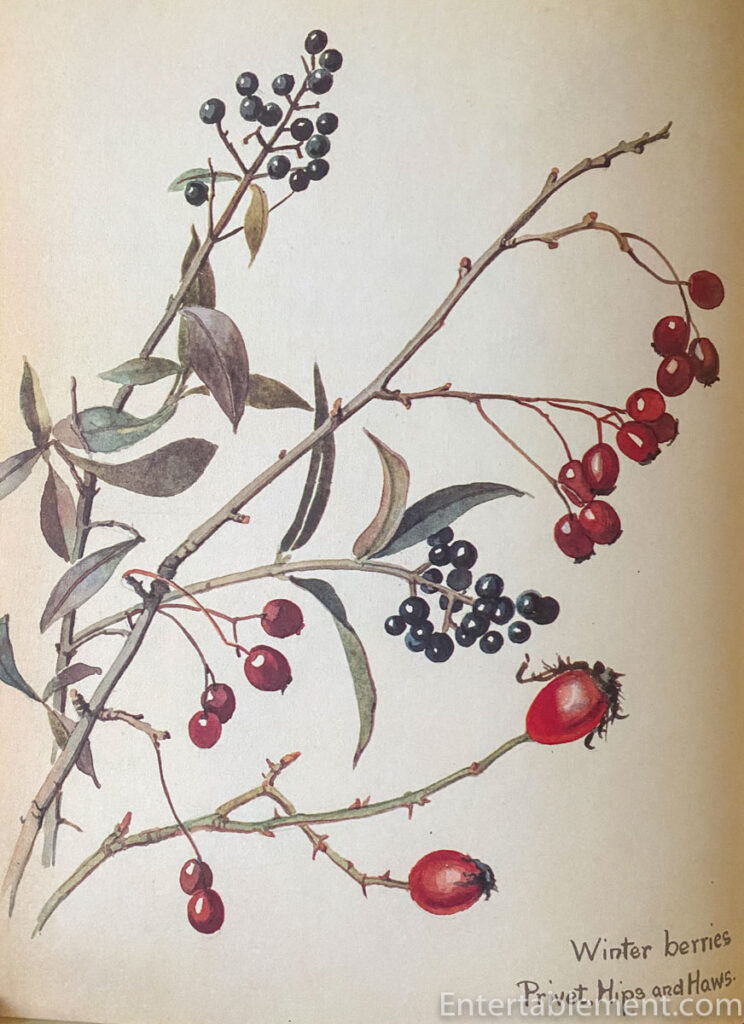 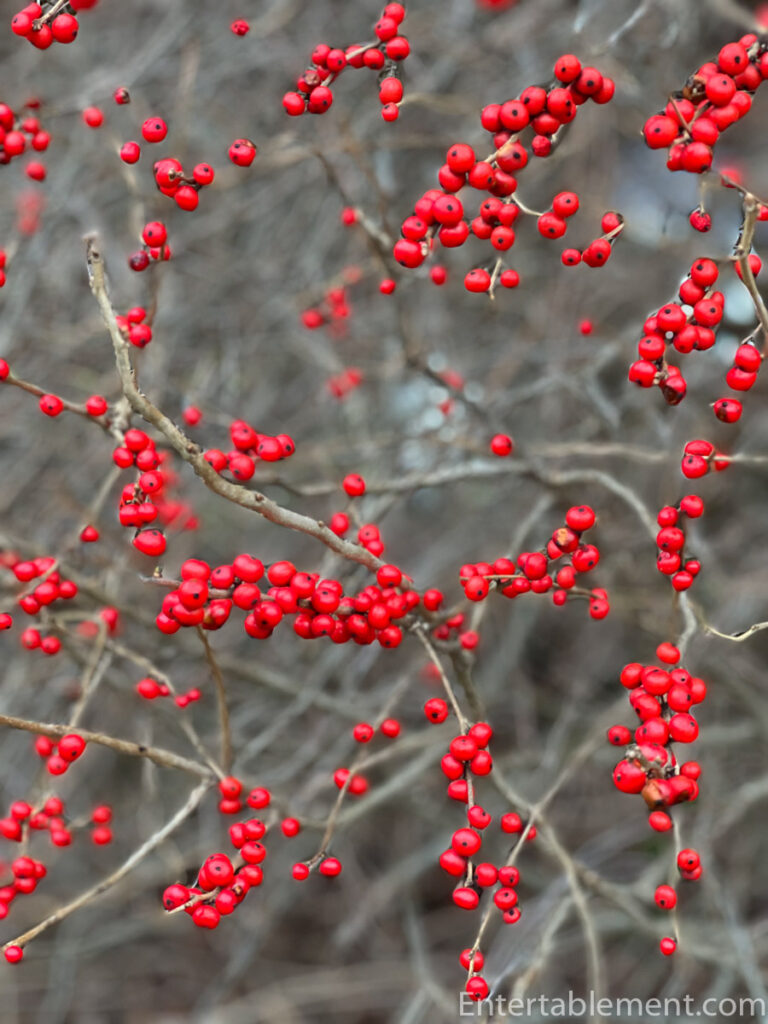 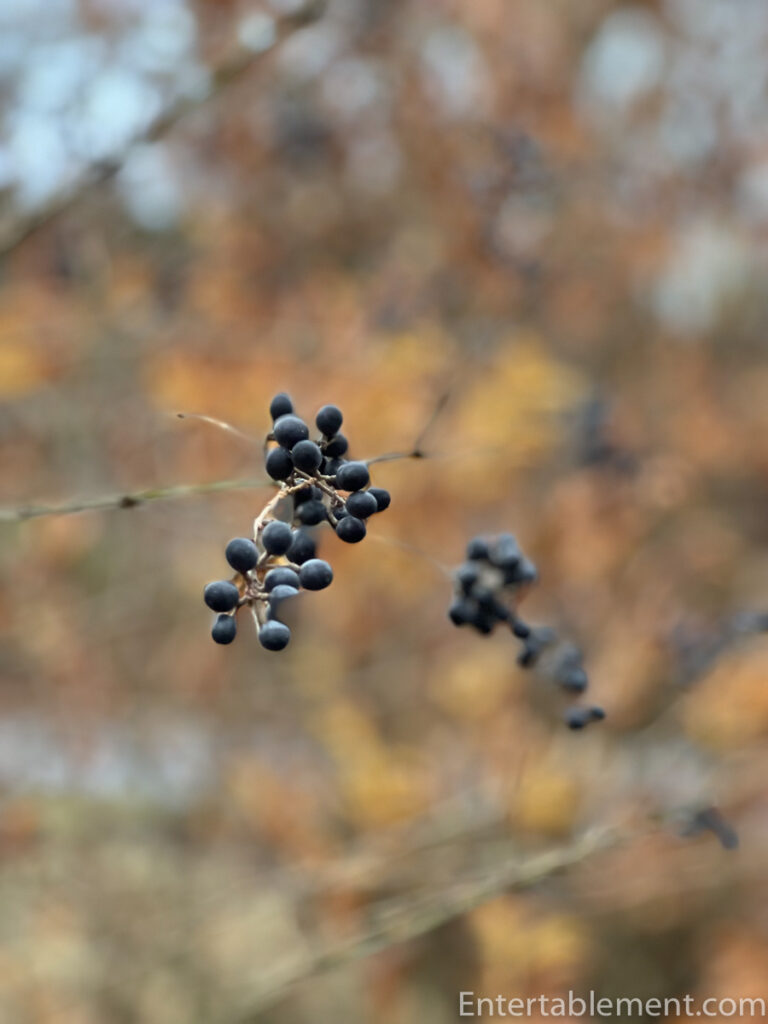 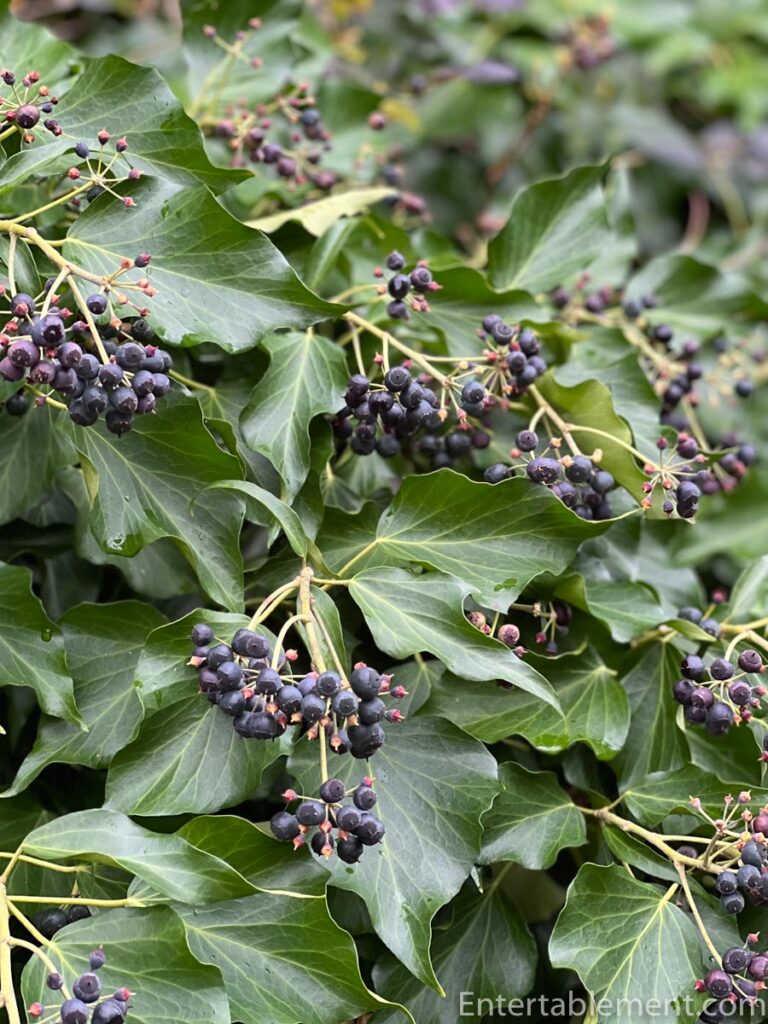 And some other hips and berries make excellent filler for floral decorations. 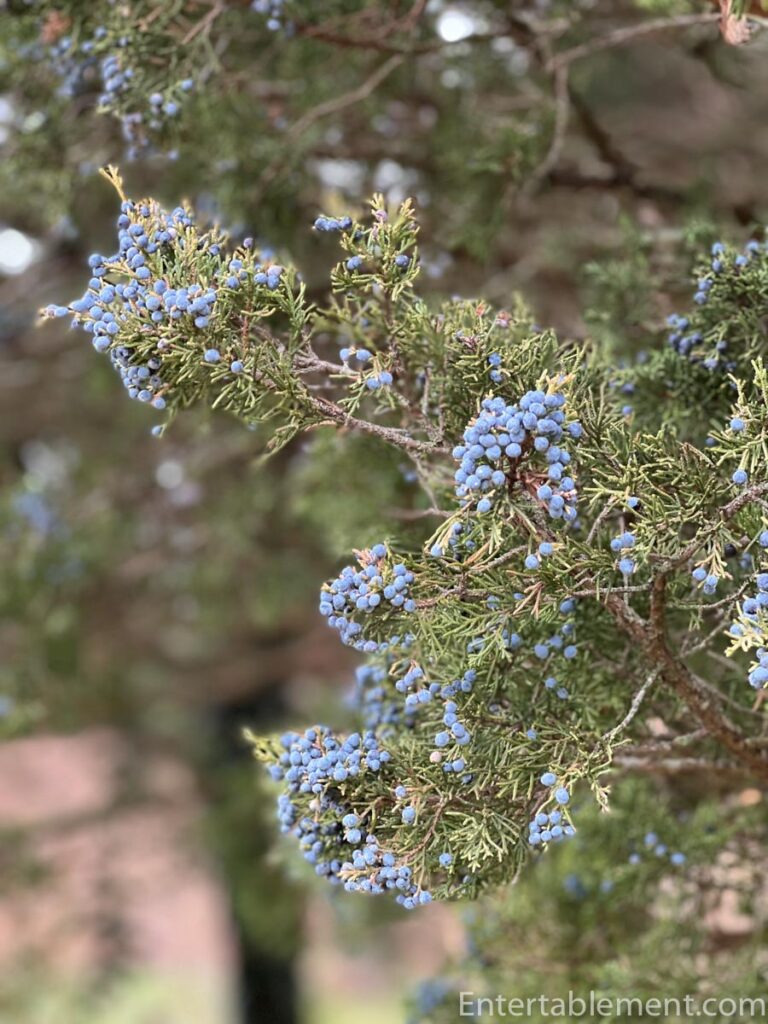 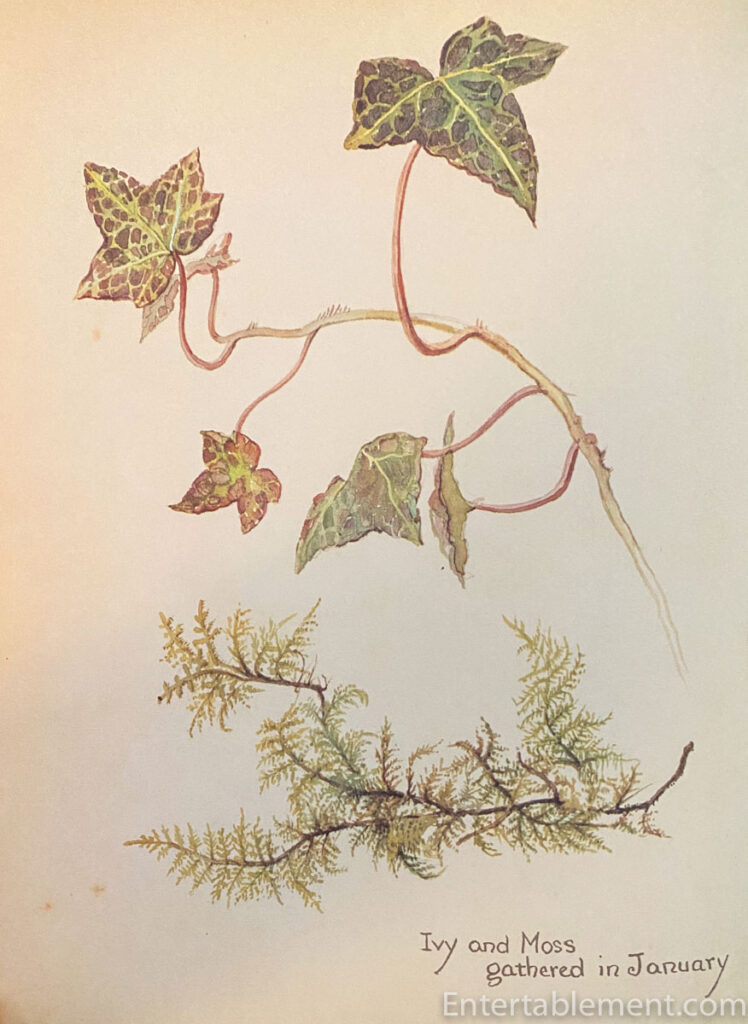 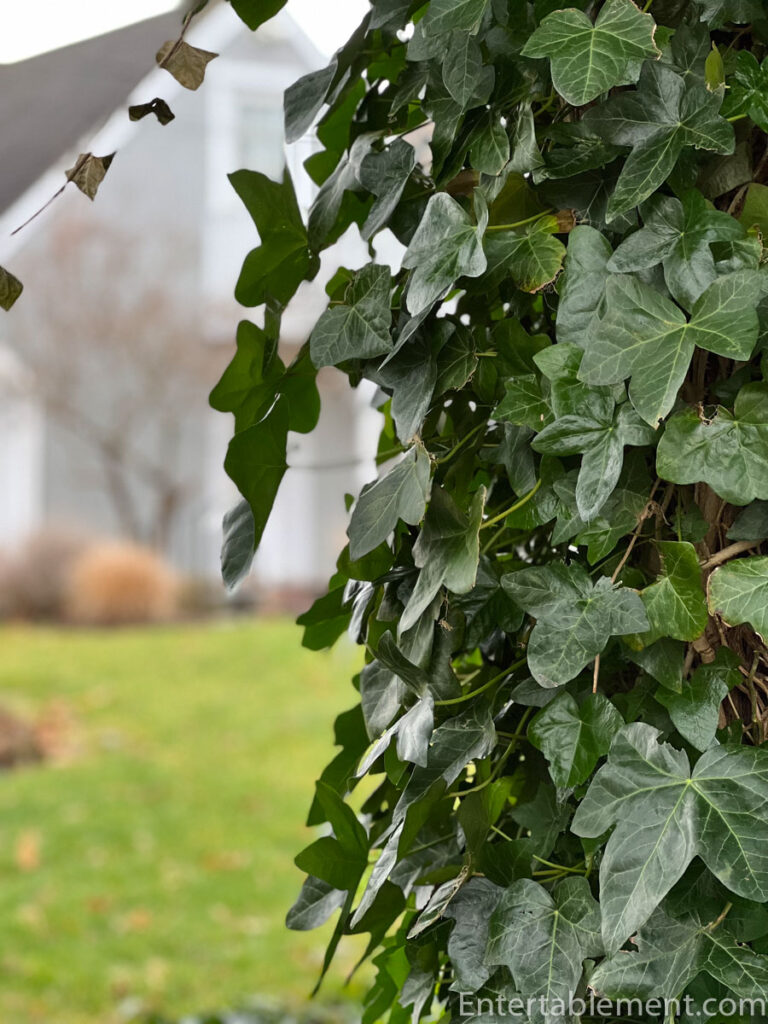 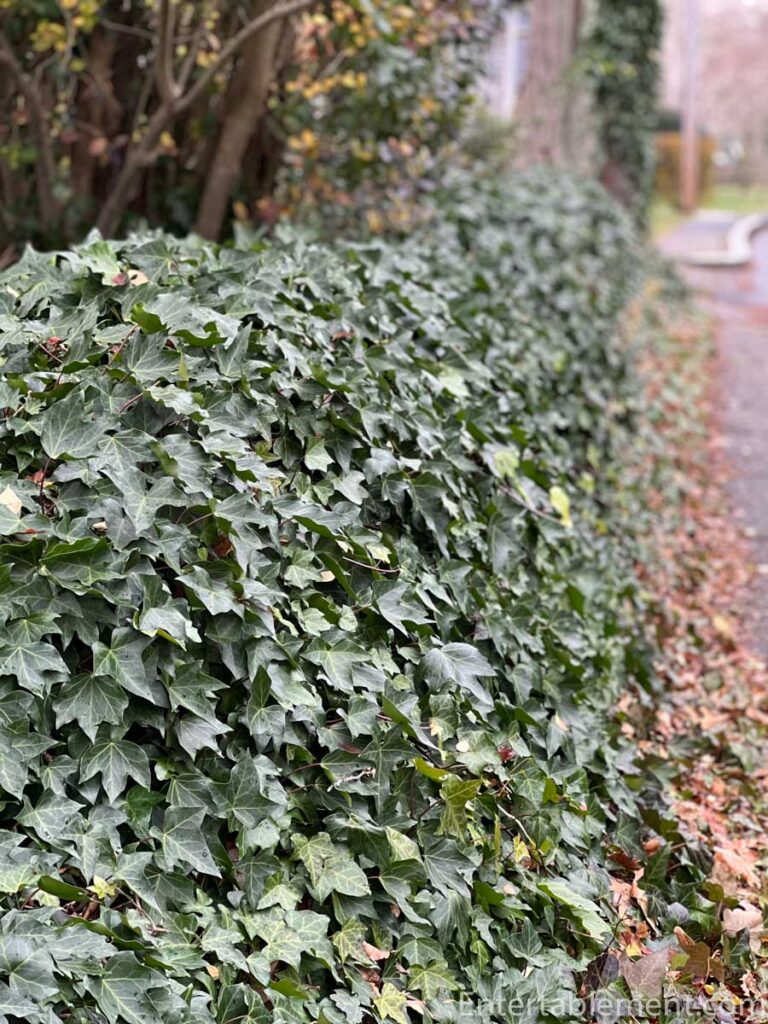 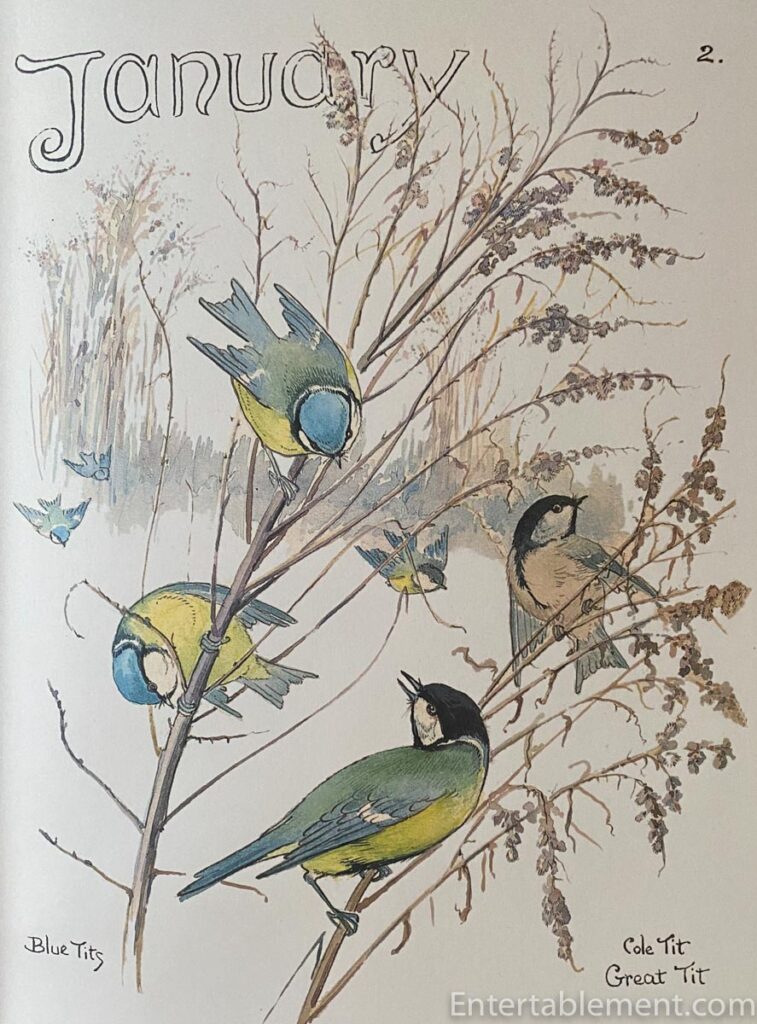 Tits are relatively petite birds with either muted plain or bright and vibrant plumage. On closer inspection, you may notice their short and stumpy legs, strong feet and small beaks.

In the UK, it is possible to observe eight different varieties, six of which are common in gardens across the country. They are highly territorial during the nesting period, and can be seen mixing in flocks. They have an amiable and social character and are persistent garden visitors.

Here in North America, we refer to them as titmice. Britanica.com tells us they’re a small cheery-voiced nonmigratory woodland bird. Along with the chickadees, titmice make up the family Paridae (order Passeriformes), with approximately 55 species throughout the world, mostly in the Northern Hemisphere.

Well, I didn’t find any. I did spot several robins and a couple of blue jays but wasn’t quick enough to capture them on camera. I did, however, find this tucked away in one of the shrub roses at the corner of the property. Awaiting this year’s occupants, after some refurbishment, perhaps? 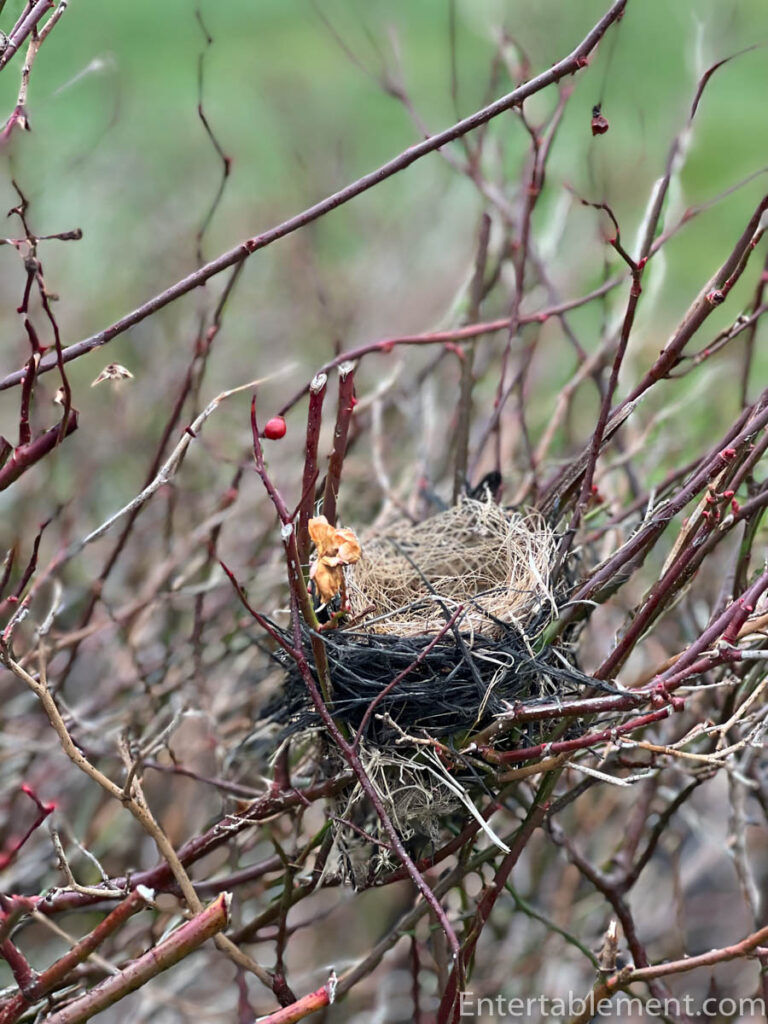 It was time to use that plate, cup, and saucer back home—Queen Mary Tea from Culinary Teas with a piece of Classic Sticky Gingerbread. 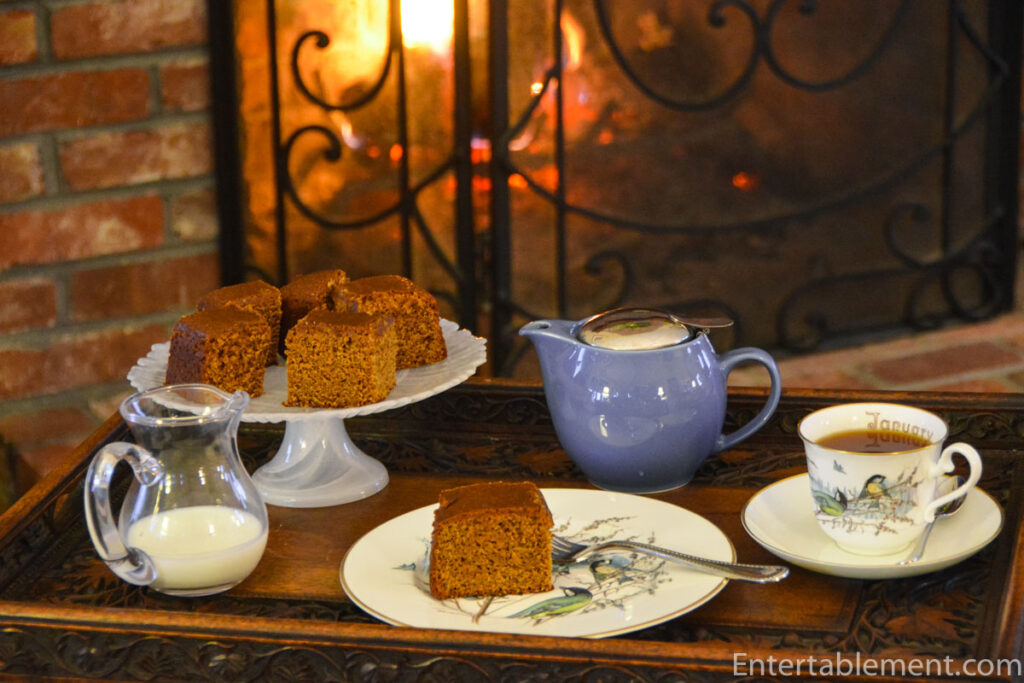 Queen Mary is a blend of black teas, though which of the black teas have turned out to be something of a mystery since I undertook some research for this blog. I understood it to be a blend of Assam and Ceylon and came across it at the Granville Market in Vancouver decades ago. However, James Norwood Pratt, tea expert extraordinaire and author of The Tea Lovers’ Treasury, maintains that the tea so beloved by Queen Mary was “a fine Darjeeling with a pronounced muscatel flavor.” Twinings sold it for more than 90 years before retiring it in 2007. Others maintain it was a blend of Darjeeling and Keemun. Culinary Teas, it turns out, is a bit coy as to what their blend contains, describing it as good flavor tempered with flowery character and malty notes. Coppery bright and excellent flavour. A traditional favorite.

Looking for an Assam and Ceylon blend, the original blend I knew as Queen Mary, I discovered Upton Tea had a Leadenhall Street Blend, named after the famous London Tea Markets. It’s delicious and very much what I remembered.

Let’s not let any of this get in the way of our afternoon nosh. Tea anyone? Or another piece of spicy gingerbread? 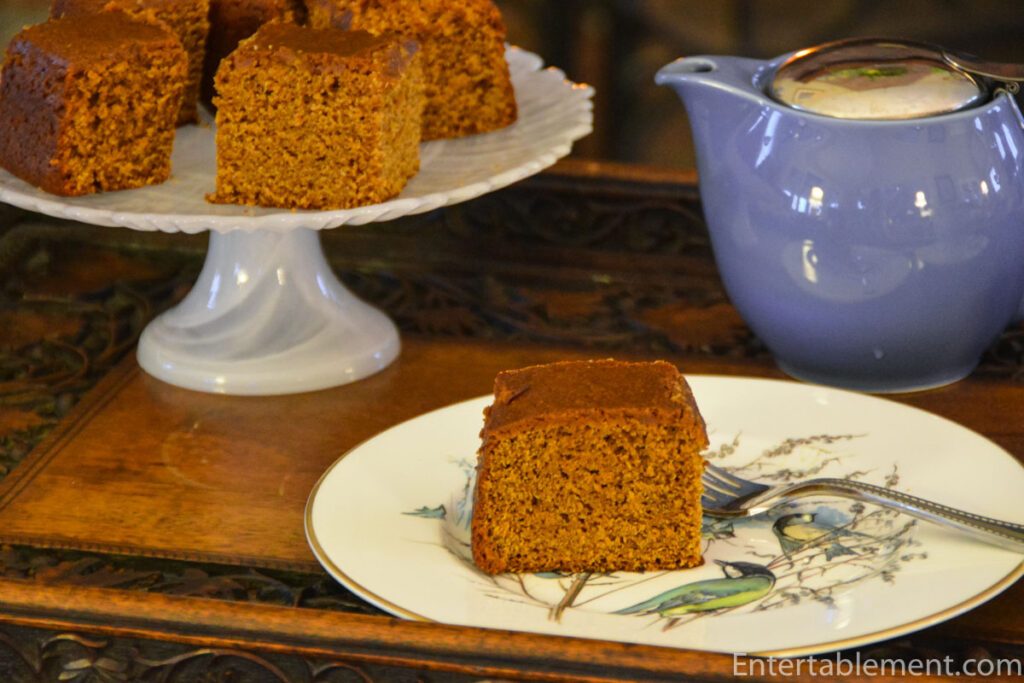 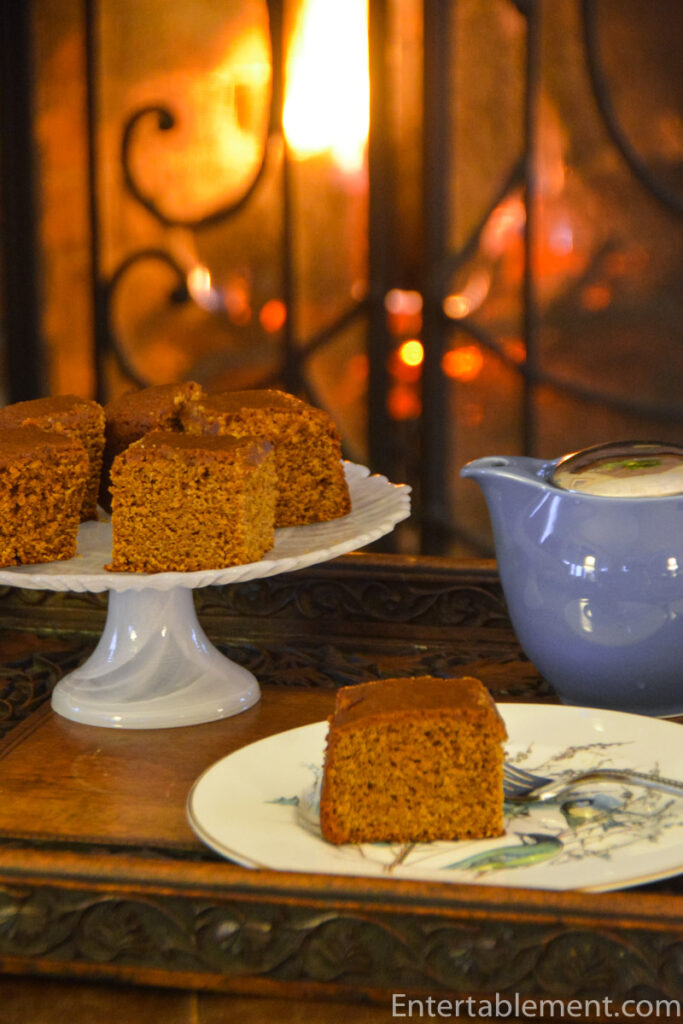 I had planned to share this blog with you over the weekend, but a good old-fashioned Nor’easter intervened. The storm started on Friday—the winds howled, and the snow whirled and drifted. But things began to taper off by late Saturday afternoon, The power had been wavering all day, setting off the fridge alarm and disconnecting the internet, but I thought we might squeak through. Regrettably not— the lights flickered and went out at 5 pm. So I lighted candles, piled logs on the fireplace and settled in to wait it out.

The security system started shrieking about 10 pm as the auxiliary battery ran down, but I managed to reset the system, and it subsided. At midnight, I was awoken by a booming voice: Carbon monoxide has been detected. Leave immediately. Carbon monoxide has been detected. Leave immediately. Over and over and over. The dogs were going nuts. I was groggy, fuzzy-visioned (contacts lenses out) and puzzled. Was this for real, or another issue with the dead battery on the alarm? Leave immediately? In the middle of a blizzard? With three dogs and two cats? Are you kidding me?

The cats were in the sunroom, so I hustled the dogs in there and opened the sliding door, leaving the screen in place to keep them both contained and exposed to fresh air. Glenn was away, so I called and woke him up. Together we went down the checklist: We had no power, so the furnace was off. Could there be enough gas from the pilot light to cause this? Check the furnace vent outside to make sure it was clear. Done. Had I left a stove burner on? No. What could possibly be creating carbon monoxide? The fireplace? Possible but unlikely. Any symptoms? No. Ok – let’s think this through, then. But how to shut that damned voice off so we could think. I tried disconnecting the alarm from the wall, but that didn’t do anything helpful. Glenn remembered the box in the basement had a connection to the auxiliary battery, so I disconnected that, and merciful silence followed. I considered calling the fire department but reasoned they likely had enough on their plates with the storm. In the end, I got hold of the alarm company, and they confirmed that the low battery was causing the alarm, not actual carbon monoxide.

Mid-afternoon on Sunday, the power company, Eversource. sent a text saying I could expect power to be restored by 6 pm on Monday. Unfortunately, the house was now in the low 50s near the fireplace and the low 40s in the remaining rooms. I shuddered, started all the taps dripping to prevent pipes from freezing, added more wood to the fire and resigned myself to another double-layers-of-clothing-huddled-under-multiple-covers night. The cats were disgusted with me but snuggled in as close as they could get.

To my utter delight, the lights came on around 5 pm. Alleluia! I have never been so happy to see evidence of electricity. Appliances hummed, the fridge chirped, and the booming voice resumed: Carbon monoxide has been detected. Leave immediately. Carbon monoxide has been detected. Leave immediately. Killjoy. Glenn had warned me about this. I went down to the basement and unplugged the system from its outlet above the breaker panel. Silence. I came upstairs to find the Fire Department at the door. They came in and checked the house as I explained what I’d done and why. They were incredibly kind and confirmed we had zero carbon monoxide anywhere.

Nothing could dim my delight in returning to civilization and a warm house. It took about six hours for the place to come back to temperature. I snuggled down in my own warm bed, cats upholstered to me and dogs snoozing nearby.

And it turns out that the Edwardian Lady and one C. Kingsley knew all about Nor-easters in January. Some things do not change. 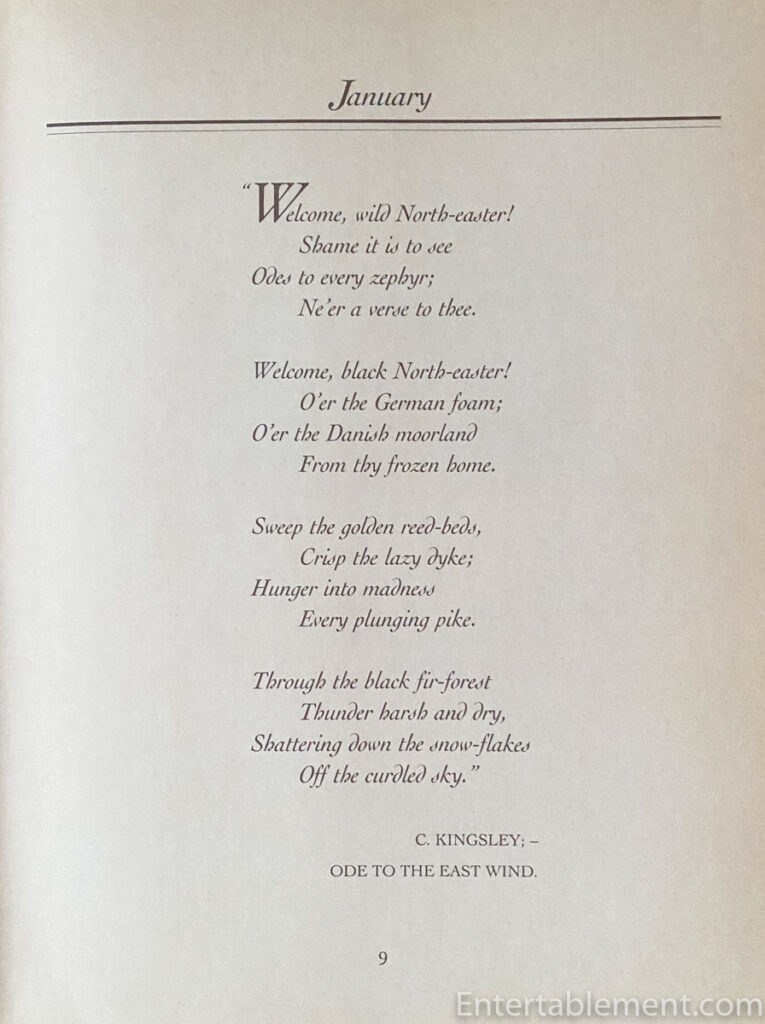 That’s a wrap for January!