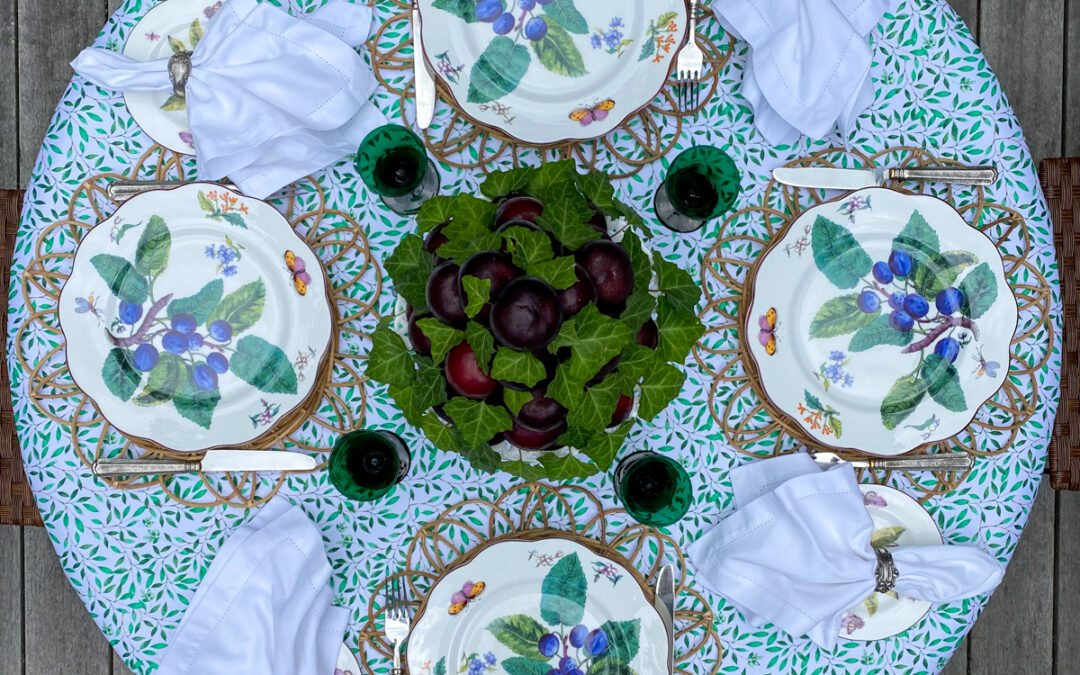 It’s always a happy day when I discover a previously unknown china pattern. When it involves a modern (and therefore, attainable) replica of a much-loved antique design, it’s even better. Such was the case last autumn when Glenn, Lauren, and I visited England. There, in the window of the Royal Collection Shop near Buckingham Palace, was a display of Chelsea Porcelain. Having learned my lesson about lugging tableware back from England, I went in, oohed and aahed, snapped photos and backed away from temptation (get behind me, Satan, as my mother used to say). 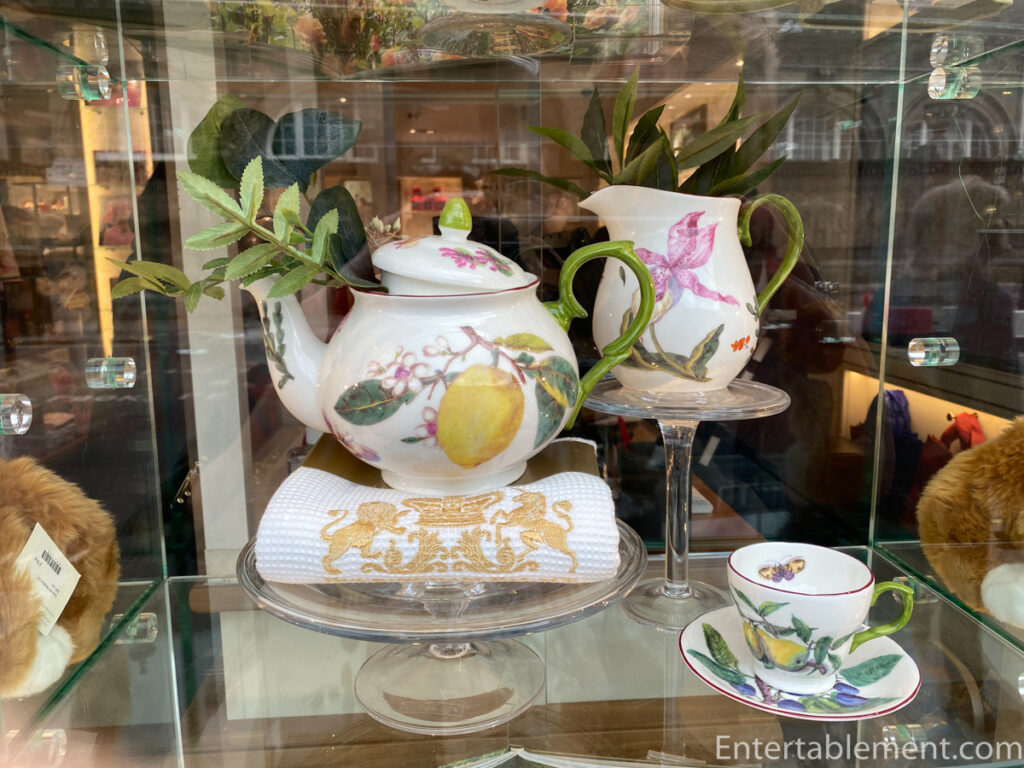 Before we left, I went online to take a closer look at the Chelsea Porcelain from the Royal Collection. Described on the website as a design closely derived from the large collection of botanical porcelain acquired over a long period, beginning in 1947, by Queen Elizabeth The Queen Mother, the set comprises several sizes and patterns of plates, a tea service and a few serving pieces. 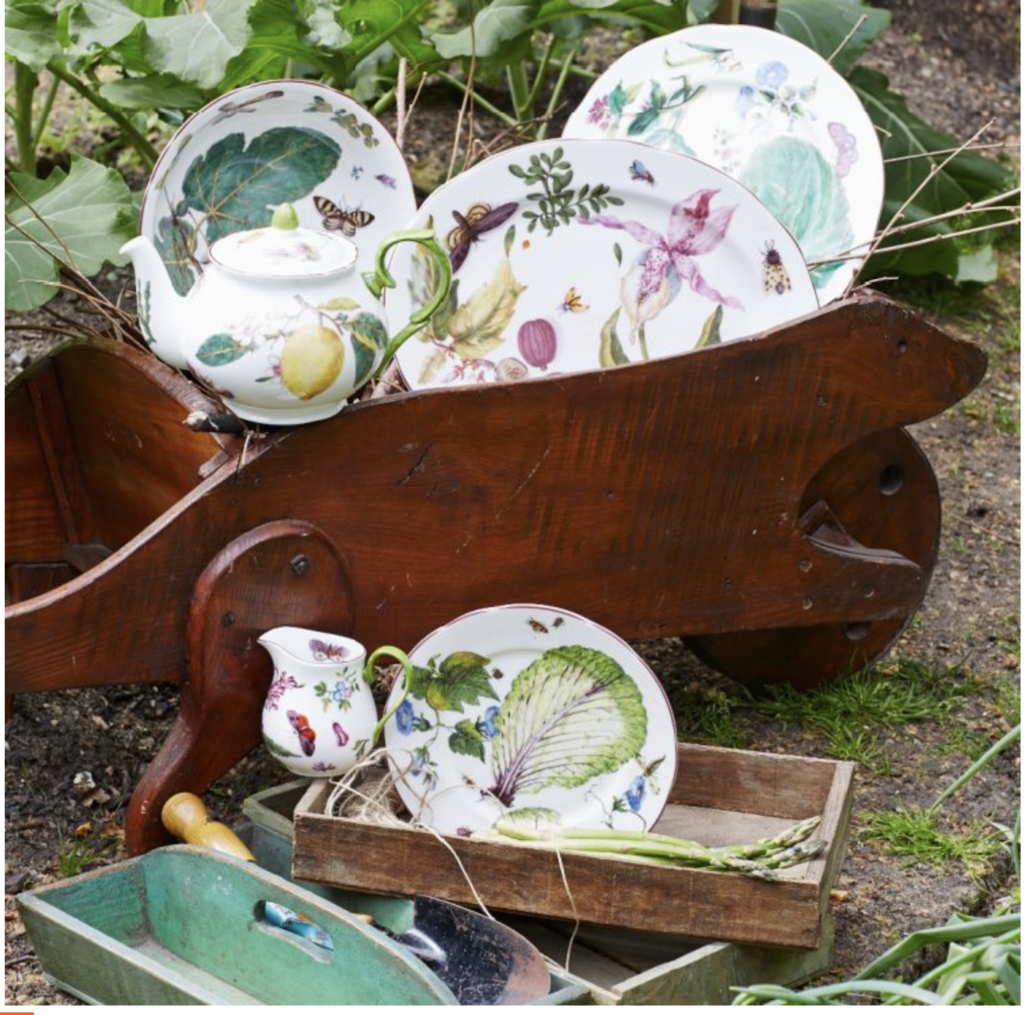 Unfortunately, most of the pieces were out of stock, but they invited me to leave an email address to be informed when their inventory was replenished. Done. 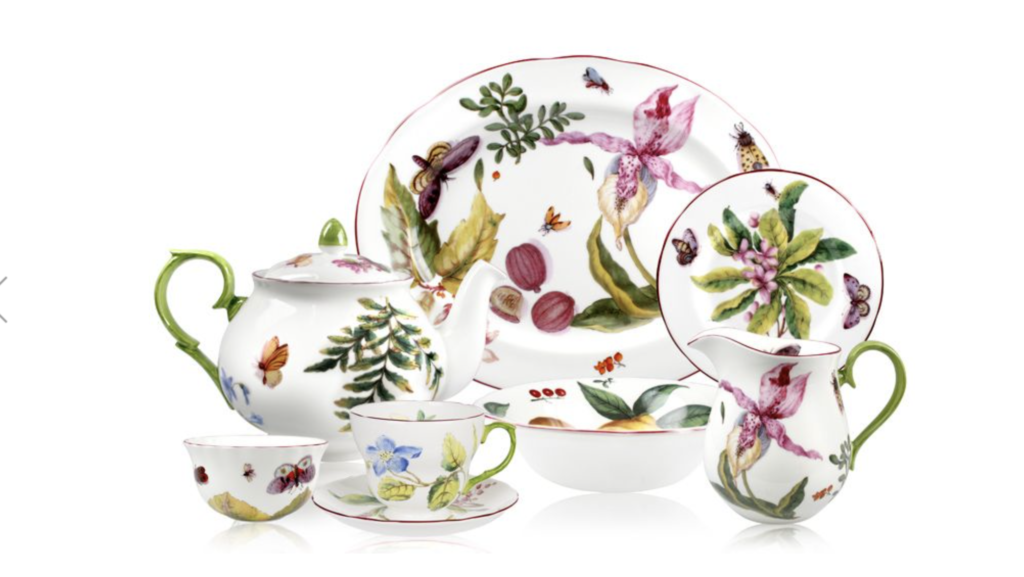 Meanwhile, I began researching Chelsea Porcelain, which I’ve always been very fond of but woefully uninformed. Alnwick Castle has a fantastic collection, each piece featuring a different plant or flower. Unfortunately, no photos were allowed when I visited years ago, but I hope that situation has changed as we are planning to return with some of the kids and grandkids this summer. 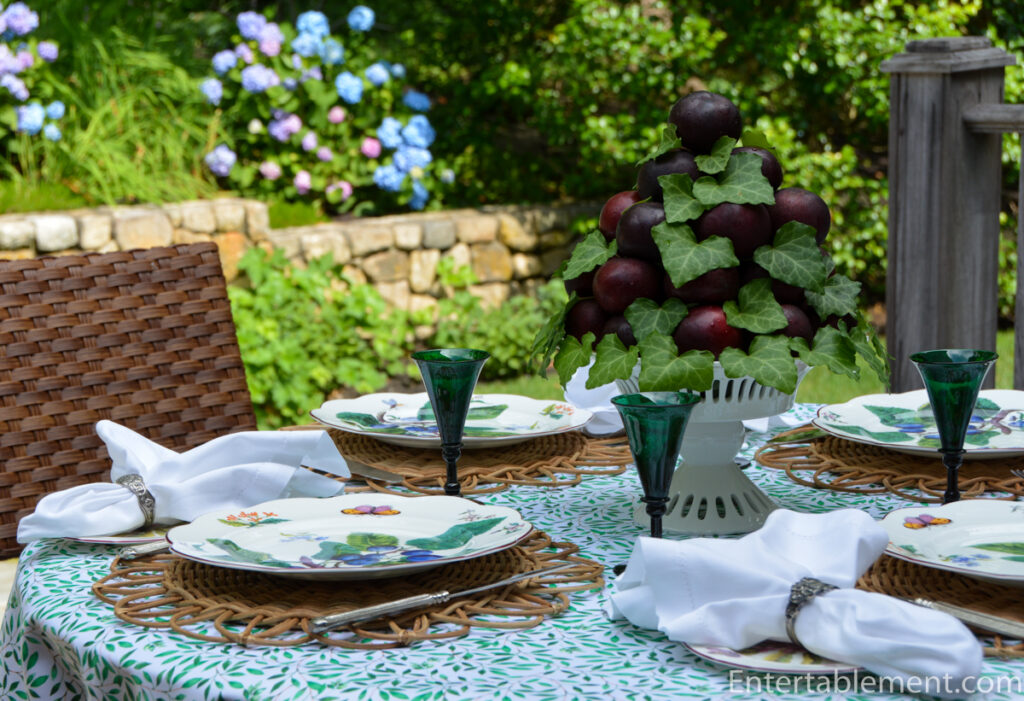 Several months later, I got an update, letting me know that several of the plates were back in stock, including the scalloped edge “plum plate”, as I think of it. 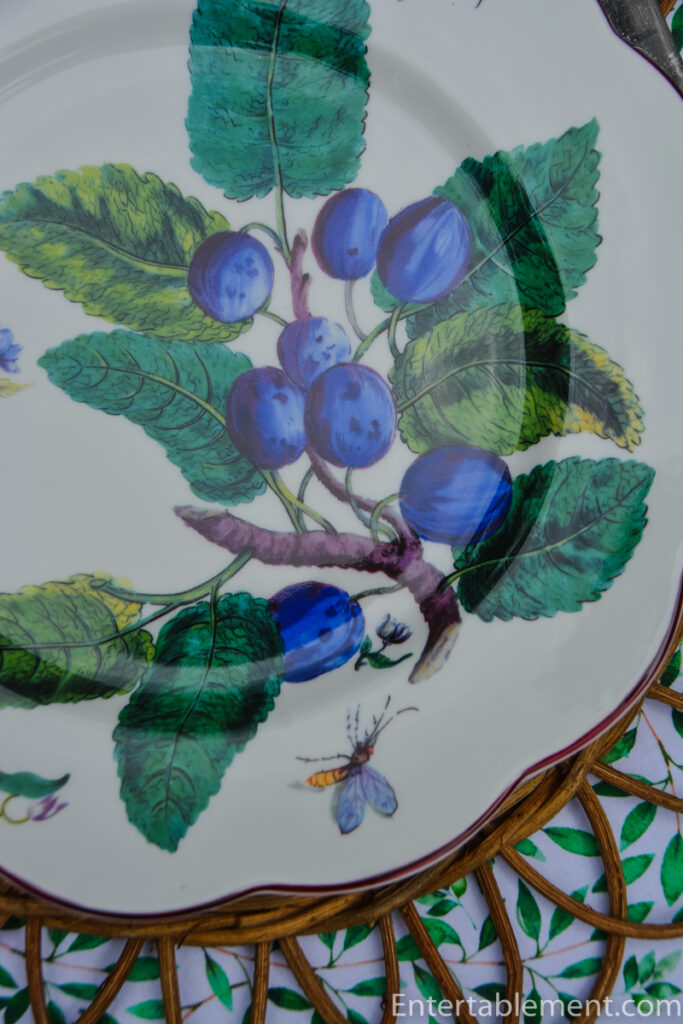 Note the blue-green of some of the leaves, which contrast enticingly with the deep purple plums. I set to work creating a plum topiary as a centrepiece. 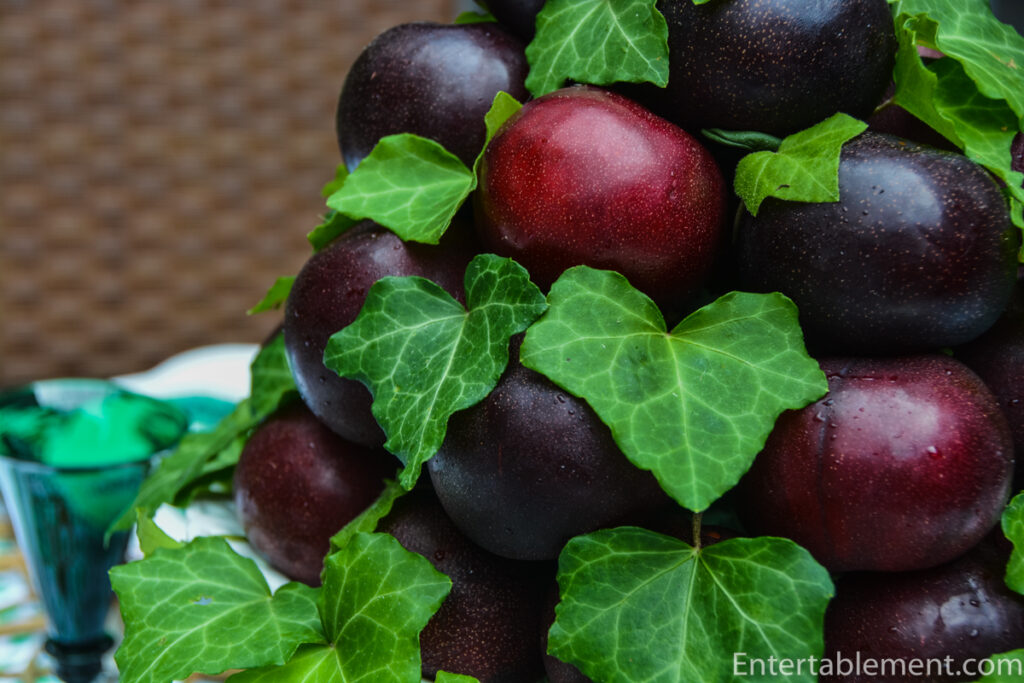 The base is a pierced footed compote from The Enchanted Home. As I planned to dismantle and use the plums once for a Ginger Spiced Plum Streusel Pie once I’d set the table, I simply stacked the plums in a pyramid shape using floral putty for the more recalcitrant participants. Ivy from the garden filled in the gaps. 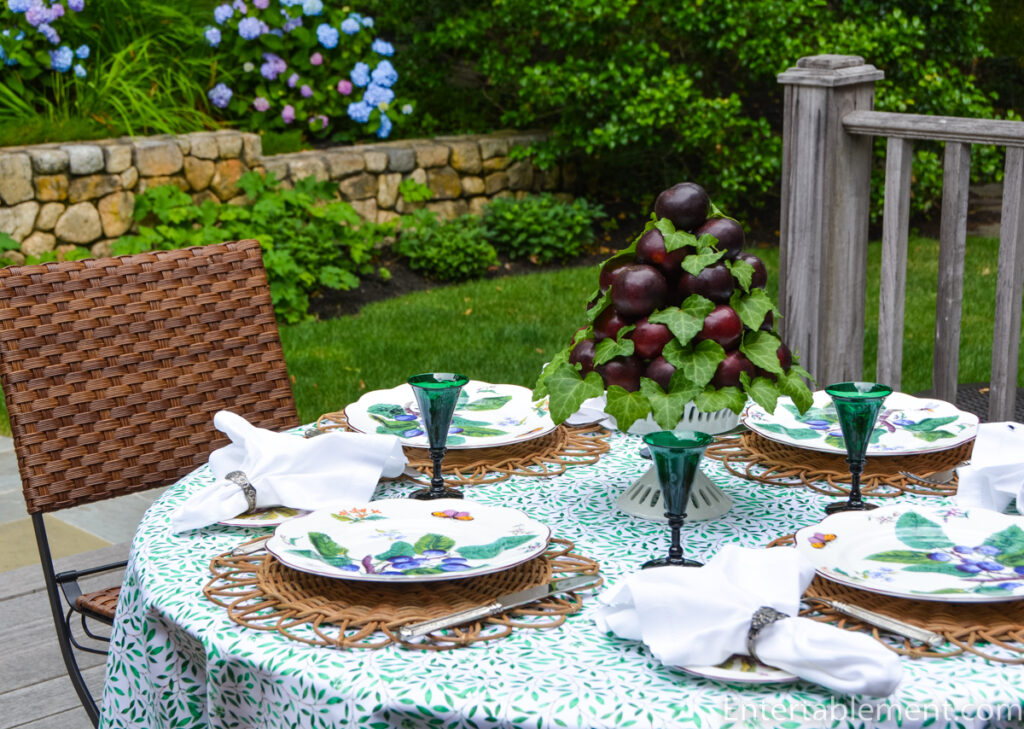 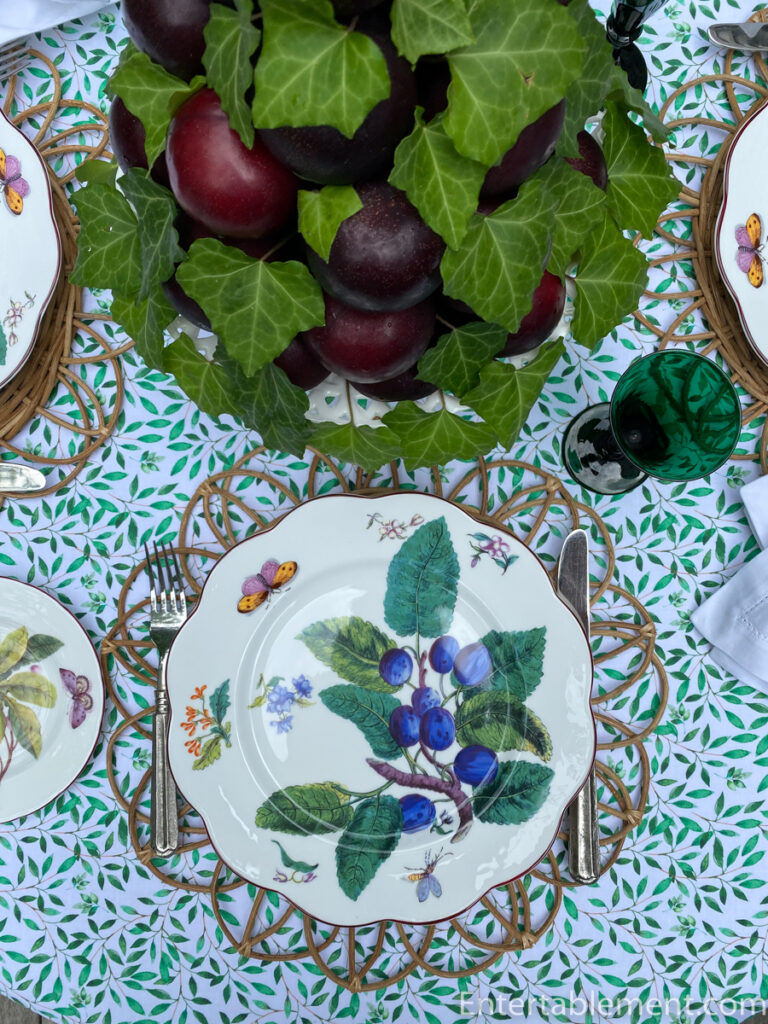 I had planned on using an ivy-patterned tablecloth, but it was just too much pattern. Dizzying, in fact. The smaller scale of the leaves on this tablecloth provided a better backdrop. 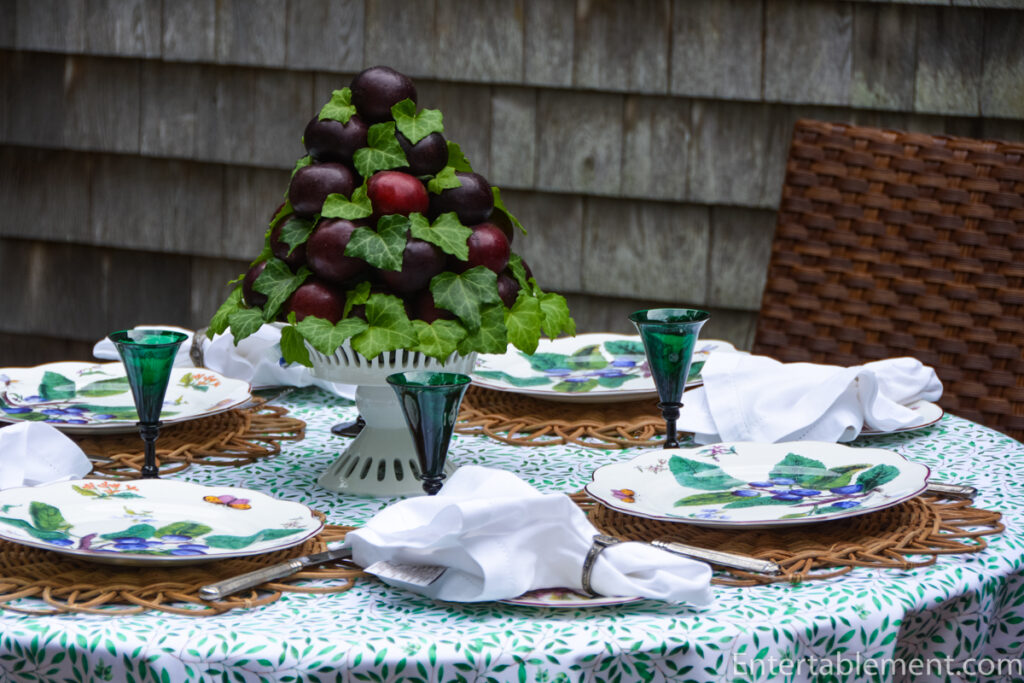 The scalloped-edge plate was bigger than I anticipated; the set offers a dinner plate and a salad plate, so I assumed this plate would be luncheon-sized. Uh, no. It’s a full 10″ in diameter. The as-described dinner plate is 10½”, so I suppose we could argue that the scalloped plate is a luncheon plate, but it’s still quite hefty. 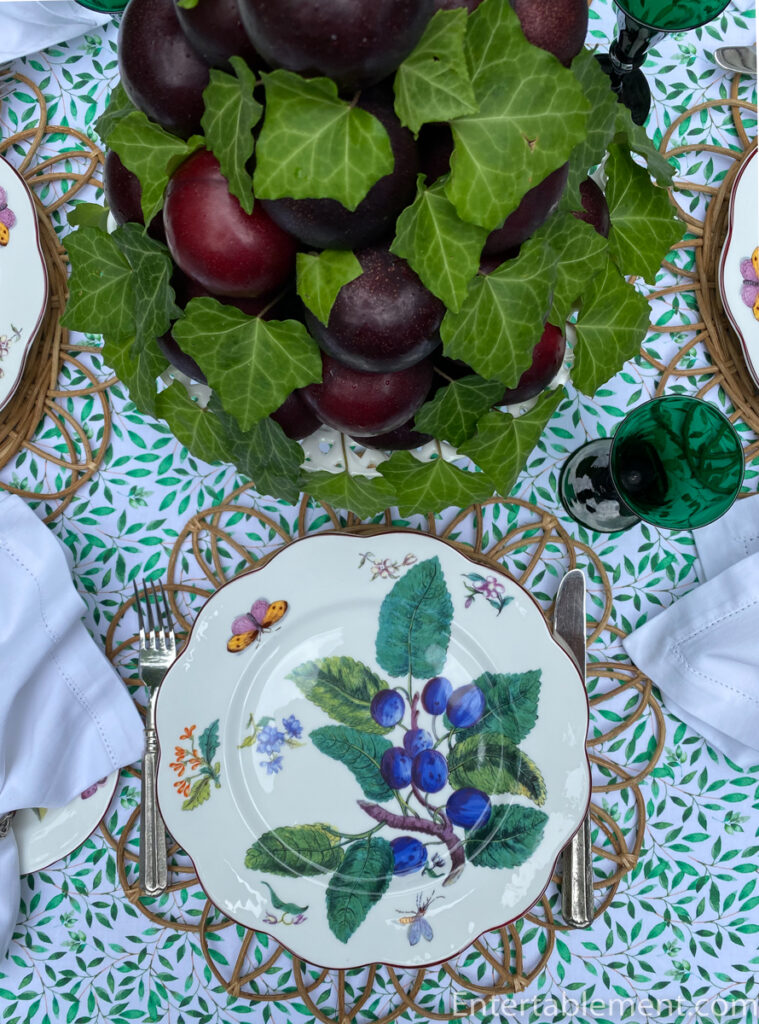 As pronounced on the website, it’s made entirely by hand by our skilled artisans in Stoke-on-Trent using traditional methods unchanged for over 250 years, using English fine bone china, highly regarded around the world for its whiteness, fineness and delicacy.

Best of all? Suitable for use in a dishwasher.

Typical of Chelsea Porcelain, there are many intricately detailed depictions of flora and fauna. 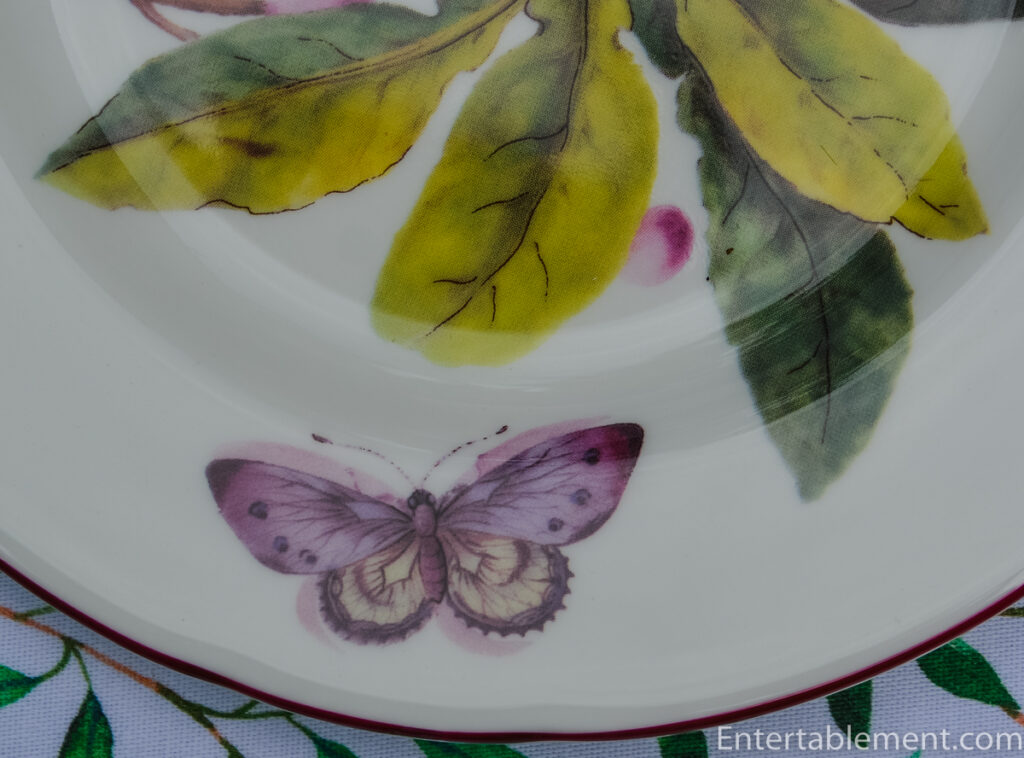 All the pieces are edged in a most delightful orchidy-purple—very unusual and fun to play with. 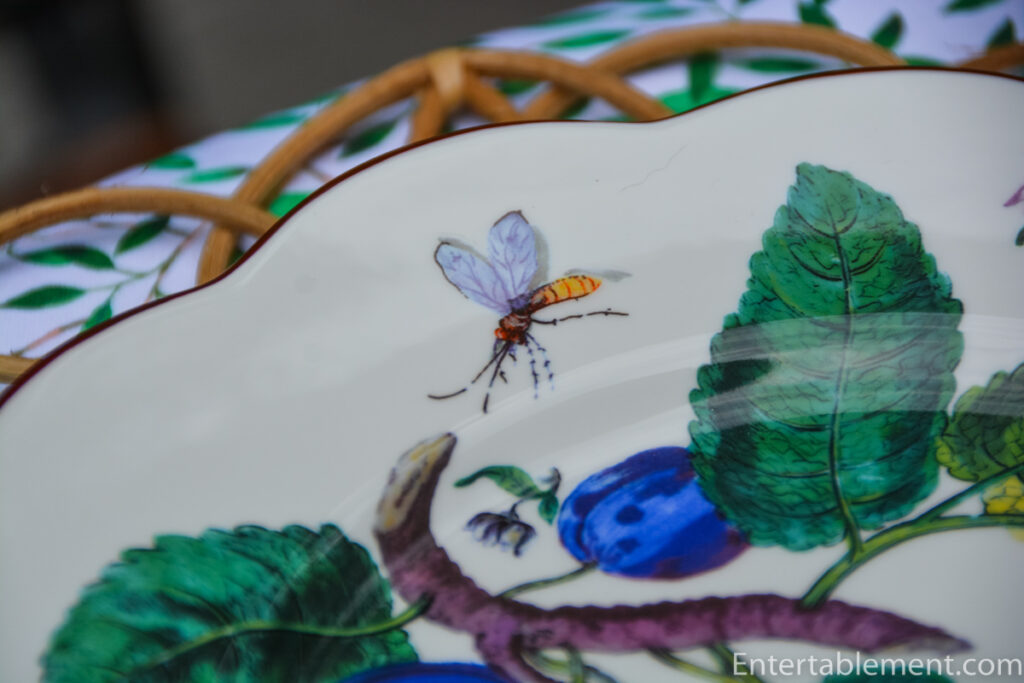 Here, I’ve placed the bread and butter plate on top of the plum plate. You’ll notice the green on that plate has a yellow undertone. 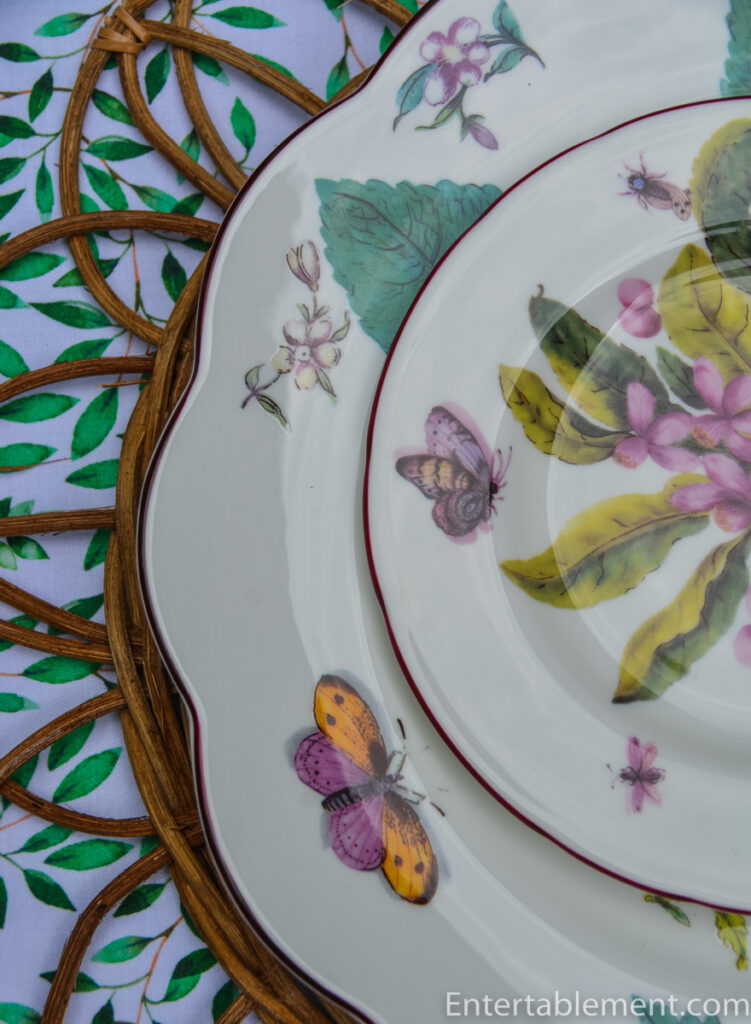 The backstory on the Chelsea Porcelain Works is fascinating, particularly given its very short tenure, from c. 1745 to 1769.

In 1709, Germany was the first European country to “crack the porcelain code”, so to speak, prompting chemists and entrepreneurs across Europe to produce their own versions. Silversmith Nicholas Sprimont was among them, establishing his own works on Lawrence Street in Chelsea.

From the start, the production was outstanding and made for the wealthiest clients. Employing craftsmen mostly from France or Belgium, the factory produced porcelain figures, tea services, clock cases, and tableware, including figural fruit and vegetable serving pieces, made using designs adapted from making silver pieces. Meissen and Sèvres porcelain were other sources of inspiration, so much so that it’s impossible to tell some of them apart from Chelsea Porcelain.

After nearly twenty-five years of creating some of the most sought-after soft-paste porcelain designs, Sprimont’s energy and health declined. In 1769 he sold the Chelsea enterprise to William Duesbury, who merged its production with his Derby porcelain factory. The Chelsea factory continued for another 15 years, closing in 1784 when its materials and craftsmen transferred to Derby. 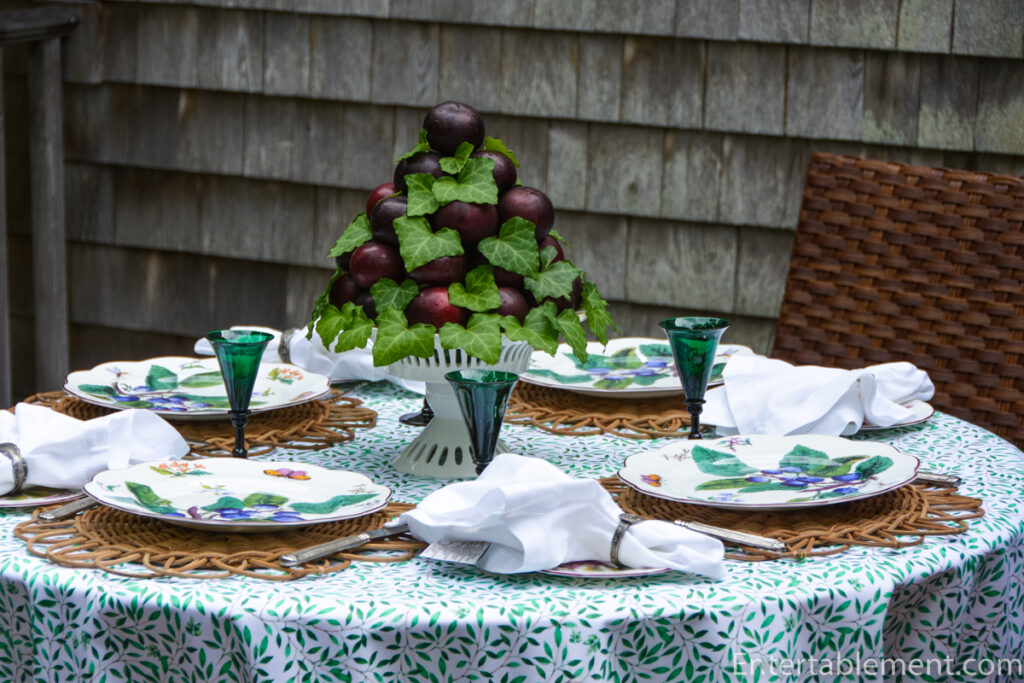 I’m delighted with my modern reproduction plates and eagerly await additional pieces as they come available.