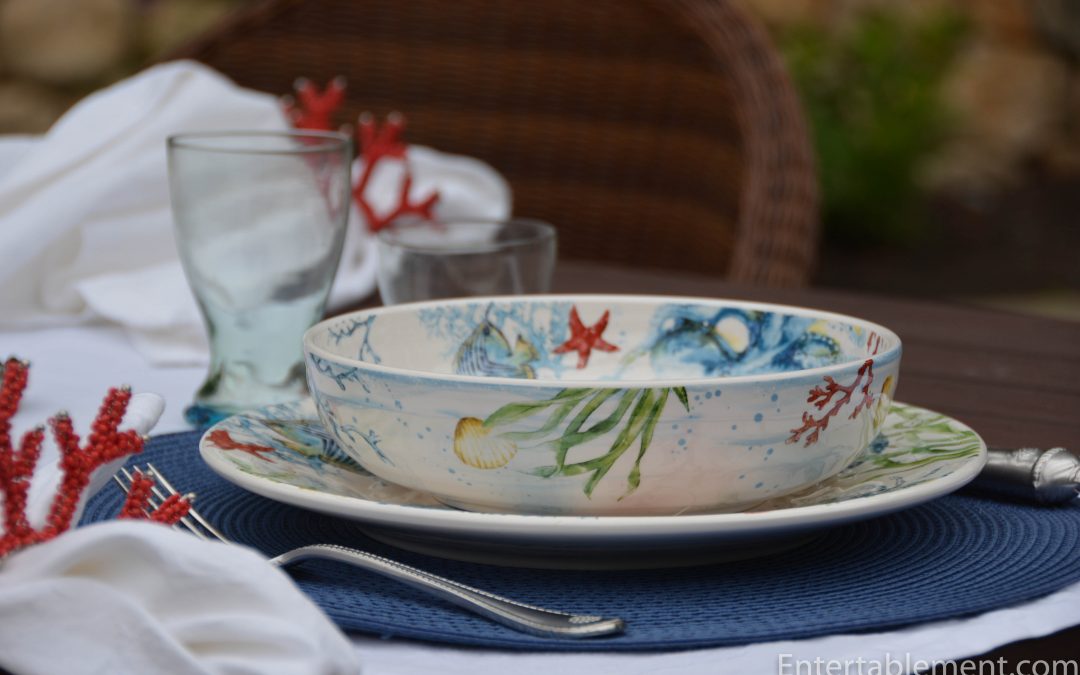 Summer by the seaside.  Sand and surf and seafood.  Yum.

Ironically, this pattern by Pier 1 made its appearance in stores in January of this year. While I’m all for thinking ahead, this did seem to be rushing the season, just a bit. I made a mental note to look at it again in a couple of months, as a possible addition to the Cape House. To my astonishment, nary a piece was left in April and the remnants were on the clearance rack. “No, we aren’t expecting any further shipments, ma’am. It’s been discontinued.”  Seriously? 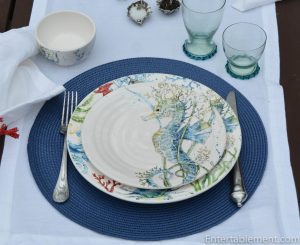 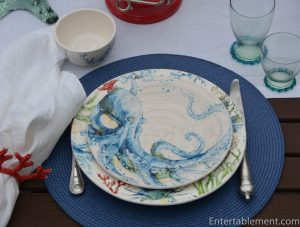 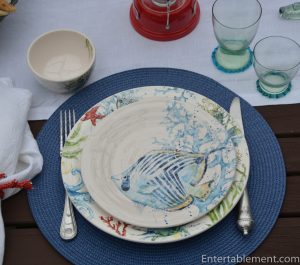 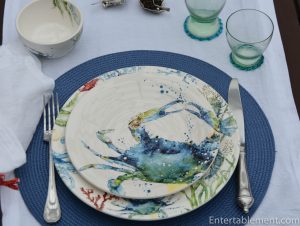 Damn!  There’s nothing like finding out you can’t have something to convince you that you really, really want it. I had been mildly interested before, but now I really wanted it. I mentally kicked myself for procrastinating earlier and began sorting out which pieces were most worth pursuing. I particularly liked the deep swirling shades of blue featured in the sea creatures depicted on the salad plates. 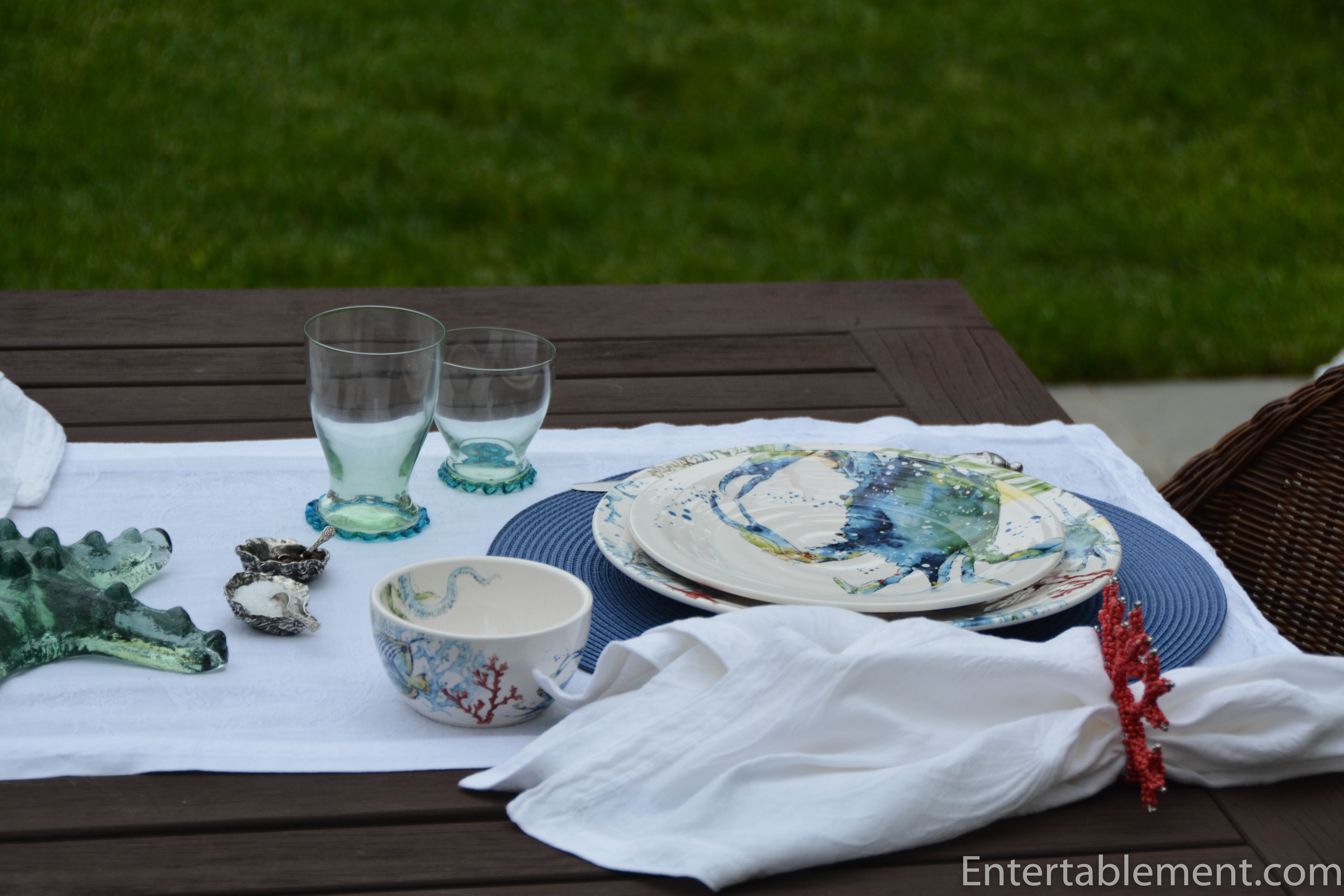 The set also had dinner plates, pasta bowls, mugs and fabulous little bowls which are perfect as finger bowls when serving a messy dish like lobster, which we did last week when the family was down.

The challenge was on!  I tracked down three sets of the four salad plates in Winnipeg, Manitoba. Apparently, Sea Life salad plates weren’t a big seller in the middle of winter in Winnipeg (known jokingly as “Winterpeg” in Canada). Hmmm.

A store in Chicago had eight of the dinner plates, bowls and mugs and agreed to ship them. My local store had the small bowls, so I picked up eight of those. Unfortunately, the challenge didn’t end there. The box from the Chicago store was very poorly packed, so five of the eight mugs were smashed, as was one of the dinner plates and one of the bowls. No, they wouldn’t just take my word for it. “Please return the broken items to your local store and we will credit you for them. And yes, you will pay to ship again on the replacement items.” If and when we can find them from yet another store, with even more reduced inventory. Grrrrr.

Annoyed and frustrated, she persisted. Sheer stubbornness carried the day. Someone once described me as having the persistence of a terrier, and it’s an accurate accusation. Over an hour on the phone to various stores to track down the remaining items and it was done.  Yes! Success! 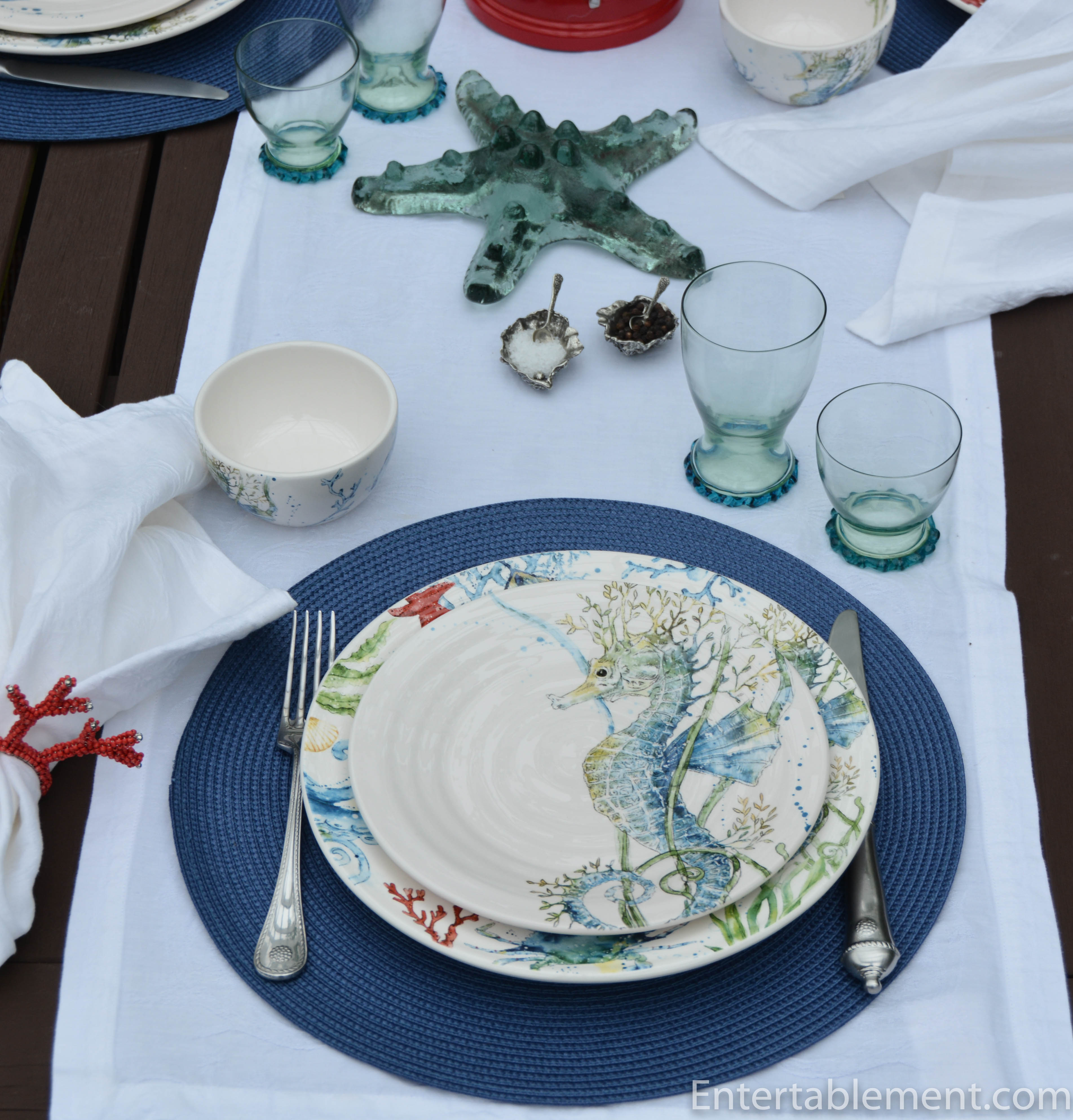 I styled the plates with blue placemats, also from Pier 1, a couple of years ago. The flatware is Berry & Thread by Juliska. 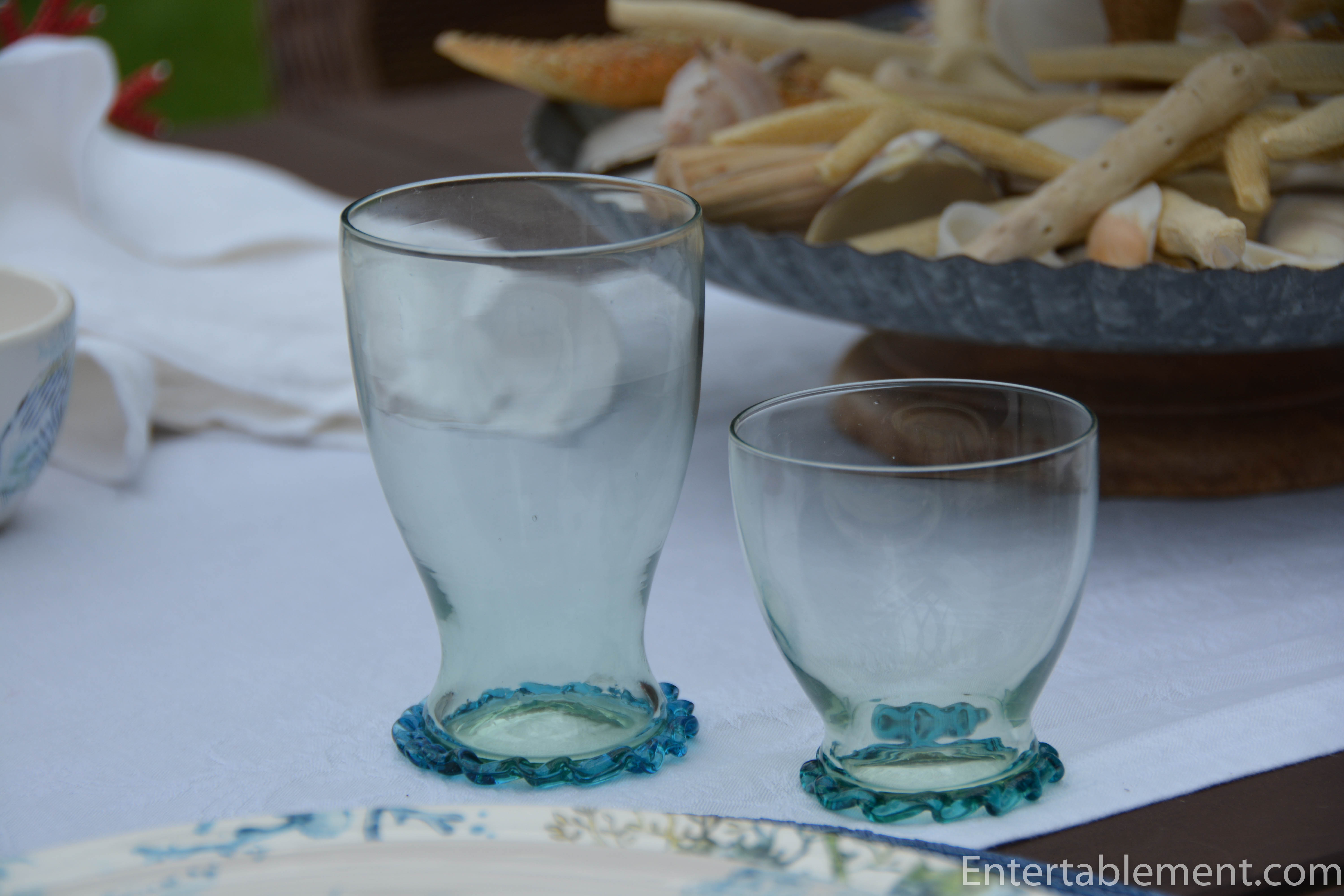 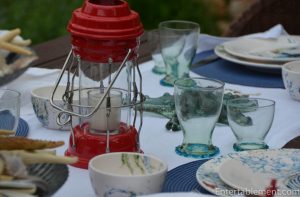 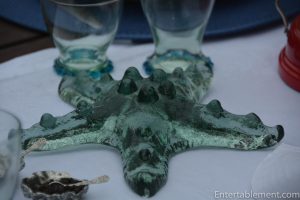 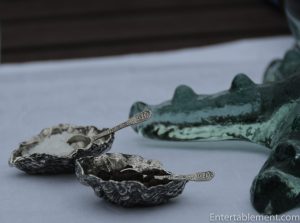 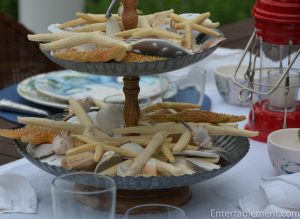 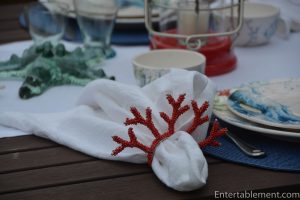 I’ve had most of the accessories for years, with the exception of the coral napkin rings and the galvanized two-piece stand which were from Pier 1 this year (yes, they’re also discontinued)…

When is she going to put the water in?

And the food? Anything in here for me?

My usual assistant, Tigger, was on the job.  He was just poised to shove his paw into the glass on the top – I can see it coming. If there had been water in that glass he’d have done it. It’s a revolting habit he has, but at age 16, I’m unlikely to change him.

Enjoy the upcoming weekend, dear readers!  I hope the weather is fabulous wherever you are. 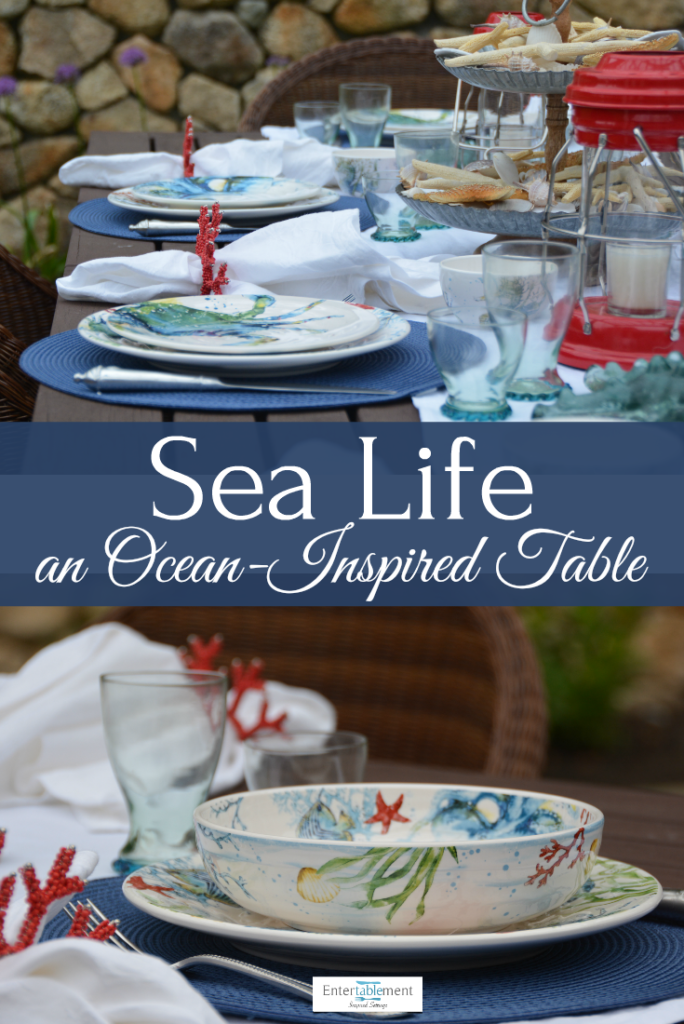