Delicious by Pier 1 For a Touch of Glamour 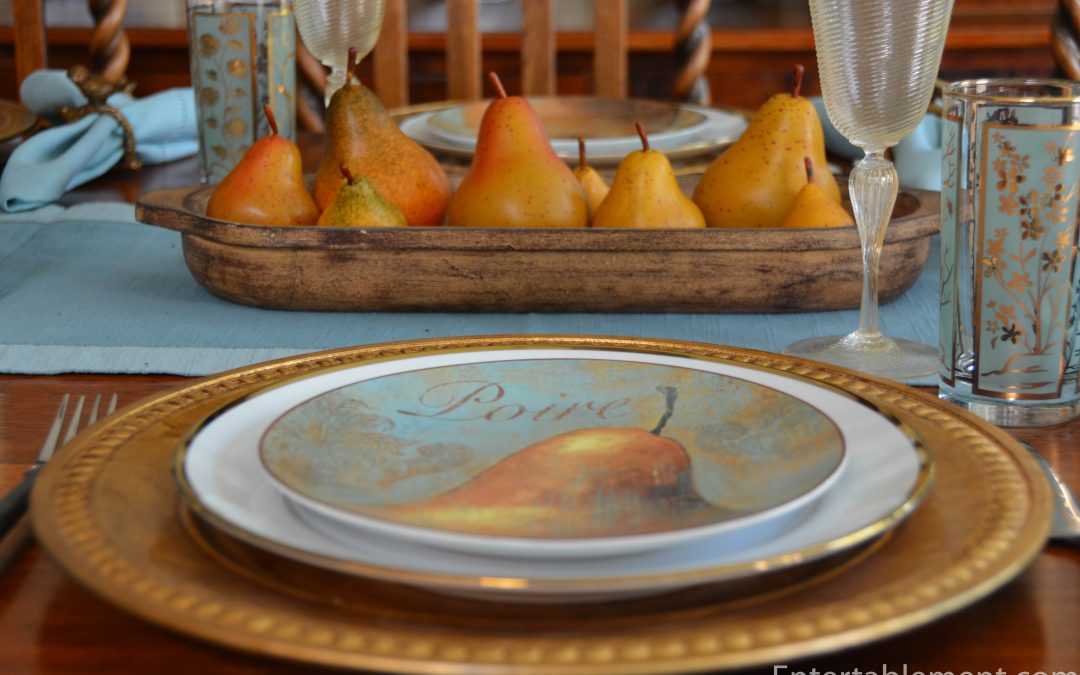 Delicious it is! A relatively recent pattern by Pier 1 (2010-2015), I missed it in stores, but saw the plates on Pinterest at some point and the hunt was on. 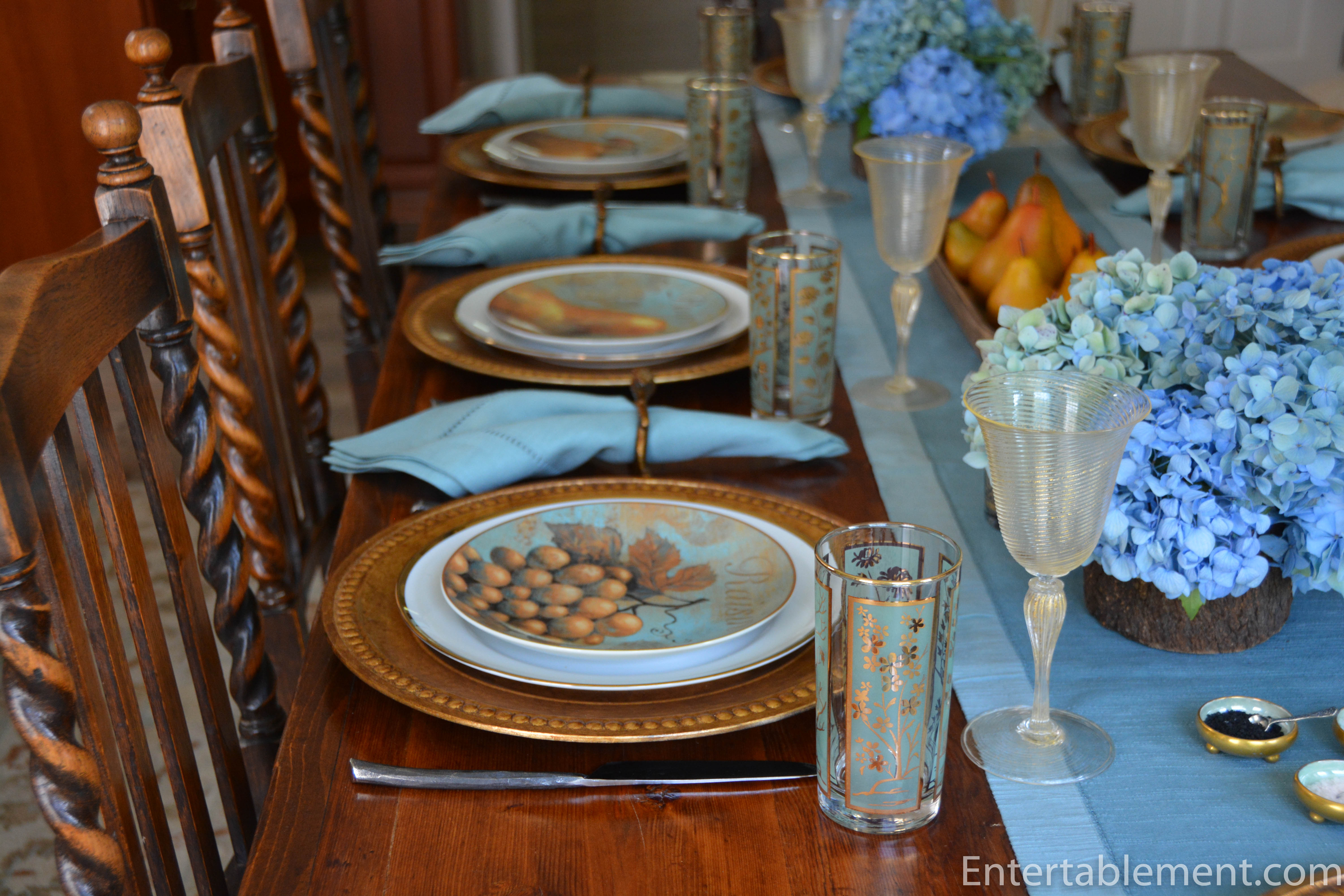 Replacements had nothing, likewise eBay. Not deterred, I requested Replacements to “find this for me” and put out an alert on eBay. In time, my patience was duly rewarded. A few months ago, I got a set of four on eBay for – wait for it – $15. 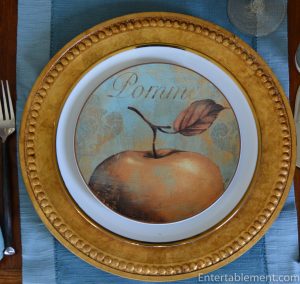 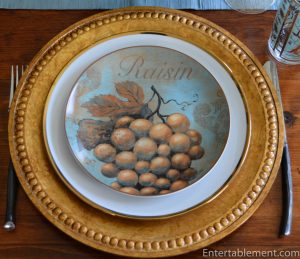 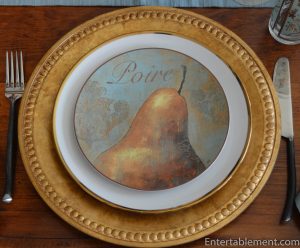 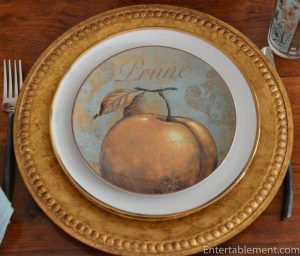 My first thought was to set a table for four with the smoke blue napkins from Pottery Barn I had acquired years ago, along with the Grace white & gold dinner plates (discontinued) and Gold Luster chargers, from Pier 1. 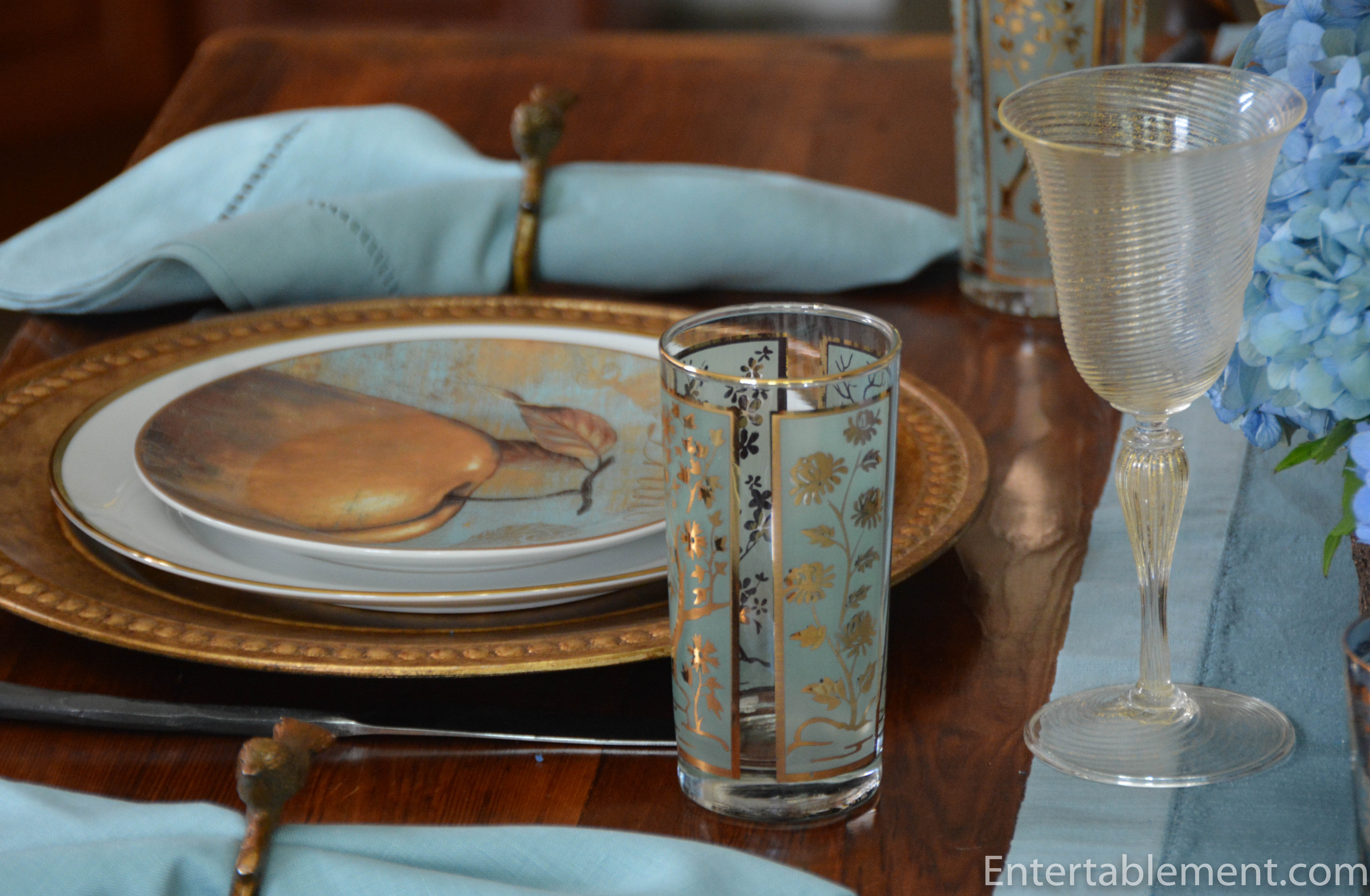 I had found these ’60s, Mad Men-esque tumblers when I was sourcing some vintage beer glasses for a certain son-in-law’s Father’s Day gift (more on that in another post).  They’re called “Four Seasons” by Libbey and they were also very reasonable: $60 for 8 glasses. At first, I hadn’t thought of putting them together with the Delicious plates, but the idea came to me on one of my morning walks. 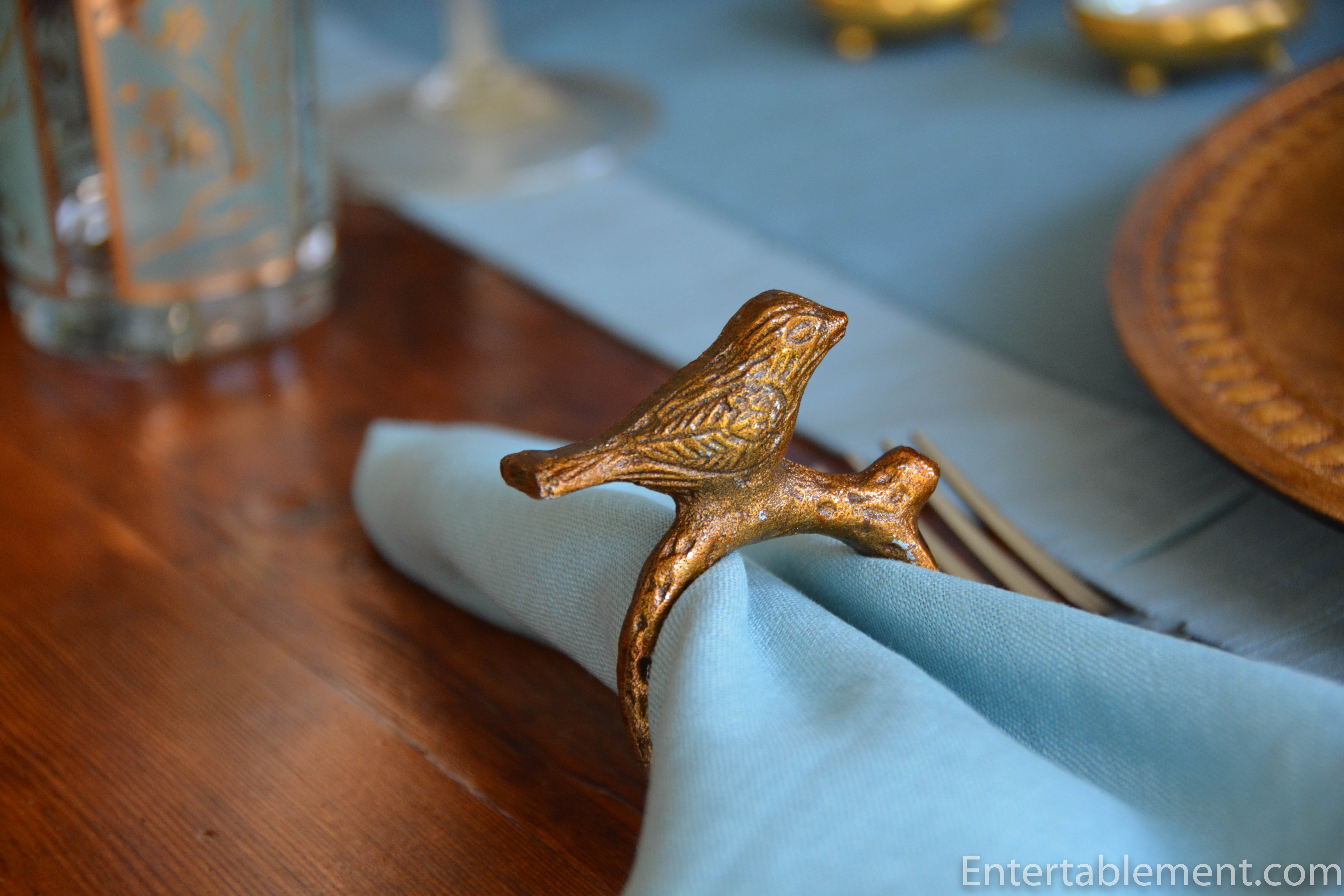 In the meantime, I acquired the bird napkin rings on Amazon 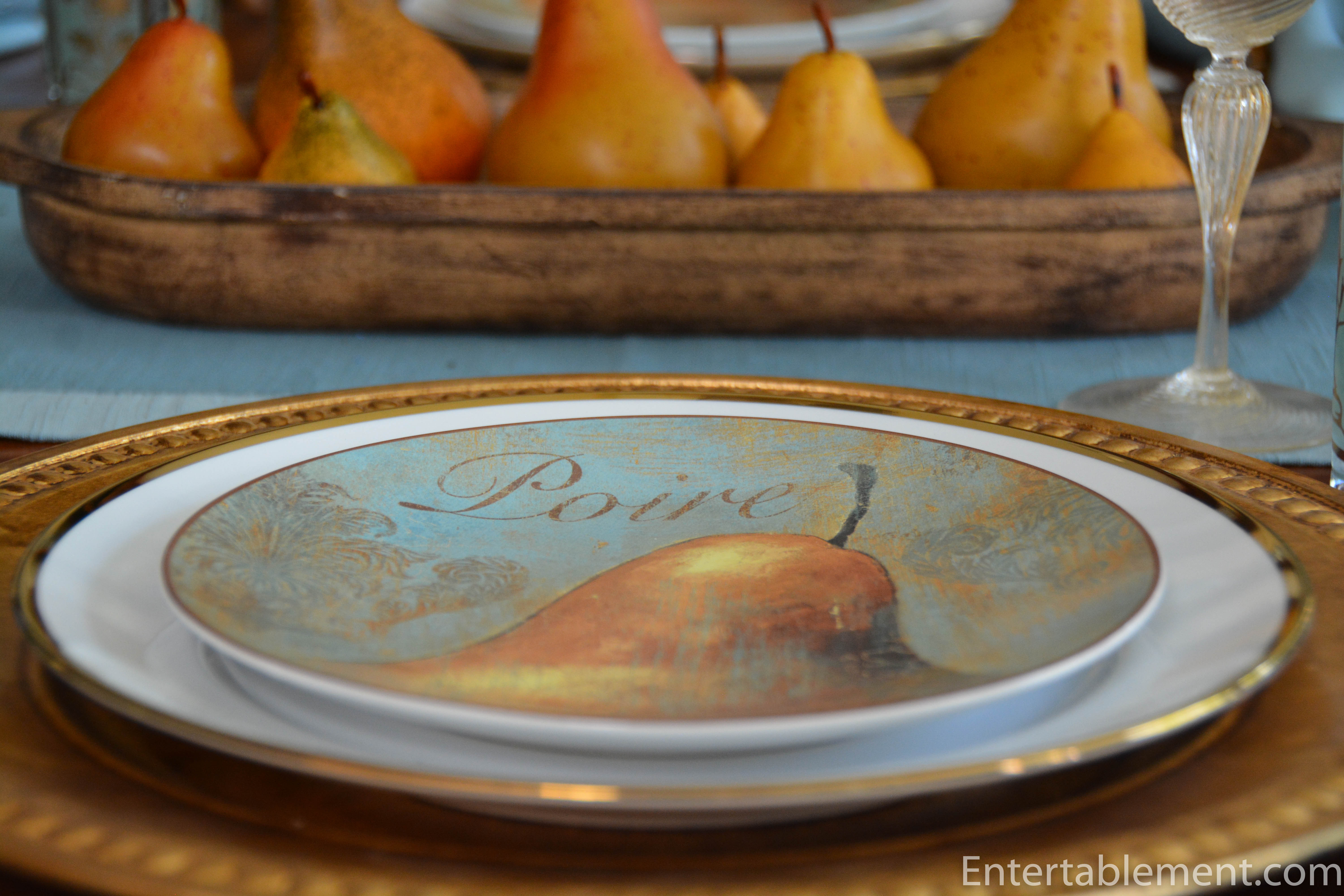 And found the quite realistic faux pears at Pier 1 (now out of stock, I think.) 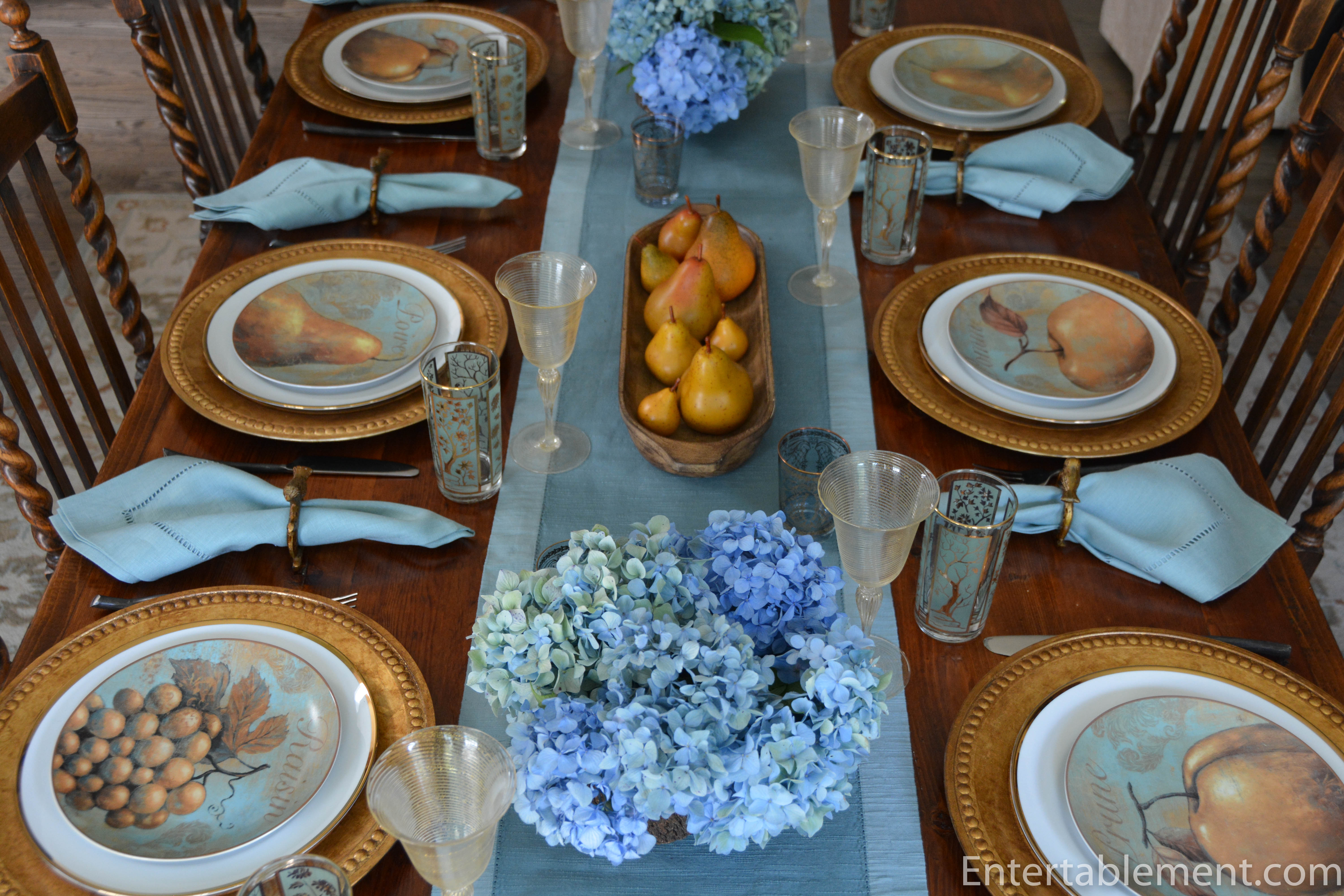 The second set of plates became available on eBay just a few weeks ago. They were a bit more than $15, but I wasn’t willing to wait for another such killer deal. I wanted to set the table! 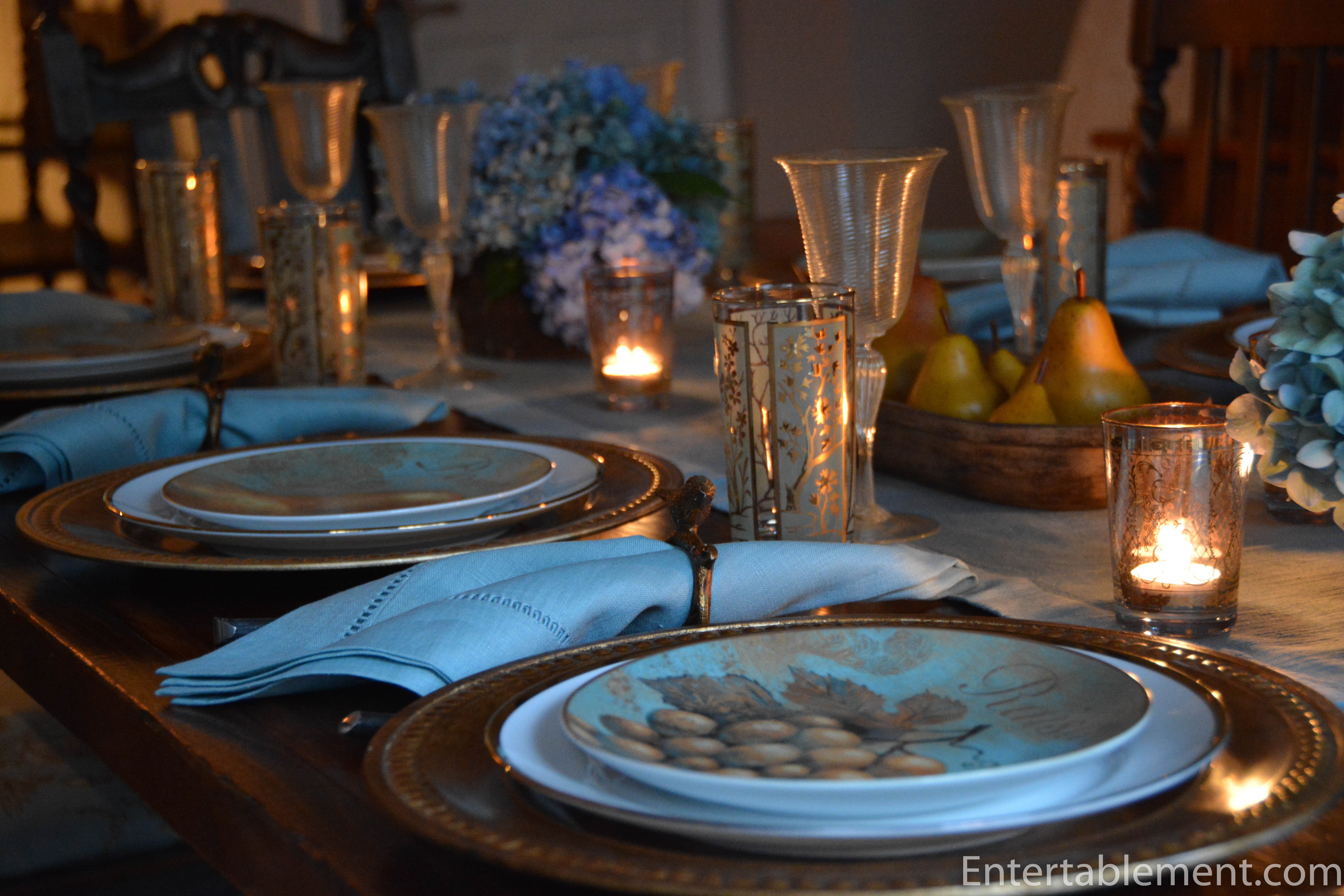 It looked even prettier at a night. 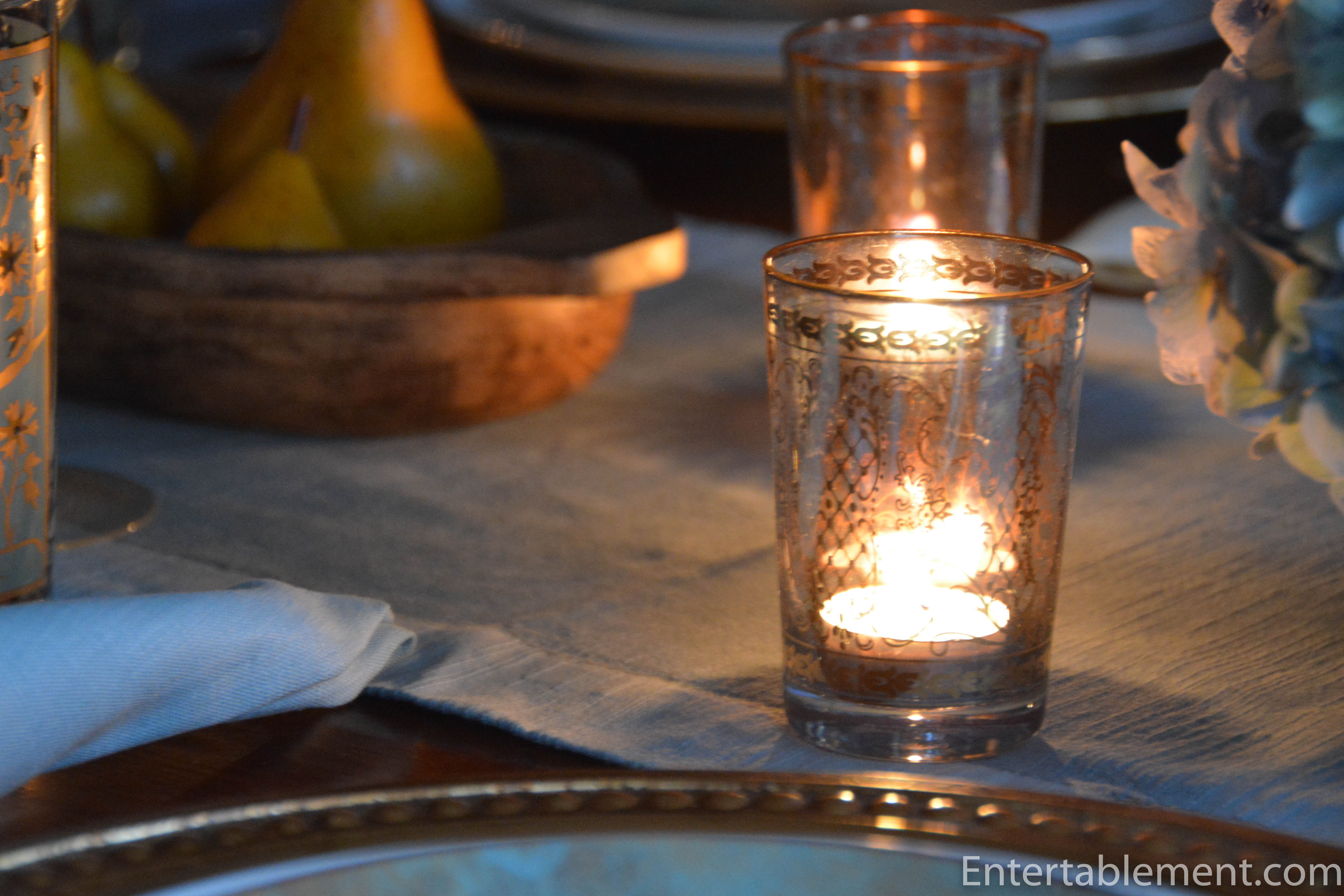 The gilded tea lights are from a zillion years ago. 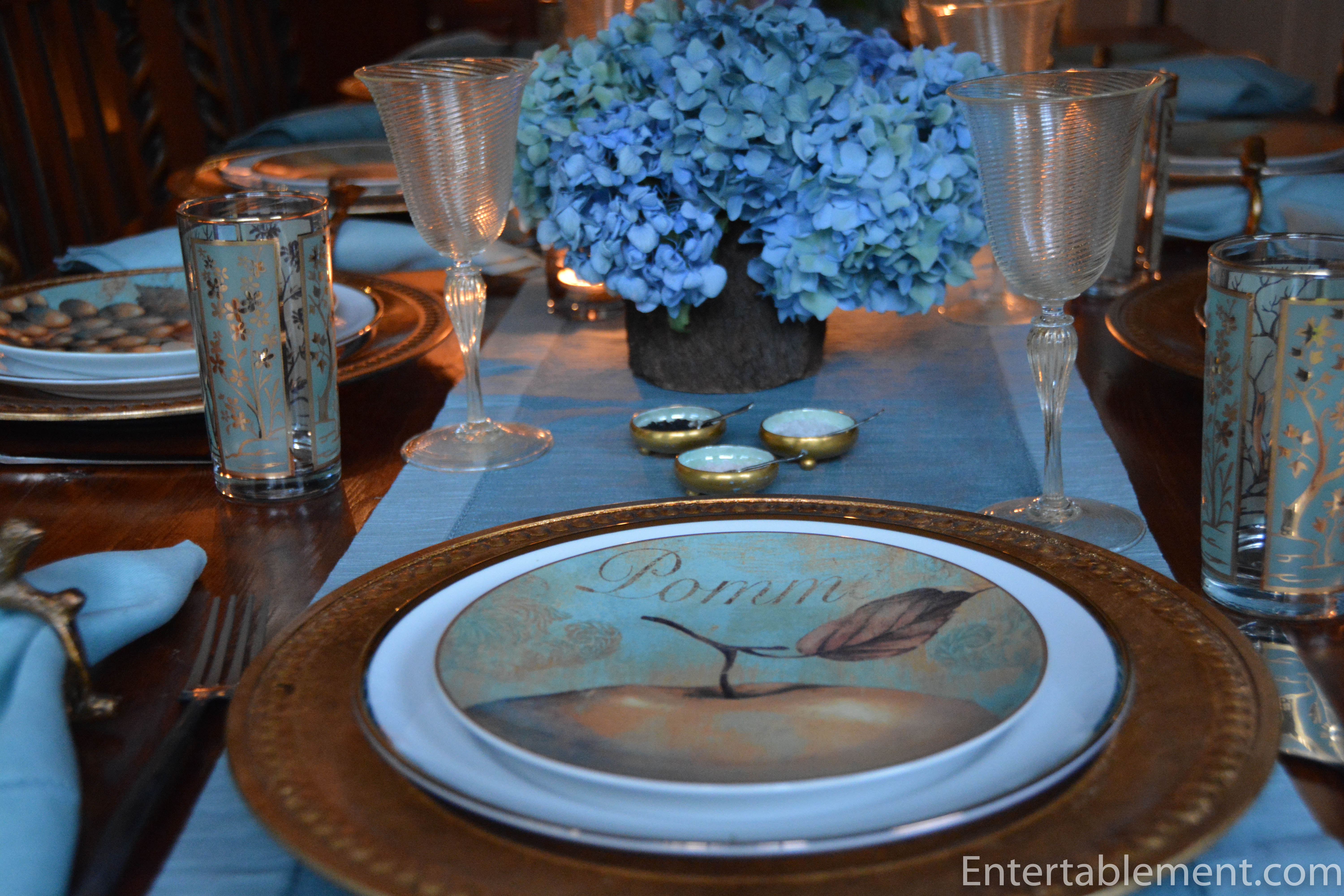 And the hydrangea are from the garden. They’re in a bark-covered vases from Save-on-Crafts. 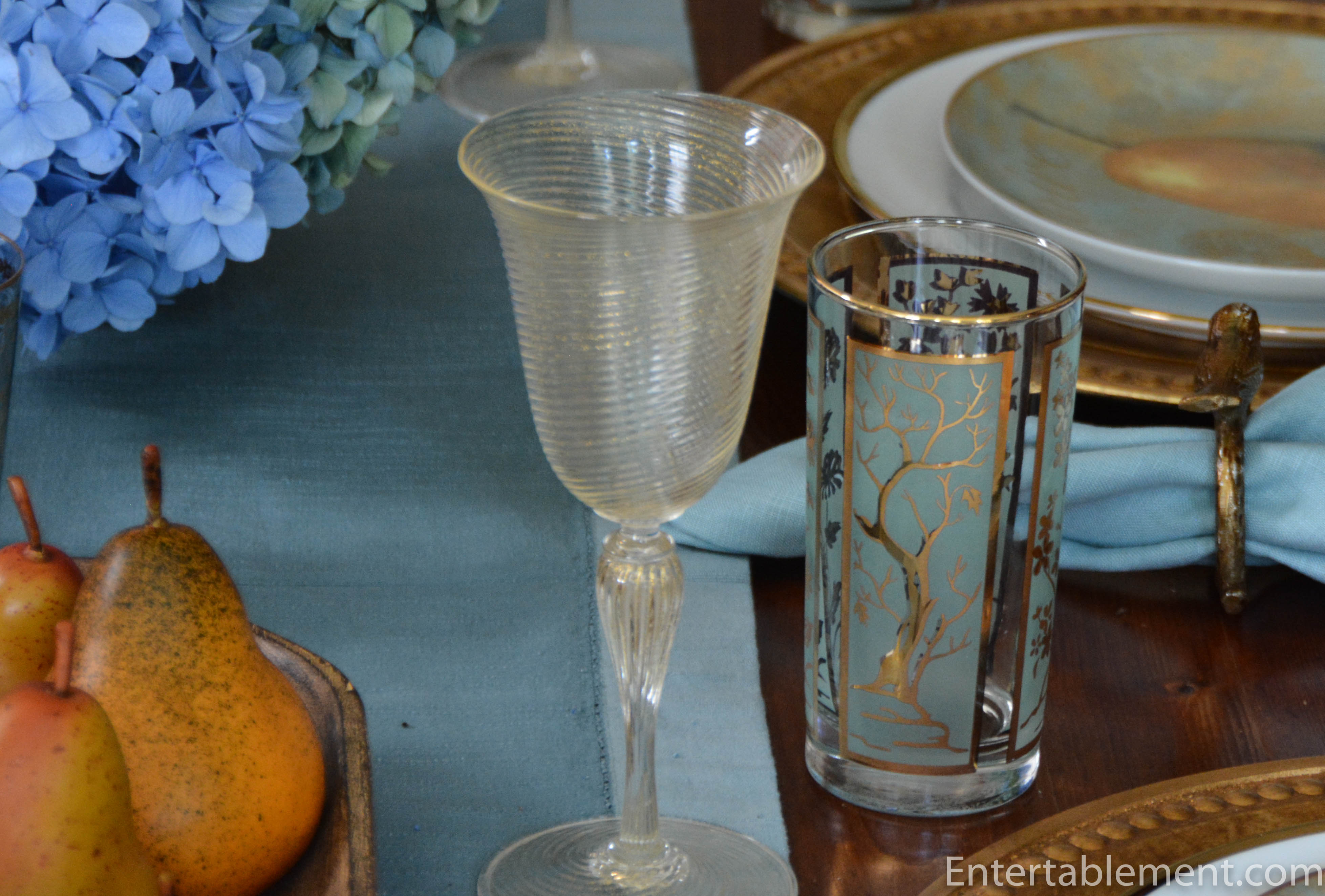 The only “spendy” item (as my business partner, Gordon calls it), are the antique Venetian glasses. Absent those, the table is my Deal Of The Century: You Too Can Have a Baroque Antique Gold Look For Less! Doesn’t it look like an advertisement for Old Hollywood? 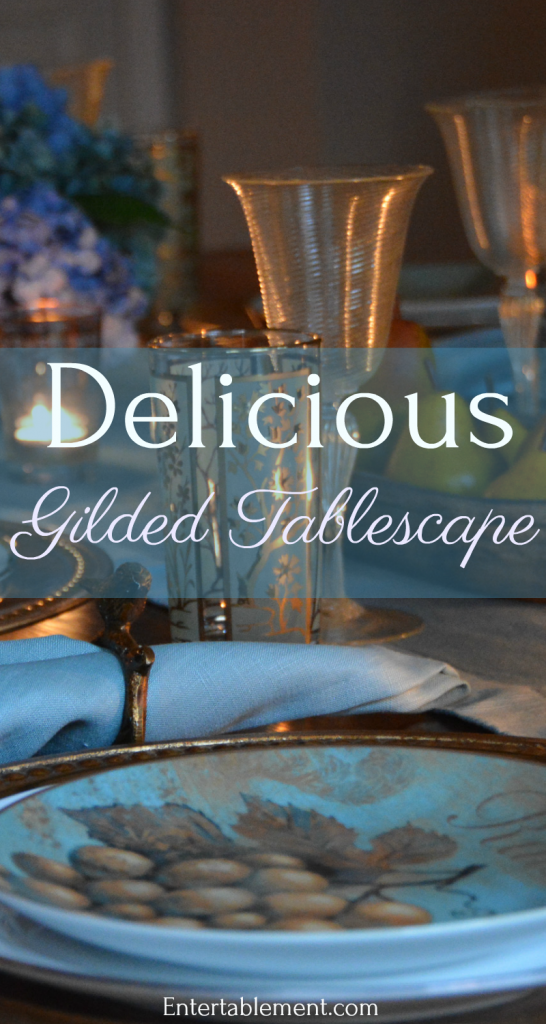 The Twig flatware is from World Market. I like the way it echoes the texture of the grape stem. 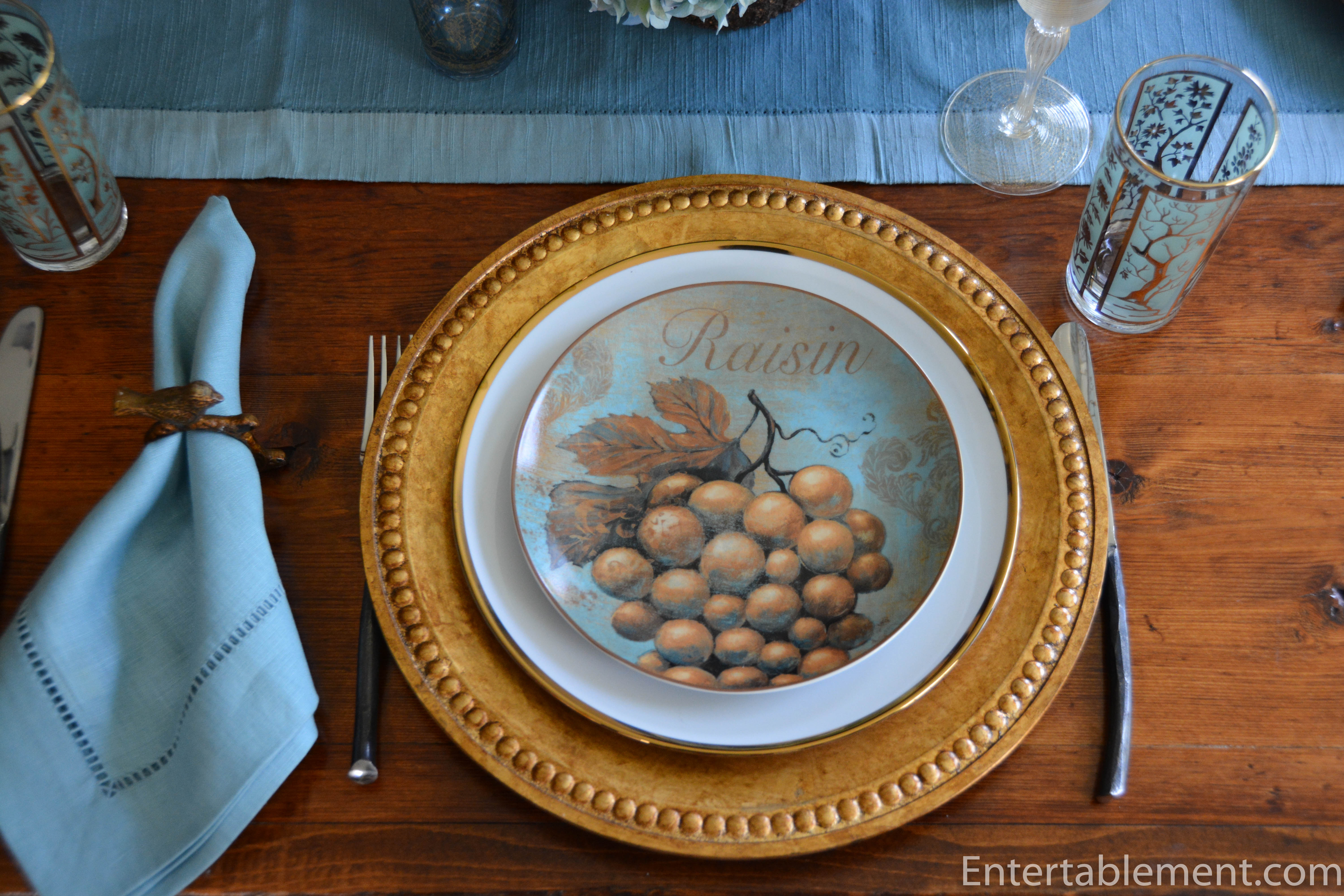 The Beaded Gold chargers are from Pottery Barn, several years ago, but they still sell them. 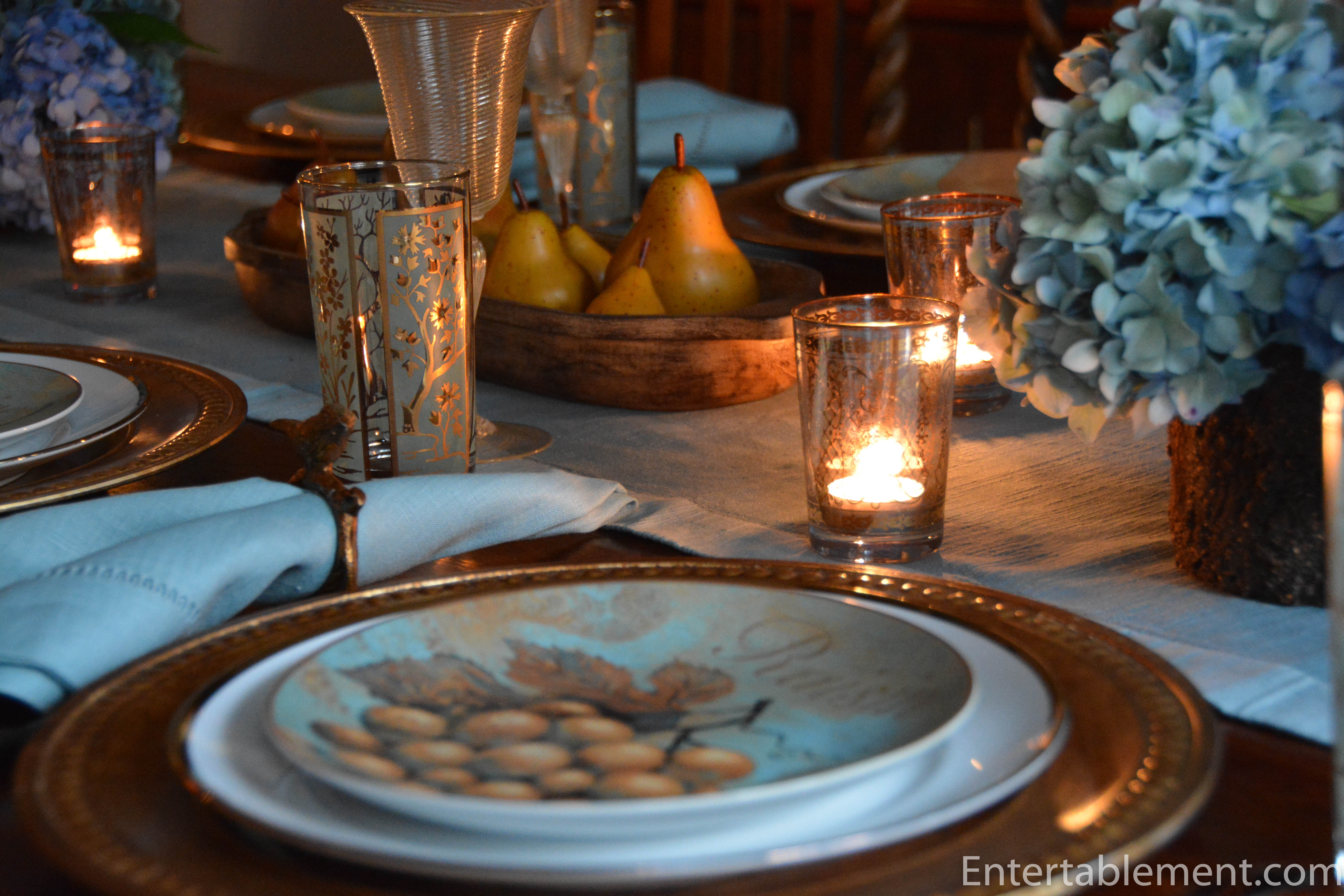 I love it when a table come together from disparate parts that you didn’t really think would work together, or never occurred to you to put together. 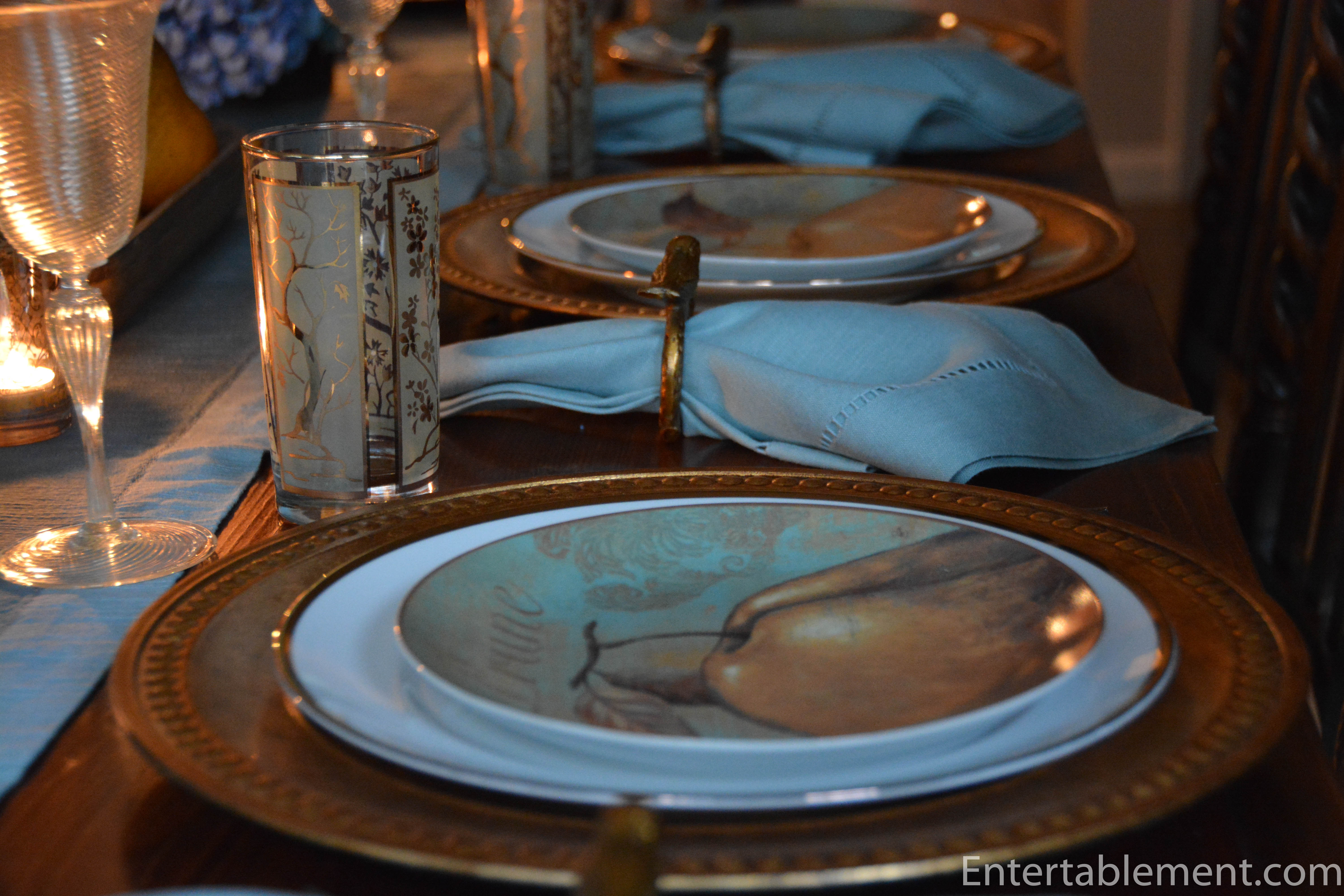 Last but not least: 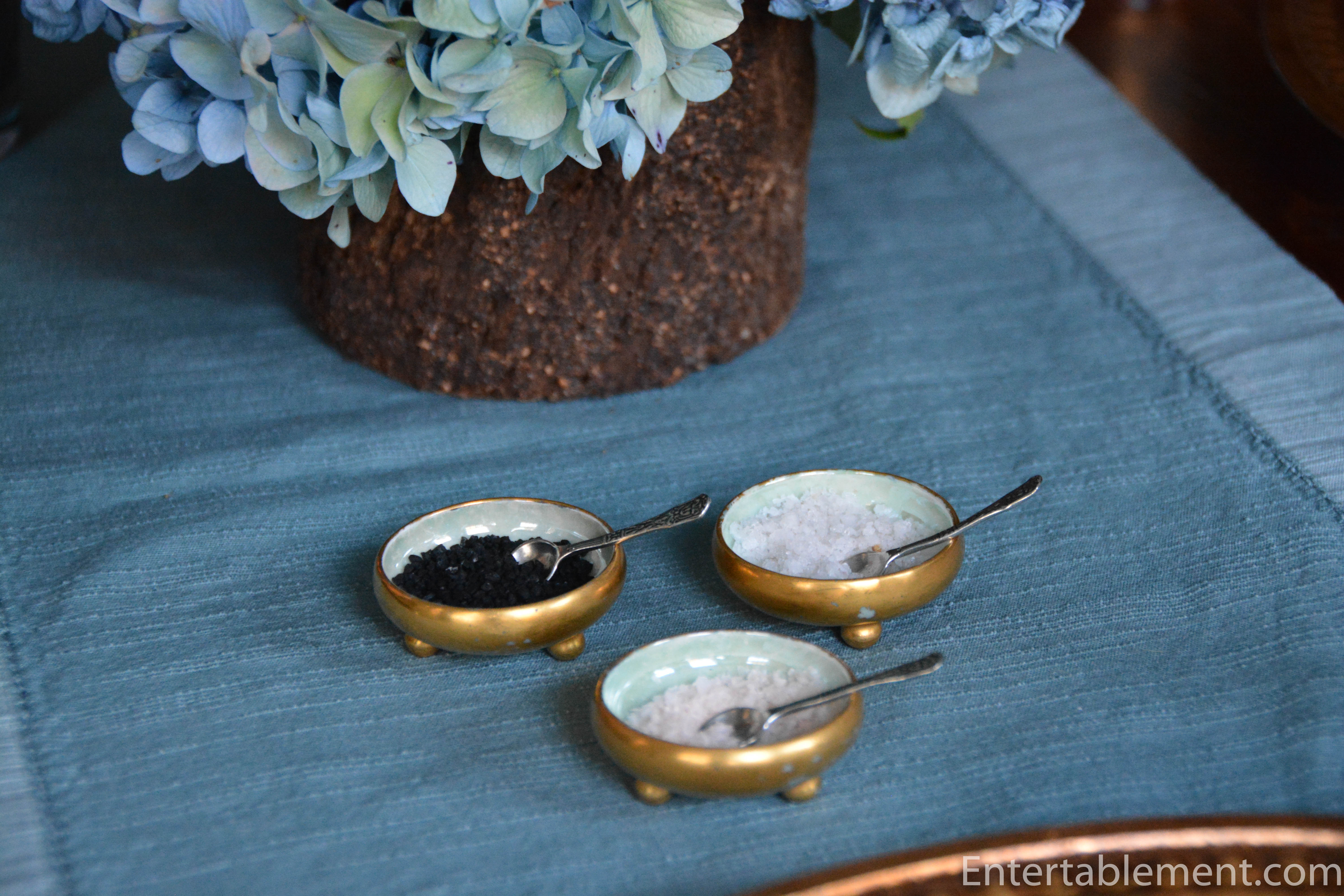 Even the open salts have a soft gold gilding. They were from Etsy a long time ago, but were ridiculously inexpensive (as in $5 for three, I recall). 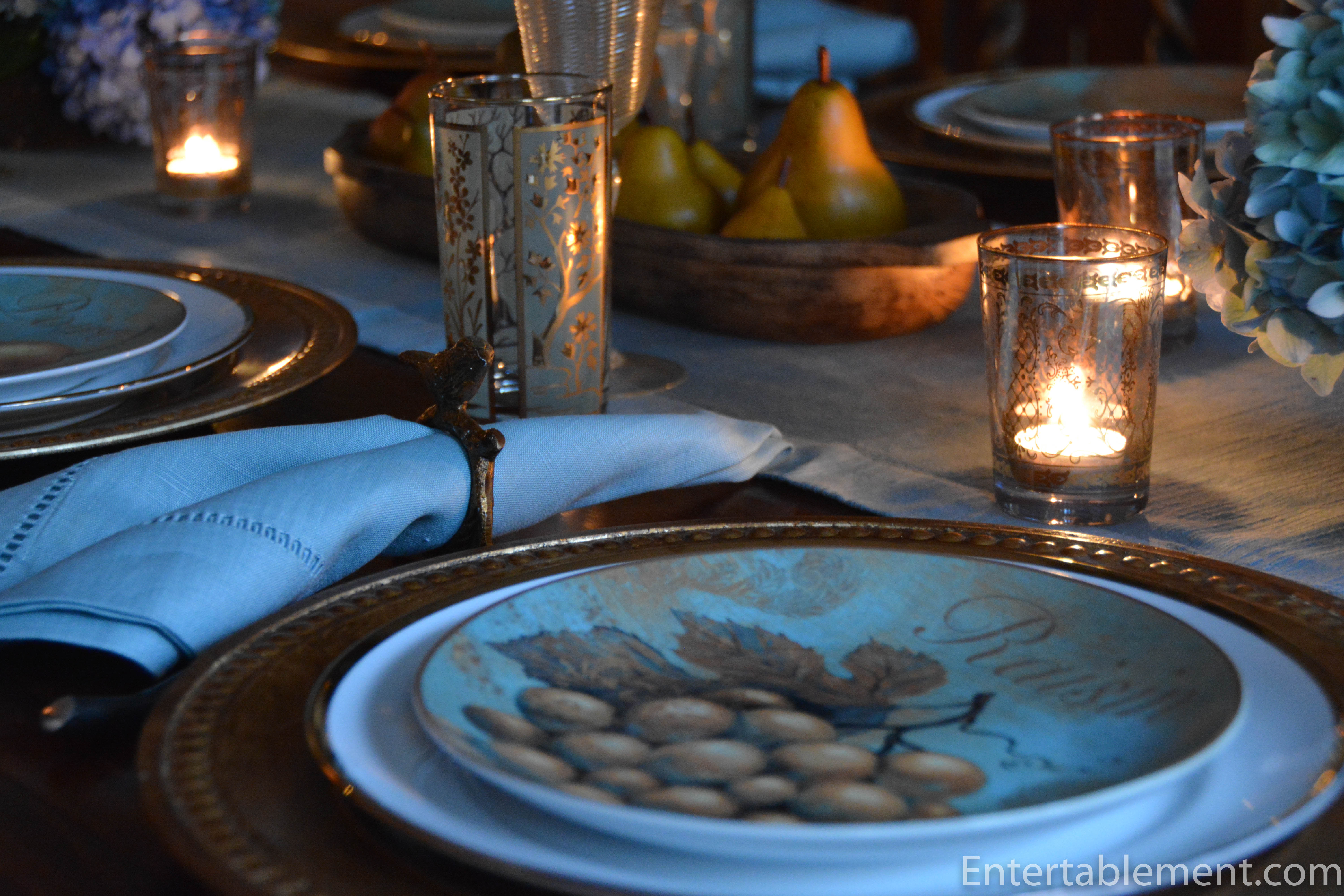 Thanks for visiting, everyone!