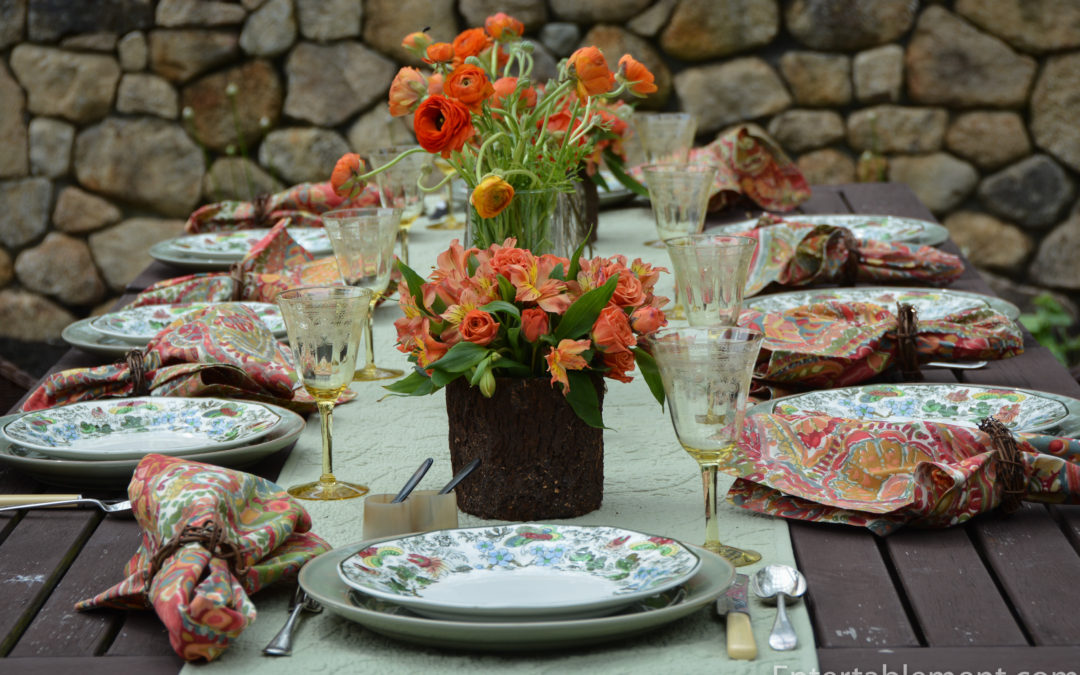 Vintage octagonal plates in a rich palette of greens and deep oranges. Sounds like late summer would be the perfect time to give those an outing, doesn’t it? 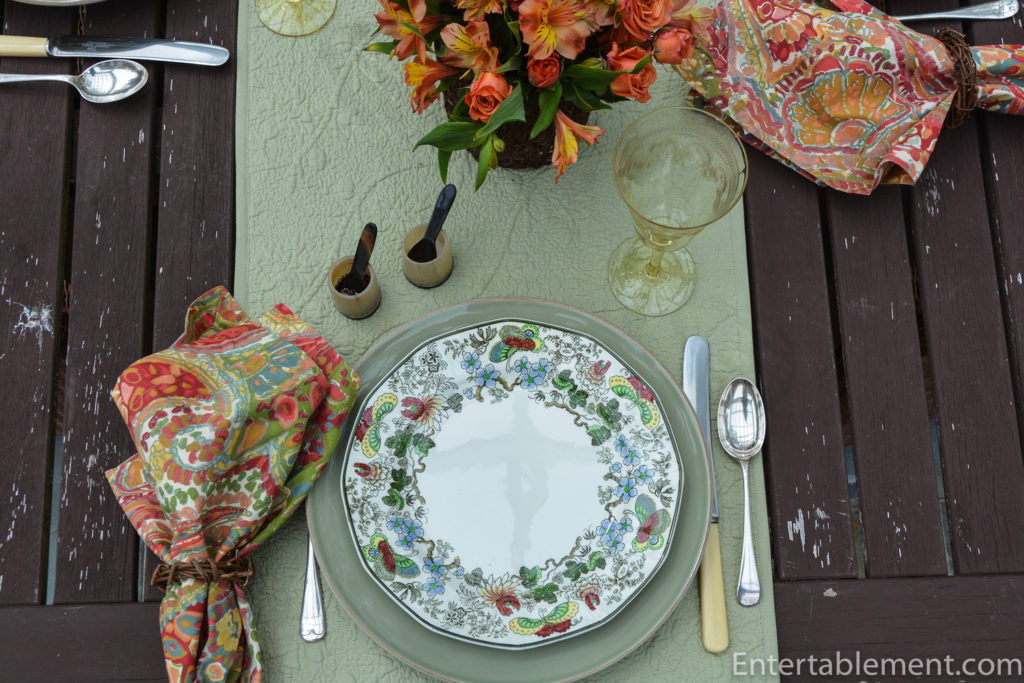 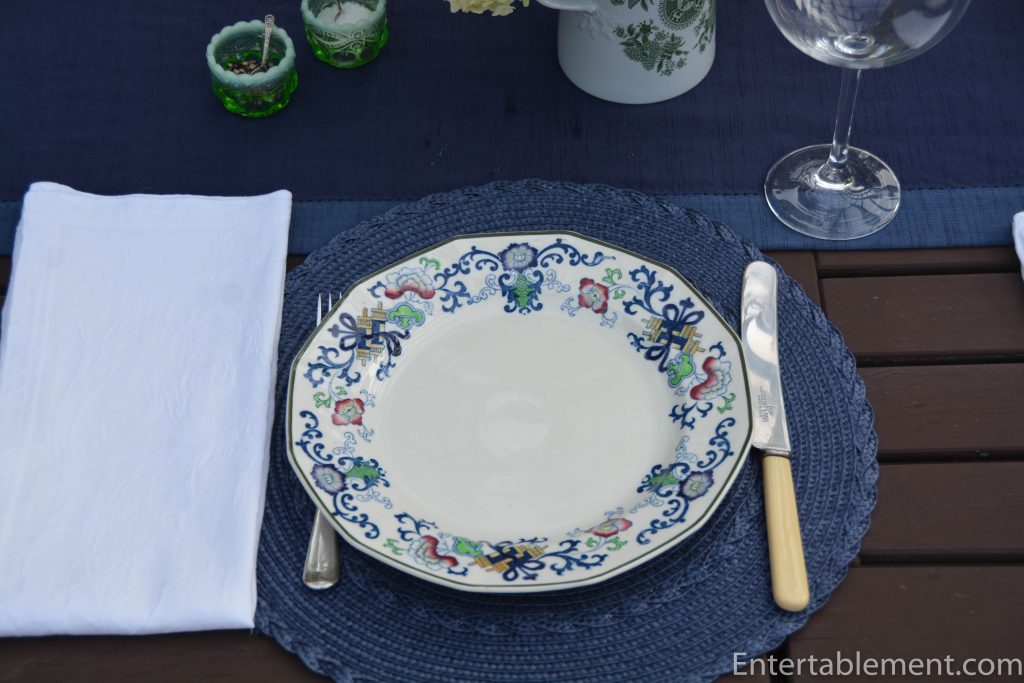 Then the information trail goes a bit fuzzy. Nankin was produced as early as 1879, but information on Indian is as scarce as the pattern itself. Imagine my delight when nine luncheon plates popped up from Replacements. Yes! 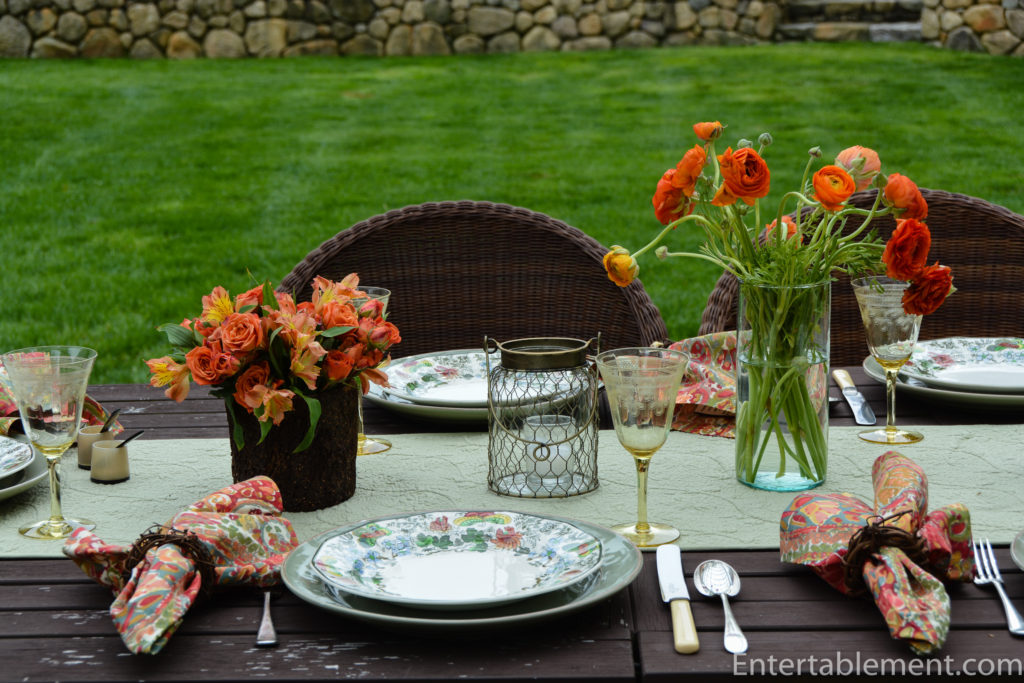 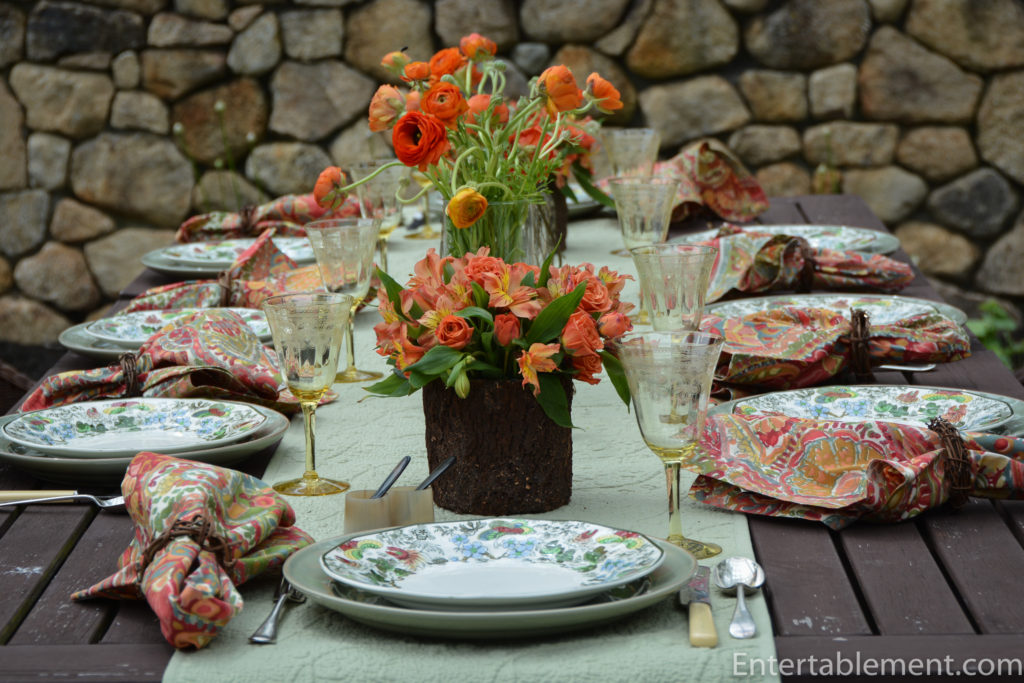 Indian is enthusiastically decorated, so it was an interesting styling challenge. Deep orange flowers seemed a fairly obvious choice for centrepieces. I went with a textural mix of nasturtiums (I knew I’d find another use for those, last shown with Bideford Aqua). alstroemeria and branch roses. 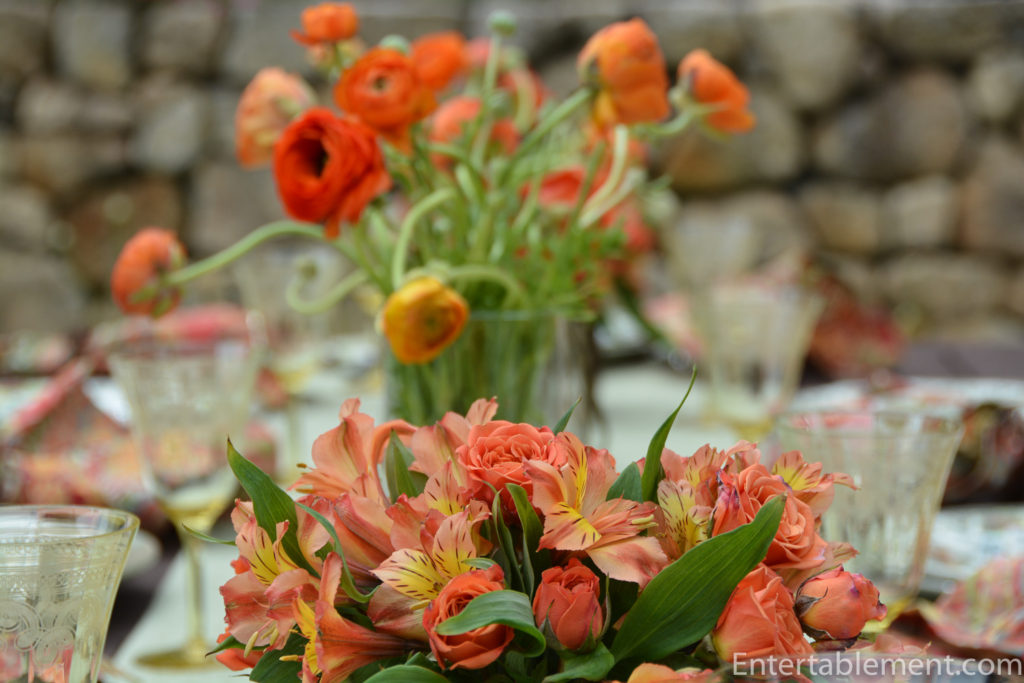 I considered plain cream under plates or chargers but settled on sage green Cambria plates from Pottery Barn. They’re big enough to act as a charger and provided a solid, neutral backdrop. 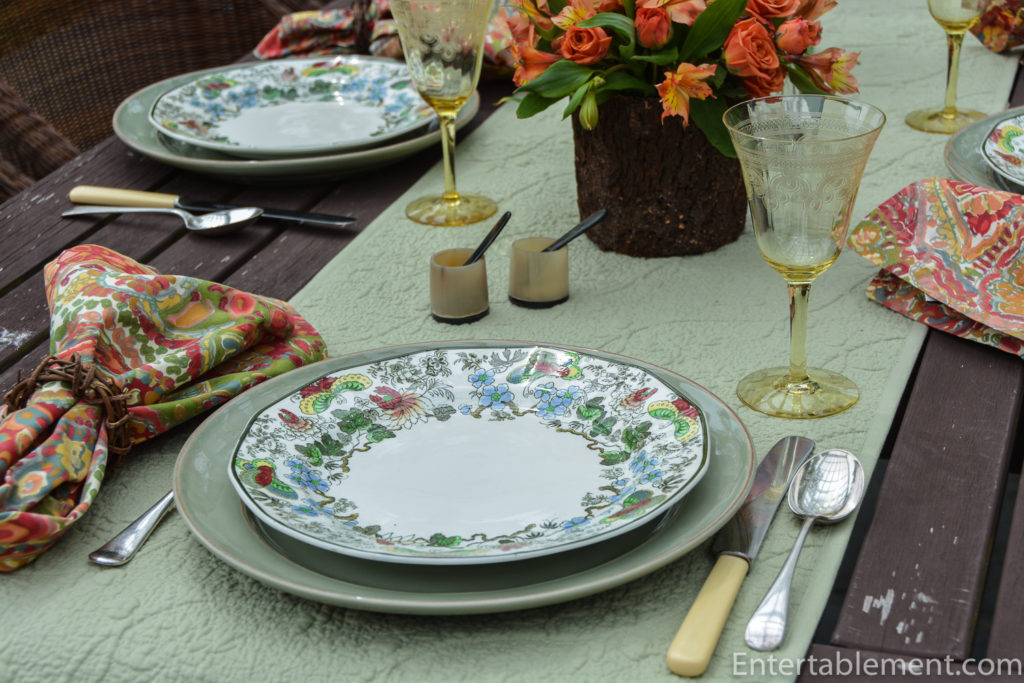 Napkins, hmmm… I played around with creams and greens, but they left the orange flowers doing all of the colour work. I usually shy away from too much pattern mixed with a pattern, as I’m never confident about the line between an artful combination and loud busyness. 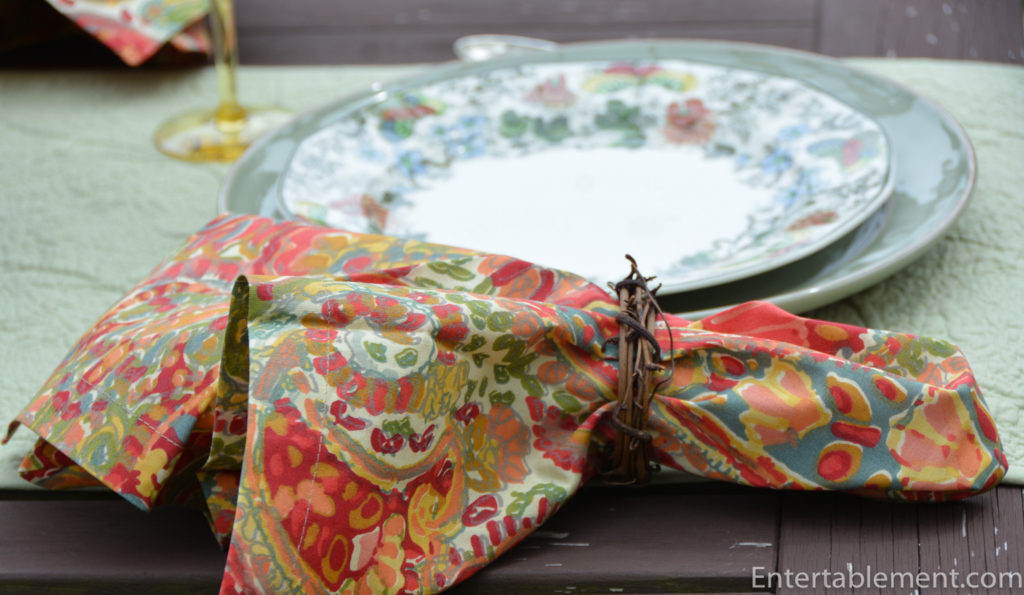 But the paisley napkins (from Pottery Barn several years ago) seemed to strike the right note. What do you think?  Too much? 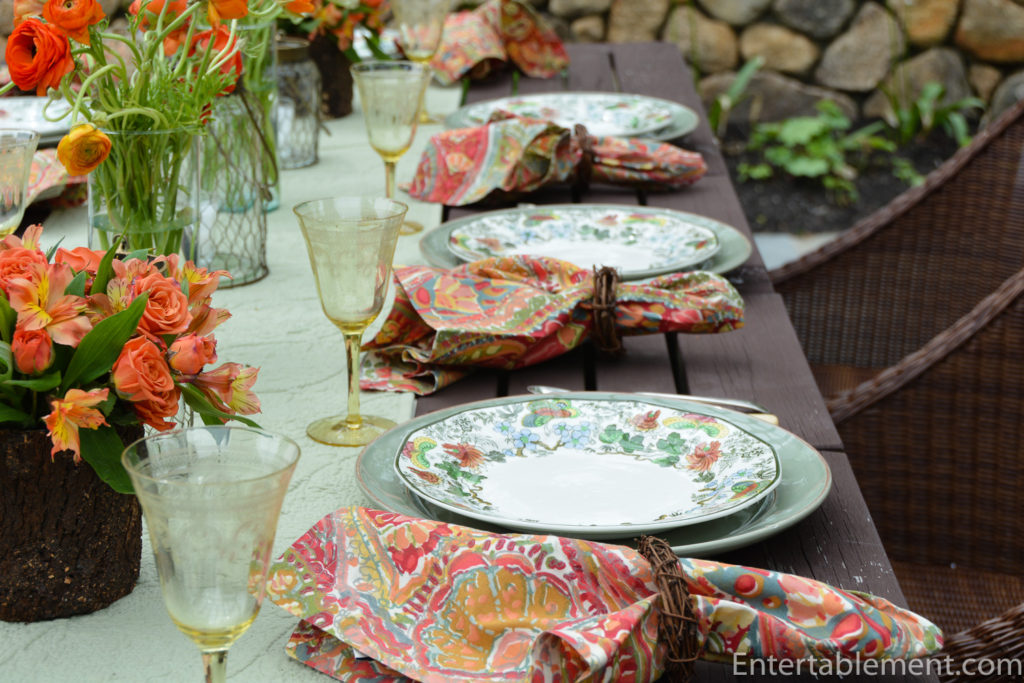 Having embarked on the paisley choice, the amber goblets slid in without too much fuss. There is plenty of gold/amber in the napkin, and it’s also present in the alstroemeria. 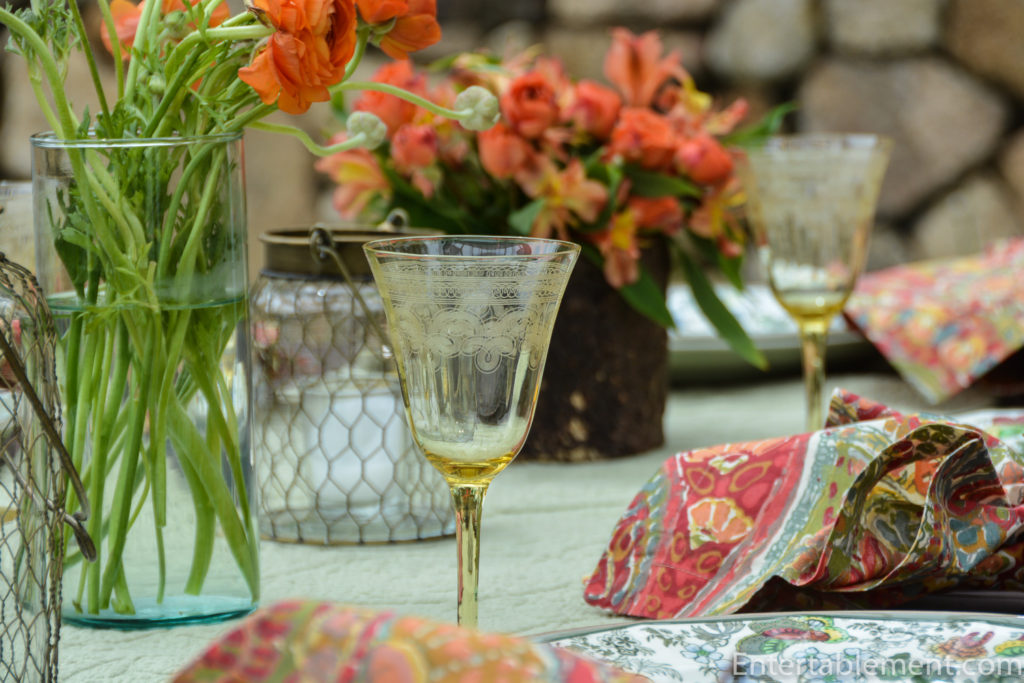 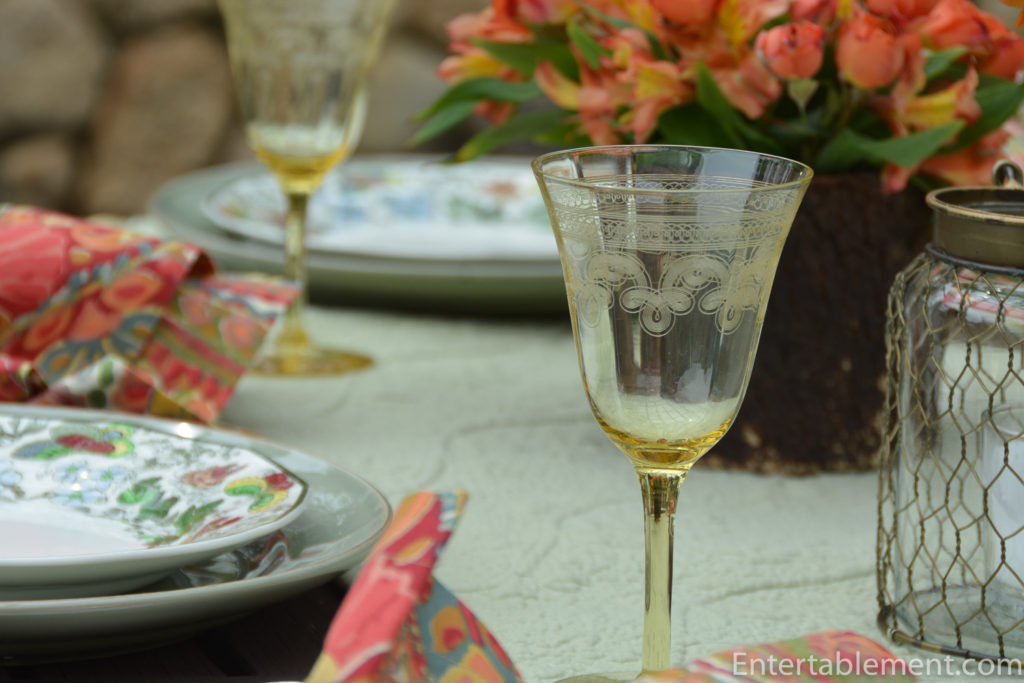 Oddly enough, I chose the runner last. With all that activity and pattern going on, a coordinating, neutral backdrop for the table seemed best. 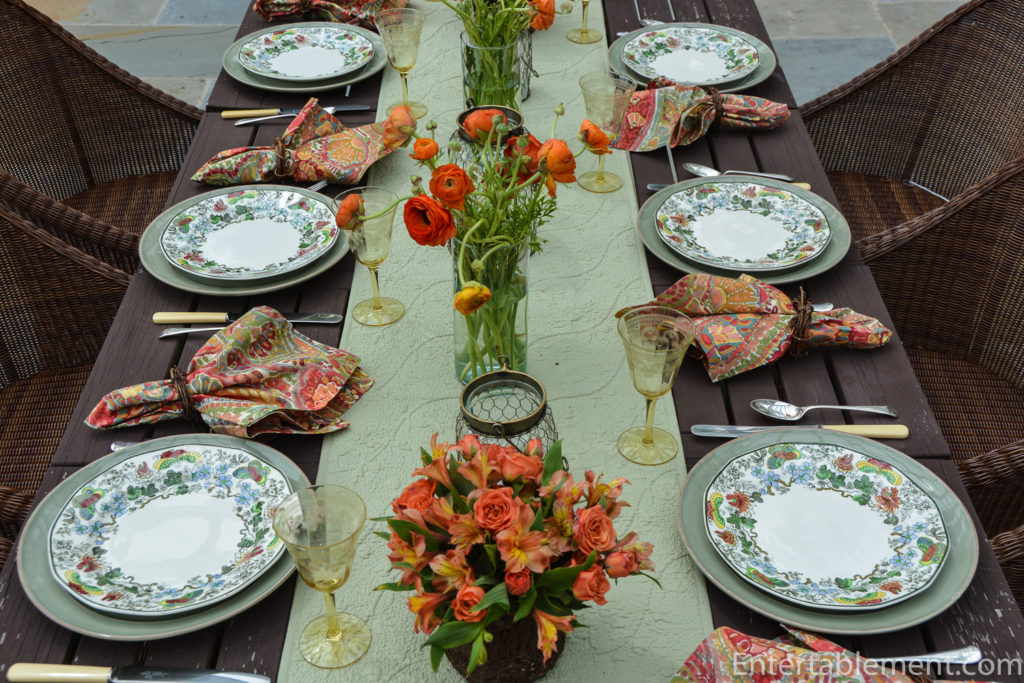 Simple flatware of the same likely vintage as the Indian plates and we were set. Horn open salts continued the natural textures of the bark covered vases and the twig napkin rings. 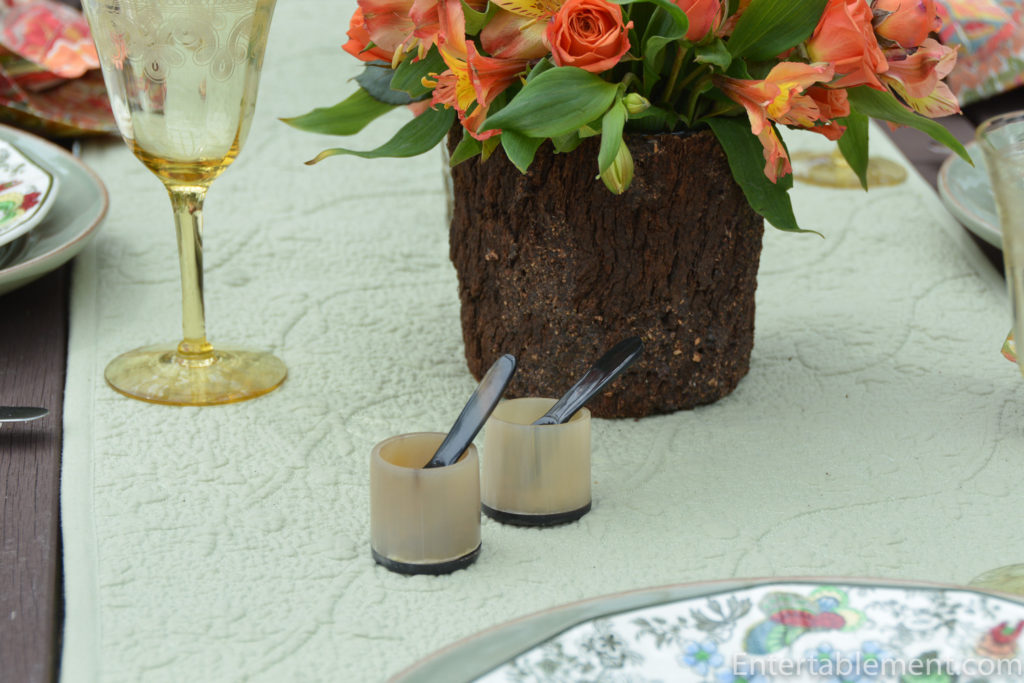 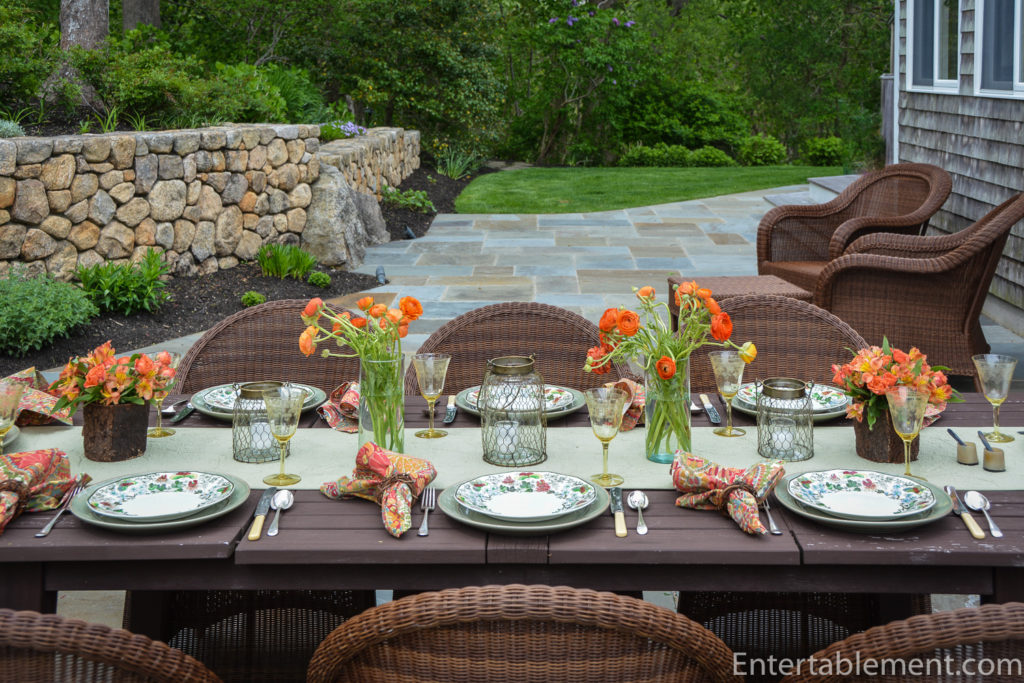 Oh, I do love those nasturtiums. Such opulent, ruffled flower heads on awkward spindly stems. An unlikely combination for practical purposes (they have to be corseted up in a tall, thin vase) but so pretty. 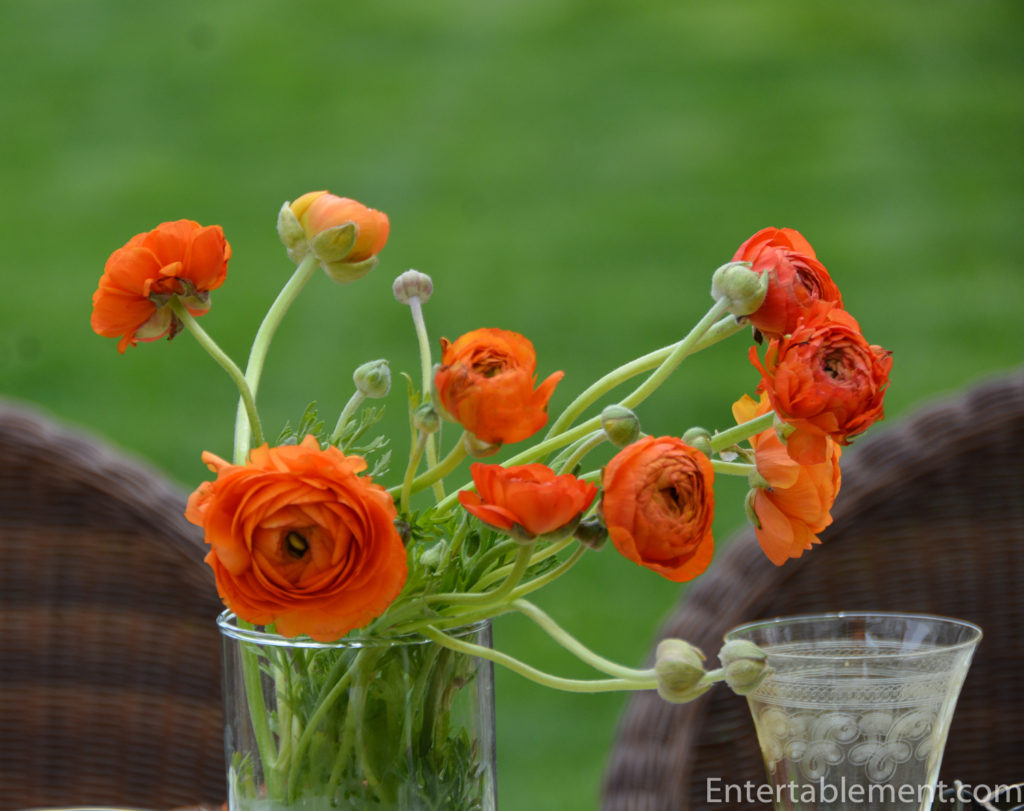 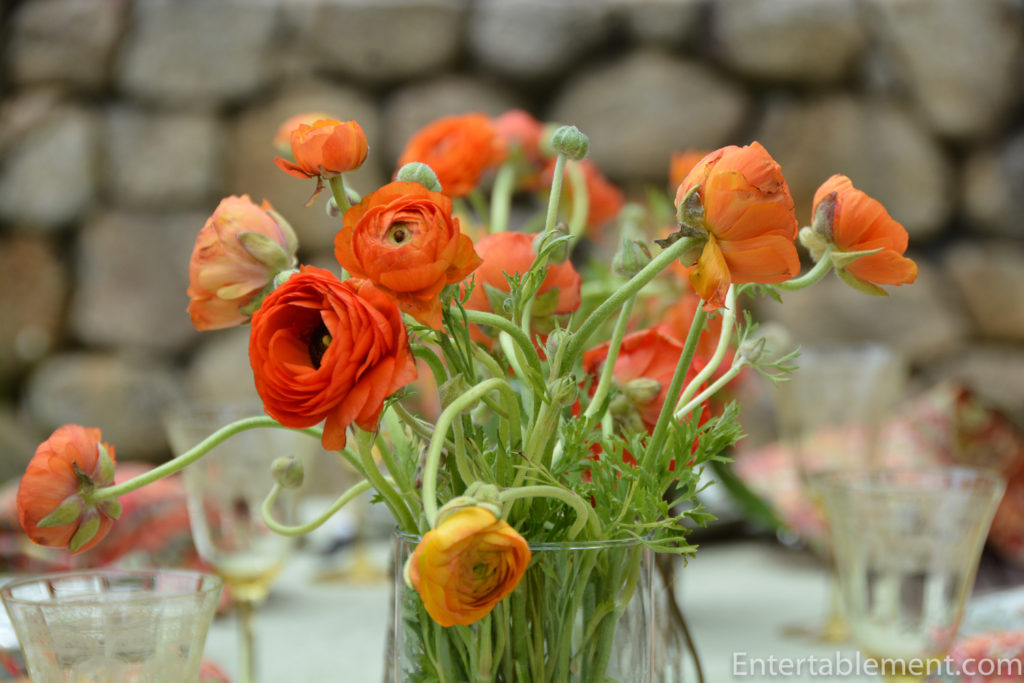 One last look at the table! 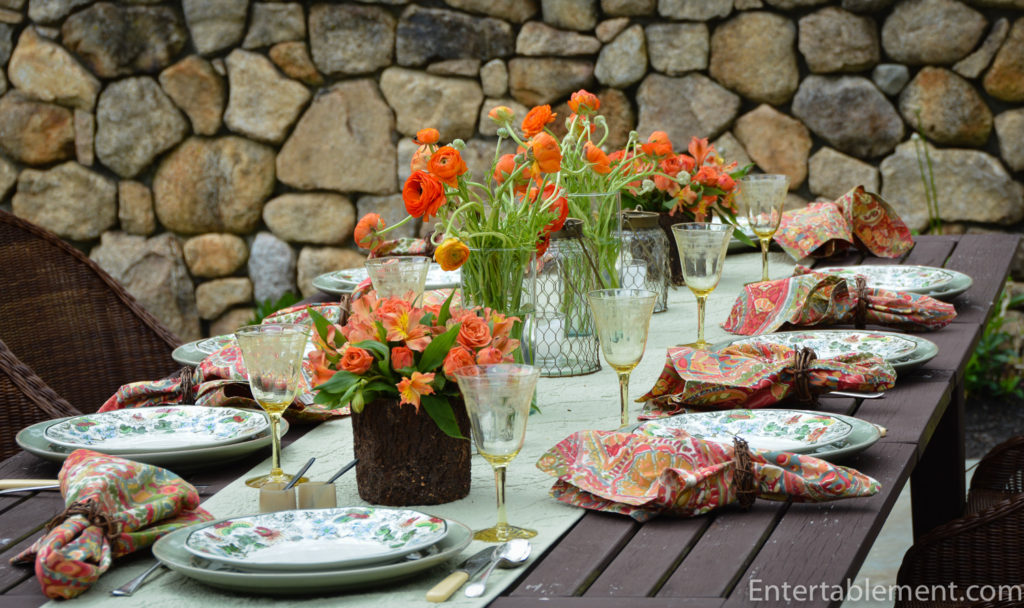 We have made our way down into Kent now and have settled into self-catering accommodation on the grounds of Hever Castle, the childhood home of Ann Boleyn, second wife of Henry VIII. It’s a fascinating property, with the oldest parts of the castle dating from 1270. It was extensively renovated by William Waldorf Astor in the 20th century, so is now in very good nick. There is plenty for small fry to do, and it’s nicely located for day trips in and around Kent. Stay tuned for updates! 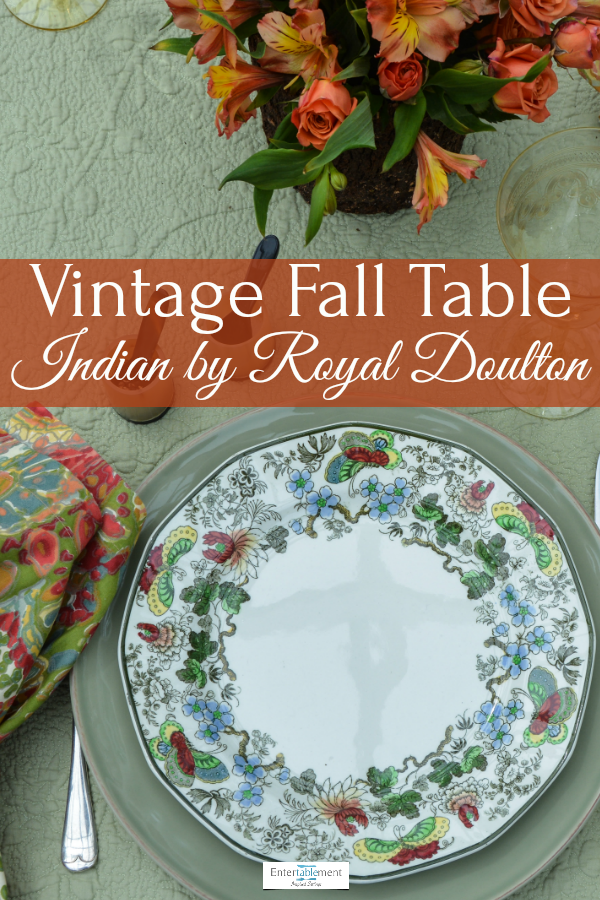