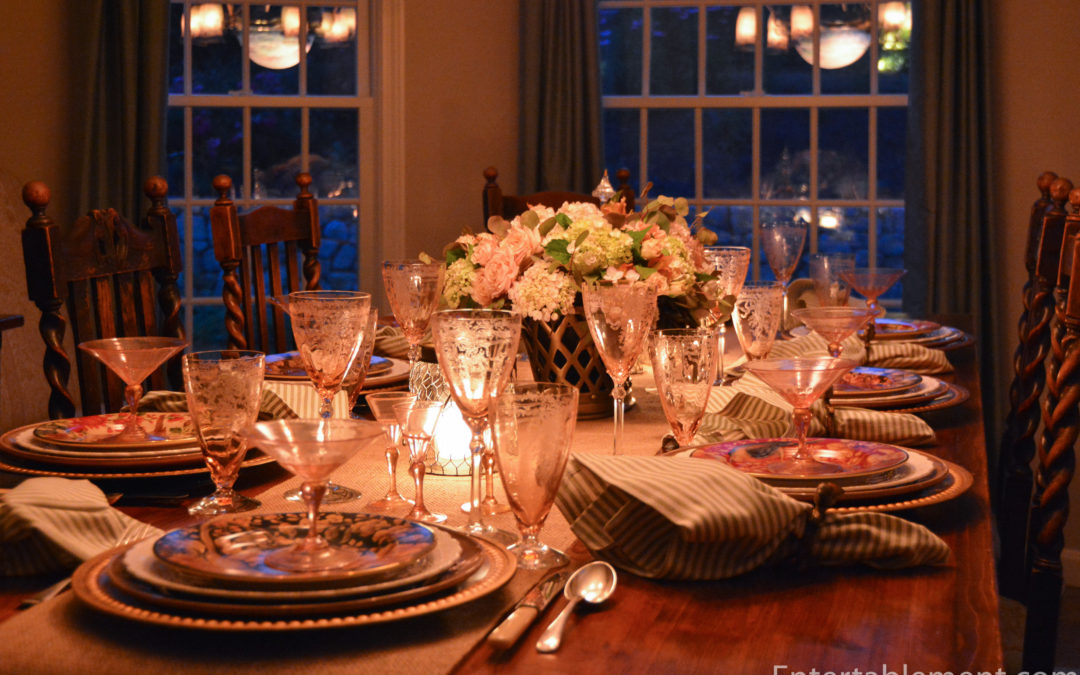 As the days grow shorter and colder, we Northerners start burrowing. Porch cushions come inside and outdoor furniture is stored for the winter, Fluffy duvets make their way back onto beds and winter throws are draped over comfy chairs, ready to be pulled up as we crack open the latest whodunit. This time of year I’ll light a real wood fire at the drop of a hat, coaxing the sulky chimney back into action after its summer sojourn and blithely ignoring the trail of messy wood chips. 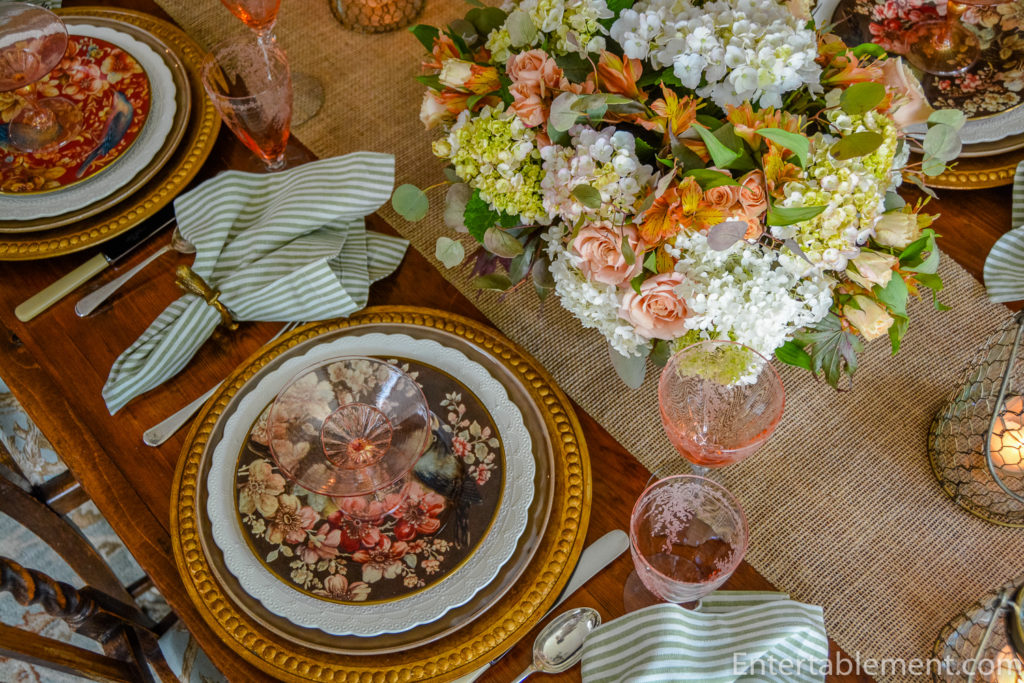 Dining habits shift, too. We crave comfort food and warmer coloured table settings. No more snagging flowers from the garden to set a quick table. More planning is involved if I want a floral centrepiece; now flowers are added to the grocery list. But with darkness falling a lot earlier, a scattering of tea lights goes a long way to setting a cosy table with minimal effort. 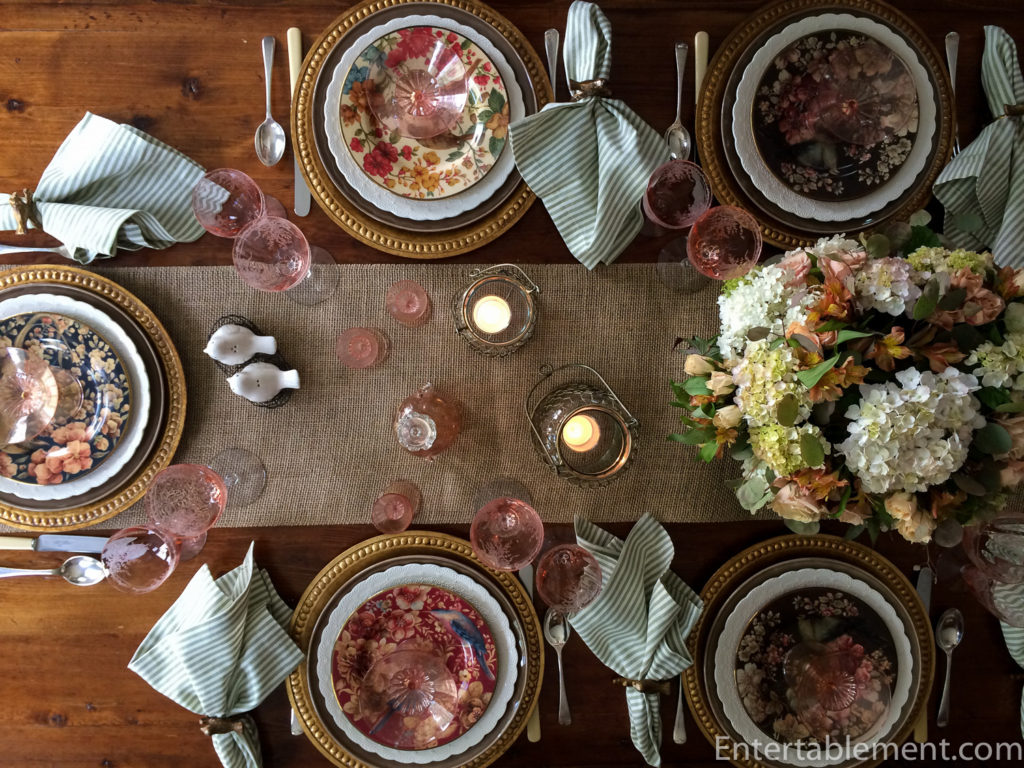 Of course, a set of salad plates in warm colours is always a great place to start, too! These are a collaboration between Pottery Barn and Indian fashion designer Sabyasachi Mukherjee, in a collection from the fall of 2016. 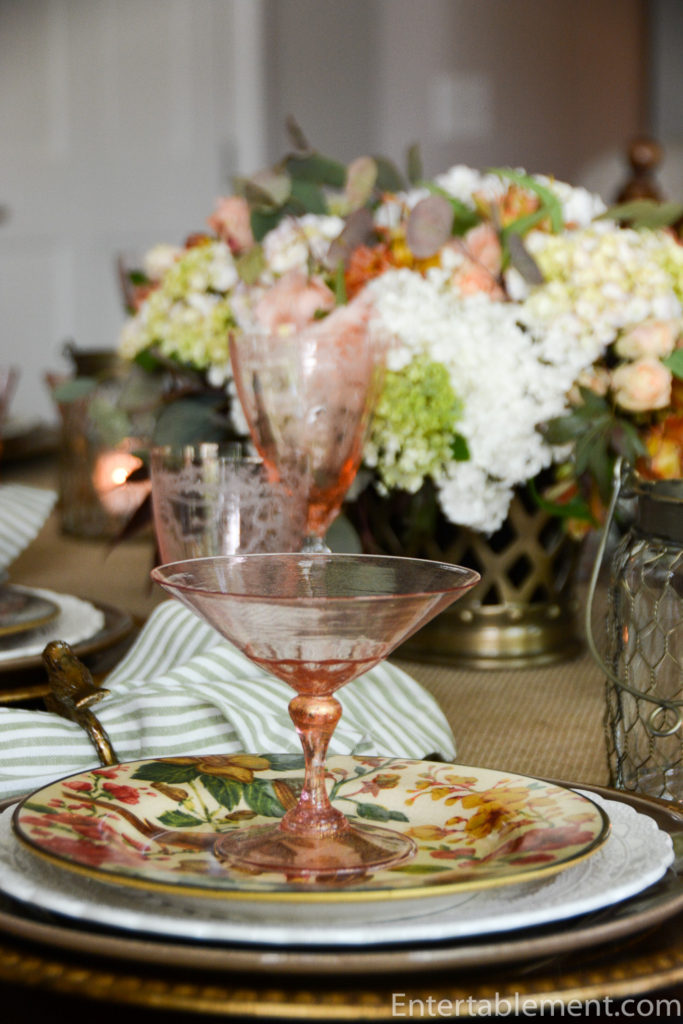 Wikipedia tells us that Sabyasachi  “used dark jewelled colours with muted shades accentuated with subtle texturing and indigenous embroidery. He is the only Indian designer to be a part of all three leading fashion weeks: New York, Milan and London. Sabyasachi believes that the unique positioning of Indian designers is due to the exclusivity of his homeland with its rich history and culture. He believes that Indian designers bring a flavour to the west that is no longer perceived as only exotic but also a rich blend of individuality and sensitivity.” 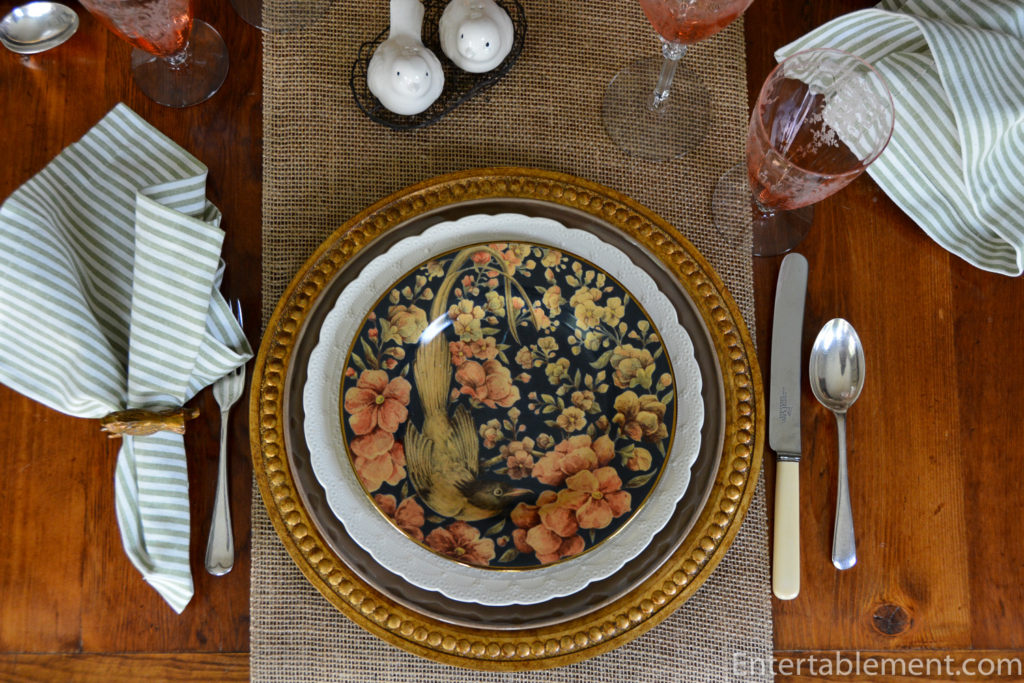 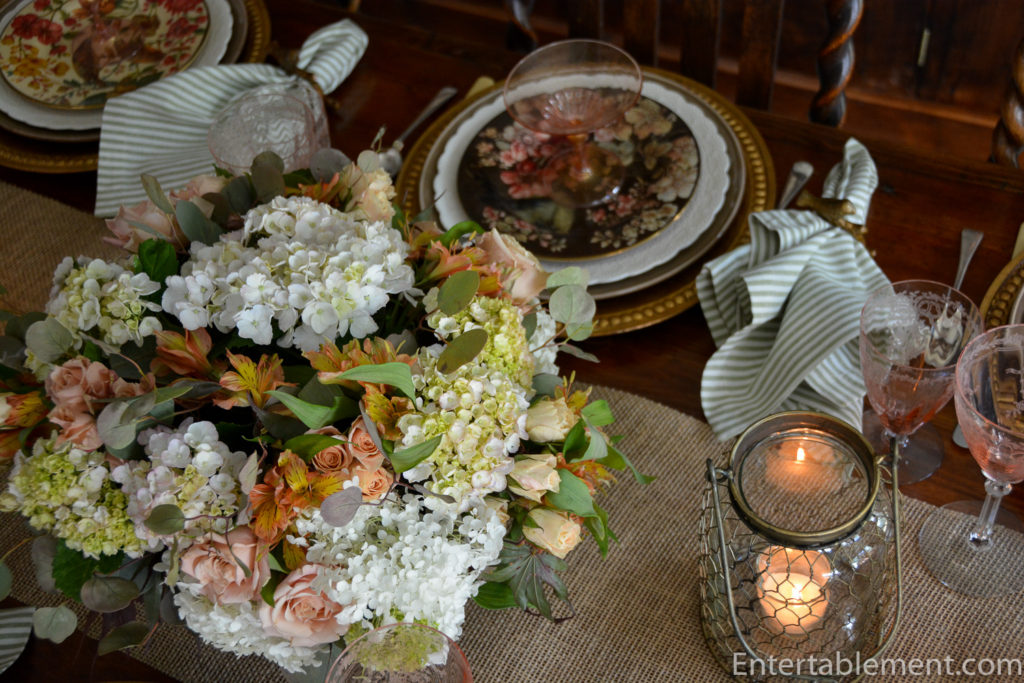 I was intrigued by the unusual combination of colours on the four plates. One doesn’t often see red and peach in the same collection, but it works! 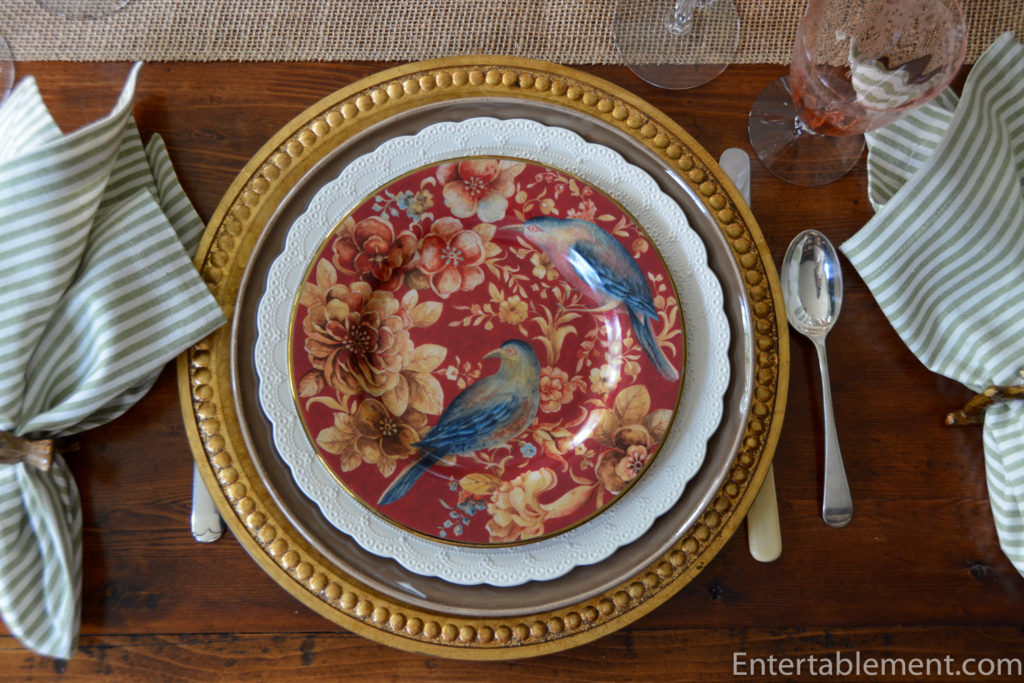 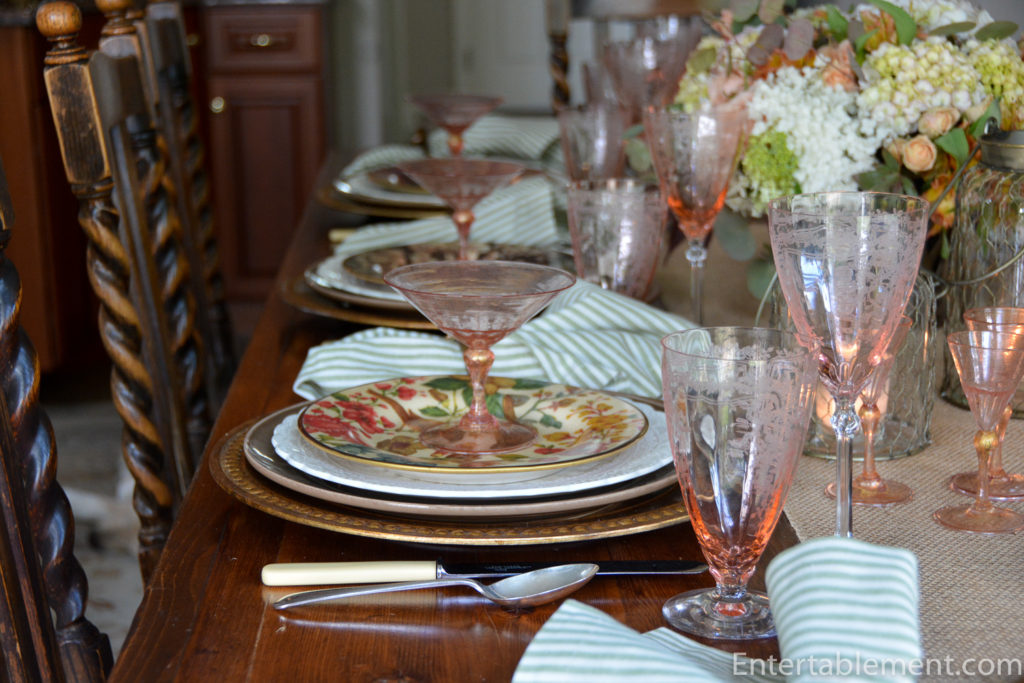 There is both a chocolate brown and a black plate. 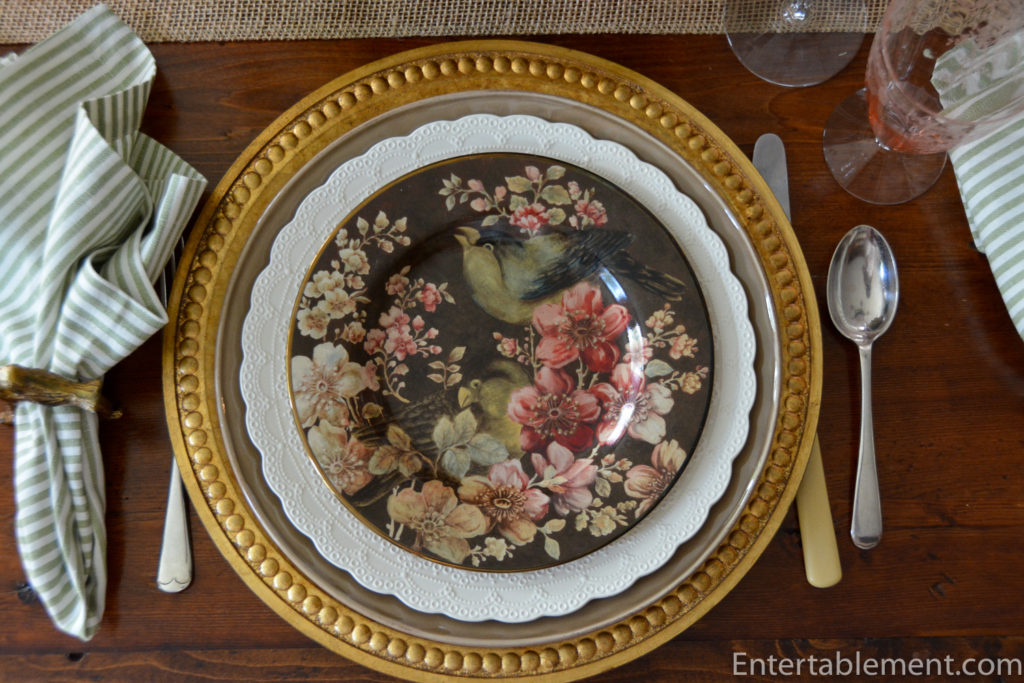 The final plate has a creamy background and features vibrantly coloured red and gold flowers. These are the Floral series; there was also a multi-coloured toile version called Sabyasachi Animal, but it didn’t appeal to me as much. This set came via a patient e-Bay watch; I missed them in stores, originally. The dinner plates are vintage Jewel by Spode. They sit atop mushroom Cambria dinner plates from Pottery Barn, years ago. 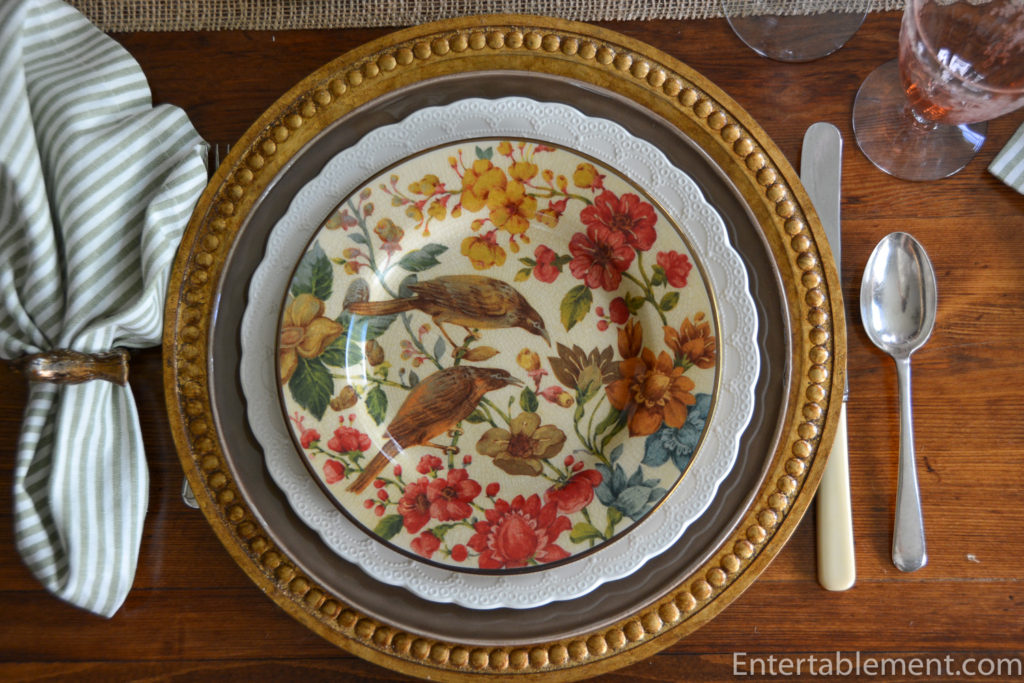 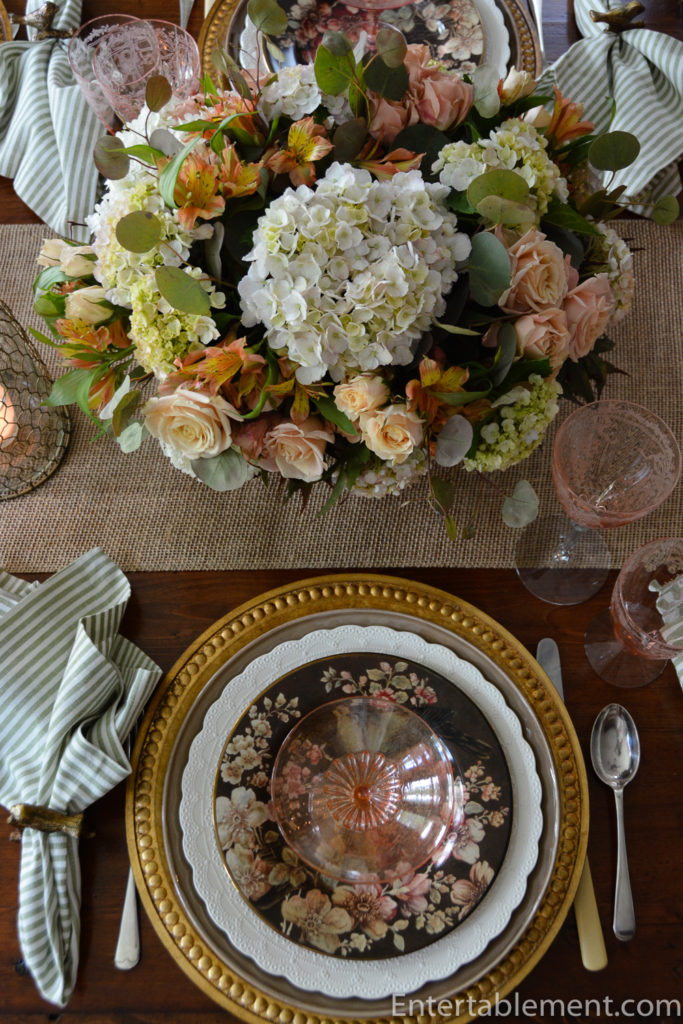 Antique Venetian glass champagne cups and June Pink Depression glasses by Fostoria drew on the warm tones of the floral and bird pattern. 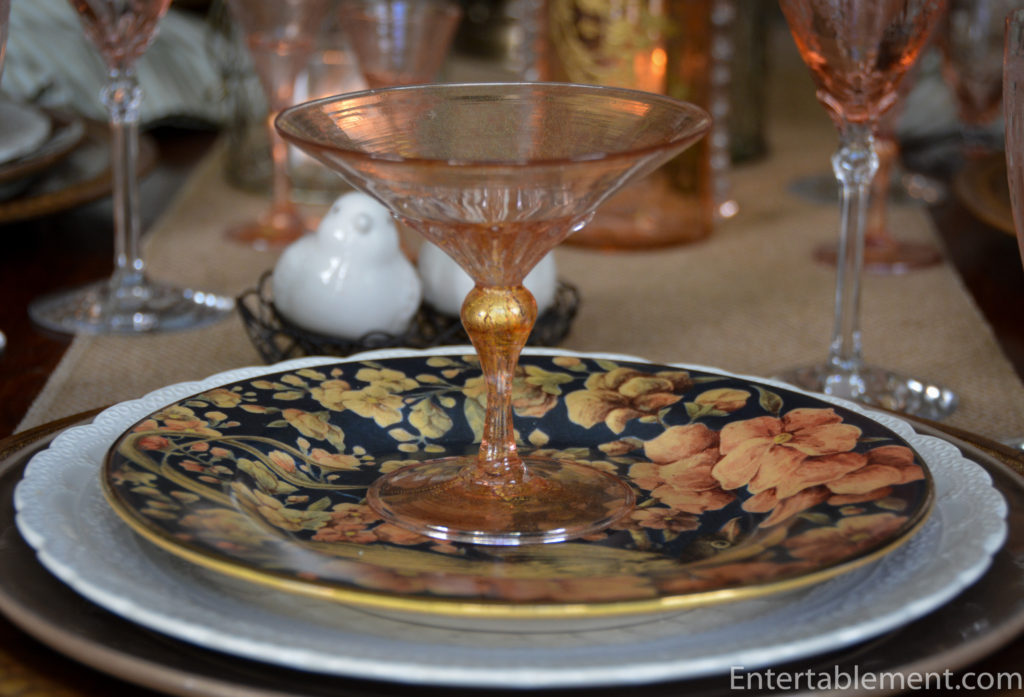 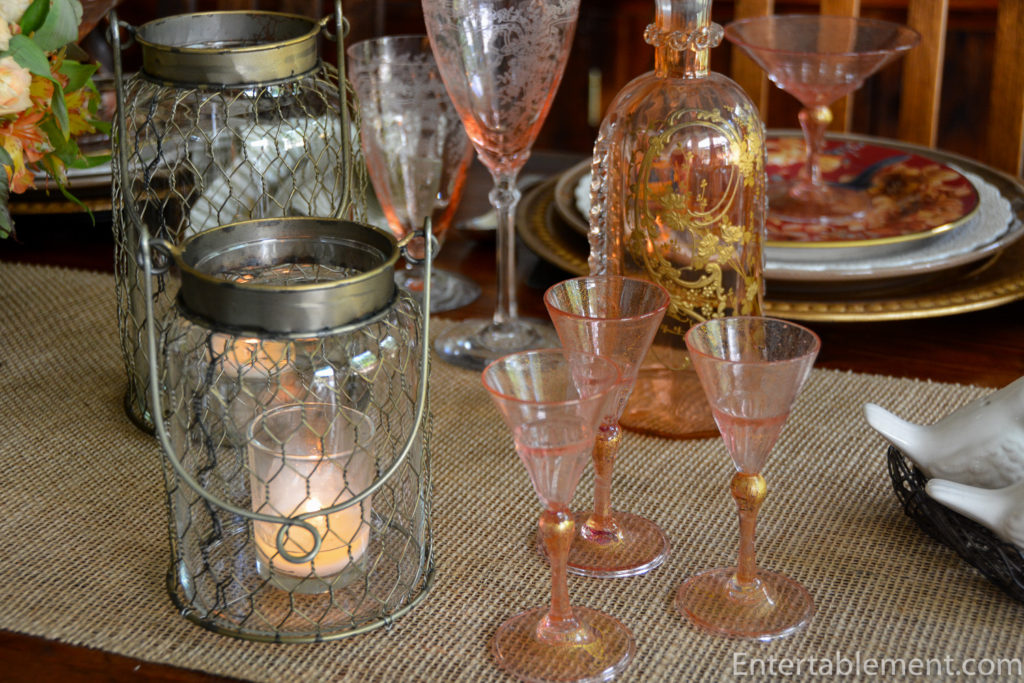 The gold-toned bird napkin rings echoed the colour of the charger plates and the chicken-wire covered lanterns from Harvest of Barnstable. 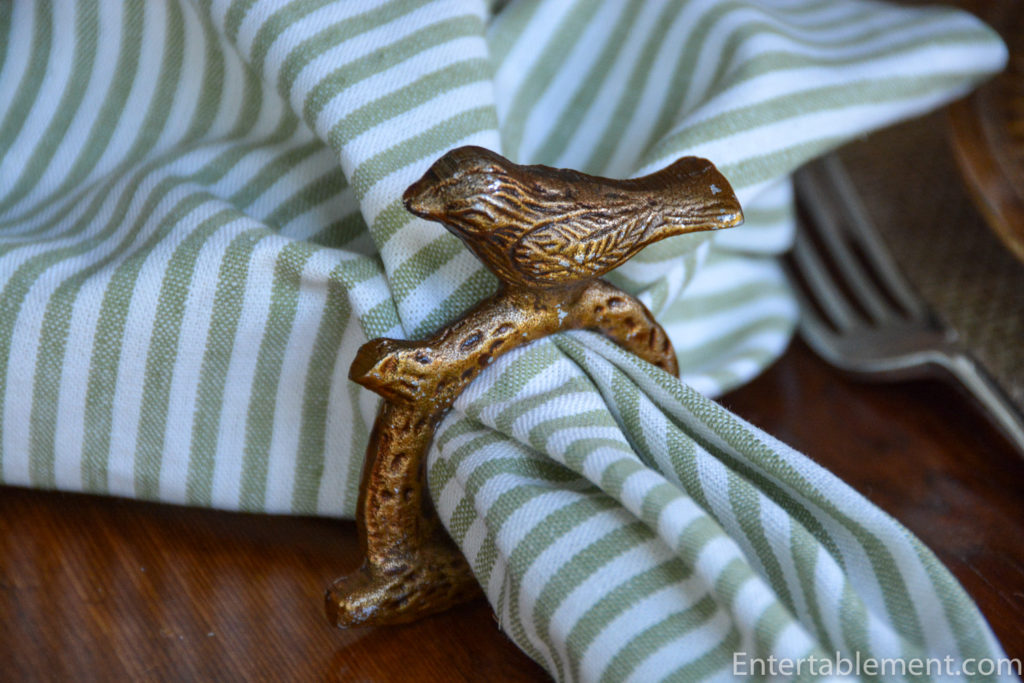 Couldn’t resist these little birds in wire nests from Pier 1. Hi there! You lookin’ at me? 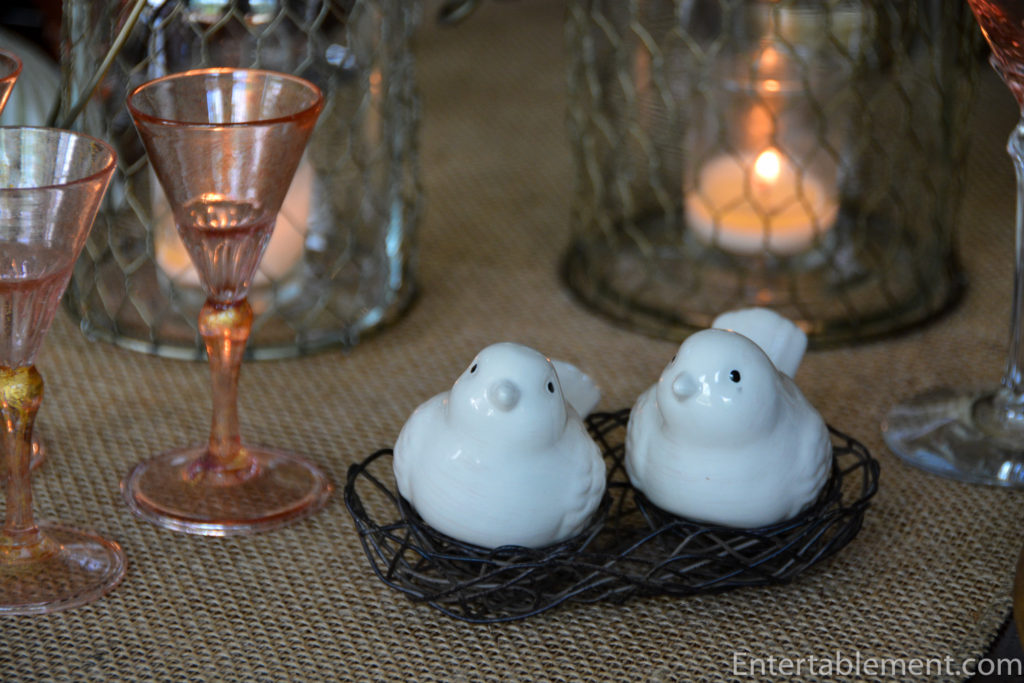 The lattice cachepot from Ballard Designs has proved very versatile. Its size and shape allow an exuberant floral display of roses, hydrangea, alstroemeria and eucalyptus; its removable liner makes it a snap to clean. 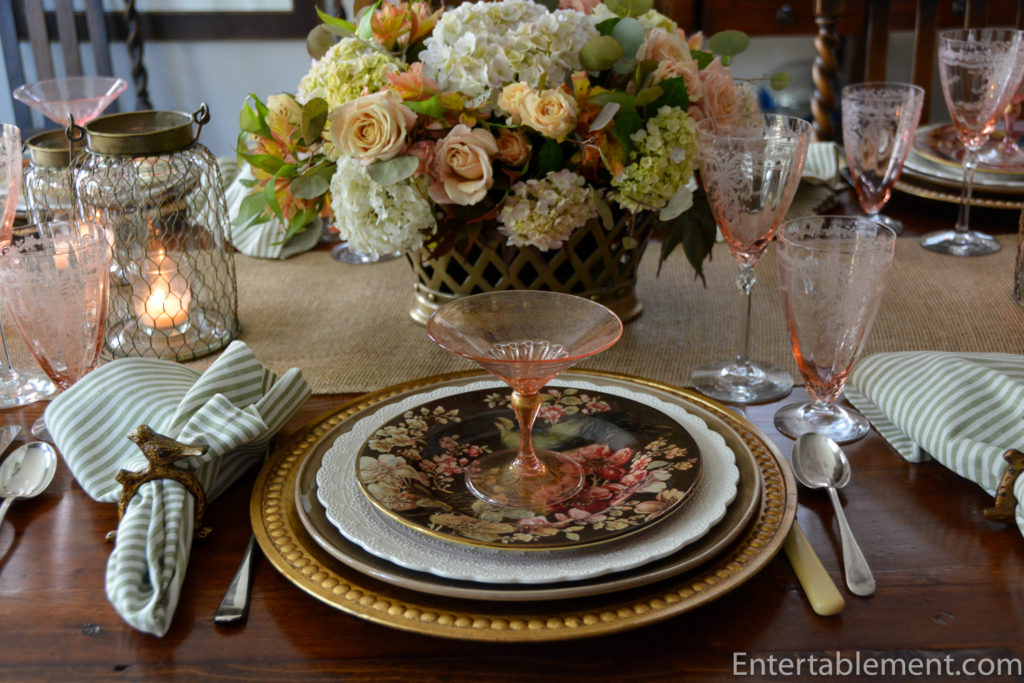 Not a bad way to transition from carefree-outdoor-summer-dining back into the nest! 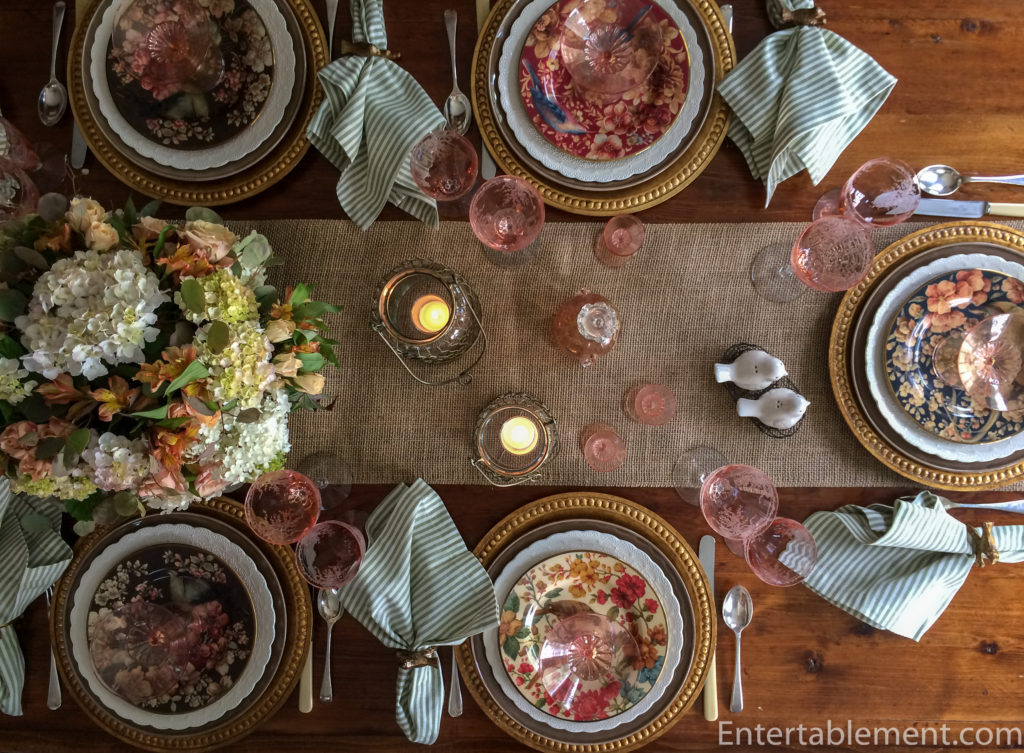 There is something very soothing about candlelight. Probably some primal urge to draw near to fire as the night sets in. 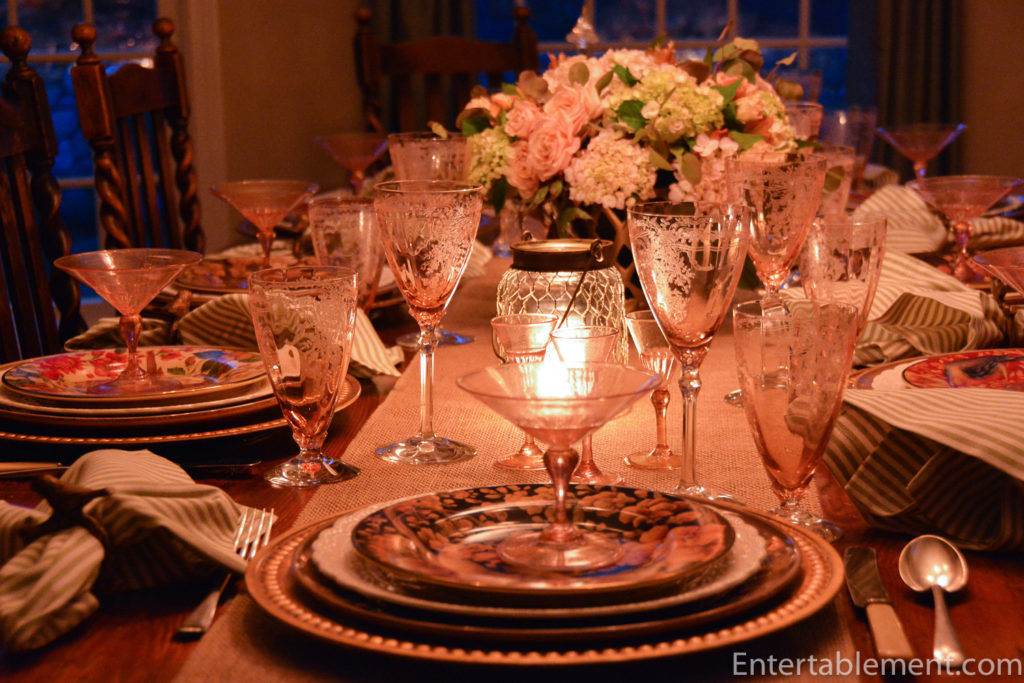 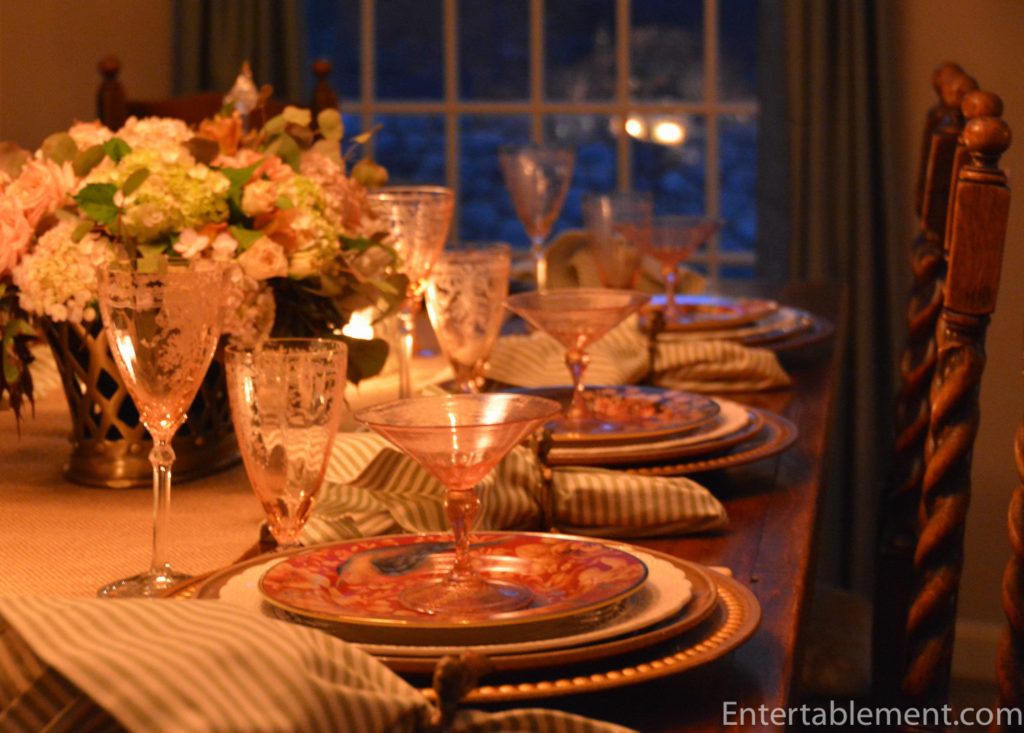 Speaking of night setting in, it’ll be a lot earlier after this weekend, when we “fall back”. I’ll be relieved that it’s no longer pitch black at 7:30 am, however. My morning dog-walking routine was getting pushed later and later; I don’t need any additional excuse to procrastinate. The chilly mornings are deterrent enough. 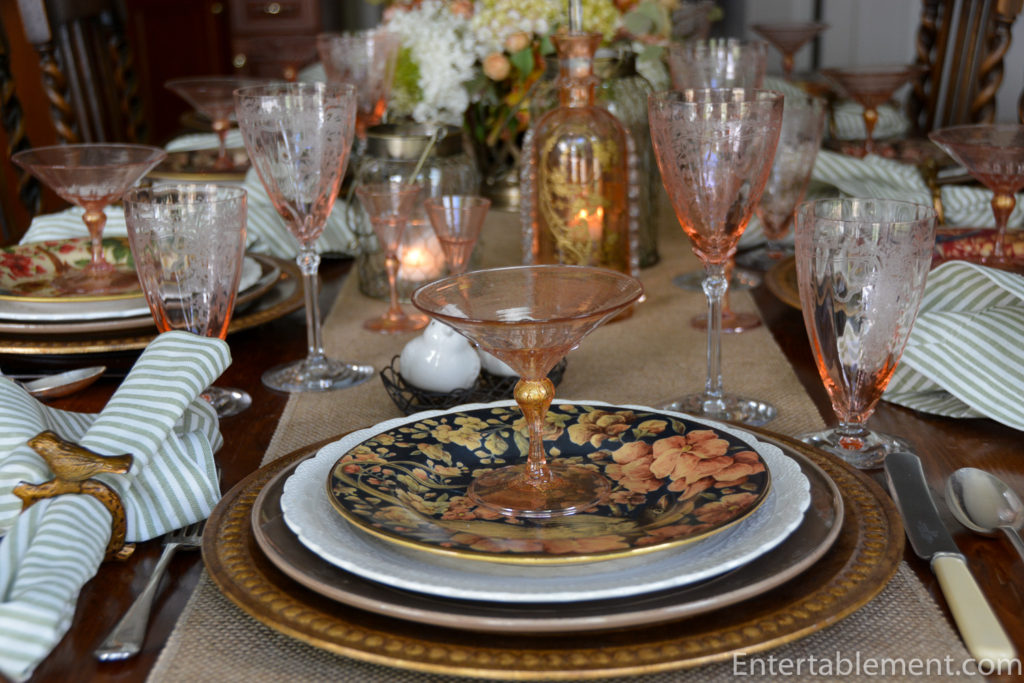 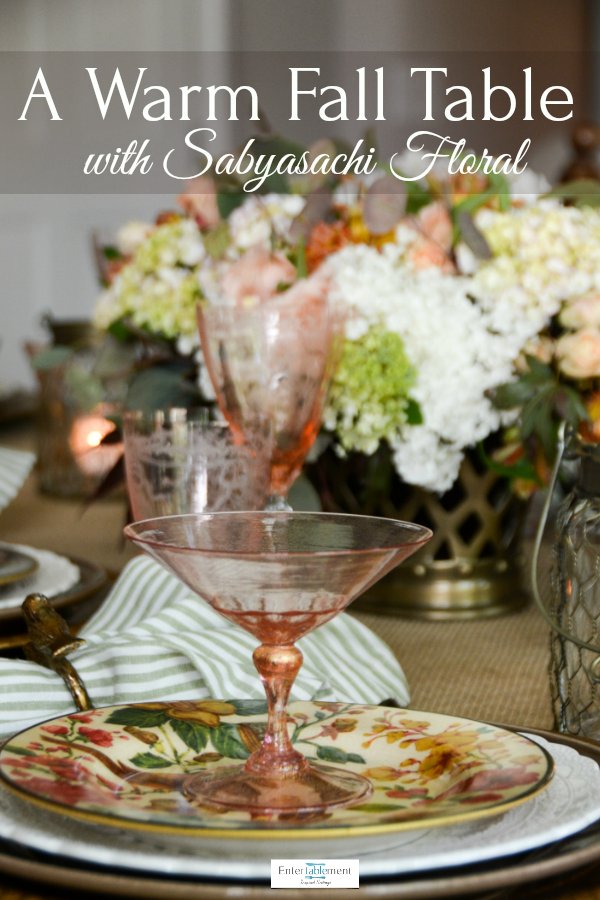