Ringing in 2019 with a New Year’s Eve Dinner 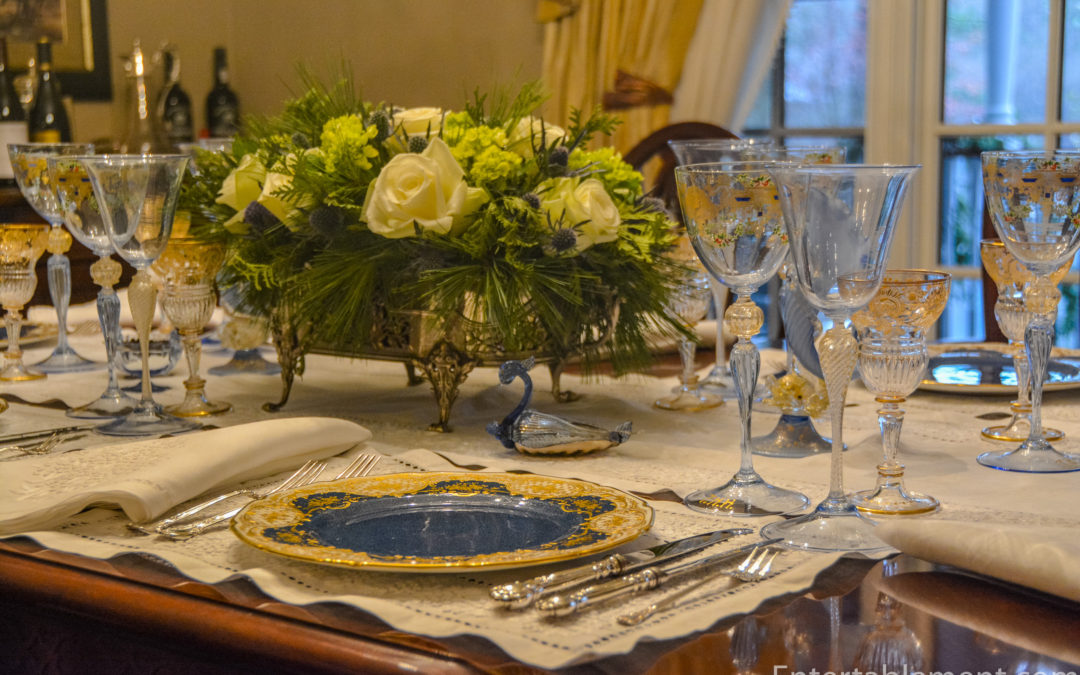 Happy New Year, everyone! I hope you all enjoyed a festive celebration on New Year’s Eve, whether you were out on the town or quietly at home. 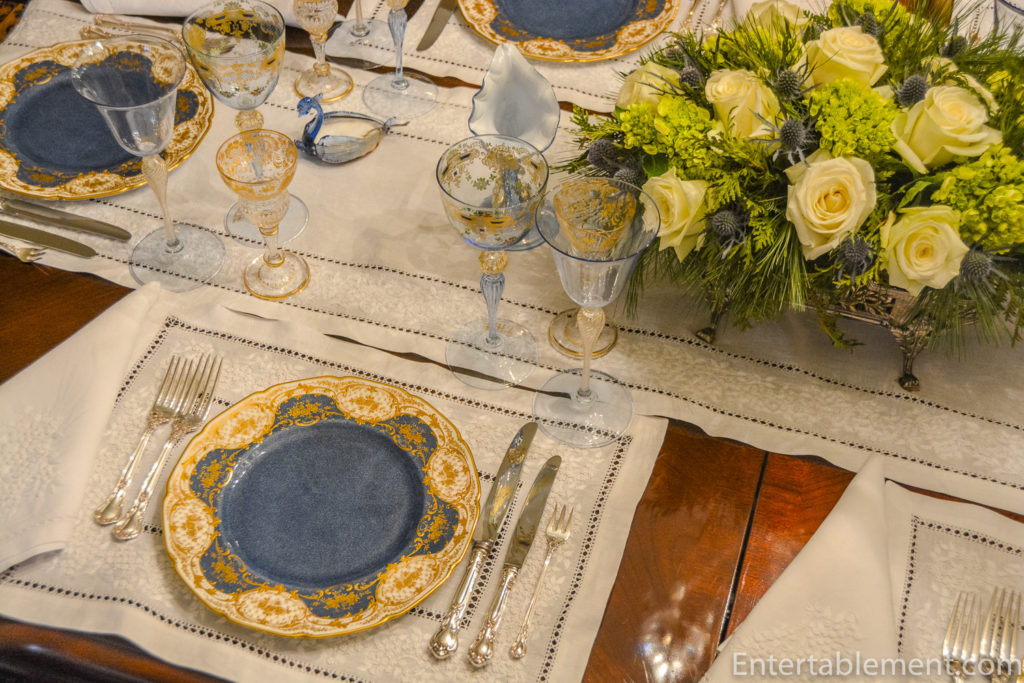 We hosted a small dinner party with close friends, and I took the opportunity to pull out some “ballgown” tableware. The first order of business, after planning the menu, was to remove a leaf from the dining room table so we could enjoy a cosier arrangement. 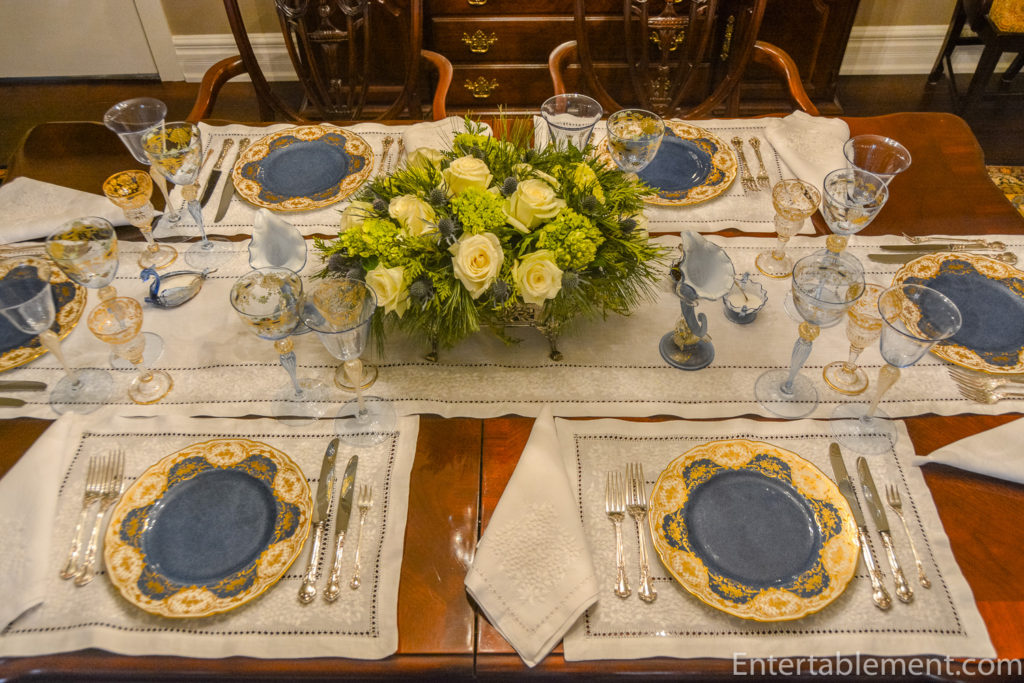 That done, I decided on my French or Powder Blue plates and Venetian glassware (most of the antique glassware and china on this table is from Elise Abrams). I thought it would be a fresh change from the greens and reds of Christmas with a little more colour than just gold & white. 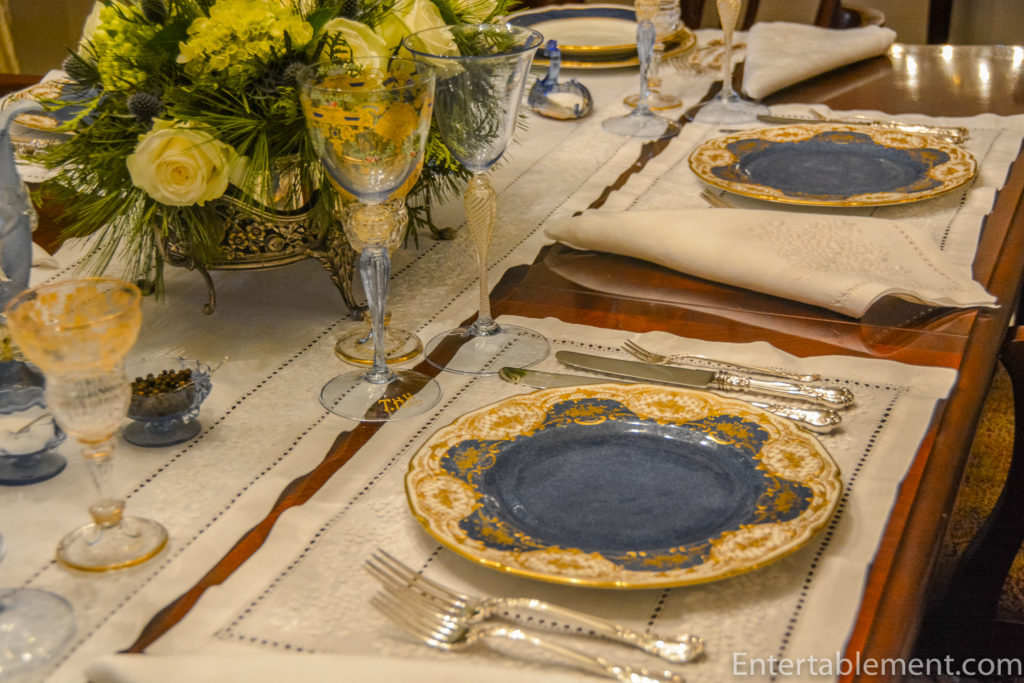 The service plates have a rich gold embellishment on the border. They’re from the Gilded Age and produced by Royal Doulton. 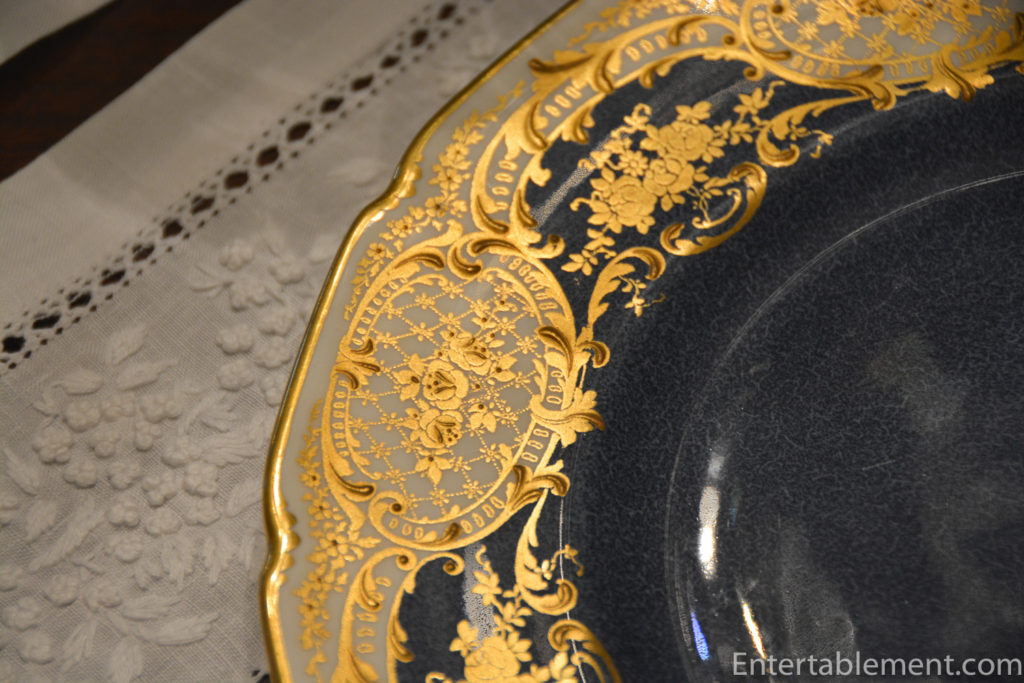 You can see the delicately raised paste and the fine dots (called jeweling) in this shot. 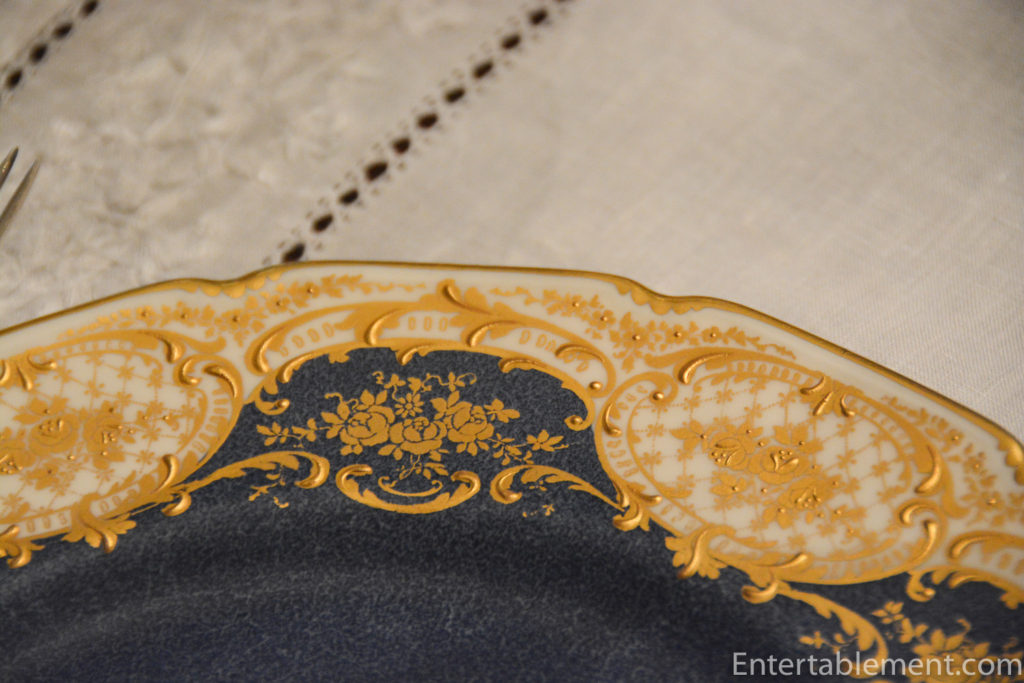 For the salad course, I used a coordinating plate of the same vintage, though this one is by Spode. 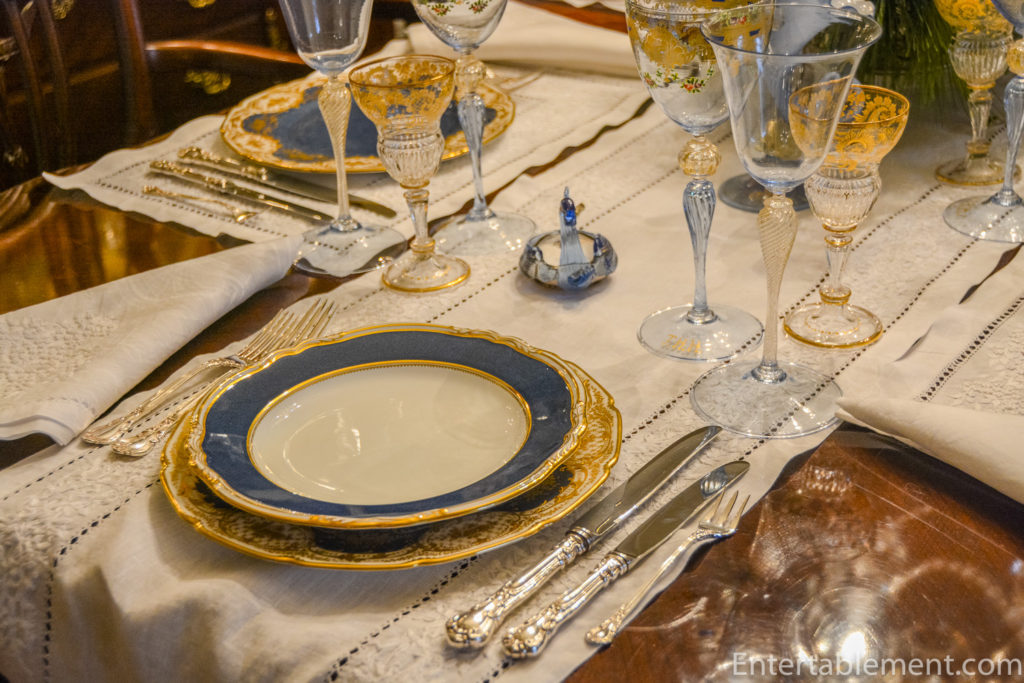 For the main course, I used a fairly modern plate, also by Royal Doulton, which I picked up from Replacements years ago to coordinate with all my antique china. It’s Royal Gold by Royal Doulton. I’ve got the soup cups & saucers, the bread & butter plates and the dinner plates. When using antique china, it’s best to avoid using utensils on the heavily gilded, fully coloured and/or hand-painted pieces. By all means, use them as service plates (like the first piece) with a salad plate or soup cup on top, then remove them. 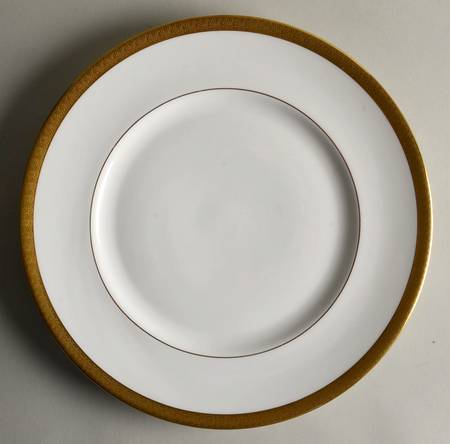 The goblets are both antique Venetian Glass, one plain and one with gilding and jewelling. 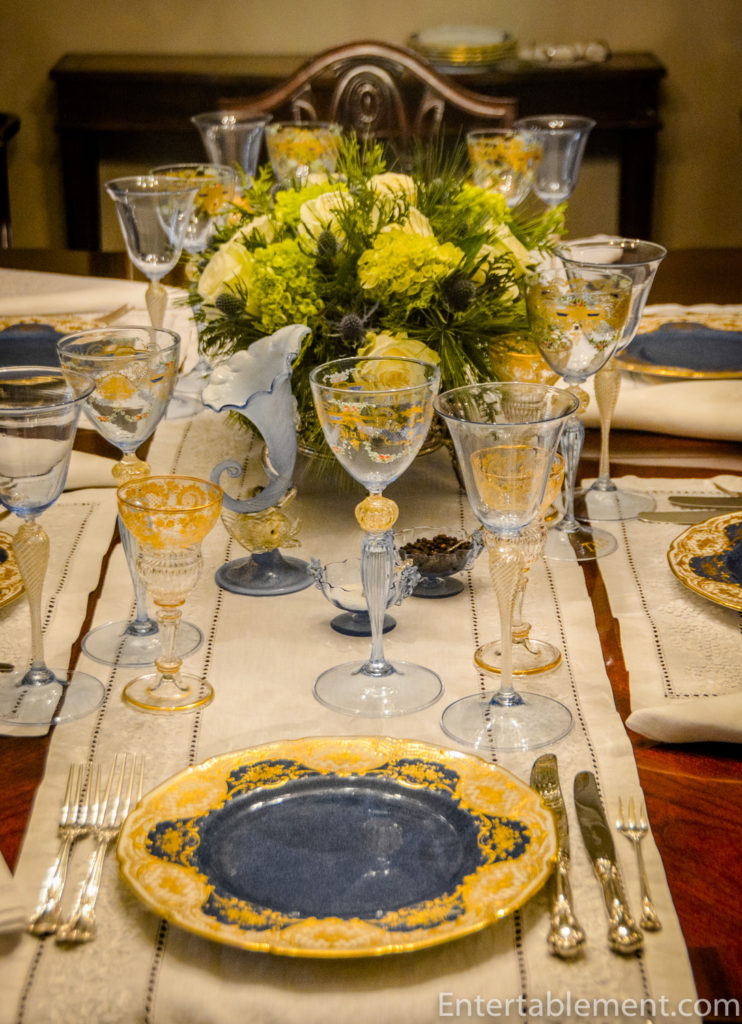 I used the embellished glass for water and the plain one for wine. 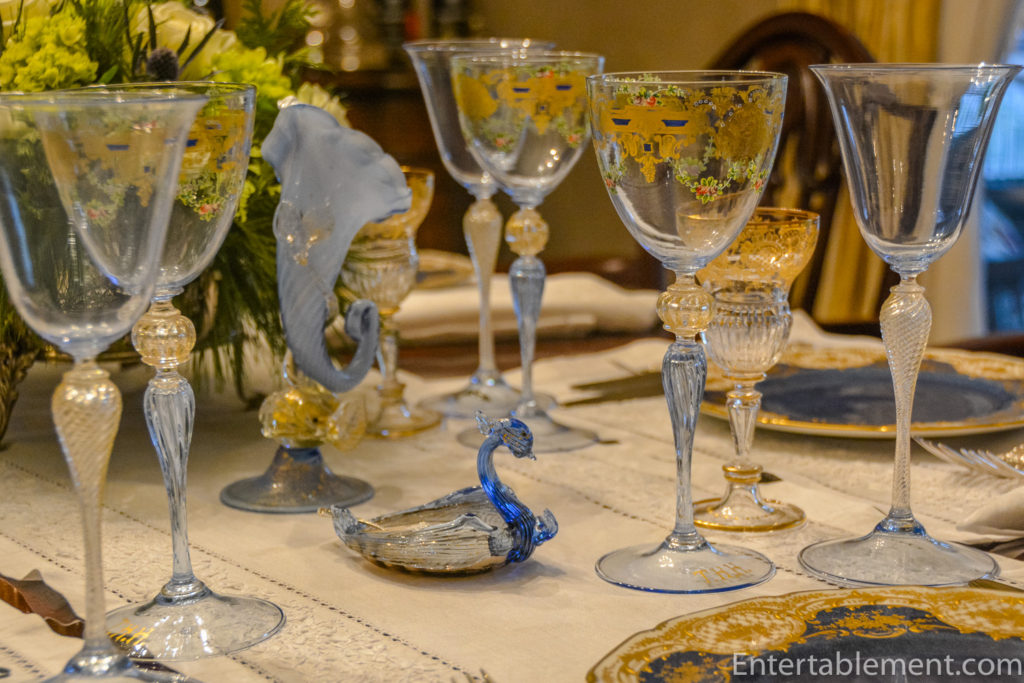 I have only nine of this one, five from one set and four from another; they’re slightly different heights, but it’s not noticeable on a table. 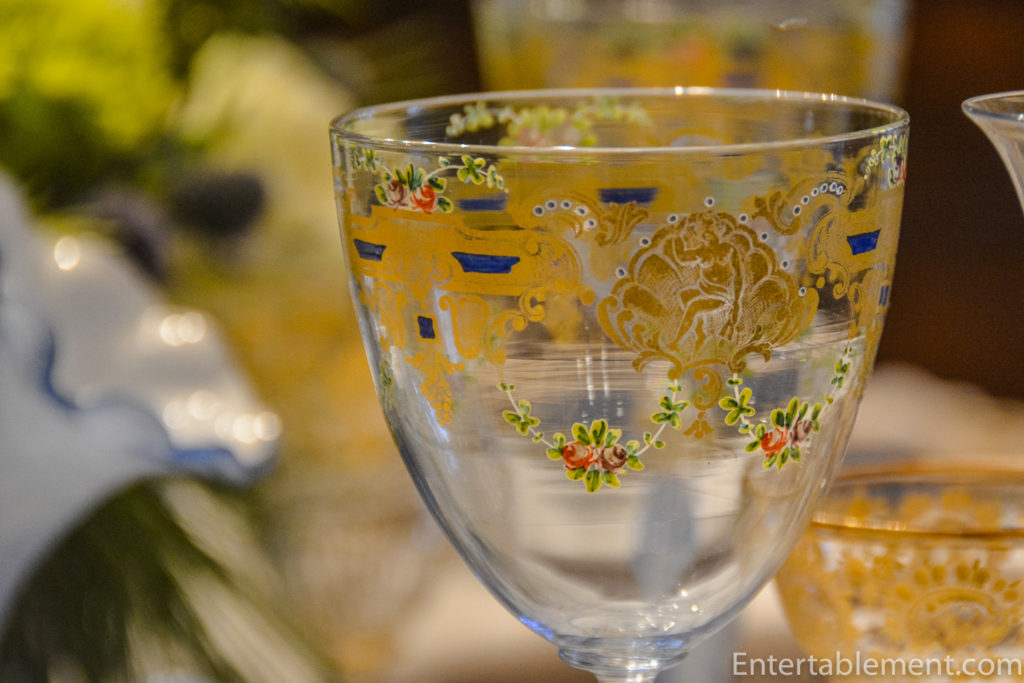 I was lucky enough to find some coordinating open salts: two small dolphins…

… and a gracefully gliding swan. 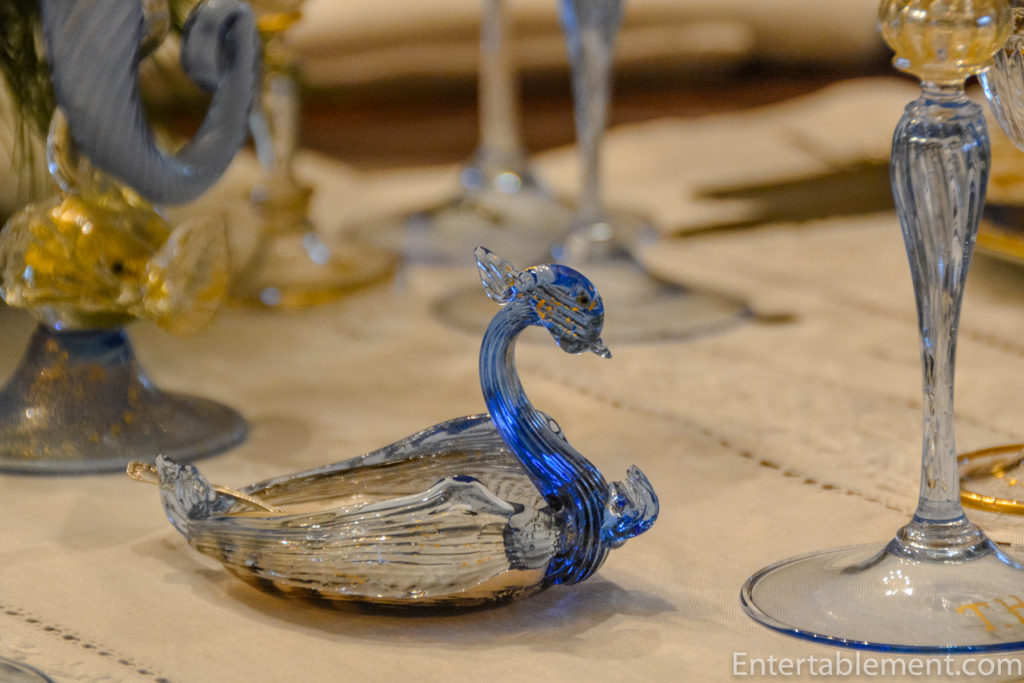 Oh yes – and a couple of dolphin vases, though I left them empty on this occasion. The small clear gilded acorn-shaped glass at the back is an antique Moser glass that we use for Port, though it may originally have been a claret glass. Wine glasses were much smaller back then. 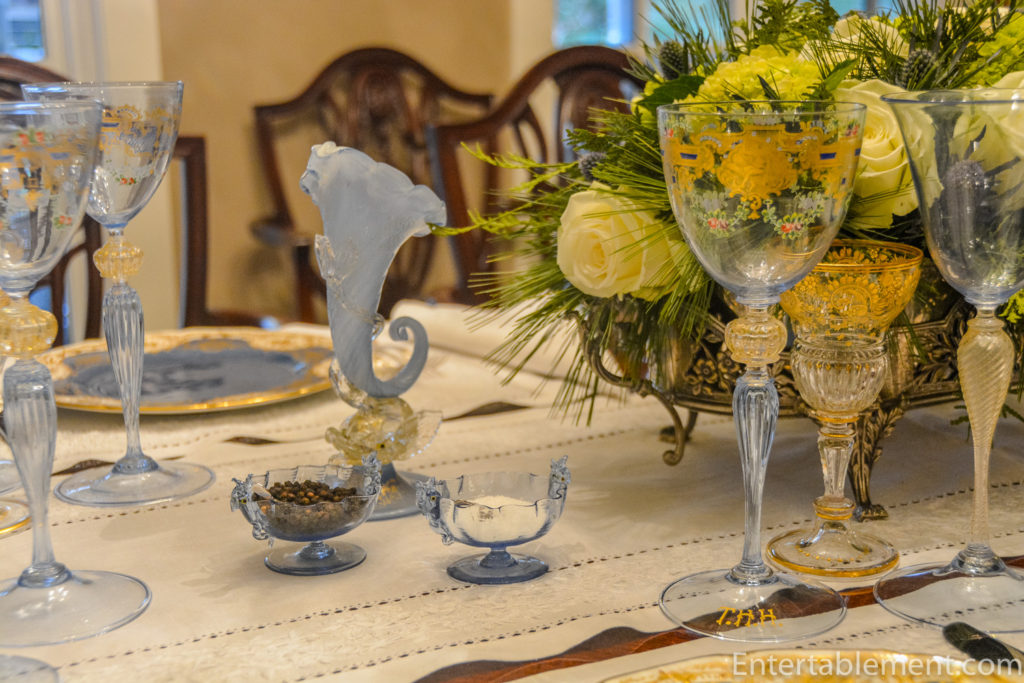 I decided on a fairly simple centrepiece with pine and cedar branches plucked from outside and white roses, immature white hydrangeas (to get the fresh green colour) and sea holly, which looks like Scottish Thistles but isn’t, from the grocery store. I’ve tried growing sea holly and it’s one fussy plant. It’s a lovely cut flower but a scrawny, unattractive plant in a perennial border. 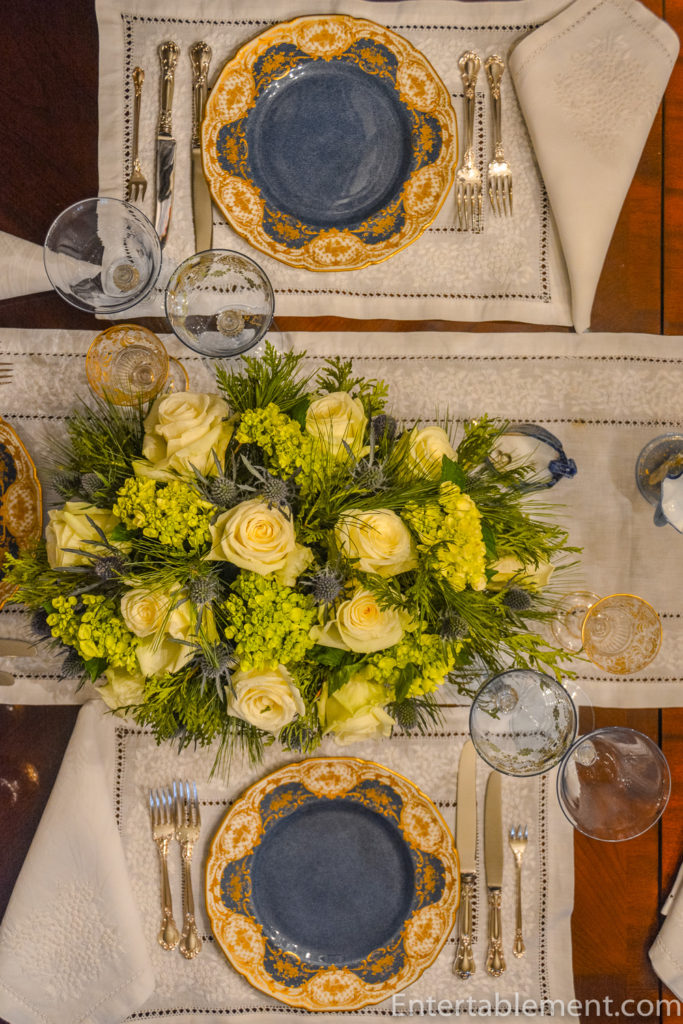 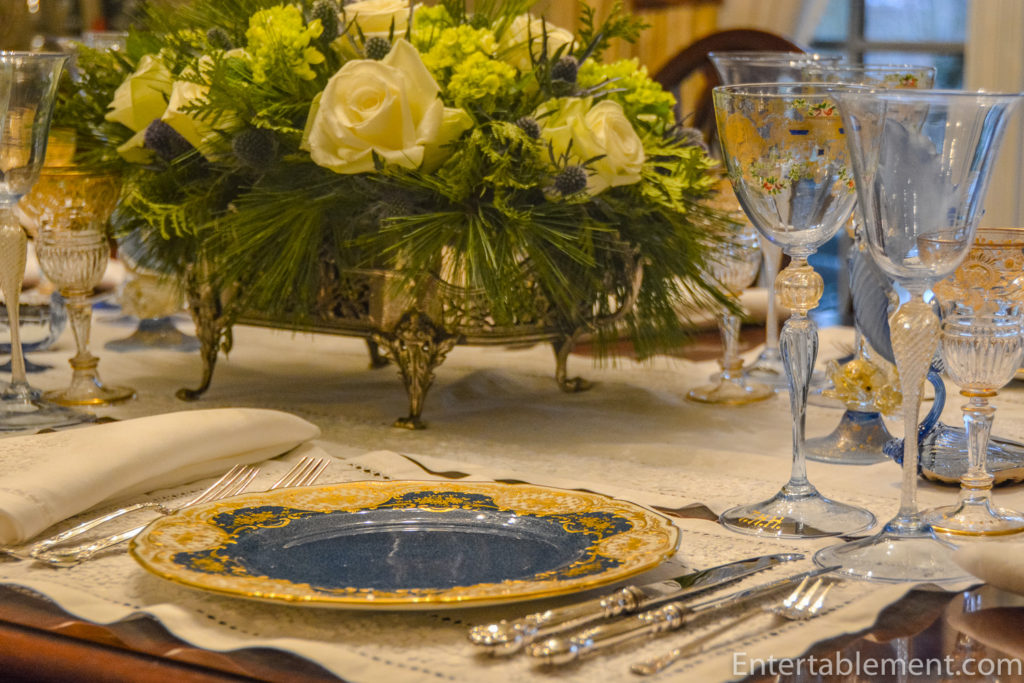 We deliberately set a measured pace for the evening, starting with canapes and champagne in the living room by the fire. For the canapes, I made pinwheels of Fennel, Spinach, Leeks and Pine nuts (recipe to follow as soon as I write it up), which I also served at a Scottish Tea for the family a day or so before. The recipe makes about four dozen and once the puff pastry is rolled up with the filling inside, it can be kept in the fridge for up to two days before being sliced and baked. 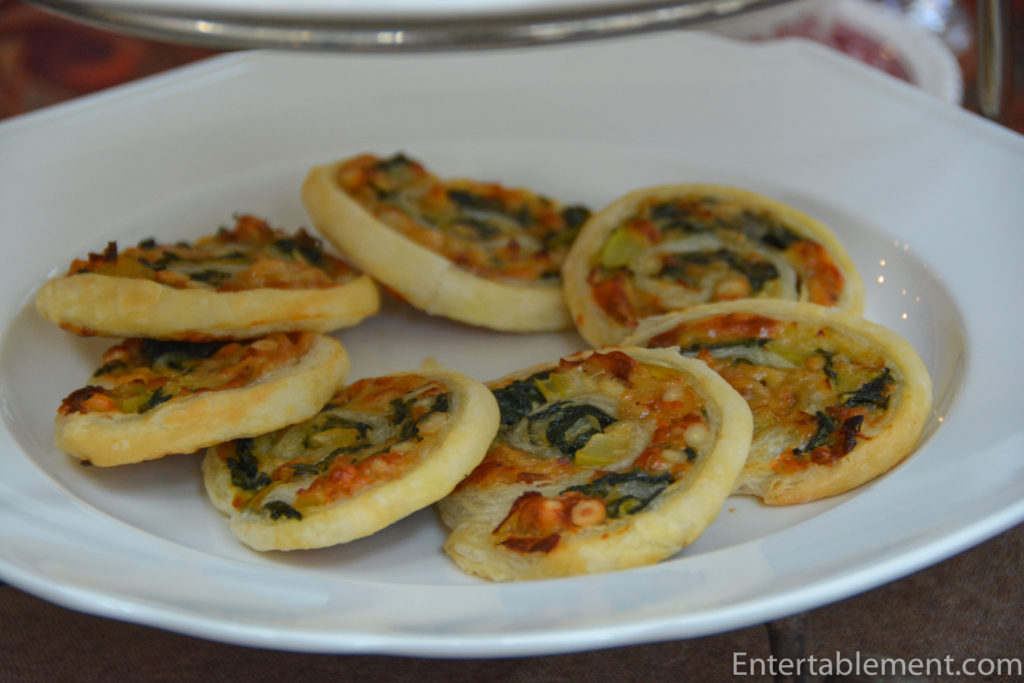 We then enjoyed oysters in the kitchen while I got the rest of the meal together. Glenn shucked four different varieties for us to try, and everyone added lemon, horseradish, or hot sauce as they desired. We then moved to the dining room for the rest of the meal, where the wine flowed and conversation sparkled. 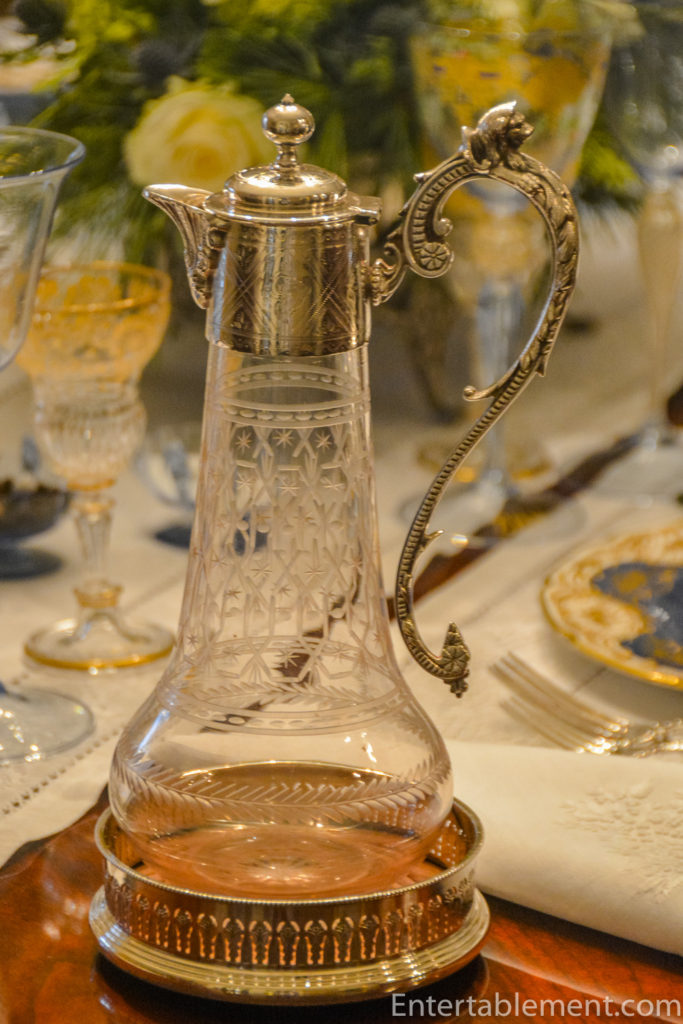 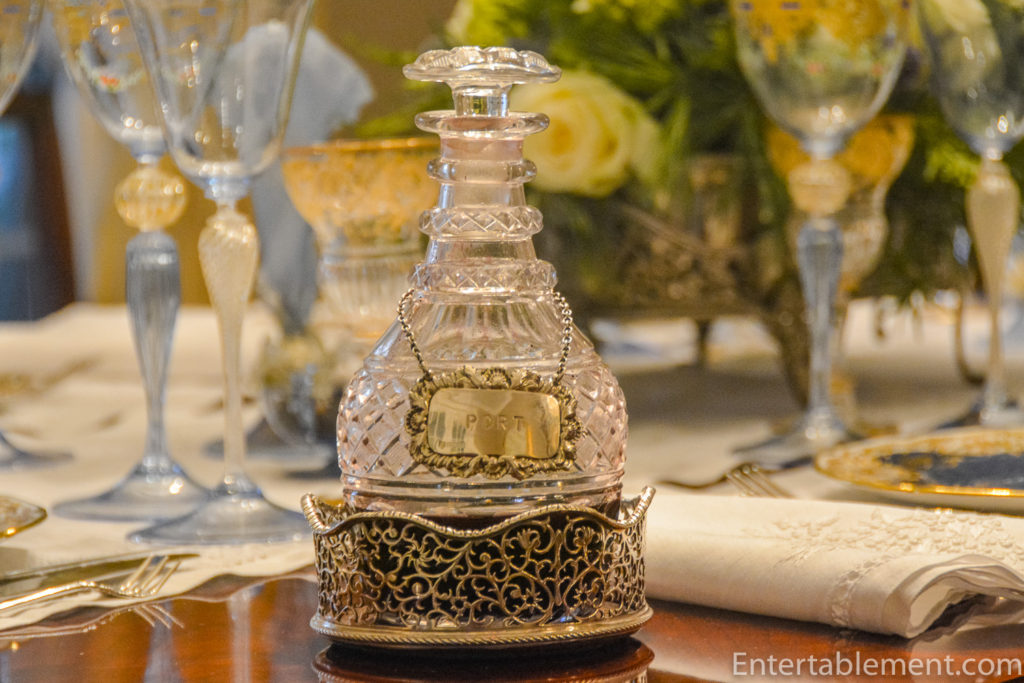 Dundee helped with all the preparations from his perch on the kitchen table. 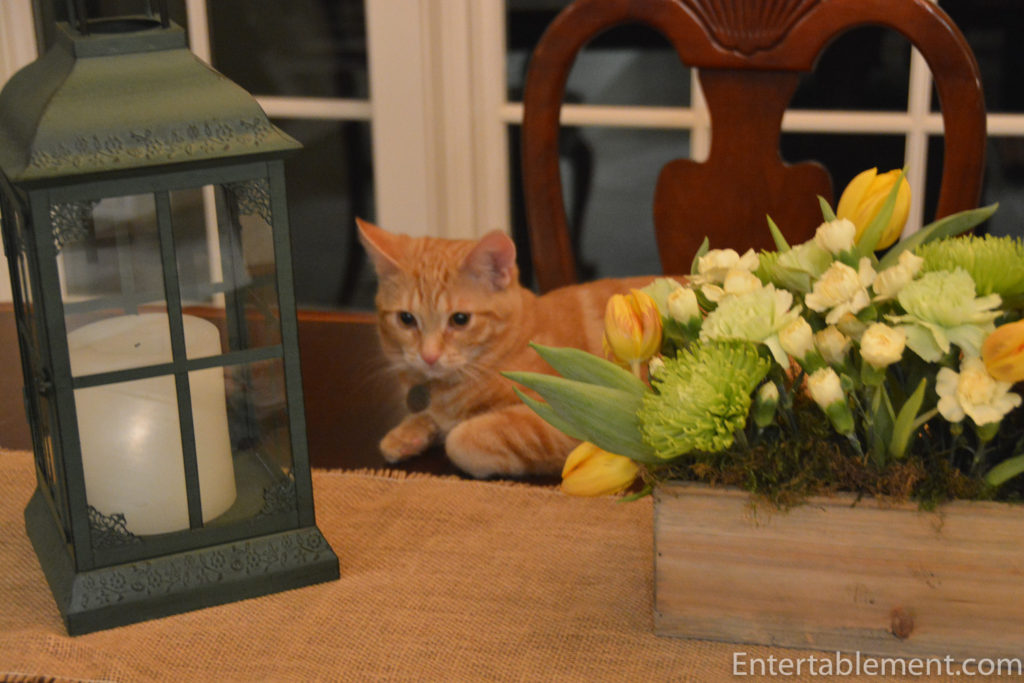 He became quite bored with the proceedings, as they didn’t involve food for him. He let me know in no uncertain terms. 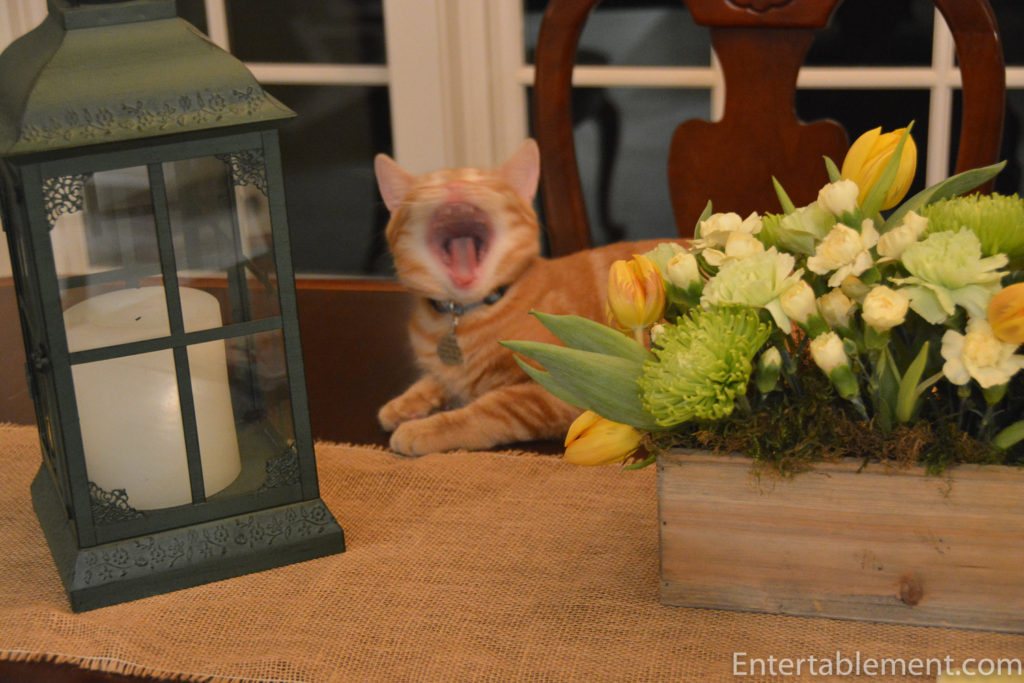 The full menu for the evening:

I’ll leave you with a few more shots of the table. 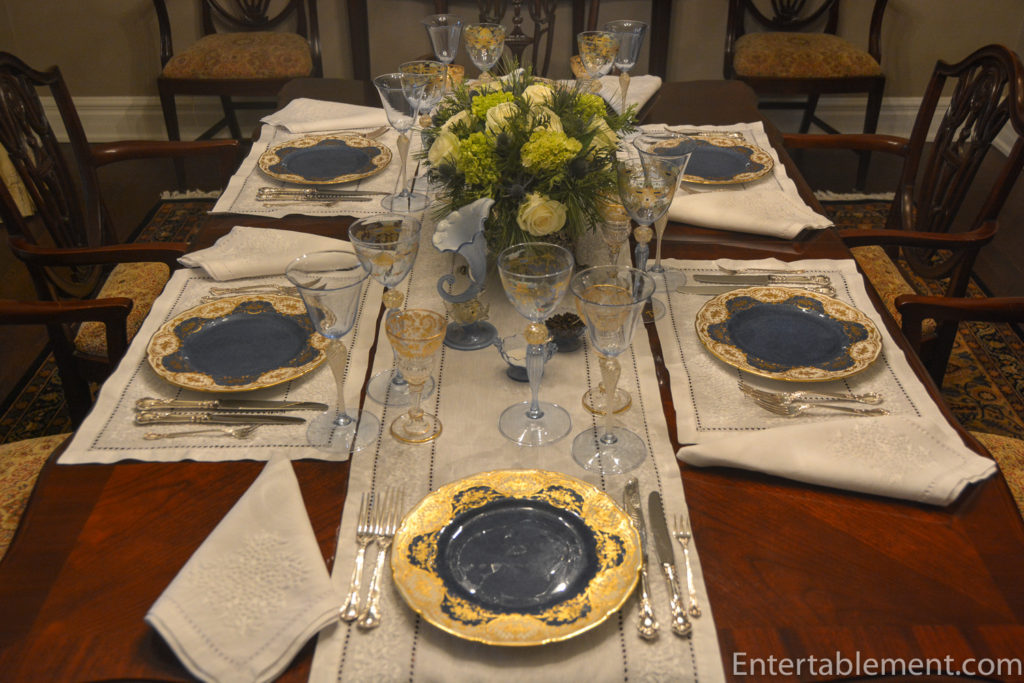 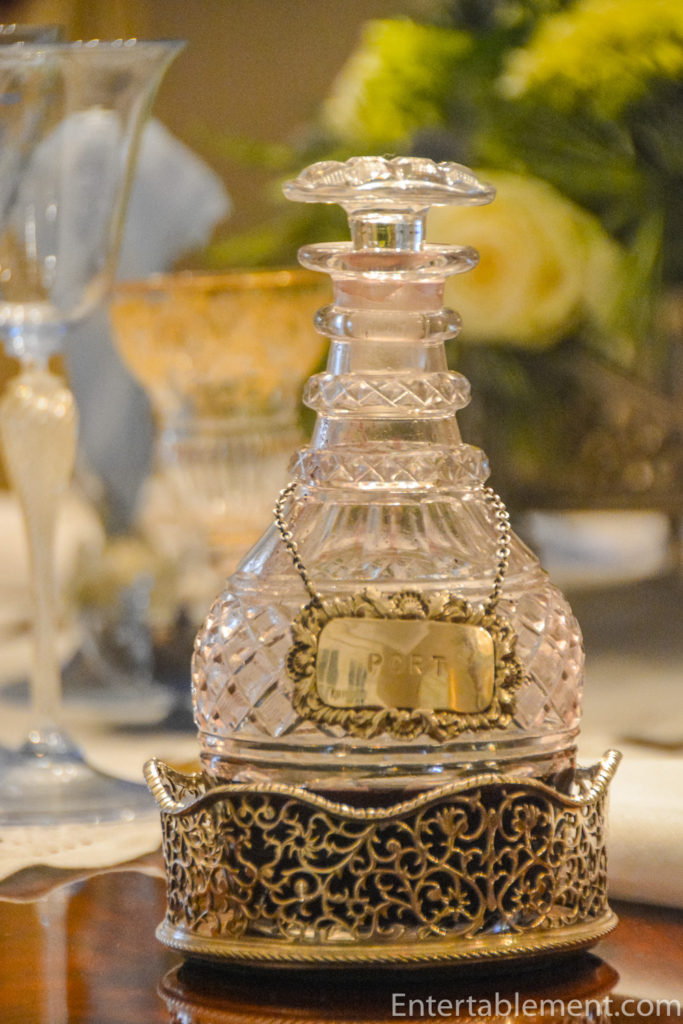 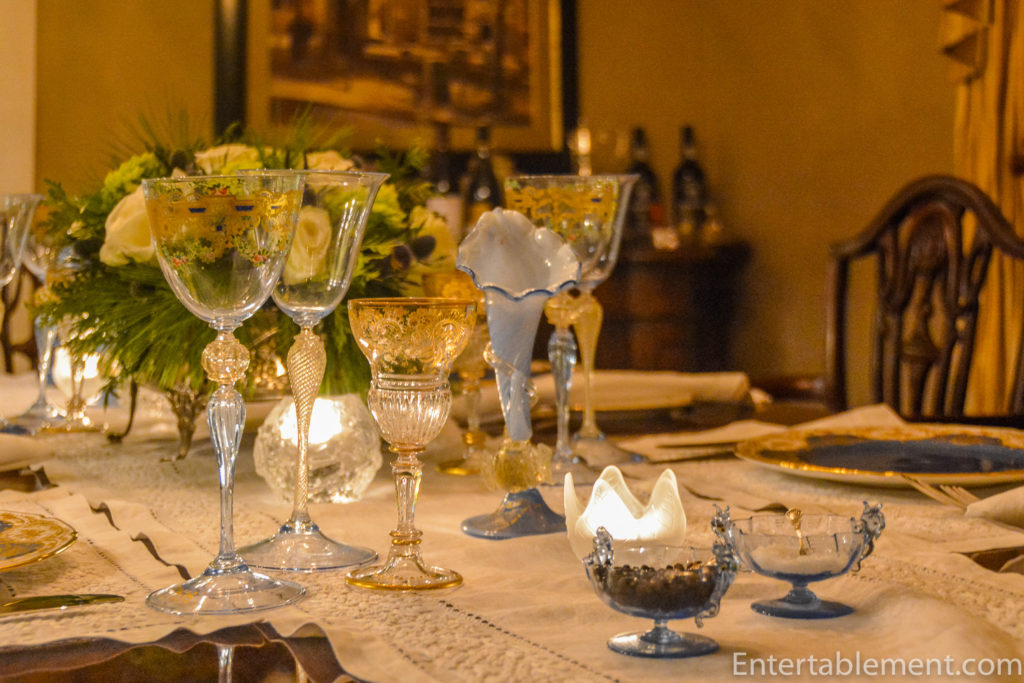 May I wish you all much happiness, robust health and prosperity for 2019, and look forward another year here at Entertablement filled with table settings, flowers, recipes and travel adventures.