A Scottish Themed Tea with Paisley and Spode 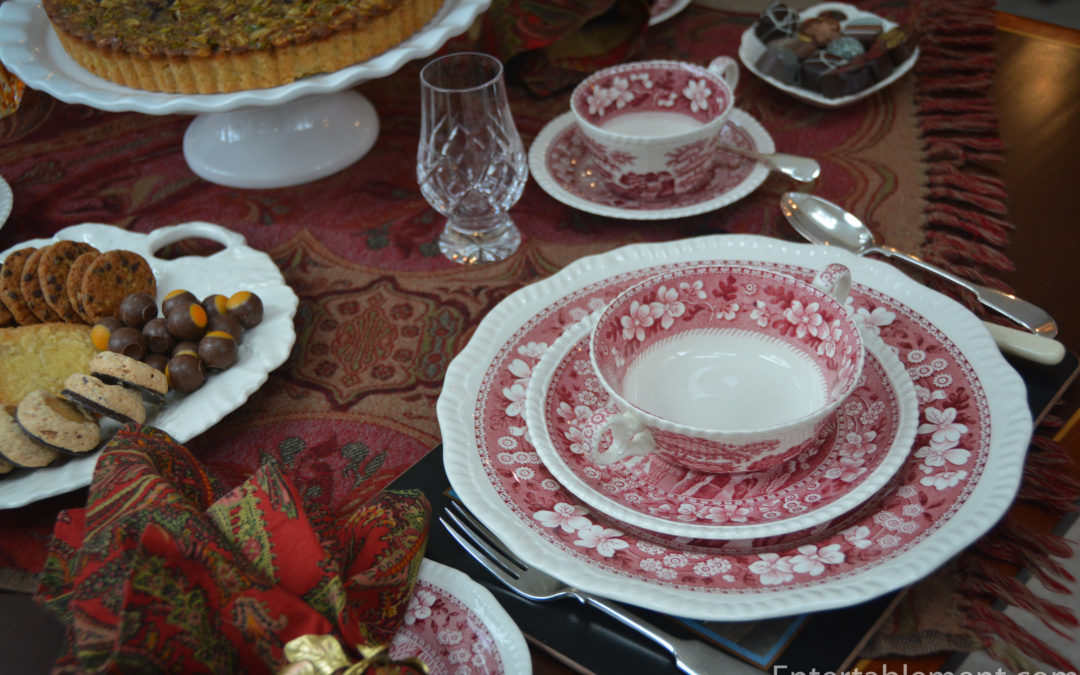 For the Scots, Hogmanay, or New Year, is a much bigger celebration than Christmas and is marked by much feasting, often over several days. I thought it would be fun to pay homage to this tradition with a Scottish themed tea. 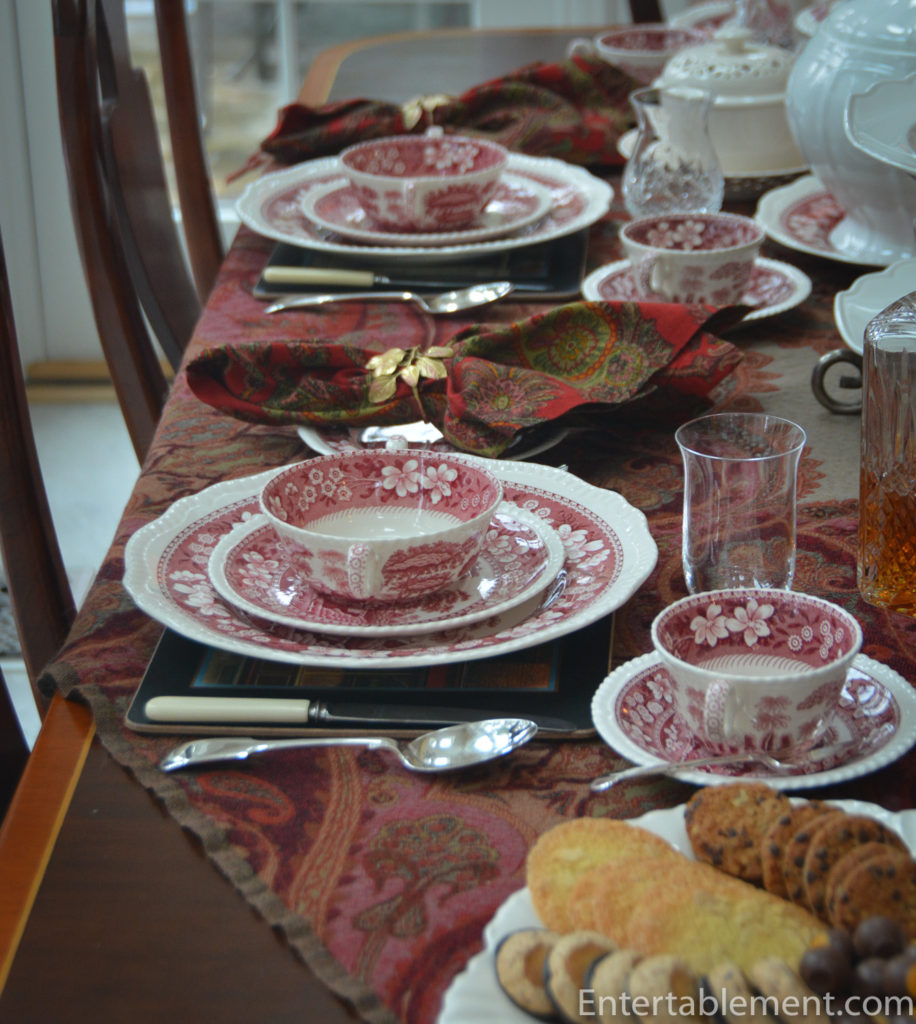 Daughter Kirsten, son Adam and Papa (Mr Entertablement) had set off early that morning with three little granddaughters for a day on the bunny-hill ski slopes. It’s the right ratio of adult-to-child at this stage in the beginner ski experience, and I knew we’d have very weary adults at the end of a few hours, complete with aching backs and arms from hauling small bodies around. A hot meal and the liberal application of a fortifying beverage seemed in order. 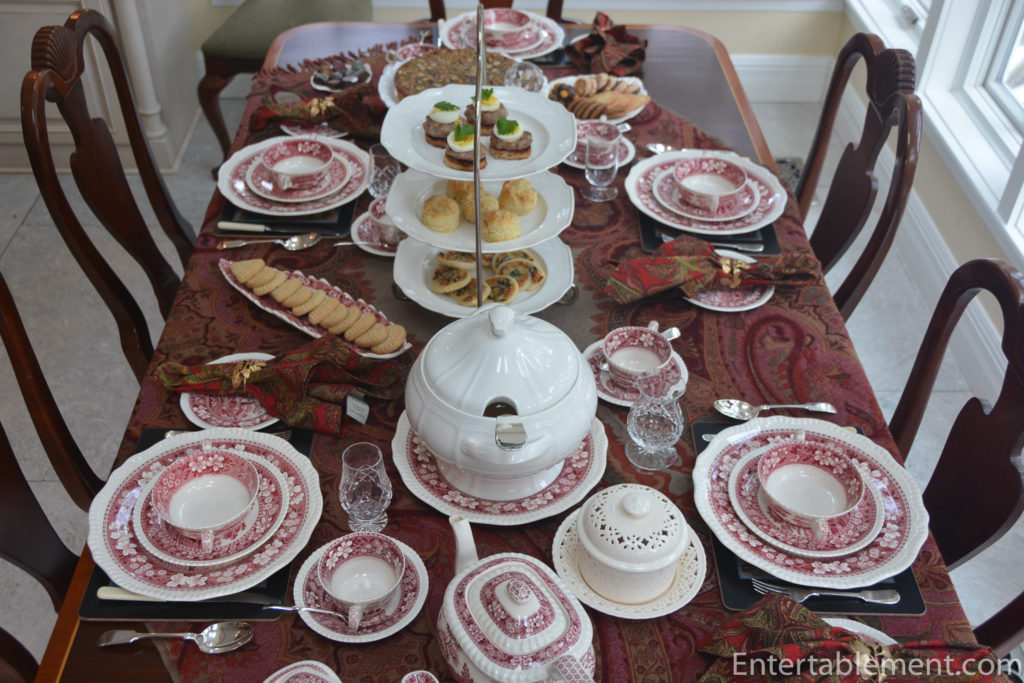 Tea doesn’t have to be a fussy meal with dainty sandwiches. Its enjoyment in the average British household is much more prosaic, despite the oft-told tale of the Duchess of Bedford and her late afternoon fainting spells. “High tea” denotes that it includes a fairly hearty protein, not that it’s “haute” or particularly elegant. 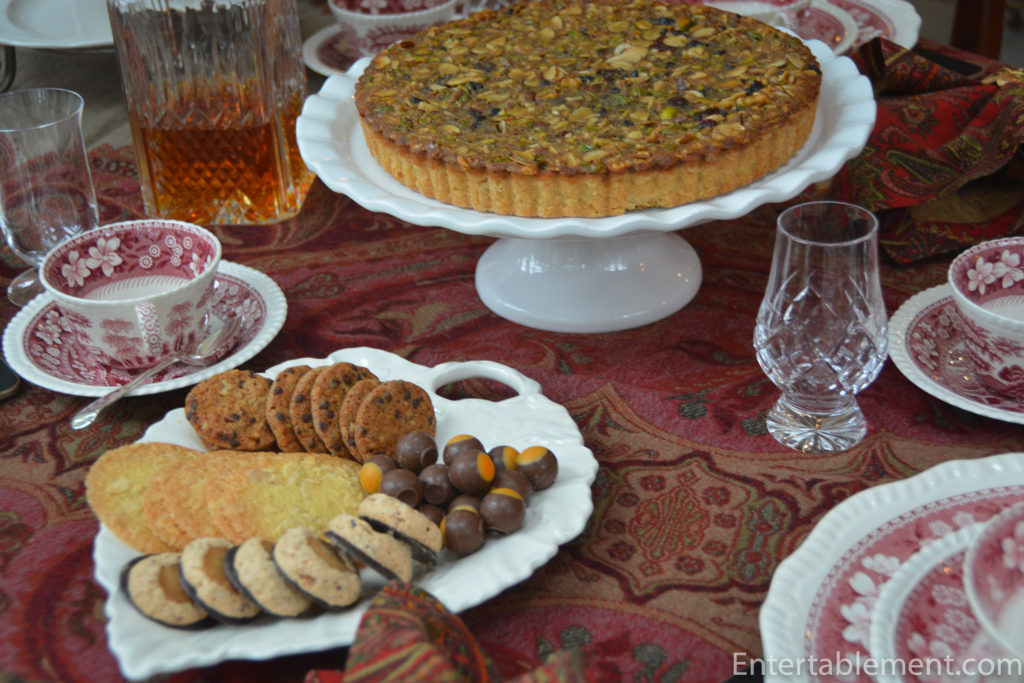 It invariably contains a sweet course, and many consider scones, crumpets or some kind of tea bun to be essential. 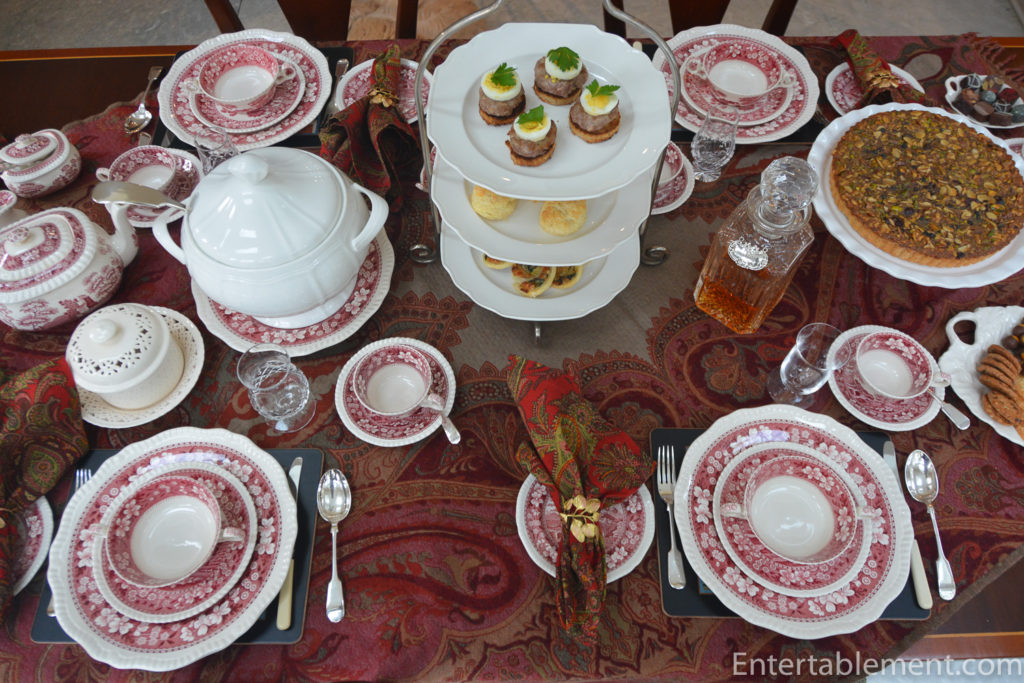 We had Broccoli Soup with Mustard Seeds with Cheese Scones to start. I thought the little girls might baulk at the soup, but they spooned it back with relish. 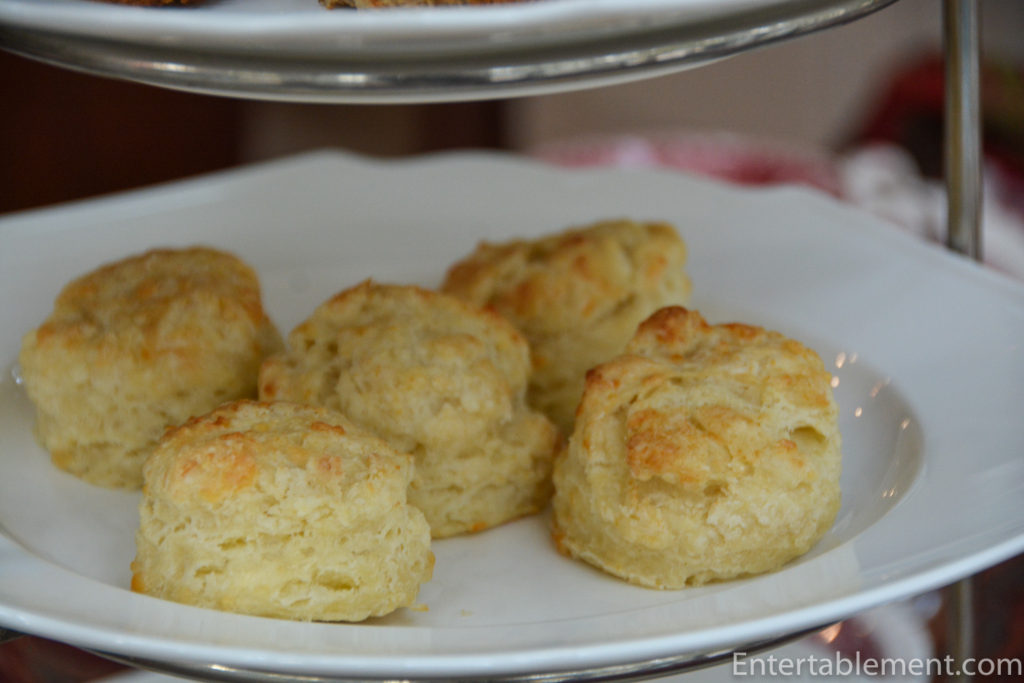 For savouries, we enjoyed Deconstructed Scotch Eggs and Spinach, Fennel, Leek and Pine Nut Pinwheels. Those went down very quickly. 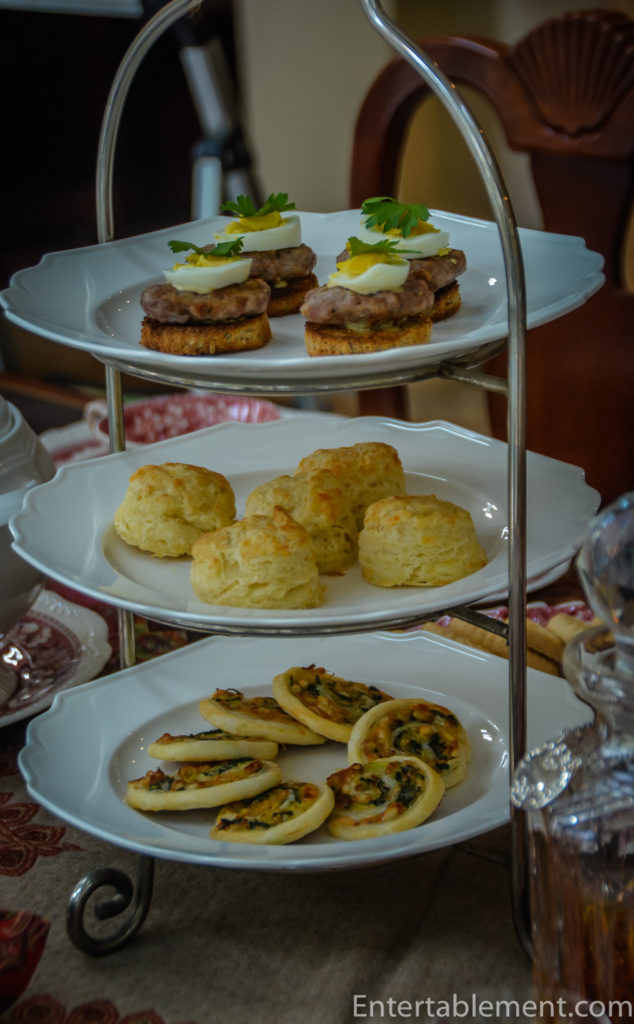 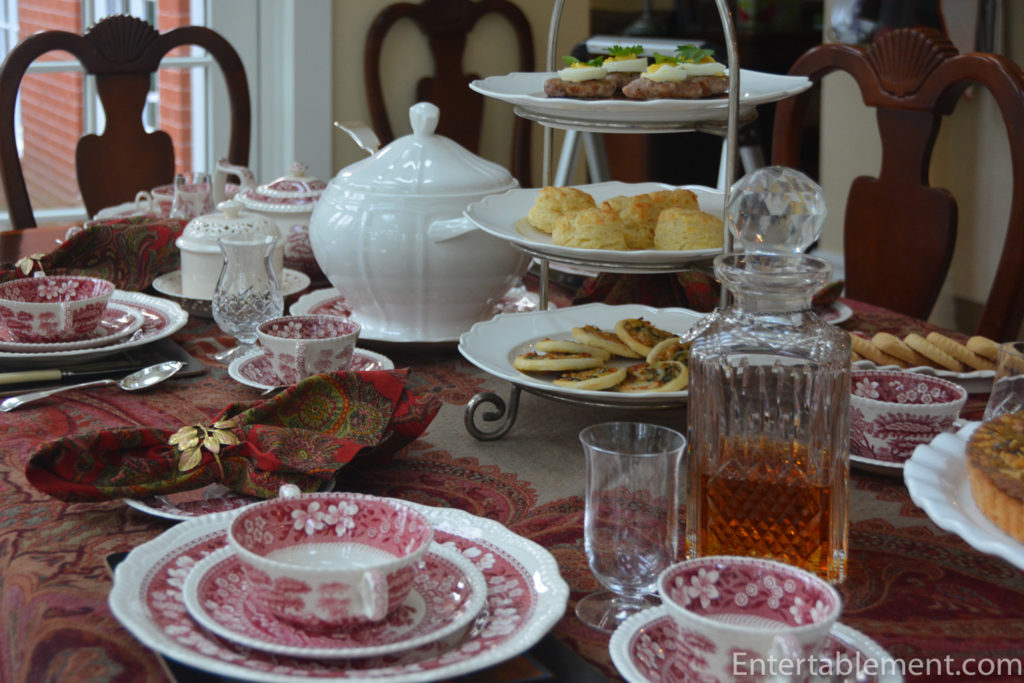 A Scottish Tart, some chocolates, biscuits and shortbread (purchased) filled in any chinks. 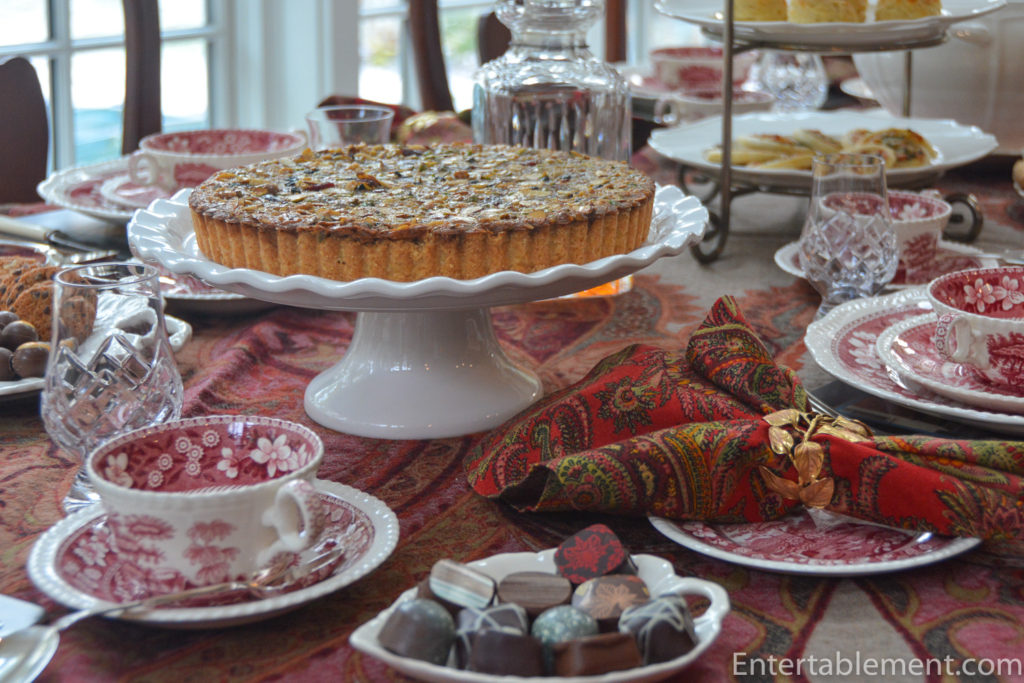 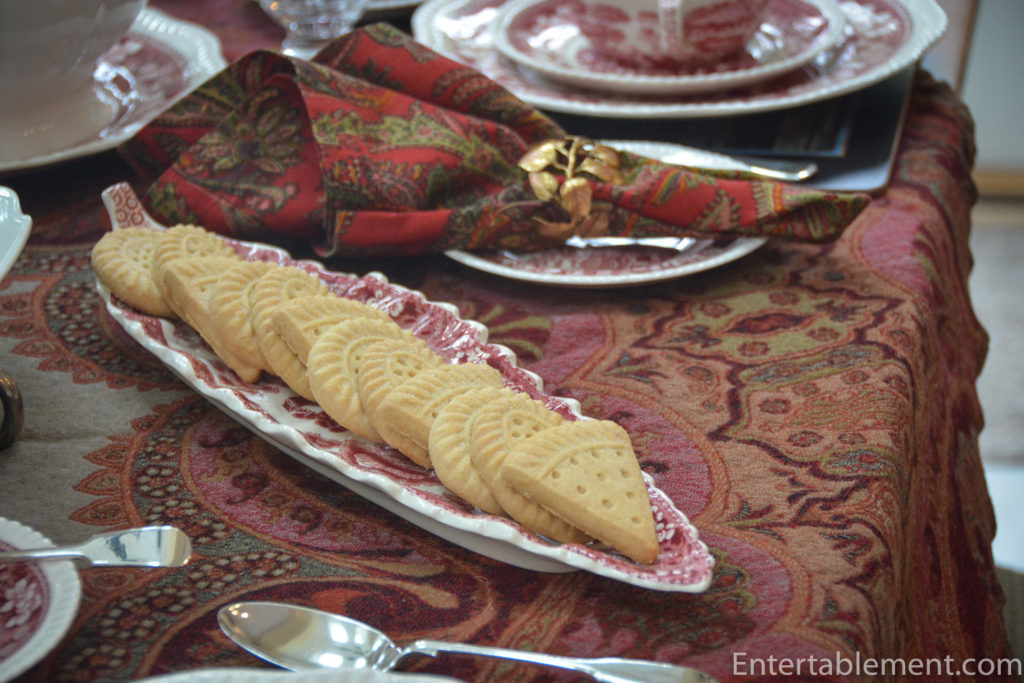 This was all washed down with copious quantities of Scottish Breakfast Tea and a wee dram for the imbibing adults. The little girls get such a kick out of drinking tea from a proper cup and saucer after carefully adding their milk and sugar and stirring it around with a demitasse spoon. 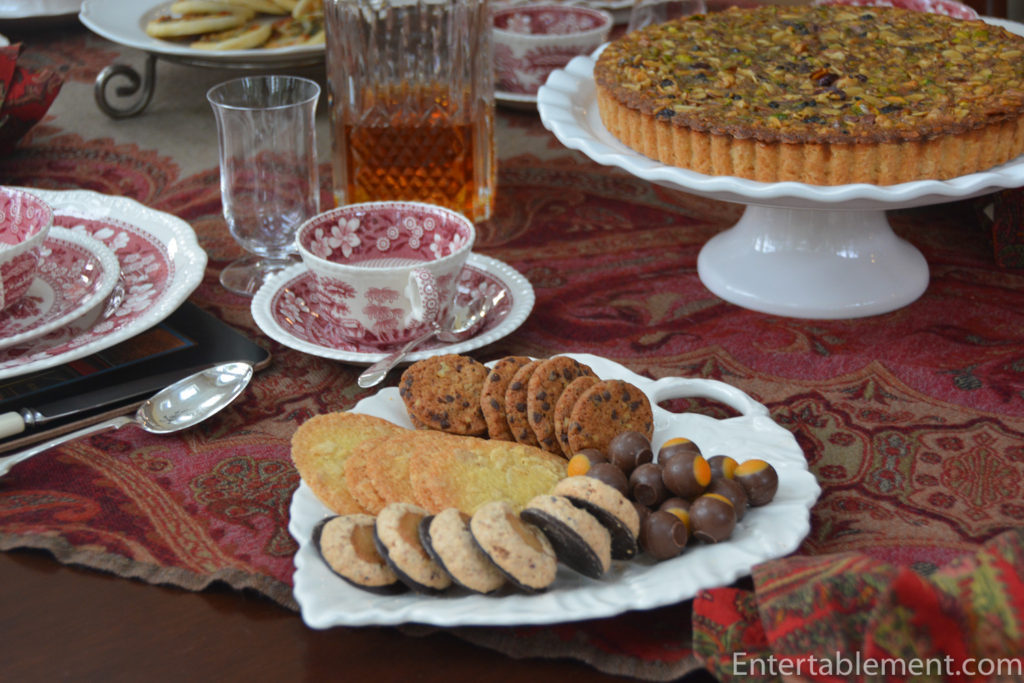 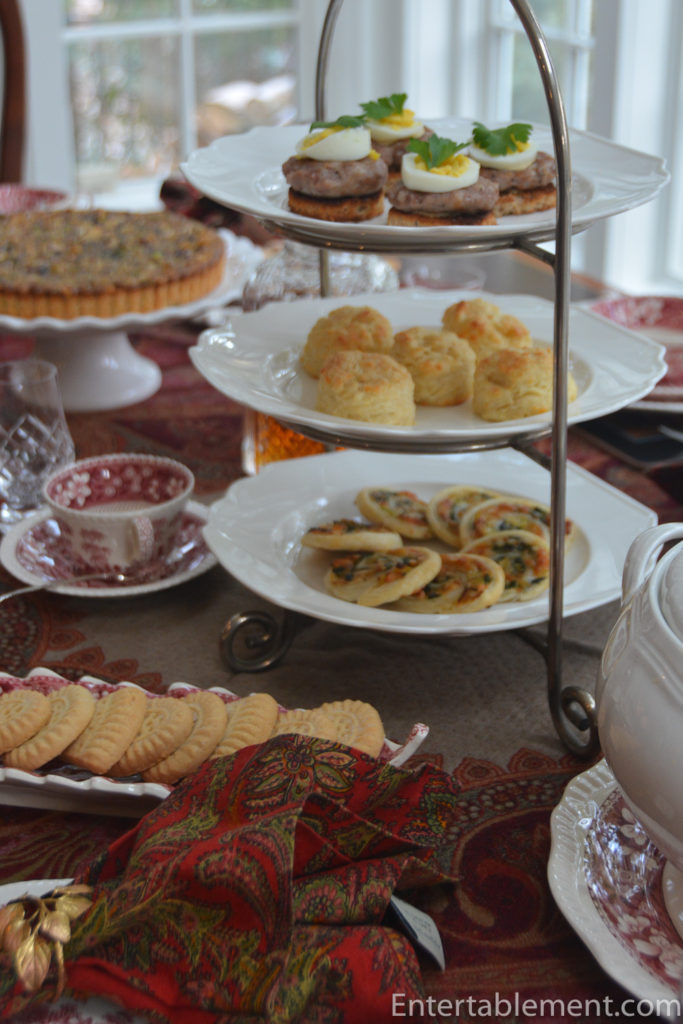 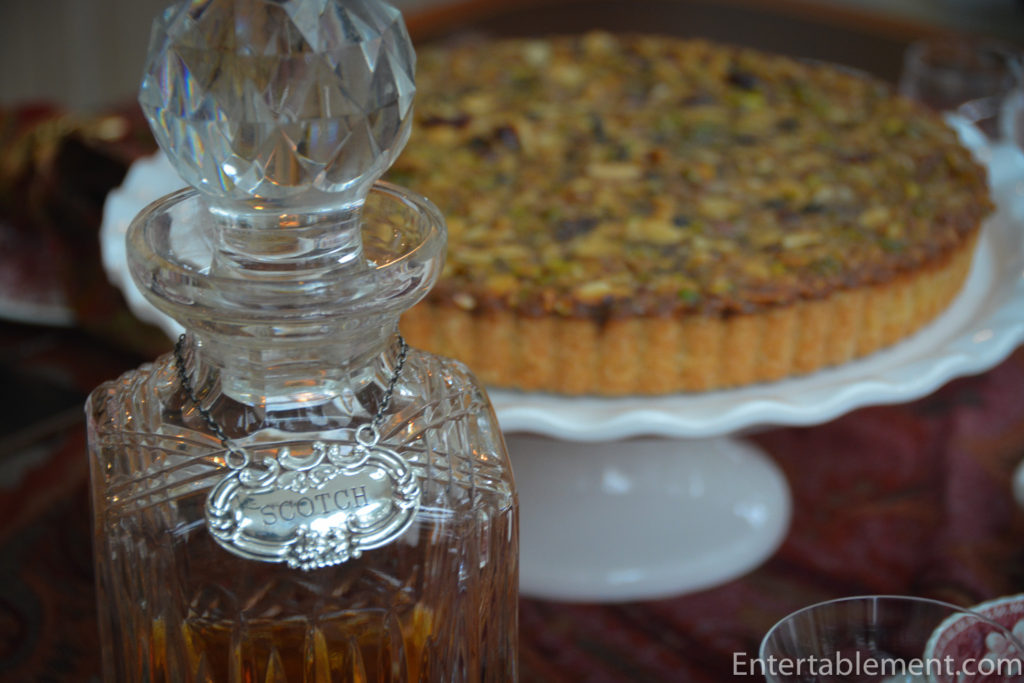 Everyone replete, they rose from the table and contemplated hot baths and an early night. At least the grown-ups did; the little ones were happy to play downstairs in the Playhouse Under the Stairs for a while before struggling back into still-damp outerwear and being hustled off home. It was a very fun day. 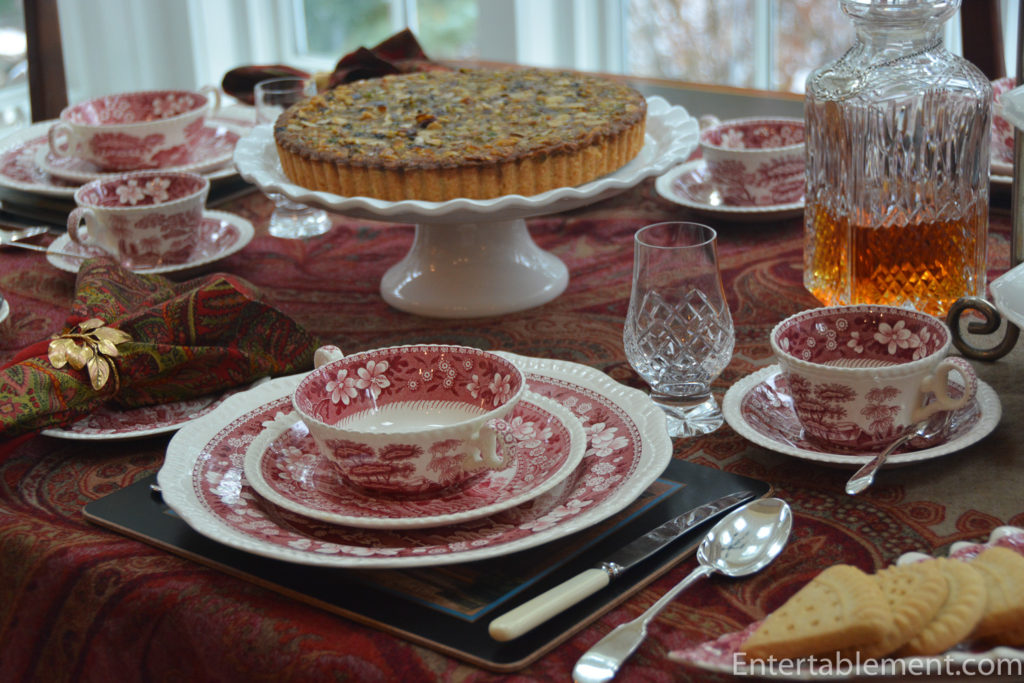 For those interested in sources, the red and white transferware is Tower Pink by Spode and is a combination of modern (the plates, cups & saucers, teapot, creamer & sugar) and vintage (the soup cups & saucers and the leaf plate containing the shortbread) pieces. 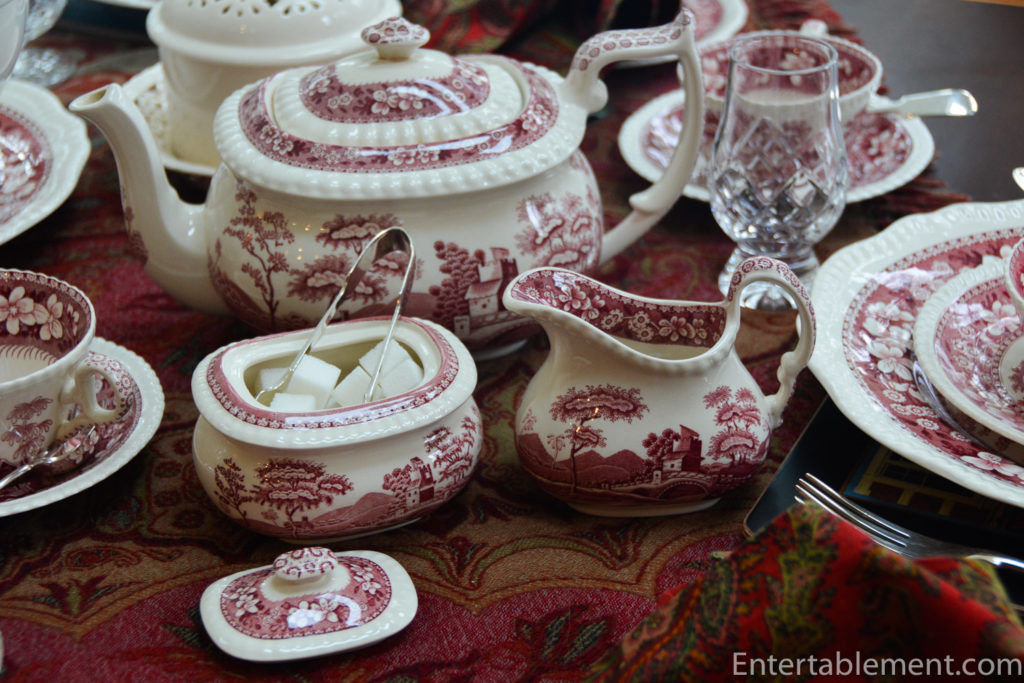 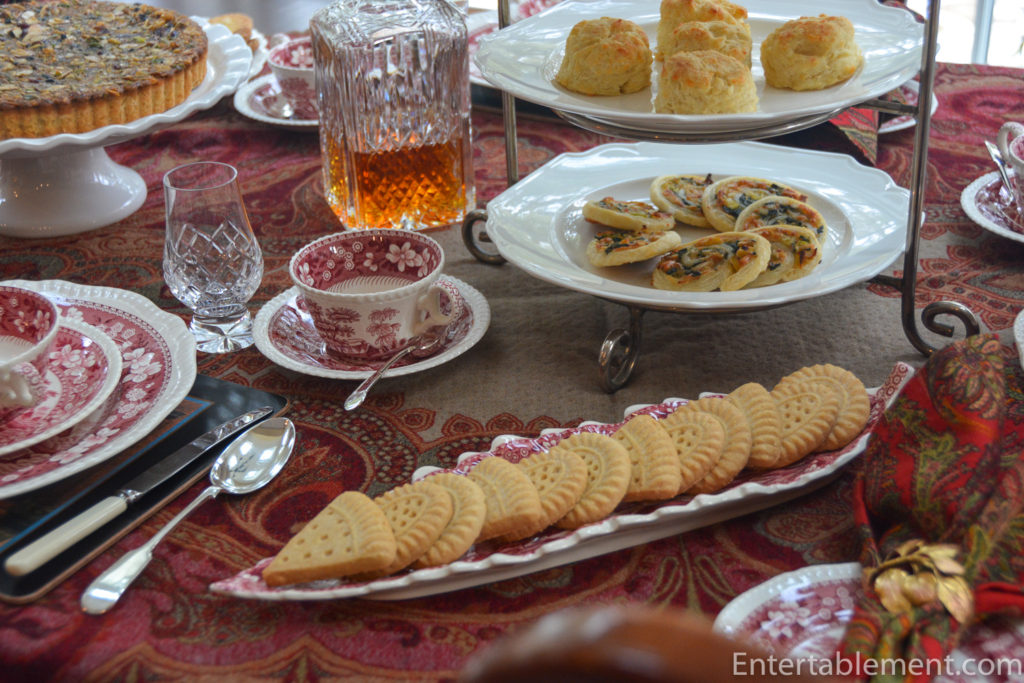 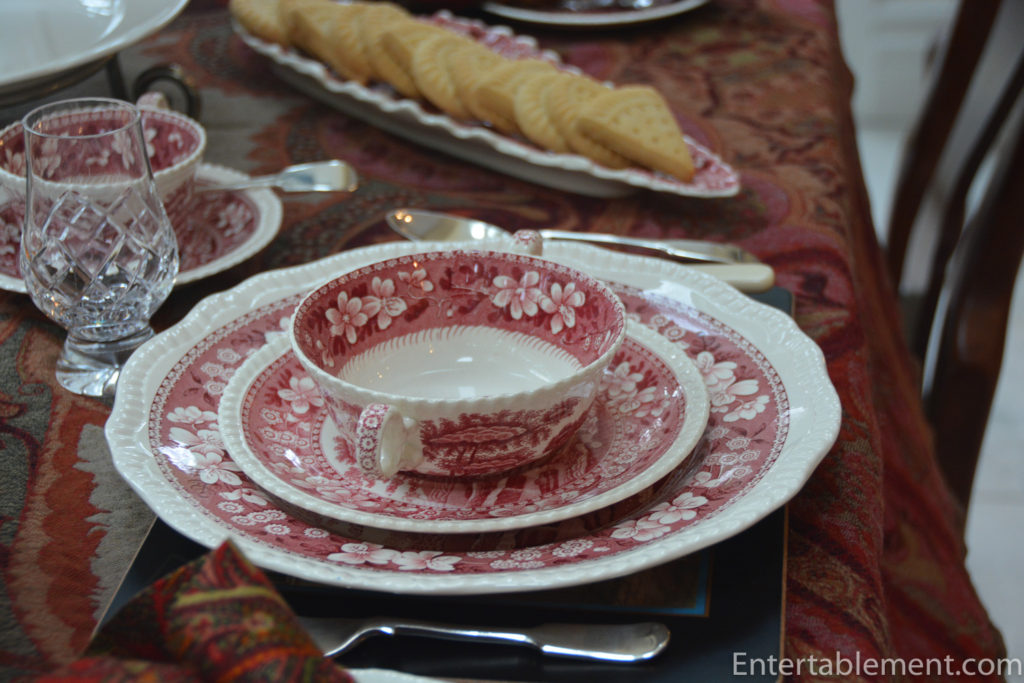 The white china is Country Heritage by Villeroy & Boch (the dinner plates on the stand), Mikasa Antique White (the soup tureen) and Hartley Greens Creamware (the butter dish and leaf plate holding the biscuits and orange-tipped chocolate balls). The white curly-rimmed cake stand is a HomeGoods find. 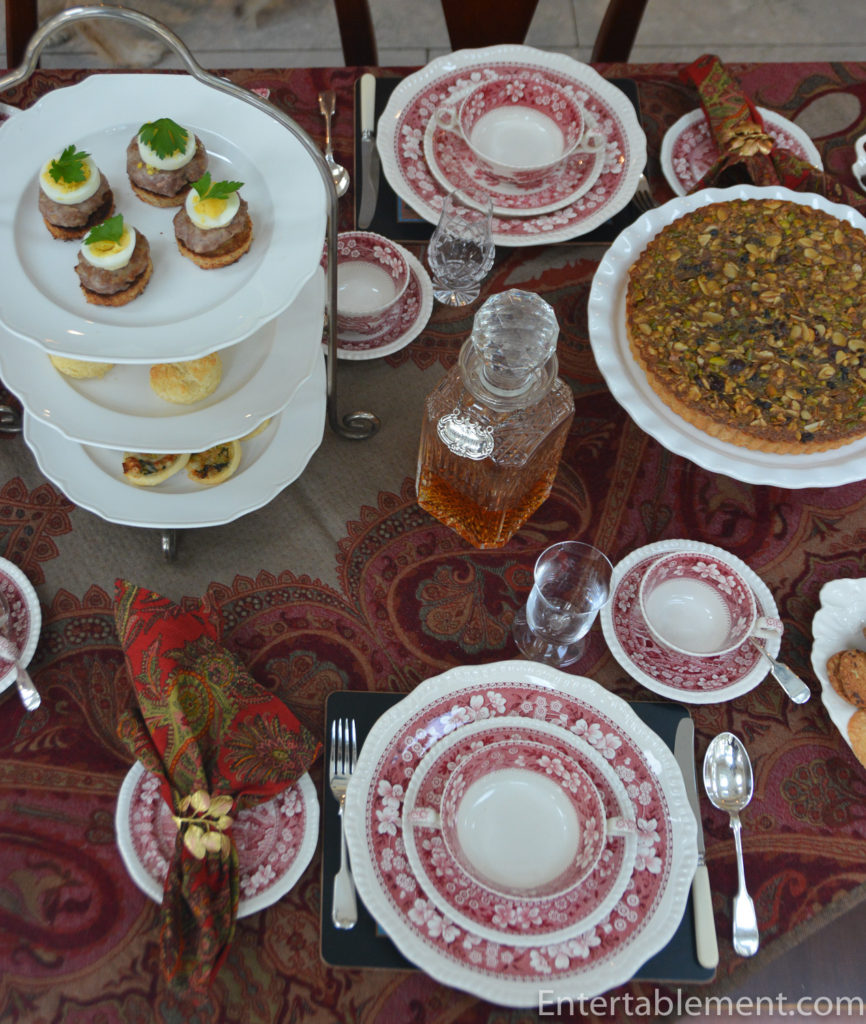 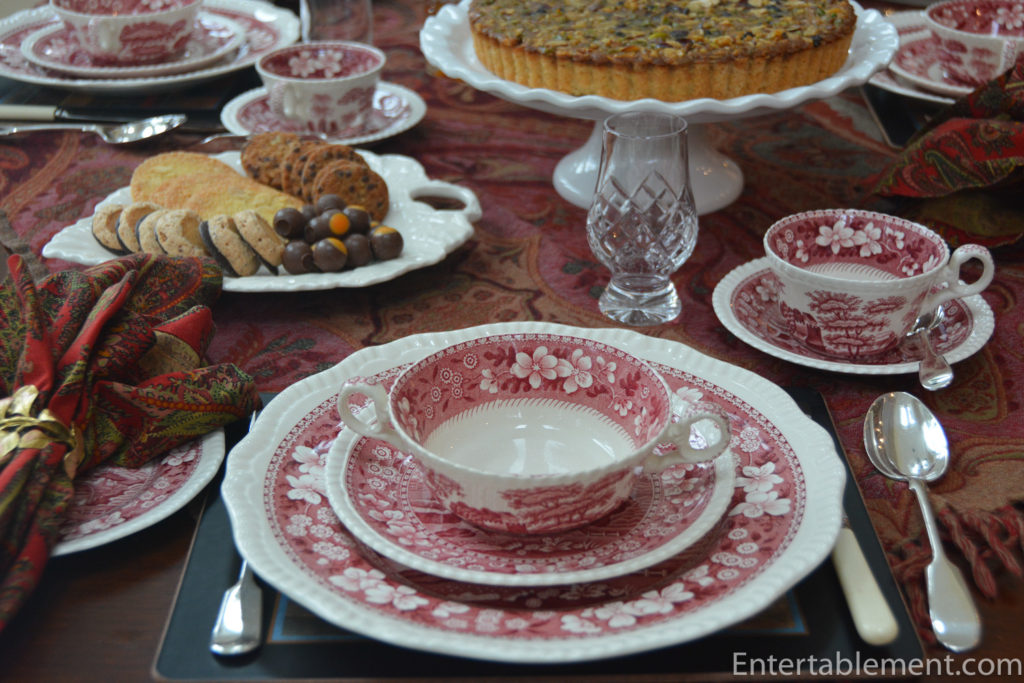 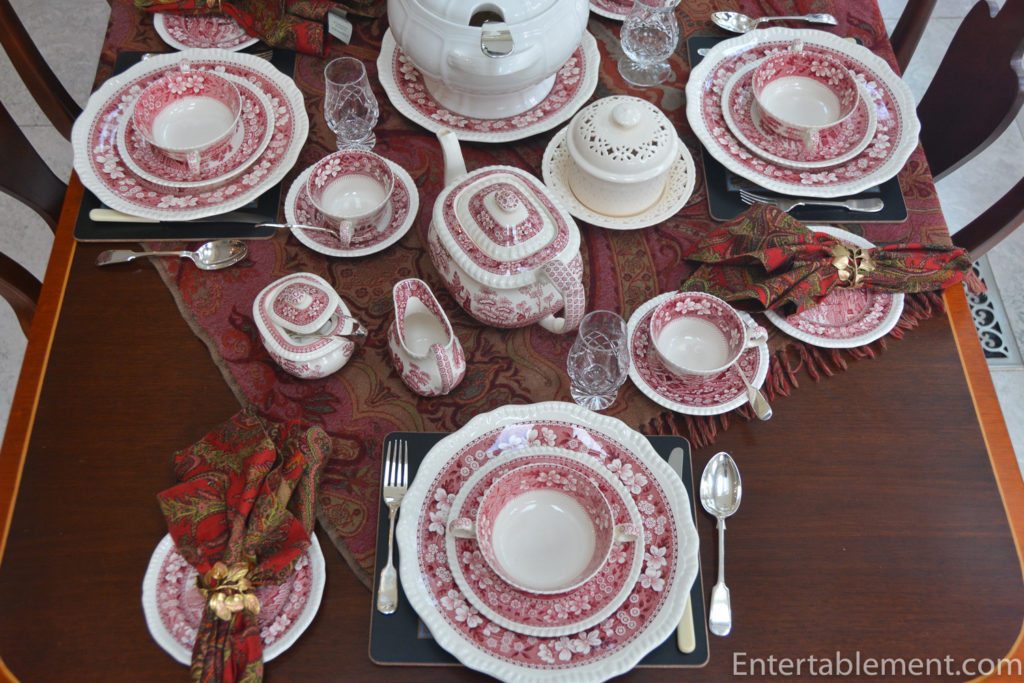 The decanter is Manhattan by Stuart. The Scotch label is an antique. The Glencairn cut-crystal Scotch glasses are from the Whiskey Shop on Piccadilly in London, England (one of Glenn’s favourite stops on our trips; they are most generous with their samples). 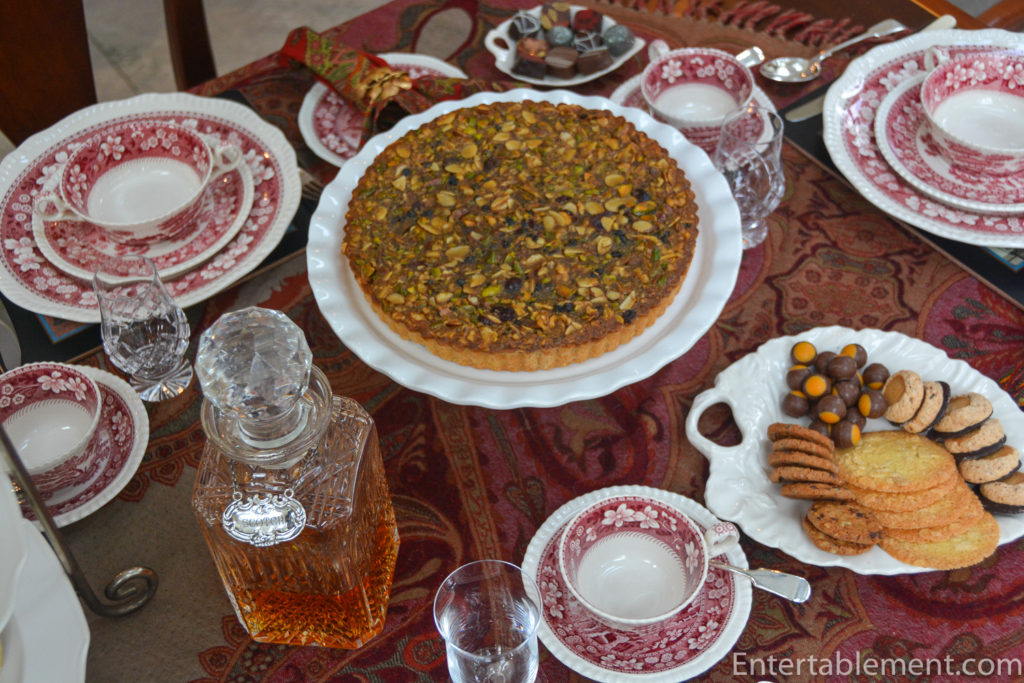 The napkins are from Pottery Barn a few years ago and I believe the napkin rings are by Michael Arum. I picked them up years ago at Chintz & Co. in Victoria, BC.  The paisley throw serving as a tablecloth is from (now defunct) Country Dining Room Antiques in Great Barrington, Mass, and was acquired about 20 years ago. Yikes! 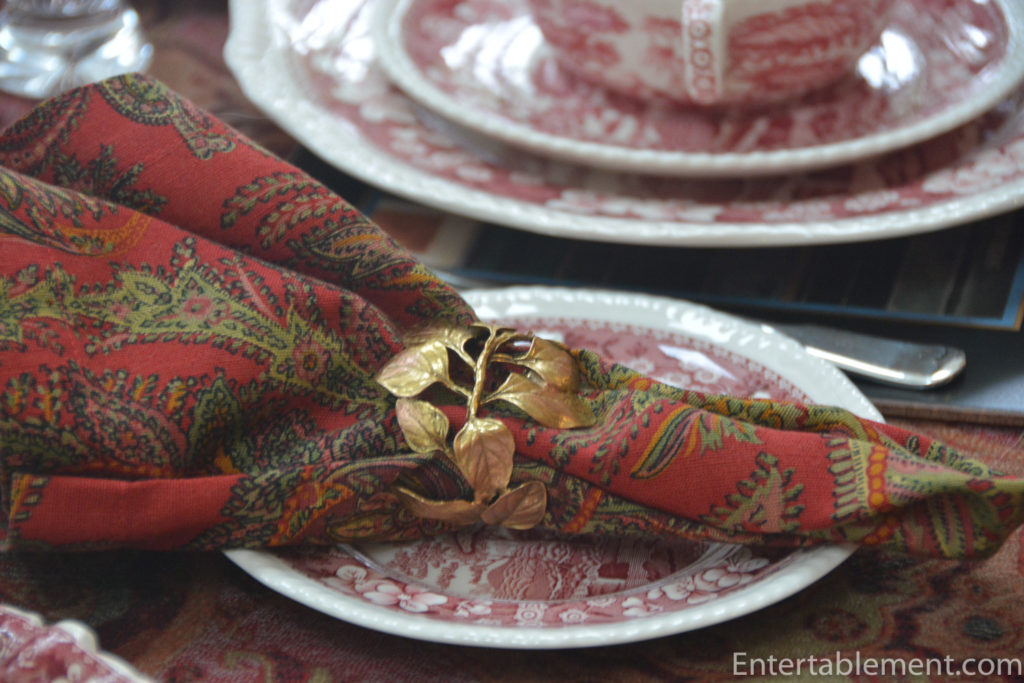 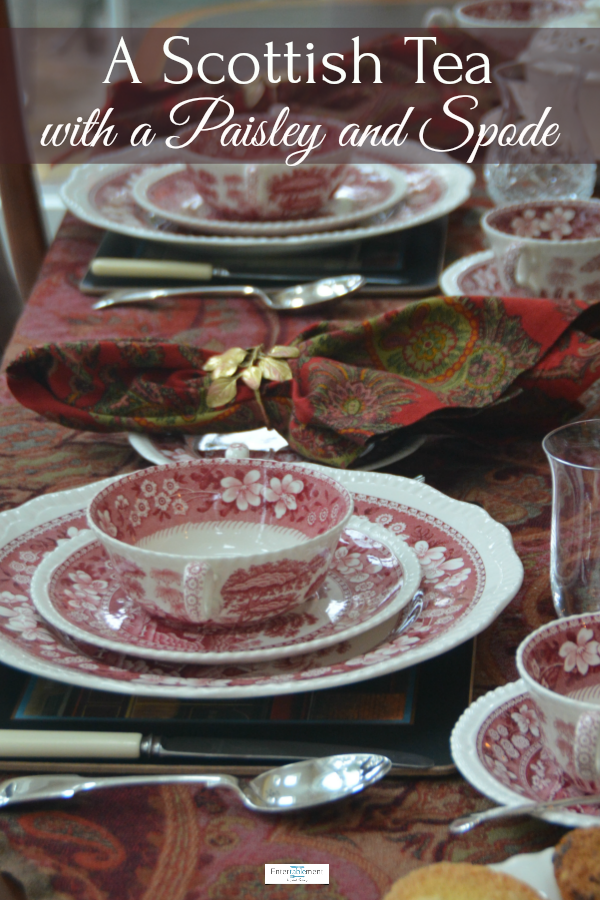