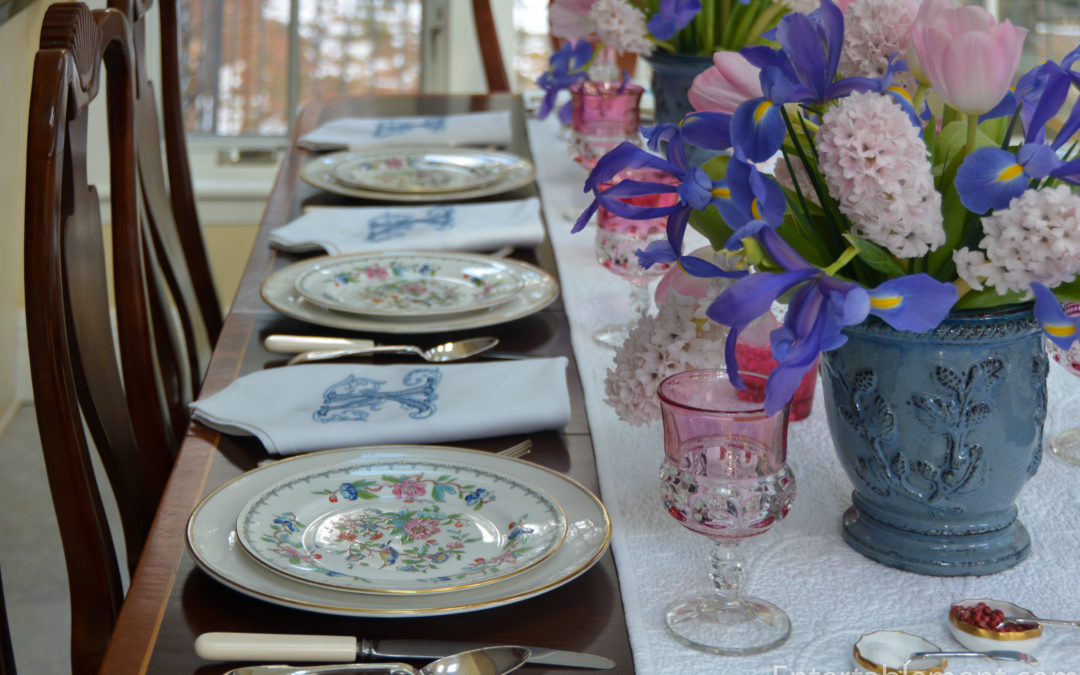 Well, I think we could all do with a bit of cheering up. Enter Pembroke by Aynsley. 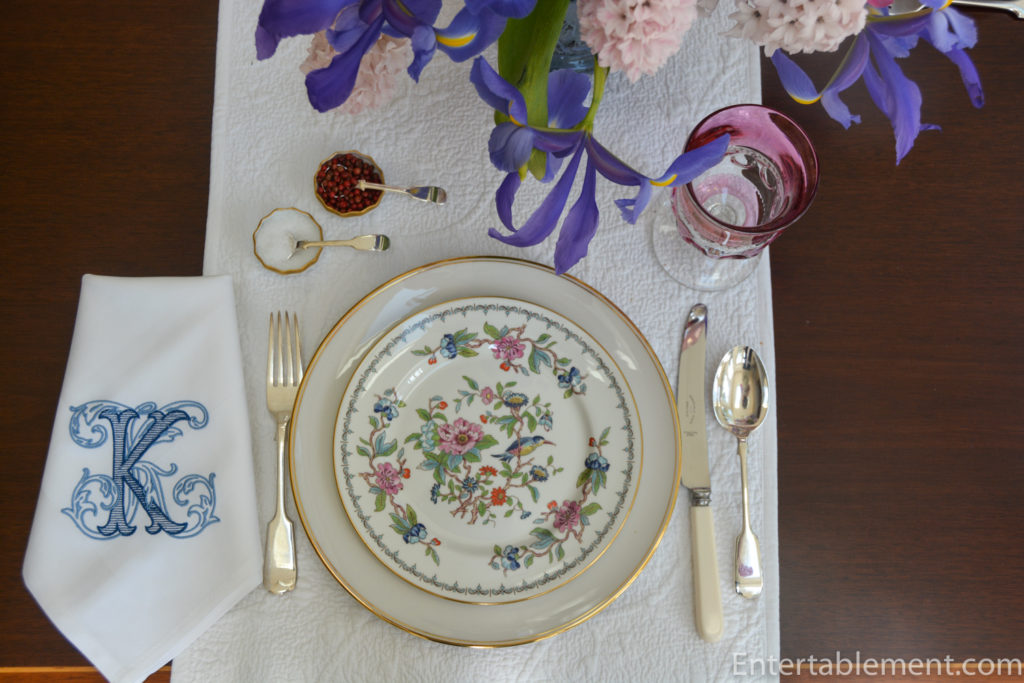 According to the Replacements’ website, “Founded in 1775, John Aynsley & Sons China is one of the most influential companies in the British tableware industry. Pembroke-Gold Trim is an iconic Aynsley dinnerware pattern that features a sprawling, brilliantly colored floral motif based on an Asian-inspired, 18th-century Aynsley design.” 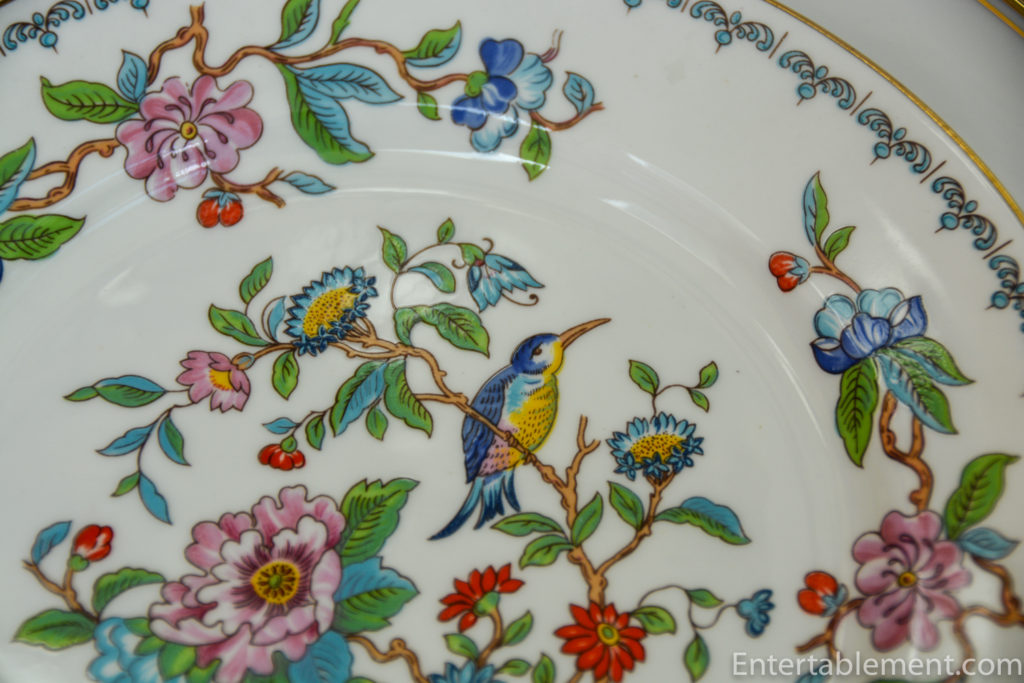 The colours are vibrant and the pattern has a good deal of  “white space”, making it look quite modern, though It was produced from 1985 to 2015. 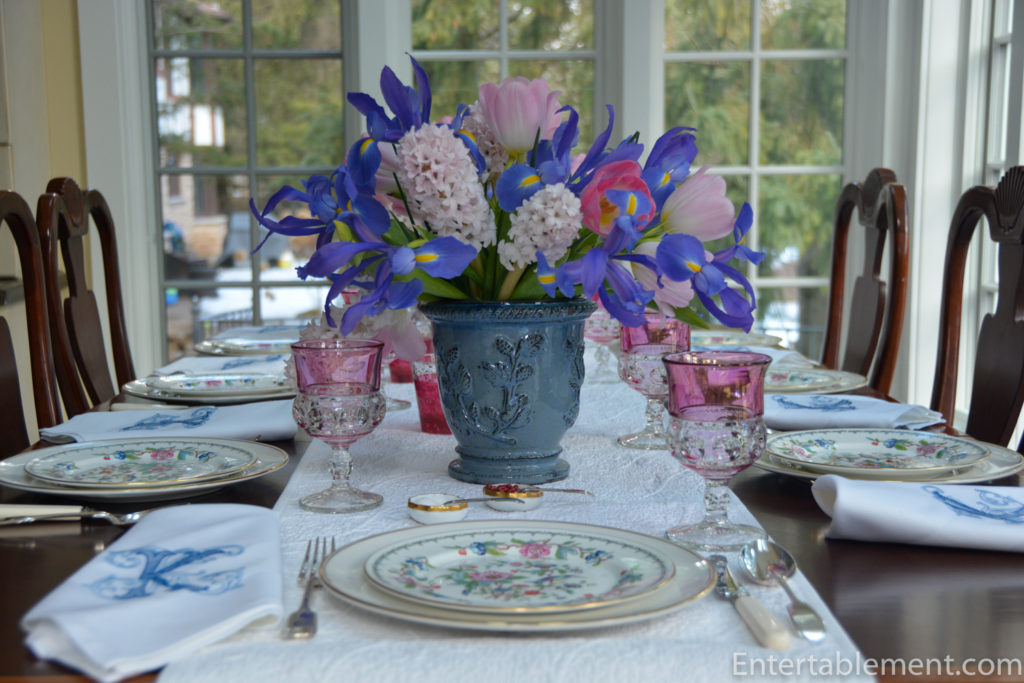 I had a marvellous time putting the flowers together. The multitude of pink and blue shades in the Pembroke pattern provided plenty of scope. Blue irises, deep and pale pink tulips and fragrant pale pink hyacinths made cheerful centrepieces. 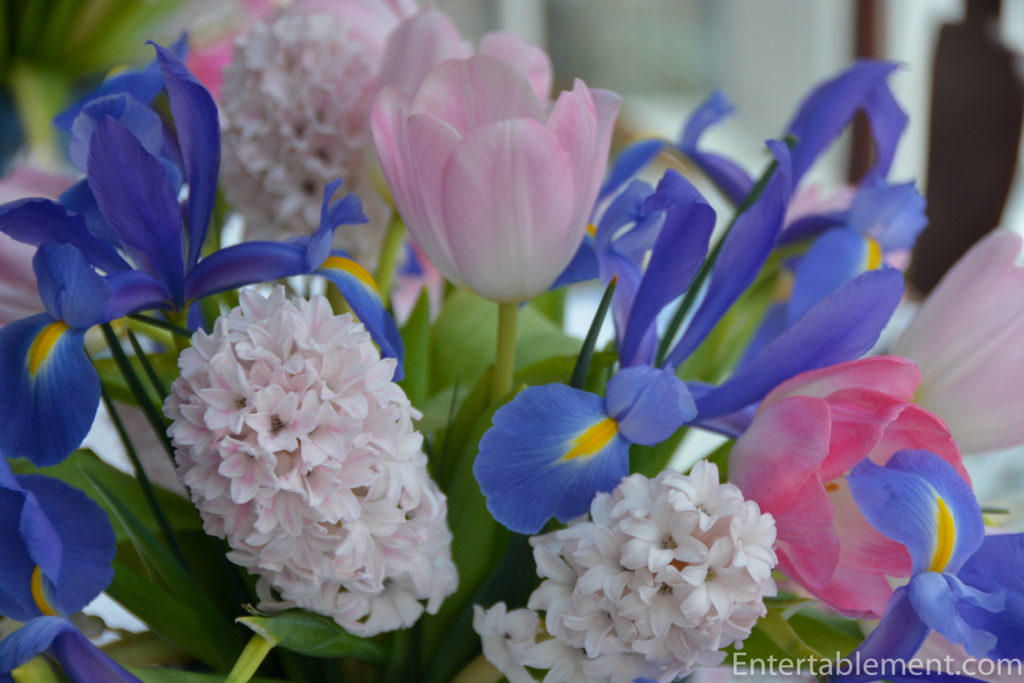 The napkins are a new addition from Julia Embroidery on Etsy, who offers a broad array of monogrammed napkins in various fonts and colours. 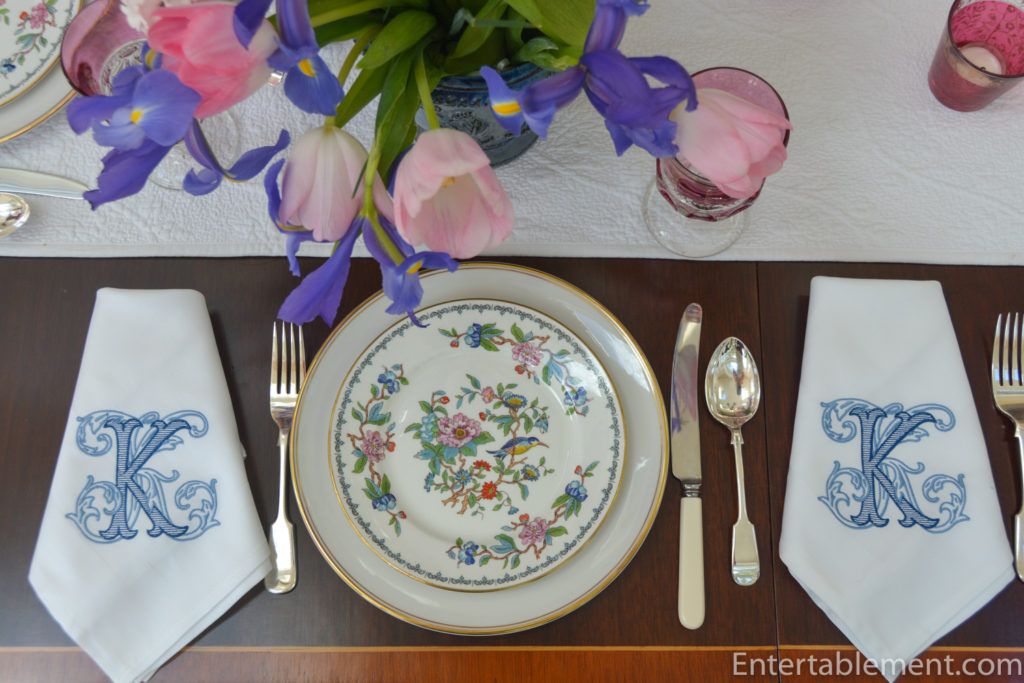 I had a tough time deciding but in the end, went with a single initial in two shades of blue. I think they will get a lot of use! 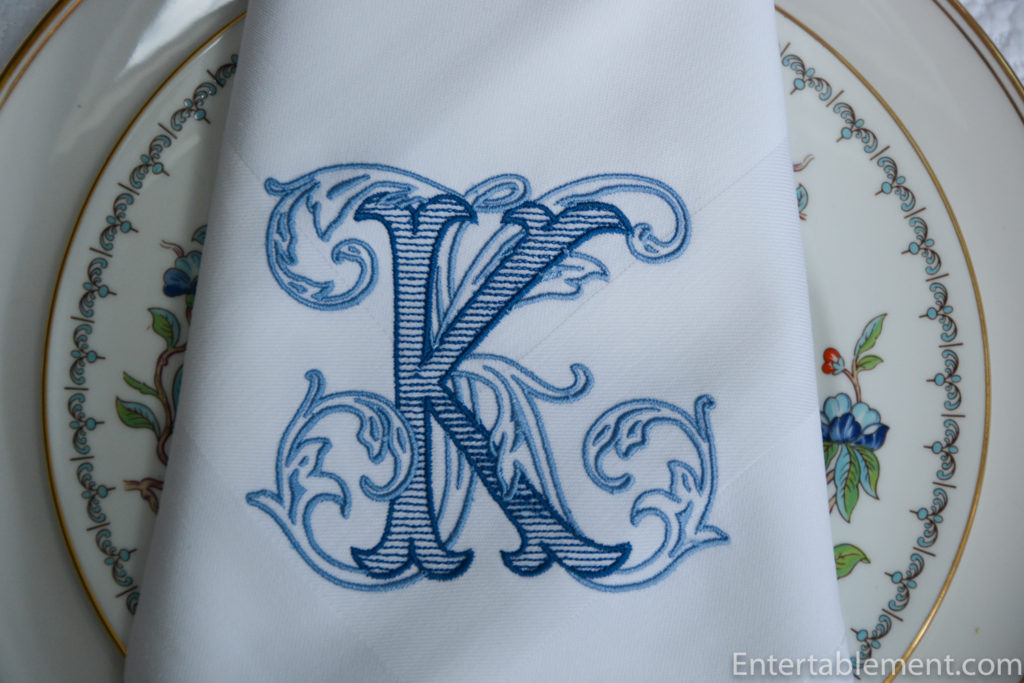 I was originally going to use cobalt glasses, but with the blue in the napkins, King’s Crown Ruby Flashed thumbprint glasses got another outing. These aren’t quite depression glasses, having been produced from 1943 to 1962. They’re quite a bit “clunkier” than elegant Depression glass, but I like their sturdy physique. 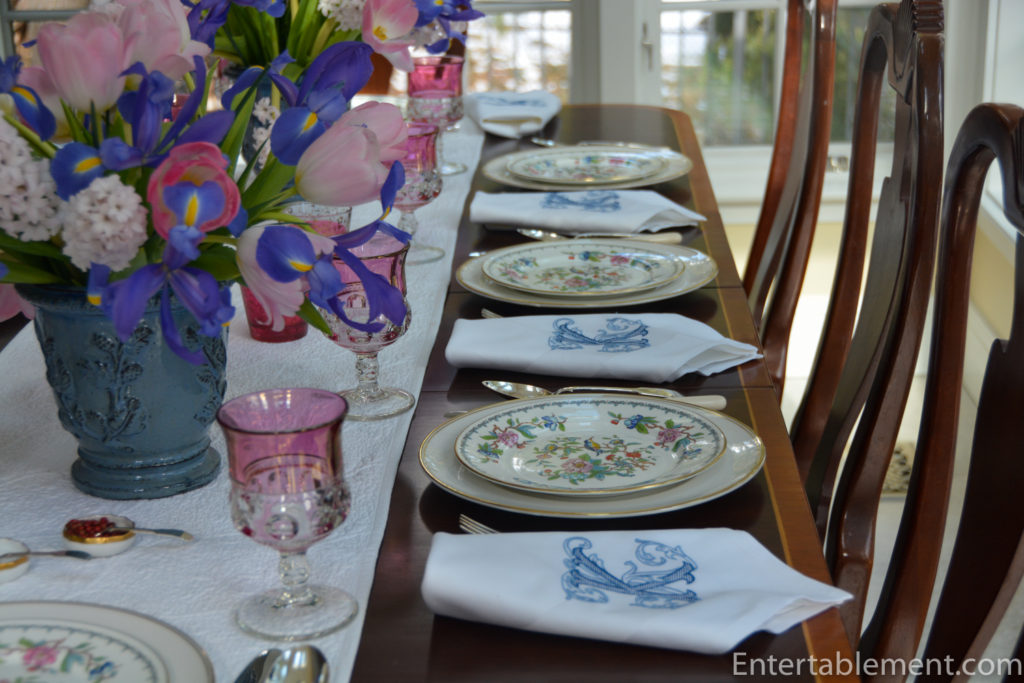 Having said all that, the flowers really are the stars of the show on this table. Please take a bow. 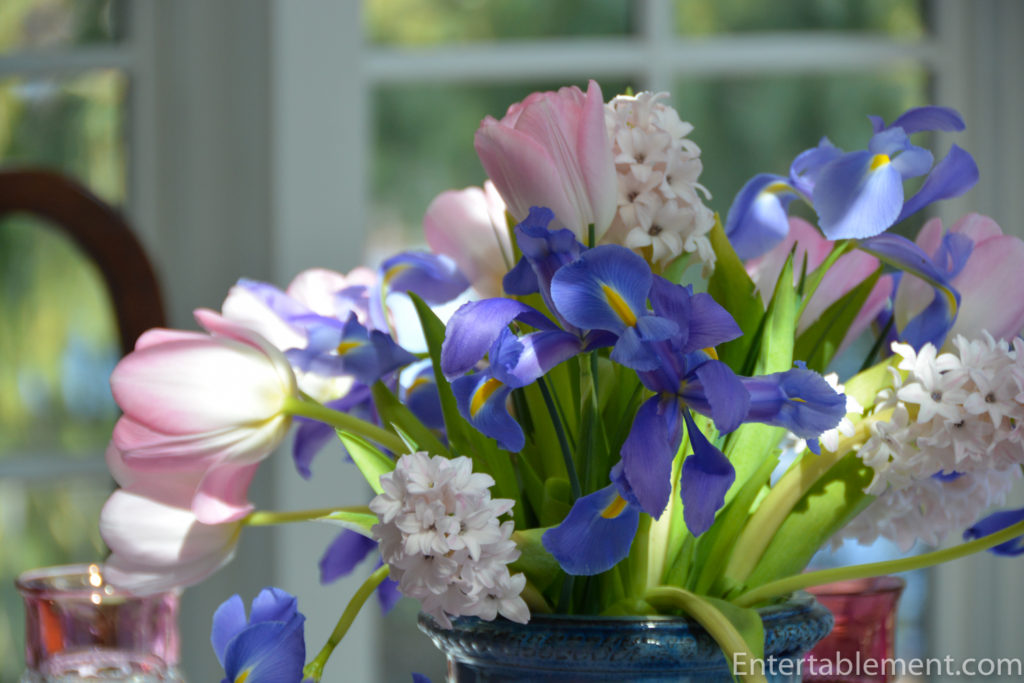 The containers are glazed clay planters whose lack of delicacy echoes the heft of the goblets. 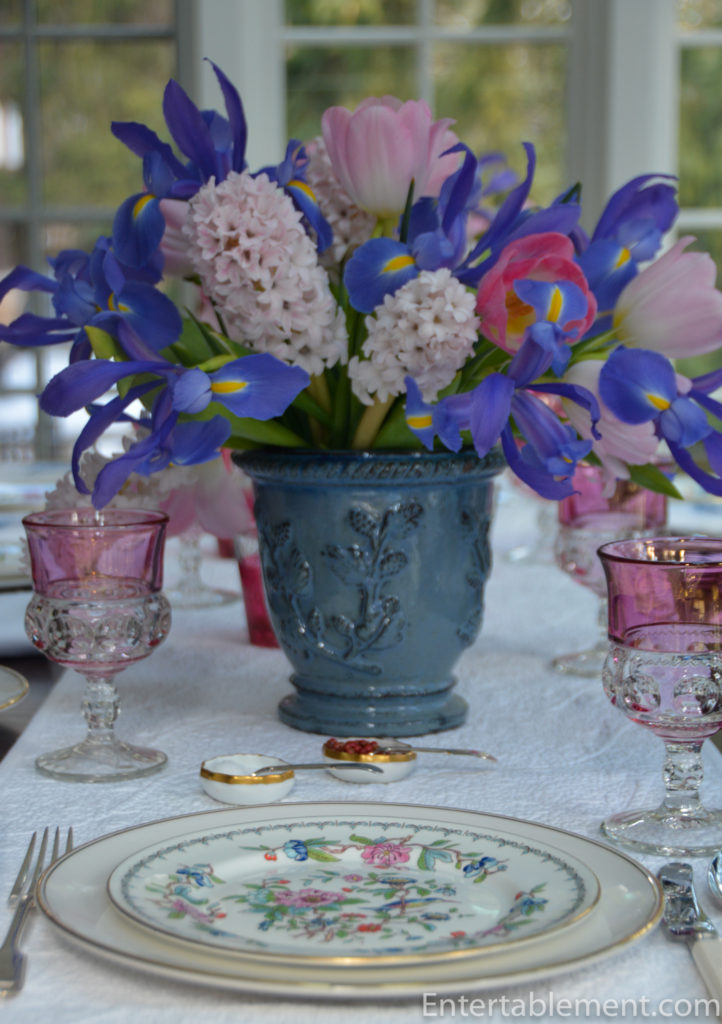 They’ll hold us over until the bulbs start appearing in our still chilly gardens, 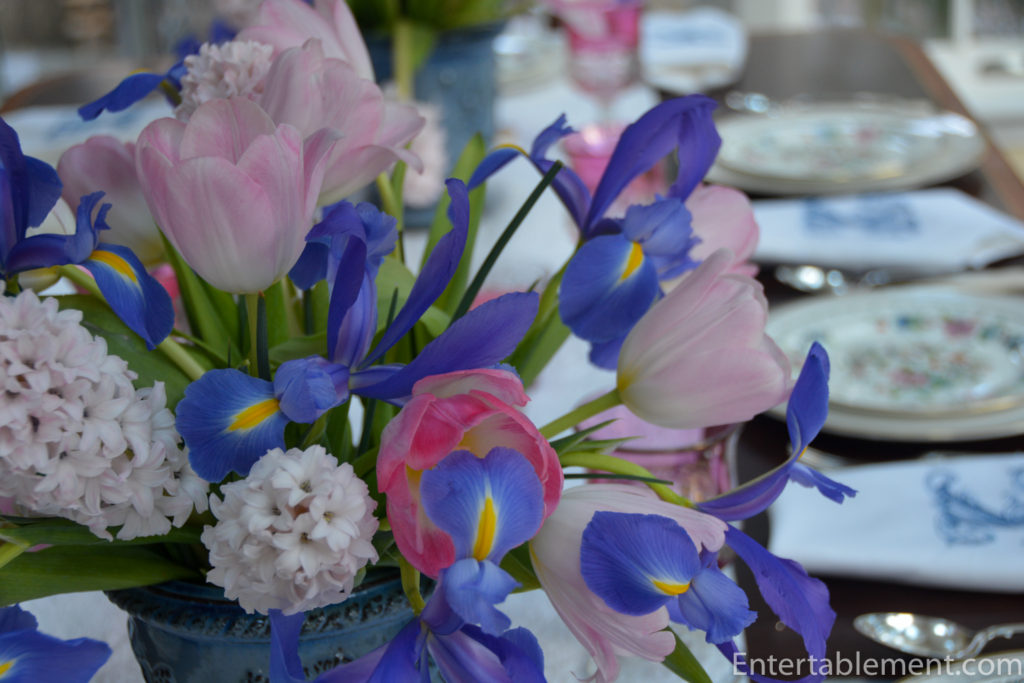 Speaking of still chilly, you might remember me mentioning we got a load of snow last week. Some members of the household really enjoyed it! Churchill started by calmly surveying his white world. 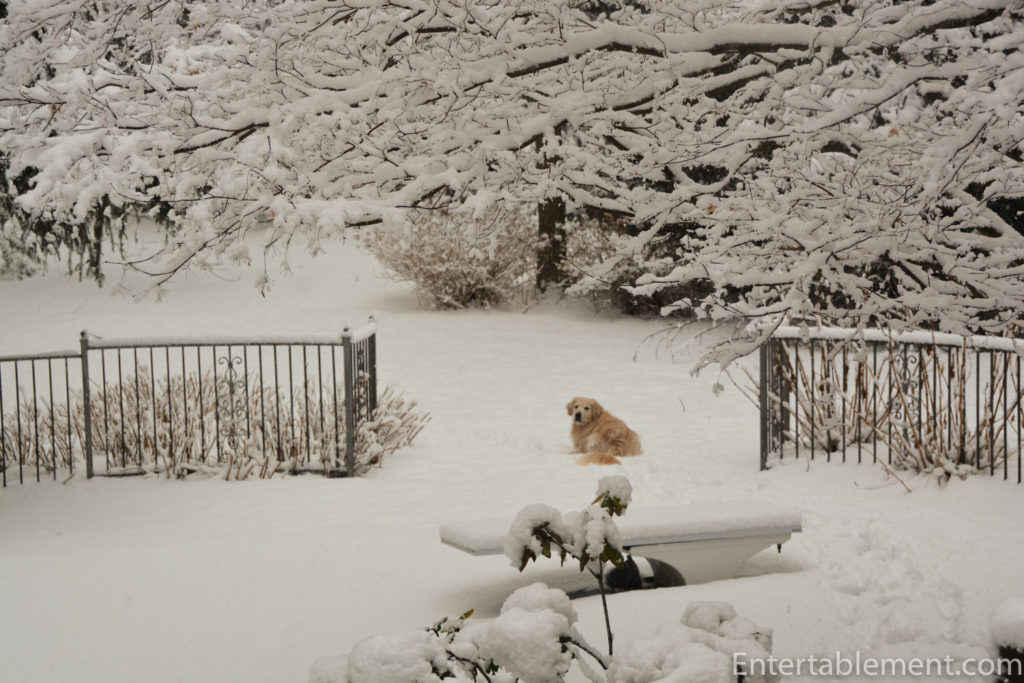 He then quickly joined in a frenzied game of chase-me-Charlie with the irrepressible Clementine. 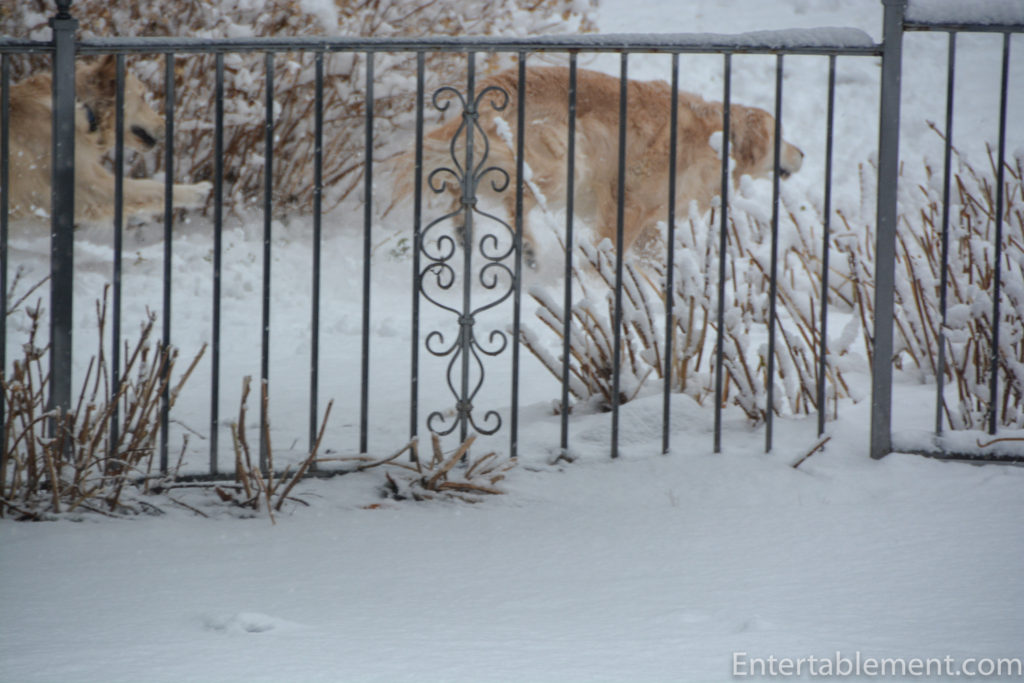 Careening around the yard at breakneck speed, they had a marvellous time. 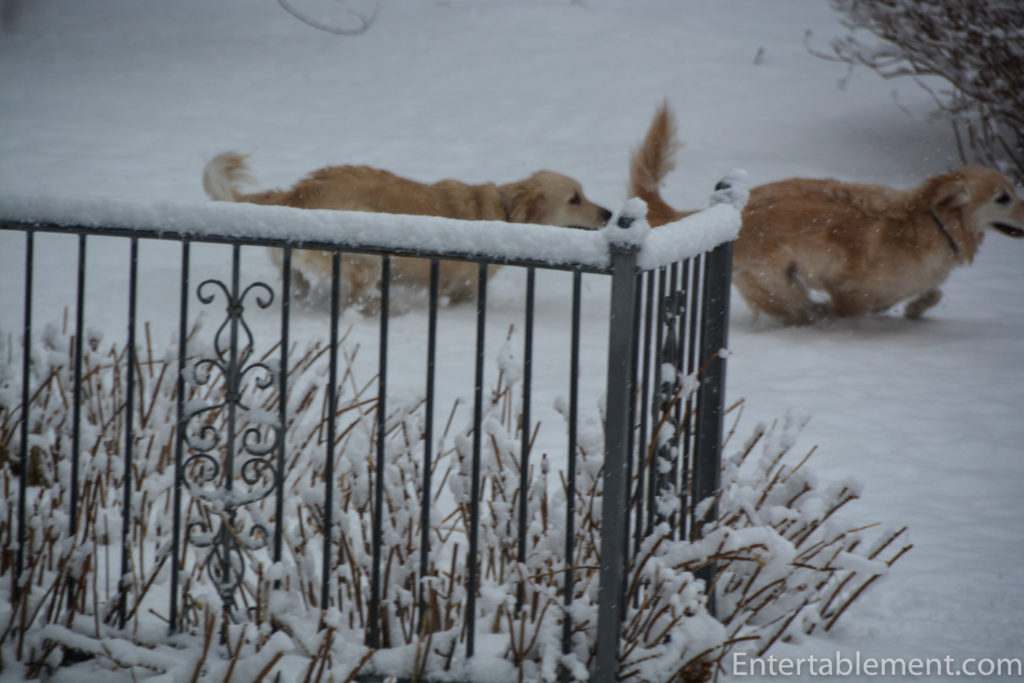 Ears flying, they seemed to proclaim”You’re it!” 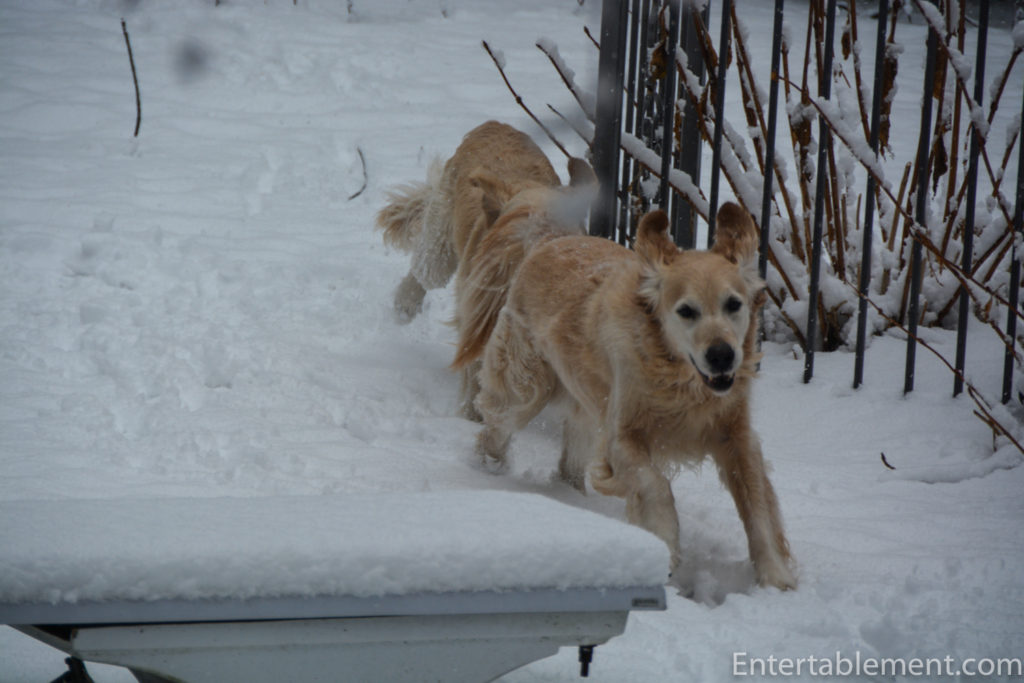 The pace finally slowed and they got down to the serious business of rolling vigorously. It’s important to grind the snow into every bit of fur, so you can completely soak the carpeting when allowed back into the house. 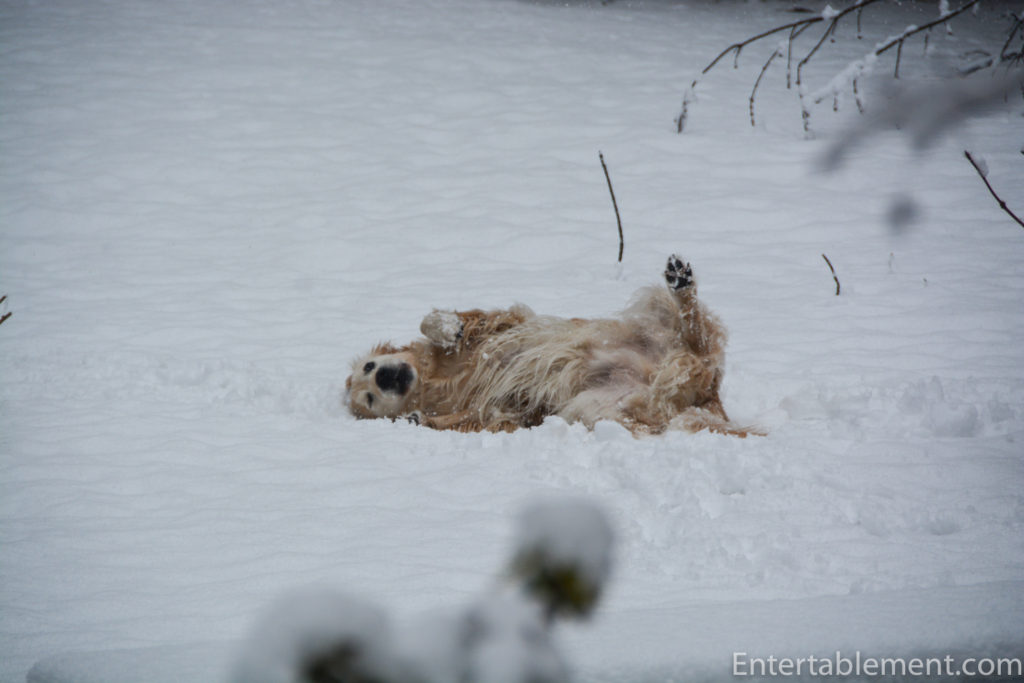 The picture of contentment. 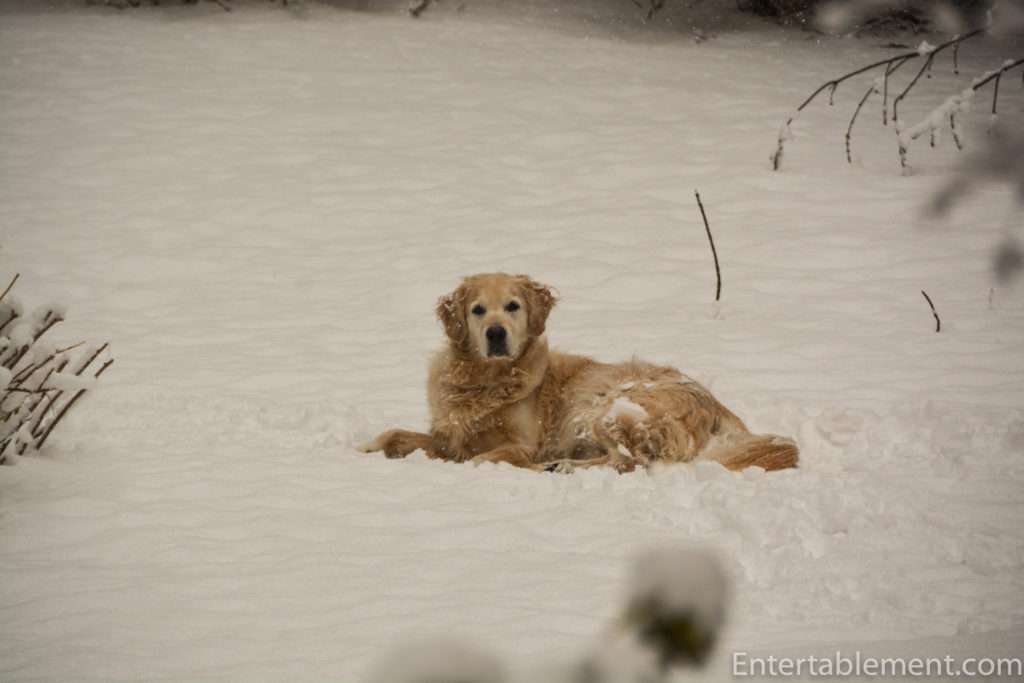 Enjoy the rest of the week, everyone. Stay safe and keep washing those hands! 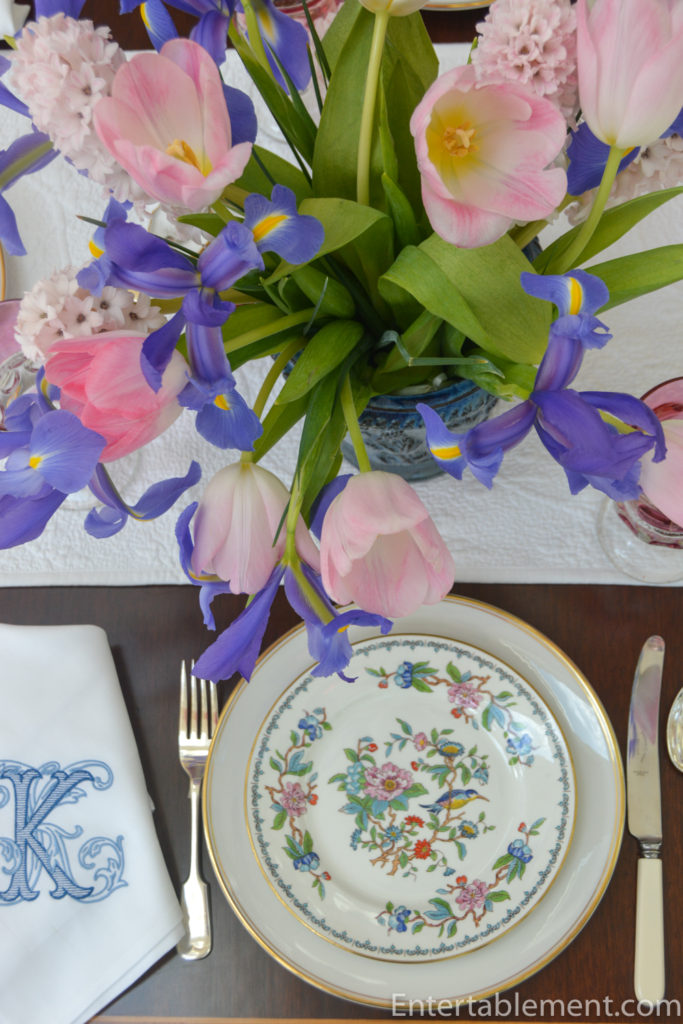