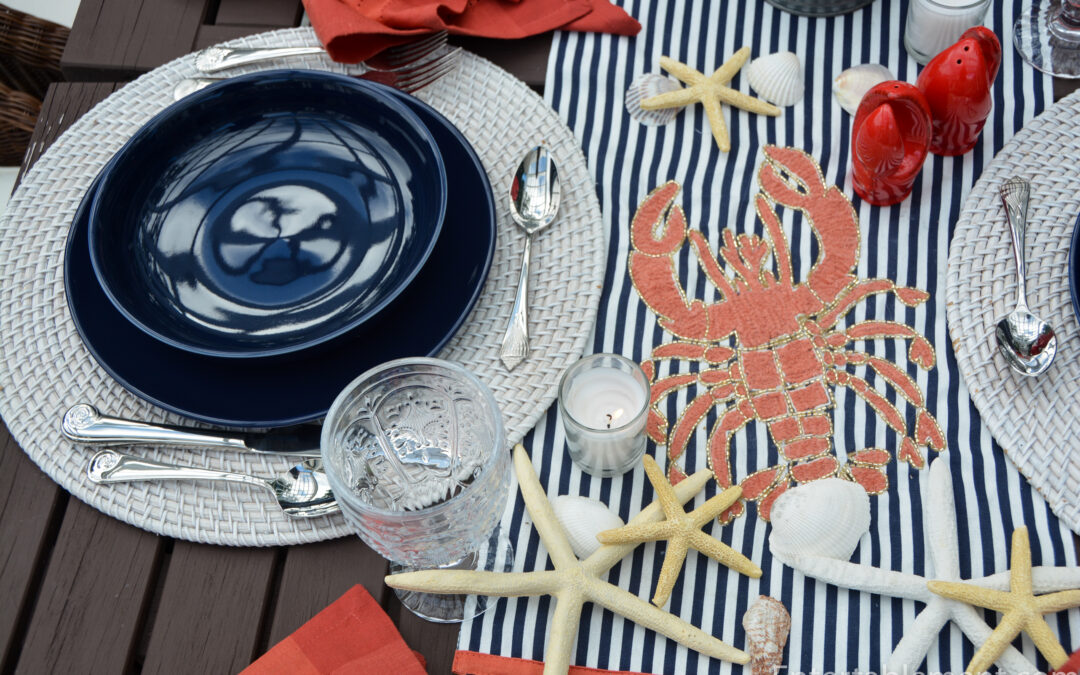 A refreshing wind is tossing the trees around this morning. Temperatures dropped about 10 degrees overnight, bringing welcome relief from the humidity. It’s late August – time to pack in all the “lasts” of summer – lobster rolls on the beach at sunset, evening drinks with friends on the back patio, sports car rides and picnics. 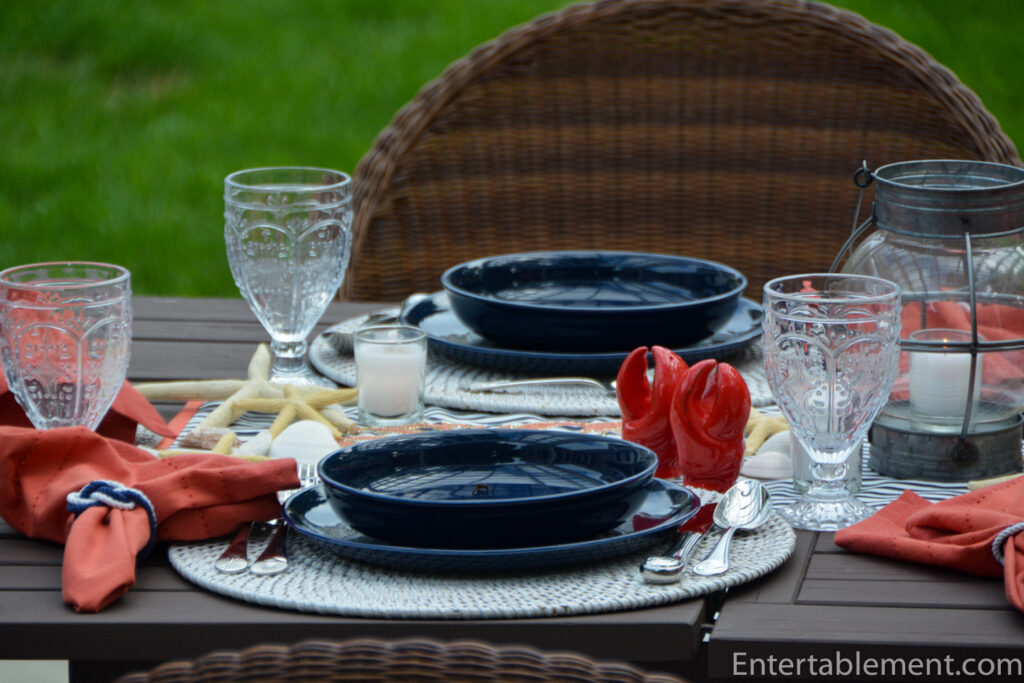 Speaking “lasts” and of lobster…one of Pier 1’s last offerings was this bejewelled table runner featuring a jazzy sequined lobster on a jaunty navy & white striped background. I rarely go in for sequins, but this little number was too good to pass up. 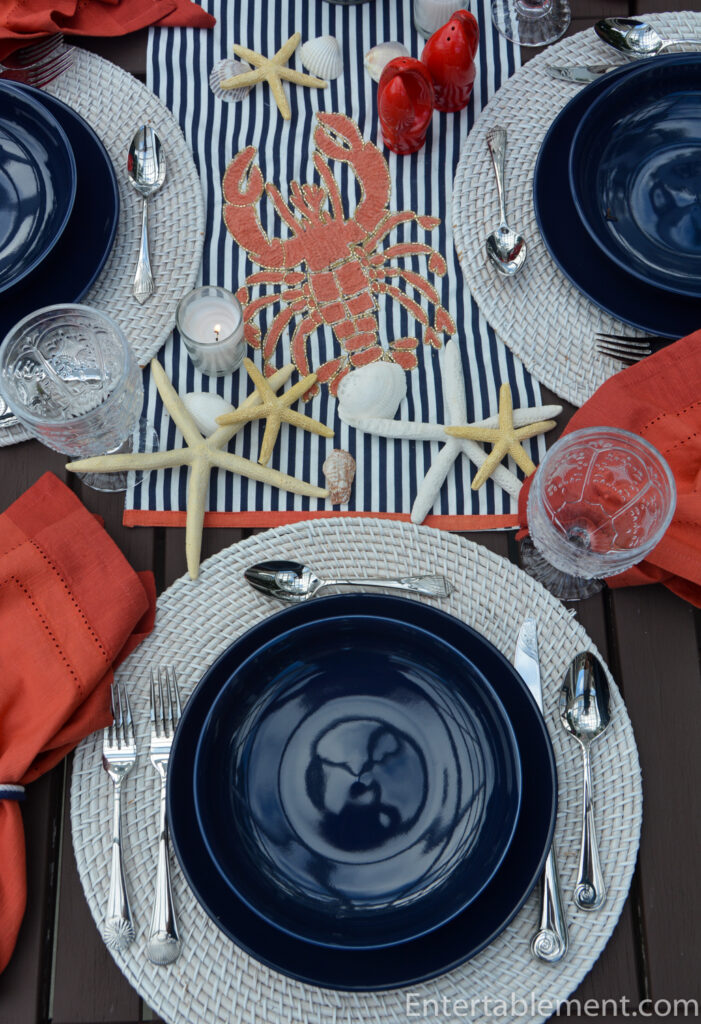 I set the table for photos while Glenn went off to the local fish market to “catch” a couple of steamed lobsters. I don’t mind dealing with dismembering them but draw the line at wrestling live lobsters into a pot of boiling water. Call me a wimp. Guilty. 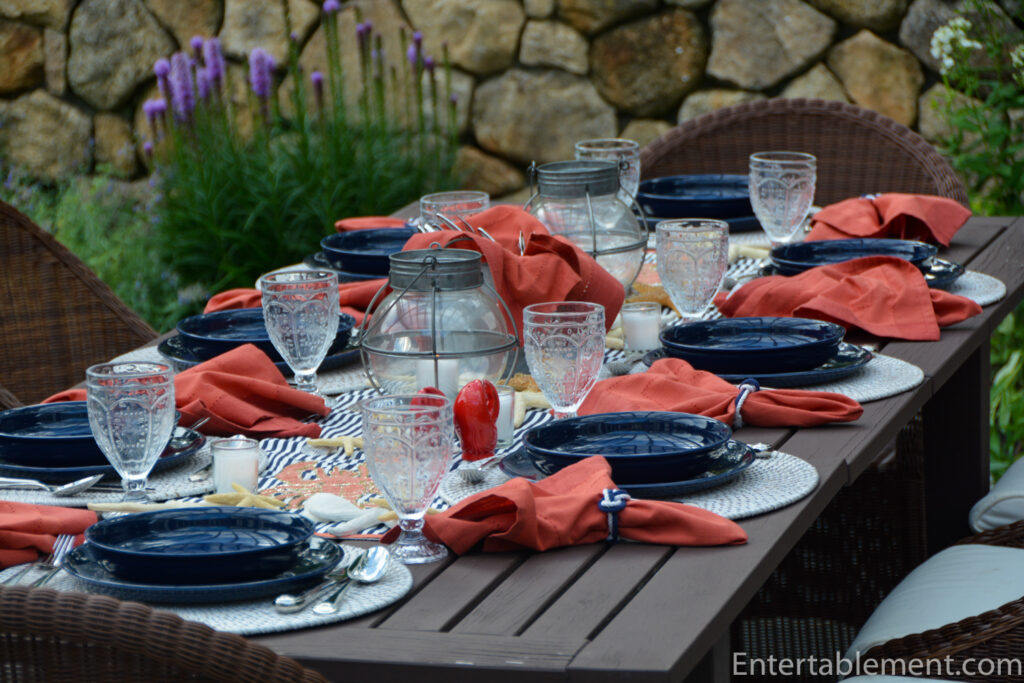 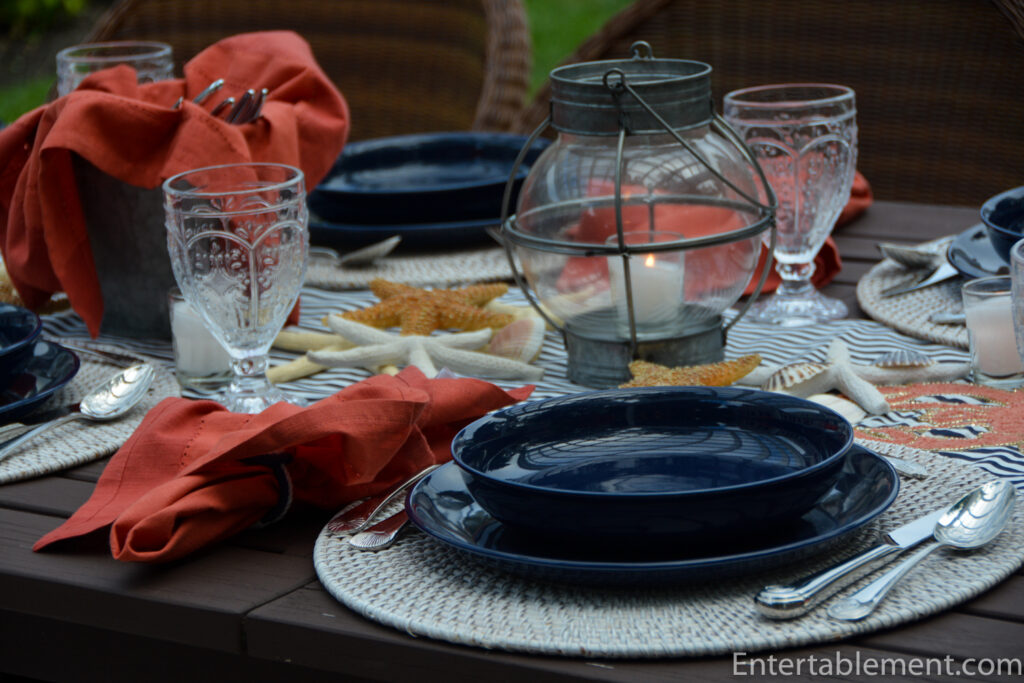 I broke out the seashell cutlery, too. It’s by Reed and Barton, and an eBay find. These are the salad and dinner forks, each with a different pattern. 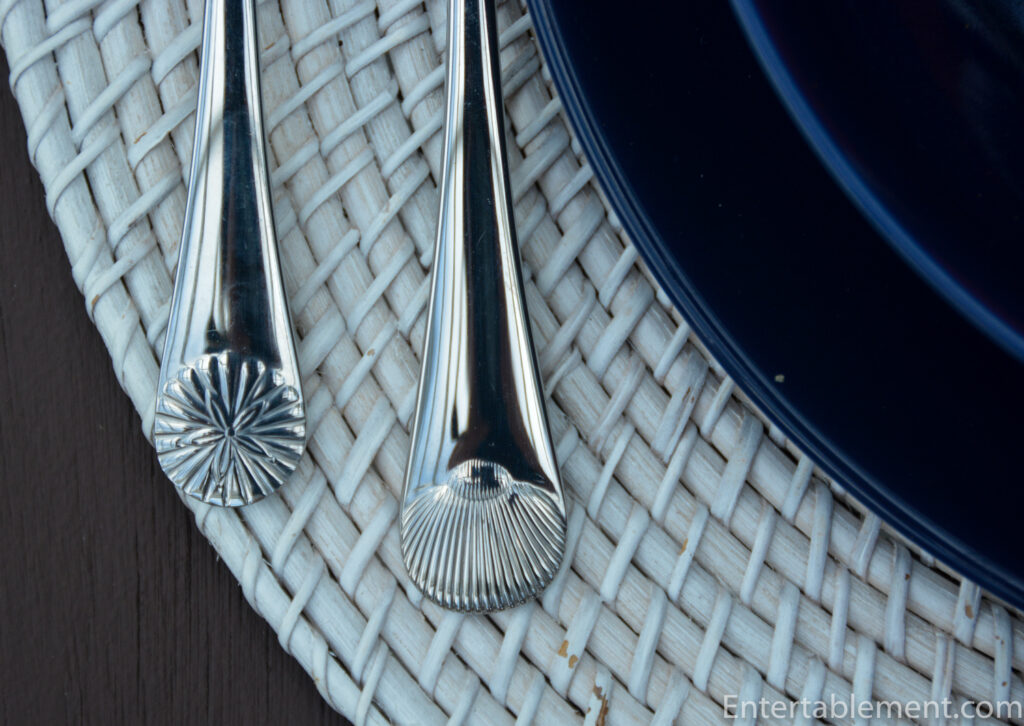 The knife and soup spoon both have the same motif. I don’t know why the designer used the same pattern for the two pieces that are often side by side. To me, it would have made more sense to have the teaspoon duplicate one of the other designs, if you’re going to have five pieces share four patterns. But no one asked me. 🙂 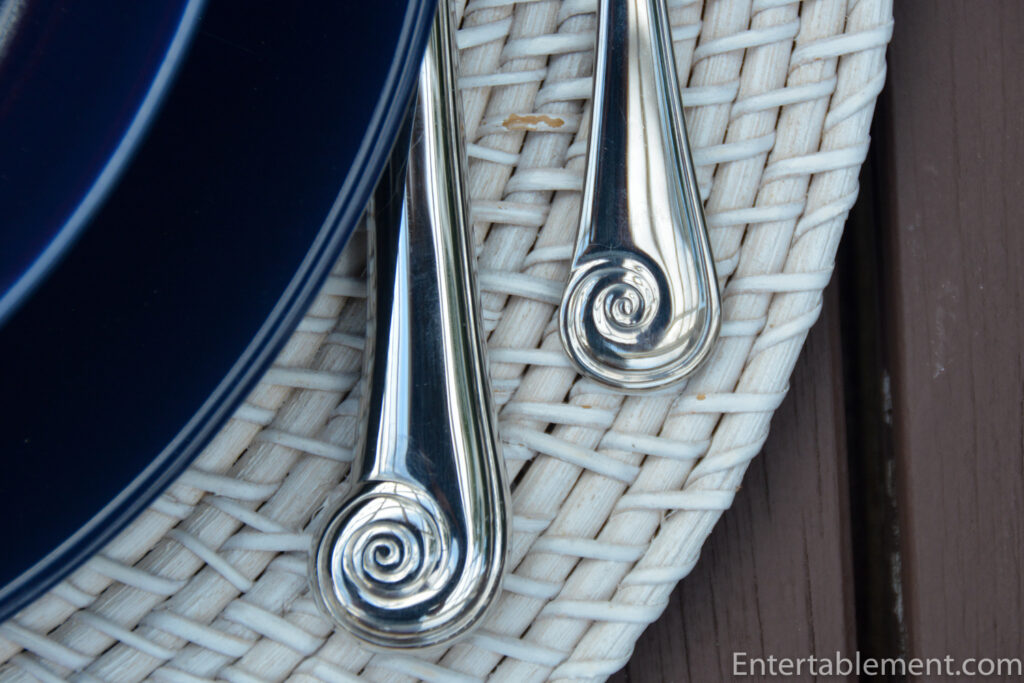 I didn’t get a closeup of said teaspoon, but it’s shown at the top of each place setting below. 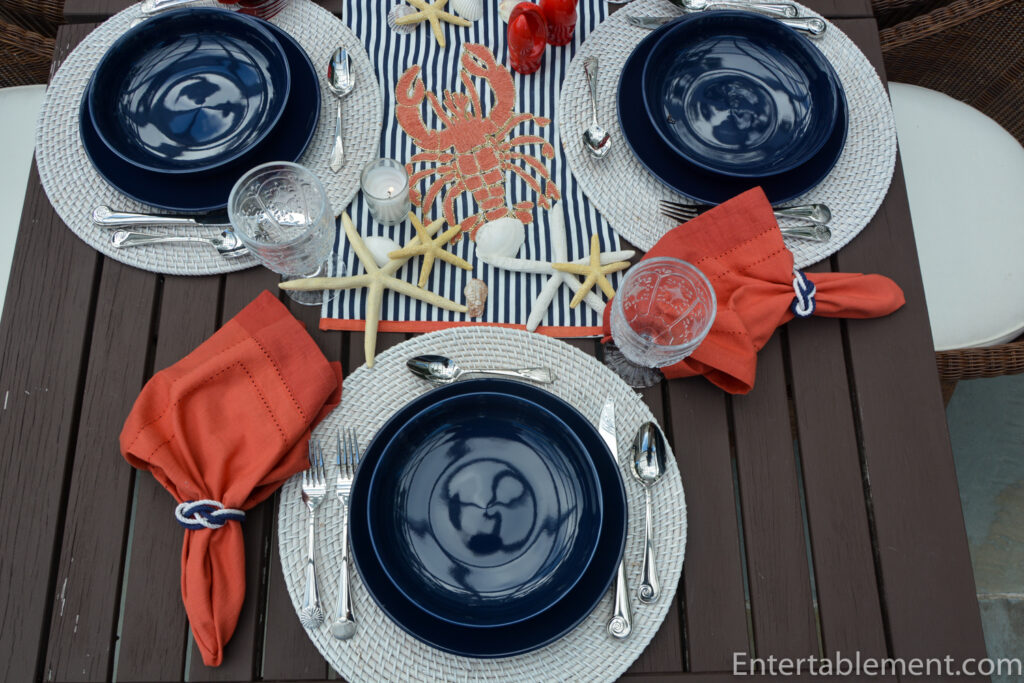 Here is a close-up shot from another table setting. The teaspoon has a lovely, whirly shell. 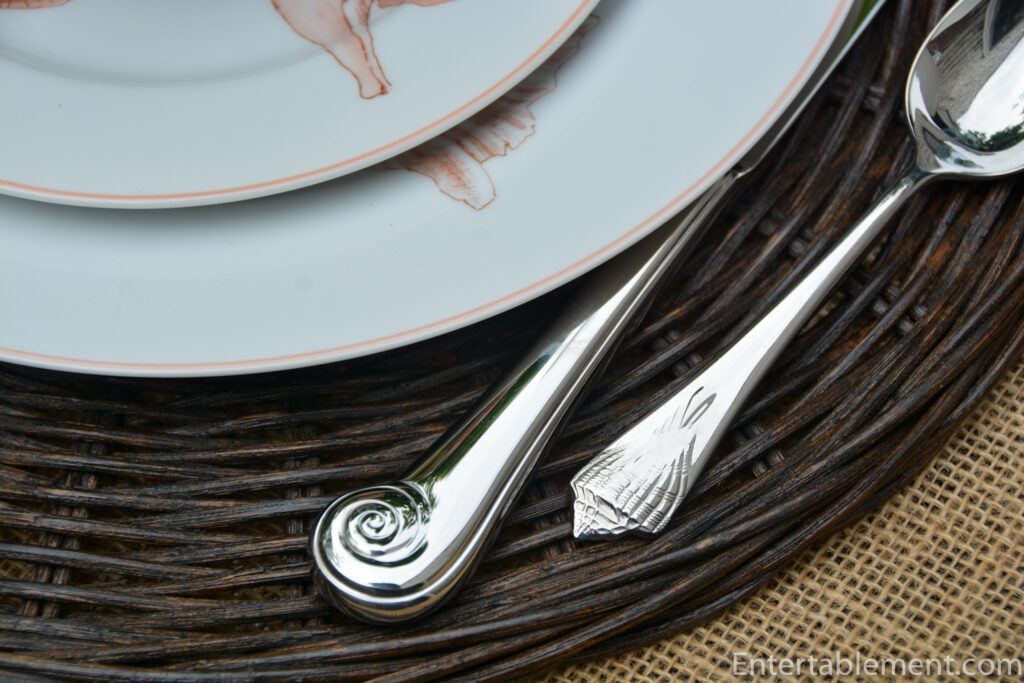 Though the sequined lobster on the runner is closer to coral than orange in colour, the orange napkins picked up the tone well and gave the table additional lift. 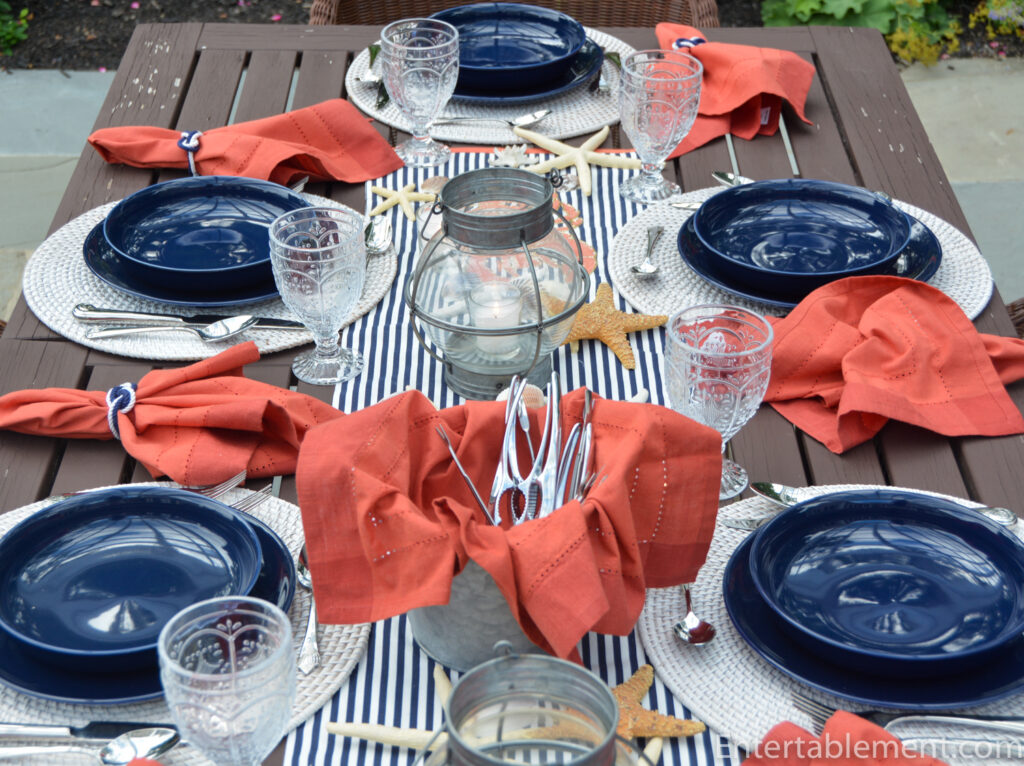 The lobster claw salt and pepper shakers were also from Pier 1, but several years ago. 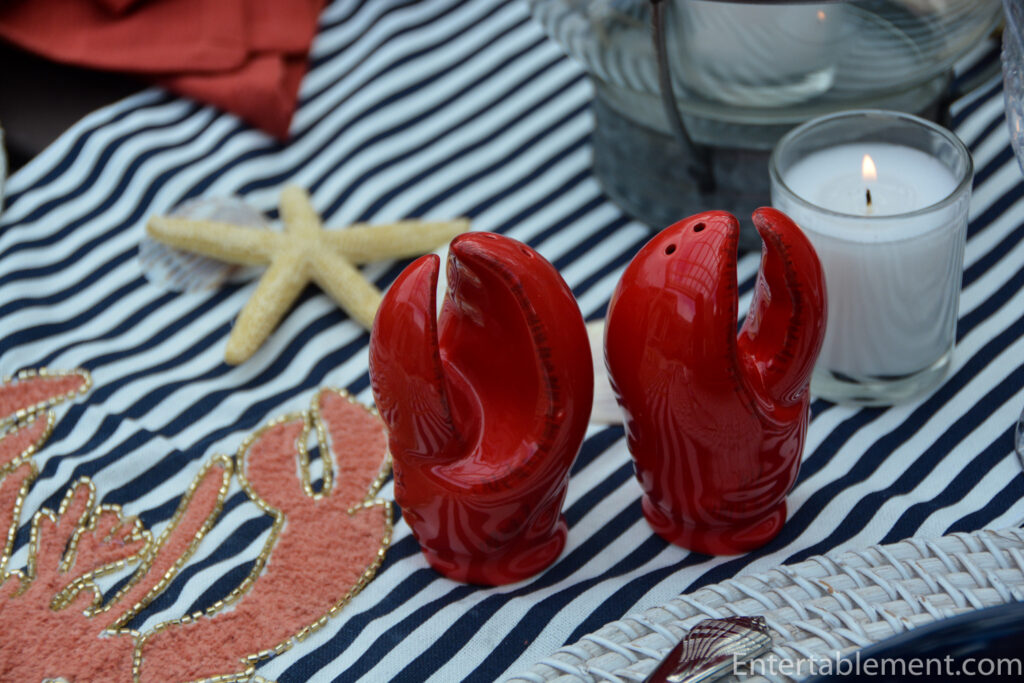 The nautical knots napkin rings were a fun touch and picked up the navy and white theme. The dinner plate and pasta bowl are Pacifica from Williams Sonoma and still available. 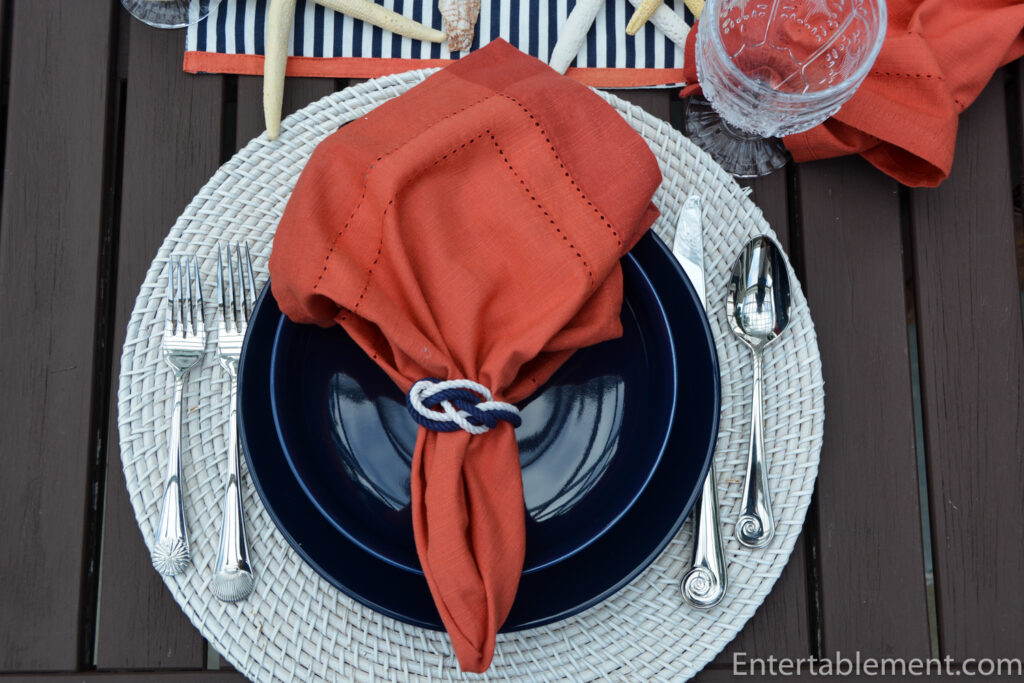 I see they’ve added a deep, double-handled soup bowl to the collection. It looks like a great piece, perfect for thick soups or stews. Yum. 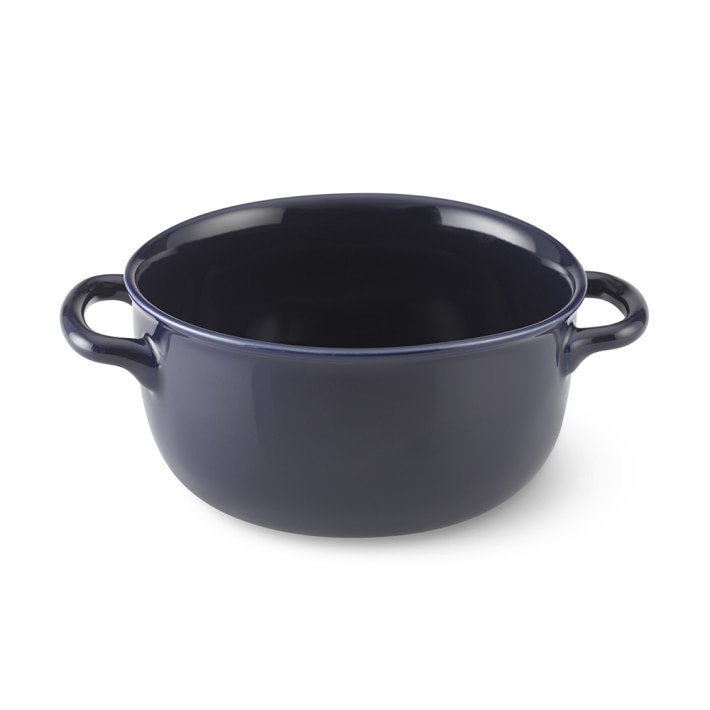 It’s enjoyable to look at shots of the garden when it was at its best. It’s looking quite tatty and frayed around the edges now. The poor hydrangeas have taken on their end of season faded look. The signature bright blue colour didn’t last long this year with the intense heat. 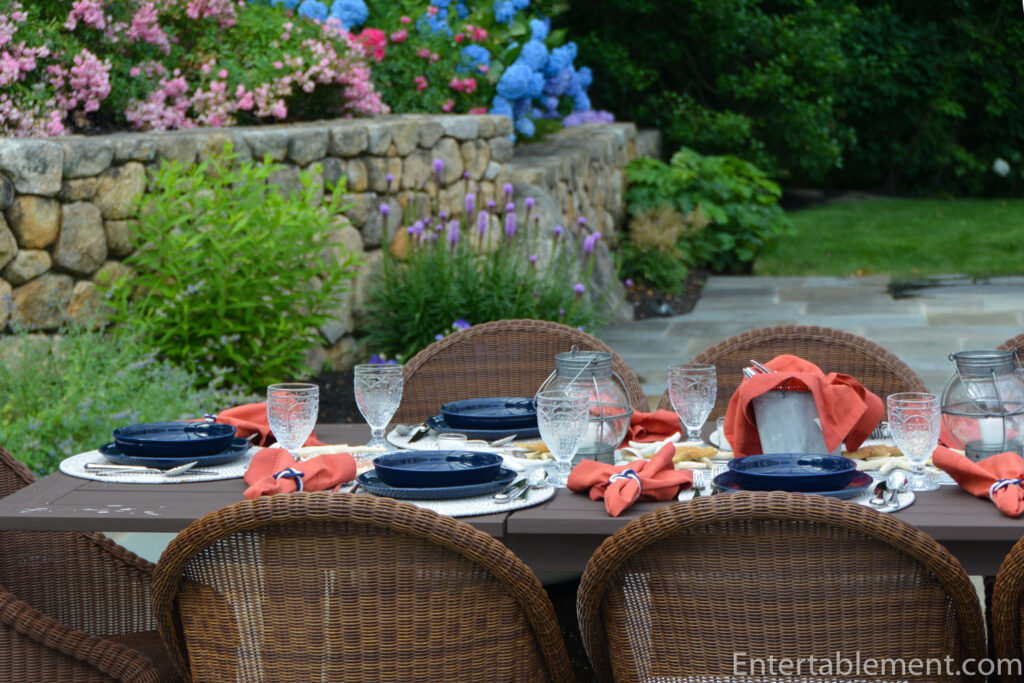 It was a beautiful evening. 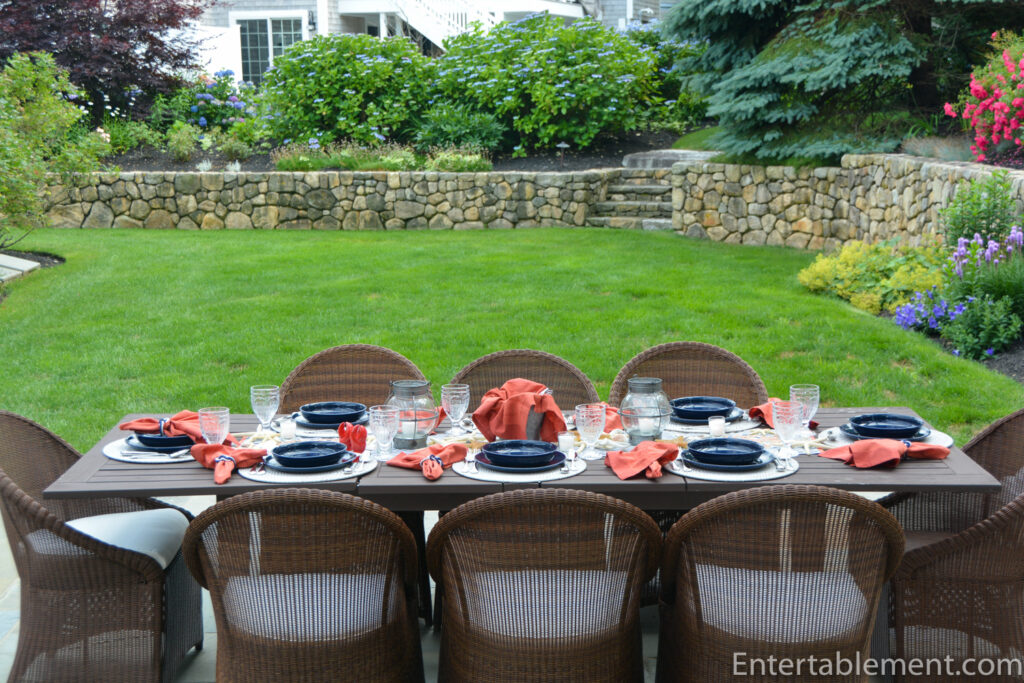 Once I’d taken the shots, I removed four place settings so we could have a proper socially-distanced dinner with another couple. It’s one of the benefits of a large table and being able to dine outdoors. It’s going to get trickier when the weather changes, but no doubt, we will manage.

The recipe for lobster risotto is in a separate post. 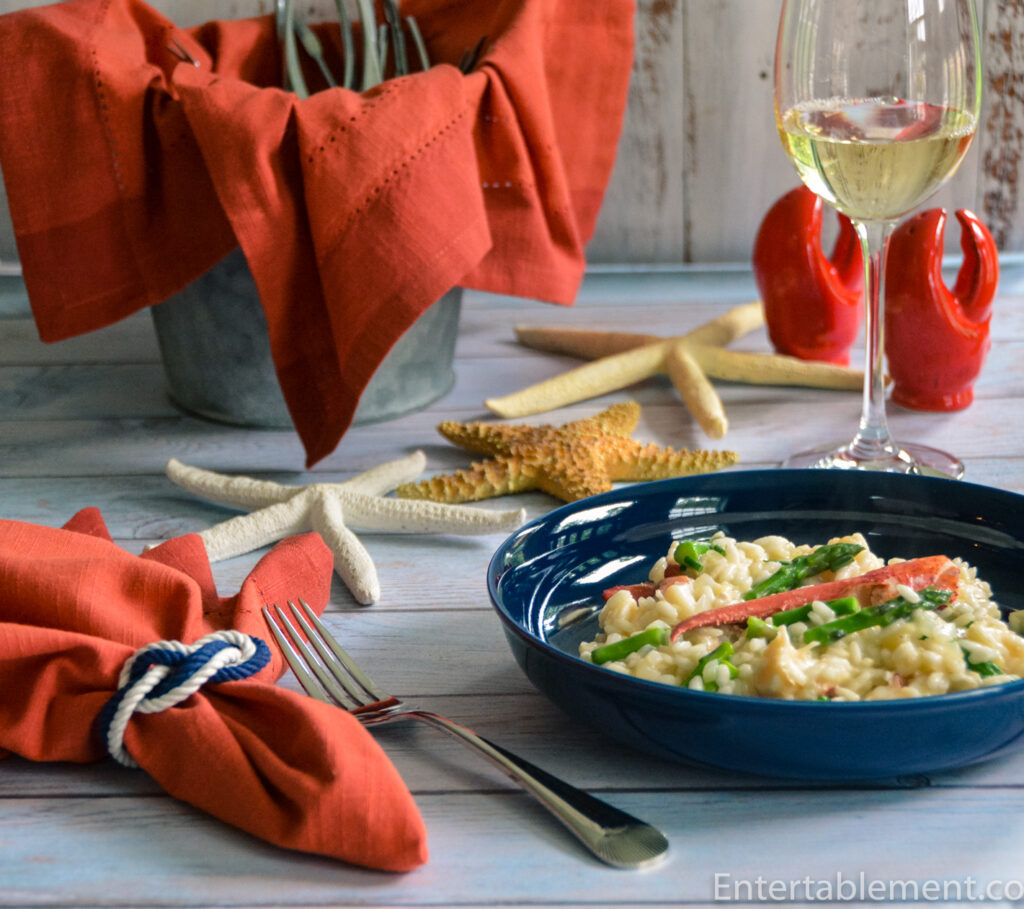 While I’m always sad to see the lazy, crazy days of summer come to an end, I’m also looking forward to crisp fall days, the new crop of crunchy, fresh apples and fires in the fireplace. We laid in a full cord of firewood this week, which is now neatly stacked, awaiting our return. Back in Canada, we have enough firewood to stock an army. Sadly, we have had to take down ten big trees due to a combination of storm damage and trees dying from the Ash Borer, and Glenn has split and stacked piles of wood, gradually moving it from the back of the property up closer to the house. There’s still a lot left to do. 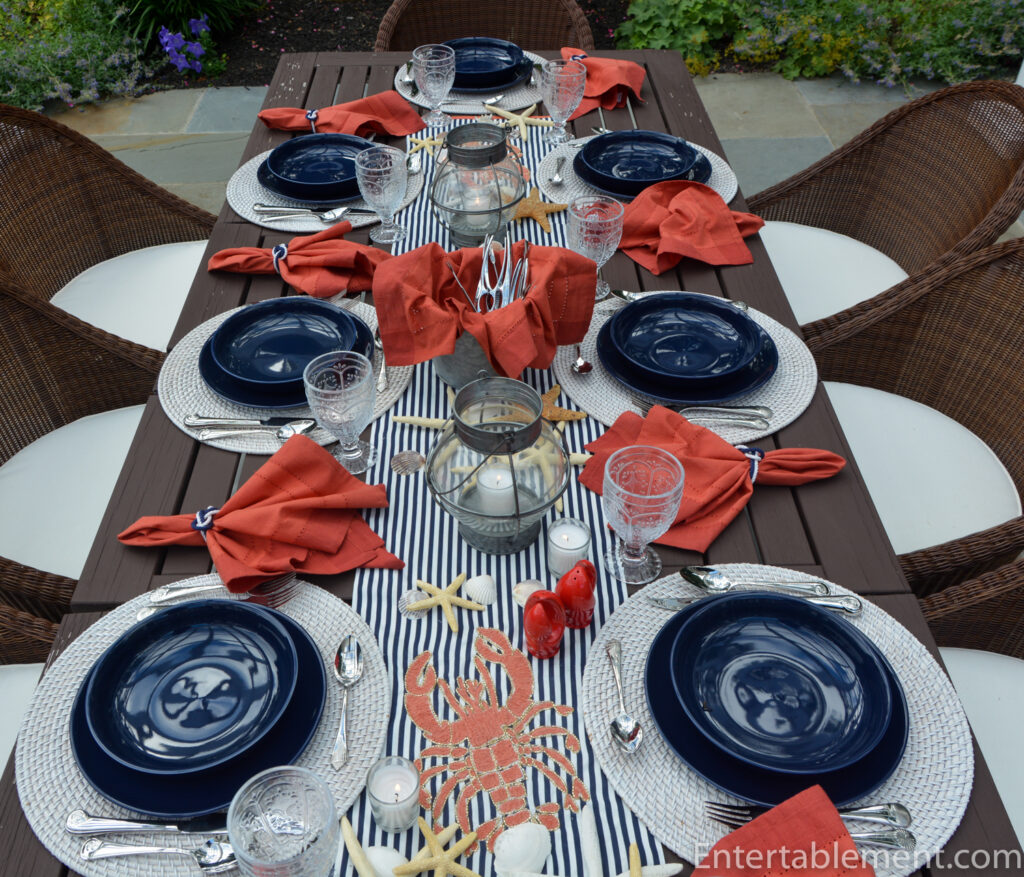 Speaking of preparing for changing seasons, I’ve been experimenting with various bread recipes and techniques this past little while. Yeast had intimidated me for a long time, but it’s now friend, rather than foe. We broke the ice with European Sweet Bread, 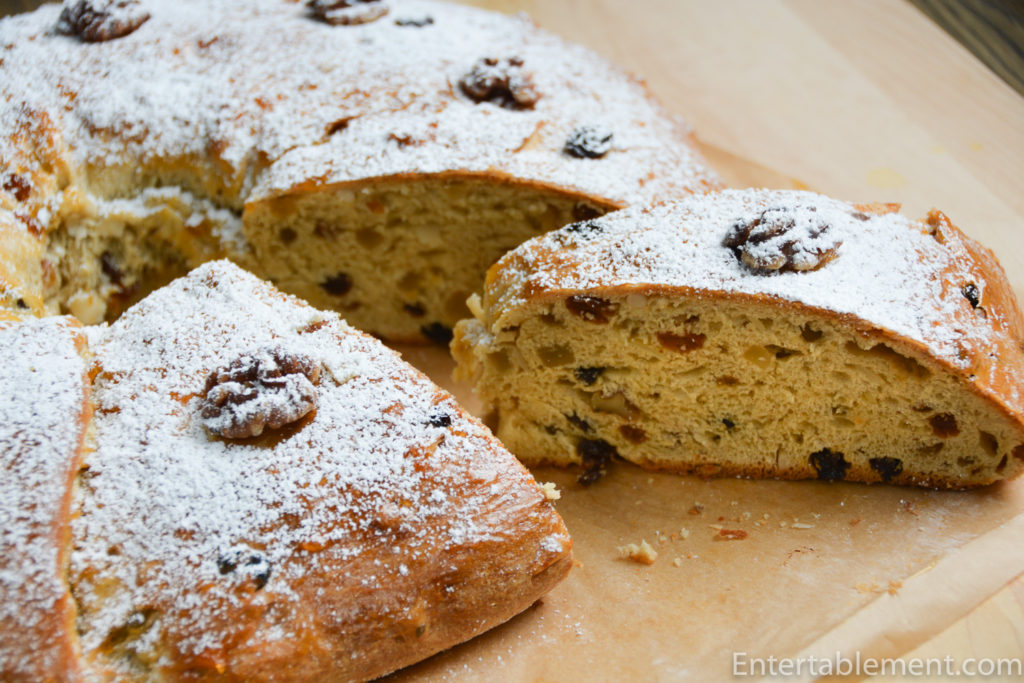 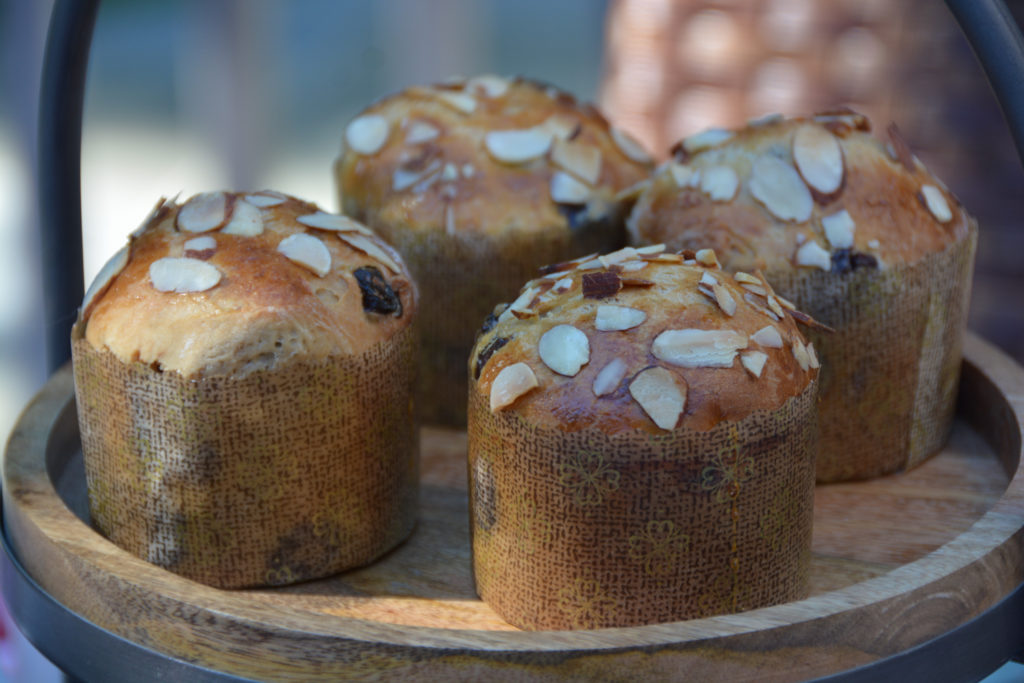 and I moved on to the Baklava pull-apart bread. 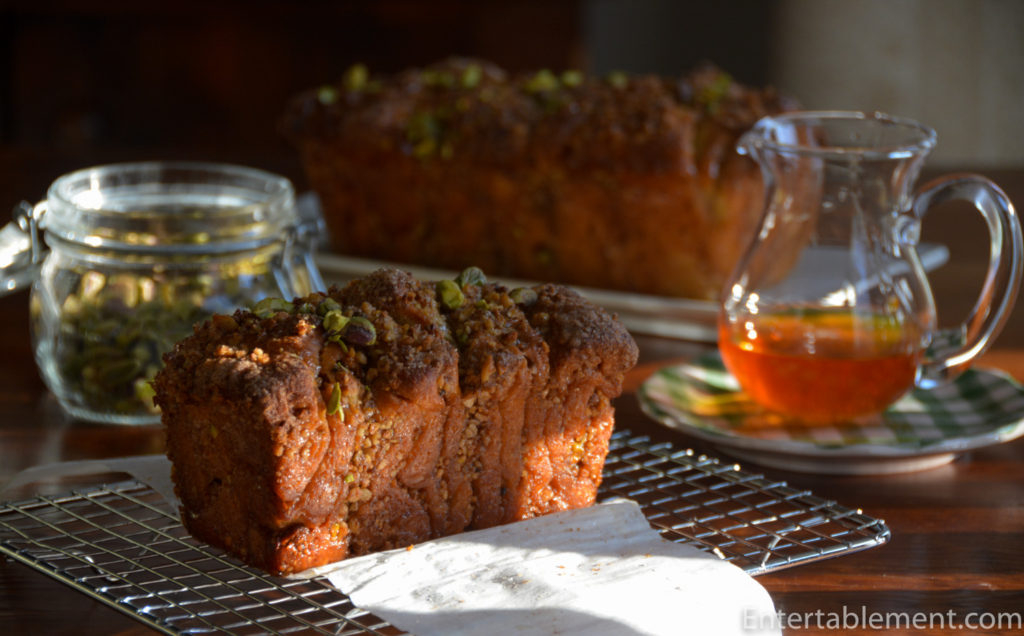 This past couple of weeks, I have made a cinnamon apple twist bread, a no-knead Harvest loaf and a Tuscan coffee cake, all recipes from King Arthur Baking. Neighbours have been happy recipients of the excess, and I’ve put some aside in the freezer, too. Nothing like a little nosh laid by in anticipation of future indulgence! Stay tuned for pics, as soon as I get a chance to process them.

I’ll leave you with a shot of Diabolical Dundee who has been “helping” me change over the kitchen for fall. He quite likes his “I’m the King of the Castle” perch, and will no doubt be disappointed when it is returned to the basement. 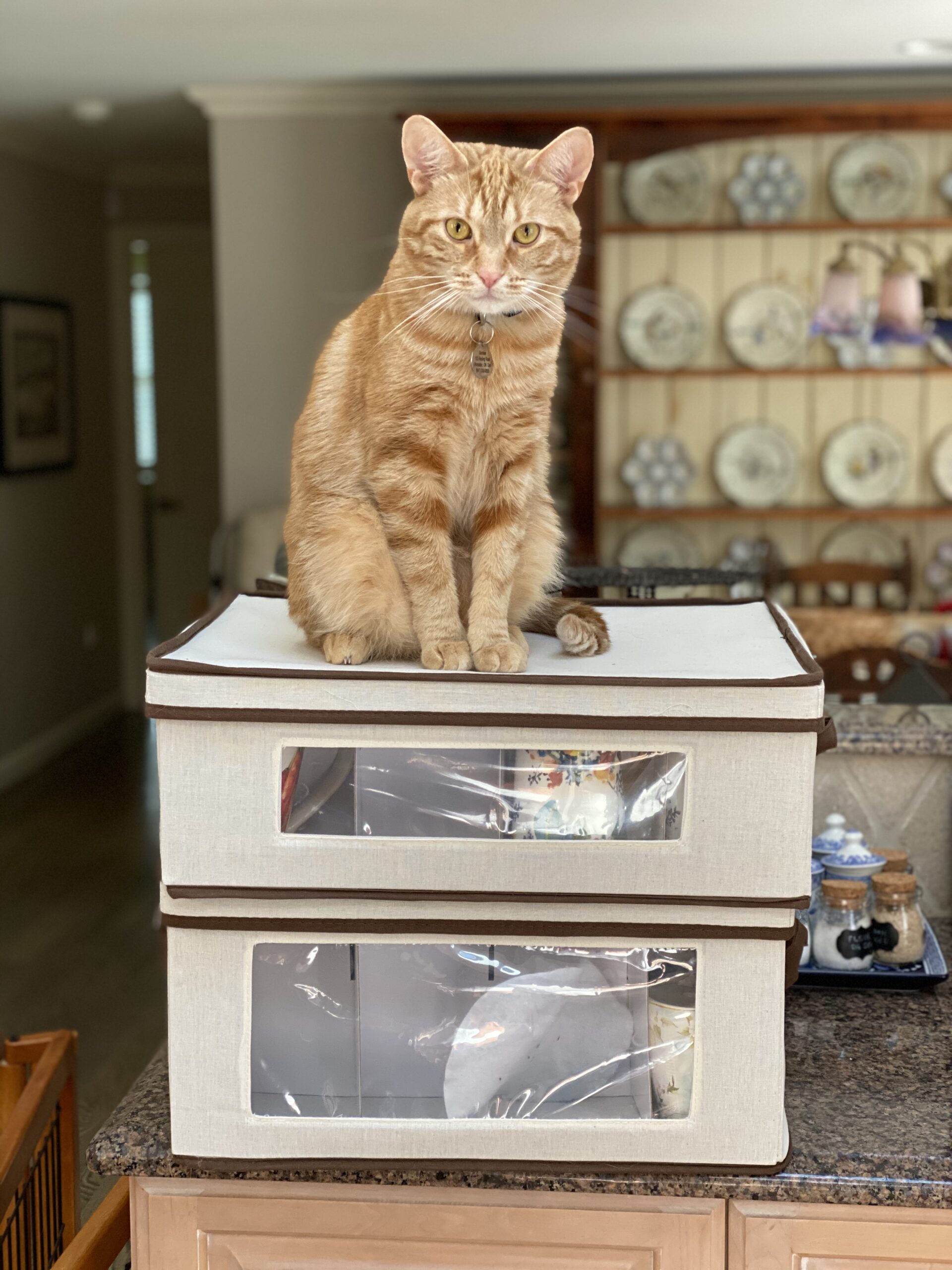 Have a great day, everyone! Enjoy our precious few last weeks of summer.