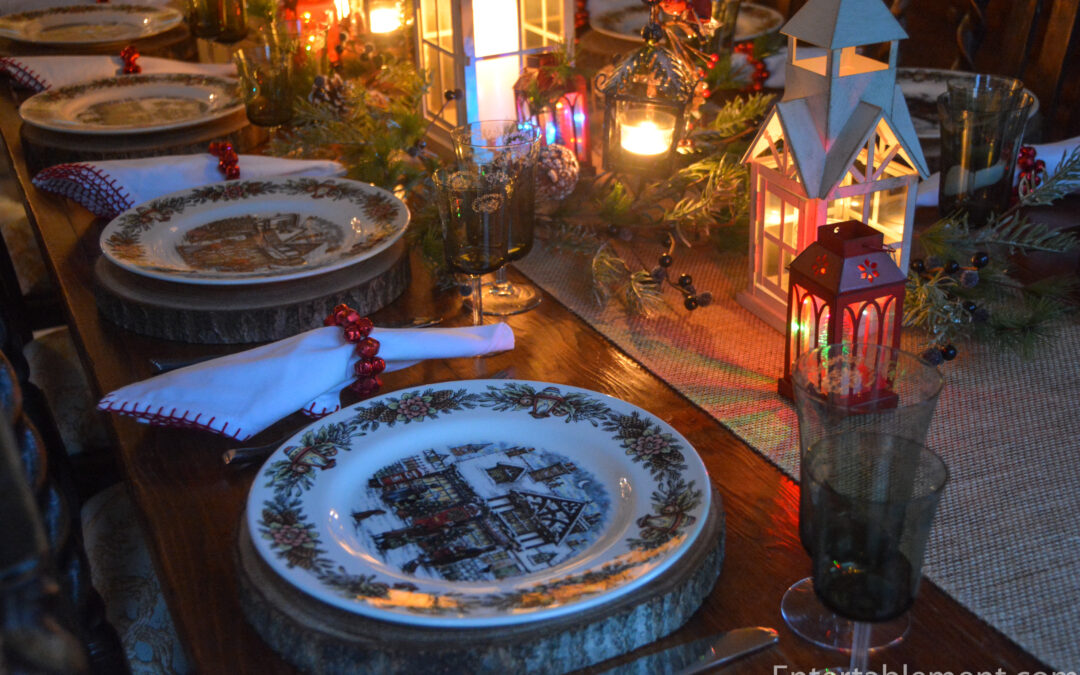 There is something infinitely appealing about an old-fashioned Christmas scene, with half-timbered houses, ladies in bonnets and long skirts, and wait … what is that cart? 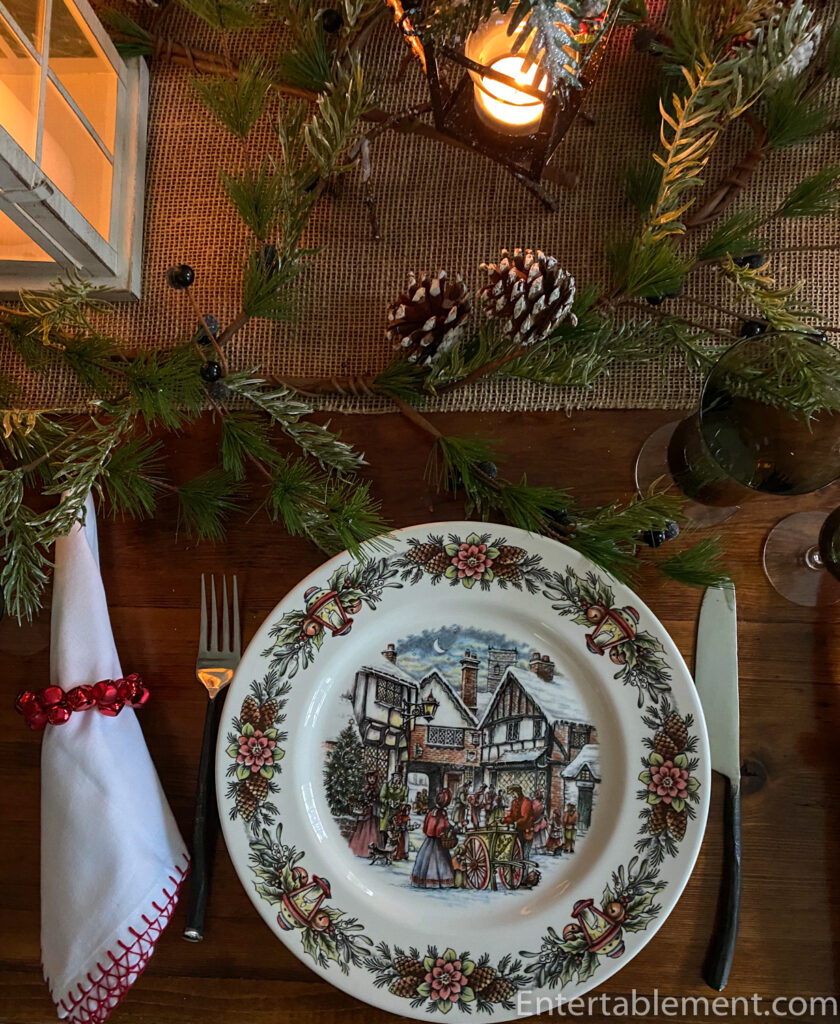 Carol singers, people exchanging greetings, the decorated tree and a happy dog are all very charming. But we have a Hot Chestnut vendor! What an unexpected touch. 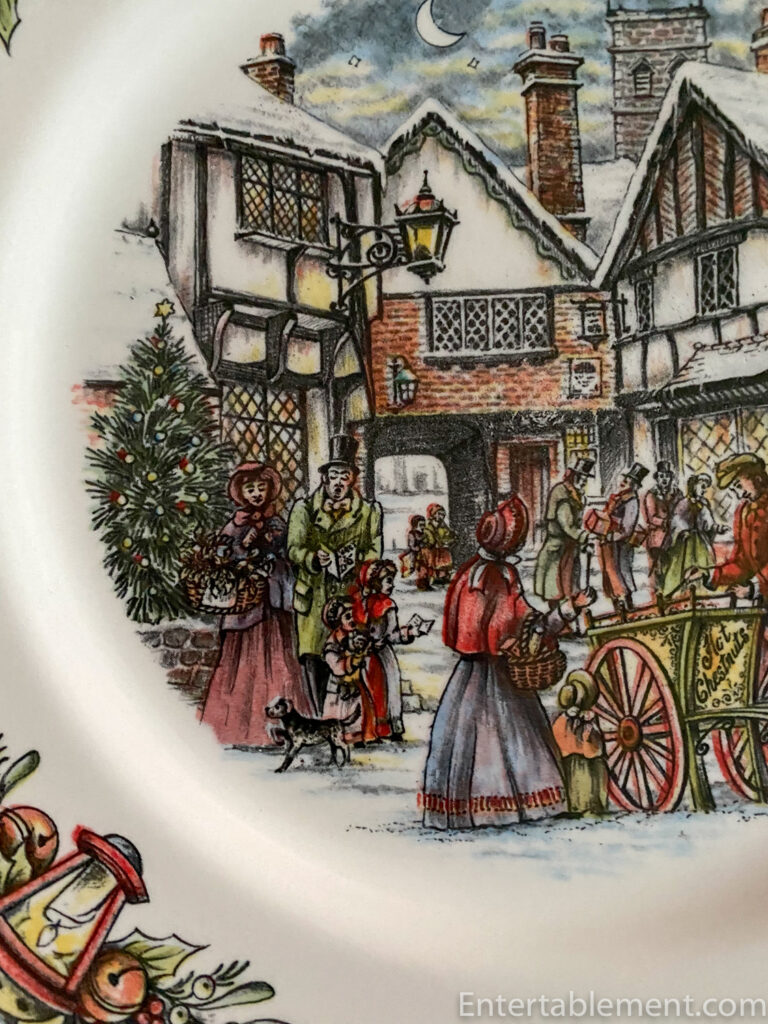 The plates were described on eBay as Royal Stafford Christmas Village. However, it wasn’t until l searched out the pattern at Replacements.com that I realized it’s called Hot Chestnut Seller, produced in 2020 by Royal Stafford. It follows the 2019 production of Christmas Toy Shop. 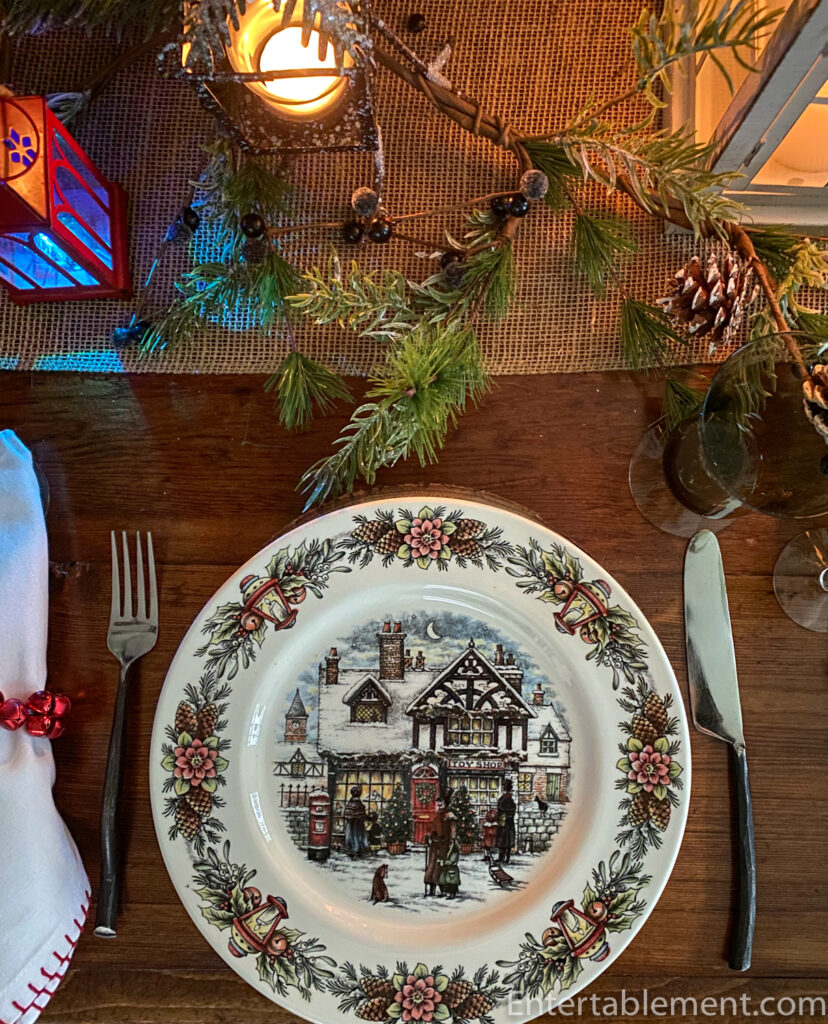 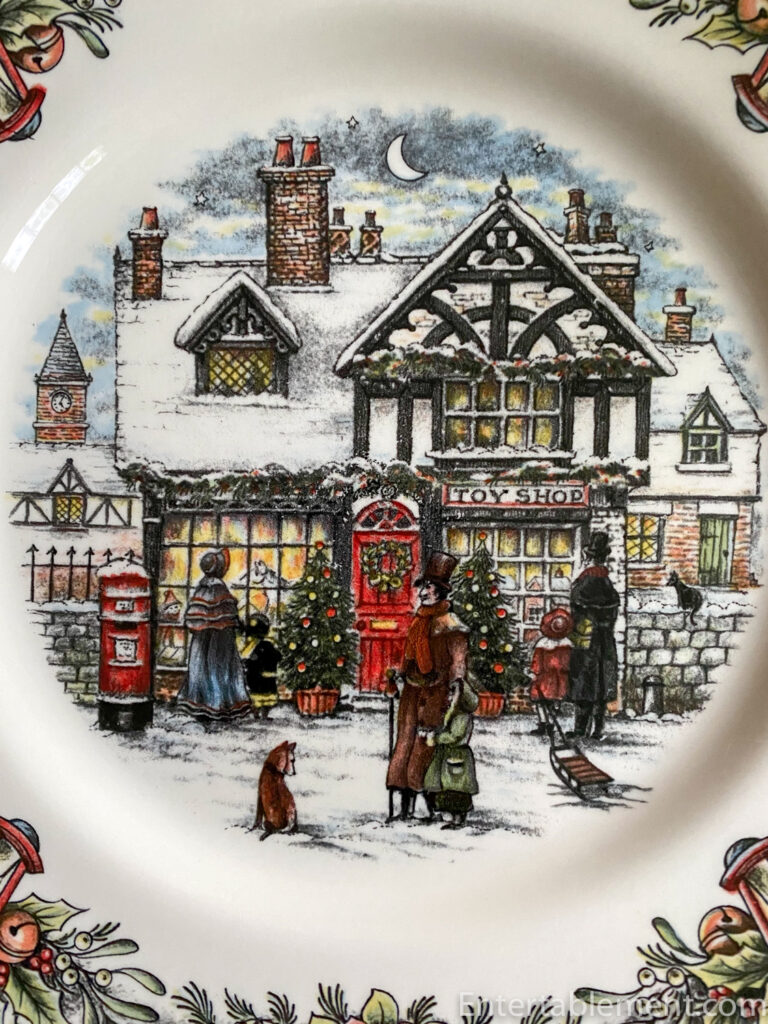 The common feature on the plates is the lantern border on a white background. Royal Stafford has several other Christmas plates with black background borders, but these have a refreshingly light take on a traditional theme. 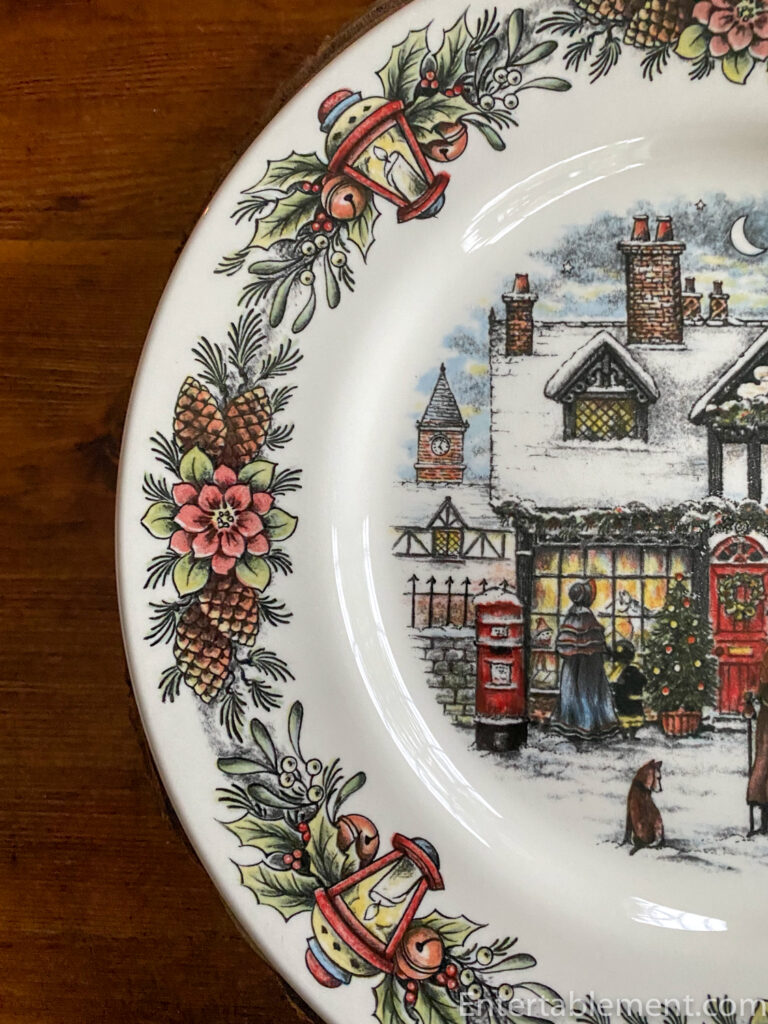 All right, then. Lanterns it is! I dug out the more prominent white church lanterns for the centrepiece and scattered smaller red ones among them. 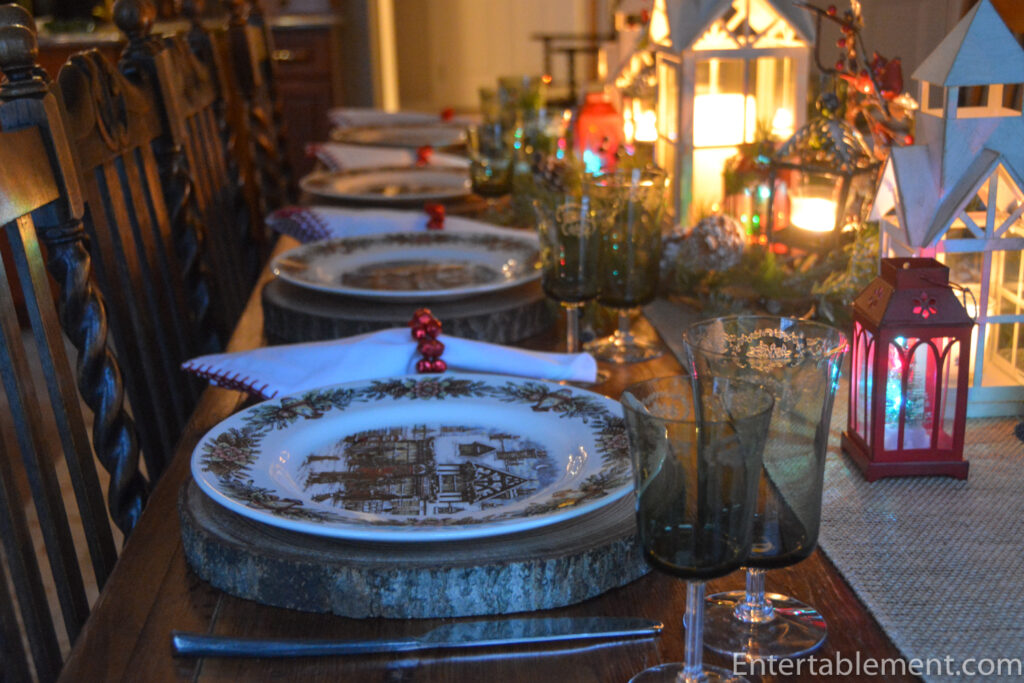 A relatively sparse garland of pine branches and pinecones echoed the simplicity of the border on the plates. 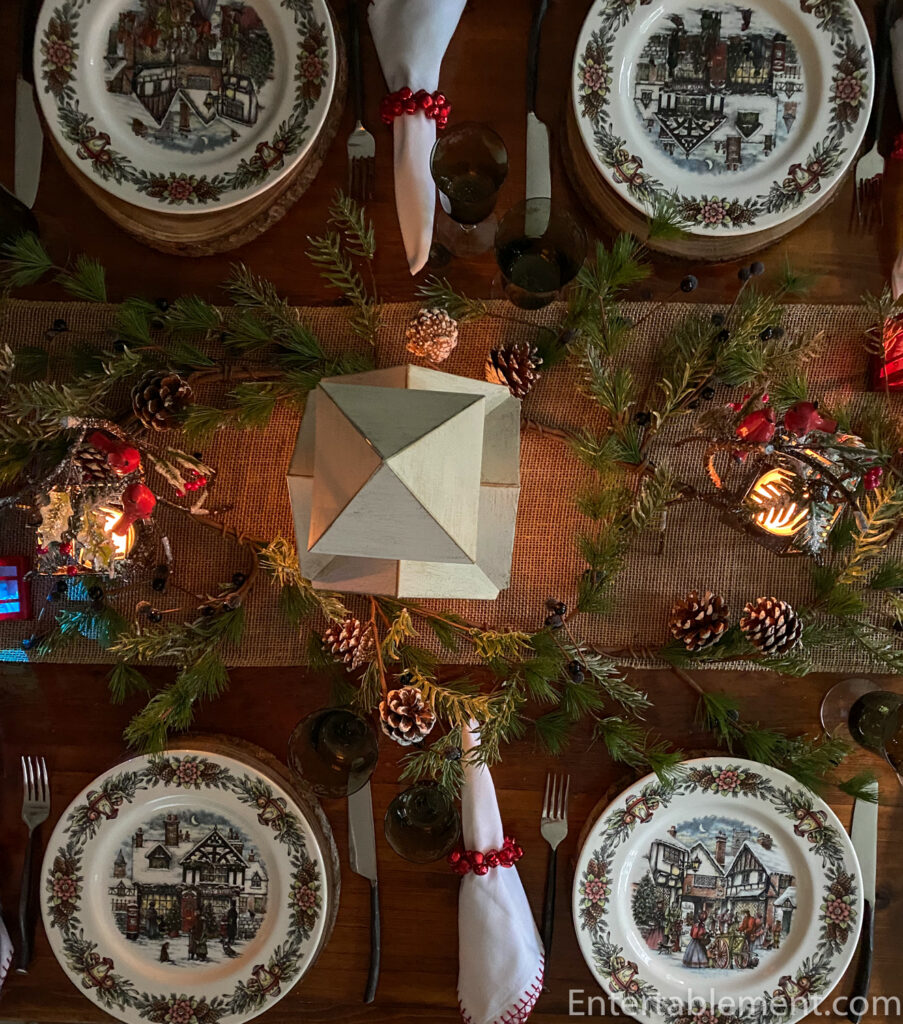 A few years ago, Pier 1 produced the hanging lanterns with cardinals perched on top. They most closely echo the ones on the border, don’t you think? 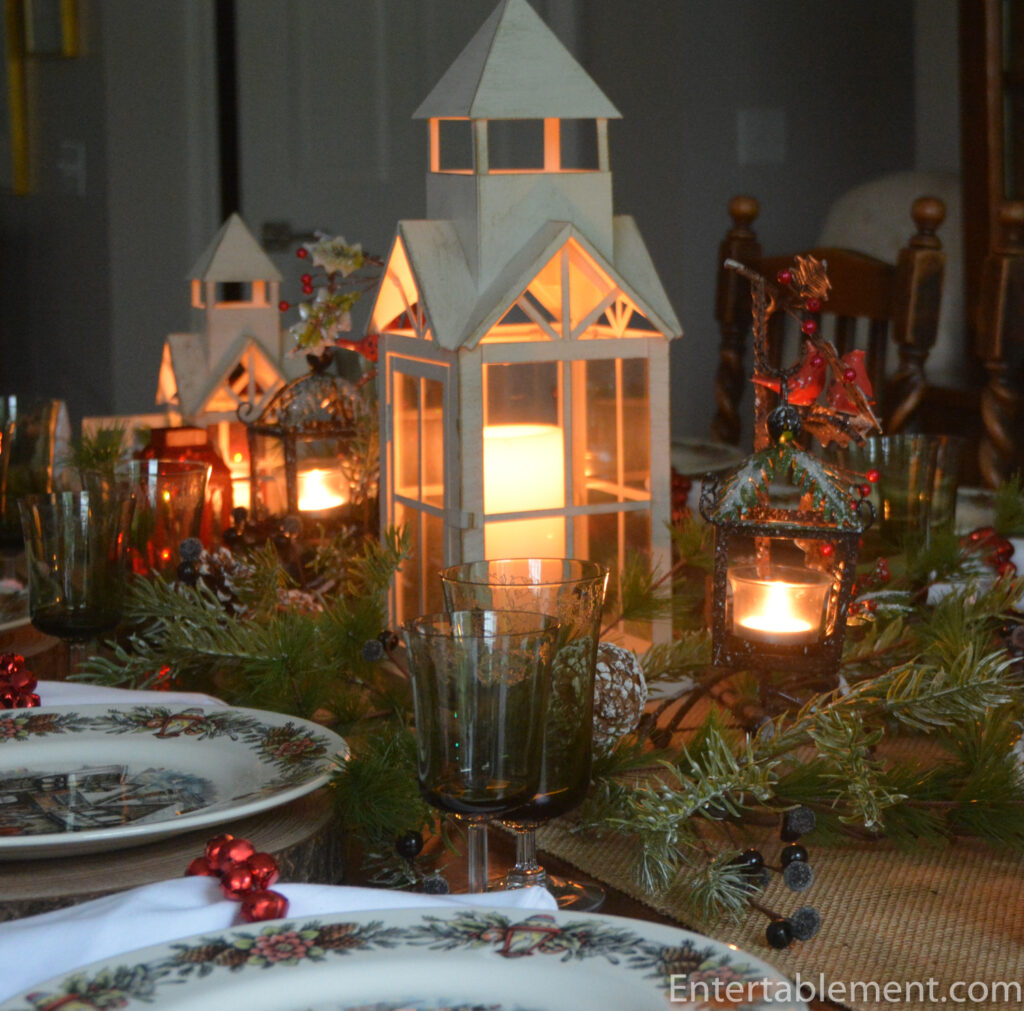 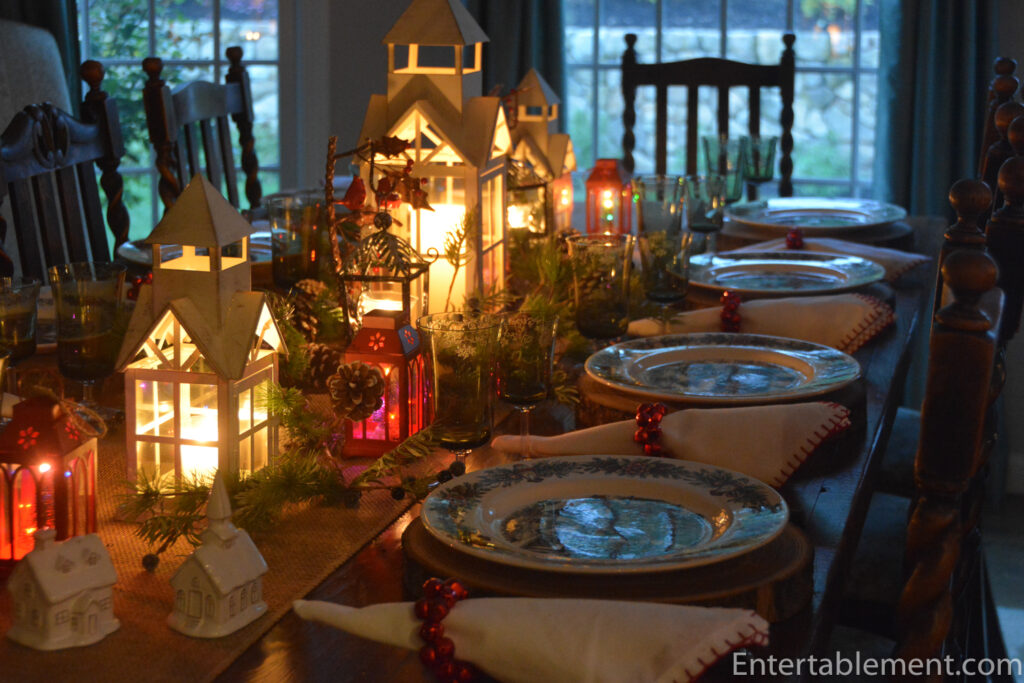 Cameo Green glasses by Fostoria resemble Depression glass but are from the 1970s. Their subtle, mossy colour fits right in with the subdued tones of the table. 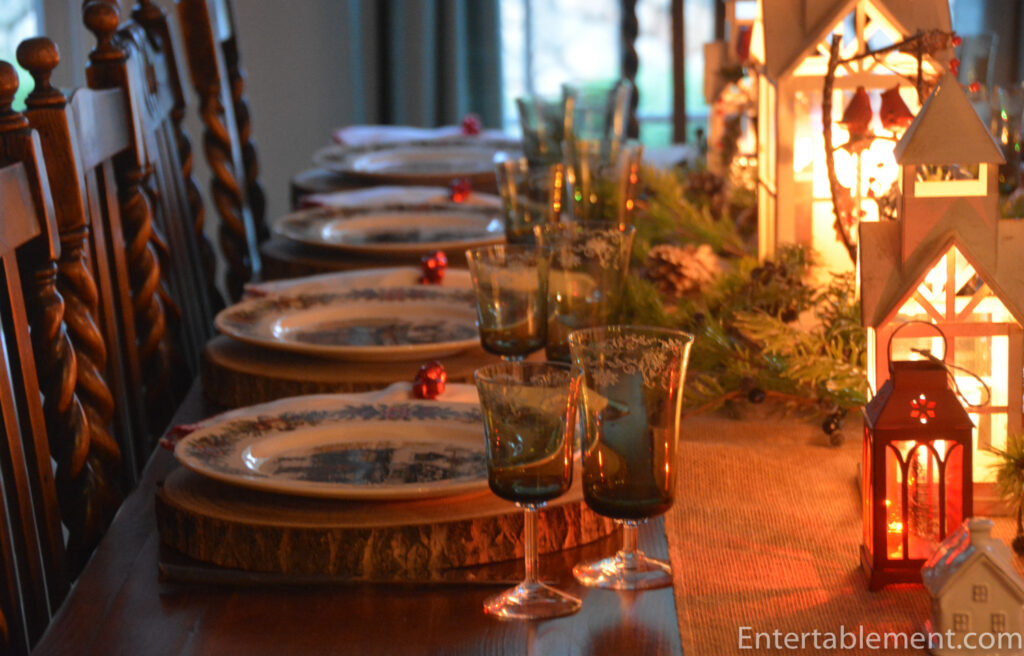 White napkins with a red blanket-stitch edging are held in place by napkin rings made of jingly red bells. 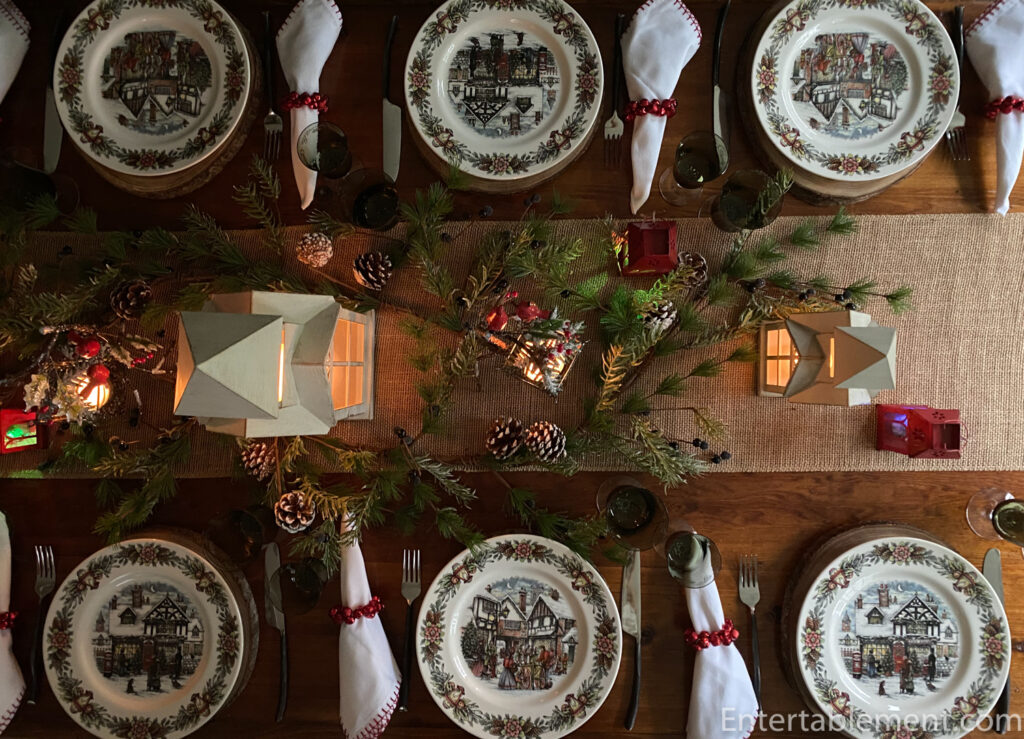 The final detail is the salt and pepper shaker set – a church and a house. 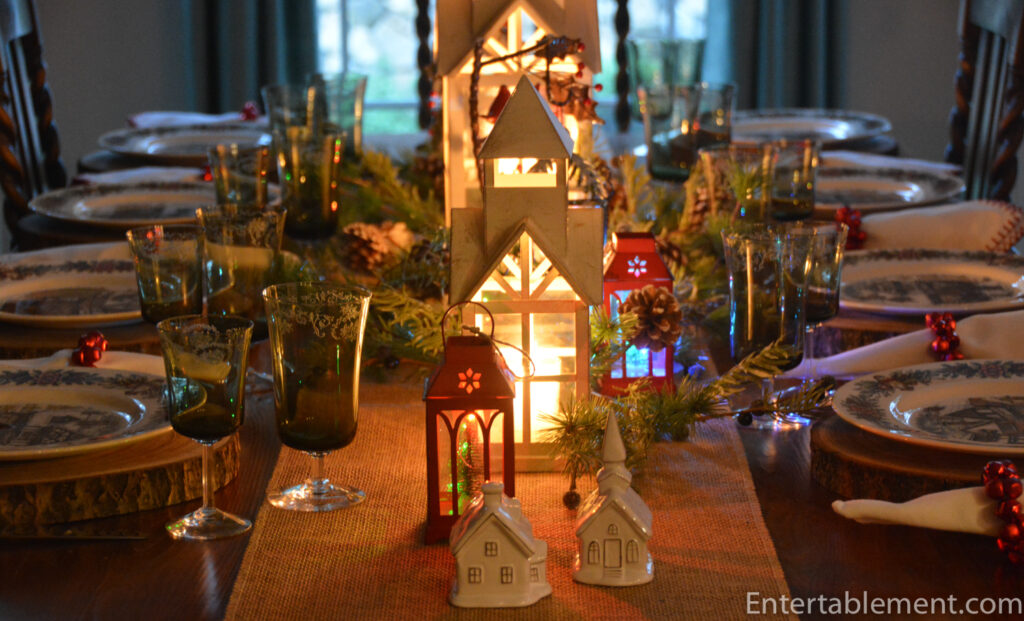 All set for an old-fashioned Christmas.

Next weekend is cookie-baking time with the grandgirls. I will whip up a batch of Danish Butter Cookie dough this week and get some of it cut out and baked ahead of time. 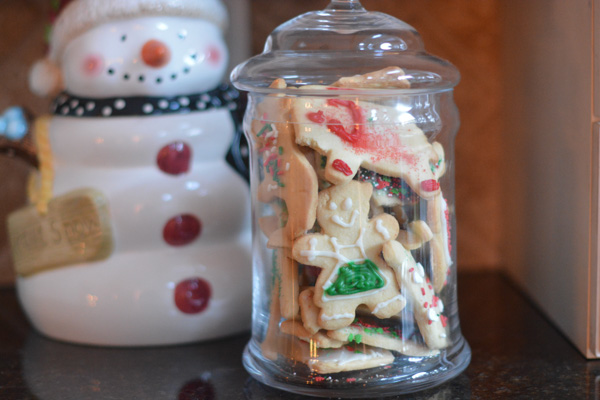 That way, the girls can get right into decorating while I roll out and bake the rest of it—attention lasts only so long. I was amazed at how adeptly the little ones handled piping bags filled with Royal Icing when we decorated cookies last year. It was very amusing to note that the littlest one, Riley, lasted the longest. She was still hard at it long after her older cousins and sibling had abandoned the task and moved on to playing downstairs. The IKEA craft table from the basement (where it also serves as wrapping central) gave everyone their decorating space. The surface is indestructible, and the dogs were more than happy to vacuum up any spilt sprinkles. 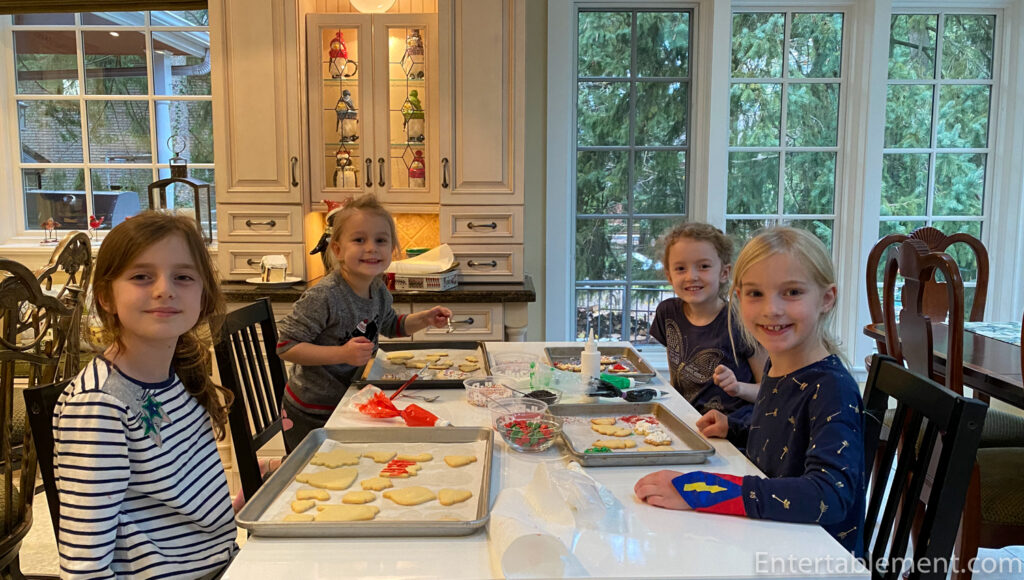 One more picture of the table. 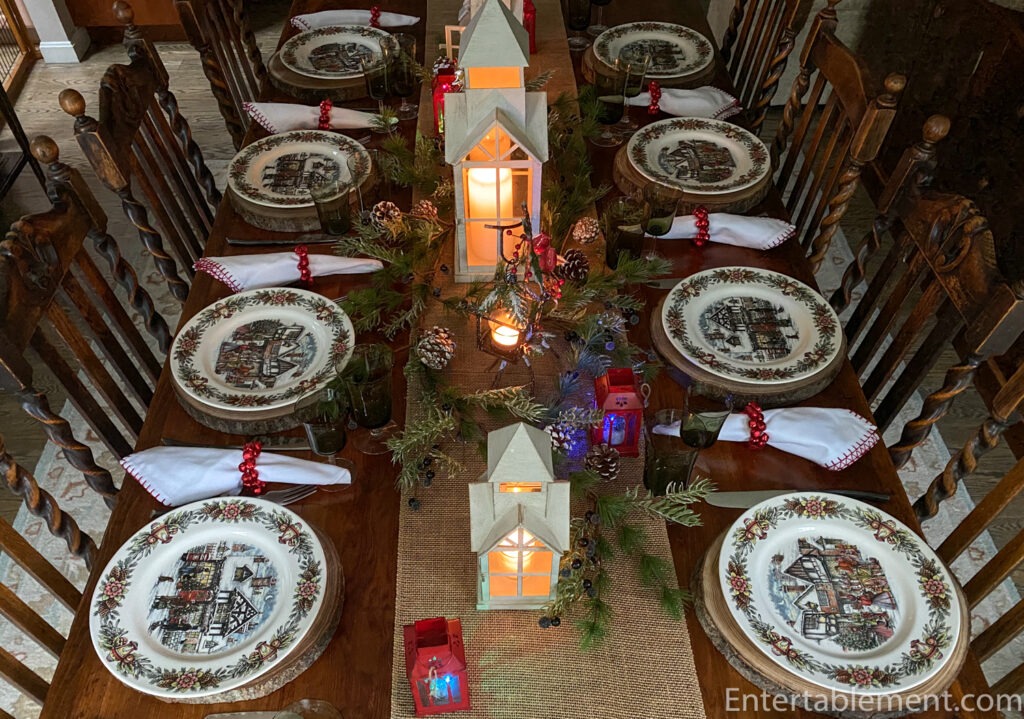