It’s a Full Nest for Easter 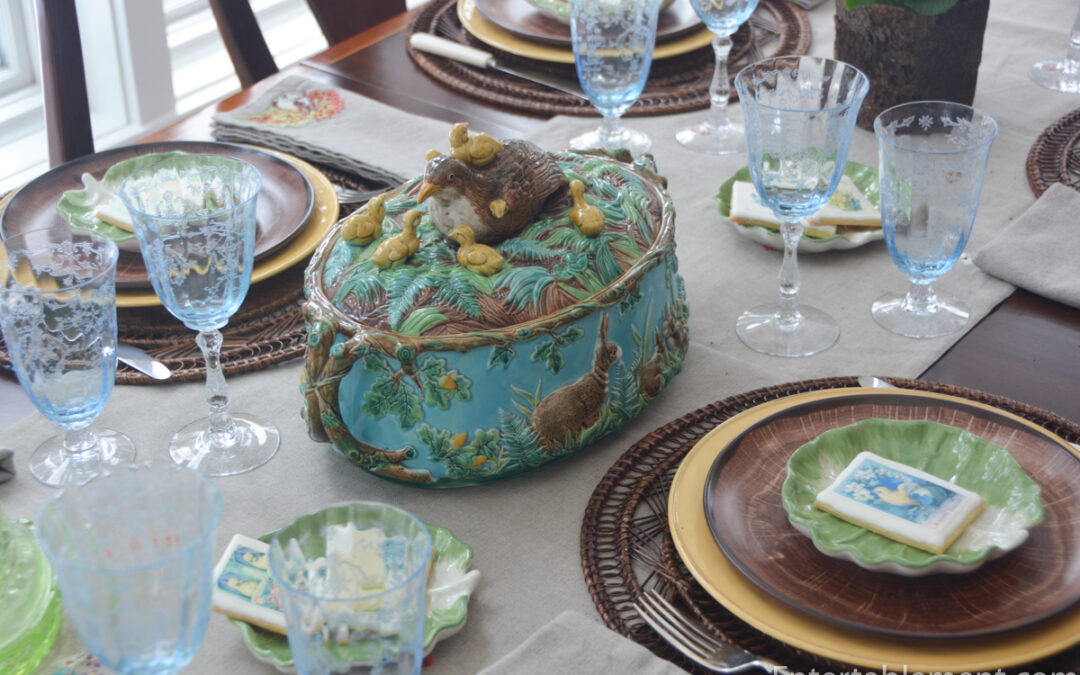 Easter is right around the corner, and the bunnies in this house can’t wait. We have hustled up a batch of sugar cookies to host our Full Nest of feathered friends. 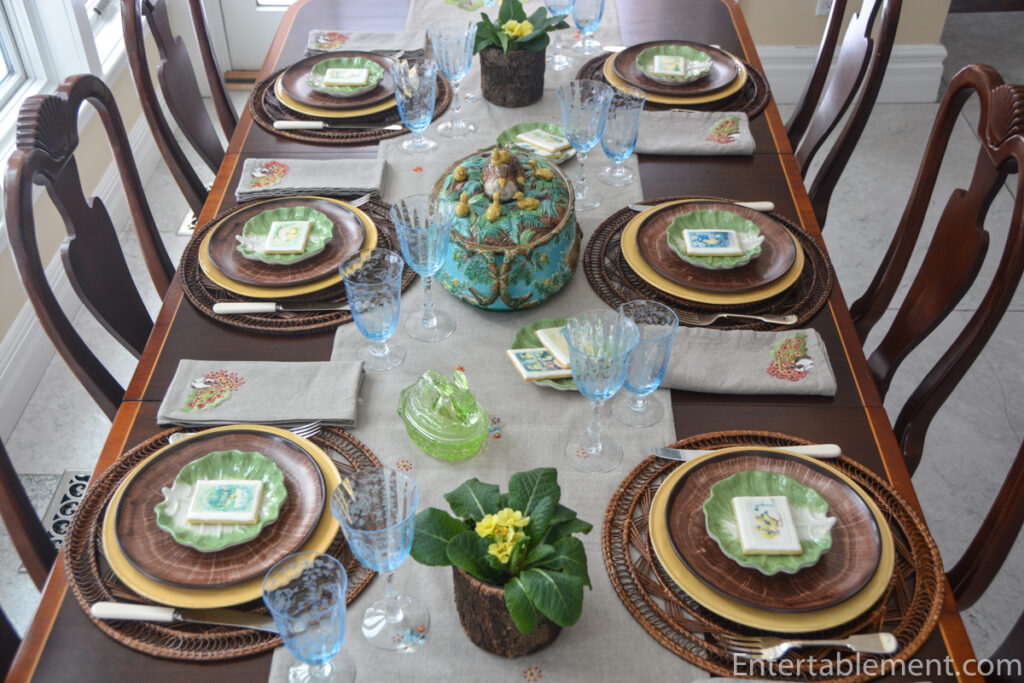 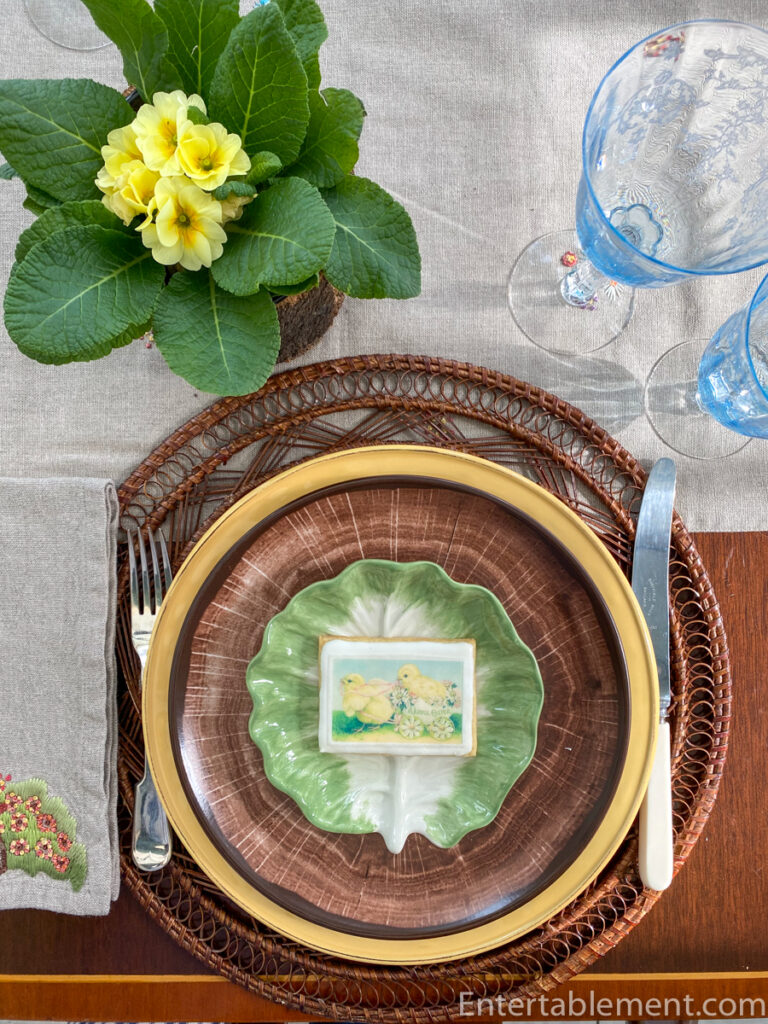 All of which frame a flock of colourful chicks cavorting on iced sugar cookies. 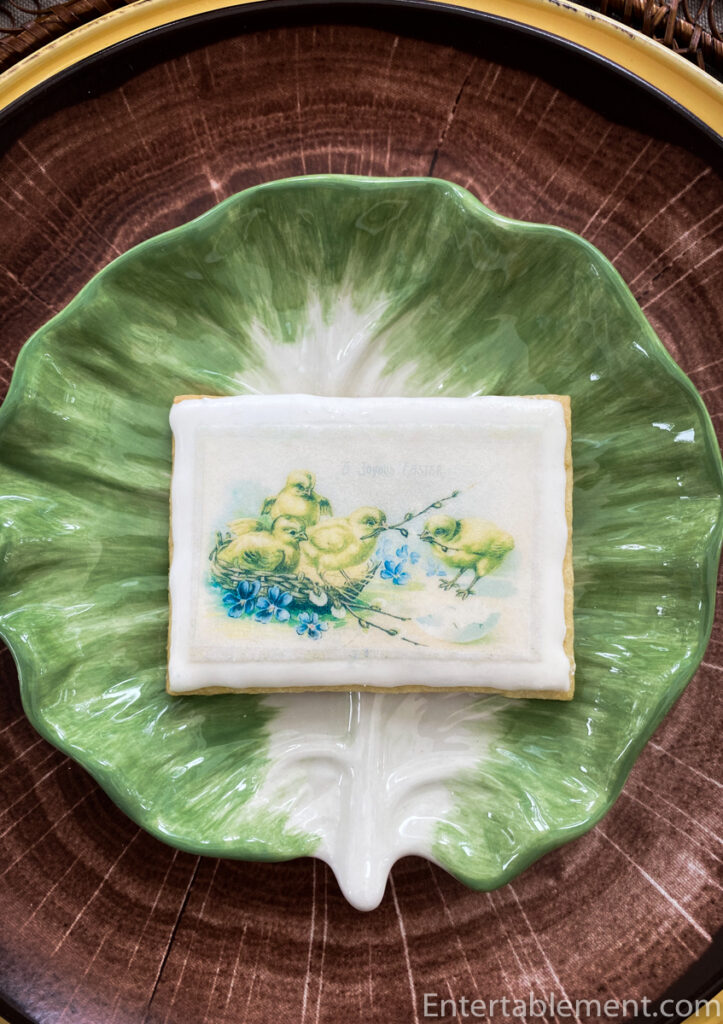 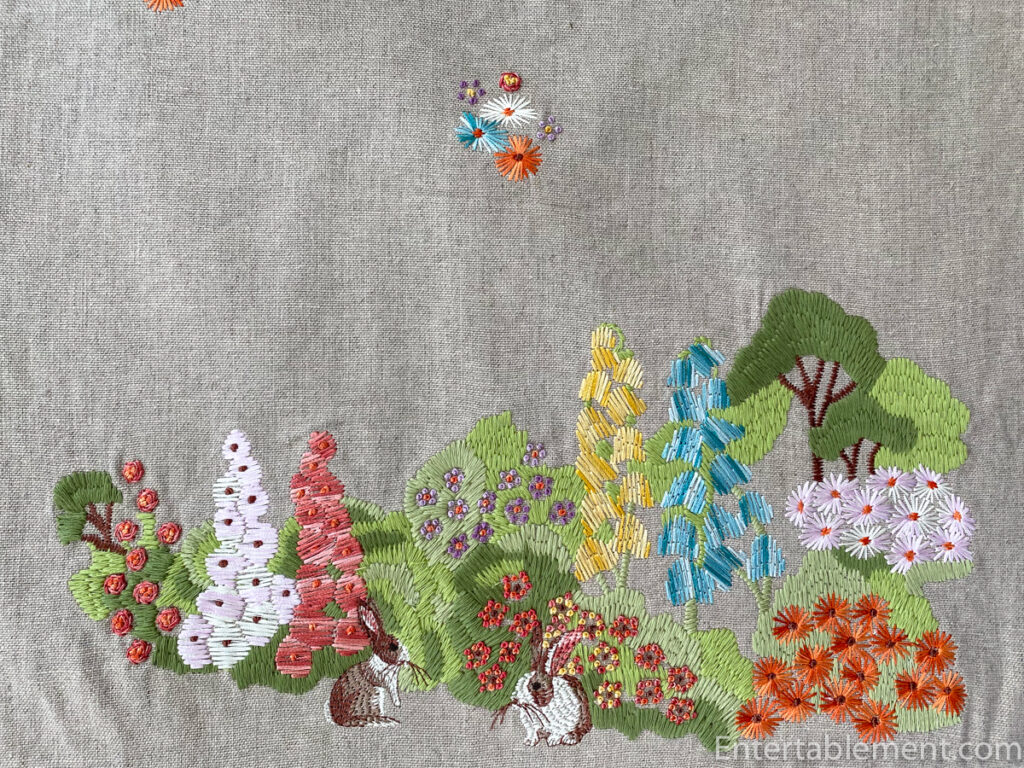 A flock of babies surrounds Mama Quail on the lid of this Victorian game bird dish by George Jones. 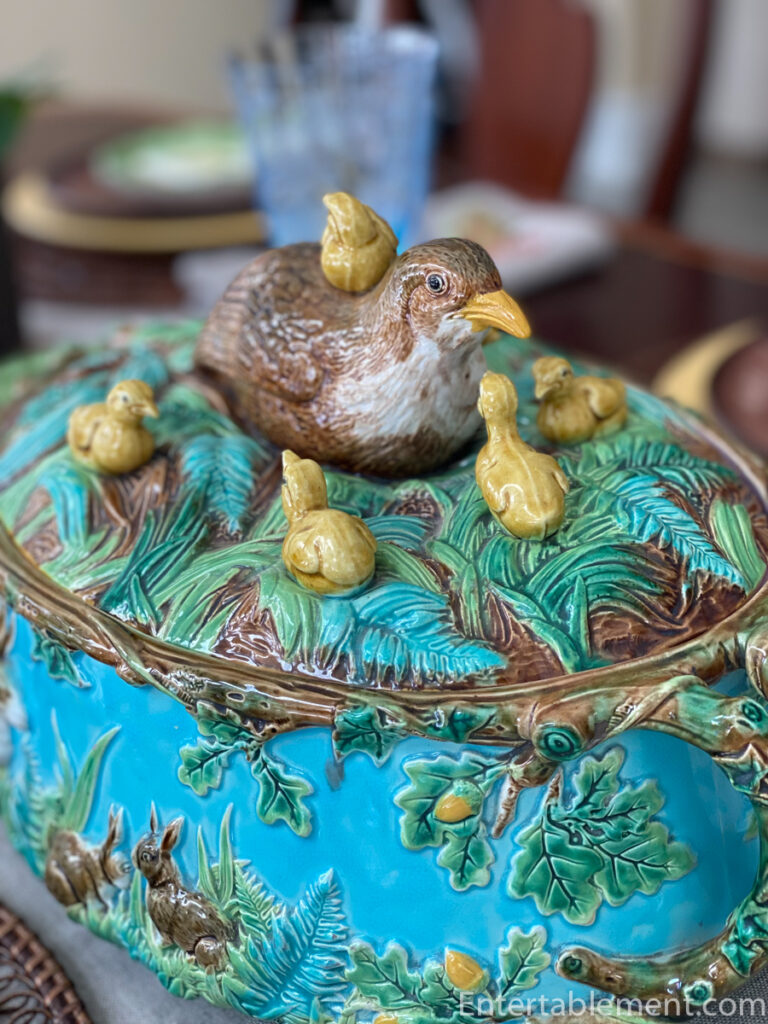 The vivid turquoise background highlights a family of rabbits hiding in the ferns and grass. 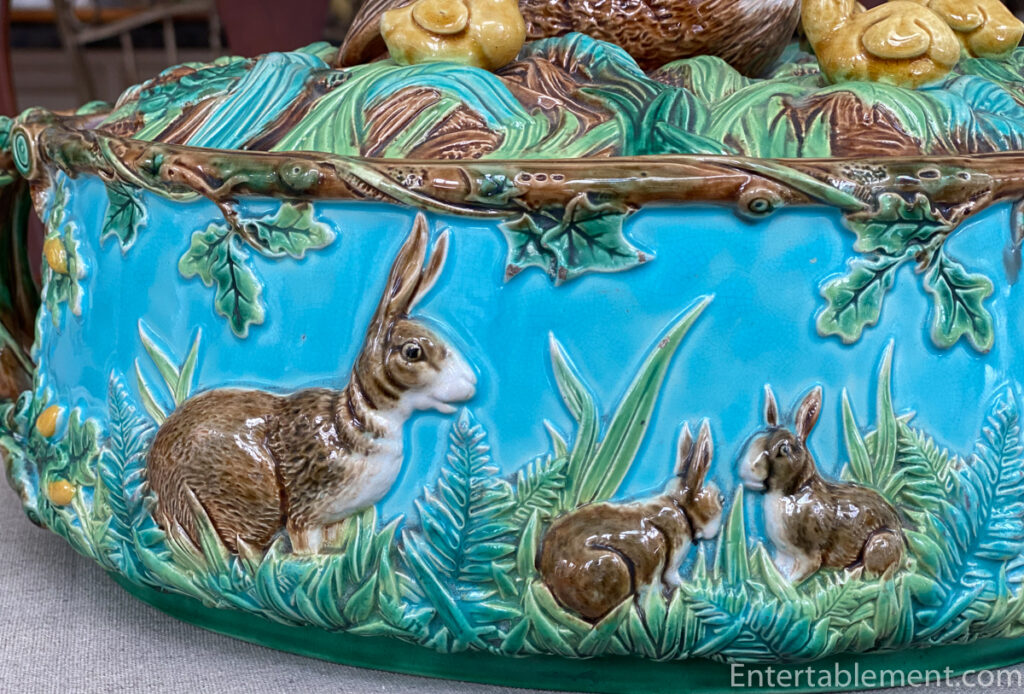 At either end of the tureen, sturdy handles in the shape of branches continue the woodsy, natural motif. 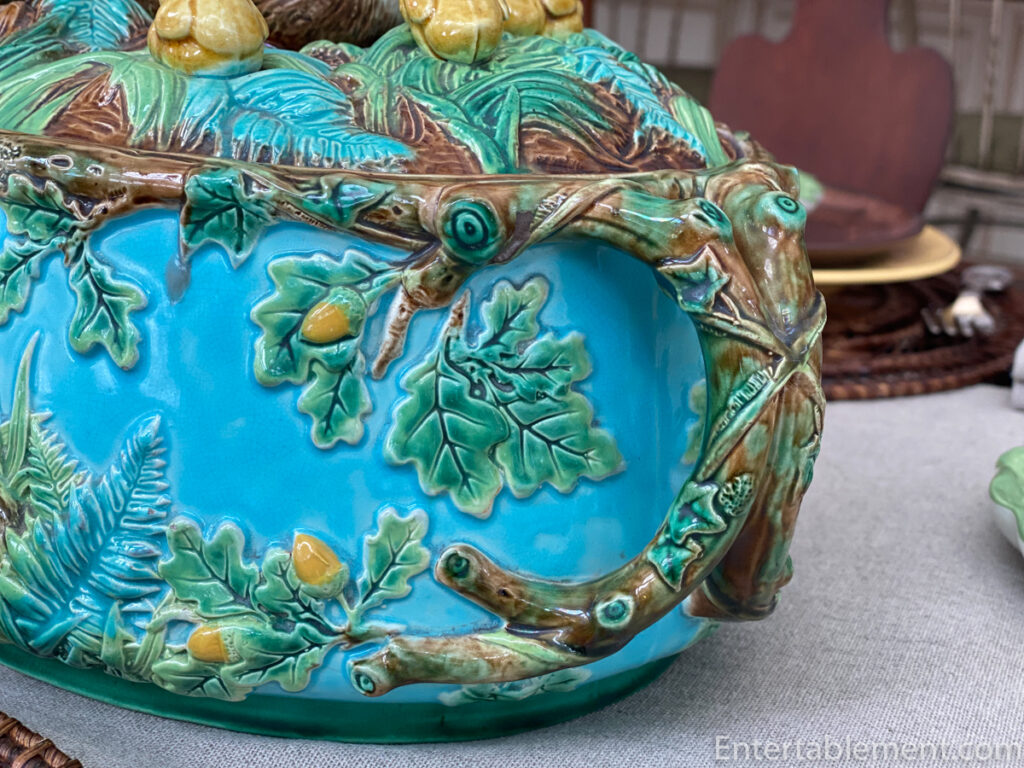 George Jones was a renowned potter whose work rivalled the likes of Minton and Wedgwood. Surprisingly, his family had no connection to the pottery industry before fourteen-year-old Jones began his seven-year apprenticeship with Minton. The youngest of nine children, I suspect his parents were starting to run out of career options for their numerous offspring and began looking farther afield. 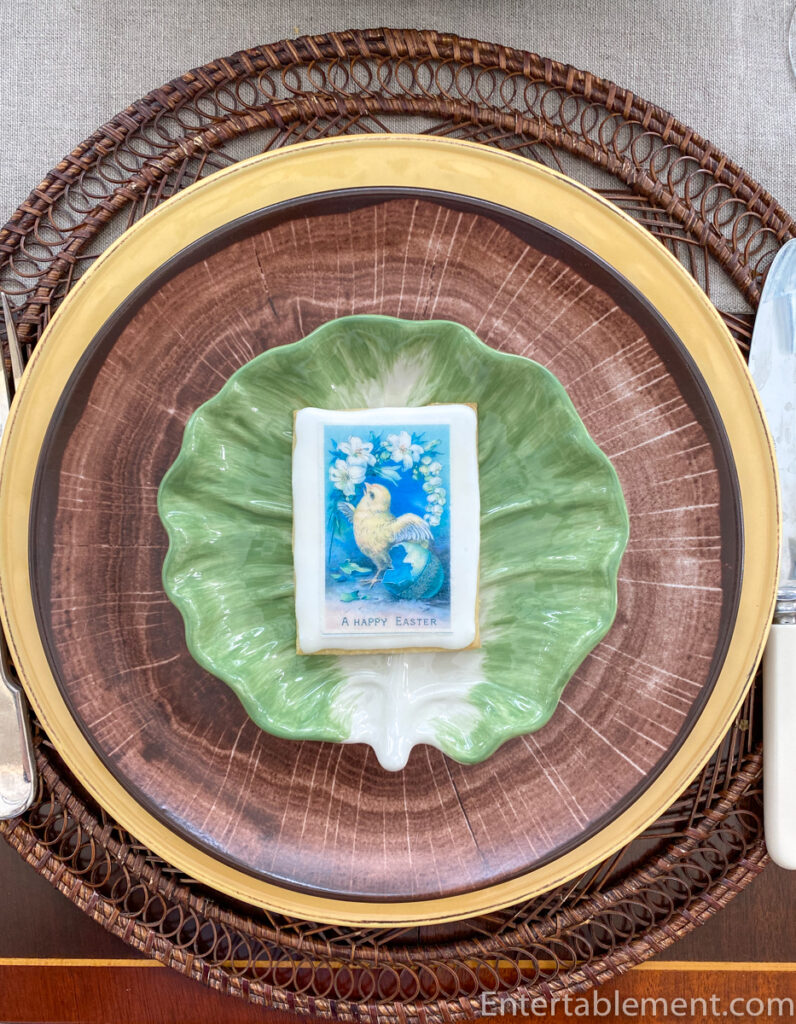 Upon completion of his apprenticeship in 1844, Jones began working as a travelling salesman for the rival firm, Wedgwood, and by 1850 had established himself as a successful china merchant in Stoke-on-Trent, the hub of the pottery manufacturing district. 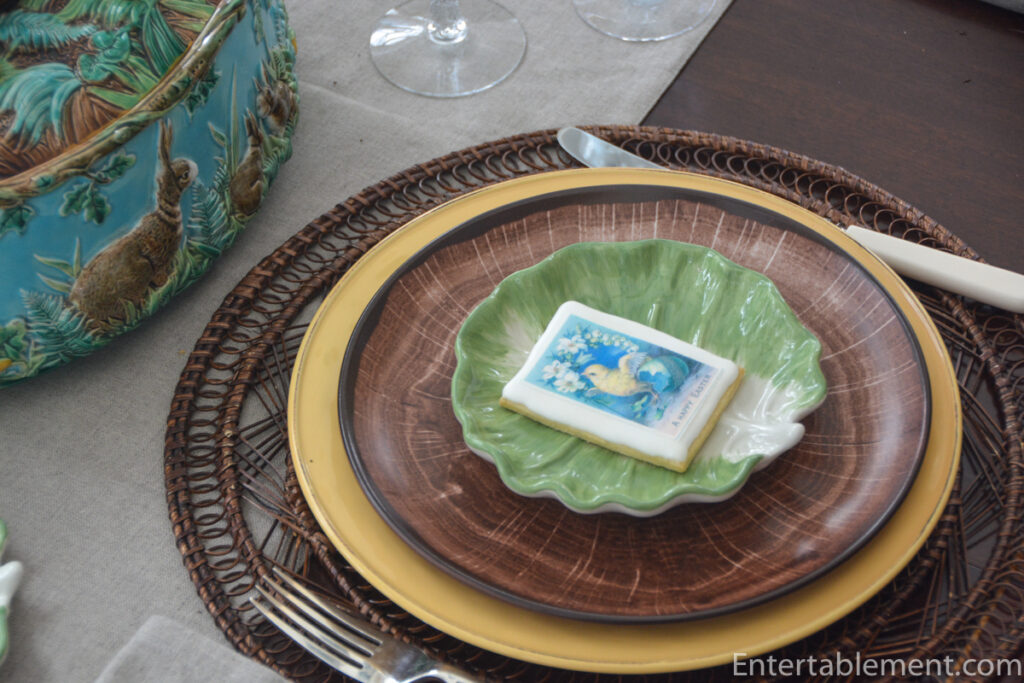 George Jones didn’t begin producing his own pieces until 1862, when he acquired the Bridge works, already manufacturing white granite wares. Then, two years later, he purchased parcels of land from Colin Minton Campbell of Minton fame and began the construction of the Trent Potteries, completed in 1865. Here, in 1866, in this new and efficient manufacturing facility, he began producing the majolica for which he is so famous. Indeed, George Jones won a medal at the Paris Exhibition in 1867 and received acclaim at exhibitions in London (1871), Vienna (1873) and Sydney (1876). 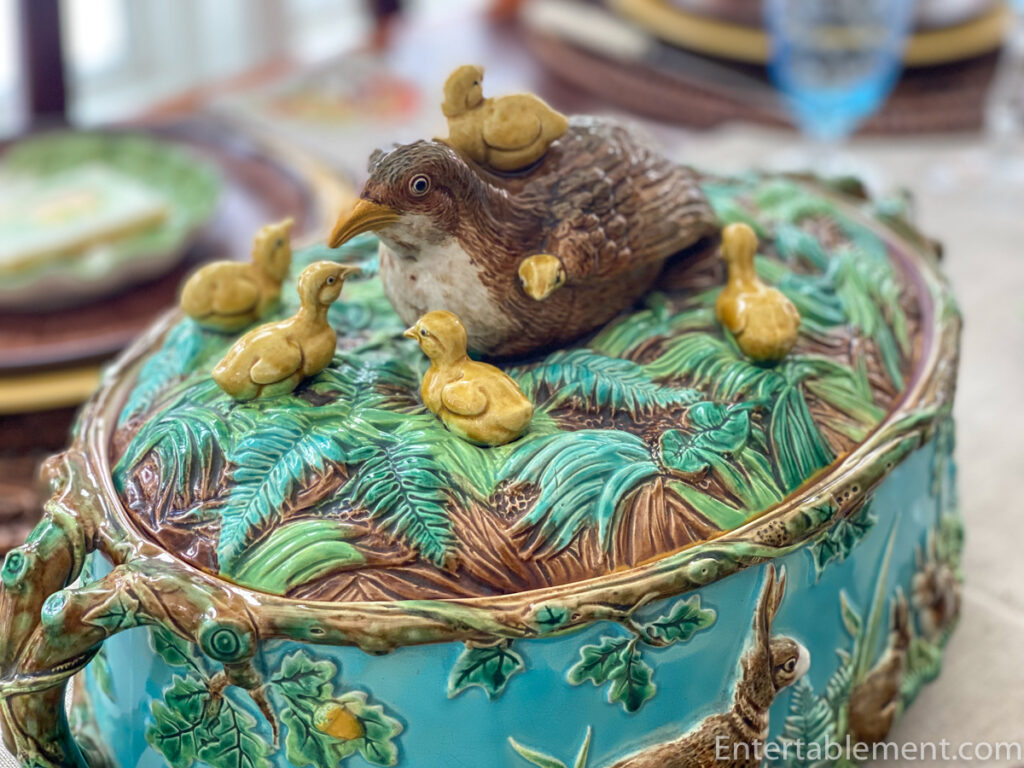 By 1873, the firm employed 590 skilled workers. When Jones’s eldest two sons, Frank Ralph and George Henry Jones, joined the business, the firm was renamed George Jones & Sons and employed “Crescent” as the registered trademark of the new company. The firm continued its success following George Jones’ death in 1893 until early in the twentieth century, when its fortunes began to wane. The company was sold to its managing director Walter Bakewell in 1929, and by 1951 the trade name George Jones & Sons was no longer used. After nearly a century of producing ceramics, the Crescent works was demolished in 1959. 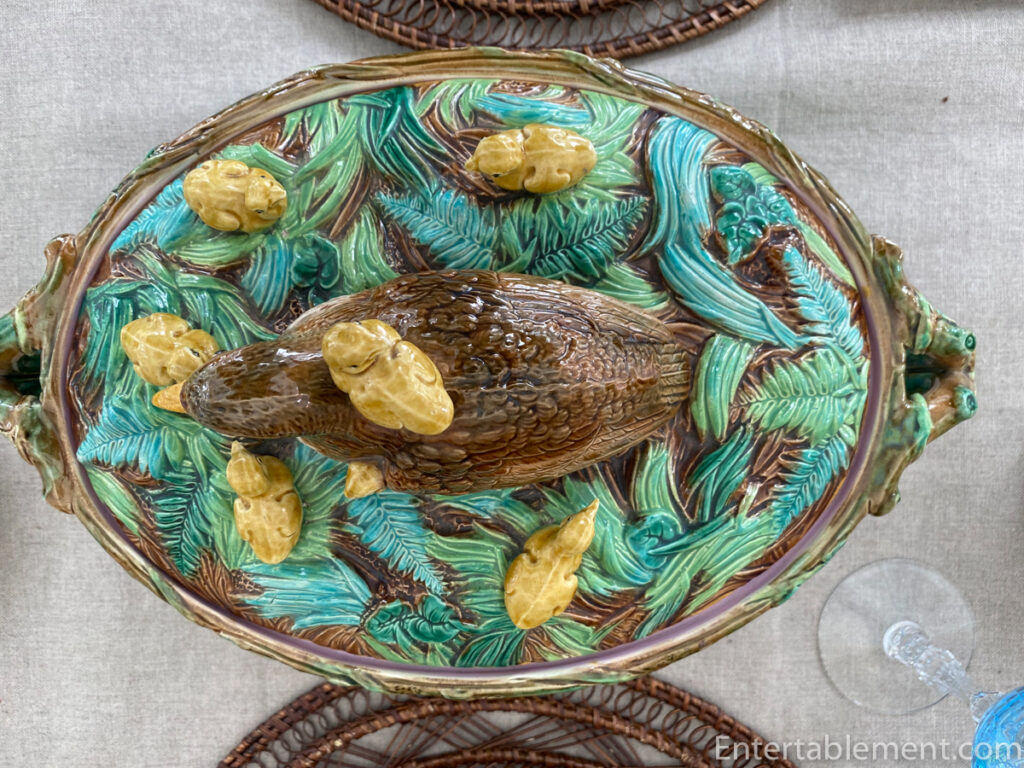 The Victorians were mad for highly decorated cheese keepers, sardine boxes and game bird dishes. Here is a page from George Jones & Sons catalogue, showing a variety of cheese keepers on the left and teaware and serving dishes on the right. 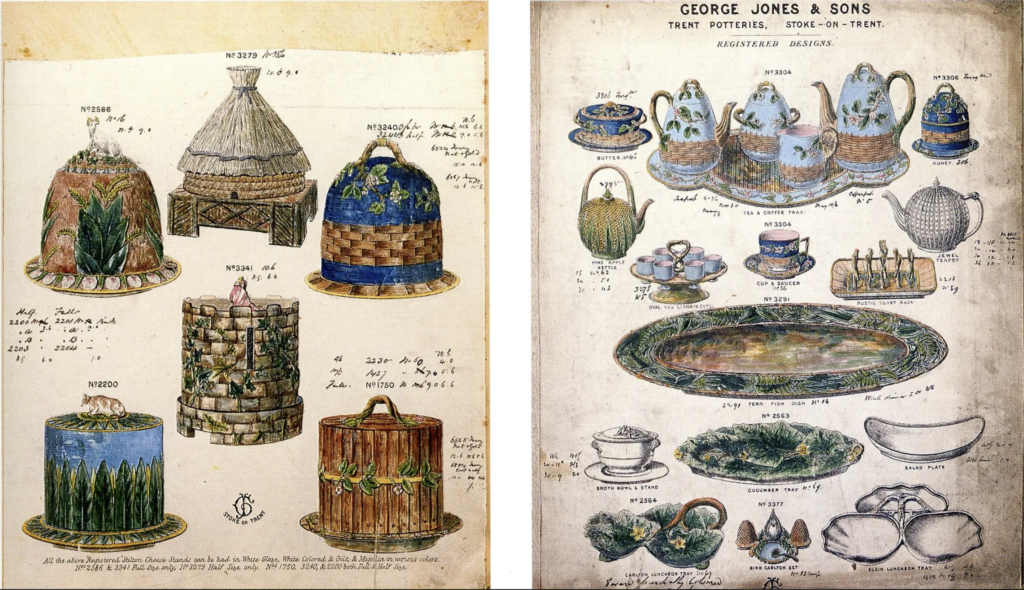 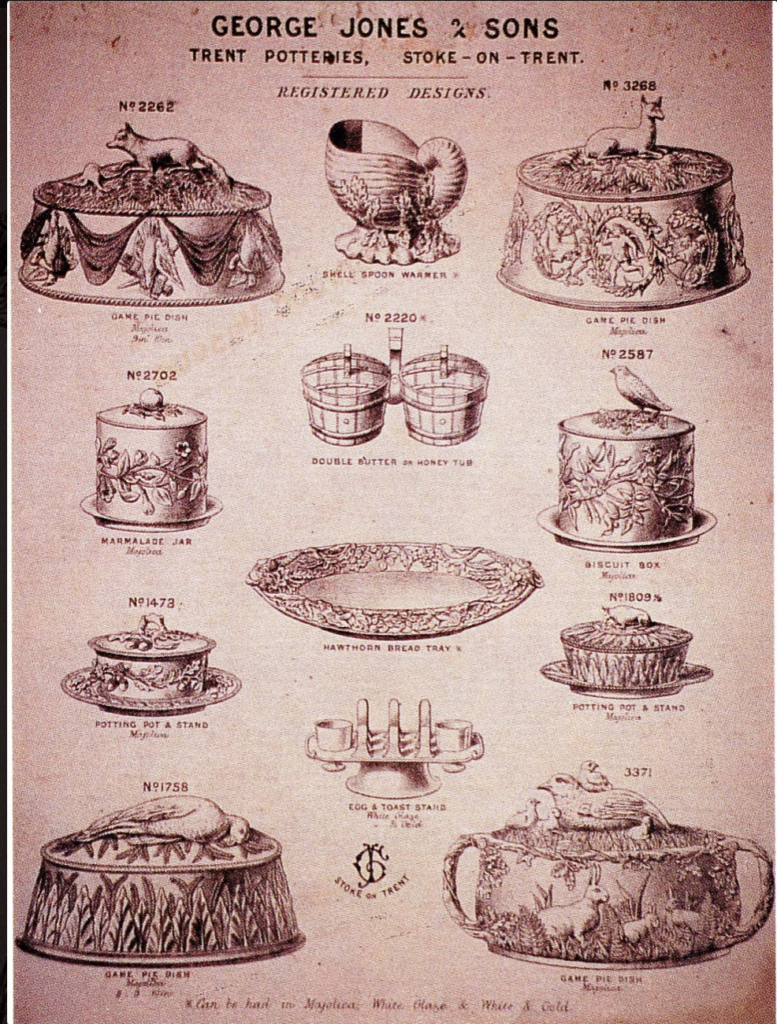 The liner in which the actual baking is done is removable. 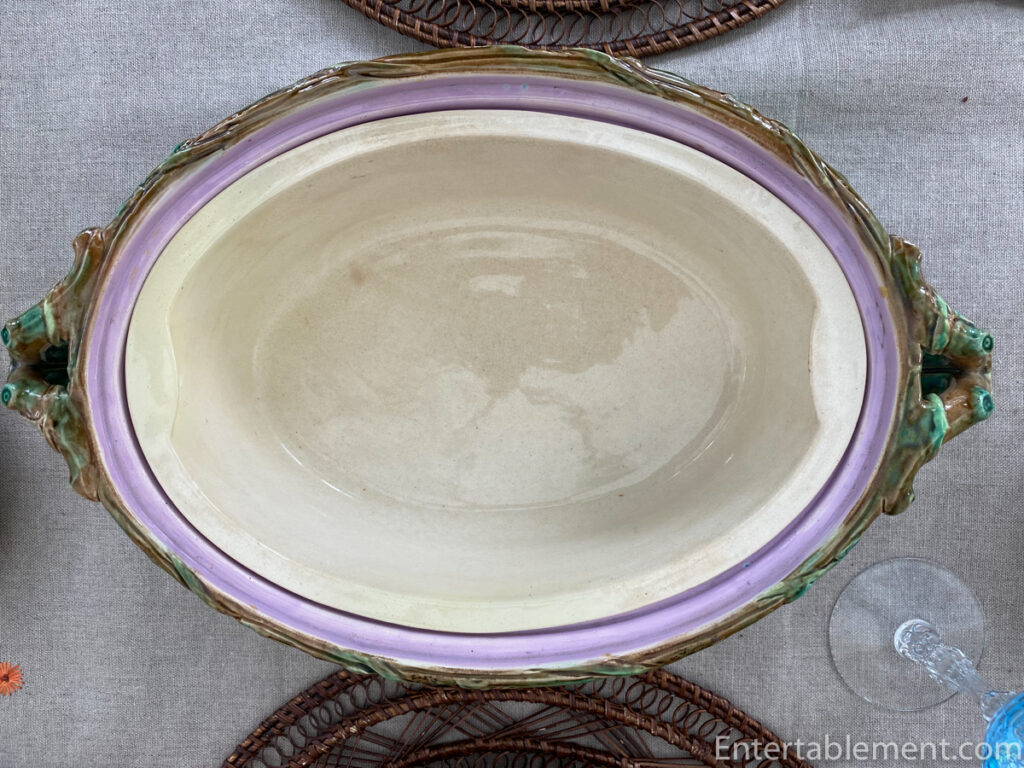 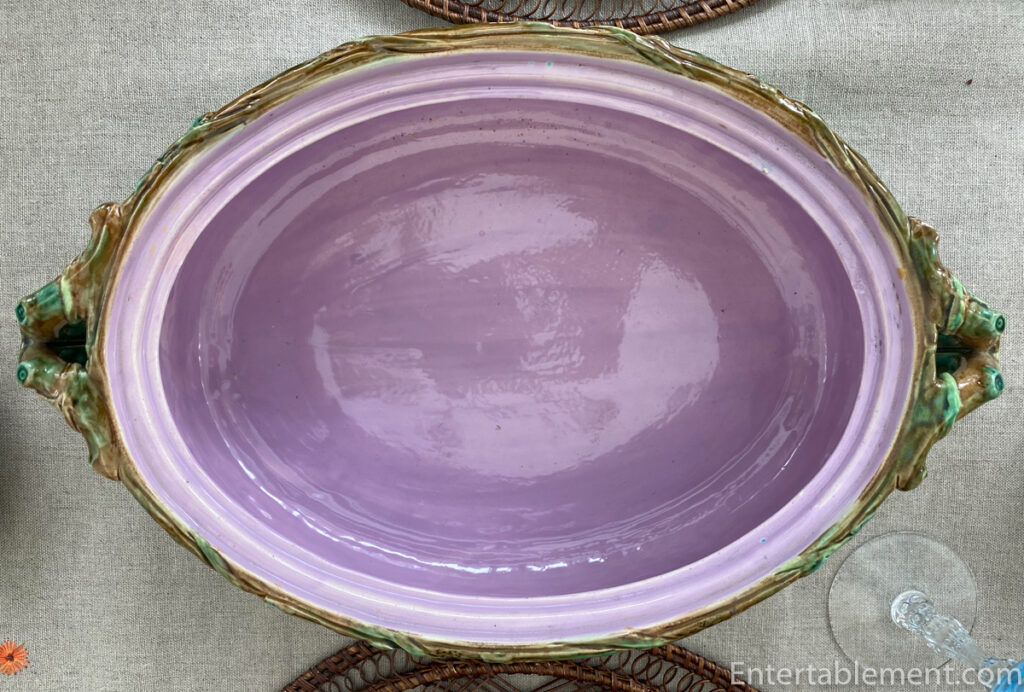 Full Nest is so-called because there is another version without a brood of chicks surrounding the hen. 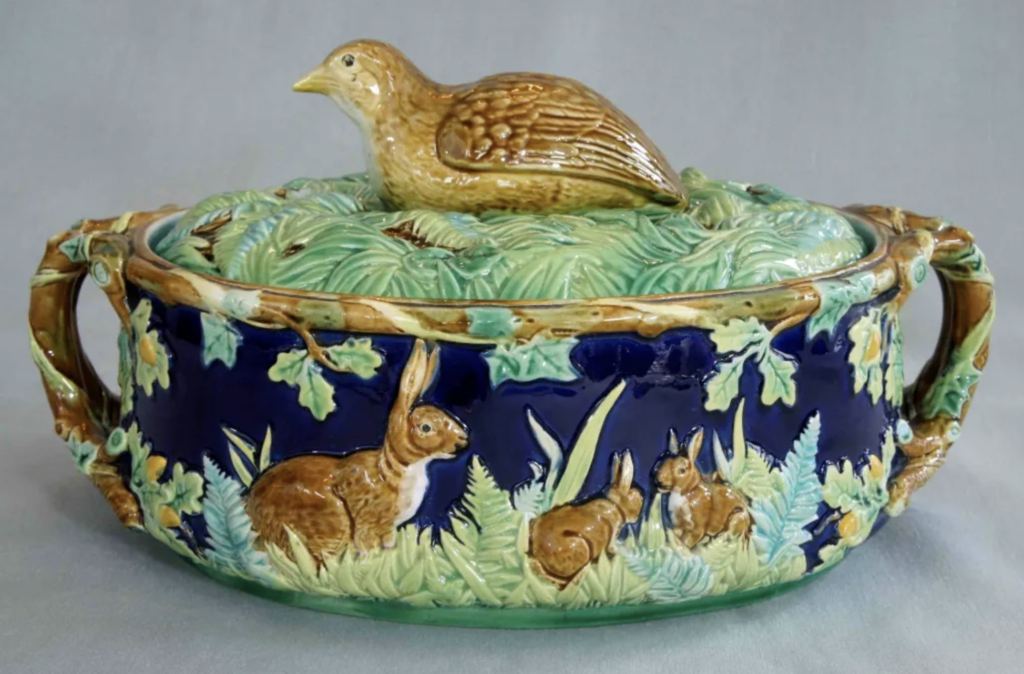 These dishes come up very rarely at auction, and I almost settled for Empty Nest a few years ago but held off. I knew my duck-crazy granddaughter Juliana would never forgive me if I forwent the brood of adorable chicks. Eventually, a Full Nest came along, and here we are! All chicked up and ready to party. 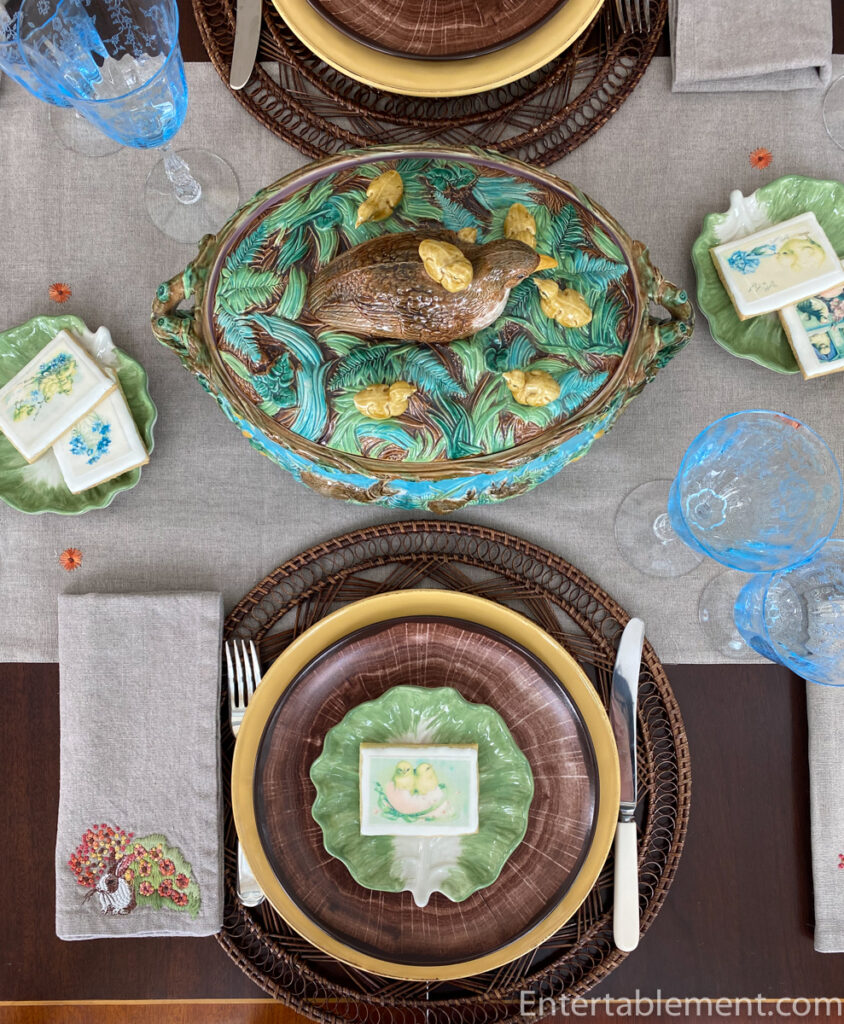 And back to our table! 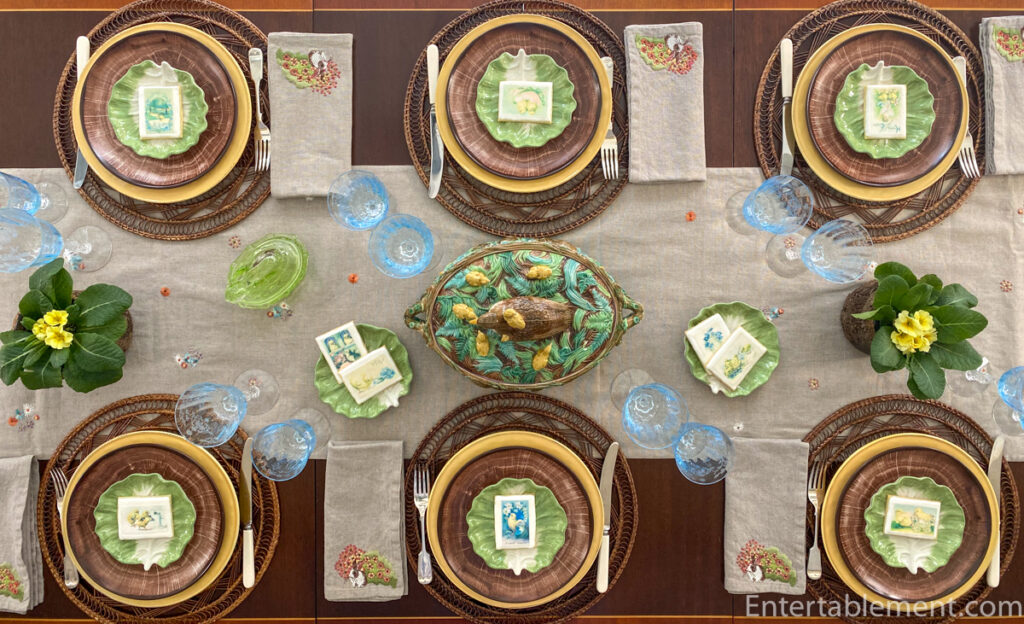 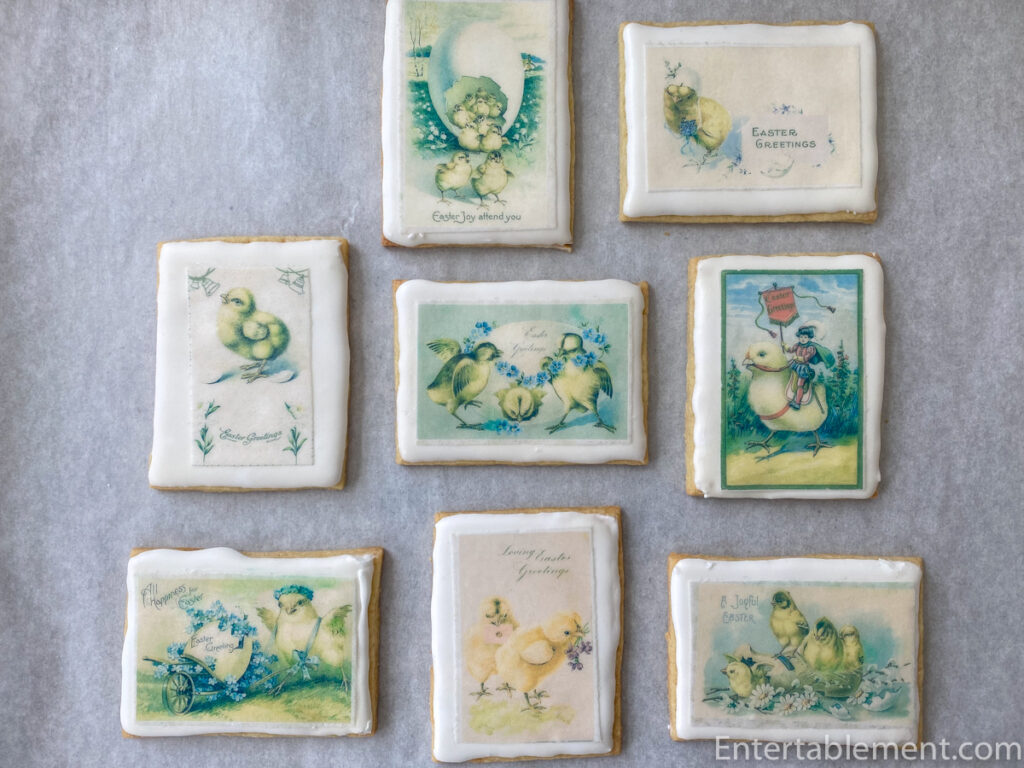 An absolute bevy of chicks. Juliana was ecstatic. I doubt these cookies will ever be eaten. 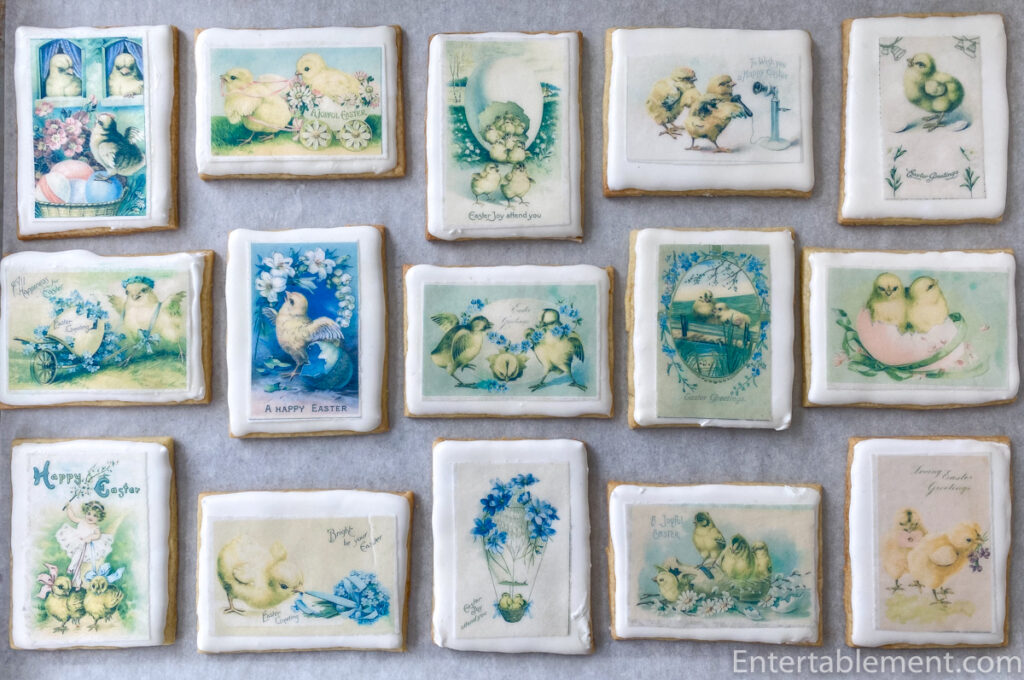 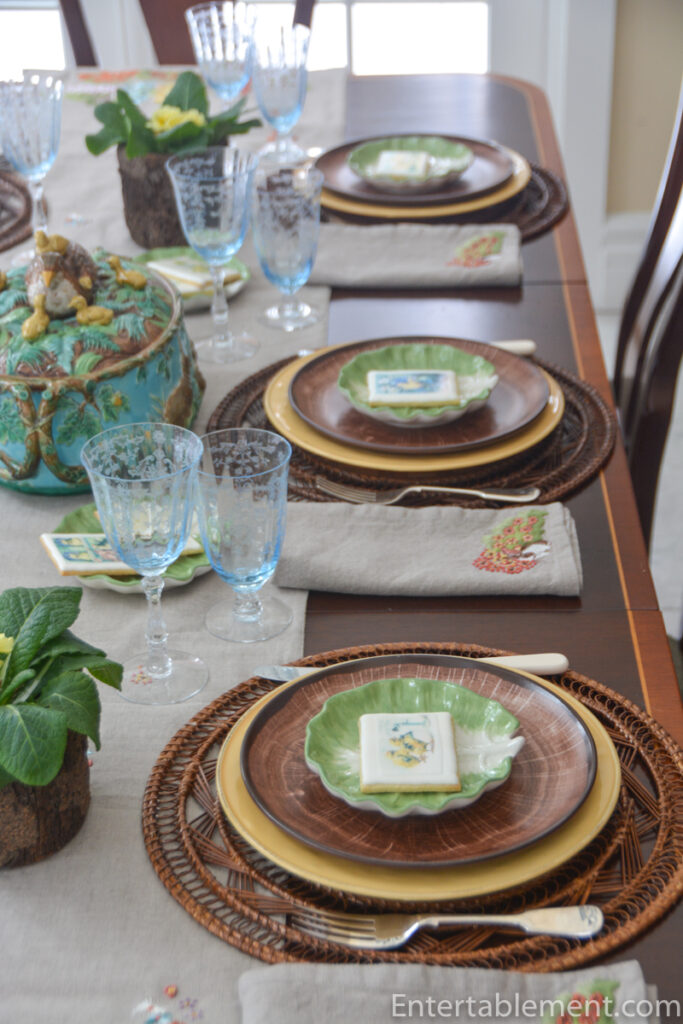 I hope everyone had a relaxing weekend and is off to a good start on this very chilly Monday morning. Last week, I bought a flat of vibrantly blooming baby moon daffodils and another of stunning ranunculus to decorate the porch. They’ve been moving in and out of the house at night to avoid an early demise. But, things are looking up for later in the week when I hope we will see the last of old man winter.
Next
Previous