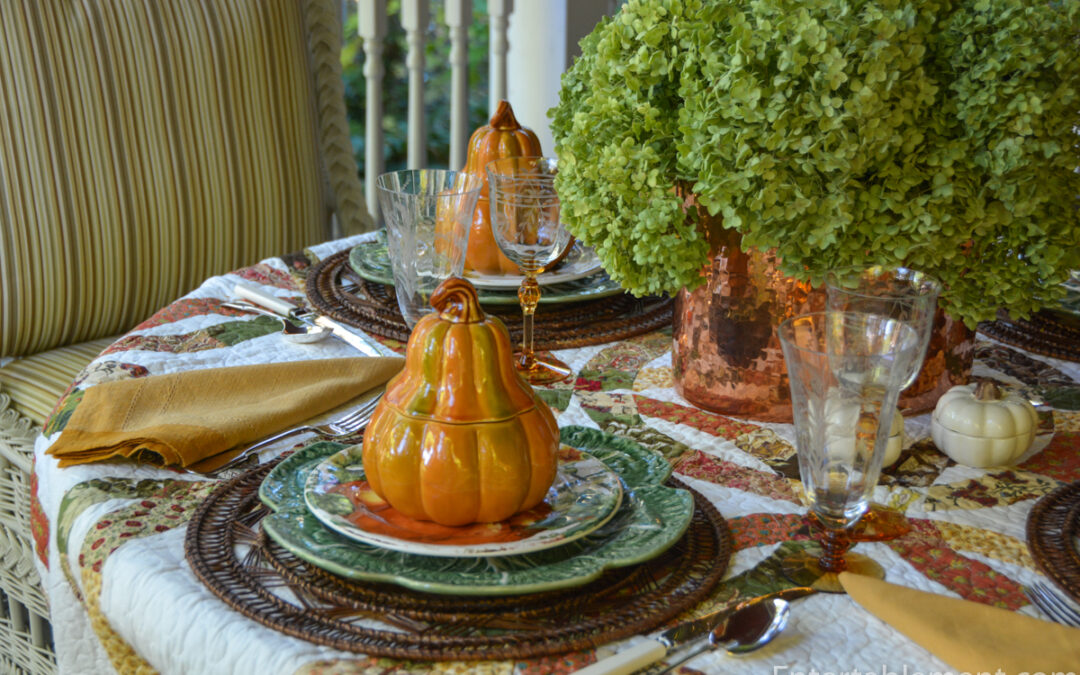 The weather has been incredibly warm, and we have delighted in taking long walks with the dogs, happily crunching through the leaves. Dignified Churchill, now a decade old, walks with a measured gait, never straining at the leash. He’s been very tolerant of the little ones, letting them crawl all over him in the early days and happily playing with them. 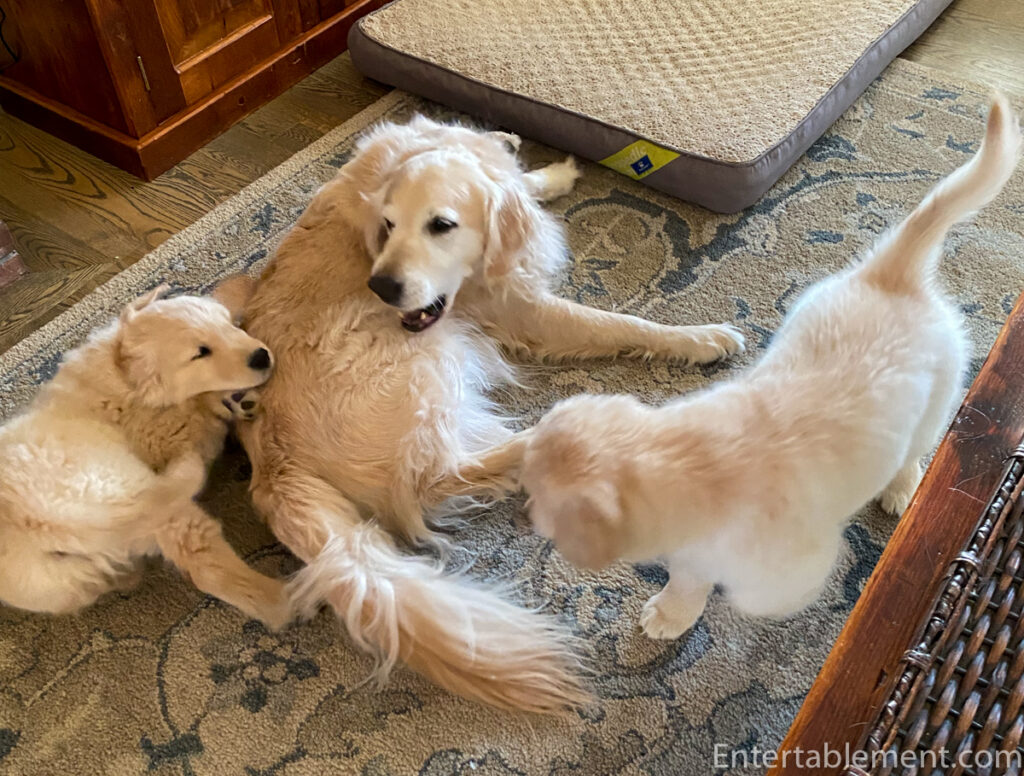 Remember those little babies? Marigold at the front and Spencer, slightly darker even as a puppy, at the back. 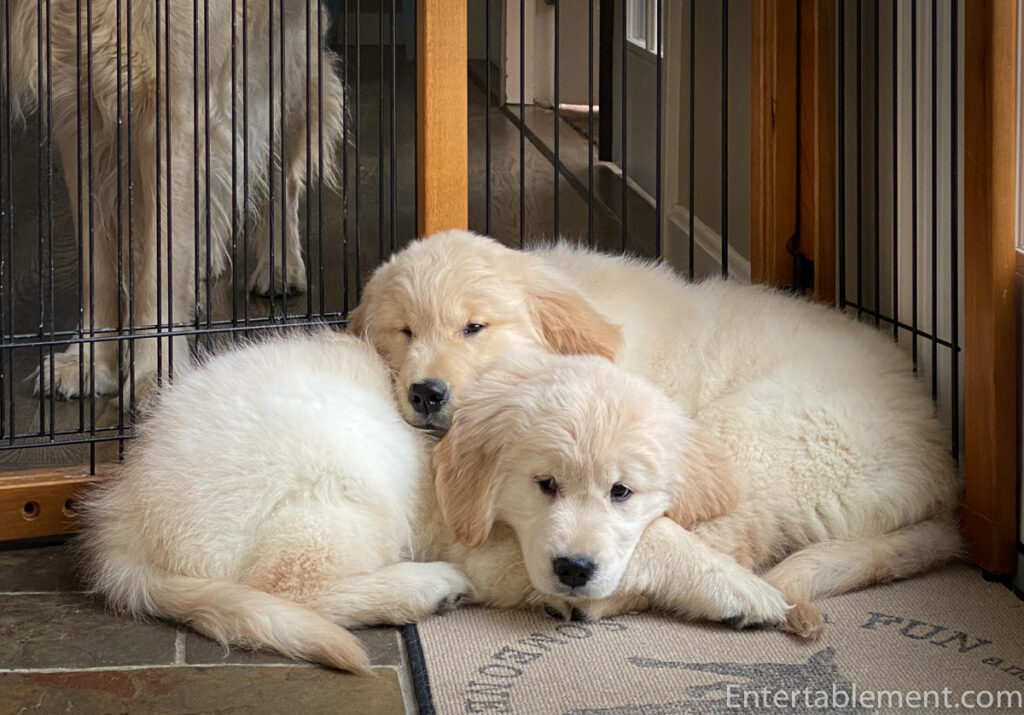 They celebrate their nine-month birthday tomorrow! 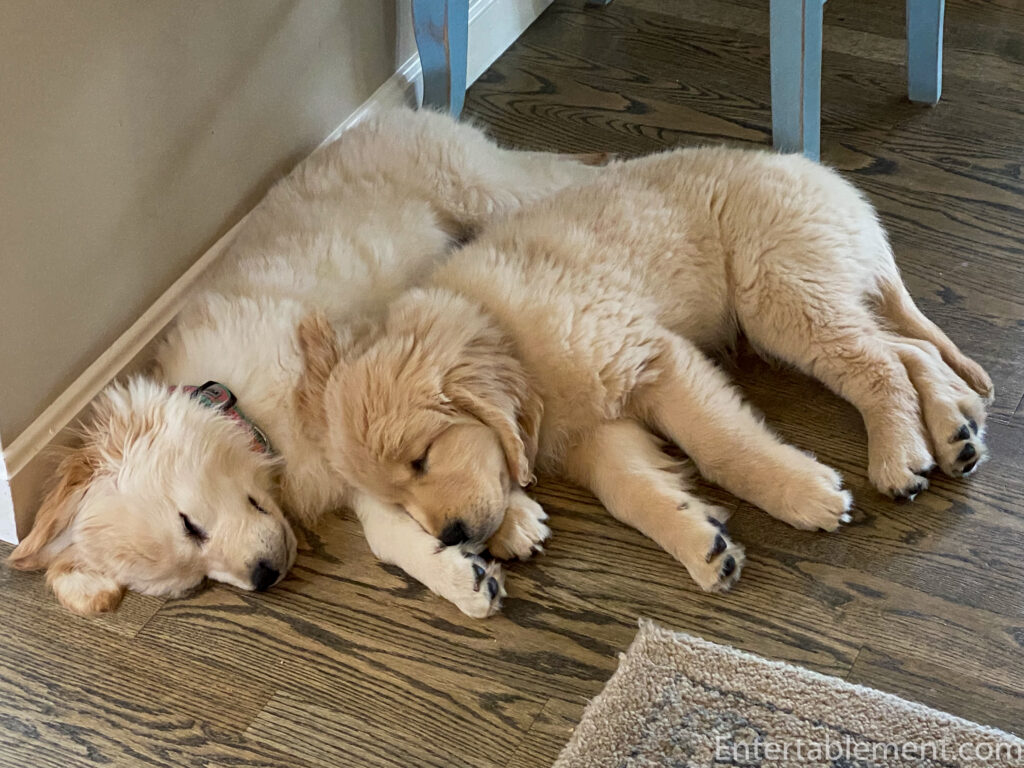 Marigold has settled into what is likely close to her adult size. She’s petite and dainty with a calm, affectionate disposition, sitting quietly and waiting to be cuddled. Spencer, on the other hand, is all gangly legs and crashing clumsiness. He’s exuberantly affectionate, with whacking great paws that he deploys with tremendous vigour. “Pet Me!” his paws demand. “Put your paws down, Spencer,” we say a dozen times a day. His proportions are that of a teenage boy who has just undergone an enormous growth spurt—his back end seems a touch too high, and he’s more than a touch too skinny, despite consuming gargantuan portions of food. But he is the most loving lad, always eager to please.

Aren’t they huge? Quite a change in a few short months. 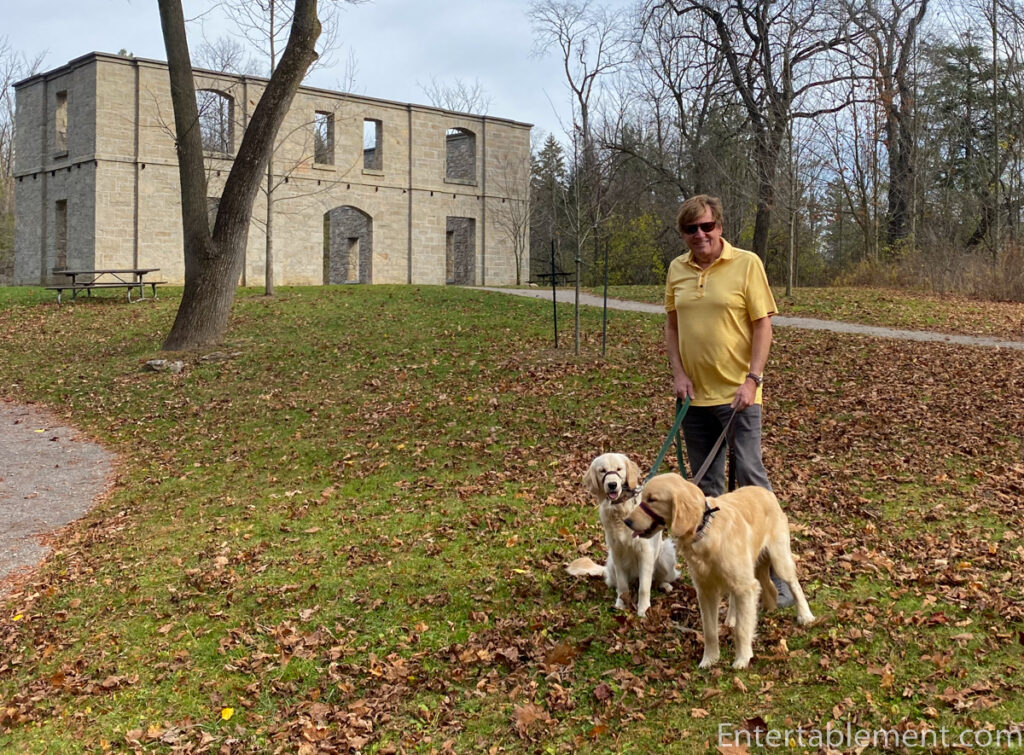 We took them for a long walk in the conservation area yesterday. We like to give them short rides in the car with fun in the middle, so they don’t get the idea that every time they get in a vehicle, they’re headed either to the vet or on a nine-hour journey to or from the Cape. As the pups are still learning leash manners, I usually walk Churchill, and Glenn keeps Spencer, the exuberant, under control. Marigold walks very well, on the whole, and goes back and forth between us, depending on how well she’s managing. It’s a work in progress, but they are becoming excellent walkers with patience and repetition. 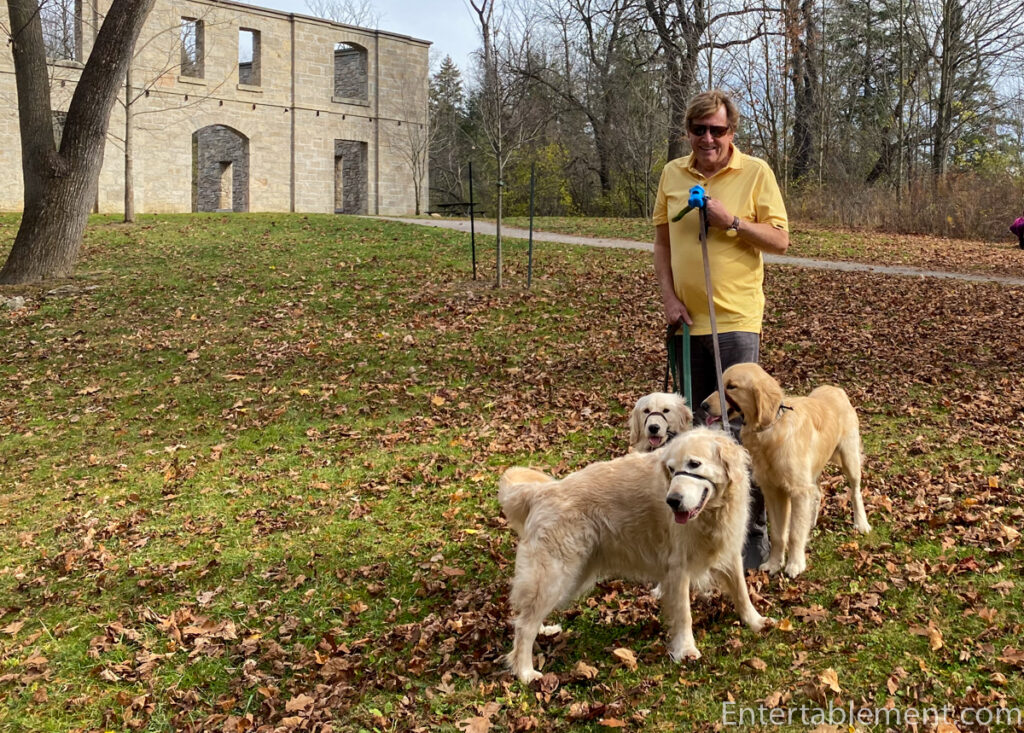 Back from the walk, it was still so warm that we were tempted to eat on the porch. So on went the wedding ring quilt. I pulled out the copper wine cooler filled with chartreuse Annabelle hydrangeas and set it in the middle. 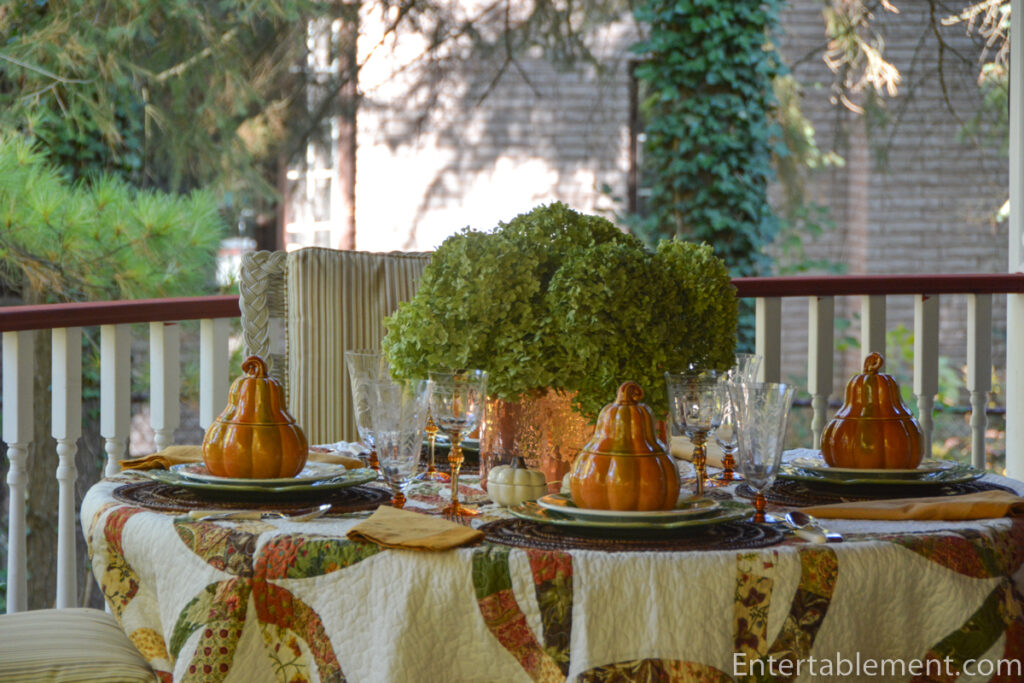 I’ve been eager to use these gourd tureens, bought in Pier 1’s last gasping days, and had made Pumpkin Soup with Rosemary and Walnuts to go in them. 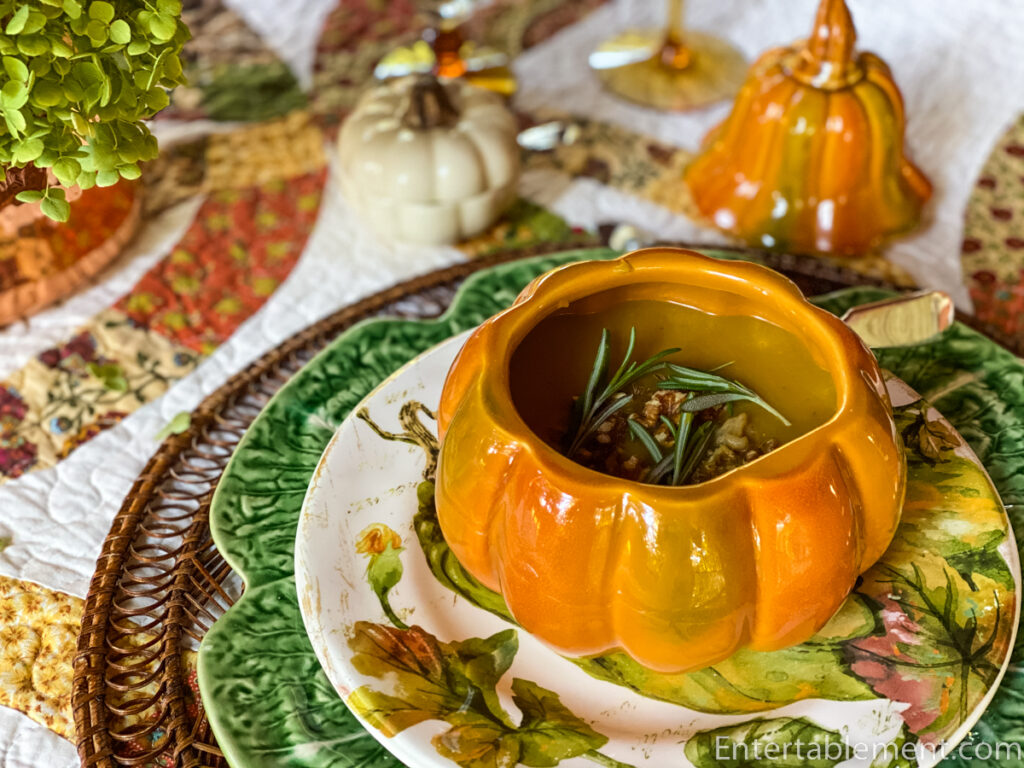 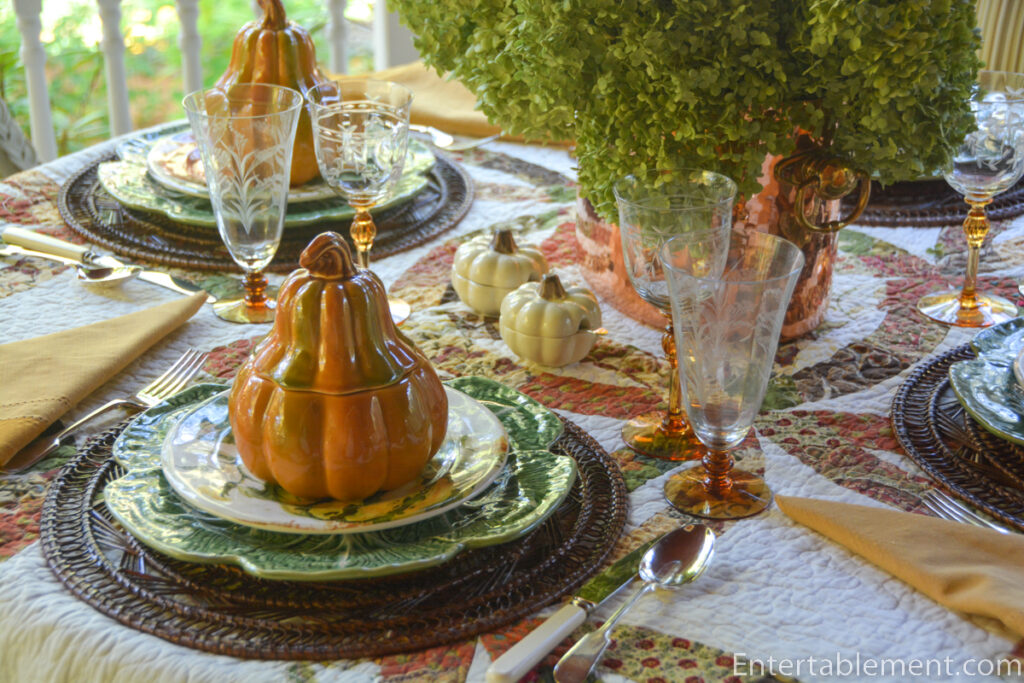 Underneath each tureen, I placed a large Bordallo Pinheiro cabbage dinner plate and one of Pier 1’s pumpkin plates, of which there are four different patterns previously used here. 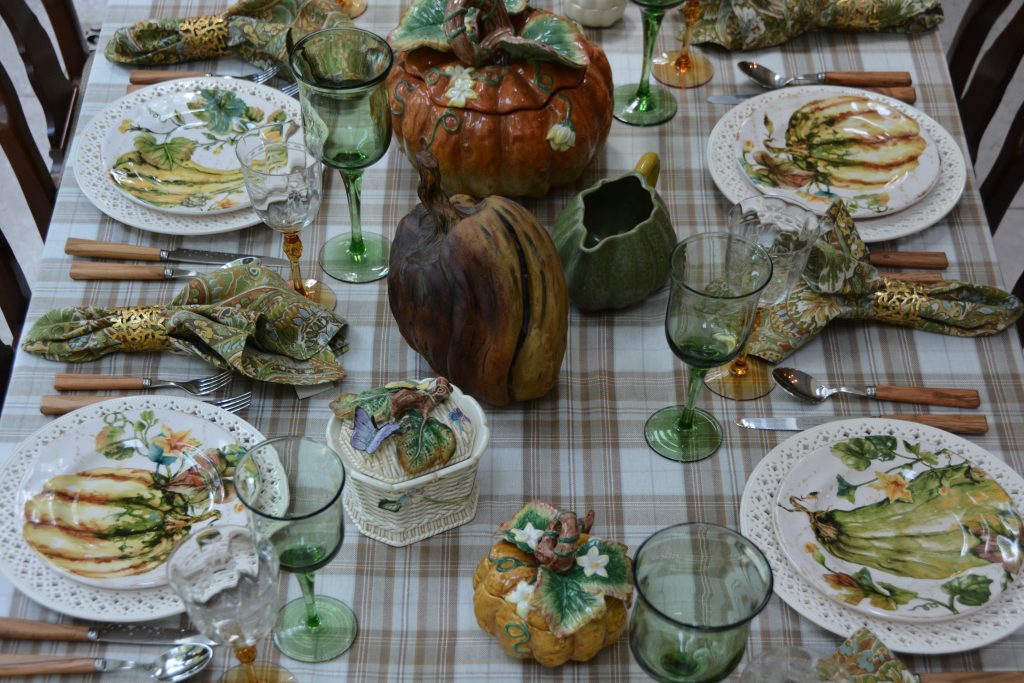 The variety of shapes and colours of the gourds is delightful; from this stripey yellow elongated one (a yellow striped cushaw, I believe) 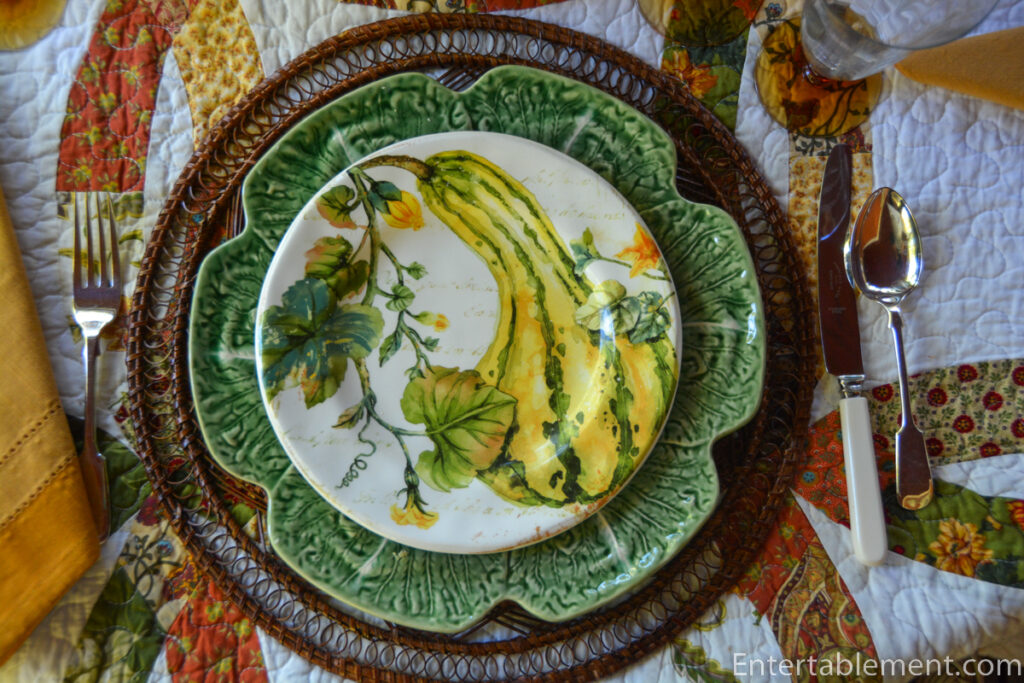 to the tubby orange pumpkin, likely a pie pumpkin. 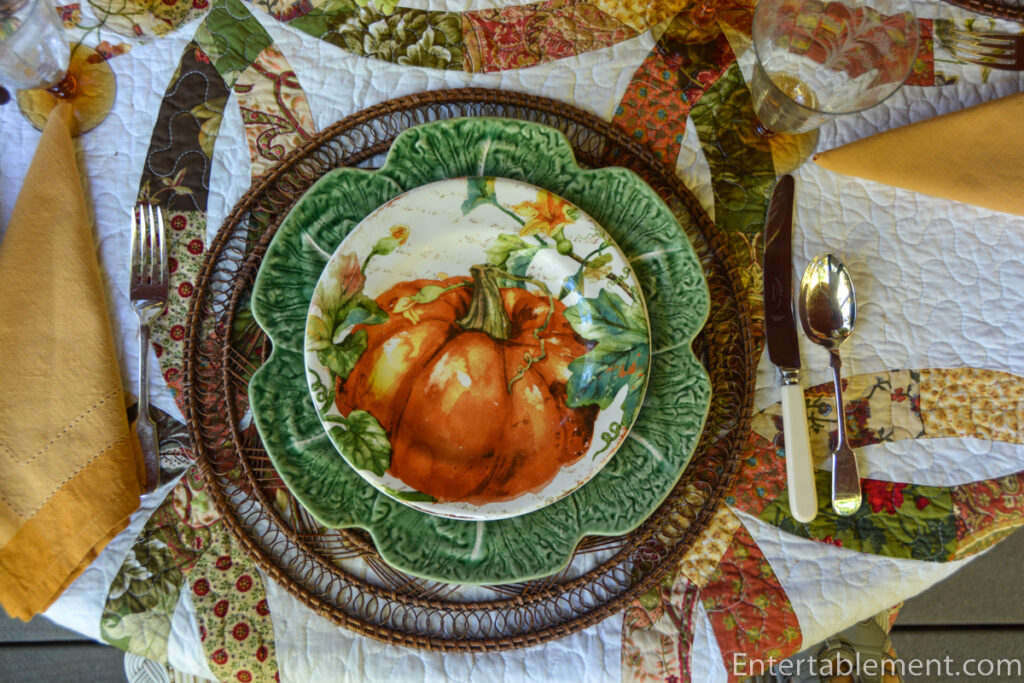 The detail on the leaves and stems is beautifully rendered, 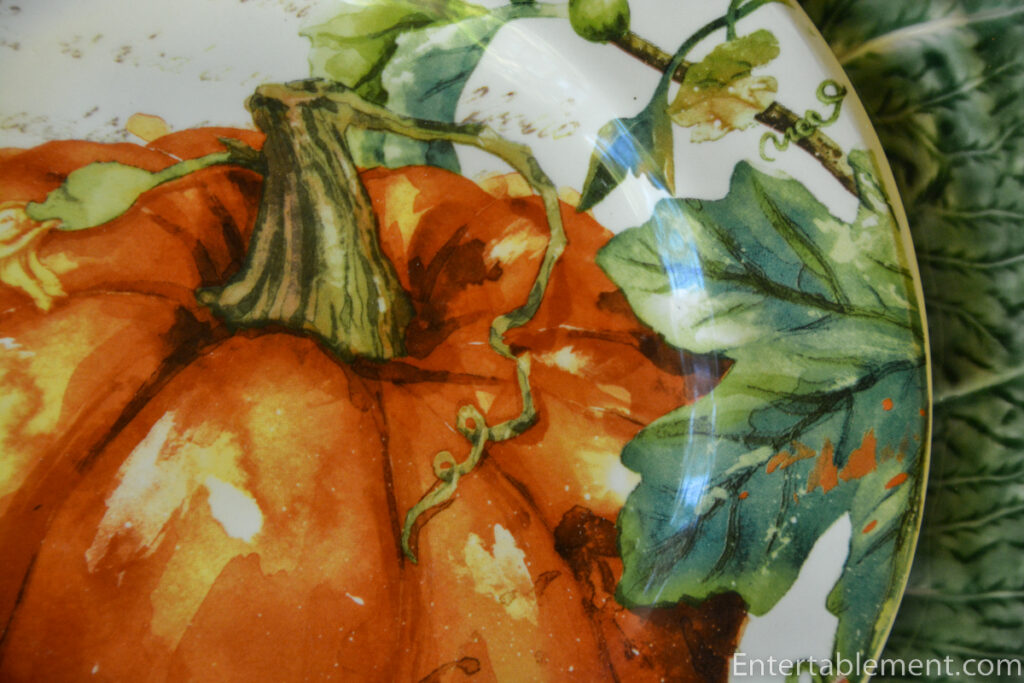 including the delectable squash blossoms. 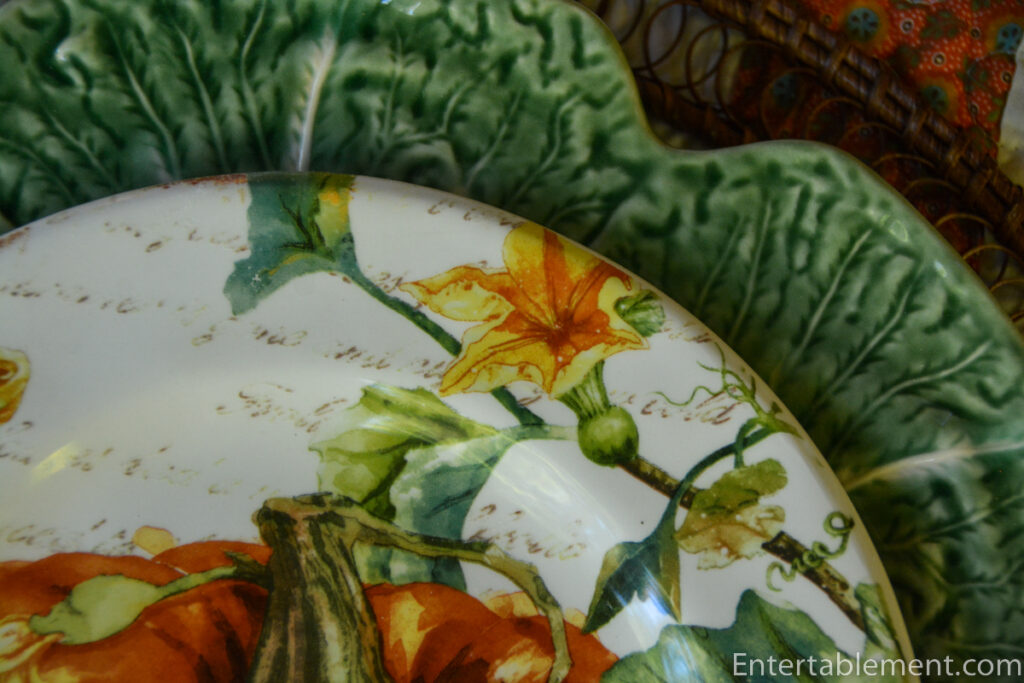 I’m not sure what kind of squash this is, an elongated green one. Any ideas? 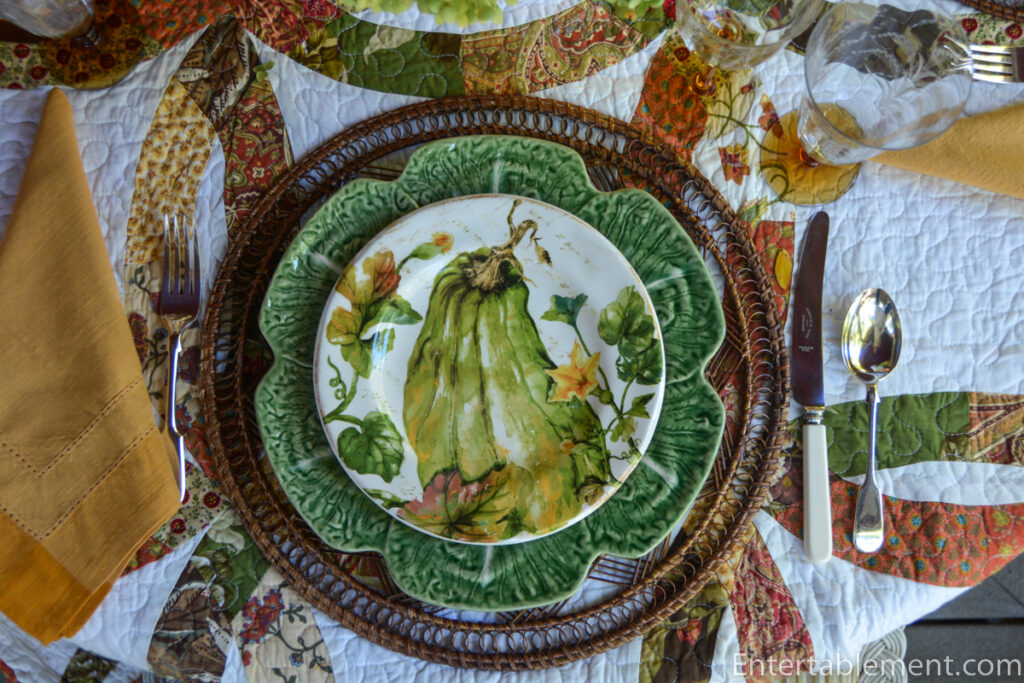 But I found some very much like this at Bennett’s Apple Farm this past weekend. 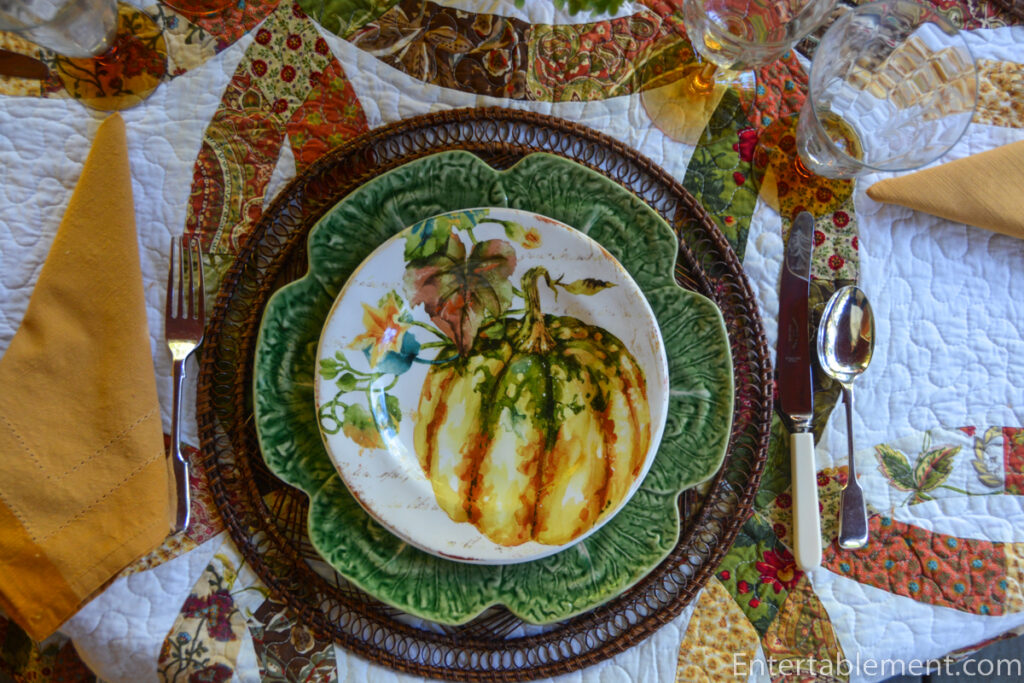 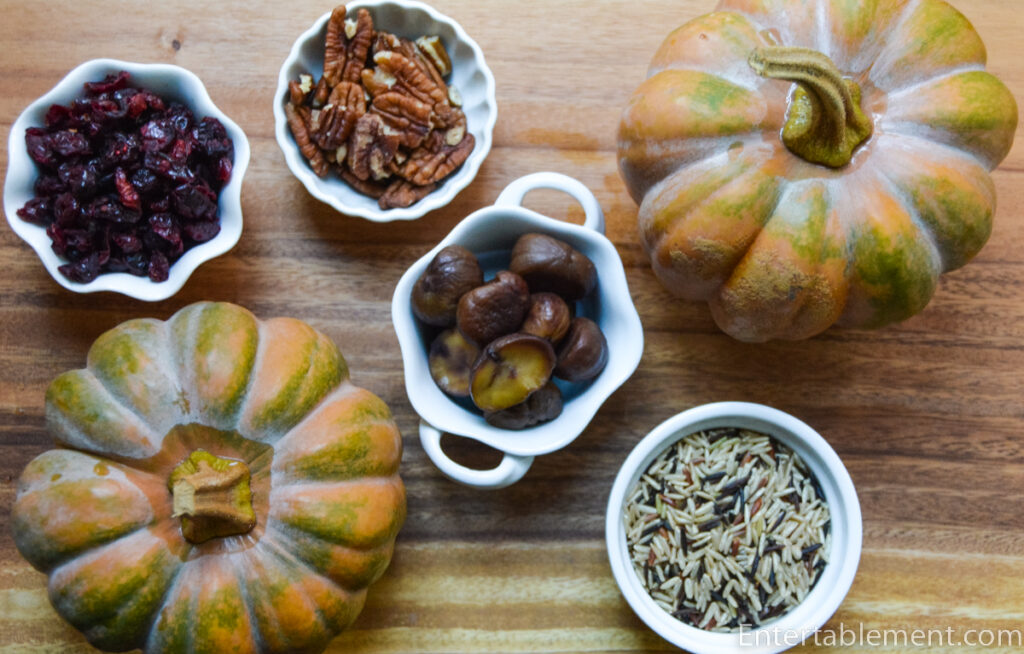 I sliced them horizontally and roasted them, serving them stuffed with a wild rice mixture studded with dried cranberries, chestnuts and pecans. The recipe is here. 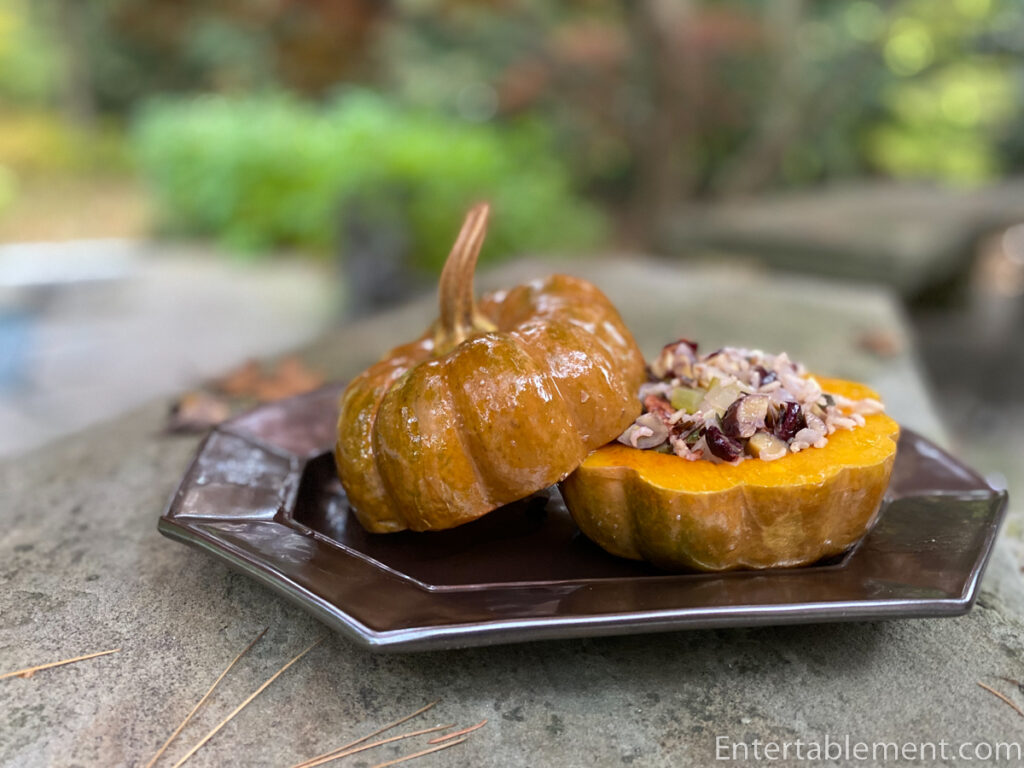 Between the lovely weather and cooking up a squash storm, I’ve been distracted from thinking about Christmas preparations. Usually, I have switched over the kitchen china and begun hauling out decorations by now, but I’m hesitant to rush the season. The leaves are still coming down in droves, and the Japanese Maple has turned its brilliant red, a sure sign of the last gasp of fall. Last year I set this table in early November, and the leaves were gone within two days. 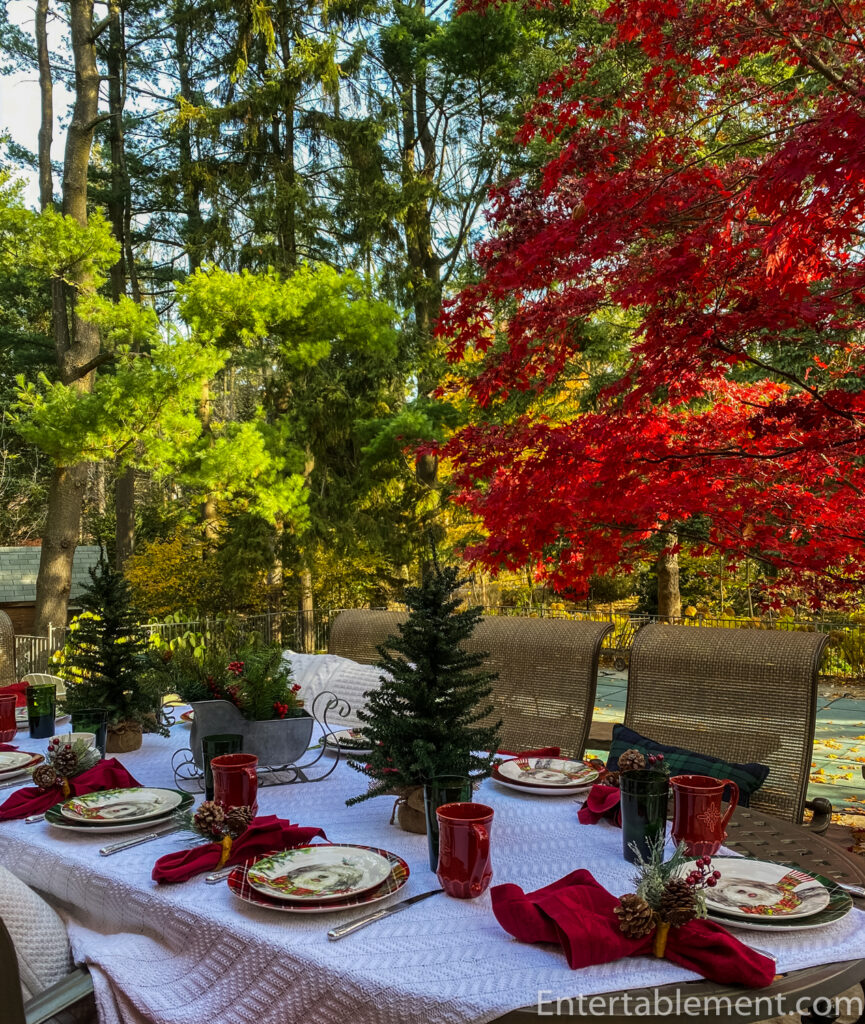 Next weekend, I’ll get started on Christmas. In the meantime, I hope everyone enjoyed their extra hour of sleep as we turned the clocks back.