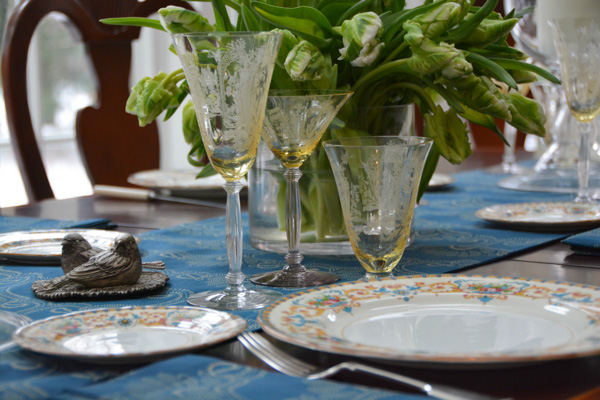 Tableware themes spring up from all kinds of places. Glenn and I were shopping for vegetables and cheeses for our Christmas Eve dinner when we passed The Elegant Garage Sale on Bayview, in Toronto. They had a couple of sets of china in the window that caught my eye, and I made a mental note to return when my arms weren’t loaded with parcels. The following week found us back at the shop and I had a good browse. They had a full set of Baronesse White by Tirschenreuth (the set that had originally grabbed my attention – more on that in a later post) and a set of dinner, salad and bread & butter plates of St. Clair by Aynsley. 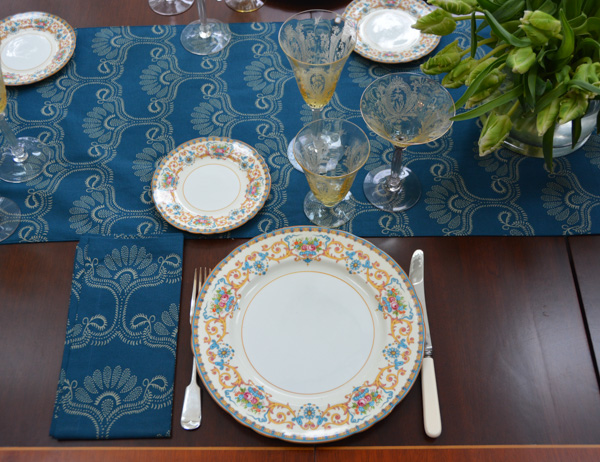 I loved the intricate pattern on the cream background of the St. Clair, particularly the unusual shade of blue – somewhere between teal and French blue – I didn’t have a name for it. I began to scan my mental inventory of glassware and linens for possible combinations as the proprietor and I concluded our very satisfactory transaction. Being The Elegant Garage Sale, the total was startlingly reasonable, and in short order they had packed everything up into two cardboard boxes. (Glenn wisely took himself off to Rahier next door for a croissant and latte while the wrapping up was going on). 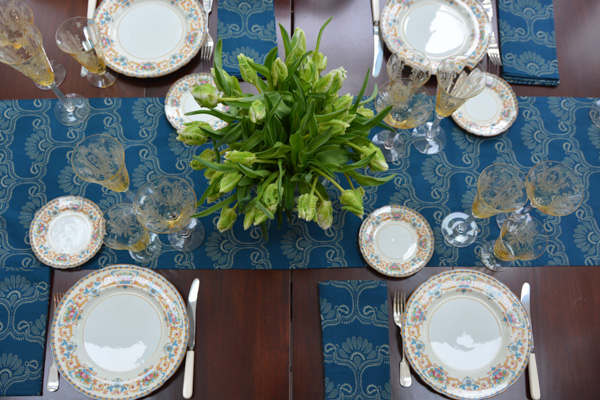 Later that day we stopped in at Williams Sonoma to pick up some hand soap, when I spotted their Victoria Sun napkins and runner in Victorian Blue. Yes! That’s what the colour was – Victorian Blue. It coordinated beautifully. And being the end of the season, was on sale. It took a few calls to different locations to assemble a dozen napkins, but that was fine. Done in a trice, and we were on our way. 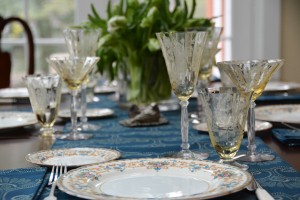 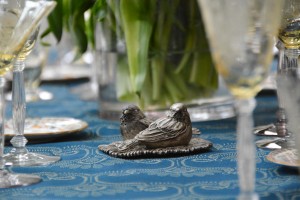 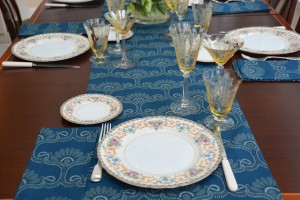 Back home, I happily unpacked and washed all the china. Pairing my new acquisitions with La Fleure Yellow depression glass by Tiffin-Franciscan from Replacement and some white parrot tulips, and the table came together in happy harmony.