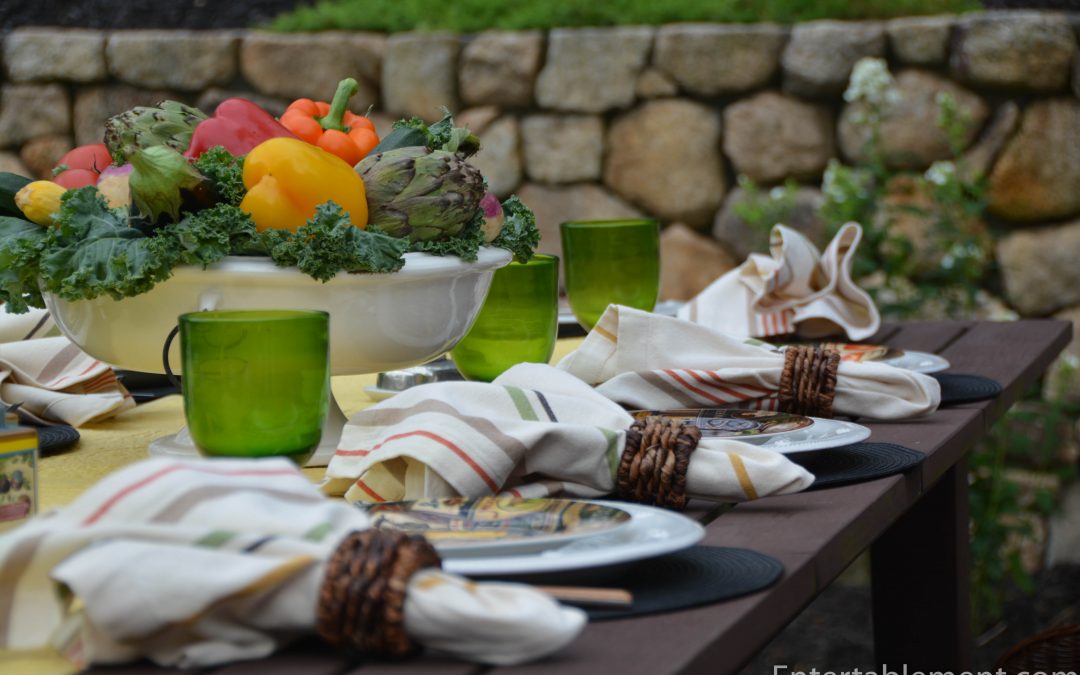 Farm stands bursting with colourful vegetables are the hallmark of summer, and Sakura’s Homestead Pantry by David Carter Brown is the perfect pattern to highlight summer’s bounty. 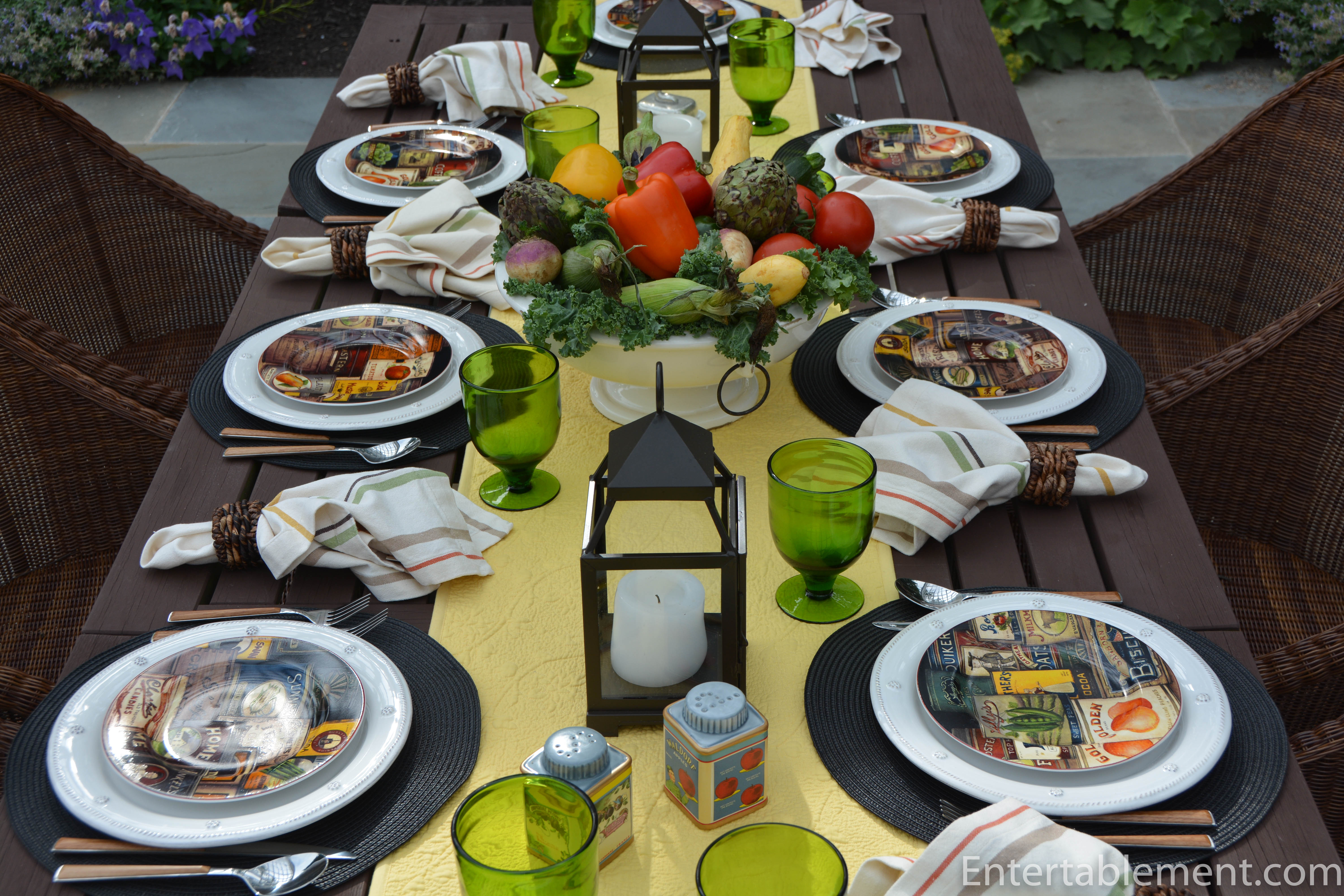 I acquired this pattern in the depths of winter last year, and have been plotting its debut ever since. 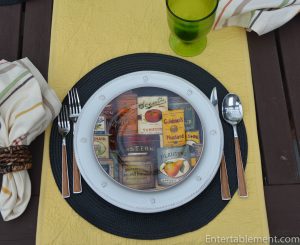 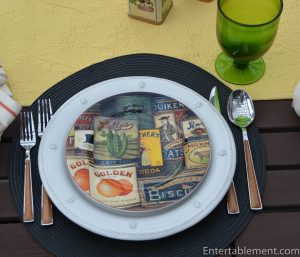 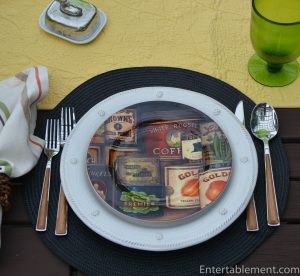 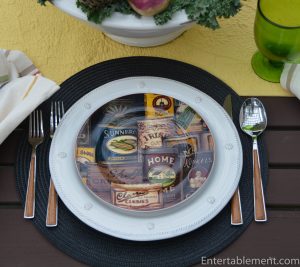 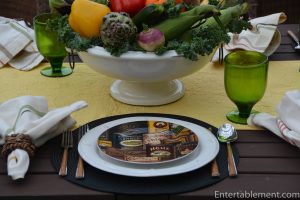 Typical of Sakura’s patterns, there are four different salad plates, each featuring items commonly found in a pantry. The deep, rich colours, complemented by the vibrant yellow of the mustard and peaches tins are warm and inviting. 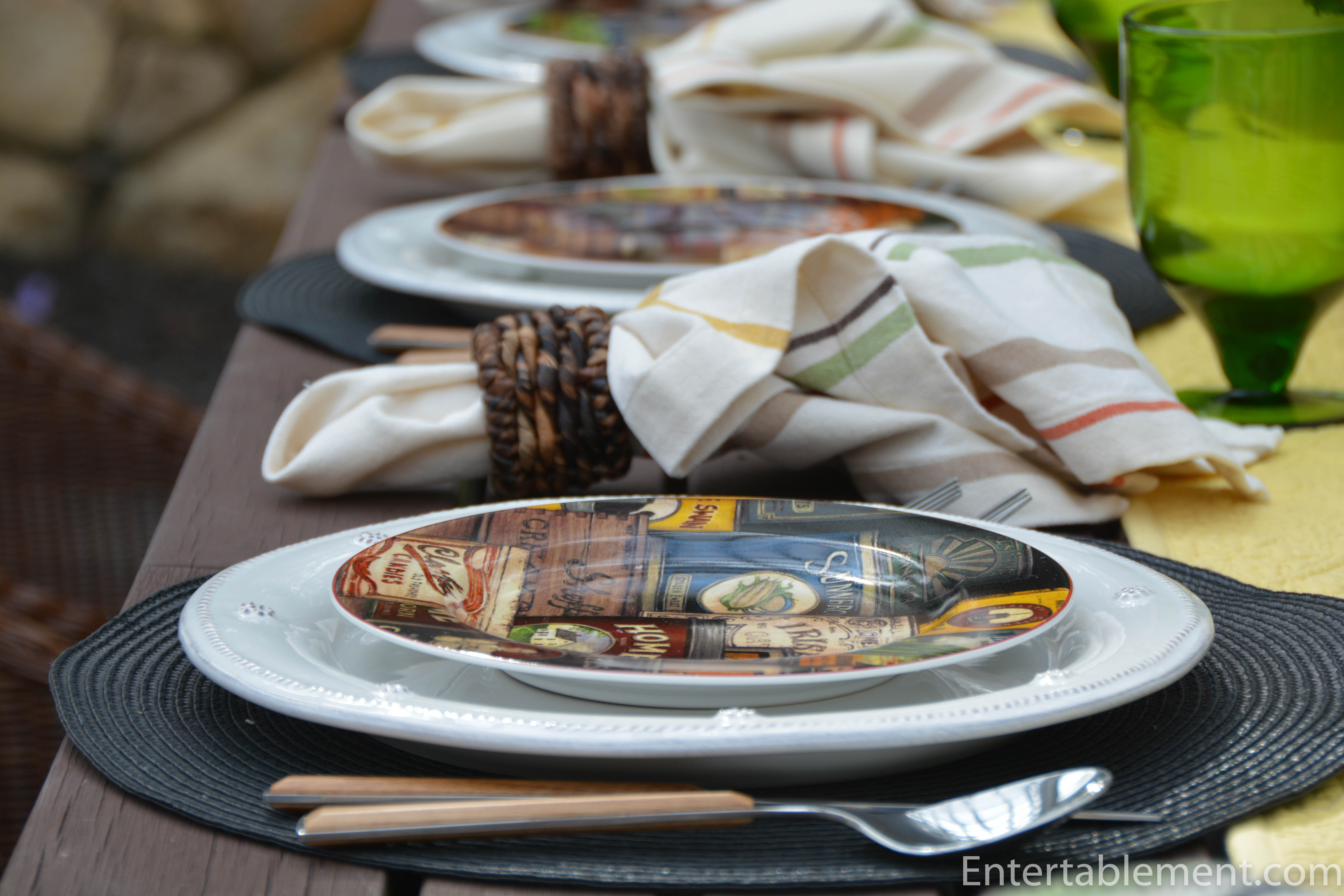 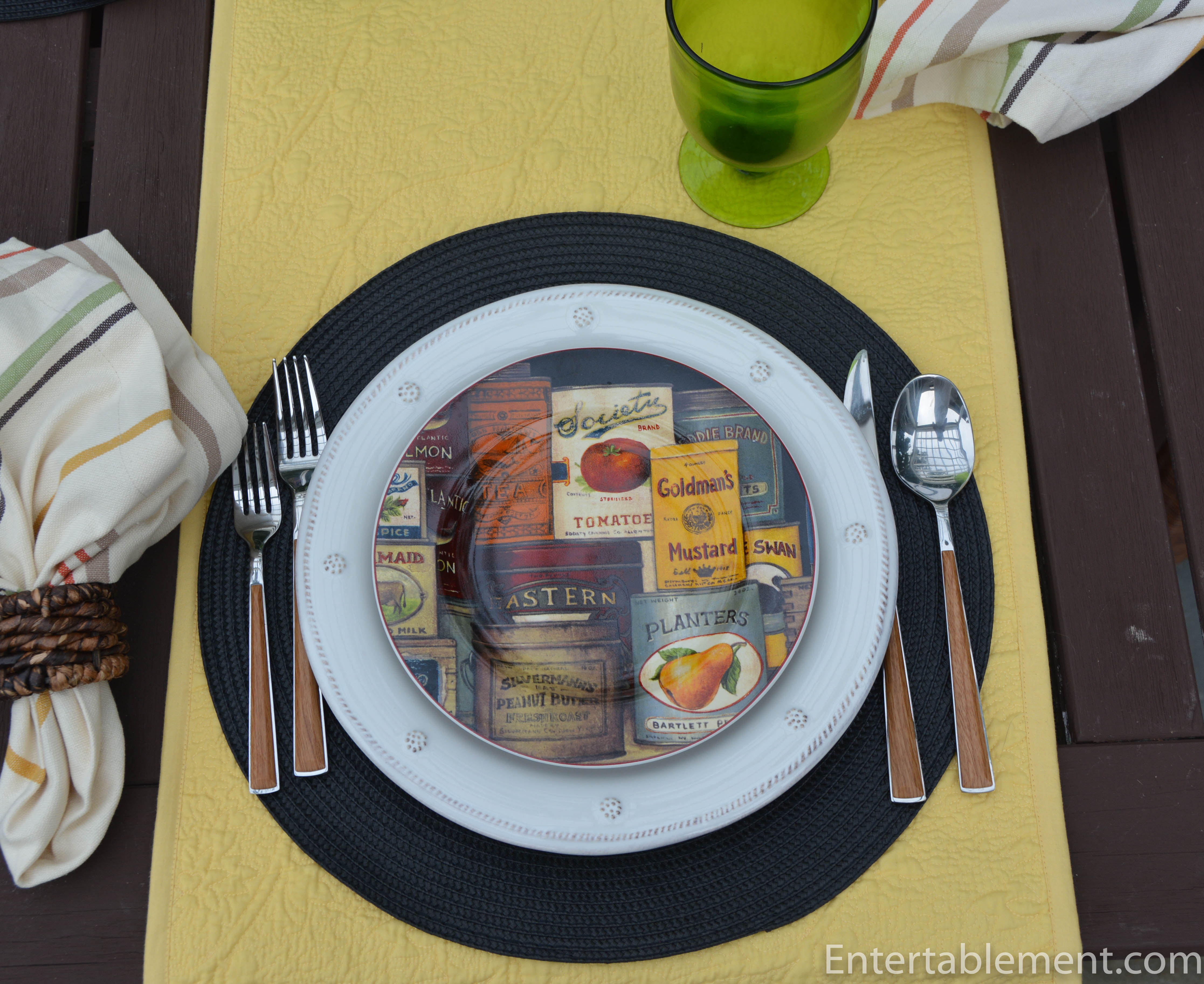 I styled the plates with a combination of rustic elements such as the Sawyer wooden handled cutlery and rattan napkin rings. The soft tones of Juliska’s Berry and Thread Whitewash dinner plates also felt right. I had originally thought of going with cleaner, brighter pieces like stark white dinner plates and checked green napkins, but the effect was more jarring than I’d hoped. 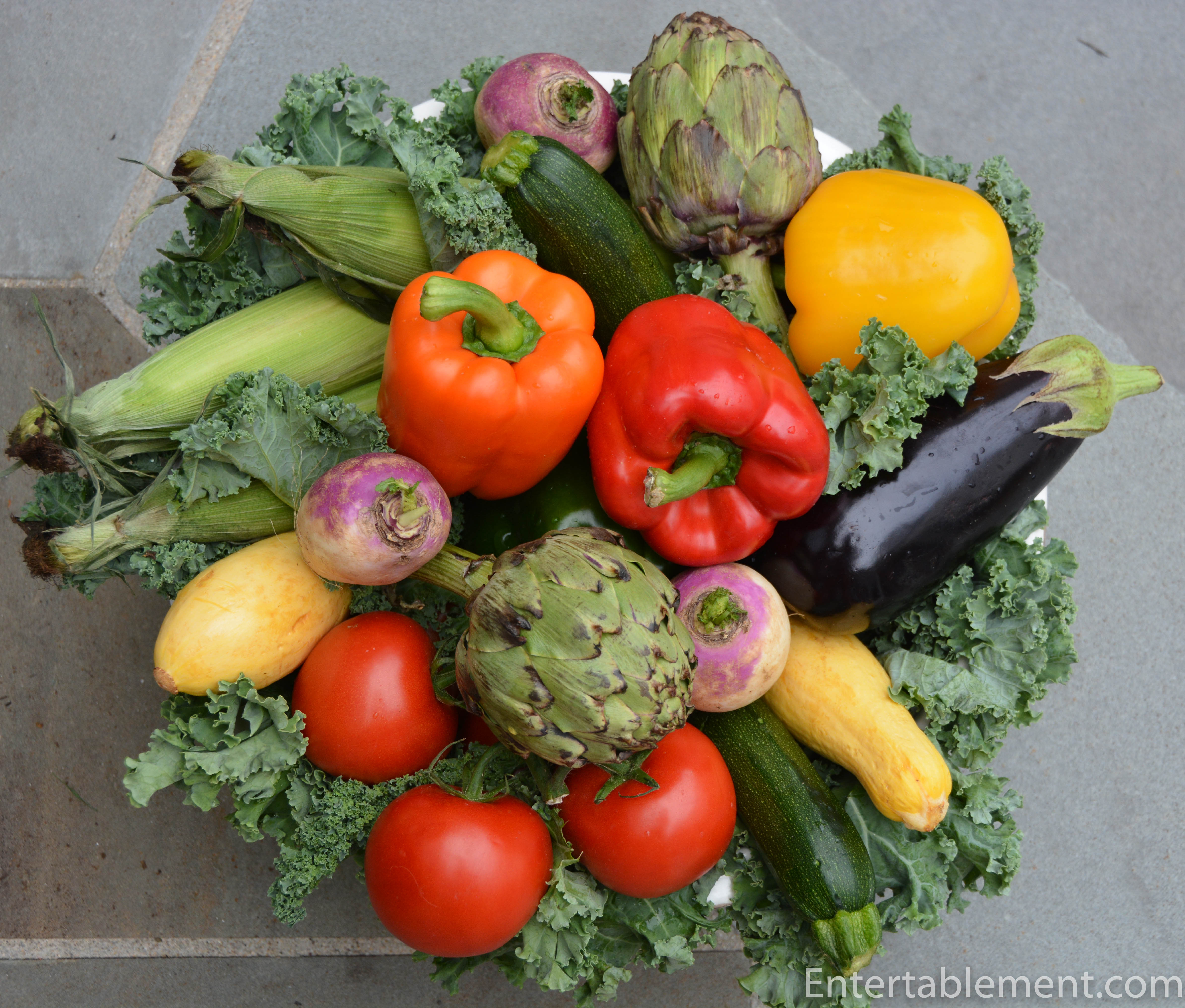 Assembling the vegetable centrepiece was the most fun part of all. I sent a picture of it to my daughter Lauren and she asked, “All from the garden?” to which I responded, “Yes, the garden at Stop ‘n Shop!” 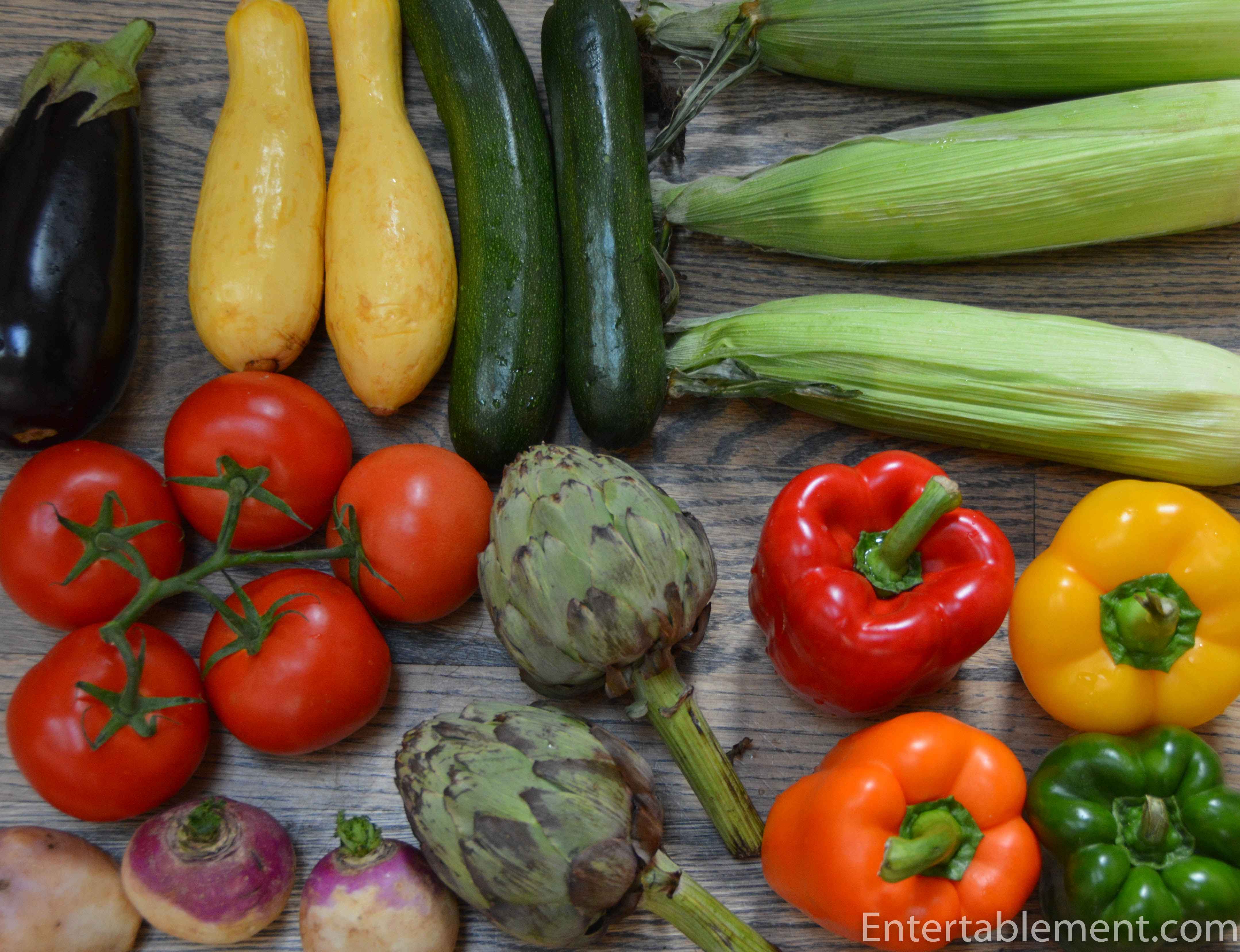 The vegetables have all gone on to star in other roles. The peppers are in a Greek Village Salad. The summer squash is destined for Summer Squash Carbonara and the corn and tomatoes are going into Shaker Summer Corn Chowder today.  I still have to find homes for the artichokes, zucchini and small turnips, but no doubt they will be used. The kale is another story. Bleahhhh –  (unless its heavily disguised in a pasta). 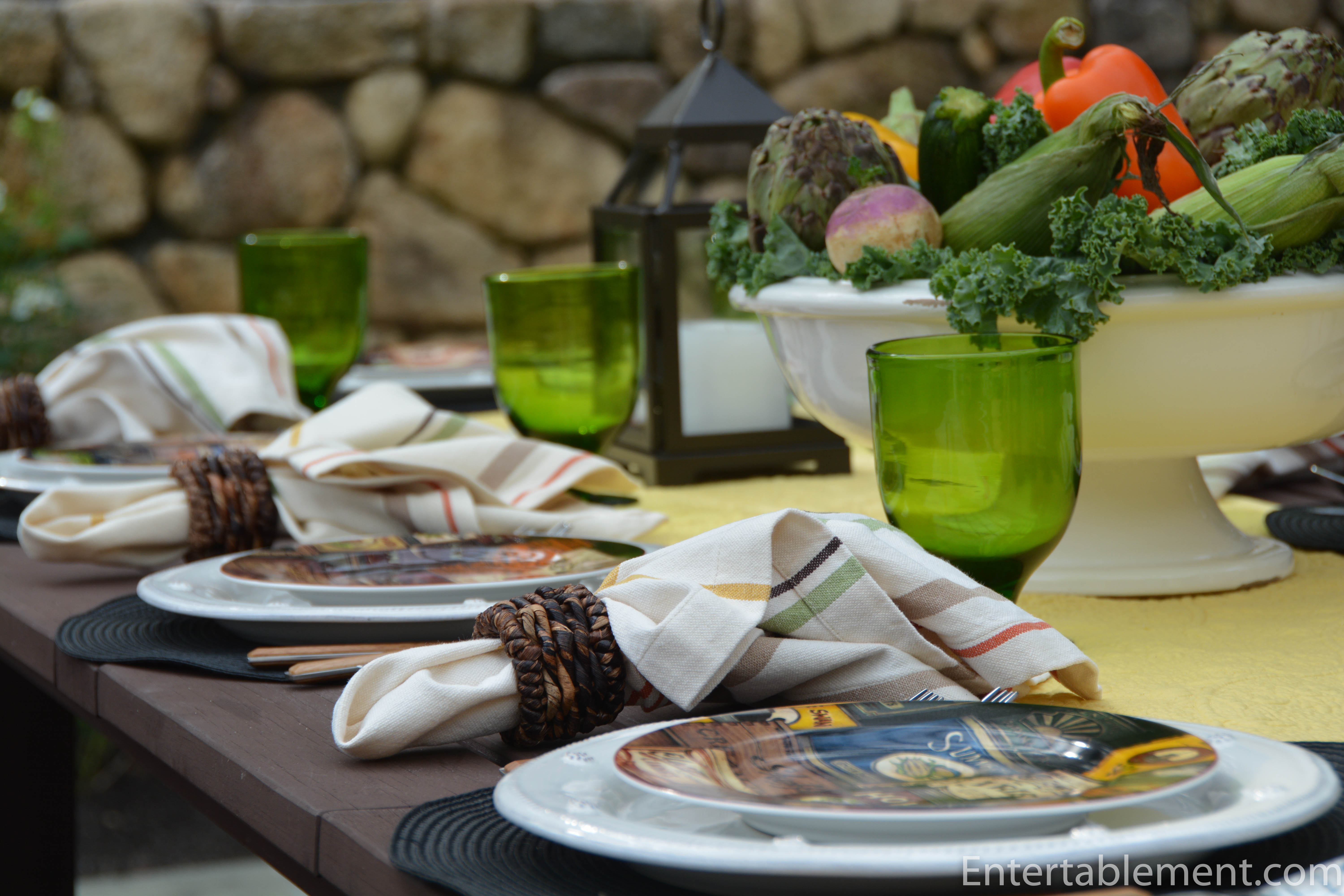 I’ve had the green glassware forever. They were a Williams Sonoma purchase, deeply discounted at the end of the season, and I remember almost sending them back in spite of the amazing price. I couldn’t fathom where I would use such an acid green, heavy goblet. Ha! I’ve used them over and over again. Just goes to show… 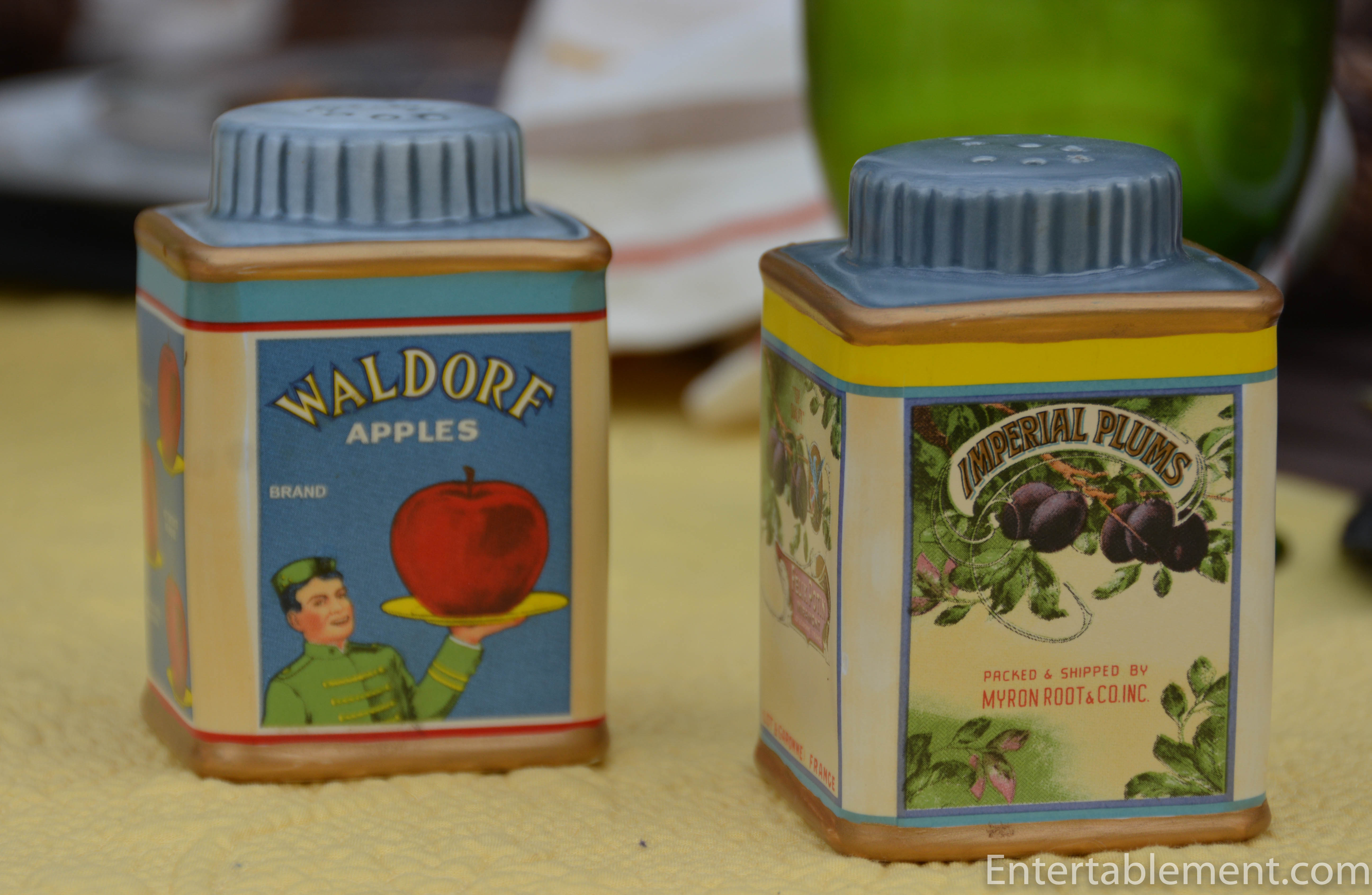 The salt & pepper shakers are also by Sakura, but a slightly different pattern. I can’t remember the name, but I got them on eBay at the same time as the plates were acquired. They fit the theme nicely. 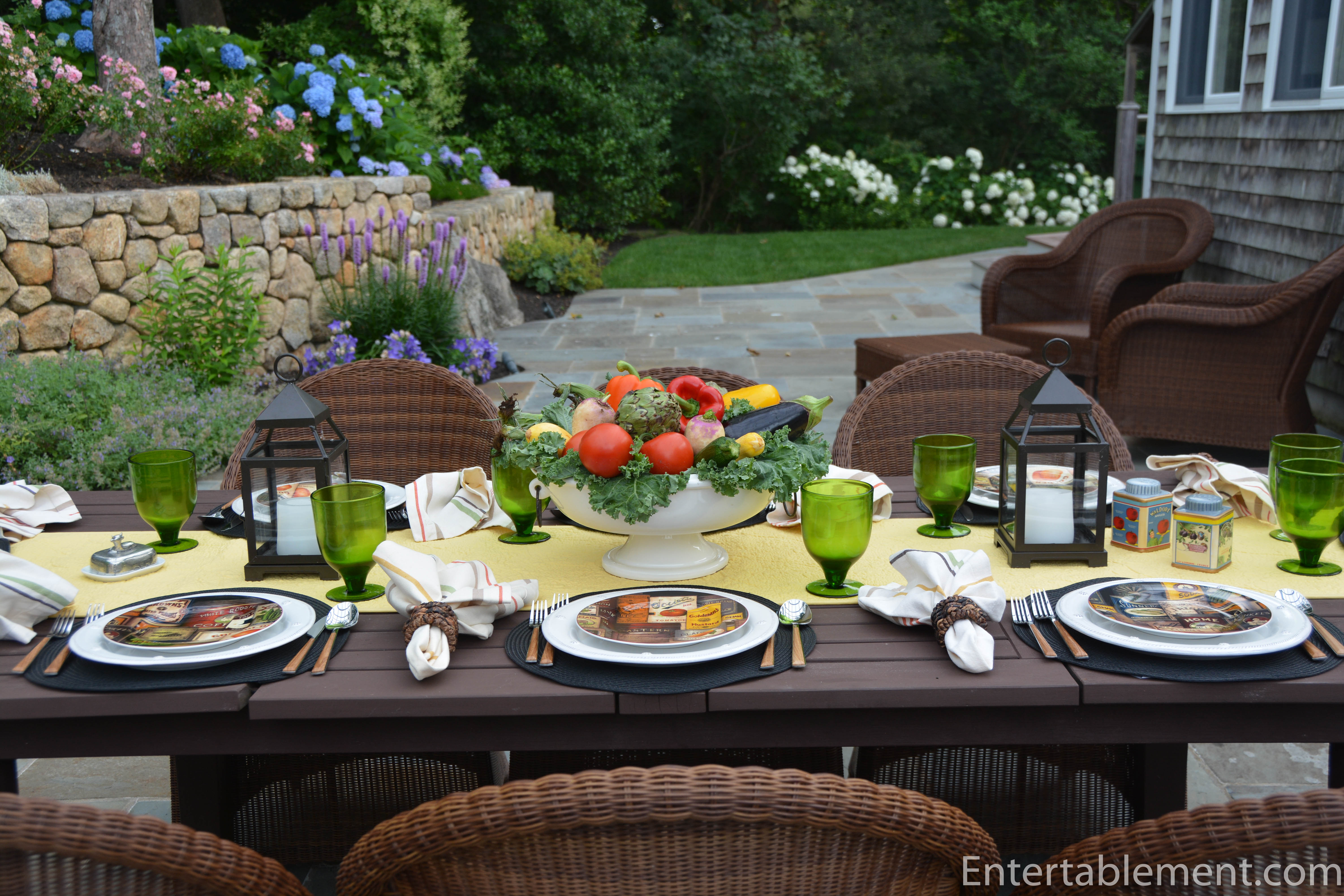 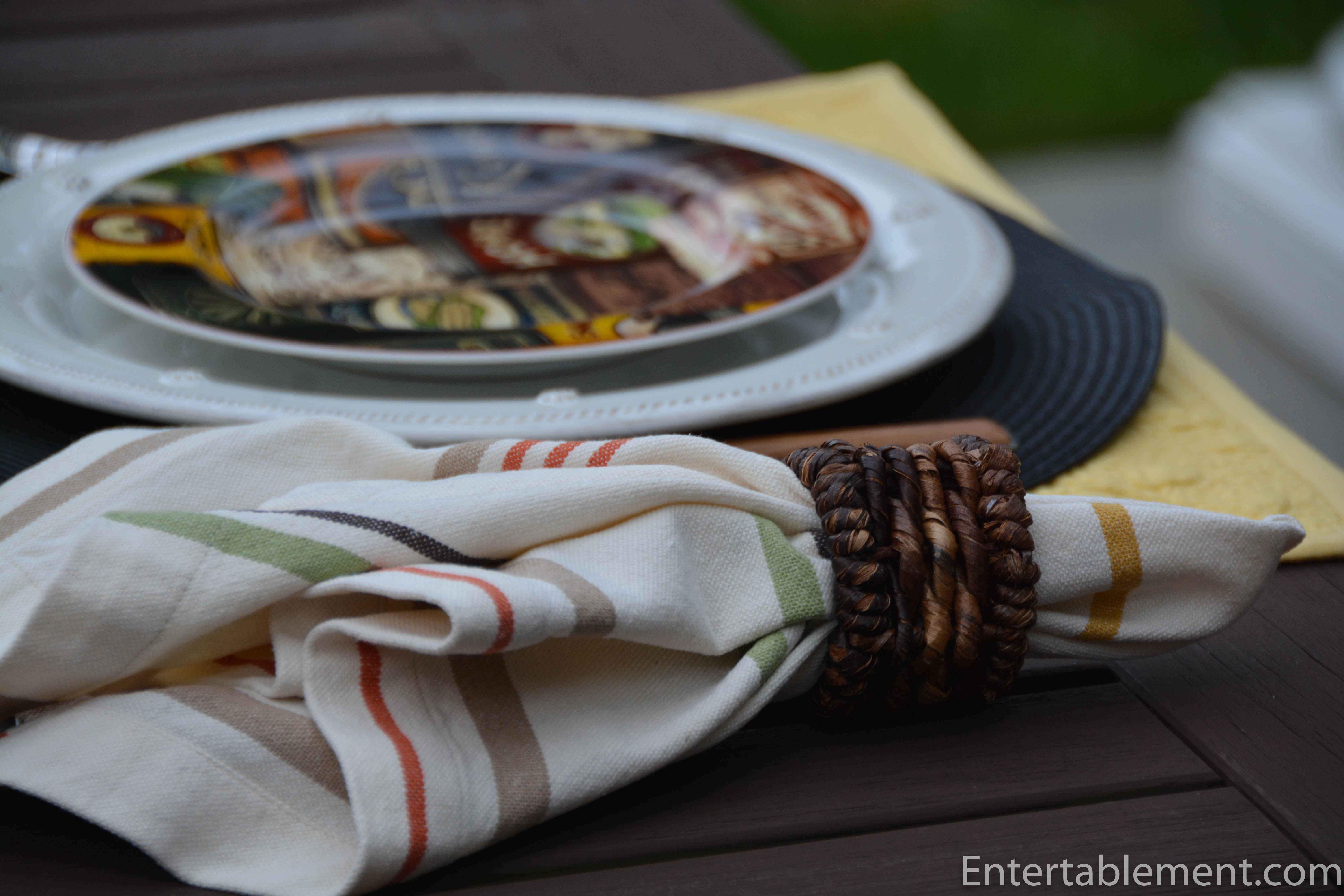 The Madras napkin rings are from World Market. They’re another of those, hmmm, not sure how often I’ll use these, but I think they will be useful.  Oh yes! I use them. 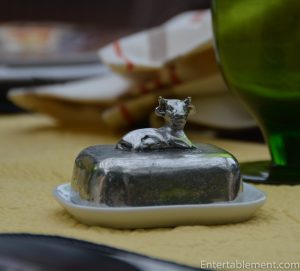 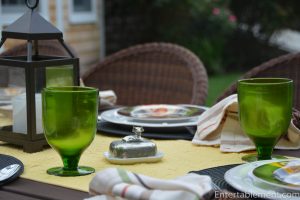 The pewter butter dish is part of the Arte Italica Campanula series, now sadly discontinued. The series includes a small tureen with a lamb on the lid, a honey pot featuring a bee and a set of tiny jars with bunnies, which I often use for jam. You can see all those here. 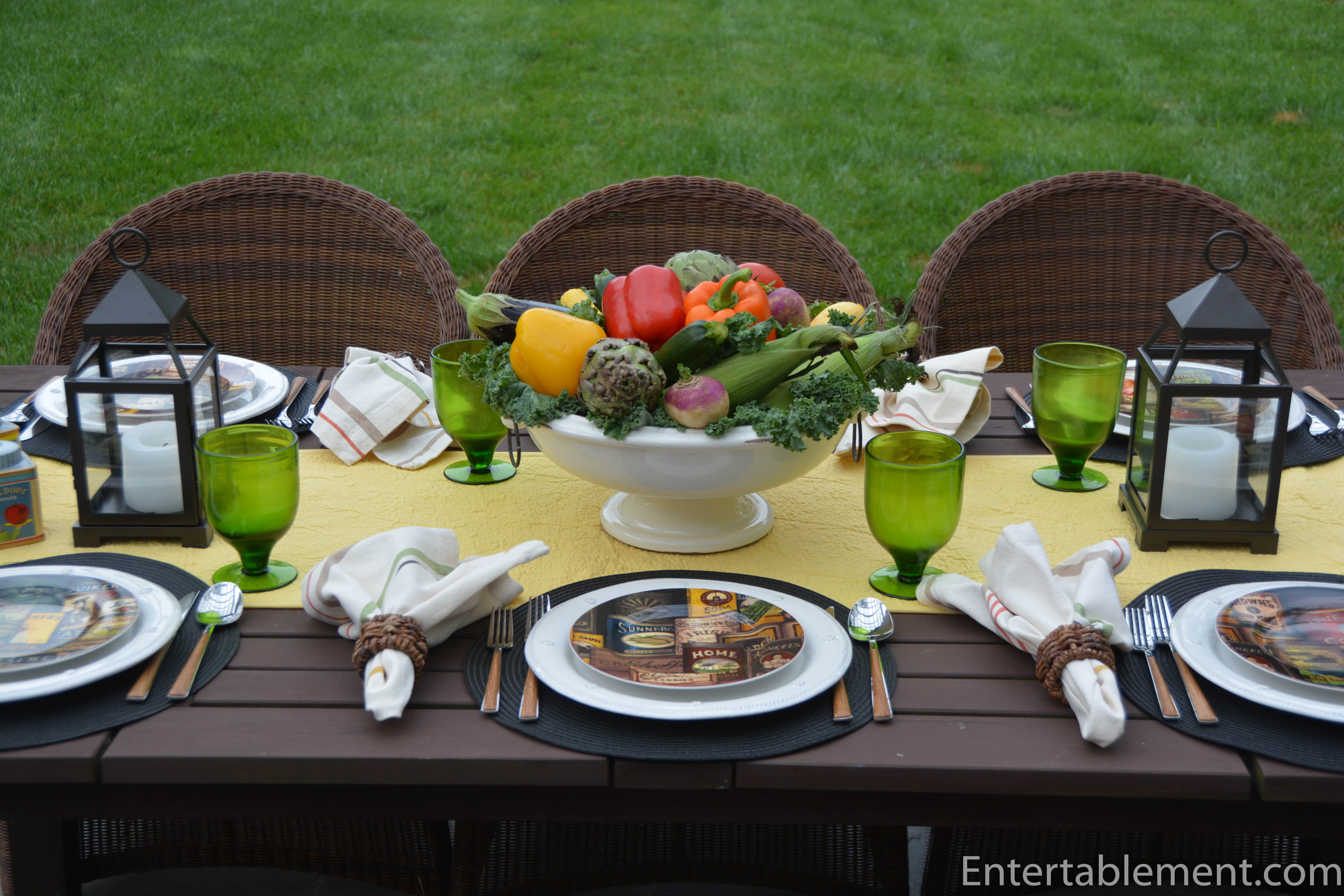 The Malta lanterns are from Pottery Barn. The deep bronze colour echoes the dark browns and ambers in the plates. 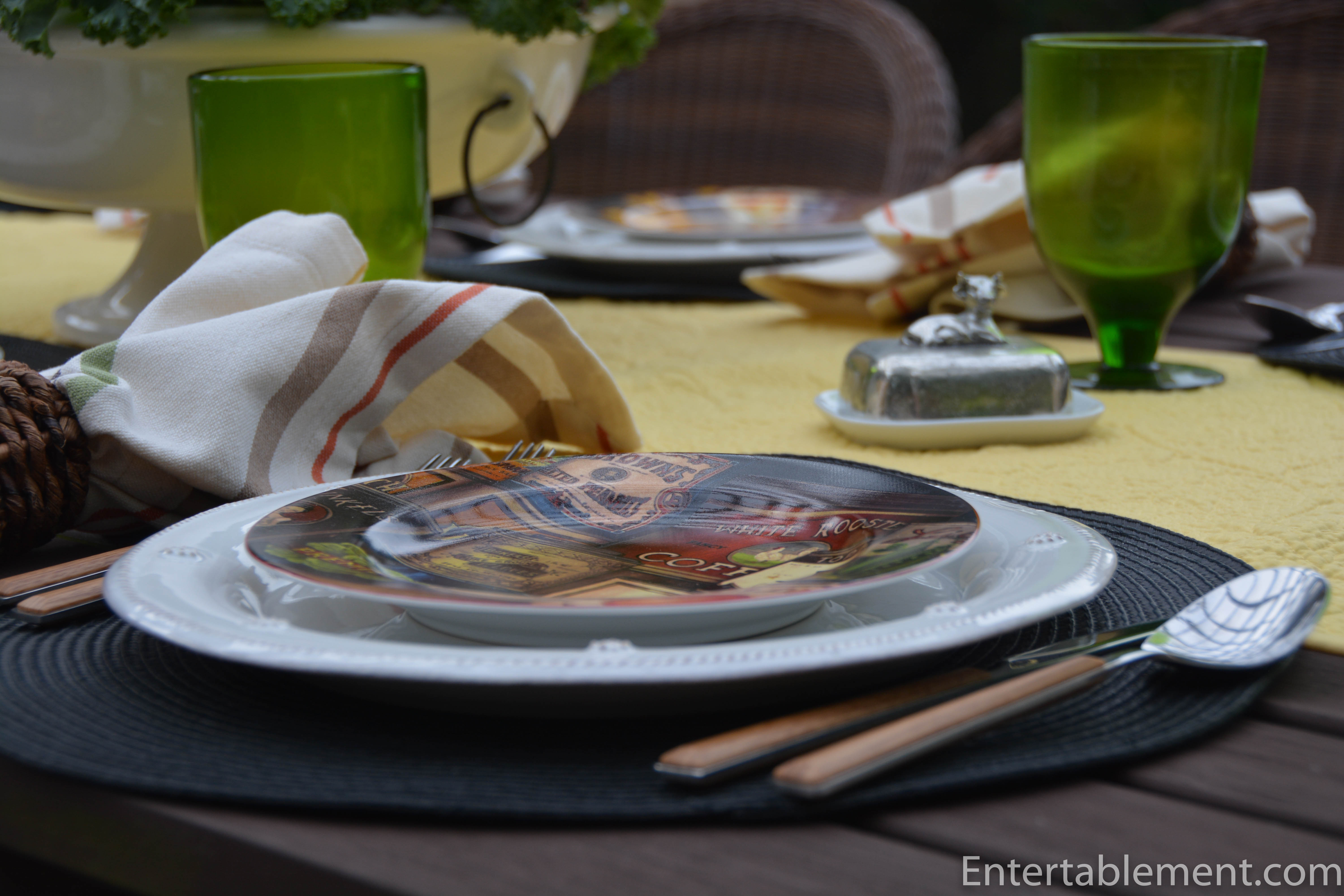