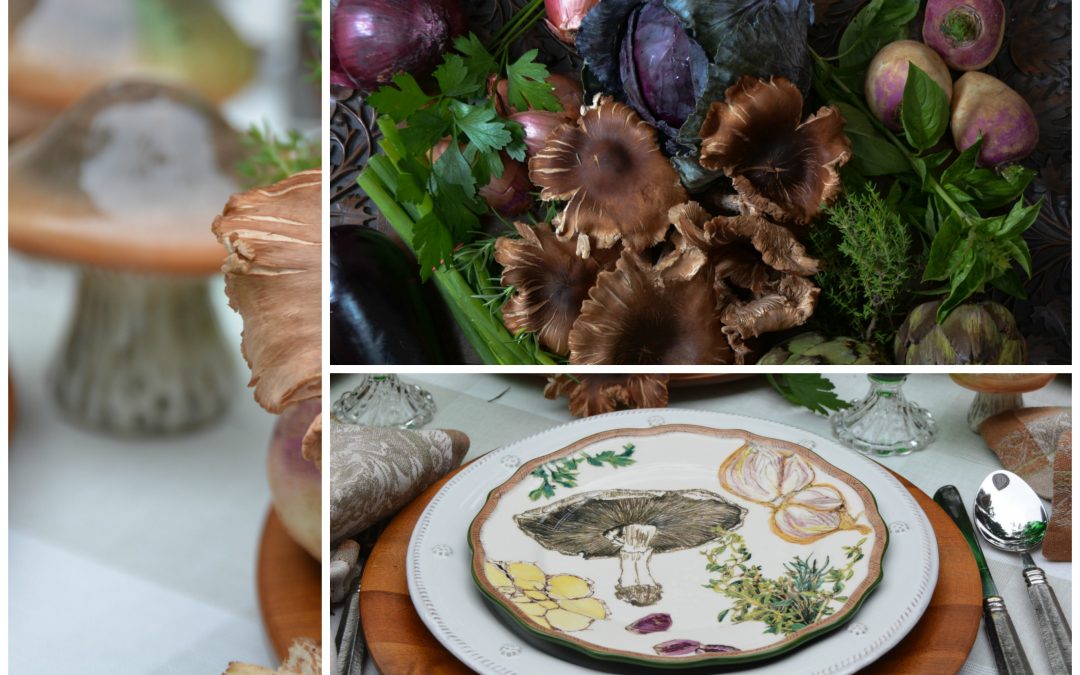 We walk a lot. It keeps the three golden retrievers happy, fit and from getting into too much mischief. It keeps us humans fairly fit, too. It also makes for great foraging for centrepieces! 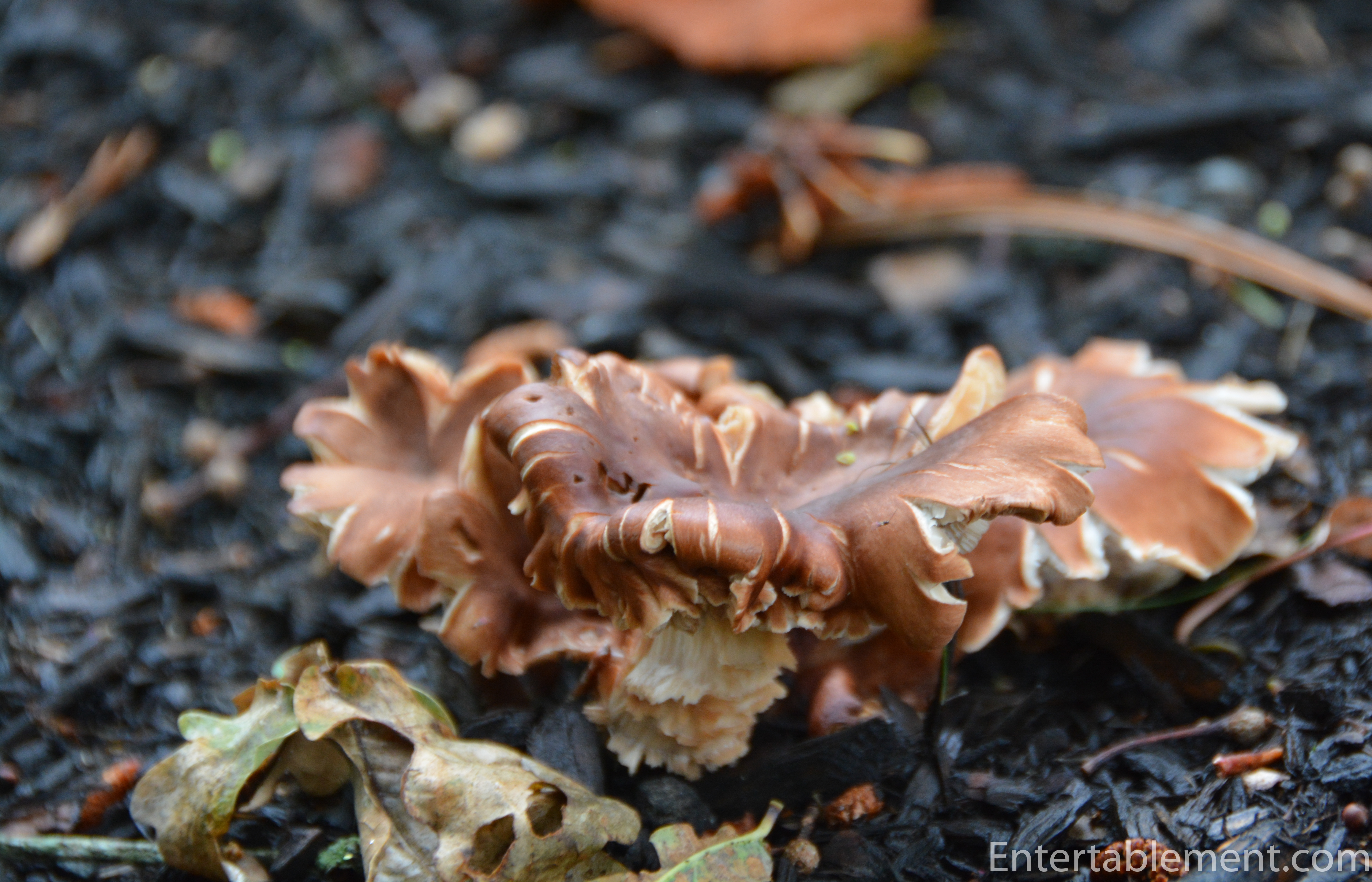 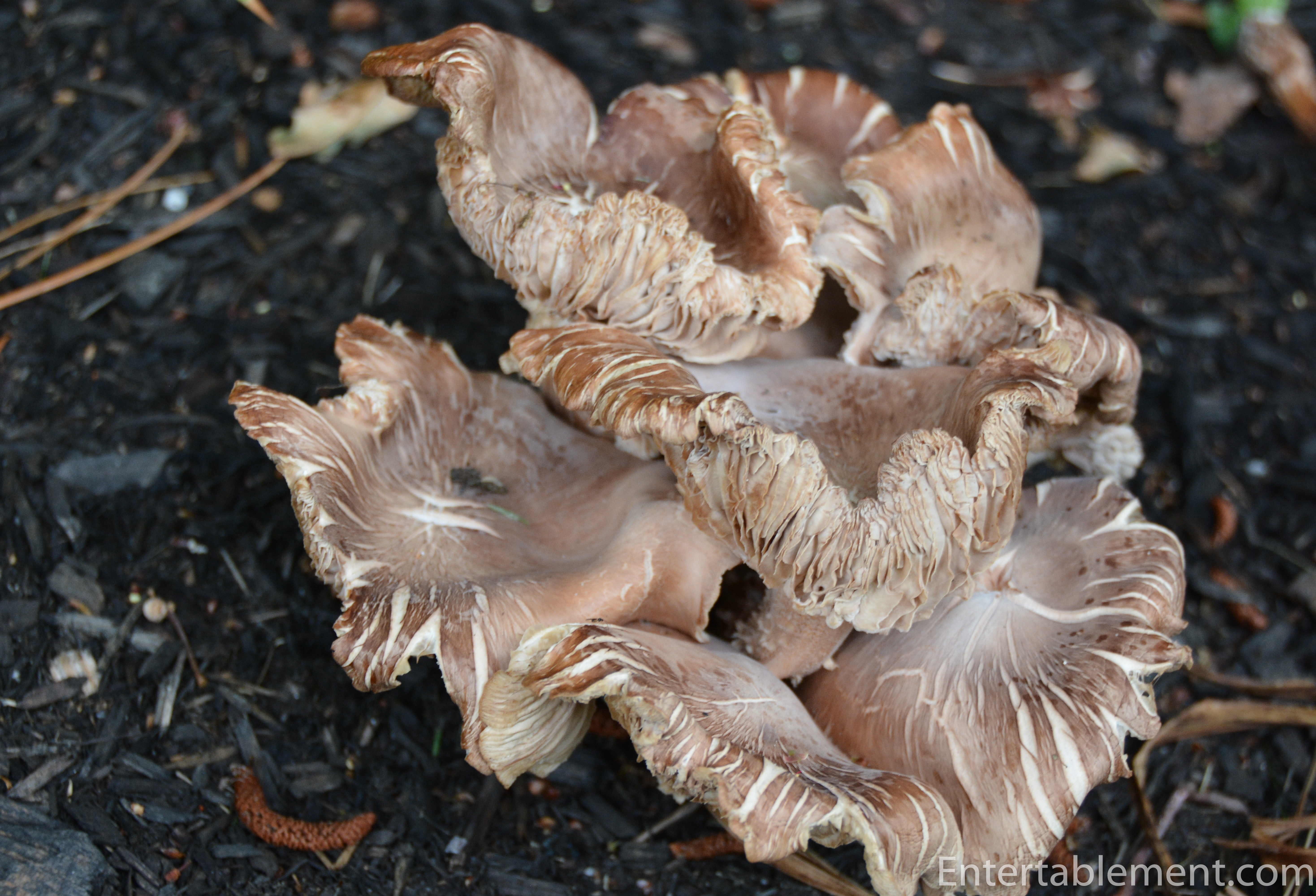 These mushrooms were growing on the edge of our garden nearest the wetlands. This is the first time I’ve noticed them, though they may well have come up in previous years. They immediately called to mind my French Market plates (which I always think of as my “mushroom plates”) from Williams Sonoma.

The plates are from several years ago, and feature a variety of vegetables and herbs typically found in a French Market: aubergine, shallots, red onions, scallions, artichokes, red cabbage, garlic, thyme, rosemary, parsley, and of course, mushrooms. 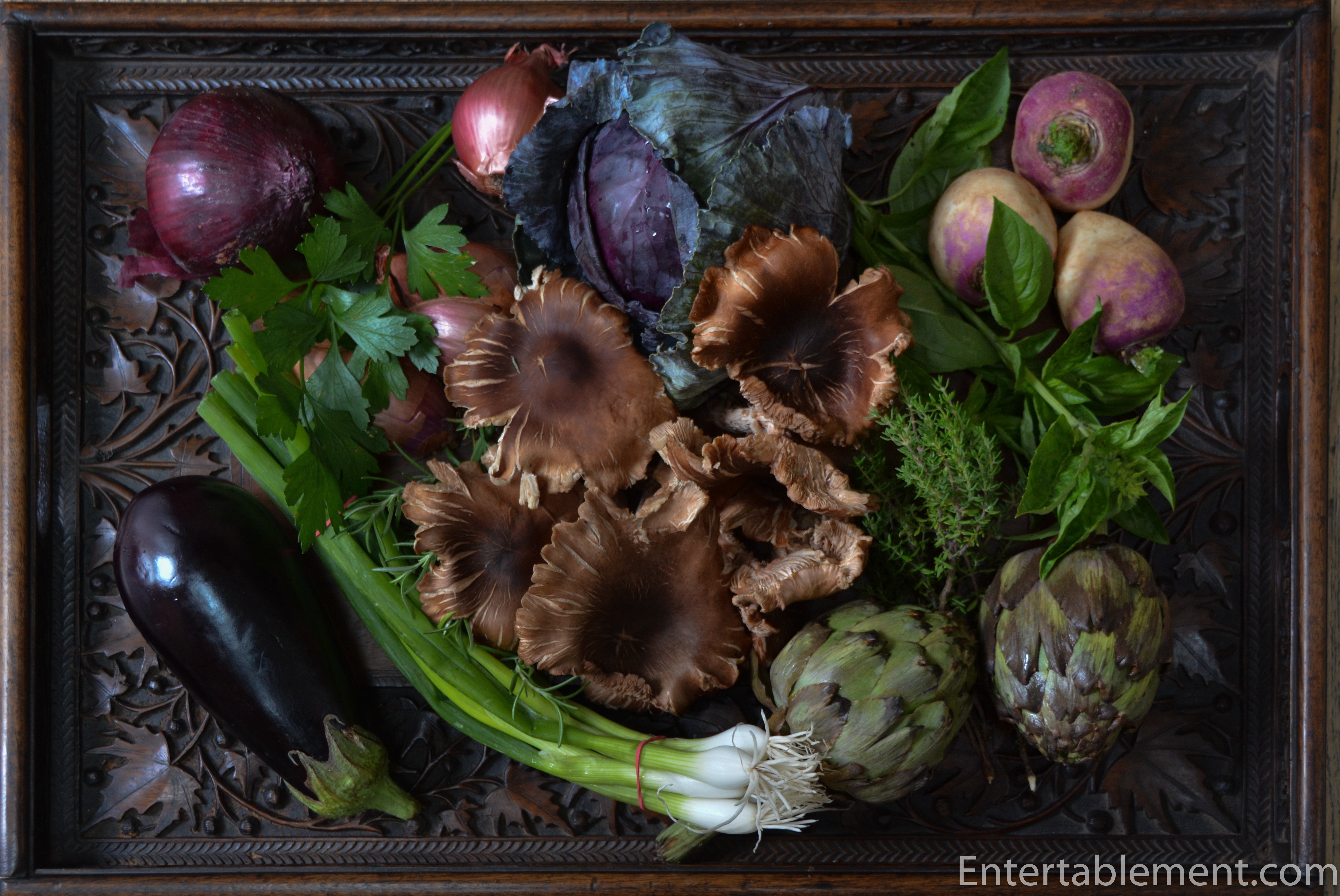 So I went a gathering, though at Stop ‘N Shop, not a French market, more’s the pity. 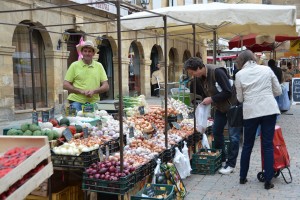 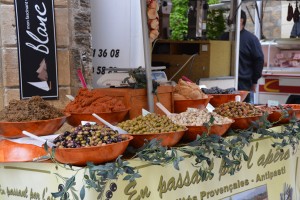 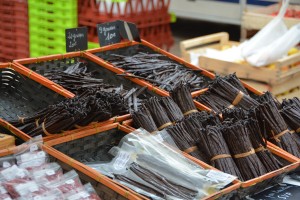 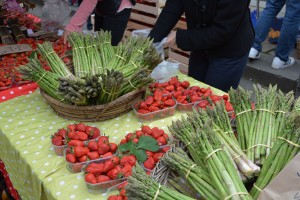 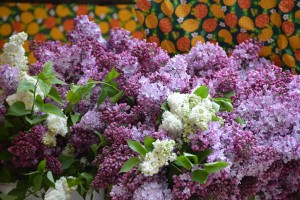 We visited the famous market in Sarlat, France, during one of our overseas trips. The Enterablement Abroad post is here. It was springtime when we went, so the strawberries and asparagus were at their peak. And the lilacs!  Heavenly. There is certainly something to be said for the French way of life when it comes to food. 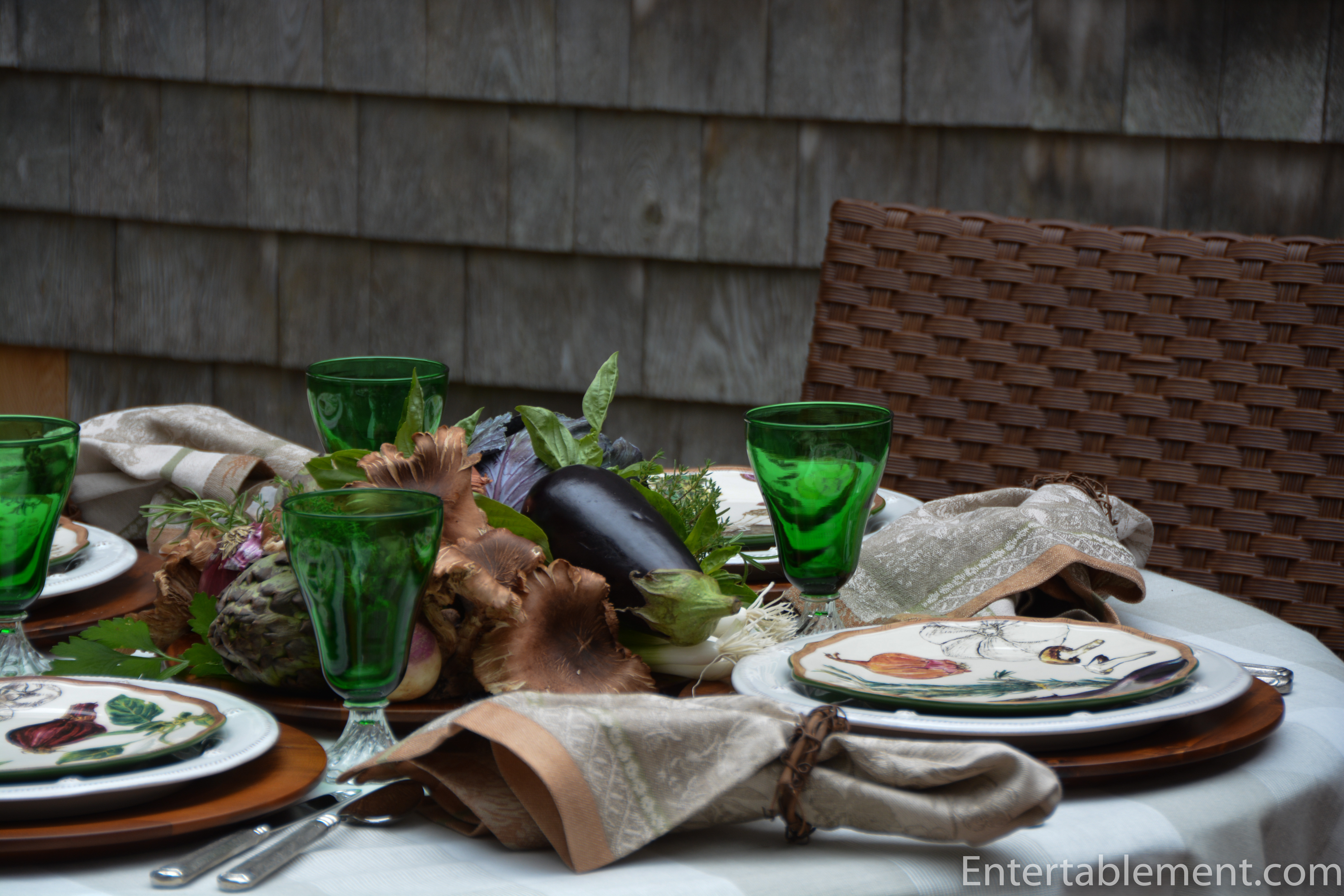 Once I had the vegetables and herbs gathered, it was a simple matter to put together a centrepiece. 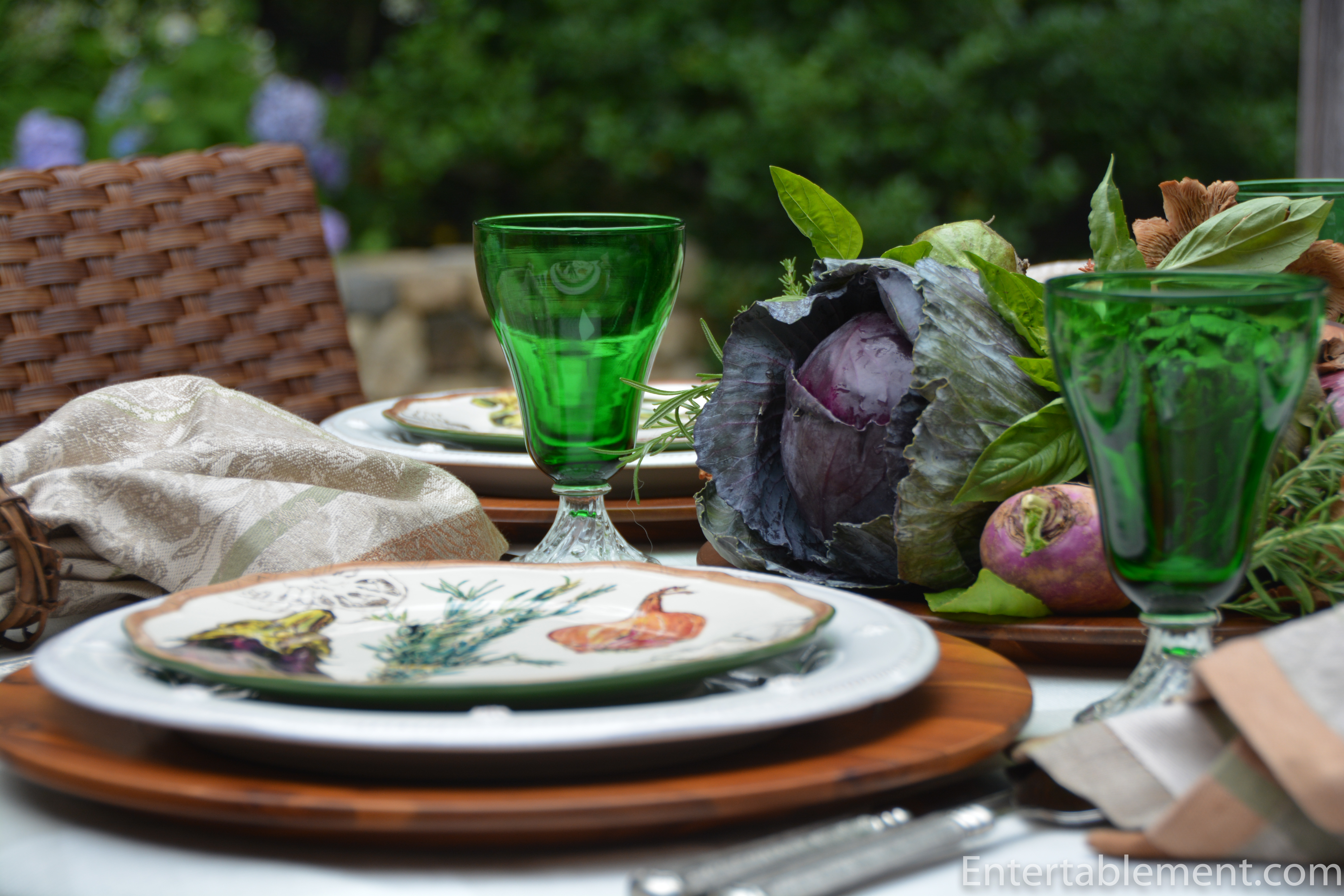 Vintage Colonial Dame Green iced tea glasses were a natural fit. I got mine from eBay, and they’re also available at Replacements.com. 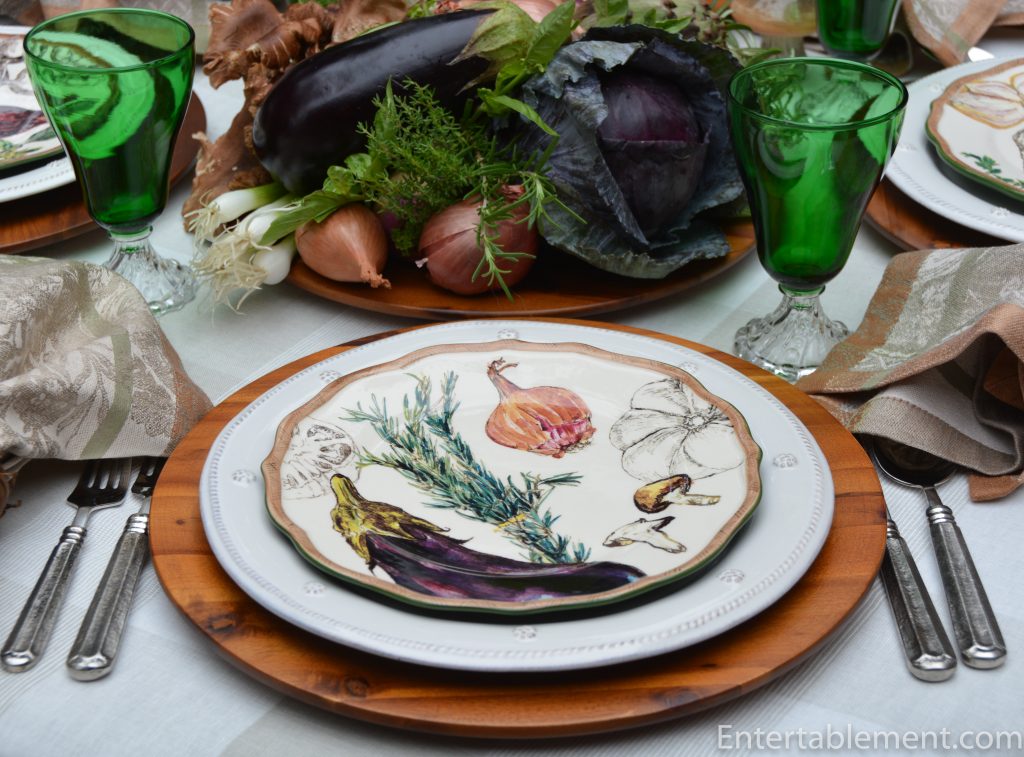 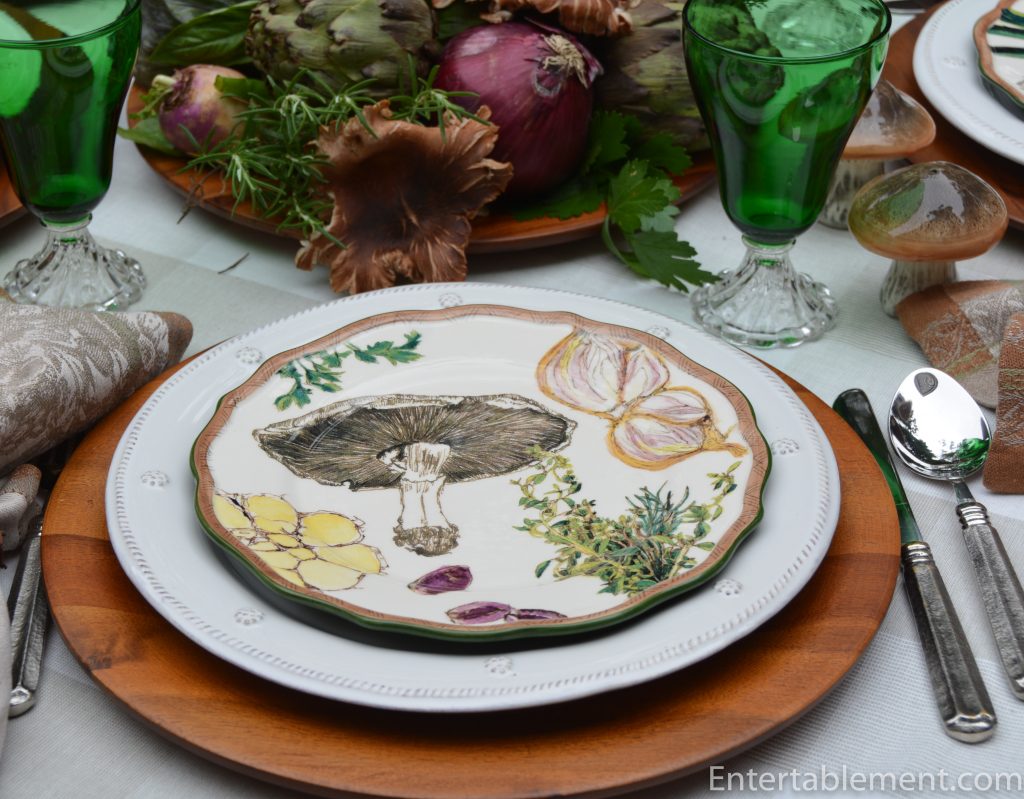 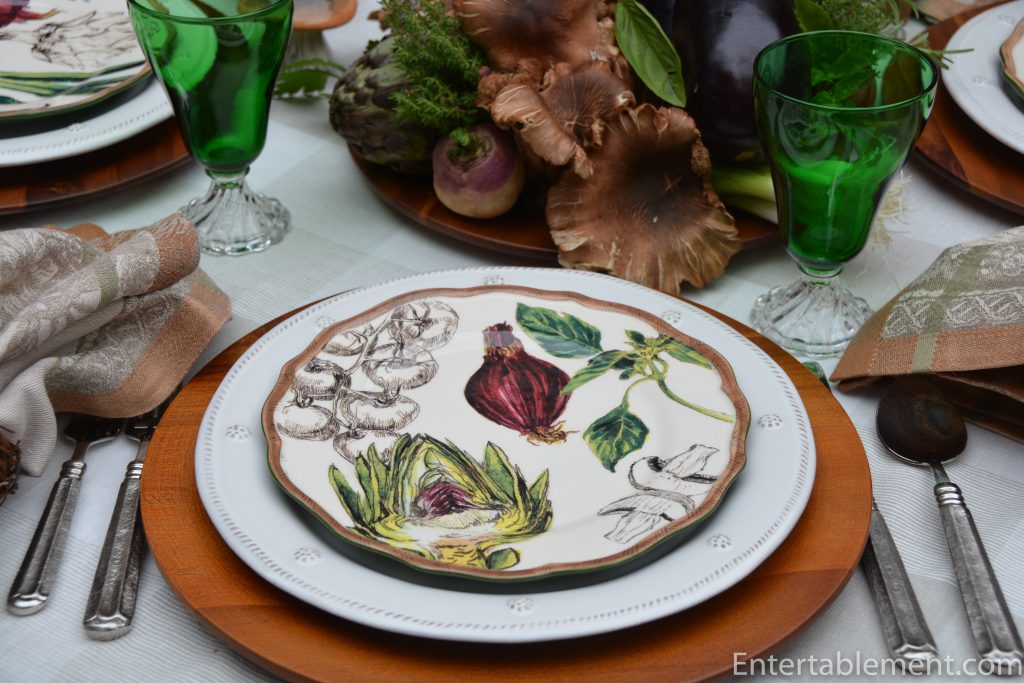 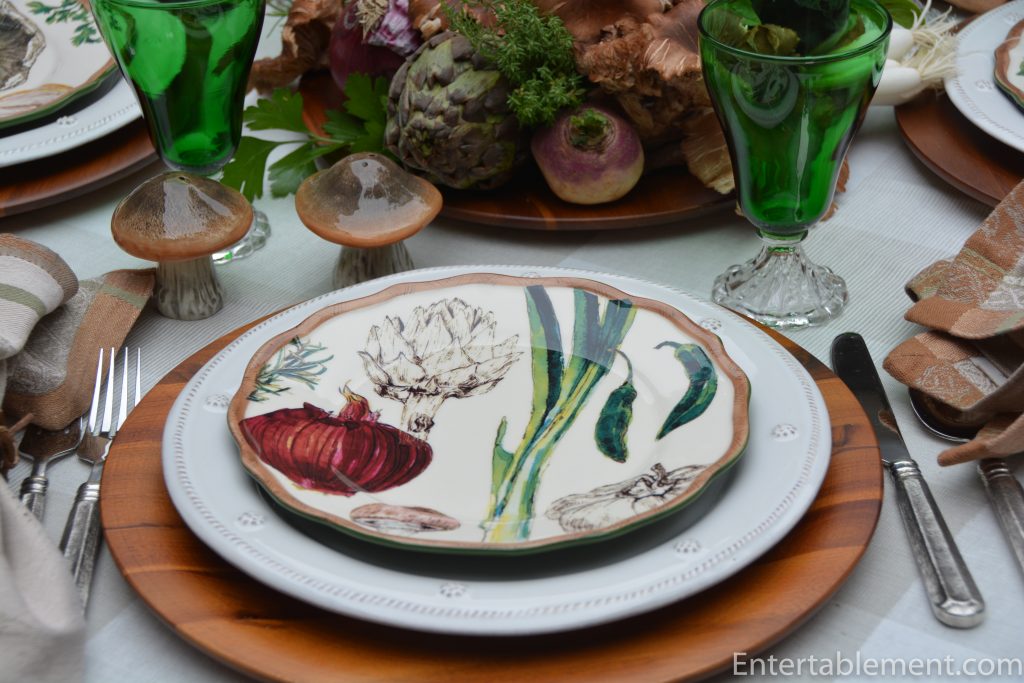 Each plate focuses on a different vegetable, yet the pattern is very cohesive, with a softly scalloped edge in taupe. I used Whitewash Berry & Thread dinner plates from Juliska, which has a similar taupe undertone. The wooden chargers are from Amazon.com. 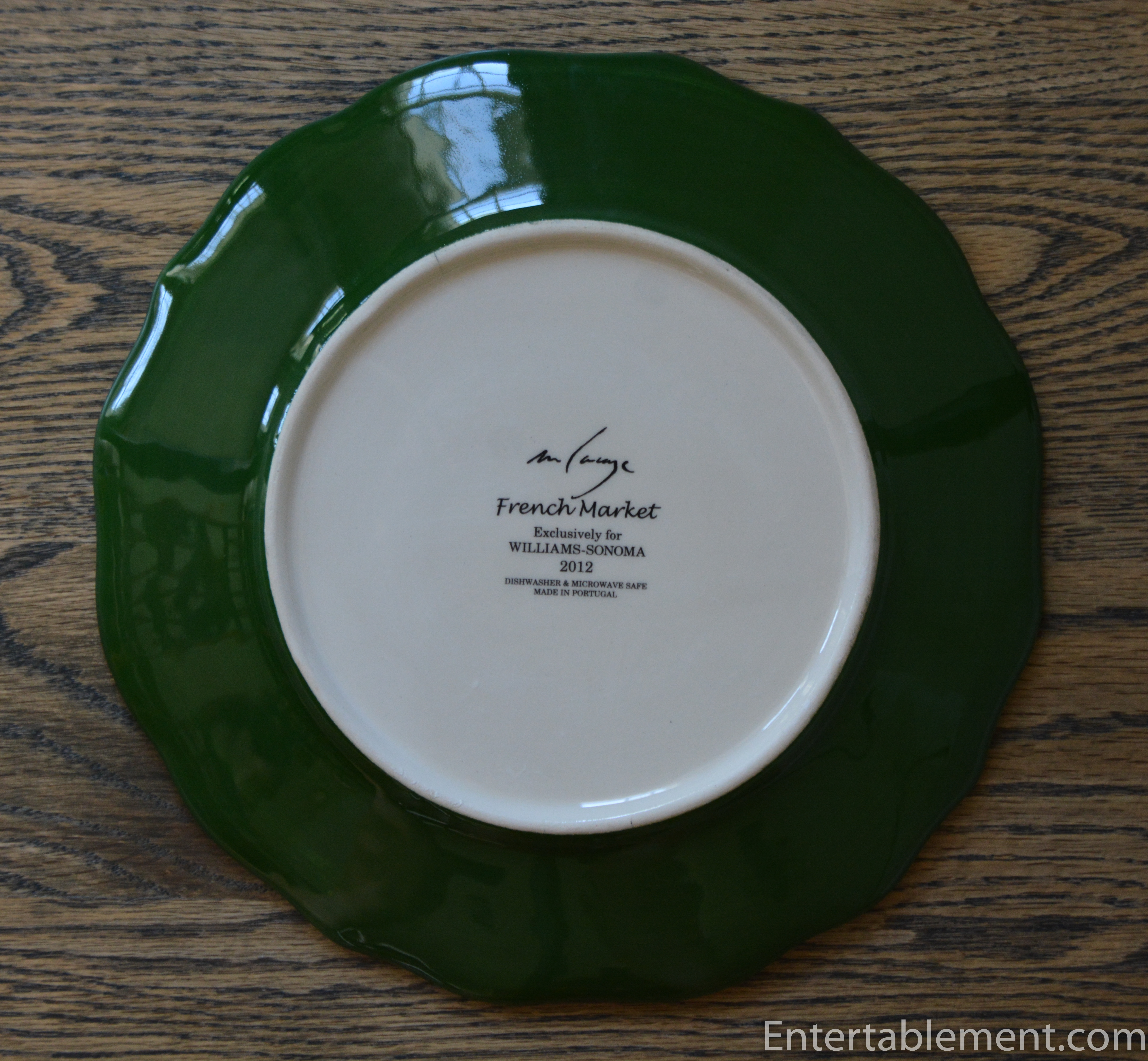 The green in the pattern and on the edge of the plates is particularly pleasing. They’ve carried the green right over onto the backs of the plates, which is a nice feature. 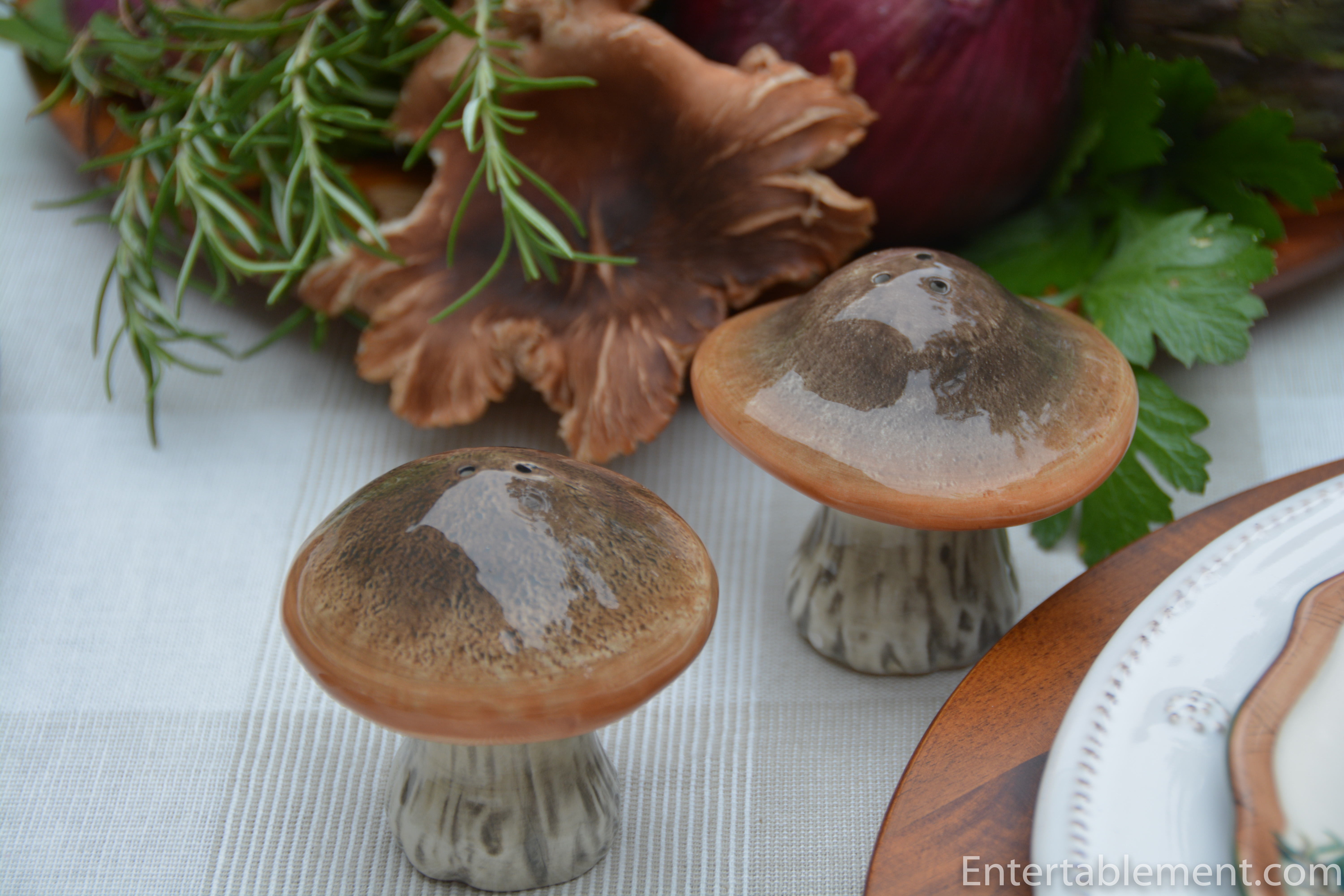 I particularly love the detail on the stems of the mushroom salt & peppers that came with the plates.

The French Jacquard napkins are from Williams Sonoma several years ago. They have similar patterns each year, though the colours change a bit. This year they have both a gold set and a pumpkin coloured set. They’re equally attractive. The tablecloth is from Homegoods. The napkin rings are simple 3″ grapevine rings from Amazon.com. The Danieli pewter style cutlery is from World Market (currently on a great sale!). 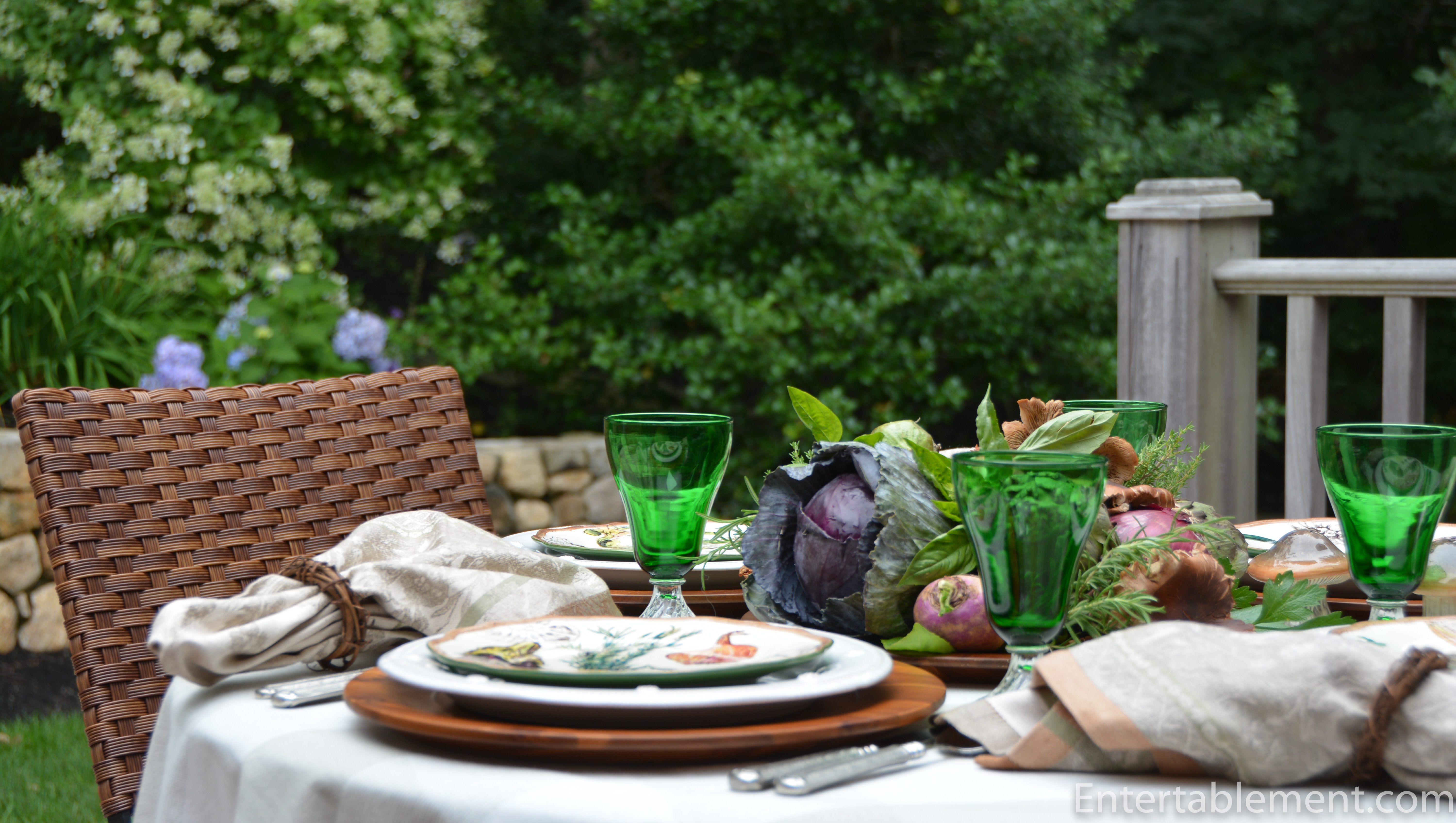 A fitting tribute to the bounty of summer, don’t you think?