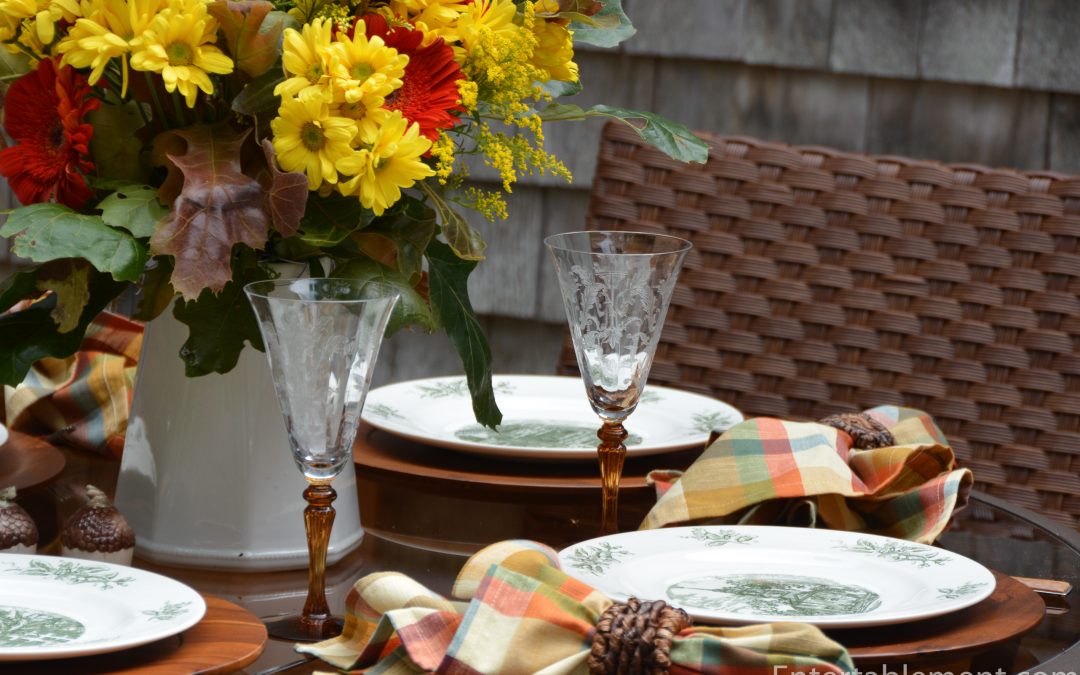 Inspiration for table settings comes from all over the place. I never quite know when or where it’s going to strike. Sometimes it’s a flower I’ve fallen in love with, or one that shows up everywhere I look, luxuriously in season. Other times it’s an unusual accessory or linen pattern. Lots of times it’s the glassware. Most often, though, it’s the plate itself.  My antennae are always up for interesting plates, especially series plates designed around a common theme. 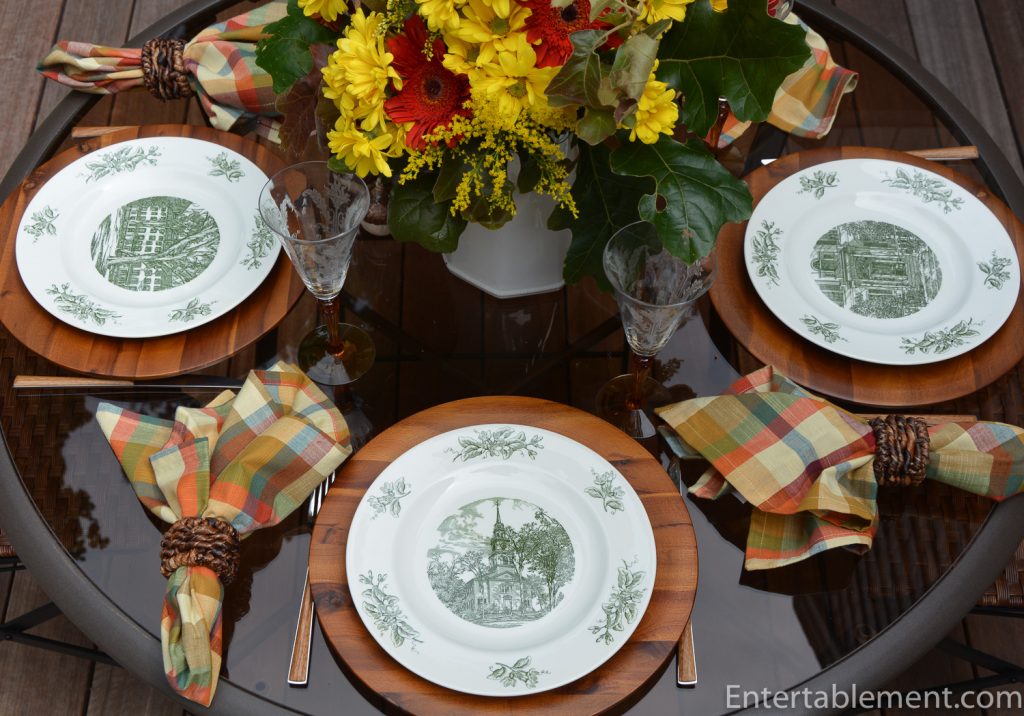 These green transfer ware plates caught my eye on several fronts. First of all, the attractive pattern on the border renders them a very useful backdrop for any number of dessert plates. 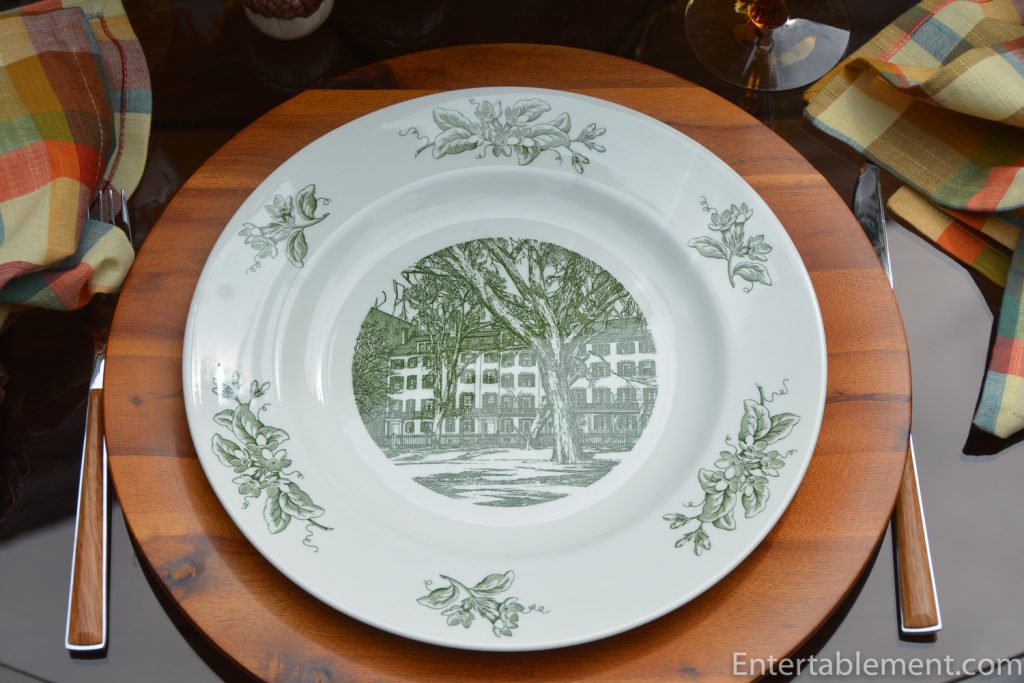 Secondly, the central part of the plates depict scenes from in and around the Boston area. This one is the Windows on Beacon Hill. 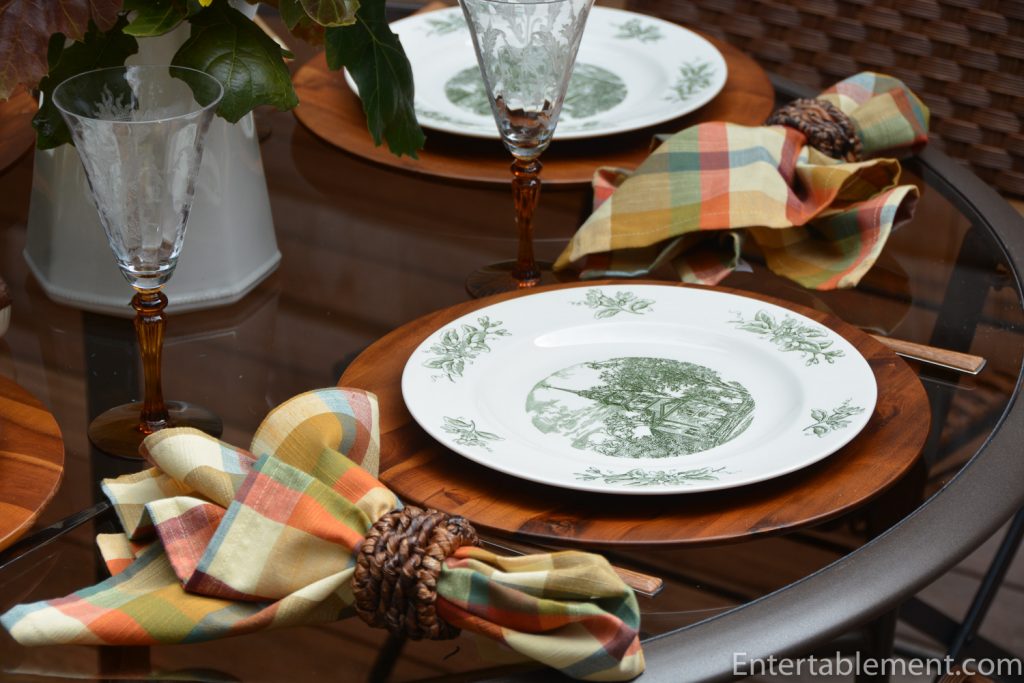 Lastly, they’re green. As a neutral, it’s unbeatable. It complements a whole bunch of colours, pale and vibrant (think leaves and grass), which is important, particularly given my affinity for floral patterns.
This pattern was was commissioned by the Thomas Long Company. Now known as Long’s Jewellers, according to their website:
“Long’s Jewelers is a family-owned and operated full-service jeweler with five stores throughout Massachusetts. New England’s love affair with Long’s began in 1878 when Thomas Long, a Massachusetts native, opened his Boston-based jewelry business. Since then, Long’s has become the foundation of Boston’s luxury jewelry and timepiece market.”
That explains why the series of plates focuses in and around Boston. Gotcha. 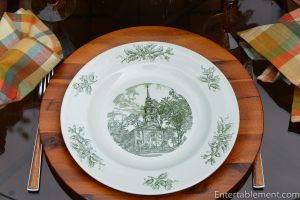 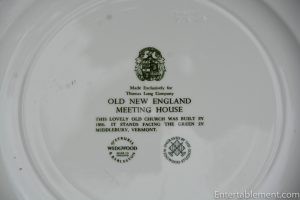 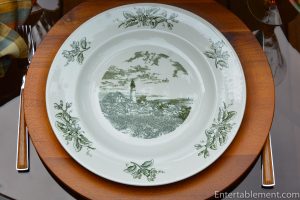 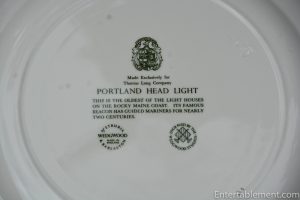 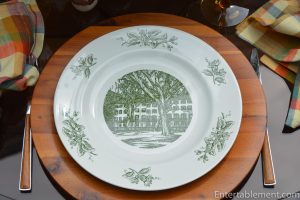 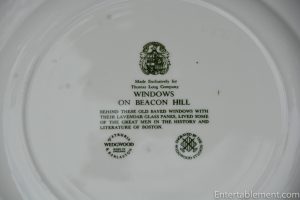 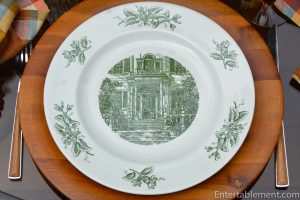 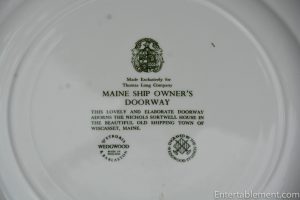 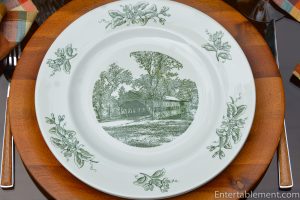 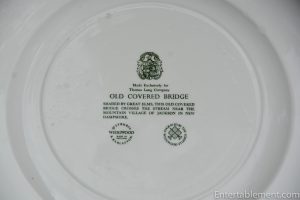 Of course, I had to have them!
I don’t know if the eight plates were created all at once, or one at a time as an annual thing, like the Christmas Carol plates produced by Shenango. Intel is scarce on the subject. Ruby Lane Antiques sold an ashtray some time ago and indicated the pattern was produced between the late 1950s and the 1960s but few other details are available. 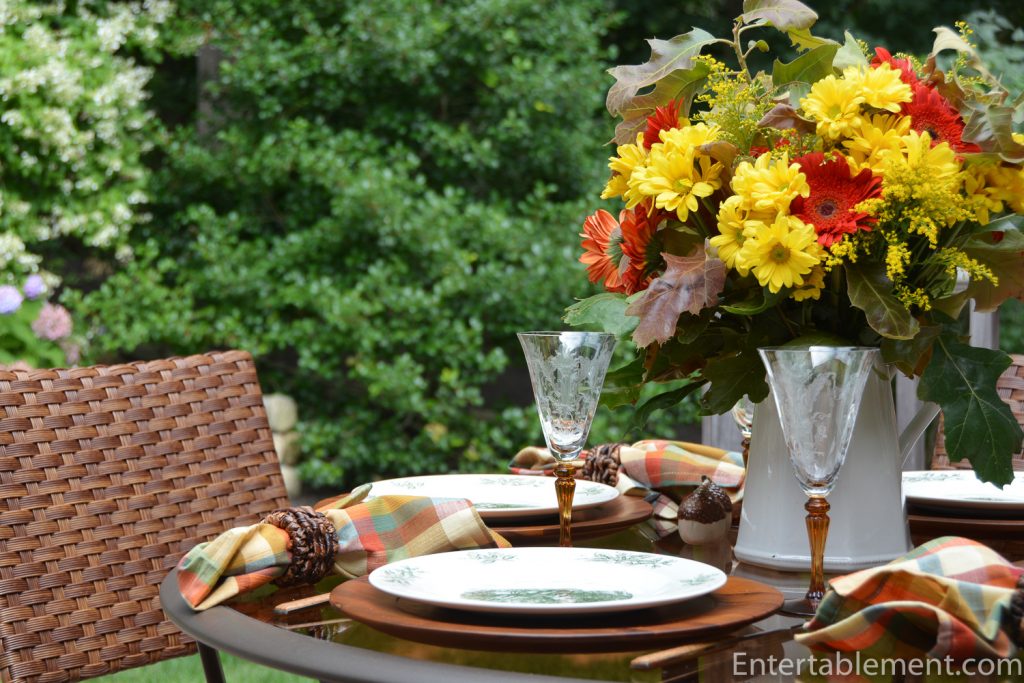 This table features the plates on their own, not as a backdrop to anything else. I’m happy to report that they serve that role very well, too, and I’ll be using them a lot in future, especially as I was able to track down two more in the series of eight. Yes!
I got the first five from Replacements. where they were beguilingly described as WW121.  Hmmm. Less than helpful. It’s a miracle I found them at all. Google searches for Wedgwood WW121 turned up nothing. Once I set this table, however, I paid more attention to the back stamps and googled Thomas Long Wedgwood. Bingo. Several more turned up, so now I have seven different ones, and a few repeats, as the ones I didn’t have were part of a lot being sold on e-Bay. Fine with me. They were very inexpensive :). Happy tap dance. “Zippity do da, zippity day, my oh my, what a wonderful day….”  I added Island Windmill and Charles Morgan, Last of the Great Whalers to the new ones and three duplicates came along for the ride. I’m just missing the Rhode Island Homestead now. 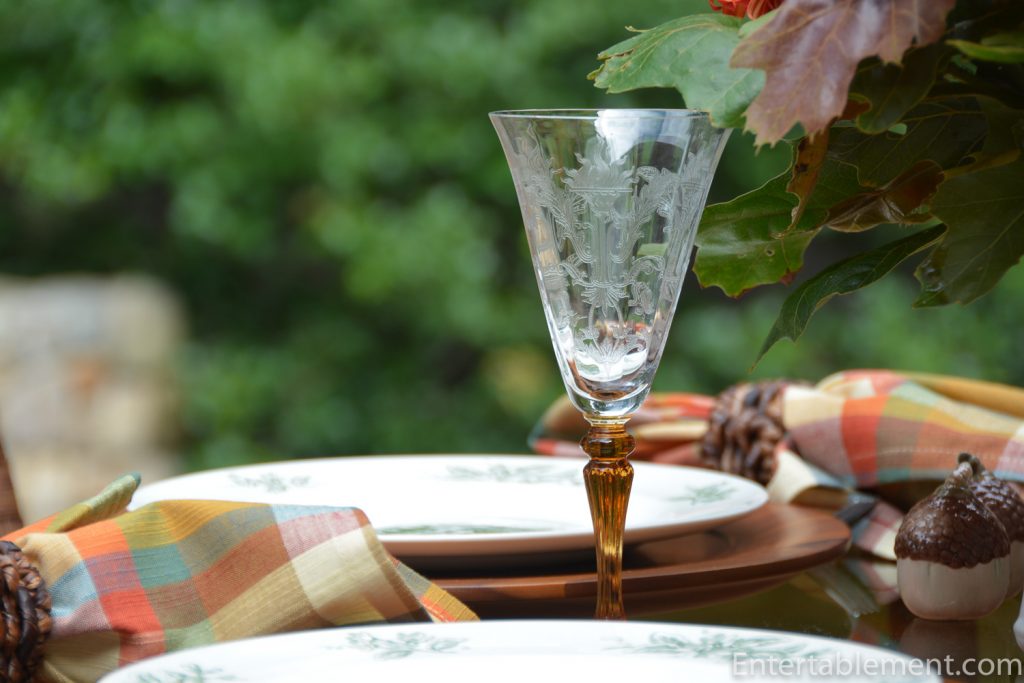 Amber stemmed Depression glass in the Julia pattern by Tiffin Franciscan picked up the rusty tones in the Farmhouse Plaid napkins by Pier 1. 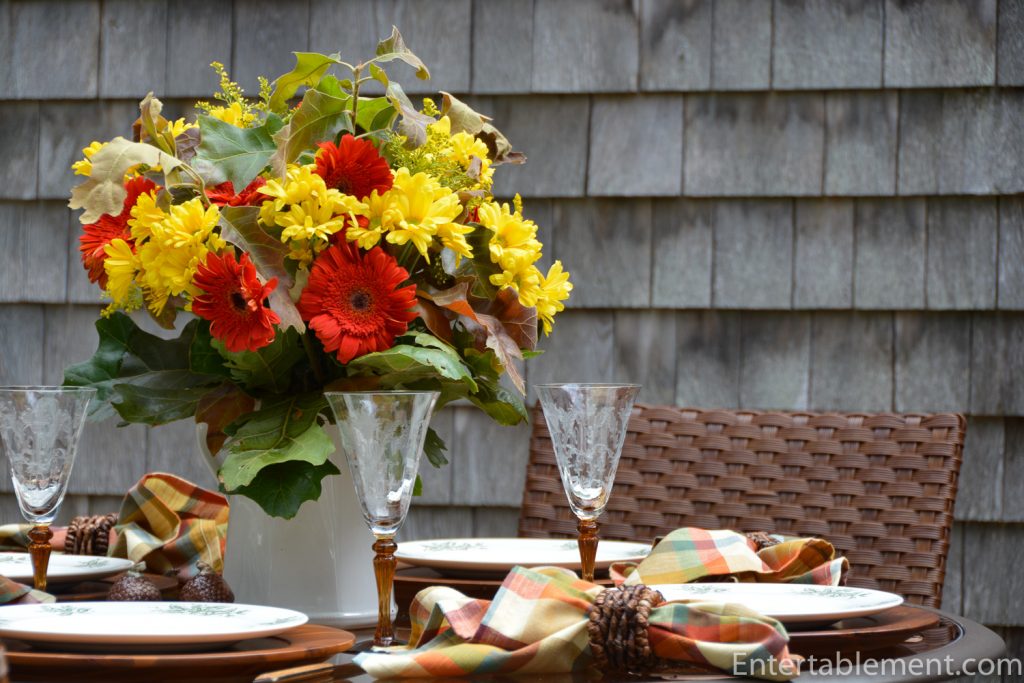 I pulled together a cheerful bouquet of chrysanthemums and gerber daisies from the ever-reliable Trader Joe’s, supplemented with oak leaves from the back yard and plonked them into a plain white jug. 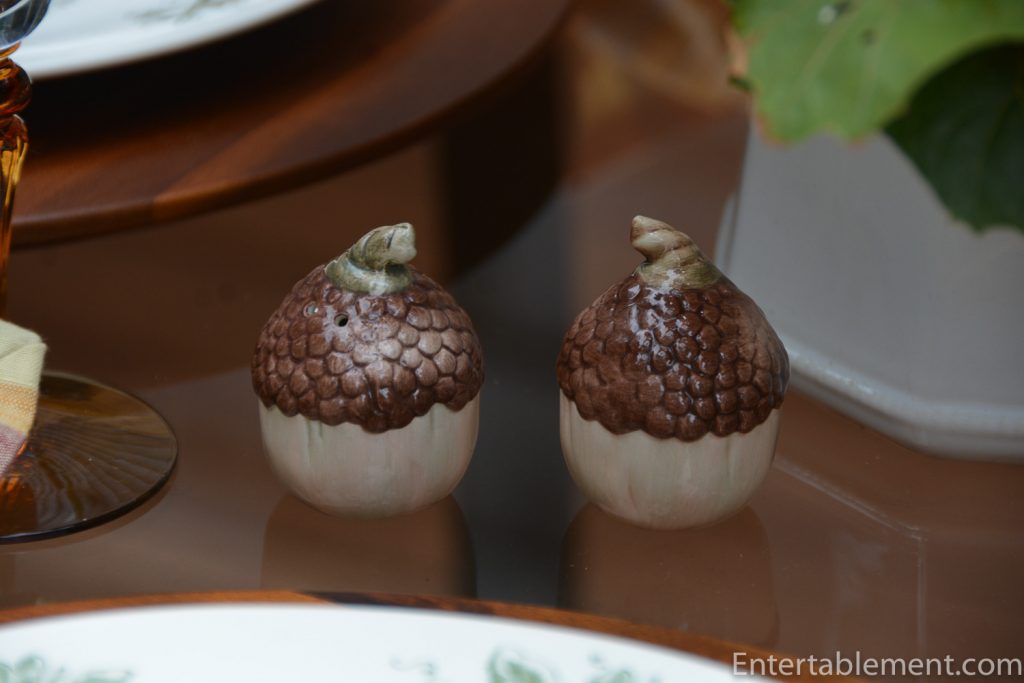 The little acorn salt & pepper shakers by Kaldun & Bogle were an eBay find. They came on a little leaf tray, but I used them on their own for this setting. 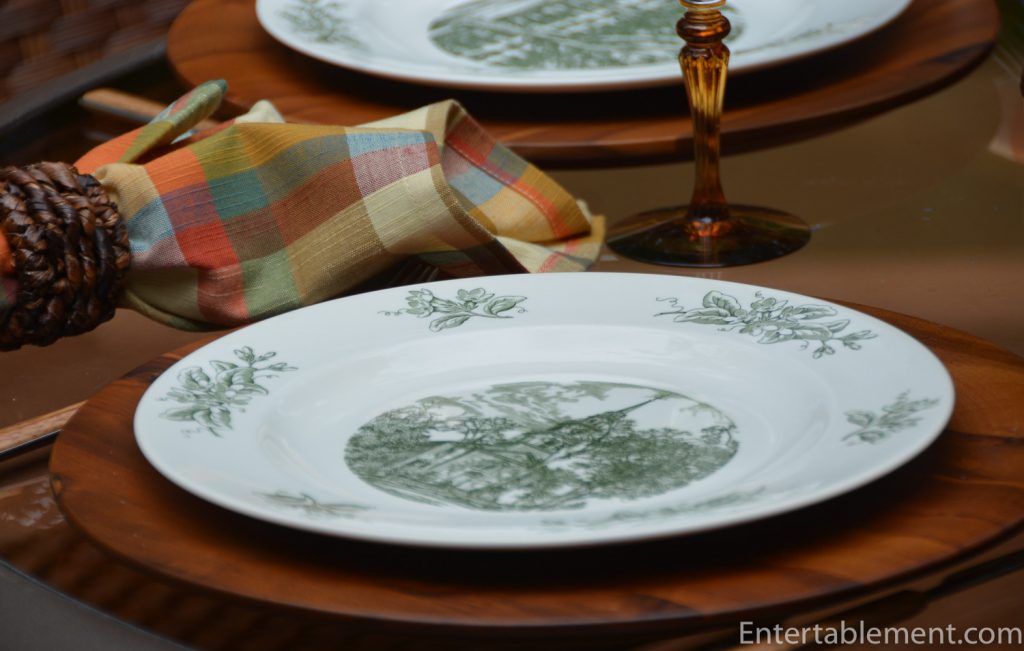 What do you think?  Good score?
I hope you’ve enjoyed the tour of the Boston Area, brought to you by the Thomas Long Company!
I’m sharing this post with Between Naps on the Porch.
Next
Previous