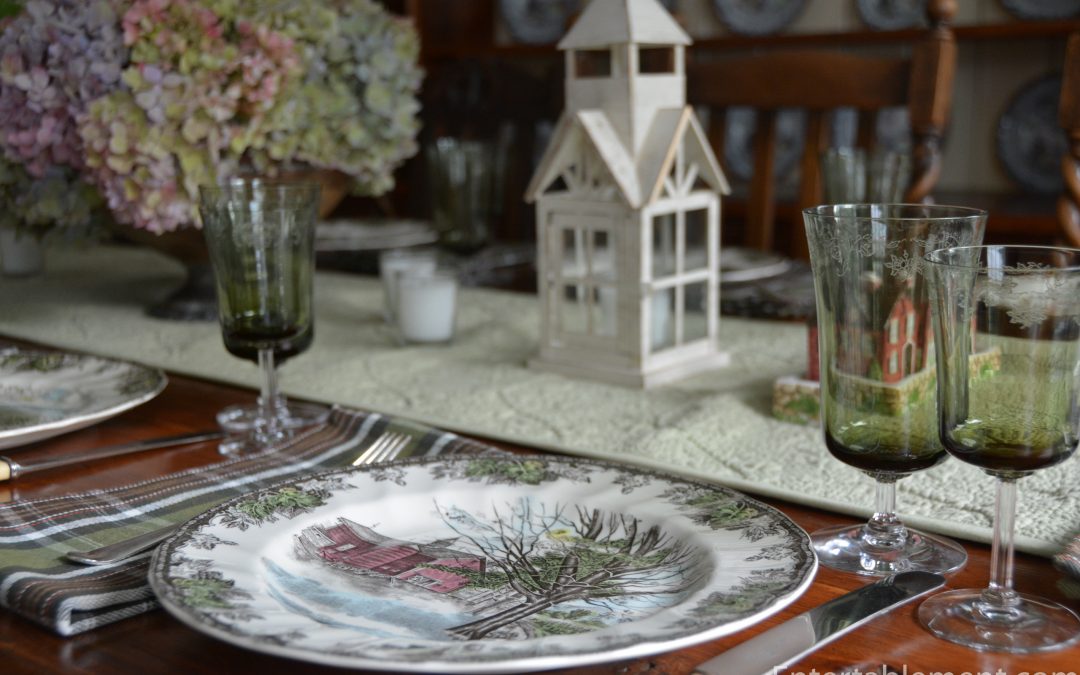 My enthusiasm for brown transferware is fairly recent, but I have to admit it’s growing on me. Perfect for fall, of course, it provides a wonderful cohesive platform for all manner of luscious deep rusty, green and yellow flowers. 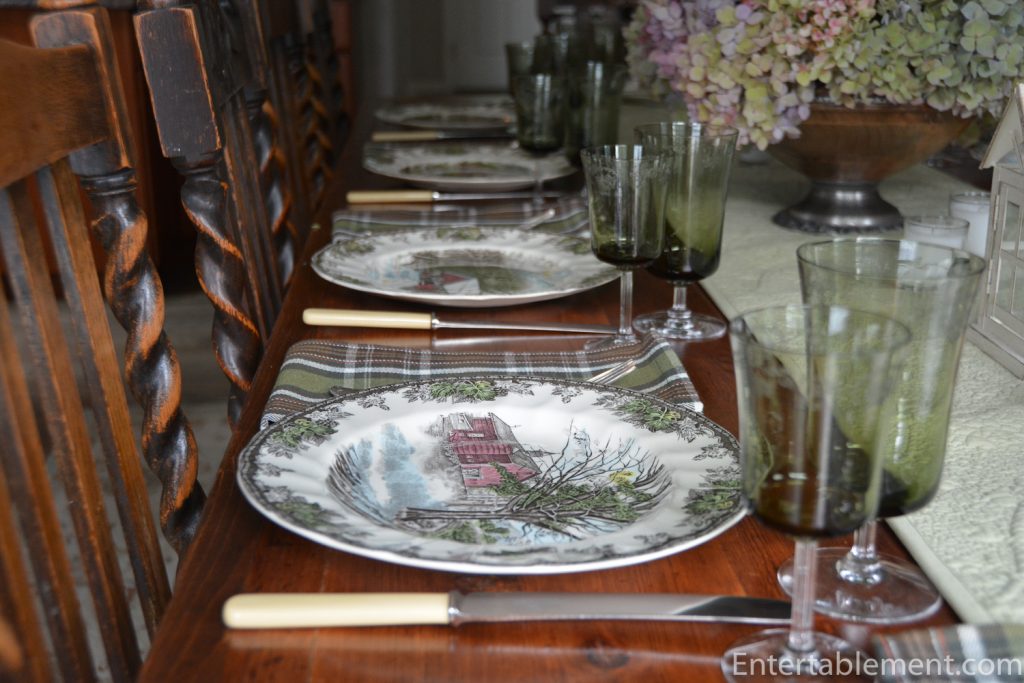 In the case of Friendly Village, though, the standout coordinating colour is surprisingly, pink! 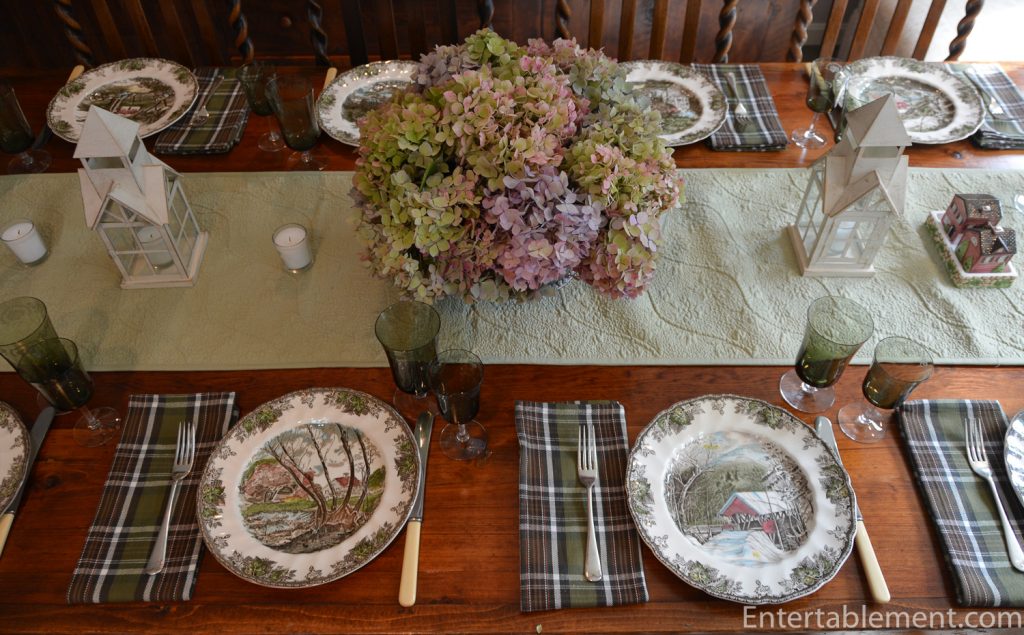 Johnson Brothers began producing Friendly Village in 1953 and continued doing so in  England for 50 years. During that time they also launched a couple of specialty sets, including square plates with a Christmas theme and a 50th Anniversary set of six canapé plates with some serving pieces in 2003. Production then switched to China in 2004, and appeared under another name, “England 1883” . It carried on until 2017.  It’s a pattern with a dizzying number of pieces,  from plates of all sizes to tureens, glasses and coasters. Because there are so many pieces and the production was over such an extended period, you need to be careful what you’re buying. I believe it’s generally felt that the English product is of higher quality than the later pieces. 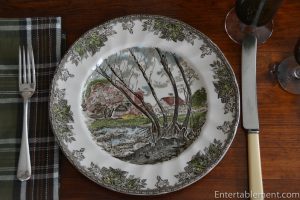 Willow by the Brook 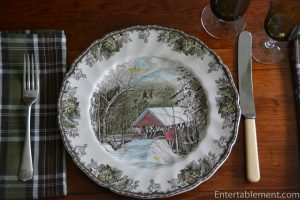 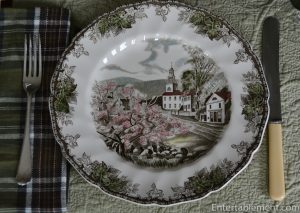 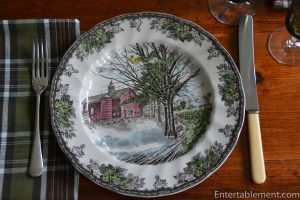 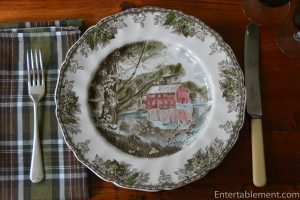 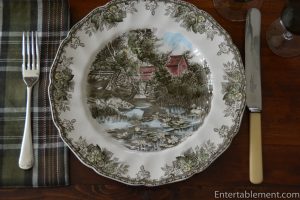 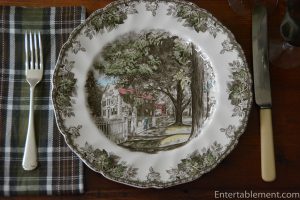 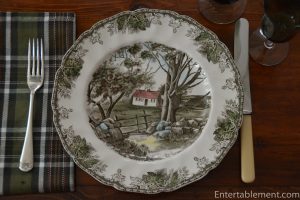 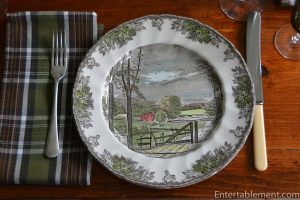 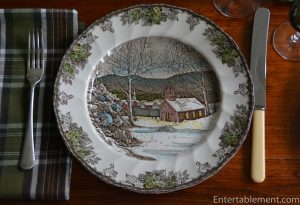 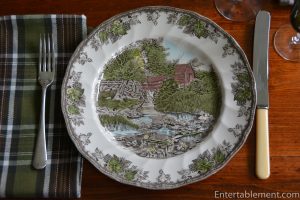 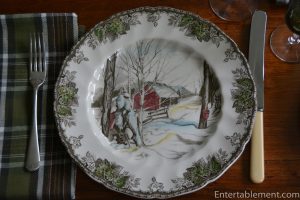 There are twelve dinner plate scenes in total, plus The Turkey, which I don’t have. He’s a significant premium price and I don’t need a baker’s dozen. Thirteen for dinner is bad luck… 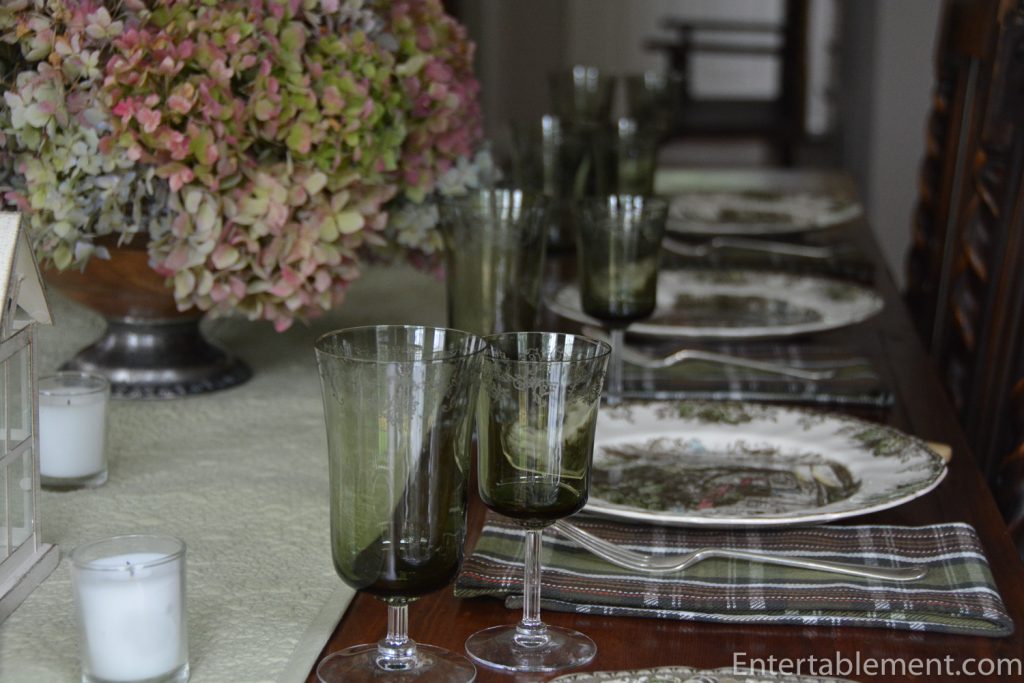 The green in the plates is a soft, mossy shade. It prompted me to go looking for glasses and napkins in similar tones. 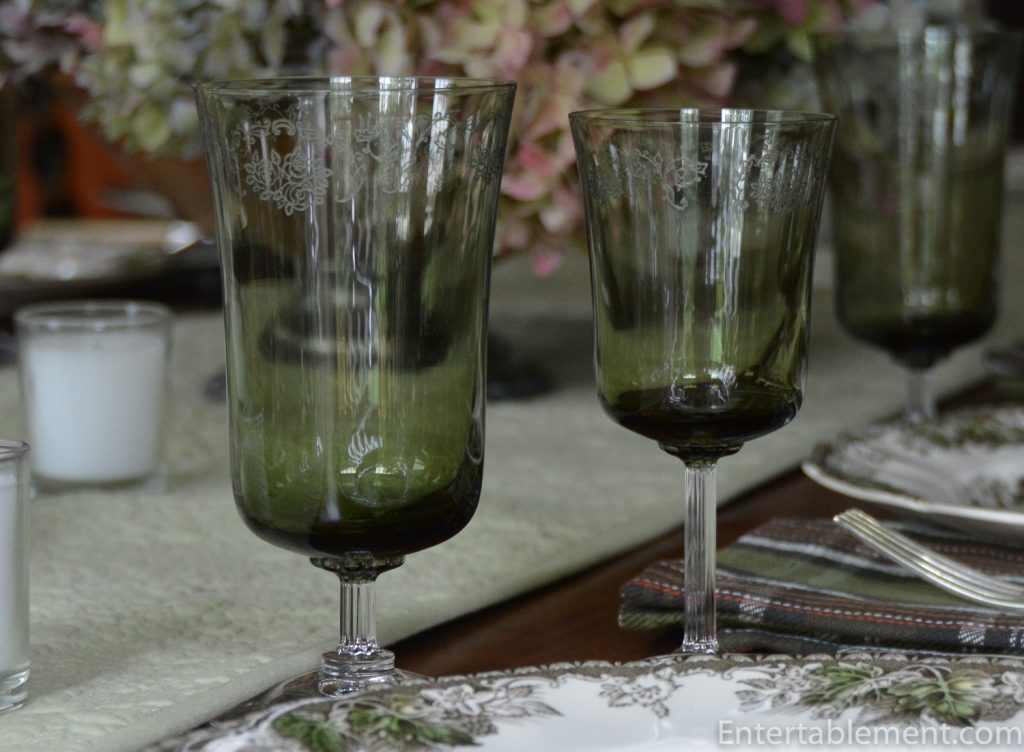 The glasses are Cameo Green by Fostoria. Although they look like Depression glass, they’re actually from the 1970s. 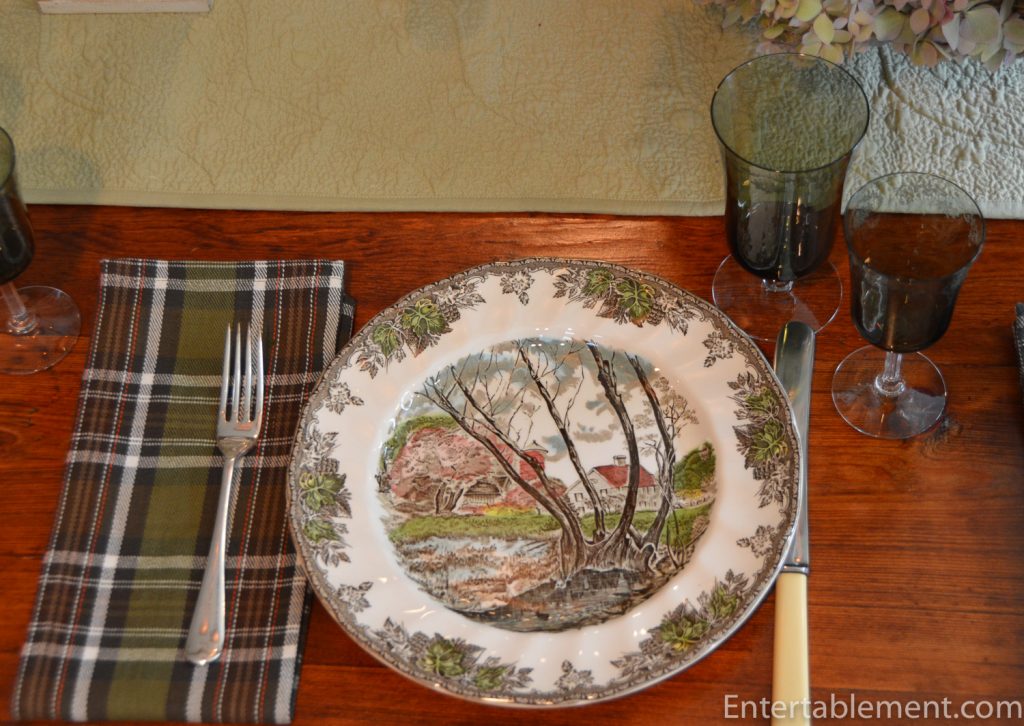 The Twill Plaid Forest Green napkin from Pier 1 coordinated very well.  The flatware is part of a vintage bakelite handled set I got many years ago from Country Dining Room Antiques (now defunct). 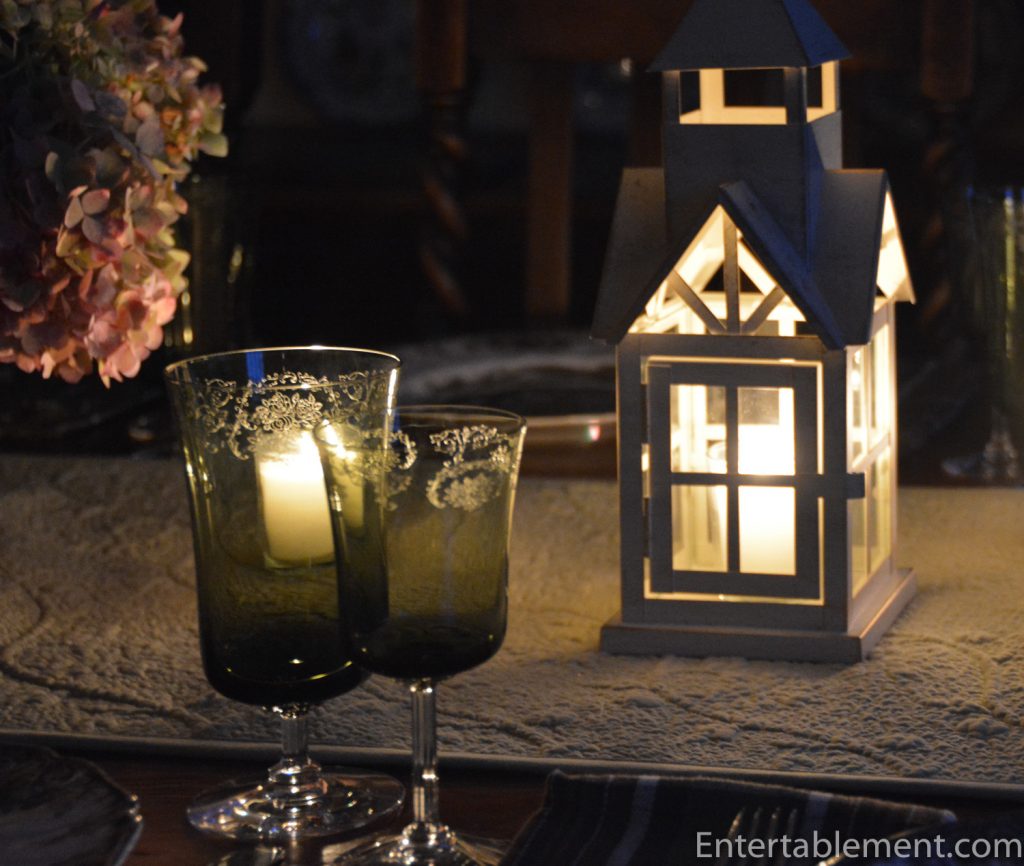 The Metal House Lanterns from Pier 1 provided a nice warm glow to the table. They’re no longer available in white, but the blue is still to be had, and is on clearance. 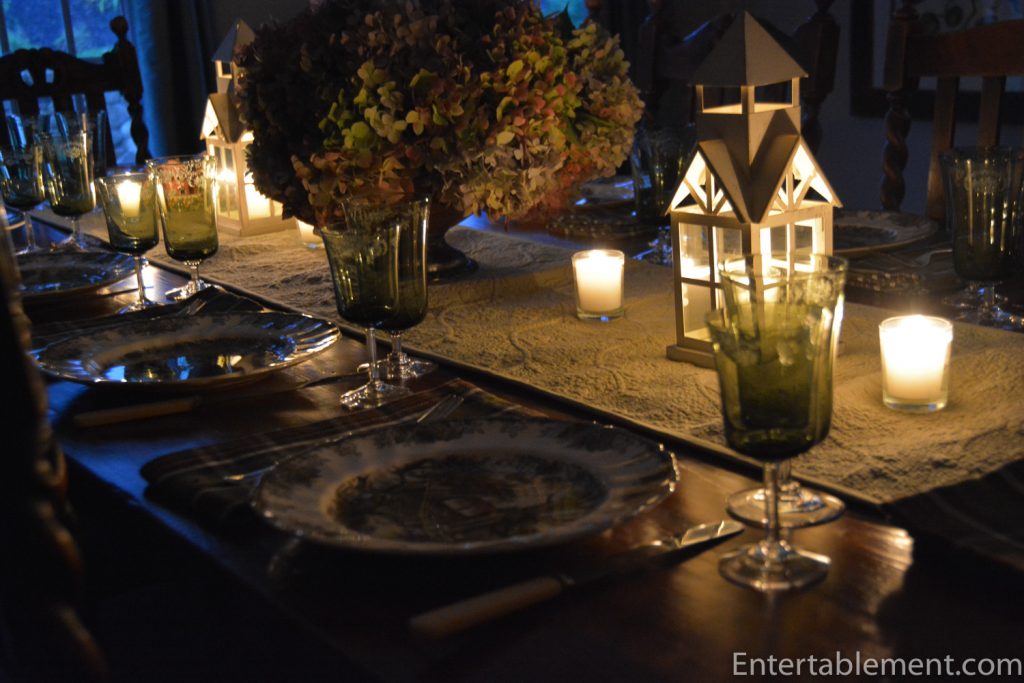 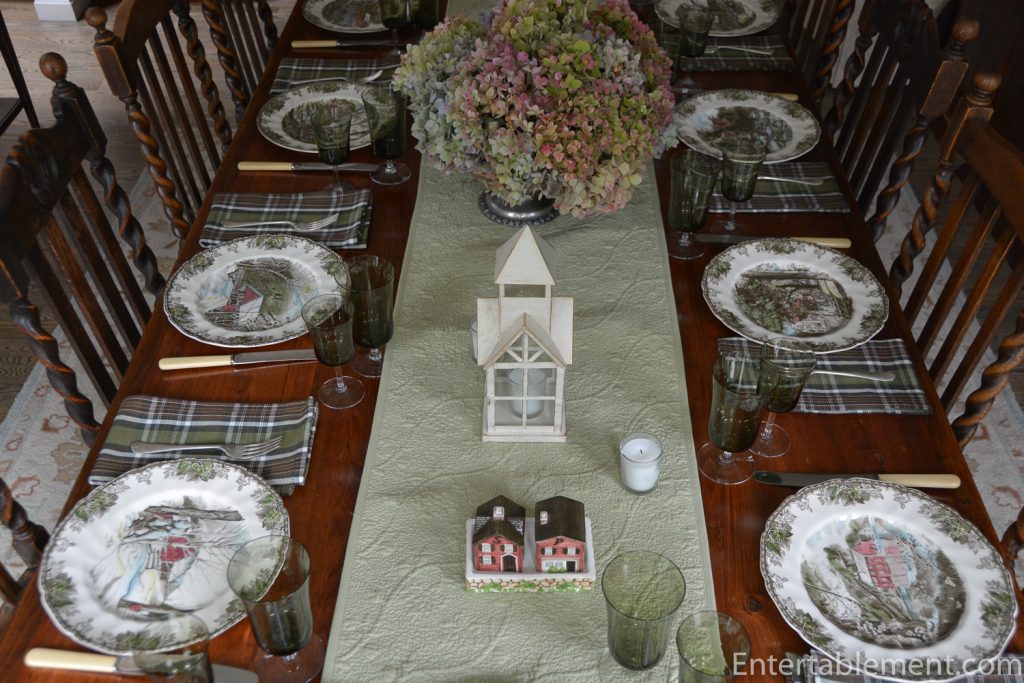 The runner is Vine Floral Boutis from Williams Sonoma, in sage green. It comes in several colours, including a yummy pumpkin, which would be perfect for fall tables. 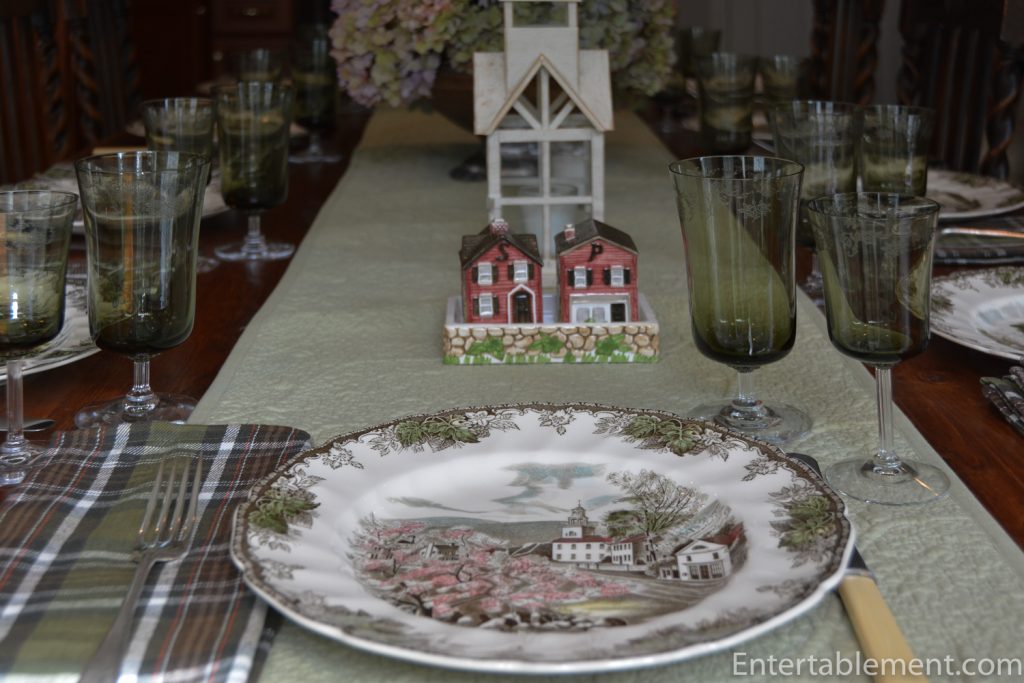 Of course, I couldn’t resist the salt and pepper shakers from the Friendly Village set. It was an eBay find. 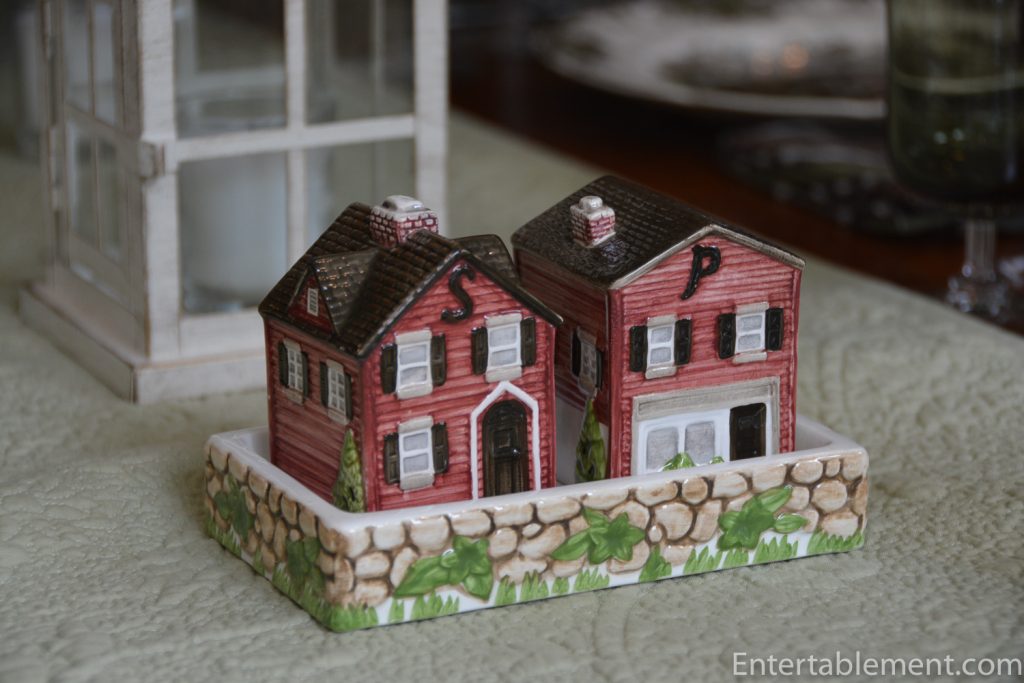 They come in their own little stone walled container. 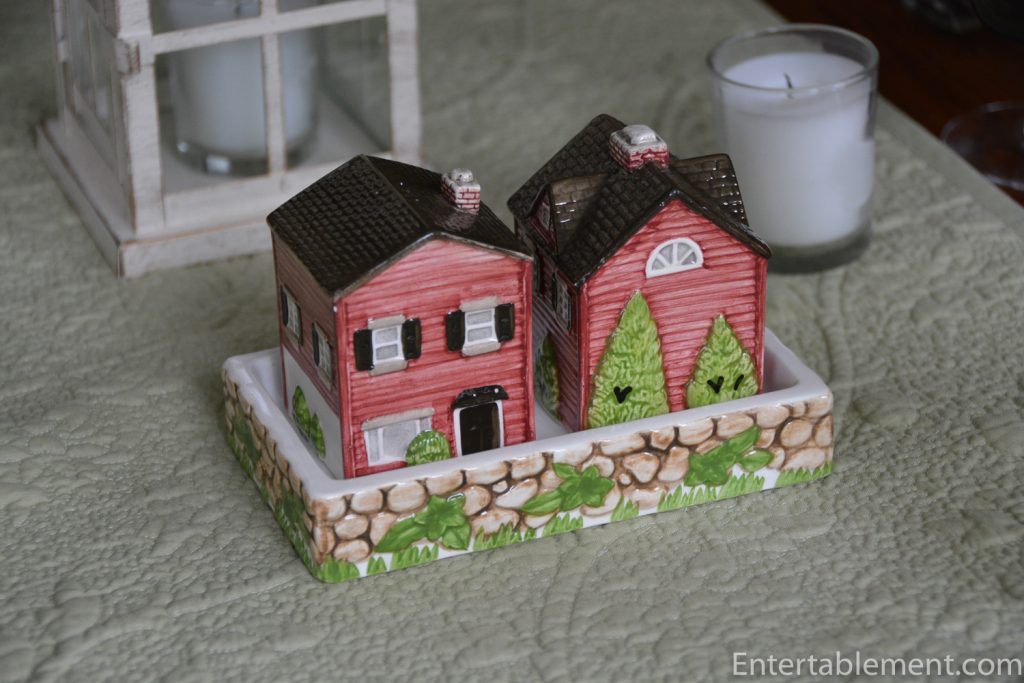 The back of the salt shaker has trees growing up it, and the pepper shaker has a back door. Adorable. 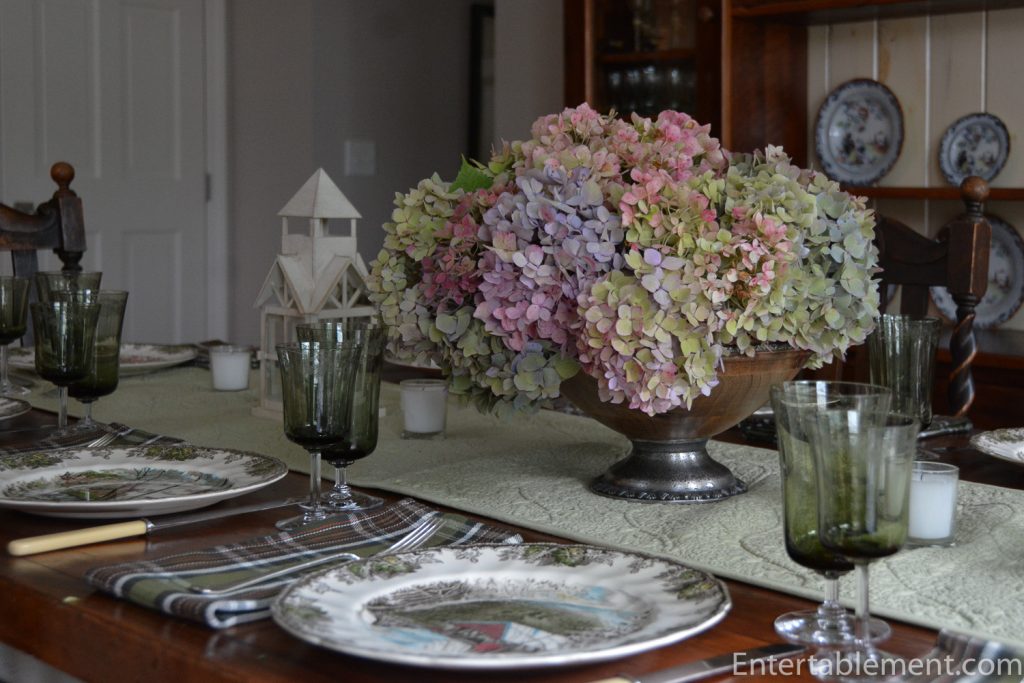 Hydrangea from the garden had reached the papery dry phase perfect for preserving. I simply gathered the stems together to form a bouquet, secured them with an elastic band and clipped the stems to the correct length. Into the footed wooden bowl (from Pier 1, discontinued) they went. I have to give them an occasional shove back into position, as Moxie is very fond of nibbling on them when she gets a chance. Cats eat the weirdest things… 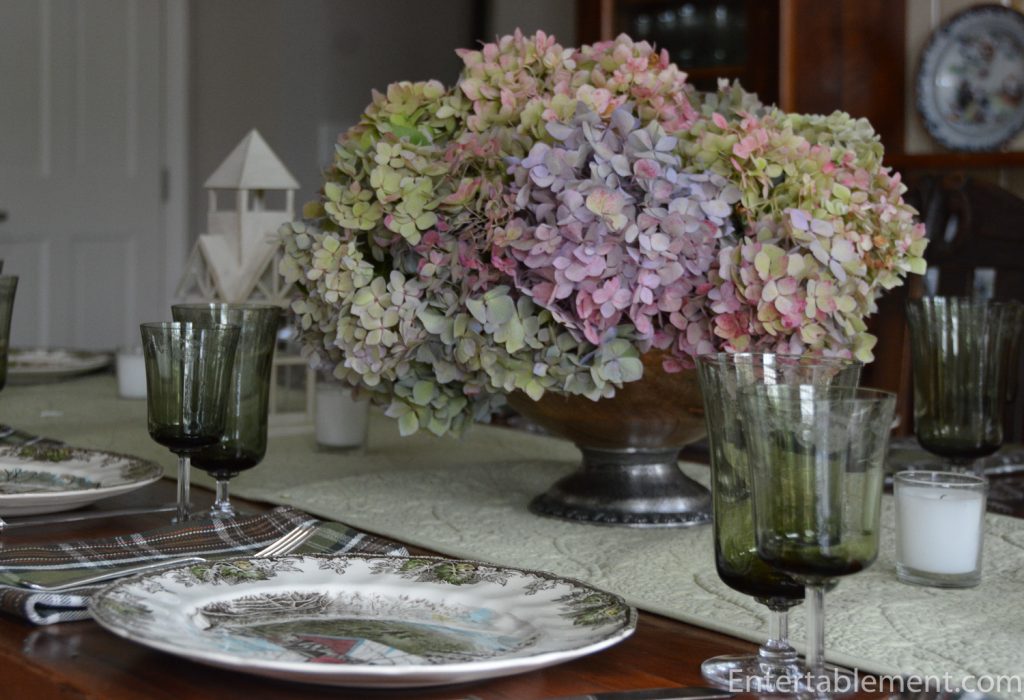 The soft combination of pinks, greens and purples keeps its colour all winter (barring too many incursions from Moxie). 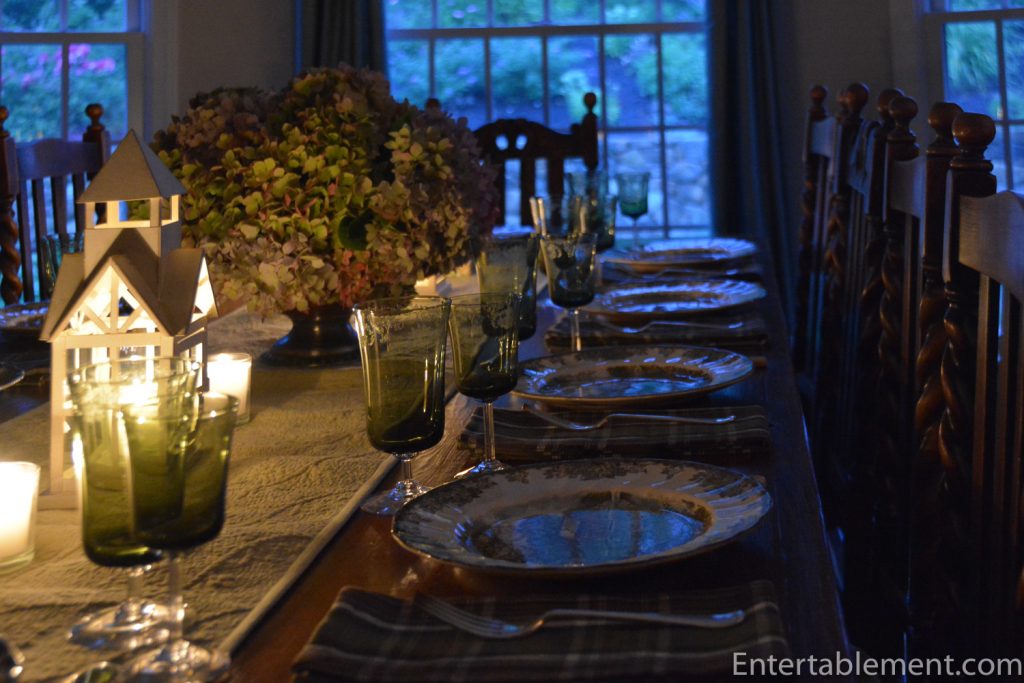 The “blue hour” had arrived so I snapped a couple of pictures. 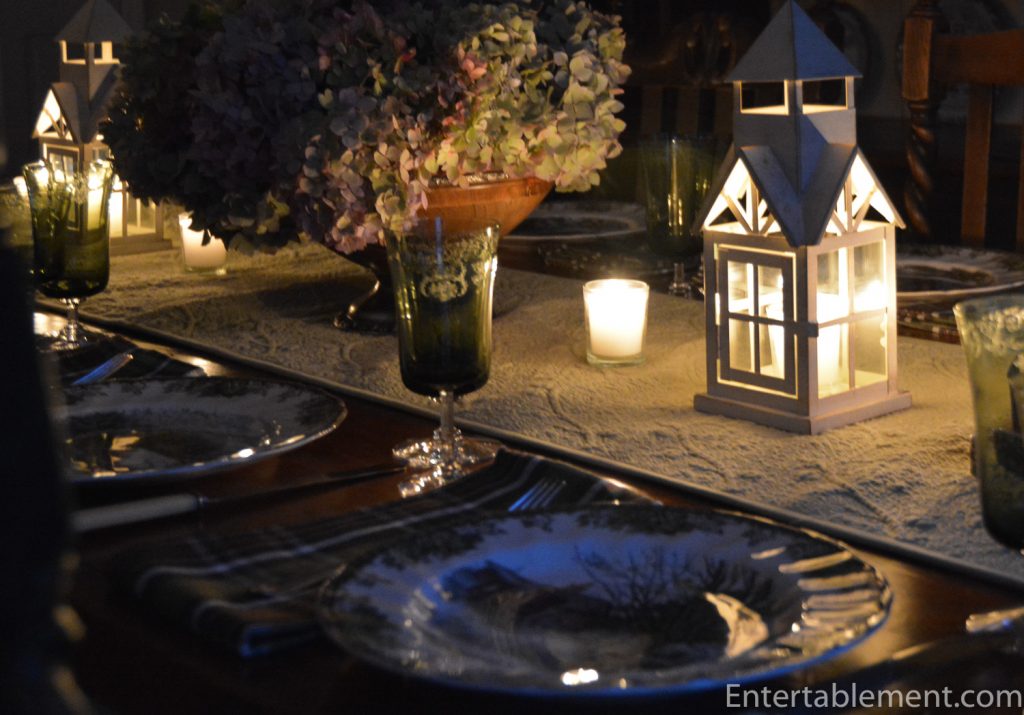 It’s one of the consolations we get for shortened days and cold temperatures: candlelight dinners arrive much earlier and feel very warm and welcome.

Hallowe’en tonight, folks! I hope you have your pumpkins ready and the candies at hand, ready to shell out. I’ve been nibbling (“Nibbling??? Hoovering, more like” mutters Teddy) on Snickers, KitKat and Reese’s Peanut Butter cups and hope we have enough left for the kids…

I’m in full Christmas table contemplation mode, and will be glad to see the start of November. My son, Adam, insists that Christmas decorations appearing before Remembrance Day is bad form, so I shall hold off a bit longer on the house itself. But I can still set and snap tables in the meantime. Because we celebrate Canadian Thanksgiving in early October, we have a free runway from the Adam-imposed-start date of November 11 through to Christmas Day. Let the tinsel begin!