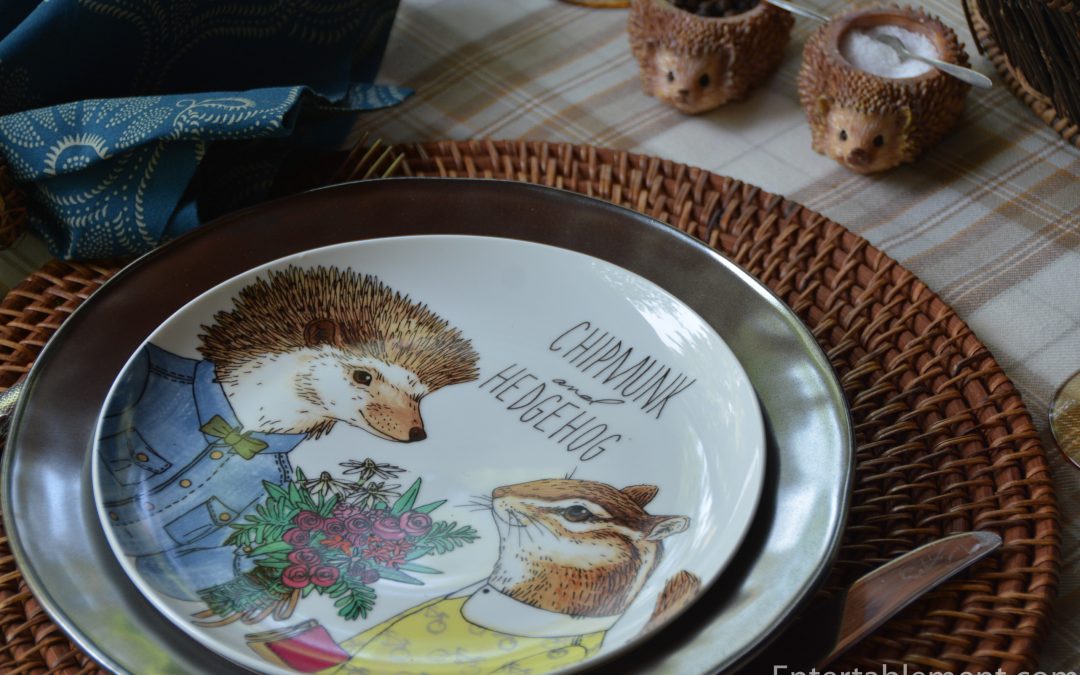 Part of the Dapper Animals series by West Elm, these four “couples” plates stole my heart. Especially the Hedgehog, with his Chipmunk wife. 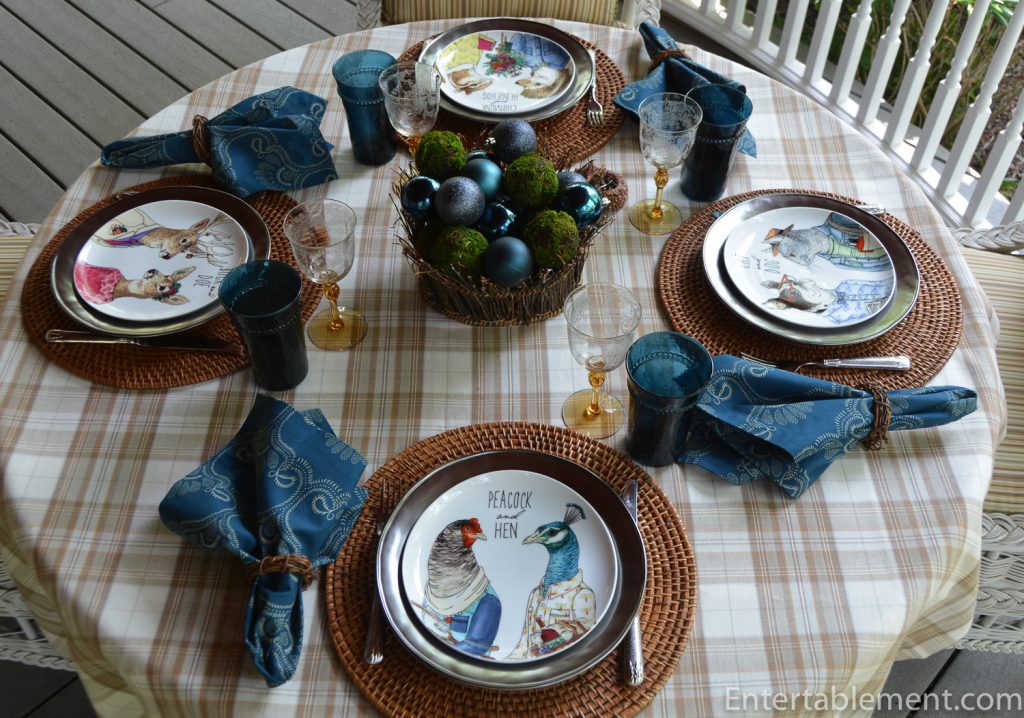 I was late to the party on these plates, and discovered them on Pinterest long after they’d been issued and supplies in the stores and online had dwindled. I see from checking the website today, though, that they still have a couple available and that there are now a set of three teatowels. 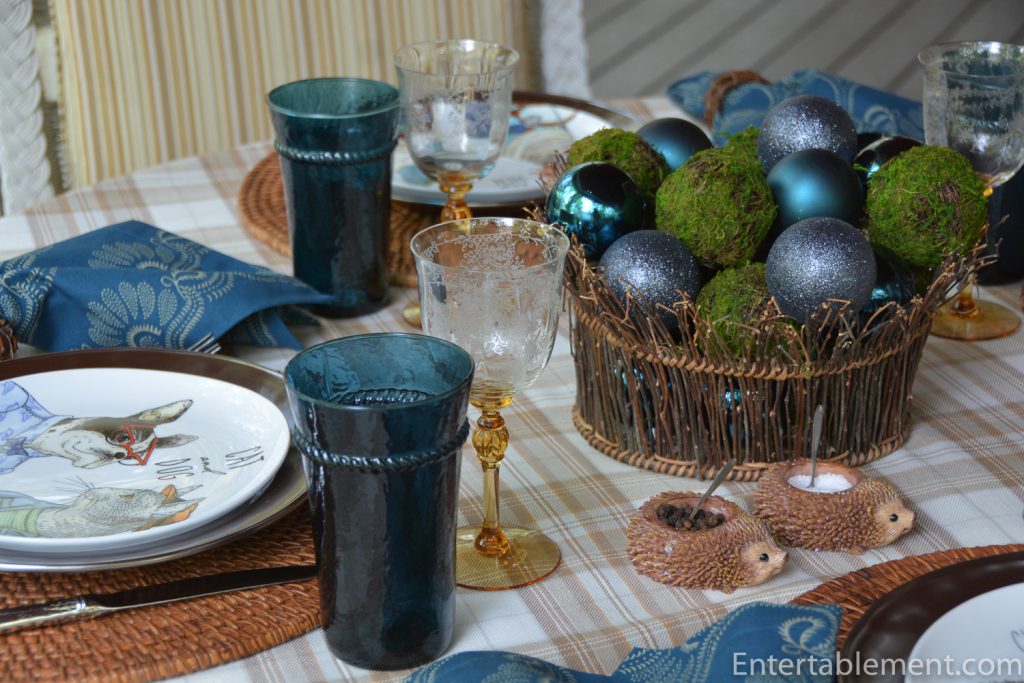 I was able to find quite a few of them online in the US, and oddly, in a store in London, England. It wasn’t the first time we’d lugged home tableware from England, and probably won’t be the last!  Into the suitcases half a dozen plates went, and we endured the usual frosty looks from the check-in baggage people at the airport as they slapped orange “HEAVY” tags on our bags.

The detail on each plate tells a bit of a story about the couple, and I started to speculate about what might be going on. 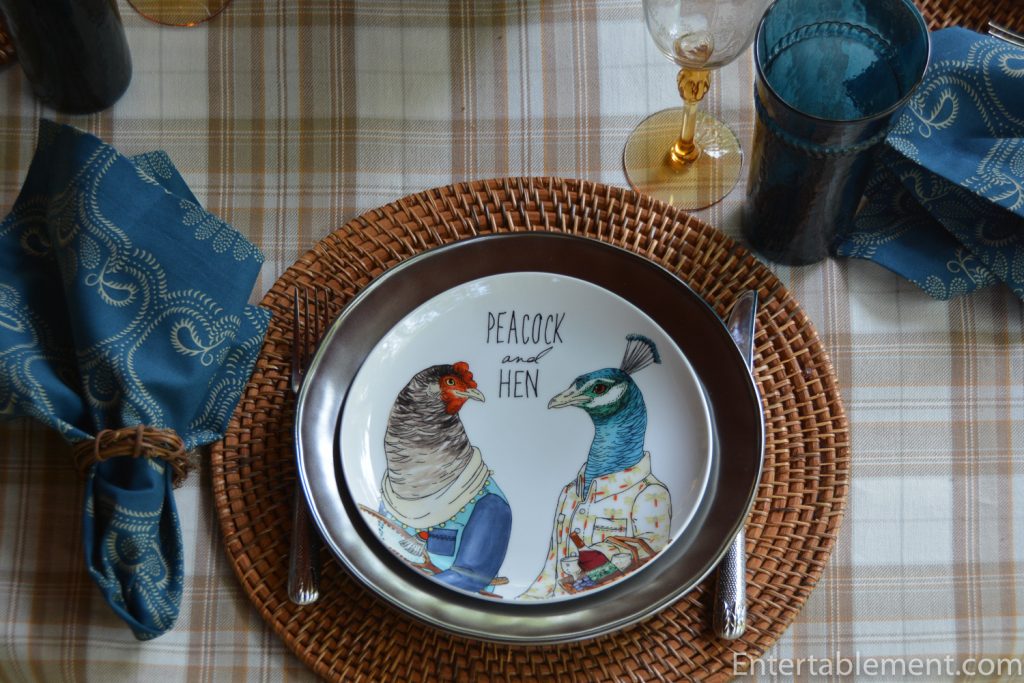 The Peacock is carrying what looks like a tennis racquet and the Hen has a bottle of wine and a wineglass in her bag. Are they off to a picnic? 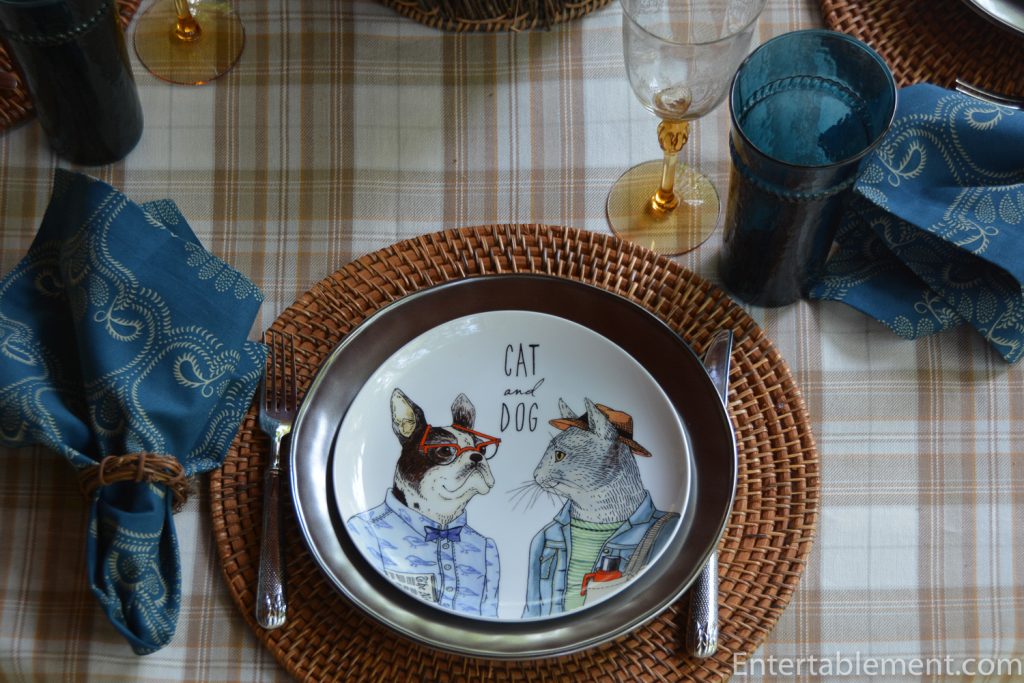 The Cat with her thermos and the bow-tied Dog with his prominent red spectacles and newspaper. He wants to read and she is setting out on a walk? 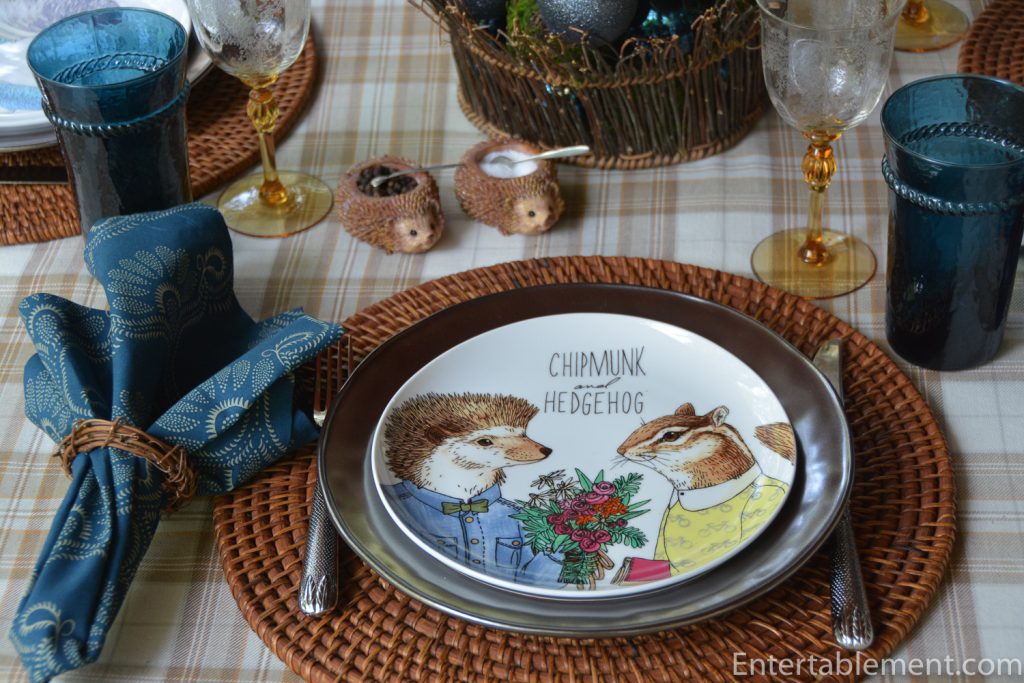 The smitten Hedgehog is preferring a bouquet of red roses to the Chipmunk. Their anniversary, or is he apologizing for something? 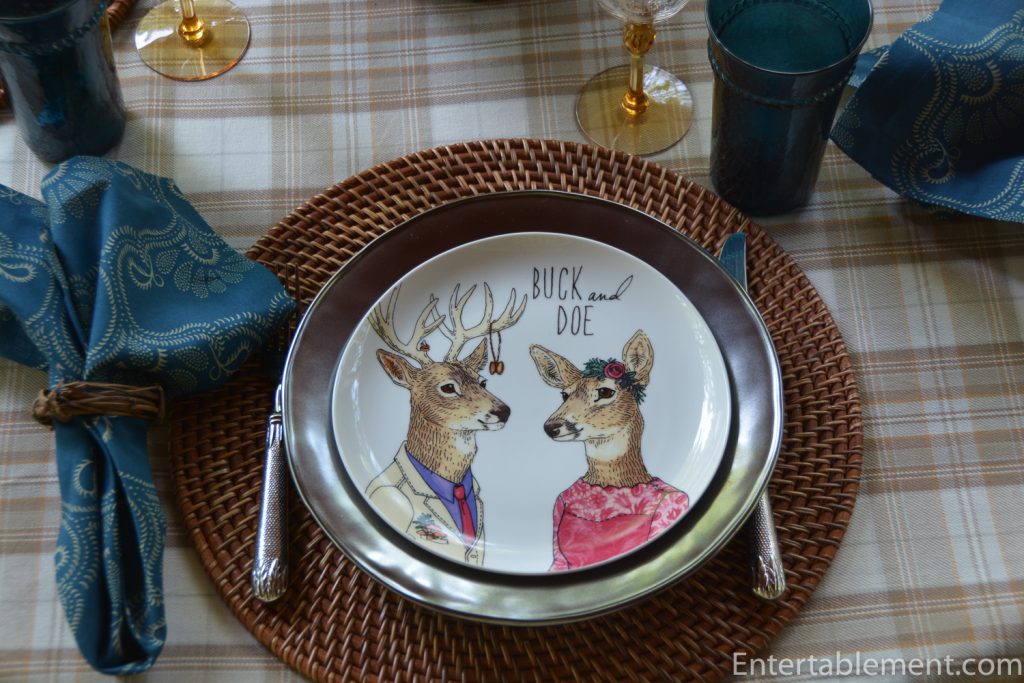 The Buck and Doe are a bit of a mystery. He has two rings and a necklace on one of his antlers, and is wearing a boutonniere. She is wearing a wreath in her hair. Are they standing up for another couple at a wedding? I love plates that tell a story, don’t you? 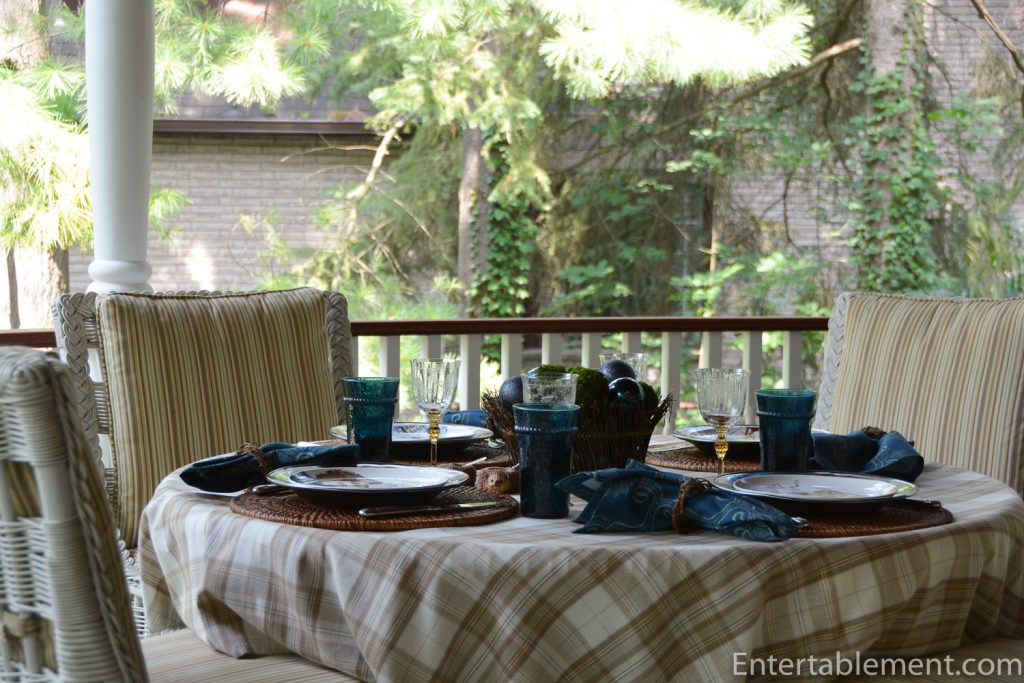 I shot these pictures a few weeks ago, when it was still warm enough to be setting up outside. While they’re not strictly holiday plates, they have that aura about them – probably because of the buck and doe. 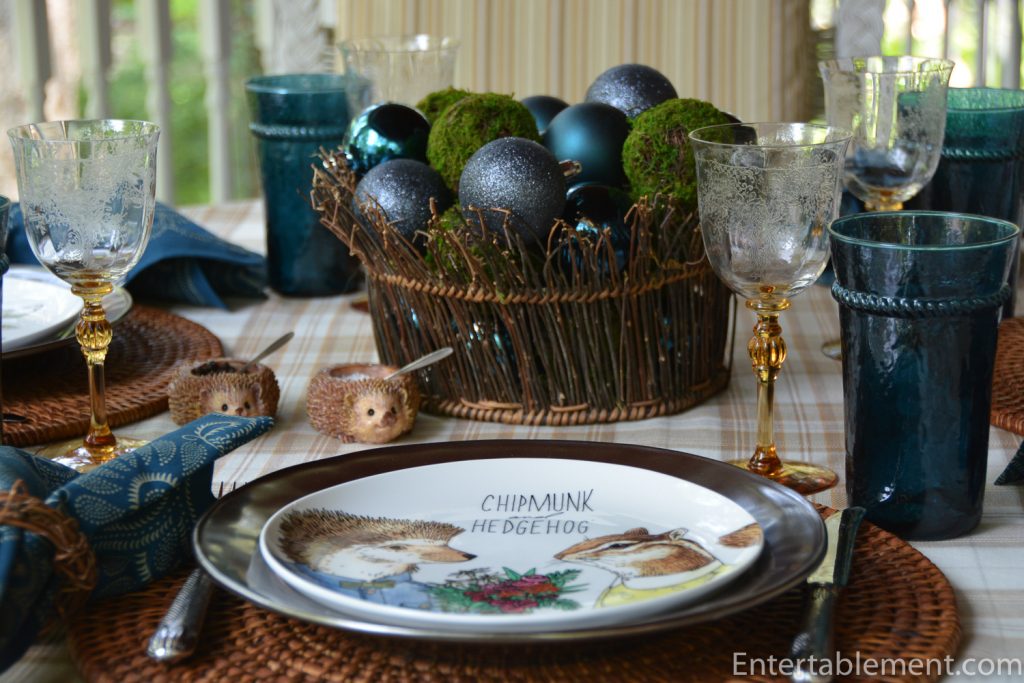 So I took liberties and used some Christmas baubles and moss-covered grapevine balls in a twig basket for the centrepiece. 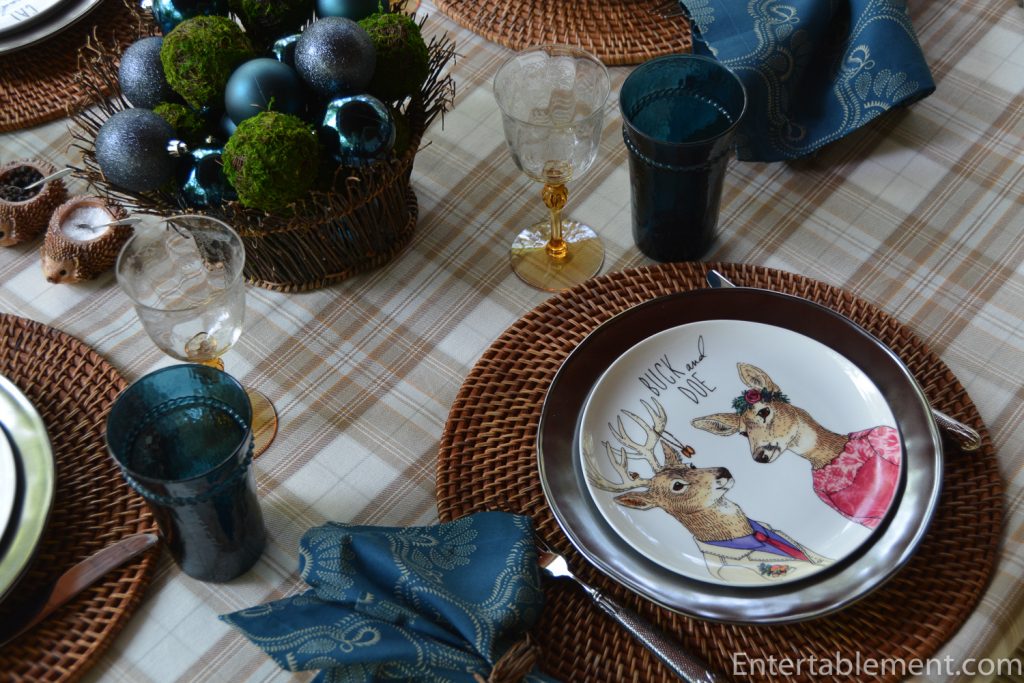 The tablecloth is a HomeSense/HomeGoods find. The placemats are from Pier 1 many years ago, but are still available. 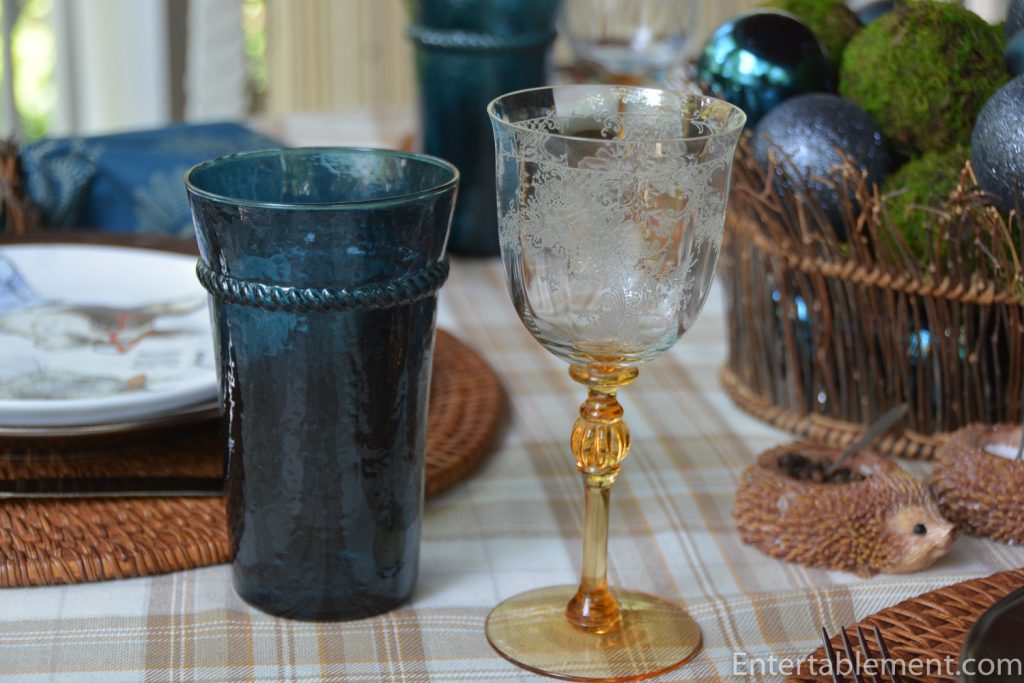 The Corda tumblers are also from Pier 1. That denim blue is discontinued, but the come out with different colours every season in the same glass. The Morgantown amber-stemmed Depression glass is from Replacements.com. 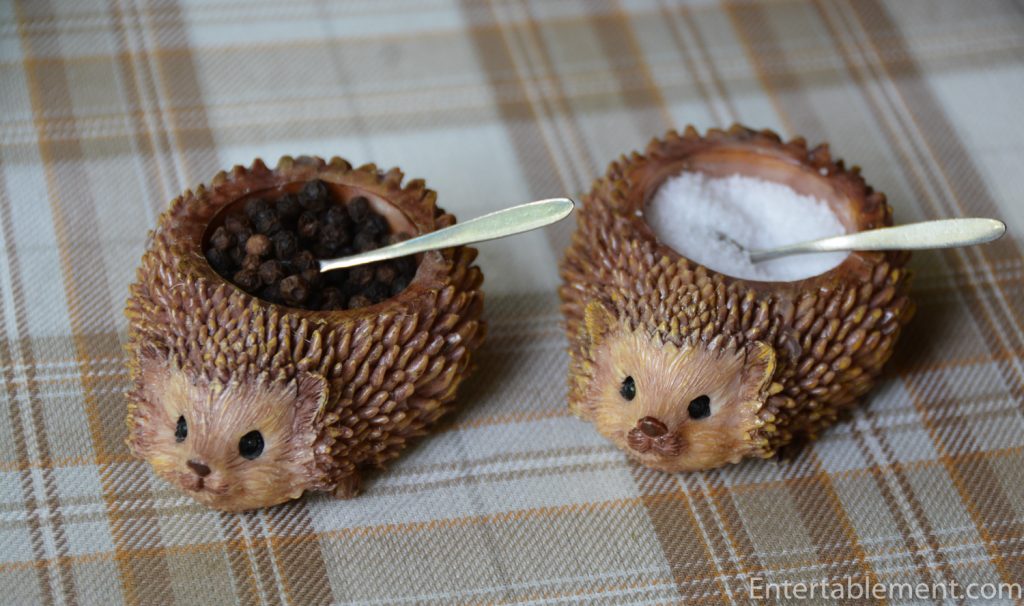 These little guys are actually tea lights, that have been pressed into service as open salts. I’ve had them for eons and have no idea where they came from. Our daughter, Lauren, used to have a pet African Pygmy Hedgehog named Ralph, so we had many hedgehog themed items for a time. We still have a lot of hedgehog stuffies for the Golden Retrievers, all named “Norman”  prefixed by their size. “Medium Norman” lives in the Cape. I think guests do a bit of a double-take wondering if Norman does duty as a tarot card reader or seance conductor. 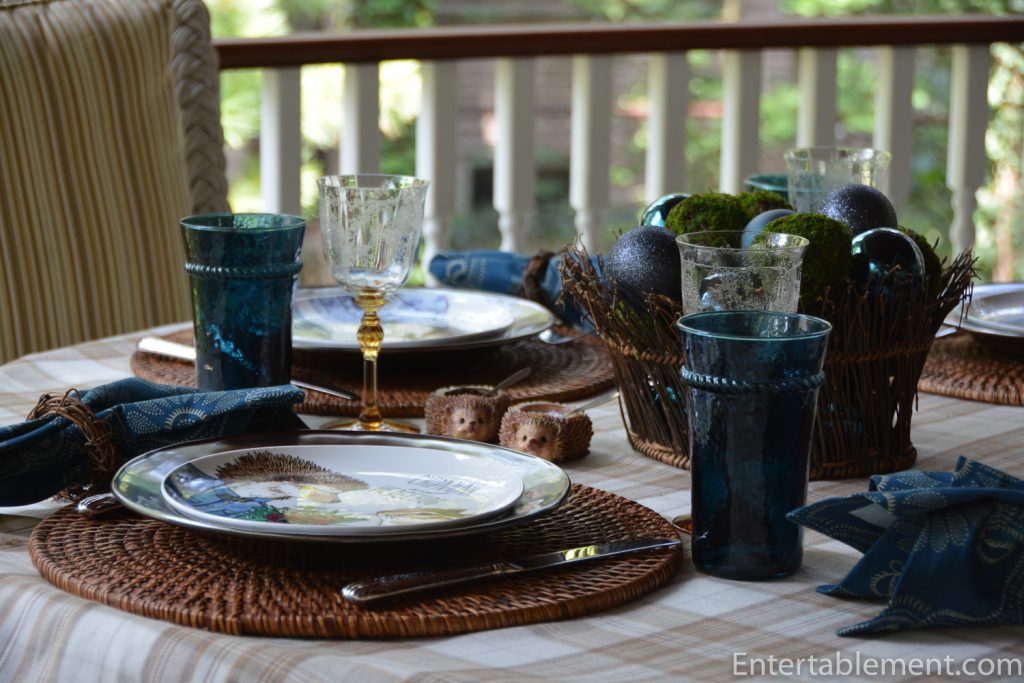 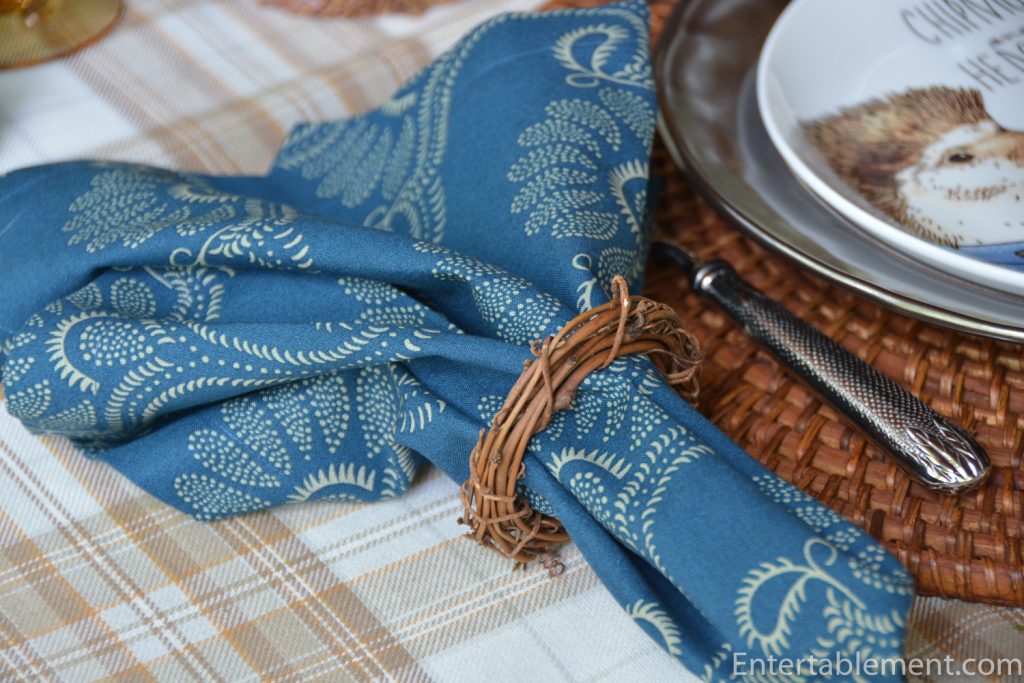 The napkins are from Williams Sonoma, several seasons ago. The “Victorian Blue” seemed to be the prominent colour in the plates, and coordinated nicely with the Corda glasses and baubles.  The grapevine napkin rings are from Amazon.com. 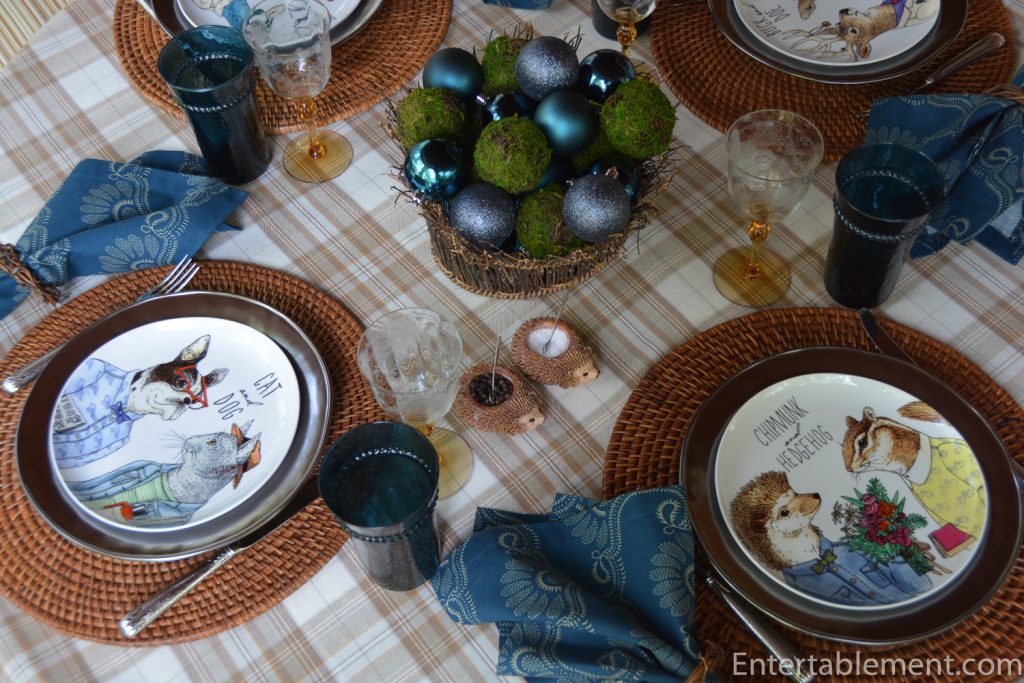 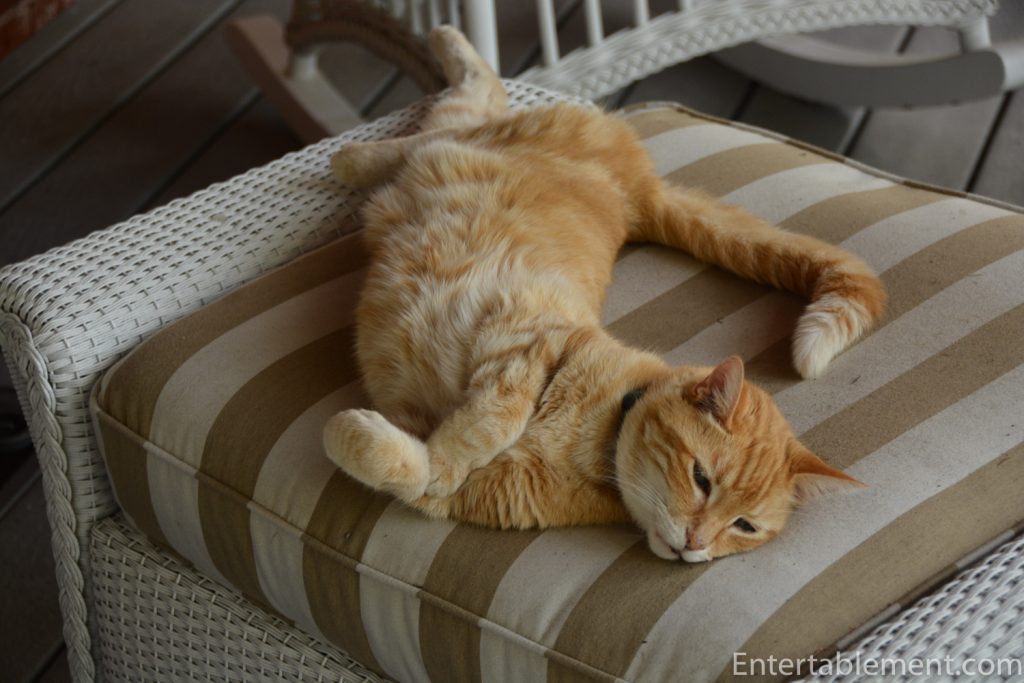 Tigger, exhausted from his duties as assistant table-setter, recovers with a nap on the ottoman. 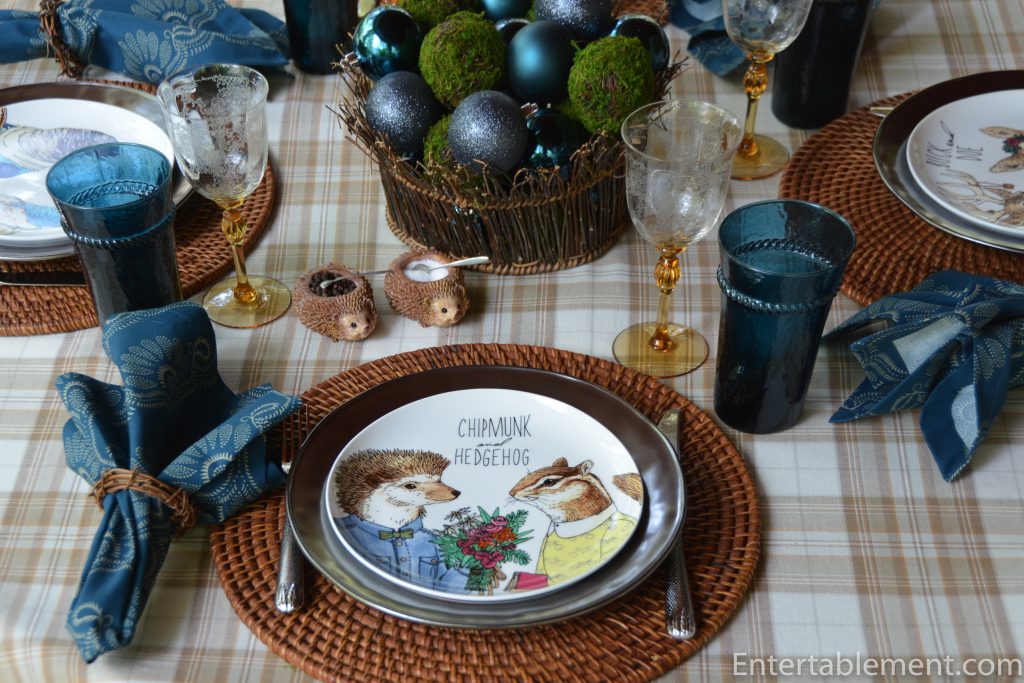 I’m in the throes of changing the house over for the Christmas season. The Christmas china has been unearthed and placed in the cupboards in the kitchen. We’re going to do the outside lights this weekend, before the weather turns really nasty. It’s coming! Time to get the advent calendars filled and the wreath on the door.