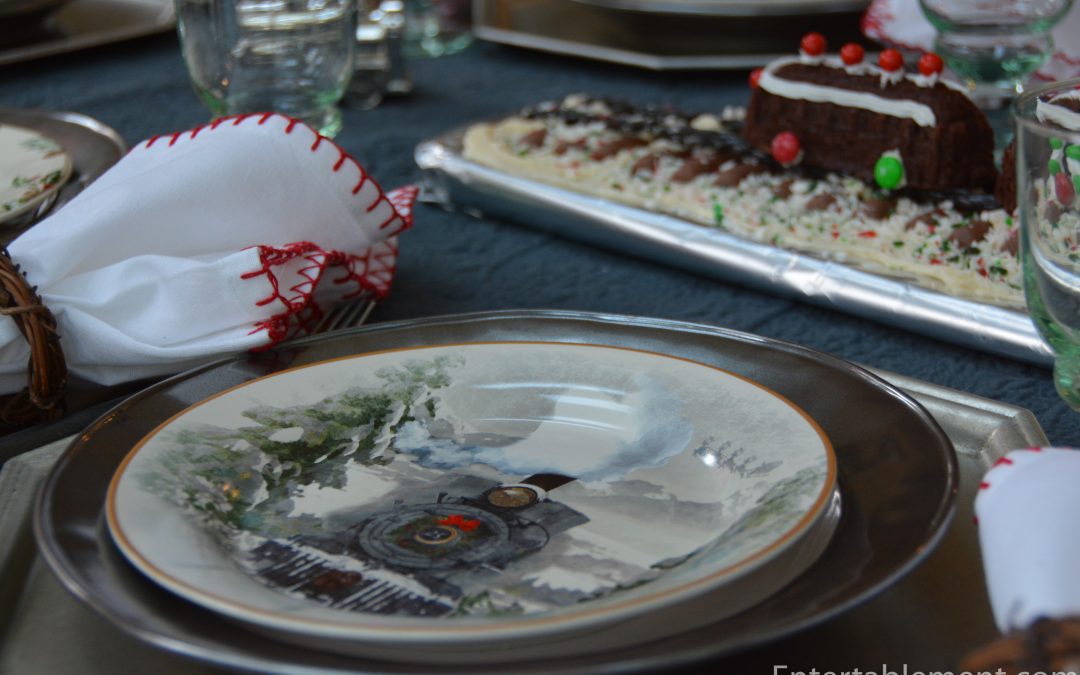 Or trains and trees and Christmastime. They all go together in one rush of anticipation. 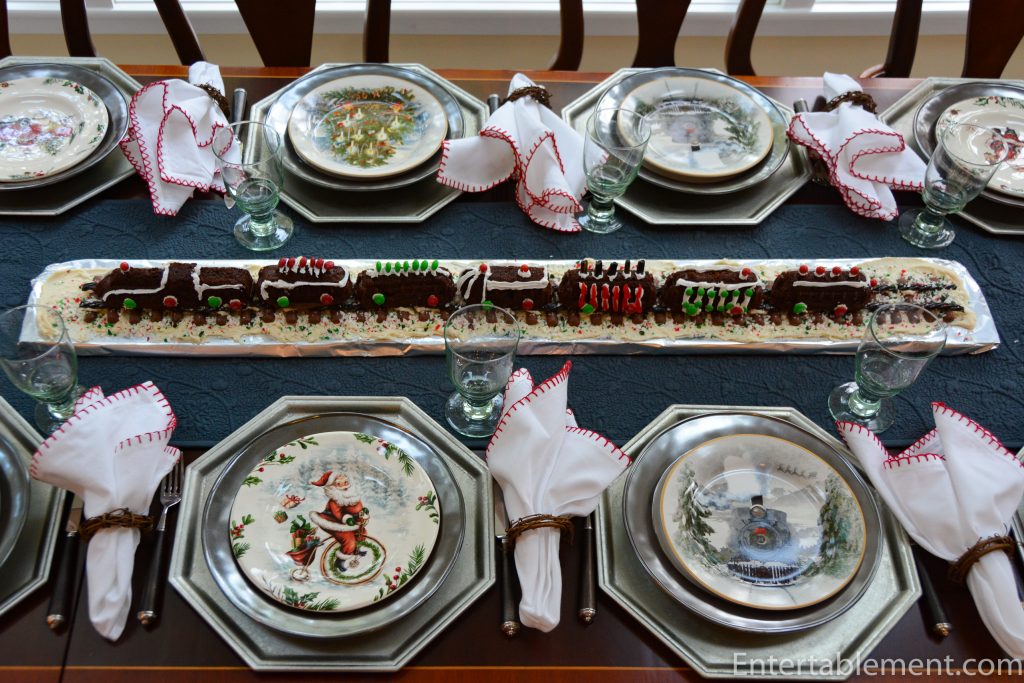 There seems to be a conspiracy for train cuteness between Pottery Barn and Williams Sonoma. Who could resist a train cake pan to go with the plates? I had seen both plates and cake pan a few weeks ago and picked them up, figuring I’d get to baking a cake and setting a table for a family meal sometime before the holidays began in earnest. Well, this weekend I was seized with inspiration (some call it insanity) and weighed in. I have to confess the cake was from a mix, which was probably not the best choice. It was too finely crumbed and didn’t have enough body to release well from the pan. Next time I’ll use more of a sponge cake type batter – heavier on the butter, with less expansion when it bakes. There was a lot of “shrapnel” to be cut off as the cakes rose in the moulds. I had a great deal of trouble getting them out of the pans without a disaster, but cursing heavily under my breath, I was finally able to pry them free with only a few minor mishaps. 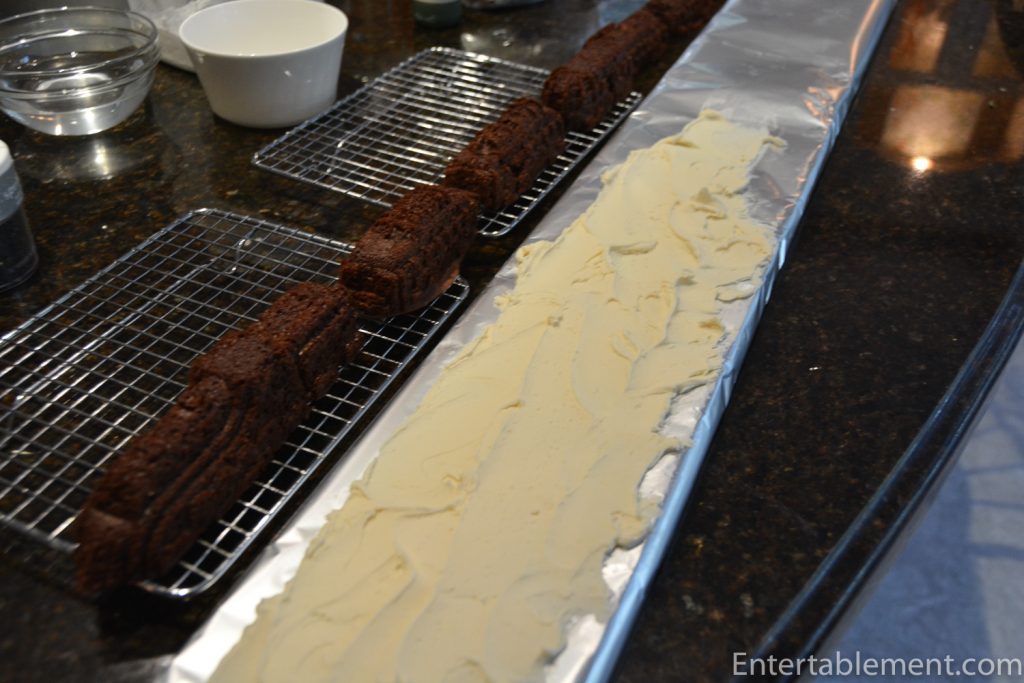 I did a rough calculation of the length of the train when assembled. There are six cars of about 5″ each and the engine is approximately 9″. So the board had to be at least 40″ long. Off I went into the garage and found a discarded shelf that Glenn had put aside to be chopped up for kindling. I dusted it off, covered it with tinfoil and we were set. 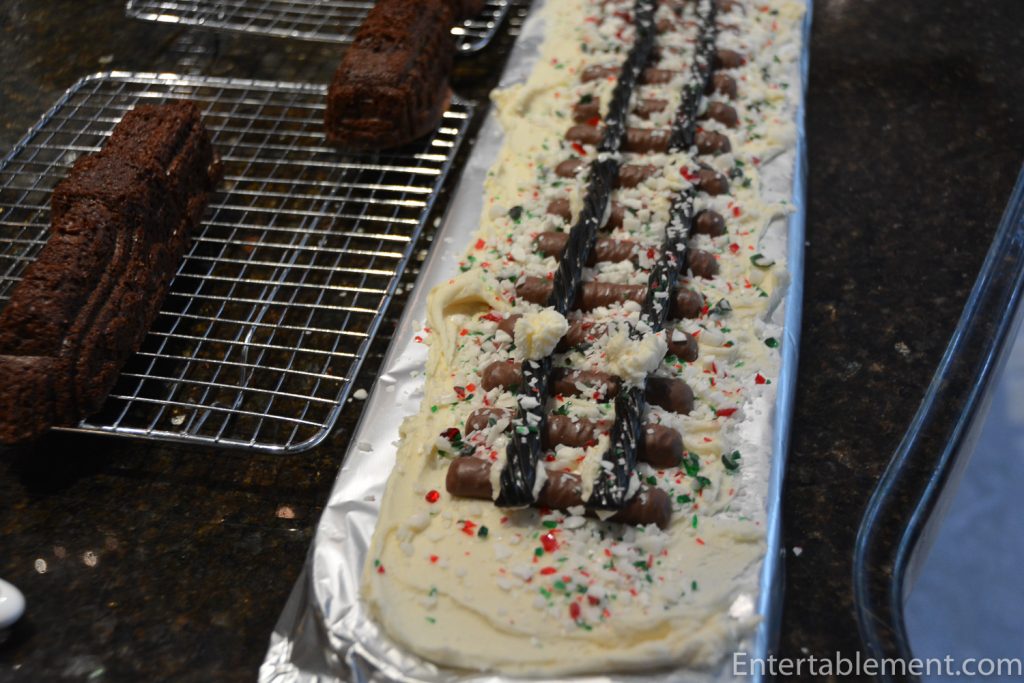 I mixed up bunch of buttercream frosting and used that as the base. The railroad ties are Cadbury fingers, the train rails are black liquorice, and the “gravel” is crushed peppermint. One by one I glued the train cars to the track with a bit more icing. 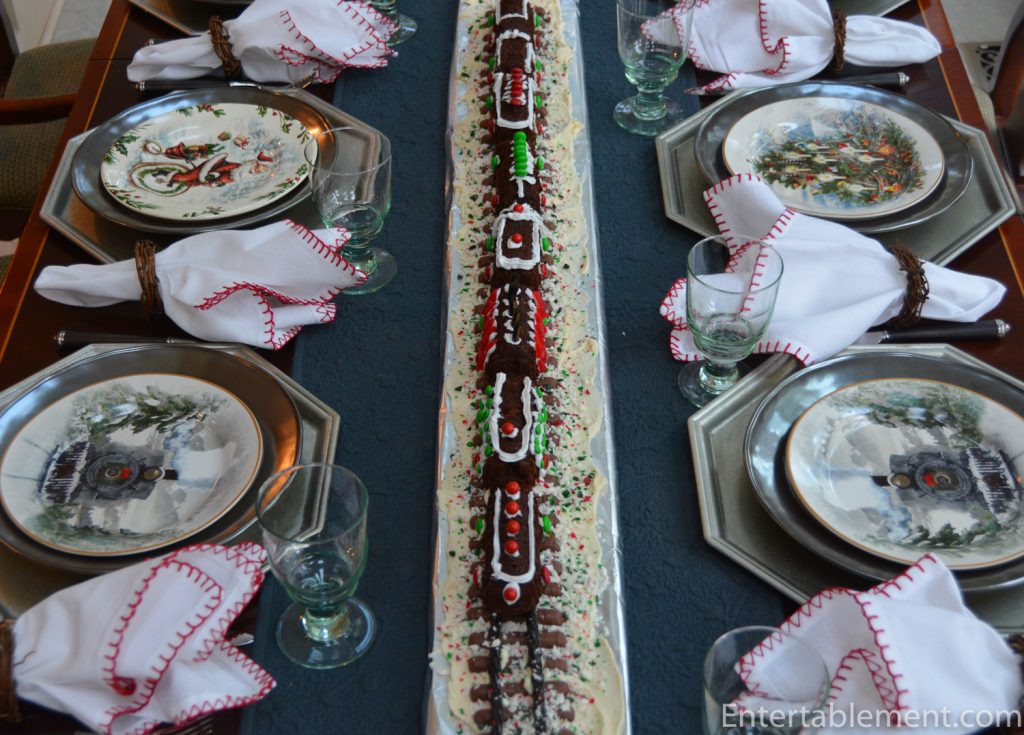 An edible centrepiece! The little girls and big boys were enchanted. Throughout dinner, every small eye was fixed on the train cake as they contemplated which car they would like to devour once their main meal had been dispatched. 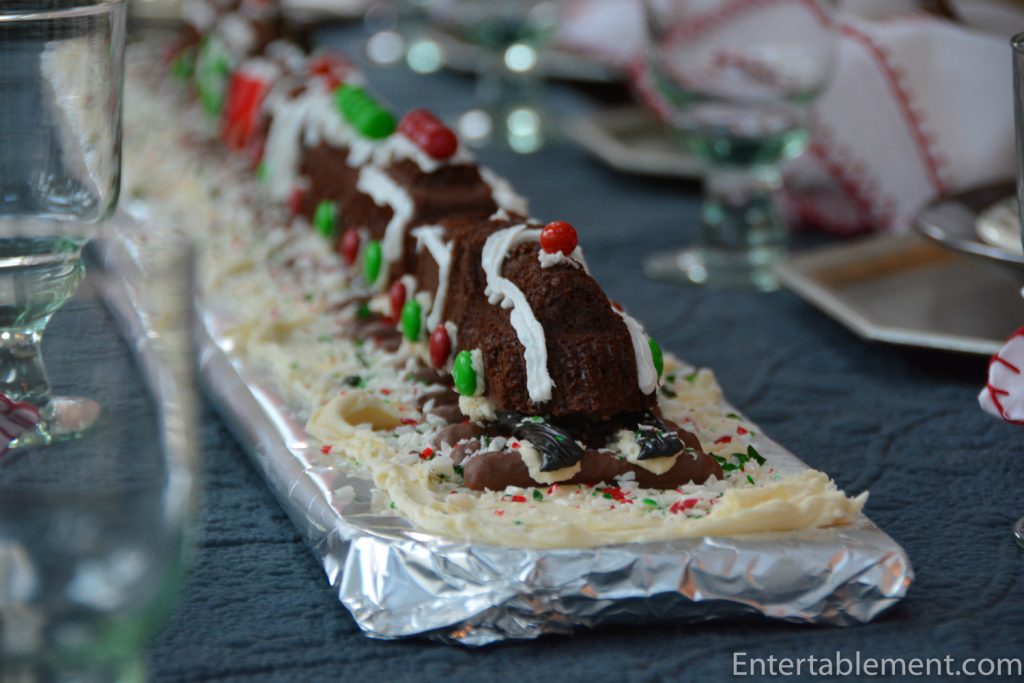 Happily their selections didn’t clash. Everyone got the car they wanted, served with a good dollop of the frosting and track (with ice cream, of course). 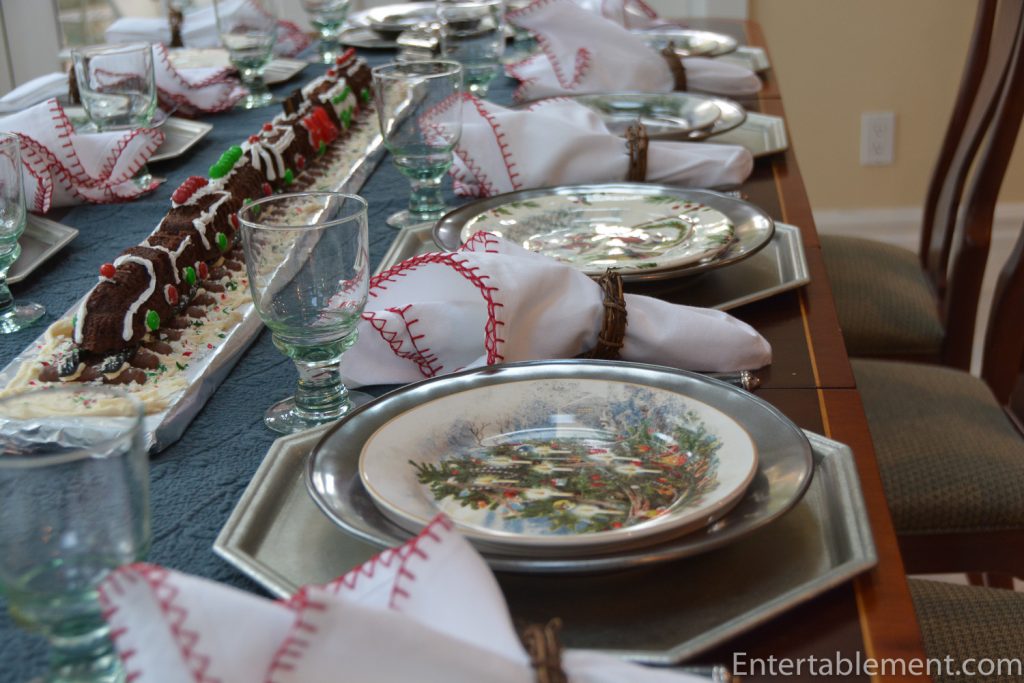 The Trees and Train plates are part of Pottery Barn’s Nostalgic series which includes Tree, Santa and now Train. I bought four Train and Tree salad plates and am still debating Santa. In the interim, I used some Santa Plates from Pier 1’s Winter Wonder series to fill out the ten place settings we needed. The little girls preferred Santa, anyway. 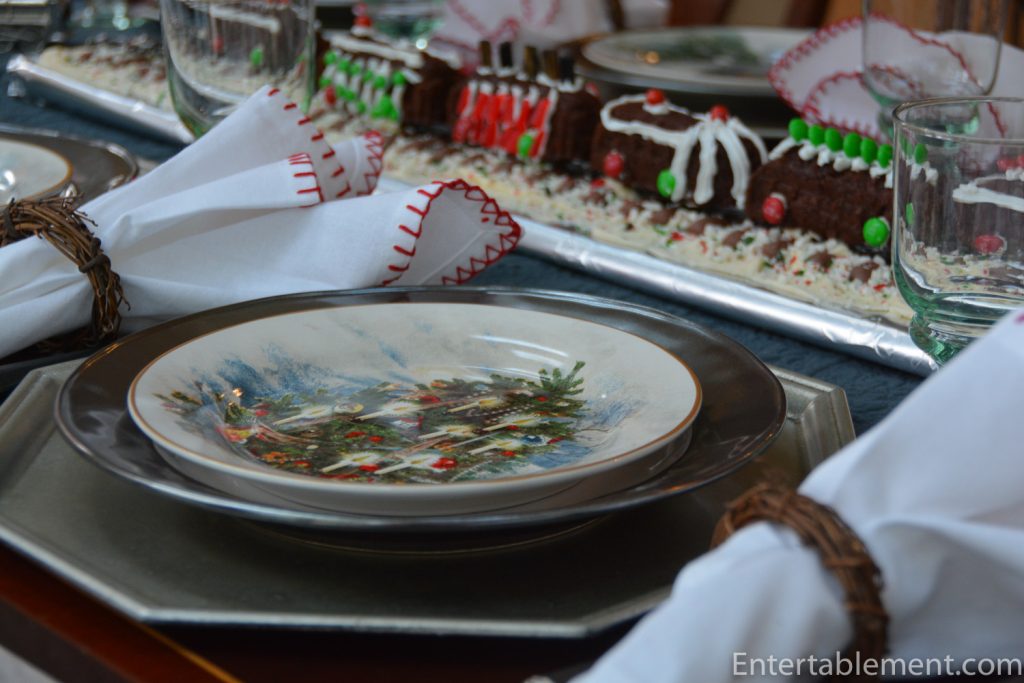 The underplate is Juliska’s Emerson pewter and the chargers are from Pottery Barn several years ago. 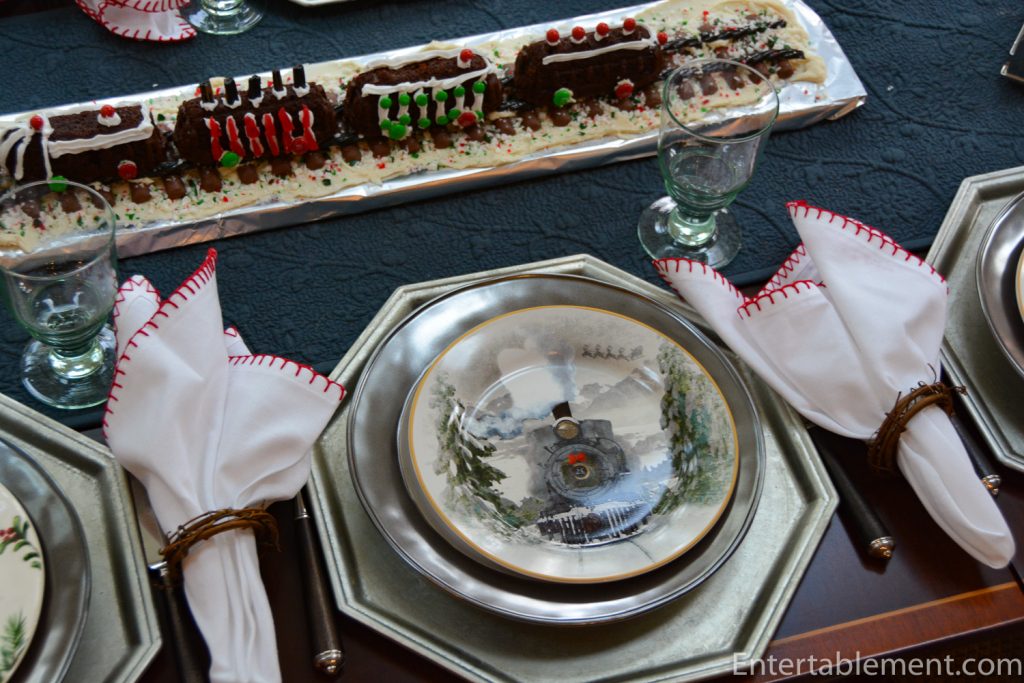 The Cupola flatware is from Williams Sonoma. 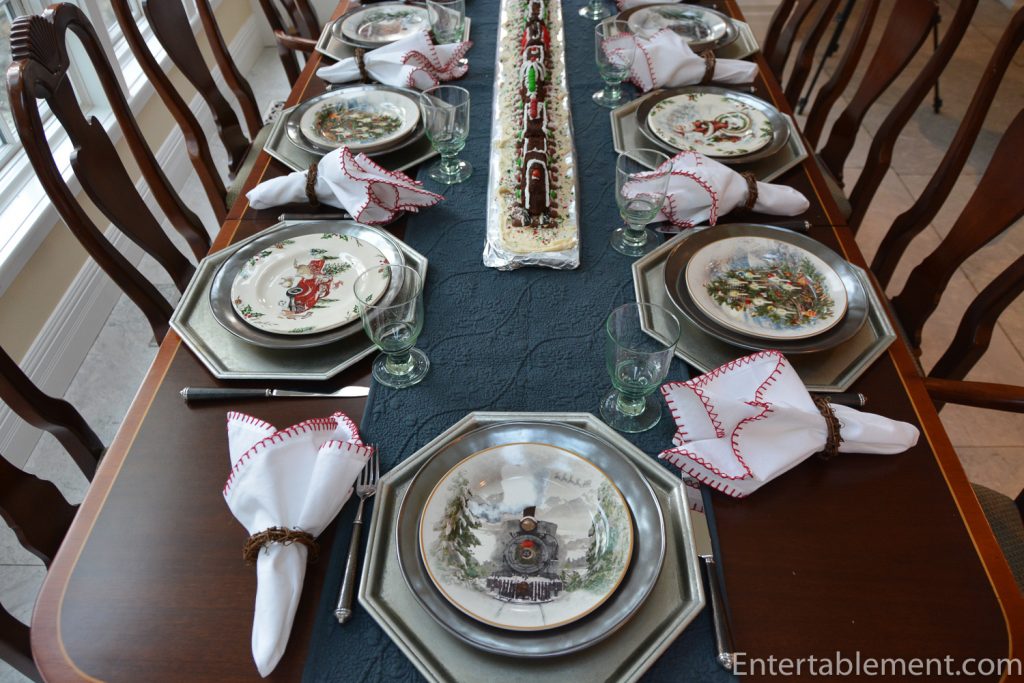 The runner is Vine Floral Boutis, also from Williams Sonoma. That particular blue grey  is discontinued, but they have other colours. The quality is amazing. They wash  like a dream, and come out as good as new, with no twisting or shrinking. 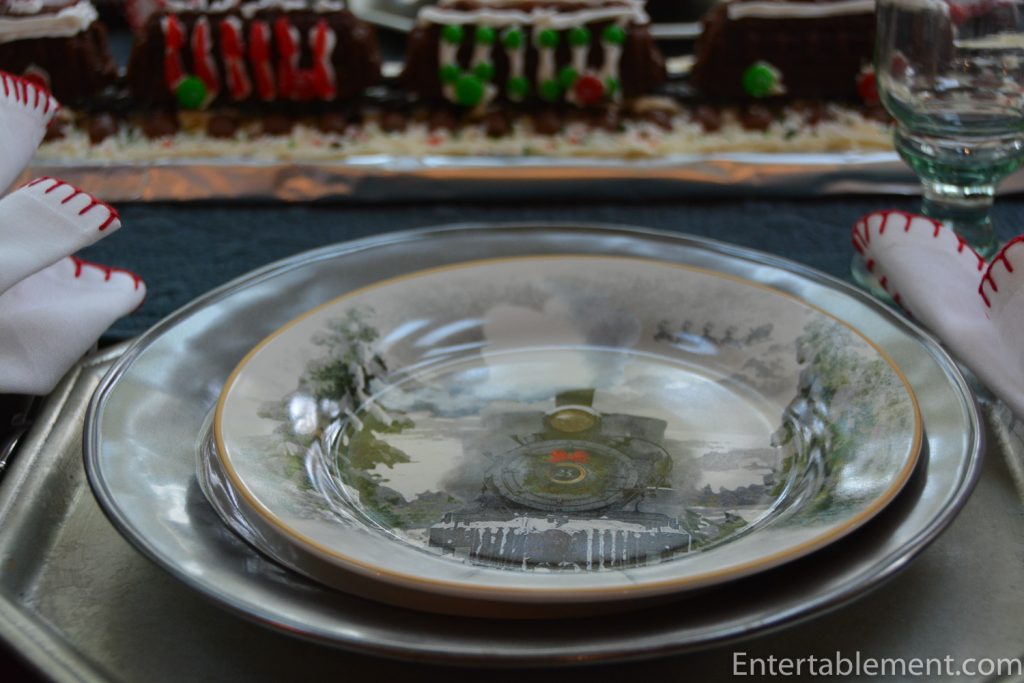 Pottery Barn has done a lovely job with this Nostalgic Series. The drawings have a soft, vintage feel and cover the entire plate beautifully. 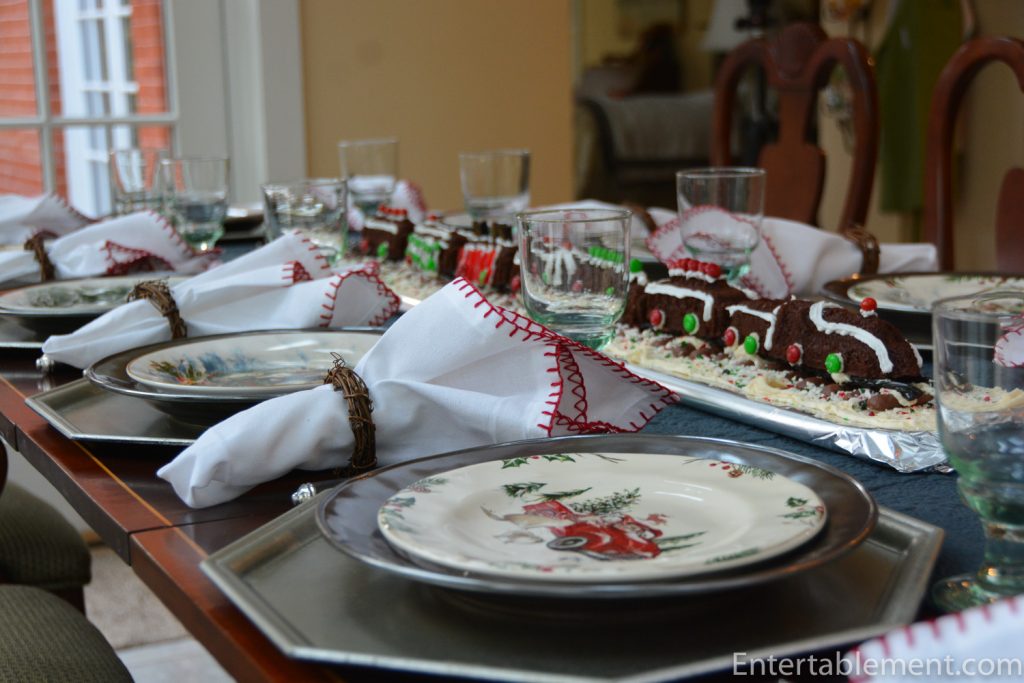 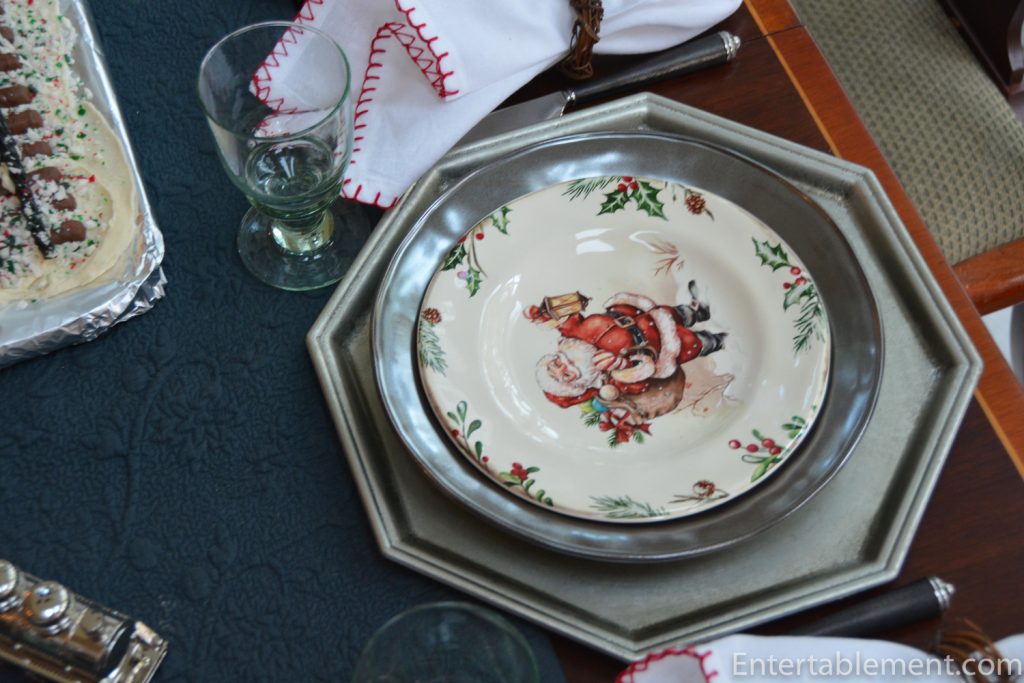 The Pier 1 Winter Wonder plates worked well as fill ins for this setting. They go with anything, it seems. 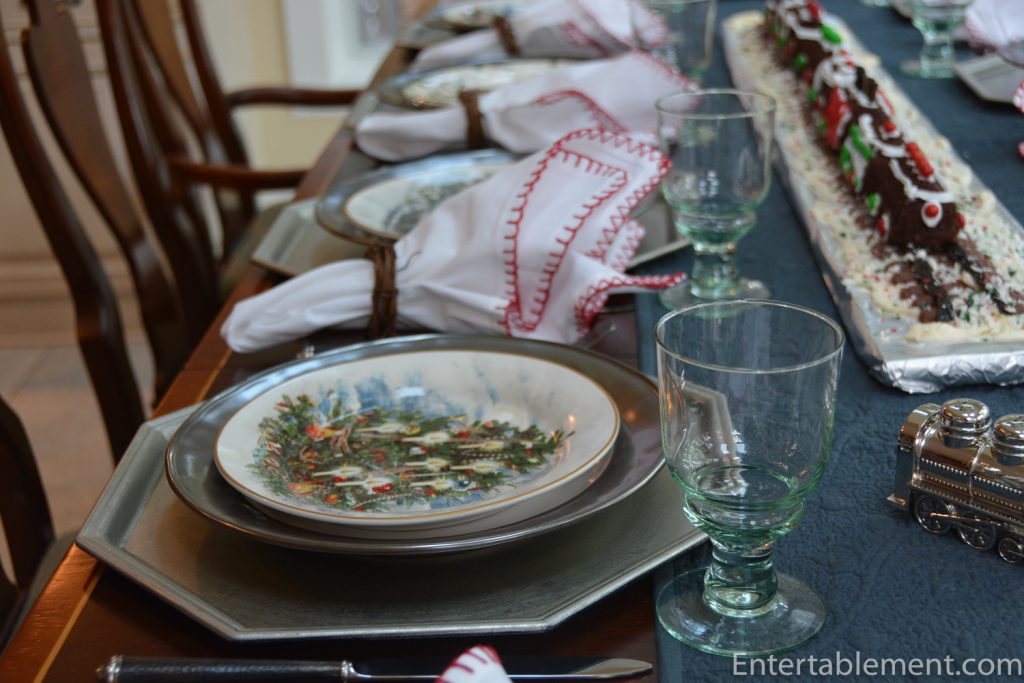 The napkins are a HomeSense/HomeGoods buy. I liked the way the blanket stitched edging echoed the railway ties. The glasses are from a million years ago and I have no idea where they came from. They’re a go-to, dishwasher safe, child-friendly glass we often use for family meals. 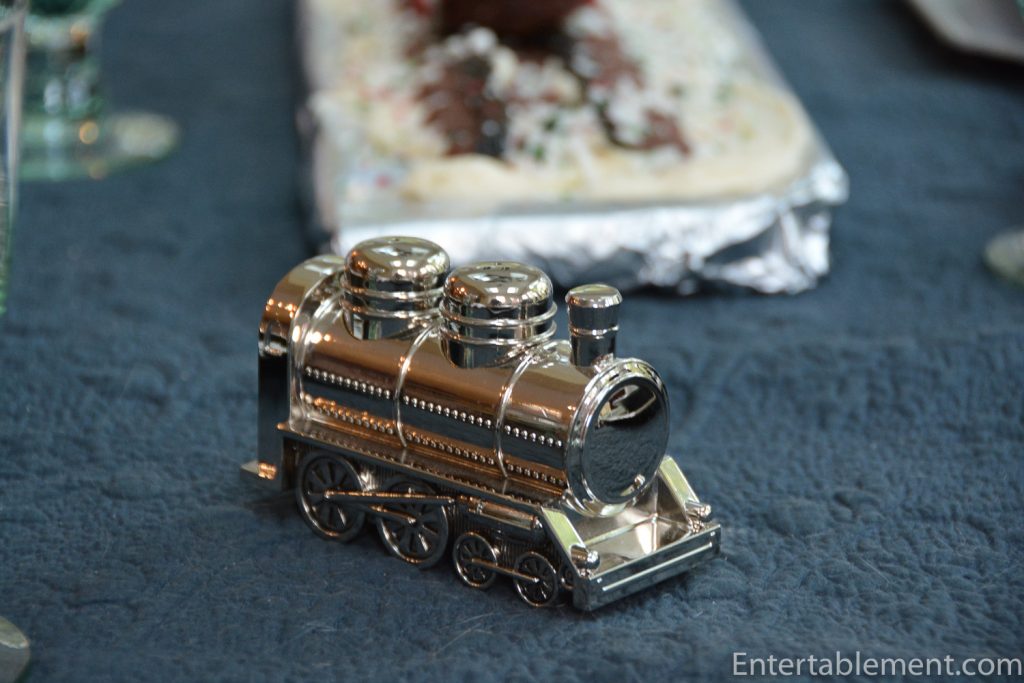 Pottery Barn also produced a train themed salt and pepper shaker this year. The shakers are the engine stacks. Too cute to pass up! 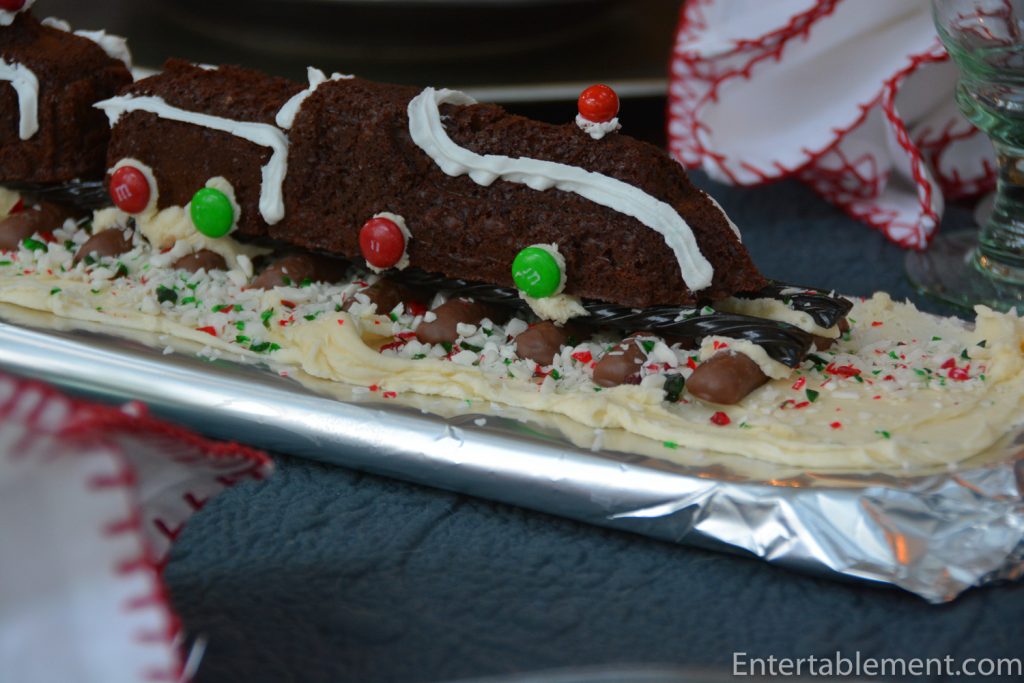 I am not a particularly skilled or gifted cake decorator, so the icing is a bit wobbly. I had able assistance in placing the M&Ms for the train wheels from my daughter-in-law, Annie. She got right into the fun and we decorated the train in record time. Little girls were waiting to make chocolate chip cookies, and we knew their patience would only extend so far. 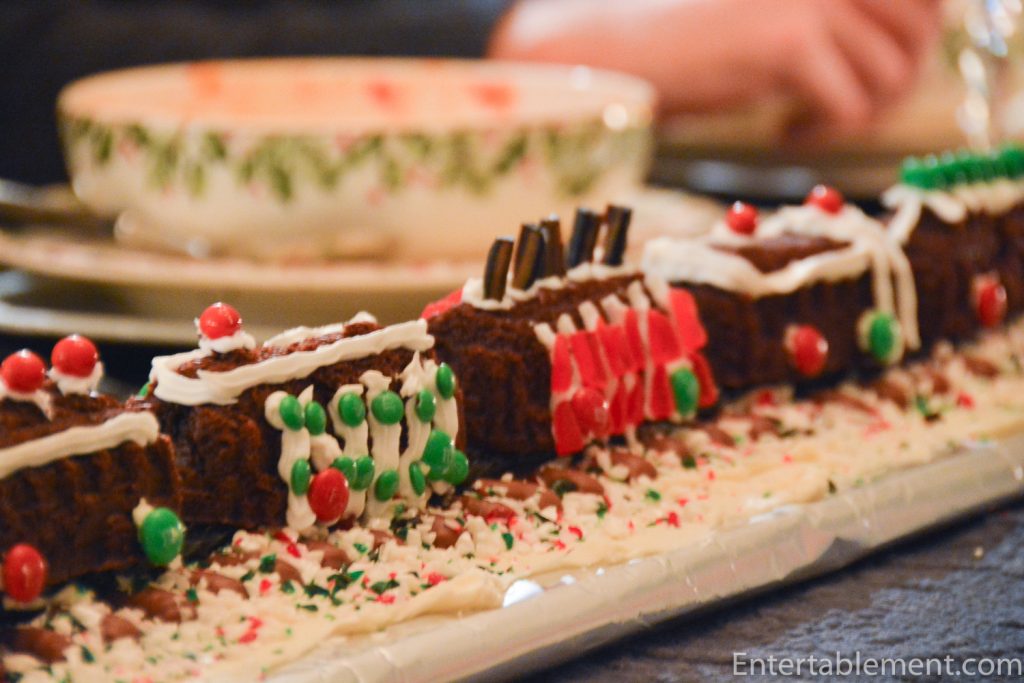 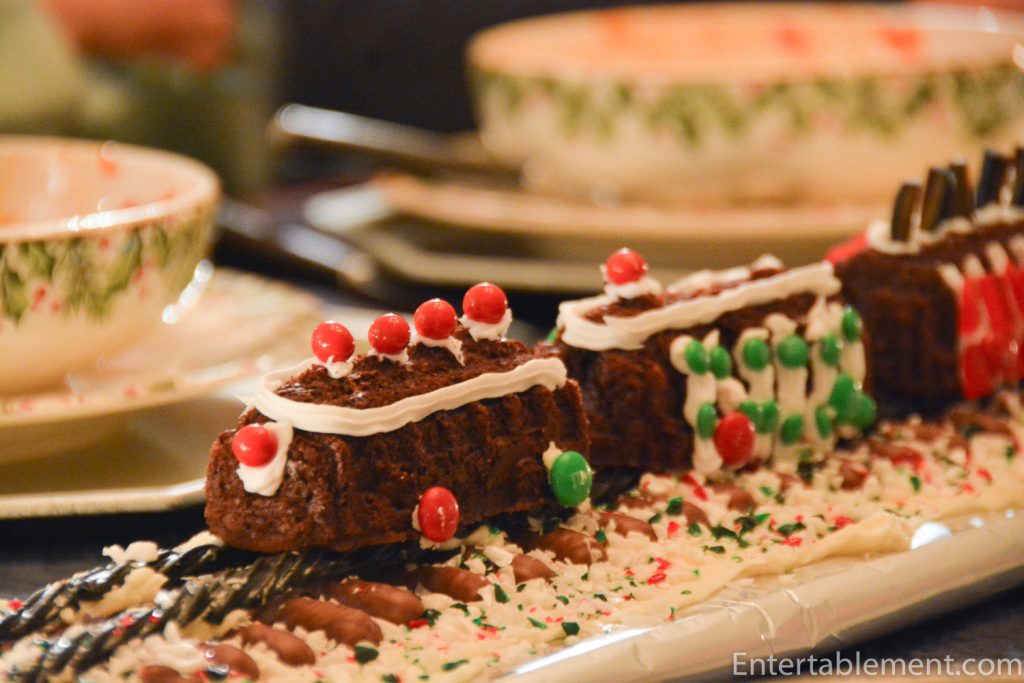 We had Pappardelle with Chicken, Rosemary and Green Olives for our main course, and used Pier 1’s Winter Wonder Christmas Tree dinner plates and pasta bowls. I bought them last year, and use them a lot throughout the holiday season. The train cake remained unmolested throughout the meal, which I thought was remarkable. 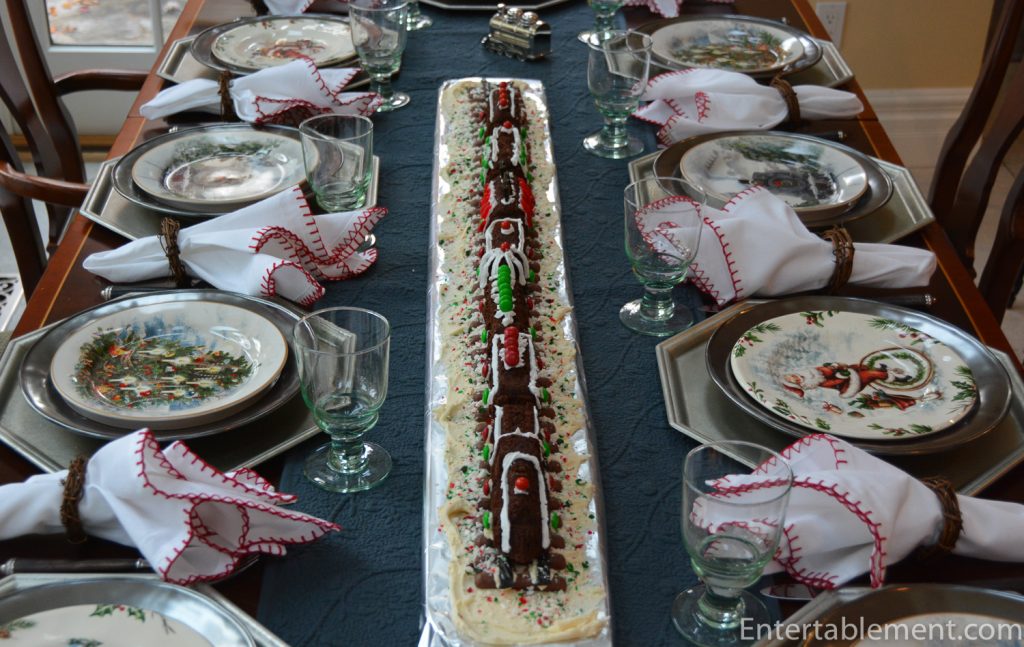 To me, the most fun of the Christmas season is the lead up, and having a bunch of granddaughters aged six and under makes it quite magical. 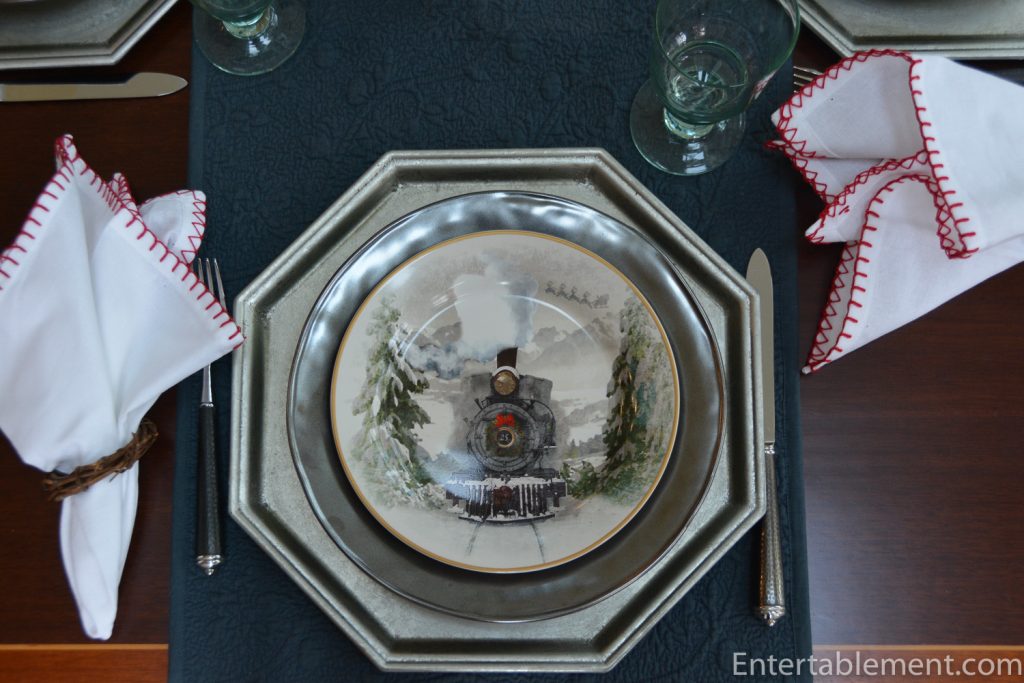 They provide a wonderful excuse to indulge childhood dreams, like train cakes and plates… 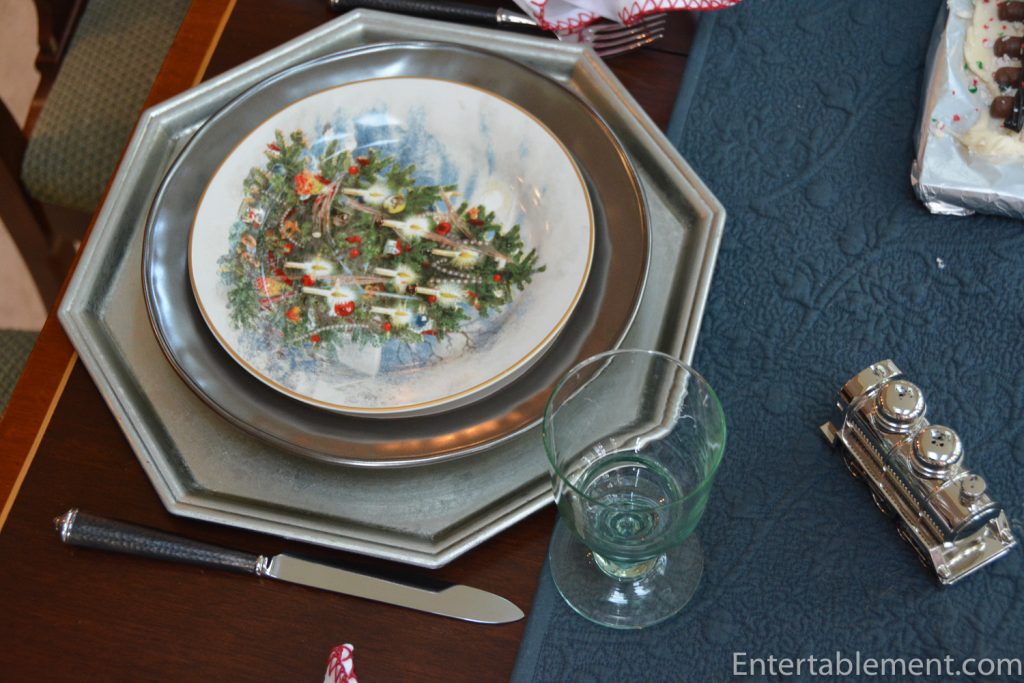 …and Christmas trees, of course.