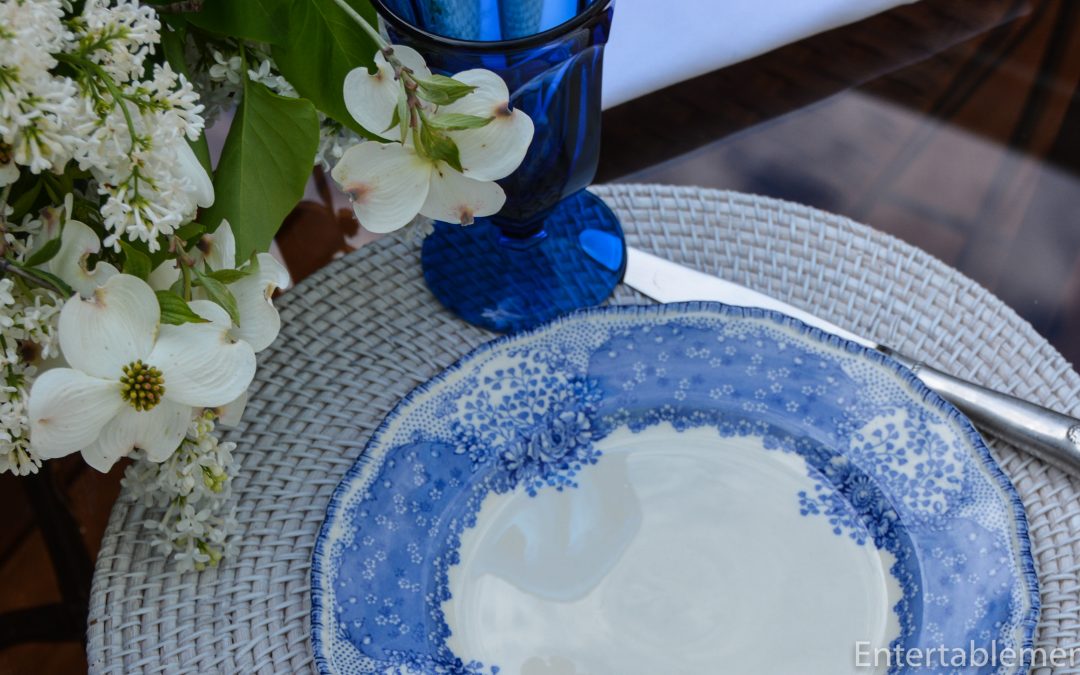 Classic blue and white. Suitable for any season, it seems particularly appealing in the warmer months. It is because it reminds us of pools of cool water below a soaring blue sky? 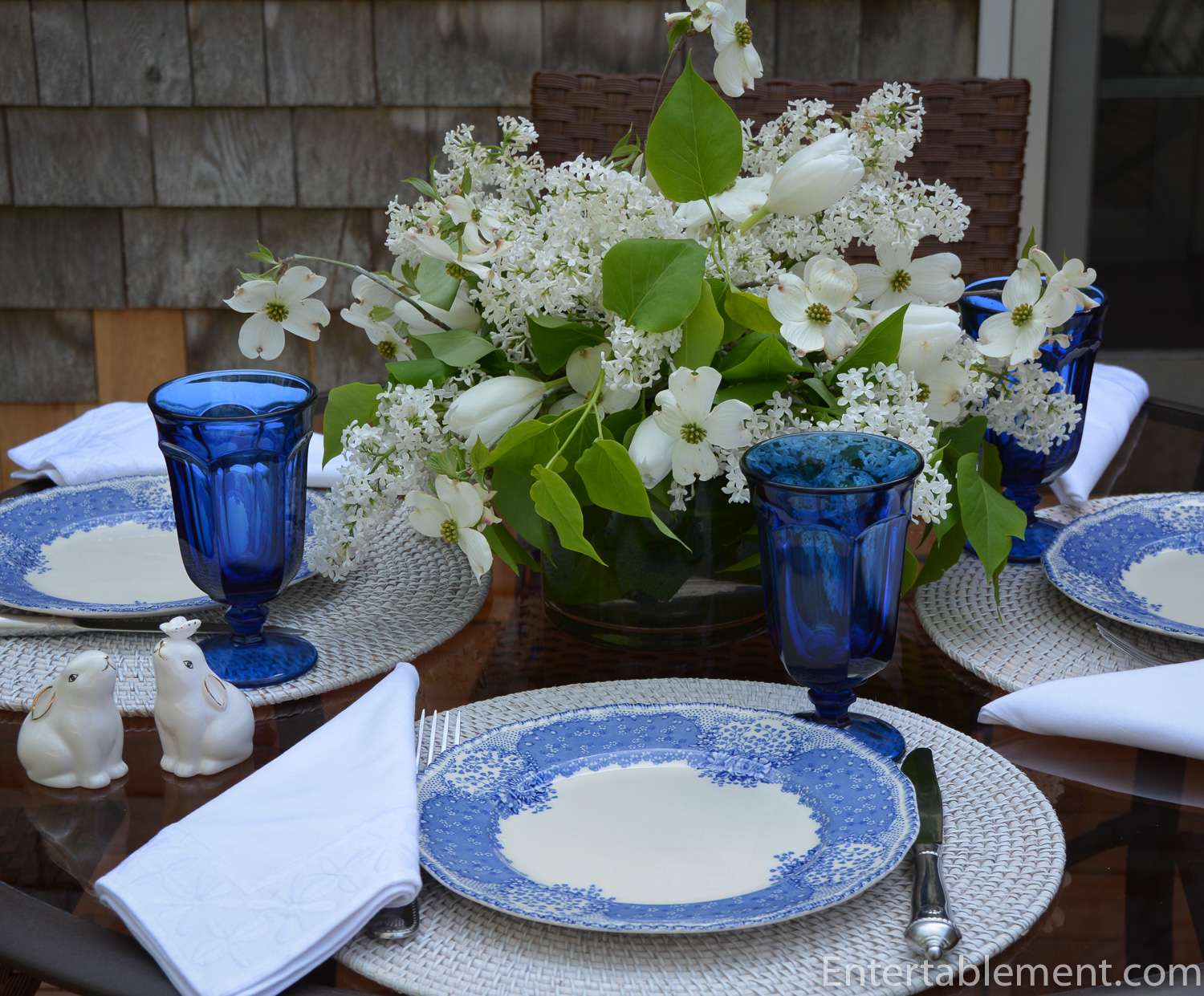 This pattern by Royal Doulton (romantically called RD78) reached out to me one day when I was on a “floral pattern” quest at Replacements, and I’ve never seen any more of it. There were only five dinner plates, which is not something I generally go for, but I fell for the delicate, intricate detail around the shoulder and rim of the plate. Isn’t it puuurty? 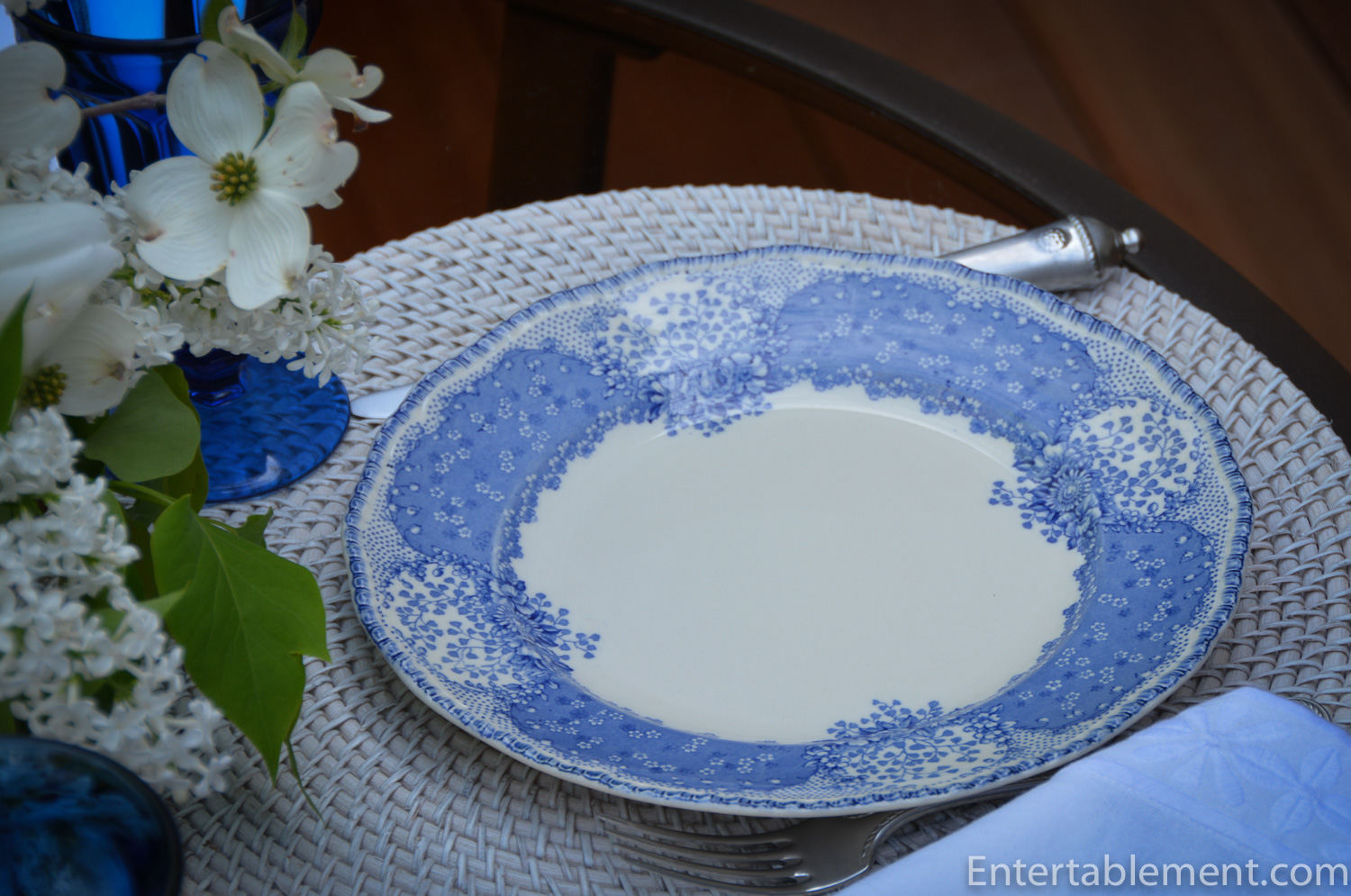 Given Replacements’ numbering system, I believe the RD stands for Royal Doulton. I must take a closer look at the back of the plate sometime, as it may give further clues to its identity. I was similarly flummoxed on WW121, which turned out to be Wedgwood for Thomas Long Company and once I did a bit more digging on that, the story ended very happily, with additional pieces turning up on eBay. 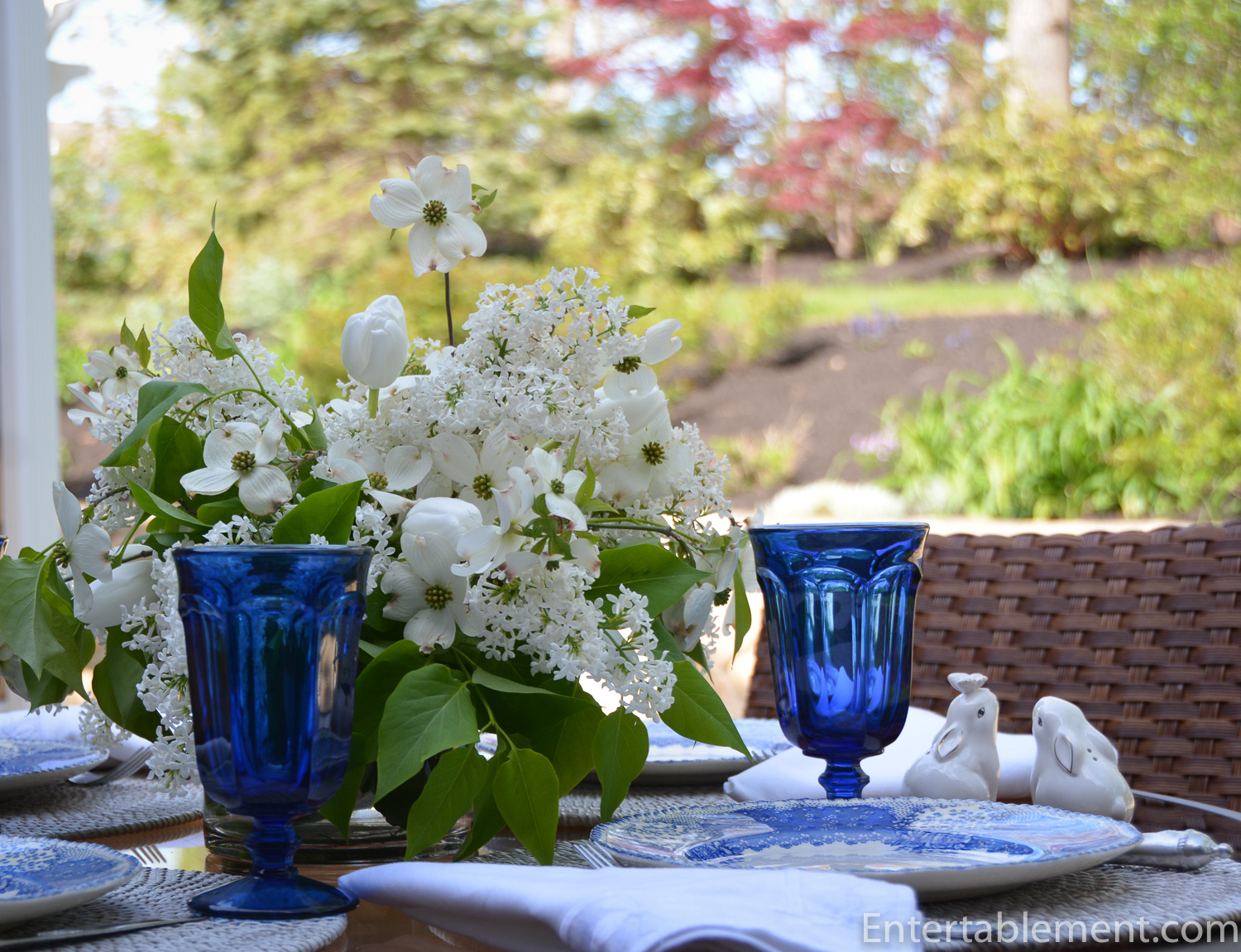 In the meantime, let’s just enjoy what we have, shall we? 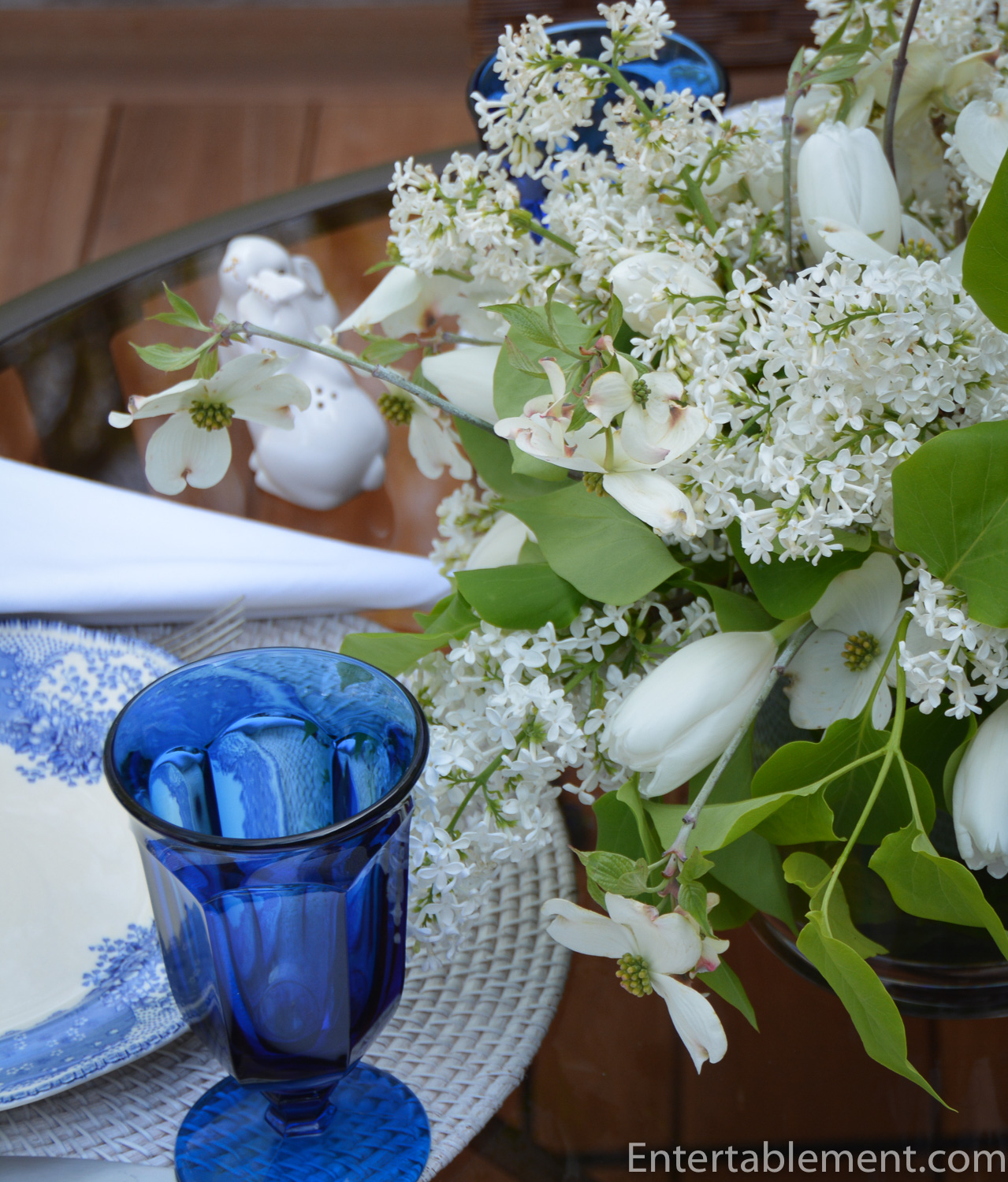 I shot these photos last spring when the dogwood and white lilacs were blooming. Almost, almost… 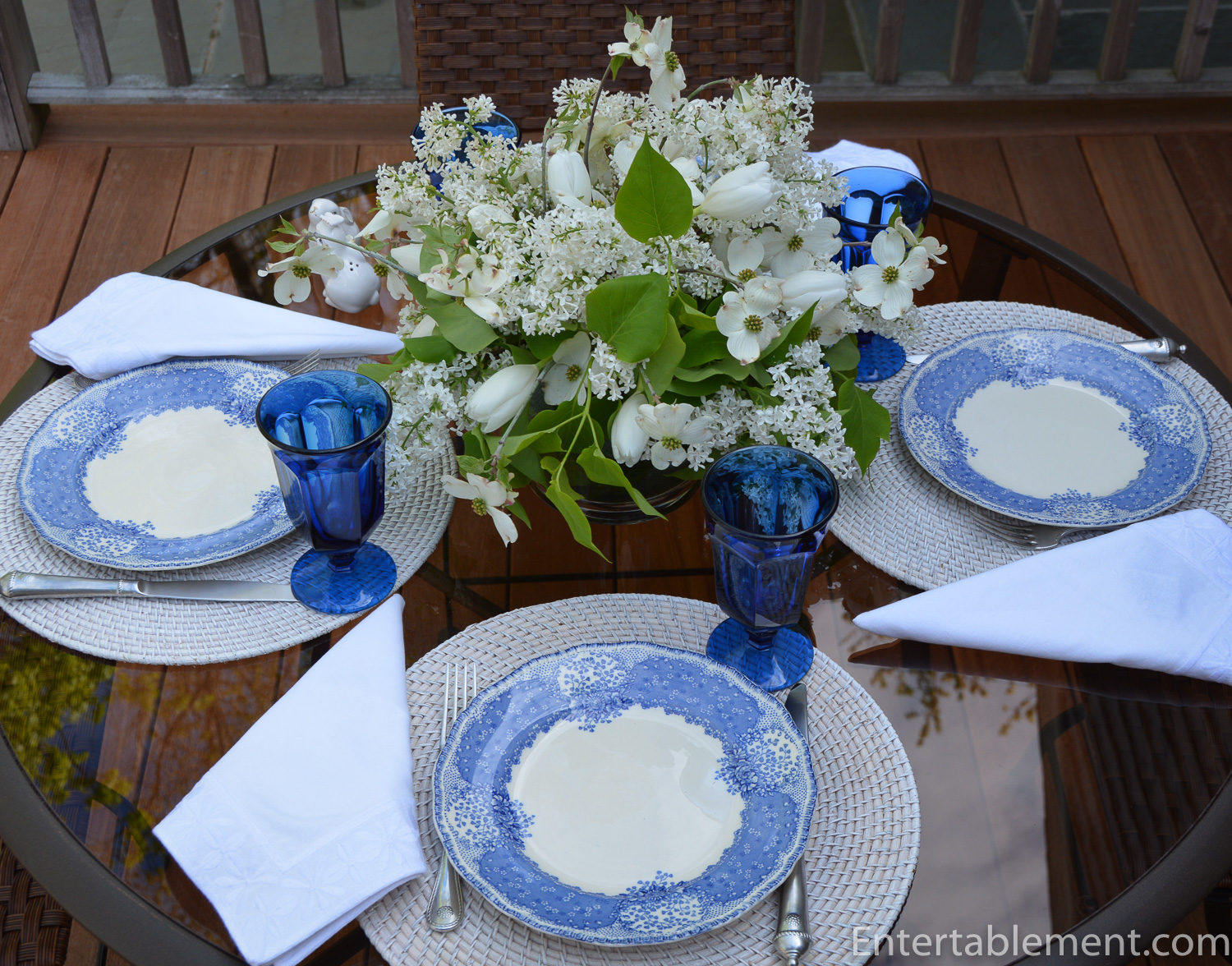 White rattan placemats from Pier 1 (discontinued, but may be back in the summer), Berry & Thread cutlery by Juliska, simple white napkins and Old Williamsburg Deep Blue iced tea glasses by the Ohio Glass Company.  C’est tout. 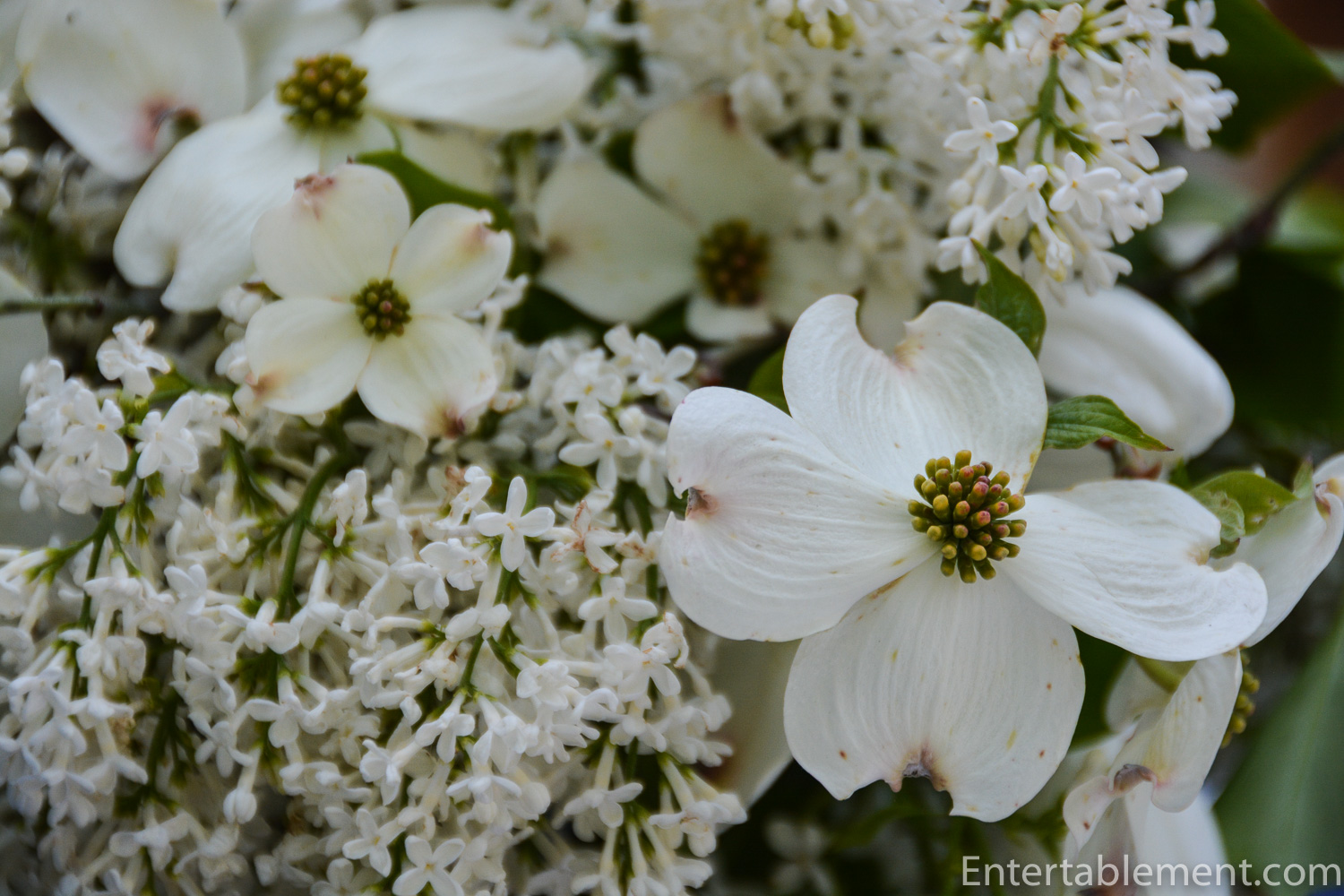 Can’t you just smell that delicious, intoxicating scent of lilacs? One of my very favourite flowers for its fragrance, it comes but once a year, so I bury myself in it during the short season. 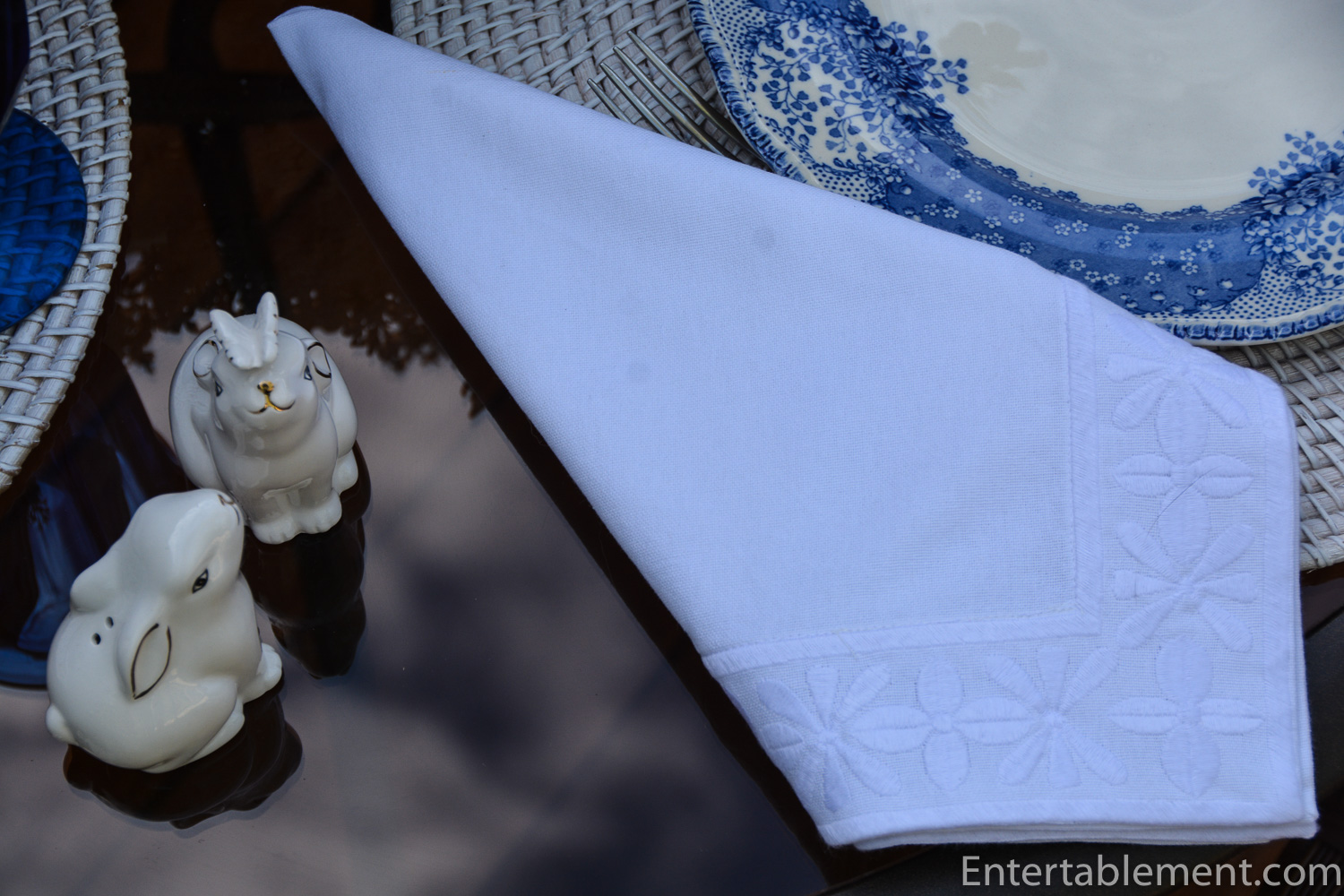 The little bunny salt & peppers from Pier 1 a couple of years ago are sniffing away, themselves! Clearly they love the lilac, too. 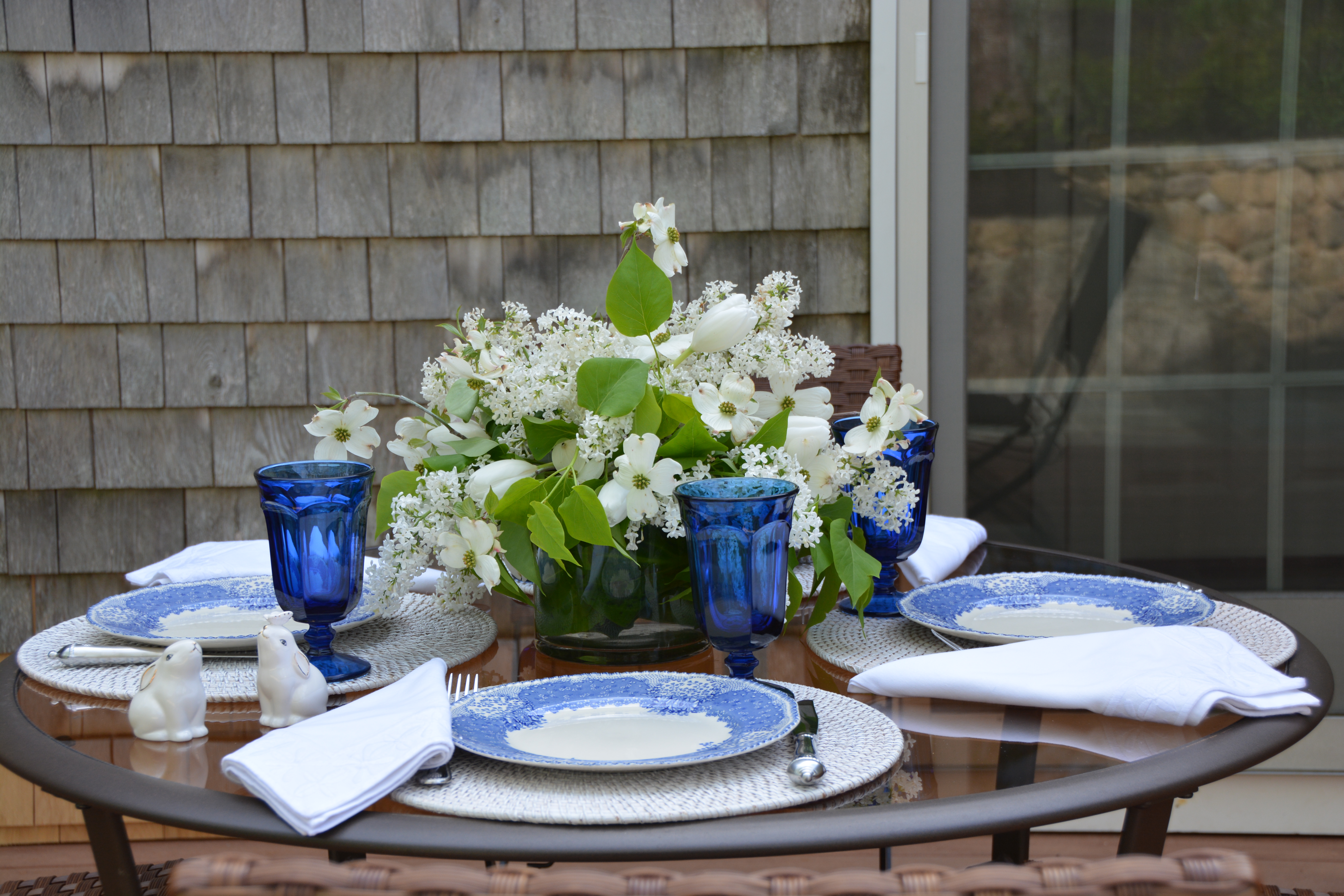 Not long now until we will be immersing ourselves in spring flowers once more. My friends in the southern parts of the US are enjoying it now! We northerners take a bit longer, but it’s coming. The hellebores were blooming in my garden last week, and a very welcome site it was! 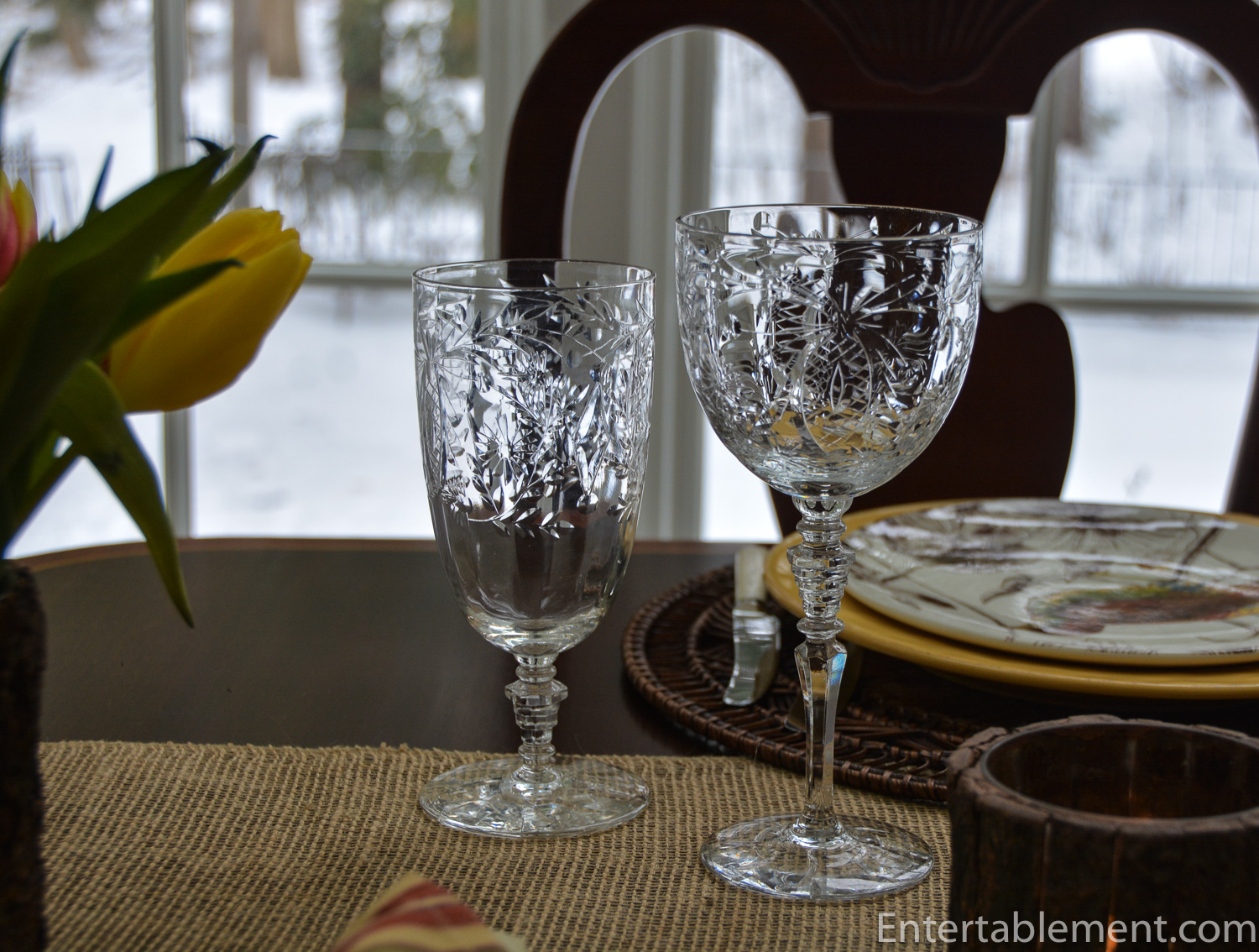 Update on the “is it a bug, or is it a pineapple?” question from last week. What is that thing in the middle of the glass on the right? The opinions seem to be equally divided. Some hold that the absence of head and antennae on the “body” of the insect push us in the direction of an elongated, pointy pineapple. Others find evidence of wings in the etchings on either side of the object, and conclude that it is a strange, headless insect. I’m beginning to conclude that we have a pineapple-bug. 🙂 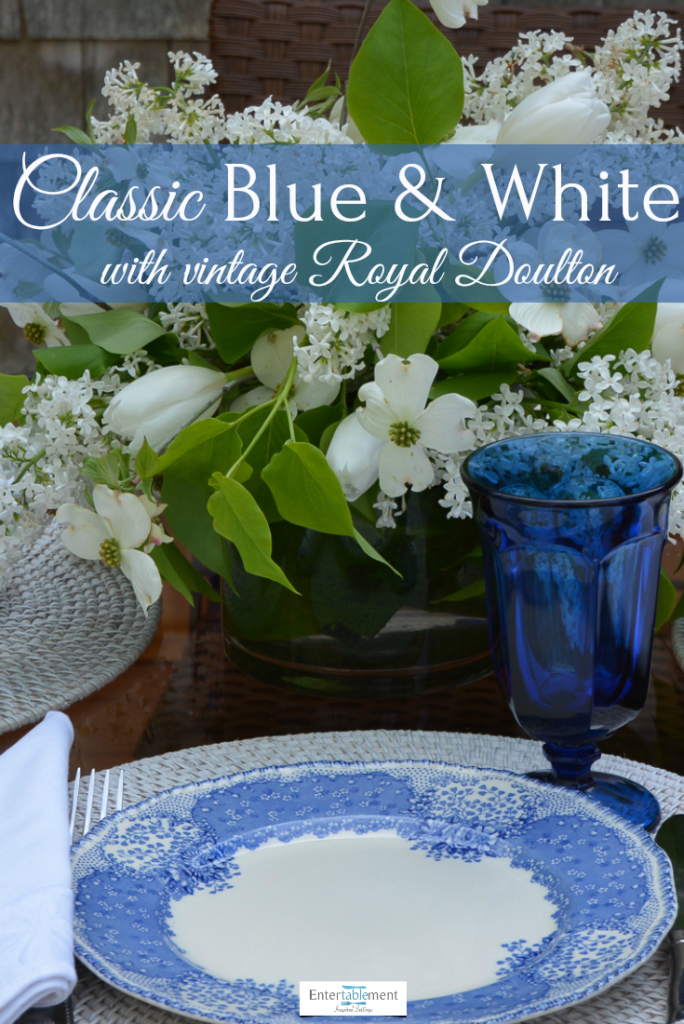