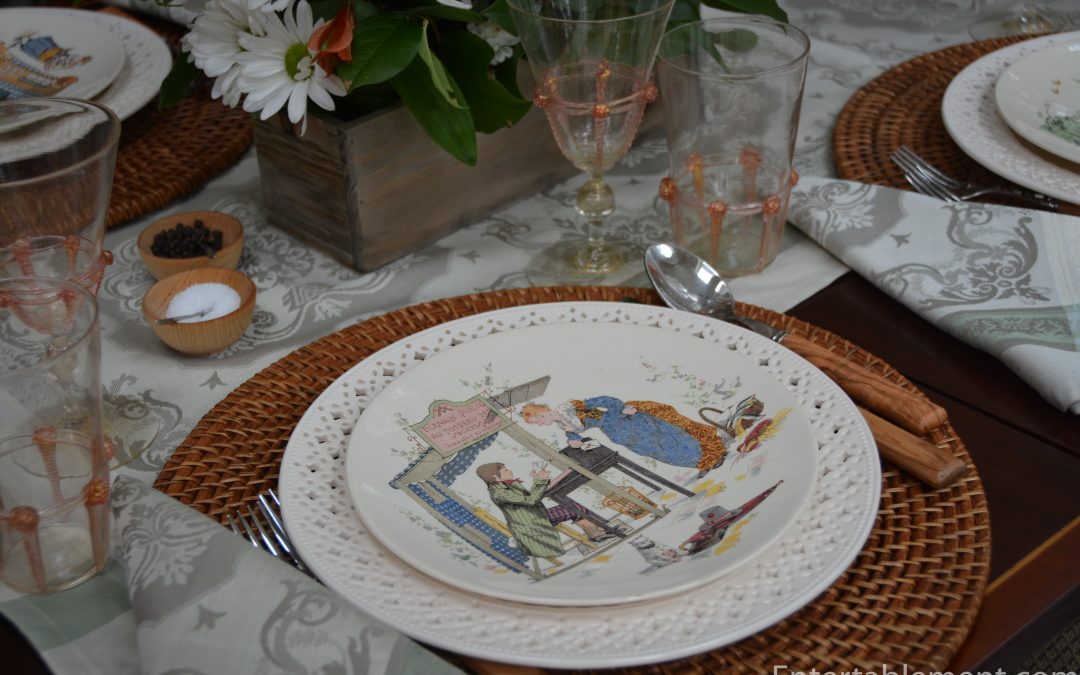 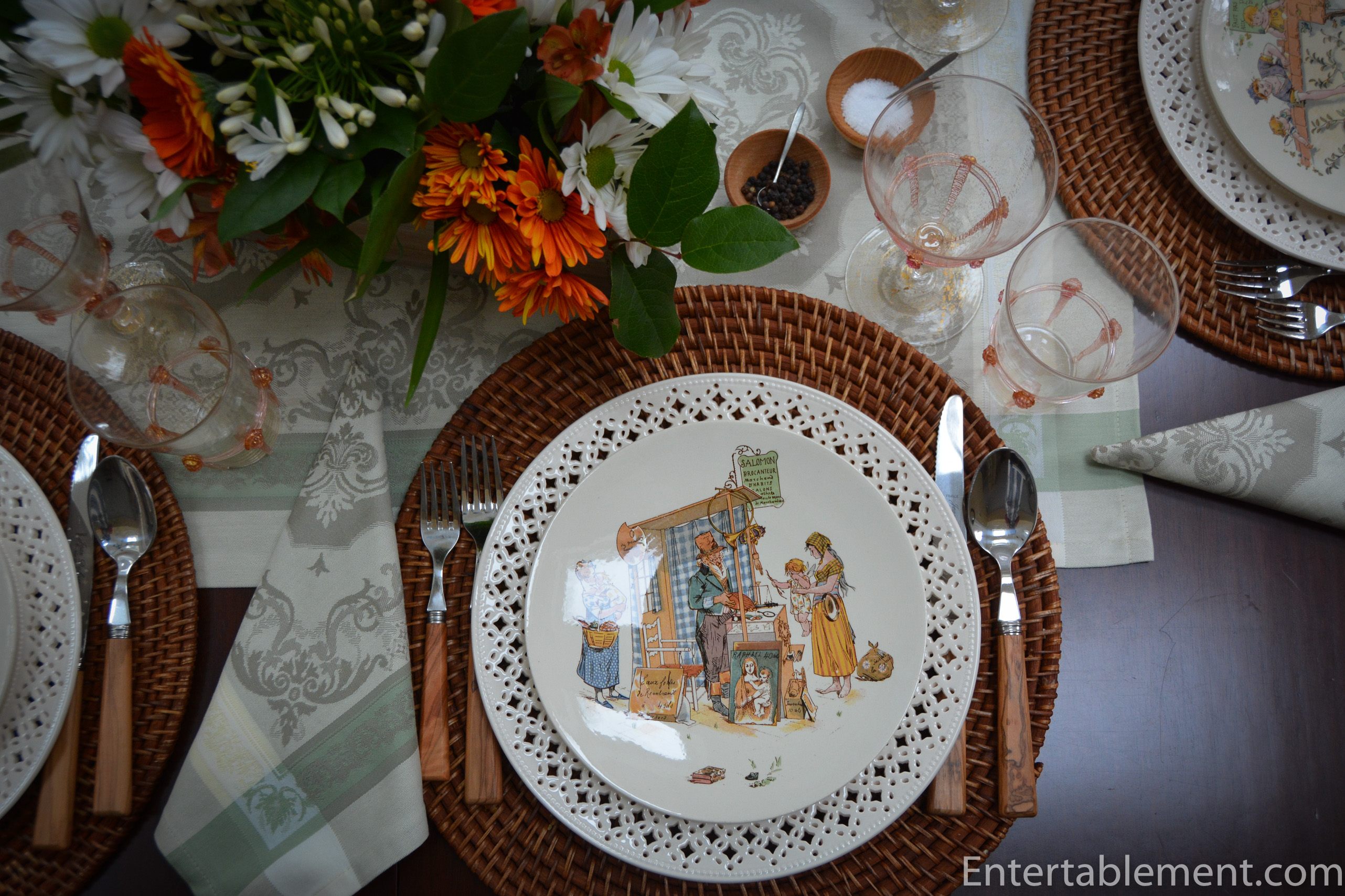 I found these quite by accident during my quest to track down the last couple of plates in the Choisy du Roi French Rabbits, and was captivated by the delicacy of the humorous illustrations. 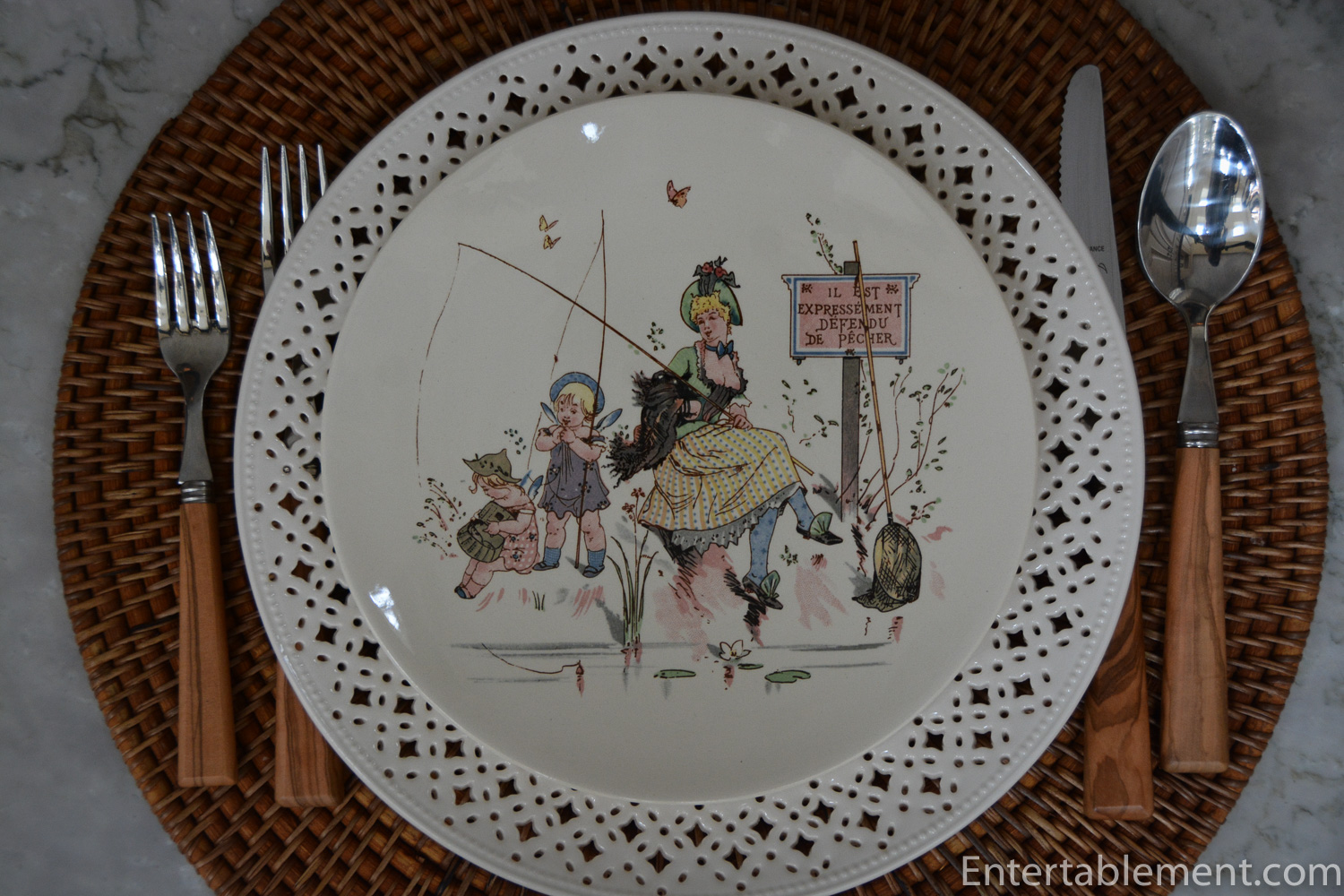 Who could resist? The plates are in amazingly good condition, and seem to only have been used as cabinet plates; the glaze is perfect and almost too shiny. It was difficult to get shots without glare. I’ve tried to provide translations to the captions shown on the signs of each plate. Forgive my horrible French… 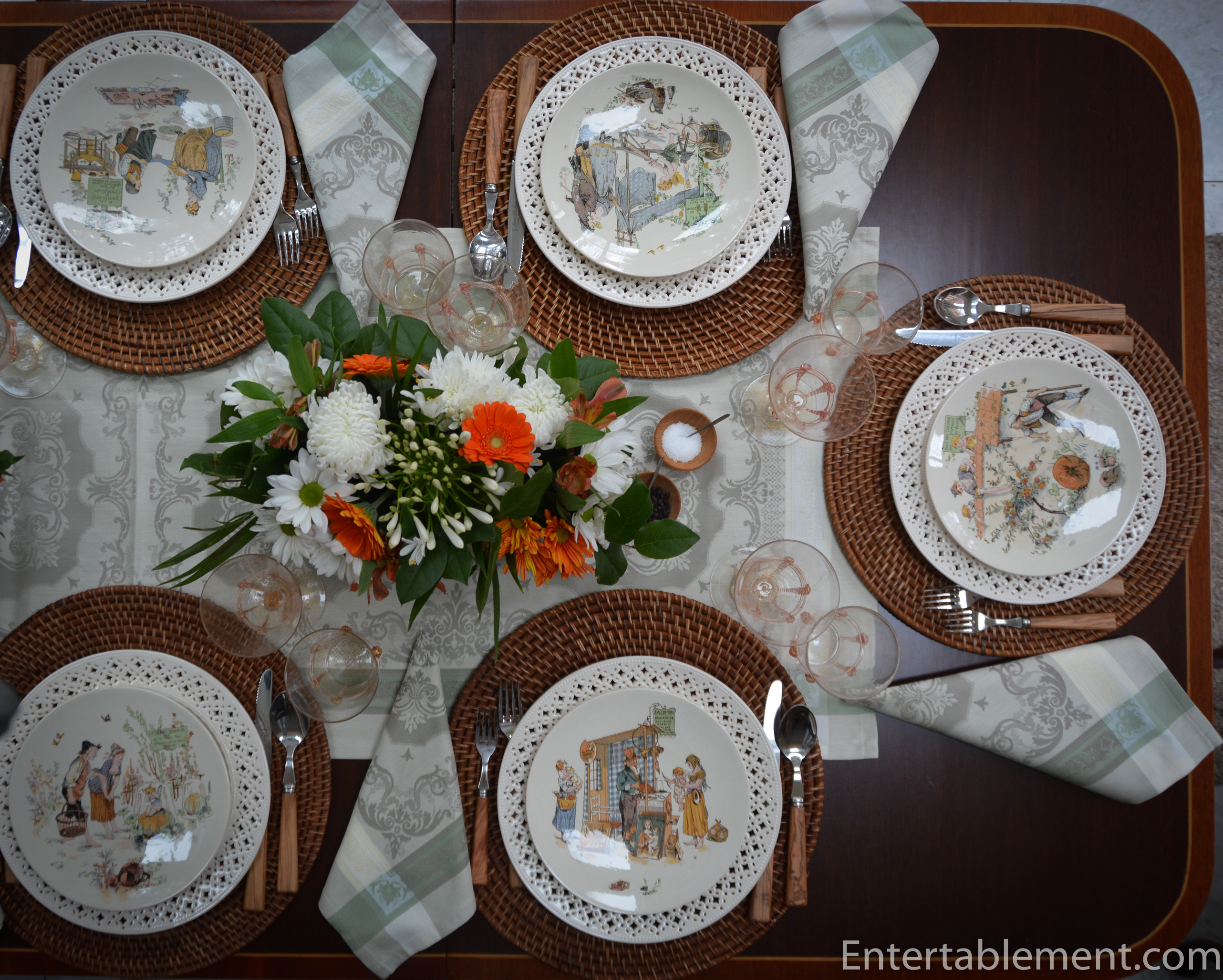 Antoine-Albert Richard’s best-known patterns are the “Service Parisien” for Creil Montereau and The “Enfants Richard” decor for Sarreguemines.

The melon and sage green colours were the most vibrant, so that’s what I went with in setting the table. 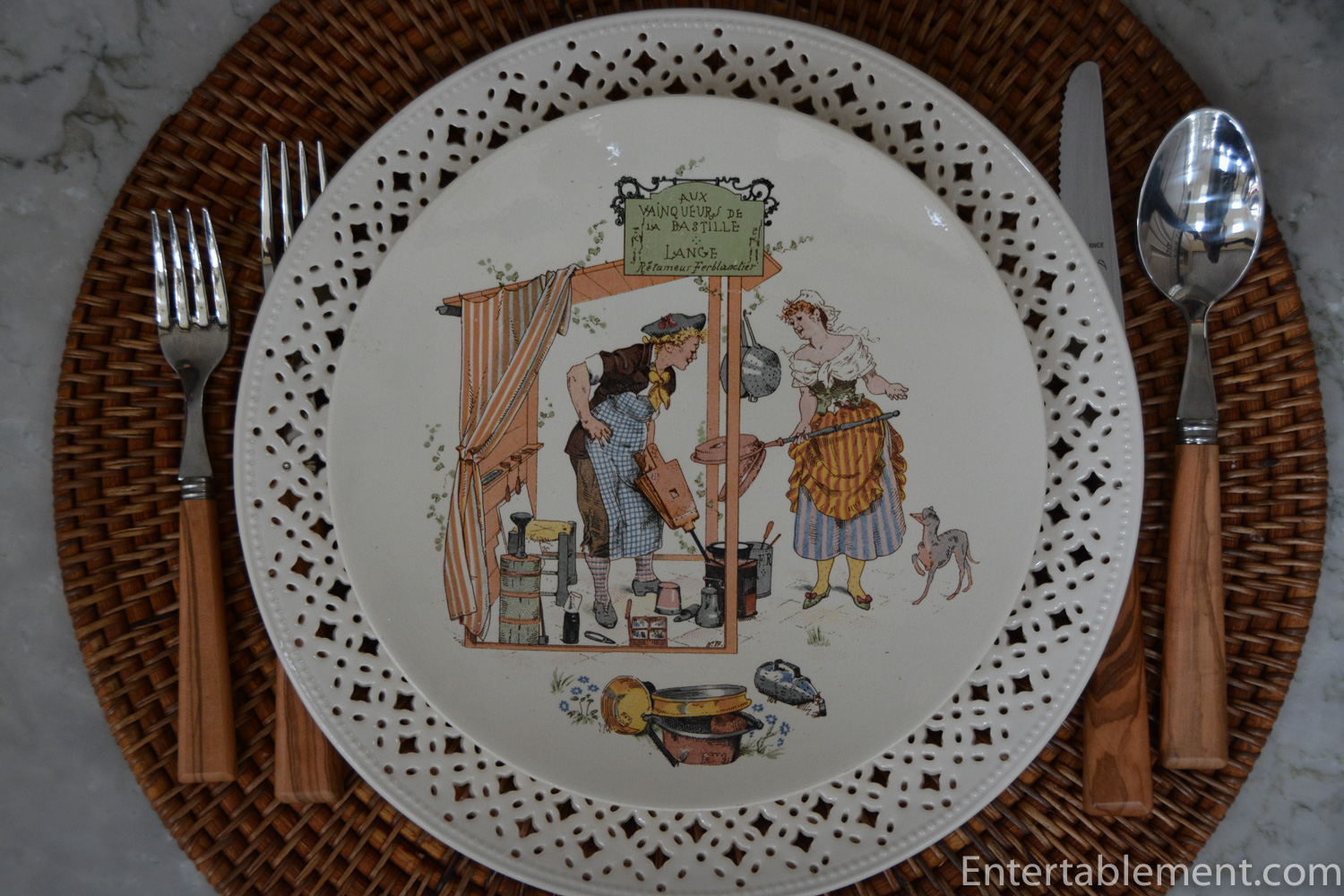 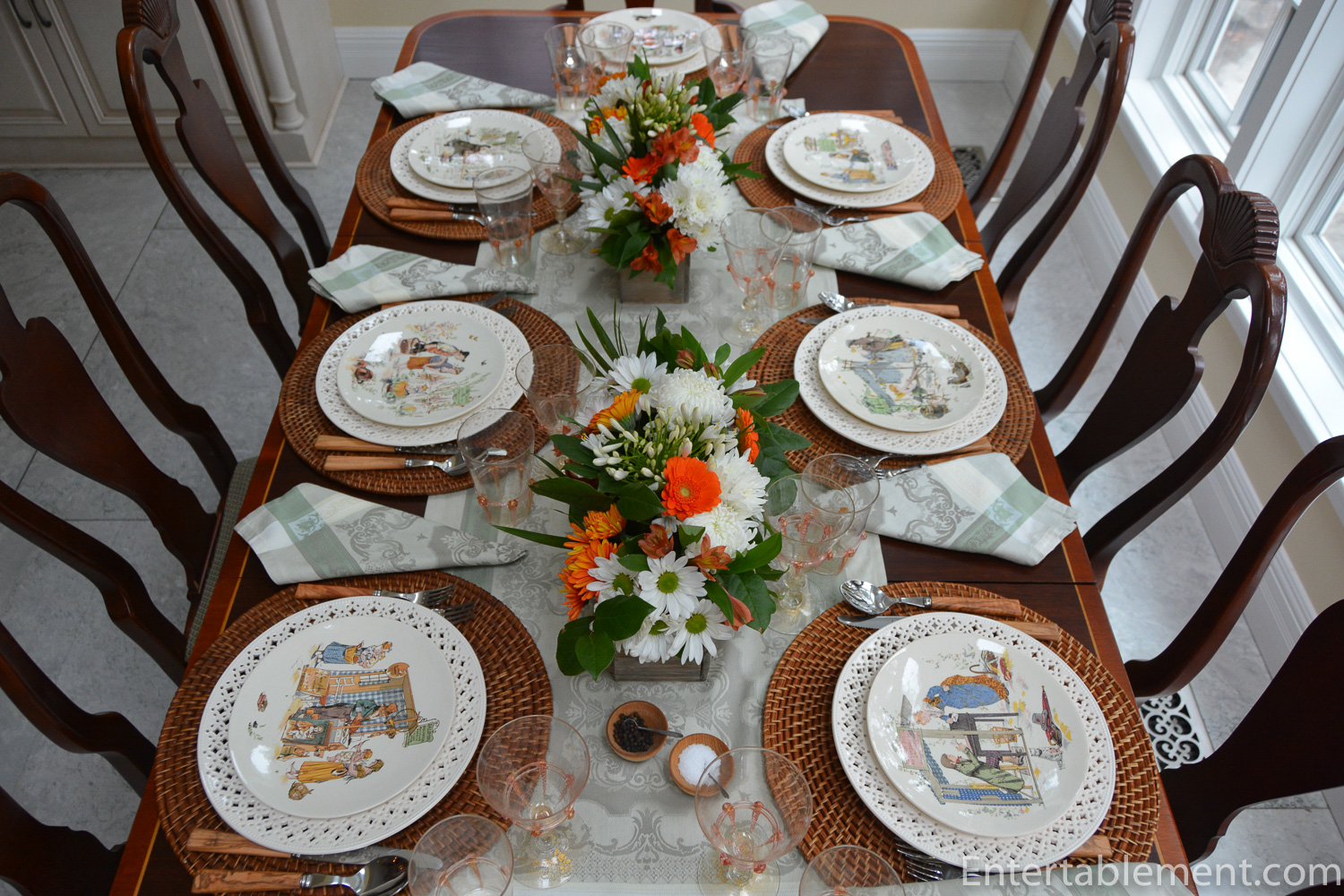 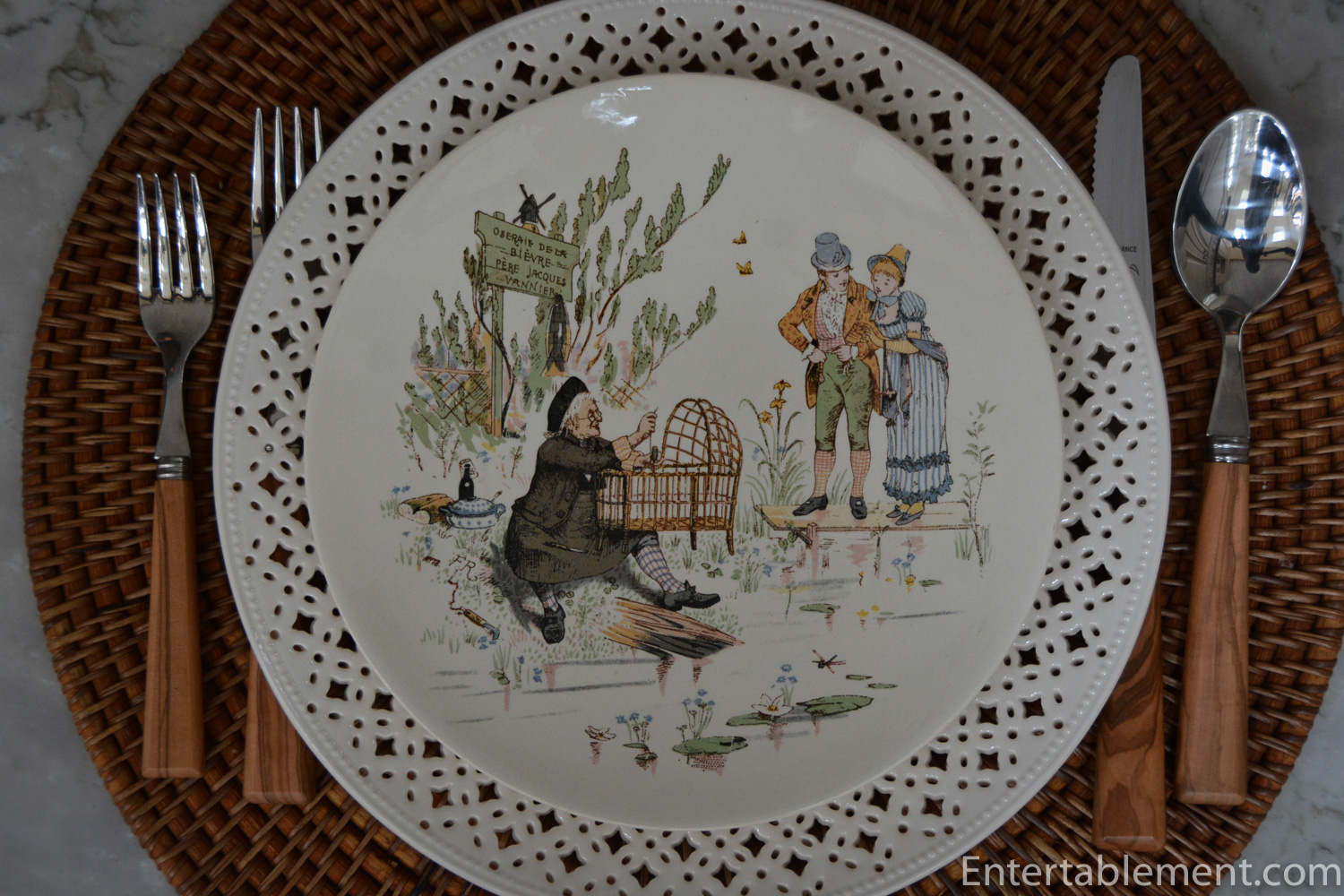 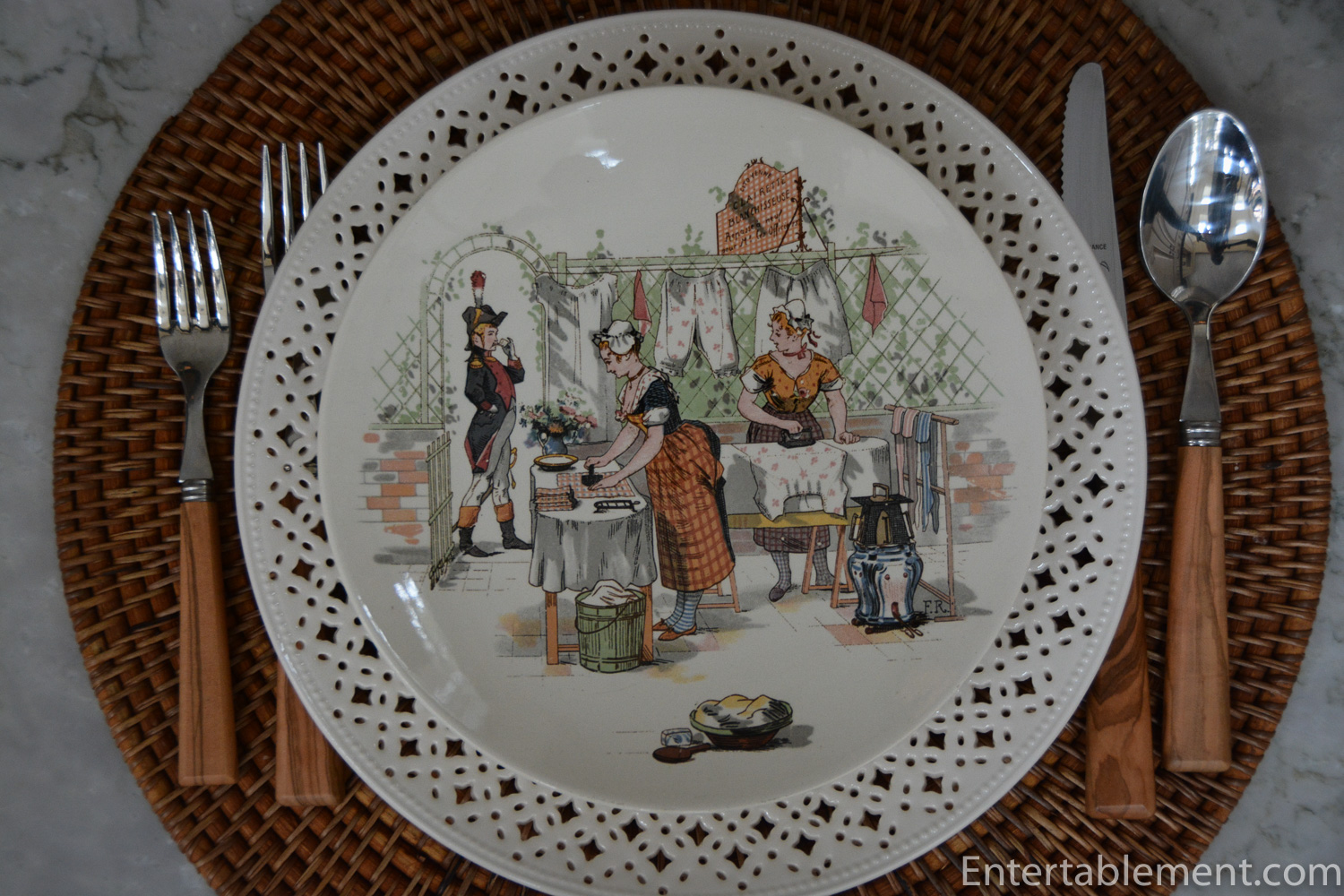 The plates are definitely cream coloured, not white. I wanted to frame them simply, but with a similar layer of detail, so went with Hartley Greens pierced creamware dinner plates (regretfully discontinued but sometimes available at Replacements) on top of rattan placemats from Pier 1 (currently discounted). 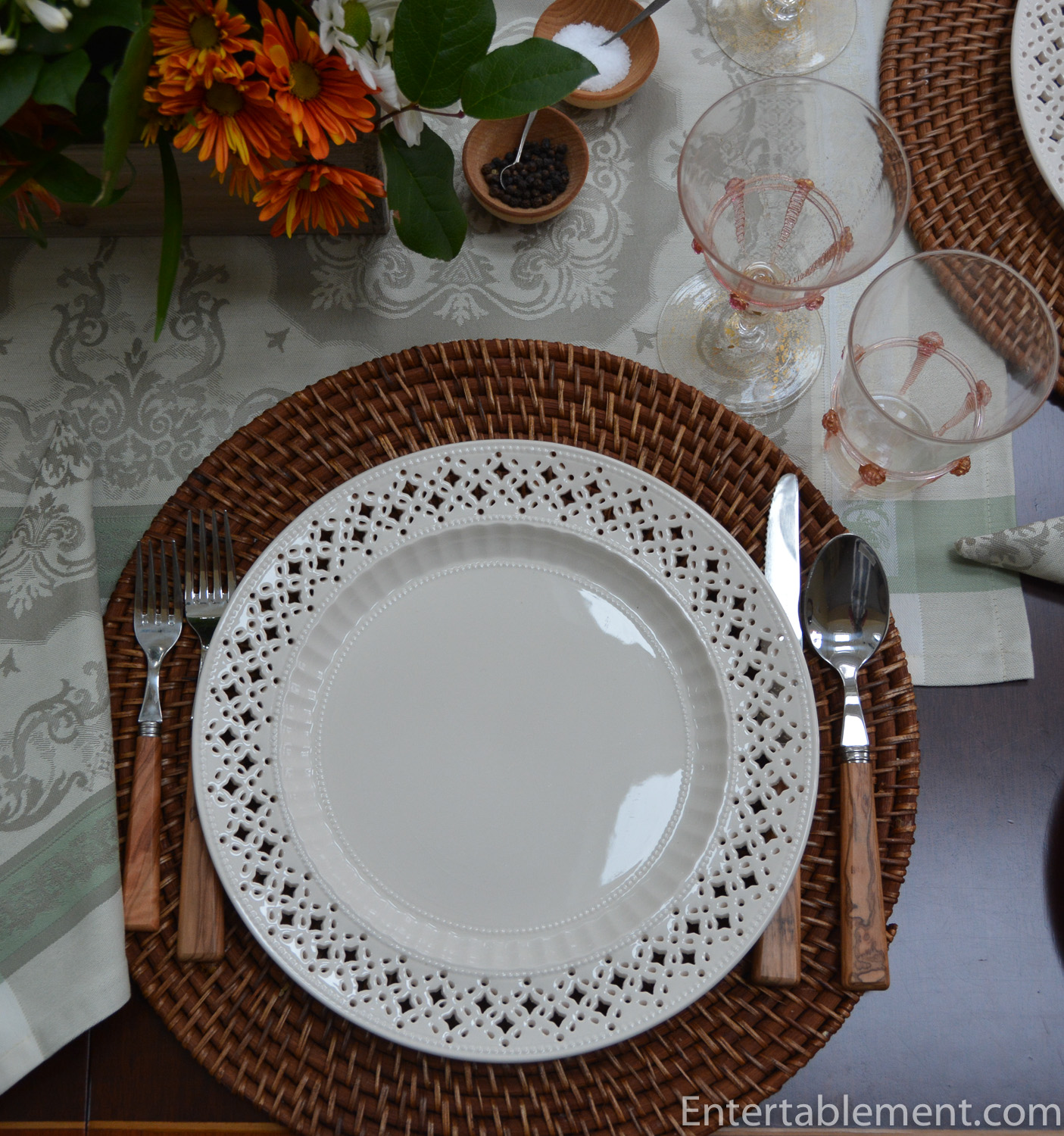 I arranged cheerful daisies and chrysanthemums from grocery store bouquets in plain wooden boxes for the centrepieces. Easy peasy. 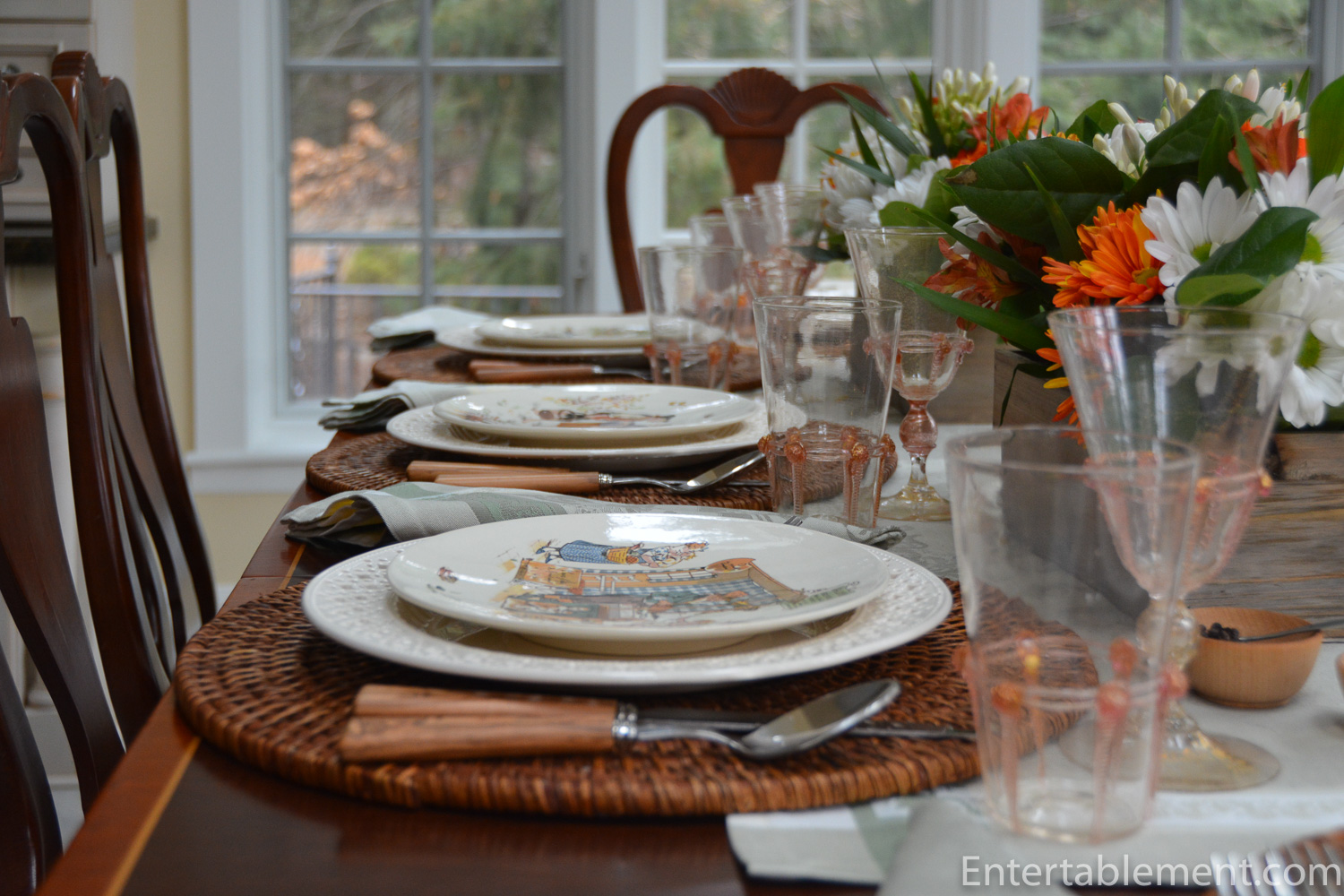 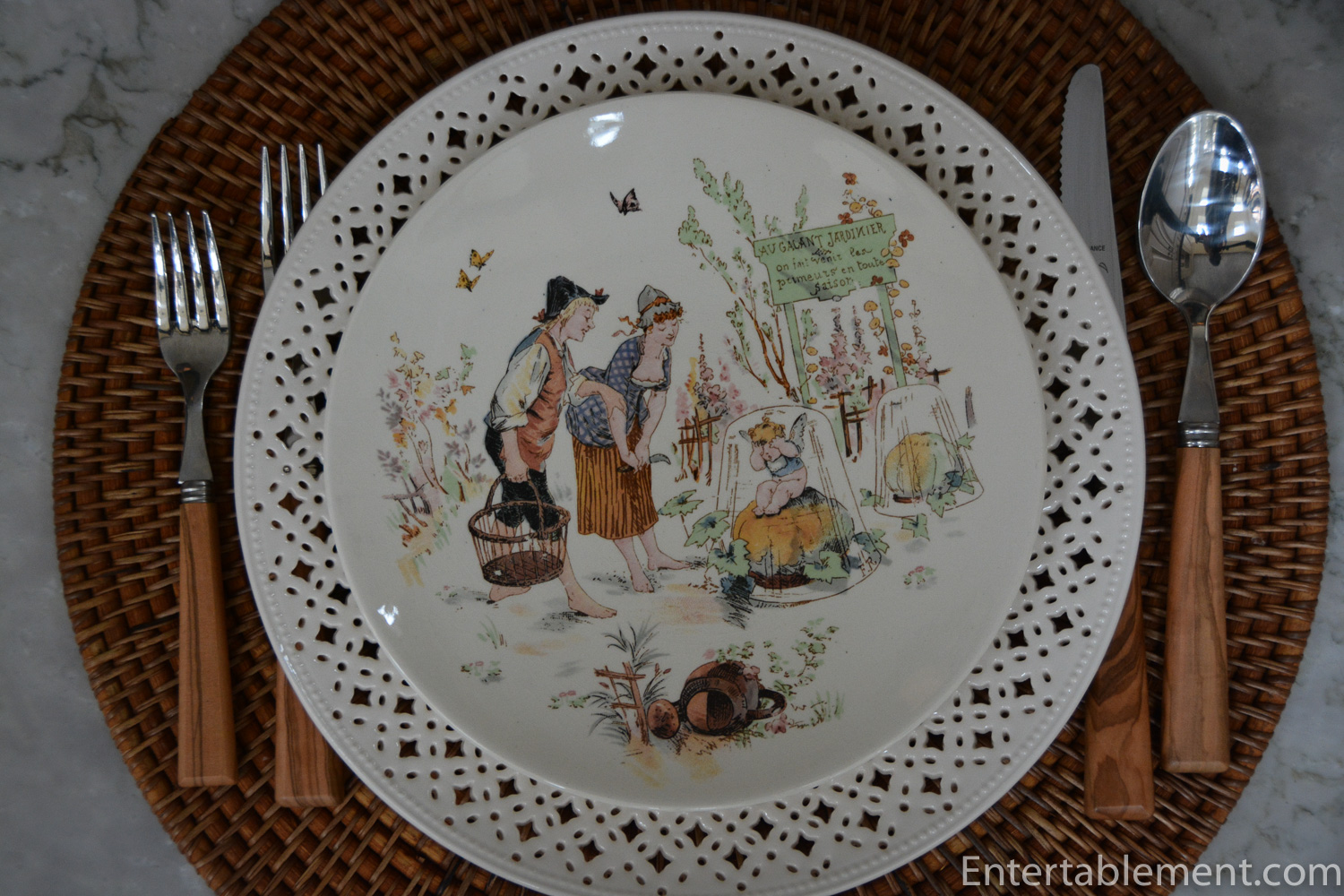 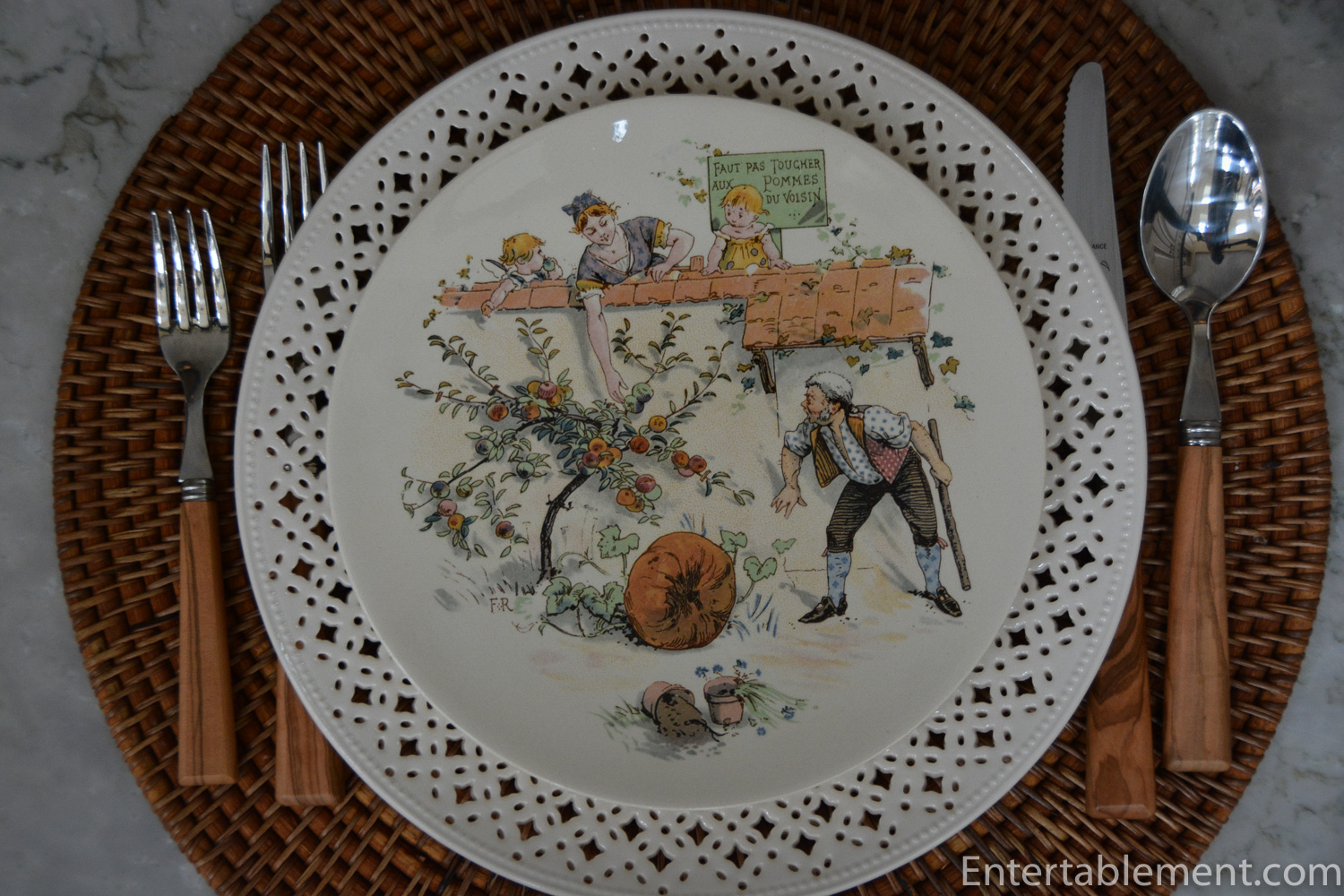 Faut Pas Toucher Aux Pommes Du Voisin- Must Not Touch The Neighbour’s Apples. Features a young mother trying to pick an apple from her neighbour’s yard 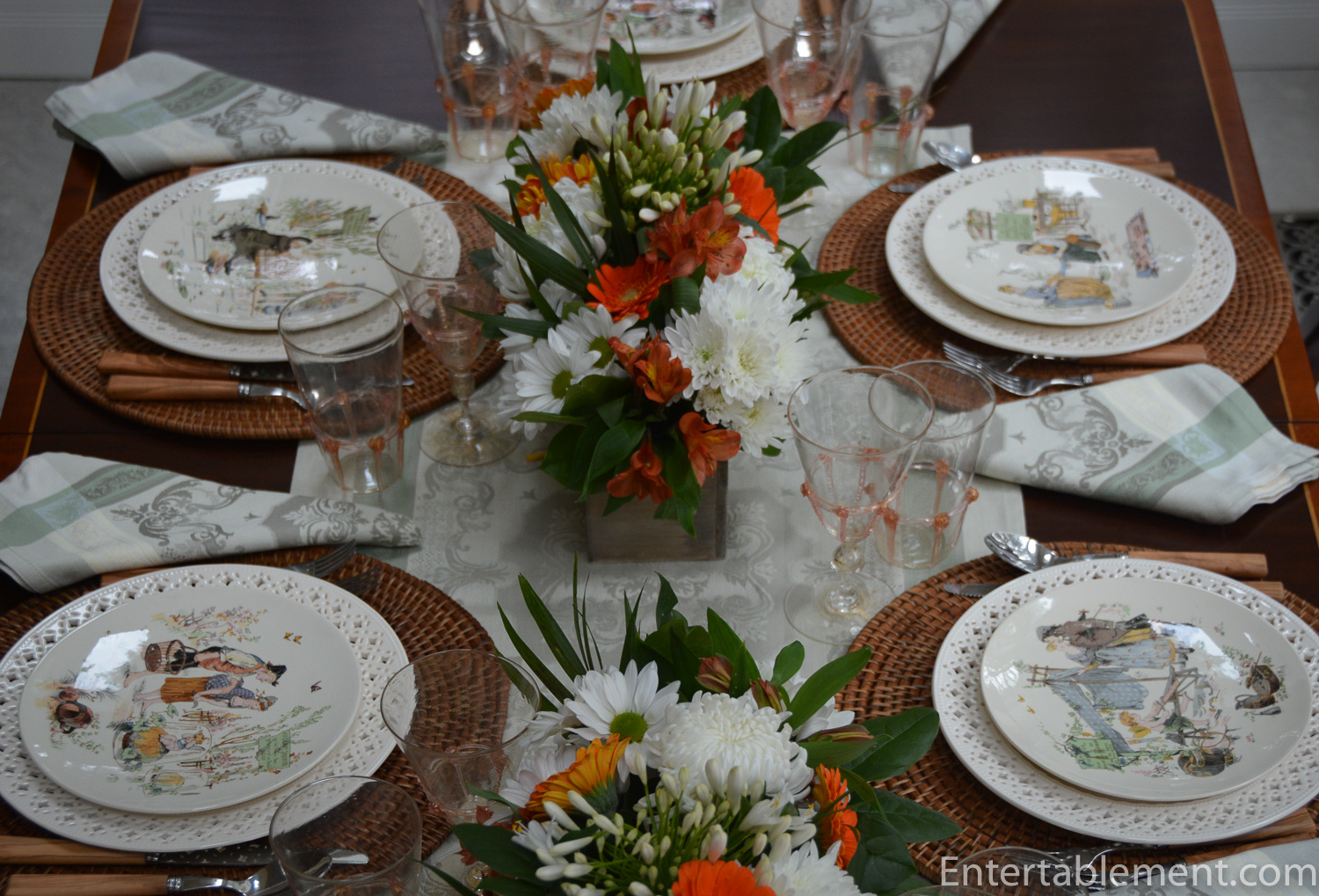 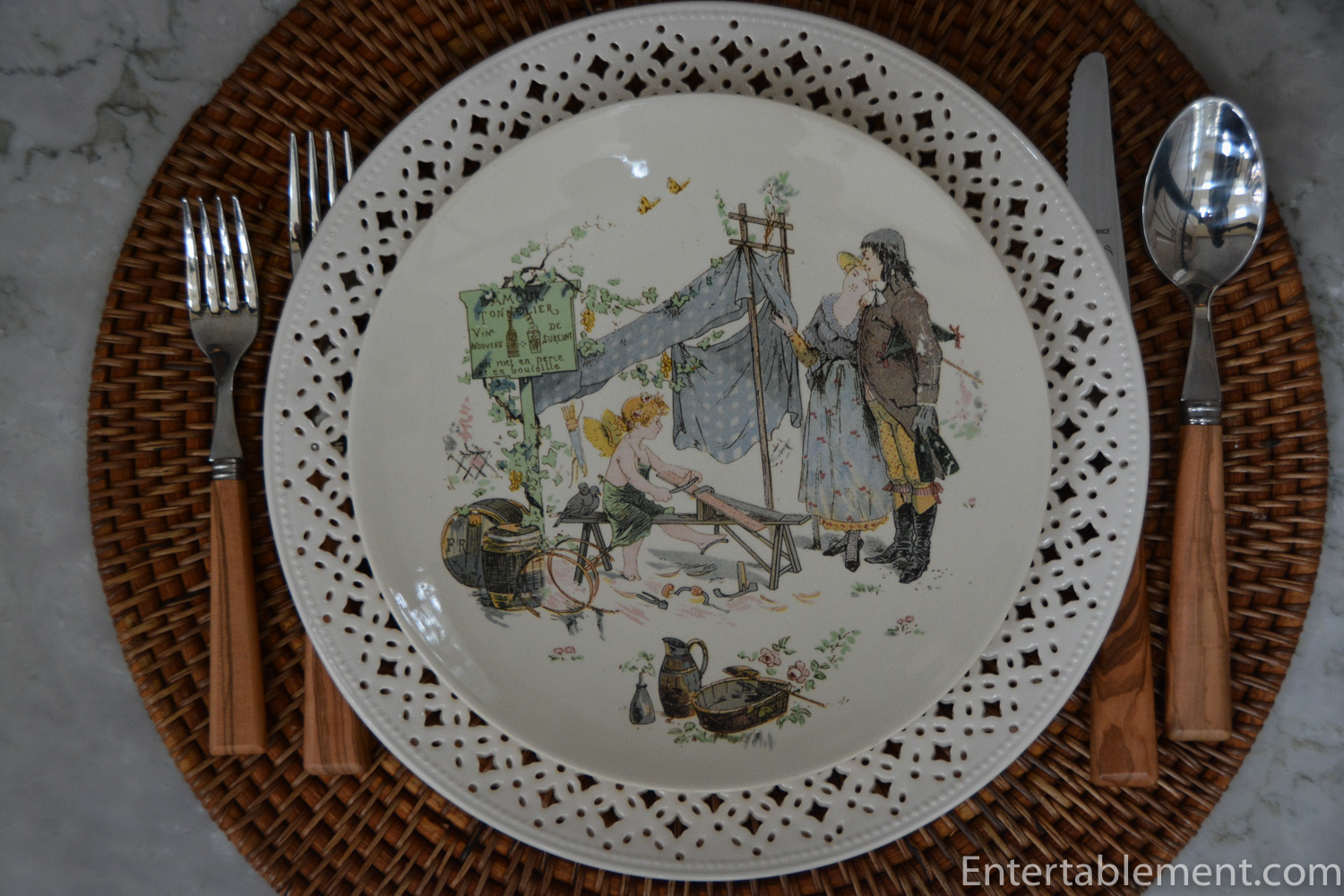 Venetian “basket glasses” picked up the melon colour in the plates; their overall shape, combined with a somewhat rough and quirky “feel” seemed to fit with the scenes. 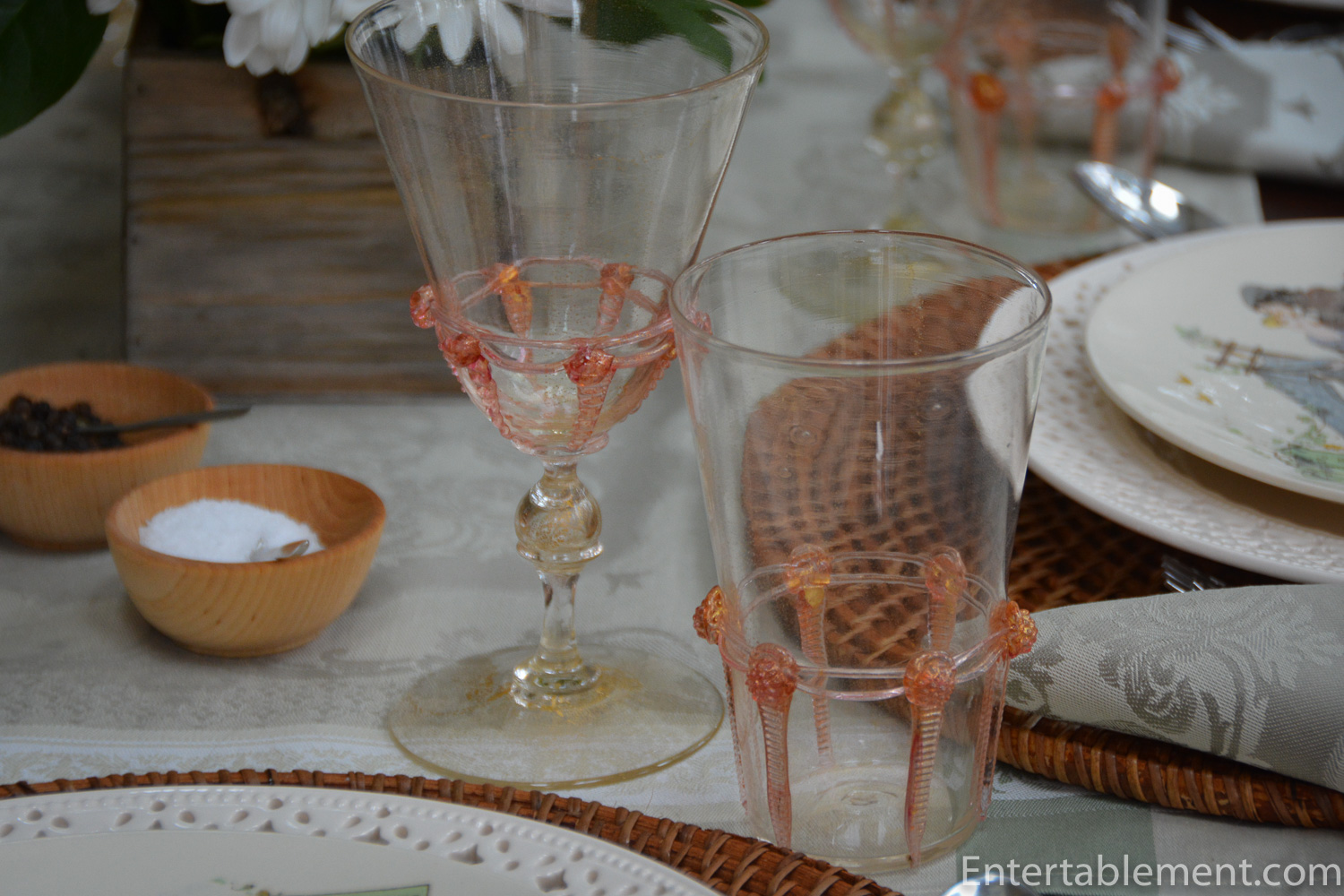 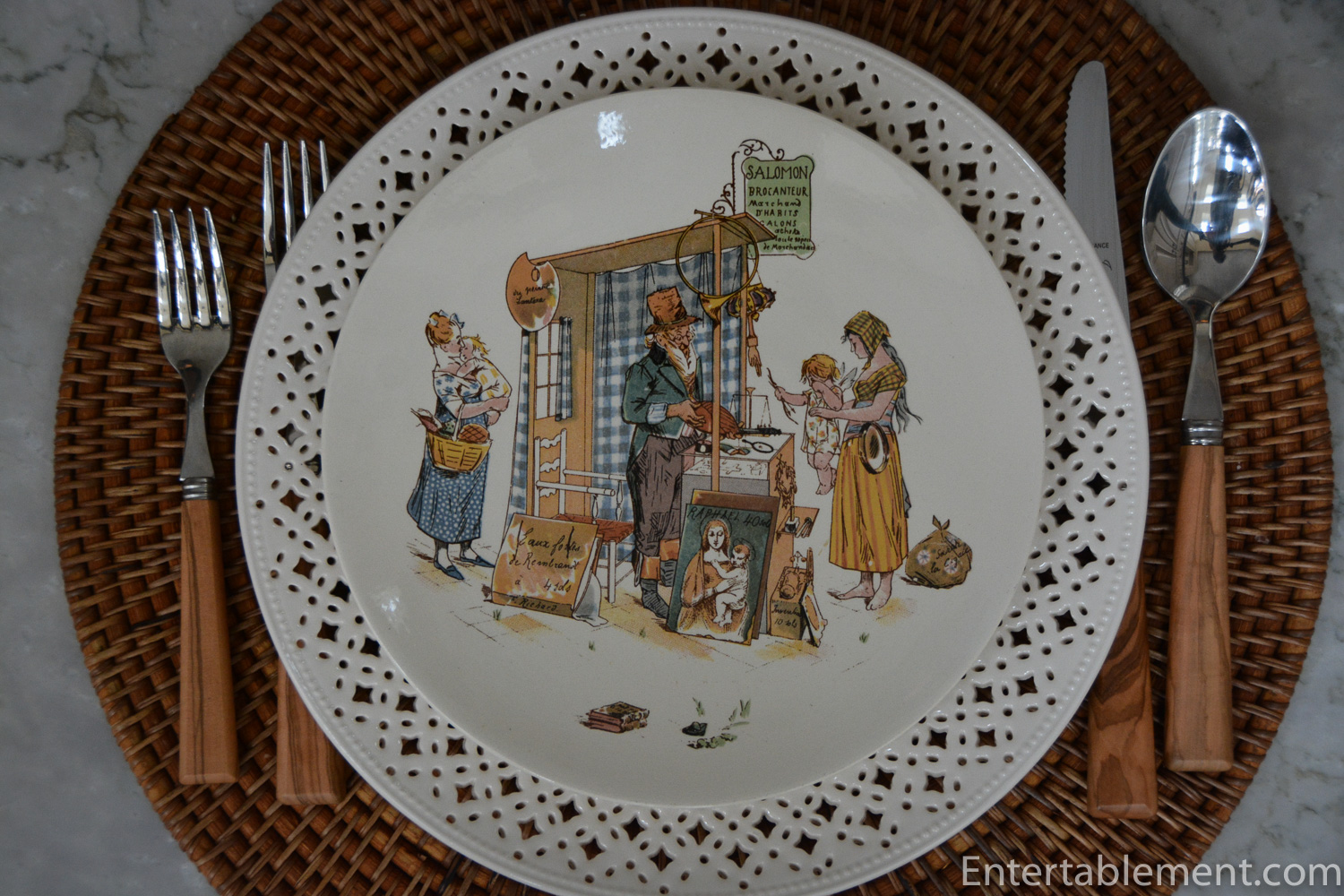 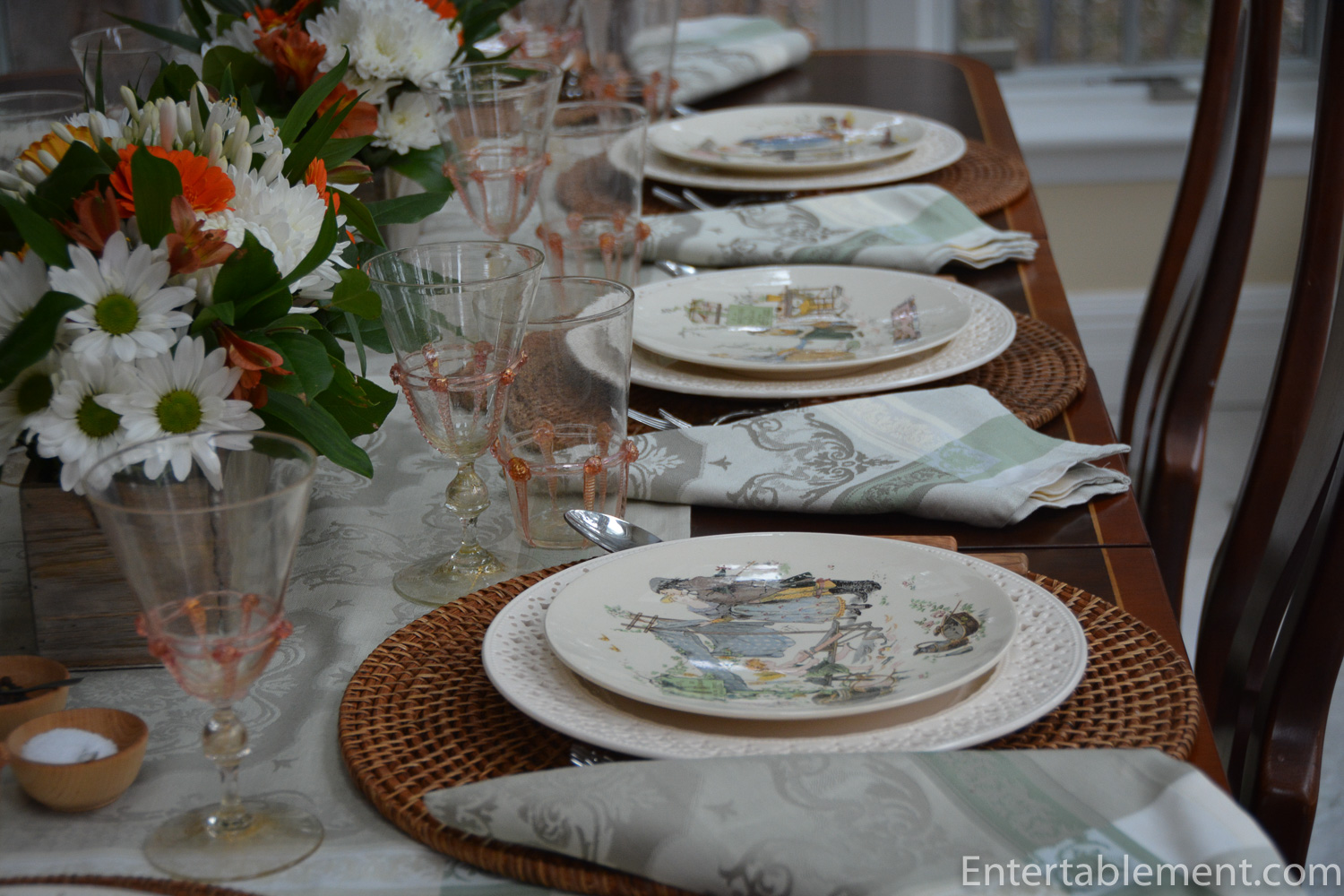 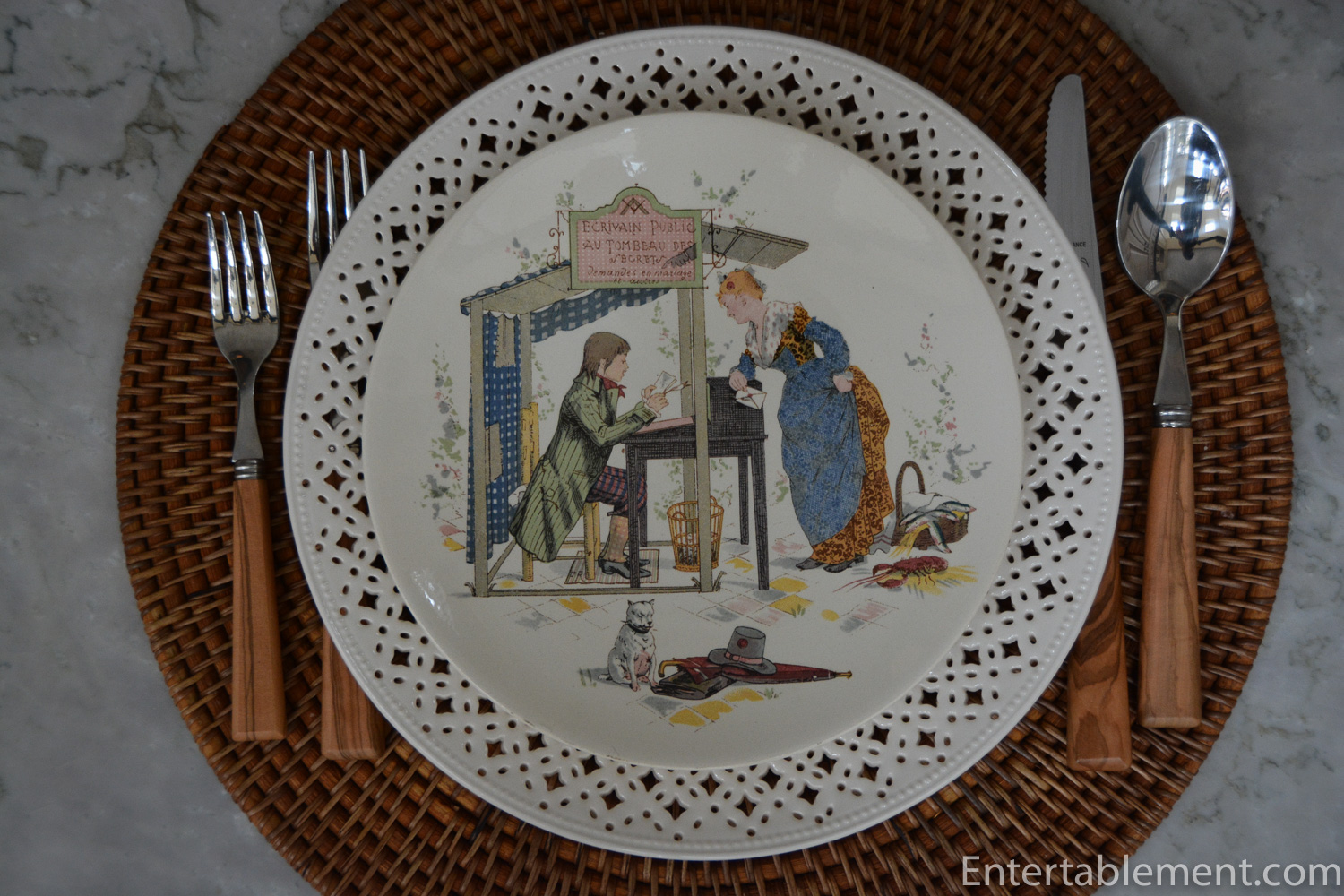 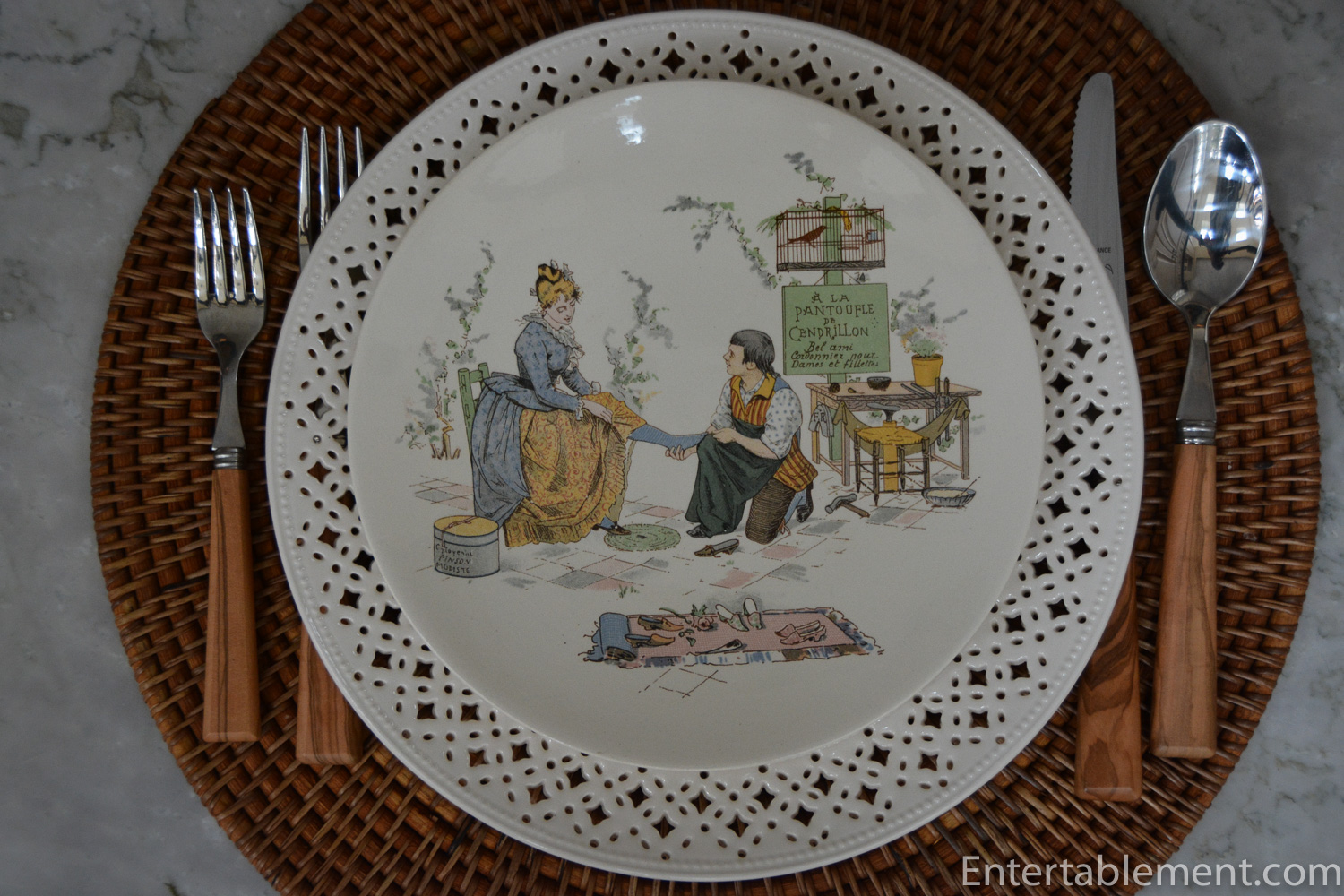 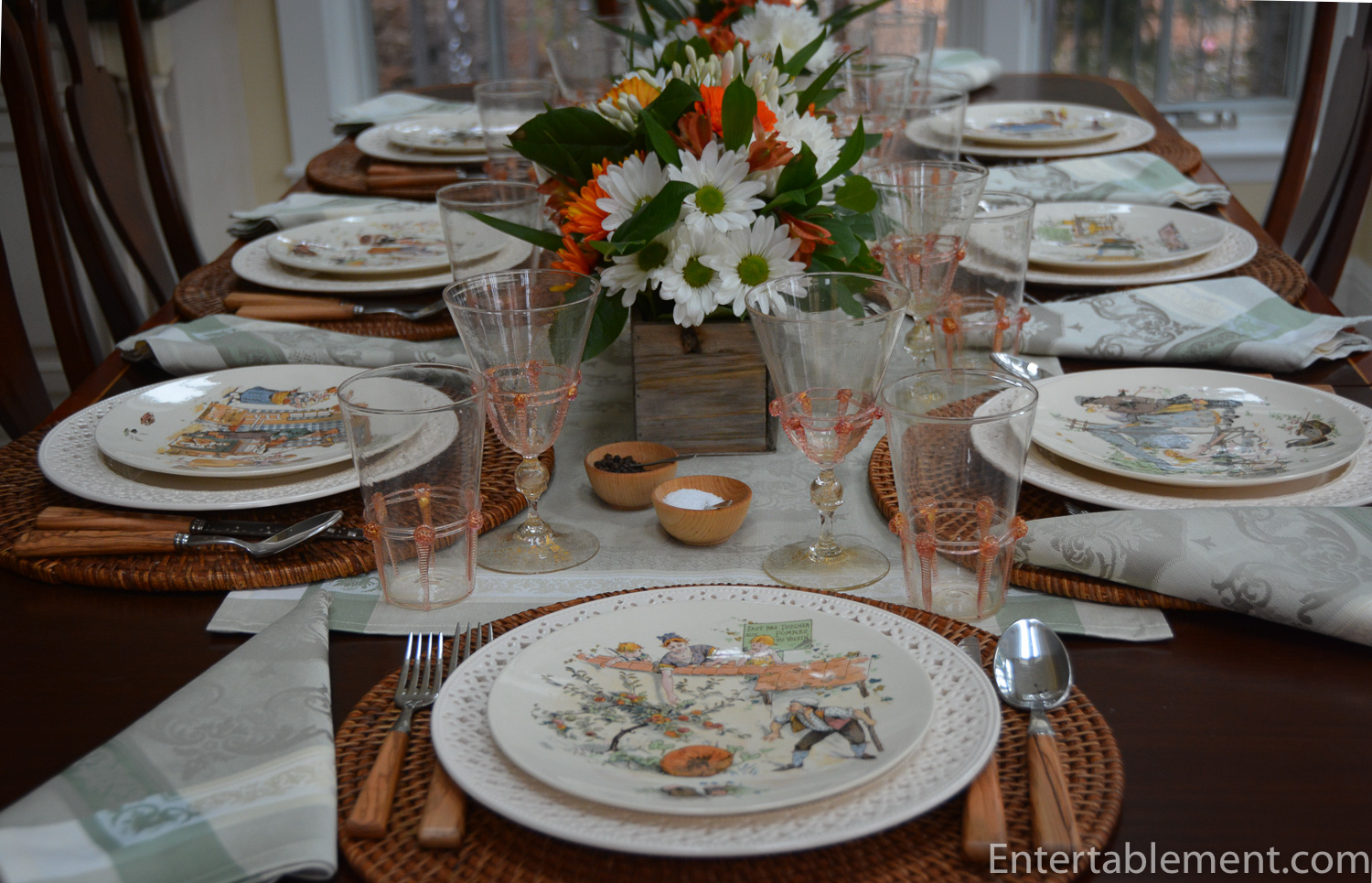 I’ve had these sage coloured Jacquard linens for donkey’s years. The runner is actually two shorter ones joined together. It was still a bit short for the table, but I went with it. 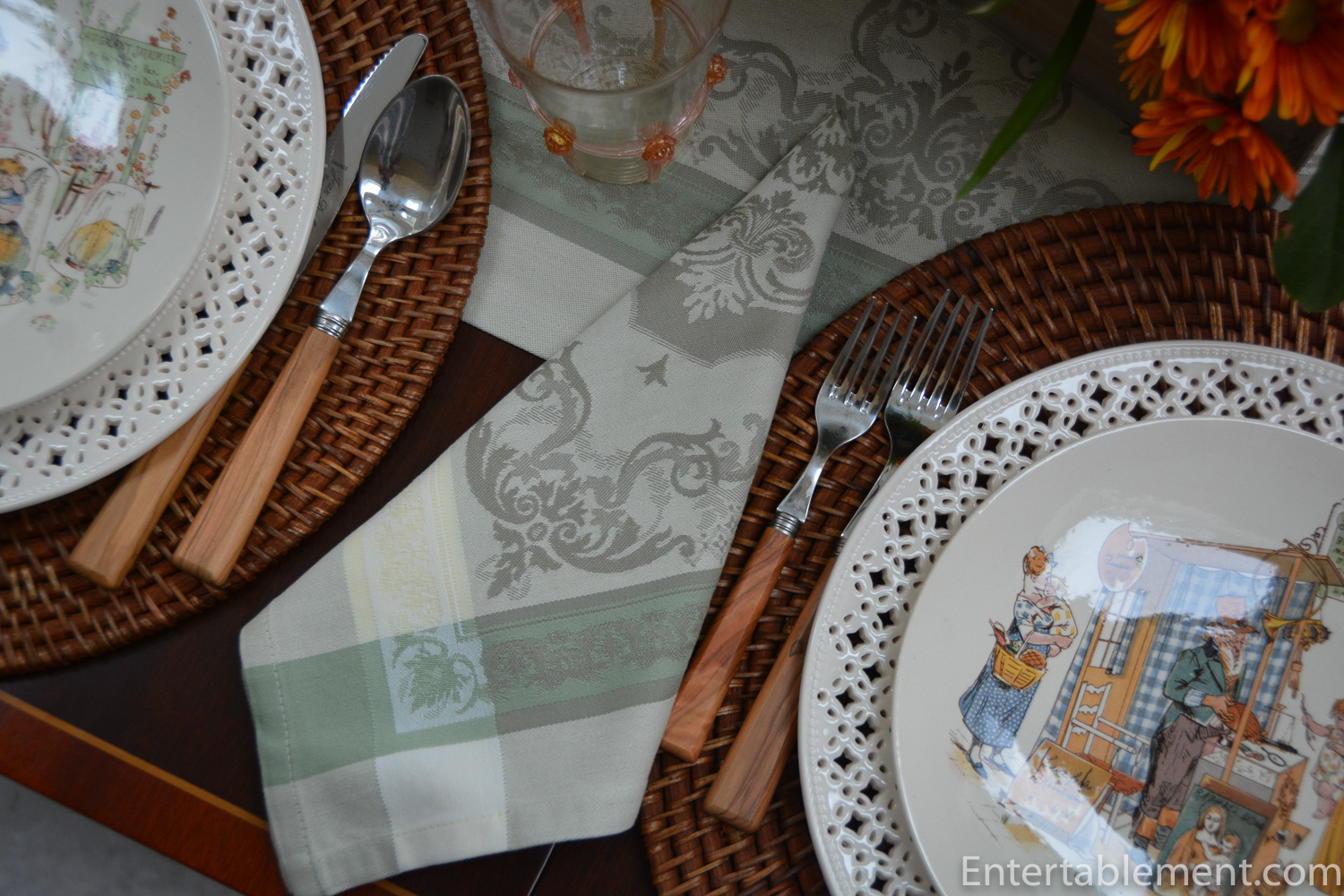 The DuBost olive wood cutlery is from Sur La Table. I’ve had it for ages, but it’s still available, and currently 30% off if anyone is interested. The little wooden bowls worked well as open salts. 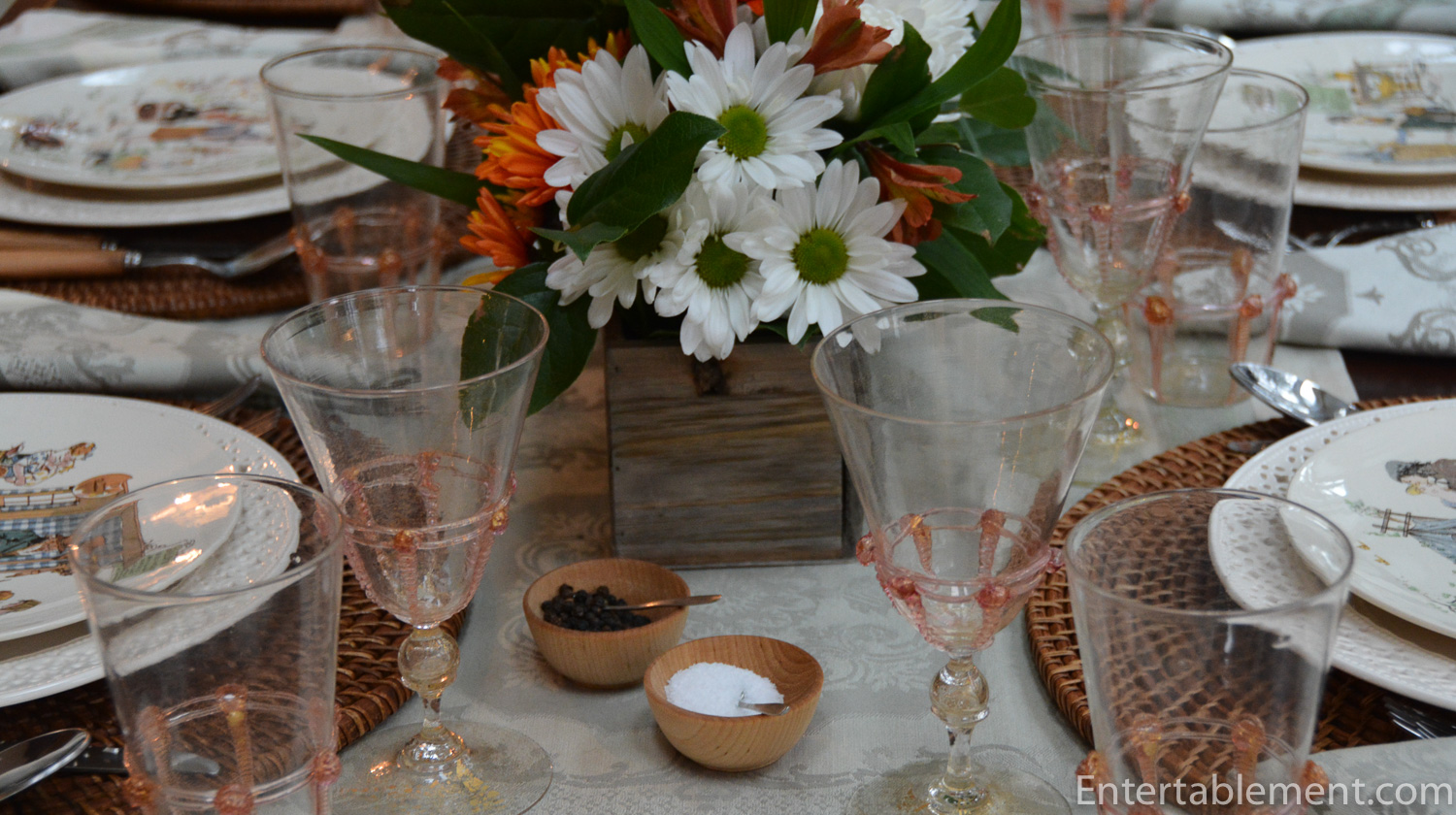 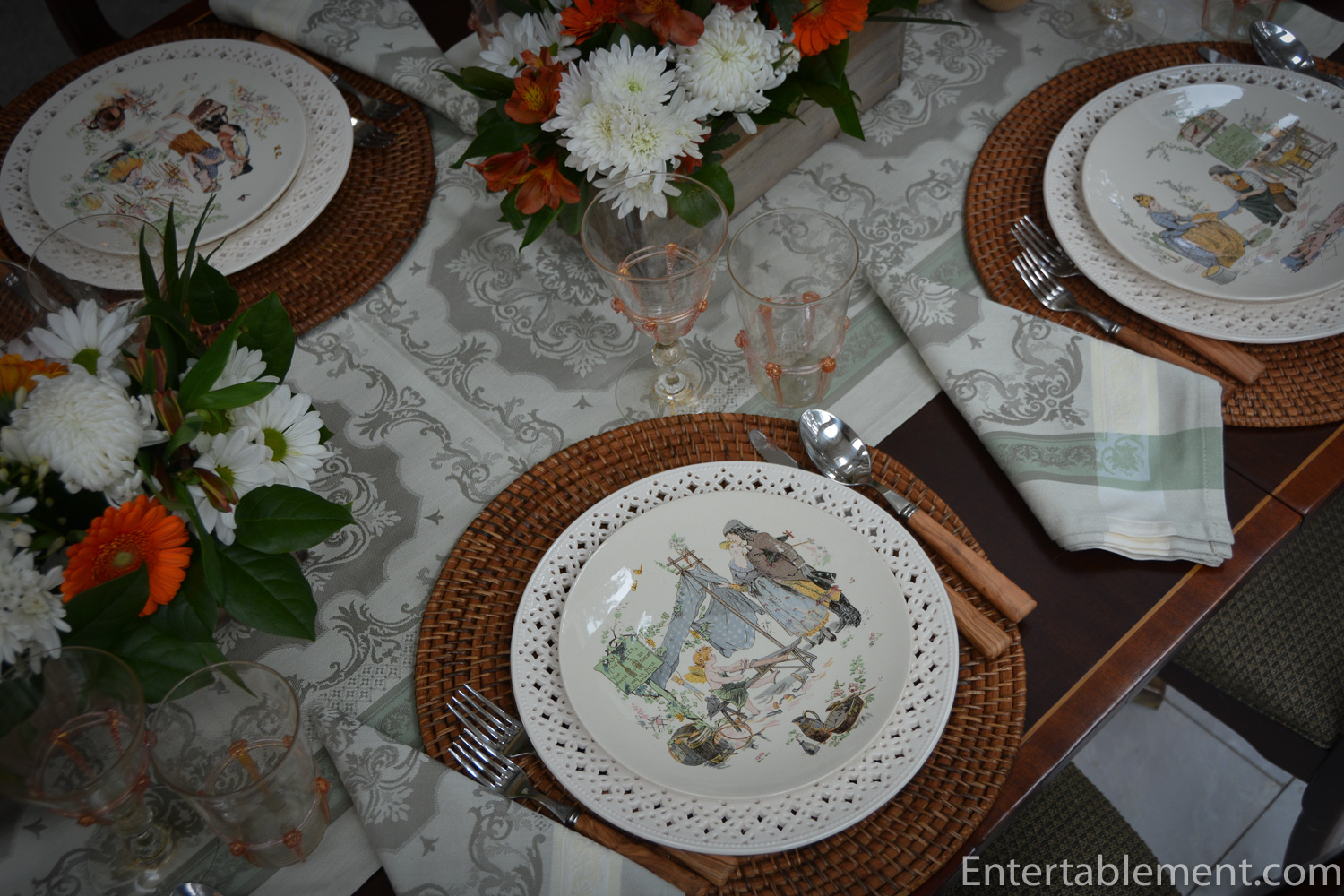 We are still wending our way around the Cotswolds. Yesterday we saw Croft Castle and Hereford Cathedral. Normally we confine ourselves to one place a day so we can really enjoy it, but the hour and a half drive into Hereford was longer than we normally undertake and the sites were fairly close together.  I will have more photos to share with you soon, and hope to have an update on Come and Dine at Highclere in the next few days. Getting close now!