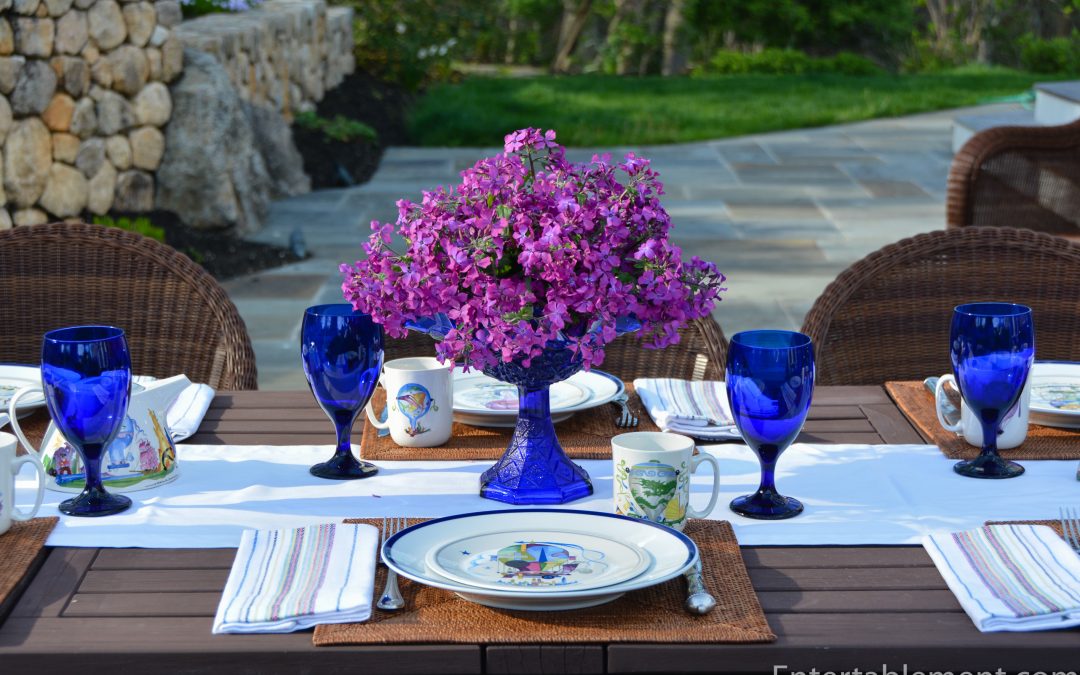 There is something intriguing about the idea of soaring high into the air, floating in a balloon. To explore the countryside from a birds’ eye view, gently and gracefully, though I suspect the reality is somewhat more uncomfortable than the romantic notion suggested by this colourful tableware by Villeroy and Boch. 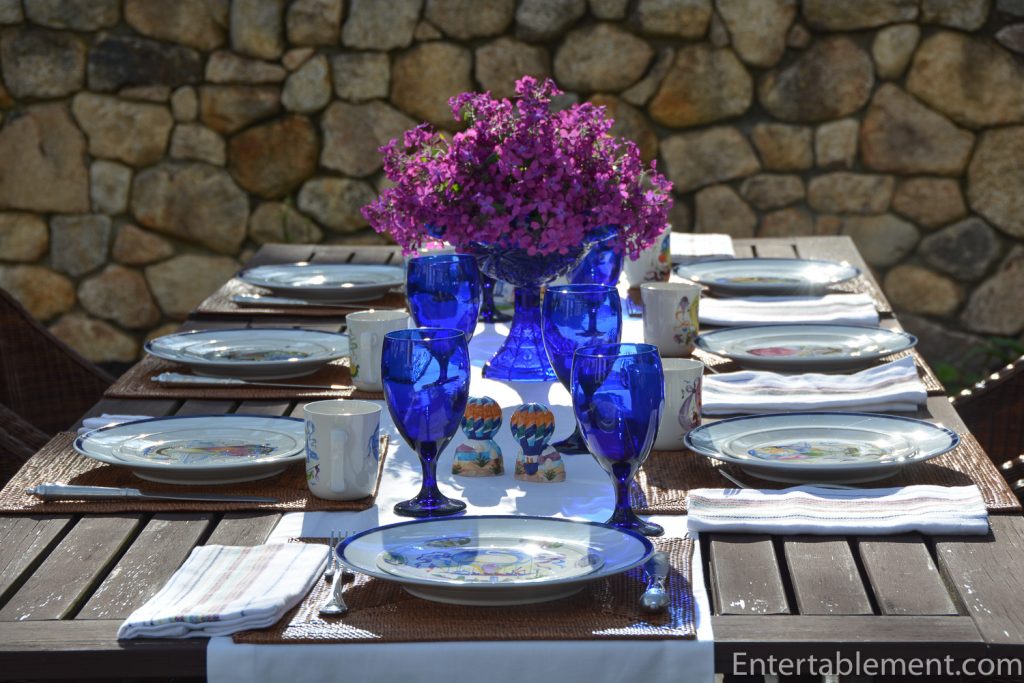 Le Ballon was produced in the mid-1980s in a plethora of pieces and illustrations by Jean-Adrien Mercier, a French illustrator. According to Stephen Ongpin Fine Art, Mercier was a prolific designer of publicity and travel posters and went on to illustrate children’s books and fairy tales over his long career; he was born in 1899 in Angers, France and died in Paris in 1995. 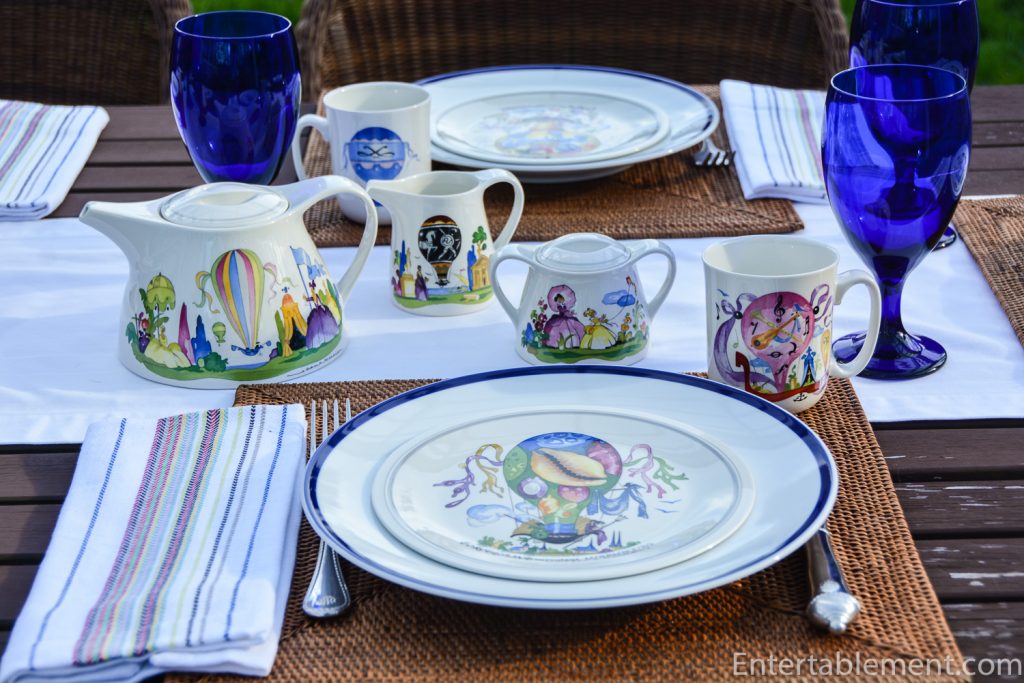 There were six different plates at the outset: Copenhagen, London, Luxembourg, Venice, New York & Cologne. Two American cities, Boston and San Francisco joined the mix at a later date. Though Paris is noticeably absent from the plates, I believe it is represented in some of the serving pieces. 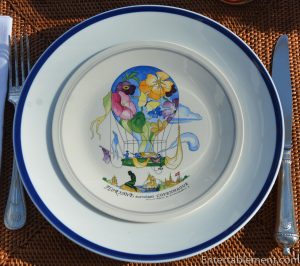 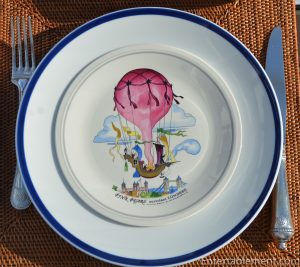 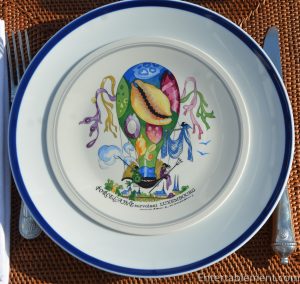 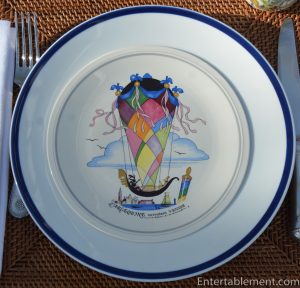 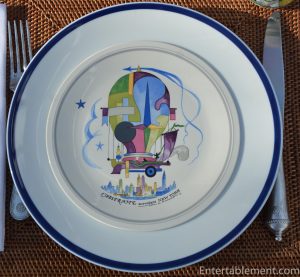 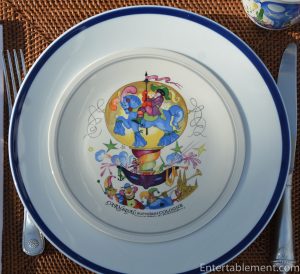 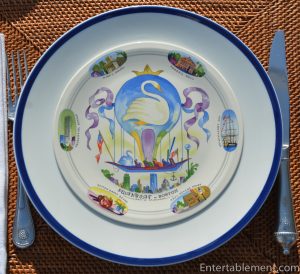 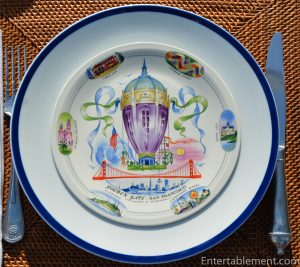 The clear cobalt blue served as the call to action for the table setting; I used cobalt footed water glasses and Brasserie Blue bistro plates, a nod to the French heritage of the salad plates. 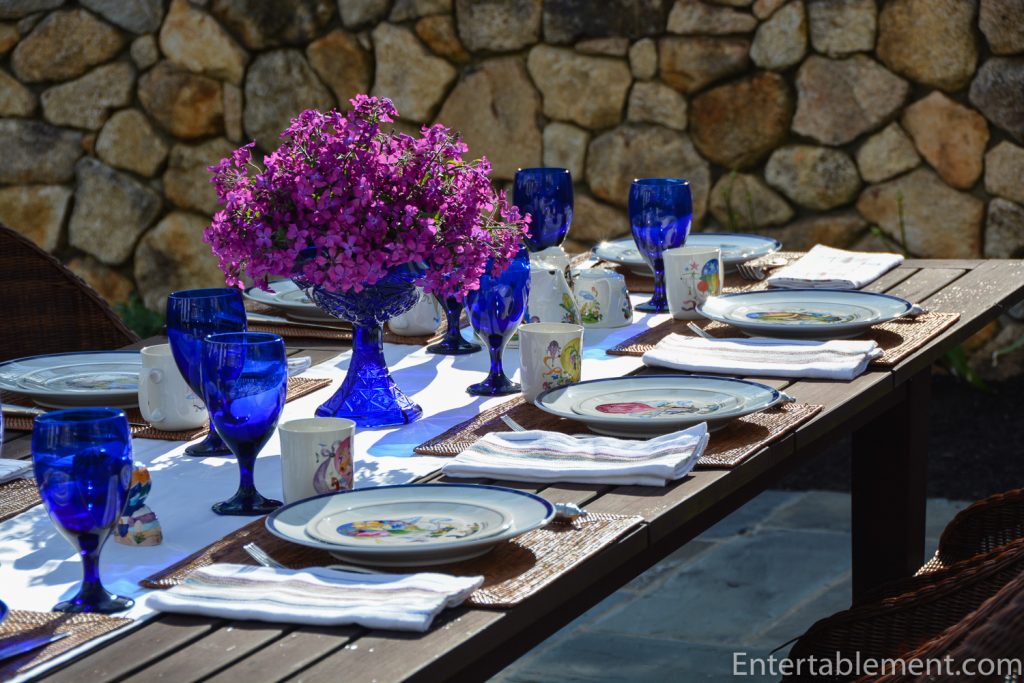 The prominent magenta was a bit trickier to incorporate, but happily some Dame’s Rocket, a cheerful weed, obliged and graced the cobalt Mosser compote (an e-Bay find). 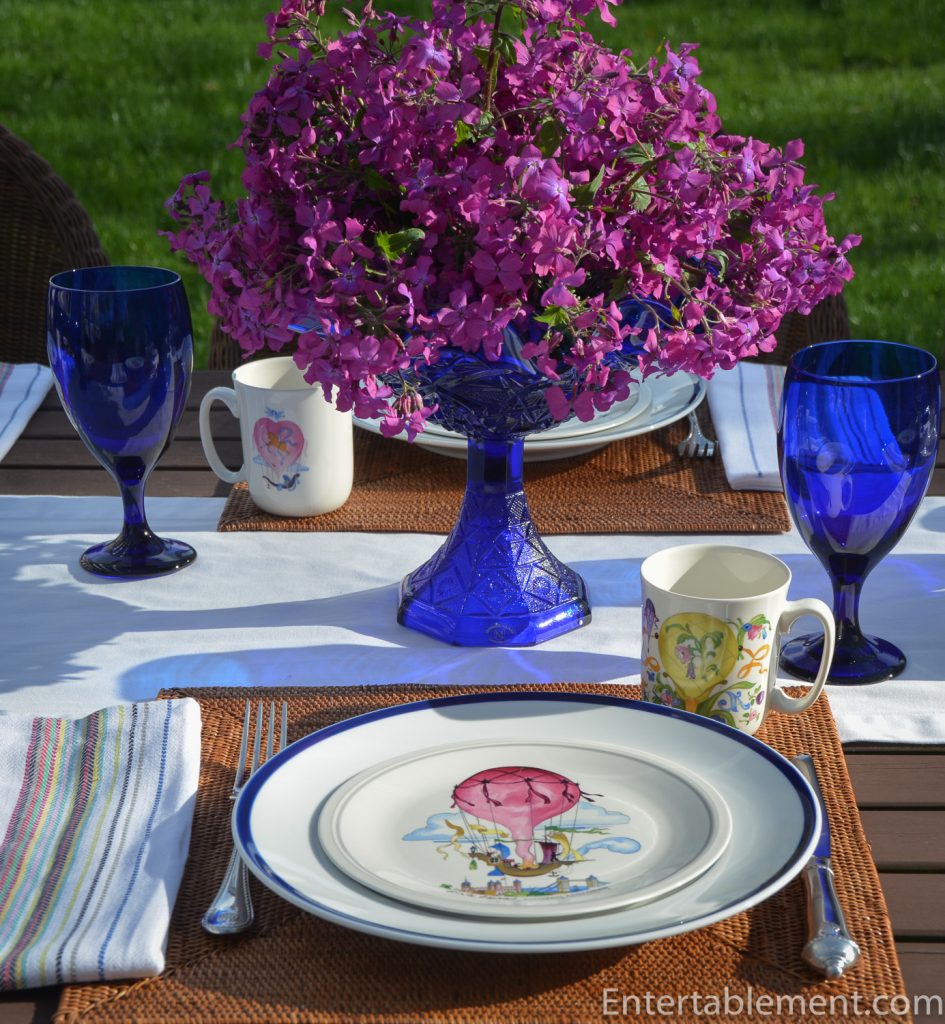 With so many colours in Le Ballon, I went with multi-coloured striped napkins (discontinued) from Amazon. That way no one felt left out! 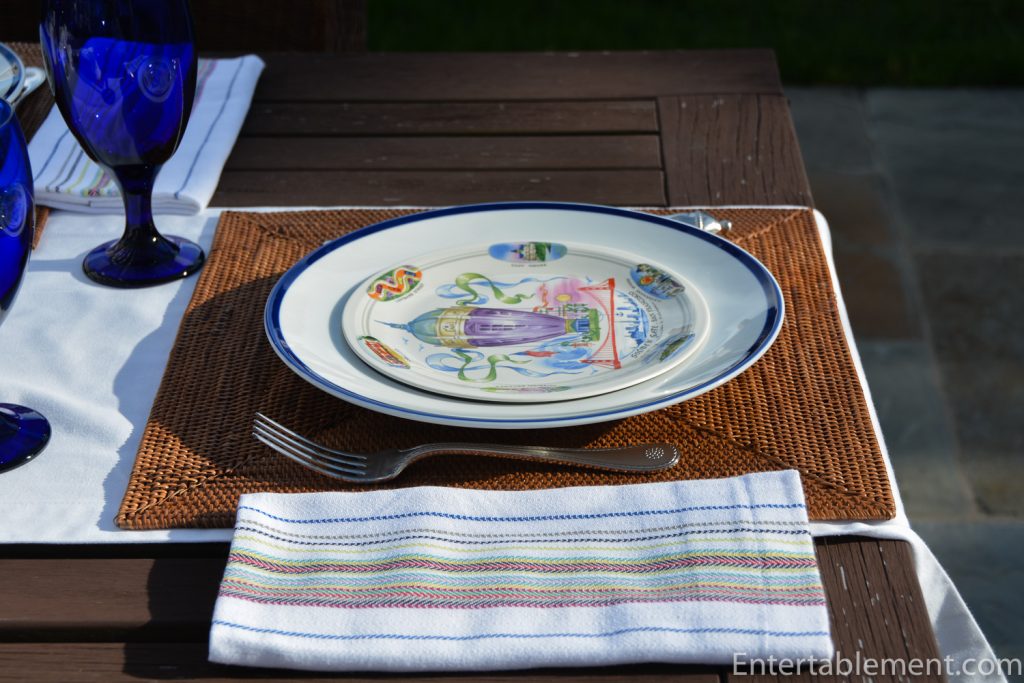 The tea accoutrements were irresistible, and sport even more illustrations. 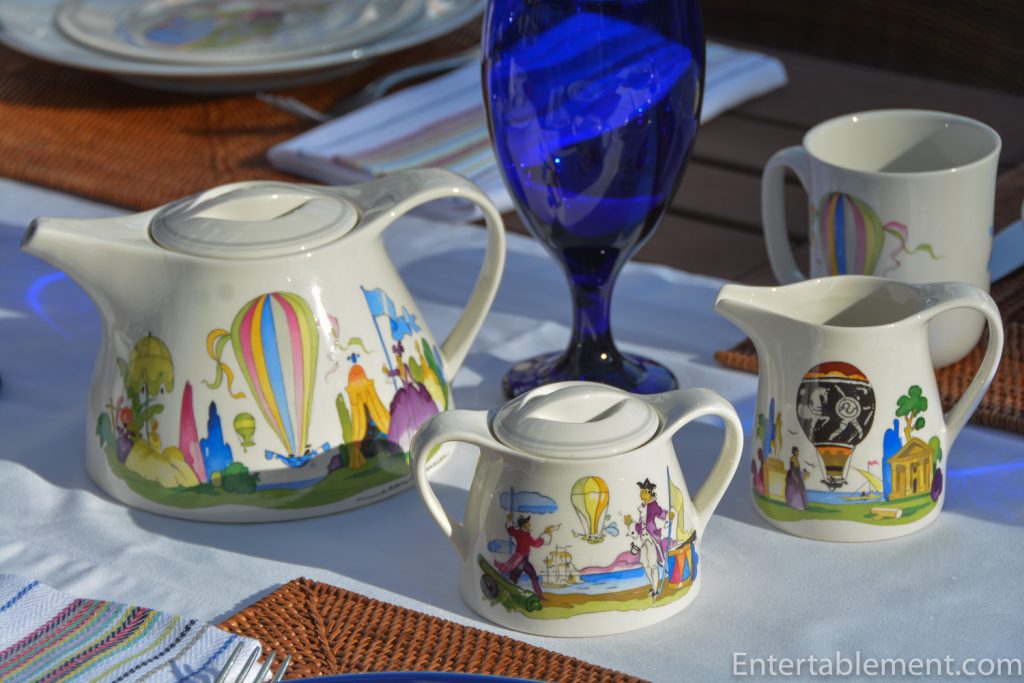 Six mugs, all with different patterns front and back. 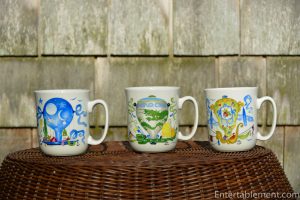 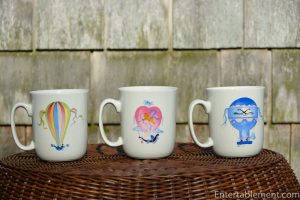 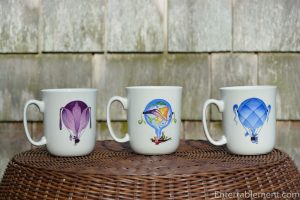 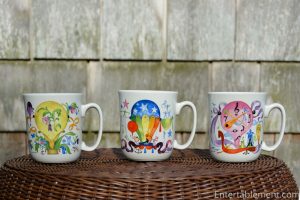 The squat little teapot is a charmer, alongside its matching creamer and sugar. How adorable are those? I can see the fairytale influence in the illustrations and suspect these were done later in the artist’s career. 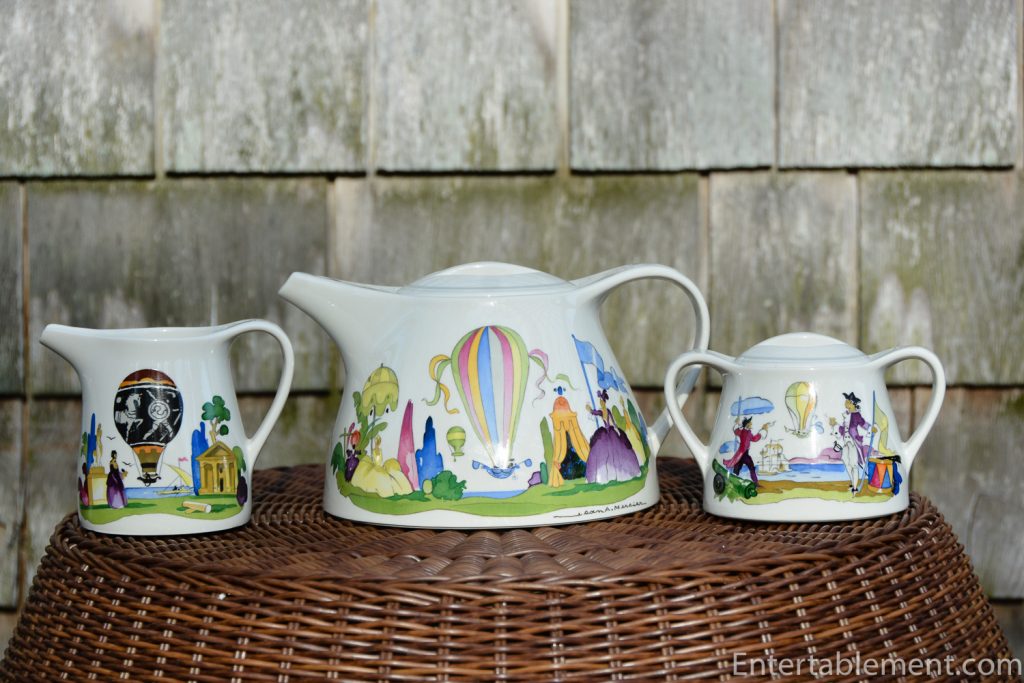 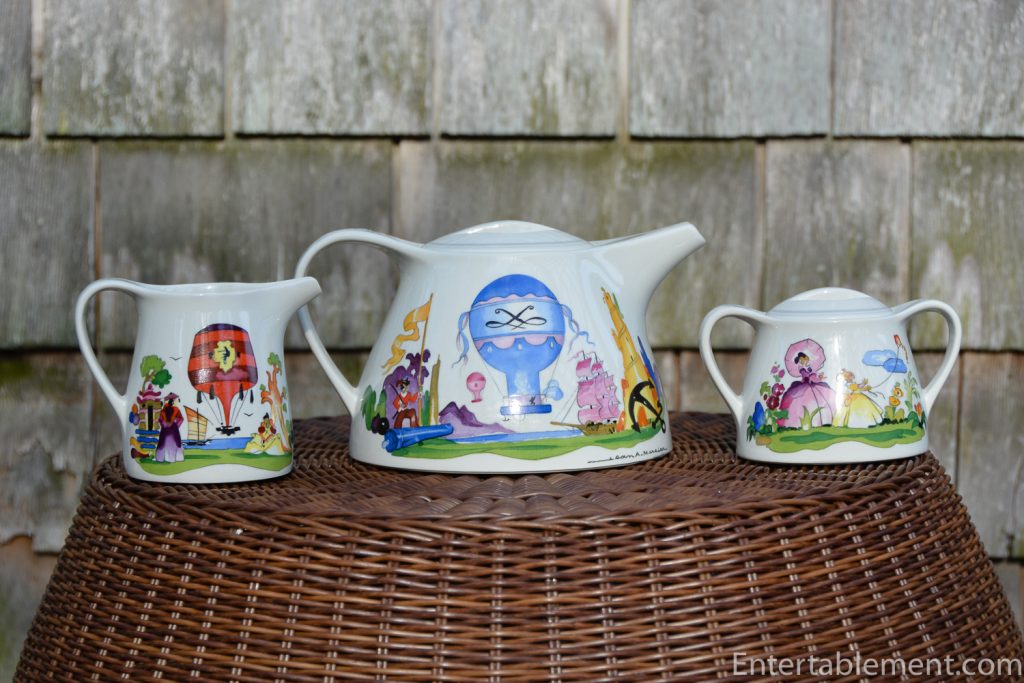 It was a bright and sunny day when I set the table, perfect for a balloon ride. 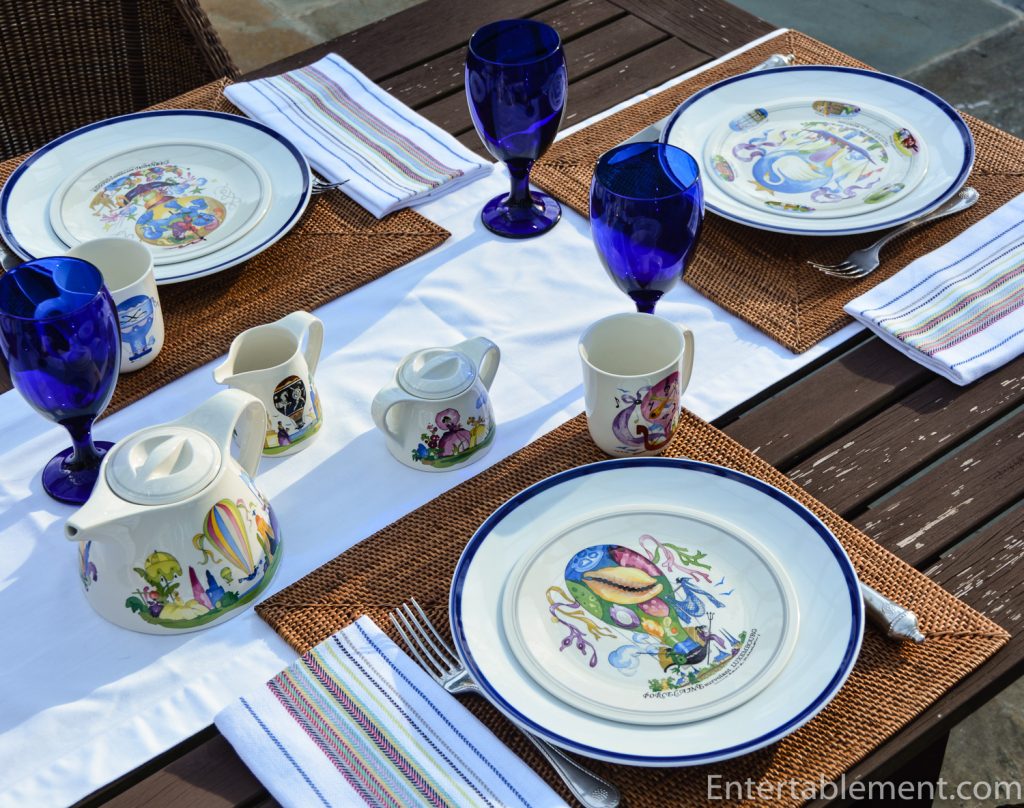 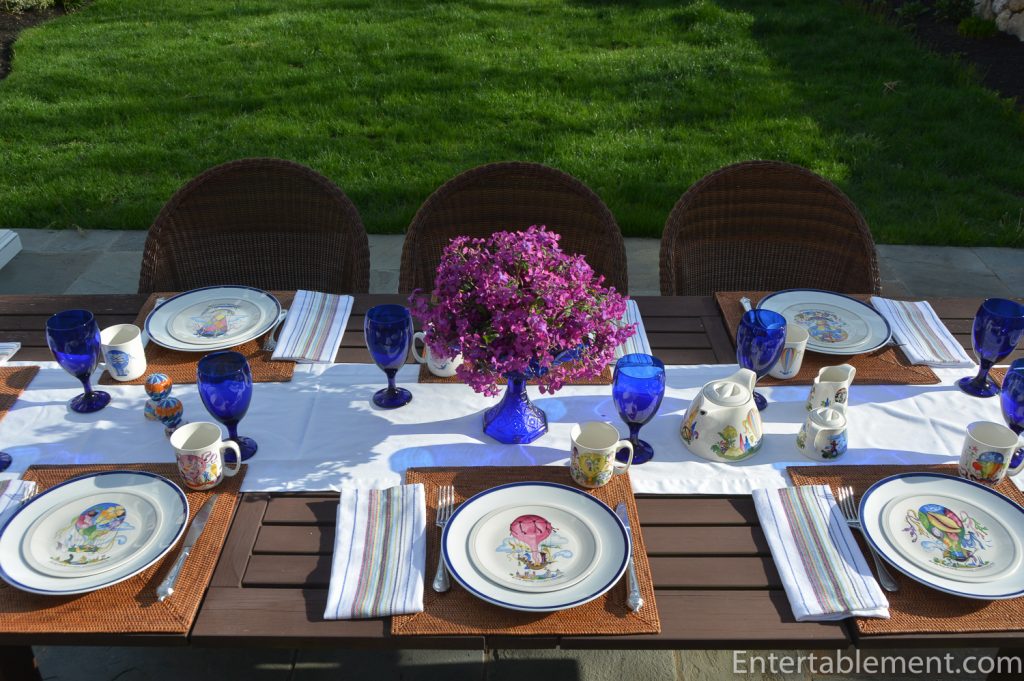 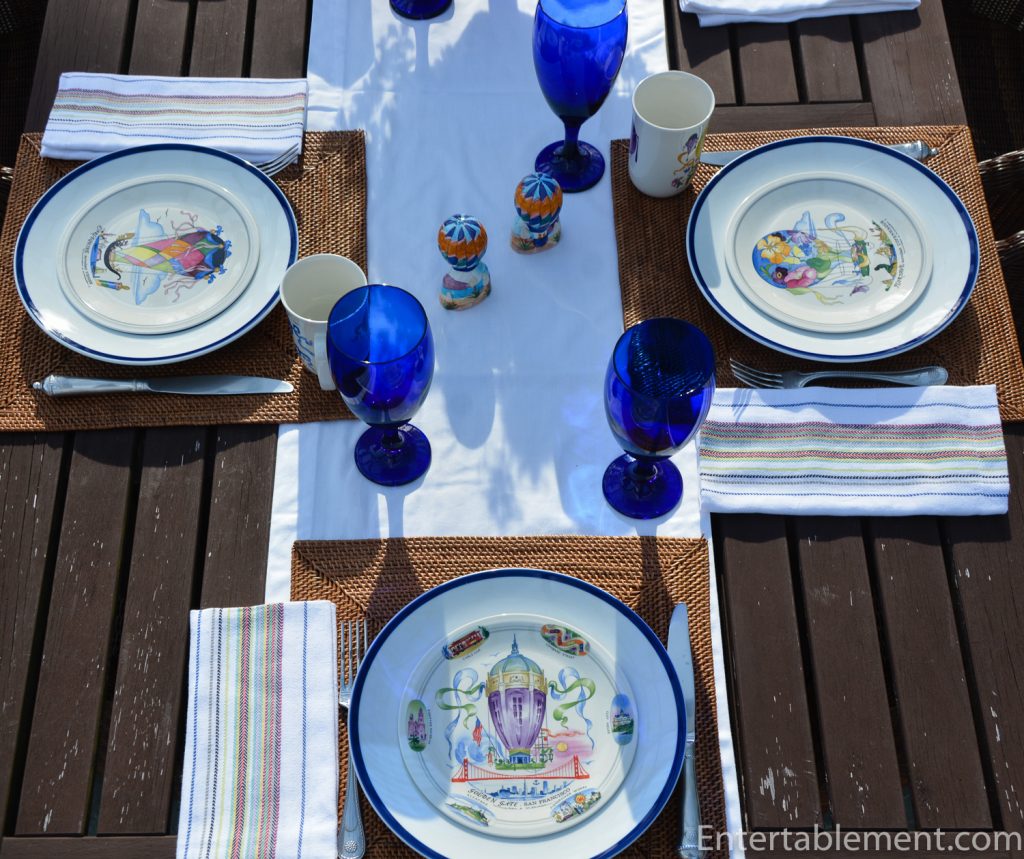 Couldn’t leave out these little guys; they floated in from eBay. 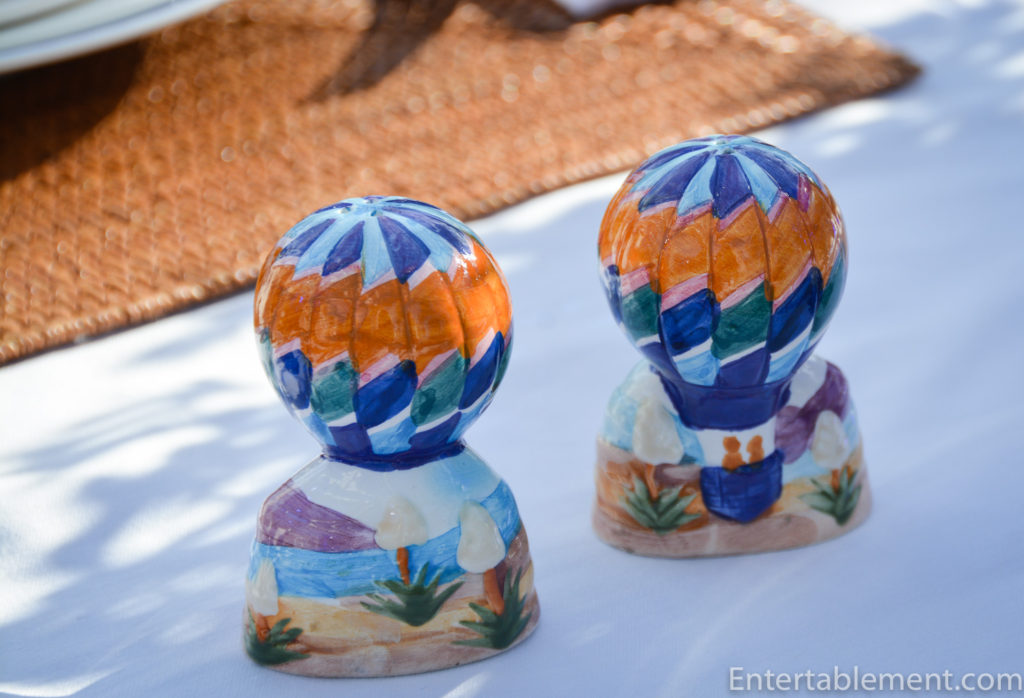 The flatware is Berry and Thread by Juliska and the Tava Square Chargers in Honey are from Pottery Barn, both still available. 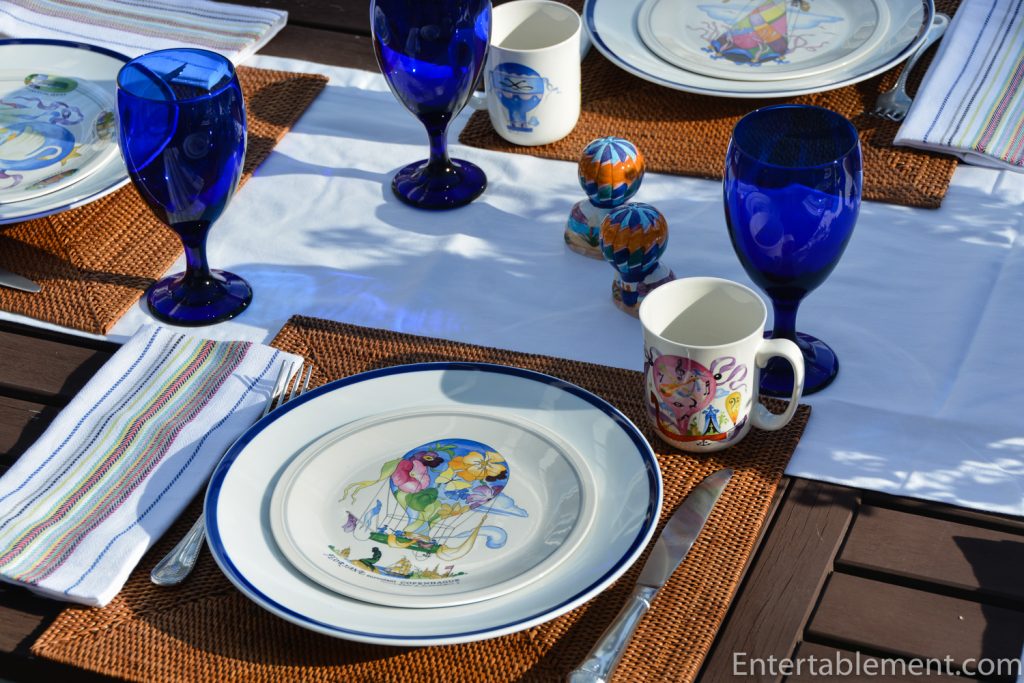 I hope you’ve enjoyed our trip Up, Up and Away. 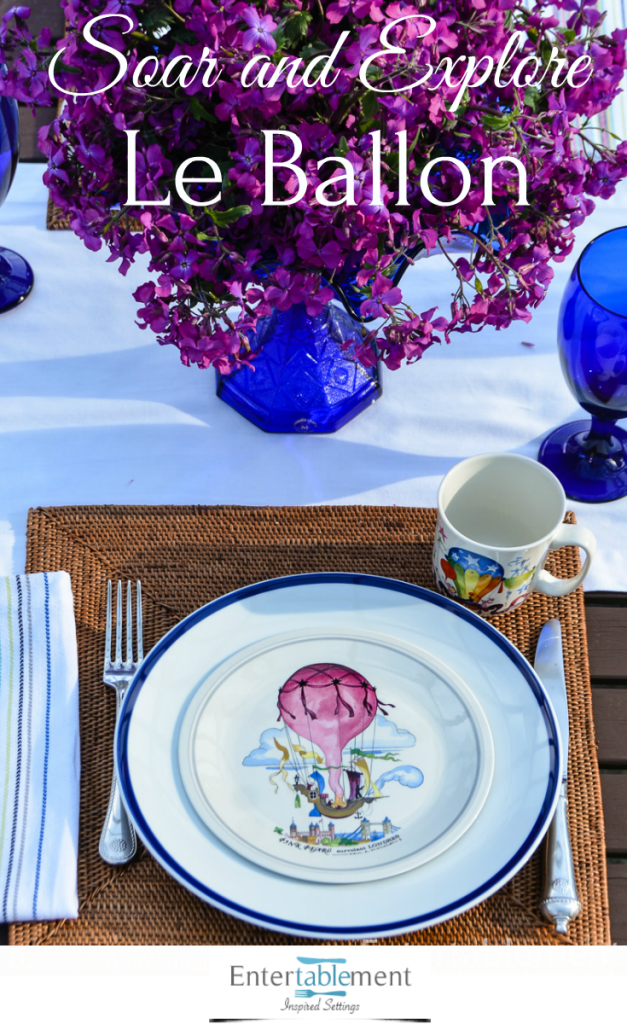