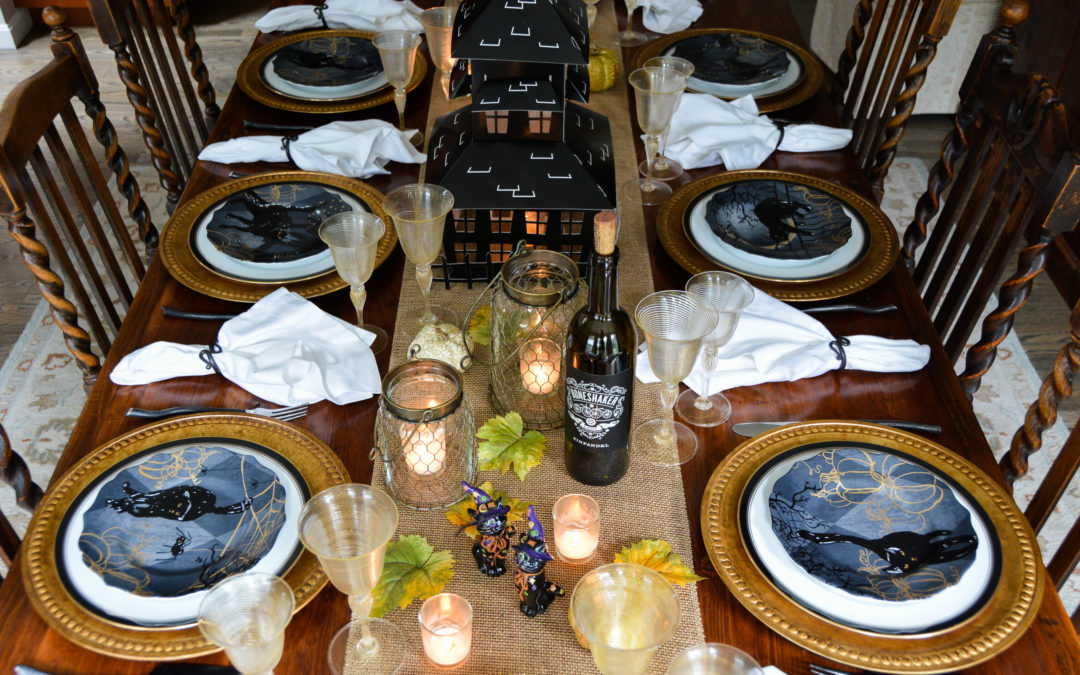 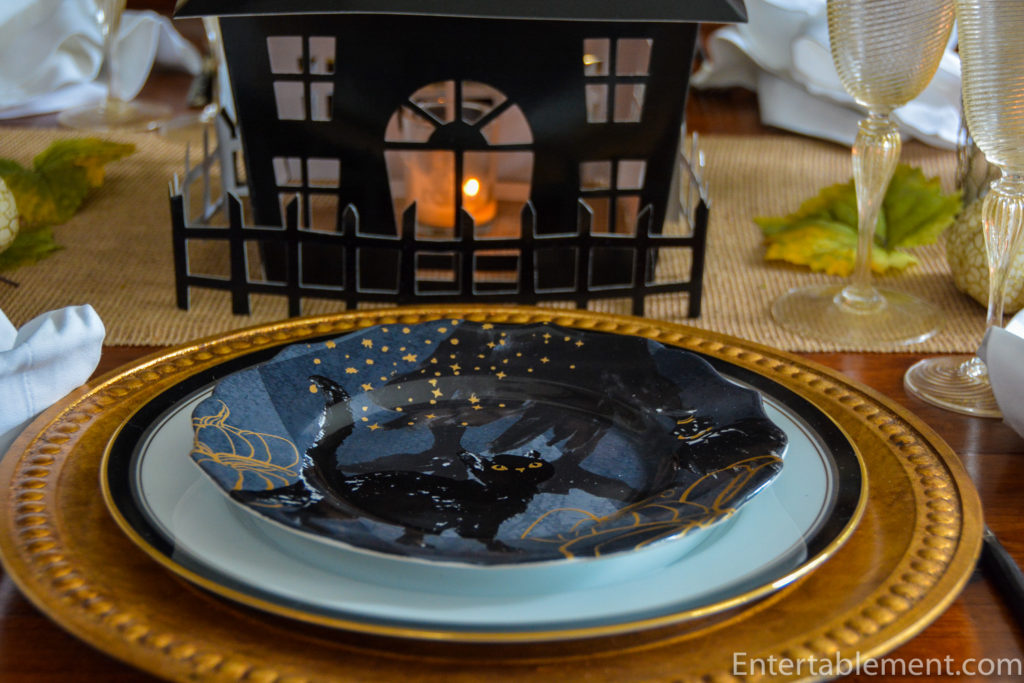 All ready for some Halloween fun? We’ve got a haunted house and a bunch of black cats all ready to yowl. 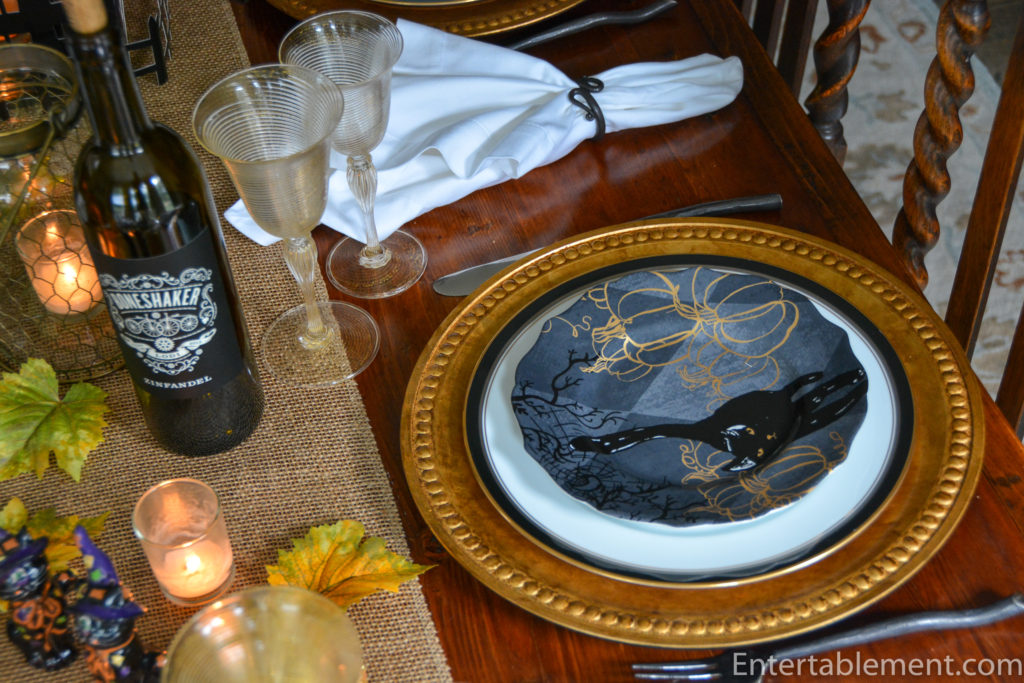 This creative set of black cat-themed plates by 222 Fifth is a fairly recent offering. I missed it in stores, but eBay came to my rescue as I was gearing up for the prowling season. Four furry felines slink across the grey harlequin checked backgrounds. 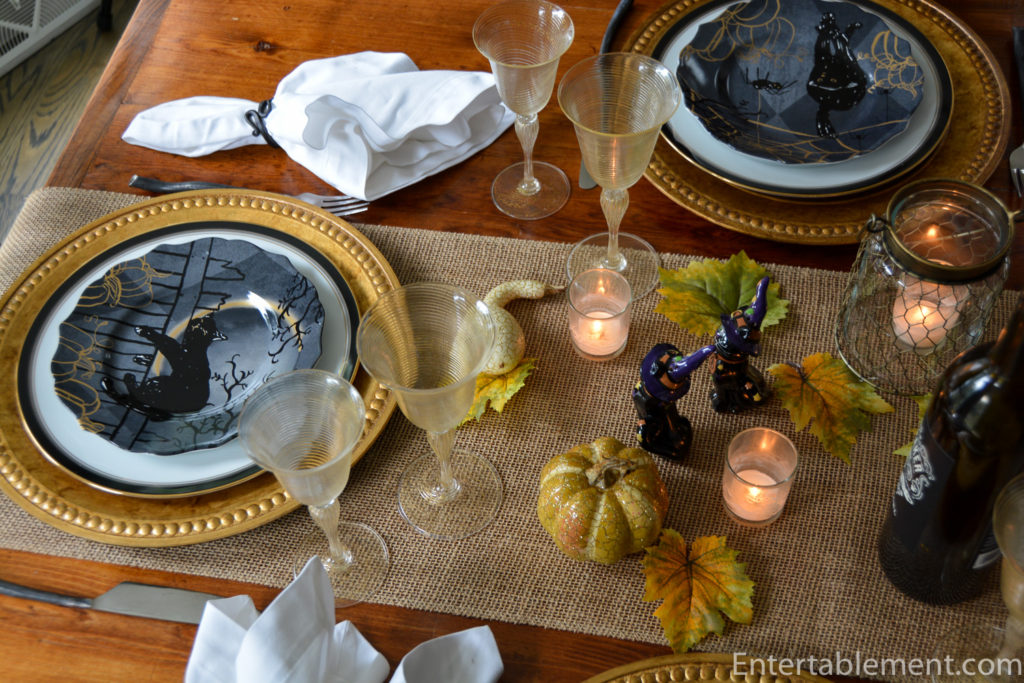 This guy seems more scared than scary. The spider’s got him spoked. 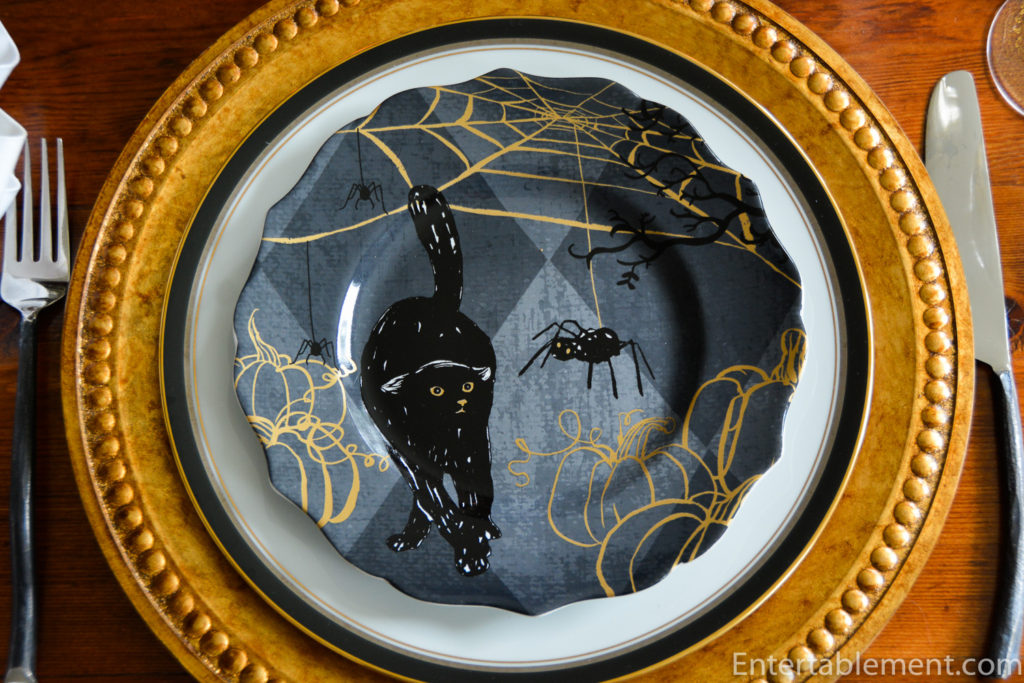 His more relaxed buddy is taking a snooze on a wrought iron fence, looking as though he’s been gently lulled to sleep in the lap of the crescent moon. 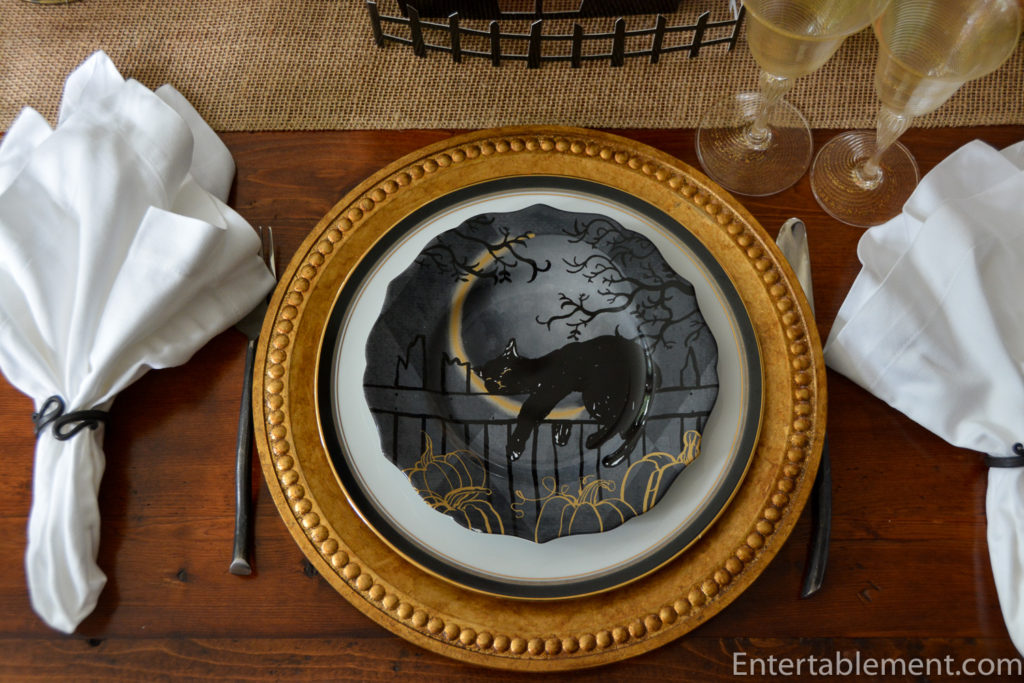 Purring among the stars and the golden pumpkins, this one says “Join me?” 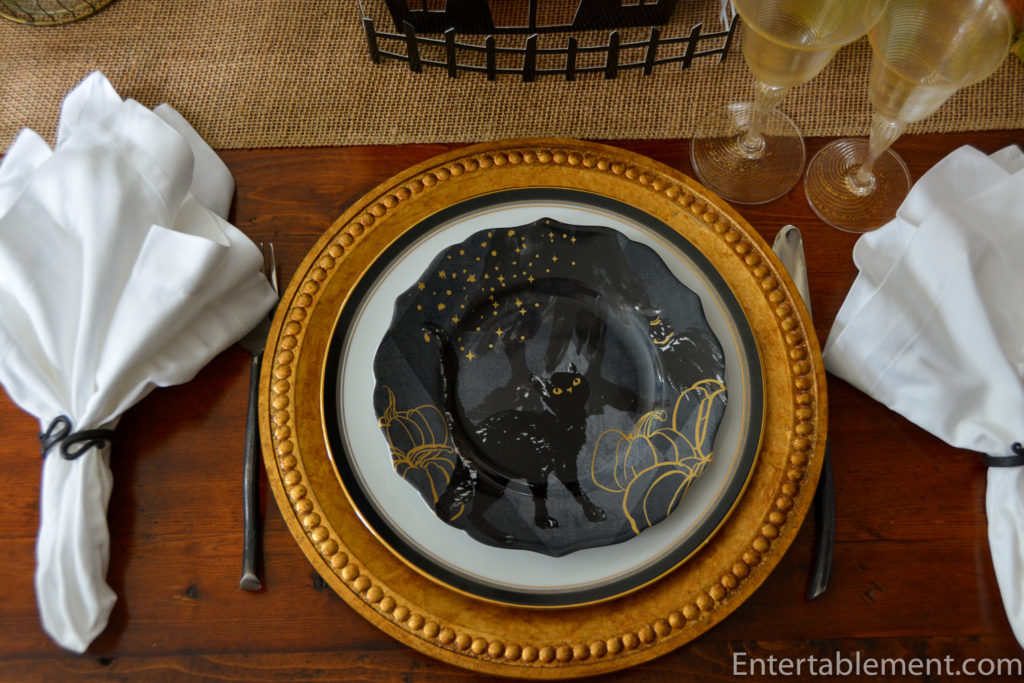 And prowling, panther-like, with that half sleepy expression so often seen on confident cats. 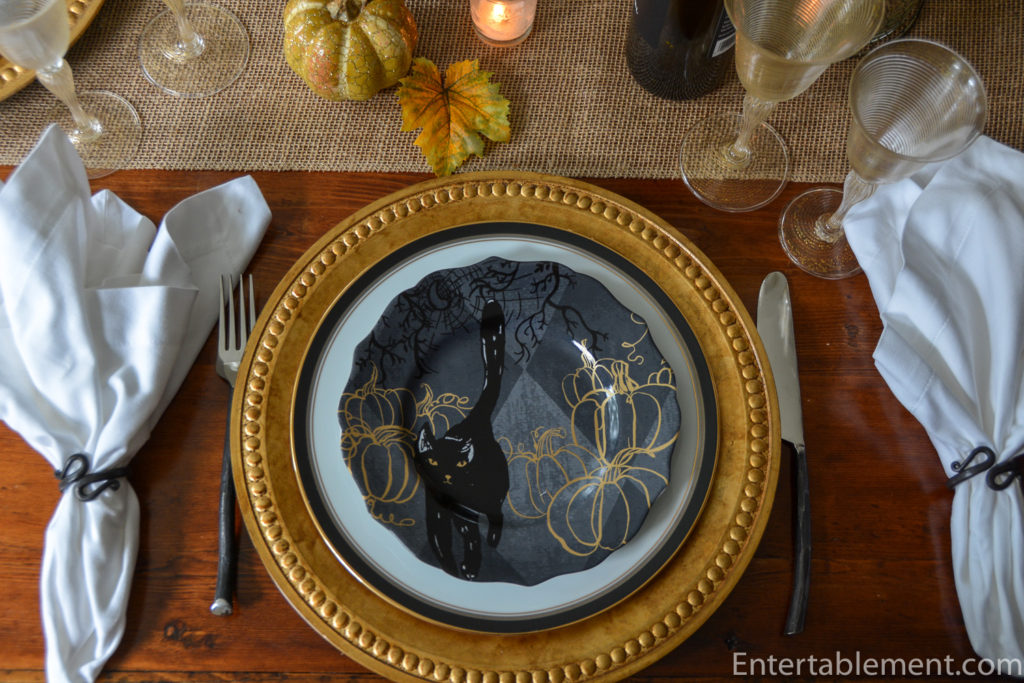 Shortly before I set this table, we were out to dinner at Brewster Fish House and were introduced to a delightful Zinfandel, Boneshaker from New Zealand. Who could resist? 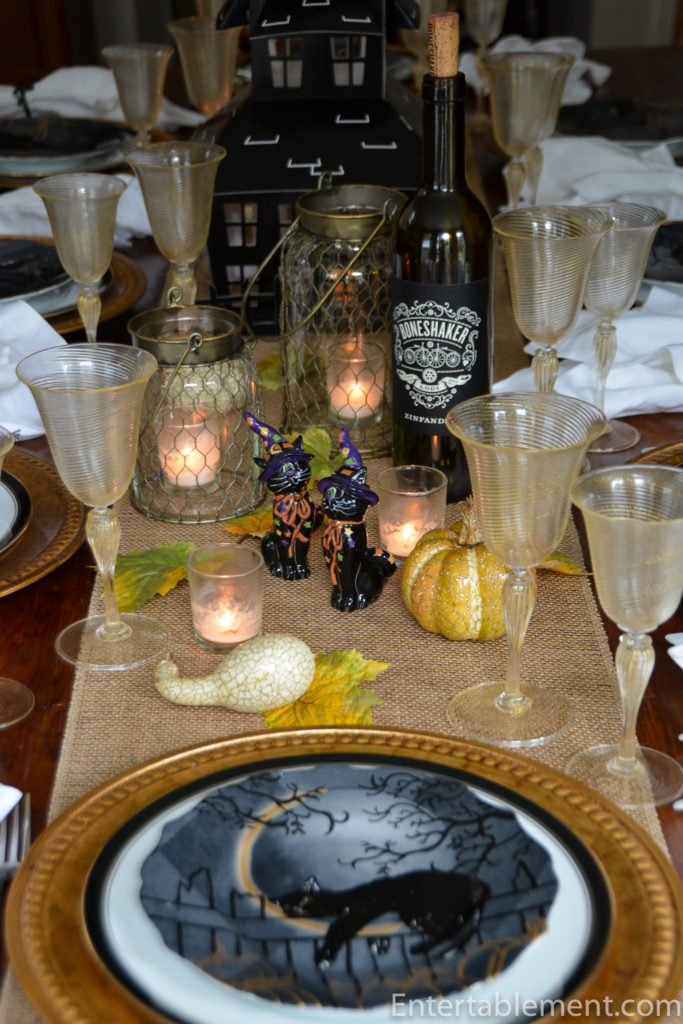 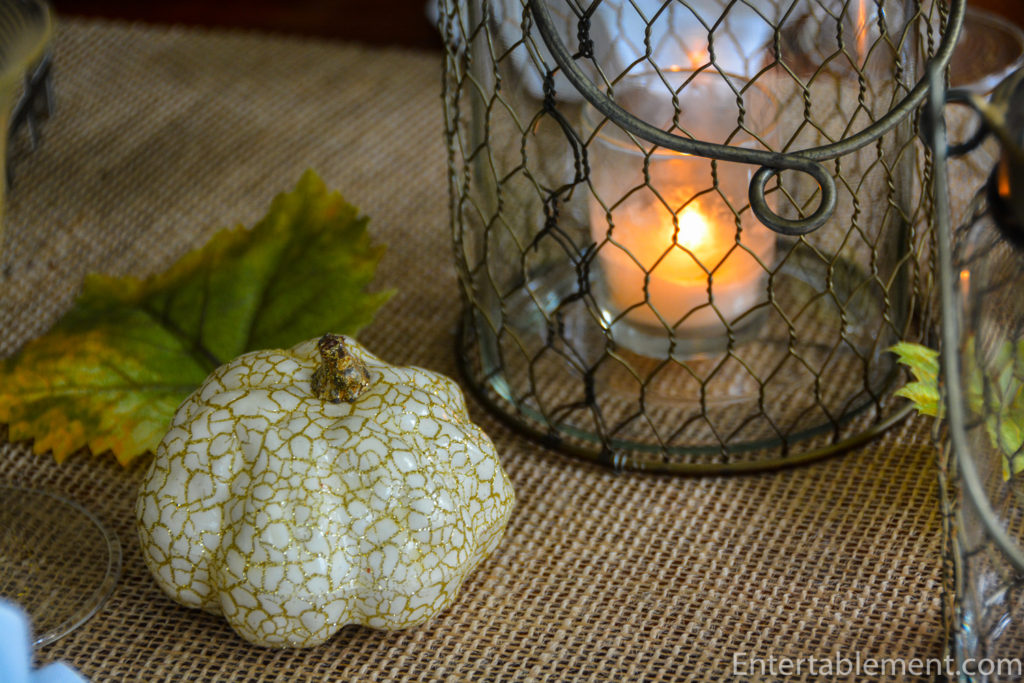 … along with chicken wire covered jars from Harvest of Barnstable. 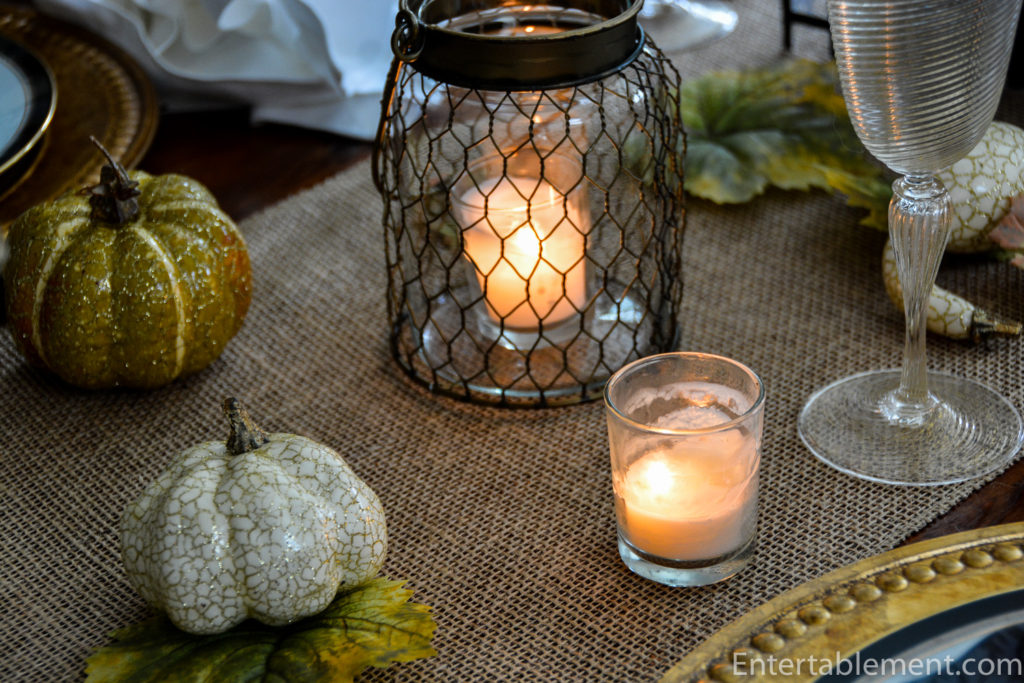 Antique gold-swirl Venetian goblets from Elise Abrams Antiques raised the tone of the table a bit. 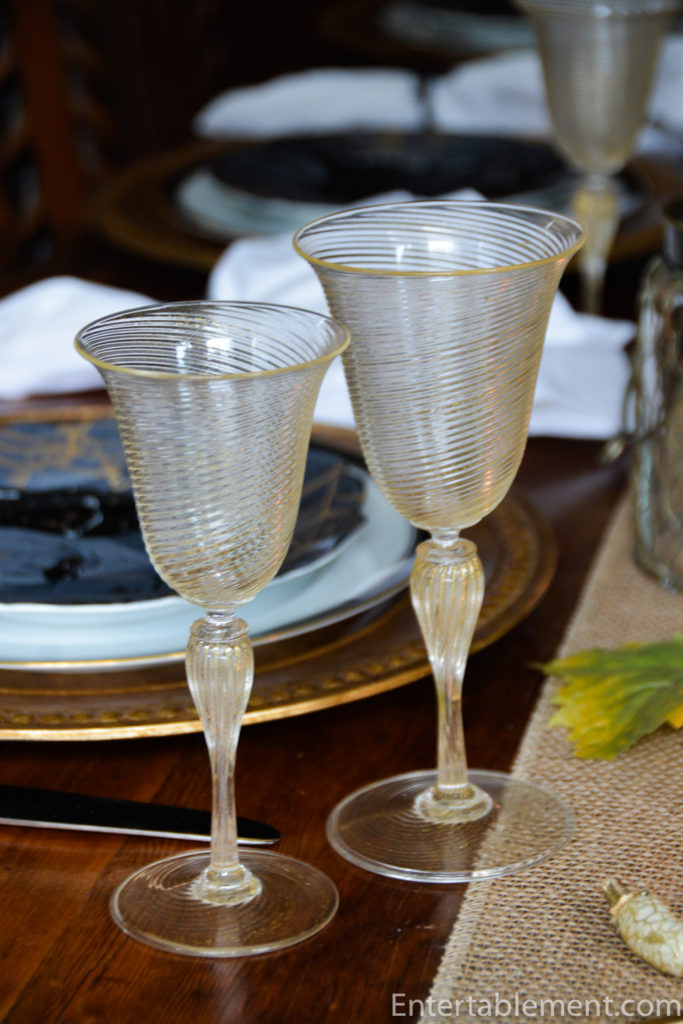 And a black haunted house from the Oriental Trading company brought it back down to earth. 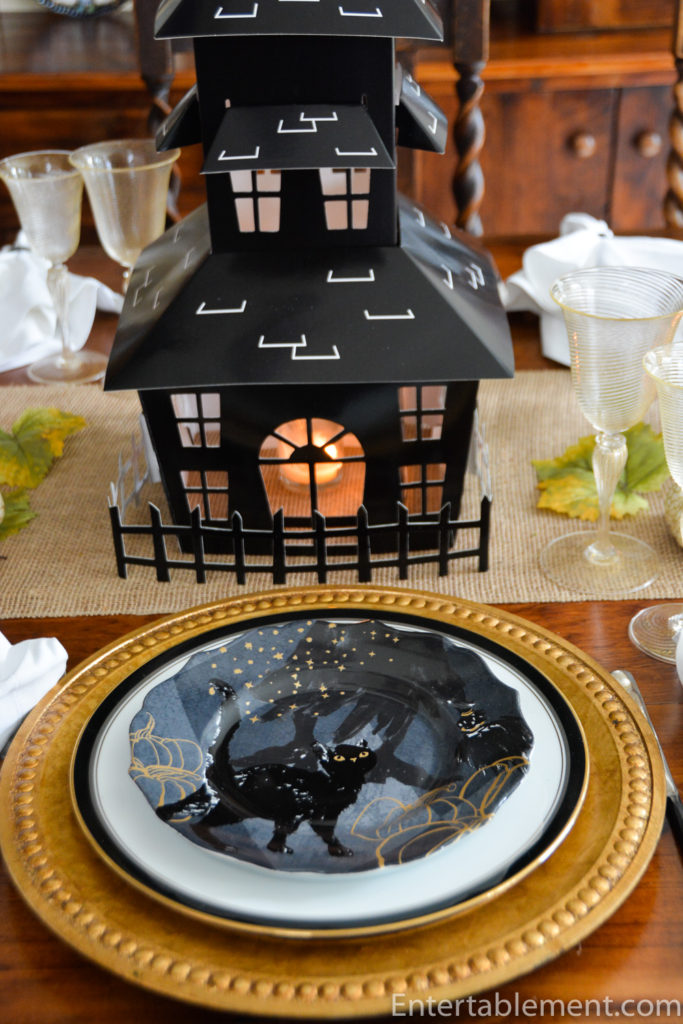 Black twig cutlery and fiddlehead napkin rings from World Market joined in, as did some Nocturne dinner plates by Royal Prestige. I’d never heard of that manufacturer before, but the plain black and gold rim fits any number of themes from Halloween to New Year. I’m sure they’ll join us for many tables. 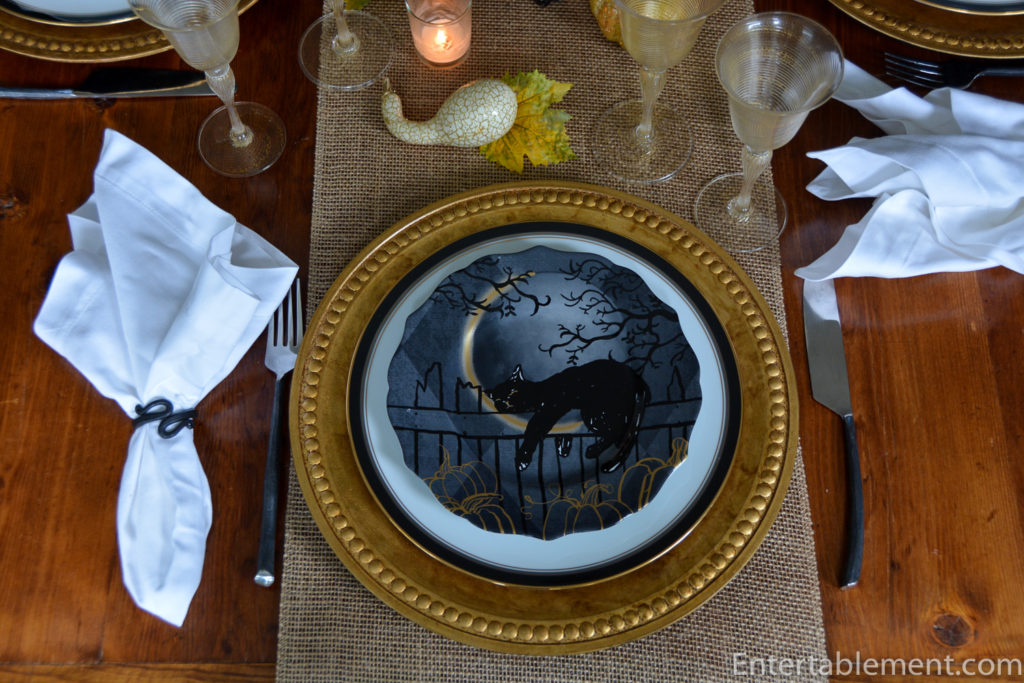 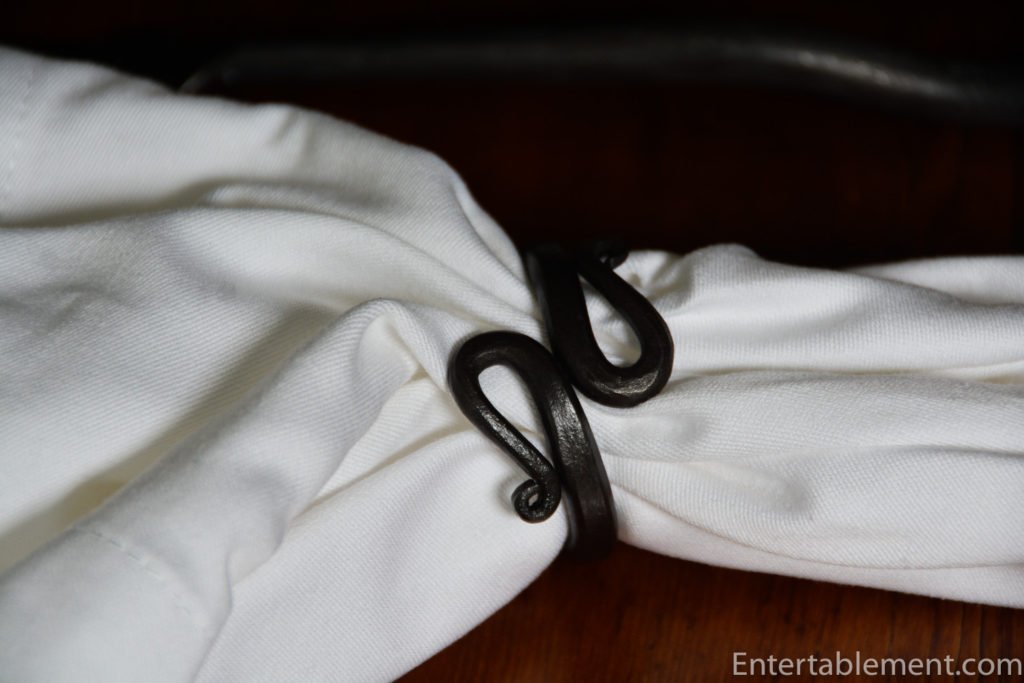 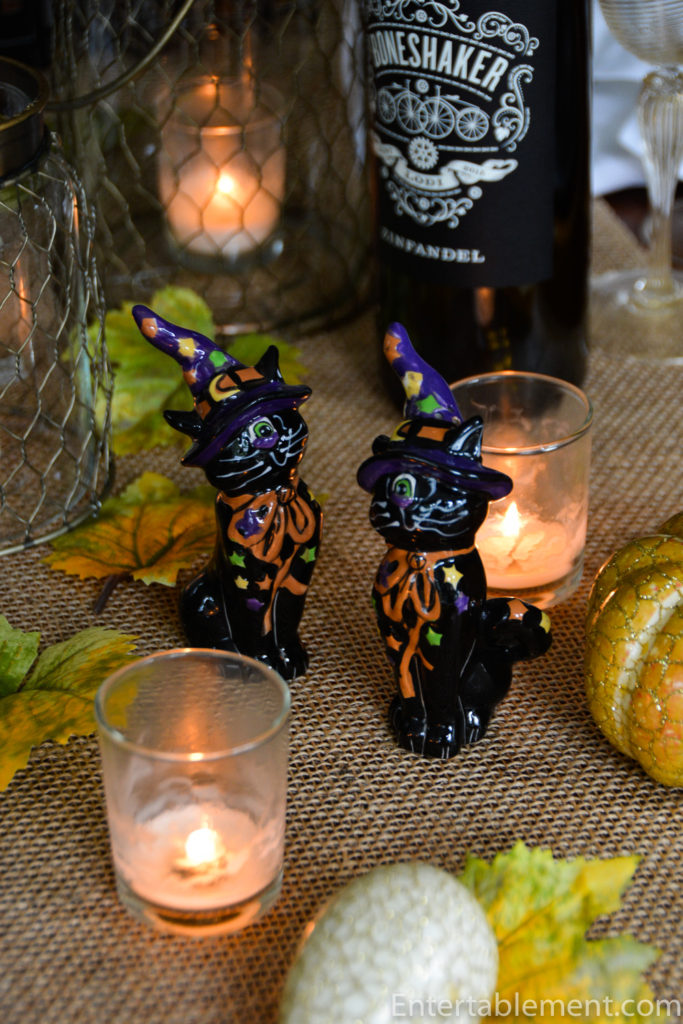 They look downright diabolically demented, don’t they? They’re by Blue Clay Pottery. I got them on eBay. 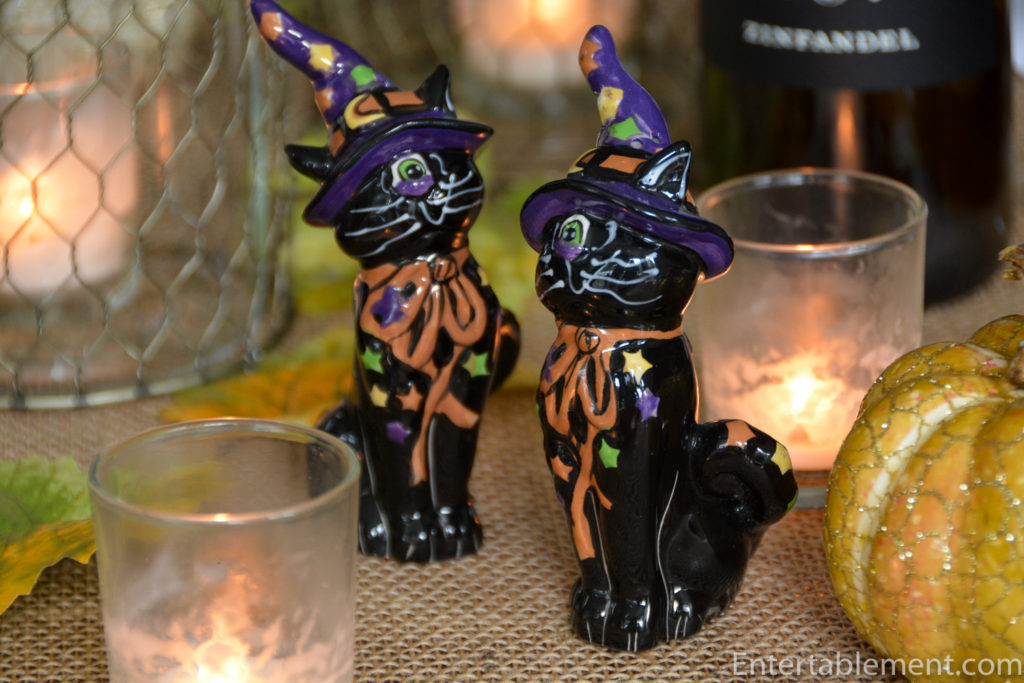 I had a ton of fun with this crowd of kitties. 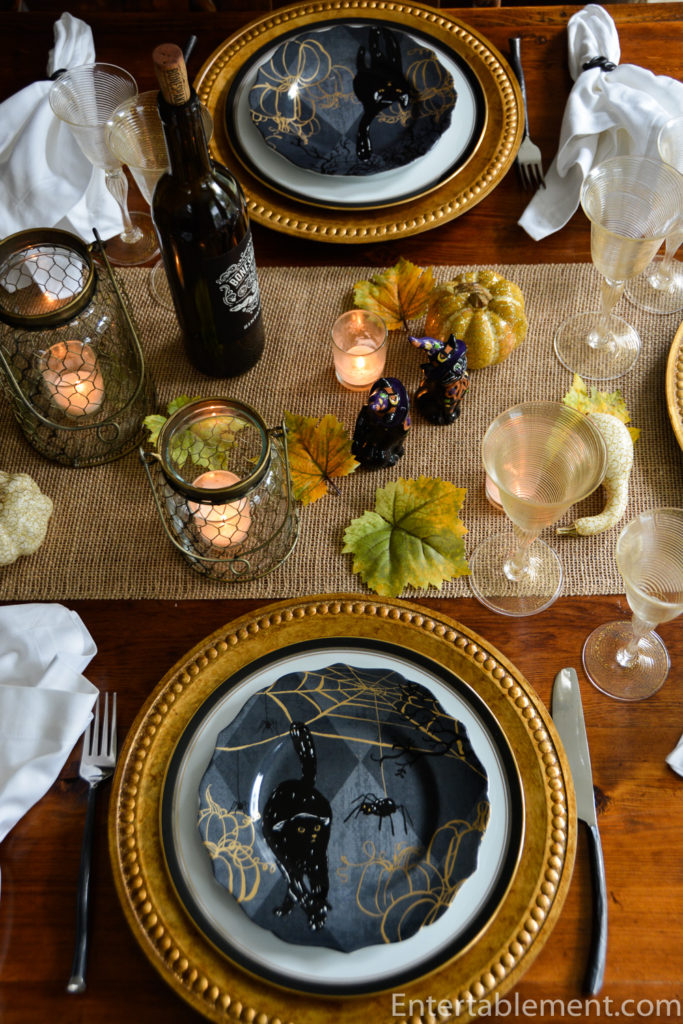 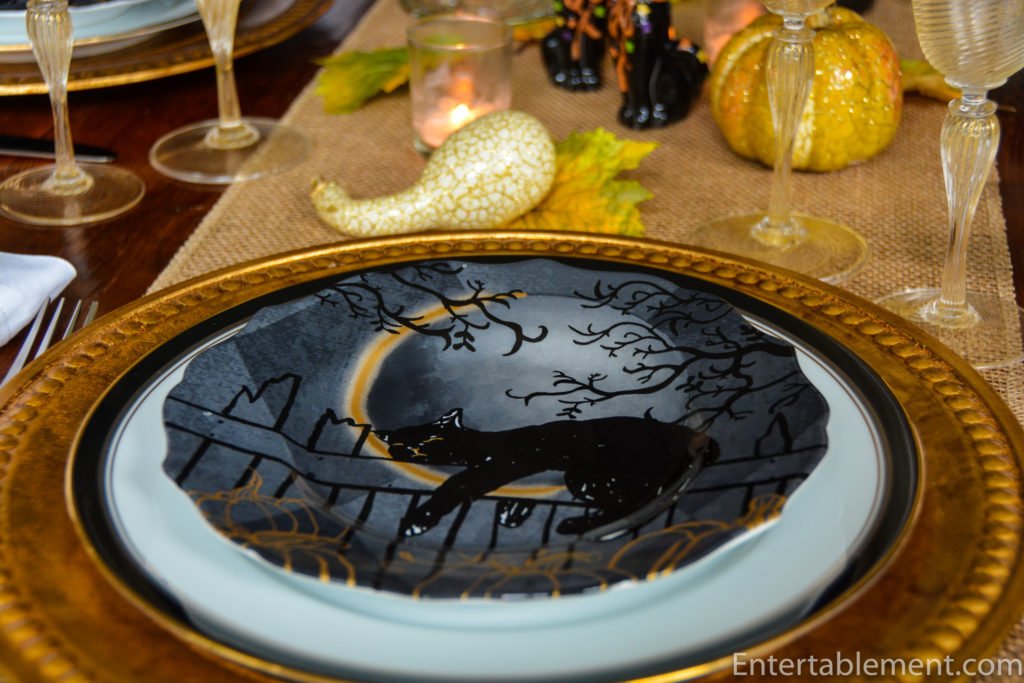 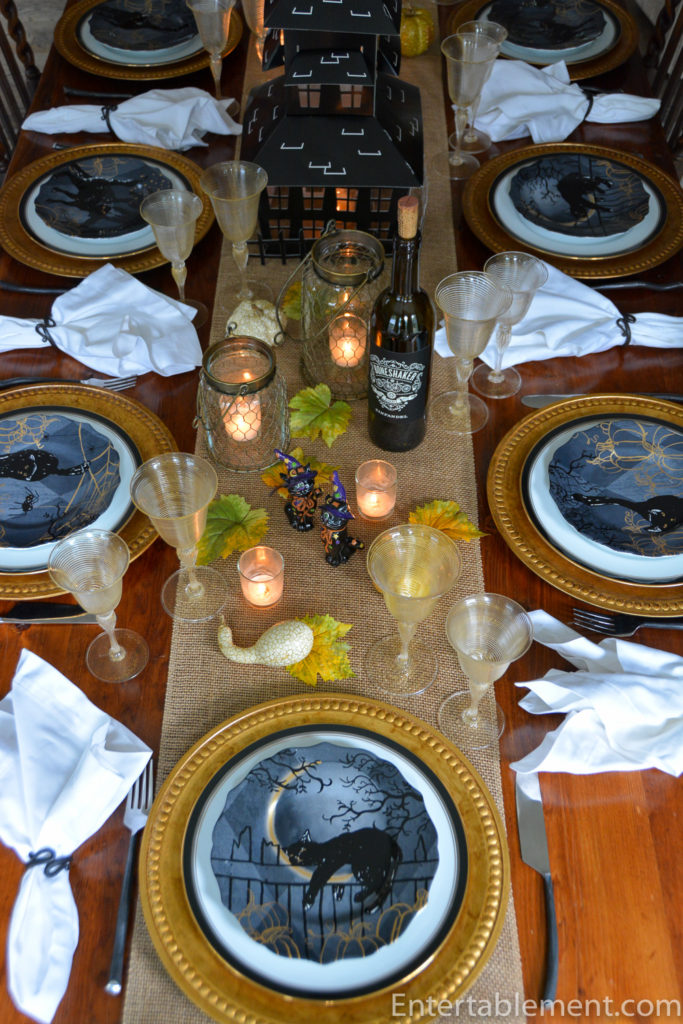 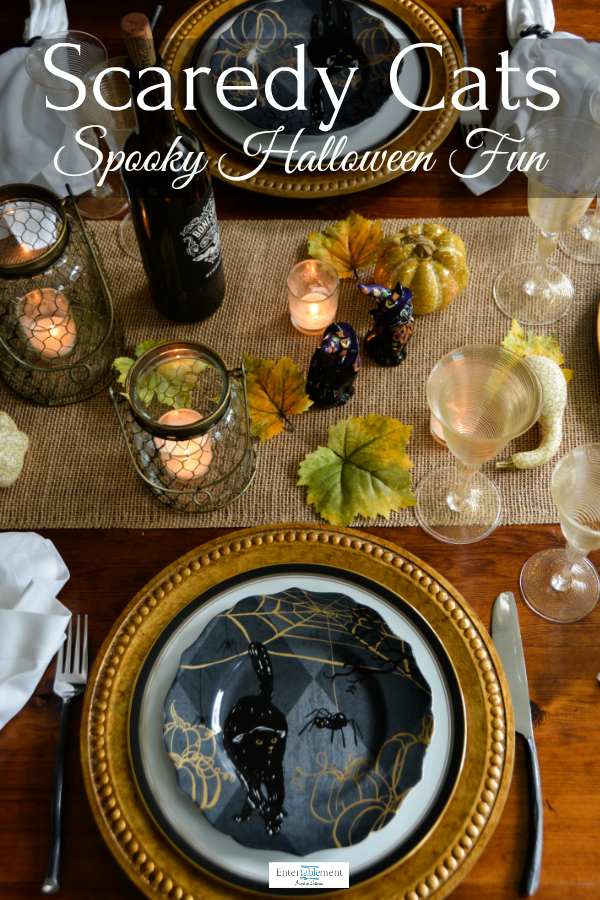