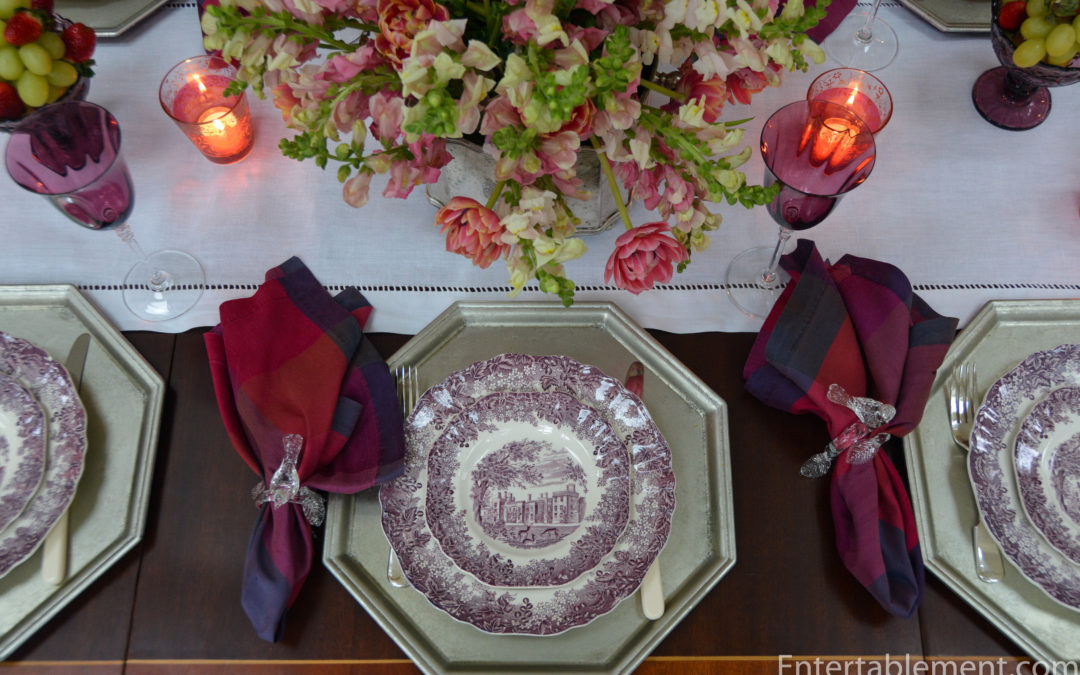 Pink and purple was my favourite colour combination when I was about six, which I think is pretty common. I like to think I’ve moved on to more sophisticated combinations since then, but maybe not! 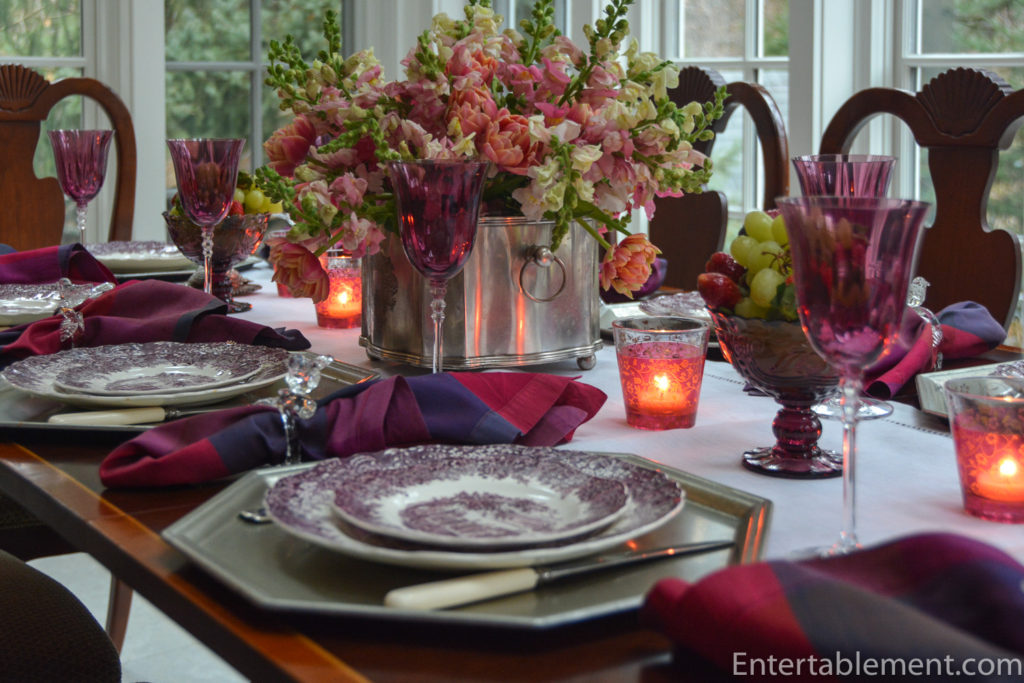 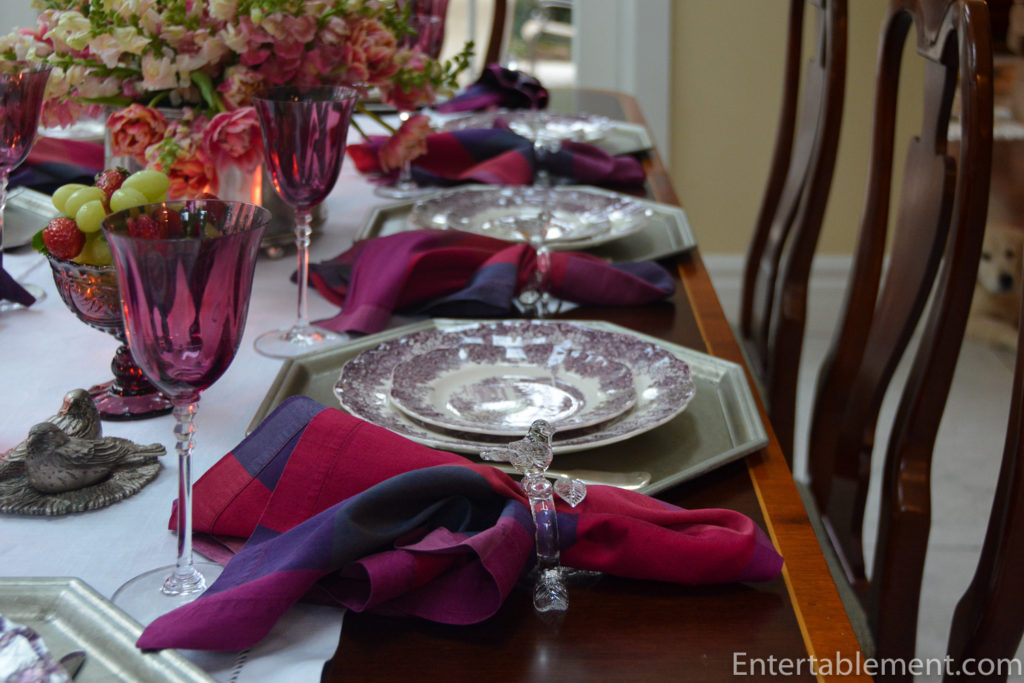 The most delicate items on the entire table are the glass bird napkin rings. I picked them up at Pottery Barn about a decade ago. I love them dearly, but they’re not something to be tossed lightly into a drawer. 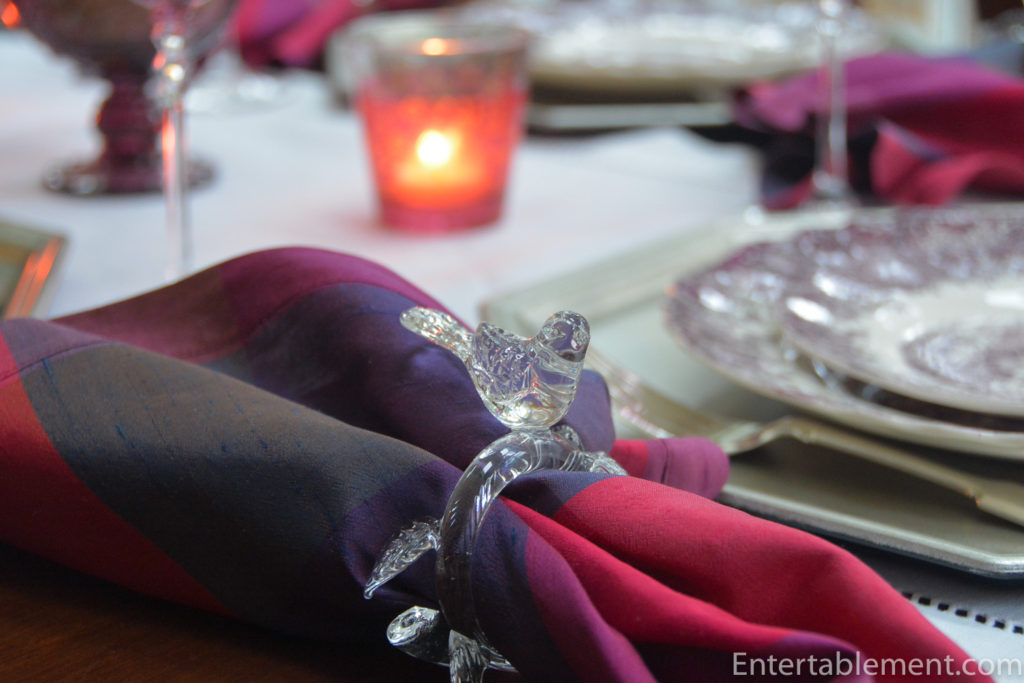 There are four different birds, sitting in various positions across the glass ring enclosing the napkin. The glass leaves at the base support the ring and keep it upright. 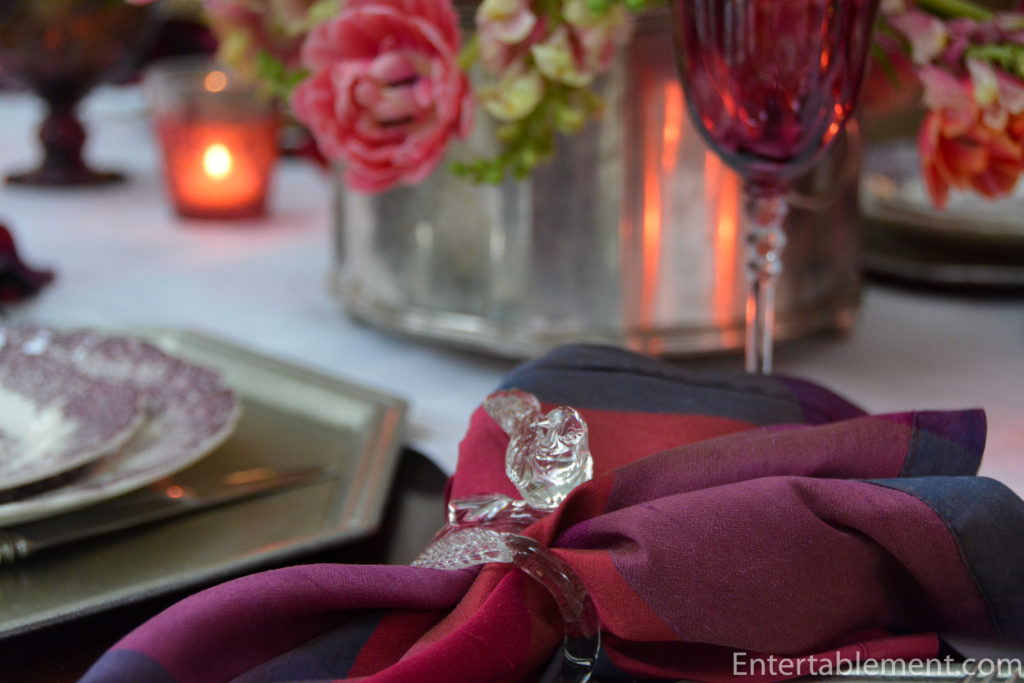 The napkins have been around even longer. I often use them at Christmas, or for a fairly formal dinner. One memorable meal, we had some relatives visiting from out of town, one of whom worked as a waitress at a family dining establishment. Striving to be helpful, she got up from the table and began to gather the plates, tossing the silk napkins onto the remains of the food on the plate, and then stacking the plates one on top of the other. 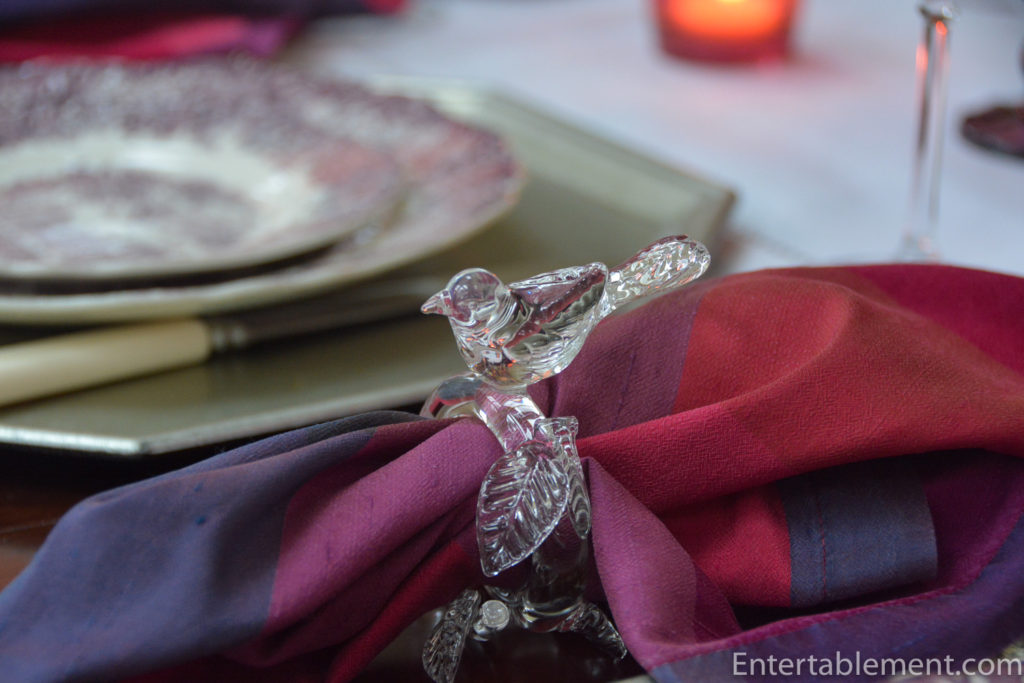 Her eyes briefly bulging, my daughter Lauren, who is the soul of diplomacy (she doesn’t get this from me), quickly rose and took the plates from her, saying “We like our guests to enjoy their meal in peace; please let me do that. Would you like some more wine?” Needless to say, those napkins took some extended TLC to recover. But they lived to tell the tale! 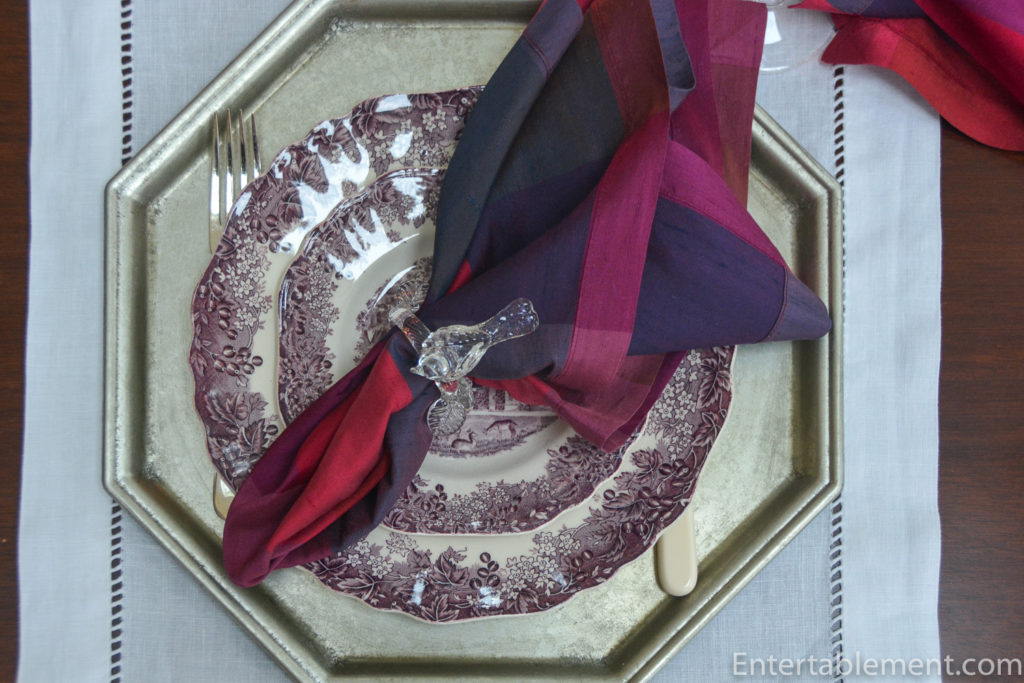 I couldn’t resist the exuberant snapdragons from a local fruit and flower stand. They’re such a fun flower, don’t you think? 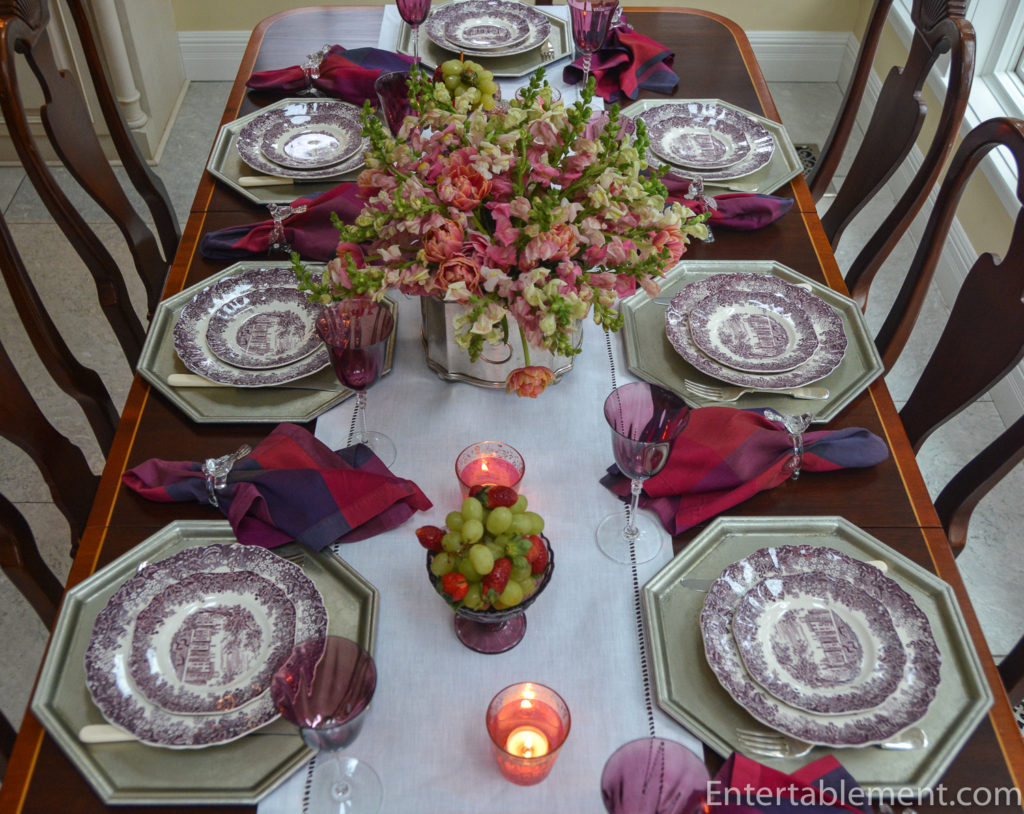 My grandfather used to grow snapdragons, and as a child, I loved to delicately probe the hooded depths of the blooms as they nodded gracefully in the breeze. 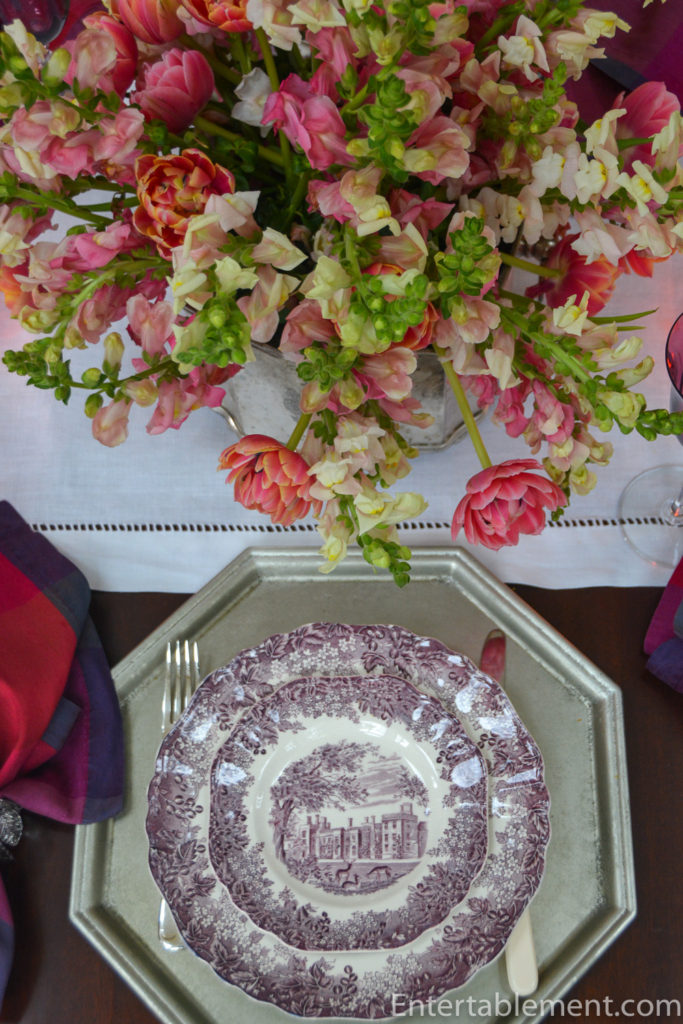 They come in such a gorgeous range of colours, from pale to bright pink, through to shades of coral and yellow. 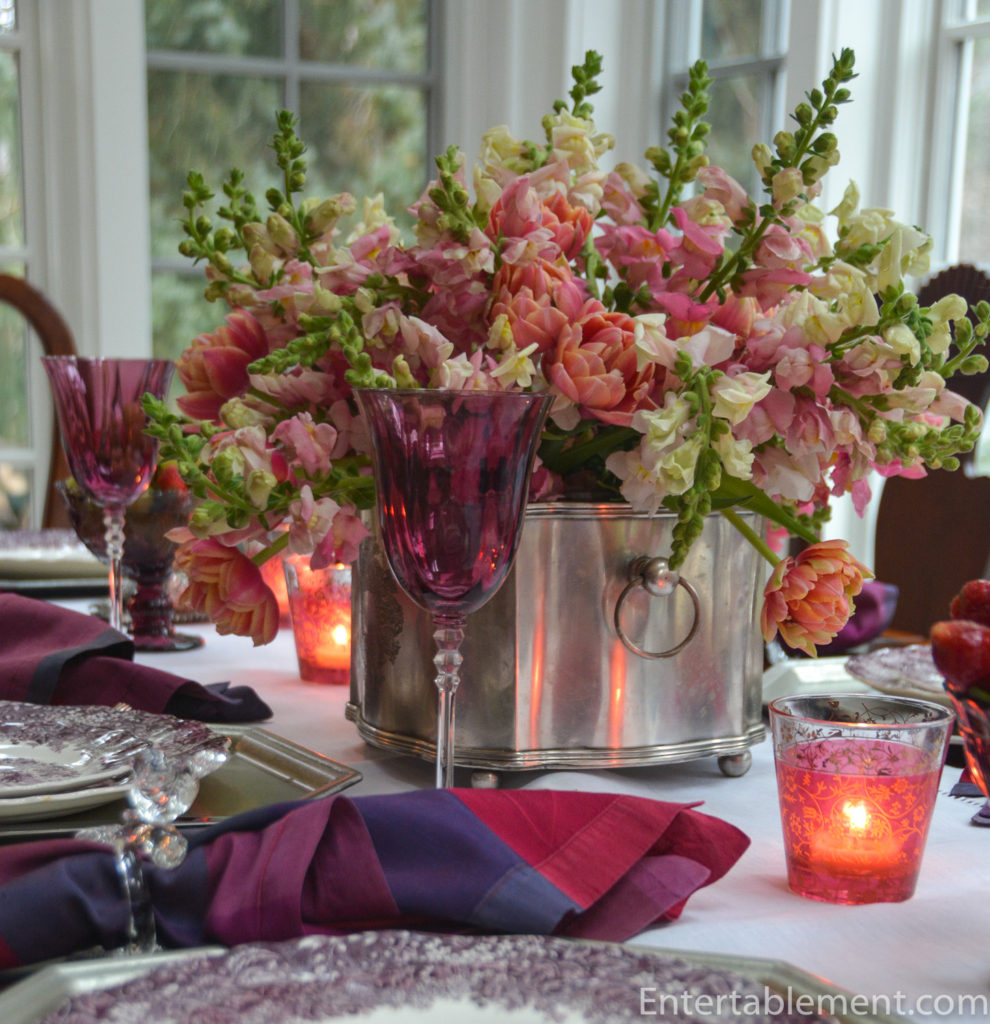 The plates are Romantic England Purple by Meakin. I’ve used them a few times in table settings, most recently here. 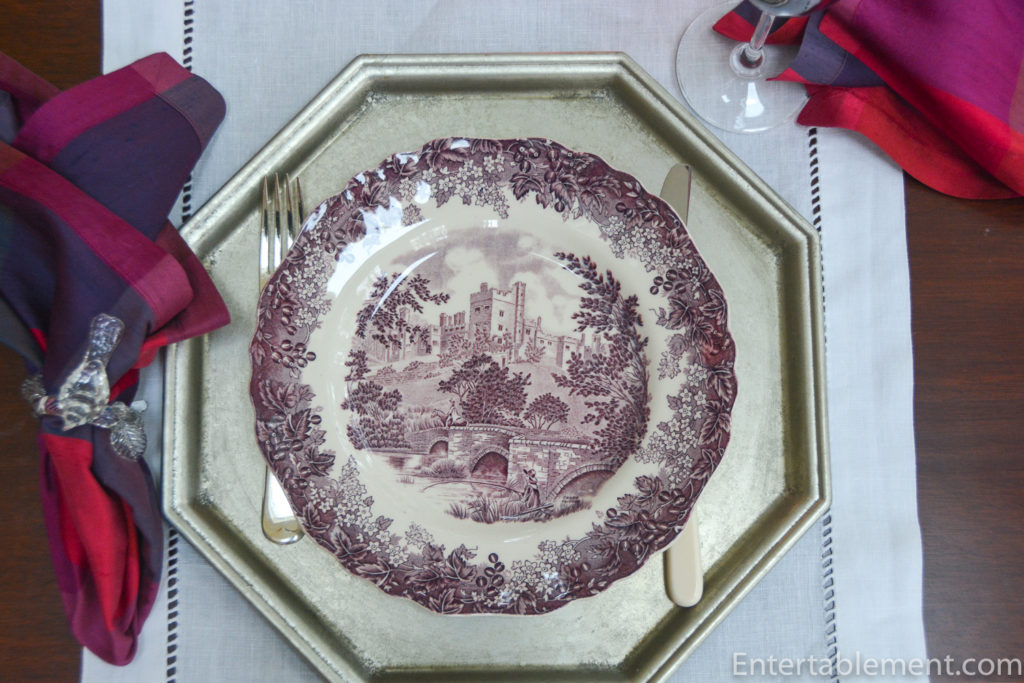 At the time of writing that post, we had not yet visited Haddon Hall, which is depicted on the dinner plate. We have since then and loved it; it’s a really beautiful house. 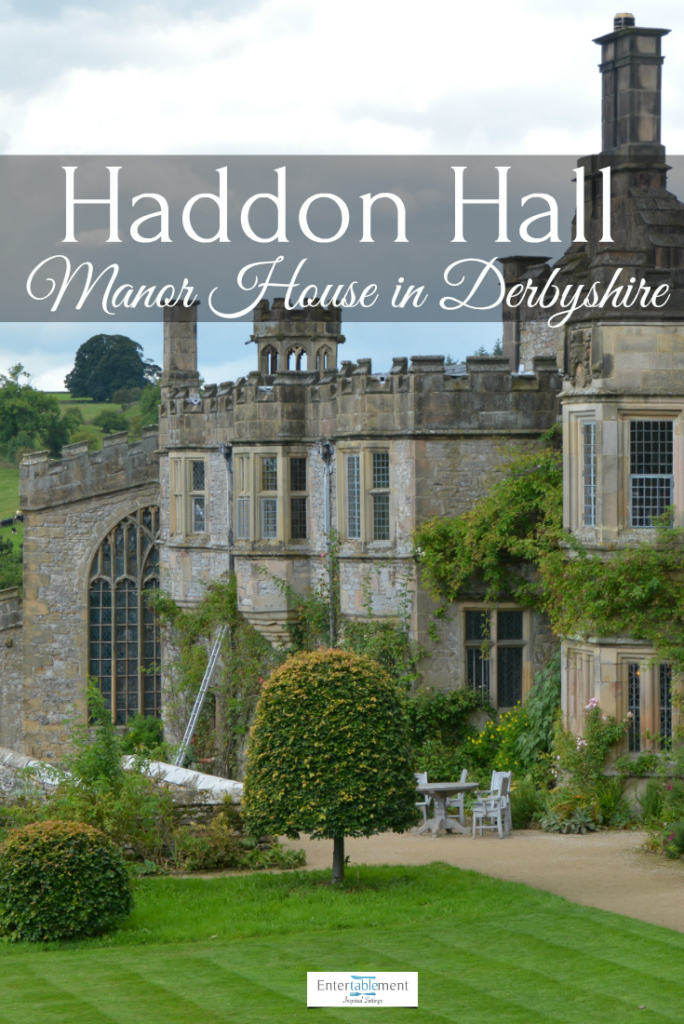 Still on the list is Penshurst Place, in Kent, which is on the dessert plates. Originally one of King Henry VIII’s many homes, it has been in the Sidney family since the mid-16th century. Kent is one of the home counties and is known for its remarkably beautiful gardens. Sissinghurst, where we were lucky enough to rent a cottage for a week, is one of them. Must get Penhurst Place onto the itinerary for our next trip! 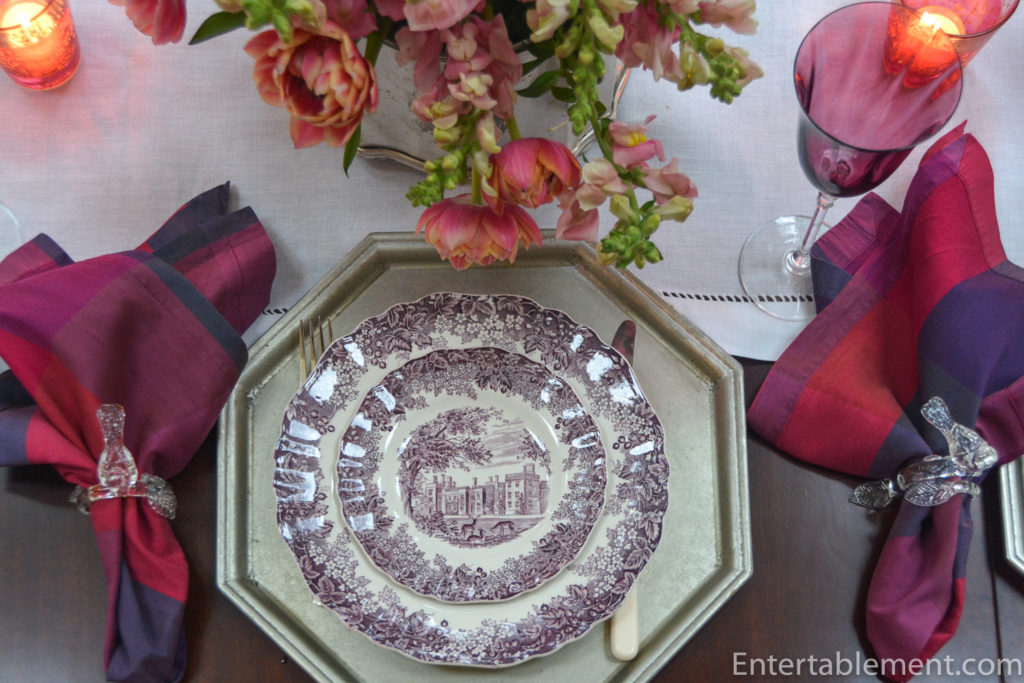 The glasses are a thrift store find from a few years ago. I think I got 11 glasses for under $20. 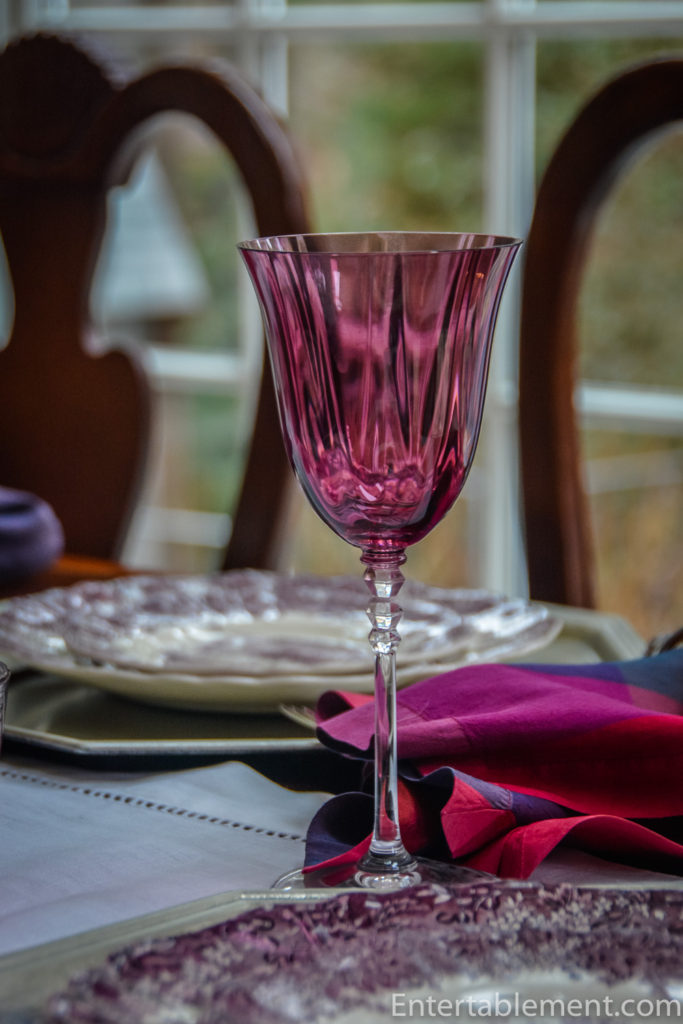 This set of bird salt and pepper shakers has been around forever, too. Originally from Blantyre, a country house hotel in the Berkshires where we were staying, I’ve since discovered they’re officially called the Kirkland Warbler by Michael Michaud. 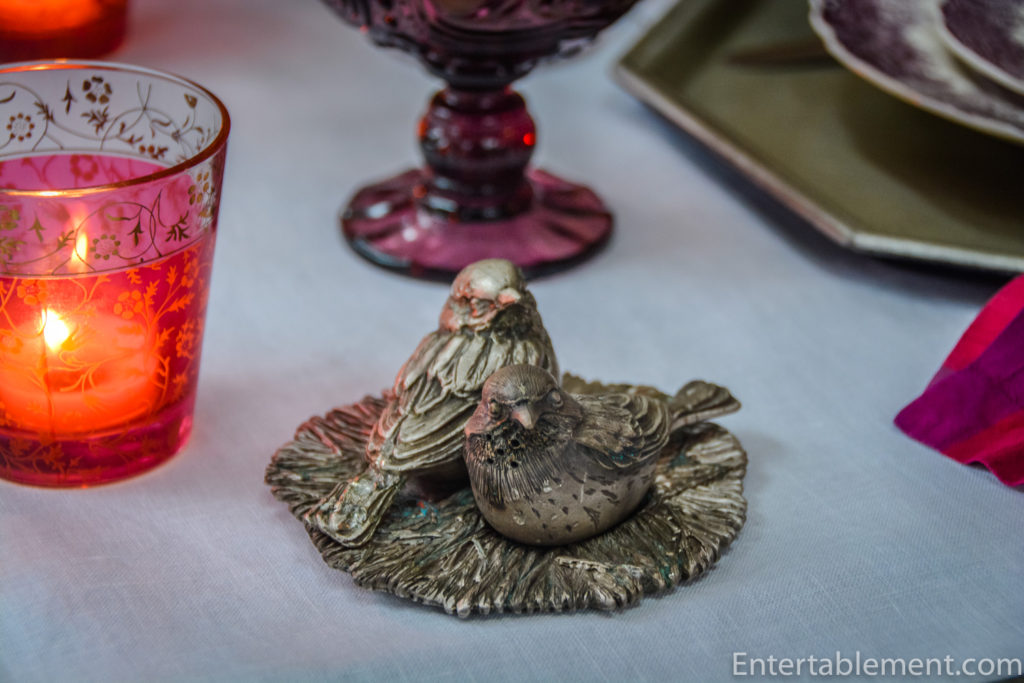 They’re available at Amazon now, though I’ve seen them in the past at Wayfair at a much better price.  Macy’s has a gold version right now, on sale from what seems to be an eye-popping original price. 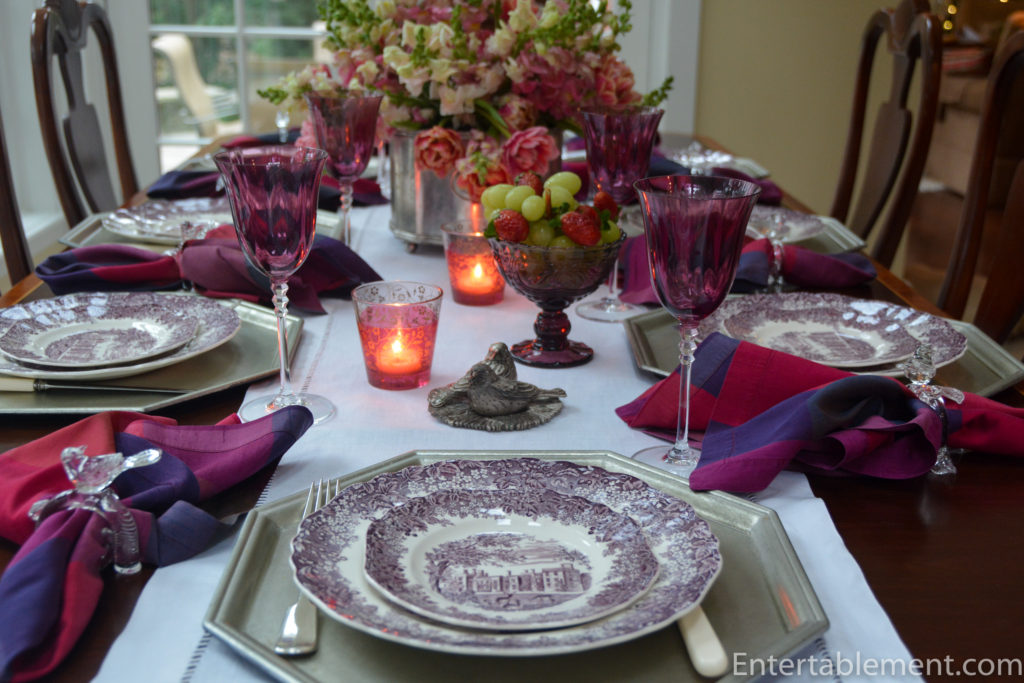 The small purple compotes holding the grapes and strawberries are pressed glass. Can’t remember where they came from, but they’re modern. They’re probably a Pier 1 or HomeSense find. 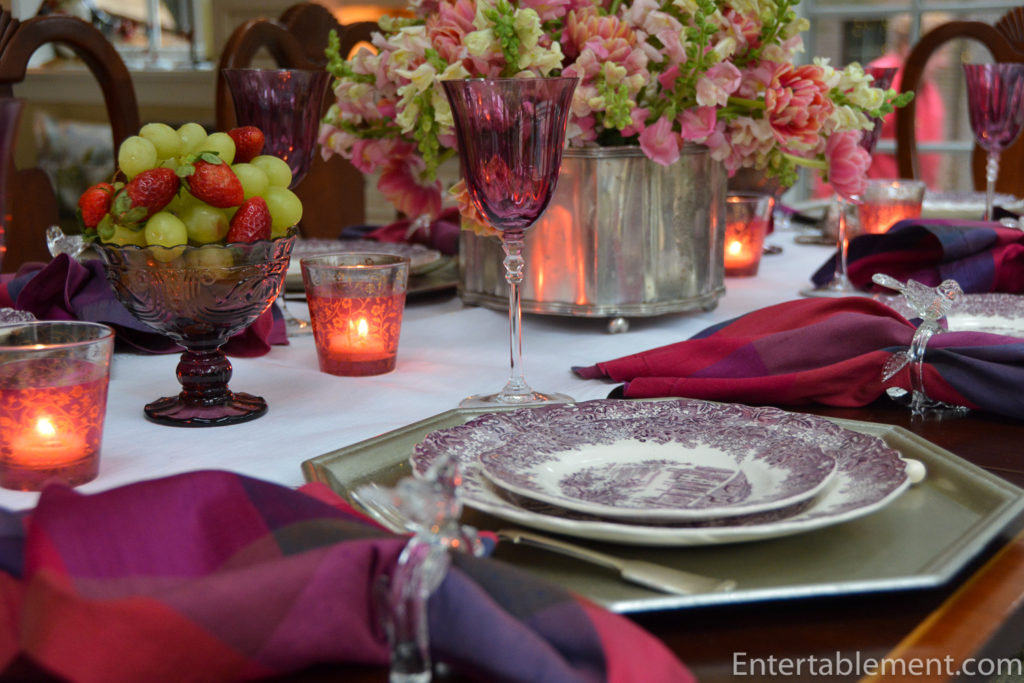 A somewhat garish, but cheery and fun table for a cold January day. 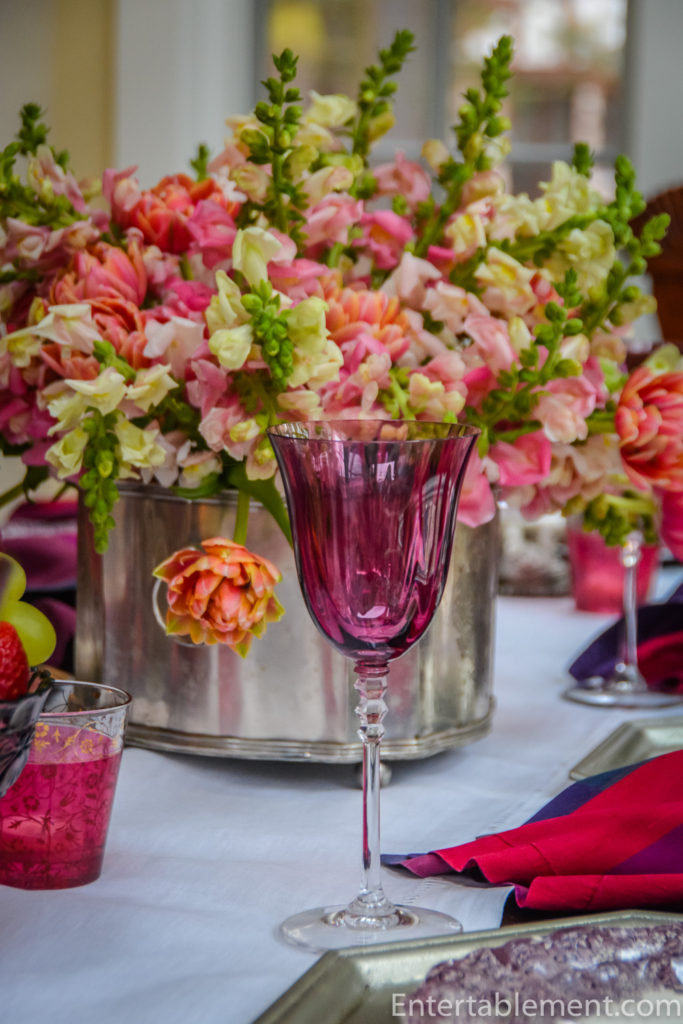 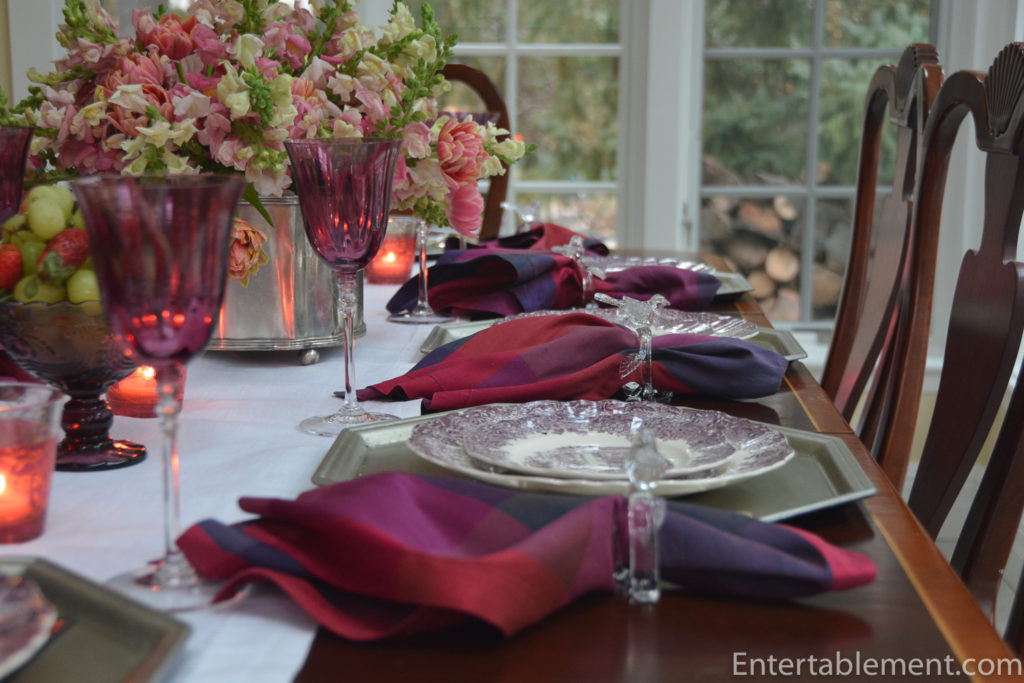 Stay warm, y’all! Rumour has it the polar vortex is on the move. We’re in for an icy blast and a dump of snow this week up in the Frozen North. 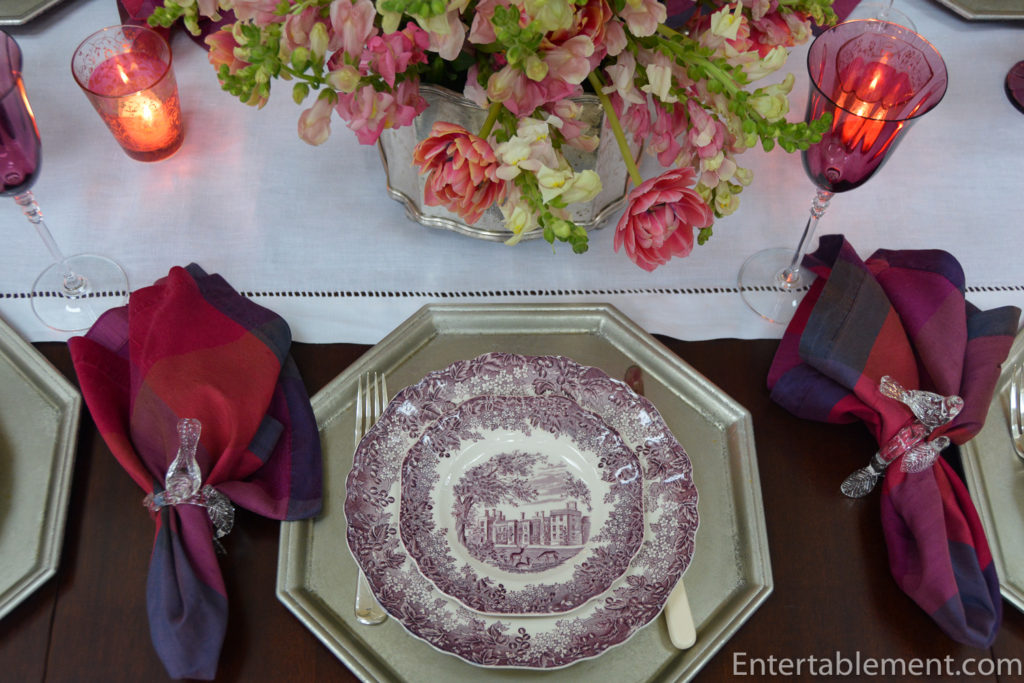