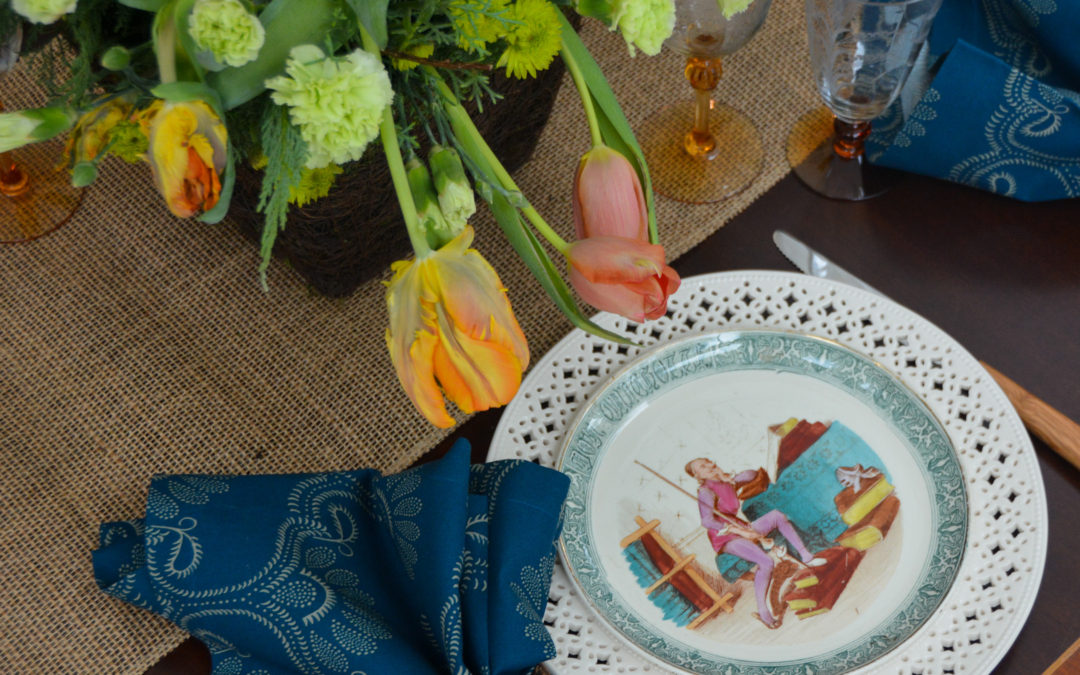 The Ingenious Gentleman Sir Quixote of La Mancha is the full title of the Spanish novel by Miguel de Cervantes, but most of us know it simply as Don Quixote, the story of a delusional knight-errant who tilted at windmills. His faithful squire, Sancho Panza, is shown in the foreground of the picture below shouting at Quixote to come back – those are not giants – they are windmills… 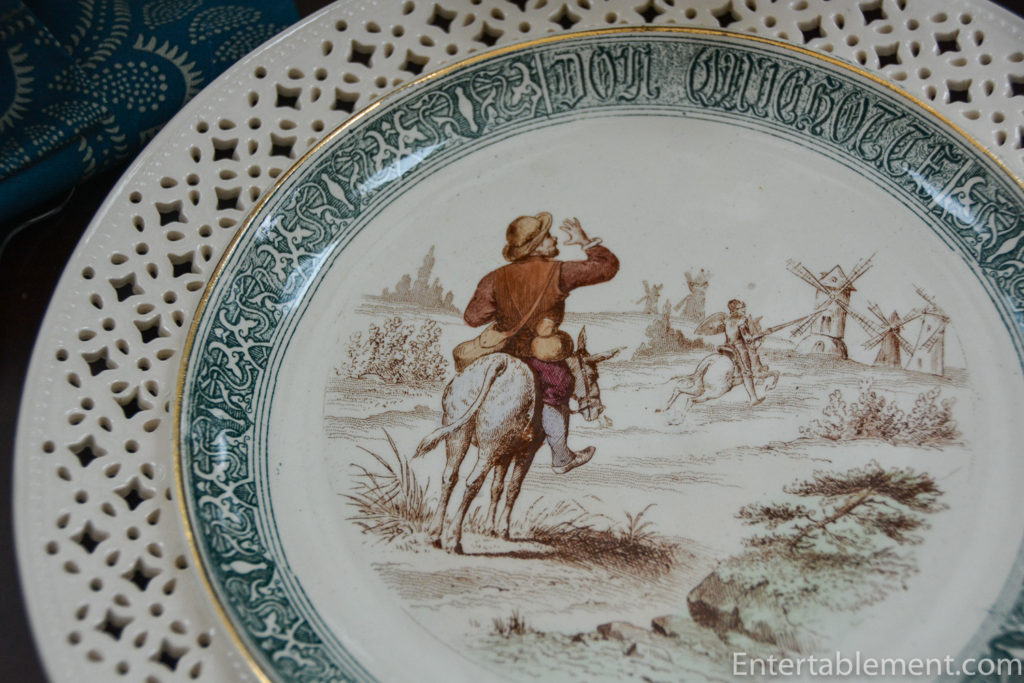 The windmills seem to be the least of the quixotic delusions; Don Quixote has read so many chivalric romances that he loses his grip on reality and becomes a knight-errant pursuing a series of quests in an imaginary world of his own creation. How’s that for a table theme? 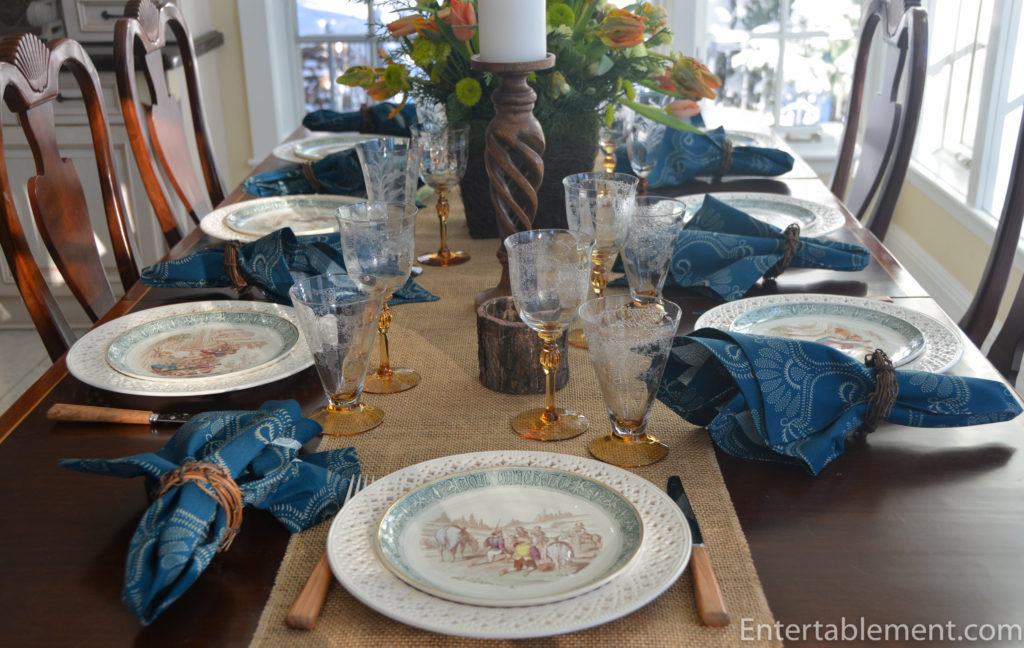 Wearing an ancient suit of armour and mounted on his aged steed, Rocinante, Don Quixote gets into numerous fights, often coming out much worse for wear, though it seems that his competitor’s horse took it on the chin in this instance. 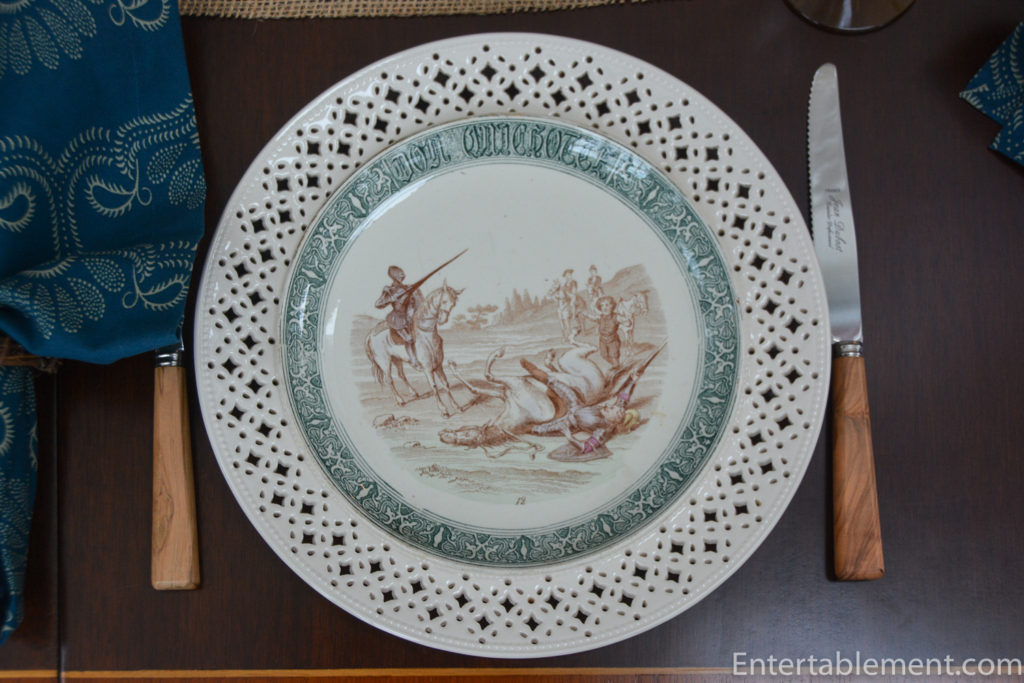 A knight-errant must have a lady love, of course; Don Quixote settles on a local farm girl as the object of his unrequited affection, renaming her  “Dulcinea del Toboso”  though she knows nothing of his devotion or her role in this imaginary drama. 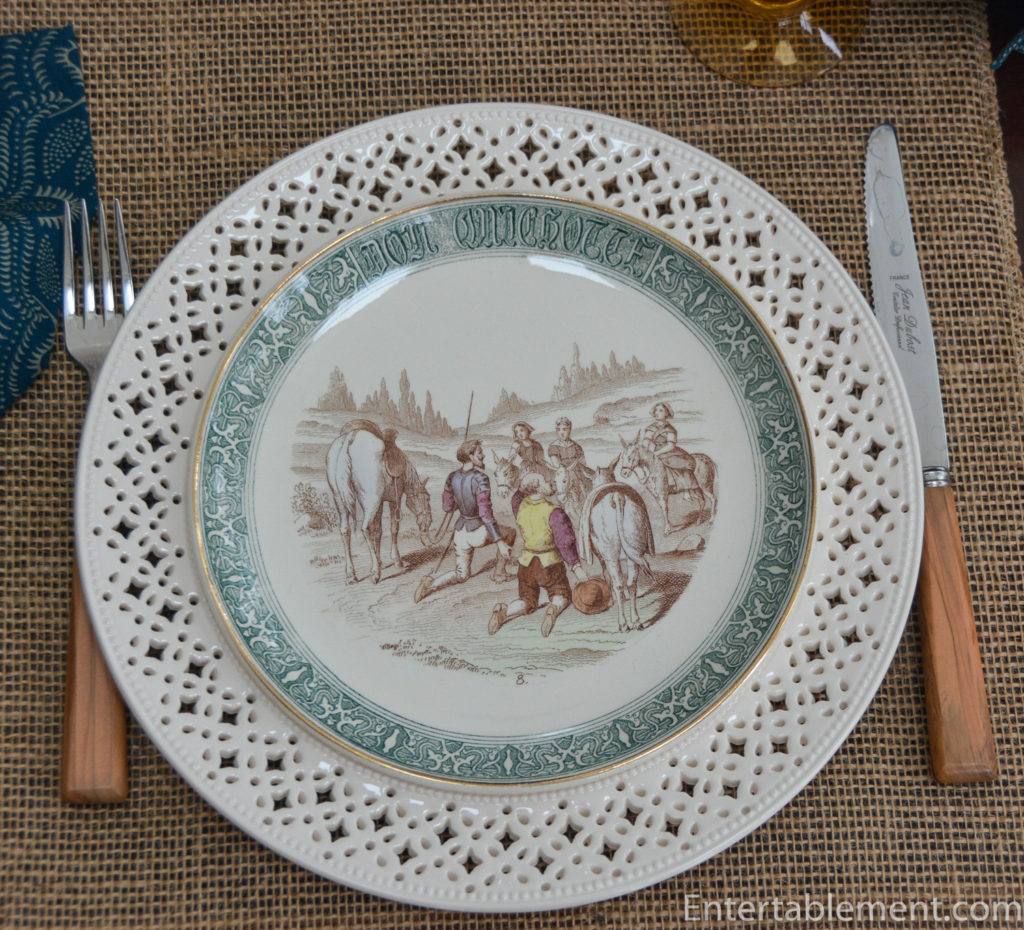 The tale continues as he arrives at an inn (a castle in his mind), greets the resident prostitutes (ladies of the castle) and tries to persuade the innkeeper (the lord of the castle) to dub him a knight. 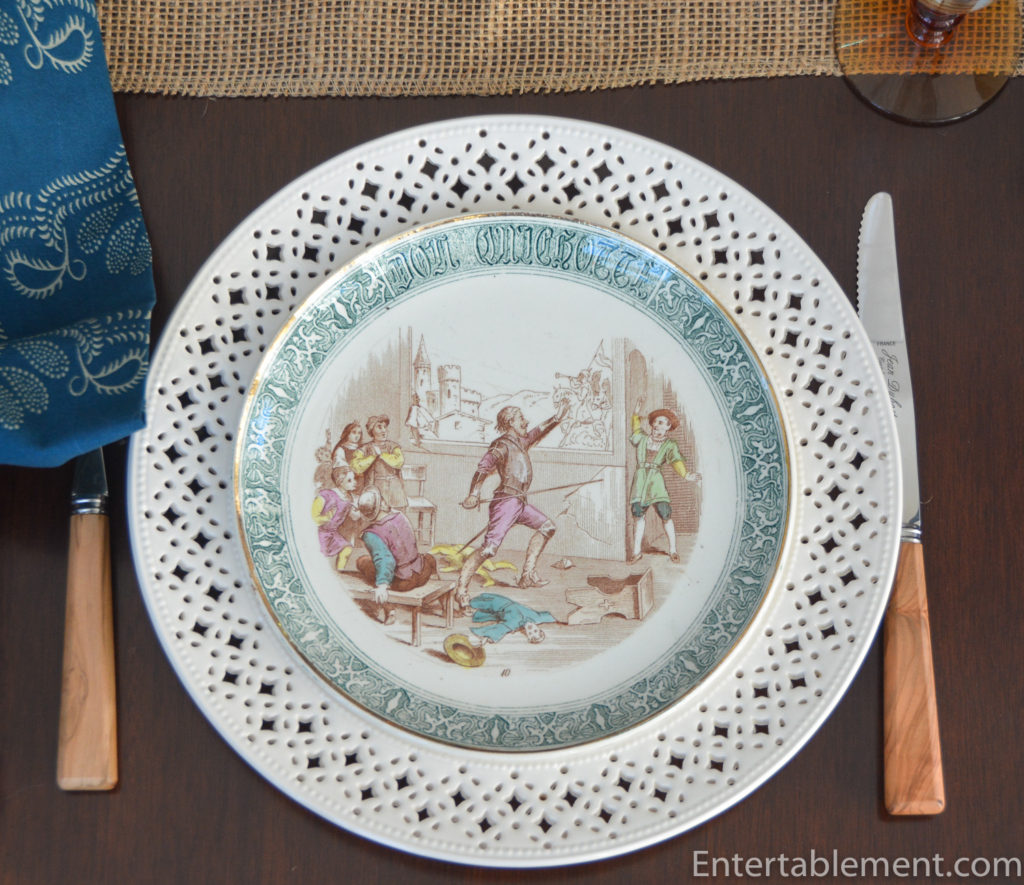 There are many, many fights, with Don Quixote usually being soundly beaten, often left unconscious. 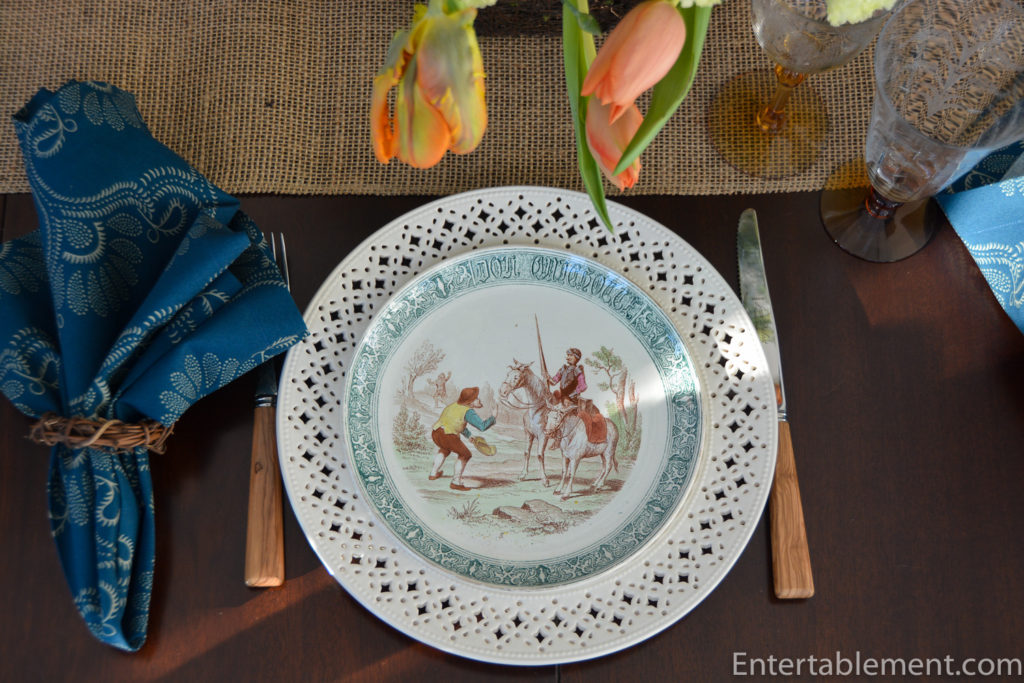 After one such fight, his inert form is returned to his home to recover, and while unconscious in his bed, his niece, the housekeeper, the parish curate and the local barber burn most of his books of chivalry. 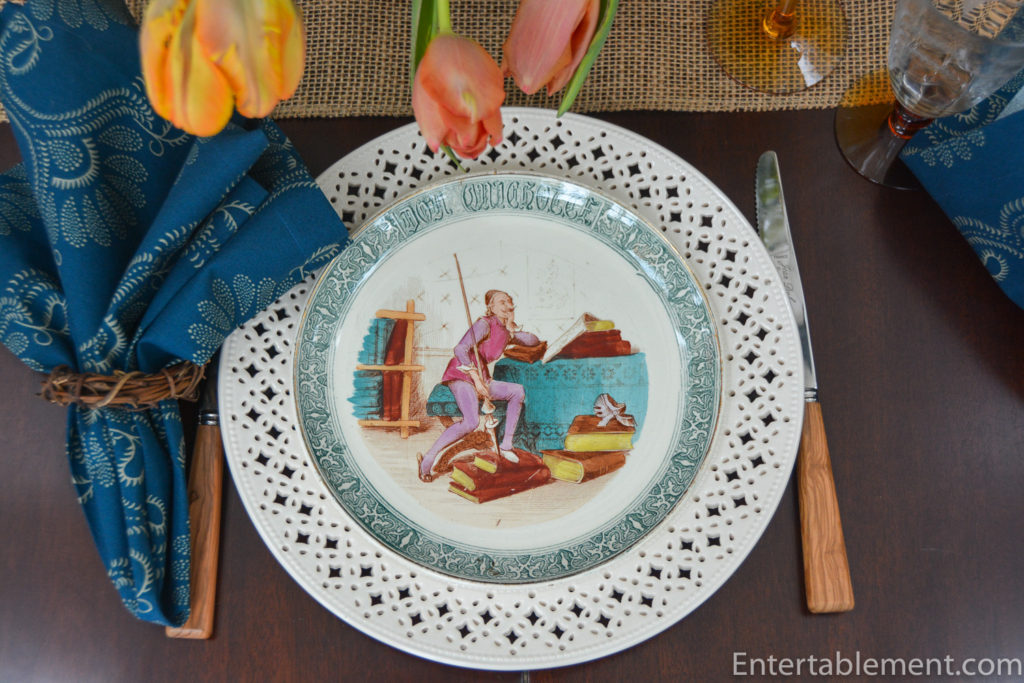 This seems to have little effect, however, as he’s soon off again on his adventures. Quixote and his faithful henchman come across an entourage of waggoners transporting lions, a gift from the Governor of Oran to the King. Quixote orders the waggoner to open the cages and drive them out so he can fight them. 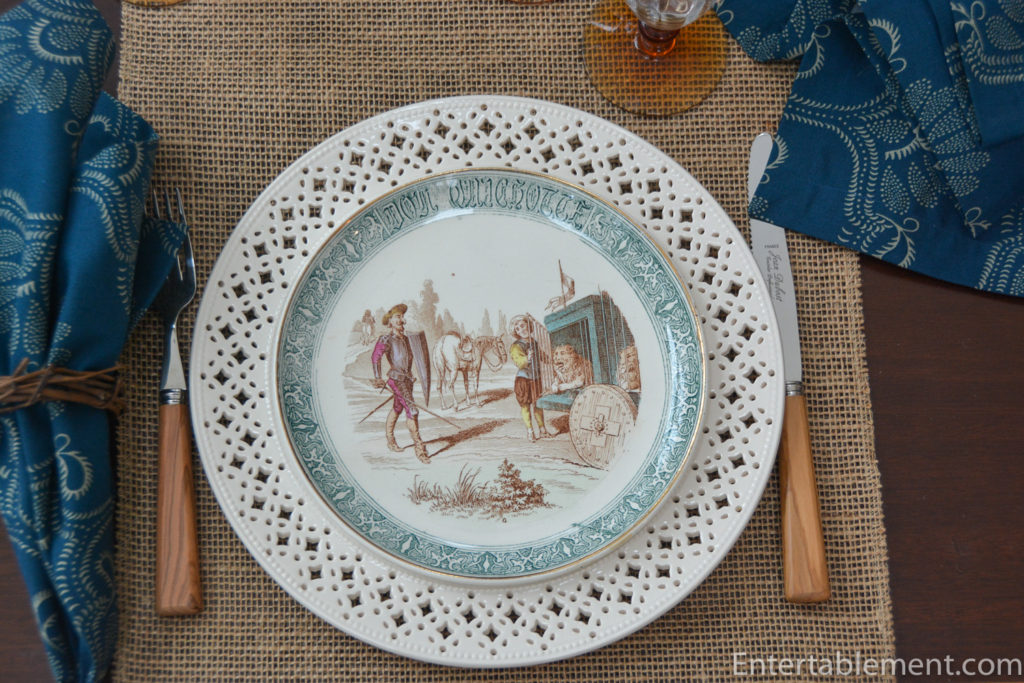 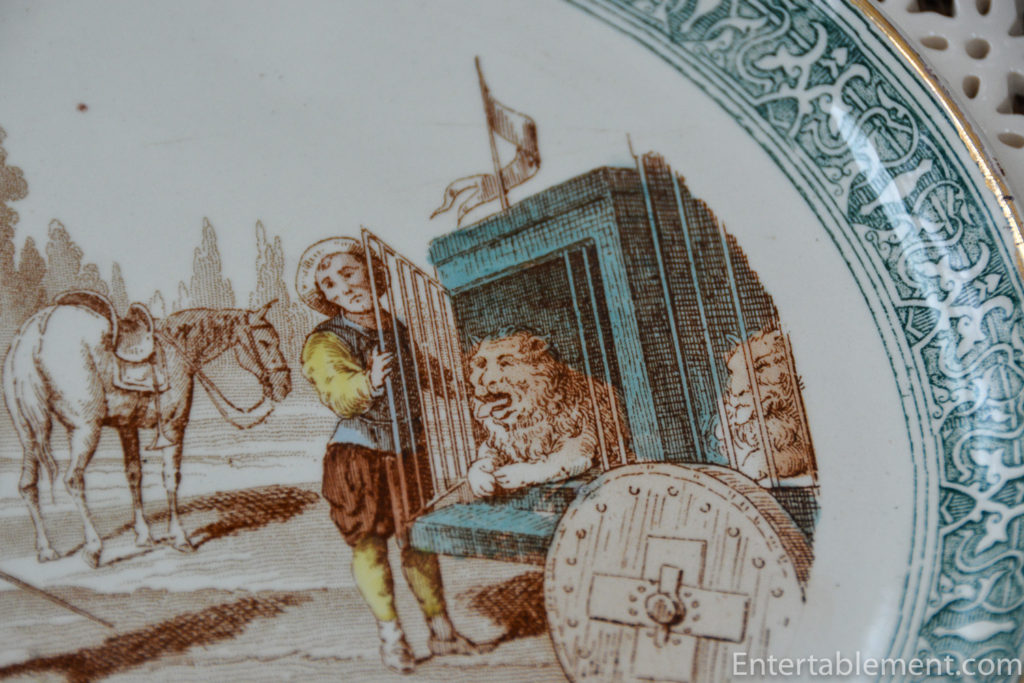 The novel concludes with Don Quixote returning home to his village, whereupon he falls very ill and dreams. Upon awakening, he has recovered his sanity, renounces his chivalric ambition and apologizes for the harm he has caused. He dictates his will, including a provision that his niece will be disinherited if she marries a man who reads books of chivalry. 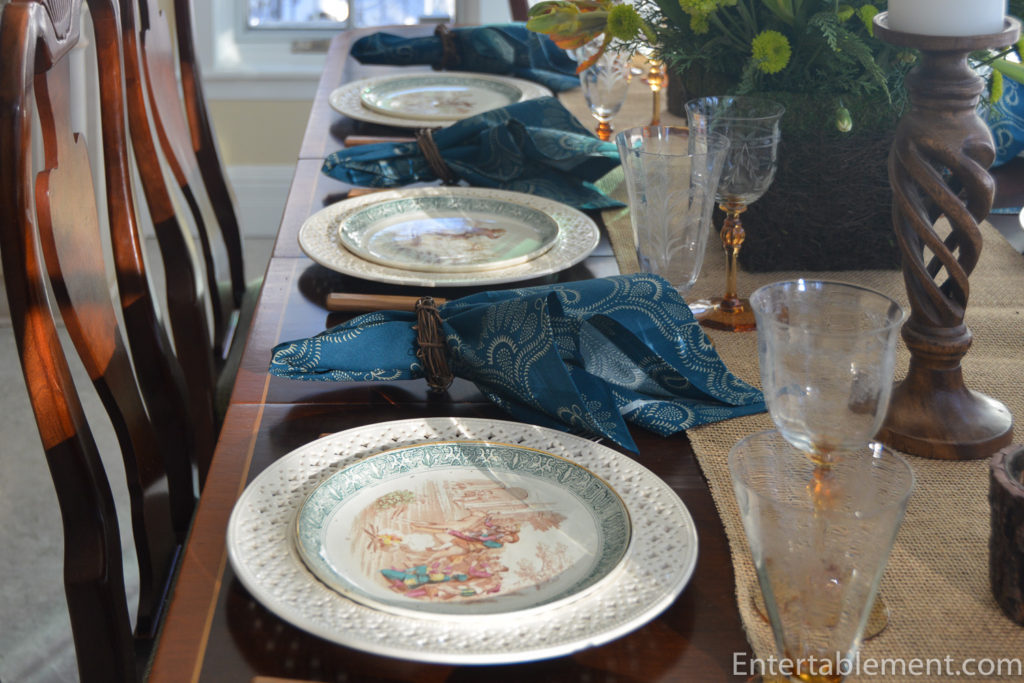 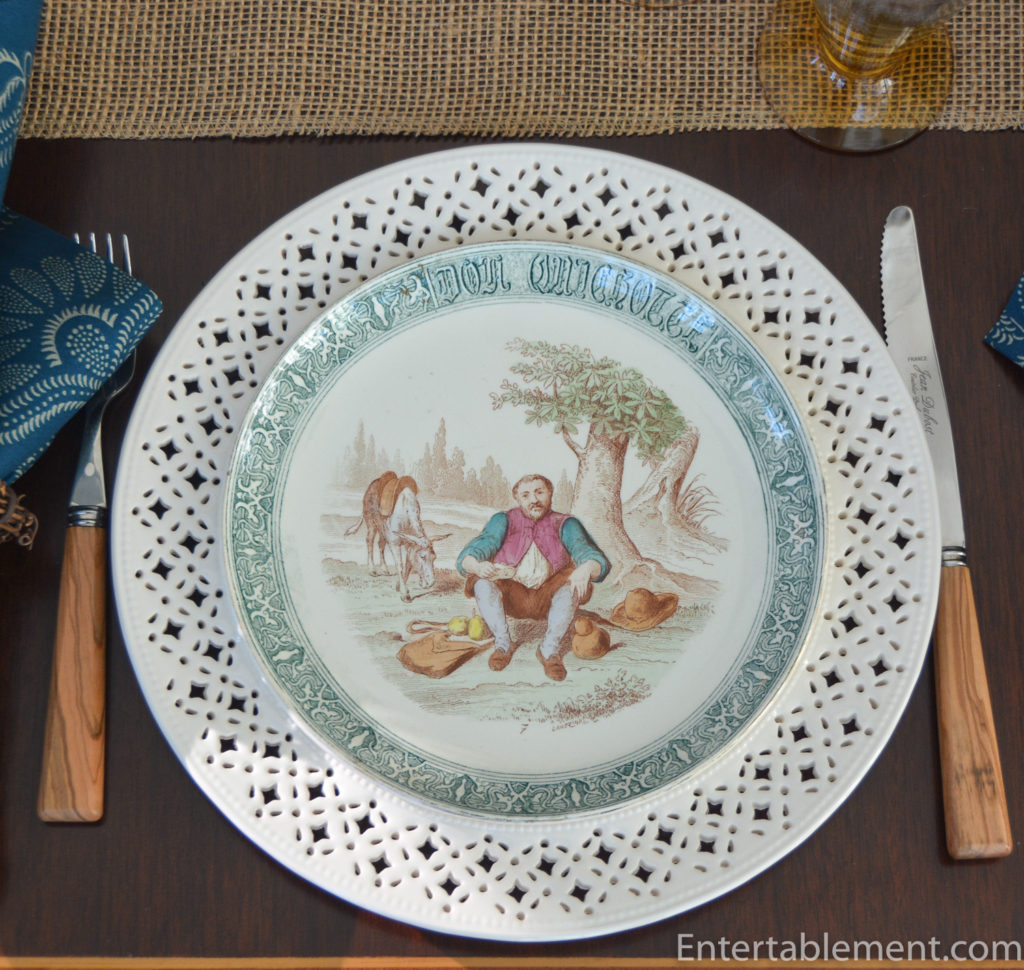 We shall leave Don Quixote to his recovered sanity and go on to the table. 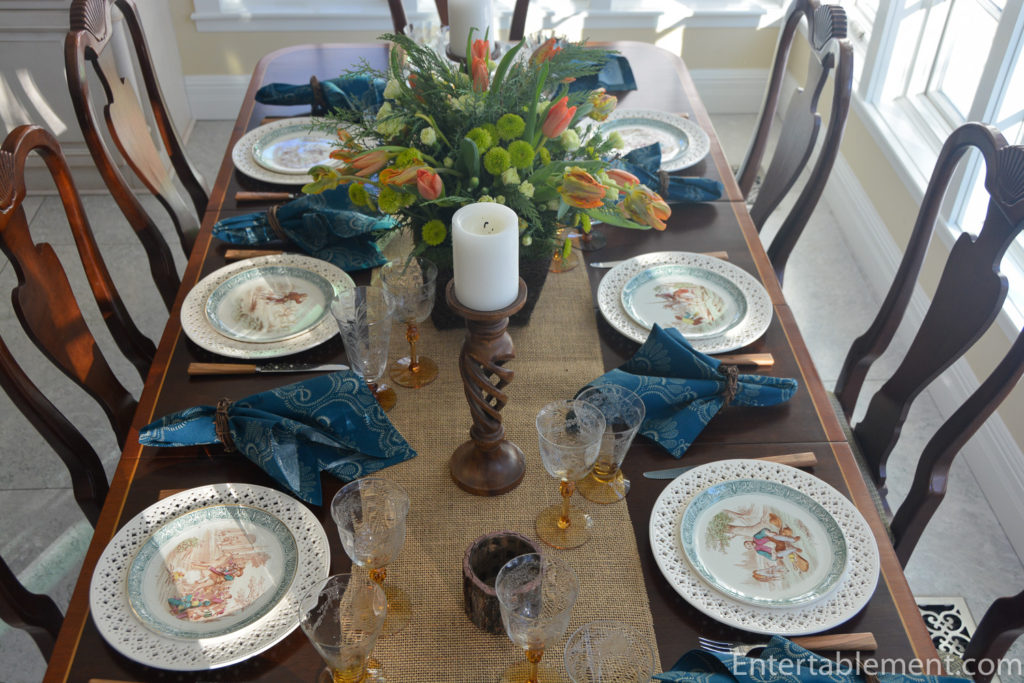 The Quixote plates are antique French Faience by Casemene, a short-lived French manufacturer. There are twelve plates in total and I have managed to snag eleven on eBay – the twelfth plate is elusive. The border is actually green, though it “reads” much more blue. 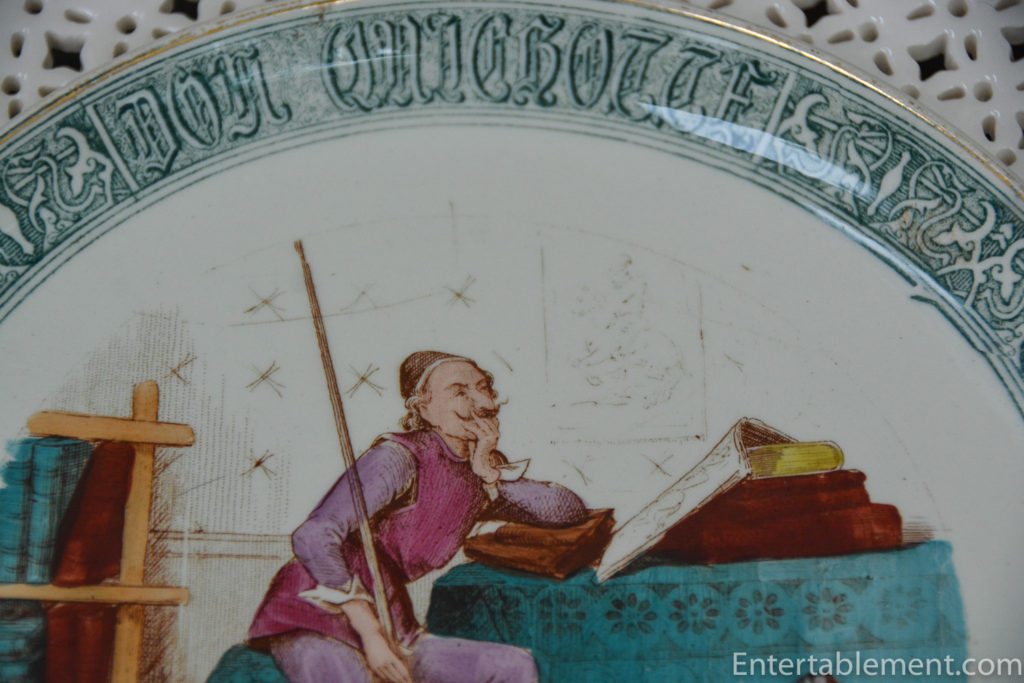 See what I mean? I styled them with Victorian blue napkins from Williams Sonoma a few years ago. 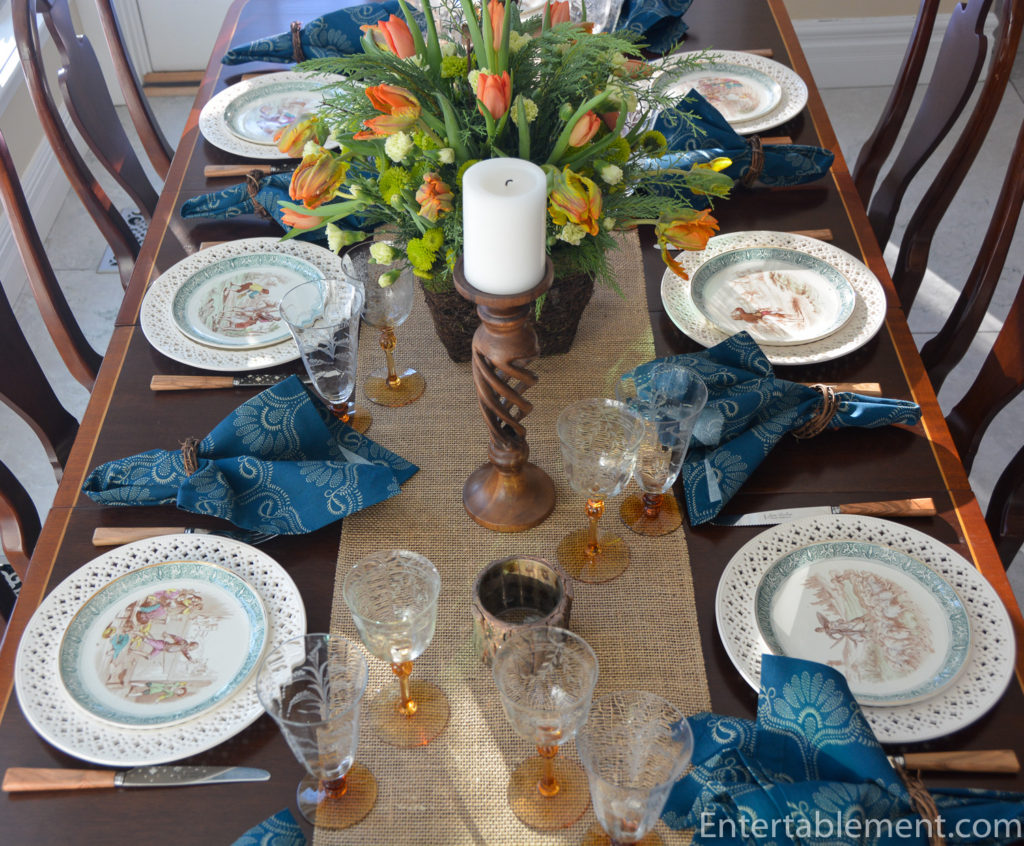 I tried green napkins in various shades and it just didn’t work. 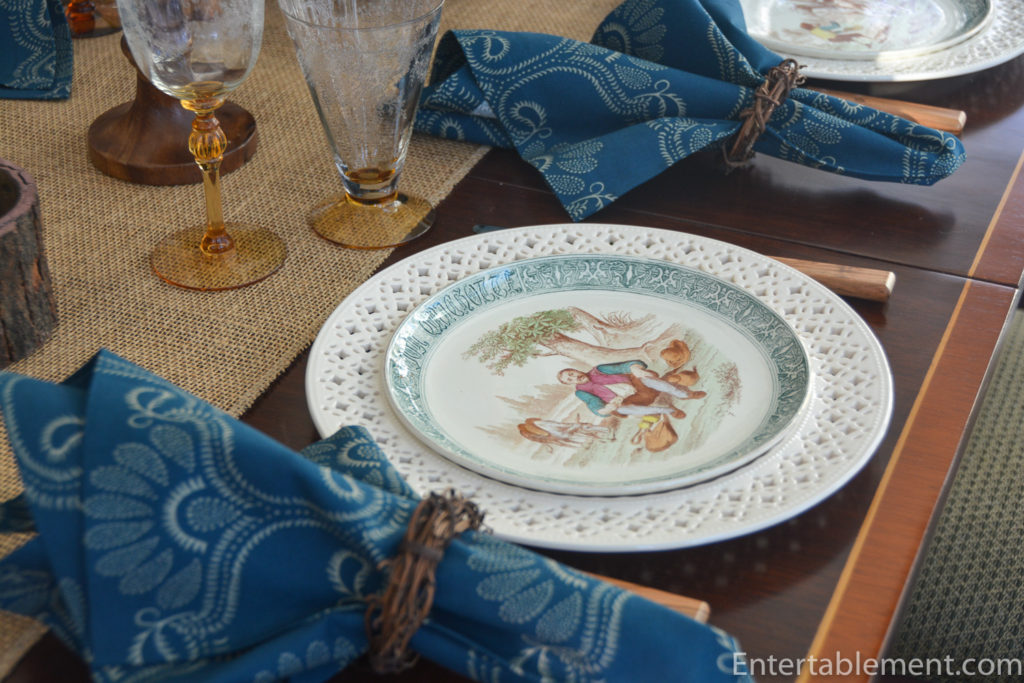 The natural greens of the flowers were fine, and I used orange parrot tulips for a bit of oomph. 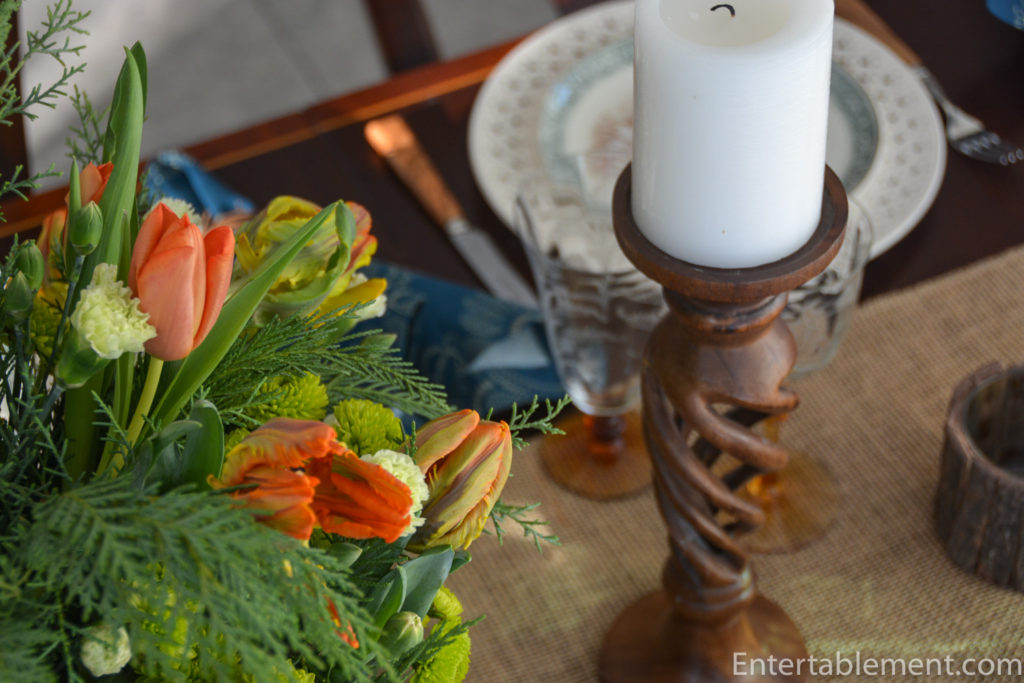 They seemed to work with the bronzey orange-brown tones that form the background of most of the illustrations. 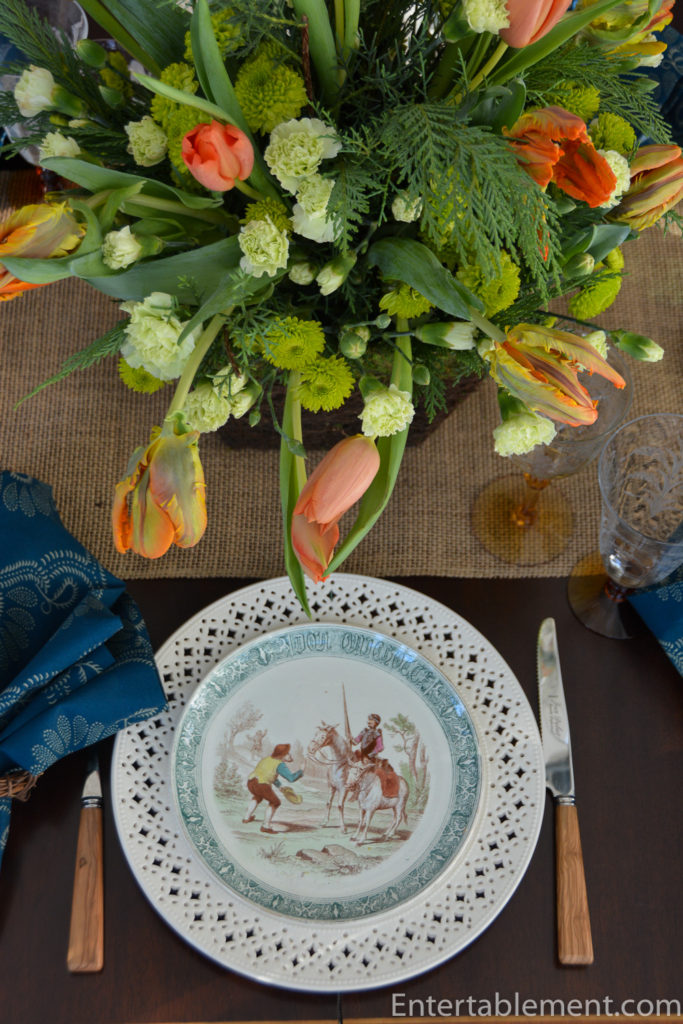 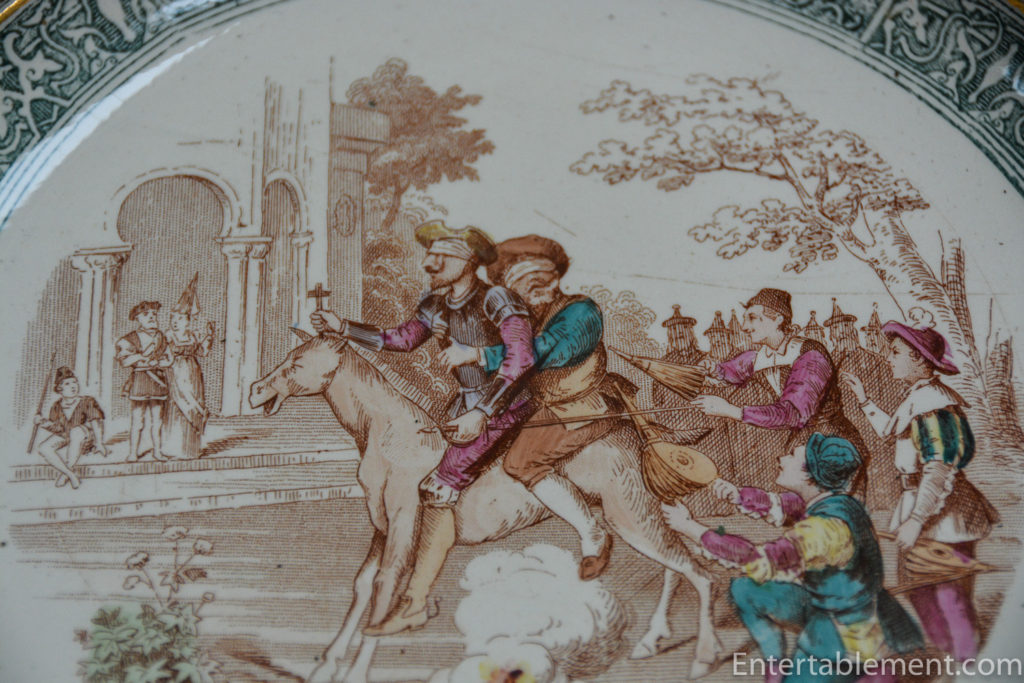 Having figured out the blue napkins, I carried on with the natural tones in my motley collection of Amber Stemmed Depression glass, mostly Morgantown Pattern 7617, with two different etchings… 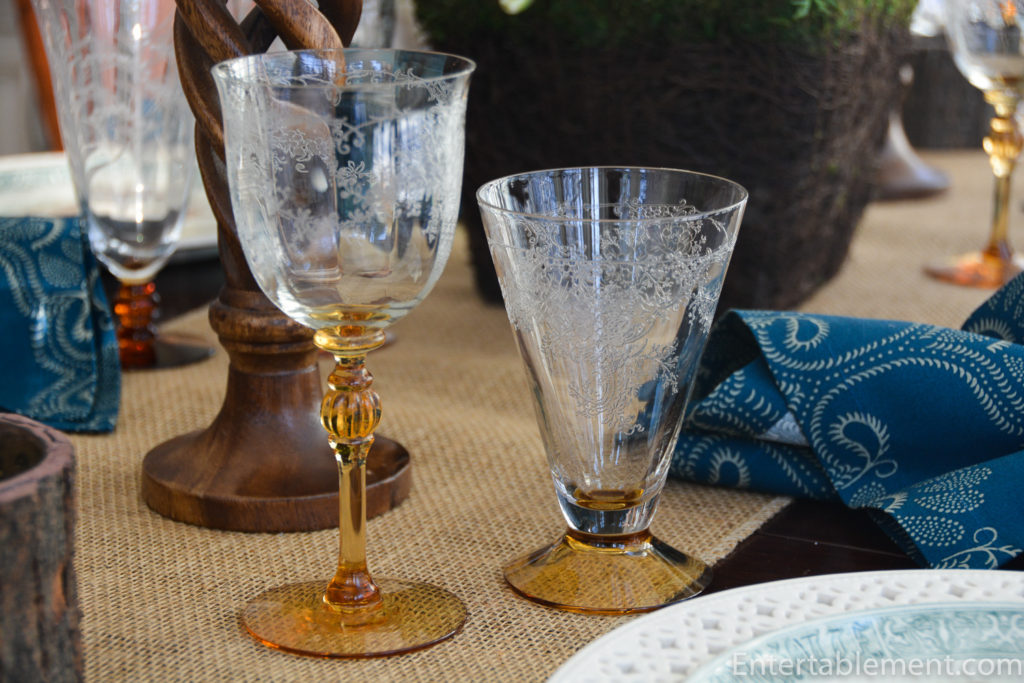 …and Tiffin Franciscan pattern 15003.iced tea glasses on the right, below. 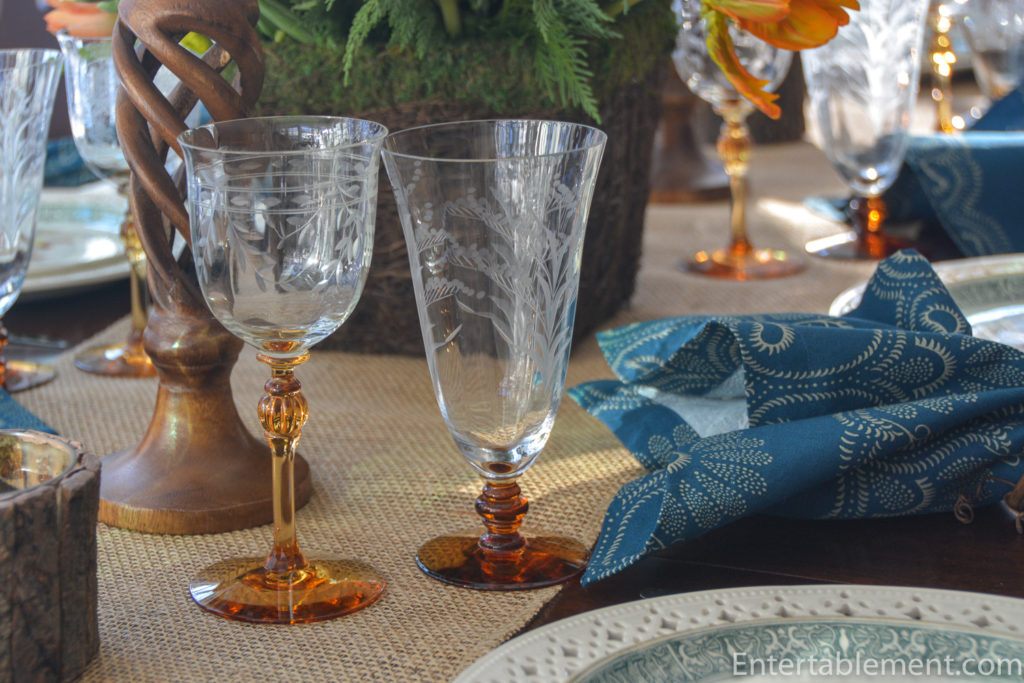 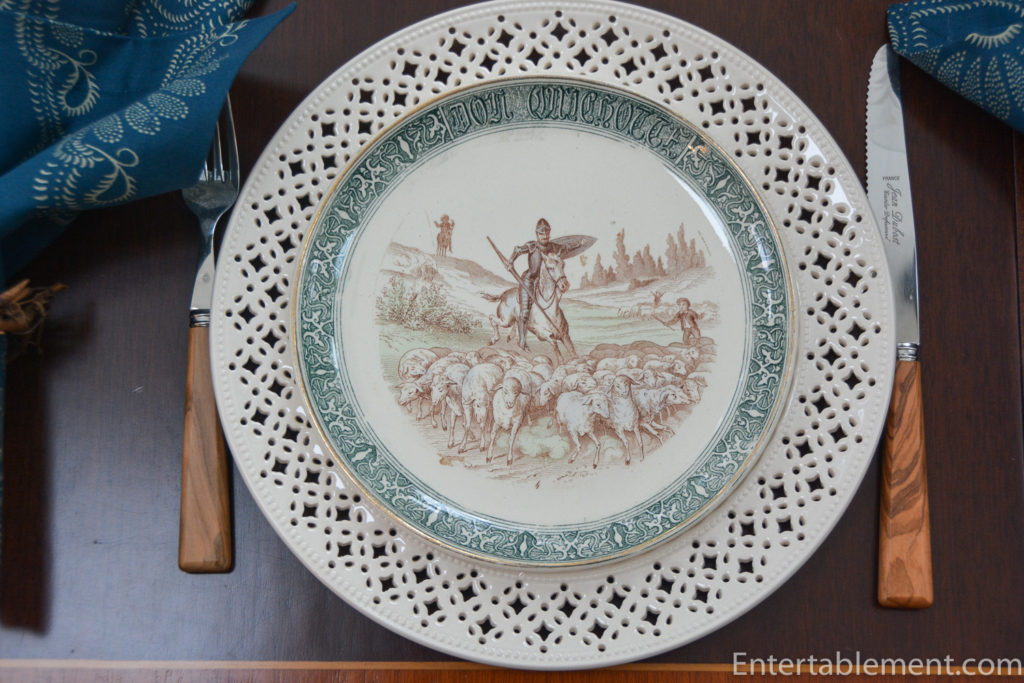 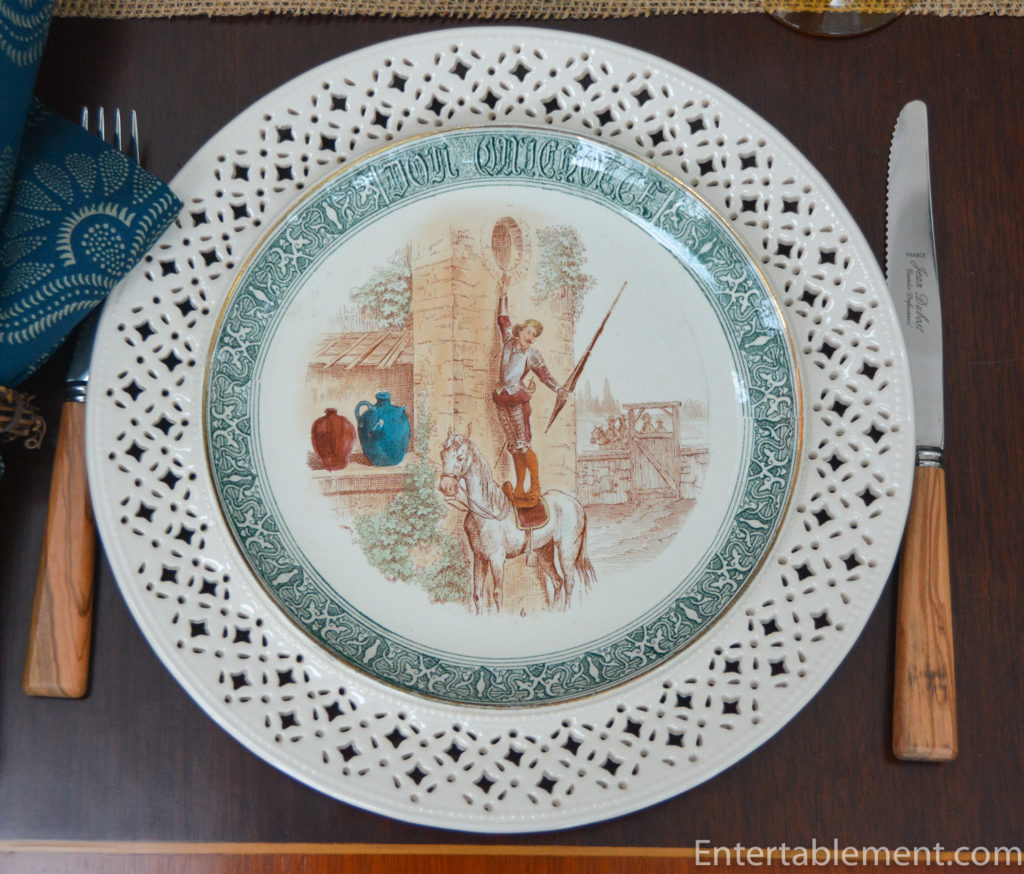 Thanks for joining me on a Quixotic journey today!