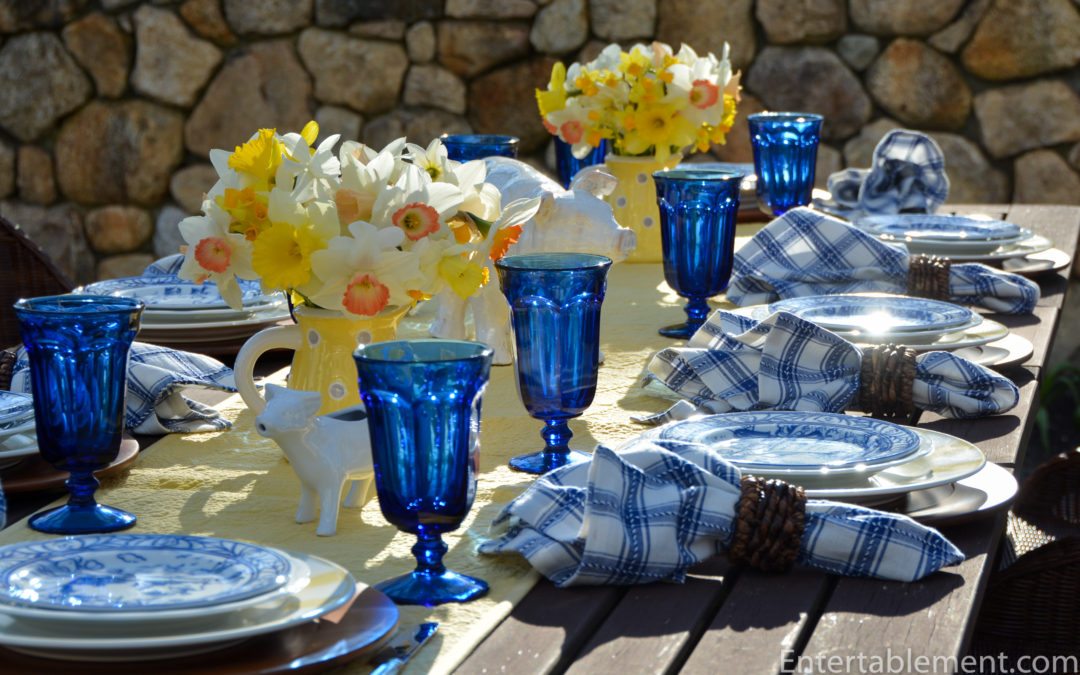 Ducks, geese, roosters, sheep, pigs and cows. And daffodils, lots and lots of daffodils. It’s spring on the farm! 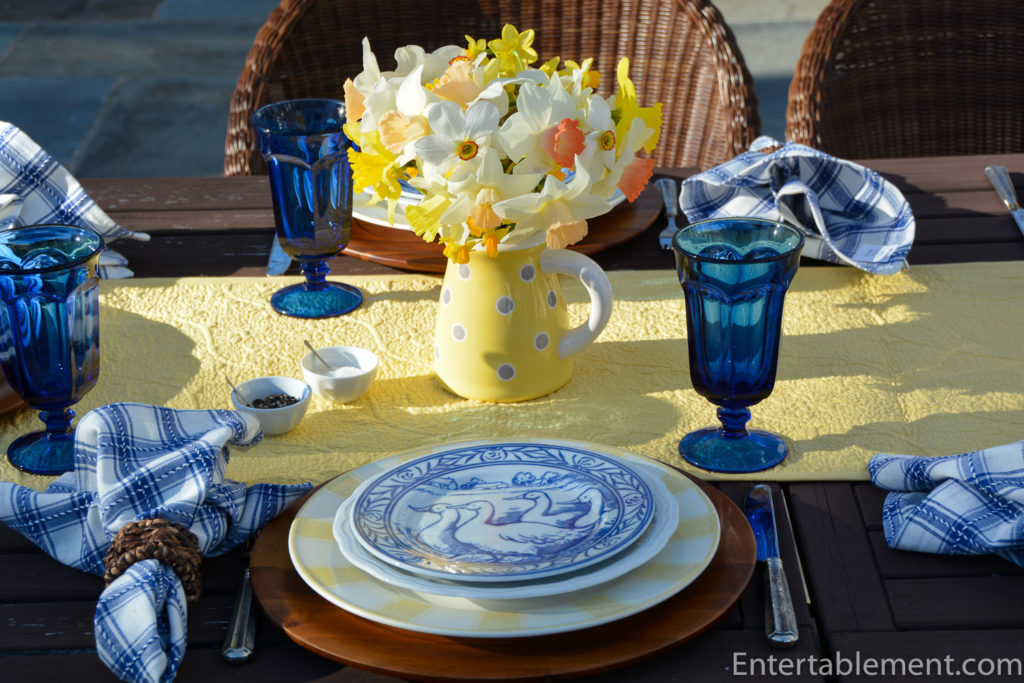 Brittany by Williams Sonoma renders beautiful depictions of our farmyard friends in classic blue & white. My duck-devoted granddaughter, Juliana, would be particularly enthralled with this plate with its numerous ducks! 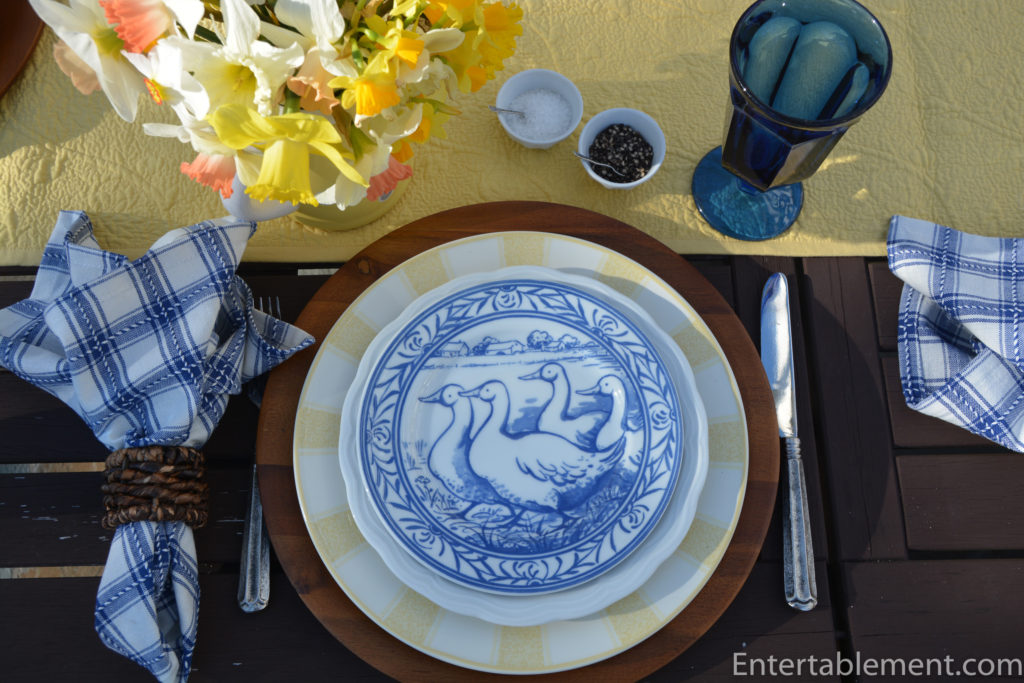 It was amusing to collect the farm-themed accoutrements to set this table, including the cow creamer, reminiscent of the infamous cow creamer featured in The Code of the Woosters by PG Wodehouse, though the one that featured in the Bertie Wooster/Jeeves plot was silver, not ceramic. 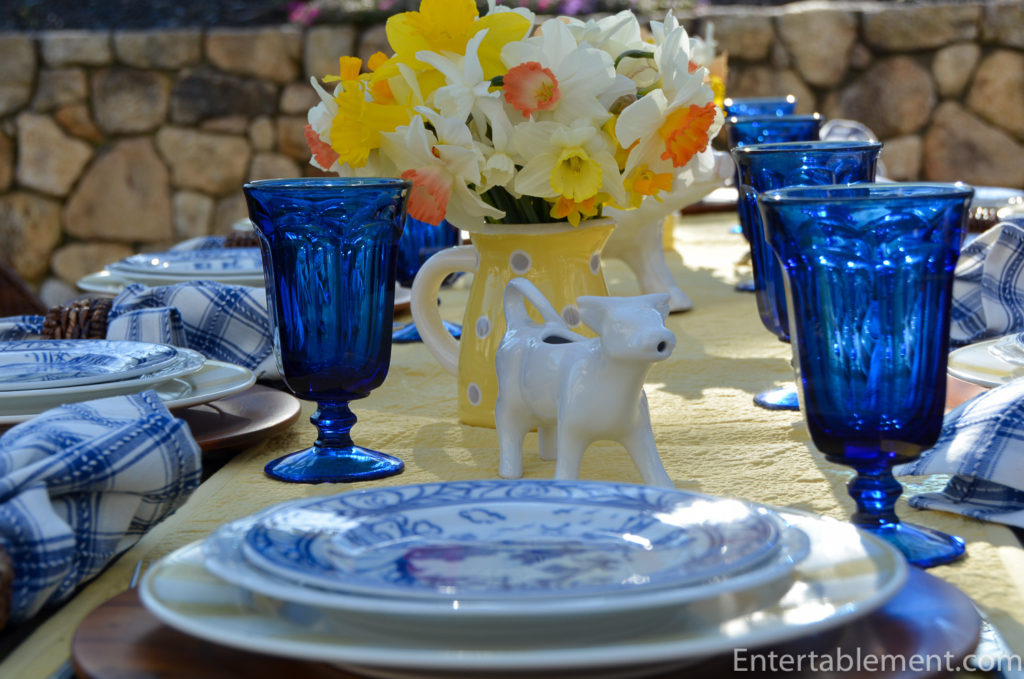 The white ceramic cow creamer, the pig centrepiece and the yellow jugs holding the daffodils came from Homegoods one lucky day. 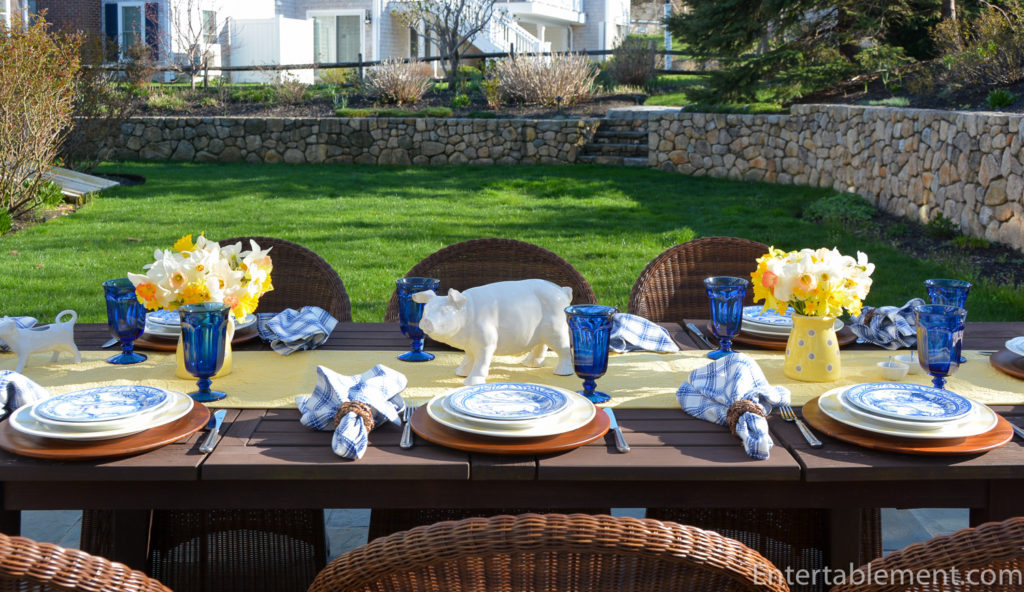 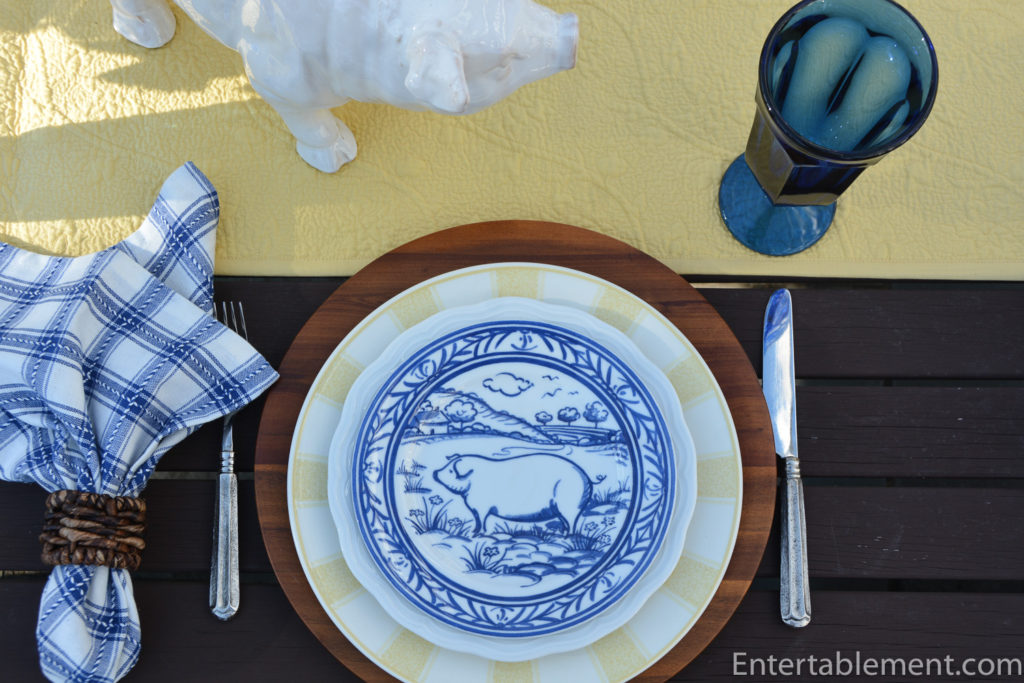 It was a glorious day last spring when I shot these photos. The light was so bright it hurt the eyes, but oh, so welcome! 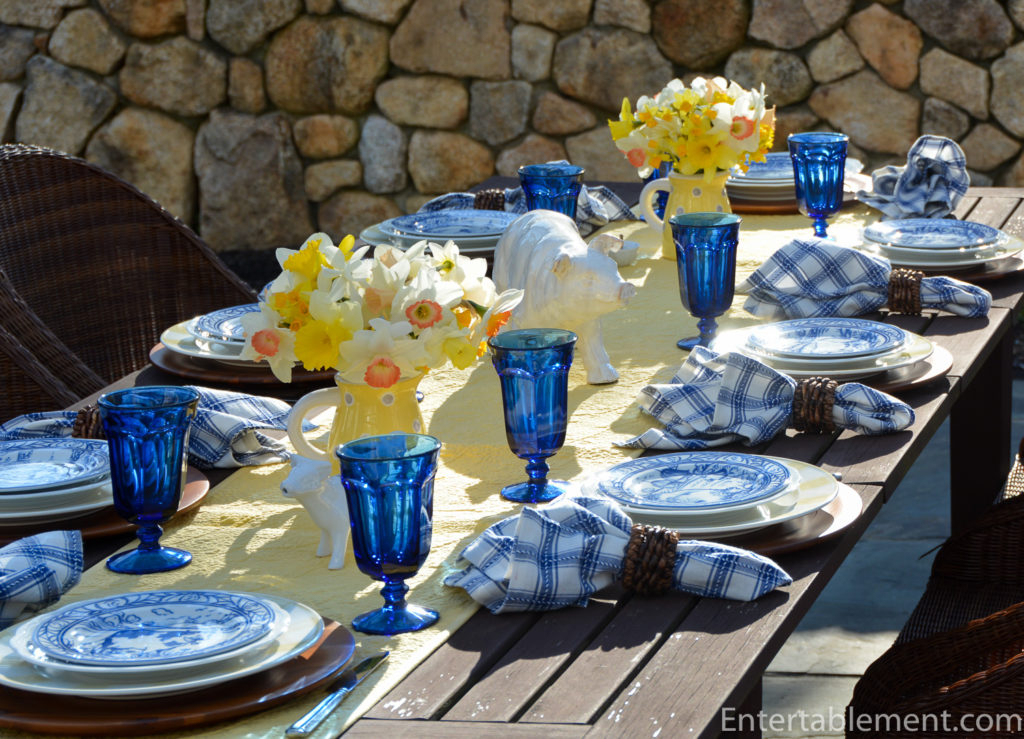 A riotous selection of daffodils, white and yellow, were there for the taking. They were all from my garden in the Cape, where daffodils abound in the spring. It has to be the most perfect climate for daffodils because they are everywhere along the roadsides, in gardens, pots and naturalized in fields. 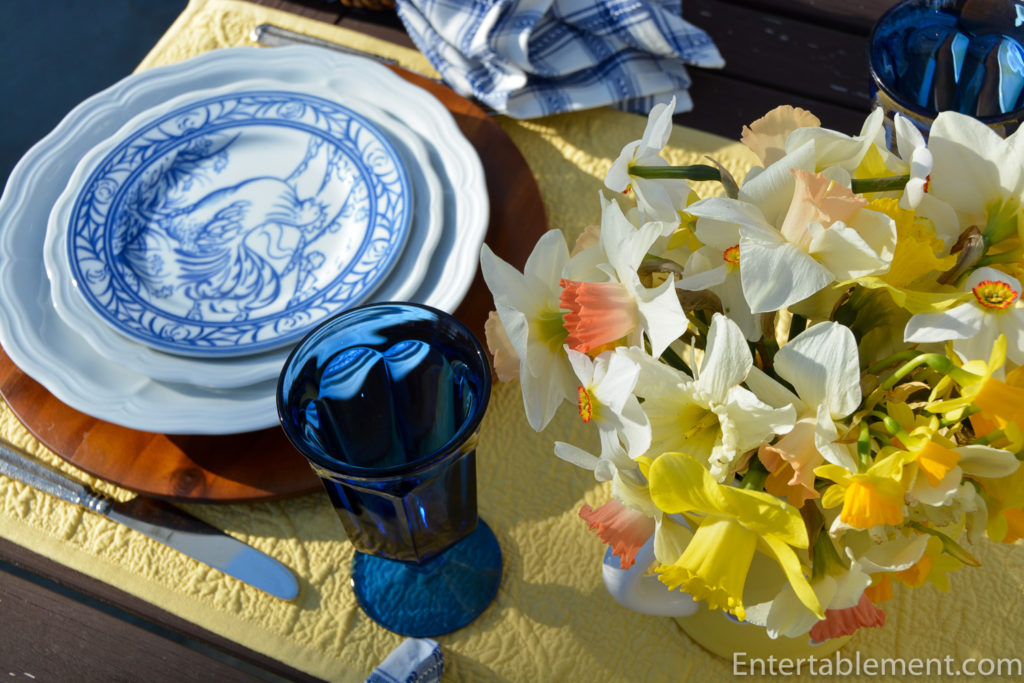 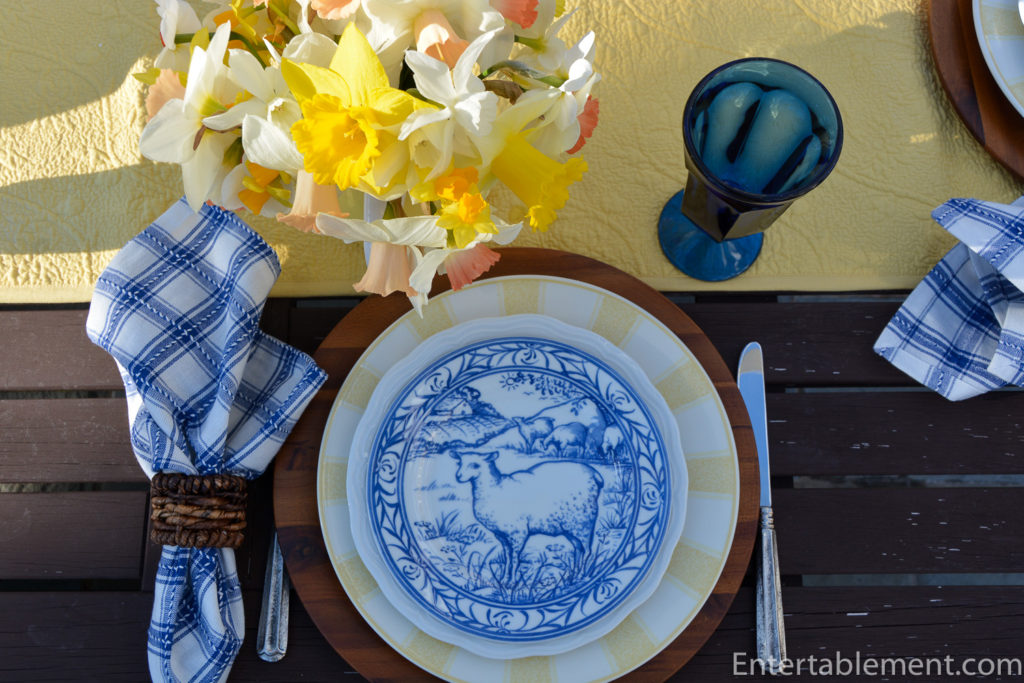 With the blue and white theme decided, and daffodils taking centre stage, the rest of the table came together easily. More blue came in with the napkins from Pier 1 from a few years ago and the vintage Old Williamsburg Blue Deep Ultra iced tea glasses by Imperial Ohio from Replacements. The rattan napkin rings were from World Market. 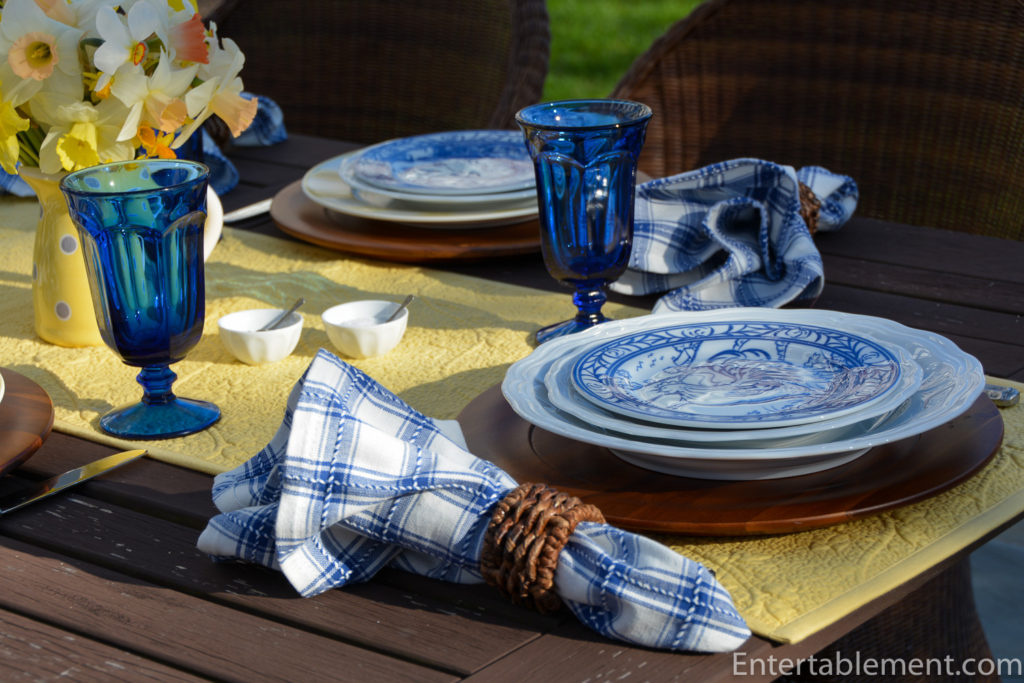 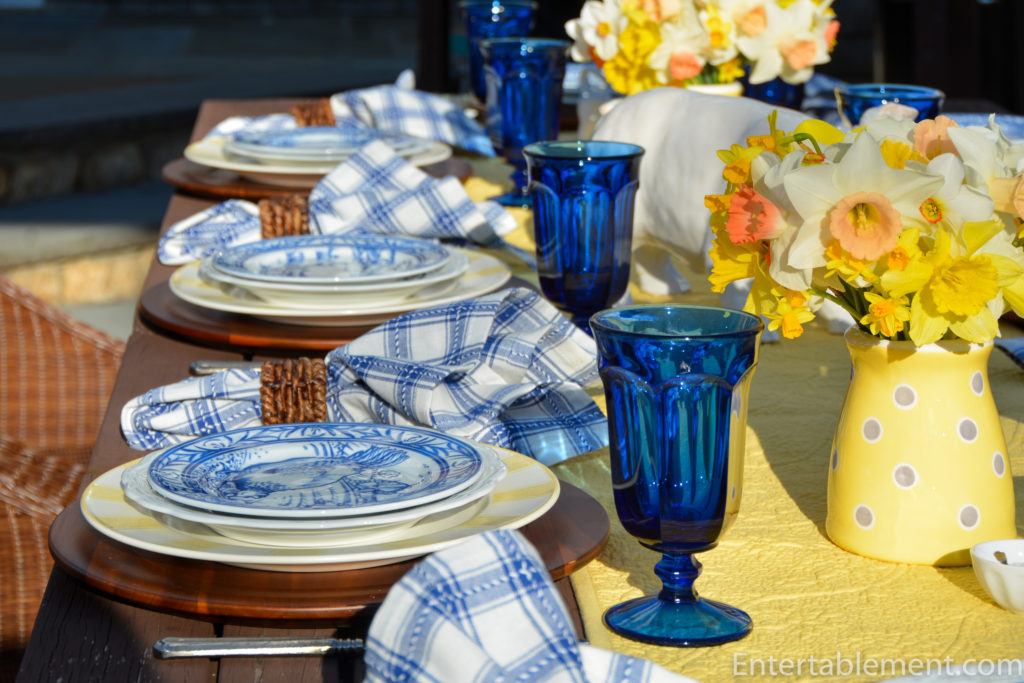 The plate stack begins with the Acacia wood charger; I got two stacks of six from Amazon several years ago at a very good price, but they’re no longer available, and I haven’t been able to source a comparable deal for you, unfortunately. 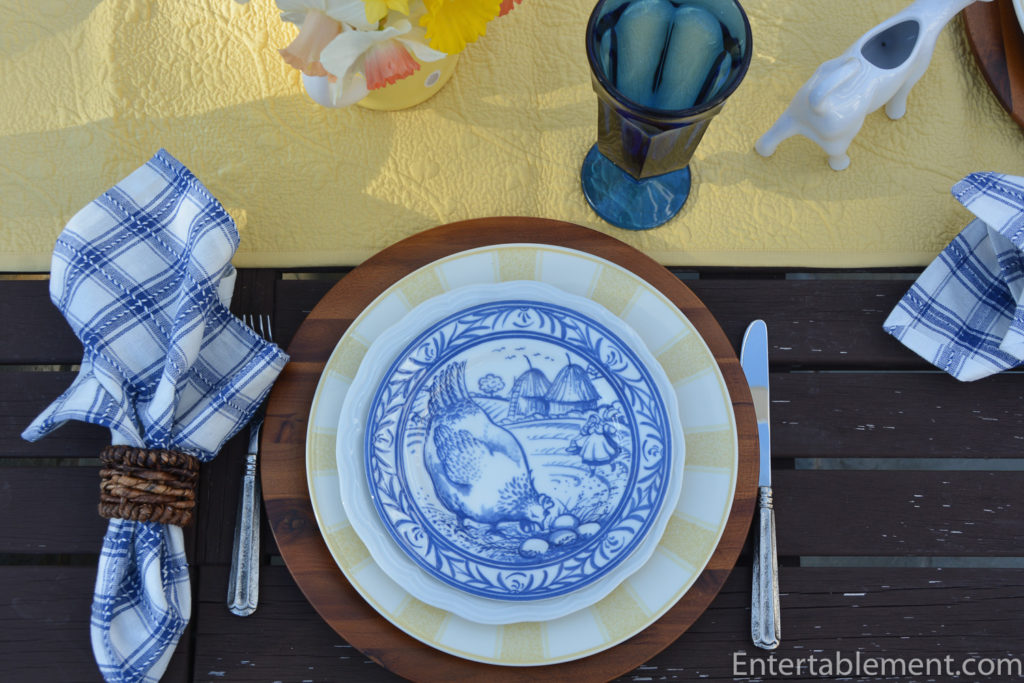 The dinner plate is Broadway Yellow by Mikasa, topped with a Queen Anne salad plate by Pillivuyt and finally the Brittany salad plate by Williams Sonoma. 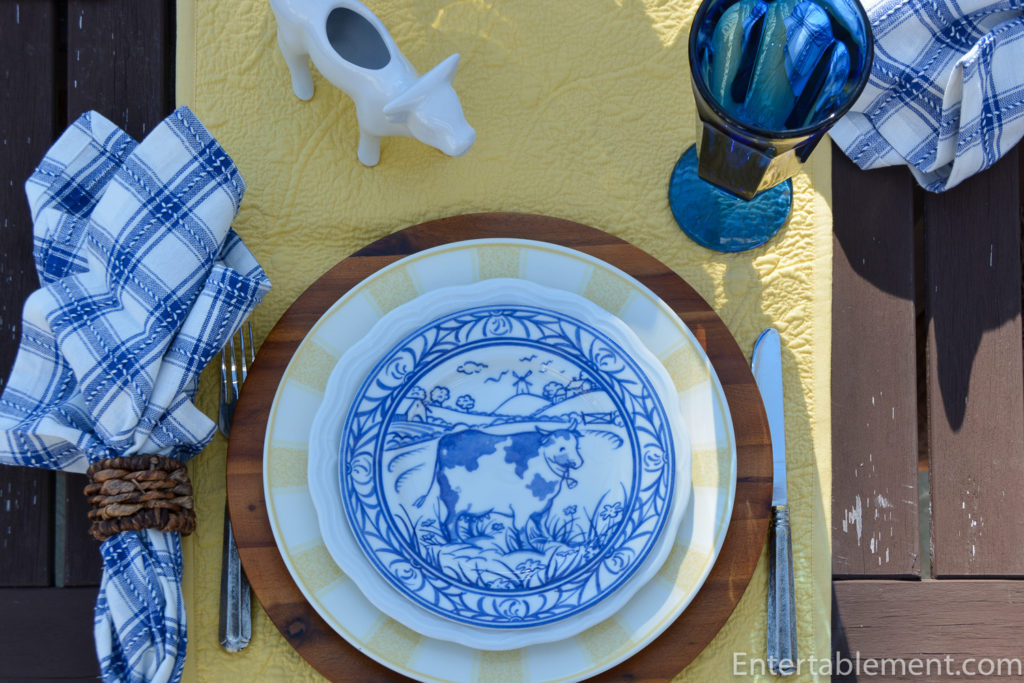 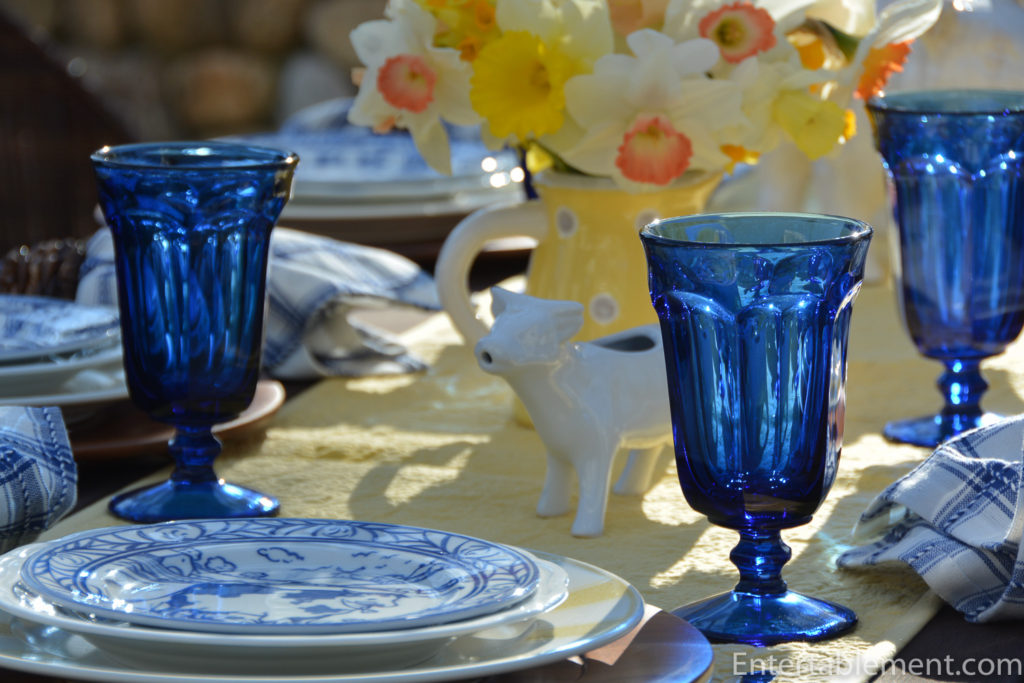 Oh, glorious spring! We are currently in England, enjoying similar beautiful weather and abundant daffodils. We’ve visited several country houses including Upton House, Syon Park, Broughton Castle, Basildon Park, Hidcote and Harewood House. I’ve also filled in several more blank spots on my Cathedral Quest to photograph all 42 Anglican Cathedrals in England. I’ve now done 32 – only 10 more to go. I’m itching to finish, but also want to go back and rephotograph some of my earlier efforts as my photography skills have improved in the six years since I unwittingly began this project.

Glenn has done yeoman work on the driving front, though I think I pushed the boundaries of marital tolerance this week when in one day we toured Derby Cathedral (impeccably maintained, fairly modern and cohesive), the Richard III Visitor’s Centre and Leicester Cathedral (a bit disjointed to make room for the Richard III tomb), the remains of the old Coventry Cathedral (utterly heart rendering, especially in light of this week’s tragedy at Notre Dame) and the new Coventry Cathedral (a disturbing example of a modern cathedral built to replace the old). I give you Coventry Cathedral’s baptismal “font”. Yes, it is a wooden planter lined with plastic, fastened by rivets, all resting on a plastic gym mat. Enough said. 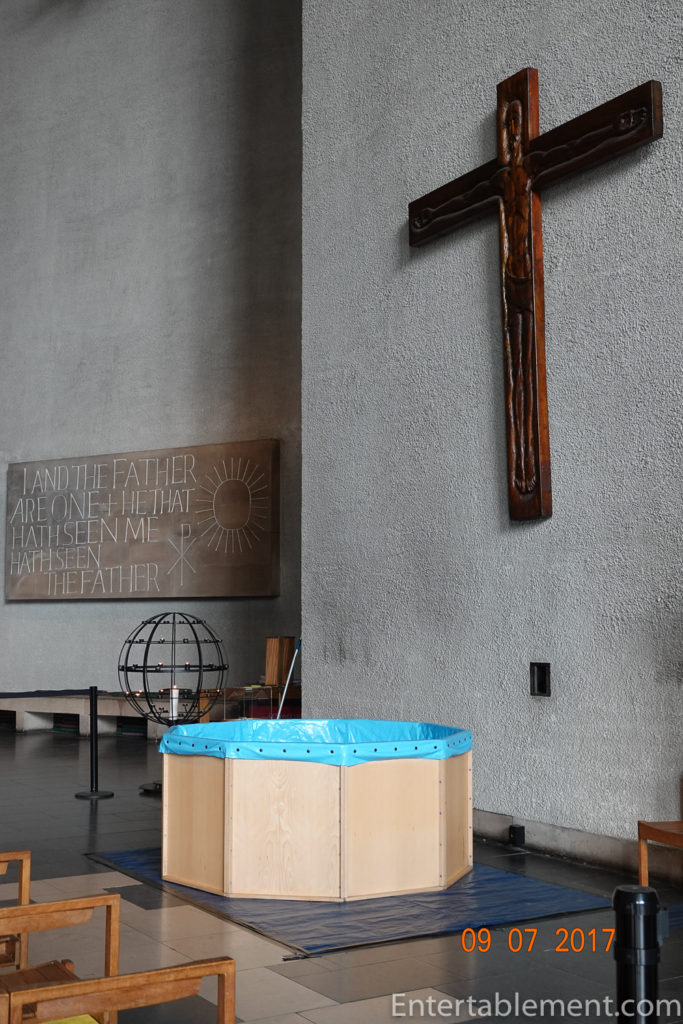 On a happier note, here are a couple of shots from Syon Park to whet your appetite. 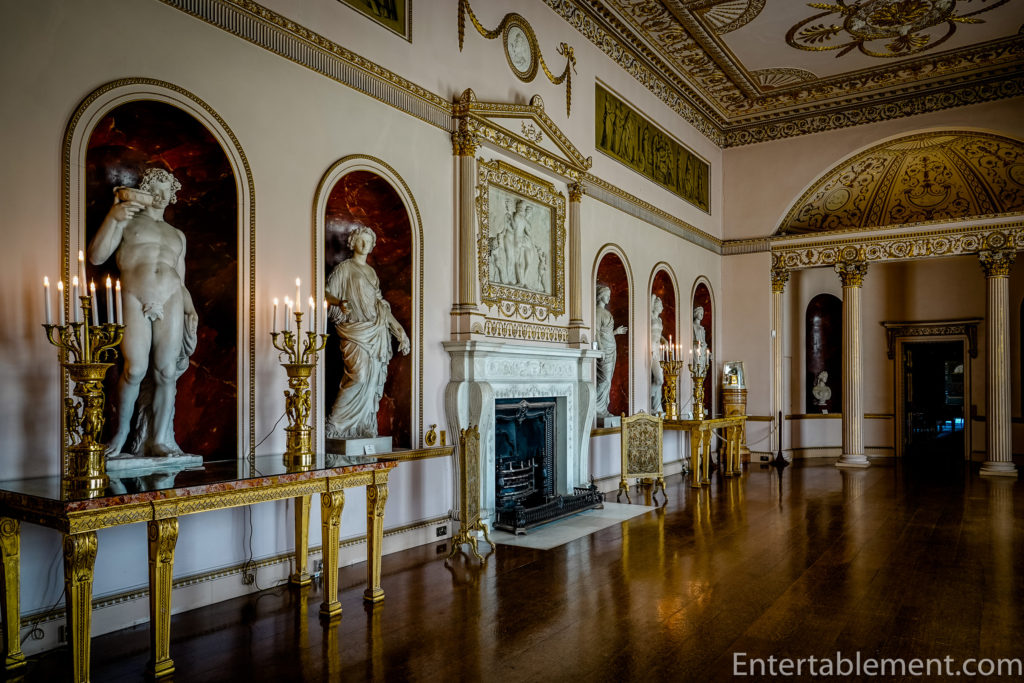 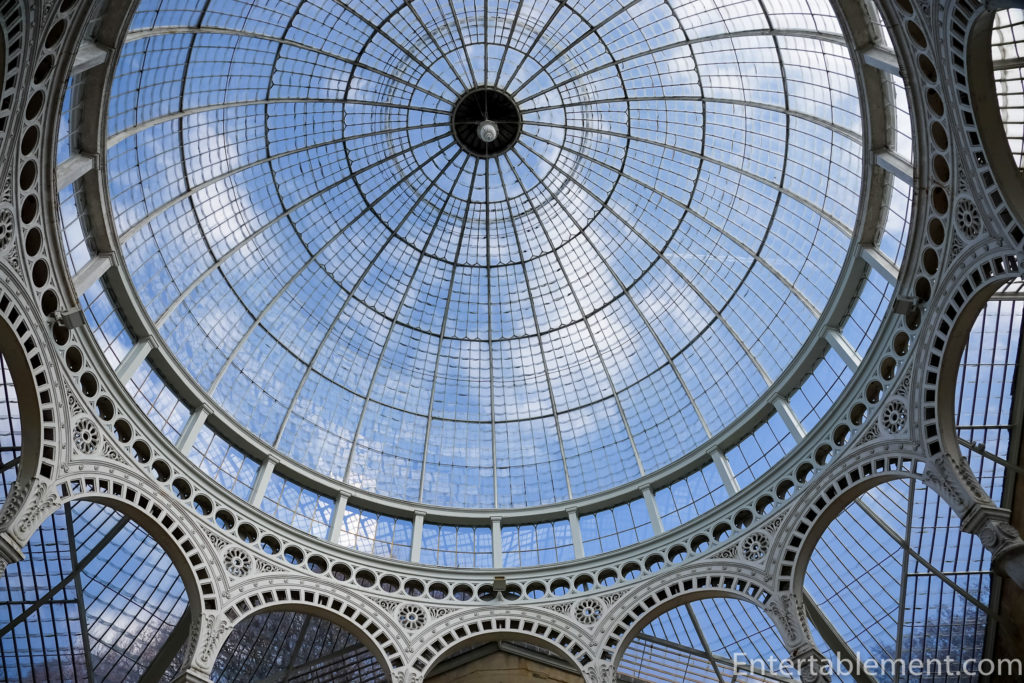 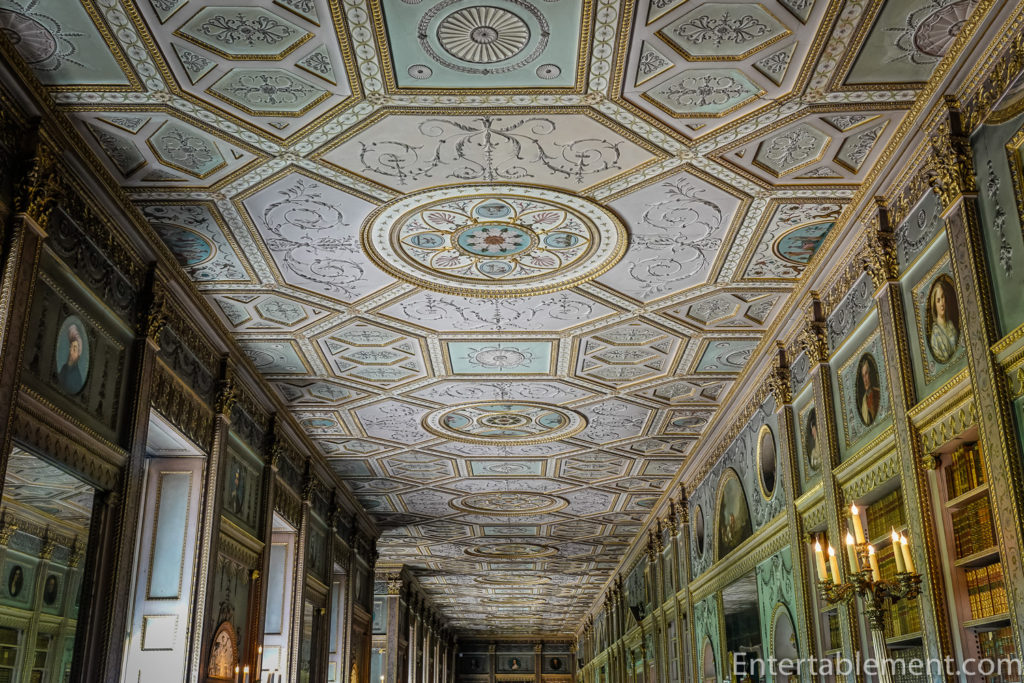 I discovered yesterday that I had somehow switched on the “Write Date” option switched on the camera, so I have an unsightly bright orange date stamp emblazoned across the bottom corner of over 800 photographs, which is going to take some ingenuity and a couple of apps to remove before I can process the photos and write up the blogs. Grrrr. Thank goodness this came to light before we got any further. It can be fixed.

I leave you with one more shot of Brittany. Happy Easter Weekend, everyone! 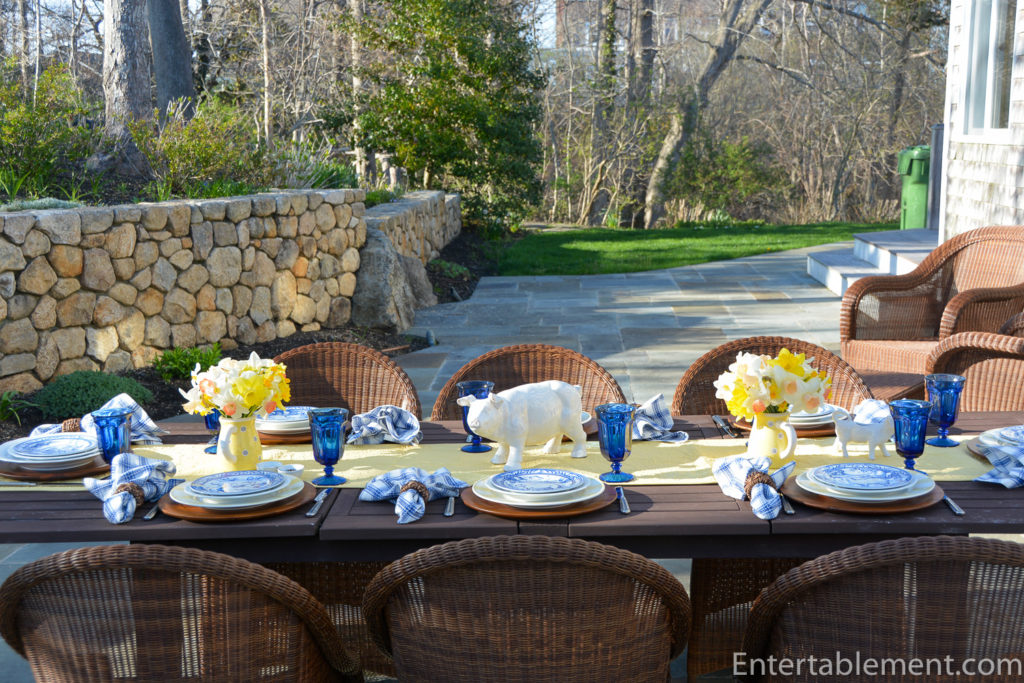