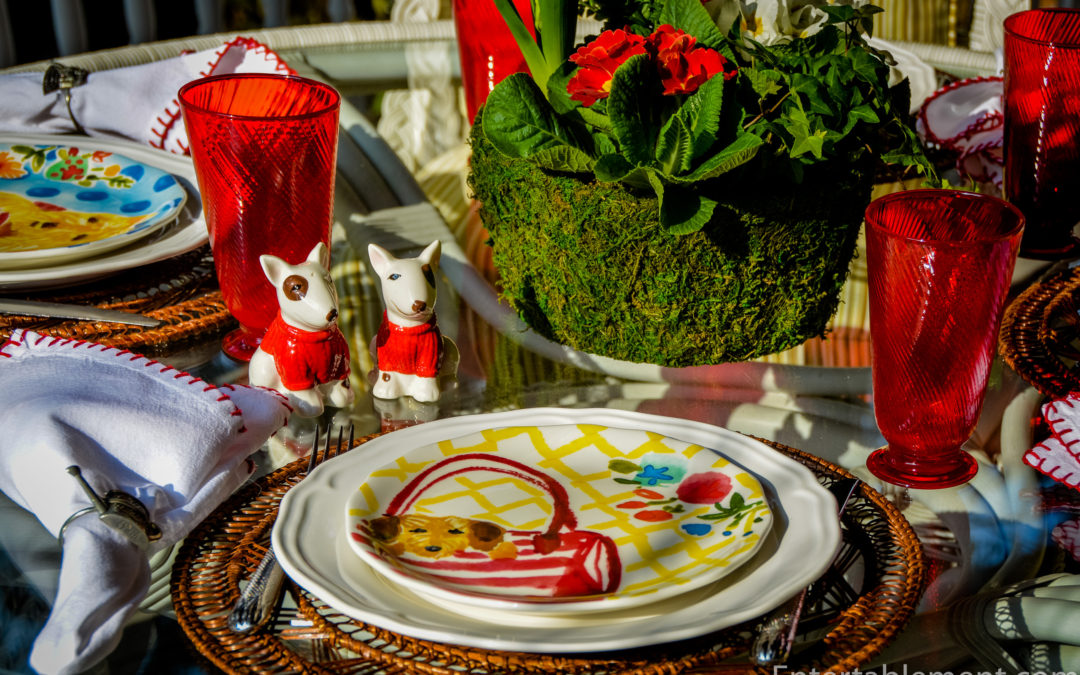 I don’t know who thought up this particular theme, but it made me smile. Pups and Handbags. Beats Dogs Playing Cards! 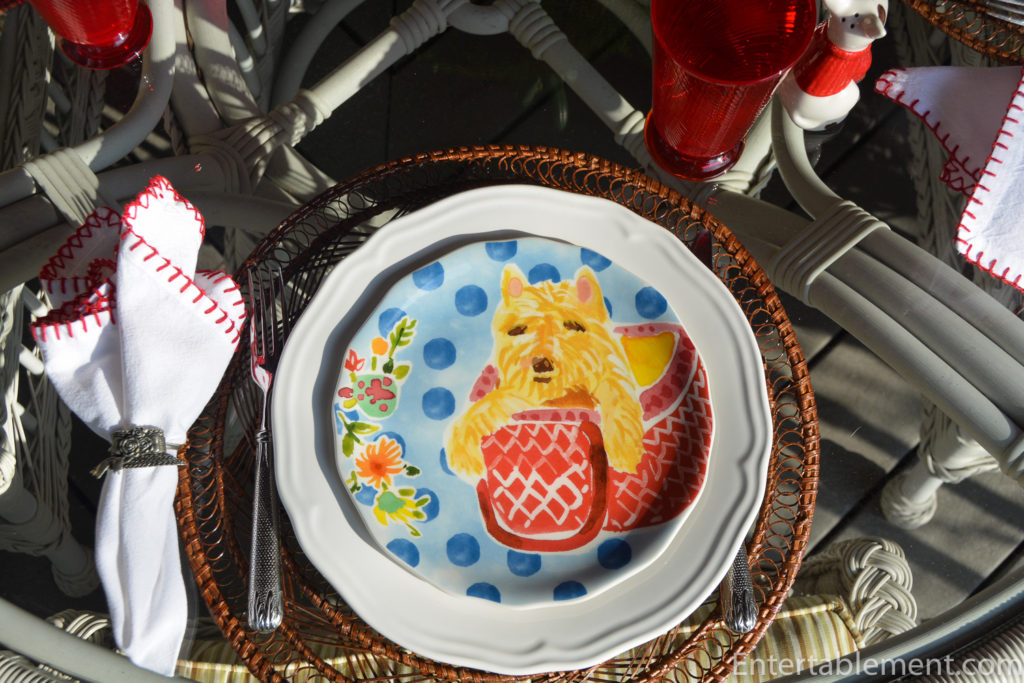 The four salad plates from Pier 1 are cheerful, colourful and downright silly. Perfect! Look at that little guy, sleepily gazing out. Is it time to get up? 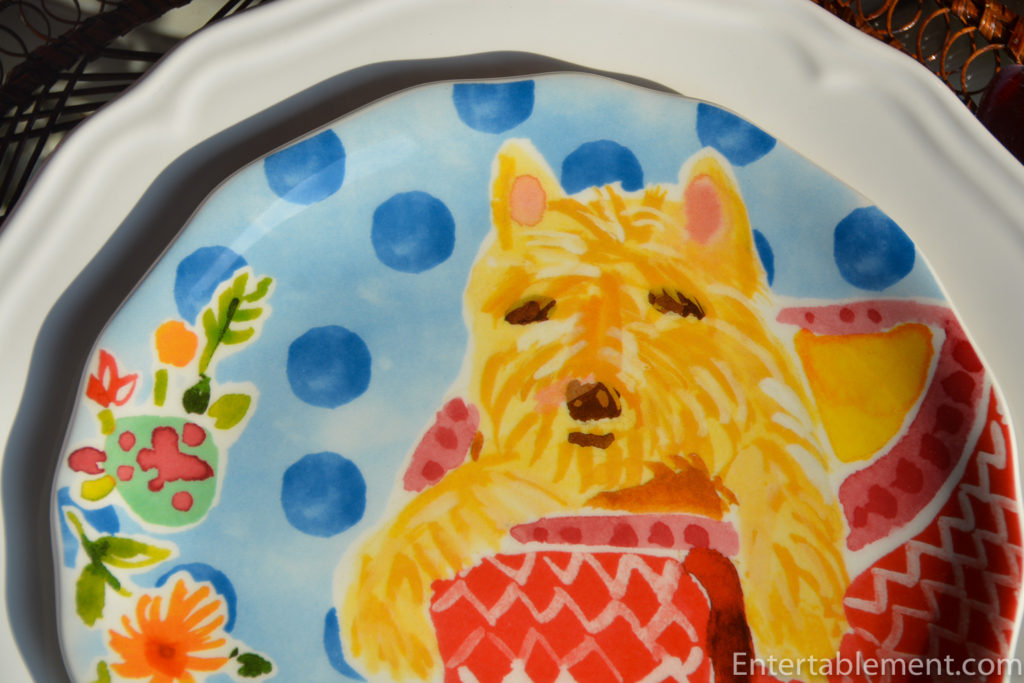 It was still pretty darn chilly outside when I set this table, but the bright sunshine and equally cheering blooms in the centrepiece spurred me on. 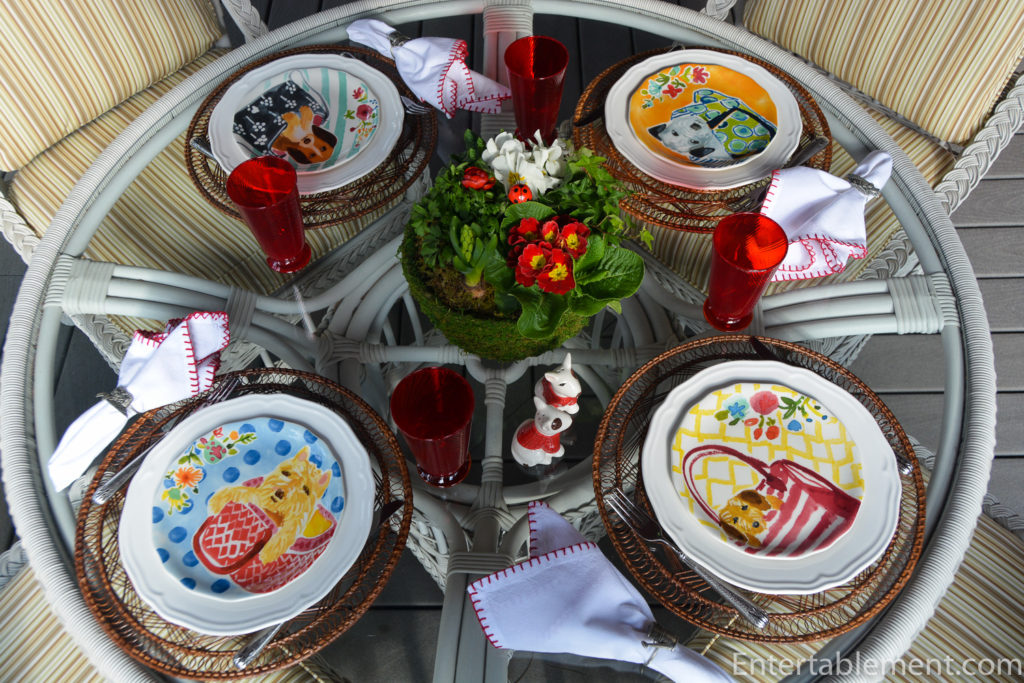 Hardy primula, some English Ivy and a hyacinth pushing its nose out of the soil were capped with a small ladybug. Sounds like spring to me. 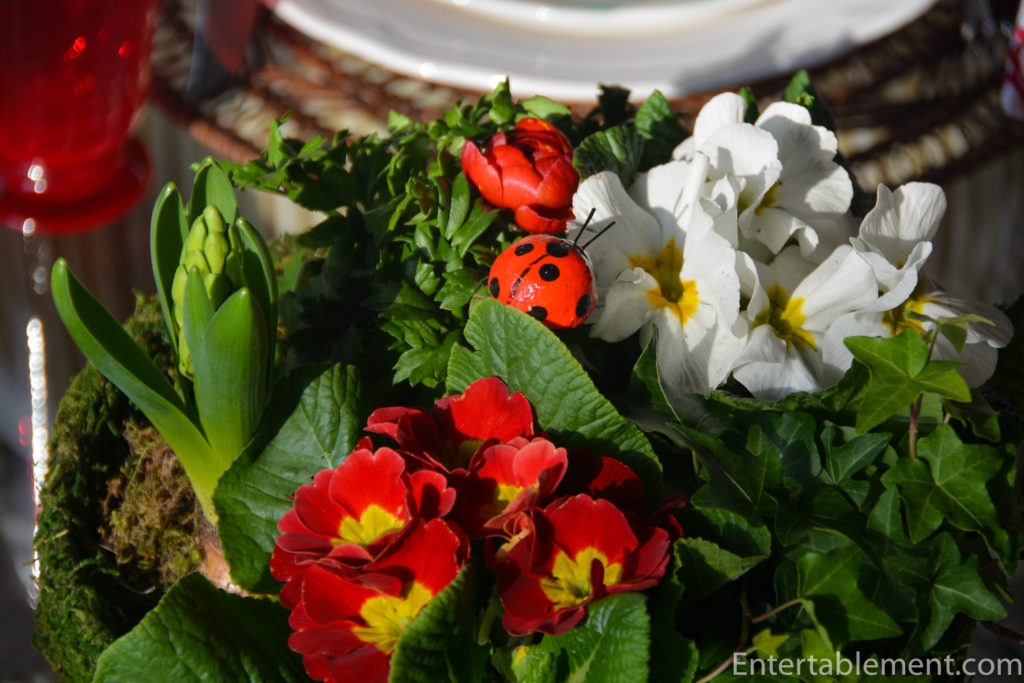 A set of dog-themed salt and pepper shakers from World Market a few years ago joined in the fun. Their bold red sweaters fit right in. 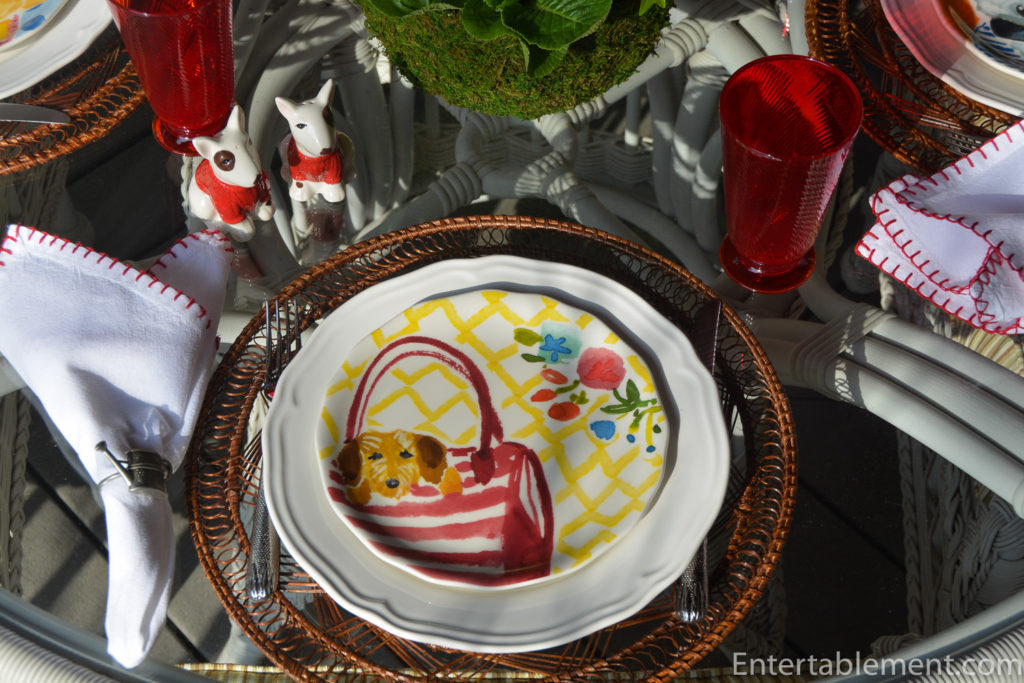 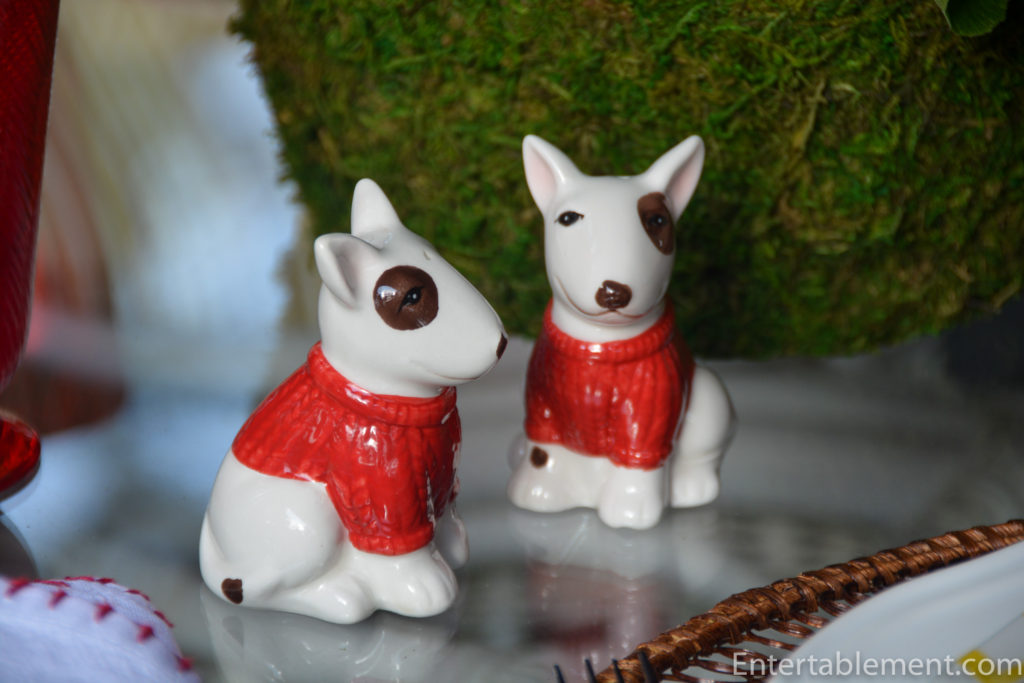 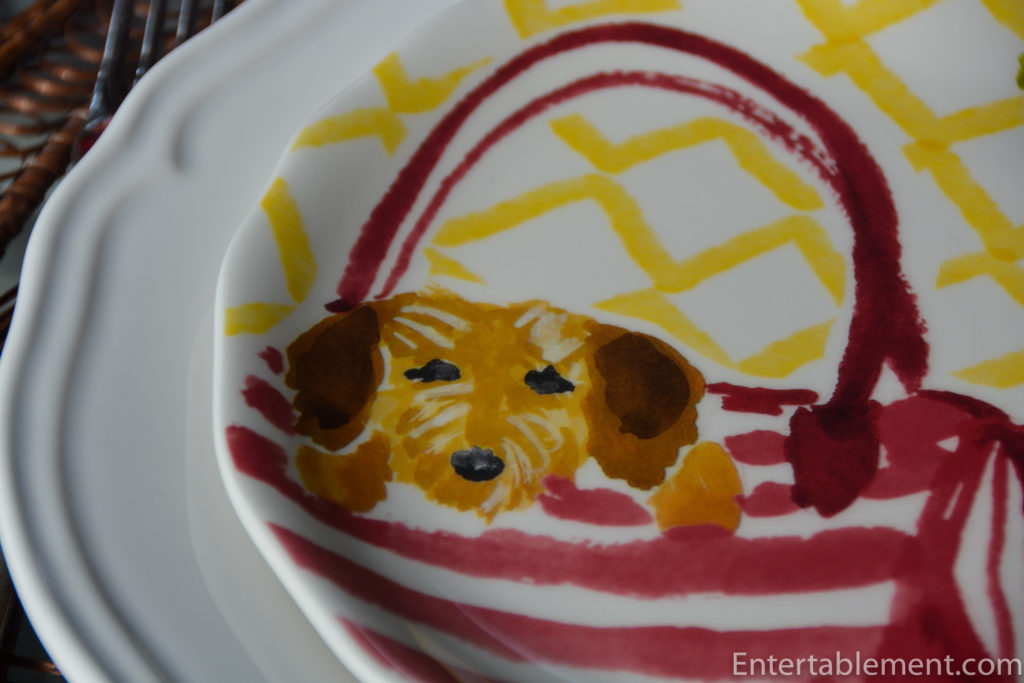 Makes you want to pull up a chair and join in the fun, doesn’t it? 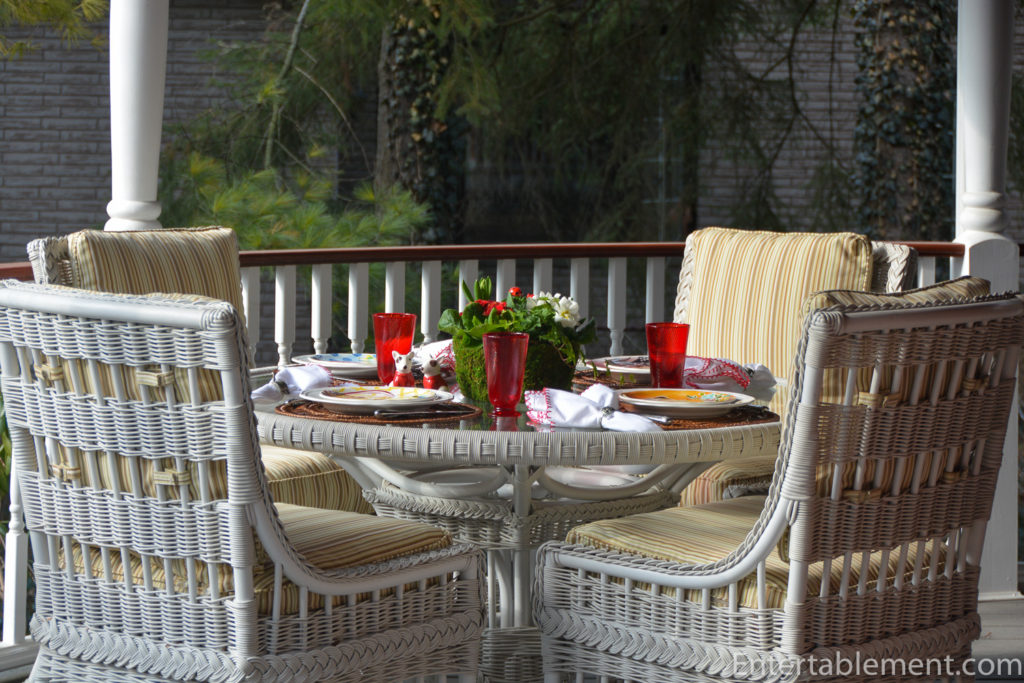 This guy looks a little sad. Why am I in this bag? I’d much rather be running around. 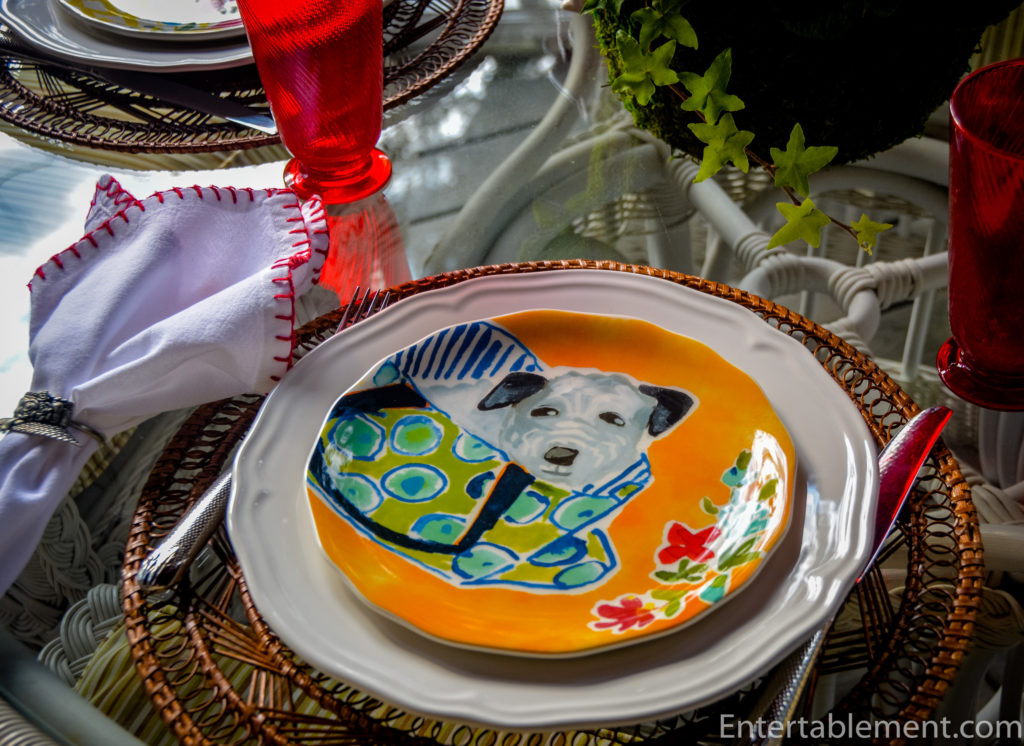 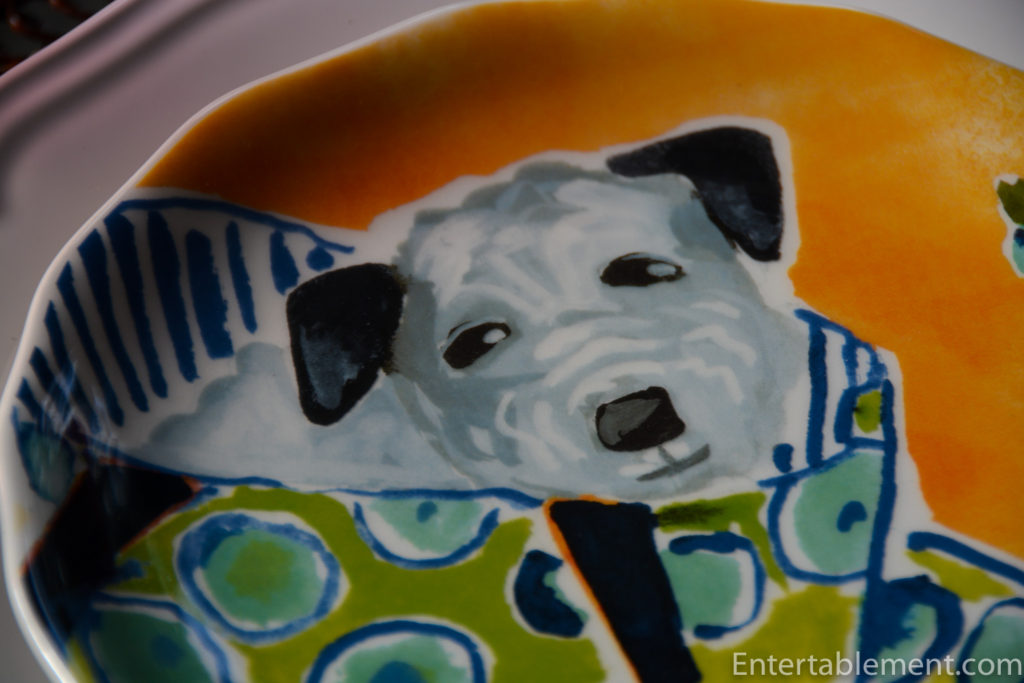 Lots and lots of colour. From the plates themselves to the bright red water glasses. 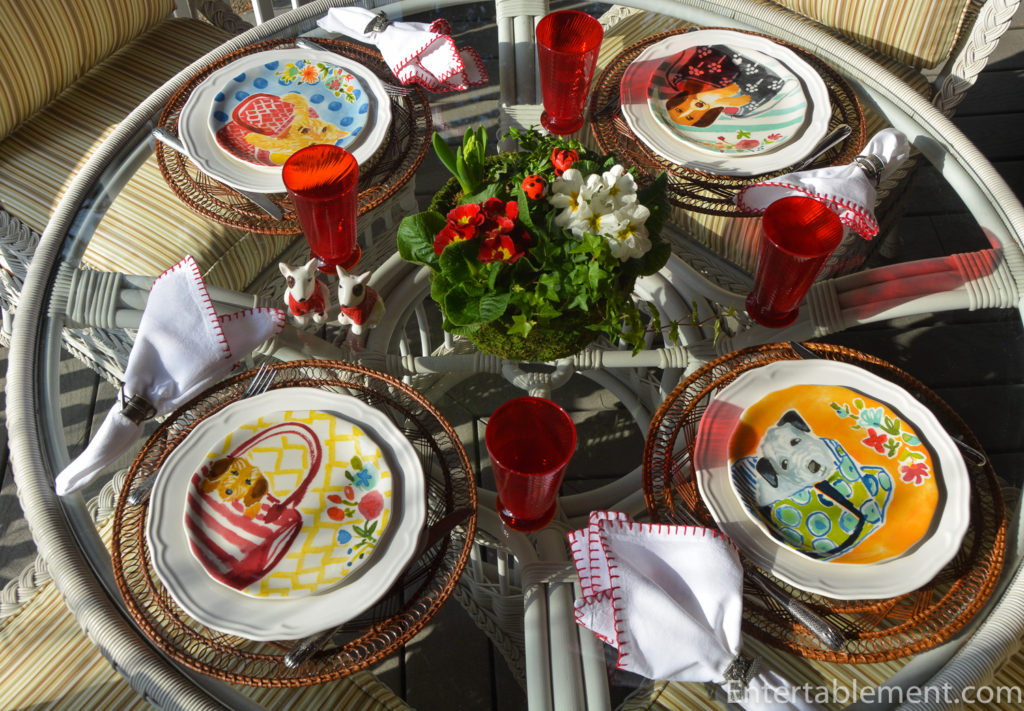 Now discontinued, Arabella by Juliska sport a deep ruby colour and an attractive swirl pattern in the glass. 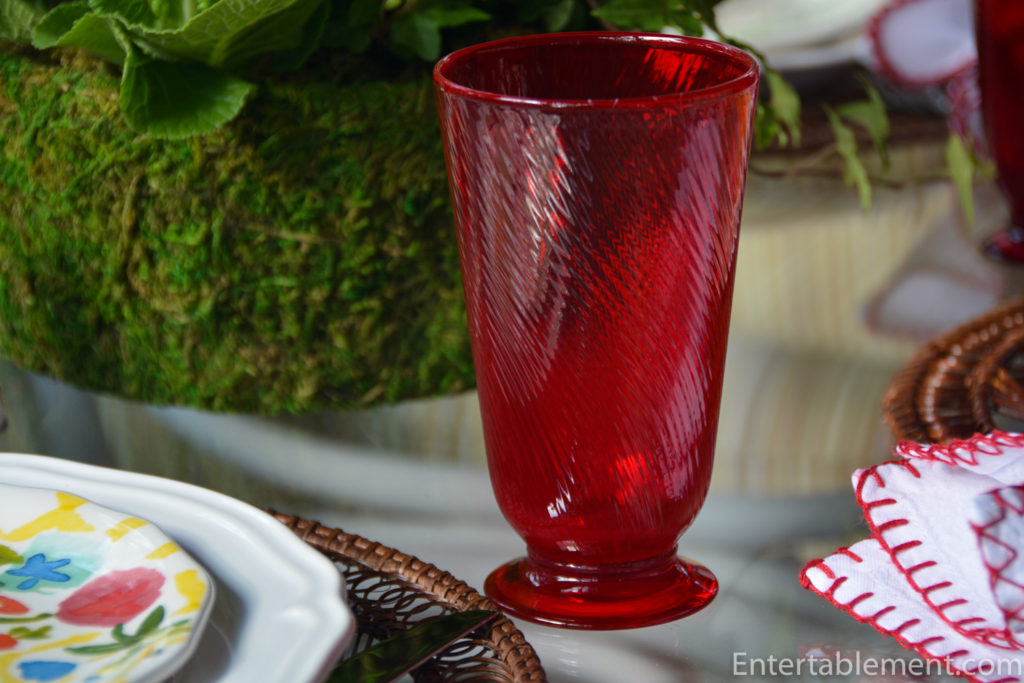 The last plate is a dachshund in a black bag with white stylized flowers (or paw prints on sticks, as one of my granddaughters observed). 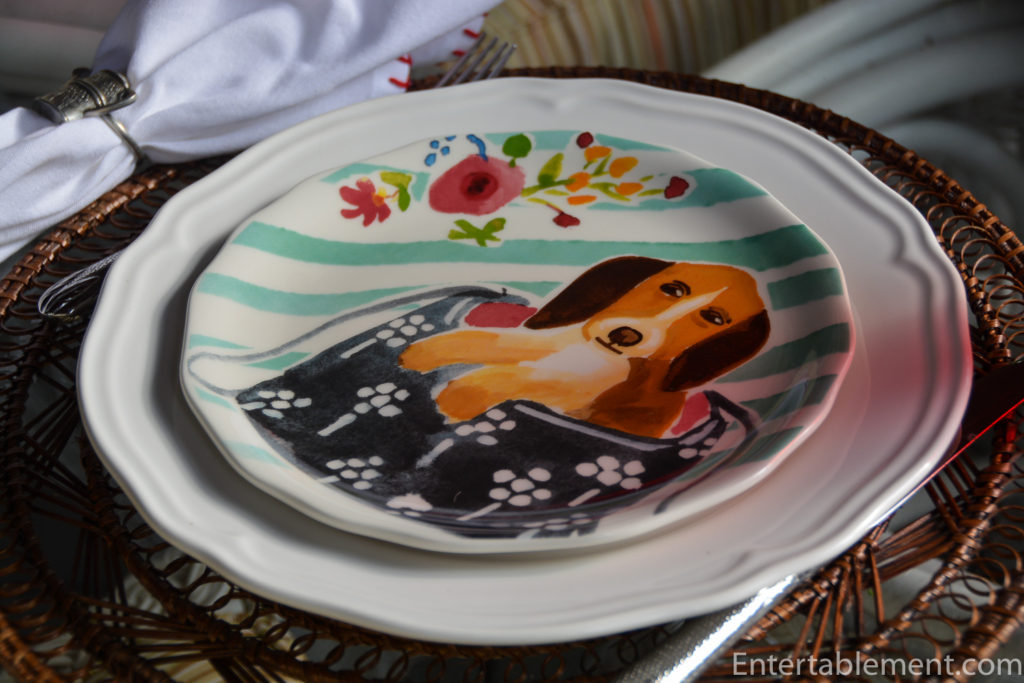 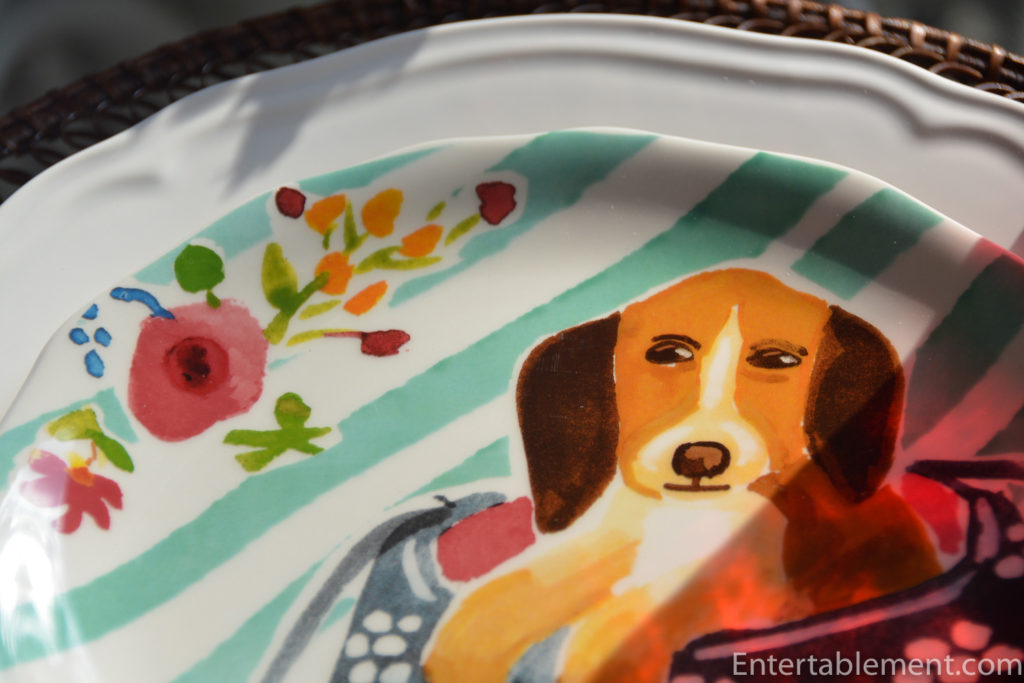 The napkins are from HomeGoods a couple of years ago. I used pewter garden-themed napkin rings, including watering cans, a garden hat and baskets of flowers and apples. Forgot to get a closeup of the napkin rings. Darn. 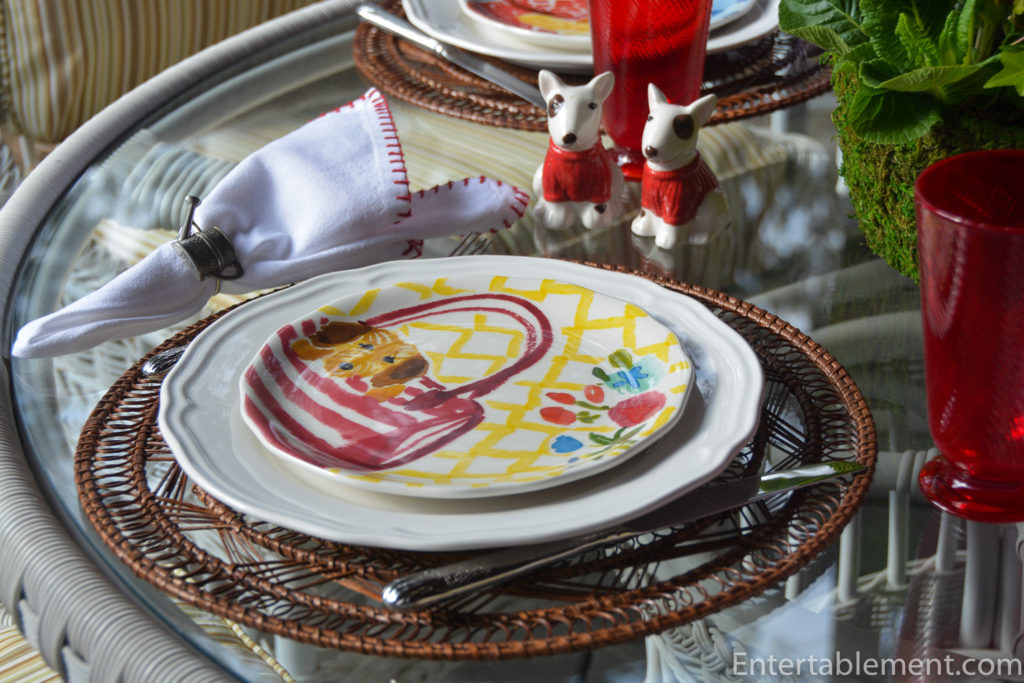 The dinner plates are ARV white from IKEA. I’ve had the placemats for a very long time. I like the light airiness of the perimeter of the placemat; the centre is a solid weave. 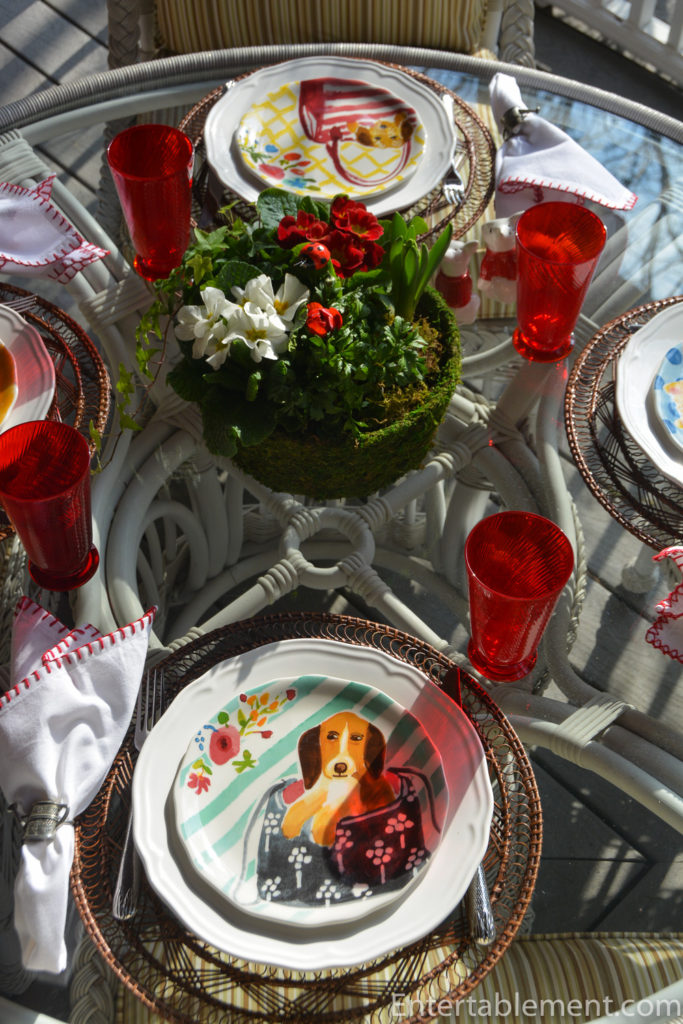 Here is wishing my Canadian friends a safe and happy Victoria Day weekend. This long weekend marks the beginning of summer in Canada where people typically open their cottages and attend firework displays to mark Queen Victoria’s birthday (often in winter jackets, I recall from my childhood). It’s also known as the May “2 – 4” weekend, originally referring to the date of Queen Victoria’s birthday on May 24, but also referencing the Canadian case of 24 beer, which is known as a “2 – 4”.  Canadians are very proud of their beer, and I leave you with this video on the differences between Canadian and American beer. It’s a very catchy tune.